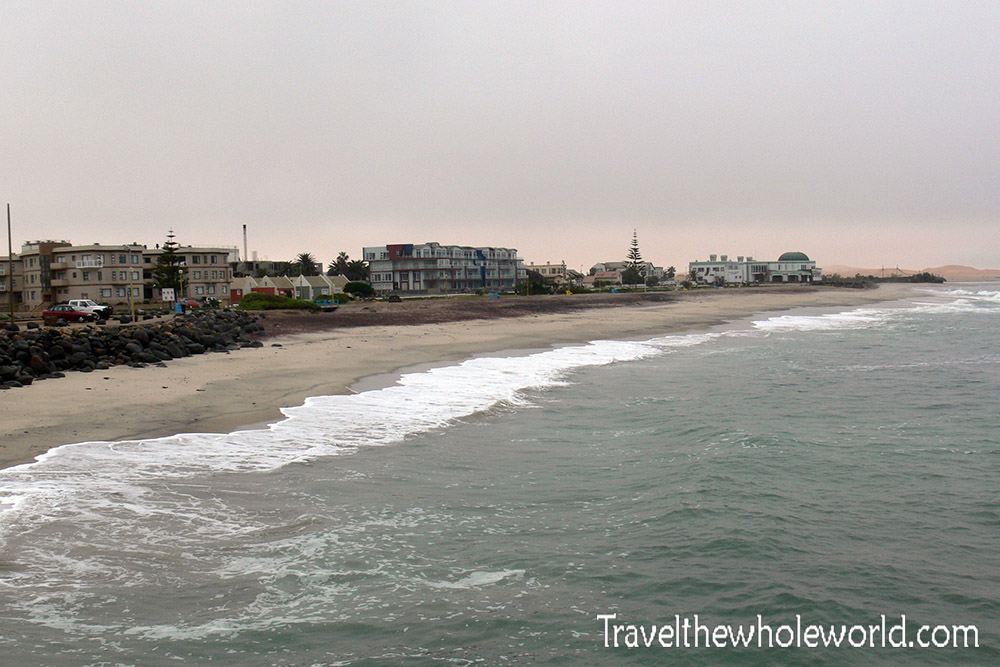 If you read my Namib Deserts page first, you’ll know that much of Namibia’s coast is nothing but hundreds of miles of sand dunes and thick fog. It hardly sounds like an ideal place to build anything. In the center of Namibia’s coast, you’ll actually find one of my favorite cities along Africa’s Atlantic seaboard. Swakopmund was founded by the Germans in 1892 as a harbor for their colony, and eventually grew from a small port to a beautiful coastal city. 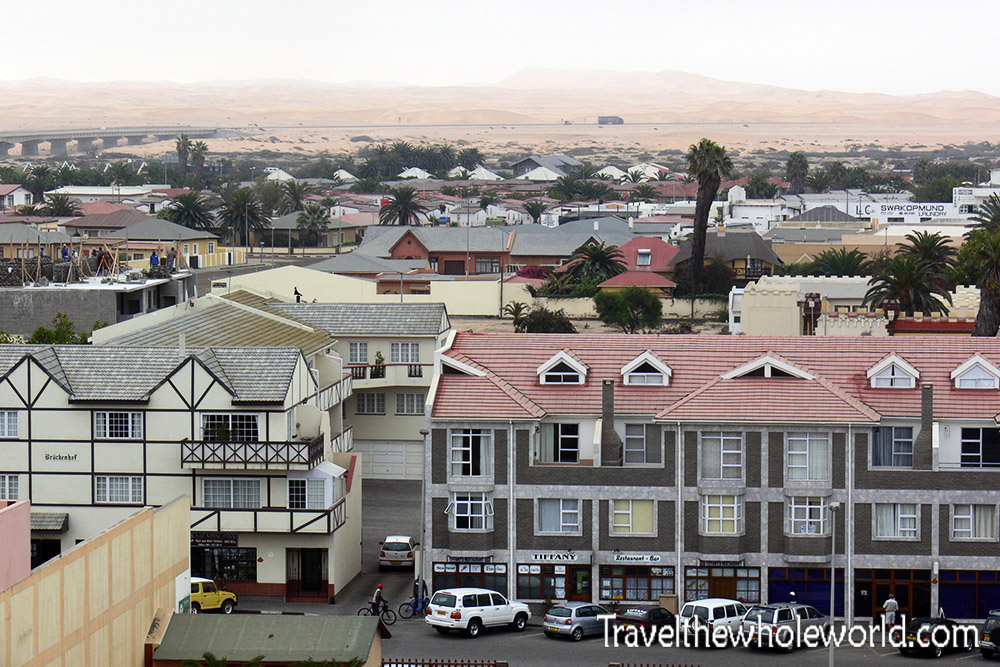 Swakopmund is a strange place if you think about it. Europe is the only desertless continent, so finding a German style city with giant sand dunes in the distance isn’t a place you’d expect in Africa. In the photo above you can see some of the German architecture in the city and where the desert beings in the background. The photo below is of a palm lined path I came across while walking through Swakopmund. 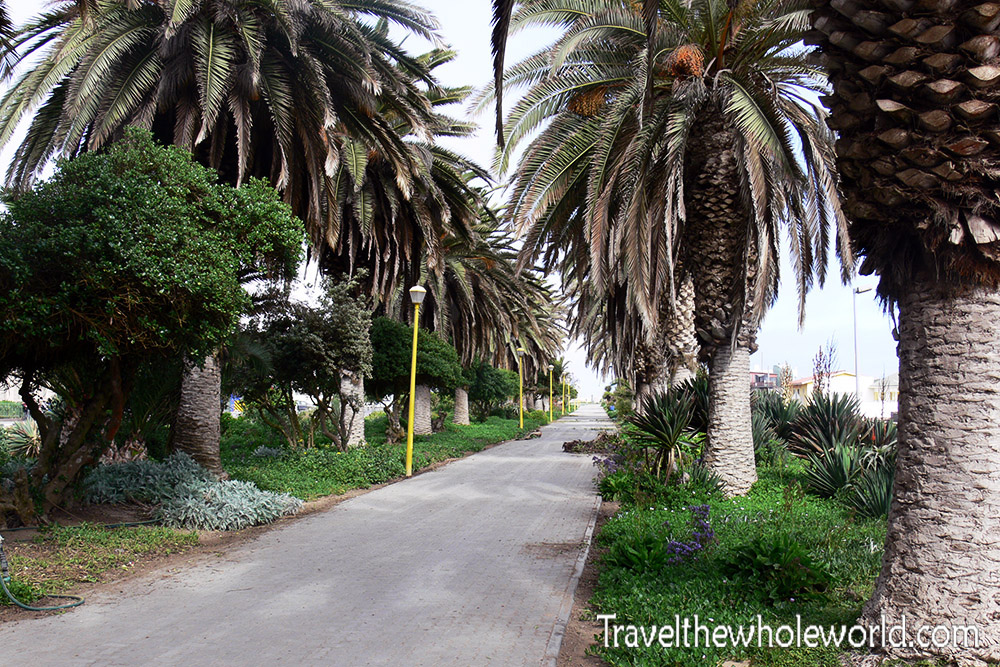 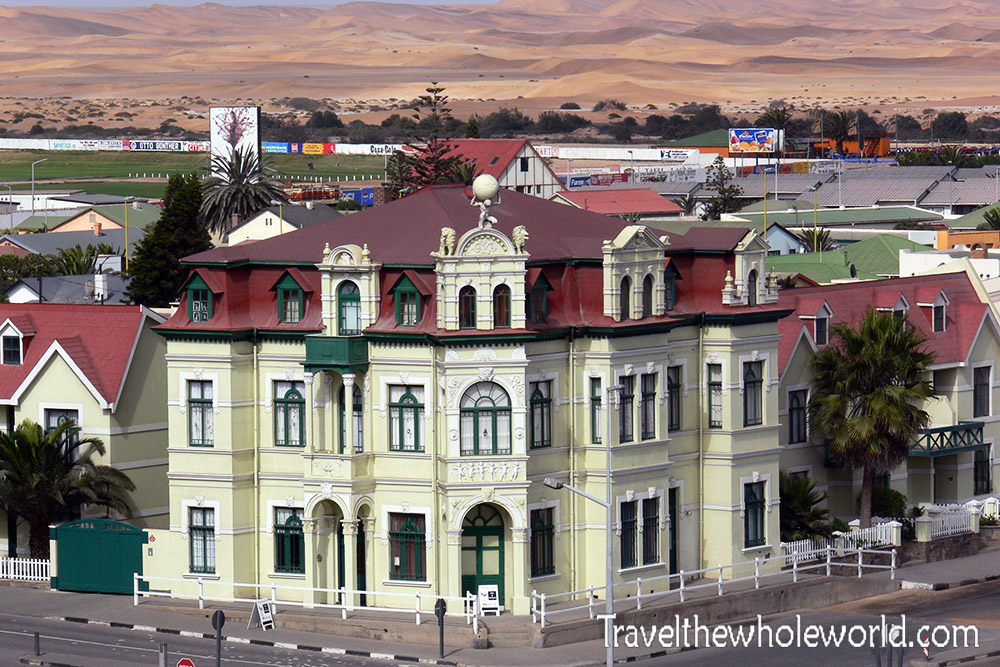 One of the most famous German buildings in Swakopmund is the former Hohenzolle hotel. The building was built in 1905, so was just over 100 years old when I first visited. Its hotel days are over, and it functions as a public administrative building. The Hohenzolle is now a national monument in Namibia. 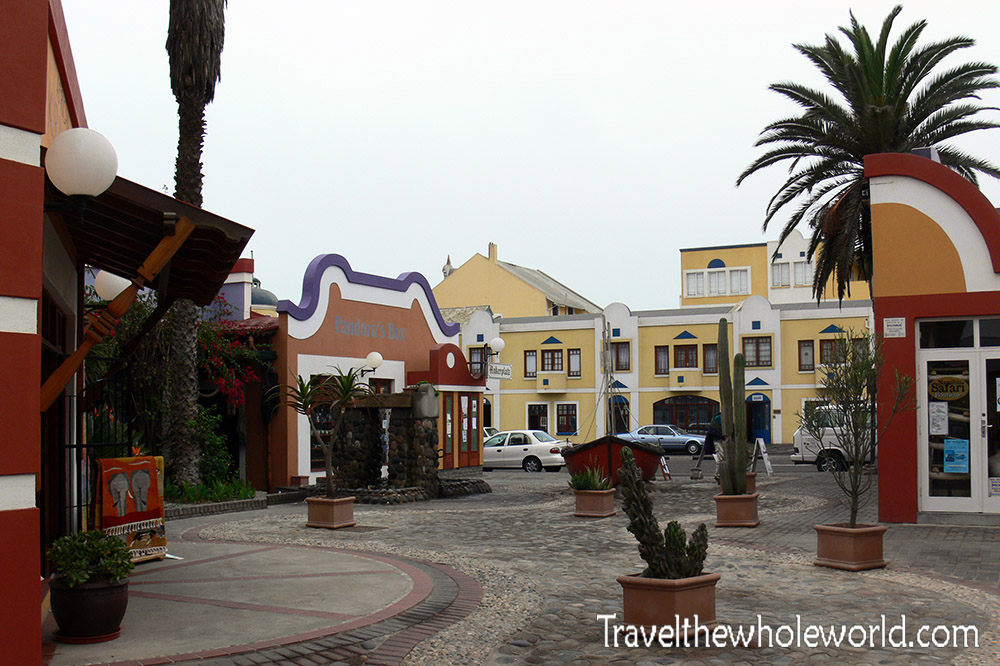 Swakopmund was nothing but a empty sandy beach before the Germans began building their port here. The city today remains a European one culturally. The photo above was taken on a foggy morning showing one of their shopping squares. Below was a clothing store that I had come across while inside one of the city’s malls. It’s definitely easy to forget you’re in Africa while in Swakopmund, and was an unexpected experience for me since I had no real knowledge of the city until I visited. 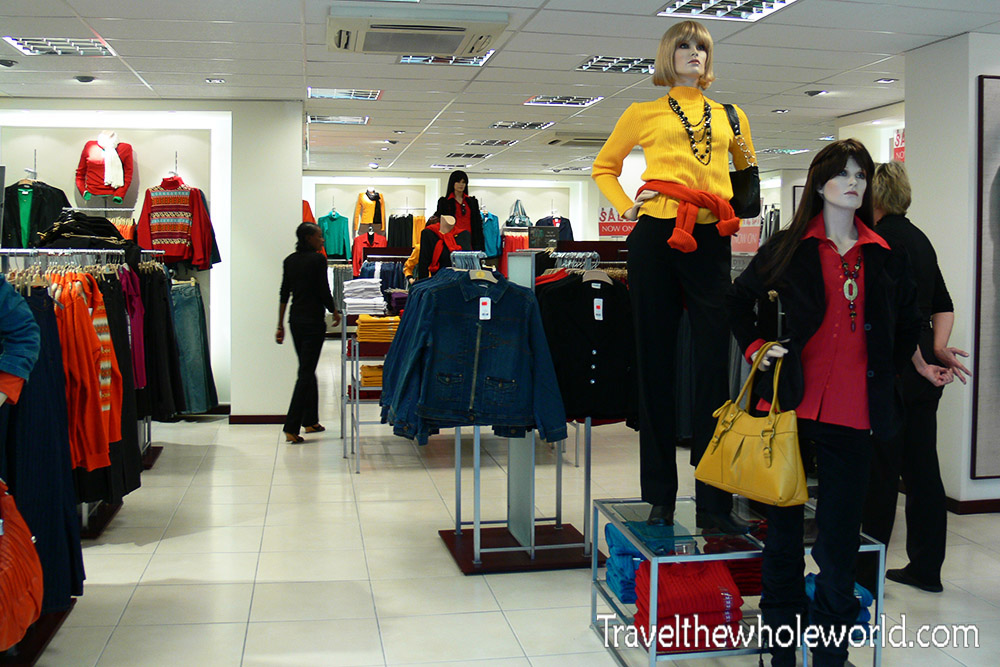 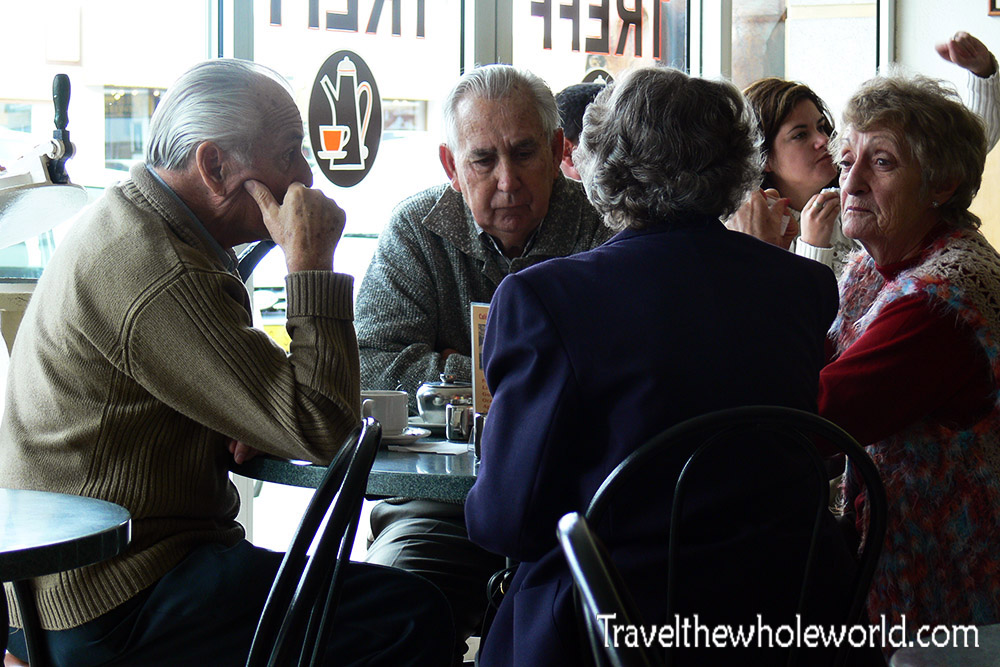 The majority of Swakopmund’s population is made up of those of European decent, or white Namibians as they are called. Germany’s colonial occupation of this territory was relatively short, and the Dutch took over for a much longer period. Although many white Namibians are of German decent, the vast majority are from the Netherlands. In the photo above you can see some white Namibian seniors enjoying tea. Below is an empty but excellent German restaurant that I went to. 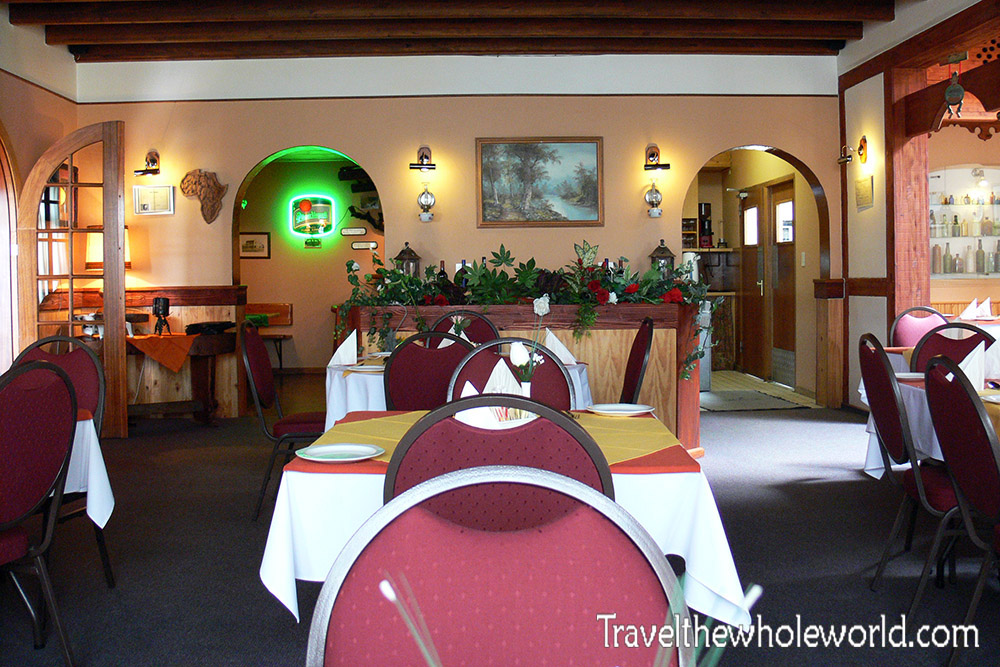 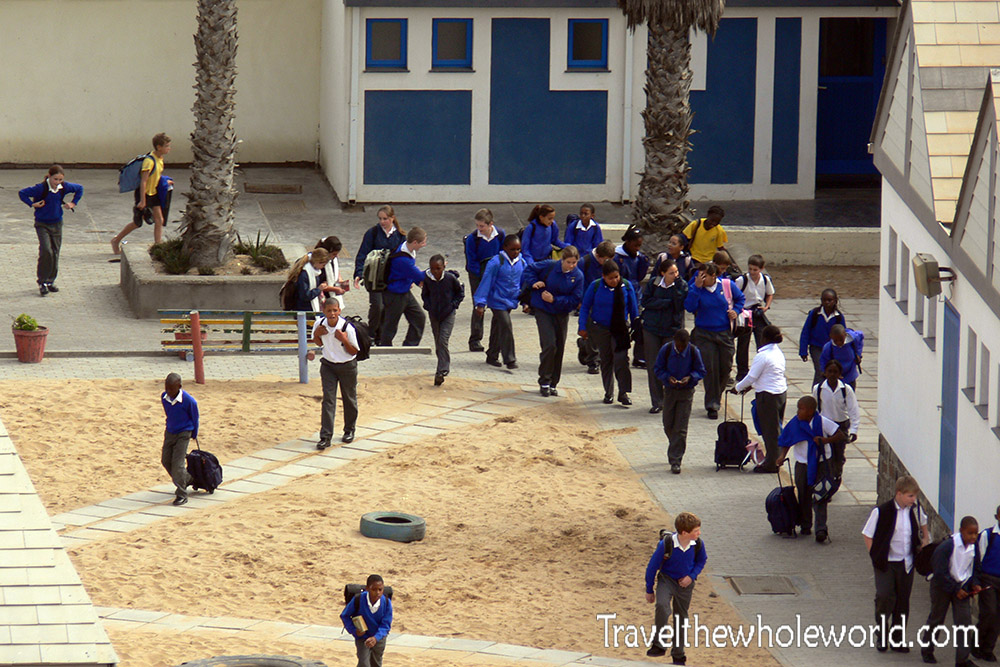 From what I could see there was a normal mix of native Namibians and white Namibians in places like schools or government jobs. The police it seemed were all native Namibian, and actually quite helpful. Later on while doing a solo walk on the beach I came across this local fisherman below. I tried to talk to him but we couldn’t speak because of the language barrier. He was nice enough to let me take his photo though! 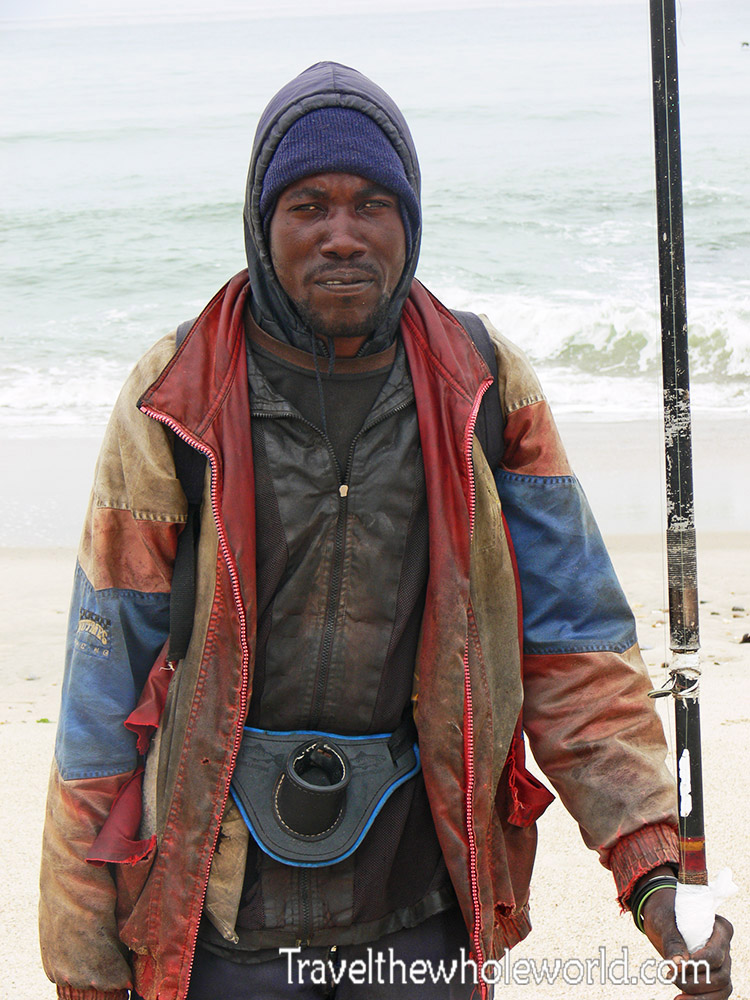 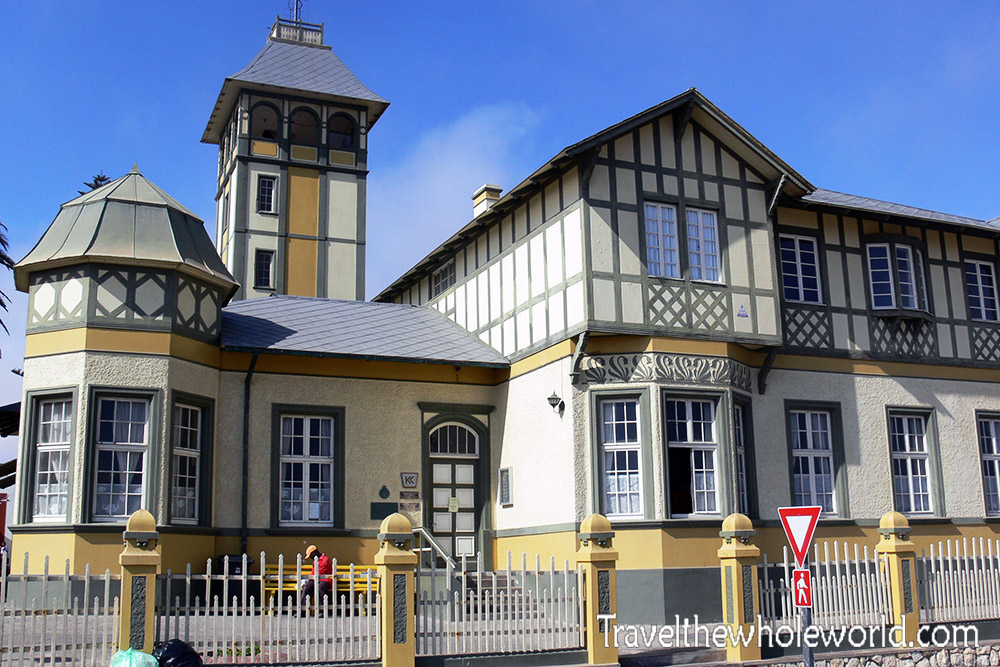 One famous German building in Swakopmund is the Woermann house and tower. I liked this building so much I had to add two photos of it to my site, the overall building above and a shot focusing on its tower below. The Woermann was built in 1894 and had several uses over the past 100 years. Initially the tower helped guide ships in the area as sort of a lighthouse. When Namibia the Germans left and the Dutch took over it became a hostel for schoolchildren. Most recently it became both a library and an art center. 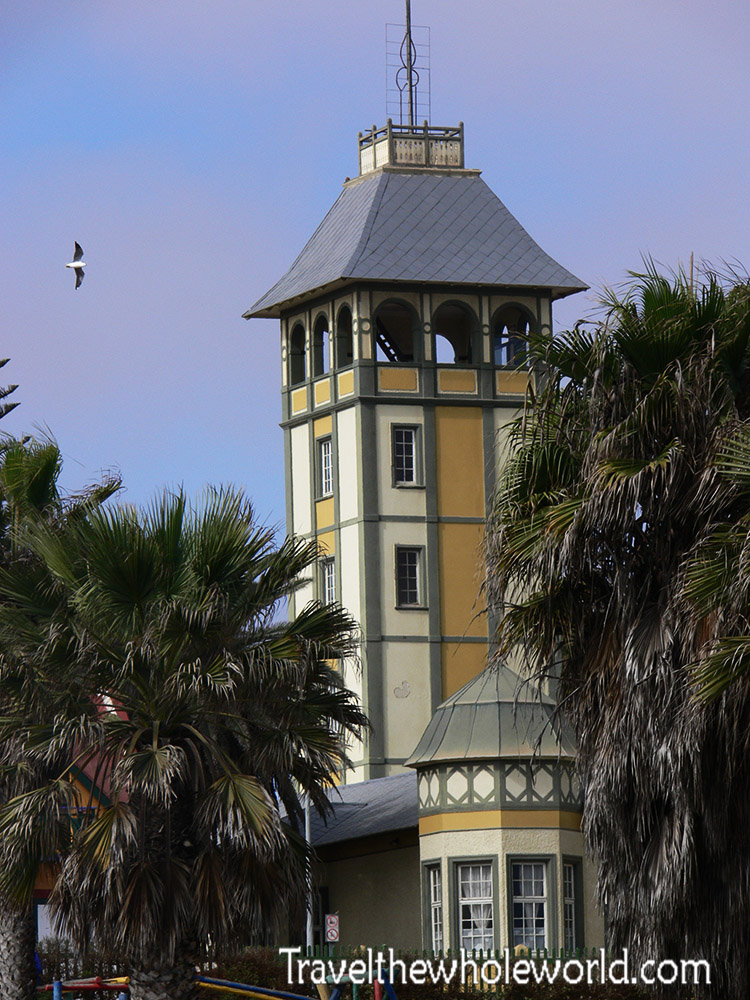 Since the building is open to the public, you can even climb the tower stairs and get a view of the city. It’s probably the best place in Swakopmund to see the coast and city center. The door to the tower remains locked at all times, but a local shopkeeper or librarian can give you the key. This shopkeeper below handed over the key to me after some conversation about the city and Namibia. 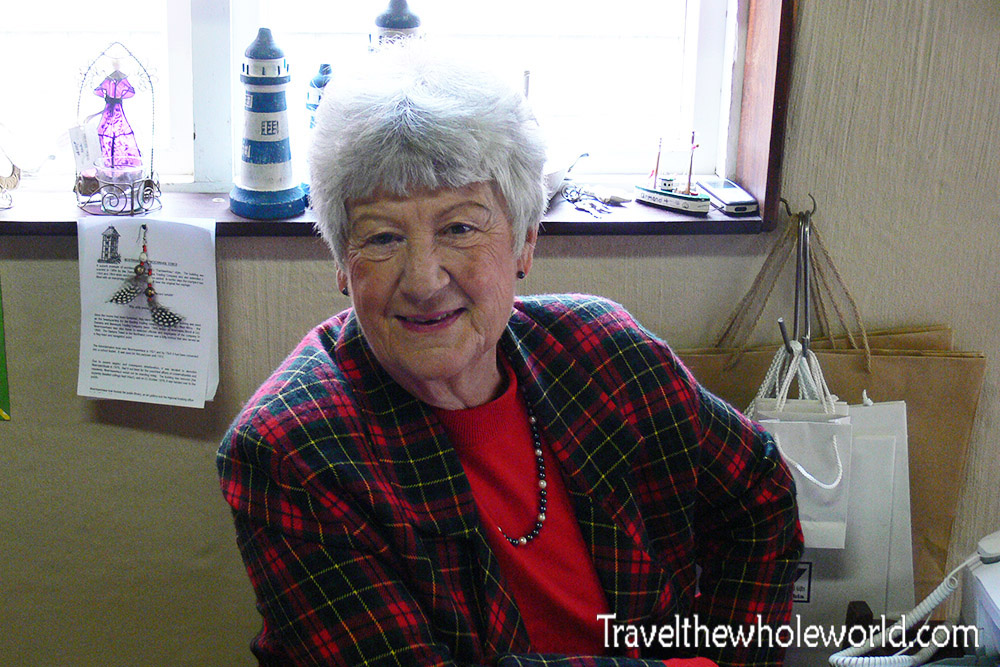 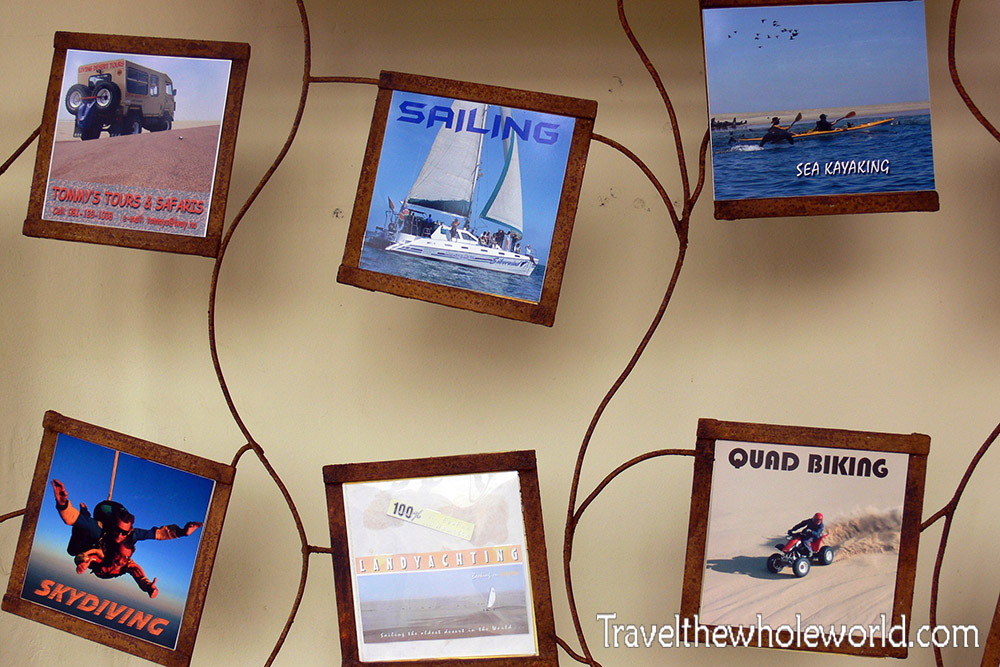 There are a lot of activities that can be arranged in Swakopmund. It was here that I organized my trip back out to the desert from a flight while the excursion to Etosha National Park I arranged there. The photo above shows some of the advertisements for adventures in the Swakopmund area. I didn’t do any of those activities above, but if I had to choose, sailing or kayaking would have been the most interesting for me. The coast can be a dangerous place with the thick for for large ships. Below is a photo of an old ship wreck that has probably been off Swakopmund’s coast for decades! 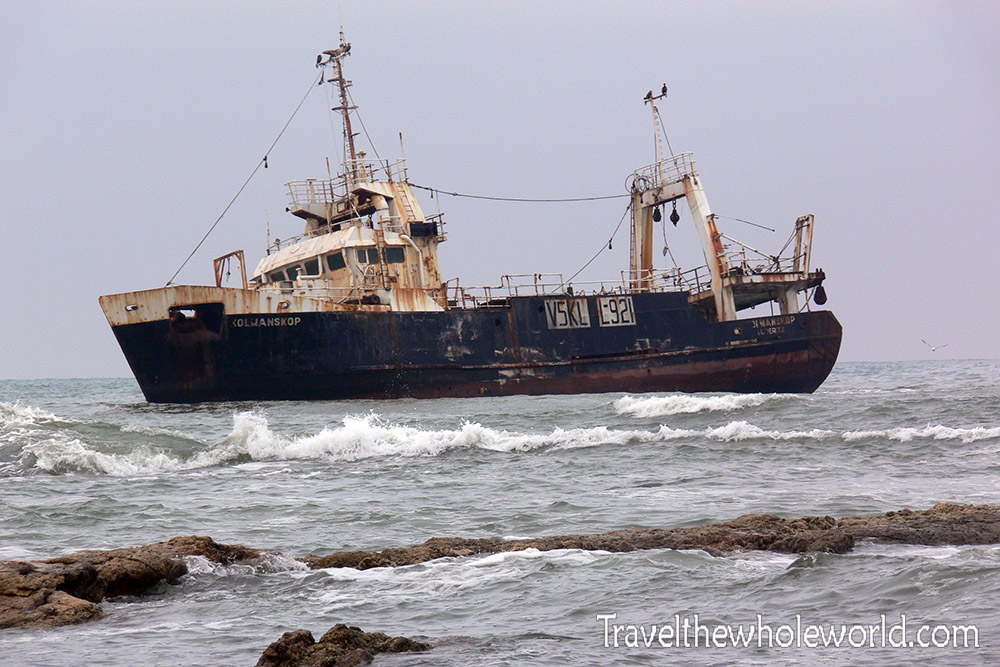 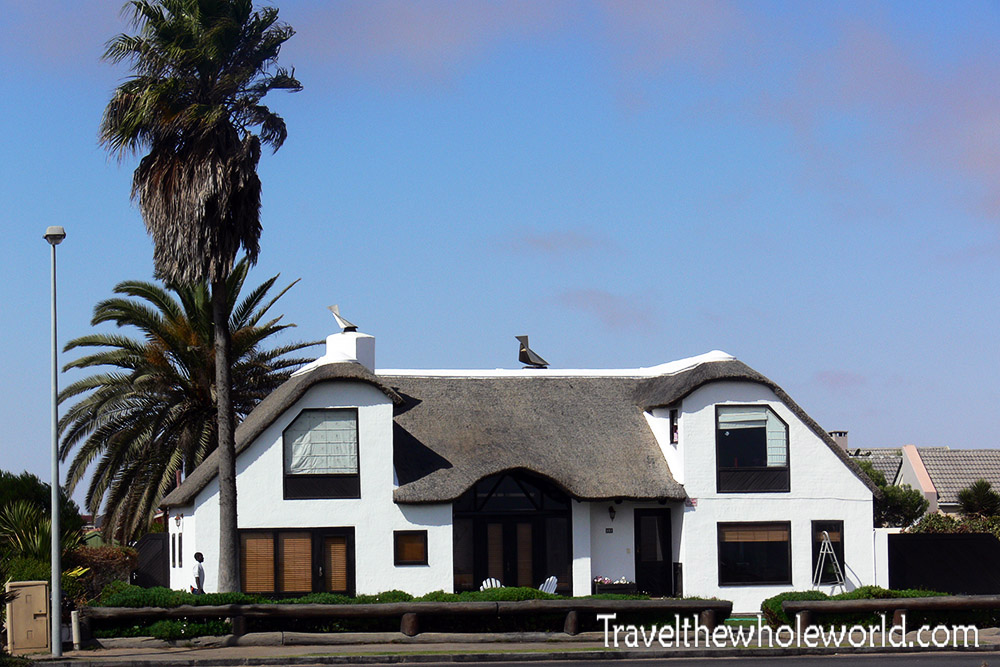 These last two photos are actually from the nearby coastal city of Walvis Bay. Walvis Bay was founded by the English,
but it’s not even 30 minutes away so visiting Swakopmund and Walvis Bay is almost one in the same. I should have done more here, but my focus had been in Swakopmund. I did do some more exploring on foot like usual, and passed by some of these expensive beach houses along the coast. In Walvis Bay there was also lots of coastal lakes that had flamingos. These guys were used to people so I was able to walk right up to them without them caring! 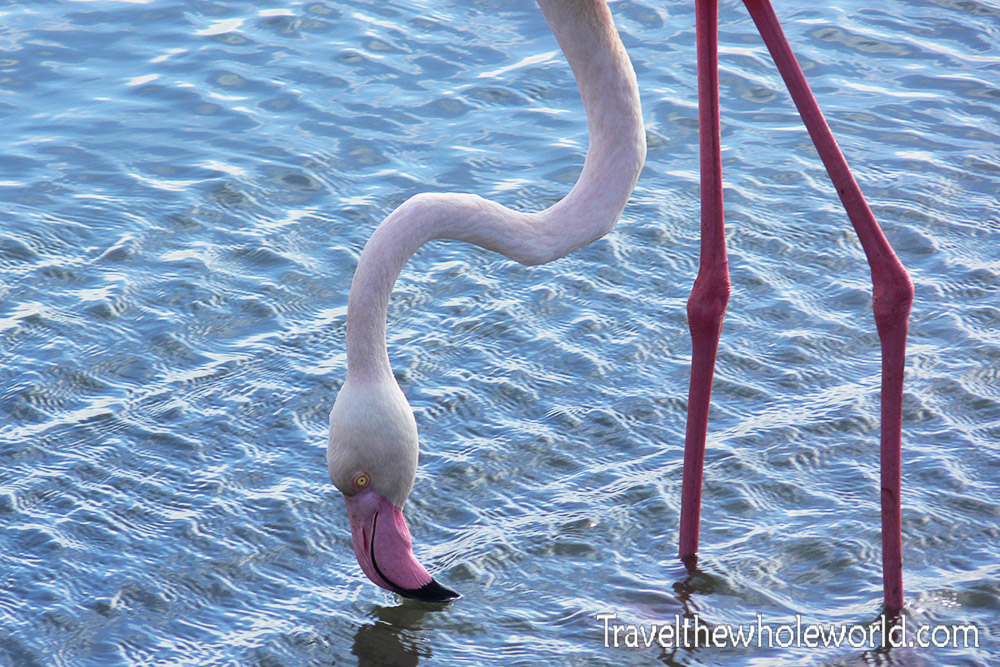