Hike to Base Camp

Hike to Aconcagua’s Base Camp 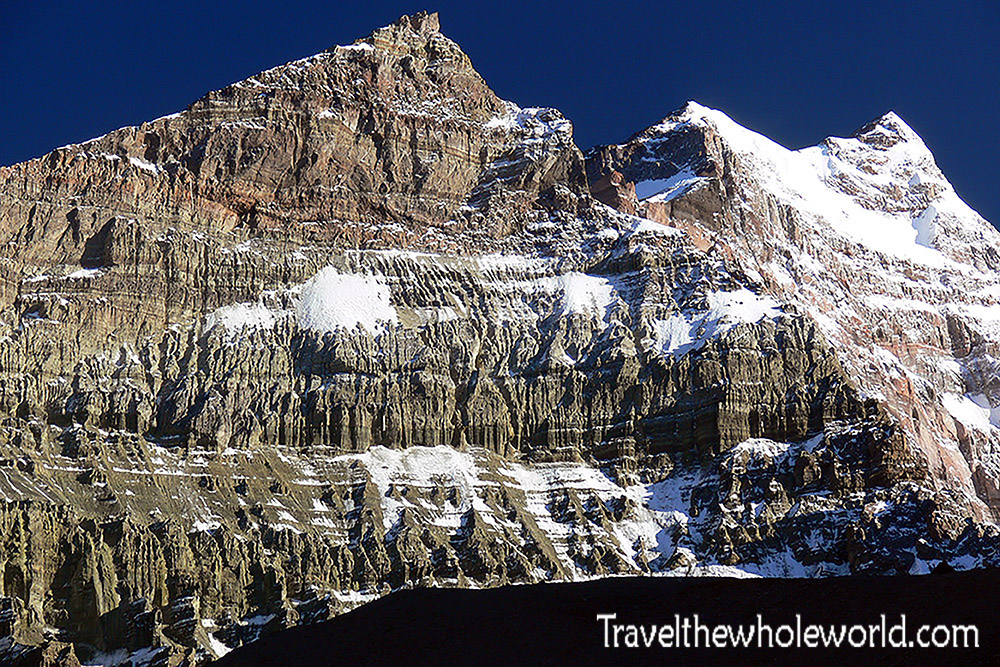 After reaching Camp Confluencia it was important for us to rest and acclimatize before moving higher to base camp. On Day 2 we had another enjoyable hike that took us over 13,000 feet (4,000 meters) to help our bodies get used to the altitude. Above is a photo of a large mountain where an Inca mummy had recently been discovered. 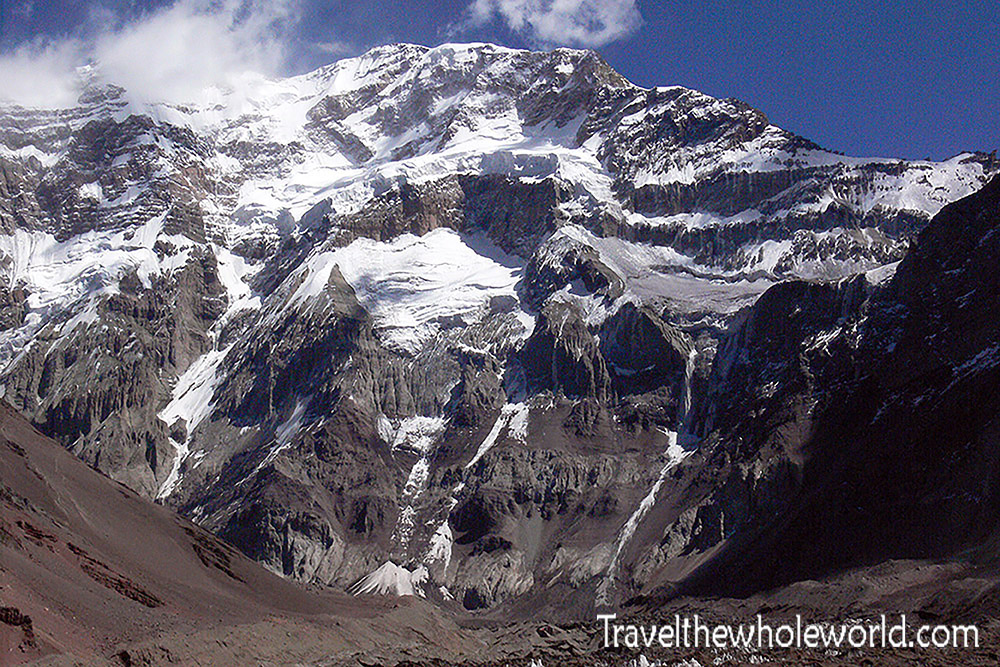 This phone above shows an acclimatization hike we did to Aconcagua’s south face. This is by the far the most difficult, dangerous, and technically challenging route up the mountain! As one of the most dangerous climbs in the hemisphere, only a handful of people attempt it each year. We certainly did not plan on taking this route, but seeing the dramatic side of the mountain was breathtaking. 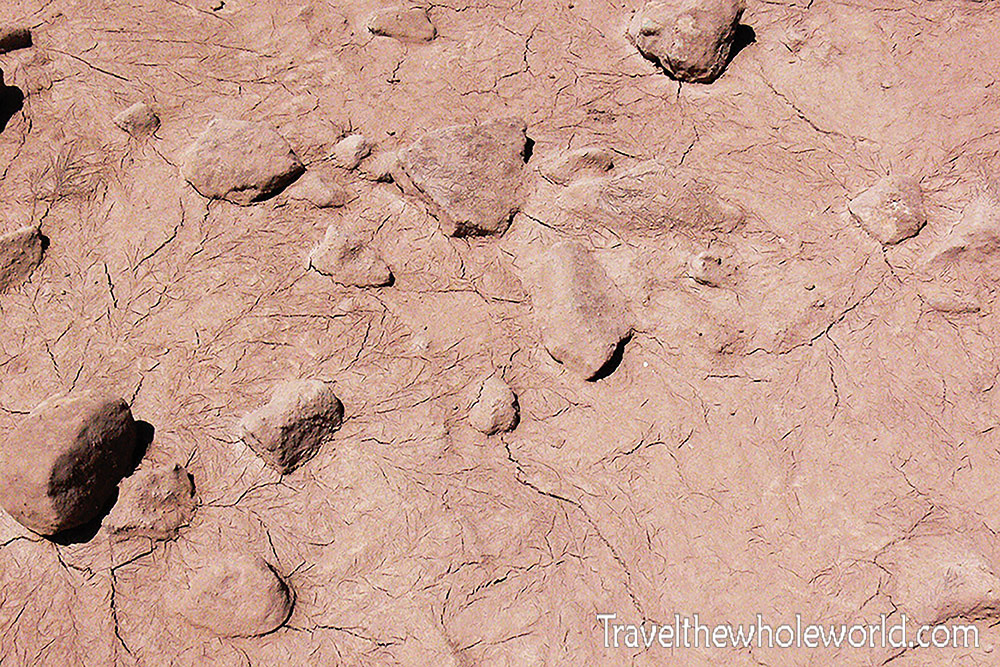 Like some of the earlier hikes on Aconcagua, there were several boring scenes as well. Above and below you can see lots of mud and mounds of dirt. Some of it was beautiful in its own way, while some parts seriously looked as if earth moving equipment had been used to dig up the terrain rather than this all being nature’s work! 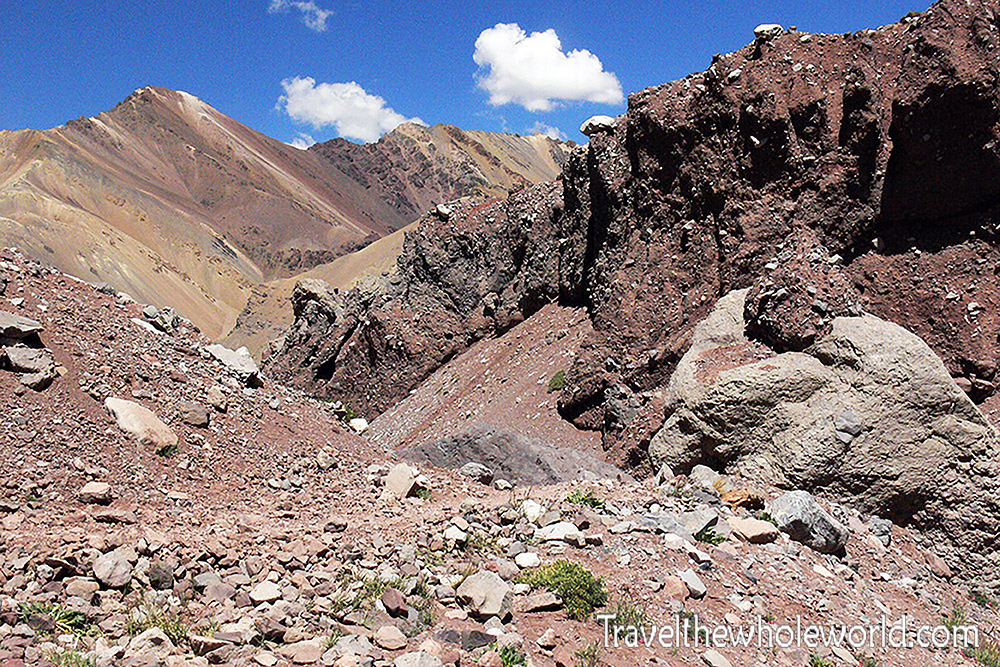 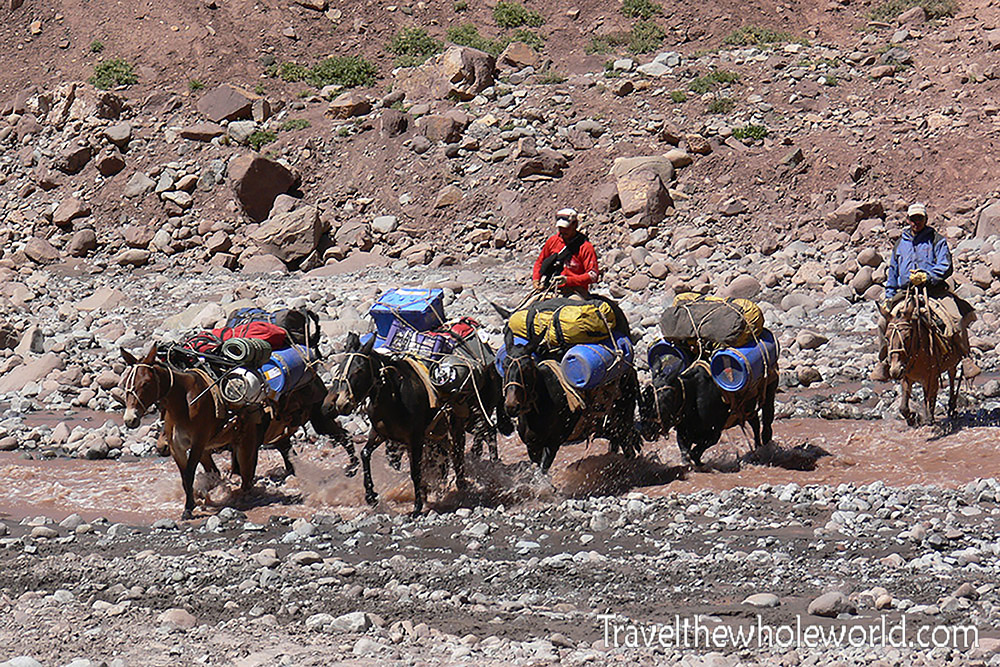 After two nights in Confluencia or on Day 3, it was time for us to move on to base camp. The trek to base camp from here was long and took roughly eight hours. With the exception of the final hour, most of the terrain we covered was pretty flat. During the trek I spotted several mules that were carrying supplies crossing a river. For a $100 you can get the mules to carry your climbing gear from the beginning of the park entrance all the way to base camp. That saves three days of having to carry a heavy backpack and was an easy decision for all of us! Above are some mules crossing a small river, below is one of their fallen comrades. 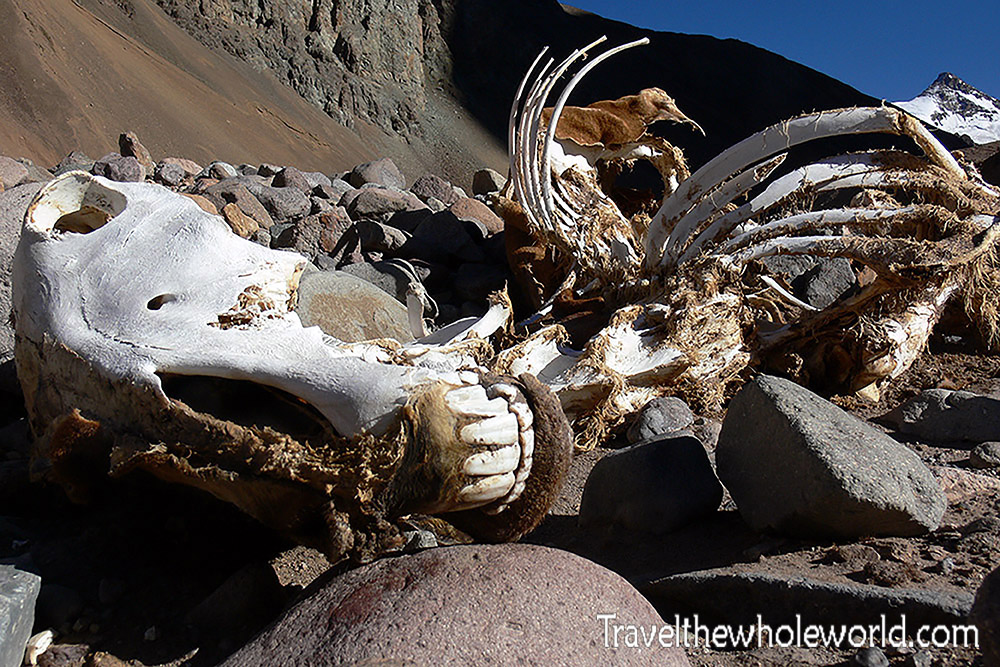 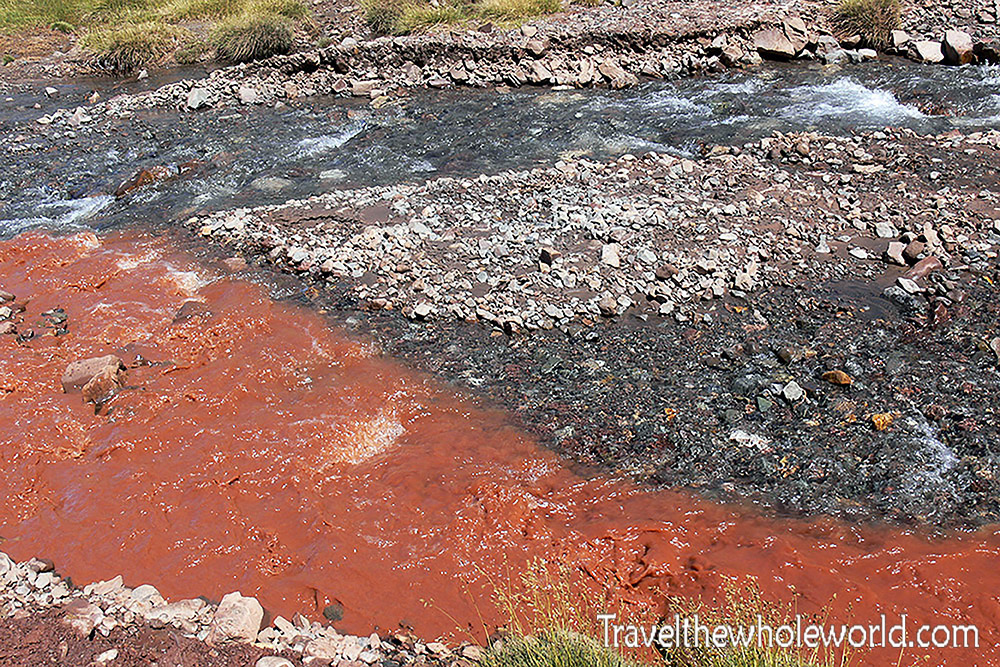 On the way to base camp we were surrounded by high mountains on both sides. We had also been hiking parallel to a stream that we occasionally had to cross here and there. Sometimes the creeks here can swell up and make an annoying hurdle on your way to base camp. For us, they were pretty low and nothing that we couldn’t jump over. These streams were for the most part pretty clear, and this is where we actually got our drinking water from. Because of the high elevation here, I didn’t even have to purify my water! You can see some of the streams coming in are muddy like this one photographed above. 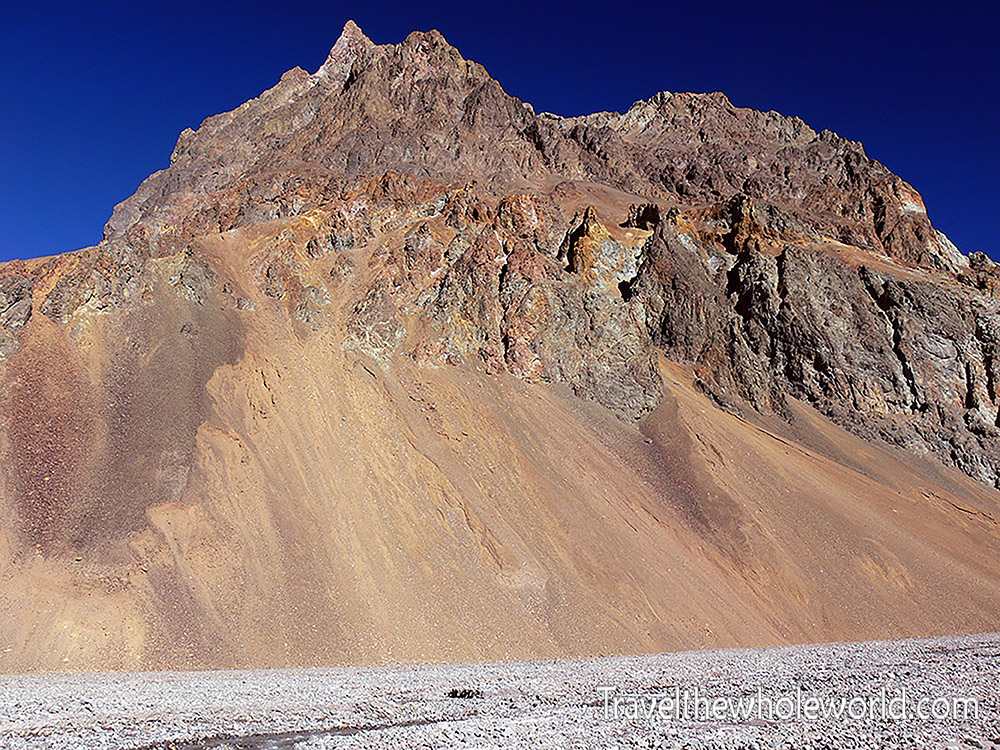 After about four hours we had lunch at El Dedo seen above. El Dedo means the finger in Spanish and marks the halfway point between Camp Confluencia and Base Camp. Knowing that we were half way we used El Dedo as a resting point to stop for lunch. 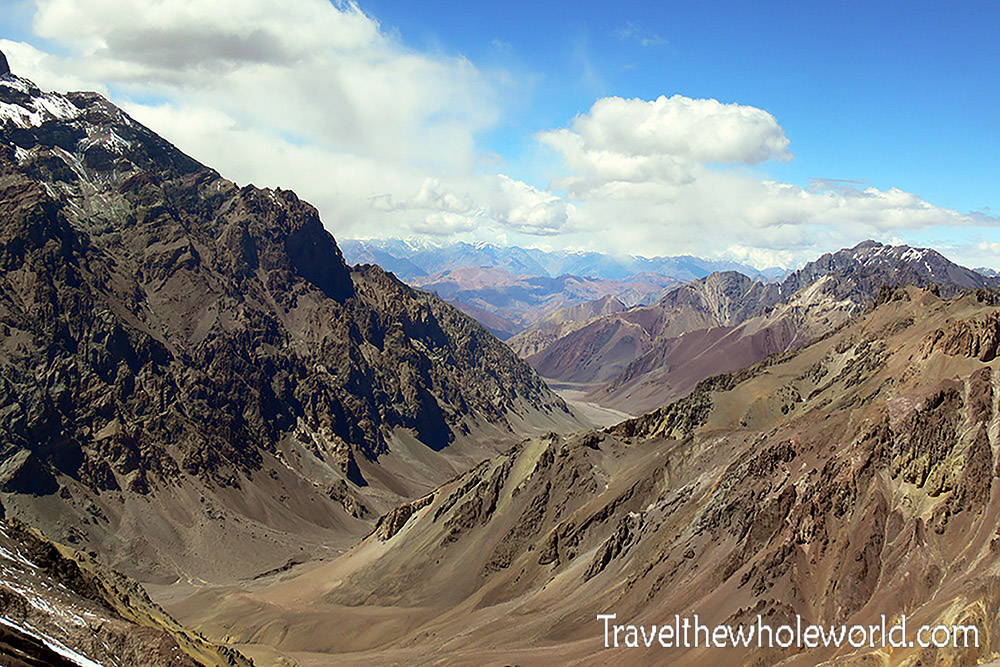 The remaining four hours to base camp were similar to the first four. The only exception was the final ascent into base camp. This required hiking up an extremely steep hill before reaching camp at 14,000 feet (4,300 meters). To put things into perspective, reaching base camp would put us at the same altitude of the highest peaks of the continental United States, equal to mountains like Rainier and half a vertical mile higher than Mt. Fuji. The weather was still pretty warm, but as we weren’t yet adjusted to this altitude and the sudden steep terrain, the hill was our biggest challenge so far. One of the climbers on the trip claimed that the hill alone had seriously been more difficult than Kilimanjaro although myself and others who had done that mountain thought that was an insane comparison! At base camp, we were here to rest for several days and let our bodies catch up to the thin air. Above are views looking back on the Horcones valley. This photo was taken February 18th, while the photo below was was taken as I began my hike out of Aconcagua on the 1st of March. 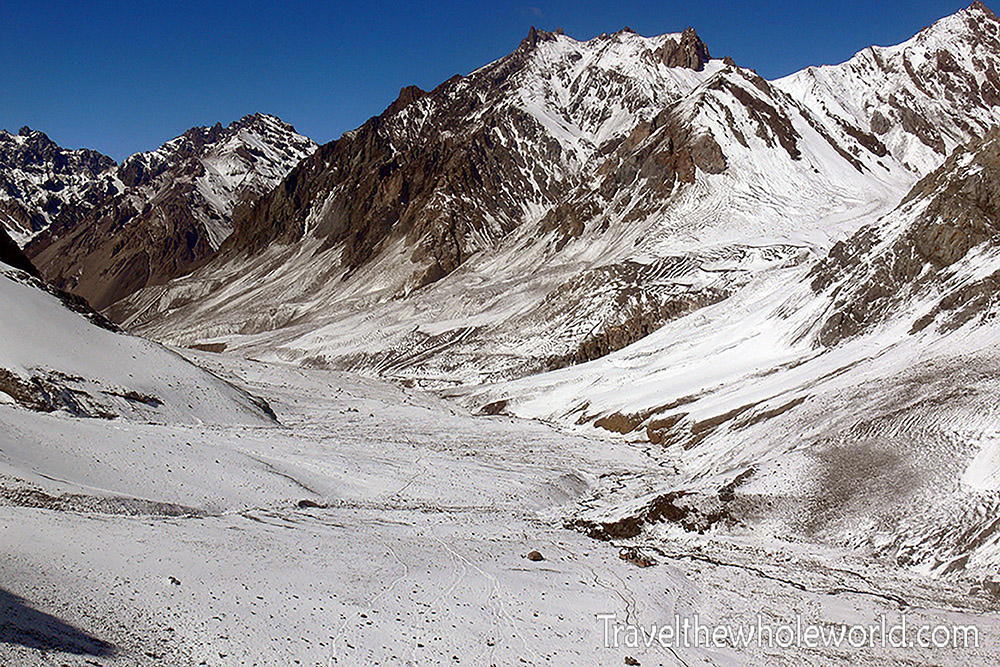 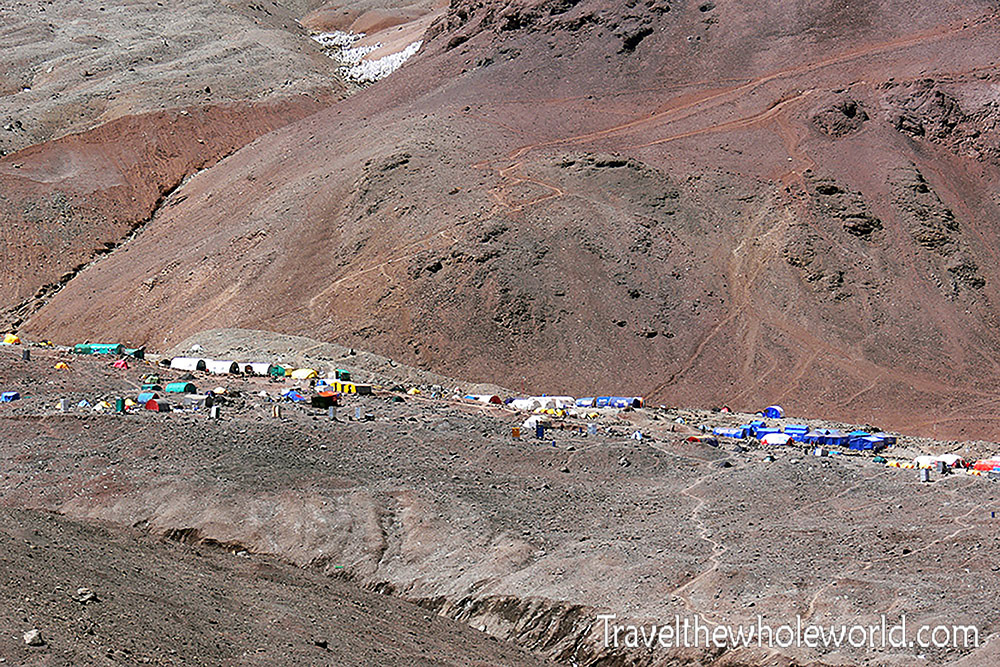 After arriving to base camp, we had a rest day and then went back to our acclimitization hikes. We started with a peak that was over 16,000 feet (5,000 meters. From here we got a great view of base camp. The camp is the second largest base camp in the world after Mt. Everest. Apparently it was much smaller by the time we arrived, as we were the last expedition of the season. 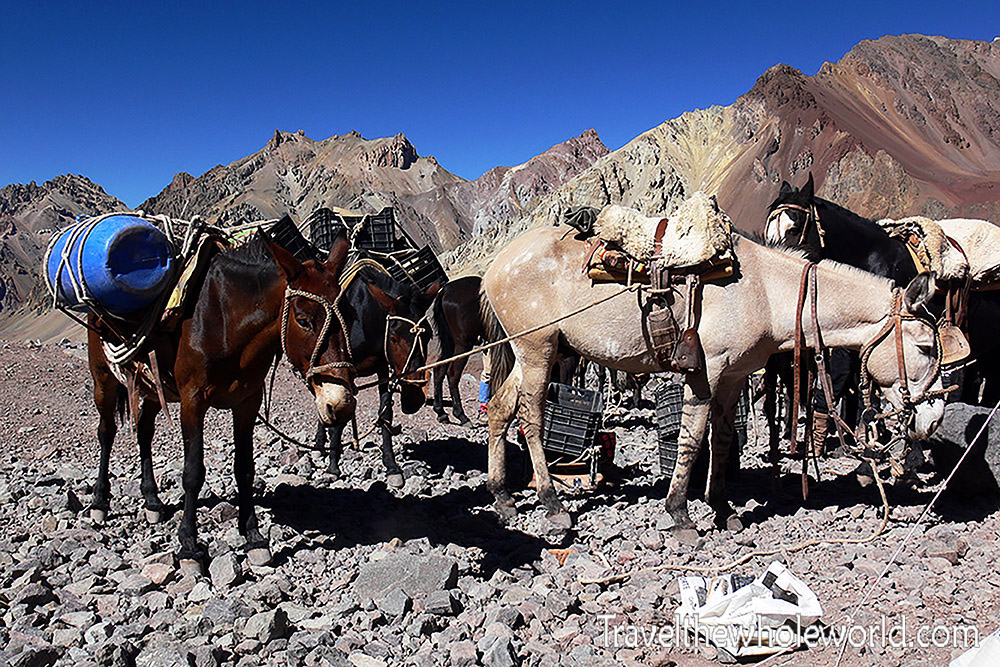 The name of base camp is Plaza de mulas which means Plaza of Mules in Spanish. The name makes sense, as the mules are the lifeline for getting supplies here. Above is a pack who have just arrived to base camp with their gear. Apparently the mules work a single day and then get a mandatory two days off. Their life might not be so bad after all! 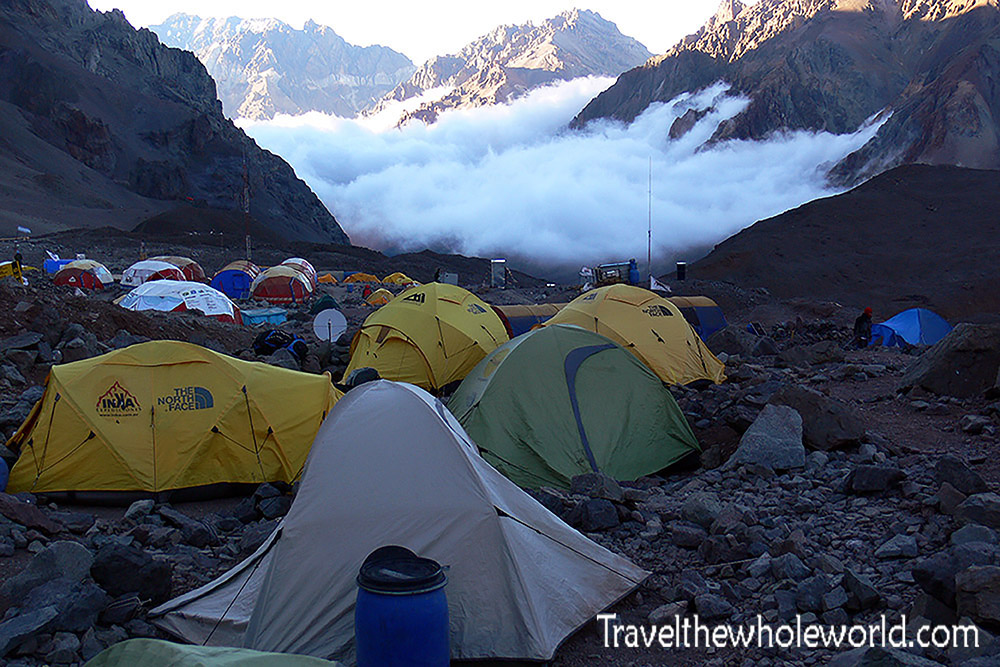 Now that we were settled in base camp we did our best to try to relax and continue to acclimatize. On the left are tents from my climbing partners. Here we each had our own tent, which does lots for moral! Because strong winds can bring in random temperatures quickly up and down a mountain the weather can be hard to predict. The green tent in the center of the picture is mine and you can see the clouds slowly rolling in the background. 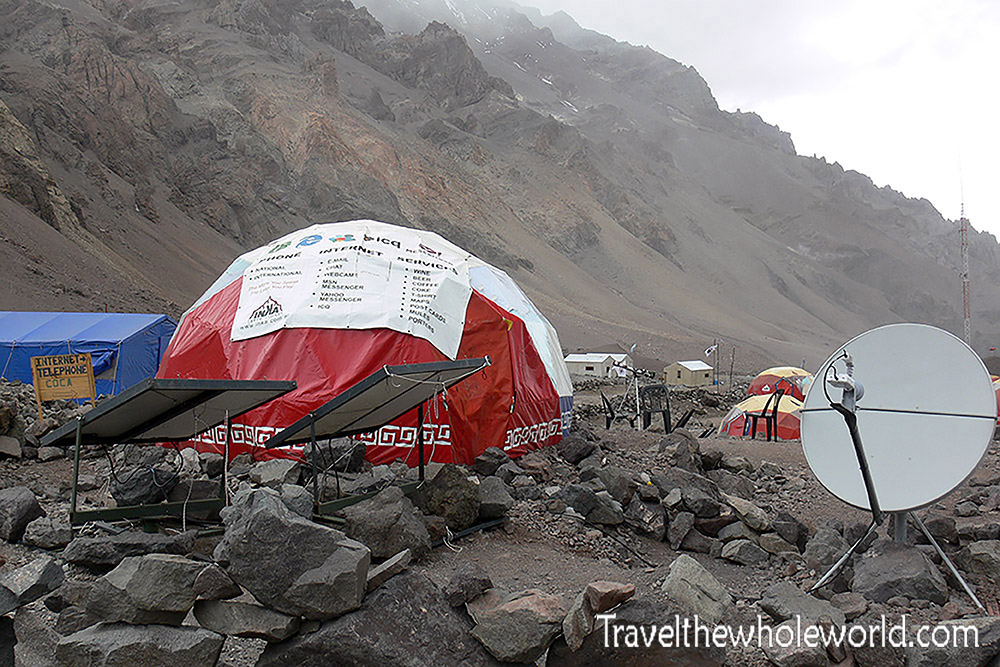 Internet was something I didn’t expect to find here. It’s extremely expensive and for those that want to communicate to the rest of the world it’s available. I didn’t use it myself, but it made a lot of people happy to be able to talk with their family and friends back home. 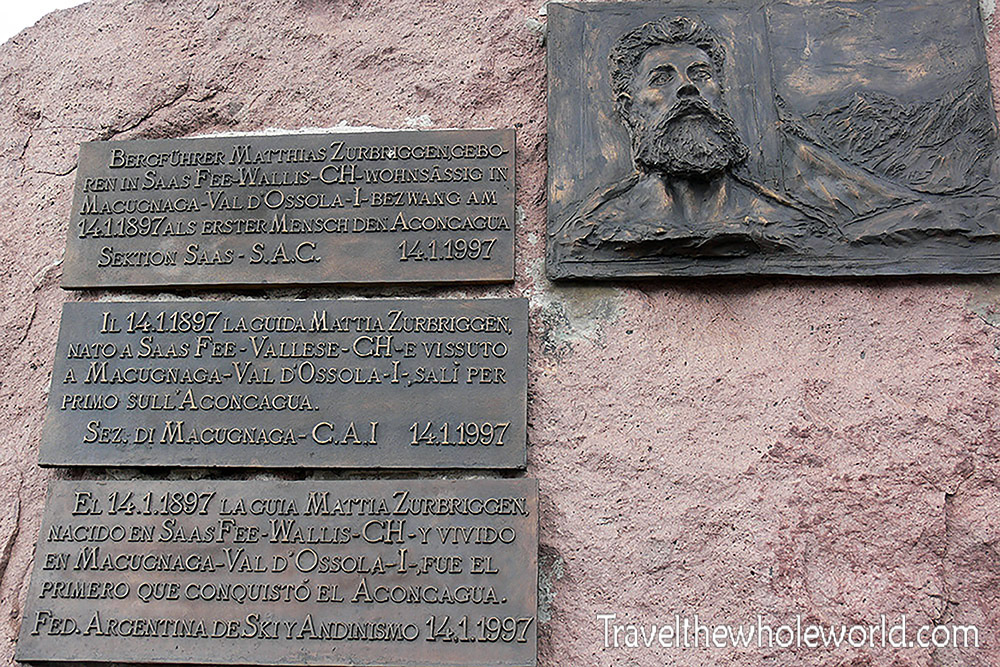 Some of our local hikes brought us to this memorial right outside of base camp. This was dedicated to Matthias Zurbriggen, who was the first known climber ever to summit Aconcagua! This was done way back in 1897, when it was even more of an achievement due to the lack of information and advanced gear. I remember once reading Mary Shelly’s Frankenstein where a character had a thought to go to South America and be the first to reach the top of the Andes. That book was written in 1818, or about 80 years prior to anyone reaching the summit. 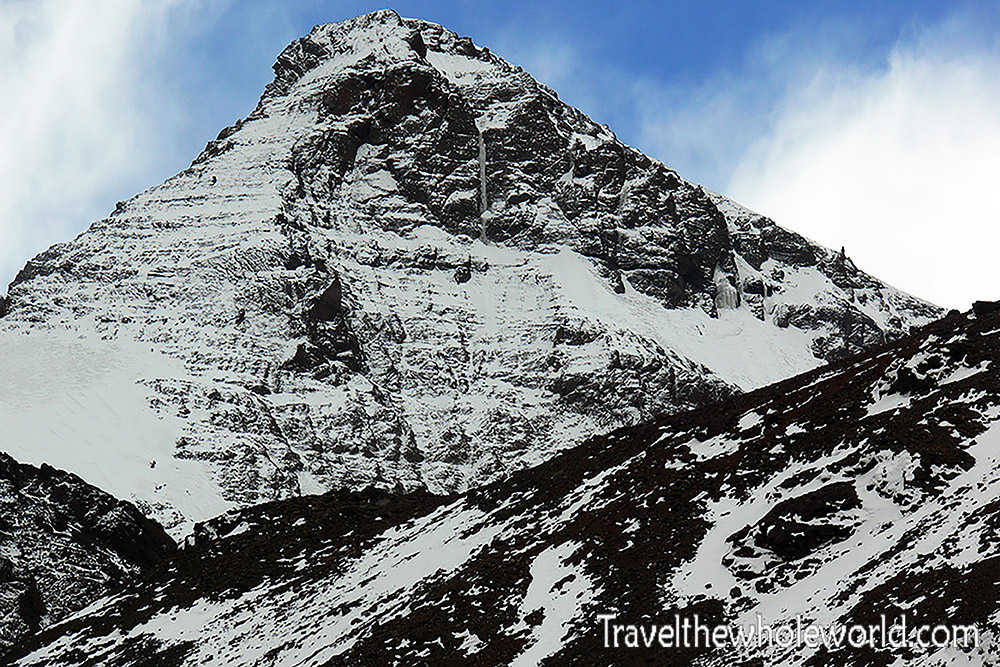 Of course Aconcagua’s summit dominates the landscape, but there are still plenty of formidable mountains in the area. Above is another large mountain surrounding base camp; this one looks like it could top 16,000 feet (5,000 meters). 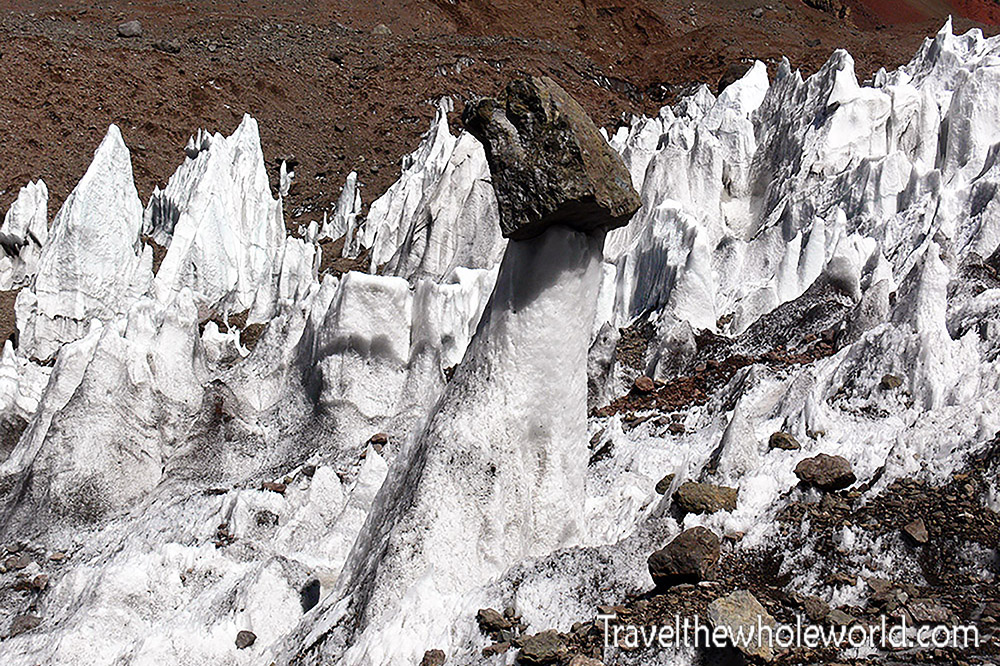 Once we arrived to base camp we began to check our oxygen levels in our blood on a daily basis. After just two in base camp, one of our fellow climber’s hadn’t acclimatized and had only 60% oxygen in his blood. His lungs had also began to fill with fluid as a result of the high altitude. Because this was life threatening, he had to be evacuated by helicopter. For the rest of us, we could only continue to acclimatize before moving on and hope the same bad luck wouldn’t happen to us. Some of the acclimatizing hikes took us to these ice formations known as Penitentes. The ski resort we went to earlier is named after this phenomenon. The tall spikes of ice on the left are about the same height as a human, and are pretty impressive. Below you can see a large area of them just outside of base camp. 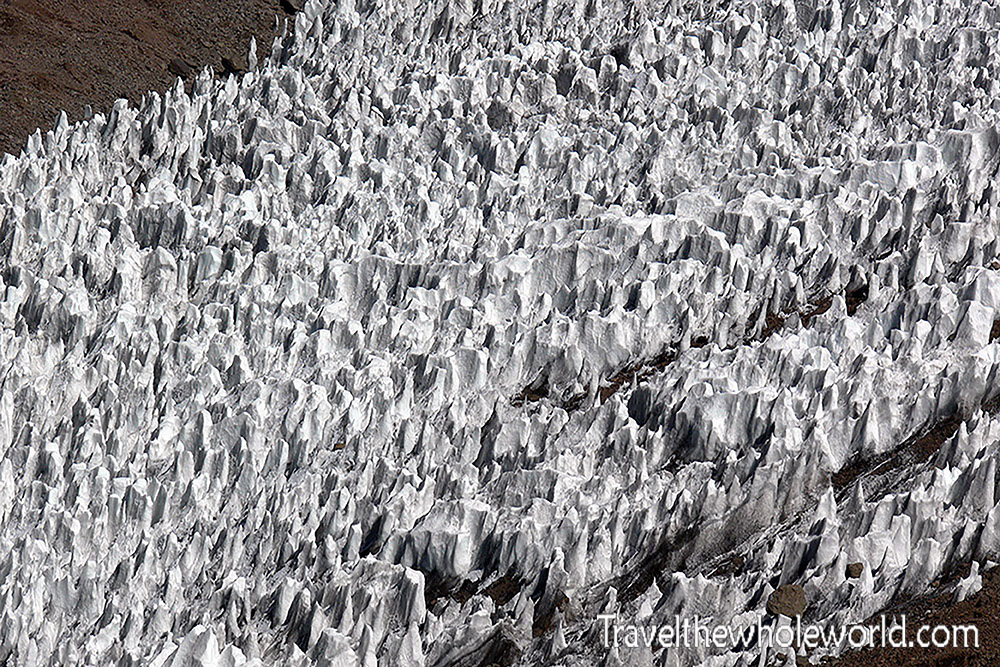 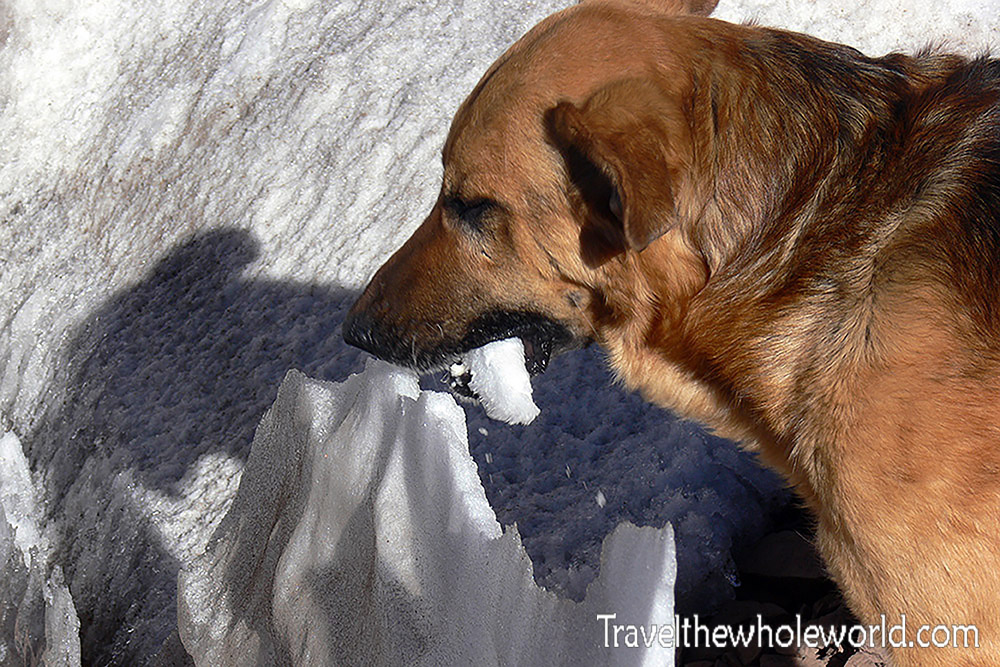 One of the times we returned to Penitentes we even had a dog join us. I didn’t photograph it, but about 20 minutes from base camp is a hotel. Of course it’s pretty primitive without running water and probably power based off a generator. It does provide a way for you to cheat though and feel like you’re no longer on an expedition! 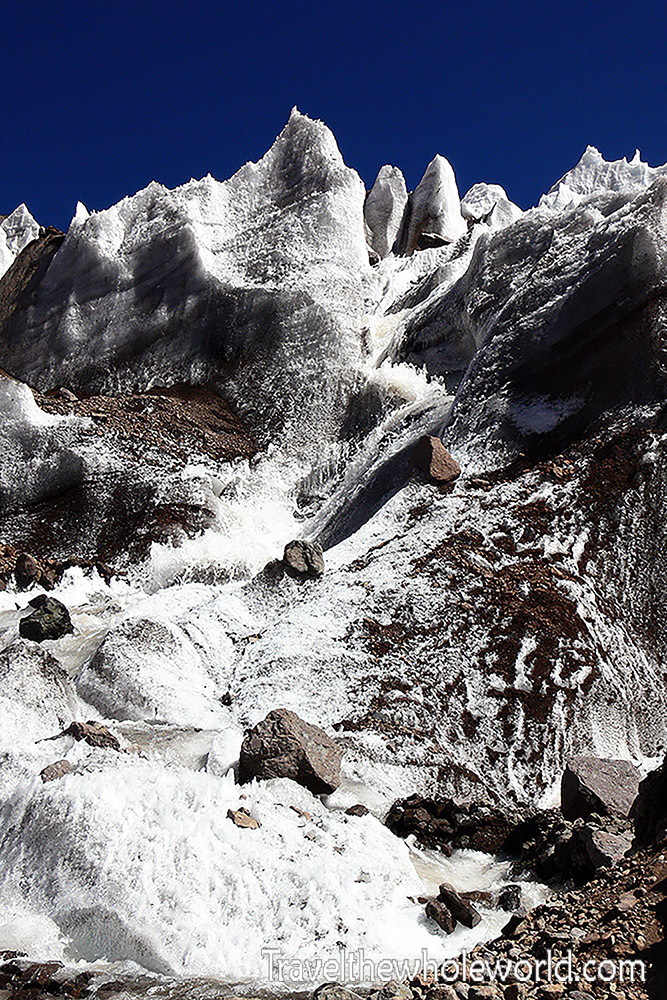 Since we were at the very end of the climbing season the hotel was scheduled to close in a few days after we got to base camp. We didn’t have much time to enjoy it, but we went as often as we could. Above is a photo of some of the scenery along the way, below is a picture of myself crossing over a small river between the hotel and base camp. 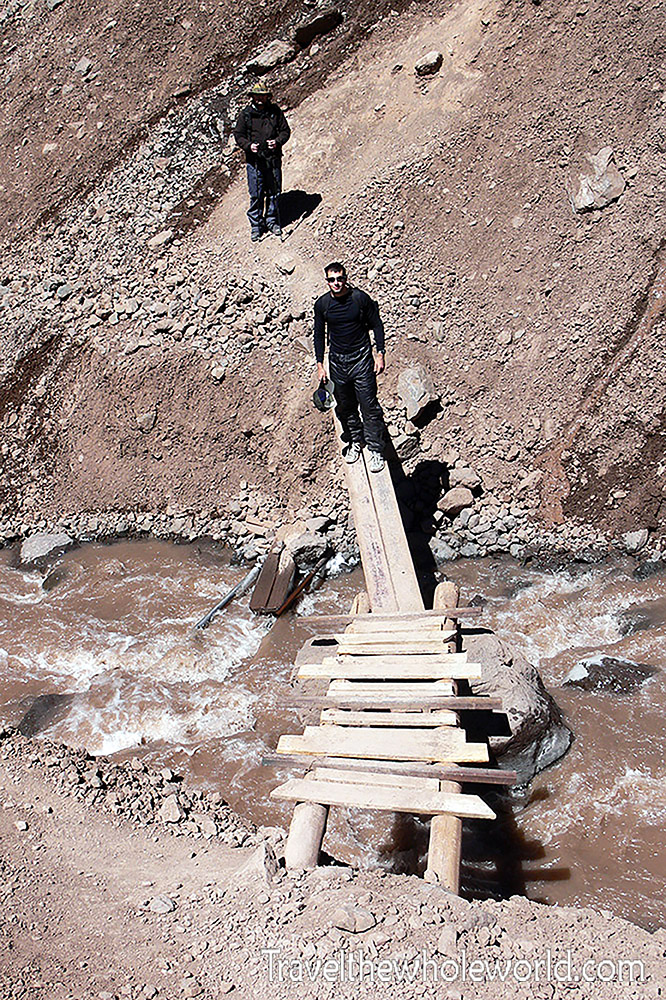 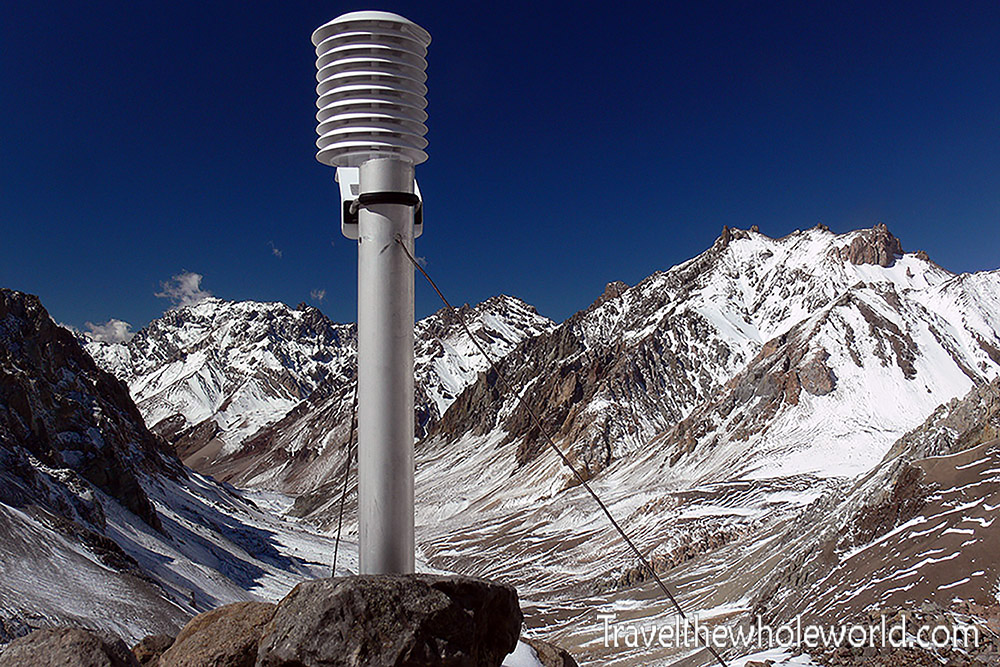 One last thing we came across on one of our hikes was this device poking out of the ground. We weren’t certain on its purpose, but myself and my climbing partner both assumed it was some type of weather device. This is important, because soon after our nice and sunny weather came to an end! 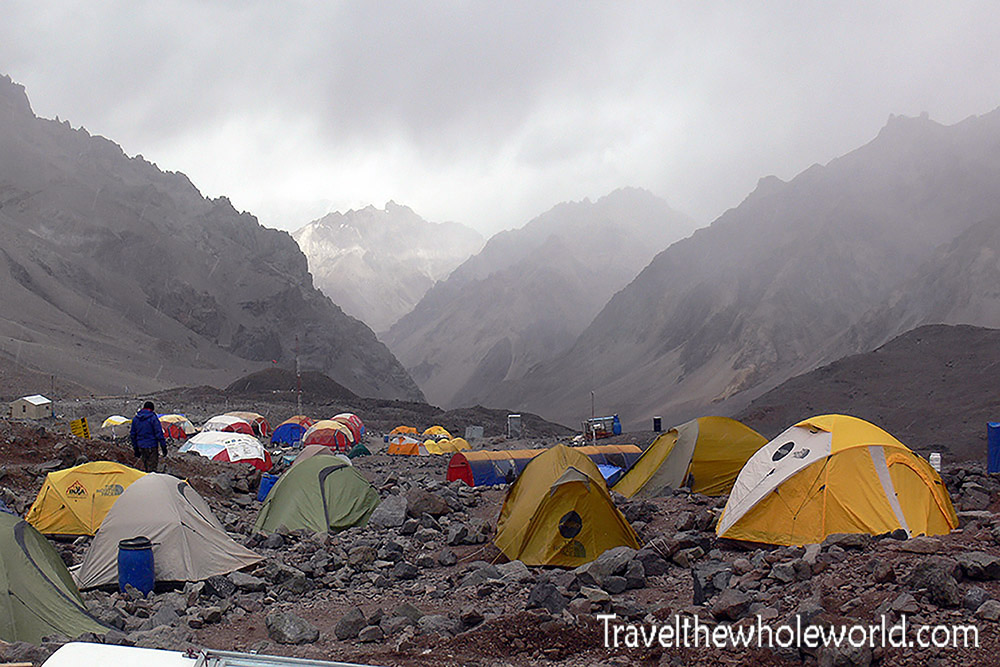 For the most part base camp hadn’t been too cold. Argentina’s hot summer temperatures can easily reach high elevations. The best times to climb Aconcagua are in December and January, so being that this was now late February we started to experience the changes of the seasons. After almost a week in base camp we had temperatures drop followed by a massive snow storm. Above you can see the weather rolling in the day before, and the photo below shows our camp towards the end of the snow storm. 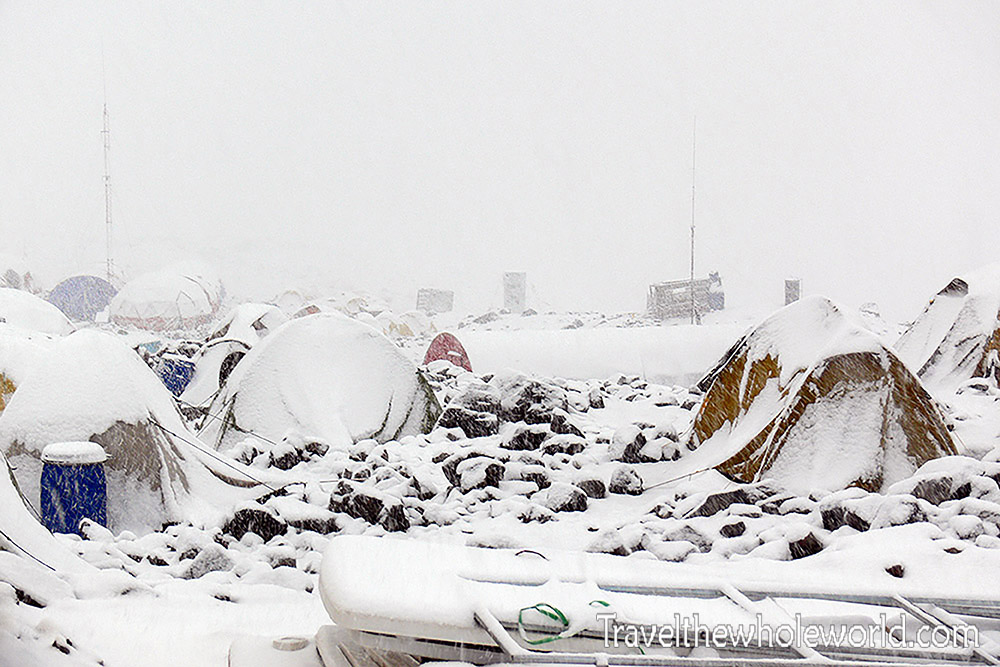 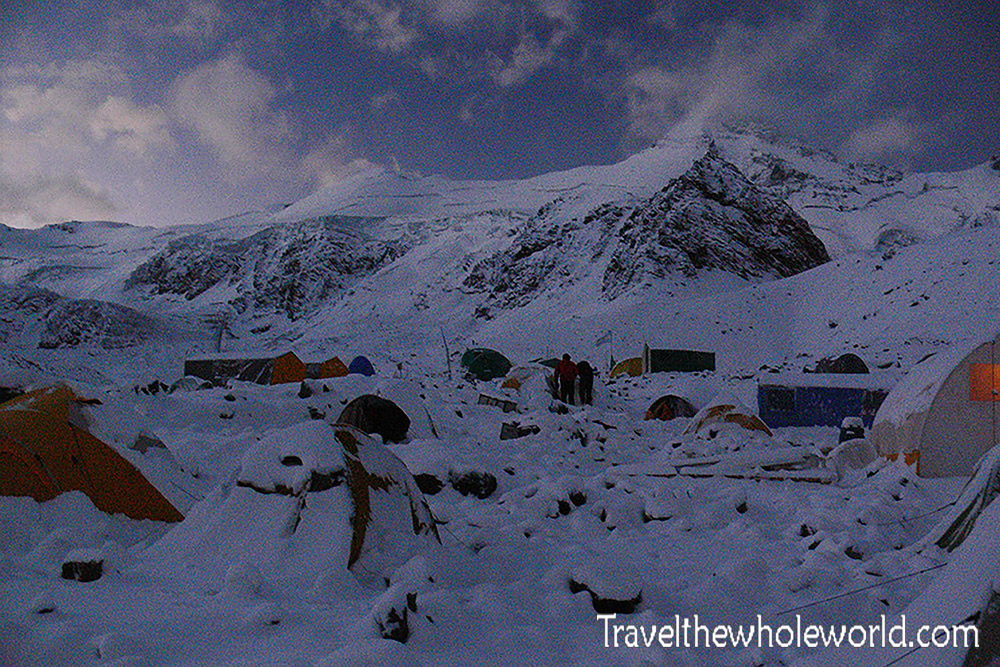 The snow storm finally ended in the evening. Despite the extra challenge of cold temperatures and everything covered in snow, it was actually pretty beautiful out. The photo above shows our camp in the evening when the sky cleared up and we could actually see again. During our last day in base camp we had one more chance to go to the hotel before they shut down. The sun did a good job melting all the snow the next day, but there had been so much of it it was still everywhere. Below is a photo of me leaving the hotel for the last time before we finally continued on the expedition from base camp and up Aconcagua! 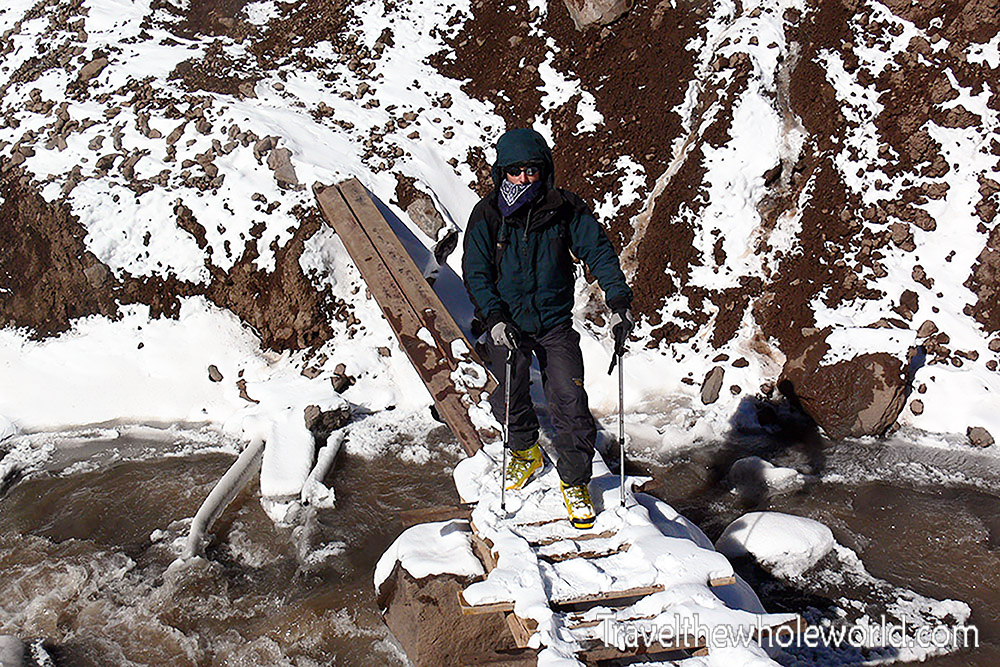 The Climb Continues! From Aconcagua Base Camp to the summit 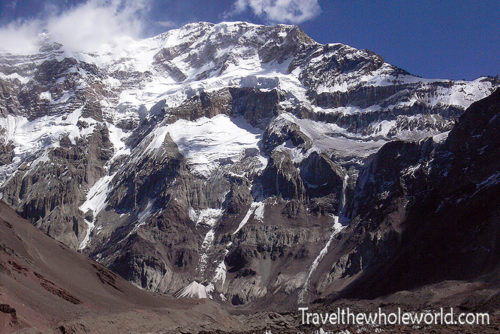