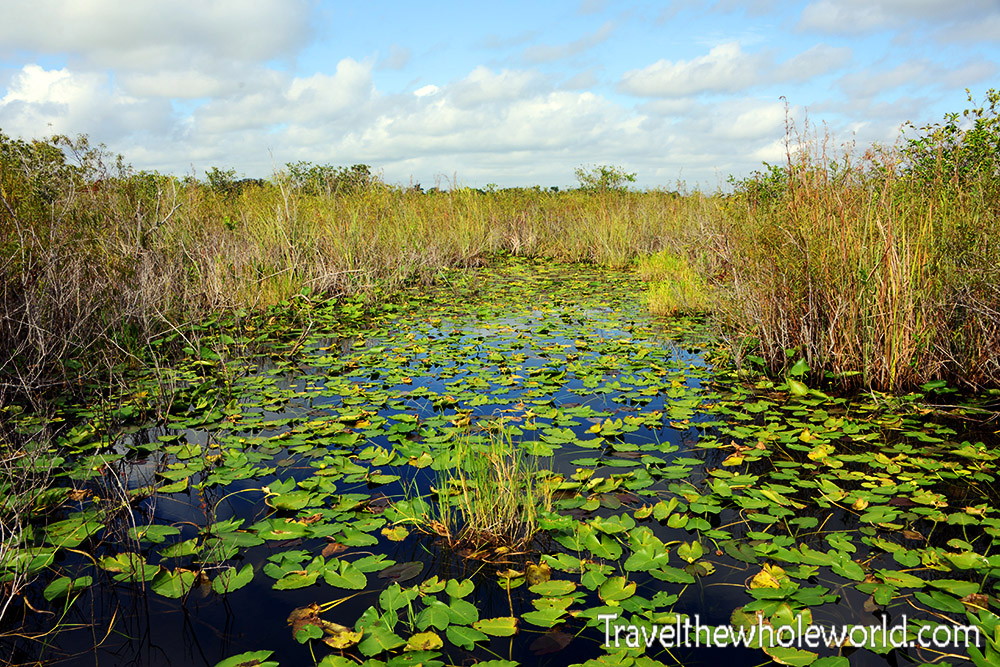 It took me a very long to finally make it to the Everglades, it was actually one of the last major national parks for me to visit. The Everglades have always intrigued me, from their unique habitat and wildlife, and of course the massive scale of nature which is so rare these days. At first glance, the Everglades look like any other swamp on the east coast. I actually have similar photos from other nearby states and they are nearly indistinguishable despite the difference between flora and fauna. 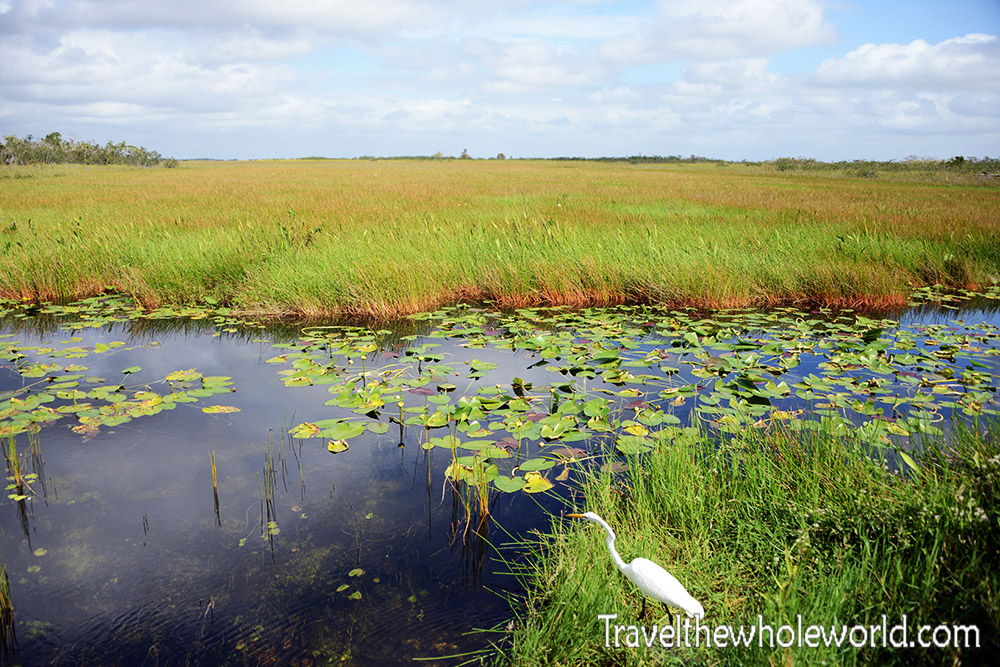 I’d say most wildlife you have to struggle to find in the Everglades. Likely people have lived in the region their entire lives and have never seen a Florida panther or bear. One animal you can’t avoid is the Great Egret. I’d estimate that while driving through the Everglades, without exaggeration I saw an Egret every few minutes. Most of them were plenty wary of my approach, but this one below had no fear! 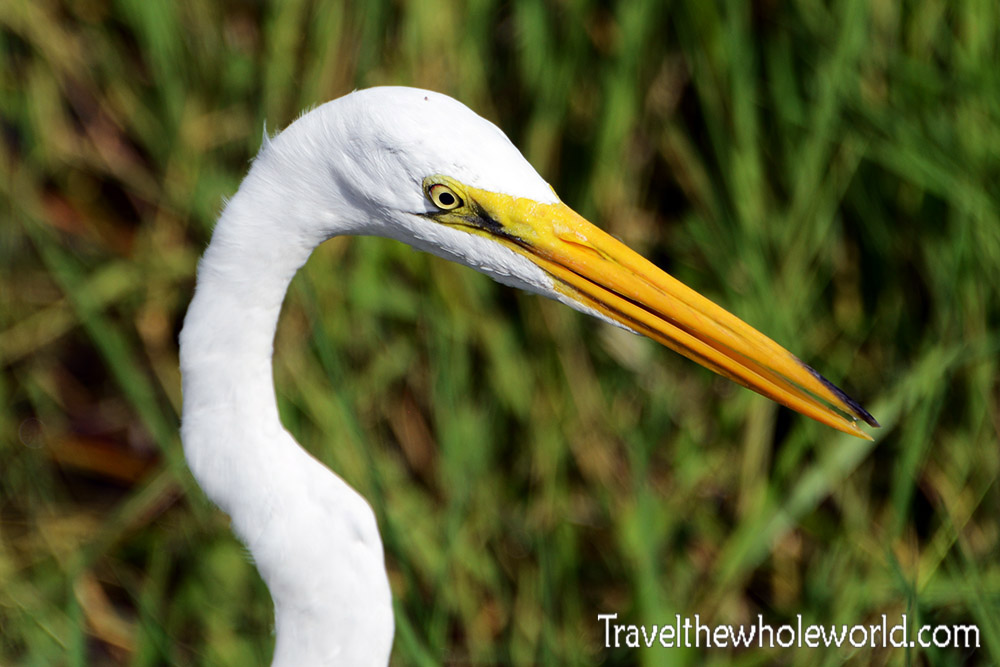 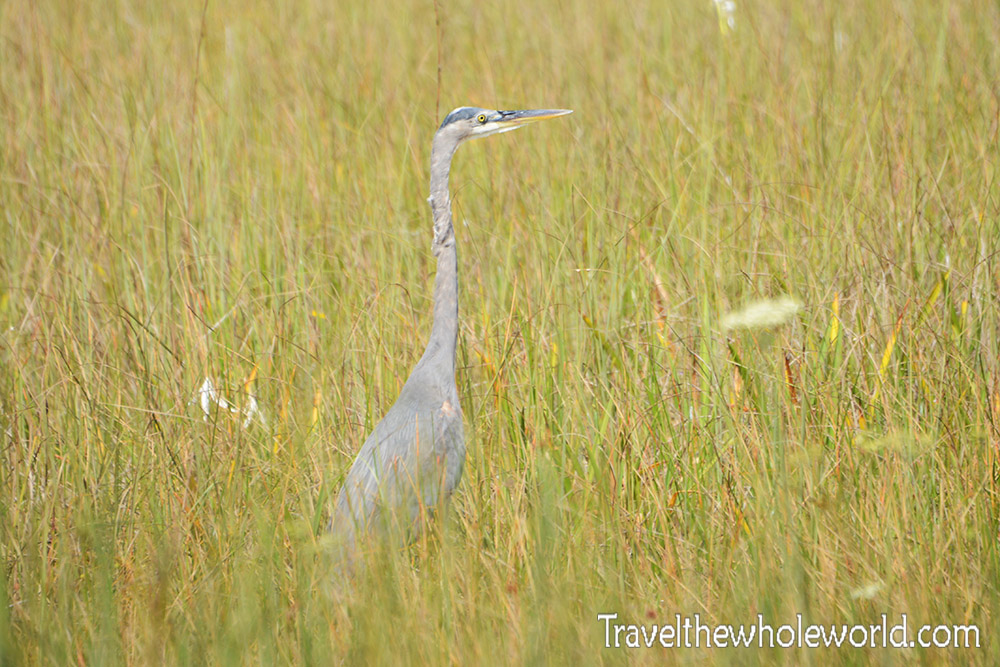 Egrets and herons are two species of birds I see all over the world. Even though I seriously most have seen a hundred egrets here, this was the only heron I came across. I’m sure there are plenty throughout the Everglades, but they are definitely not as common as the egret. I would if it could be from invasive species. Because southern Florida is neotropical, there have been a number of species that have taken over, mostly the Burmese python. Thousands now live here, and they have decimated the native population of animals such as possums, racoons, and bobcats as much as 99%! 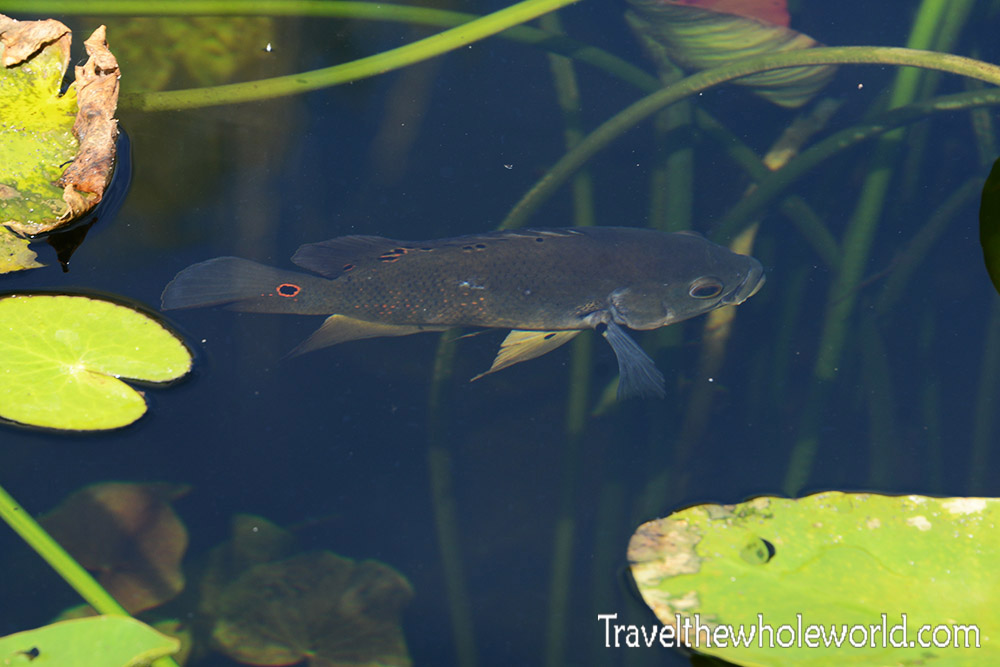 It’s not just pythons that are invasive, so are many species of fish. There are some parts of the Everglades where the water is rust colored with no visibility, and others are clear enough that you can photograph fish from above. I believe this could be a cichlid which is not native to the Everglades. I happened to take this photo as a ranger walked by and I heard him telling someone that one of the fish in view weren’t native. I was surprised he didn’t attempt dive in after it but instead he kept on walking. This wasn’t before he mentioned that this was the famous location where a giant python battled an alligator for nearly twenty four hours! 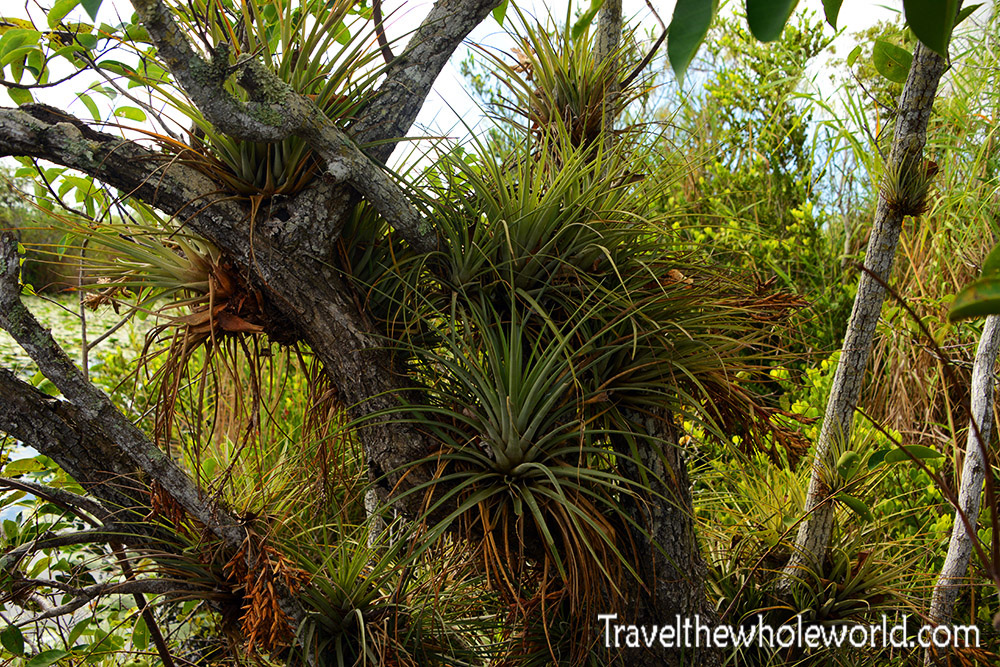 Along the boardwalk where I saw the fish and lily pads, I also saw these plants that for me looked more like those from a cloud forest than a swamp. I often see ferns and small plants growing off of trees in altitudes above 10,000 feet (3,000 meters) in central or South America, but never at sea level. Around this area I was also lucky to spot this giant grasshoper below. It was nearly the size of my phone! 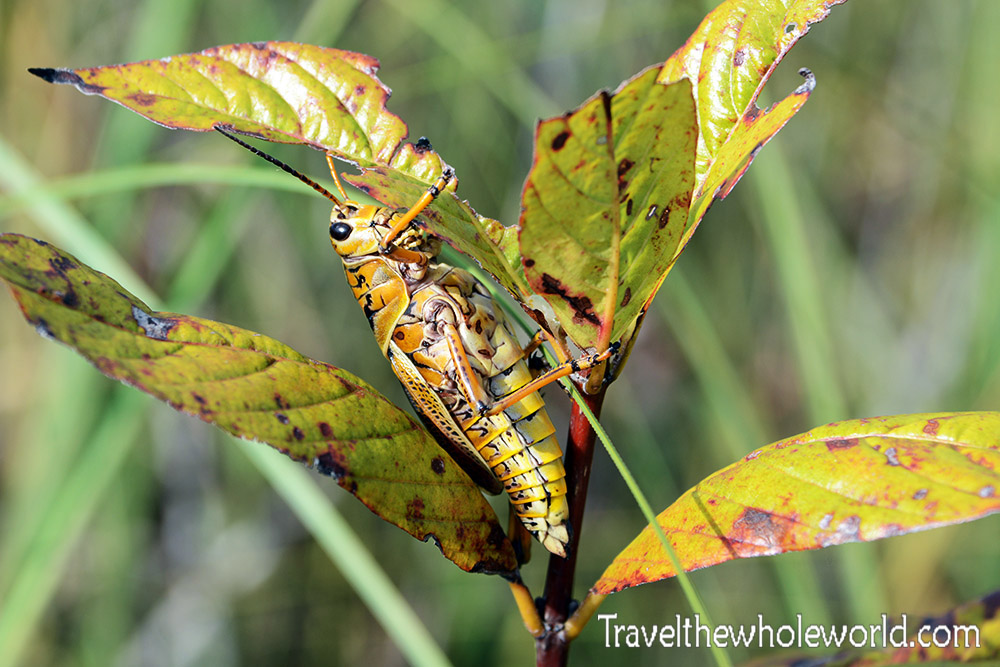 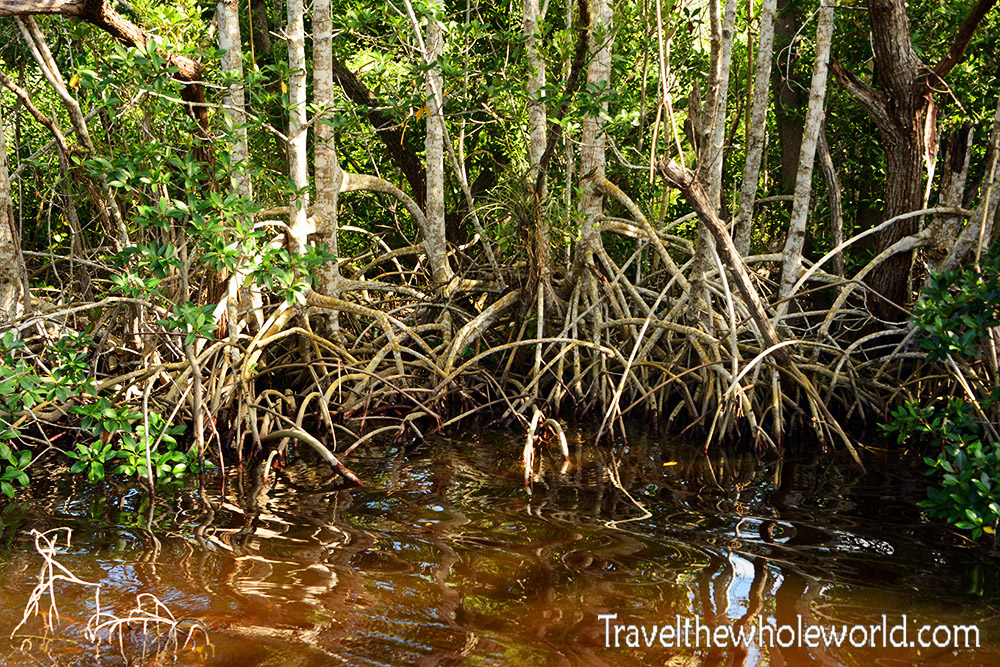 Early settlers into the area didn’t have much appreciation for the Everglades. They largely saw it as a massive swamp with no real value. The Everglades suffered greatly from a combination habitat loss and change, as new dams and canals brought in saltwater to areas that had historically been fresh. Some serious efforts to reverse this have been made, and so far progress has been promising. The photo above shows one of the mangrove swamps in brackish water. 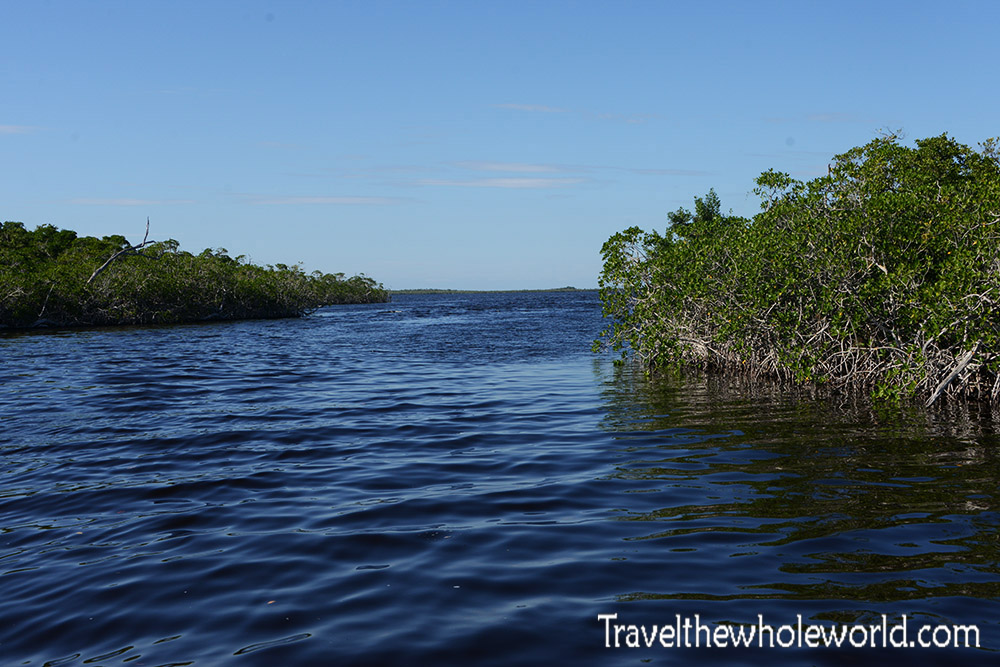 There are many canals or ‘creeks’ like this one that wind through the Everglades. This one opens up to a massive bay that is the second largest inland body of water in Florida. You may be able to make out some land in the background of the photo, but these are just islands, or keys as they are called in Florida. Despite how massive the bay is, it rarely gets more than six feet (two meters) deep. This photo below was taken along these creeks, where some elevation gain brought some relatively large trees covered in vines and thick foliage. 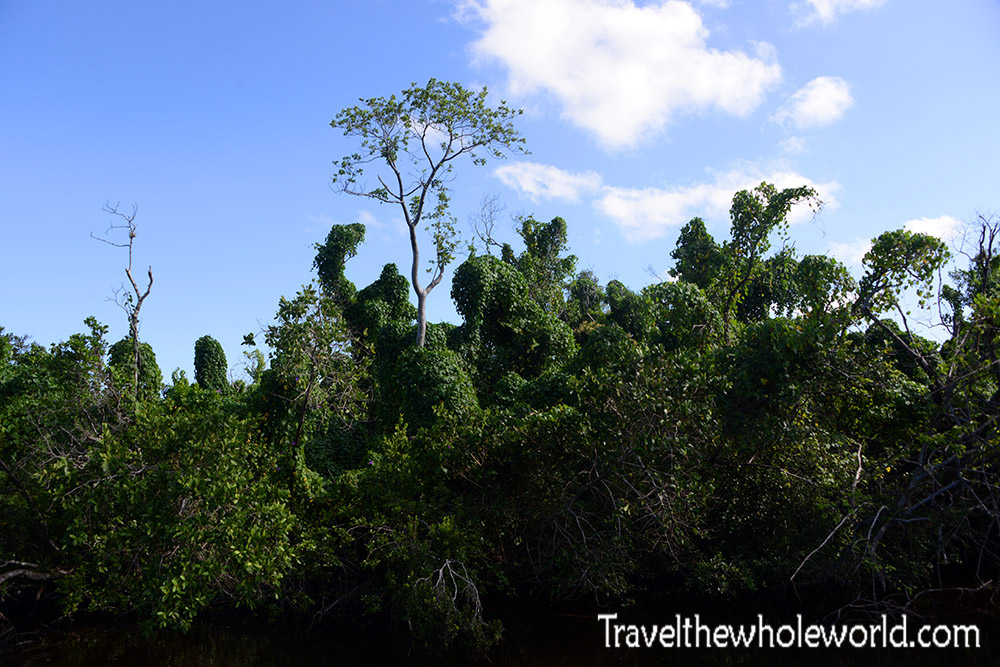 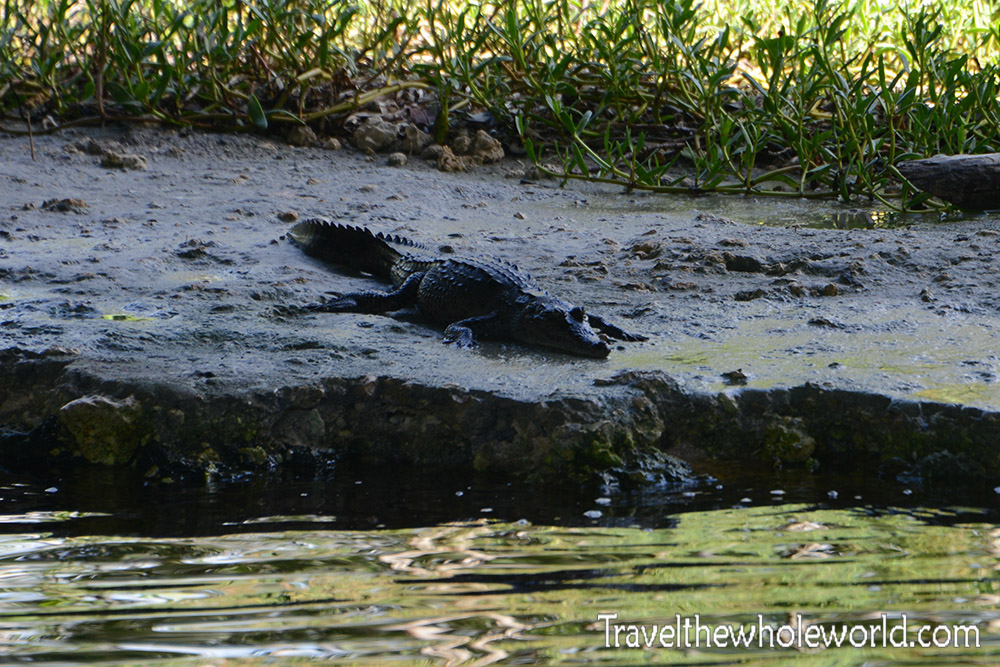 Along these mangroves, I also saw this juvenile crocodile. I saw some adult crocodiles which I posted further below on this page, but this was the first American crocodile I ever saw. It’s estimated that he just a few years old, based on his size and the fact that he is now living on his own. 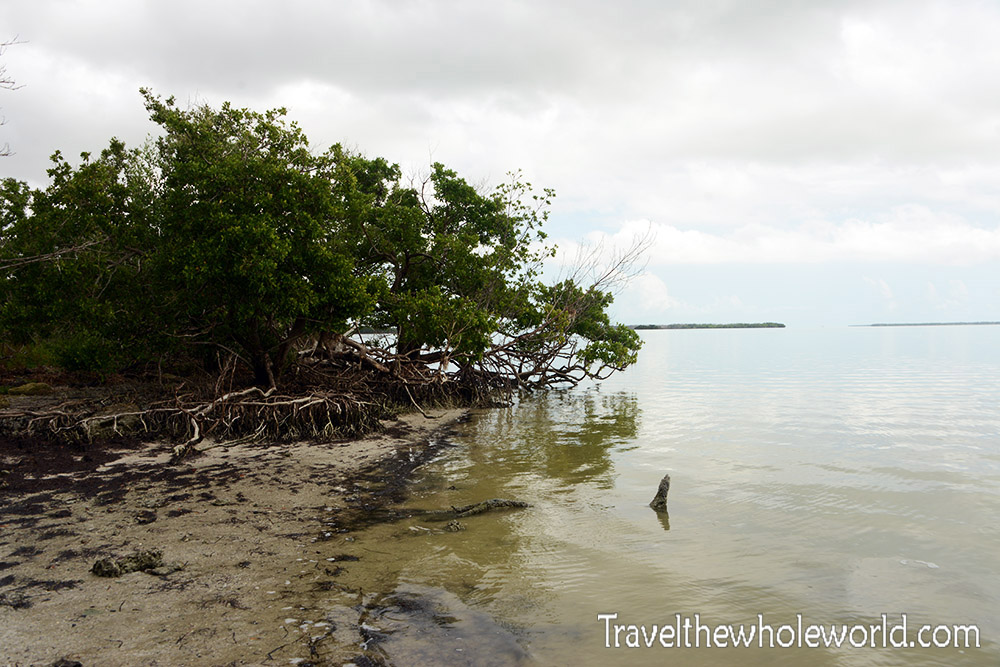 The southern most part of the Everglades is where the mainland means the ocean. To be honest, I didn’t think the scenery here was too impressive! I never thought to bring any bug spray to the Everglades, and this actually wasn’t a problem until I got to this region. I was swarmed with mosquitoes, and am not joking when I say that I am taking breaks from writing this up to scratch away. 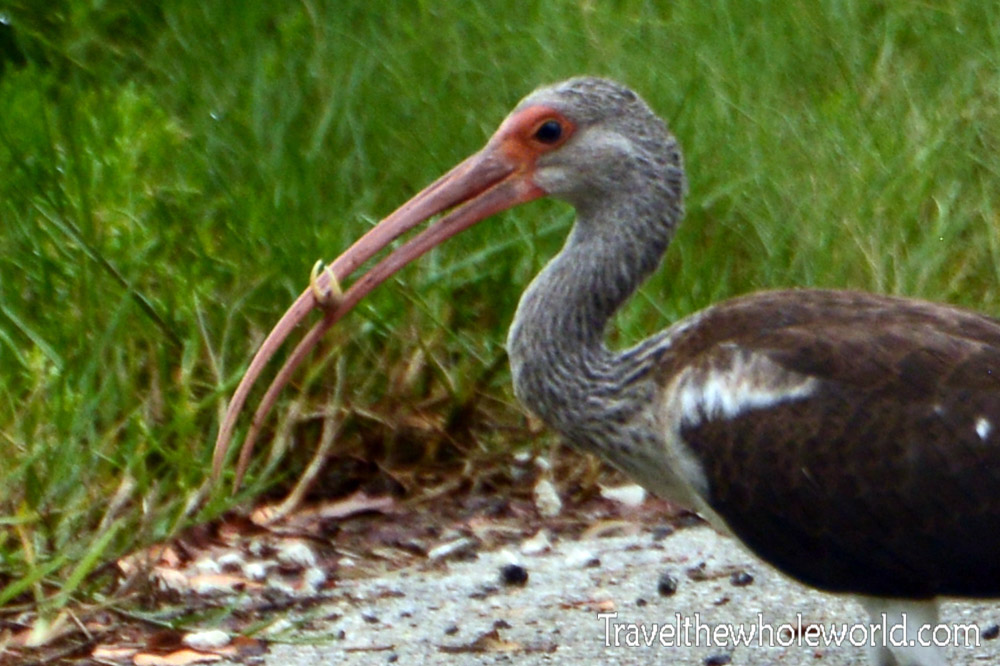 The saving grace of visiting the southern coast was all the ibis birds I came across. I don’t know if these things eat non stop, but these are two different birds and both of them were in the middle of eating crabs. 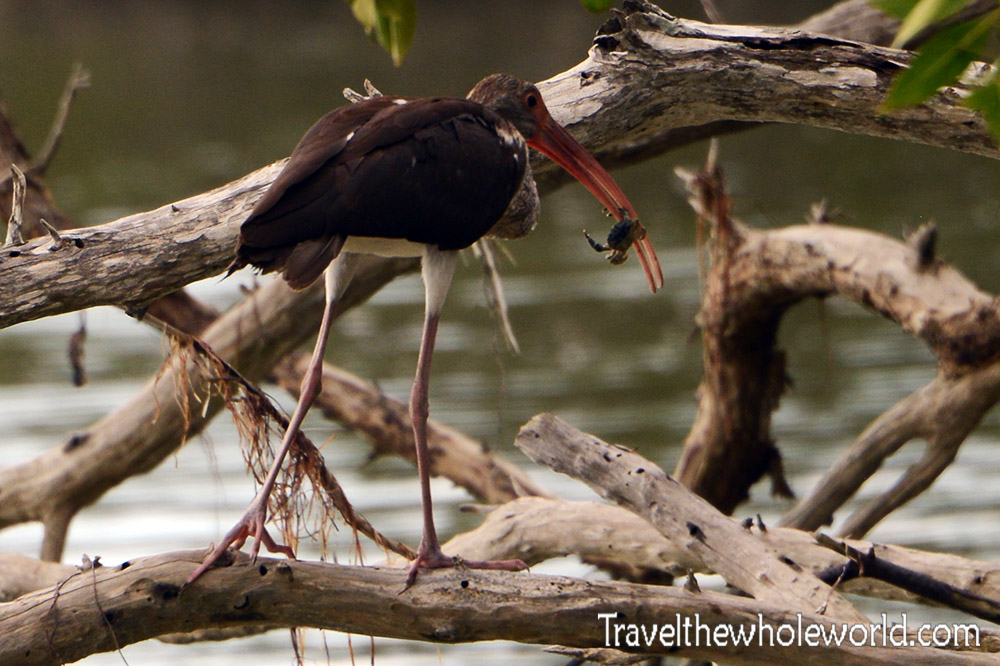 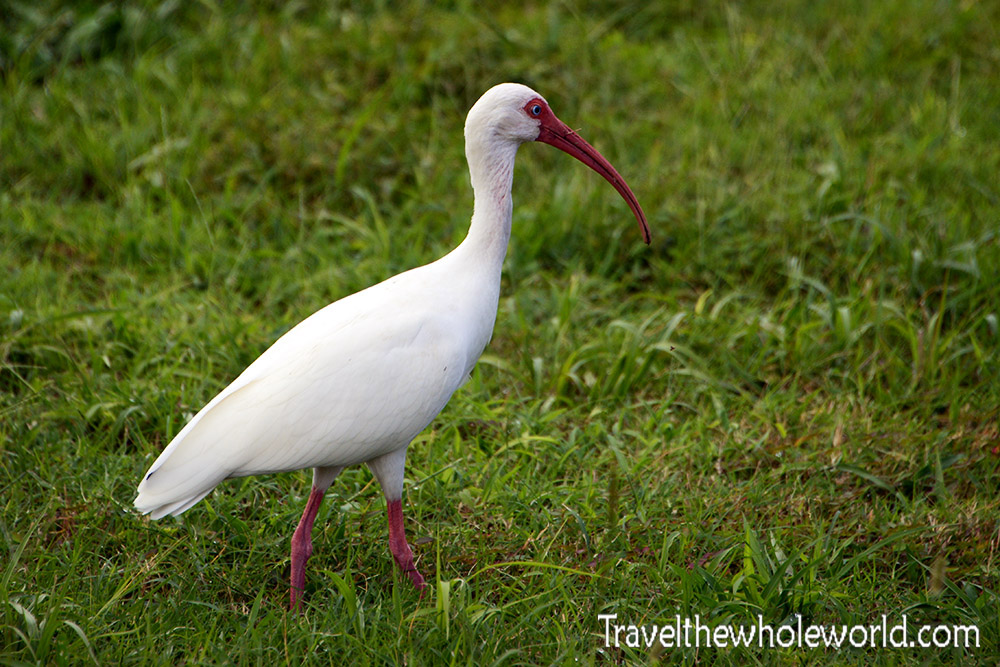 I believe the first two ibises to be the giant ibis based on their size and color. This one is a bit easier to identify, and should be the American white ibis found just walking distance from the same shore. 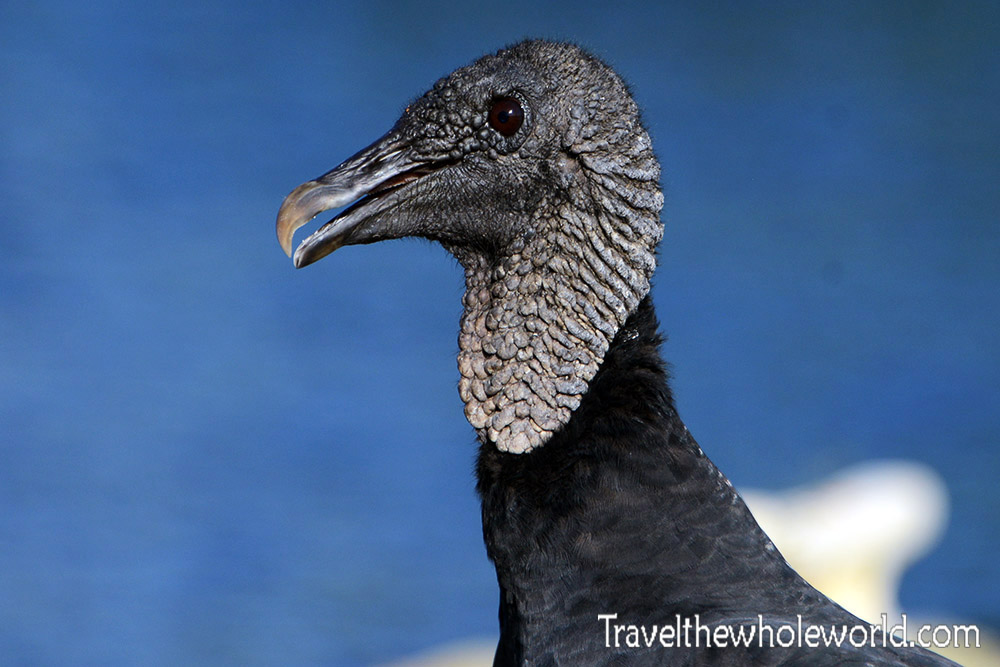 The ibis seemed to densely populate the shorelines, and the egrets populated the marshes. These vultures can be found everywhere though. I don’t ever recall seeing a vulture when I was growing up, but a few years ago there was the same species as this black vulture eating a dead squirrel on my street. They don’t seem to be that scared of people! 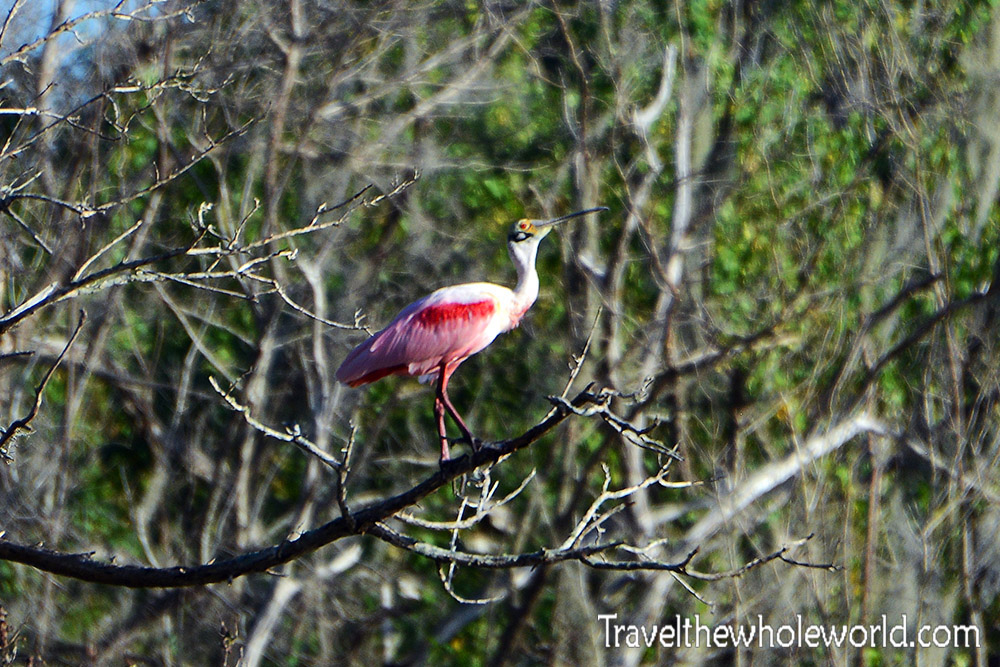 A more attractive bird than the vulture is this roseate spoonbill. I saw these in an area of the Everglades known as flamingo. With their pink wings and large bodies I assumed they were flamingos at first. I even remember thinking they have strange beaks for flamingos, but as it turns out they are a totally different species. They do maintain their pink color from their diet like the flamingo, but otherwise they are more related to the ibis birds. These birds were almost outside the range of my camera, and taken with max zoom in the Everglades’ eco pond to the south. 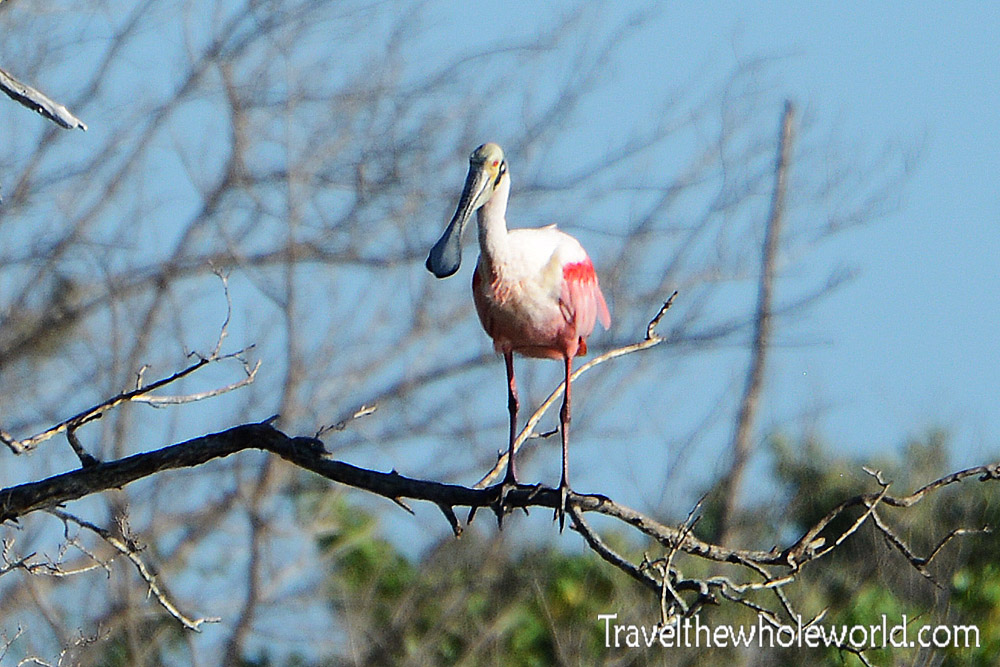 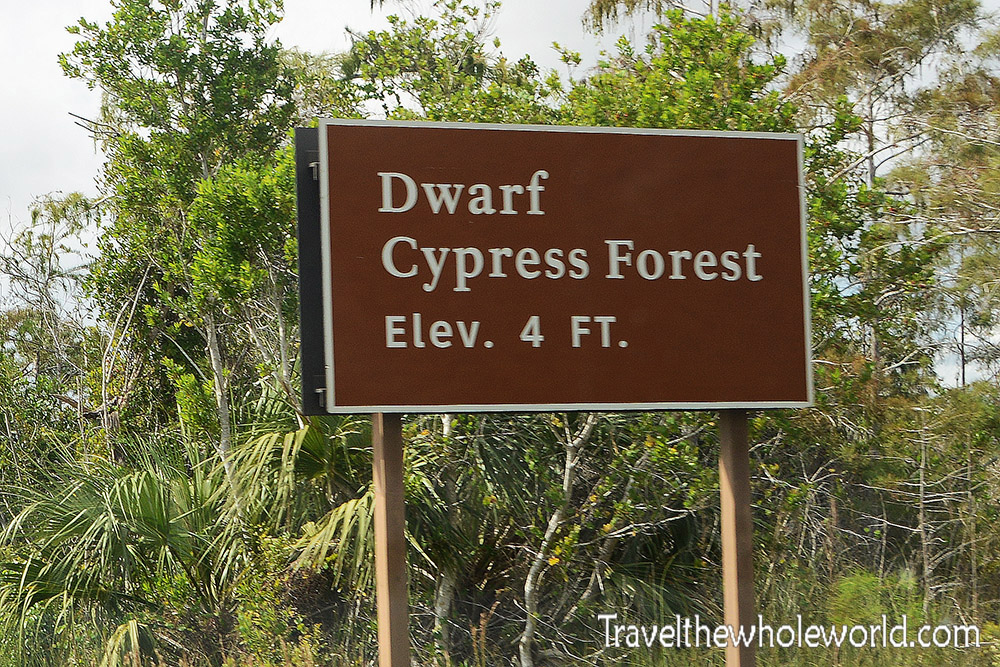 What’s also unique about the Everglades is its diverse habitat. Many people mistakenly believe its nothing but swamp from end to end, but while this is largely true, there are many interesting ecosystems here as well. In the Everglades, inches above sea level can bring about a completely different habitat. For example, this sign shows that at just four feet (1.3 meters), is enough to sustain a Cypress forest. Otherwise just inches less might bring about marshland, and below that mangrove forests. 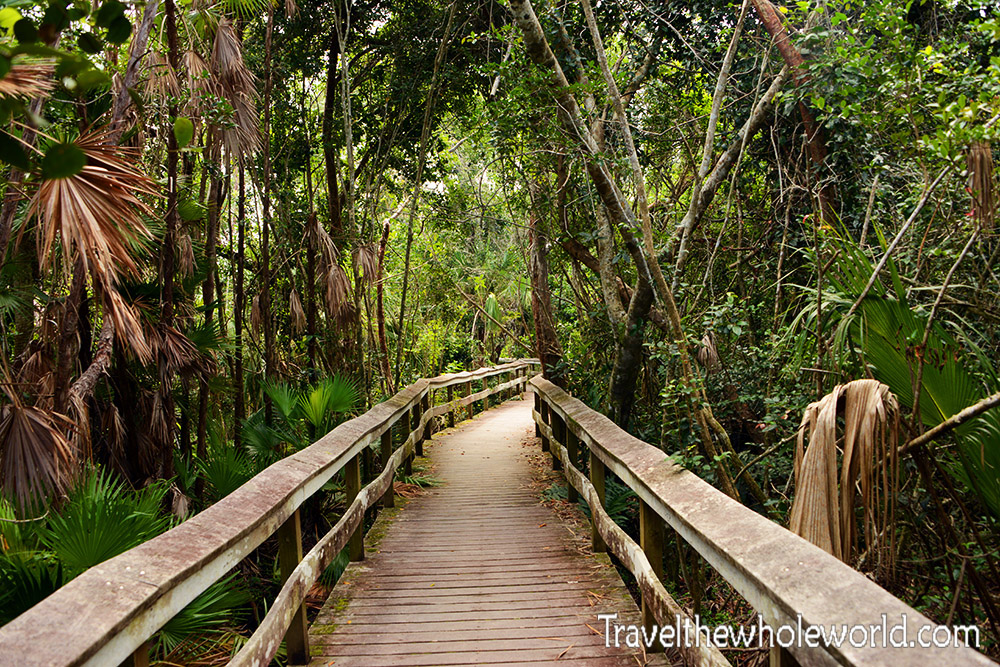 I didn’t hike through the dwarf cypress forest, but I did visit a small area known as the mahogany hemlock. This is an elevated patch of ground that is covered with thick trees, including of course mahoganies. The photo above shows the boardwalk that circles through the forest, with one of a massive mahogany tree below. I had never seen one of these before, but these tropical trees are highly prized for their quality wood. 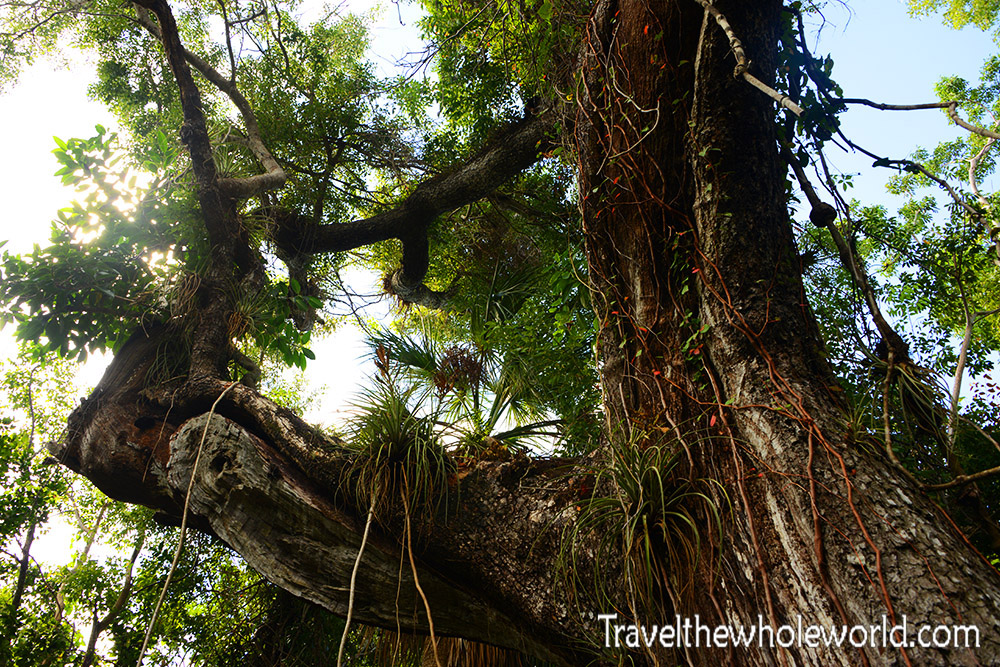 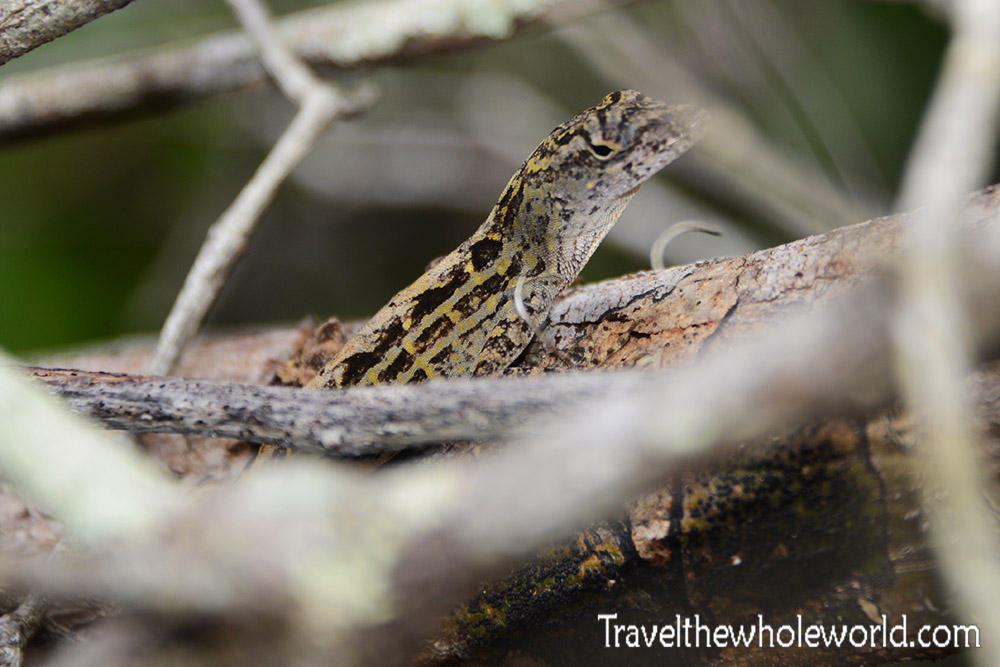 While I hiked in the mahogany hemlock, I had dozens of birds flying around me. They also say this is a popular place to spot owls. The trees were so thick that it was almost impossible to see any of them clearly much less photograph them. That goes for birds, I didn’t see any owls myself. I did see tons of lizards. These guys were also hiking in the thick vegetation, but I was at least able to get a picture of this lizard above and this anole below that thought it was camouflaged. 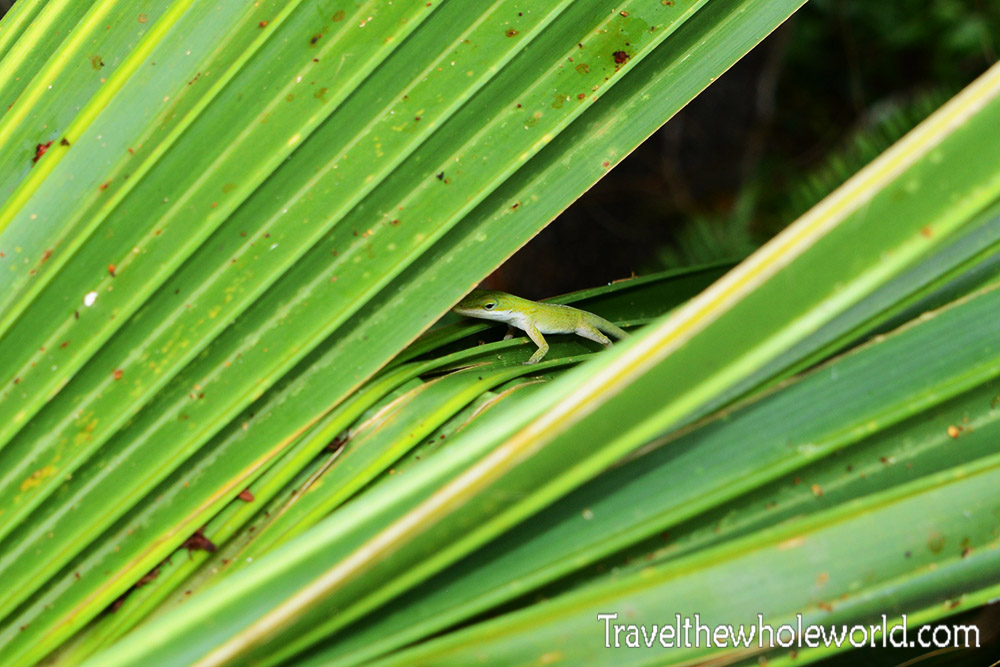 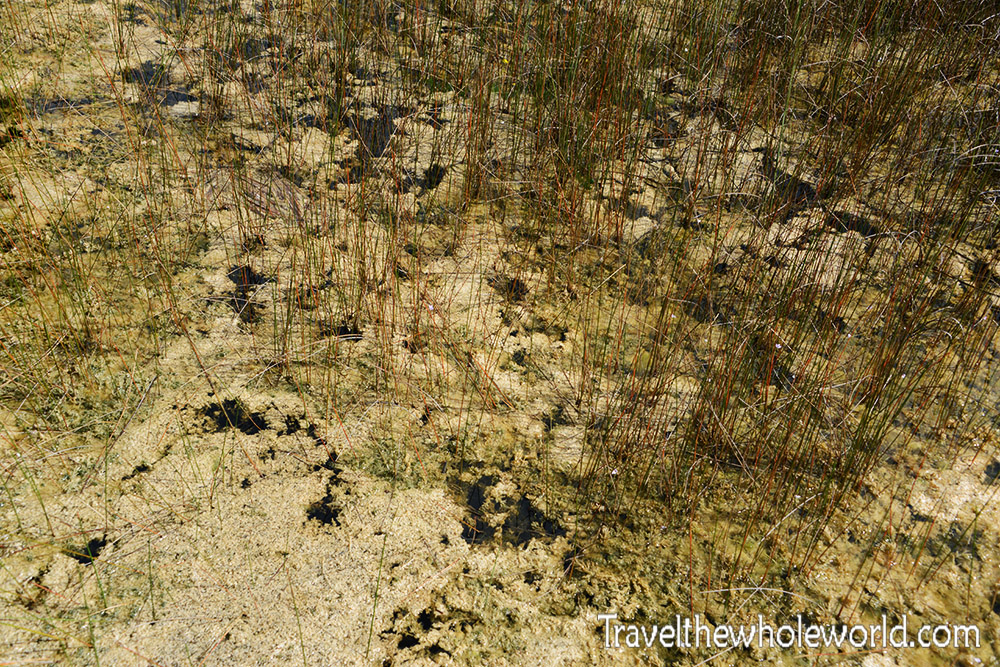 Not all of the swampy areas are the Everglades are the same. Some are covered in grass, others packed with lily pads, or parts like this one outside of the mahogany hemlock that have thick algae mats. As gross as these things look, they are actually essential to lots of wildlife here. When it gets too cold in the winter time, some invertebrates such as snails will embed themselves into the algae. 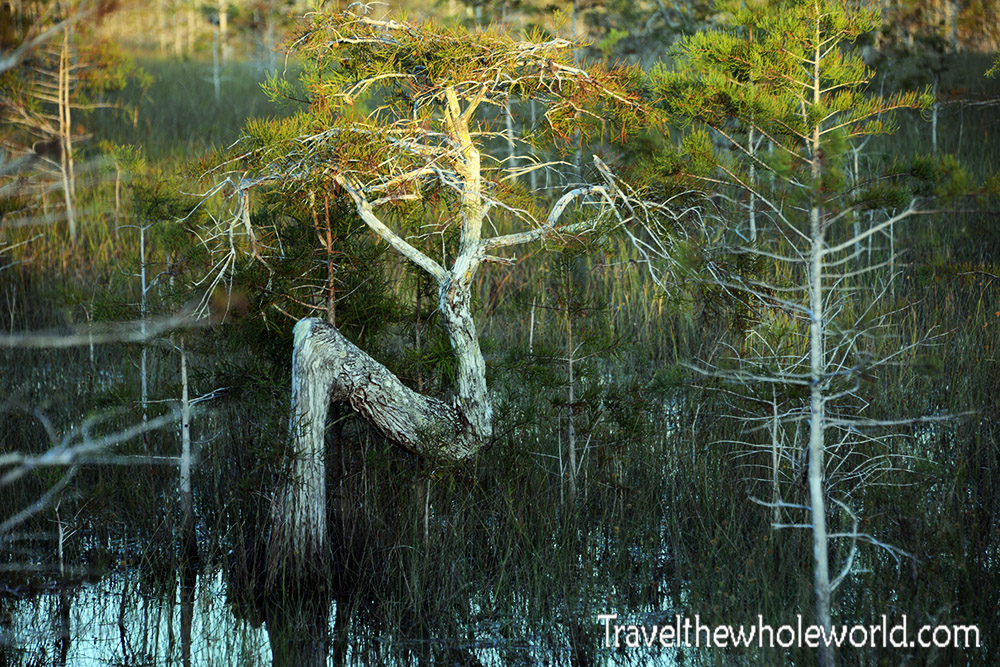 Elsewhere in the Everglades is the some of the more grassy areas of swamp, that is also home to the most famous tree in Florida. For whatever reason this is called the Z tree, although it looks much more like an N to me, but I guess that doesn’t sound as cool. It takes some determination to find, since there are no signs or markers. The terrain is so similar that if you’re off by 20 feet you’ll never find it. I met a friend while in the Everglades and as I was driving out I saw his car parked by the tree, which was the only reason I came across it myself! I couldn’t find the GPS coordinates of the Z tree online, so here they are: (25.4017094, -80.7913958). This is from where I parked my car, which is about five to ten feet in front of the tree, but it’s on the right side of the road if you were exiting the Everglades and you can’t miss it, hopefully! 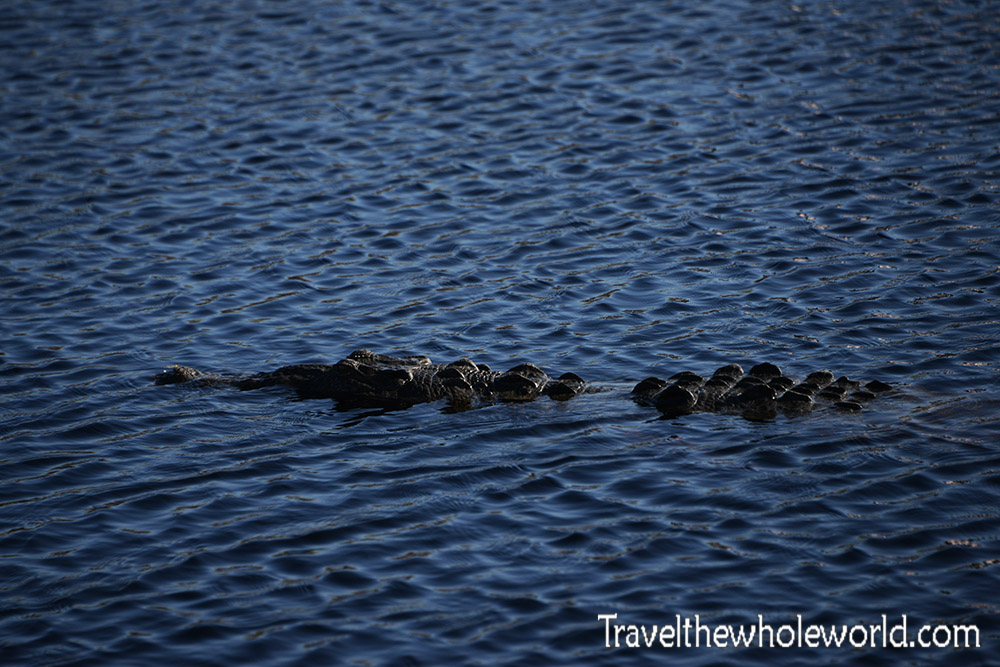 And finally, some photos of adult crocodiles. I never really understood the bumpy backs of these massive reptiles until I saw that this one was perfectly camouflaged with the ripples in the water! This guys never fully showed their bodies, so I’m not sure how massive they might have been. At first I questioned if maybe they were alligators, but I got a photo of one that proves its a crocodile. The easiest way for me to tell, is by the teeth. Alligators upper teeth can be seen, but not their under bite. In the photo below, you can clearly see the crocs lower teeth, which removes any doubt. 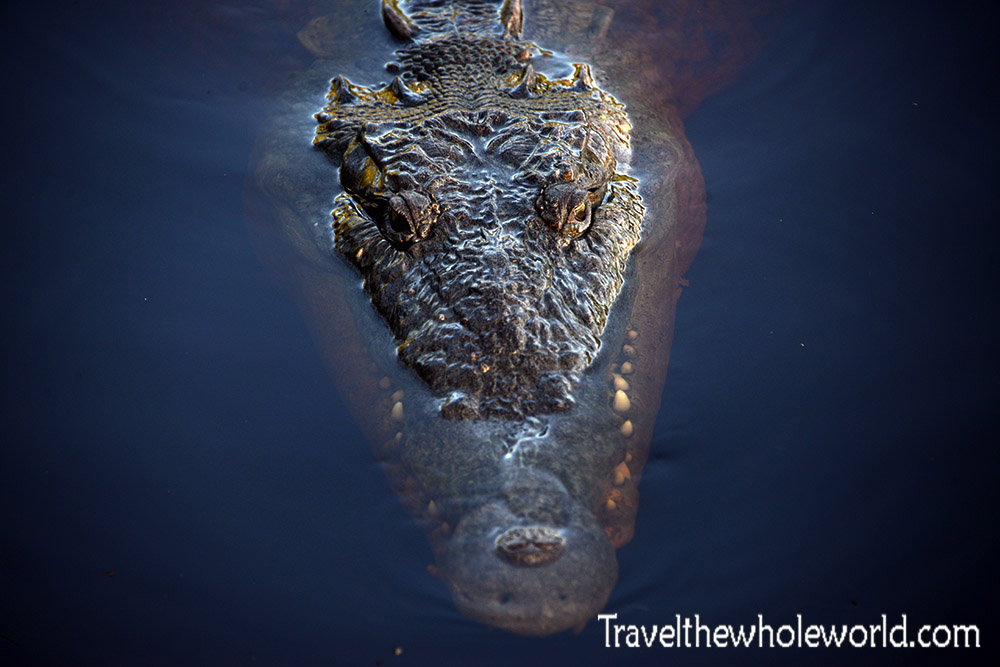 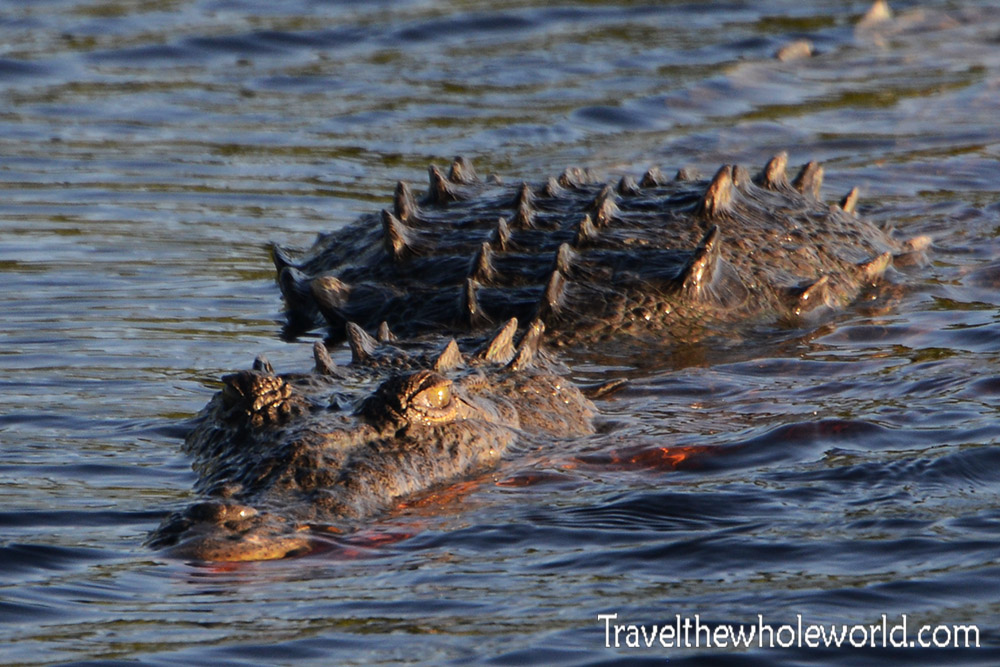 I didn’t see any alligators while I was in the Everglades, but since I had always come across them in other states I was much more interested in the crocodiles. These guys are without question much more massive than any gators I’ve ever seen. Despite their massive size, they actually aren’t much smaller than African Nile or Australian salt water crocodiles, these guys are relatively nice. They usually prey on small animals and rarely attack anything large low deer or humans, although of course there are always exceptions. Australian saltwater crocodiles are the largest reptiles on earth, followed by the African Nile crocs. This puts these guys as the world’s third largest reptiles, living fossils of the dinosaur age. 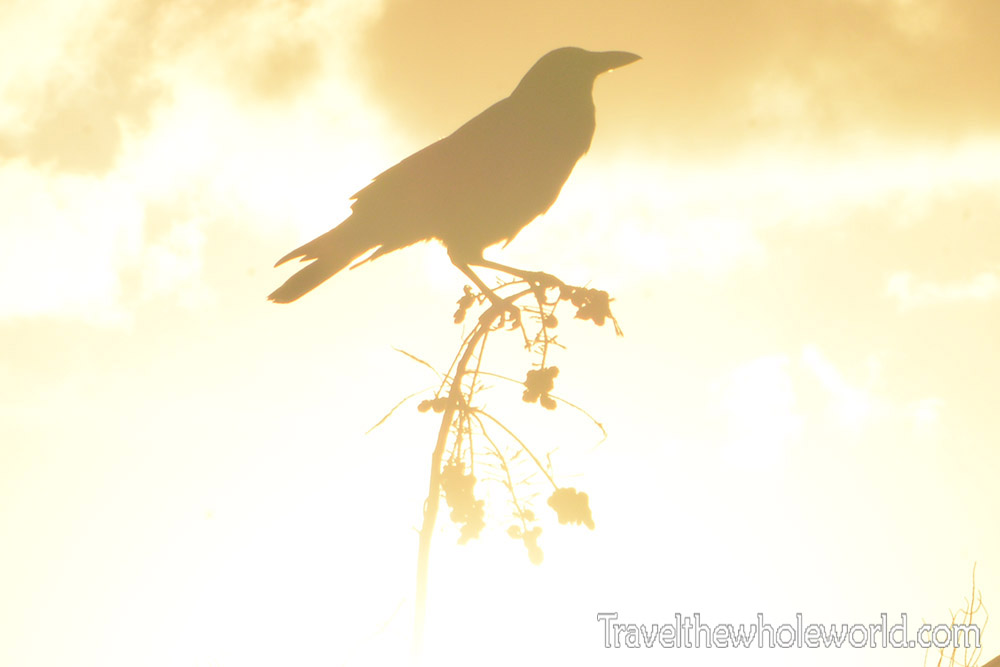 As I drove out of the Everglades, this was the very last photo I took. The sun was setting and I saw a bird out of the corner of my eye land on a branch directly in the sun. I raised my camera to take a photo, but hesitated and thought, “it’s just a crow”. Even though everyone would prefer seeing a bald eagle or a colorful tropical bird over a crow, they’re still an important part of nature. Crows are also one of the most intelligent species of birds, and I even hung out with a pair while I had lunch in the Everglades.