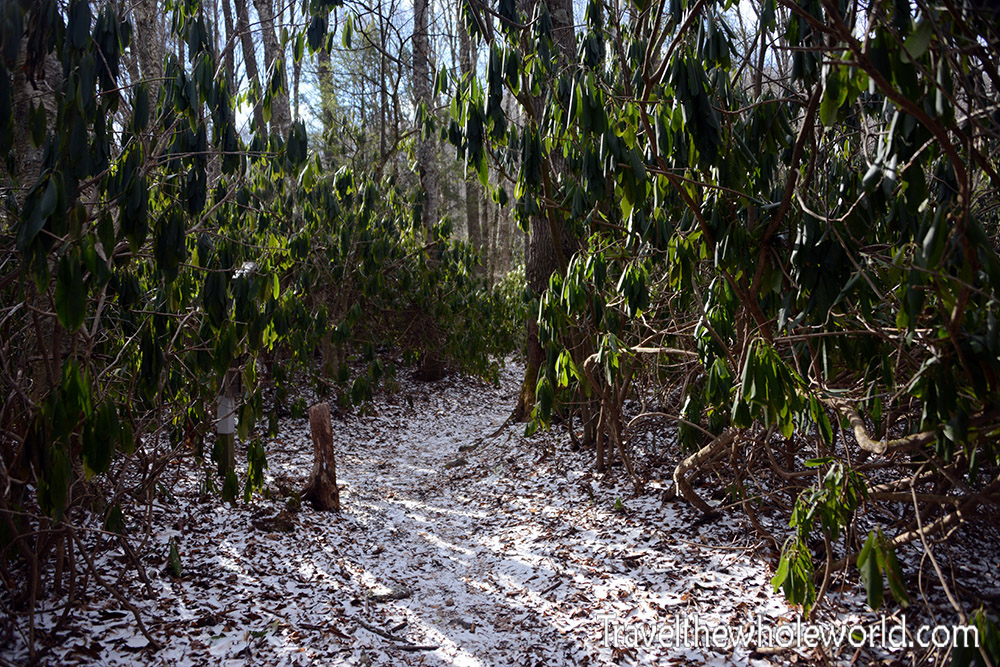 My hike up Virginia’s highest mountain began one morning late in January. Typically Mt. Rogers gets covered with snow from late December and remains under a white blanket until March. The week before my hike it had seriously been 70 degrees in other parts of Virginia. Instead of winter conditions Mt. Rogers was seeing rain storms. My friend and I weren’t confident we’d see any snow, but were happy with this dusting at the very beginning of our hike. The photo above shows some of the rhododendrons along our starting point on the Appalachian Trail. 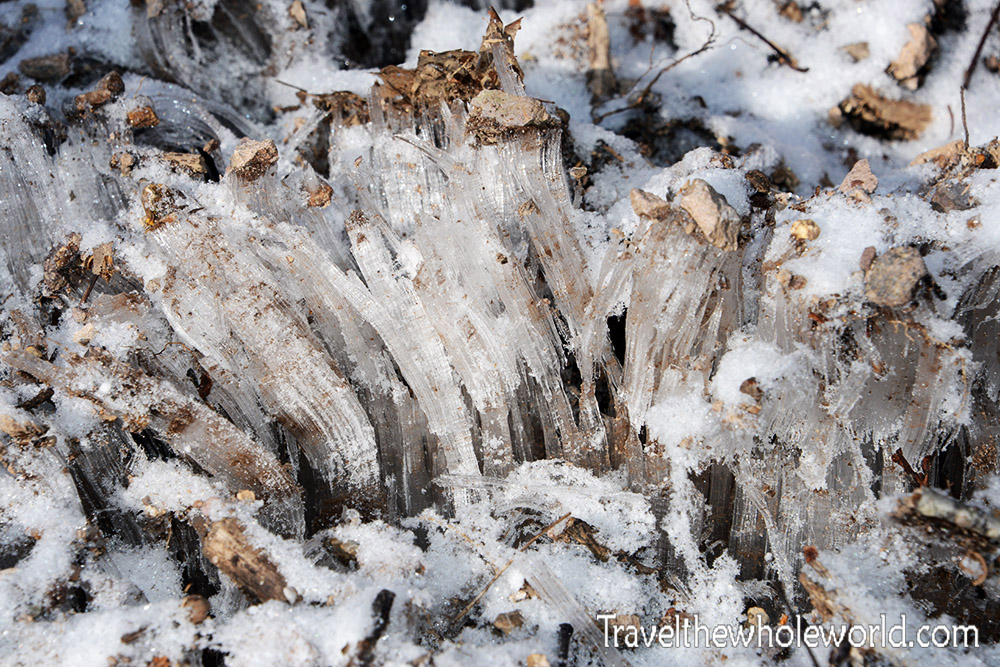 Most of the trail that we hiked up had just a dusting of snow on it while the trees remained uncovered. There were some patches on the ground that had these strange ice crystals. I’d love to know how they form. Some of these made hair like strands of ice that seemed to have grown up from the ground. These were only a few inches in height. If you noticed some of them seem to somehow have carried rocks up off the ground. When I climbed Cerro Aconcagua there were similar ice formations as these. Instead of inches in height, many of these were taller than me! Some of them also had rocks on the top of them as well. These were called penitentes, but as it turned out they were a different phenomenon. These ice formations I saw in Virginia are called ice needles. They are a result of the ground being relatively warm while the air is frozen. As water rises up through pores in the ground it freezes. More water will travel up the needles and also freeze causing them to grow. Sometimes they can be super fine, and are then called hair ice. 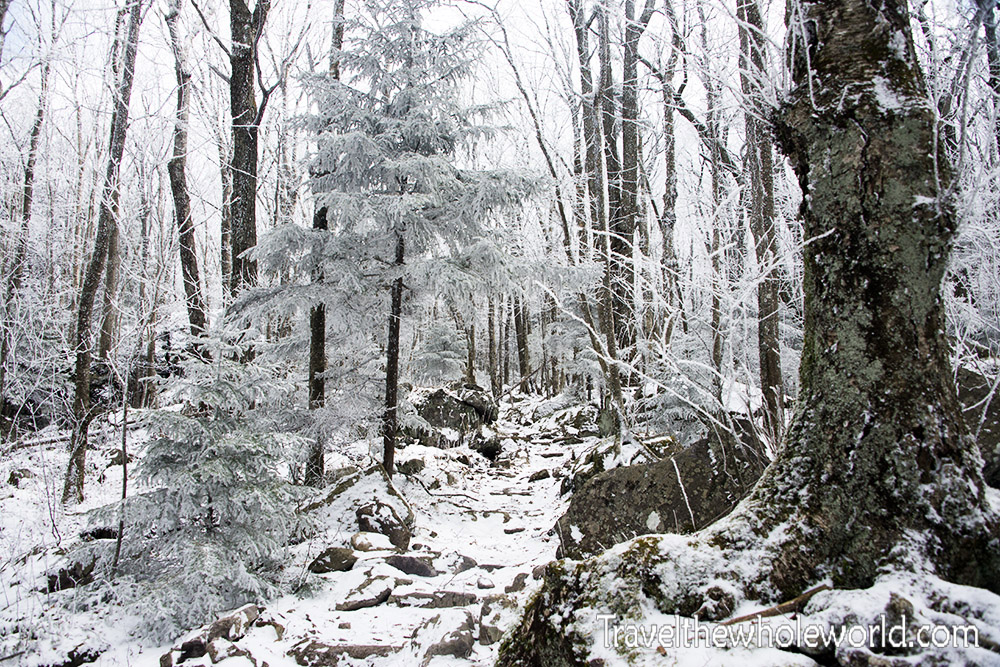 As we continued up the Appalachian Trail we encountered a bit more snow on the ground and even in the trees. We had planned to come on this hike nearly a month ago but canceled because of the lack of snow. I prefer the true winter experience over dead trees while hiking this time of the year. Despite the recent warm weather we decided not to cancel again and were prepared for disappointing scenery. Instead we had some of the most beautiful winter scenery I had seen in Virginia. These photos above and below were taken at about 4,000 feet (1,220 meters). 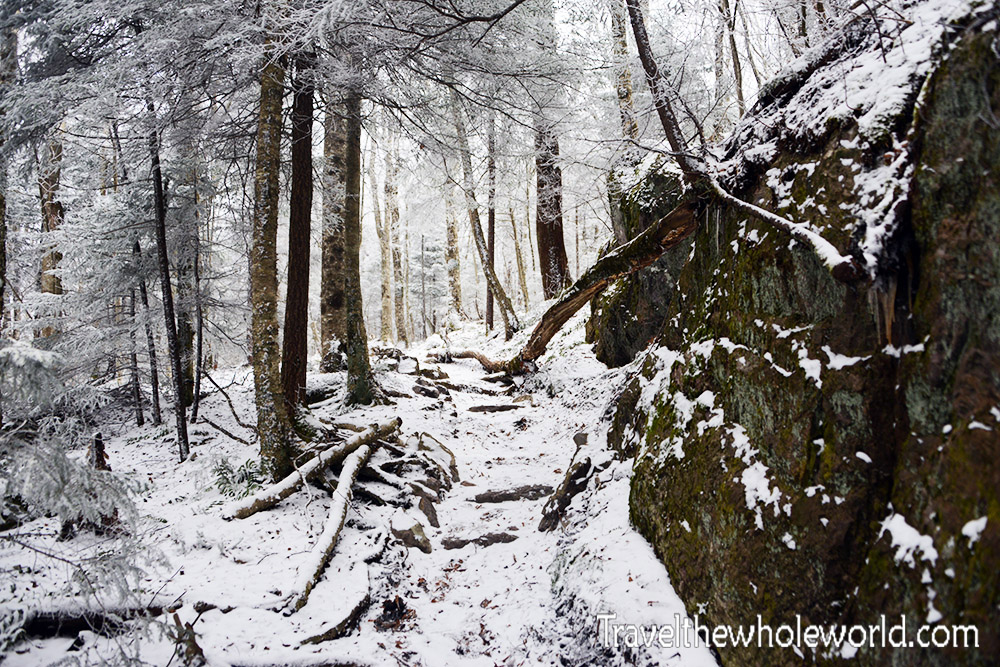 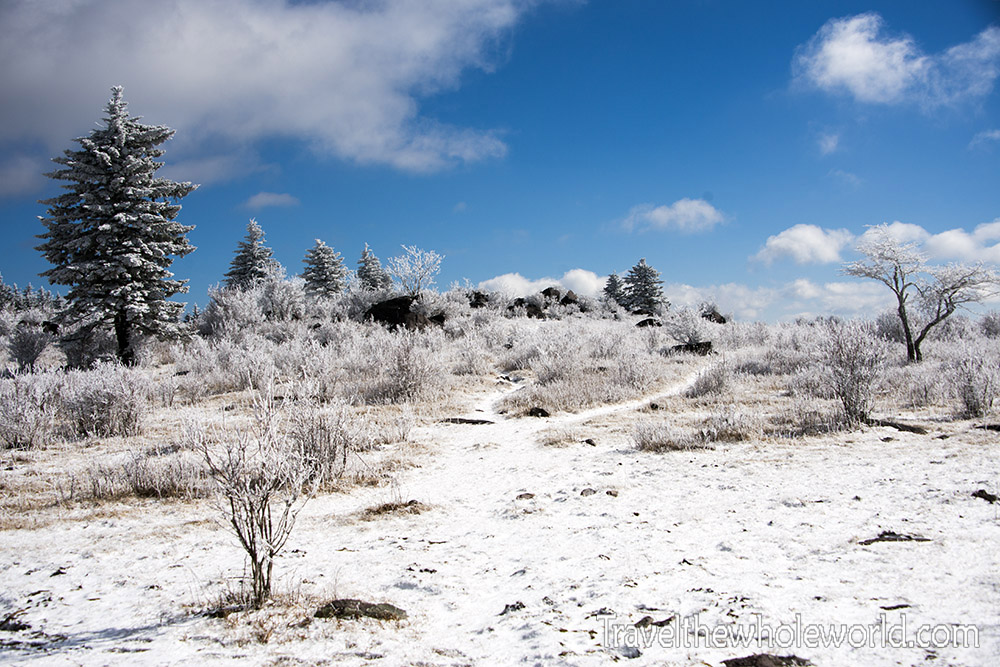 After a few hours of hiking we reached the highlands. These highlands are roughly at 5,000 feet (1,500 meters). Being at the same altitude of Denver this is pretty impressive for the east coast! As a native of Virginia I felt like I was in a completely different state. It was strange to be on a plateau a mile high in the sky without having to fly out west or to another country. 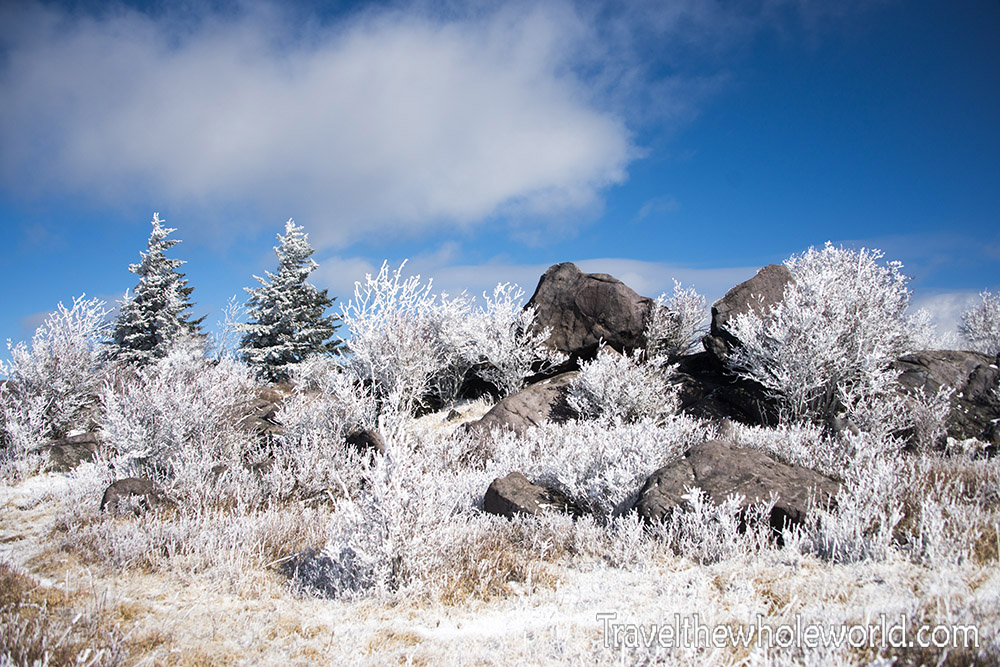 My friend and I stopped for lunch close to some rocky outcrop like these above. This area is also famous for the wild ponies that have roamed here for probably a century. I had no idea how hard they were to find or if we’d see them at all. We had a pretty good vantage point but saw no signs of life anywhere. 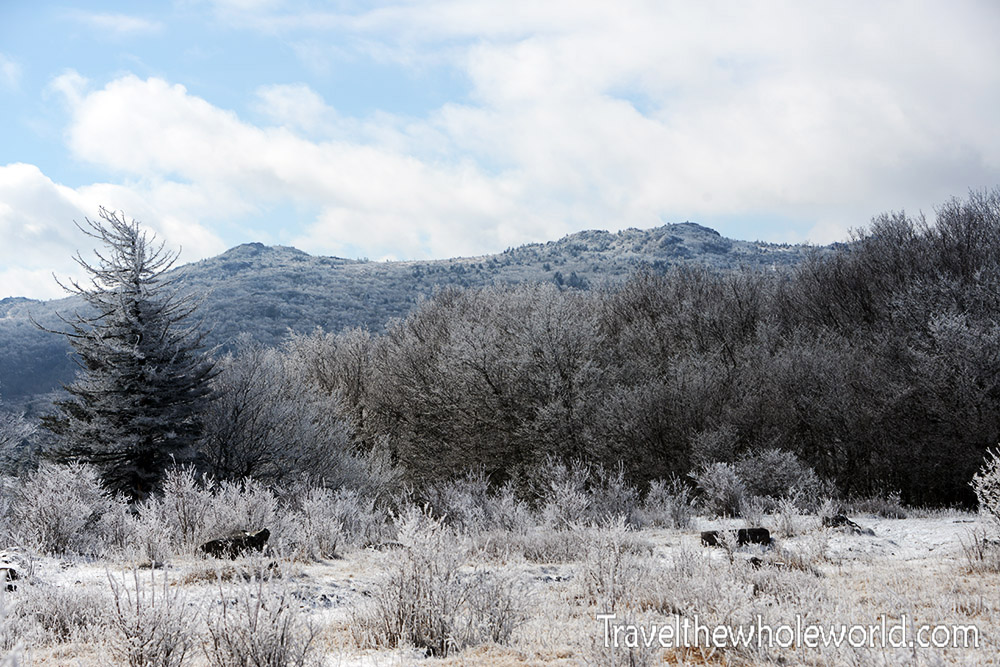 From the meadows we could see Pine Mountain which is the right hand peak above. Pine Mountain is Virginia’s second highest peak at about 5,400 feet (1,650 meters). Only about half a mile behind it is Mt. Rogers. You can see that these mountain tops are more like gentle hills in the highlands rather than dramatic peaks. 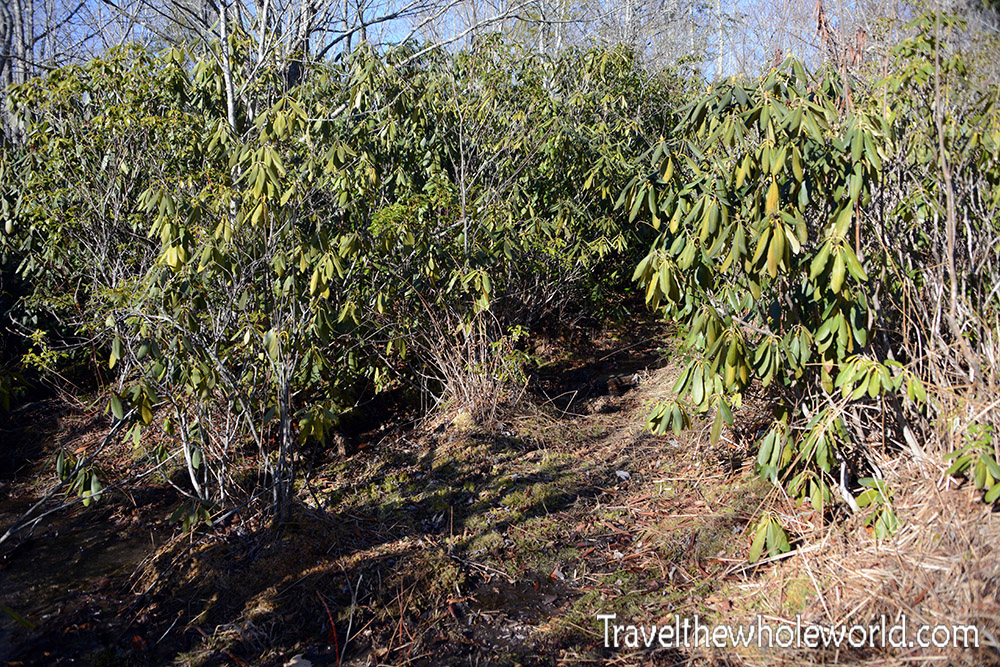 Instead of going directly to Pine Mountain my friend and I had created a 15 mile circuit. We did this to make the high more challenging, and at one point descended all the way back to 4,000 feet 1,200 meters). From there we entered a much warmer and wetter environment. It was such a difference from the snow photos we had taken just hours ago. At one point we decided to go off trail and passed through some swampy area full of green moss and rhododendrons. We had both assumed that the sun in the mid-day had melted everything and there would also no longer be snow at the highlands. 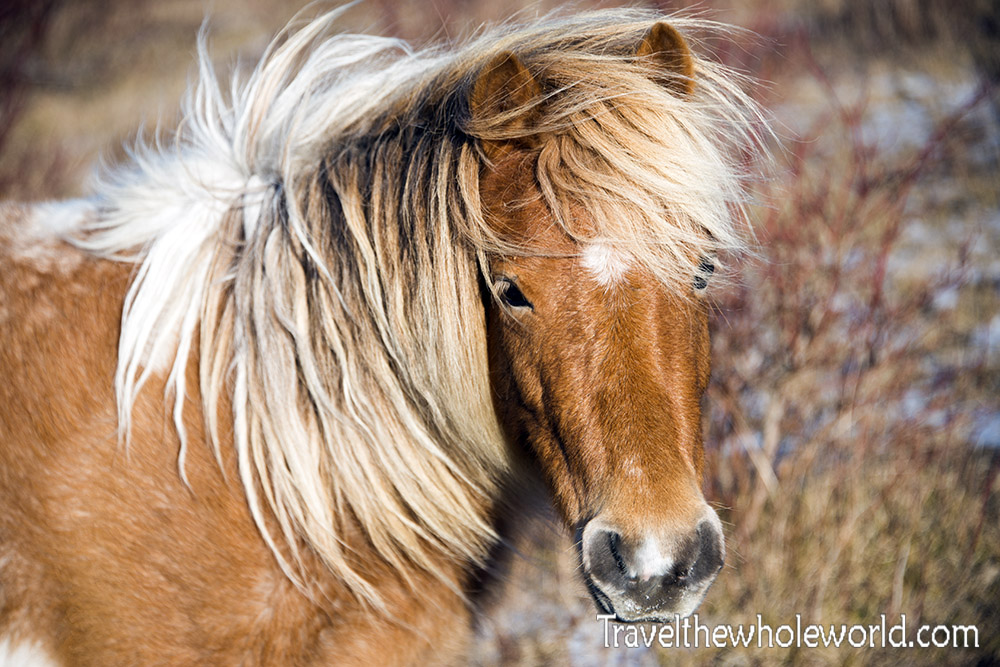 It was on our way back to the highlands that we saw our first pony in the distance. We were both unsure if the ponies would see us and immediately run away like a deer. We approached cautiously, and the closer I got the more I realized they were not bothered by our presence at all. At first we had seen only one, but as we approached it we saw others nearby. Some of them weren’t shy at all and immediately walked right up to us. 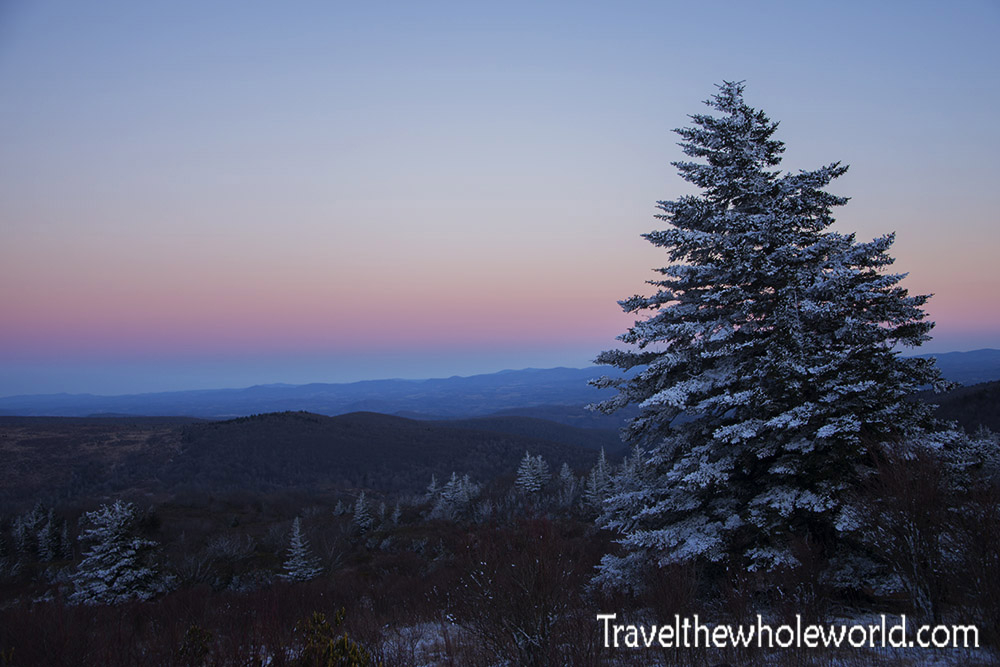 At this point we had hiked nearly 15 miles (24 kilometers) so we decided to head towards Pine Mountain and camp just below the summit. The weather was cooling off and temperatures dropped to 12 degrees (-11C). We had some beautiful views of the surrounding mountains from our camp site. 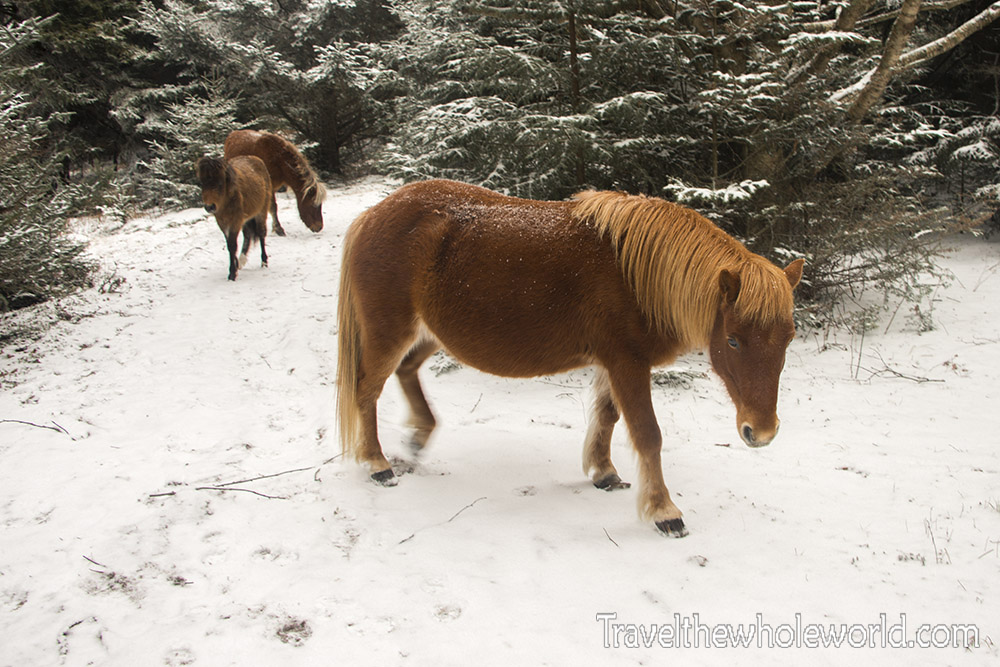 This next morning we woke up early and headed to the summit of Mt. Rogers. We had expected our pony experience to be over, but we immediately came across a pack of five ponies once we entered some woods. It was snowing this morning, so it made the experience even more amazing. Like the other ponies we had seen, these guys were not shy at all. It seemed they expected food from us, but when we didn’t provide any they were happy being petted. 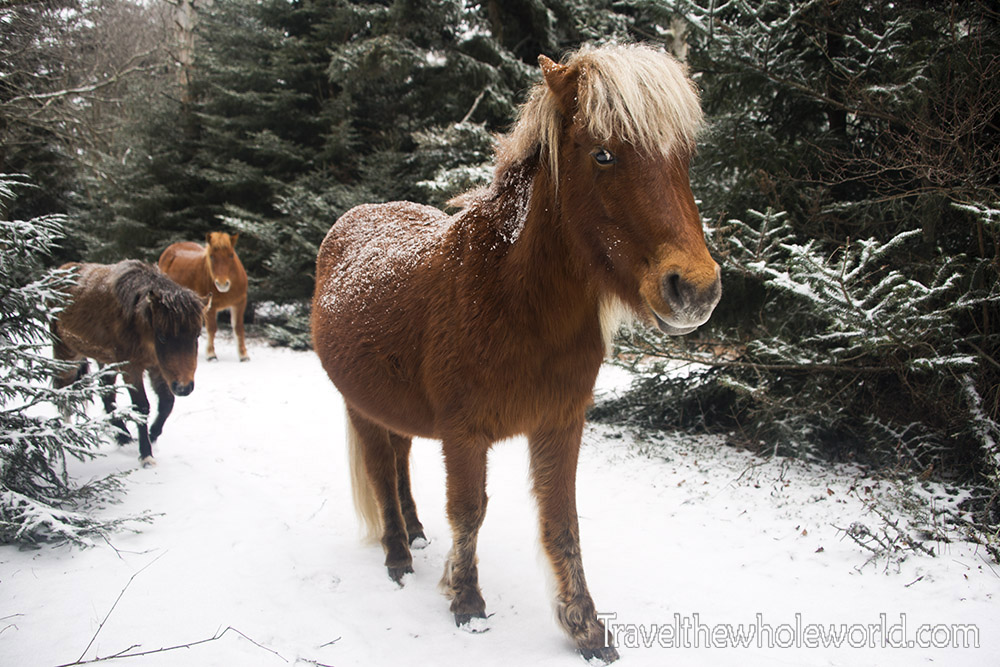 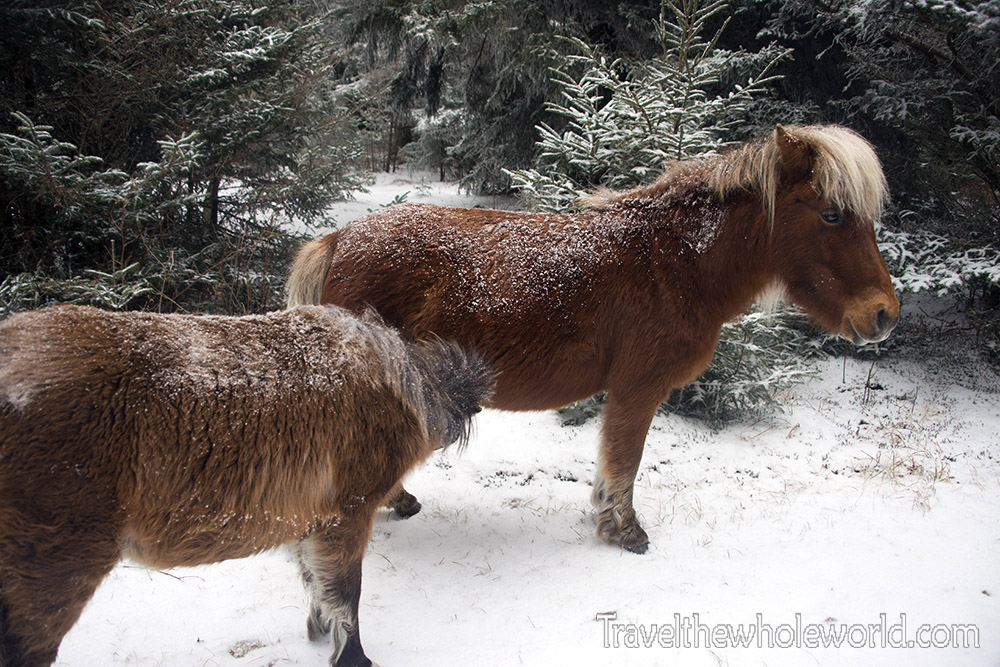 We spent more time hanging out with the ponies we encountered this day. In our short time with them we were able to observe some of their behavior. Above is a young foal still drinking milk from its mother. One of the other ponies for some reason didn’t seem to get along with the rest. He was either the alpha male or mentally disturbed. He would frequently walk up to the other ponies and try to buck them. The other ponies would always walk away but never run. They didn’t seem too terrified of the crazy pony, more just annoyed. 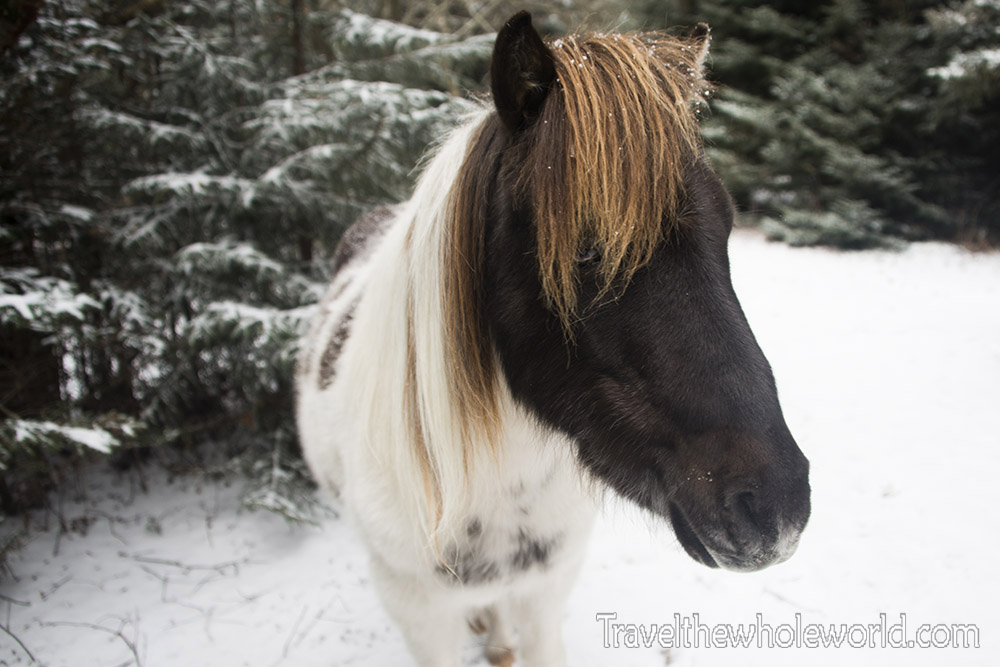 This pony was a young male and didn’t seem to have any confrontation with the crazy pony. Of course we weren’t there long enough to tell, but he seemed to be more relaxed than the rest. The way his hair slicked over his eye I felt that if he was a human he would be some type of punk teen jamming out to grunge music. 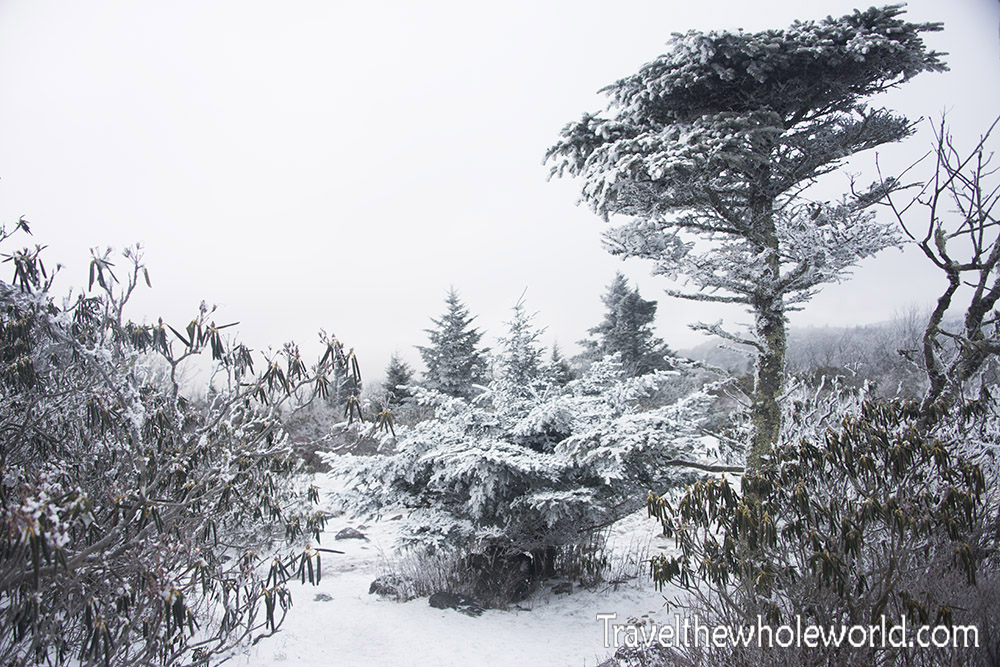 We reluctantly left the ponies for good and continued on with our mission. The snow was coming down steady but not too strong to be annoying. I continued to be surprised by the unique terrain that we were hiking in. At this altitude there were no more deciduous trees; only firs. 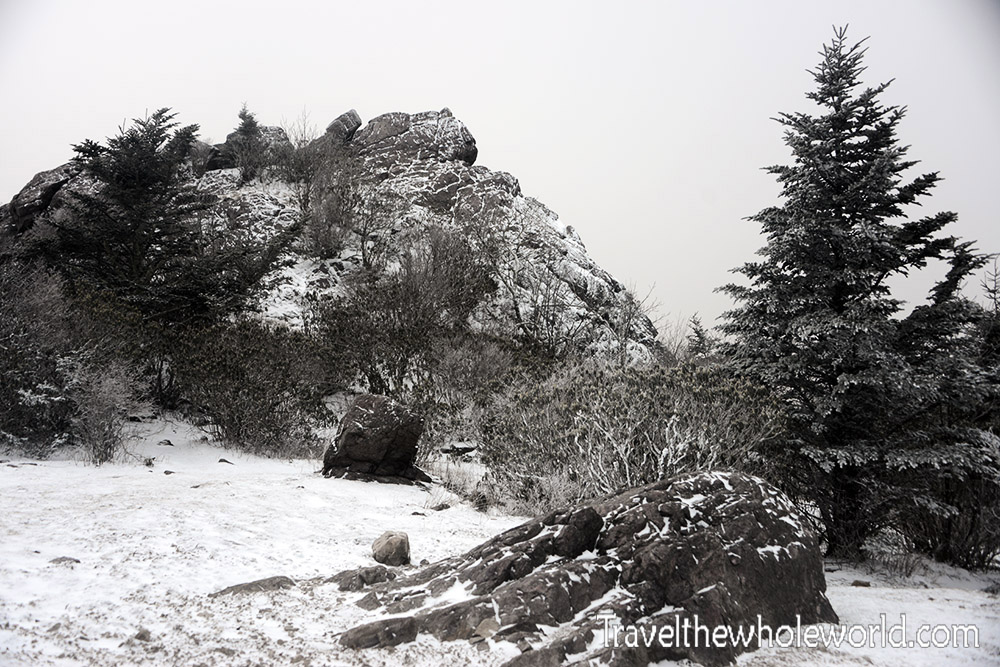 When we were pretty close to the top of Mt. Rogers we started to come across some large rock formations. As we continued upwards we had to leave the Appalachian Trail to take a short path that leads to Mt. Rogers’ summit. Photographed below is a shot from the summit trail. It’s only about half a mile in length, but has some rocky terrain and thick pine forests. 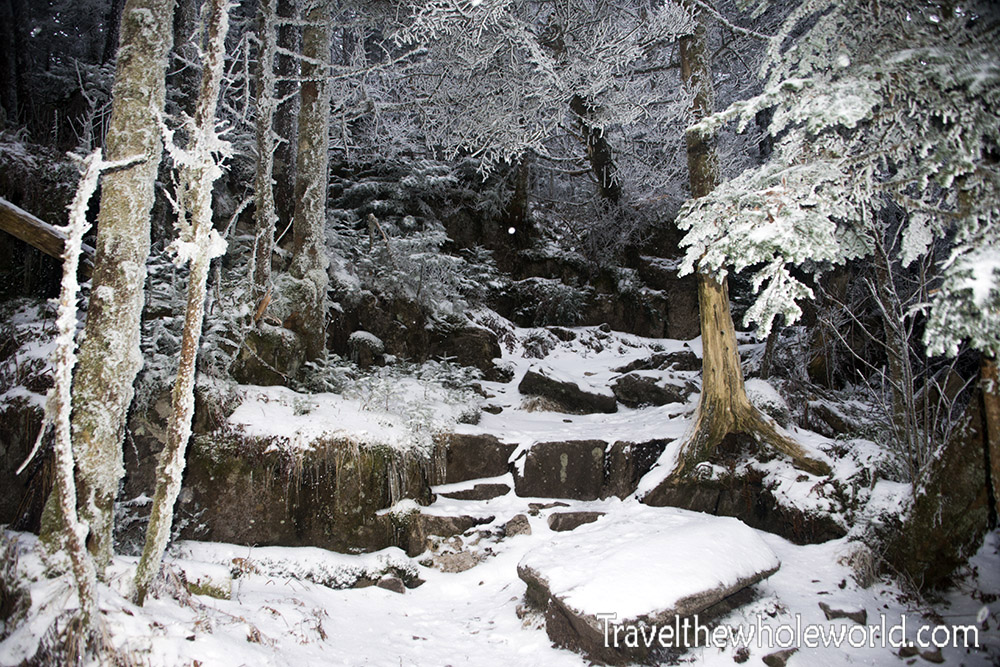 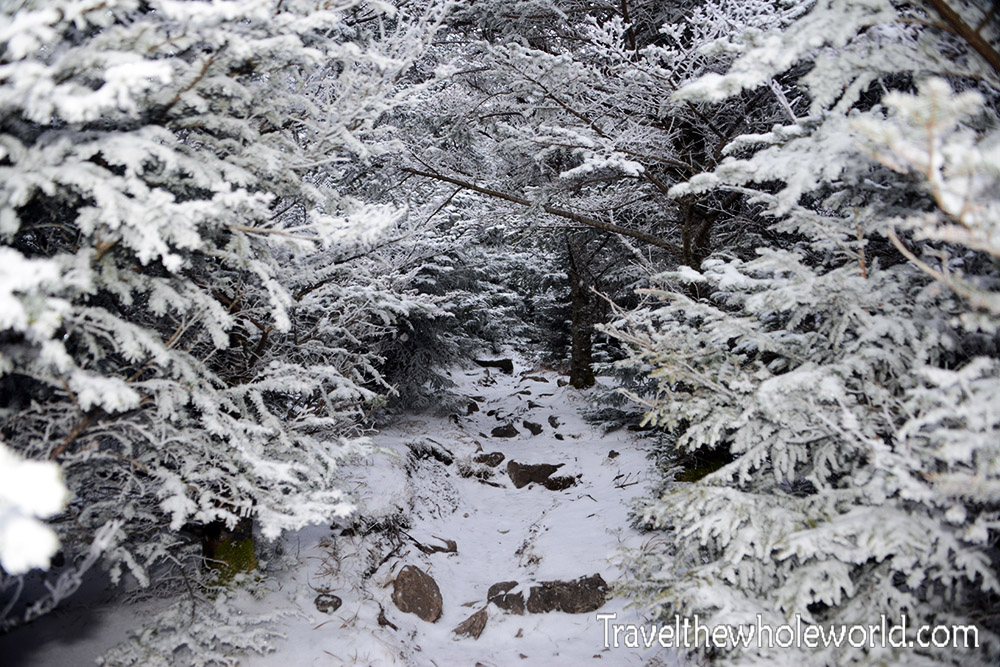 Once on the summit trail, you enter a very unique ecosystem. Although a very small area, elevations above 5,500 feet (1,675 meters) are home to the endangered Fraser fir trees. Because of their limited habitat, Fraser fir trees only occupy about 100 square miles (250 square kilometers). These rare high altitude forests are the second most endangered ecosystem in the United States. The Fraser firs once covered vast areas of the United States during the ice age. Once the ice age ended, they could only survive in areas that have arctic like winters that is too harsh for any competition. While parts of Virginia along the coast may go a year or two without even seeing snow, altitudes over a mile high easily brings subzero temperatures each winter. 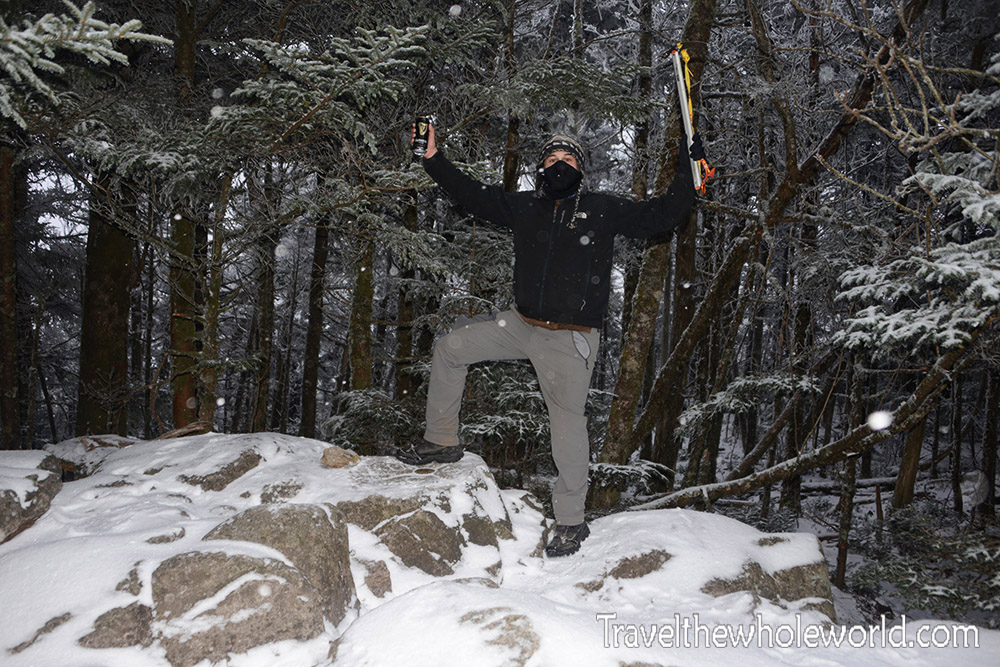 A short time later my friend and I reached the top of Mt. Rogers. This for me was peak #4 in my goal to hit all 50 state high points. Sadly the top of Mt. Rogers is covered in trees so there are no views directly from the summit. At 5,729 feet 1,746 meters), Mt. Rogers is still one of the highest peaks on the east coast. So far this is definitely one of my favorite state high points because of the unique highlands and pony experience!