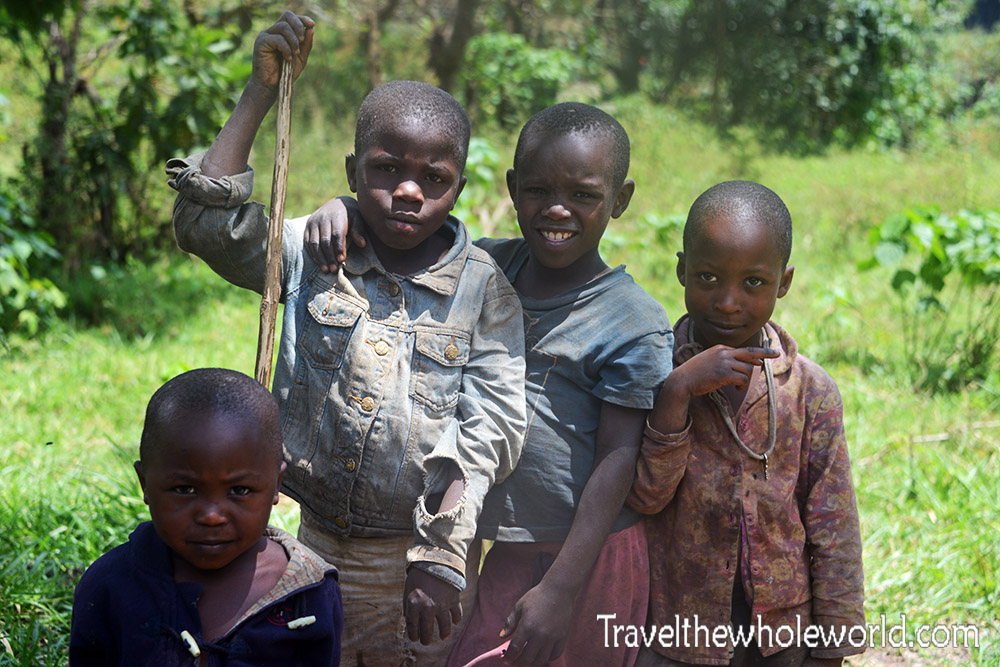 Nearly everyone who visits Rwenzori National Park will make a stop over in Kasese. The town is just an hour away and the base for most trips to the National Park. I came to Rwenzori with only the clothes on my back because my airline had lost my luggage. Most of my time in Kasese was spent trying to get money from my bank and arrange a porter to meet me in the mountains with my climbing gear. That’s right! I started climbing Mt. Stanley wearing jeans and a t-shirt! The only photo I took of in the area were these kids just outside of the Rwenzori entrance. 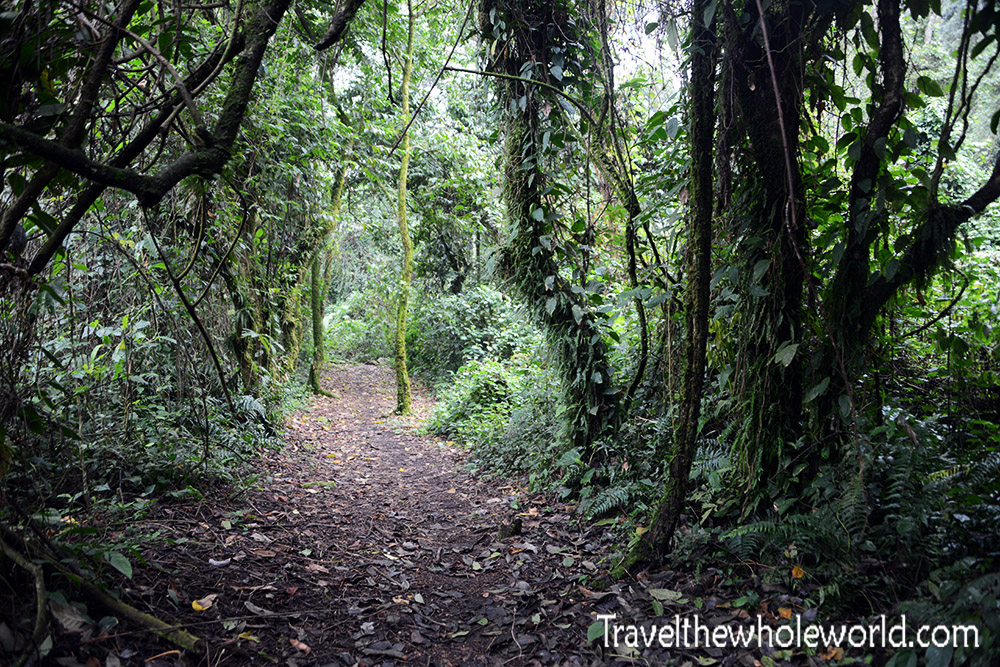 Those kids have grown up here having no idea how special this place is. I really believe that Mt. Stanley is one of the world’s most unique mountains. There are few places in the world where you naturally start your climb in a hot and humid rainforest and end up in a true alpine environment where you need rope, crampons and an ice ax. As a matter of fact, this could be the only mountain in the world that is climbed in such circumstances! My first photo shows the easy trail that begins in the rainforest at an elevation of about a mile high (1,640 meters). This is probably the flattest section of the entire climb. But even though the rainforest is easy, it still has some decent elevation gains for the first day. 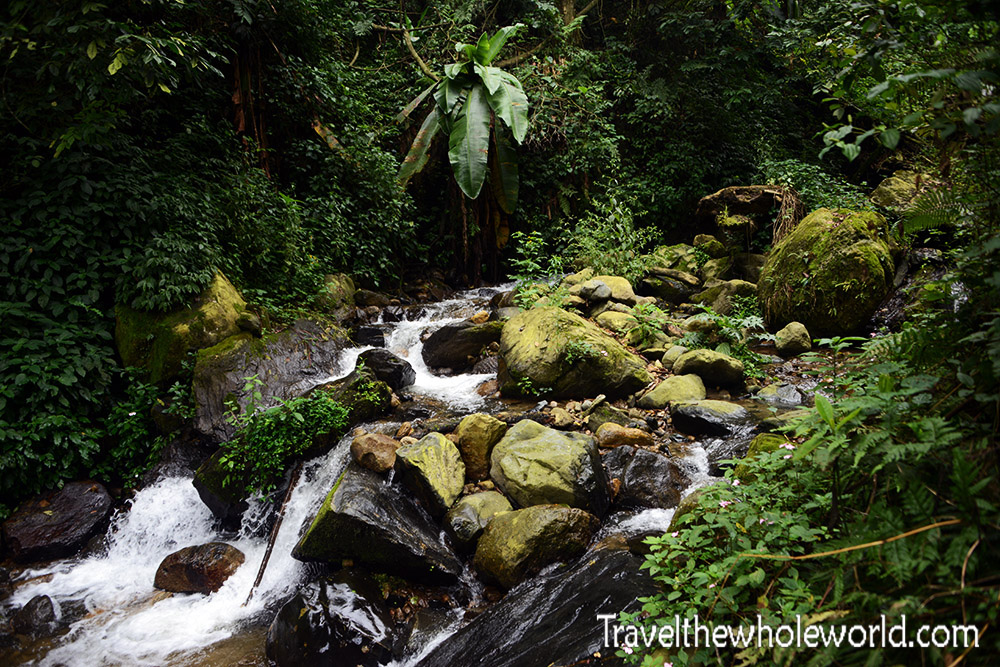 There are seasons that have better weather in Mt. Stanley, such as February when I climbed. Usually you’ll see some serious rain regardless of when you come. On the first day we had the hardest rain of the entire trip. The forecast had called for about 2 inches of rain, (48 mm) in a single day! Since the trails are good at the lower elevations there wasn’t much mud or slippery areas despite the heavy downpour. This photo was taken before the heavy rain started. Once it started pouring, nearly all the creeks were raging. The ones that might be flooded all have bridges, so you don’t have to worry about getting stuck or wet from sloshing through a overflown creek. 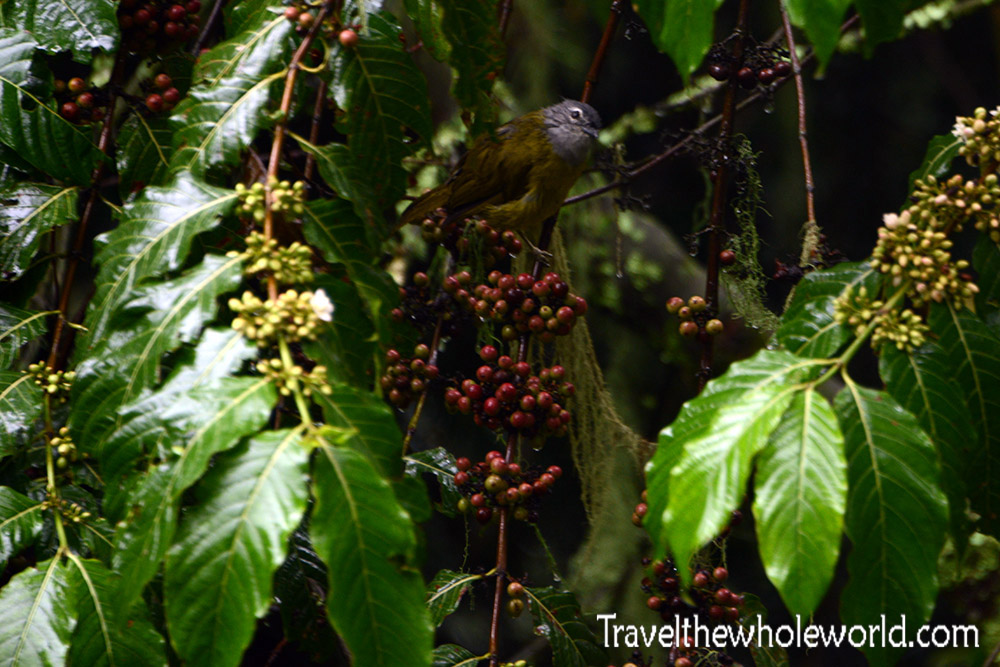 I’m not sure what the wildlife thinks about all the water here. This bird was soaking wet and didn’t seem to happy. I saw several species of birds in the rainforest of all colors. The rain and thick foliage made it pretty challenging to capture any of them with my camera. 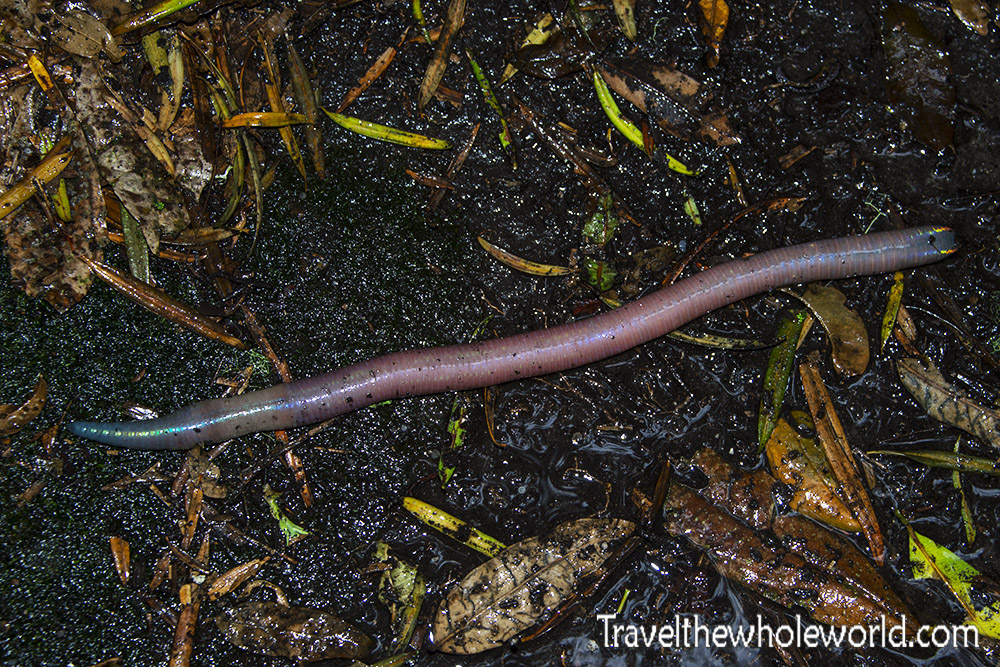 One creature that must be happy for all the water are these giant worms. I wish I had held this thing up so you could get some perspective. The worm was about 18 inches (45 cm) long! It was so huge I seriously thought it was a snake at first. I saw a few of these guys along the trail, but this guy above was by far the biggest. When I got home I checked to see if these were the largest worms in the world. Turns out they aren’t even close! Species in other parts of the world can get nine feet long, which is about 2.7 meters! 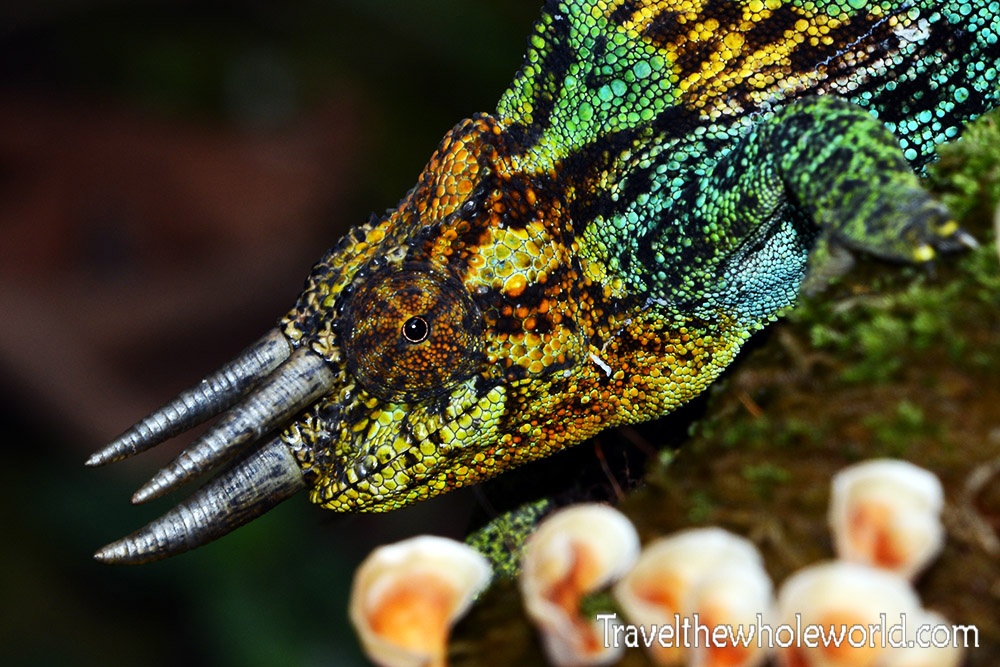 Something more interesting than giant worms were Chameleons. I had seen some on the other side of the Rwenzori mountains in the Congo a few years back. None of the ones I saw in the Congo had any horns though. To my knowledge, these species are called the Rough Chameleons, and are part of the Triceros family. These guys are seriously everywhere, so if you keep your eyes open you’re nearly guaranteed to see one. This chameleon below actually changed colors as I was photographing it. I put the pictures side by side so you can see the difference in only a matter of seconds. 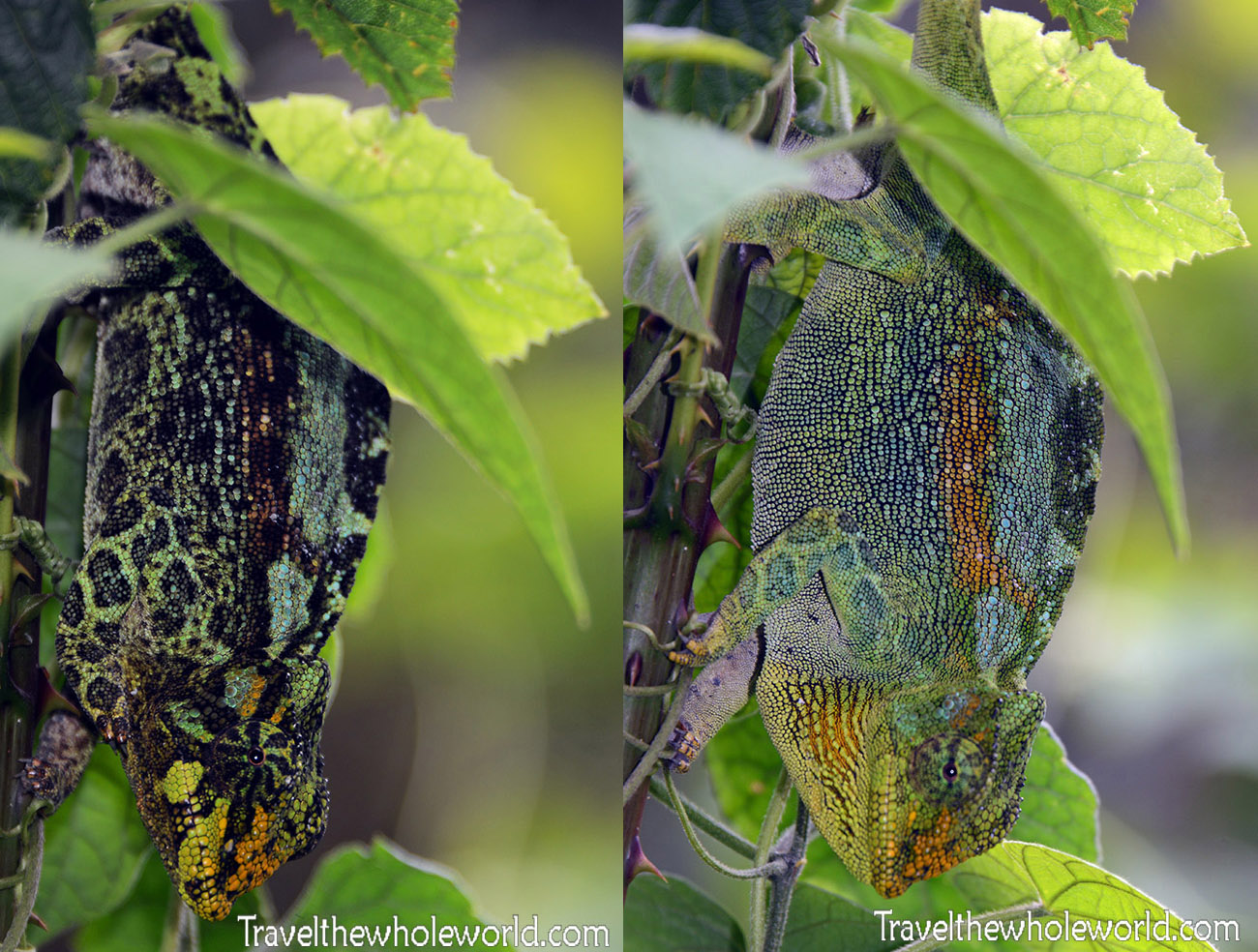 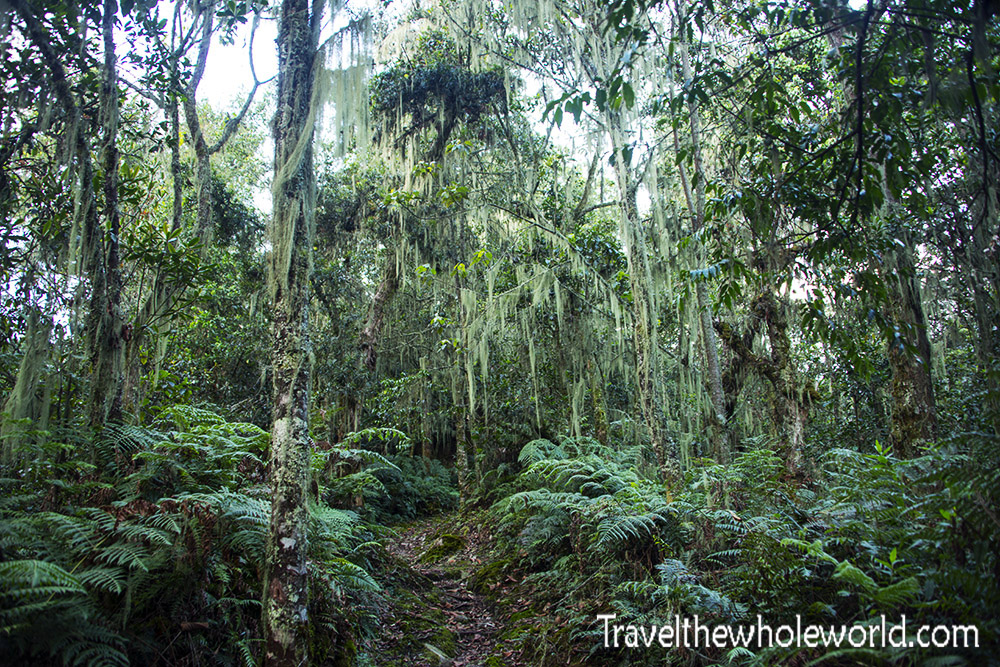 After about four hours of hiking I reached the Camp Nyabitaba where I’d spend the first night. You certainly feel like you’re pretty deep in the woods by now, but amazingly this place has cell phone reception. Camp Nyabitaba is located at 8,700 feet (2,650 meters). It’s a pretty warm and comfortable camp with several large huts. The trek here is by far the easiest day both because of the gentle trail and the temperature. The next day I left Camp Nyabitaba in the morning and continued on towards Mt. Stanley. The rainforest on this day was a bit different because of the elevation. There was a bit more moss, and the trees were not nearly as tall as they had been on the first day. 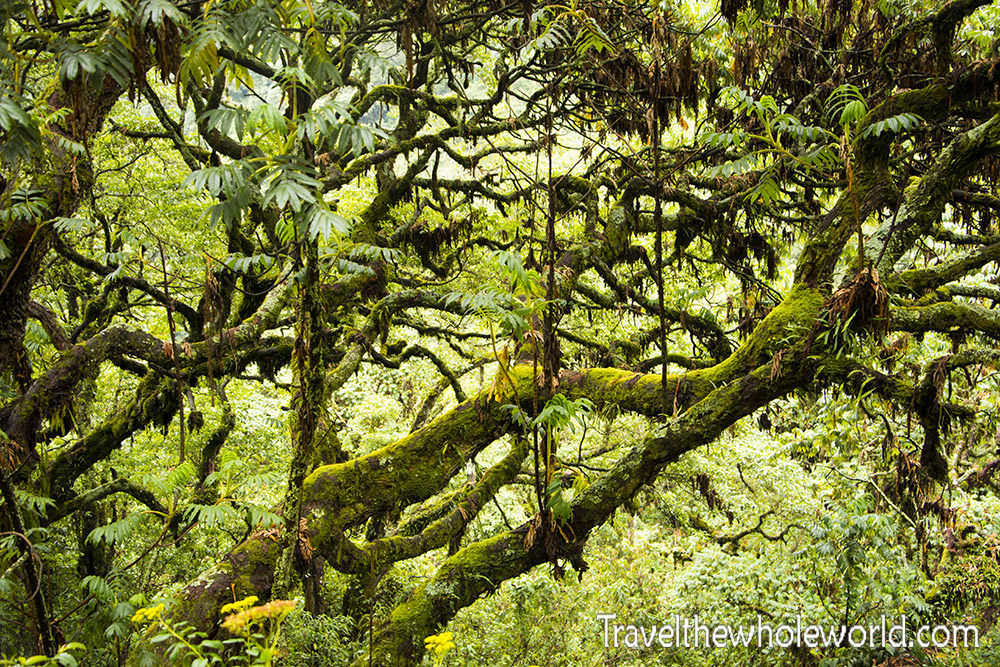 The trail the second day started off much steeper than the first. One of the steep areas I climbed gave me a good view looking down where I could see some of the trees that were now nearly eye level. They were nearly entirely covered in moss. 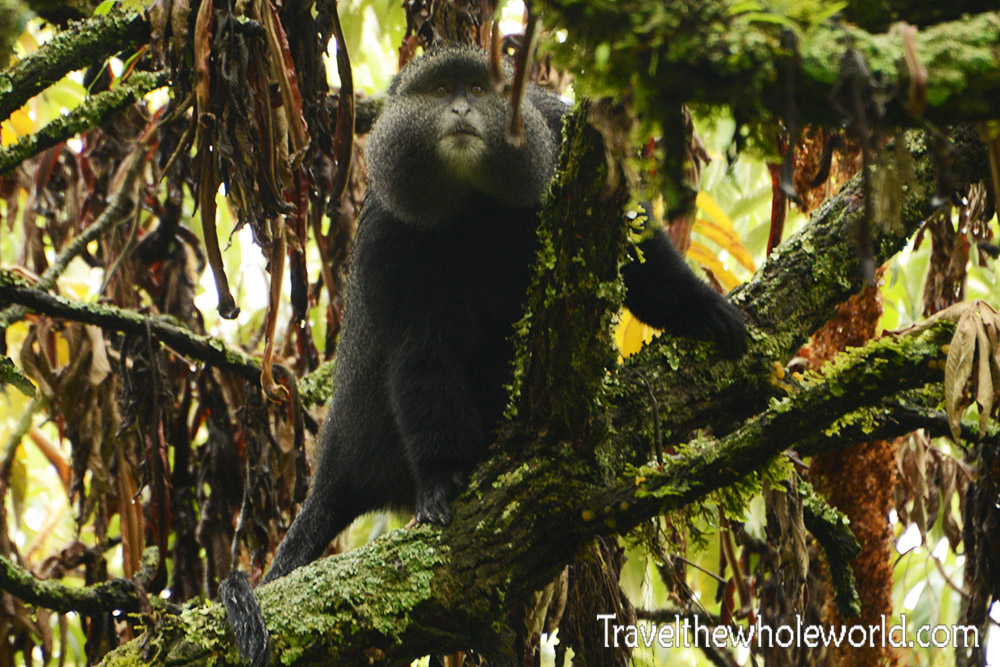 I was lucky because I just happened to hear some rustling around of branches and saw this large monkey in a tree. The monkey was alone and didn’t seem to care about my presence. I had my camera on full zoom so he was much further away than he appears in the picture. I later saw some other monkeys but they were so far away I had no idea what species they were or looked like. This guy has the facial features of a golden monkey, but as you can see he isn’t so gold himself. So I’m not sure what species he is. 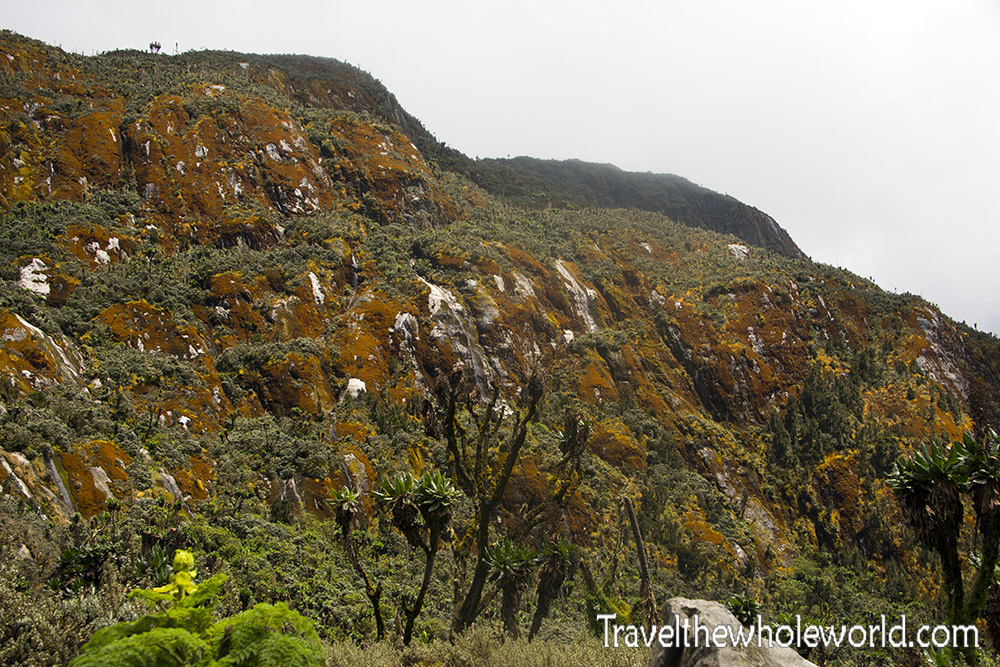 The scenery changed quickly and dramatically as I approached 10,000 feet (3,000 meters). There were still plenty of trees, but most of them appeared as large bushes. Colorful moss in shades of orange and reds covered the rocks and made some beautiful scenery. 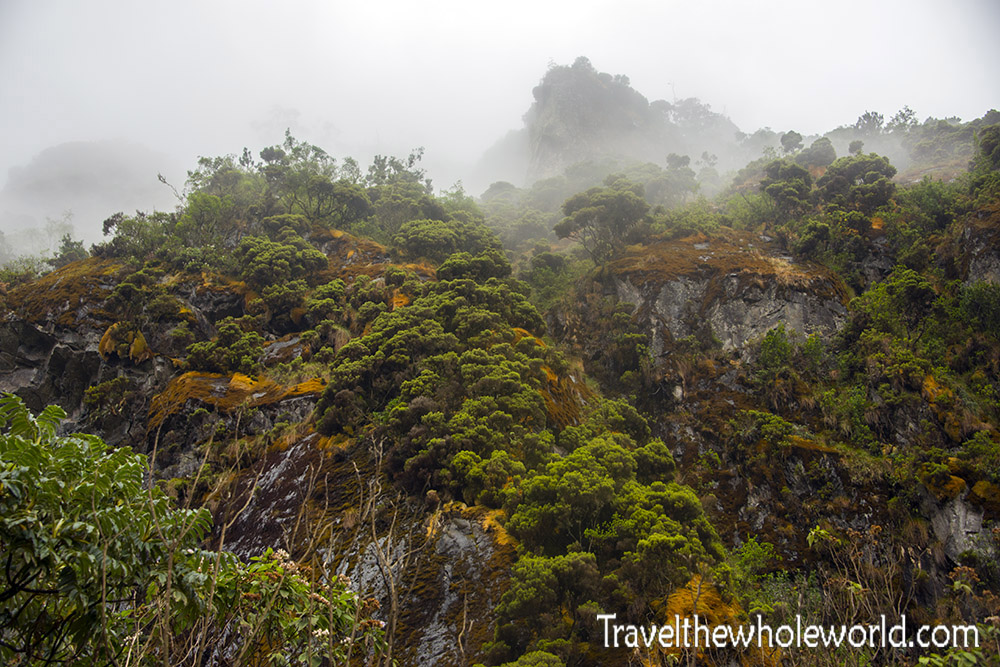 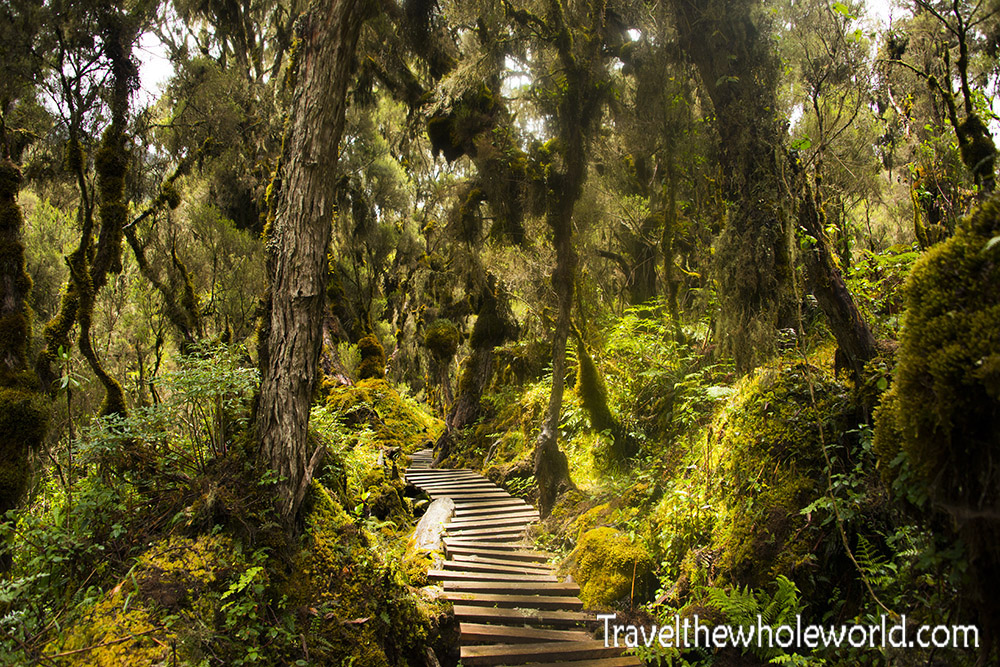 Right around 11,000 feet (3,350 meters) you’ll enter the mosslands of the Rwenzoris. Luckily there are boardwalks in the sections that might be a difficult, so the trekking here is easy. It had been over half a decade since I was last in an environment like this. Although in that expedition in Carstensz Pyramid, the climb was ten times harder, I had always found the mosslands beautiful. I was definitely happy to see them again despite the nightmares of Carstensz that they brought back! 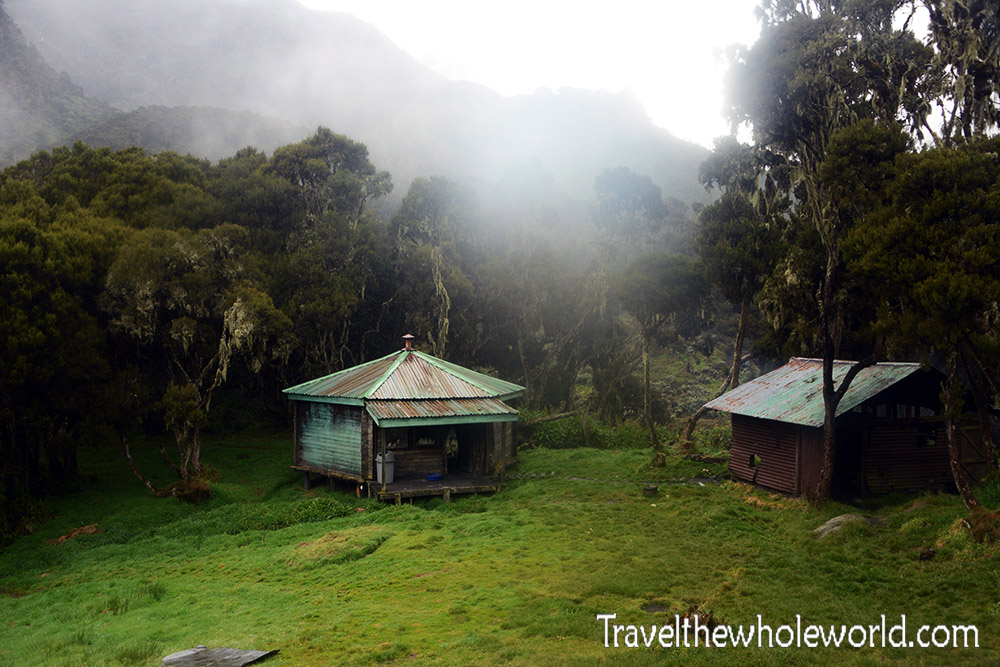 At the beginning of the mosslands you’ll reach John Maate Camp at 11,200 feet (3,415 meters). All the camps I stayed at in the Rwenzoris were actually huts. I had expected to be in a sleeping bag and tent, but the huts were an enormous luxury. They were of pretty high quality, with lots of space inside and well maintained. The John Maate hut had at least a dozen beds available, but I had the place all to myself. 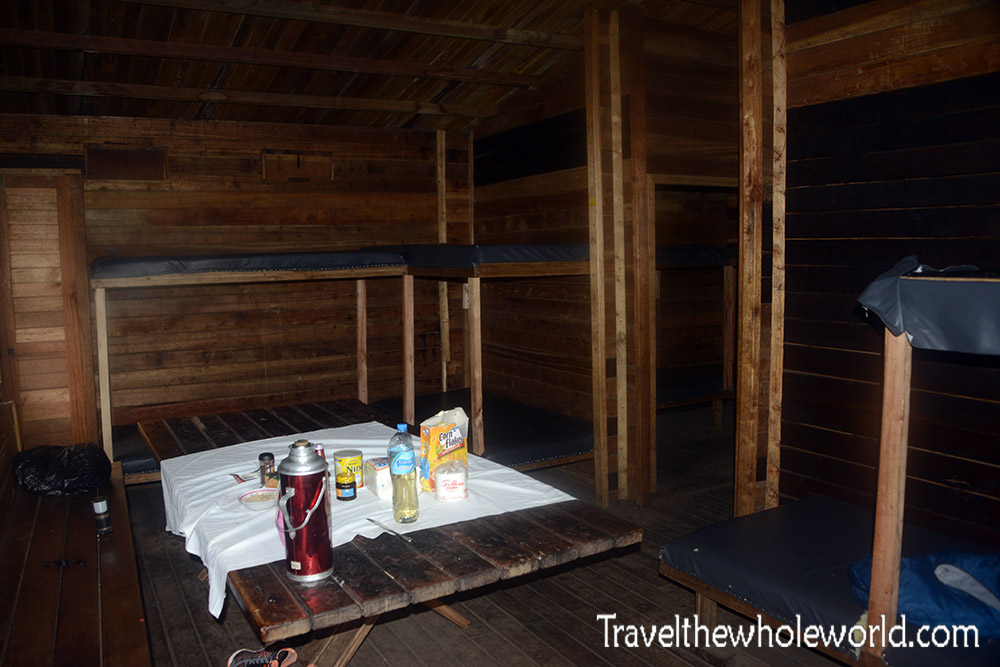 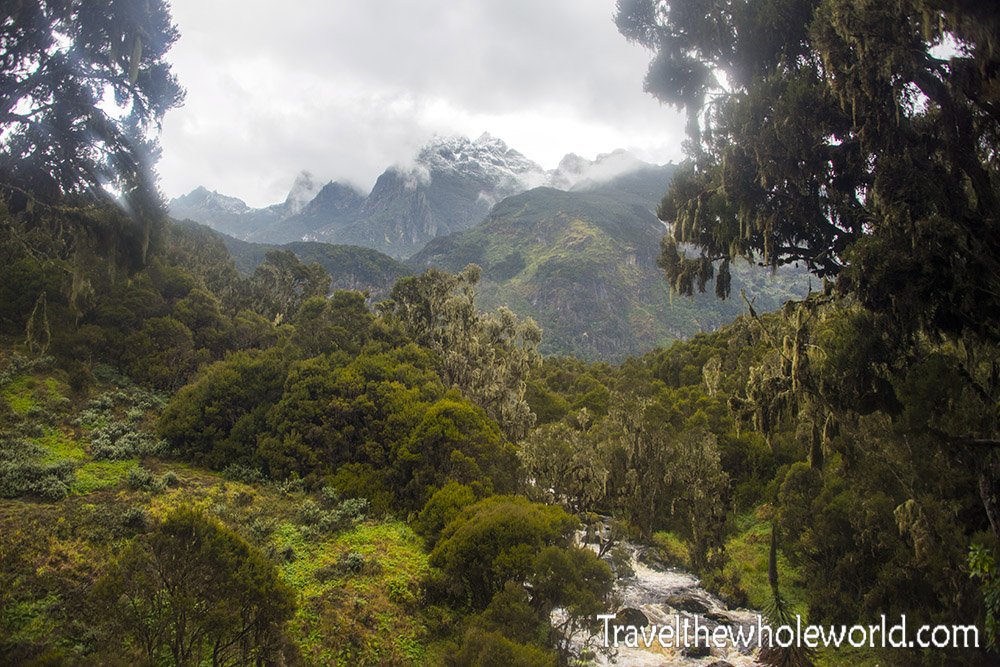 Directly from the John Maate camp, I was able to get my most beautiful view of the entire trip. From here I could see the first snow of the Rwenzoris in the distance. The goal for tomorrow was to skip a camp and go all the way to where the glaciers begin. Looking out it seemed an impossible feat for one day! 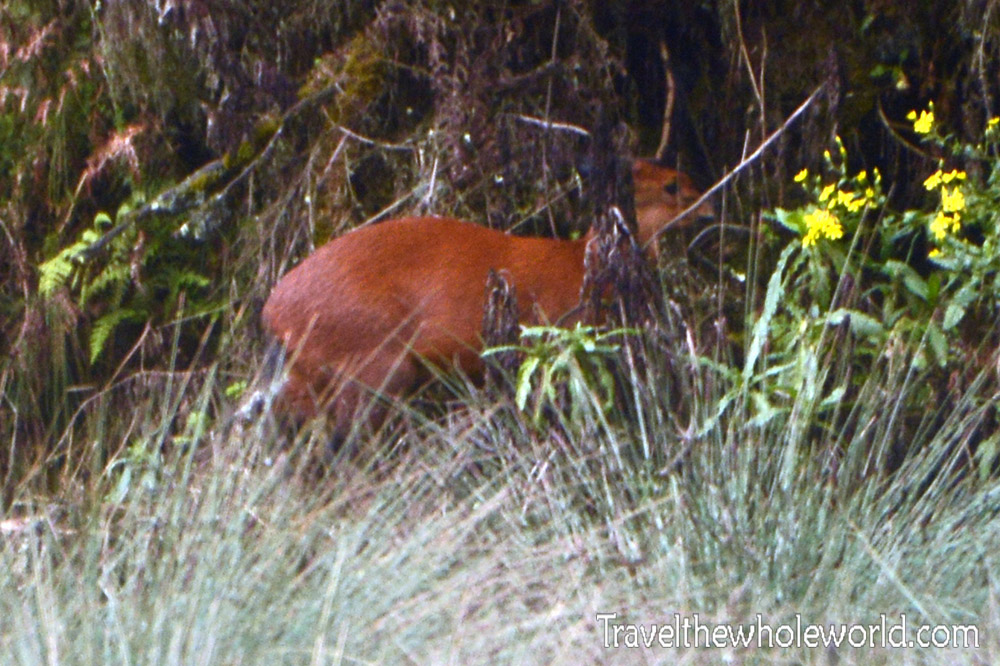 After leaving John Maate camp the next morning, we had to cross the Lower Bigo Bog. This bog is about a mile (1.6km) in length and is completely crossed via another boardwalk. Towards the very end of the bog I came across a Red Dik-Dik. I saw some other ones on the way back but they were deeper in the woods. 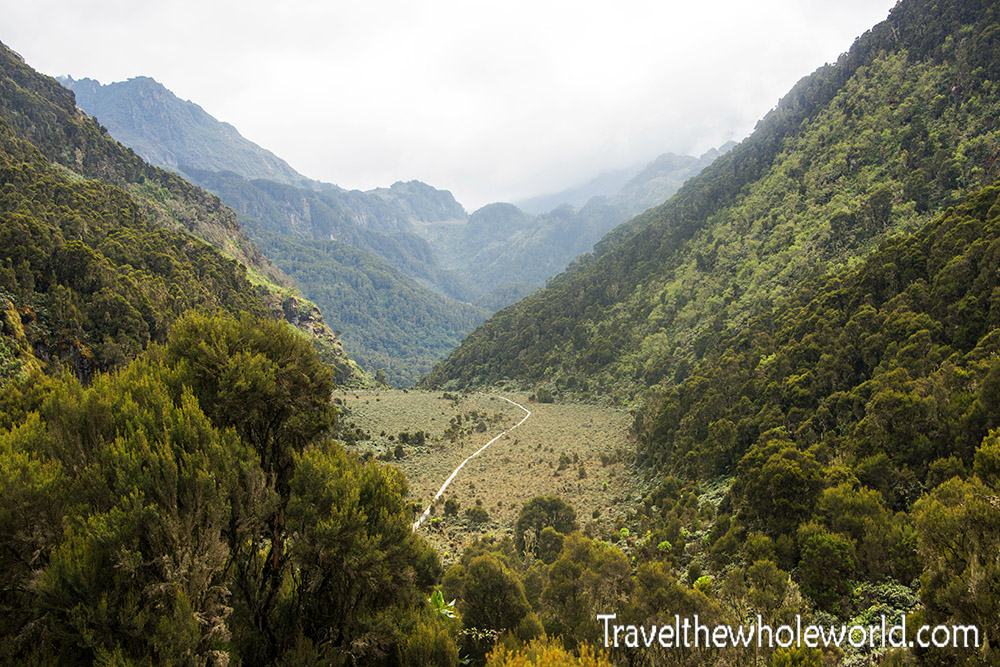 After the never ending boardwalk, I had to climb some steep terrain. I got some great views here looking back that showed the entire bog and boardwalk. My guide told me that the boardwalk was created in the early 1990’s, so before that this had to be crossed by foot through the deep mud. I’ve done that before and I can promise it’s not fun! 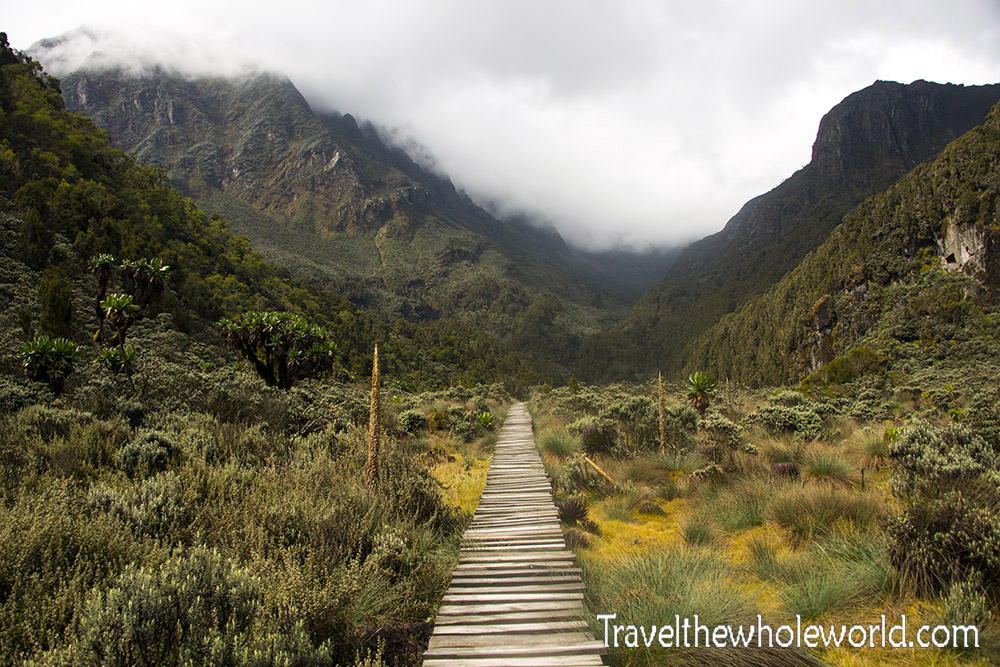 After some more time I reached the Upper Bigo Bog which is slightly longer than the first bog. Likewise it also has an extremely long boardwalk to take you across. 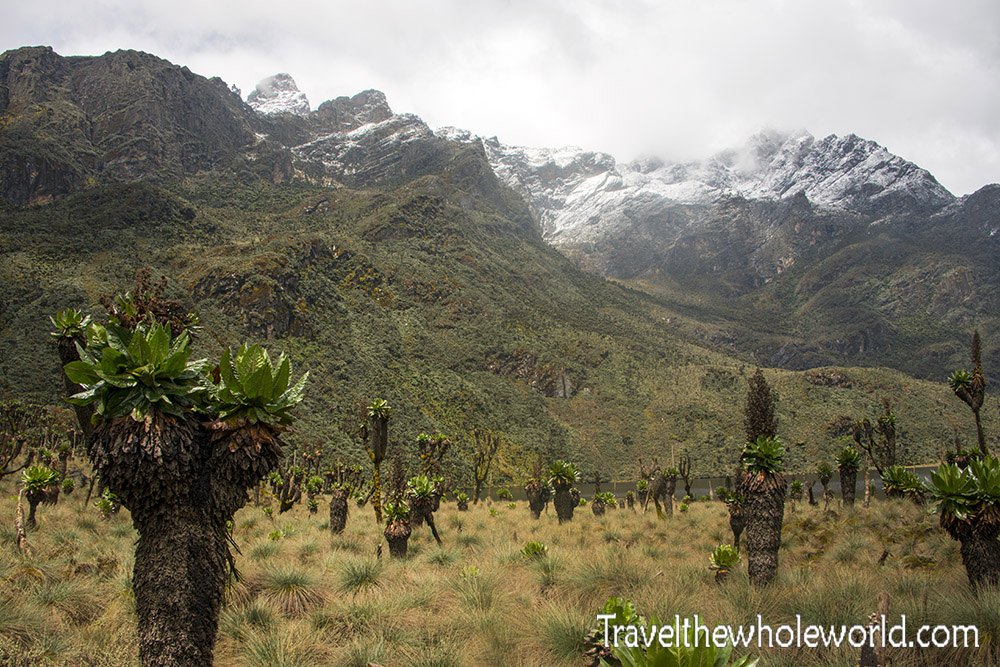 After the boardwalk, you’ll hike along a short trail that runs close to Lake Bujuku. The trail ended into a short bog that has to be crossed without a boardwalk. Again I want to emphasize how much easier this was than the bogs in Carstensz Pyramid! From here you’re pretty up close and personal to the snowy peaks above you. Normally this place is where you call it quits for the day, but our goal was to skip Lake Bujuku and head all the way to Camp Elena. 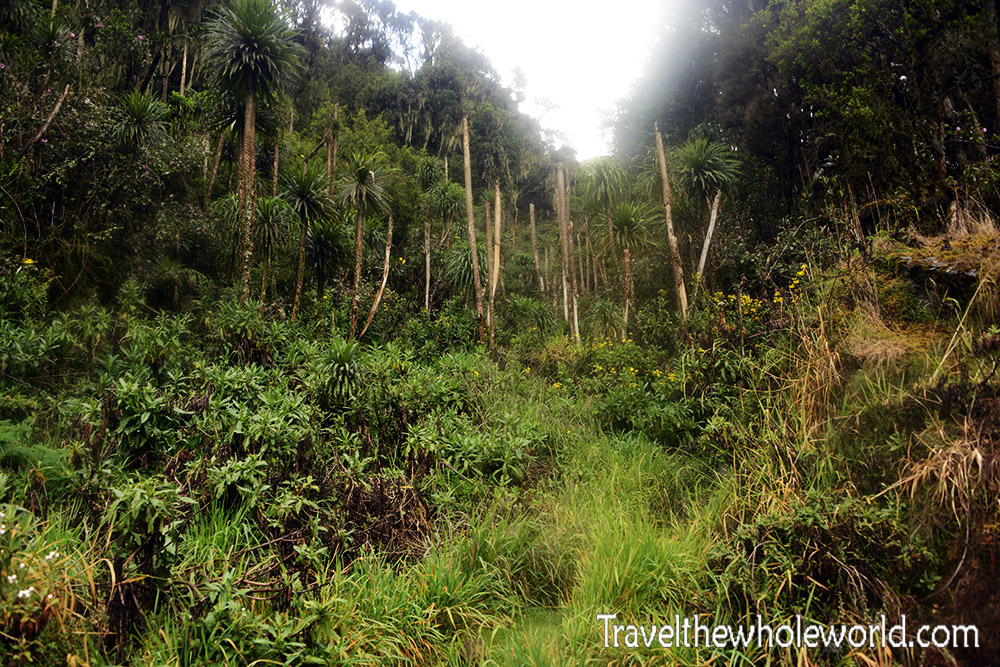 After the short bog, I had some of the steepest terrain on the journey so far. It doesn’t look like it in the photo above, but this is where it started to get nasty. Shortly after, we ended up hiking some incredibly steep and muddy terrain. It started to drizzle making the hike more annoying. 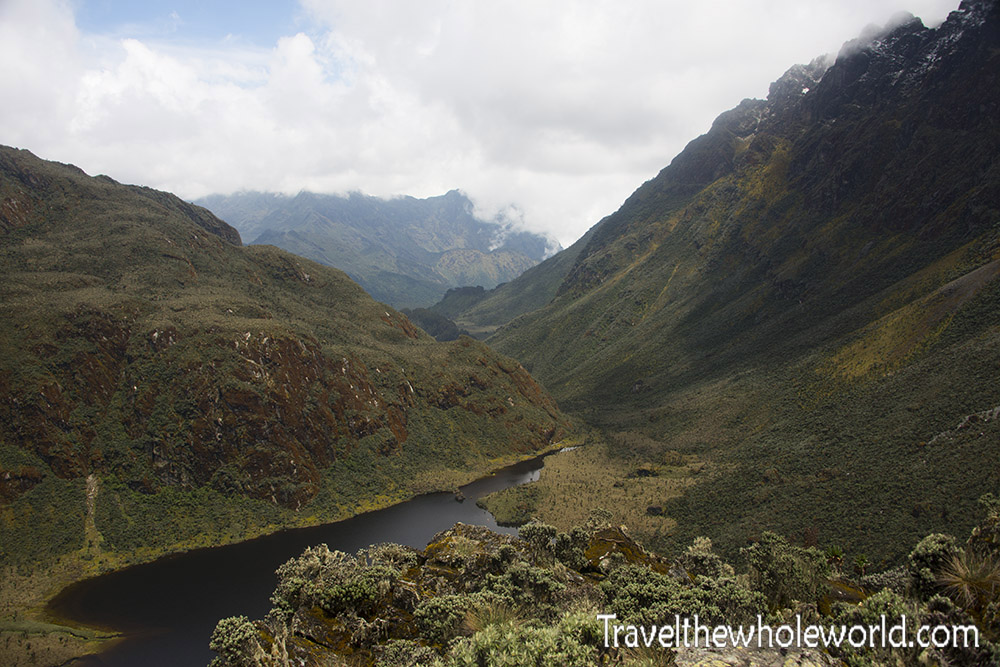 The reward for climbing up so quickly was the great views we got of the lake. In the photo above you can see the valley that we exited in earlier in the day at the top of the photo. We traveled through the right side of the photo away from the lake and then approached the steep terrain that felt like it was going nearly vertical. Below is a shot of Lake Bujuku. It its at 12,900 feet (3,930 meters). My understanding is it does not harbor any fish or amphibians here! 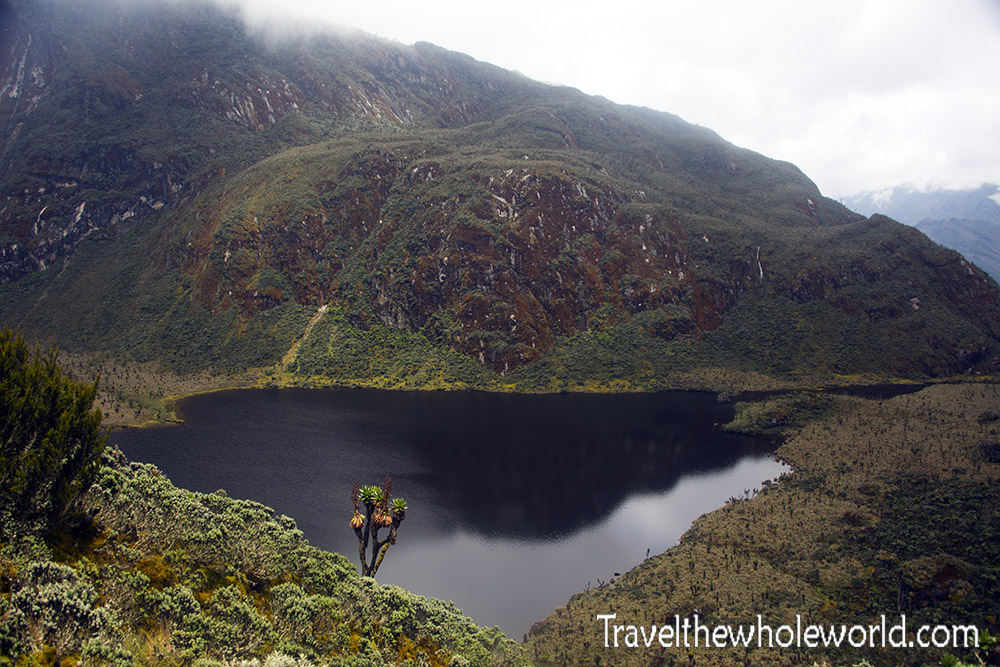 Although I still had some time before I reached Camp Elena, soon after I started to see snow on the trail. I’m considering that section of my adventure the beginning of my climb up Mt. Stanley.

The Adventure Continues! From the lowlands to the summit!