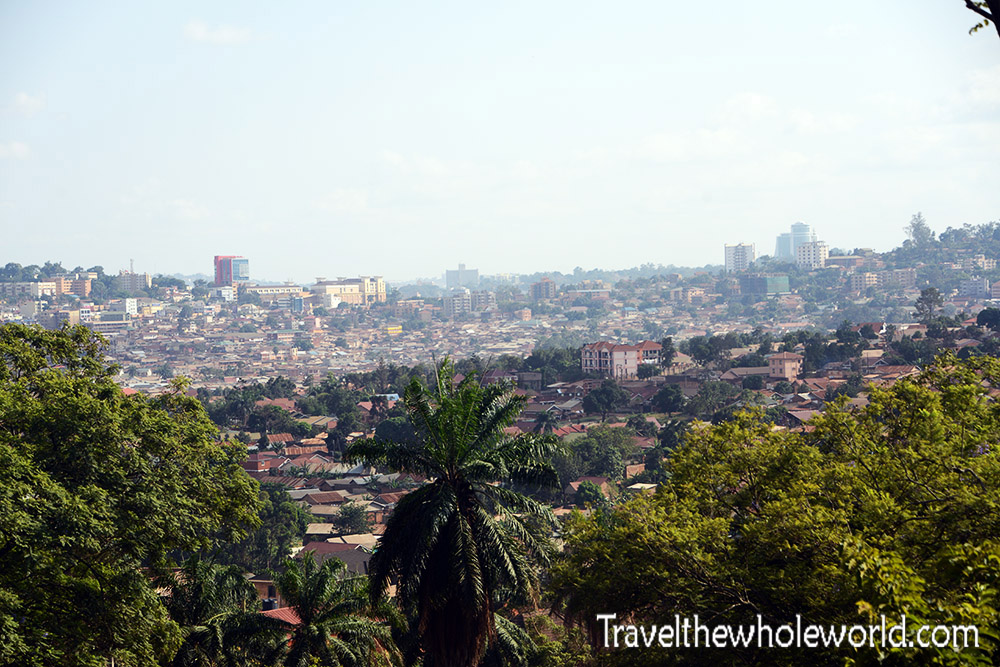 Kampala is Uganda’s capital and largest city. While Kampala is definitely behind some of East Africa’s best cities like Nairobi or Kigali, it’s a nice place that exceeded my expectations. My focus to Uganda was to climb Mt. Stanley in preparation for Mt. Everest, so I didn’t spend as much time in Kampala as I would have liked. Above is a view of Kampala that captures most of the city. 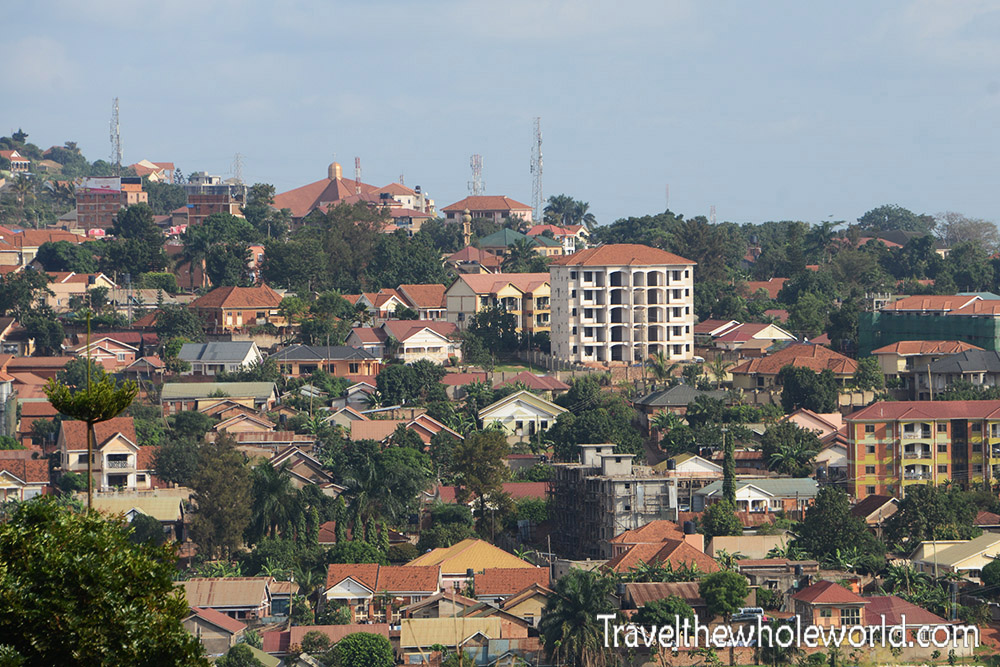 Like the capital of most developing countries, Kampala has a combination of nice areas as well as some poor ones. I forget the name of this suburb above, but was told it’s one of the nicest areas of the city. I actually didn’t see many expats or foreigners in the country, even at the hotel I stayed in. 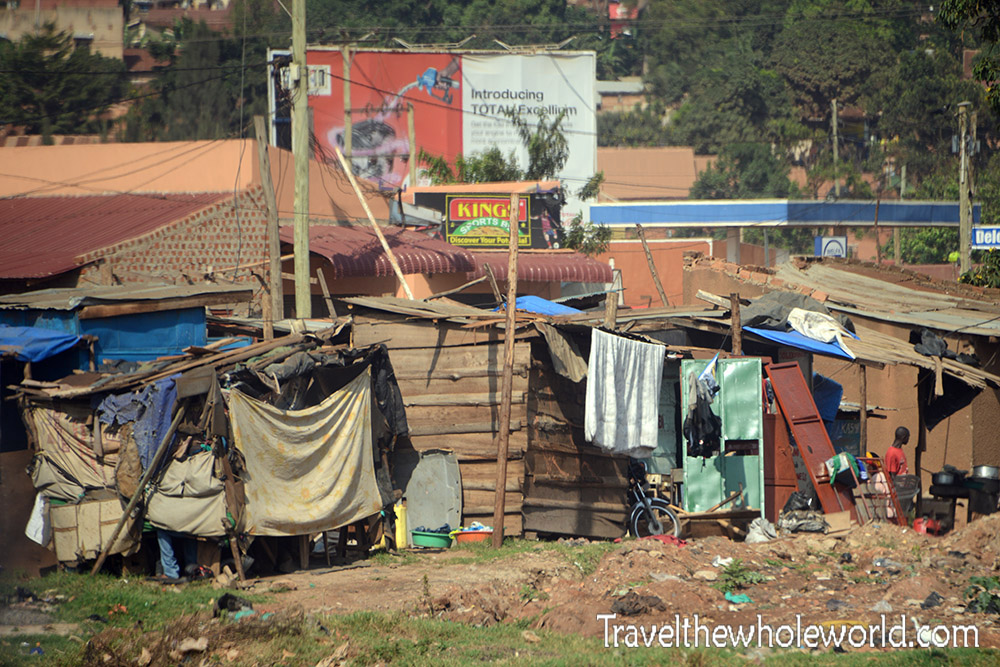 This lower class neighborhood might not be as appealing to visit, but you can see there’s a sports bar which at least suggests they still know how to have a good time! The photo shows an advertisement for one of their most popular beers in the country. I felt that Kampala was a pretty safe city and had no issues traveling alone both during the day and night. 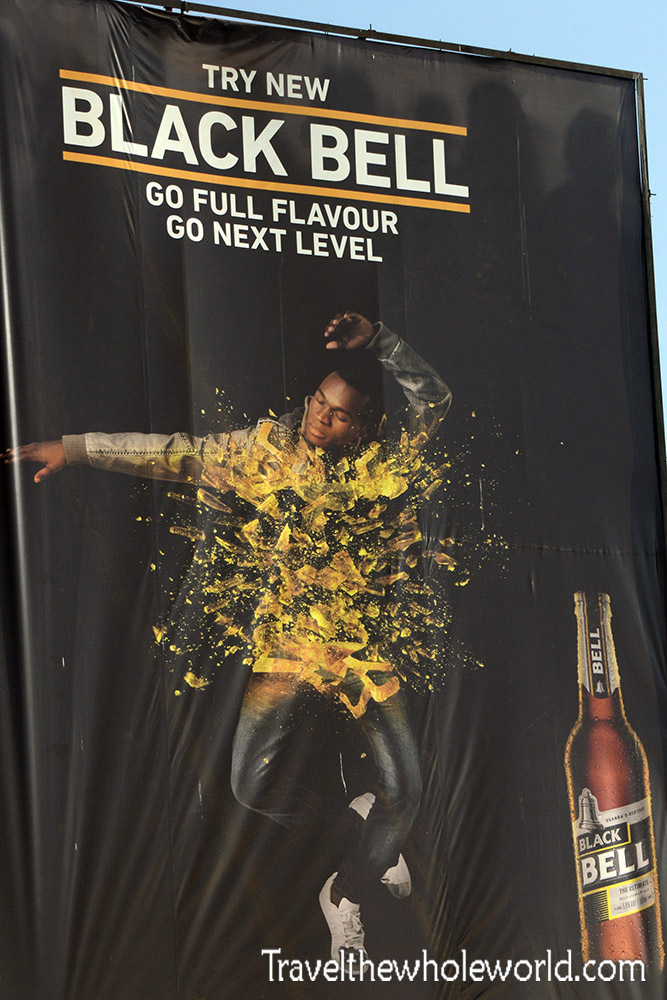 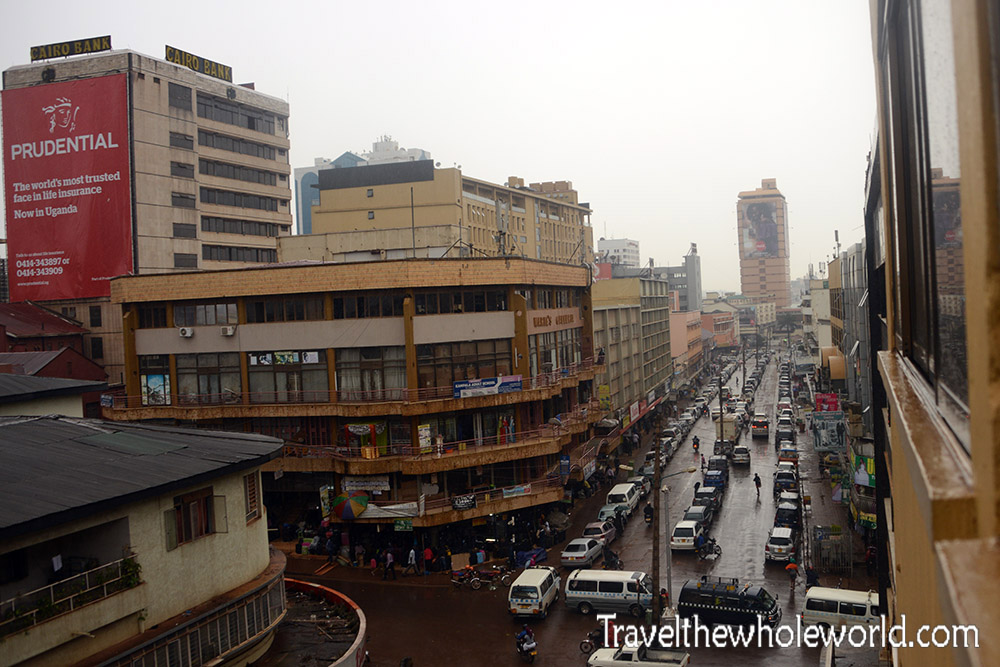 I stayed in downtown Kampala which is relatively cheap. There’s a range of hotels in the city from touristy hostels to five star accommodations costing hundreds of dollars a night. I had a decent place in the city center that had good wifi and a small restaurant; basically everything I needed! The only drama I had during my visit was one night when I was in my room and the entire building began shaking. There was no doubt that it was an earthquake, and for a brief moment I found myself worried. After it stopped I took a look outside and saw that no one seemed to care, so I suppose it wasn’t a big deal. It might have felt a bit more exaggerated being higher up in a building, but I later found out that the earthquake was a magnitude of 6. 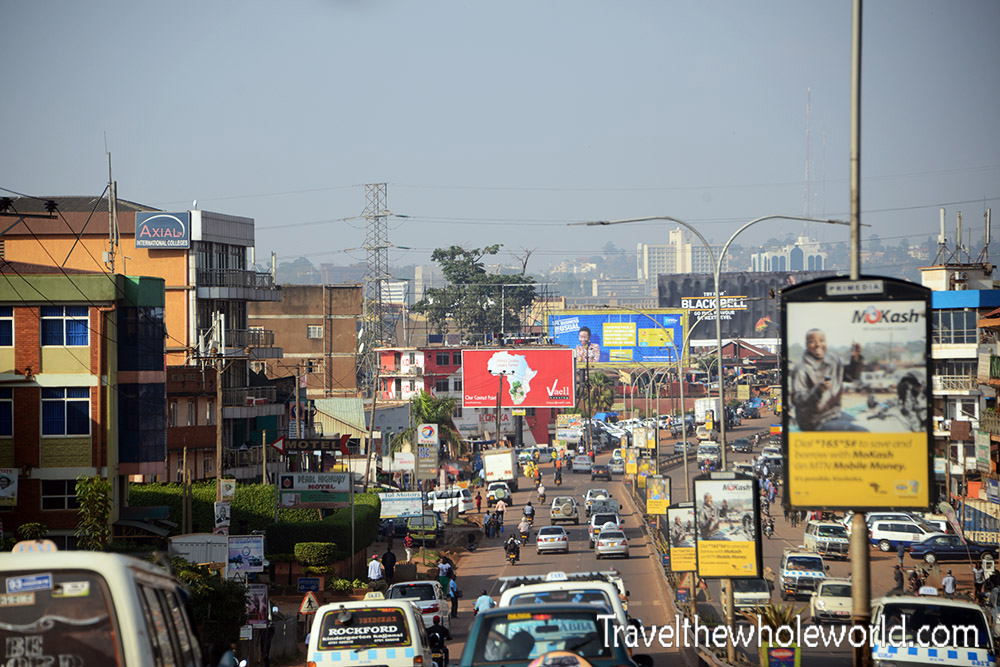 I did only two touristy things while in the city, and otherwise just walked the streets of Kampala. The photo above shows one of the main streets in the city which can actually have some horrible traffic. The photo below is one I took while walking and came across a city market that occurs every Sunday morning. The streets are closed off and all the typical market items like clothing, food, household goods etc are sold by vendors. 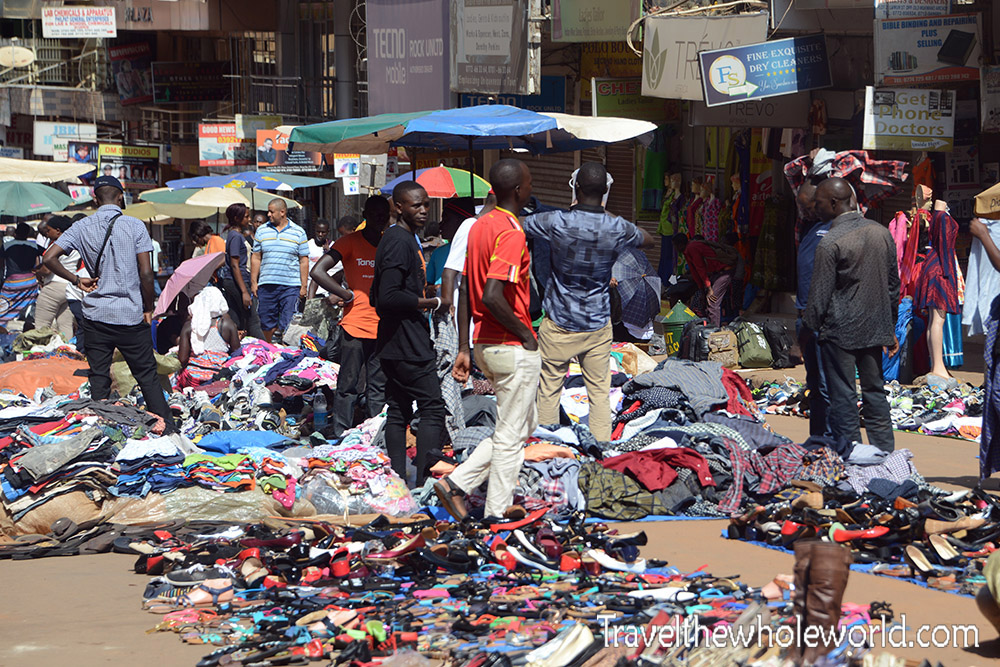 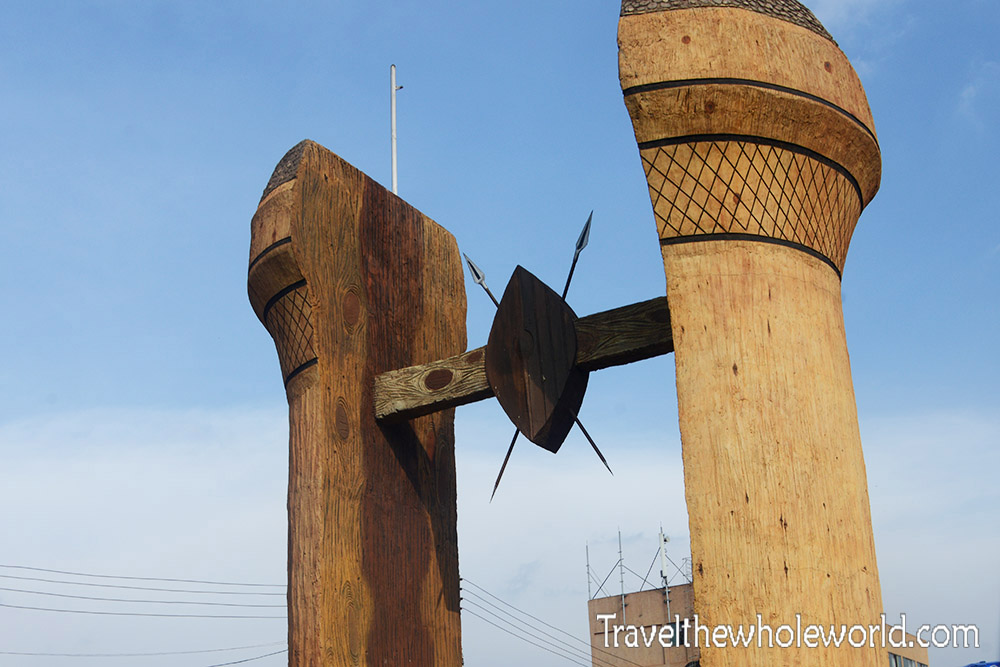 This monument above has more significance that I thought when I first passed by. I figured it was a monument of an African Shield to honor tribal people of the country, but as it turns out its dedicated to the king of the country. I tried to photograph it and get the traffic out of the way, but consequently removed the gate below the shield. This is known as the Nantawetwa Monument, and the king of Uganda is the only one allowed to enter the gate. The photo below is Uganda’s independence monument, which happened on 9th October 1962 after they left British rule. 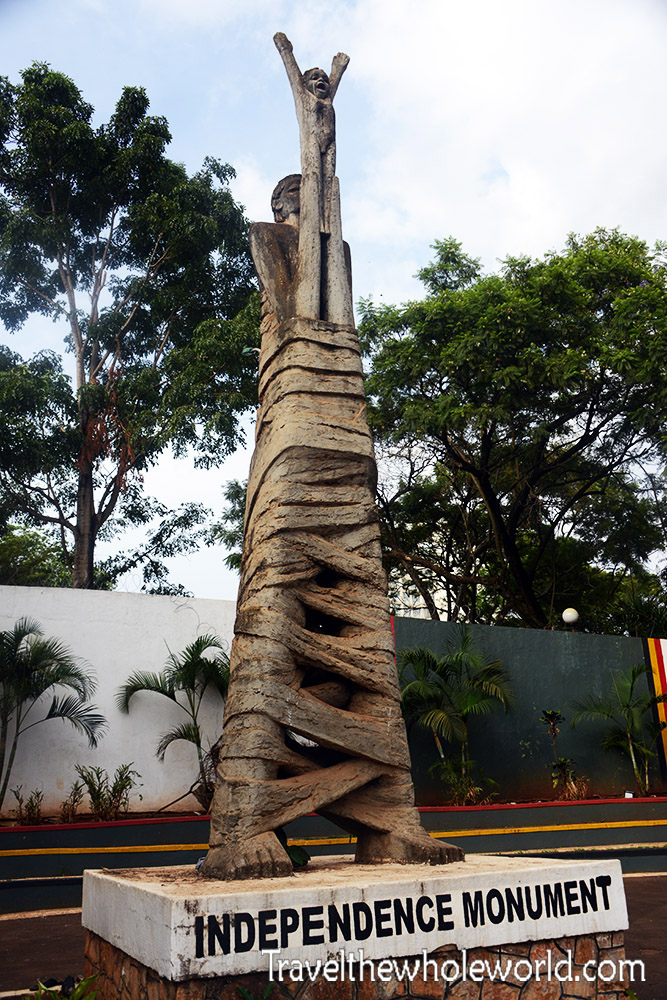 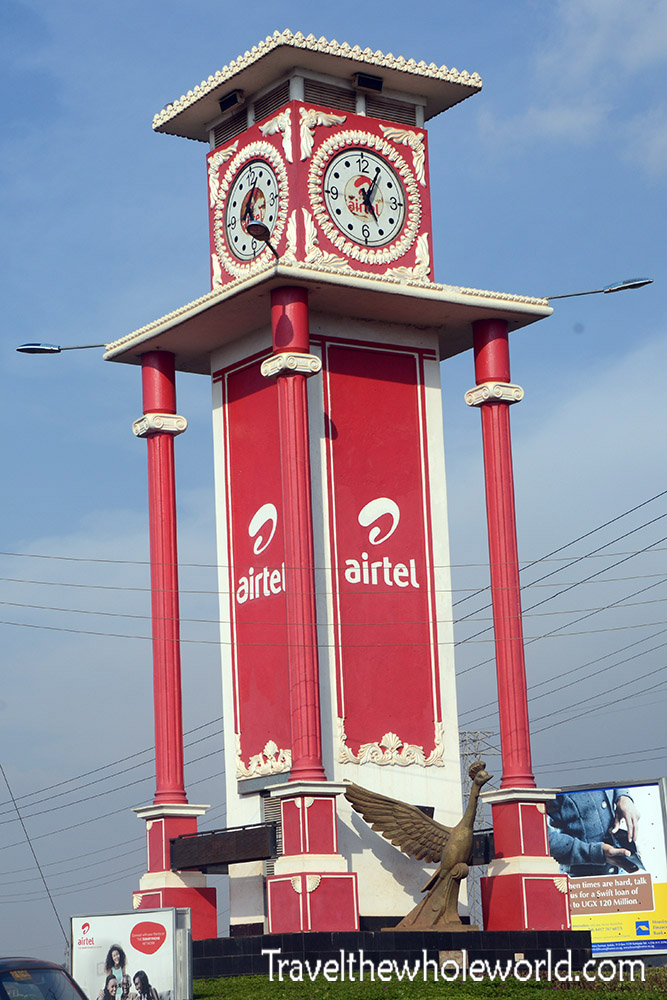 At first I thought this was the Queen’s clocktower that’s also in the city center of Kampala. That seems pretty obvious it’s not the same place, since this tower is much smaller and looks to be more of an advertisement for the phone carrier airtel! 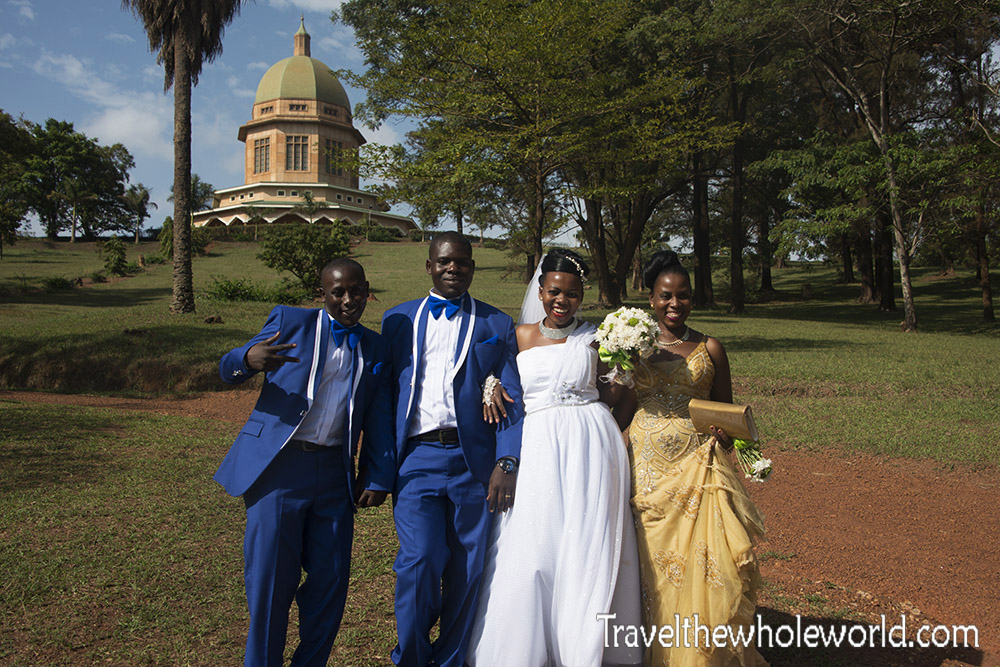 You’ve probably noticed by now that most of my pictures were random ones taken as I strolled about the capital. One of the two places I made an effort to visit was the Baha’i temple. This is a pretty unique places, especially in Africa. The Baha’i religion is a small one but is spread across the entire globe. They are known for their beliefs that essentially state that all major religions are true, and god has simply approached people in different forms to reflect their culture. There are only about half a dozen major temples in the world, and this one above is the only one in Africa. As you can see the people above were having their big day and were nice enough to let me take their photo. 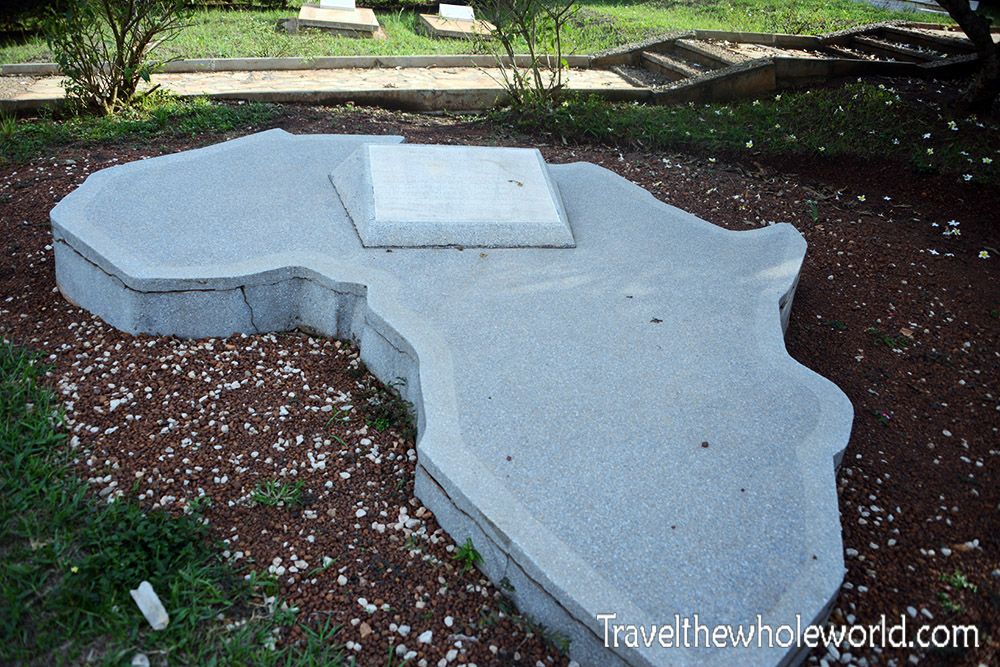 I was allowed to enter the Baha’i temple but could not take any photos. The temple resembled most religious churches and mosques, with a large area for seating and a podium for those who were giving service. There were stained glass windows and symbols of other religious inside, such as Islam, Christianity Buddhist etc. I was given an explanation of the temple grounds by a young girl who was about 20. Afterwards I was free to walk around outside again and took a photo of their burial grounds. This grave is from one of the first Baha’i members in Uganda who helped found the temple. 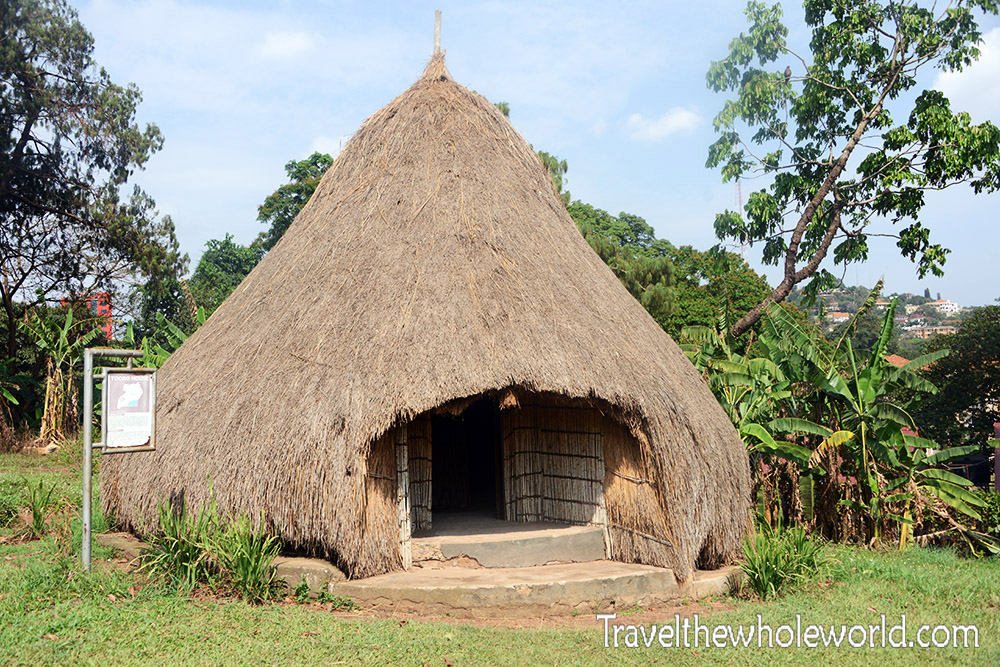 Aside from the Baha’i temple, the other place I made a point to visit was the national museum. The museum has both an indoor and outdoor section and is fairly large. It covers just about everything related to Uganda, from their history, tribes, artwork, and other topics such as geology and wildlife. The photo above shows a hut from their outdoor section, almost all of which you can enter. 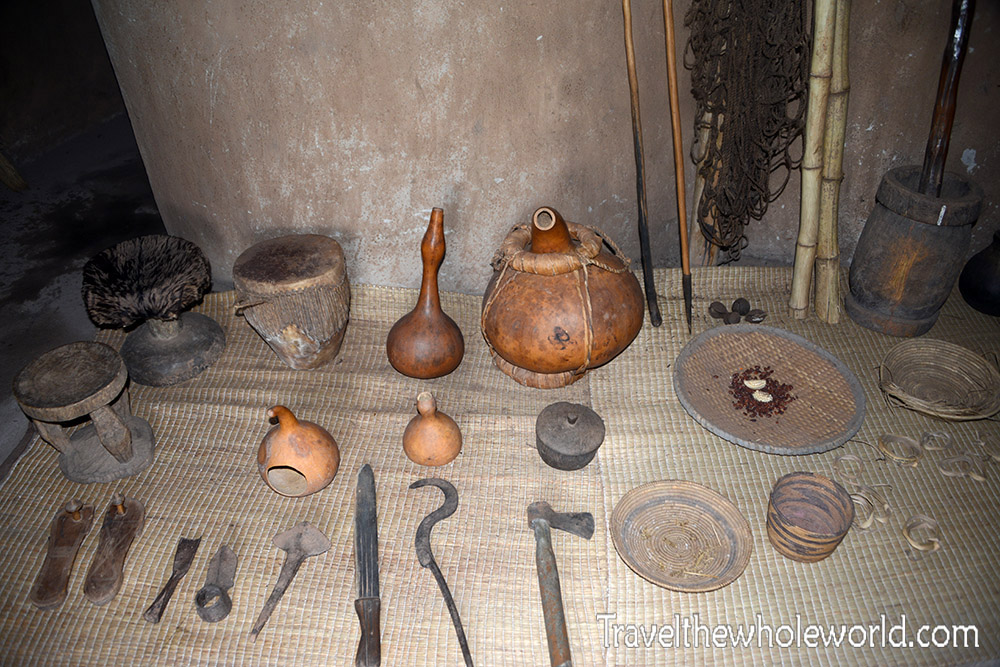 The huts on the museum grounds are filled with many traditional items, such as agricultural tools and cooking utensils. There are even staff inside who are happy to demonstrate how some of these are used. The little canoe like object below is actually used to create banana beer! 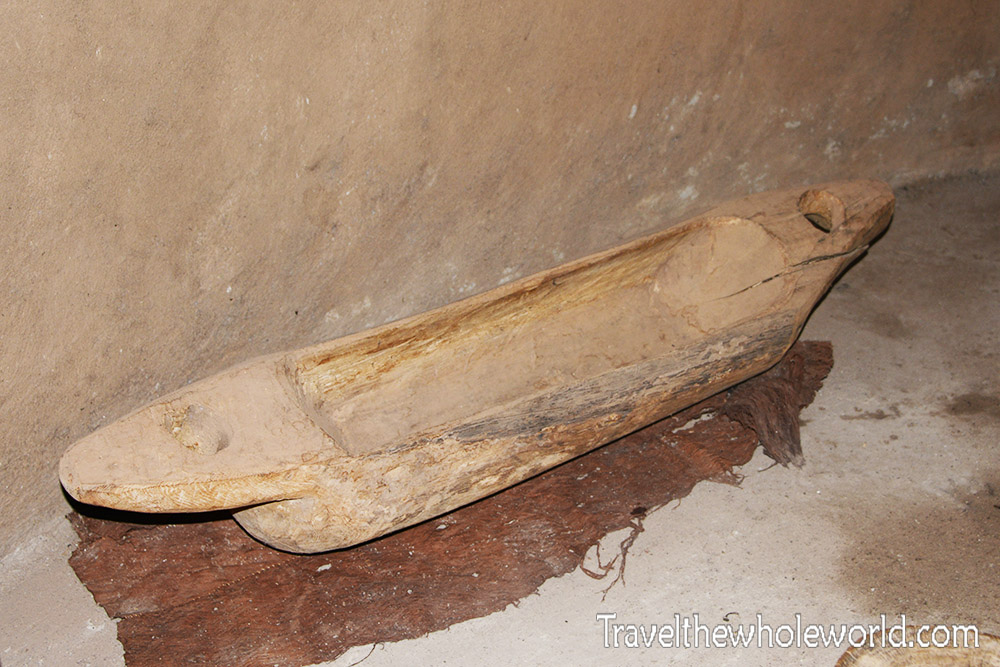 Perhaps one of the most interesting things on display to me were some of the personal belongings of Idi Amin. Idi Amin was one of the most controversial leaders of east Africa in recent memory. He initially started off as pro western but soon shifted to countries such as the Soviet Union, and Libya. He was most known for his human rights violations, where some say he may have killed as many as half a million people in his small country. The photo above shows one of his personal cars from his presidency. 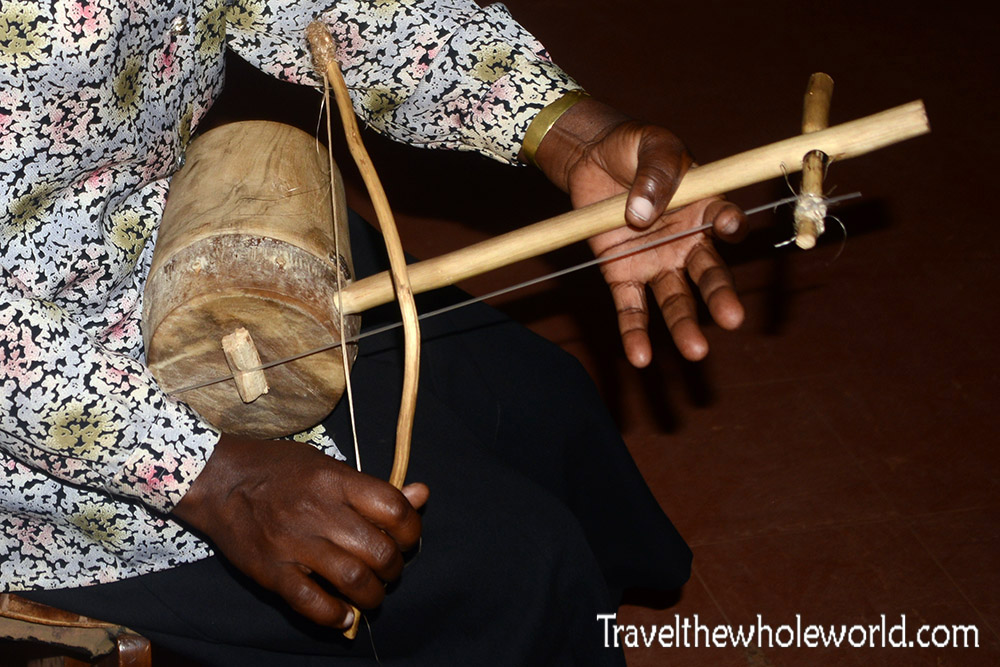 There was no banana beer sample tasting, but someone did show me some Ugandan music and let me have a try. I have no musical talent or knowledge, so it was a bit harder than I thought. Inside the museum, you can find more things than I have space on this page to show. One of my favorite items was this tribal mask below. 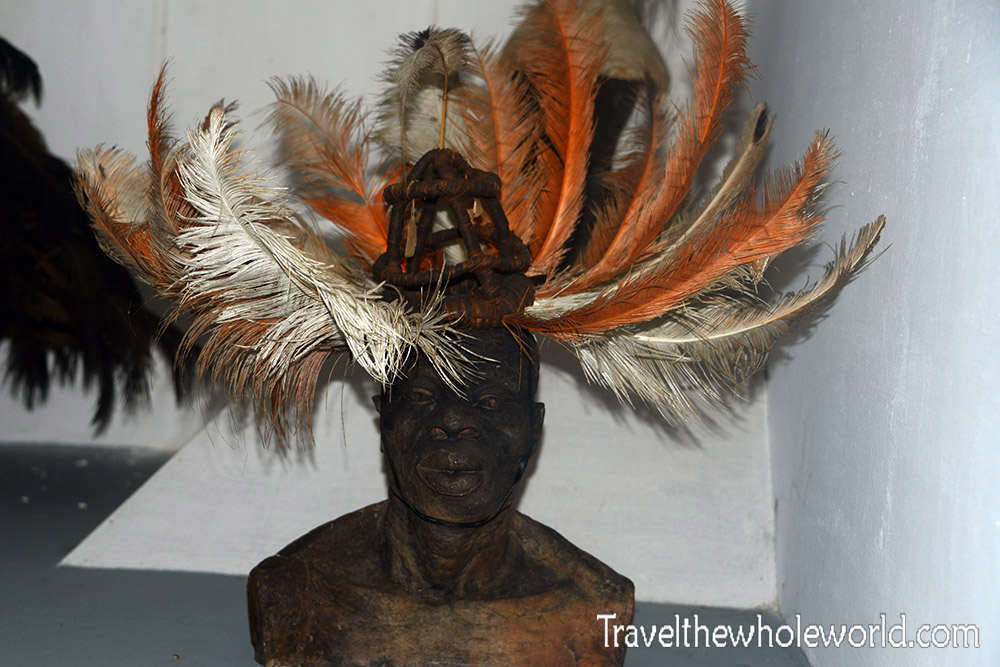 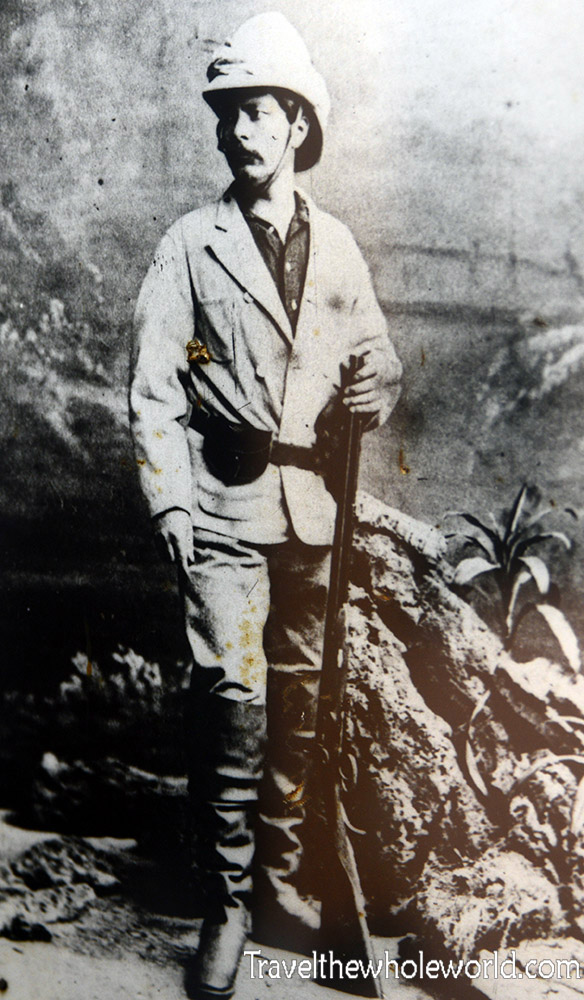 Since I was here in Uganda to climb Mt. Stanley, I took a special interest in reading about Henry Morton Stanley, whom the peak was named after. Stanley moved to the United States an early age, and found himself fighting in both the confederate and union side of the American Civil War. Once the war was over, he became a renowned journalist and an explorer in eastern Africa. He is also famous for finding the missing Dr. Livingstone who was in now Tanzania. 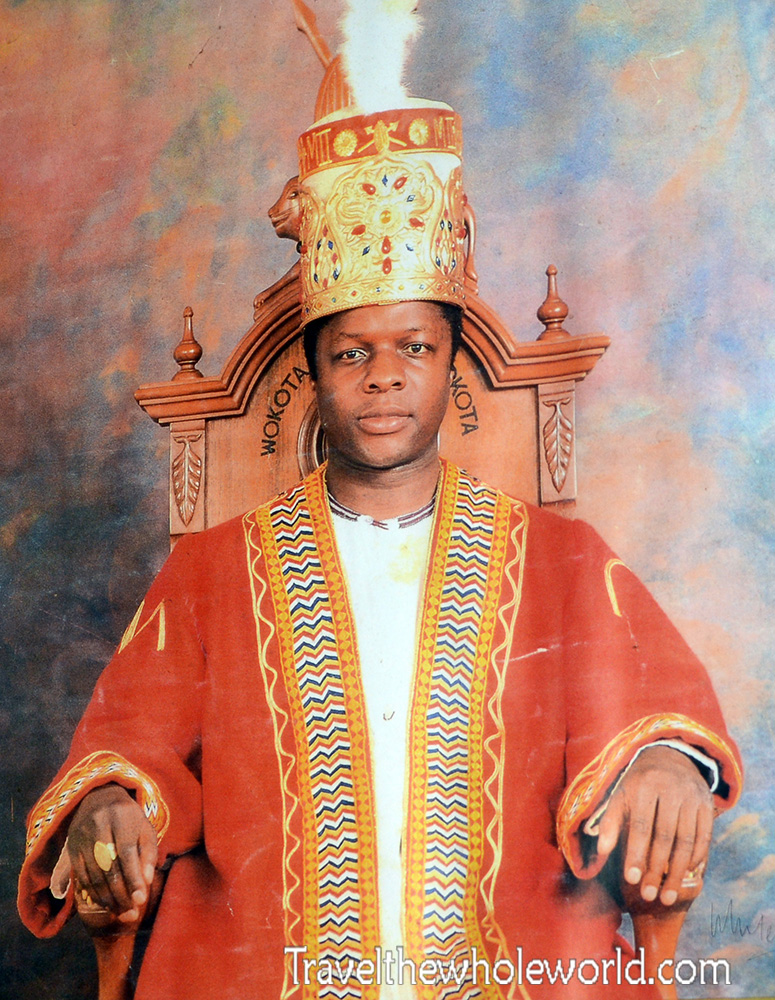 And lastly here is a portrait of the current king, officially known as Muwenda Mutebi II of Buganda.