Traveling in the Fann Mountains 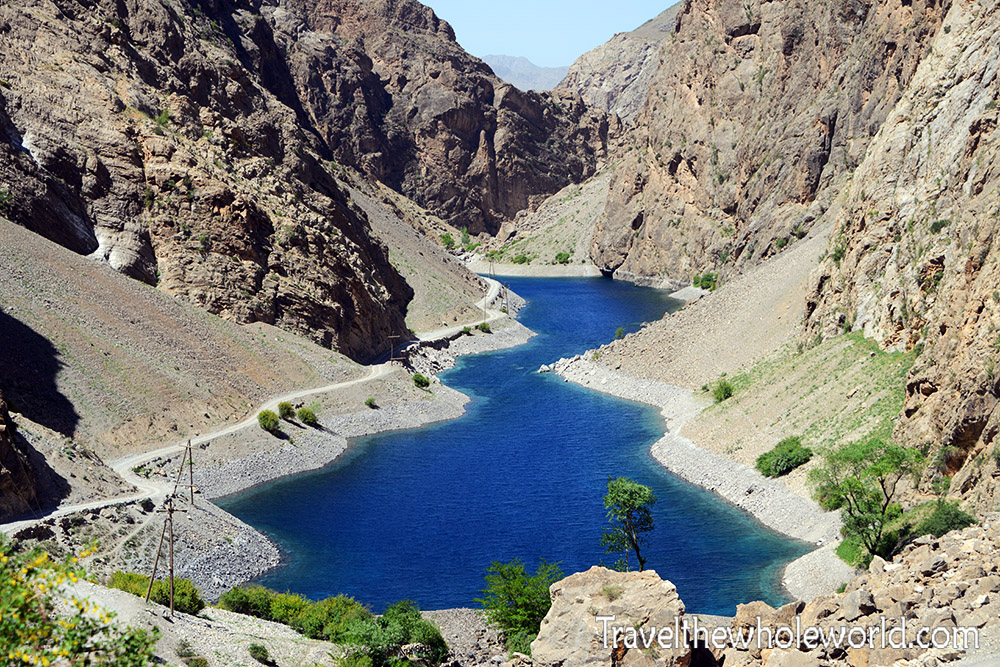 Tajikistan’s natural border with Uzbekistan is created by the Fann mountains. These mountains rise to altitudes as high as 18,000 feet (5,500 meters), and have some of the country’s most beautiful scenery and best hiking. Although Tajkikistan’s Pamir mountains in the east reach altitudes of 25,000 feet (7,500 meters), the main benefit to the Fann mountains are their easy access and stability. I was actually planning to visit the Pamirs myself, but violent conflicts between the locals and the Tajik government ended up closing that entire region to foreigners. So instead I found myself in the Fann mountains, and decided to do one of the country’s most popular hikes, in an area known as the Seven Lakes. Photographed above is the first lake at about 5,000 feet (1,500 meters, with a deep blue that none of the others came close to. 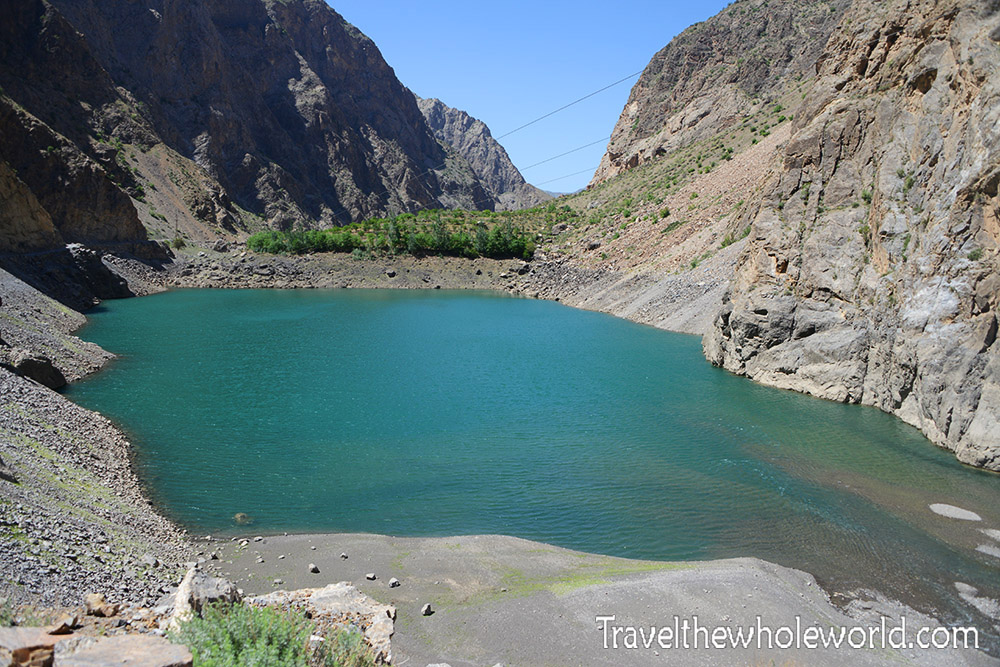 The second lake I’d rate a C, but shame on the Shing river for creating this, as well as the people who put the electrical lines alongside! Sadly most of the lakes were complimented by a dusty road and power lines, but the higher I went the less of a problem this was. Another factor with the lower lakes is I was told they were unnatural low at the time of my visit. You can see the waterline in the first two pictures, so I’m sure both lakes are more attractive when they’re full. 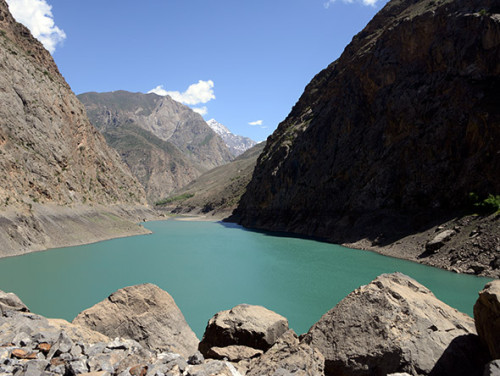 The third lake was definitely one of my favorites while the fourth and the fifth were my least. The village I stayed at was right by the forth lake around 6,000 feet (1,800 meters). Honestly I’d say the first five lakes weren’t really much to write about! From here I had a good base from which I did several solo hikes further up the mountains where the power lines were gone and the scenery was finally worth visiting. 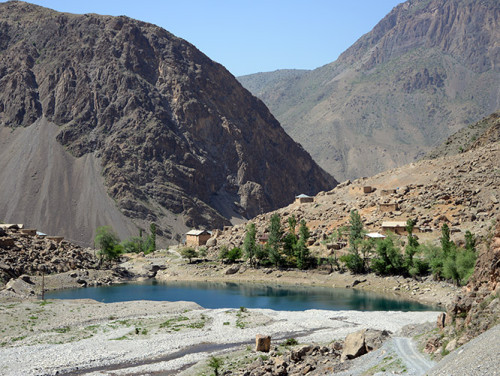 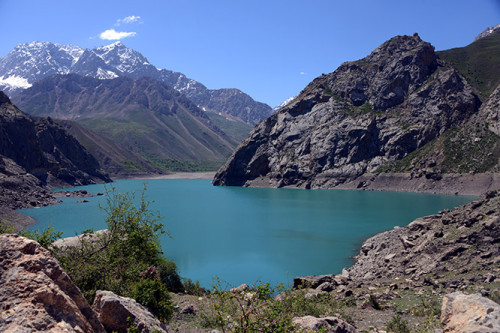 These two shots above and below show the final two lakes. The sixth lake was by far the most beautiful, with the seventh being next in line. Three of the lakes had people picnicking along the shoreline, but otherwise I would have this entire place to myself. Along the shores of the seventh was a woman and her two young girls skipping stones through the water. Of course the seventh lake is the highest, but it didn’t necessarily have the best views. I’d give that to lake number six. The final lake is at 7,900 feet (2,400 meters) and is the only lake to not have any fish. 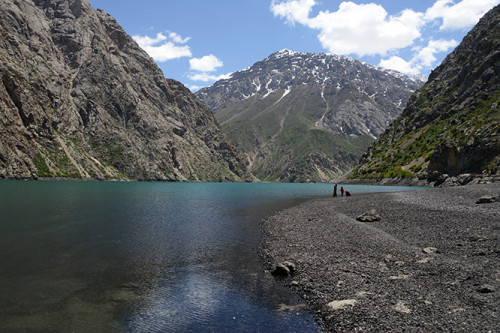 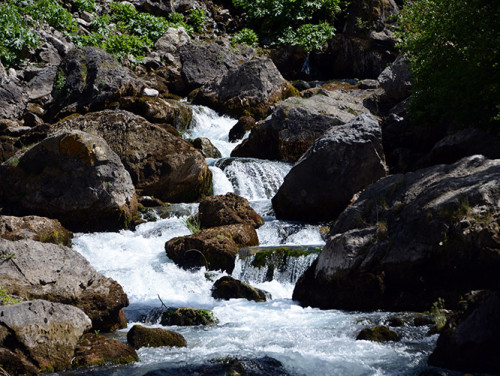 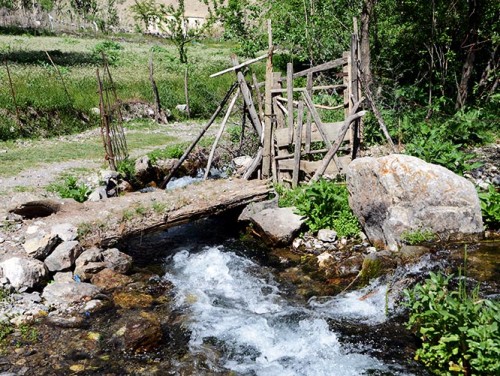 With a permanent source of water from the Shing river, several villages with populations of a few hundred people exist along the banks. Most of the villages have electricity and have redirected small streams from the river to their homes like on the right hand photo. 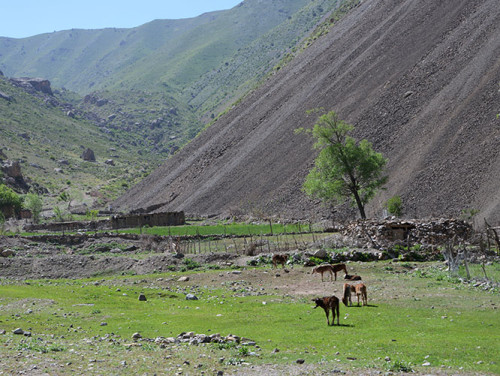 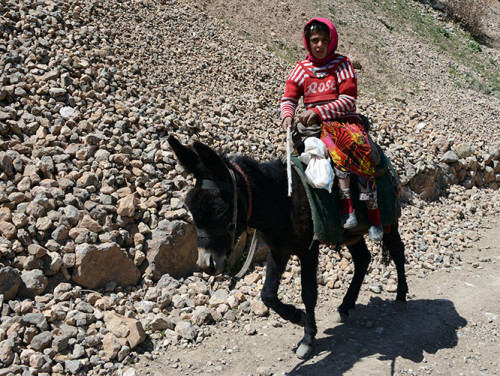 During this part of my trip, my checked in baggage had been lost so I ended up hiking for a few days here wearing the same clothes and without things like sunblock and a hat. In order to survive, I made a makeshift hat out of a pillowcase from my room. It was a colorful one with roses and flowers and I’m sure I looked pretty damn silly to all the locals. I regret not taking any photos of the men in the village. Most of them were on horseback and wore traditional clothing. Almost all of them pointed and laughed at my flowery hat. Above is a small house and farm in the village with a young girl riding a donkey. 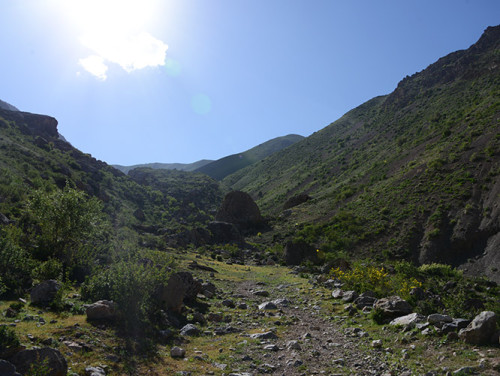 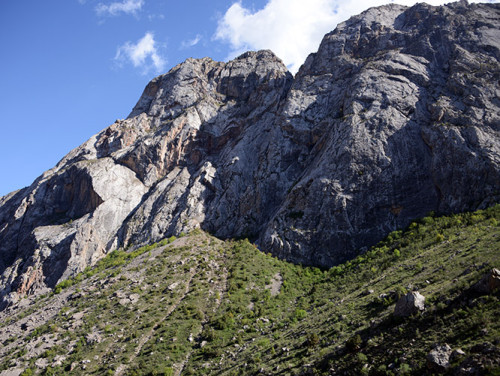 In addition to the Seven Lakes hike, on a different day I hiked up to a mountain pass that was just shy of 10,000 feet (3,000 meters). This hike was much steeper and demanding than the Seven Lakes hike which was just along the dirt road. The hike began at the village I was staying at so I had more than 3,000 feet (1,000 meters) of elevation gain. On the left was the very beginning of the hike as I started to ascend up the mountain valley. On the right is some of the surrounding mountains. 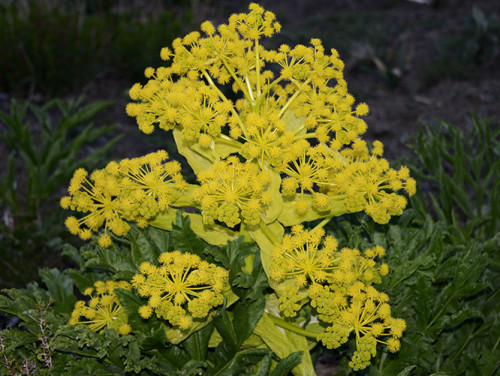 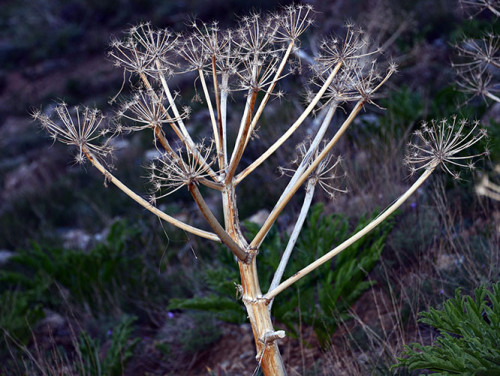 Above are some species of plants that I saw in the Fan mountains that I have never seen before. The plant on the right almost looks like a dead version of the bright yellow plant on the left, but I saw lots of both so I’m sure they are two different kinds. Both of these were about the same size though and never grew more than a few feet, or less than one meter. Below are some more common sights in the forests in mountains around the world; a thorny sticker bush and some brightly colored lichen and moss. I’ve seen lichen and moss almost the same exact colors as in the Fan mountains in places like Colorado. 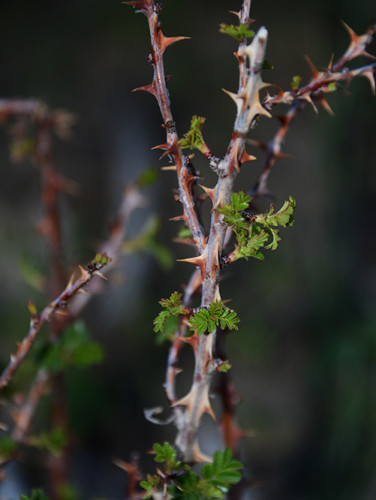 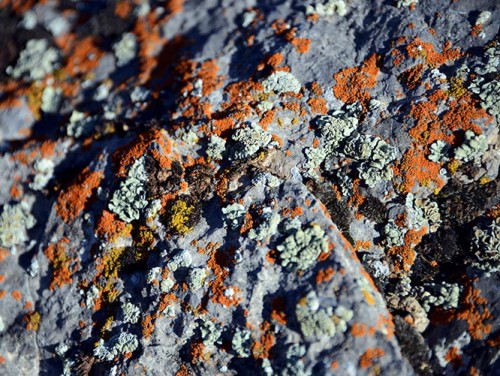 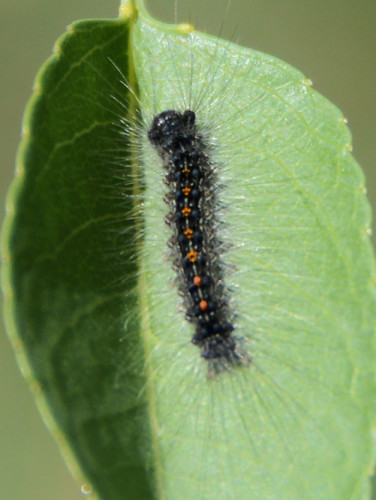 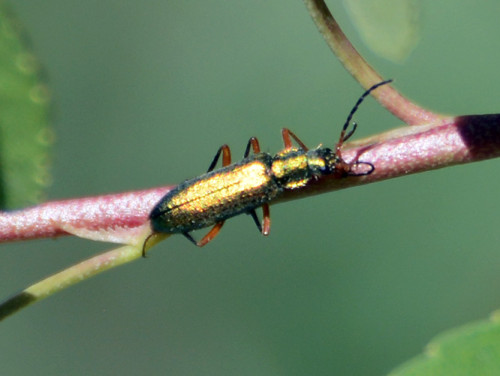 I did see some large birds here and even some small colorful ones, but all refused to be photographed. The only thing I left with was photos of these two bugs here. Somehow a caterpillar like the one here in the photo found its way inside my bag and I didn’t discover it until I got back to my room late that night. 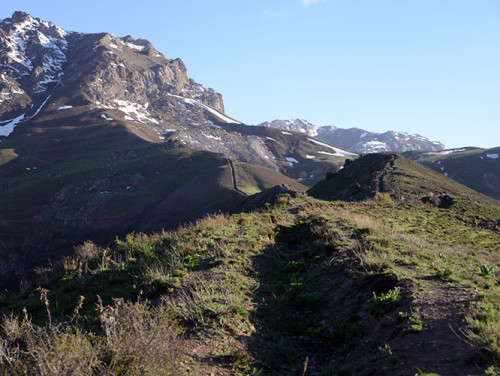 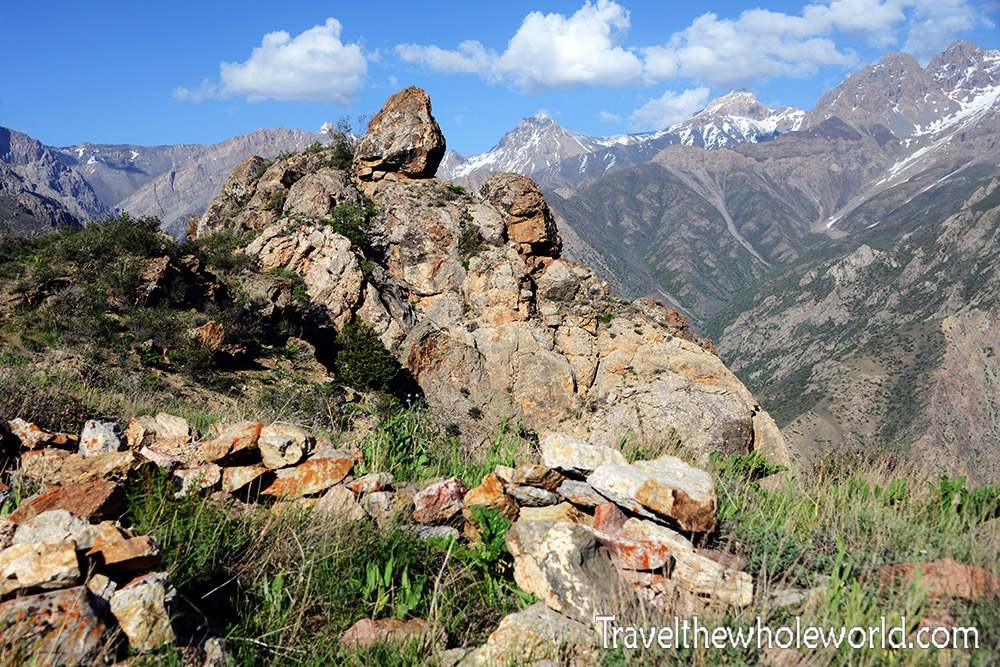 The left hand photo is actually the mountain pass itself, while the remaining three photos were taken in the area. With perfect weather and beautiful scenery, I enjoyed this hike even better than the Seven Lakes hike. At the pass the weather was still warm, but not too far away I could still see remnants of snow from the last winter. 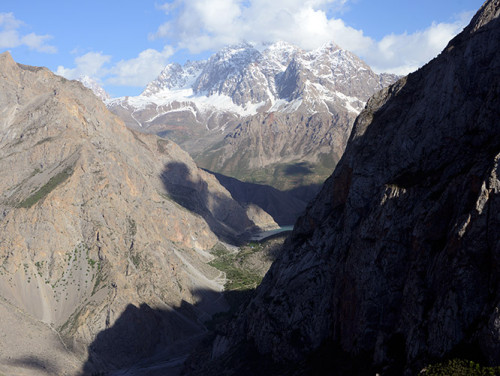 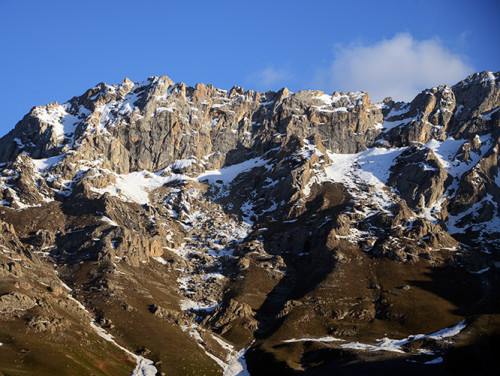