Places to Visit in Socotra

Despite being one of the most unique places I’ve ever been, the islands of Socotra seem largely unknown to the rest of the world. Socotra’s closest island to the mainland is just 50 miles northeast of Somalia, and 100 miles south of Yemen to whom they belong to. Like the Galapagos islands, Socotra stands out because over a third of its exotic plants and animals live no where else in the world. Even the native language of Socotri, that has no written form, is only spoken here! 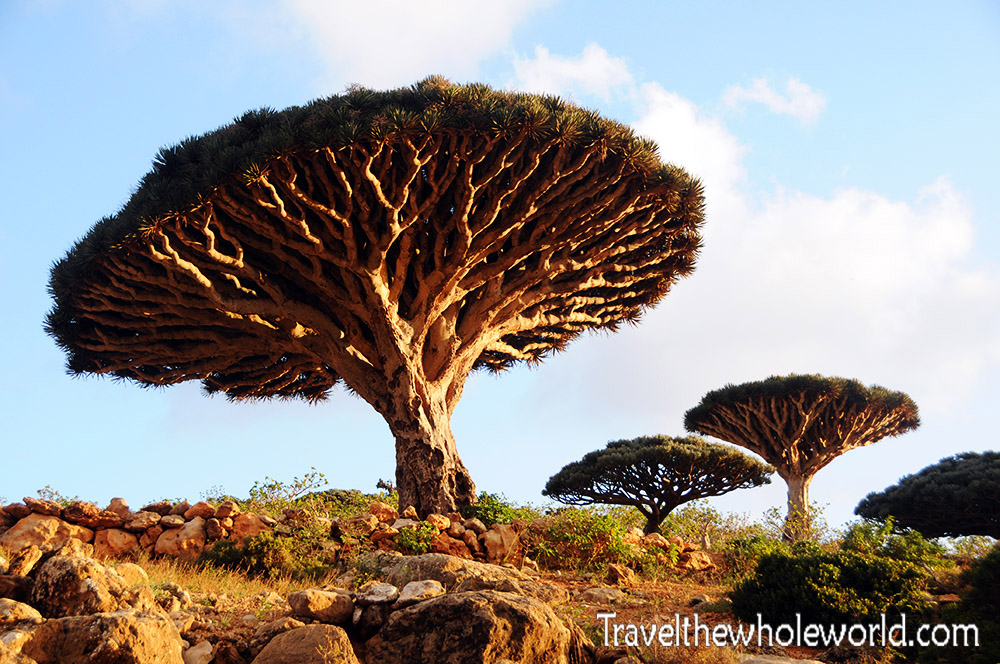 A virtual Tour of Socotra

From the mainland of Yemen I flew to Socotra’s tiny airport. Once I had grabbed my bags, I found my driver who was waiting for me and he greeted me be saying, “Hello, and welcome to the island!”. I was excited to see the island’s beautiful dragon trees but my very first views were the town of Hadiboh. 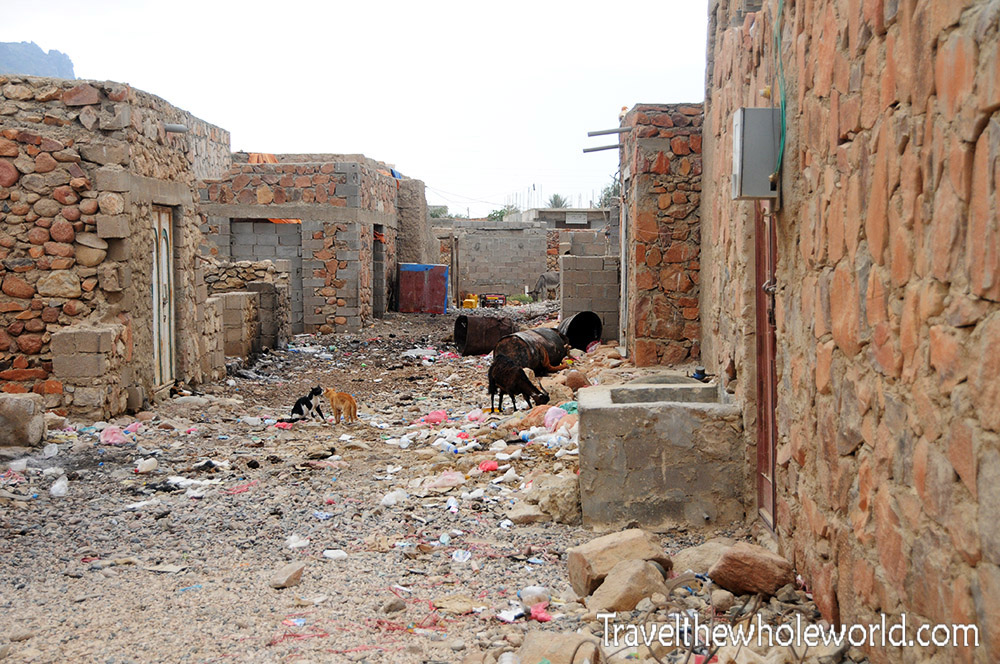 Unfortunately I can’t say there was really much worthwhile in Socotra’s towns. The smaller villages were worth visiting and the coastal areas were beautiful, but to be honest, the towns were some of the trashiest places I’ve ever visited. Once during this trip my driver stopped in front of some beautiful scenery. While I pulled my camera out a man we had given a ride thought he’d show his gratitude by throwing all our trash out the window. 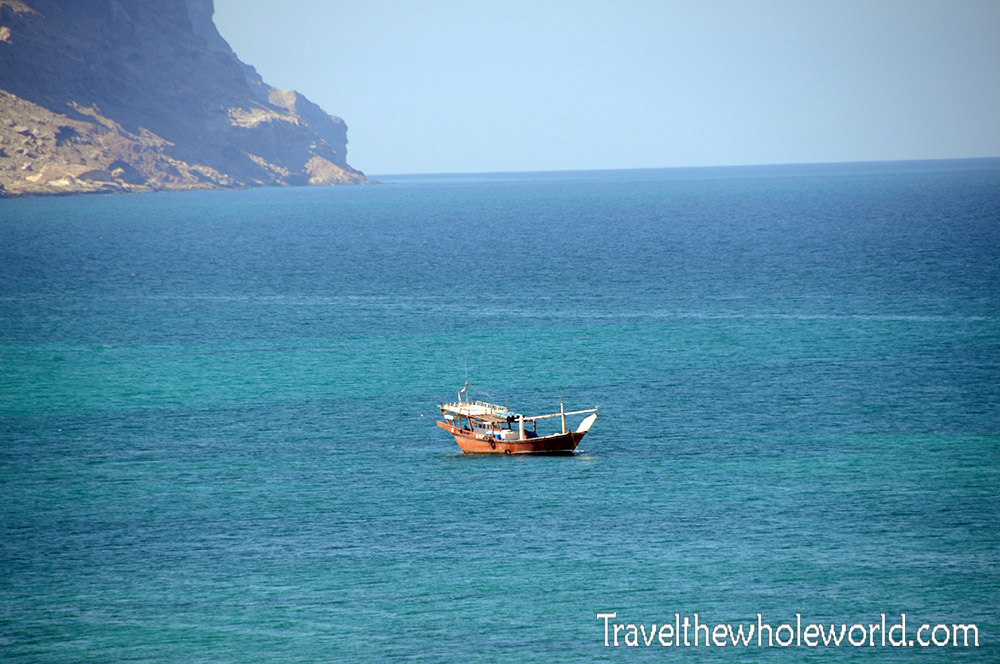 War Tanks all over the Socotra Island
During my road trip around the island I was surprised to find the coasts littered with abandoned tanks. At the time I had no idea why they were here or if they were ever used. My understanding is that they are Soviet T-34 tanks, but I couldn’t find any history about recent conflicts that took place on the island. It seems like instead of using these as actual battle tanks they simply dug them along the coast and used them as stationary turrets. I passed by these two tanks in different parts of the island. One time I tried to approach one of the tanks but a local man prevented me from doing. Not exactly sure what was wrong with seeing an abandoned tank but being that I’m the guest here I didn’t argue. 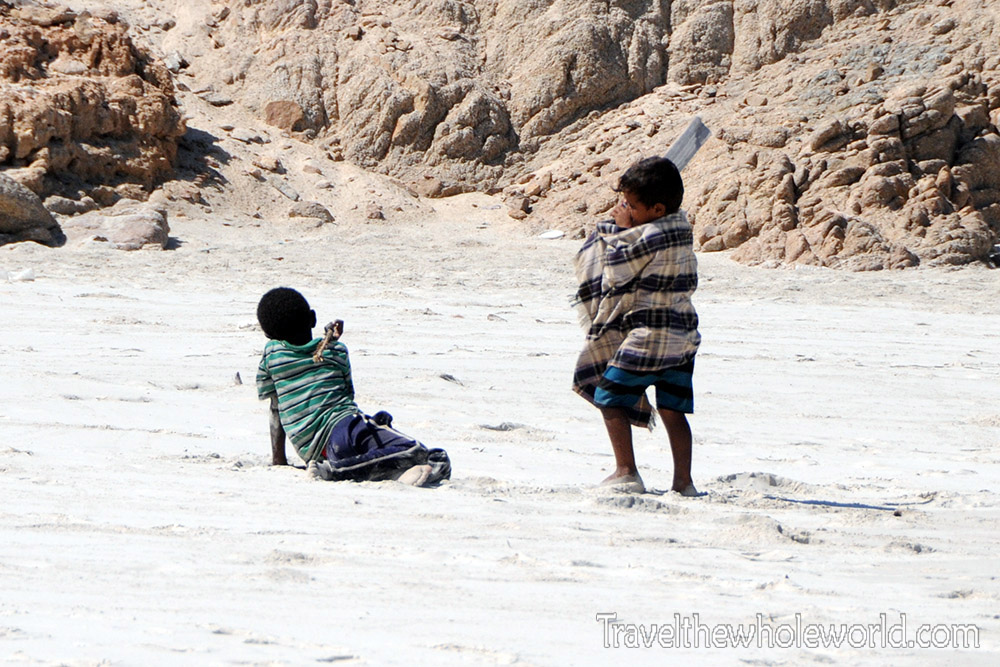 The more I explored the island the more obvious it was that Socotra is much more liberal than mainland Yemen. As a matter of fact, Socotra was not considered part of Yemen until 1967, and though Arabic is the official language, Socotra has its own native language that is only spoken here. Above are some kids I saw playing on the beach, and below is a Socotra girl wearing colorful traditional native clothing that I saw throughout the island. 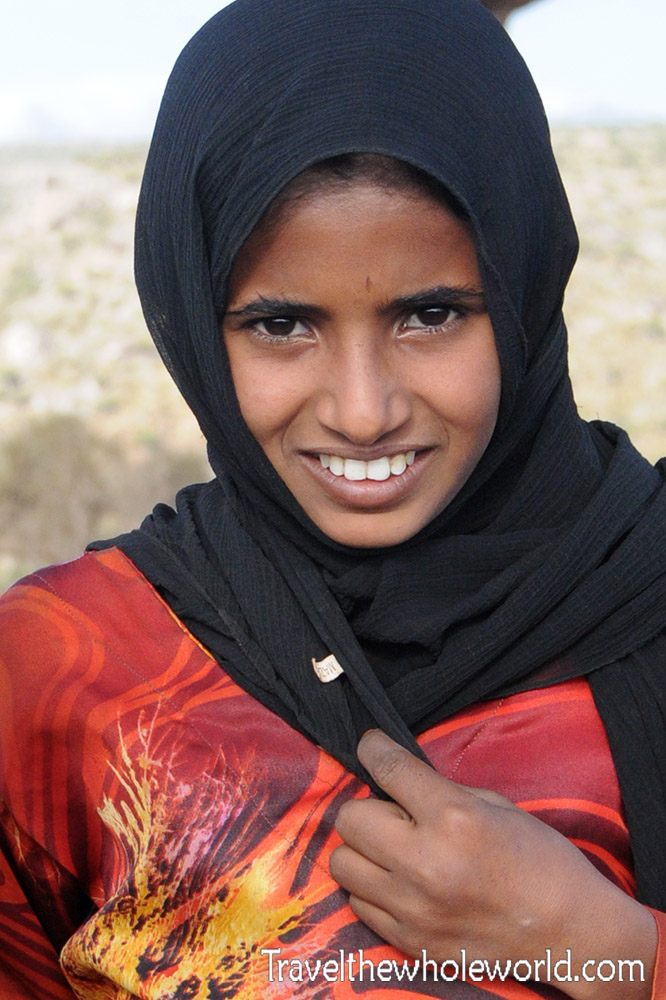 Now for the dragon trees! This is what I was most excited to see. Exotic trees that live no where else in the planet except for Socotra. Dragon trees get their names from their dark red sap that resembles blood. The dragon tree sap is sold as medicine in the local markets and even by kids on the street. While I don’t have a photo of the red sap, you’ll have to take my word for it that it does indeed look exactly like blood! The trees seemed to like the slightly elevated parts of the island, but I did see an occasional dragon tree here and there closer to the coast. Normally I only saw a few dragon trees together, but on my last day on the island I found an oasis of them. Scroll above through some photos to see various shots of dragon trees.


While the dragon trees will always be the most famous flora in Socotra, there are plenty of other unique plants and animals that only live here. In the collage of photos above I have several unique plants of Socotra including a desert rose photographed, giant cucumber trees over 25 feet in height, a fallen dragon tree, and a few others I wasn’t very confident about. I hear in the right time of year you can see dozens of desert roses in full bloom. The cucumber tree gets its name because of its large pulpy body. Apparently during droughts they can be cut down and enough water extracted to save thirsty villagers.
Also in the slide above is an open salt depression, and a small oasis with crystal clear water. The majority of Socotra is dry and empty, but the higher up you go the more likely you are to find terrain covered with dragon trees. The lower you go the more likely you are to find desert like conditions. The oasis I saw seemed to be the one exception to the island. Even before I could see the water, I could tell that the soil here was dark and richer than the rest of the island. Somehow there was a freshwater stream which supplied a few small pools of water, and even had locals swimming.


The oasis was densely packed with red dragonflies. I usually don’t count that as wildlife, but the animals were a bit evasive. I think to properly see them you’d have to dedicate a lot of time to go in the remote mountains, and possibly even explore at night. Something I saw often were Egyptian vultures. I’m not usually a fan of vultures but these were pretty amazing, especially since you can get so close. I also spotted a large heron, and plenty of ugly insects including a whip scorpion at a local museum. While the whip scorpion isn’t a true scorpion, it was nearly the size of my face and seemed to be about as ugly as you can get. Socotra has lots of them on the island, and in fact there are five endemic scorpion species here. Some of the other things that can only be found here are endemic reptiles which even includes a chameleon. The only native mammals are a single species of bat. As far as plants go, 307 out of the 825 species in Socotra are found no where else in the world, and about the same ratio goes for wildlife; over 35% of wildlife here is endemic. Compare that to the Galapagos island, which is up in the 40’s you can see how unique Socotra is!

After I explored the mainland of the island, I spent a full day at the beach. The waters here are definitely some of the best I’ve seen on earth, and it’s a shame there is almost no tourist infrastructure here. I understand Yemen itself is not seen as a tourist destination, but Socotra is an island isolated from the mainland’s problems and anyone can visit this place without any worries.

The beaches here are so amazing that even the locals can’t resist and jump in. You will see a few people here swimming, but for the most part you’ll have the beach to yourself. It’s one of the few places in the world where you can have a pristine beach and be completely out of sight from other people.

Before I entered the water, I took a picture of these two guys along the beach. As mentioned earlier I always see herons around the world, and they were all along Socotra’s coasts. I imagine the same with this crab dominating the coasts as well. The crab was actually a giant, and made some impressive tunnels underground. Some of these were deep enough that you might suddenly fall eight inches into the collapsing sand and risk face planting! Luckily no one would be around to laugh!

There’s almost an endless amount of interesting flora and fauna on the island, but taking a shore dive continues the adventure. The blue spiky ball was one of the strangest types of coral I’ve ever seen.

Very sad at lighting with some of these photos! I took these only about 40 feet under water but the sky had also become overcast; not a good combination while diving. I just might have to invest in a strobe for my diving camera to avoid any disappointment in the future. Anyway though I did the best I could.