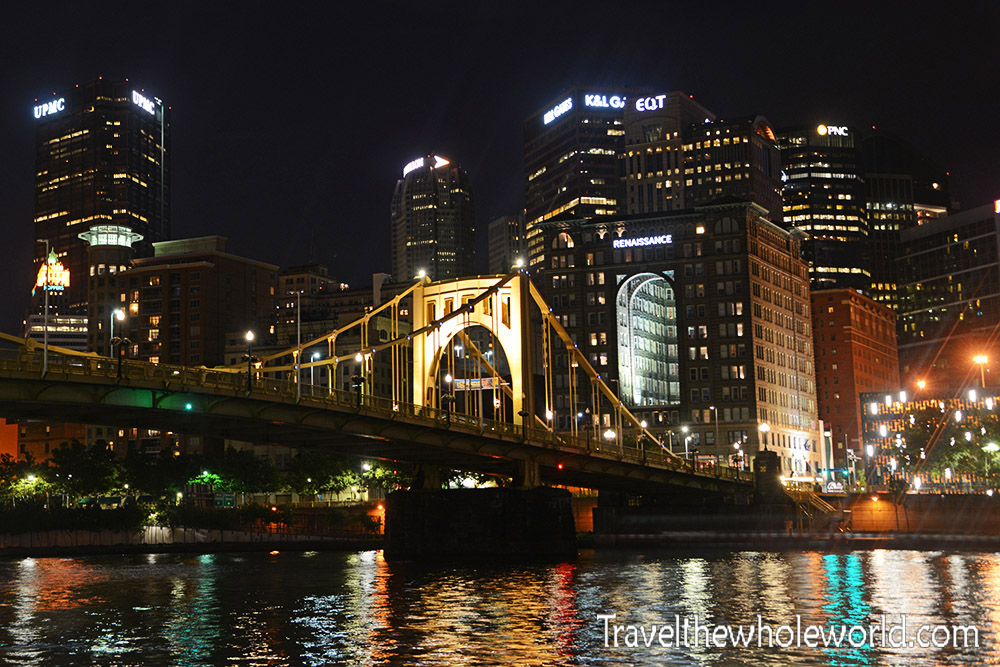 Pittsburgh was one of my last remaining major cities to visit in the northeastern part of America. At its peak, Pittsburgh was once one of the largest cities in the United States, but despite it only being four hours from my house, I had never been until late in my domestic travels. I had no idea until I arrive that there is where Batman was filmed, so it’s okay to think of Pittsburgh as Gotham City! Pittsburgh has some of the best city architecture in the country, and you’ll find this out the second you enter the city on one of its many beautiful bridges. 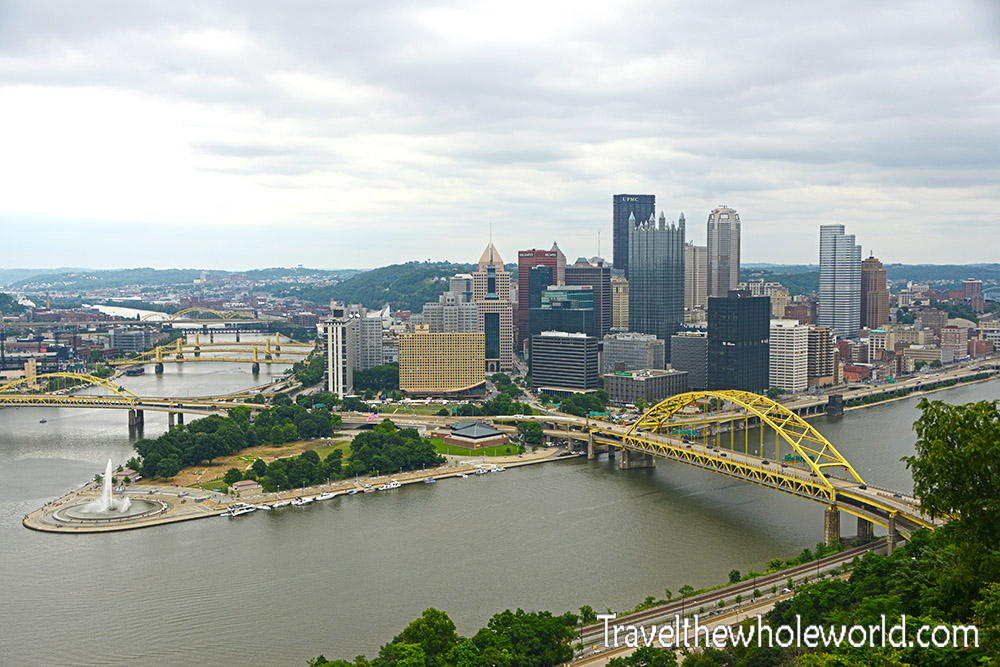 Pittsburgh is known for its skyscrapers, city bridges, and beautiful views. One of the most scenic parts of the city is where Pittsburgh’s three rivers converge. The river in the right side of the photo is the Monongahela; at the top of the photo is the Allegheny river, and these two combine to form the Ohio river. 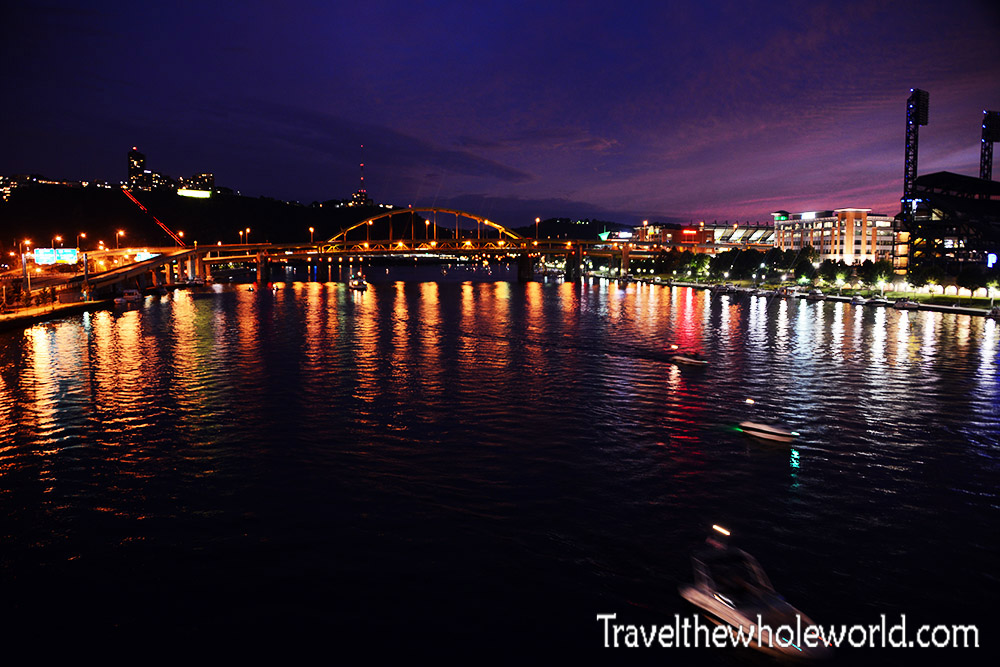 Pittsburgh has more nicknames than any other American city that I know of. One of the nicknames is City of Bridges; a fair nickname considering there are an incredible 446 bridges here! Some of these bridges might be small, while others are major ones that were architectural achievements when they were first built. While in Pittsburgh my friends as I ended up crossing dozens of them as we walking around the city. I took this photo of a bridge in the distance while crossing another one of similar size. A few minutes later we were passed by these night bikers. 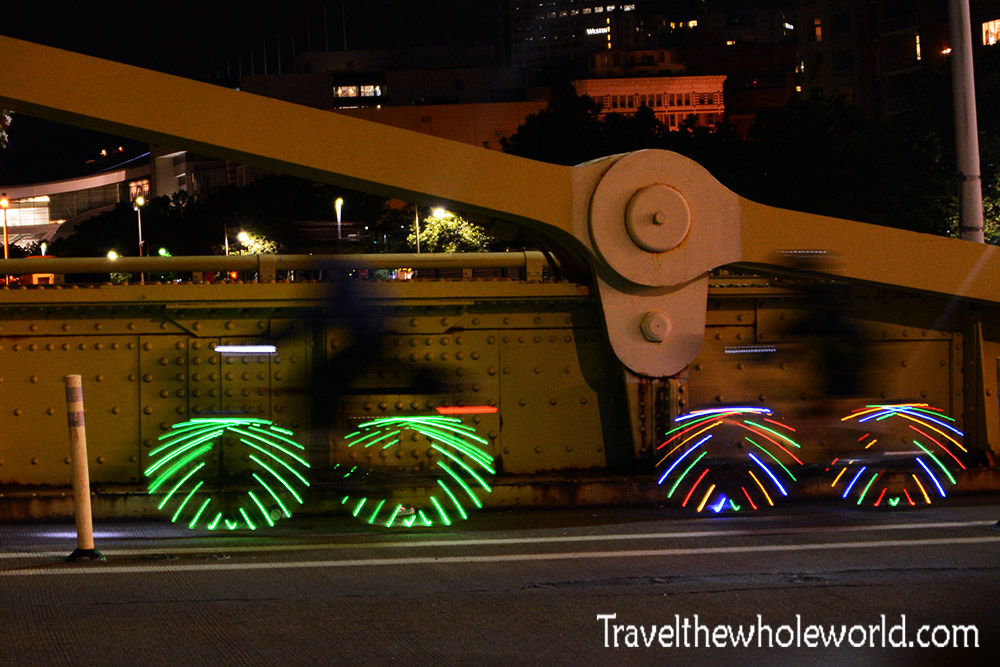 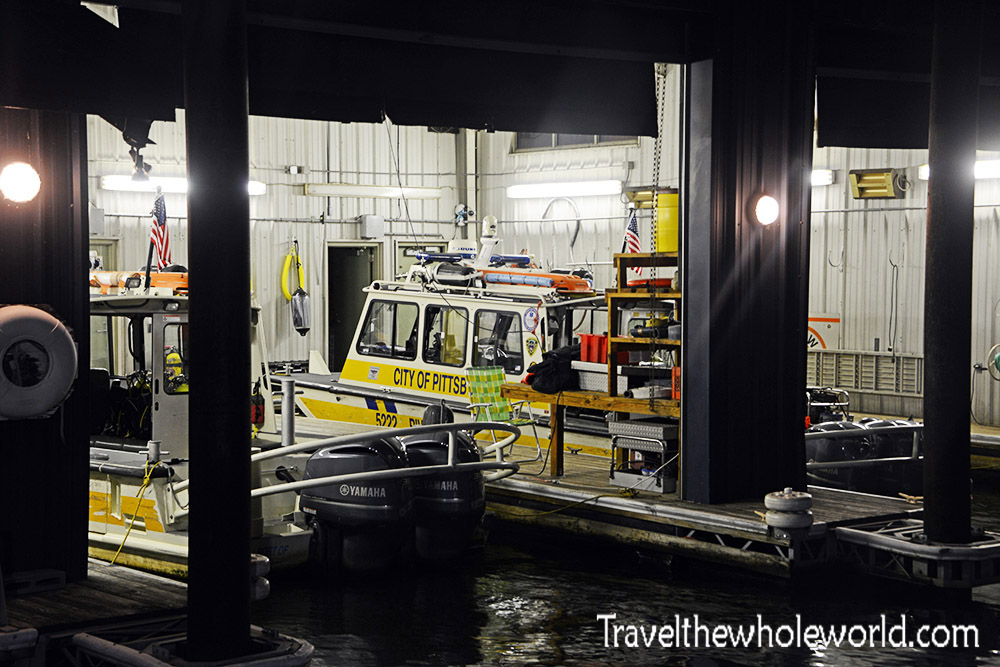 On the other side of the bridge, we found a nice outdoor park next to PNC stadium. There was a nice area to walk along the shoreline, and underneath the bridge there was even a police station. It’s strange for me to think of Pittsburgh needing to have police boats being so far inland, but of course with the three major rivers that converge in the city it makes perfect sense. 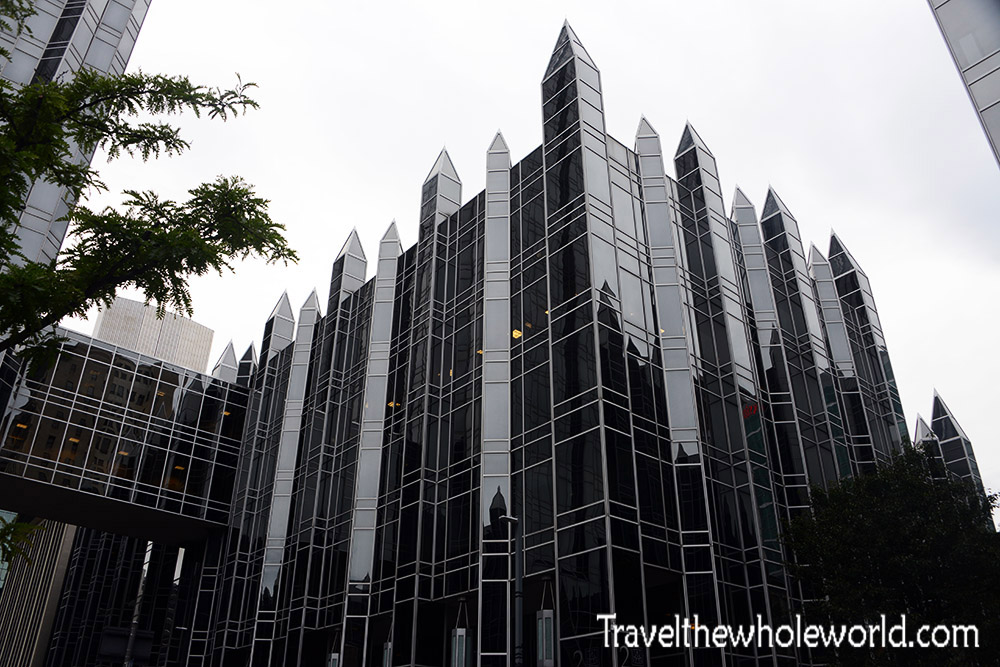 My favorite thing about Pittsburgh was their architecture for sure. With Gothic and other unique designs throughout the city, just walking around is enough to have a good time. The building above shows some of the city’s modern architecture, while the photo below shows a 19th century bank with the Beaux Arts design. After you explore here for just a few hours it will be obvious why Pittsburgh was chosen to be the city to film Batman! 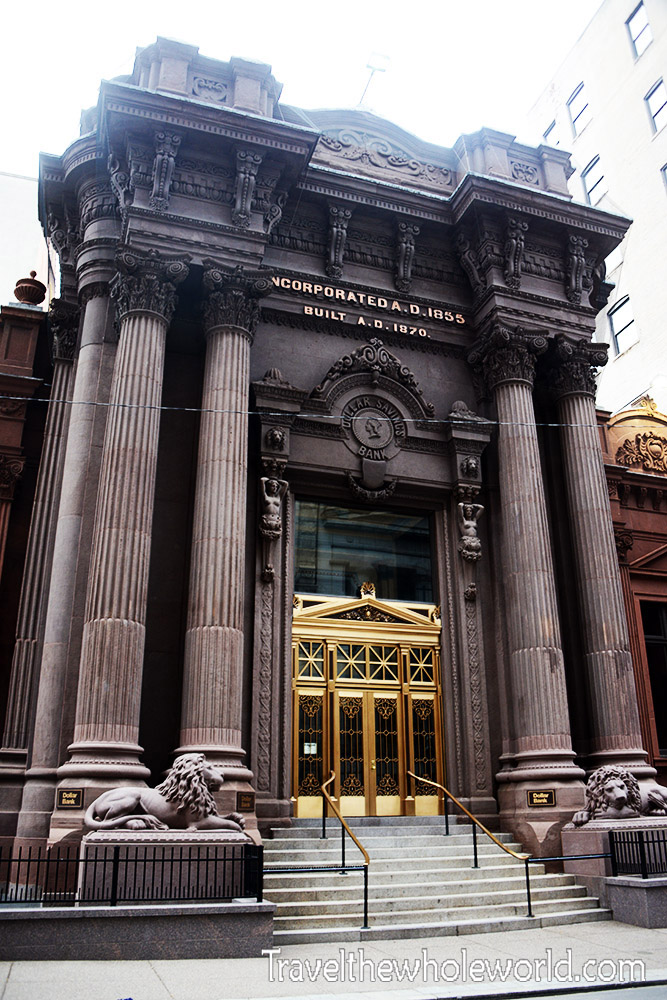 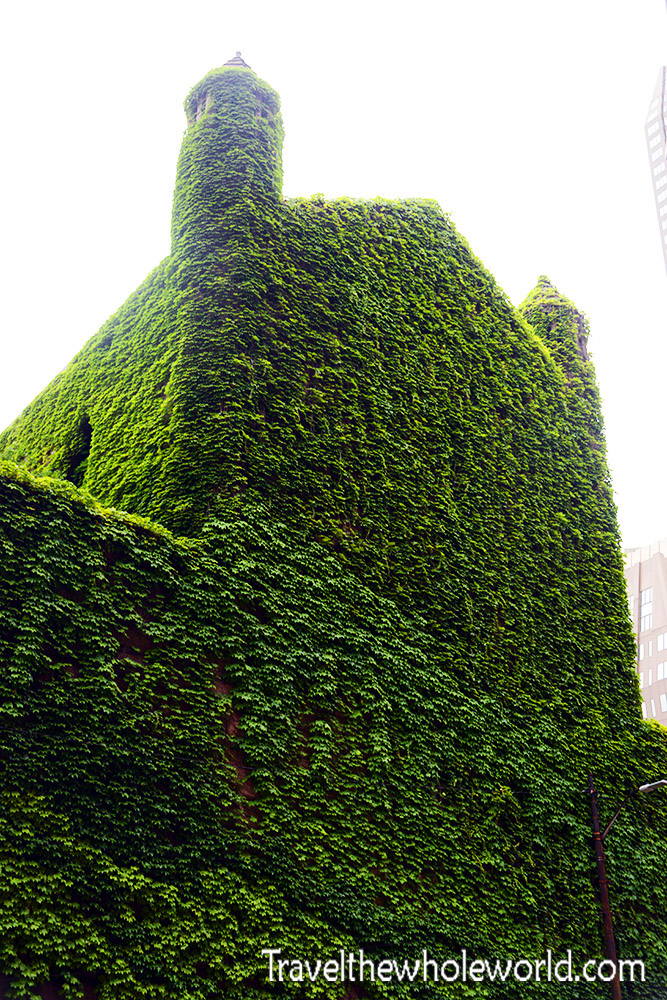 Another interesting sight was this castle like structure that has been completely taken over by ivy. We weren’t ever able to find out what this place was, because it seemed walled off like a compound. If it was a private residence, which I really doubt, it’s likely one of the richest people in the city. 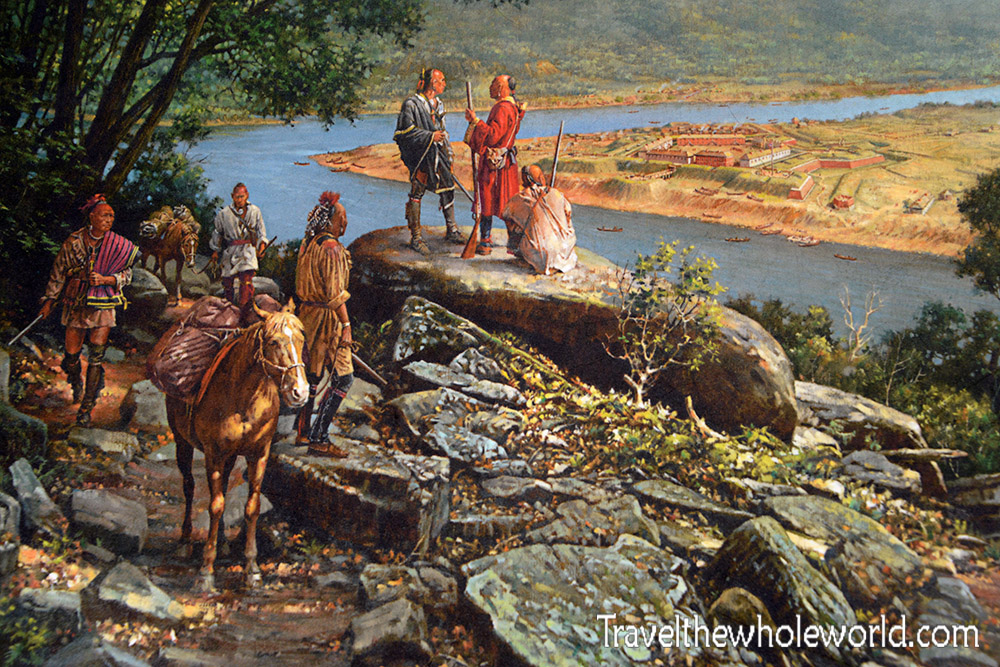 Pittsburgh’s history can be traced back to the 1700’s when the French built a fort at the convergence of the three rivers. The initial name for the fort was Duquesne, but it was later attacked and destroyed by the British. The British rebuilt the fort and named it after William Pitt, the 1st Earl of Chatham. Fort Pitt led to the development of a small town that was initially called Pittsborough, with a drawing of Native Americans looking over it above. Over 100 years later it grew to be a city and changed its name to Pittsburg, and finally from the early 20th century it became known as Pittsburgh. The photo below is of a drawing of what Pittsburgh looked like in 1902; by then it was already one of the largest cities in America. 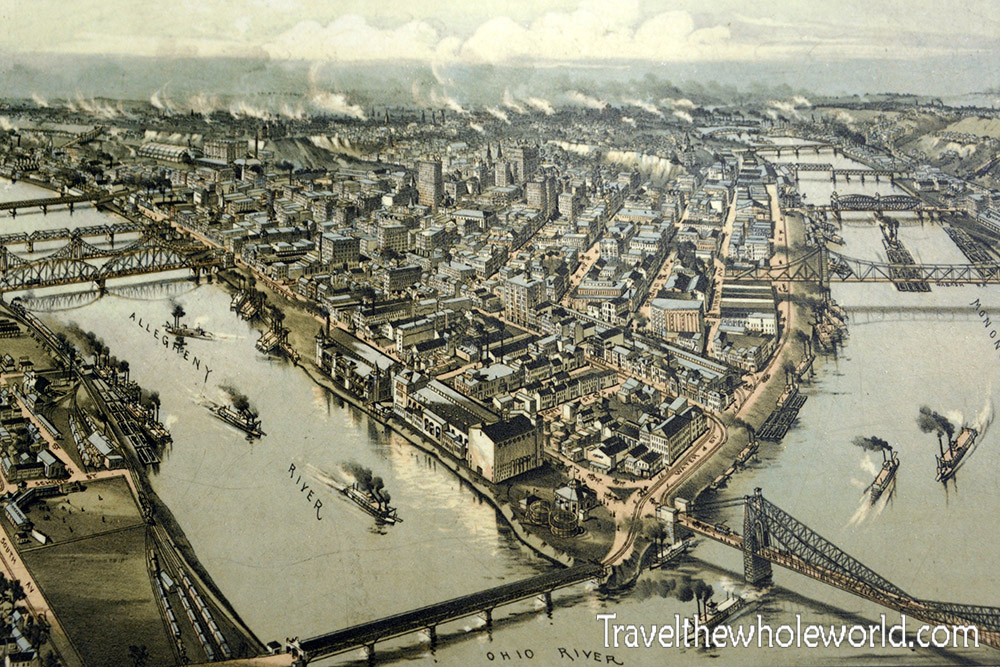 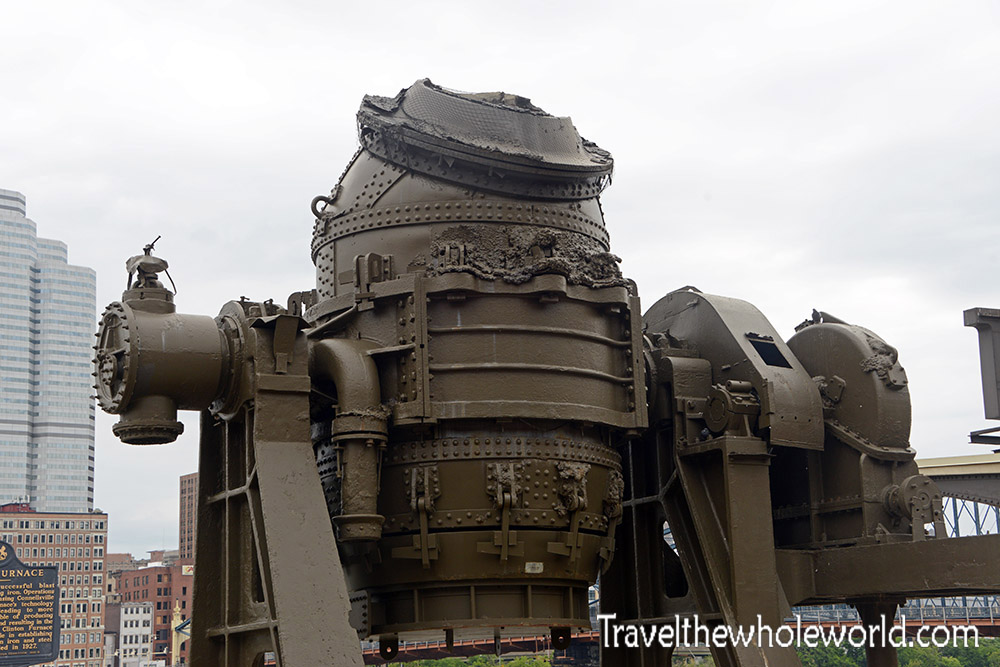 The reason Pittsburgh grew to be such a big city was because of its strategic location, and its infrastructure for developing metals. New technology in furnaces that came out in Pittsburgh allowed the city to get a major edge in steel production, and earn a new nickname, “Steel City”. Pittsburgh quickly grew to be one of the largest industrial cities in the United States as well as the world. This photo above in Station Square shows the type of furnace that revolutionized the industry. While there is now fierce competition from steel production from countries like China, Pittsburgh still remains one of the largest producers in the world. 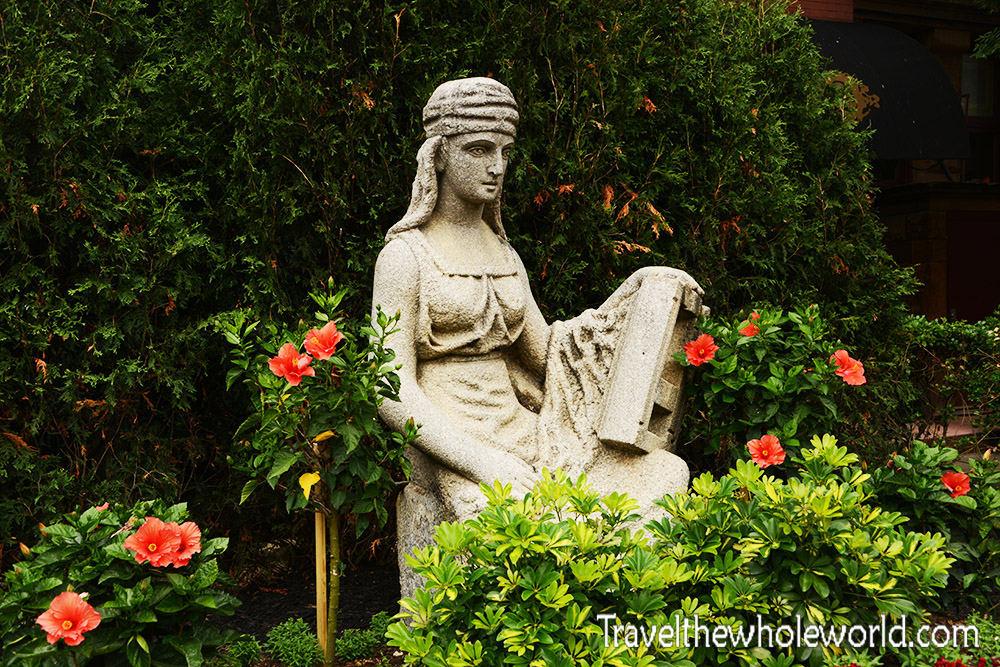 My friends and I stopped at Station Square after we heard it was a great place to visit. Supposedly it was a lively neighborhood full of restaurants, bars, and a few interesting places to check out such as the steel furnace. Overall it was a bit disappointing to be honest. I found it more of a small indoor mall rather than some bustling district. The mall was nearly abandoned when we went inside, to a point that we were wondering if it was closed and we weren’t supposed to be inside. We did find a nice coffee shop here where we hung out for a bit. In Station Square’s defense, we did visit on a Sunday which was already a national holiday, so many things were already closed. I’ve seen some photos taken in the evening where there looks to be a lot more going on. This photo above is of a statue in Station Square that belonged to a luxury hotel, so there’s definitely some nice places here and we likely didn’t give it a fair chance. 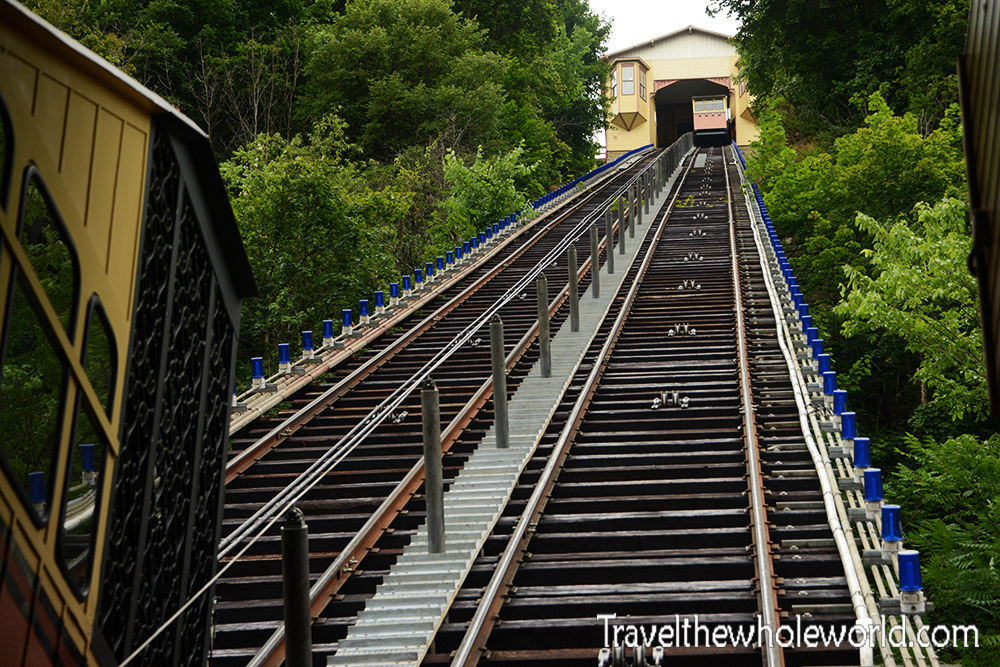 Mostly we had visited Station Square because it was so close to the Pittsburgh Duquesne Incline, or tram as I like to call it. This tram has a little bit of history to it; it once was steam powered and used to haul cargo up this small hill known as Mt. Washington in the late 1800’s. After this use was no longer needed, it basically became used to connect this part of Pittsburgh to the Mt. Washington neighborhood, with one of the larger houses photographed below. These neighborhoods are worth visiting, because you can find a few nice restaurants with great views of the city. This is actually where we got the view of Pittsburgh where you can see the three rivers converging. From here we could even see the Cathedral of Learning in the distance, which became our next destination. 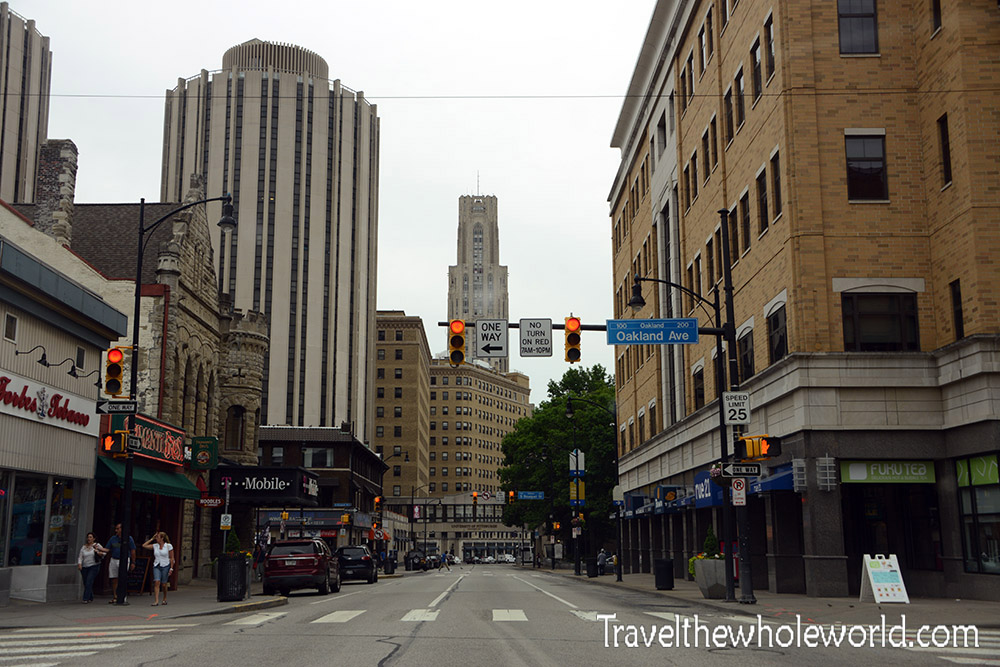 From Station Square we ended up driving to the Cathedral of Learning, which can be seen above as we pass through the neighborhood of Oakland. Oakland actually has quite a lot to do, with several museums, historic places, universities, and even different districts with their own character. 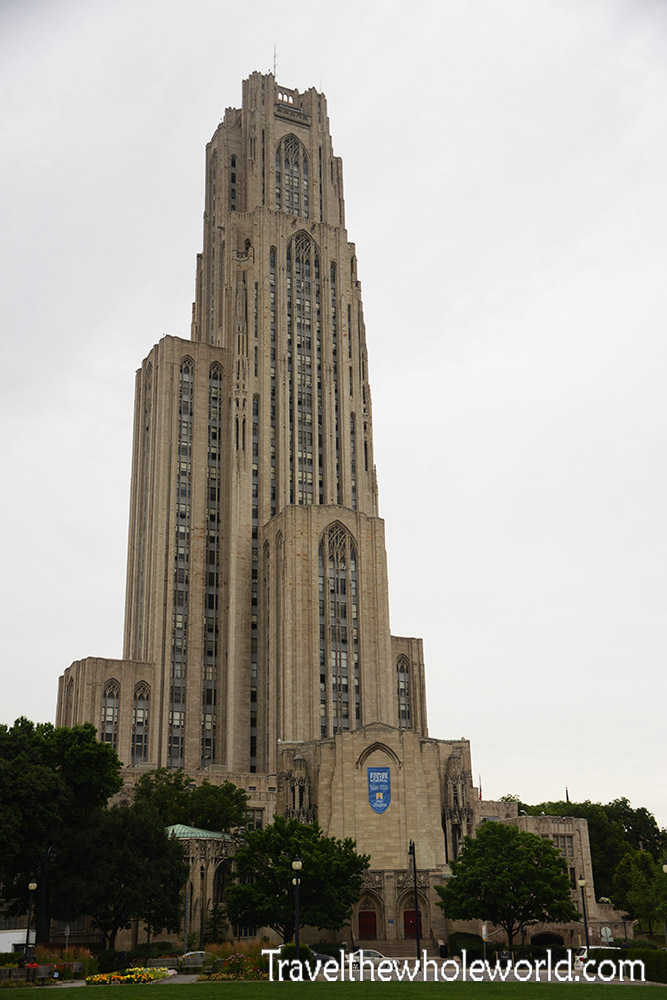 The weather wasn’t great by the time we got here, but nevertheless the Cathedral of Learning is another impressive sight in the city. This Catholic university is famous for its prominent tower, which has been watching over Pittsburgh since the early 1930’s. The building is also said to be the second tallest Gothic tower in the world, and has over 2,000 rooms inside! 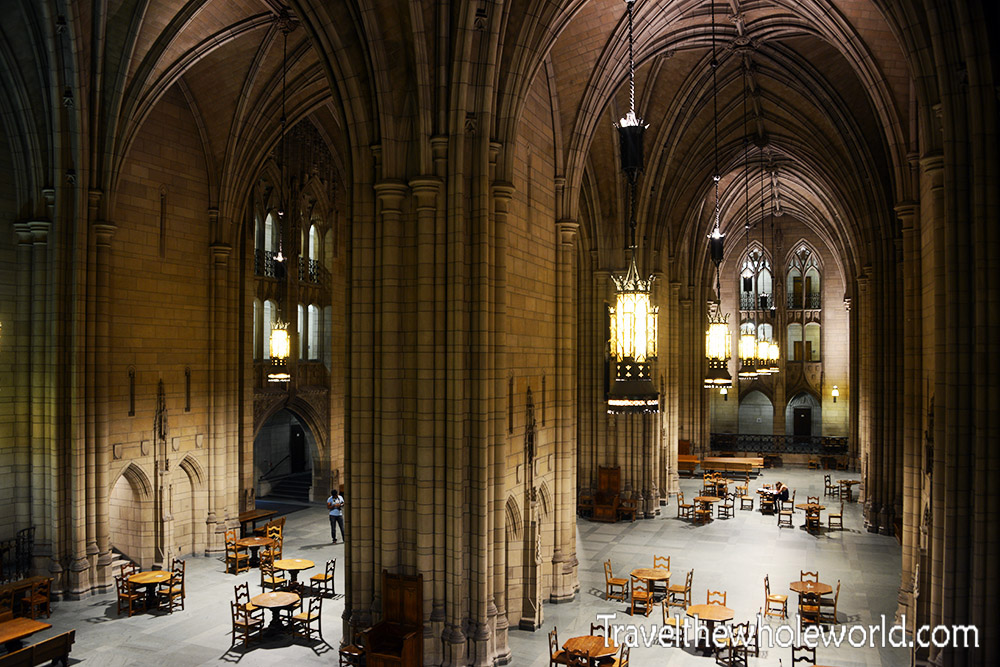 The inside of the cathedral was as impressive as the outside. Of course we didn’t have access to most of the university, and there is no public viewing deck, but we were still able to get high enough up and find a good vantage point of the city. For the most part we were limited to areas like the main floor where these two photos were taken. I would have loved to been able to fully explore the rest of the building, it’s one of the most prestigious universities in the country with multiple nationally ranked areas of study. 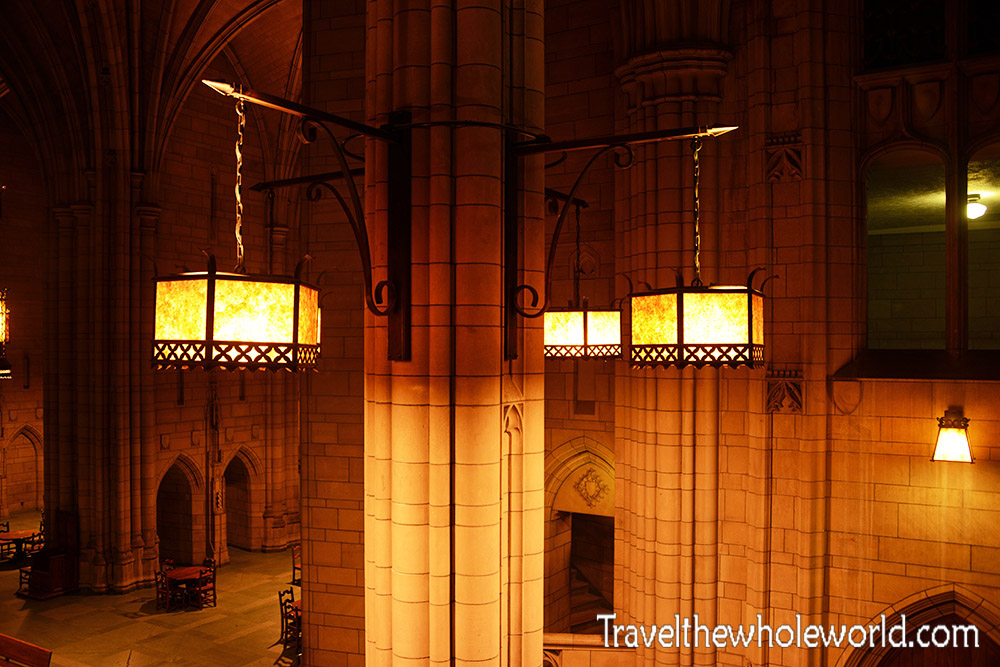 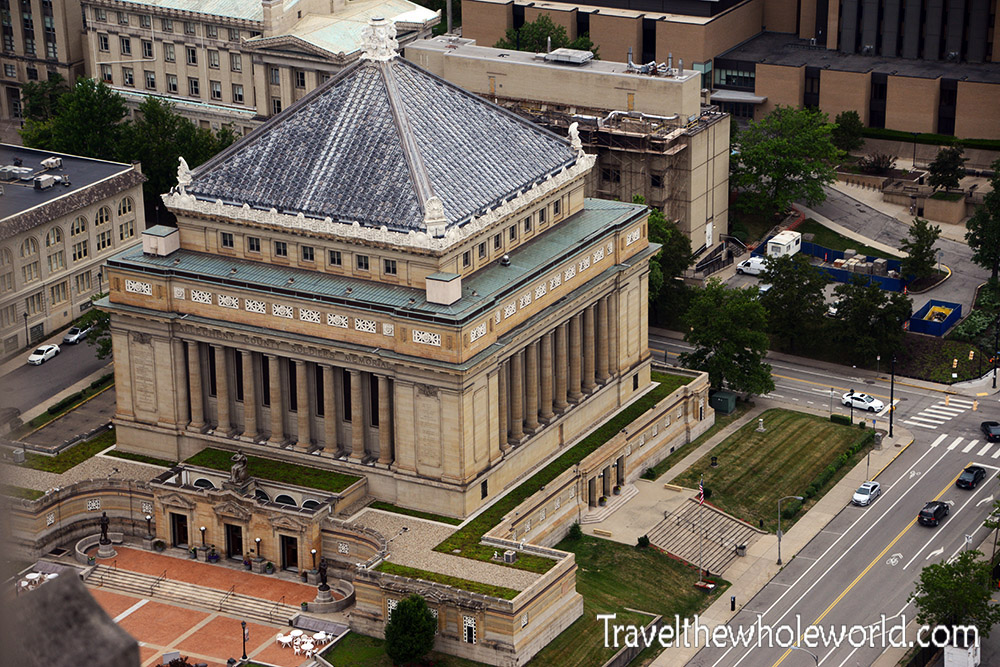 One of the things we could see from the Cathedral of Learning was the Soldier’s and Sailor’s Memorial and Museum. This was closed because of the holiday weekend, but it’s actually the largest memorial in the country that is dedicated to all military branches. Since I had served in the Marines once upon a time, of course I had been interested in visiting, but Pittsburgh is large enough that a weekend is certainly not enough time. 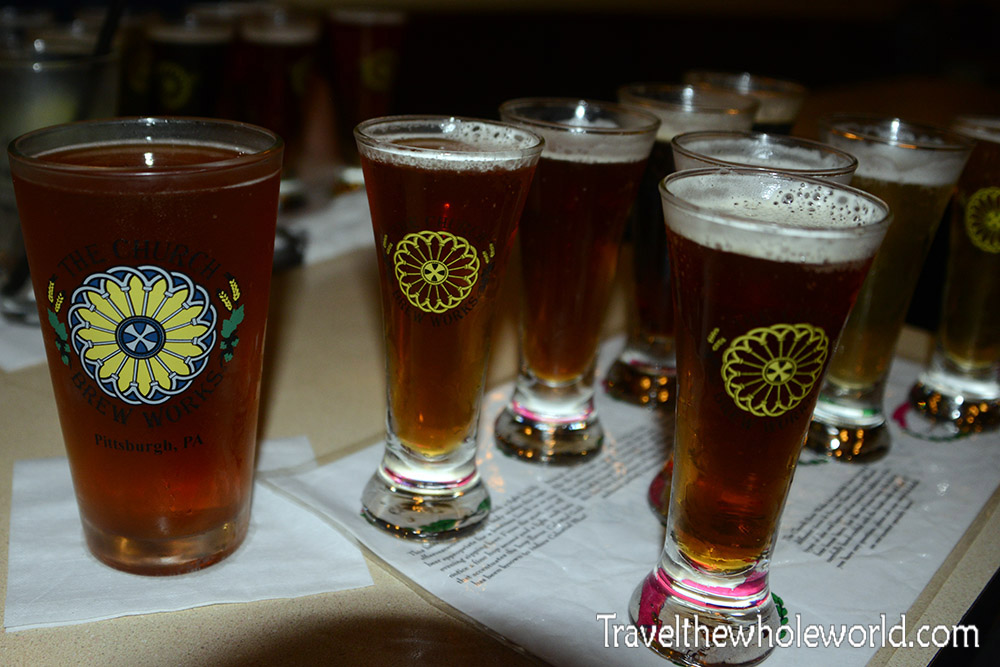 With no chance for the museum, we ended up going to a different church that might be interesting to visit by some, or former church I should say! Formerly St. John the Baptist Church, this building was purchased and since converted to a restaurant and brewery known as the Church Brew Works. I’m not very religious myself, but still feel like it might be sad for those who used to worship here to see what their church as become. Otherwise it’s a fun place to visit, with a large menu for both food and drinks, and of course a unique atmosphere. As you can see, by the time my friends and I got here we were a bit thirsty! 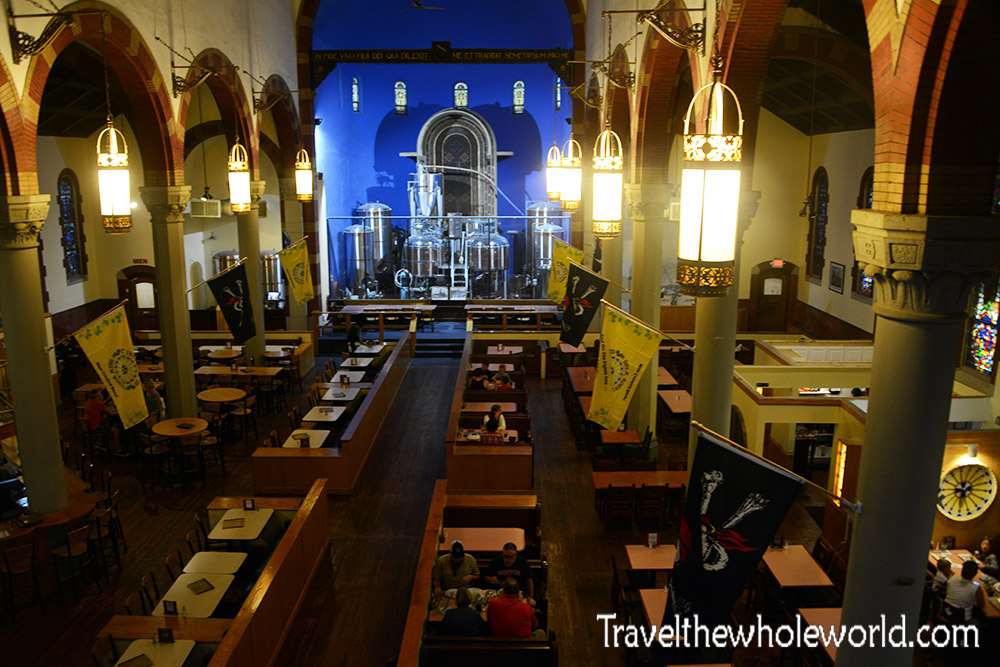 This photo above was taken after we decided to climb the stairs to where the organ player used to be. There was a sign and chain blocking the stairs so it was clear we were not allowed to go up there, but since it just took a few seconds we didn’t see the harm in it. Almost immediately one of the workers saw us and ran up the stairs having a nervous breakdown. She was incredibly angry, and I’m not too sure why. Luckily this happened after we had already had our beers and were on our way out anyway, but we ended up getting a rude escort to the front door. 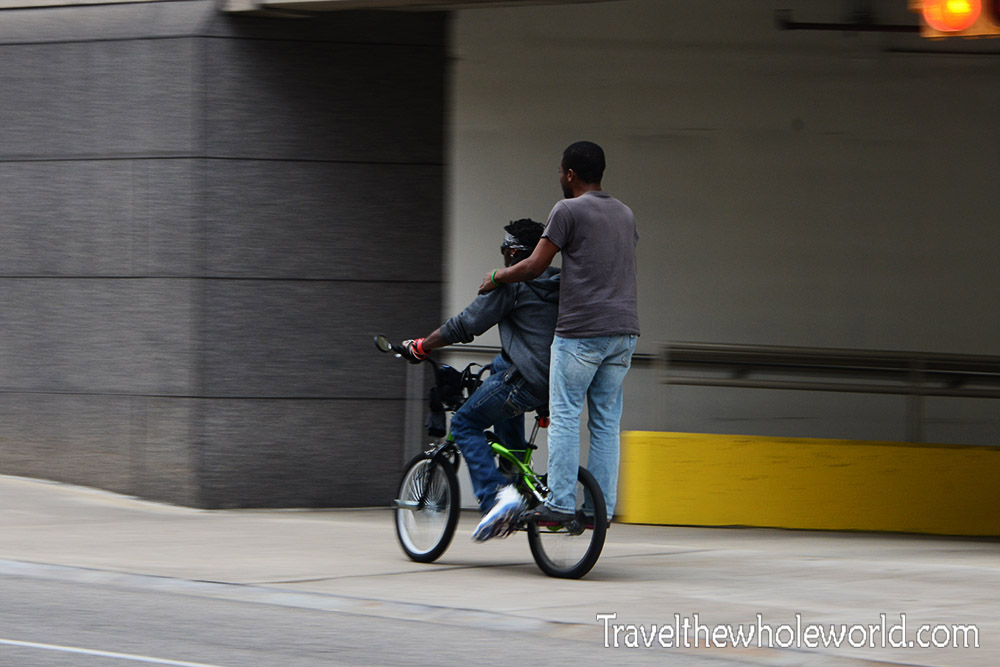 From Oakland, we decided to do a long walk through the city back to the downtown areas. The walk was further than we thought, and would have been better off riding a bike like these guys. We actually had a bunch of friendly encounters with locals along the way once we left some of the touristy parts of the city. 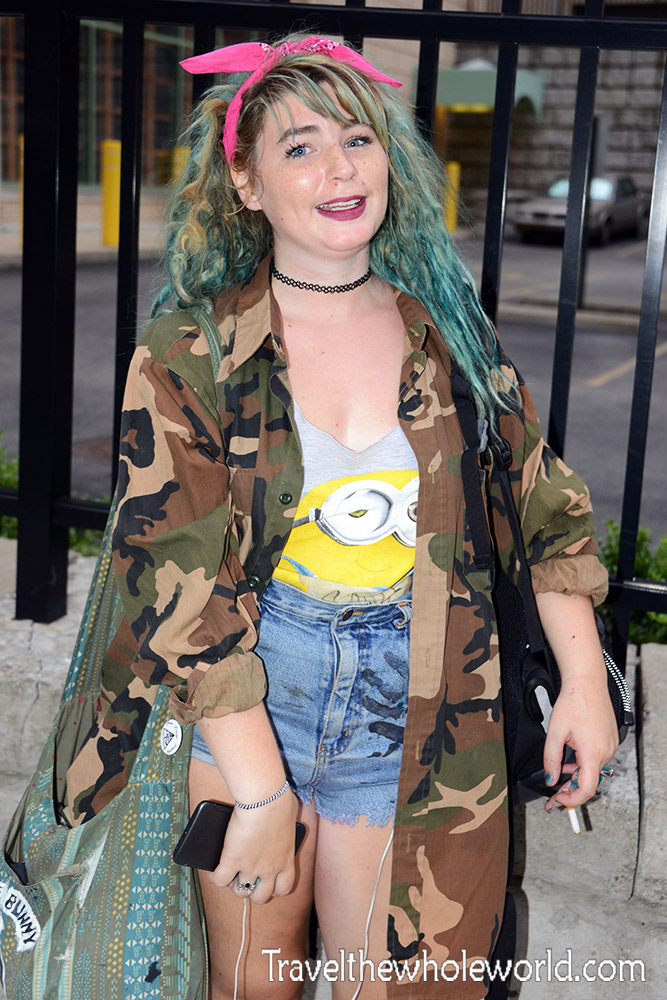 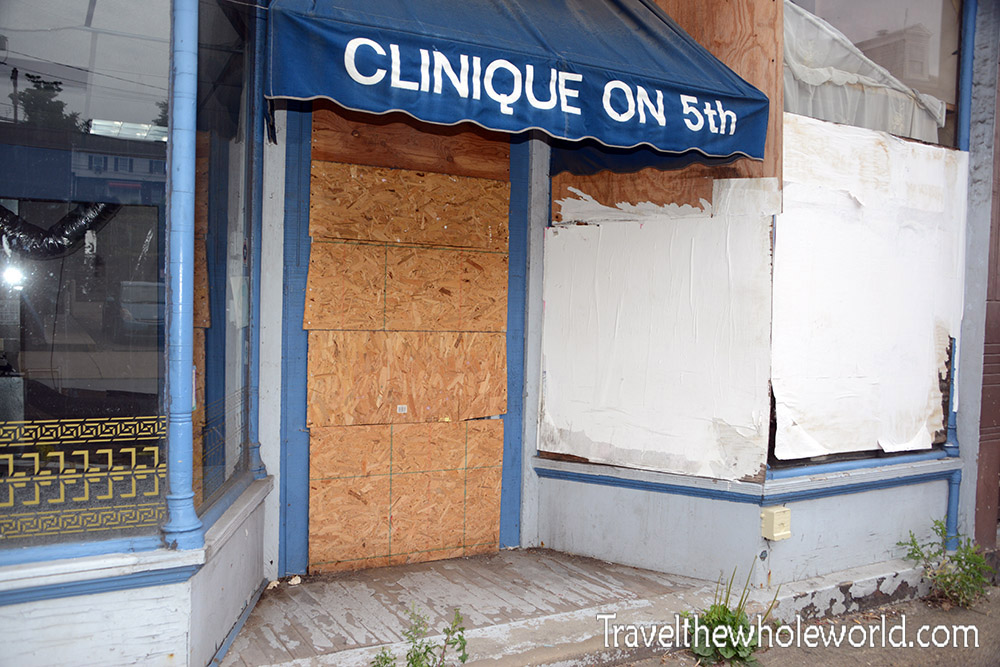 Somewhere between downtown Pittsburgh and Oakland, we entered a long stretch of abandoned buildings. The neighborhoods weren’t particularly scary or anything, but it was a bit surprising to see such a large part of the city in this condition, especially considering this area was located between Pittsburgh’s busiest districts. 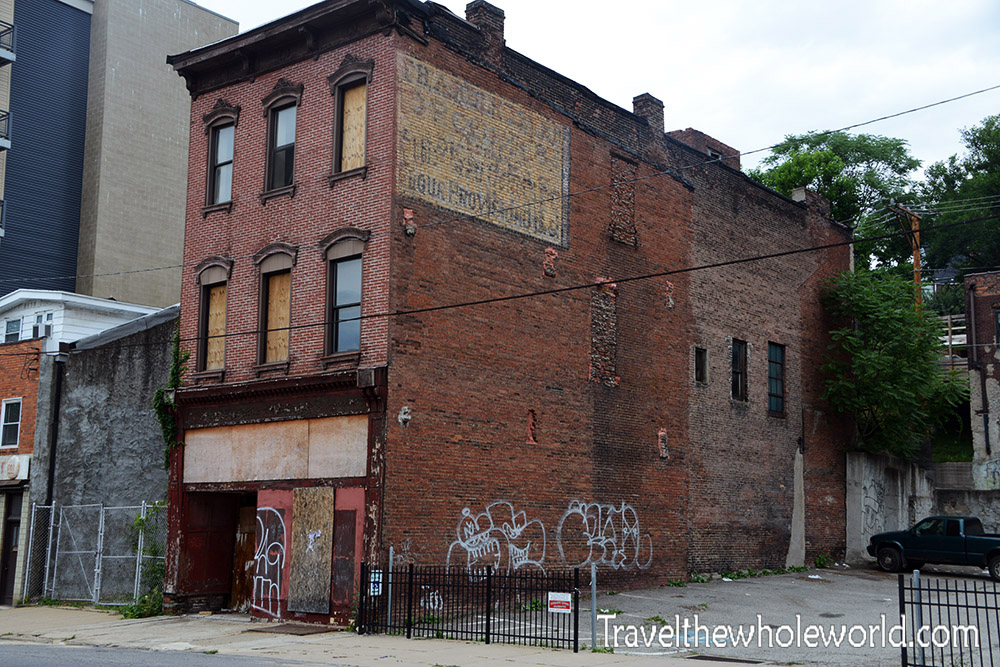 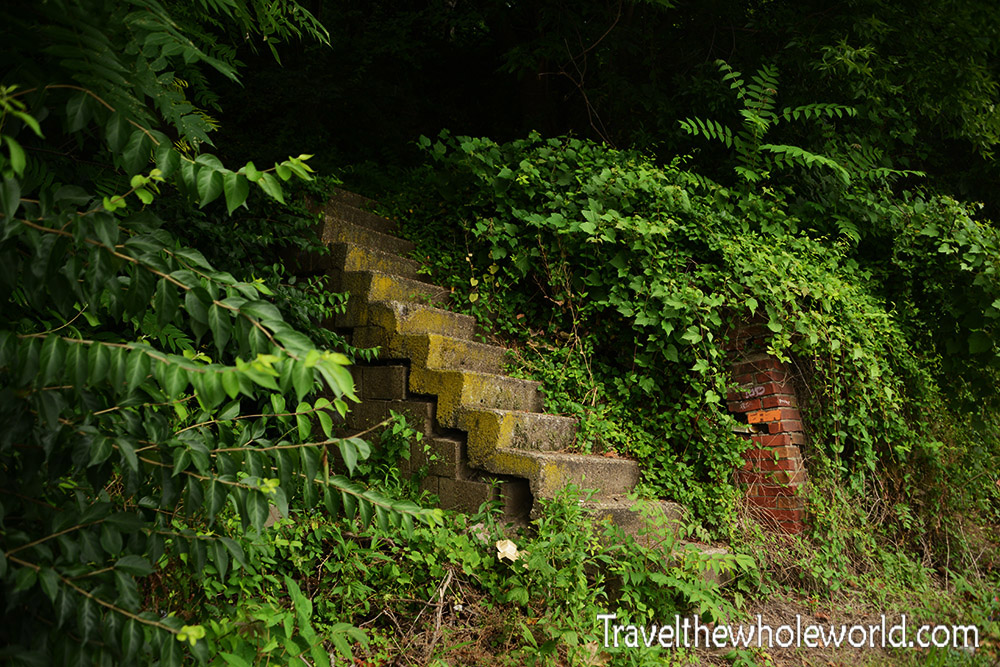 The abandoned part of the city seemed to stretch well over a mile. We hit a part that had a mix of a few stores that were still open along side abandoned ones. One part even had some abandoned houses that were being over taken by nature. I feel like if this area ever gets developed, it’d be prime real estate in the heart of the city! The only other things of interest we came across was a heavily intoxicated person who was vomiting during daylight hours, and this Santa Claus hanging out in July. 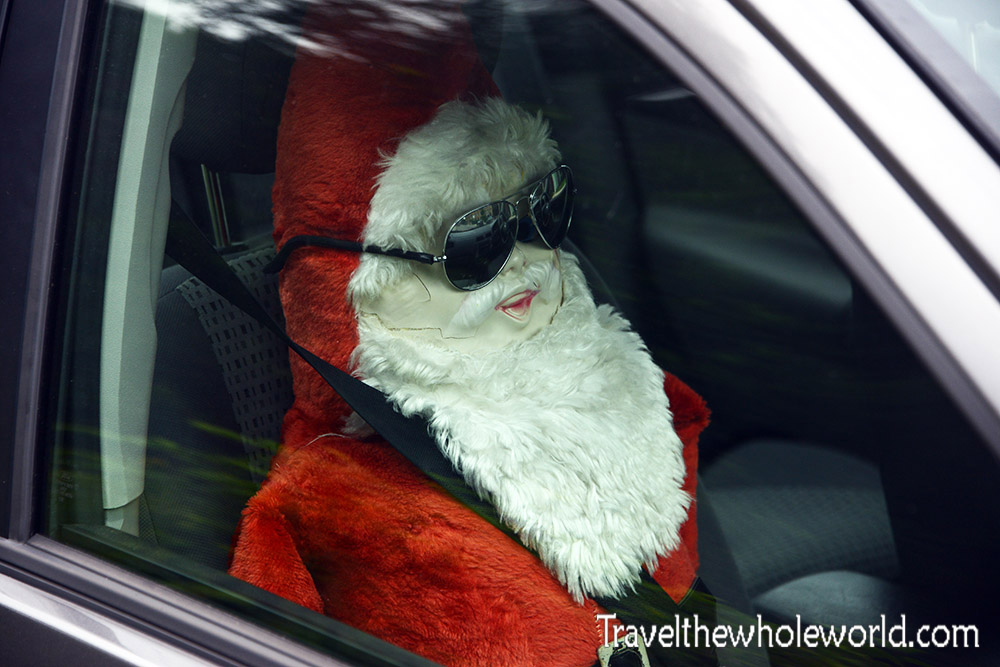 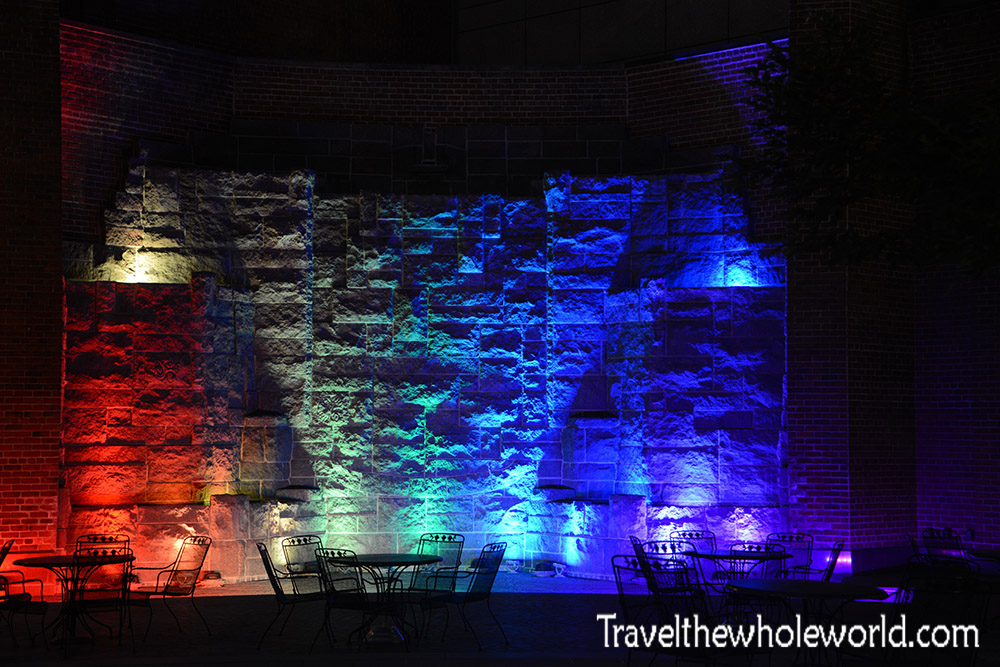 We seemed to pass by one empty street after another until suddenly stumbling back into the downtown area. At first we were coming across nice areas of the city again, although most were still closed. We then reached downtown again photographed below, were we no longer felt like we were the only ones in the entire city. 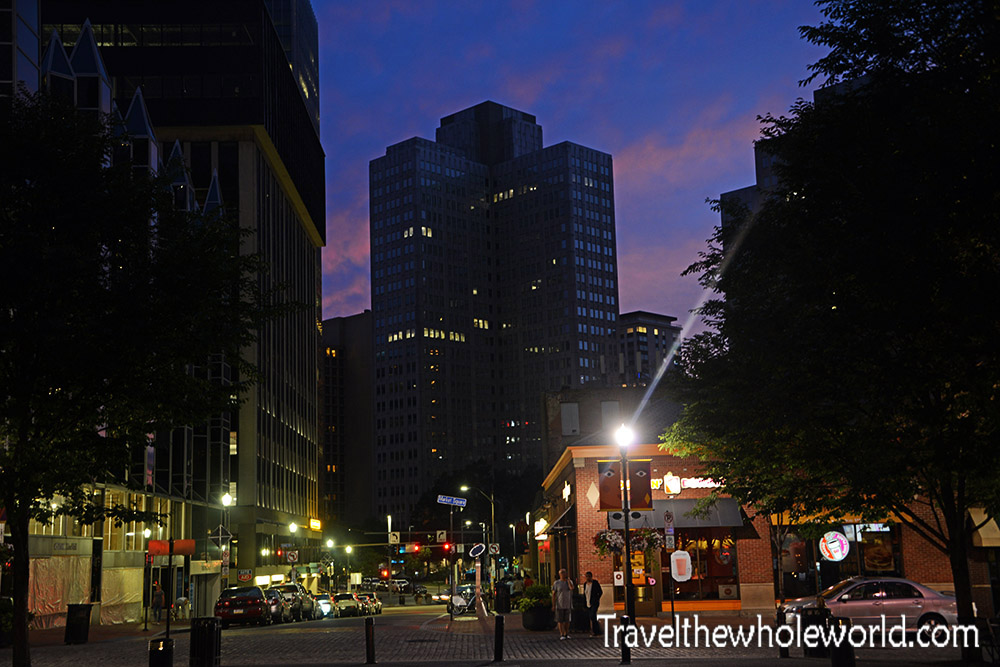 We ended up going to Market Square, which was by far the liveliest part of the city we had so far visited. The square was actually pretty packed with a variety of options for restaurants and bars, and was a perfect place for us to end our trip with some great food and drinks! 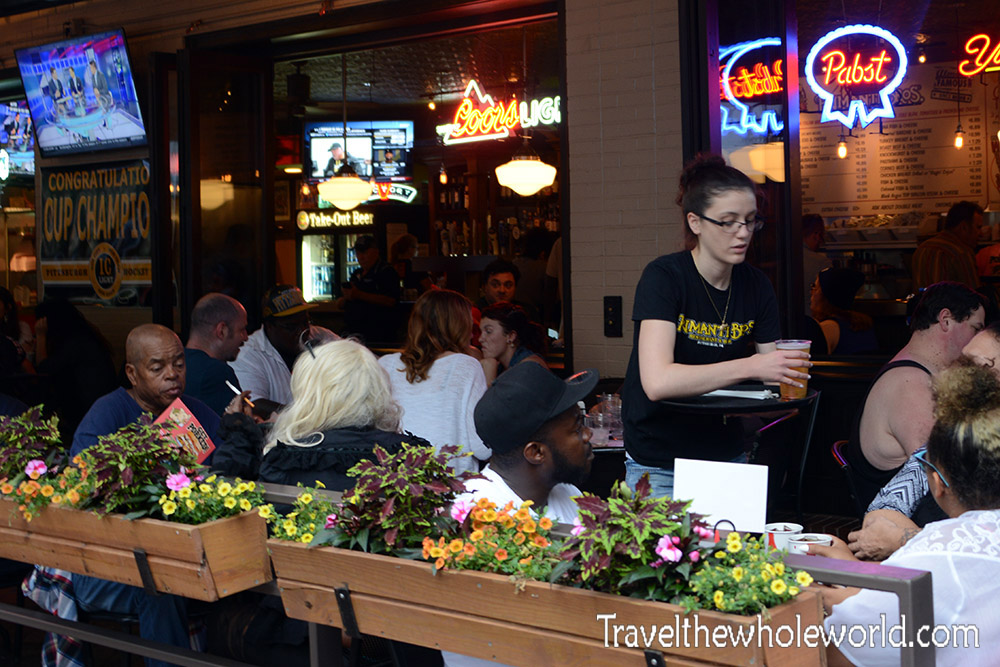