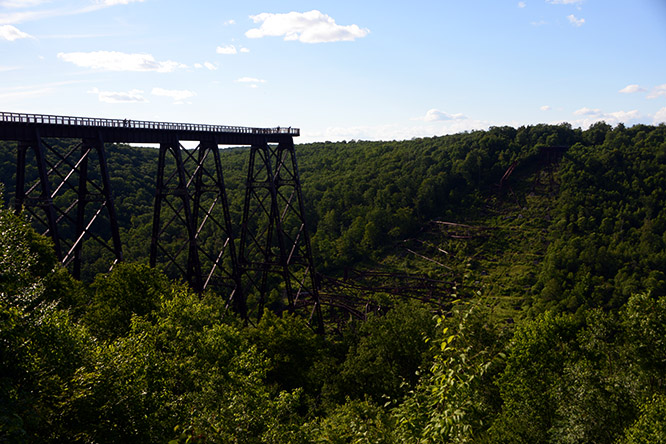 My friends and I visited the Allegheny National Forest on a random road trip, and our very visit stop was a visit to Kinzua Bridge. I had never heard of the bridge until this trip to Pennsylvania, and on top of that I hadn’t even realized it was destroyed! Instead of scrapping the entire bridge, it’s been left as it is for the most part. It’s now a bit of a tourist attraction and the remaining bridge acts as an overlook. 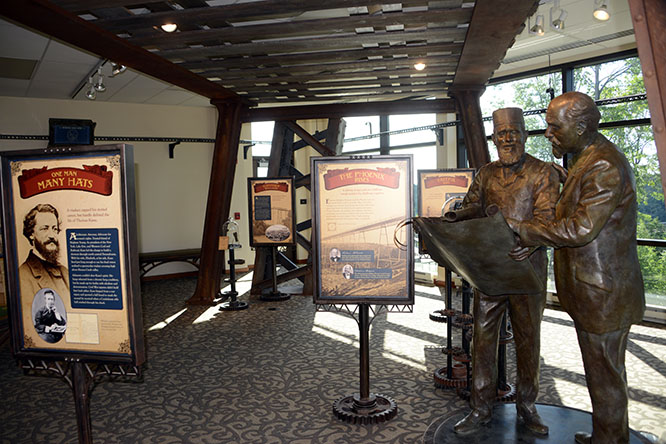 When we visited the bridge we found there was a bran new visitor center and museum. The lady behind the desk told us they had just opened up the day before for the first time ever! The museum gave the stroy about the bridge and what eventually destroyed it. Built in 1882, the Kinzua Bridge even held the record of the highest railroad bridge in the world. That record only lasted two short years, but regardless it was a very impressive feat! 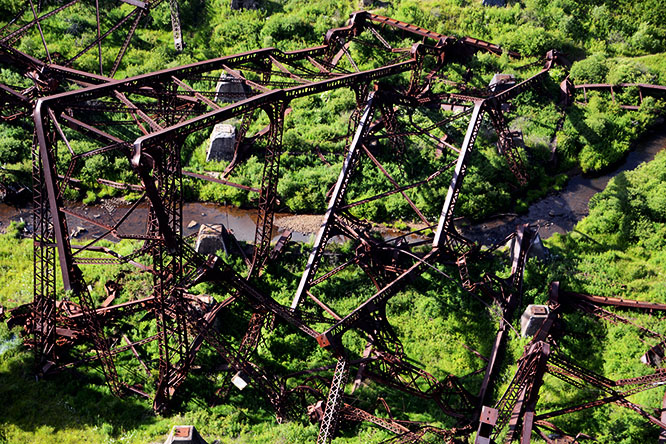 The bridge was built to help deliver coal around the country. It stayed in use until 1959, and for the next few decades was a tourist attraction. It was actually closed down to be restored in 2002. During 2003 when the restoration was still on going, a tornado of all things passed through the valley and did the damage seen in the surrounding photos. 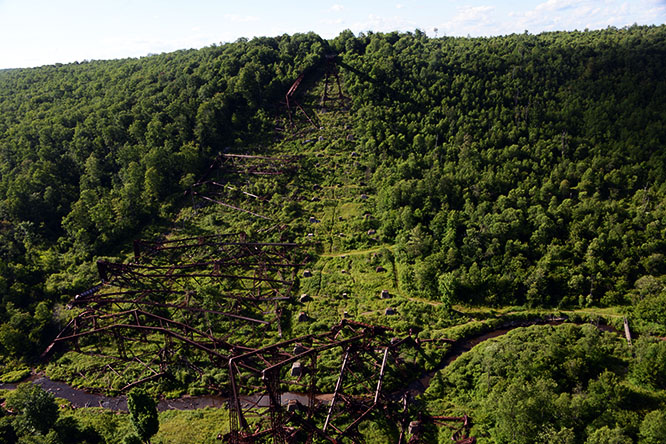 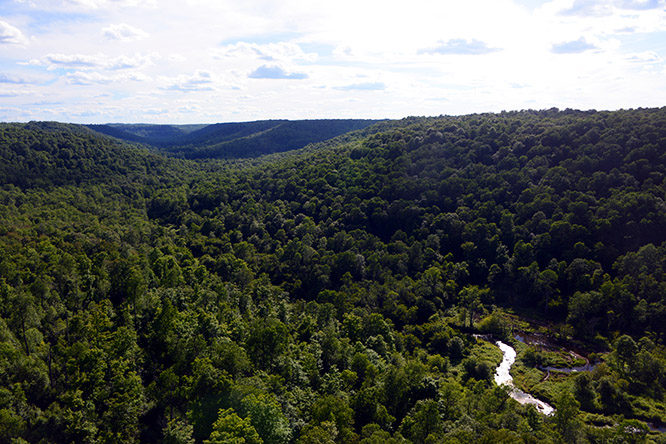 The costs to rebuild the bridge would have been around 45 million dollars. Since the bridge was no longer transporting coal and running trains it didn’t make much sense to rebuild it. Instead the bridge was mostly left as it was, with the furthest intact point becoming a viewpoint of the surrounding natural beauty and wreckage below. These photos above and below were taken of the views from the bridge. It’s supposed to be especially beautiful here during the fall season! 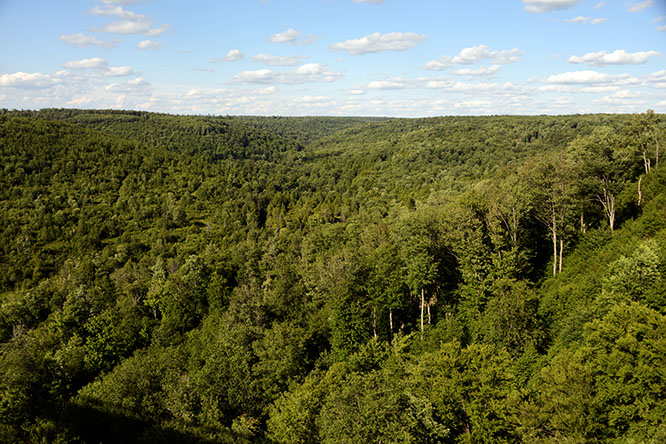 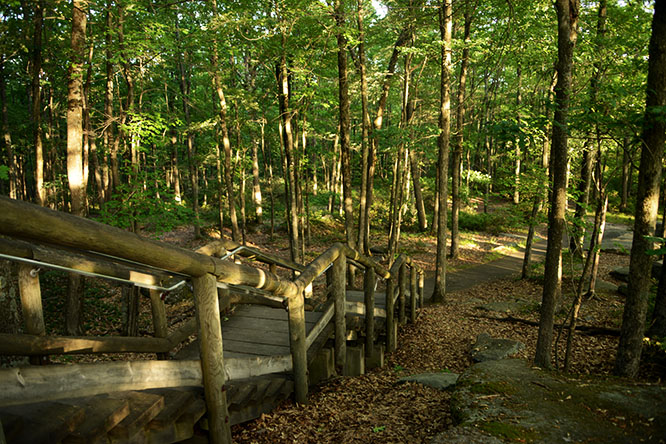 After visiting Kinuza Bridge, we drove out to do a hike and camp for the night in the Allegheny mountains. We had original plans to do a much longer trail but because we arrived so late we switched to the Rimrock trail. The trail starts off at a parking lot and immediately goes down these stairs photographed above. 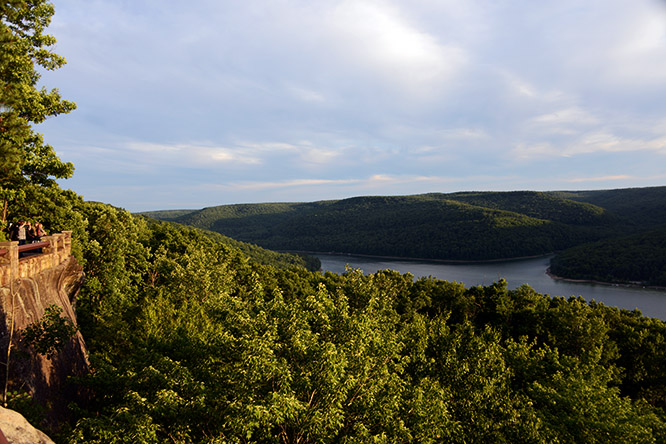 The Rimrock Overlook is apparently one of the best in the Allegheny mountains. This photo above shows part of the overlook and below is the view on the opposite direction. The river running by is the Allegheny river on its way south to Pittsburgh. There it combines with the Monongahela river to become the Ohio. 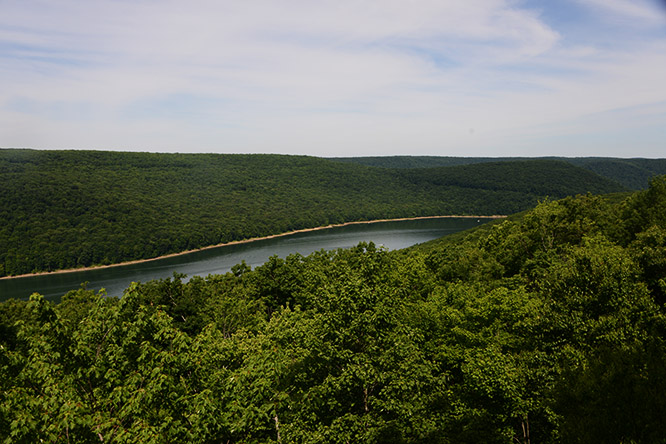 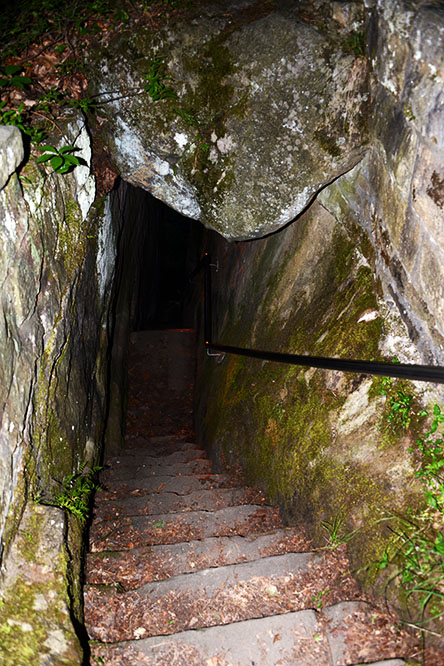 From the overlook, my friends and I planned to hike just a mile towards the river and camp somewhere in the woods. From the map we knew there was a trail going down to what’s known as Kinzua Beach. We actually had trouble finding it, and even briefly navigated through some thick bushes before deciding this couldn’t be right. Finally we returned to the overlook where a local pointed out the stairs. We all felt less stupid after seeing this, because the stairs aren’t visible unless you’re standing right in front of them. They actually go through a section of the overlook and you wouldn’t think stairs would be built here! After going down the steep and narrow passage there was a sign confirming we were on the Rimrock trail. 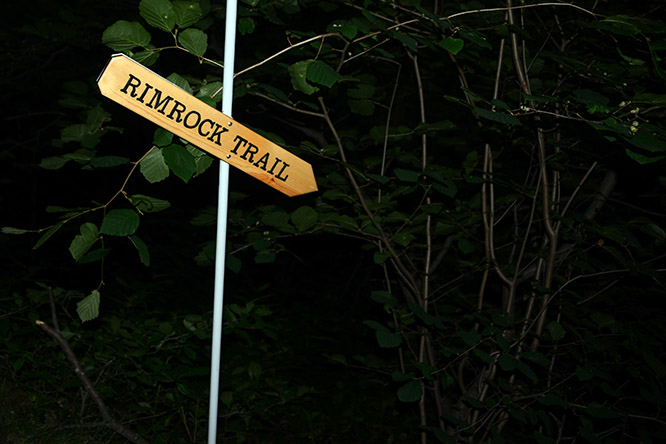 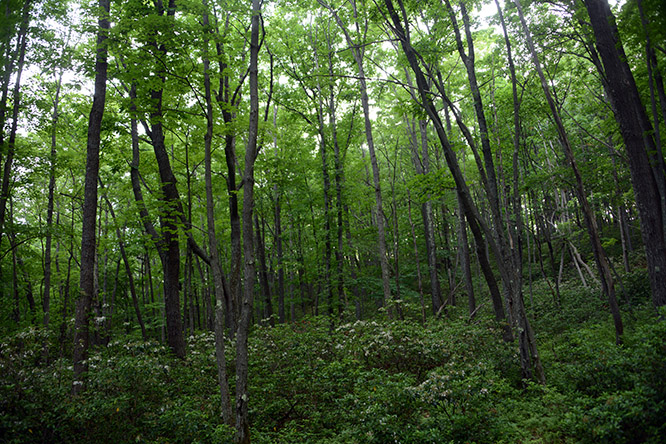 Here’s a photo of the woods that we hiked in when we were off trail and nearly camped in. The Allegheny National Forest is home to black bears, turkey, and deer. Elk used to live in the forest but no longer. I had hoped to see some large bears but we never came across any. Photographed below is the only mammal I saw! I must have seen a dozen chipmunks in the forest, so you’d think there would be a good snake population here. 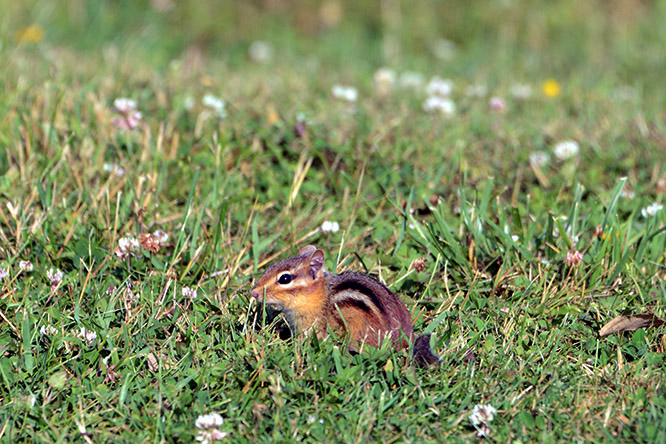 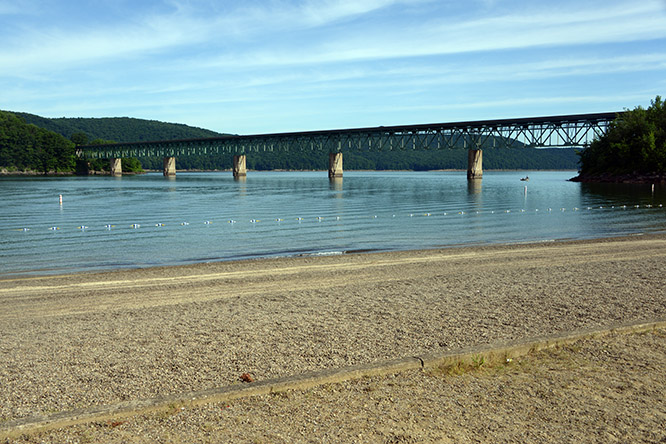 The chipmunk was actually in a grassy field right by Kinzua Beach. Kinzua beach is photographed above and is a pretty small area where people can take a swim if they want. We were here in the morning and had it to ourselves. None of us were really motivated to jump in the water, and I’d be surprised if there were ever a lot of people who swim here! A volleyball area in the sand I could see being used however. 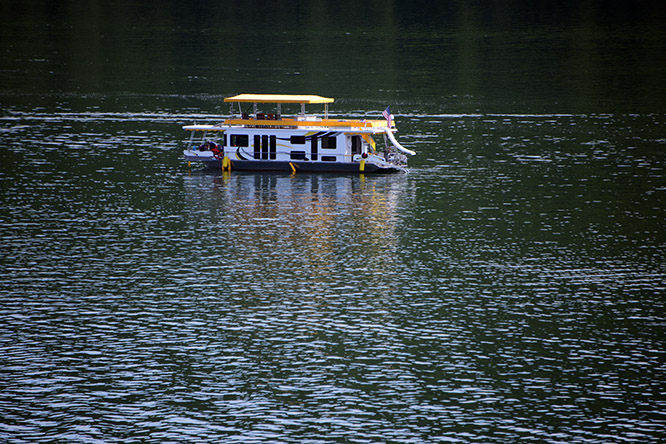 While there wasn’t anybody swimming there were a lot of people out riding their boats. This speedboat above seemed pretty common, and at night when we were sleeping we could still occasionally hear one going by. This luxury boat below was cruising down the river, and even had a second floor slide to go into the water! 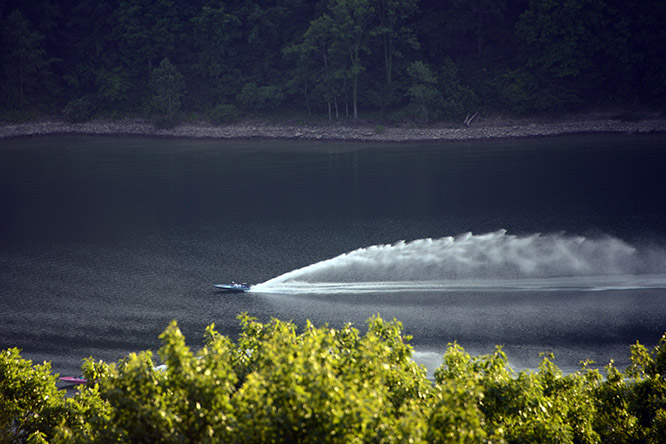 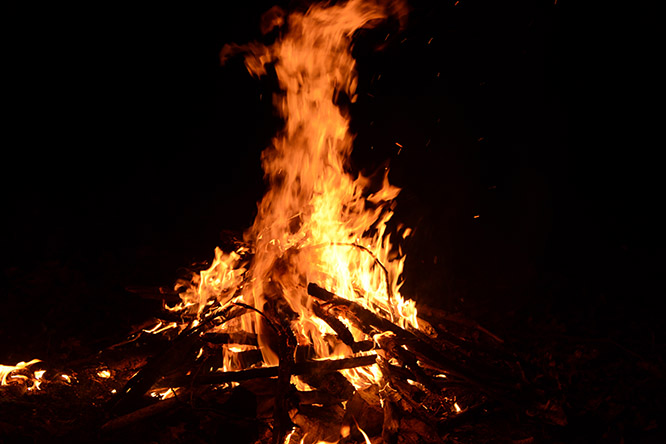 Previous to this trip, all my outdoor trips had revolved around training for Mt. Everest. This was the first time in a long time I had camped after a very easy hike. People probably rarely camp on the short Rimrock trail that we took and as a result we had plenty of firewood. Normally when I camp in places that see more people, it’s difficult to find enough logs since most have been taken. With all the extra wood we had laying around we built an unnecessarily large fire! It probably scared this salamander away that I shot below. It came out of the leaves probably disturbed by the heat. 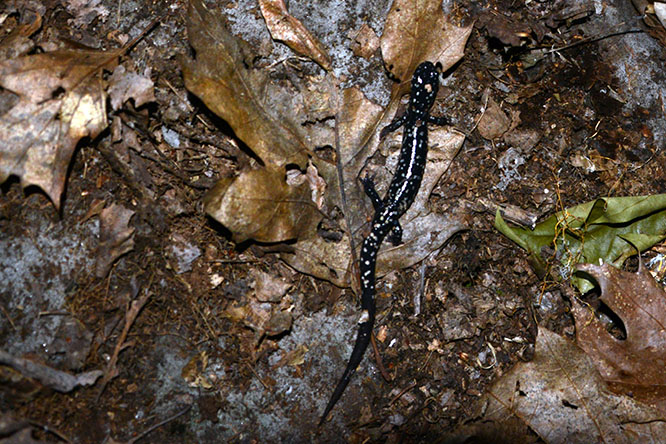 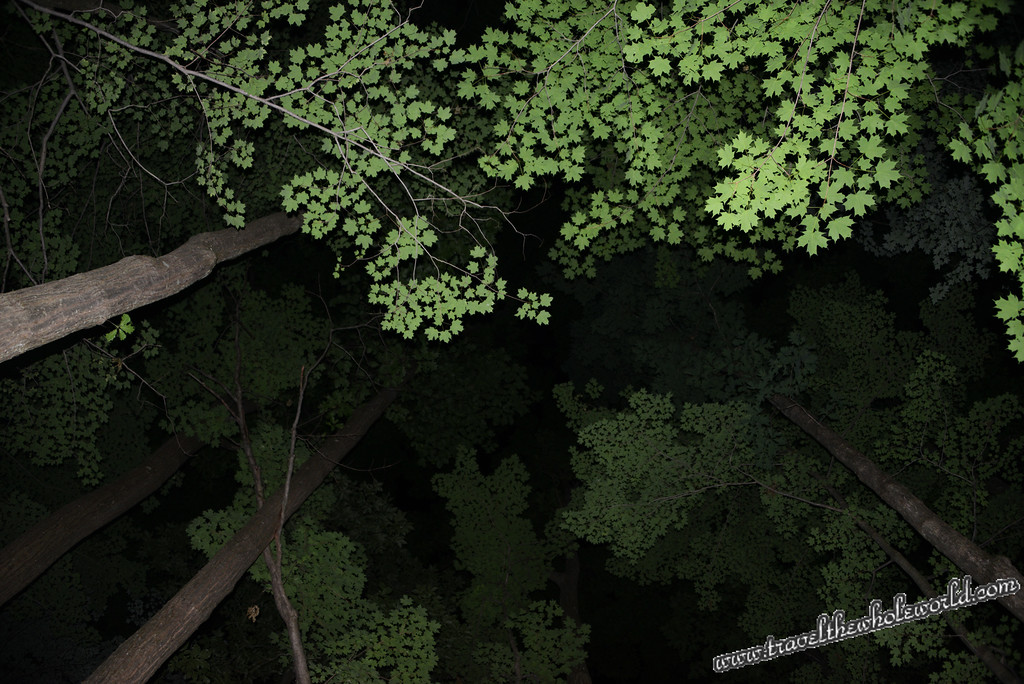 This is my final photo from Allegheny National Forest. While we had a camp fire going one of my friends who loves to cook was making some good dinner for us. We were enjoying a few beers when I decided to look up and take this photo of the forest canopy.