Located at a latitude of 69 degrees in the arctic, Tromso took me further north than I had ever been. Despite how deep into the arctic Tromso is, the weather is surprisingly warm. To compare to Alaska, Tromso would be in the upper parts of the state and much farther north than cities like Anchorage or Fairbanks. Most places in Canada and the United States at 70 degrees north easily see temperatures that hit 40 degrees below zero each winter. Believe it or not, Tromso rarely gets close to single degrees Fahrenheit (-15C). At the time of my visit, I had temperatures ranging from 20F to 35F (-5C to 3C), so it was even above freezing at times! 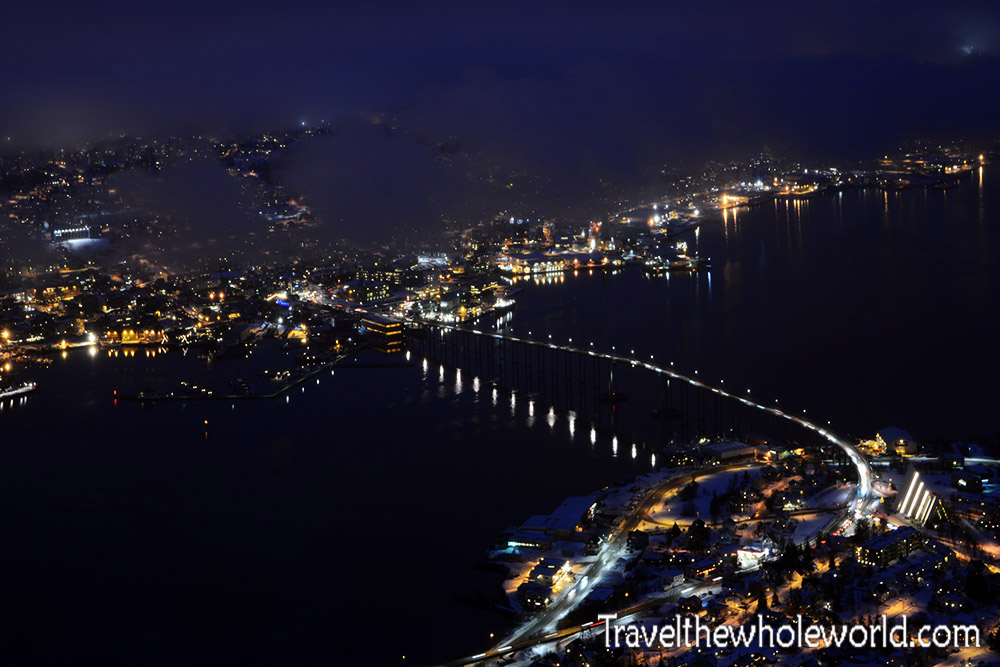 Tromso is the largest arctic city in the world after Murmansk, Russia. With good infrastructure, relatively warm weather, and well beyond the arctic circle, Tromso is often considered one of the best places in the world to view the northern lights. The photo above is one of the most famous views of the city, where you can see the Tromso Bridge crossing the Tromsøysundet straight. 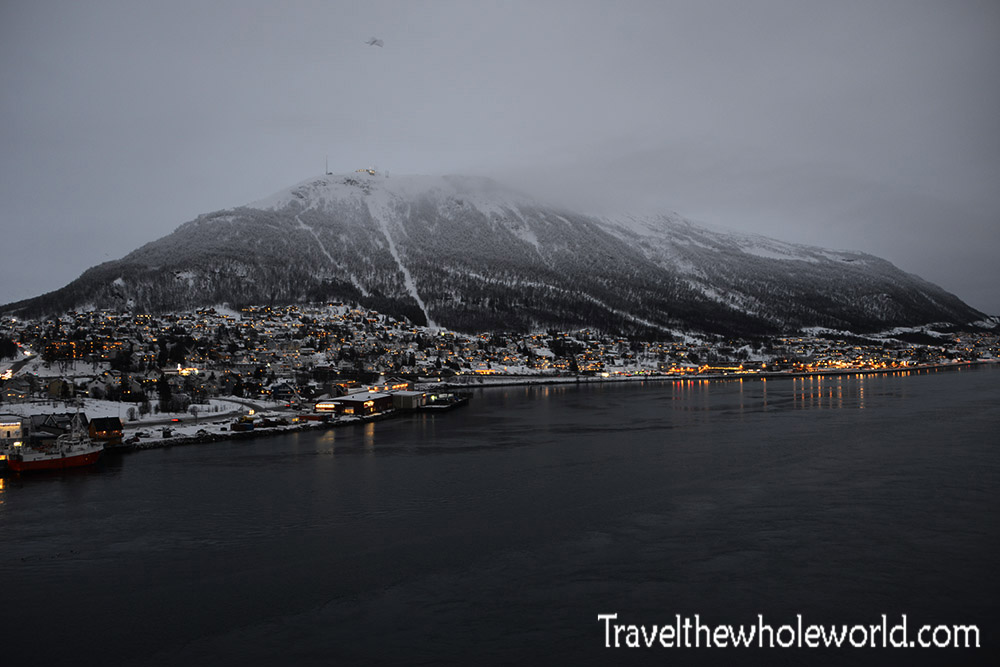 Seeing the northern lights was my main reason for visiting the arctic, but there is a lot to do here. This photo above shows a popular place to visit in Tromso, the top of that mountain which gives some great views of the city. The mountaintop is reachable by cable car, and is where I took the first photo on this page. If you’re lucky you can even see the northern lights from right here! There are several tours that take you outside of Tromso in order to get away from the city lights, but being this far north, they can be strong enough to be seen from downtown. 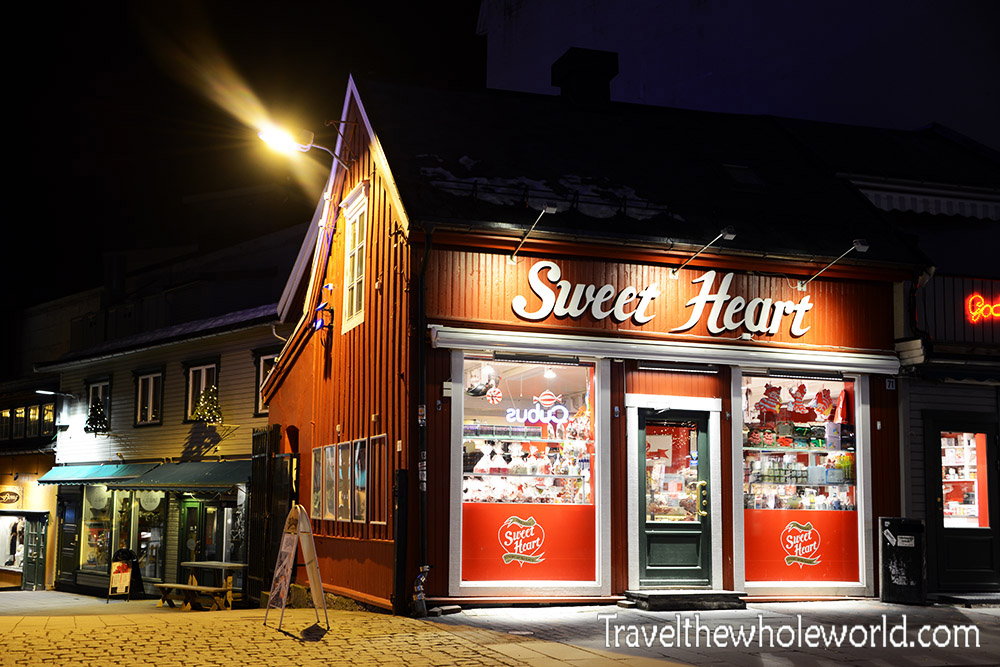 I visited Tromso just after the winter solstice, or the shortest day in the year. At 69 degrees north, the sun doesn’t even rise but instead gets close enough to the horizon to give a little bit of twilight. The photo I took of the mountain in southern Tromso is about as bright as it ever gets here during the middle of winter. These photos above and below might look like midnight, but they were actually taken at 3pm! It’s so dark out you kind of expect every store you approach to be closed, but everything is open and life goes on. 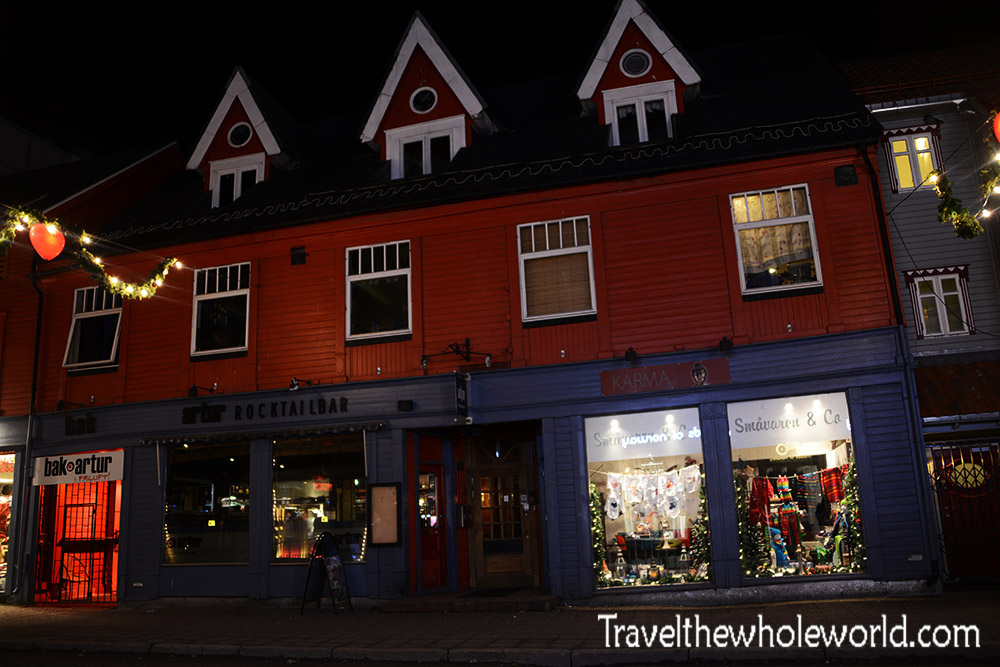 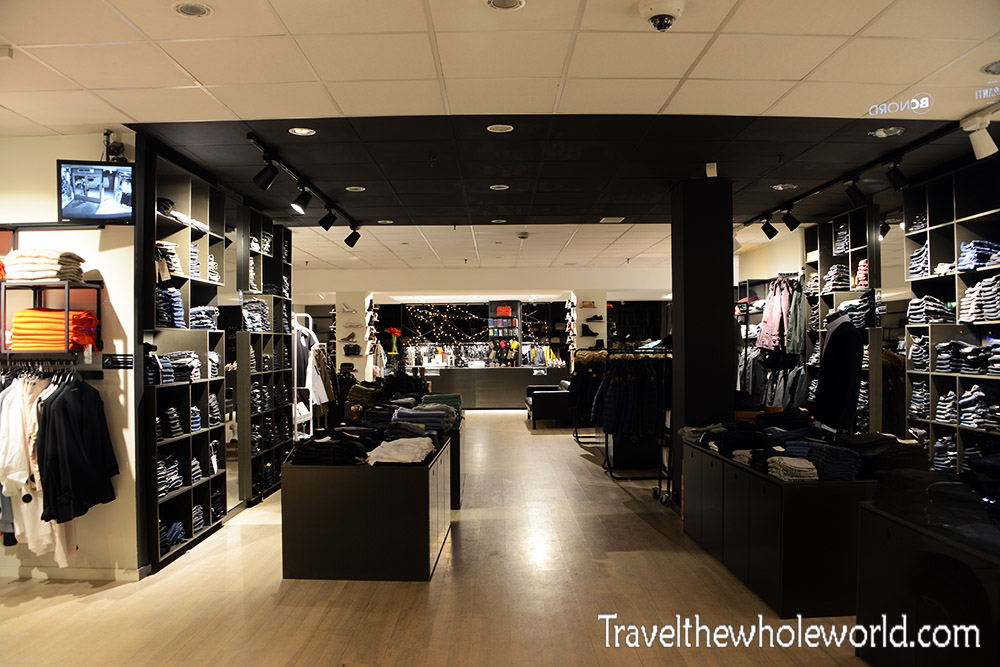 Despite being so deep into the arctic, once you’re inside the stores you feel like you’re in any other city. The main difference would be the pricing though. This wool sweater in the photo below tops $500! Of course that was on the more expensive side of the store, but good luck trying to find a single piece of clothing for less than $200 here. I recently met someone who told me that the Norwegian government was trying to fight such high prices up north, in order to encourage the population to stay. Apparently most are understandably trying to move south, and such extreme prices only encourage them. 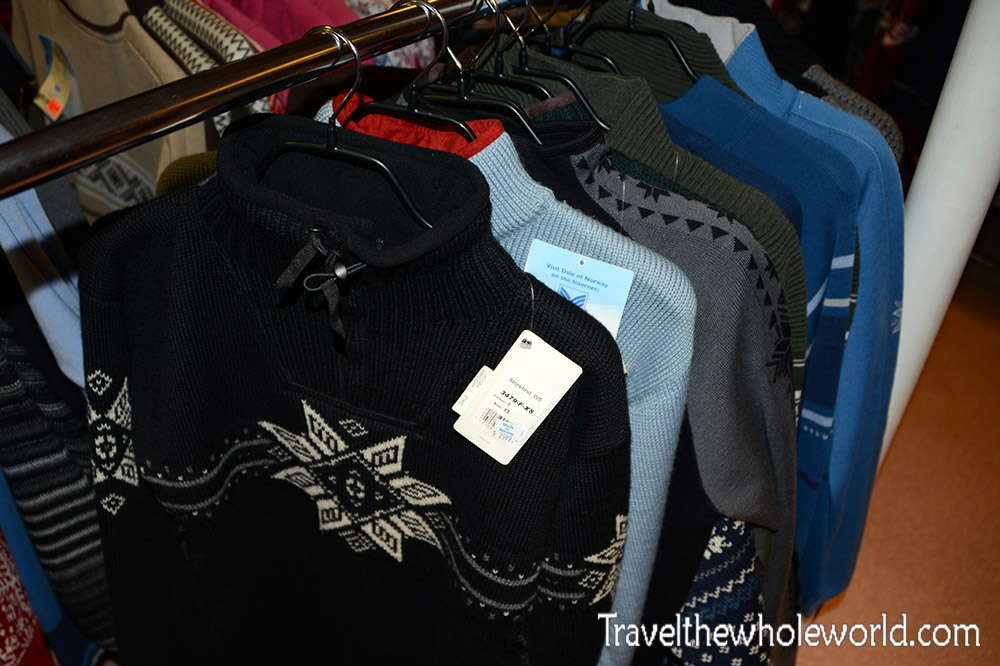 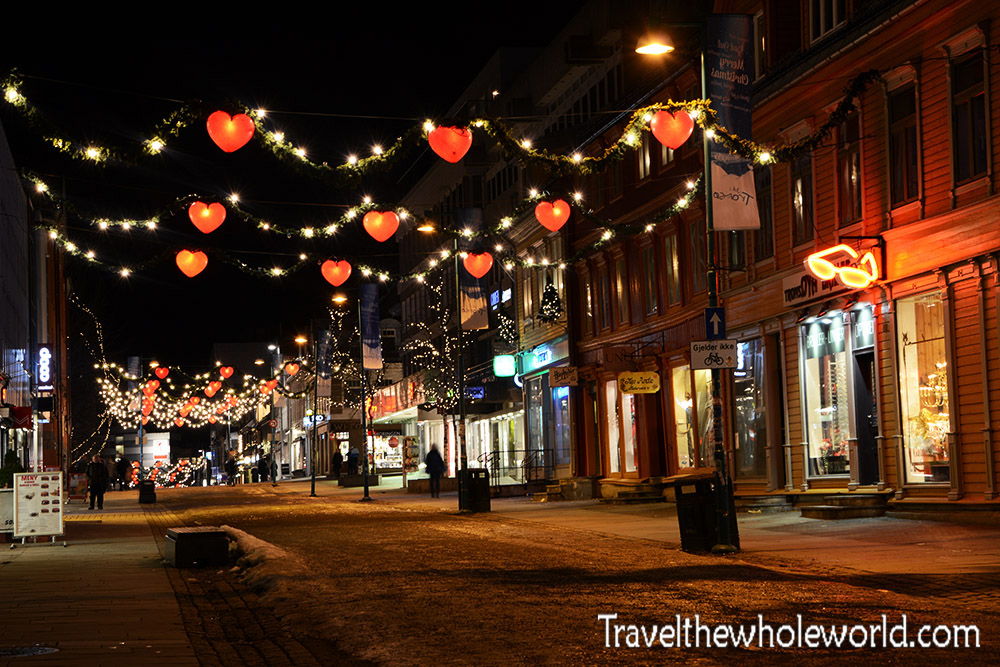 Here’s a photo of Tromo’s main street in the city center. You can see that they’ve done a little bit of festive decorations across the street, but I personally would have preferred more light. Since I was just visiting it was easy to handle darkness for a week before escaping back to southern Scandinavia. If i was a local though I’d definitely prefer some bright floodlights, even if only an hour a day, to make me feel like I get a short break from the night. 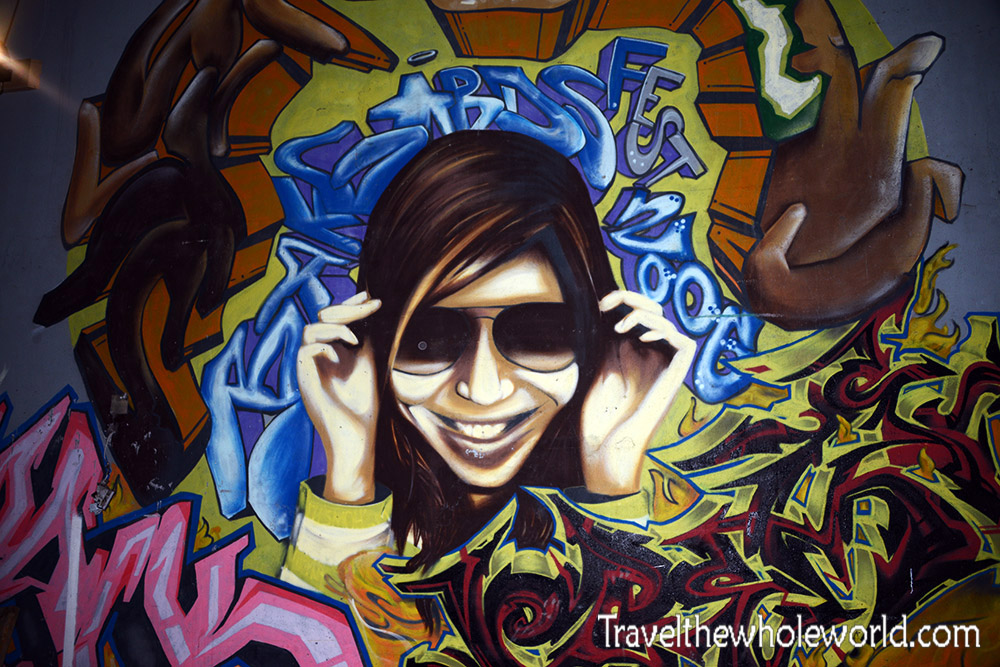 So I came across a few things that I didn’t expect to find in the arctic. One was this photo above showing some street graffiti. With a population of over 60,000 people, I suppose it’s not too far fetched to assume a few will be teenagers wanting to share their talents to the public. Something more surprising to me though was that I came across a few homeless people! I didn’t get their photo, but there they sat in the city center with signs I couldn’t read explaining their situation. It seemed impossible for a country like Norway to have homeless people, no less in a city in the arctic. 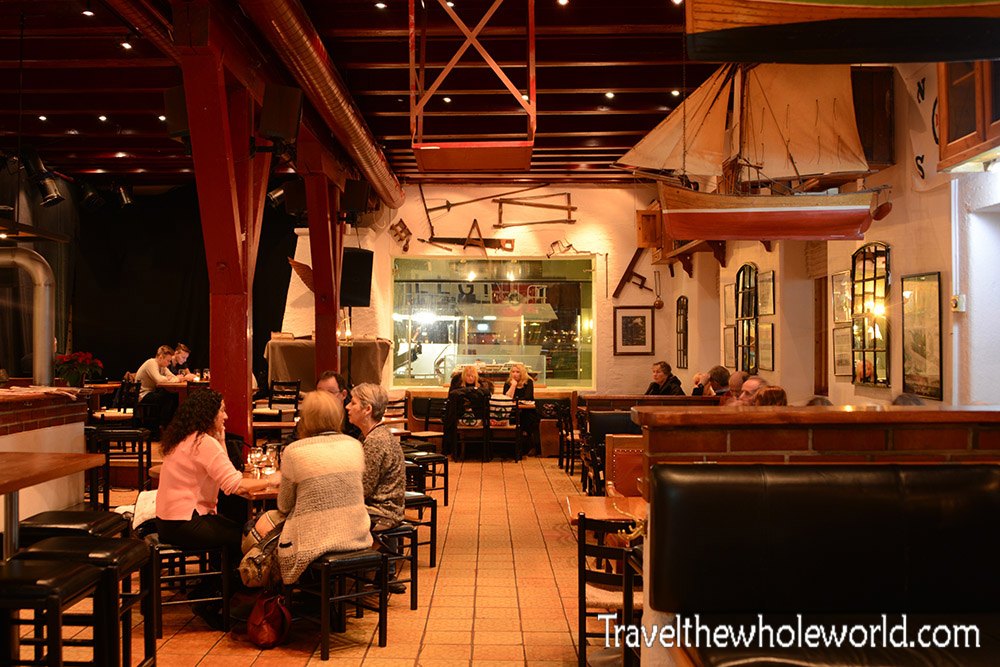 On the flip side of things, this is such an expensive city that maybe it’s not so far fetched to have a few homeless people. This is a nice restaurant I photographed, but I didn’t eat here since it cost about $50 for lunch. The cheapest restaurant that I could find charged $35 for a single hamburger without a drink! I often tell people how expensive Norway is and sometimes they respond that Germany, the UK, the Netherlands etc are also very expensive. I’ve been to all those places and I can promise you that eating in those countries is practically free compared to Norway. I’ve had meals at small restaurants in those other countries for as little as $7 or $8, while this $35 hamburger was the absolute cheapest I could find. The only cheaper place would be fast food. There’s a Burger King in Tromso that I didn’t eat at, but even a simple whopper combo costs about $25. Remember $25 is the absolute cheapest meal you could get. To put things in perspective, since the average meal is $40 here, it would cost a family of four $480 a day to give them each breakfast, lunch, and dinner! 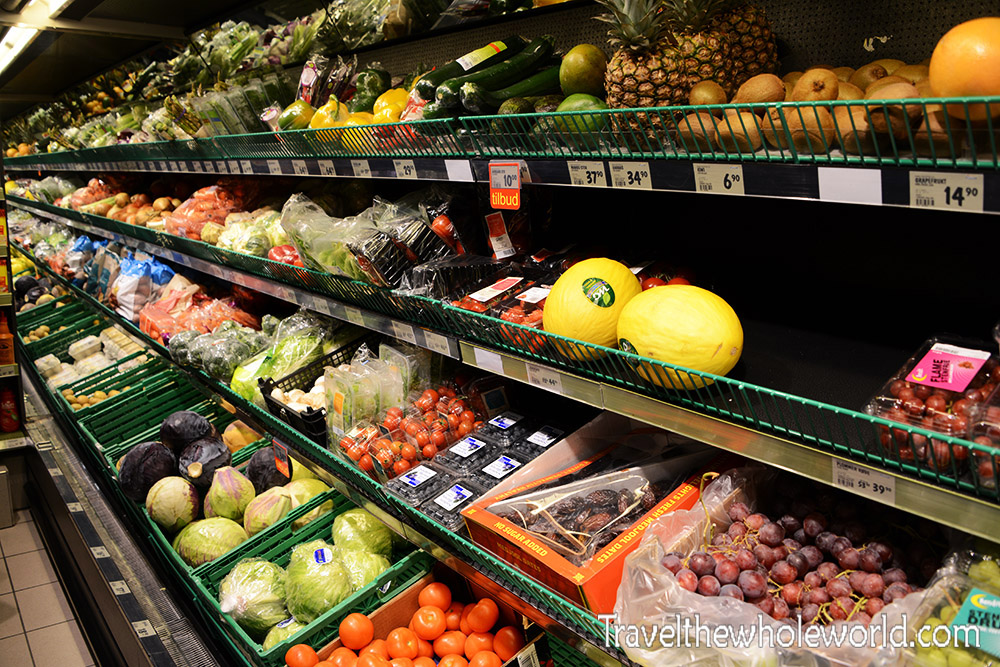 Okay so clearly I’m going on a rant here, but the food was so expensive in Tromso that I actually had to go to the grocery store and 7-11 for dinner. A two liter of coke back in the US would probably cost about 99 cents, these were about $5 and only 1.5 liters. I was able to find enough food here without going broke, but this was more than I had spent on meals in my entire life, and I can’t deny it removed some of the happiness. It’s kind of the same feeling when you show up to a new country and realize you’ve just ripped off by a street vendor. 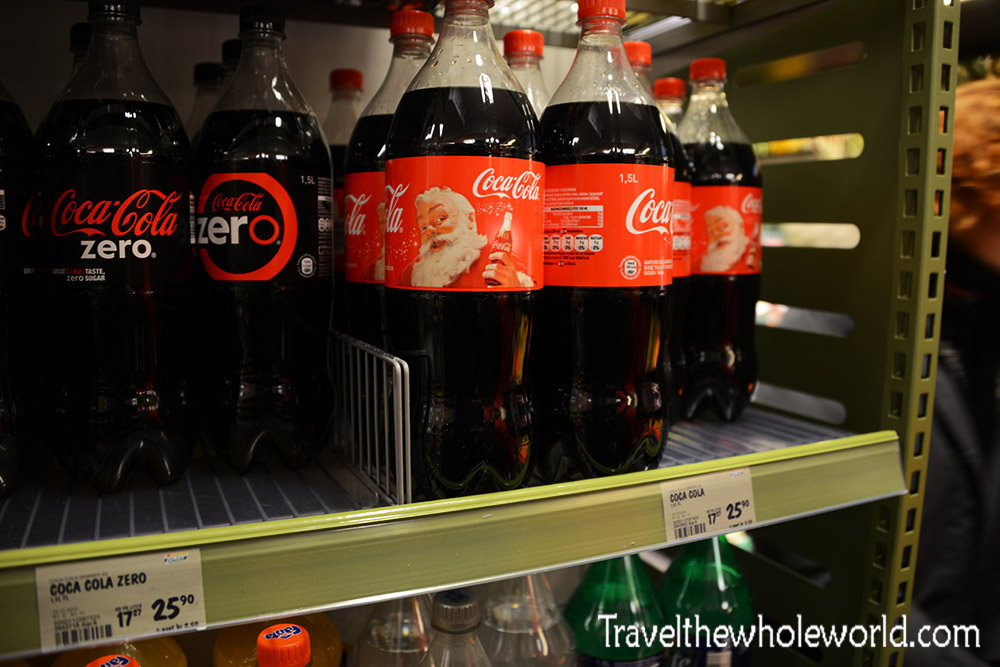 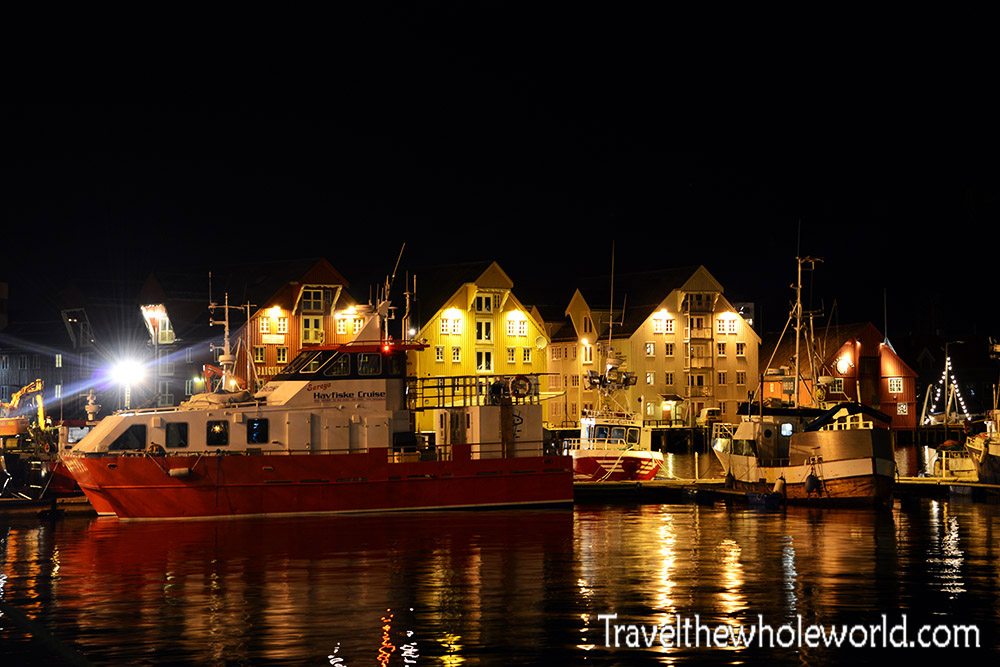 Now that I let off some steam with how expensive things are in Tromso I can move on! Luckily my favorite activity is usually walking around and exploring new places, which is always free. I’m sure that Tromso must look like a completely different city in the spring or summer, but during the winter time I found the harbor was one of my favorite places. It was a bit more lit up than other parts of the city, and even at night I could make out some beautiful views of the fjords. 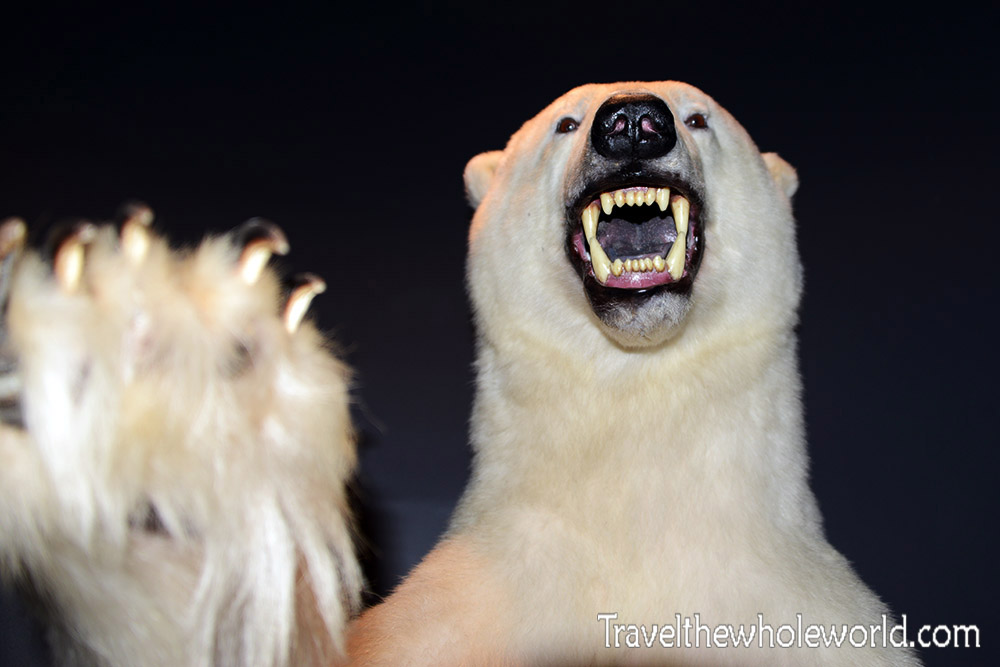 A popular question regarding walking around Tromso is, are there polar bears here? Polar bears live all over the arctic, and once outside the city there is a risk of an encounter, but they never venture into Tromso itself. So the short answer is no, unless you want to count this famous stuff bear that’s inside the lobby of the Radisson Blu Hotel! 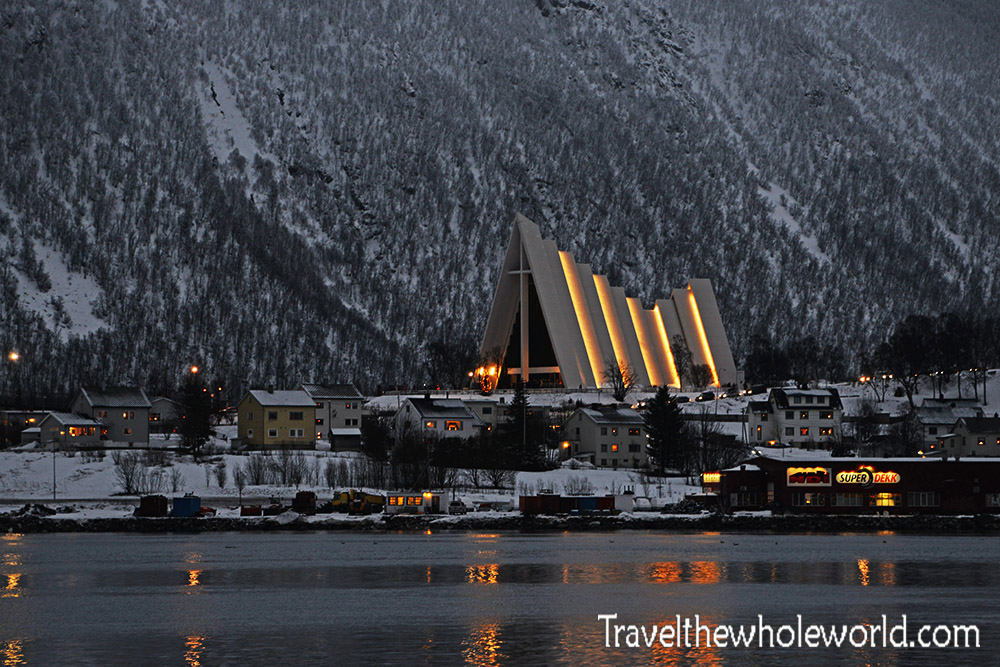 Another known icon of the city that’s just across the harbor is the famous Arctic Cathedral. The cathedral isn’t in the city center, but actually located in a suburb called Tromsdalen. Although it’s actually a church, it’s commonly called the Arctic Cathedral by locals and travelers alike. Built in 1965, it’s relatively new but became famous for its unique architecture and large stained glass windows. I noticed a skull had been made into the stained glass which is photographed below. 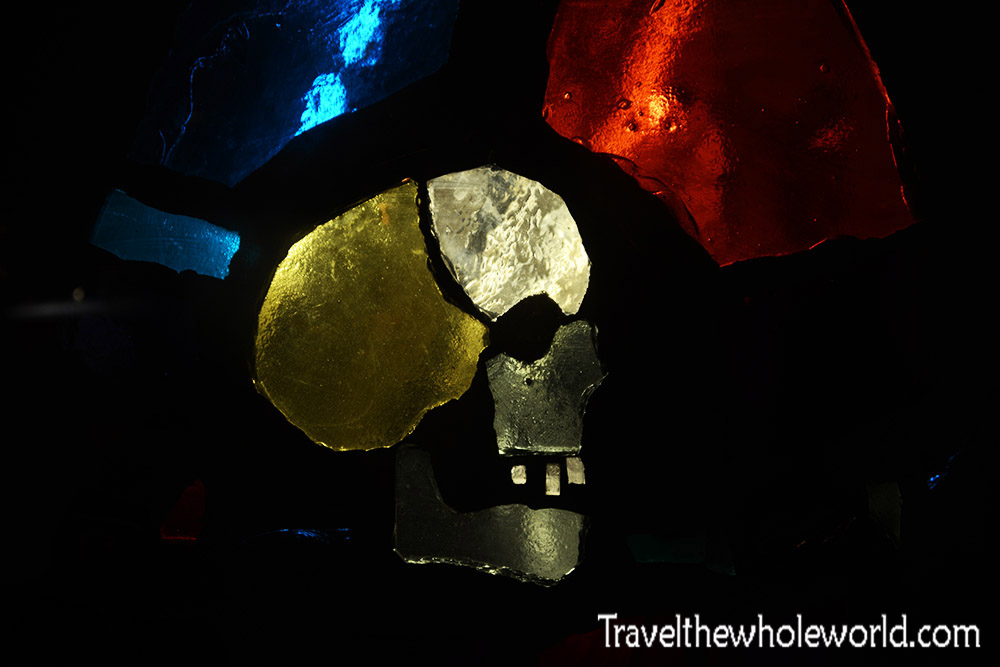 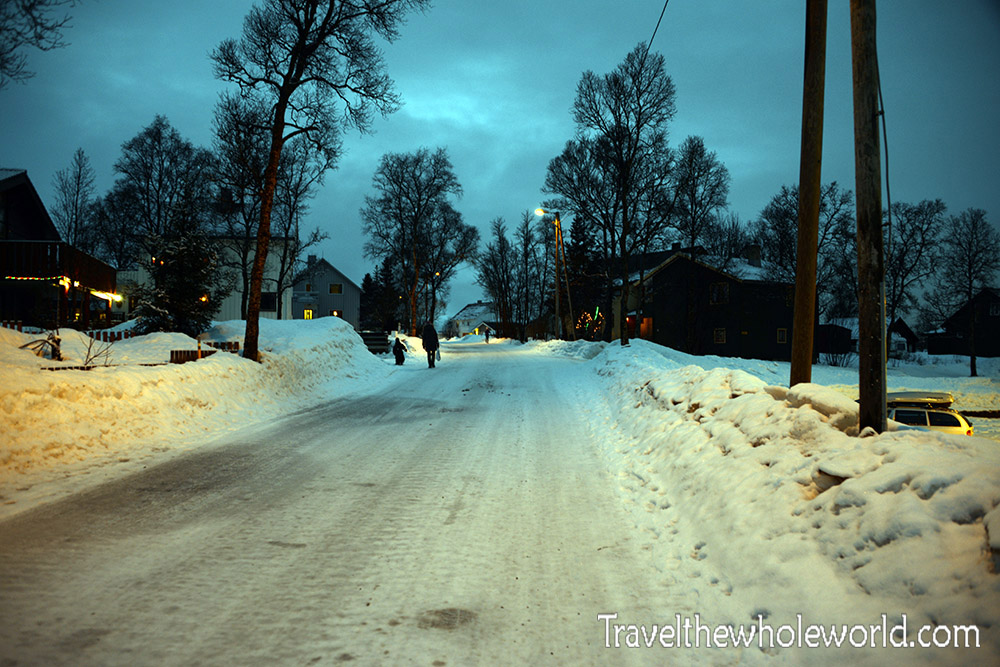 On the way to the Arctic Cathedral, I had walked across the Tromso Bridge into the Tromsdalen neighborhood seen above. This is the neighborhood is where you can find the cable car ride that takes you up over 1,400 feet (400 meters) above the city. I came here during midday where there is as much light as you’ll ever see in the winter time. In the photo above, half as much snow as that would shut down Washington DC and northern Virginia where I live, but here it’s the expectation for a few months. In the photo below, you can see an expensive home in Tromso. 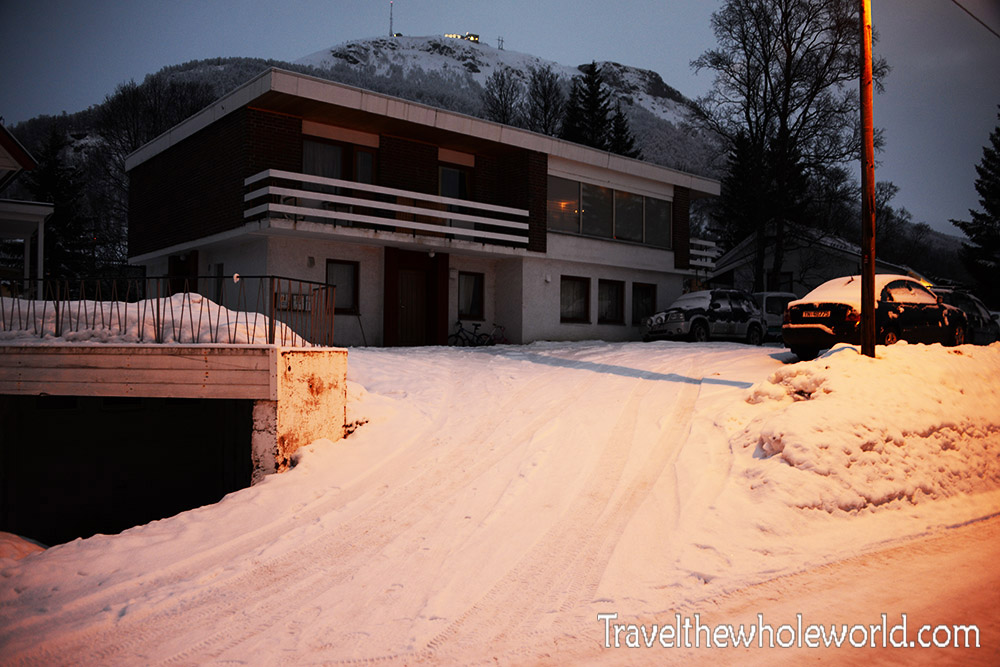 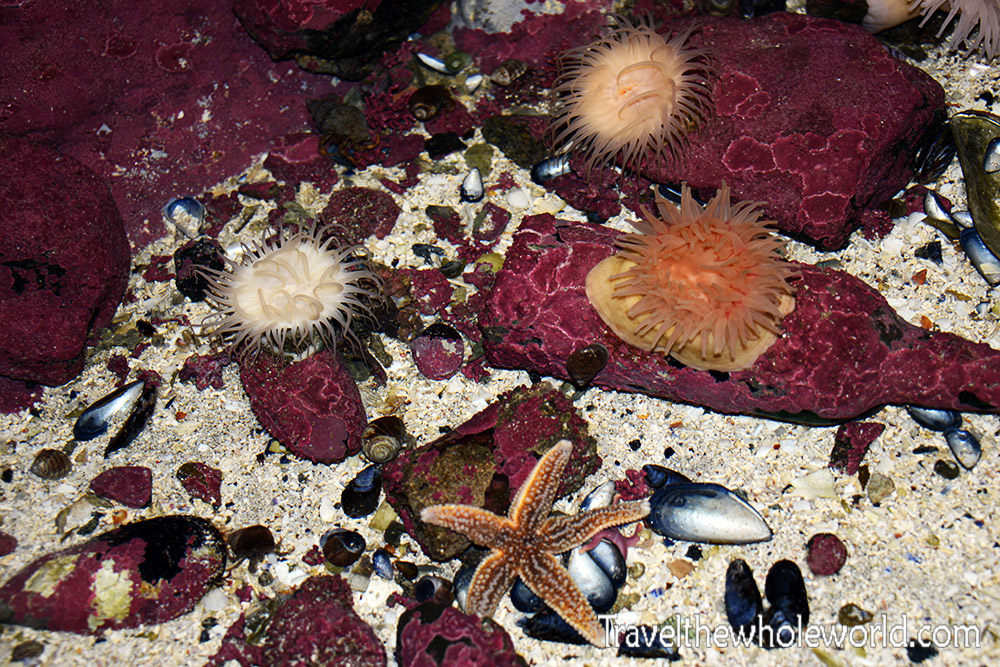 After the mountaintop, the next best thing to do in Tromso in my opinion is to visit the Polaria museum & aquarium. This is a great place that has lots of information on the Norwegian arctic, northern lights, local wildlife, and even the Norwegian island of Svalbard which is much farther north than Tromso. You might think the ocean floor in the arctic is pretty boring, but some things like these urchins and starfish are actually quite colorful! 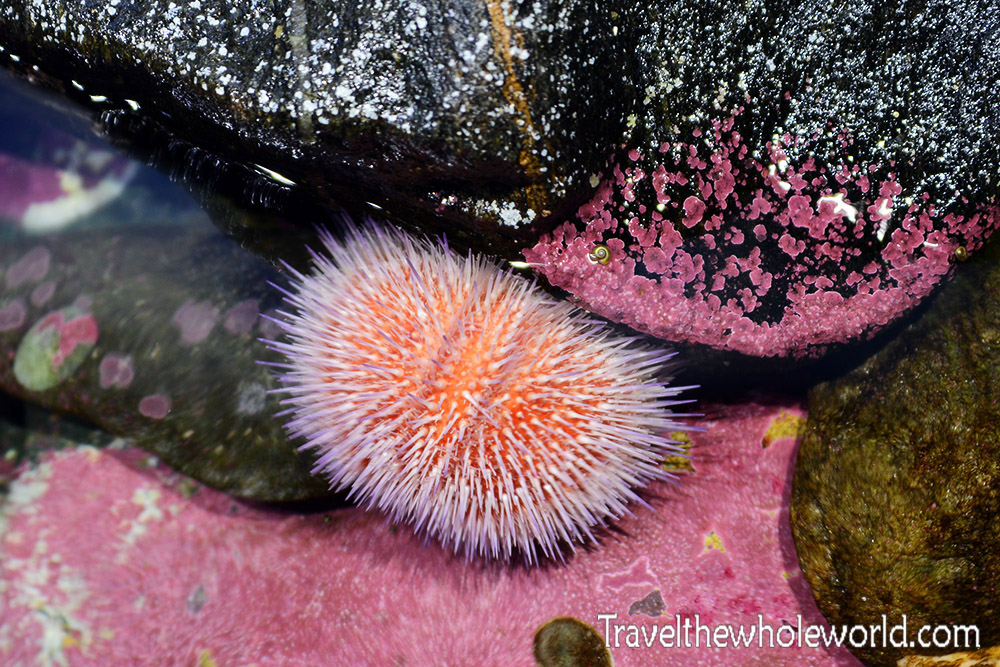 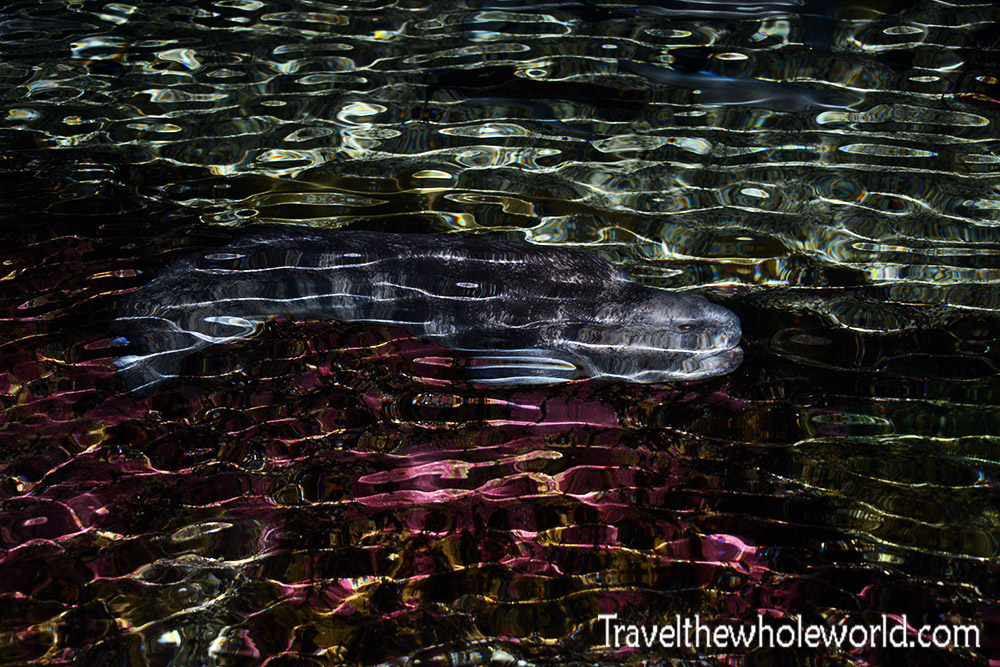 Well at least the invertebrates were colorful, most of the fish I saw were a boring shade of gray. This one above was probably the largest one that I saw in the aquarium, but hard to photograph since I was peering in over open water. The one below was in a tank and easier to see the detail. This guy looked more like a rock with fins on it to me! 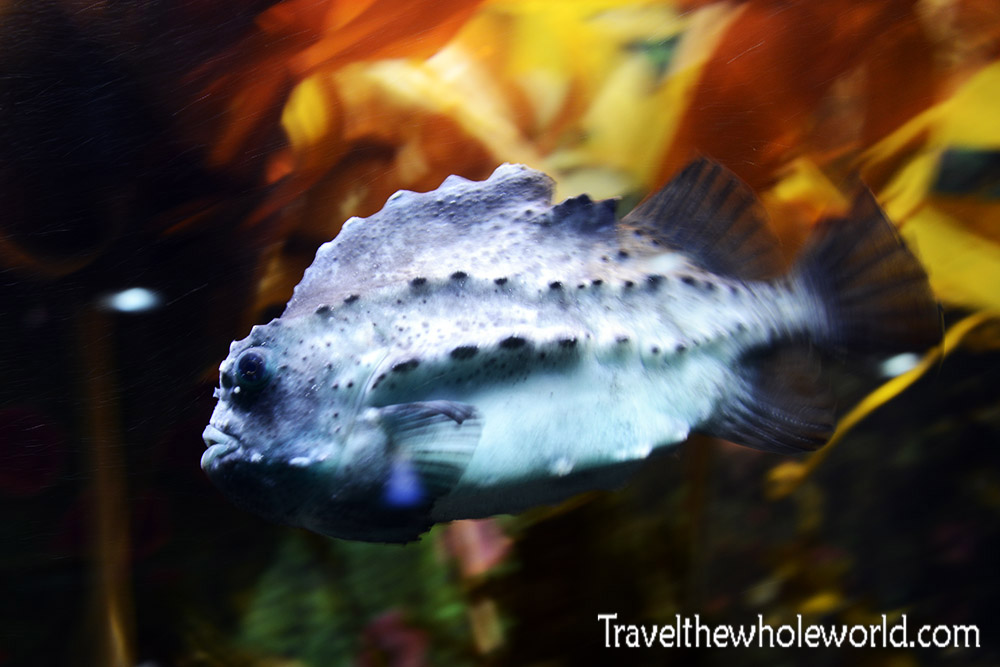 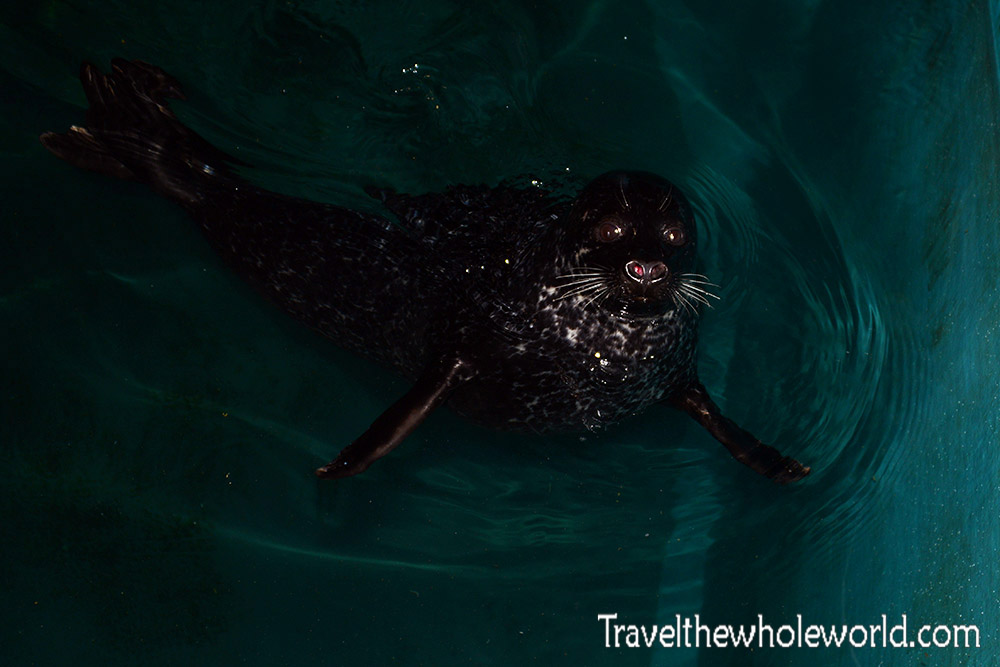 And finally Polaria’s most prized possession, their open pool that is the home of bearded seals. At 1 pm everyday, they feed the seals for the public to watch. I missed the feeding since I chose to be outside during the brief twilight but was more than happy with my experience when I came later in the day. Of course the bearded seal is only found in the arctic, but it’s the most common seal seen in Norway’s fjords. 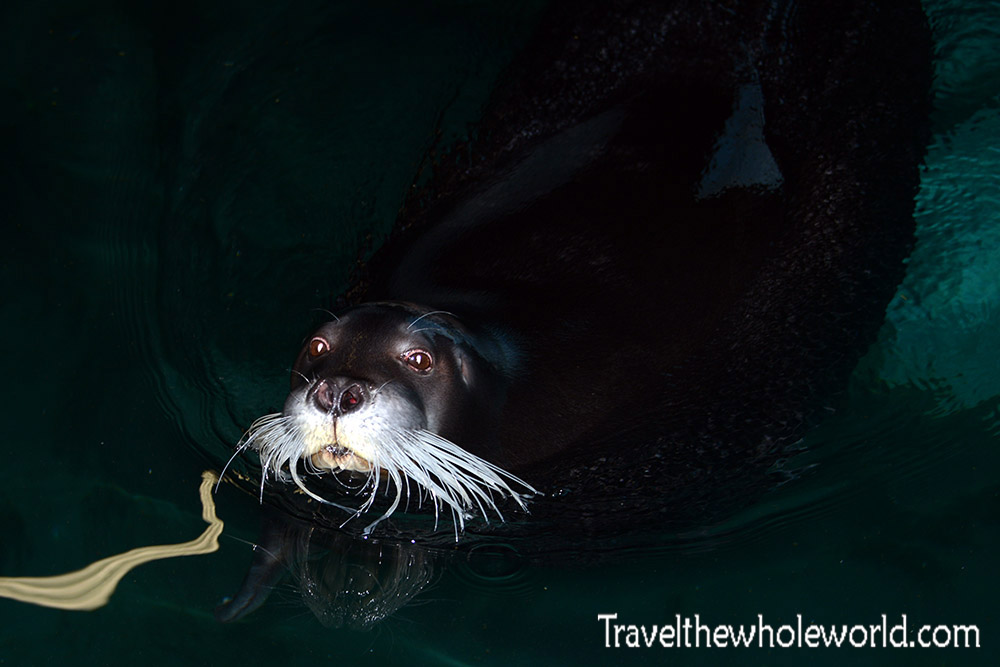