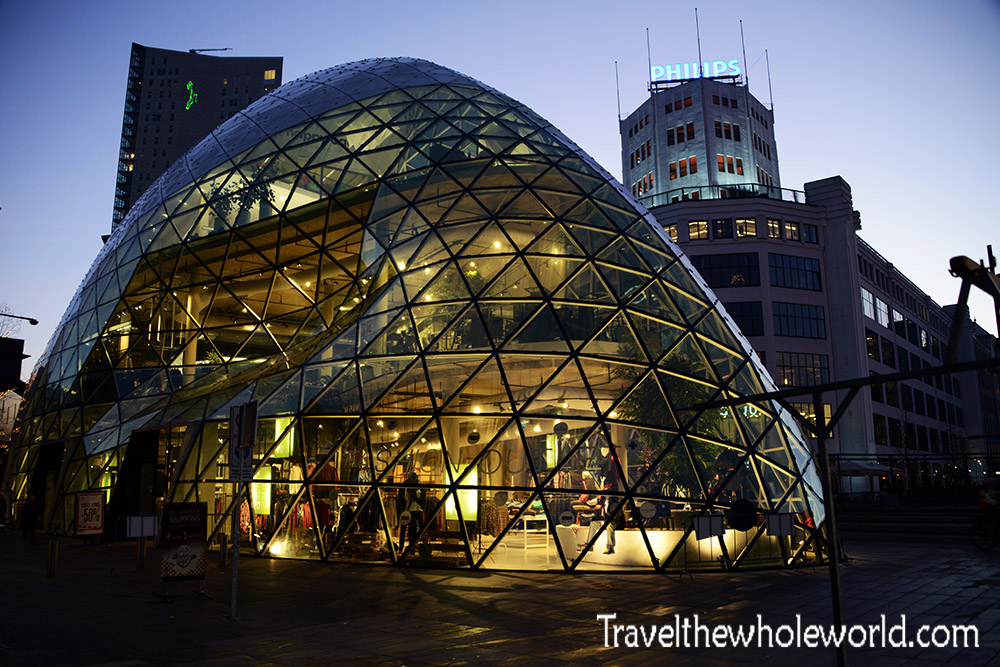 Eindhoven is the Netherland’s 5th largest city located close to the border of Belgium. I’ve visited several times on rare business trips, so I’ve gotten to experience the city more than most places I go to. Eindhoven’s economy is largely based on the tech industry. As a city with some of the most high tech companies in the world, Eindhoven expresses this with some impressive architecture and futuristic looking buildings. The building above is actually just a clothing store in the city center! 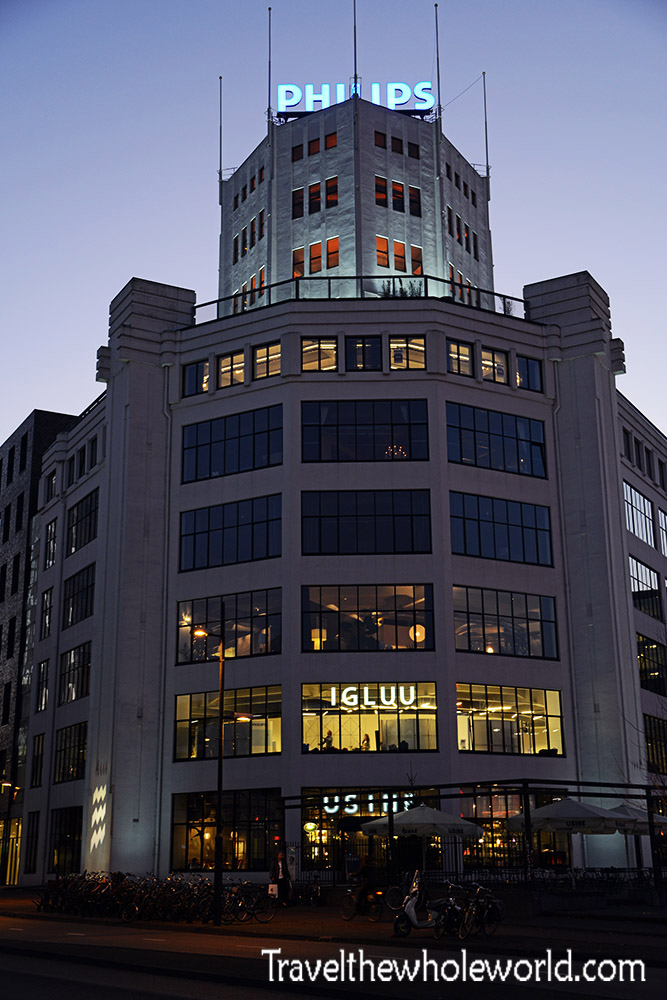 Eindhoven has been the center of technology in the Netherlands for over a 100 years. The famous company Philips for example, has existed since 1891! As a matter of fact, the reason why I was in Eindhoven was because my company had purchased a large division that once belonged to Philips. We kept the technology and people in Europe so I had to come occasionally for business purposes. In the photo below you can see the Evoluon building built by Philips in 1966. The Evoluon building was originally a unique science museum, but after losing money for sometime they decided to convert it to a conference center. 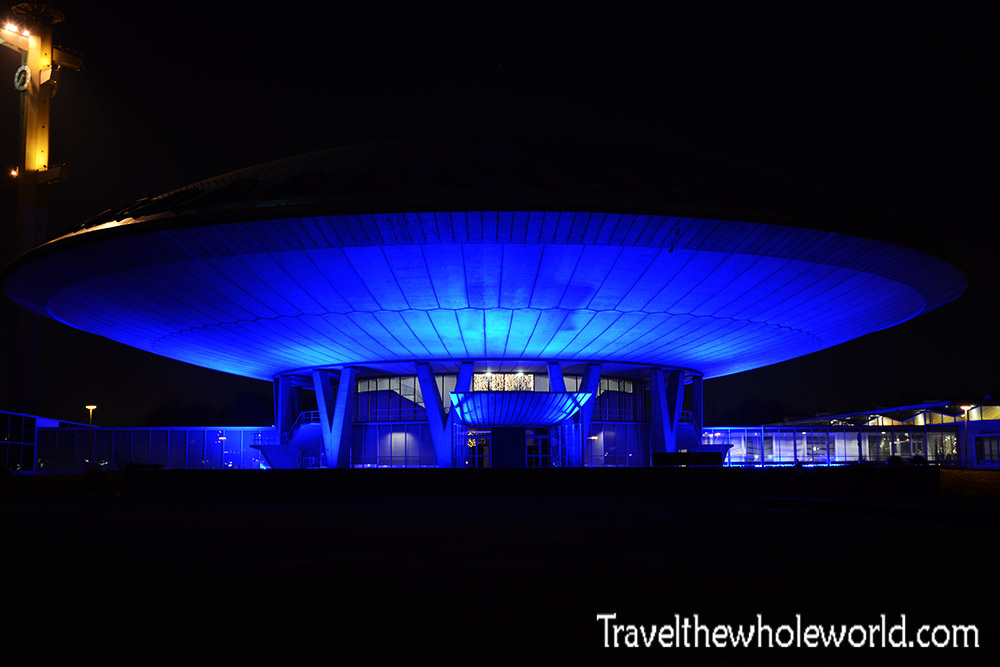 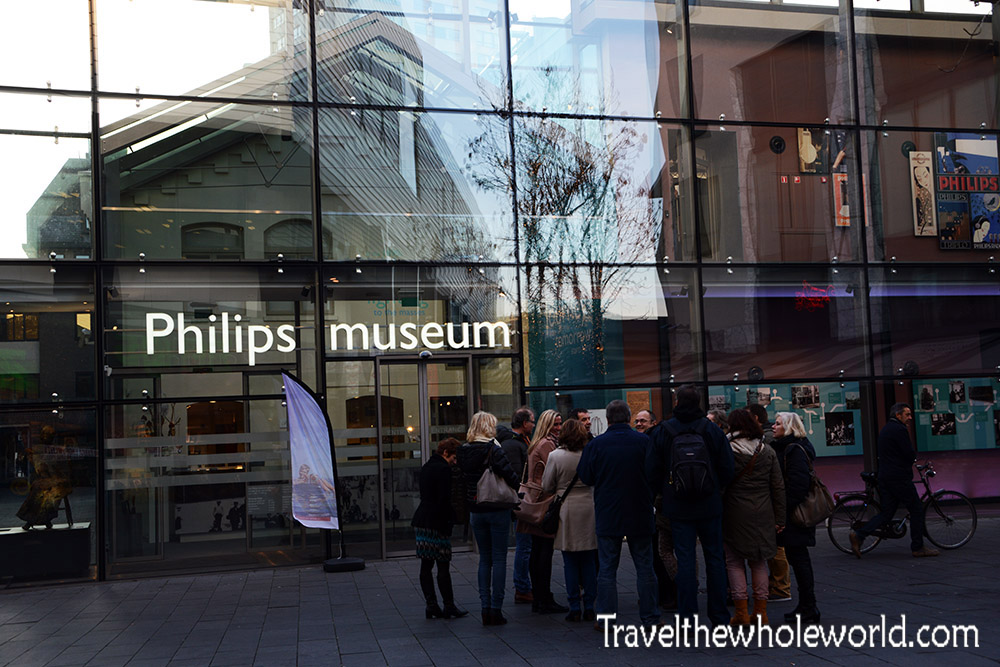 For people visiting Eindhoven there are a few things to do in the city. Even though Eindhoven is the fifth largest city in the country it had more of a small town feel to me. There are only a few high rise buildings, and unfortunately things close pretty early here! There was a Philips museum that I had wanted to visit, especially since my current job is based off one of their previous divisions. All their museums close at 5pm, and since I was always working during the day I never had a chance to visit any of them. If you think closing at 5pm is bad, there is an open air museum here that remains closed from October through March! The photo above shows the Philips museum and the Van Abbemuseum below, neither of which I was able to visit! 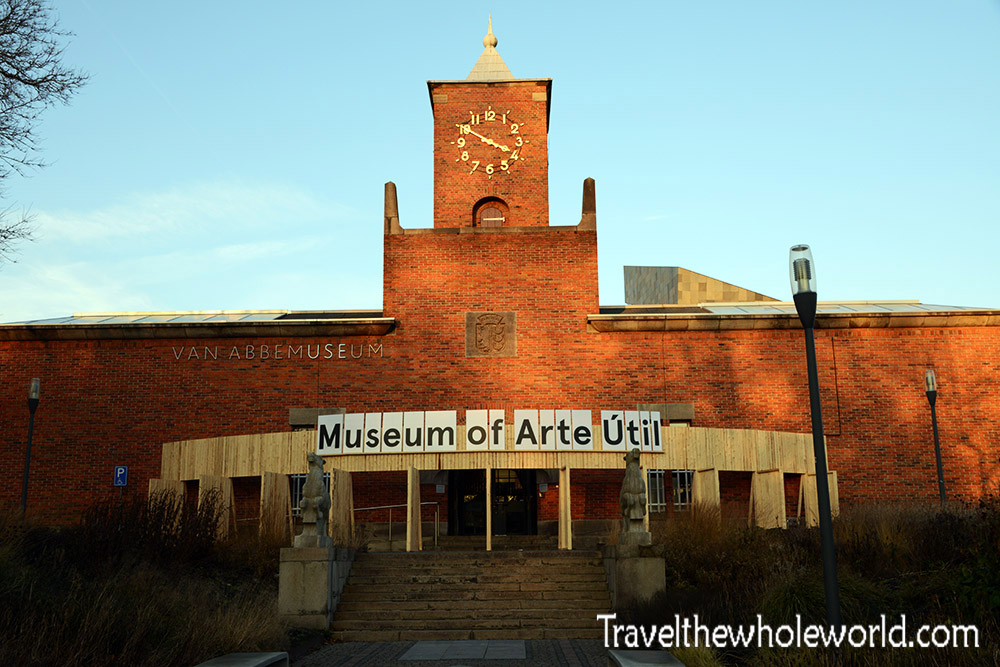 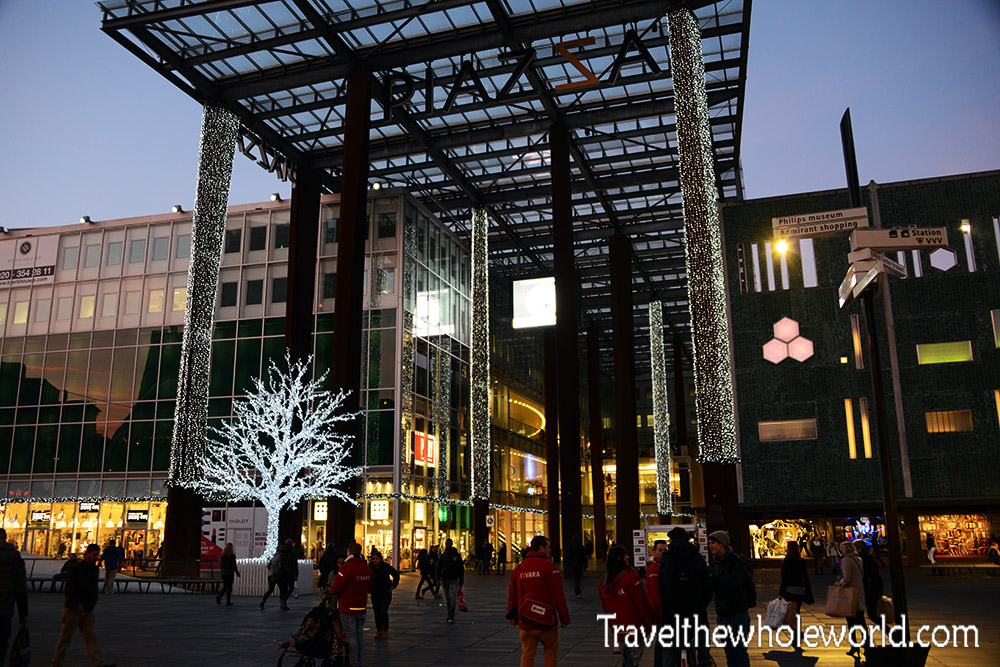 Like the museums, most of the stores close early here as well, around 6pm. Restaurants are open a bit late and I believe there is even a 24 hour McDonald’s here. The photo above and below show the main shopping districts in central Eindhoven. The streets can actually get fairly crowded but once 7pm hits they are mostly empty. 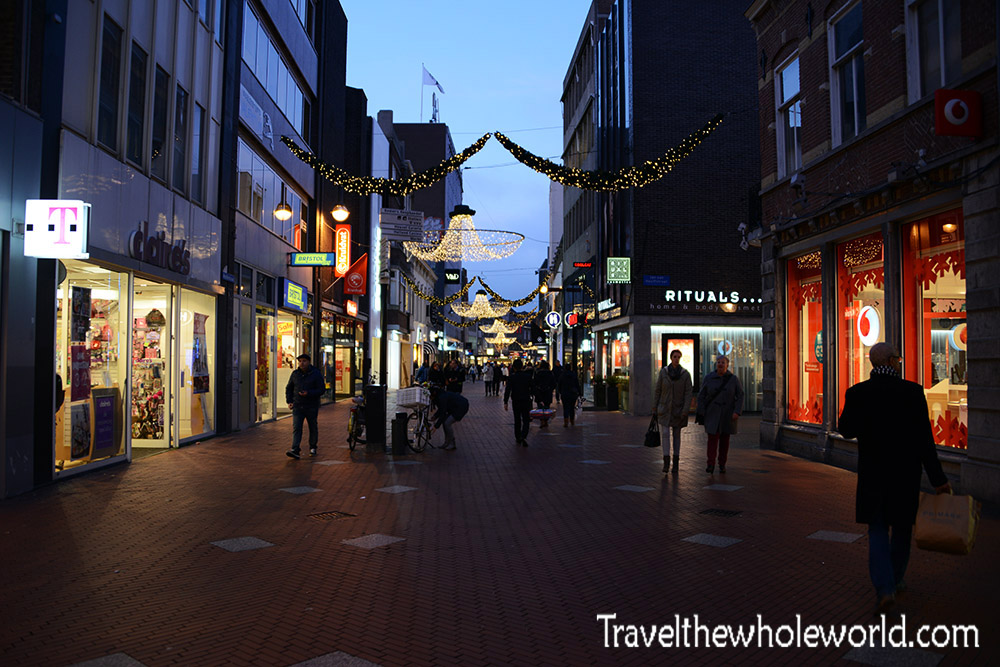 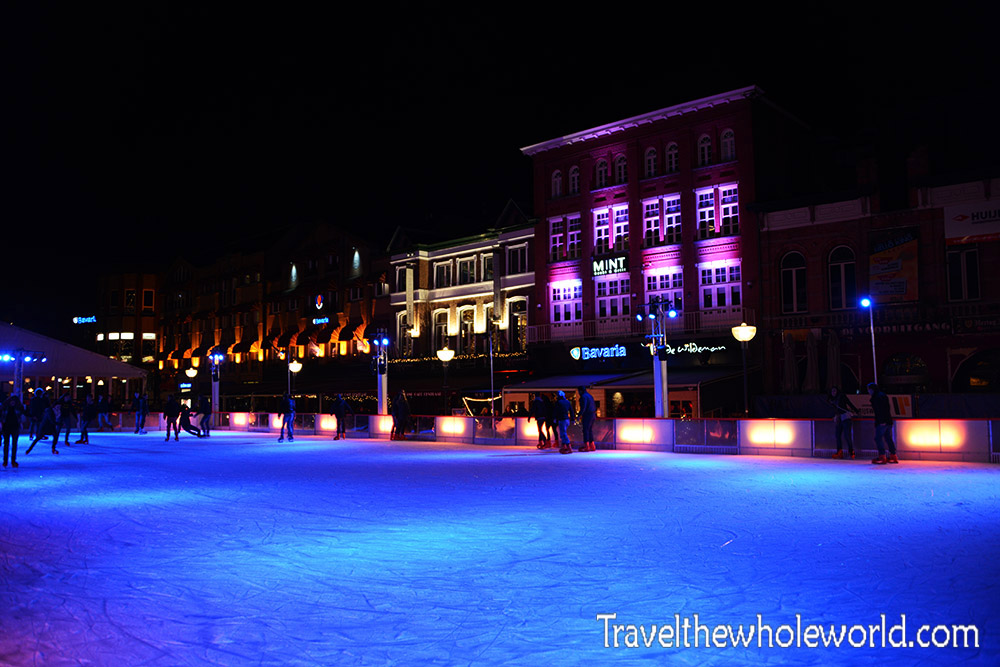 I came to Eindhoven several times, but the first two were both during the winter. With it getting dark so early most of my shots on this page are night shots. During one of my winter visits, Eindhoven’s central square was turned into an ice skating rink. 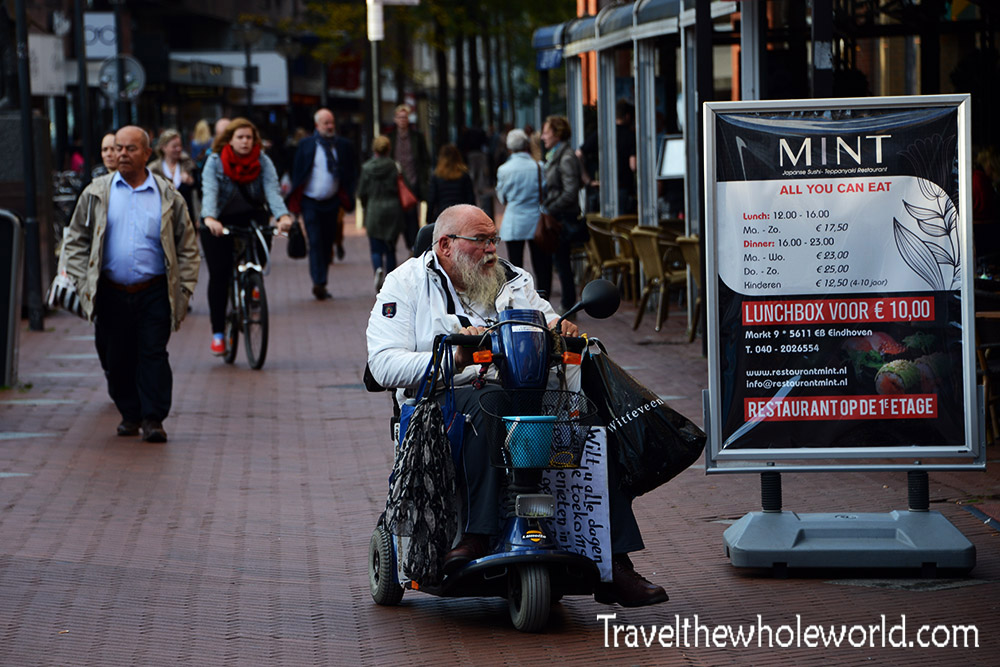 Nearly all the times I came to Eindhoven this preacher guy was present in the central square. I got this photo of him above attempting to escape after one of his talks. Because of the language barrier I’m not exactly sure what he was preaching about. Since I saw him here in all seasons, he was clearly very passionate about his message. He used signs and a megaphone while he drove around in central square. 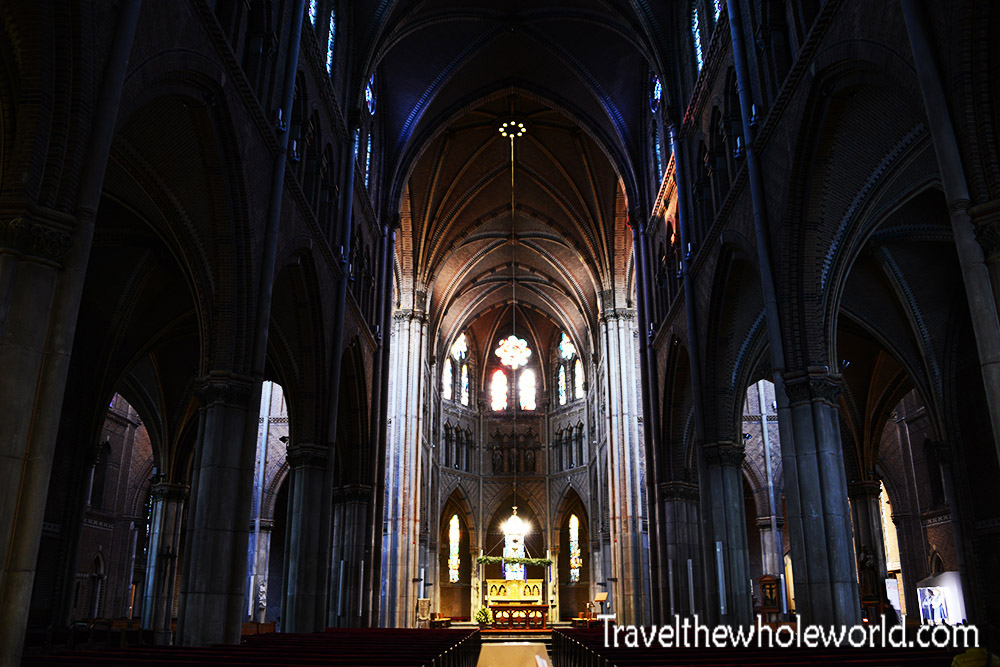 Just a block away from the central square is the most famous church in Eindhoven; Sint-Catharinakerk Cathedral. From what I understand, the cathedral has been attacked many times throughout its history during various wars. It was first was destroyed in 1486 CE and most recently heavily damaged in World War II with plenty of attacks in between. I was told by a local that the towers were destroyed by Nazi Germany while the rest of the cathedral remained relatively intact. 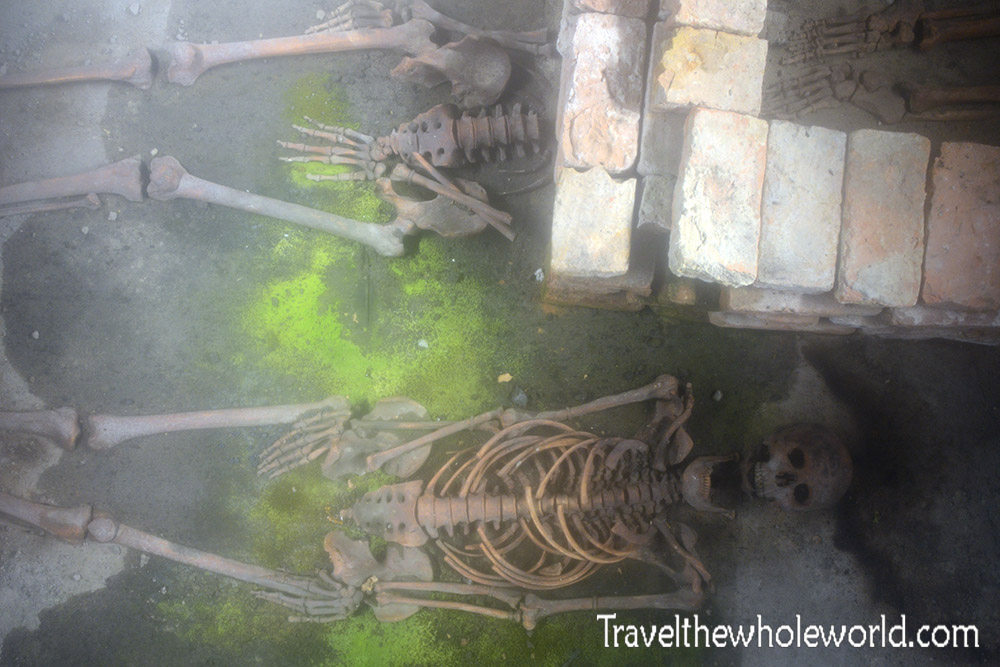 Maybe most known about the cathedral is their public display of some of the medieval bodies. The current cathedral was built in 1867 because the previous church was simply too small. The entire old church was demolished, and some of the dead were relocated to the front of the cathedral with clear viewing tiles placed over them. There are only about ten skeletons in view, including a baby in the photo below. 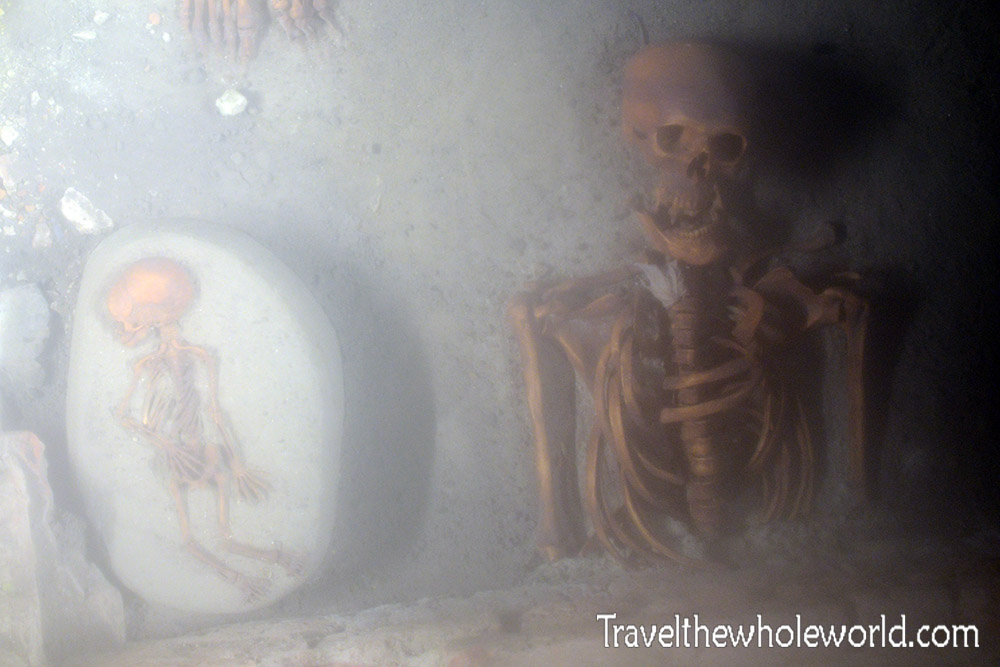 While we’re being morbid I’ll explain this photo above of this dead rabbit. It’s obviously a strange thing I encountered and like all my random experiences, I share them on my website. So the story is I came to work in Eindhoven for a two week period and came across this dead rabbit in a box. If the rabbit was just on the side of the road I’d assume it got hit by a car, but the whole being placed inside a box part made this pretty odd. I ended up taking a photo of it with my cell phone and didn’t think much of it after that. Now the crazy part is I returned to Eindhoven over six months later and was again walking on the same sidewalk. The box was long decomposed but somehow the remains of the rabbit were still there half a year later… 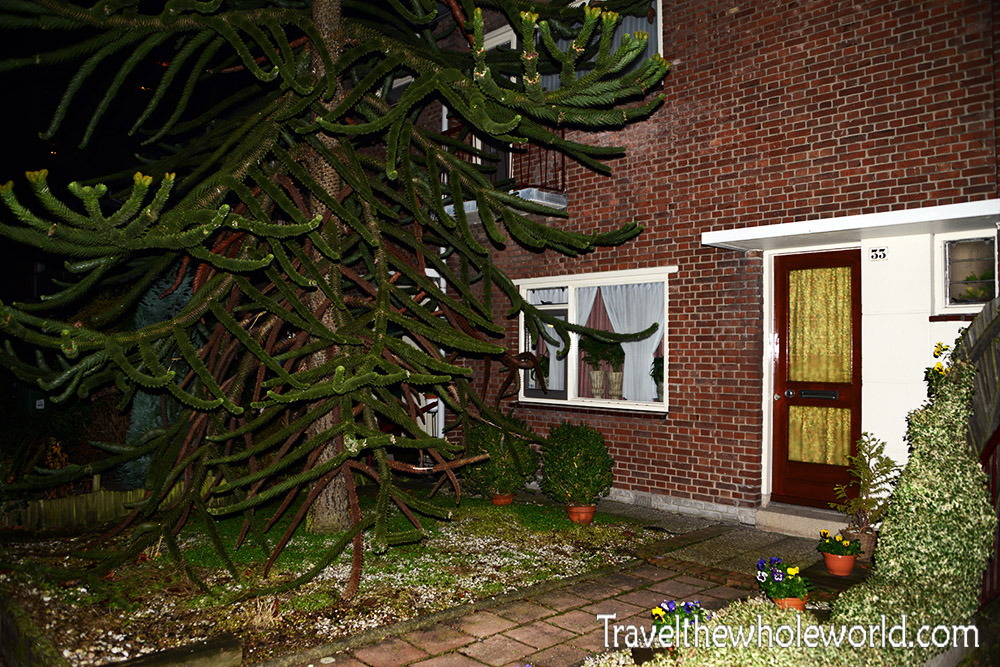 I did lots of long walks while in Eindhoven, and the rabbit was the only really strange thing I came across. I did find one of the neighborhoods to be lacking a bit of privacy. There was absolutely no gap between the sidewalk and the sides of people’s home. I don’t think in the United States anyone would ever accept that. The house above has a bit of a yard and even a tree separating it from the sidewalk. 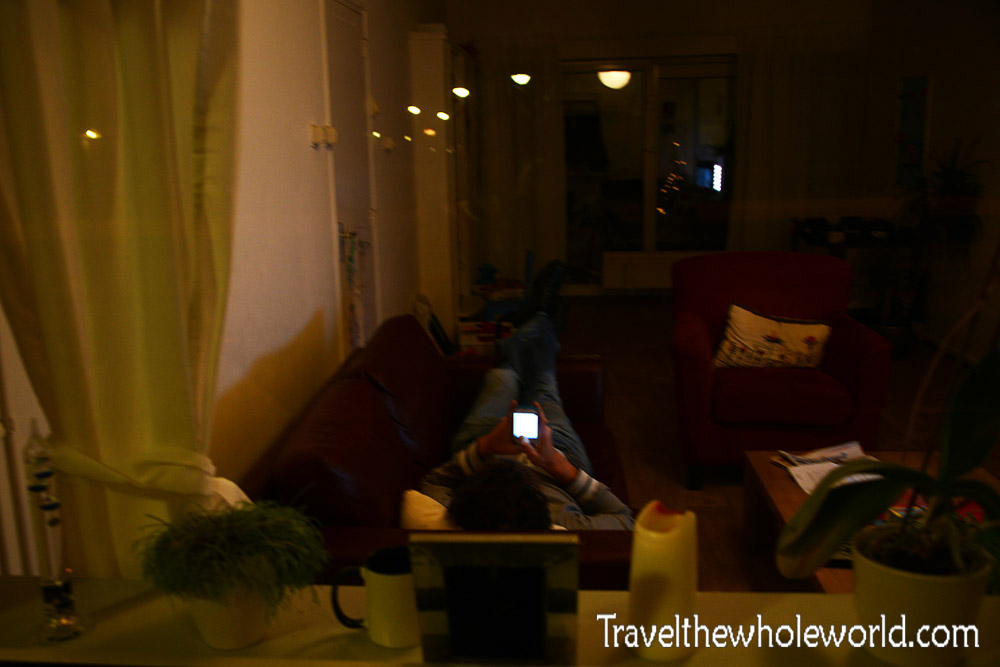 In this photo someone is texting on their couch andwas seriously just a few feet or a meter away from me outside. Most of the houses had their curtains open and people were watching TV or eating dinner while people passed arms length away. I definitely felt creepy taking the photo, but I couldn’t get over how people were fine with the lack of privacy in their homes! Some of them I could have shaken their hand from the sidewalk if there hadn’t been a window in the way. 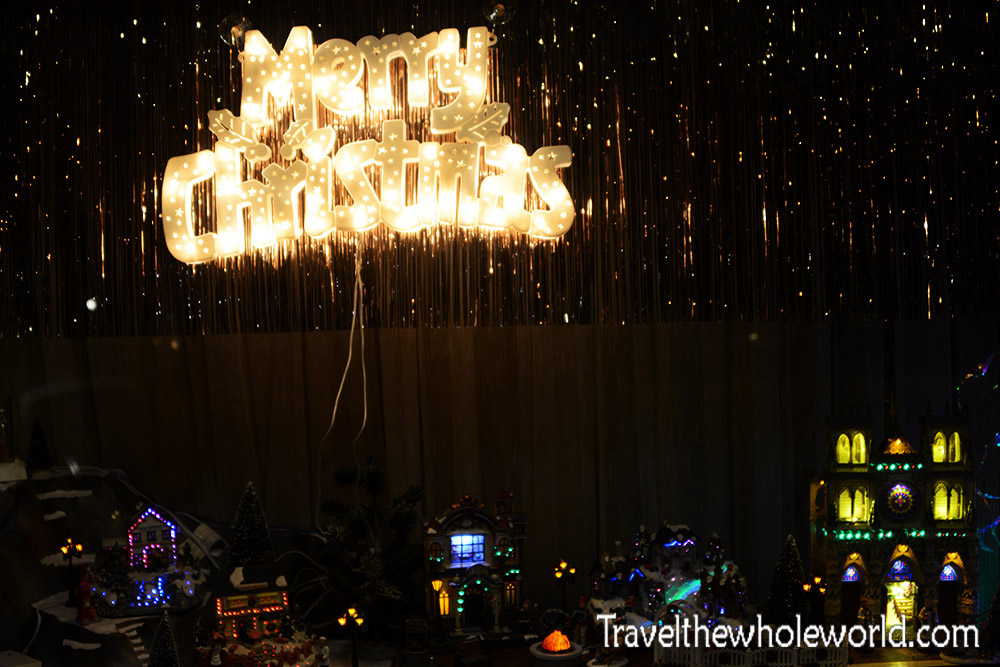 At the time I took the pictures from this neighborhood it was December. I saw lots of Christmas decorations and a few trees here and there. Not too much different from a December back home in Virginia. I walked far enough that I saw signs for cars pointing out the direction for Eindhoven. Luckily I had my tripod on me, and took this photo below of the full moon. 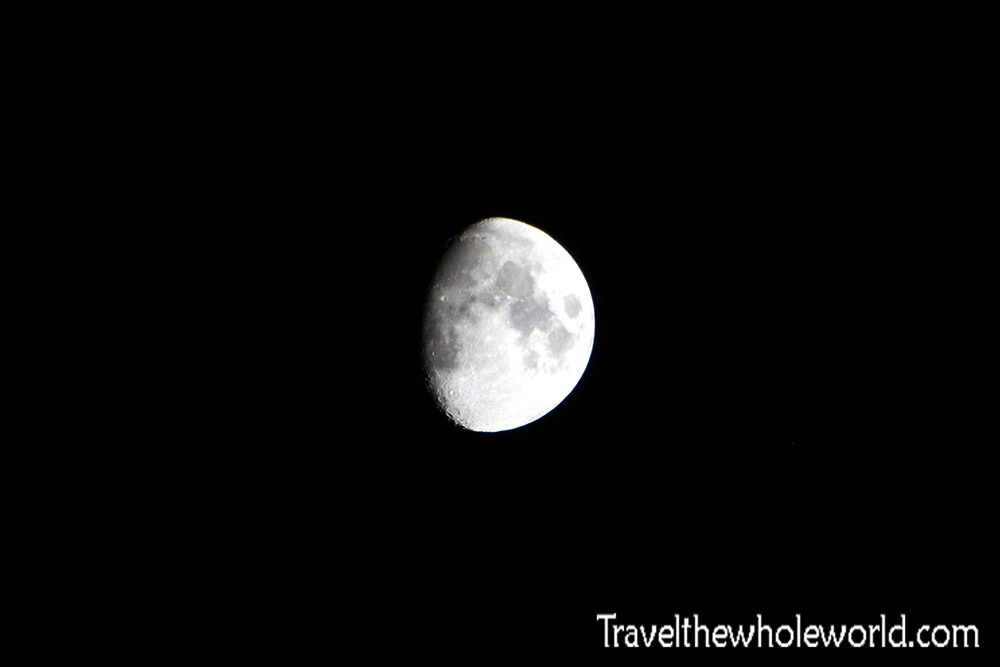 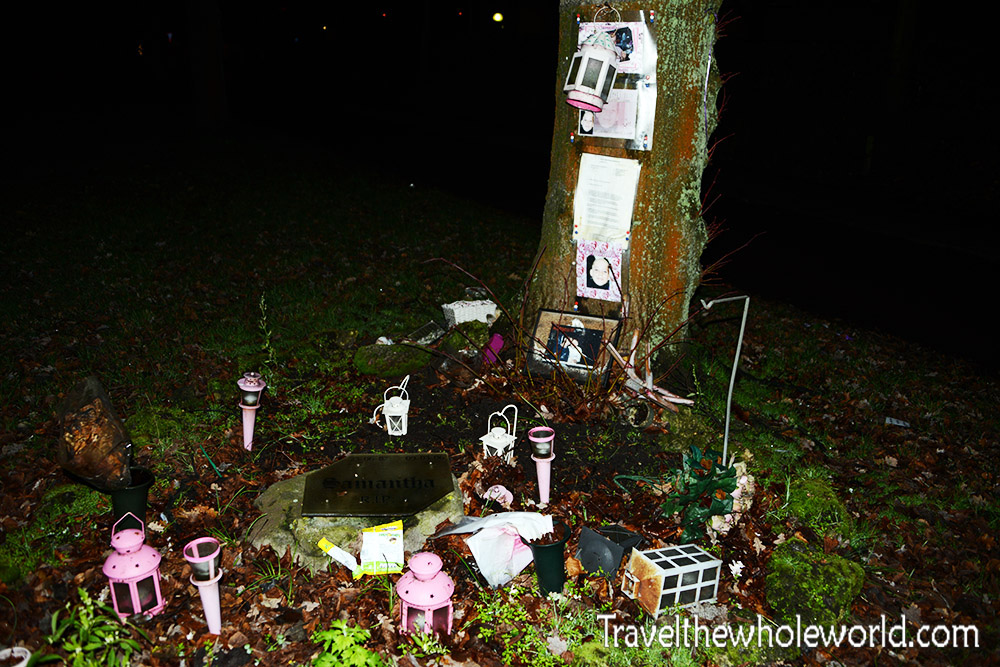 While walking through the city I saw a car speeding towards a red light at a street I was about to cross. Because of his speed it seemed he wouldn’t stop so I waited even though I had the right of way. The car sped through the red light and I was surprised to see it was a police officer. A few blocks earlier I had seen this memorial at a crossing for a young woman who had lost her life. Because I can’t speak Dutch I don’t know the circumstances, but most likely I imagine she lost her life while crossing the street on foot or on a bike. I have a friend in Eindhoven who also lost someone close who was killed while walking by a drunk driver. 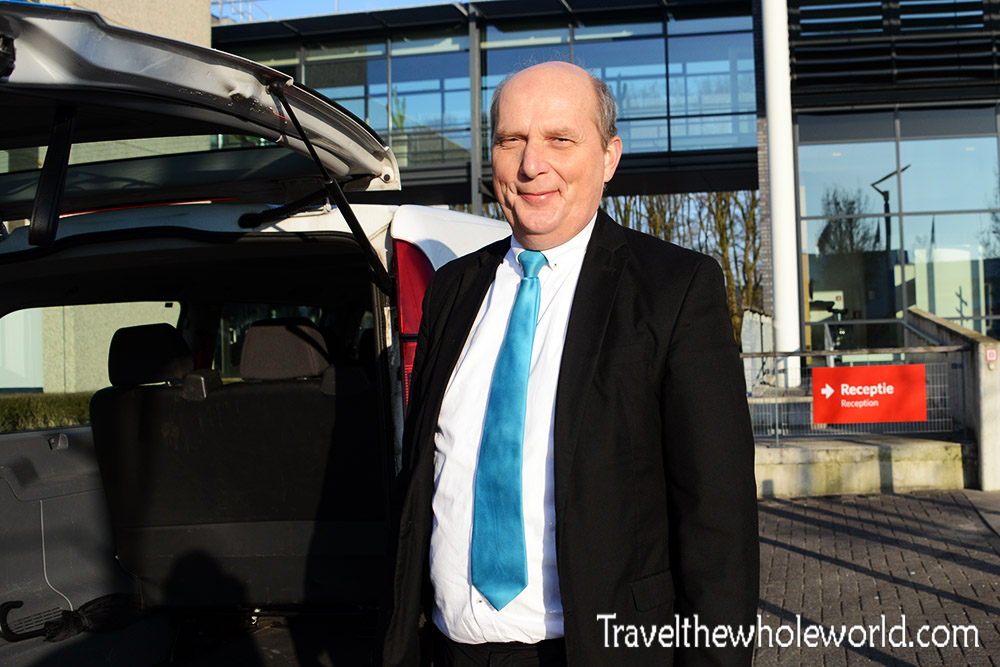 While I walked every where in the country, when it was time for work, we took a shuttle from the city center to our company’s headquarters each morning. We had various drivers but I often seemed to end up with this guy photographed above. He was by far the most entertaining and was nice enough to let me take his photo! 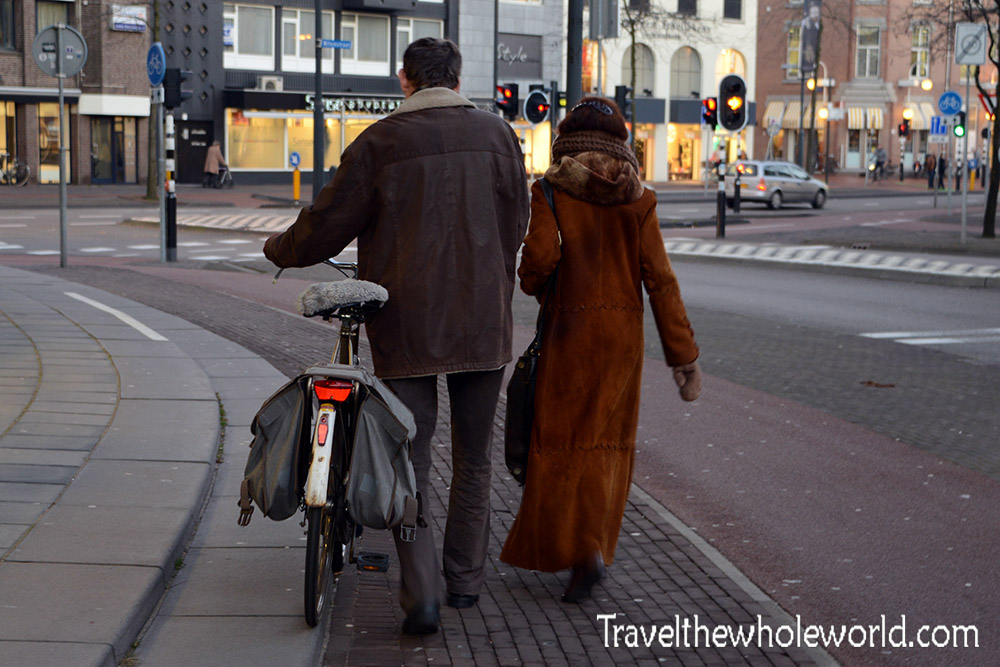 For the rest of the Dutch people, bikes and walking seem to be the most common way to travel within a city. I found it interesting that the bike paths were larger than the sidewalks with enough room for bike traffic to go both ways on either side of the road. Something else I found interesting was that most of the bikes I’ve seen in the Netherlands seem pretty old. It was strange to see people well dressed up but riding a bike that seemed like it might have been abandoned. I finally came across a bike store while exploring the city and saw that the old fashioned type bikes that I see along the street are all that they actually sell here. I was told by a local that if you bought a newer or high end bike it’d be stolen within a few days! 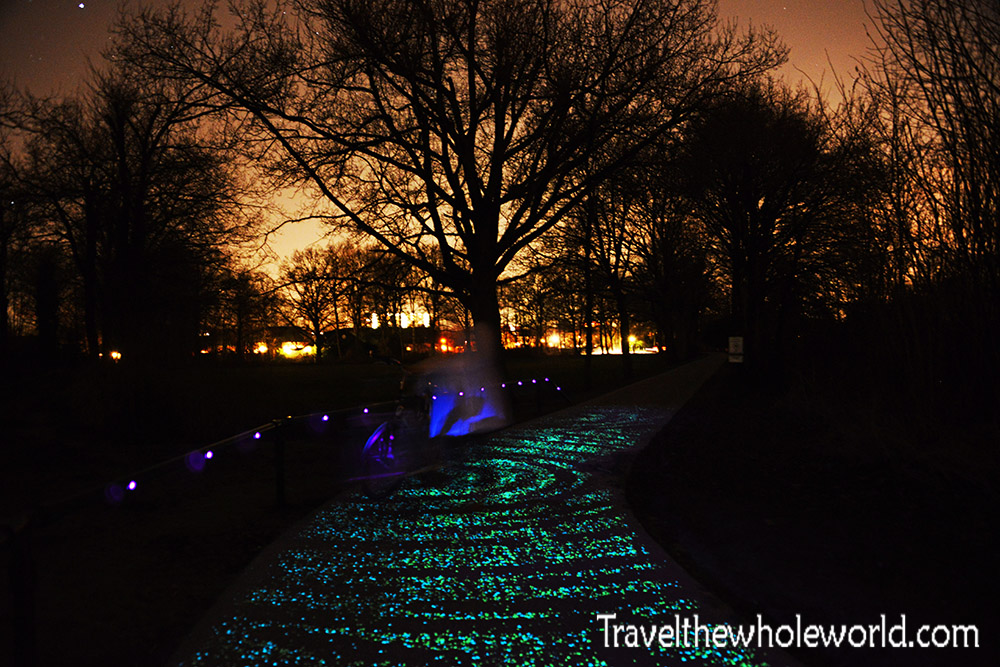 Maybe my favorite experience in Eindhoven were these final two photos above and below. Most of my experiences in Eindhoven were after work and dark during the winters that I visited, but this is a place you have to experience at night. Since Van Gogh lived not too far away from here, they honored him with his very own Starry Night bike trail! The famous Starry Night painting is considered by many to be his best work. The trail is over a mile long (1.5 kilometers) and was painted with some special type of chemical that glows in the dark resembling his painting. 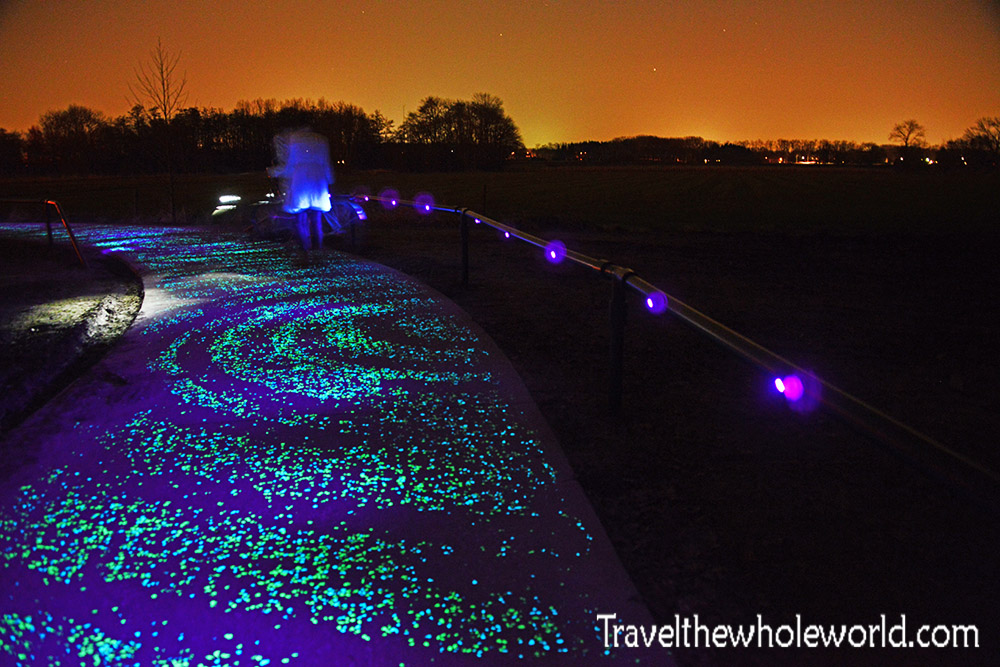