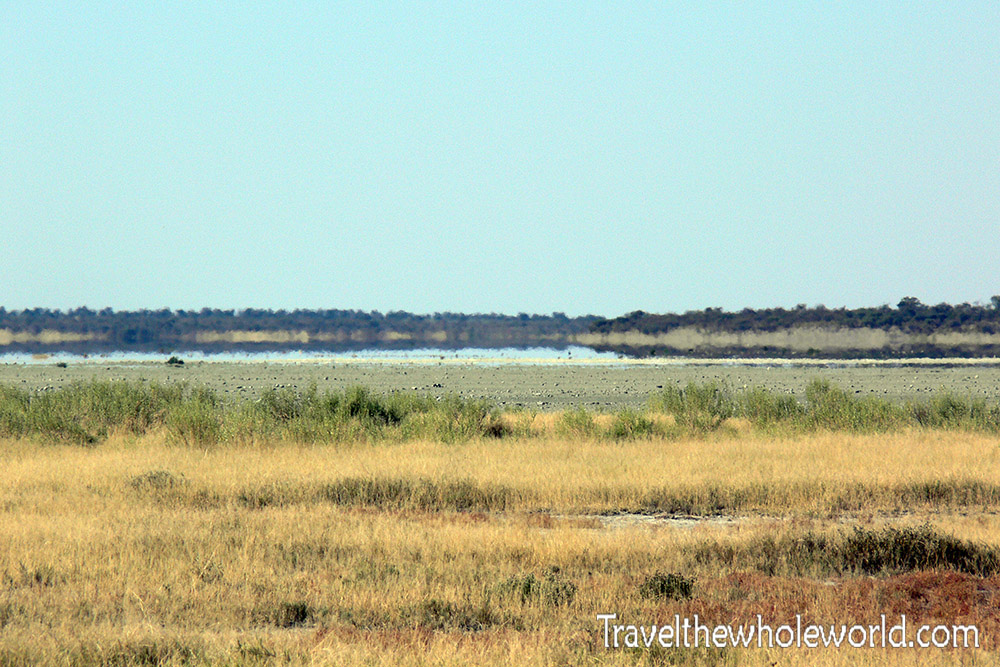 Etosha national park was once the largest park in the world. Sadly decisions were made to continuously reduce the size, until it became about a third of its former self. It once contained the big five, but hippos are no longer within the parks borders. And I hadn’t really thought about it until after I visited, but Etosha national park isn’t really a scenic place. Most of it looks like this photo above; grassland with patches of forest and waterholes, and even the occasional lake. Luckily though, the reason to visit Etosha is not for the scenery but the vast amount of wildlife here. At the time of my visit, this was by far my best African wildlife experience. 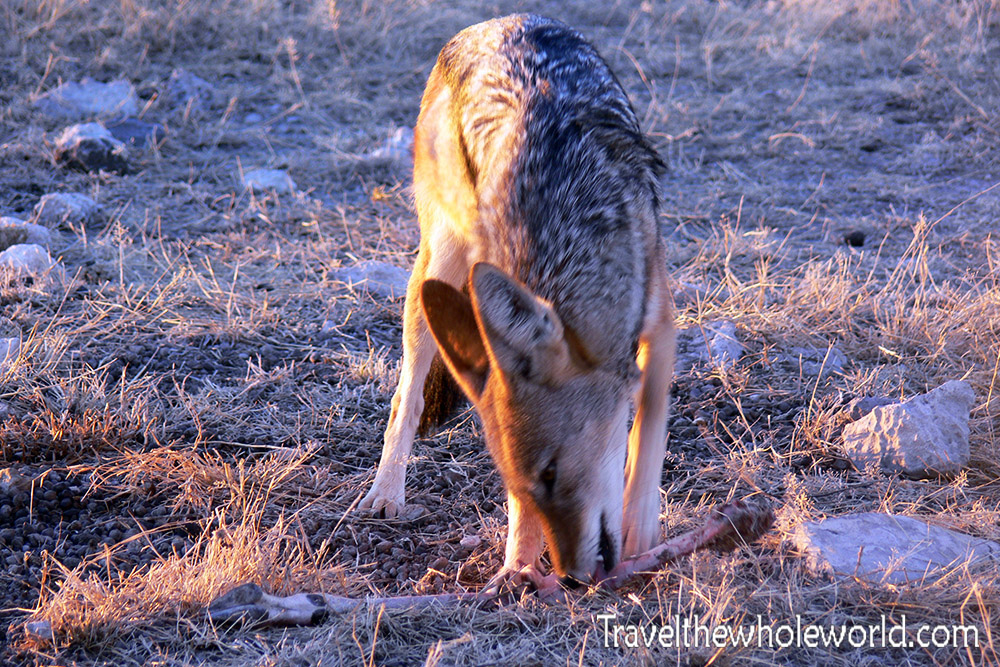 I began my excursion to Etosha national park early in the morning to increase my chances of seeing wildlife. Animals aren’t a big fan of heat, and aside from that most are nocturnal because the darkness makes it easier for them to hide from predators. One impala failed to survive the previous night. One of my first photos was of this jackal eating the remains of an impala leg that was likely killed by a lion. Soon after I photographed this warthog below. 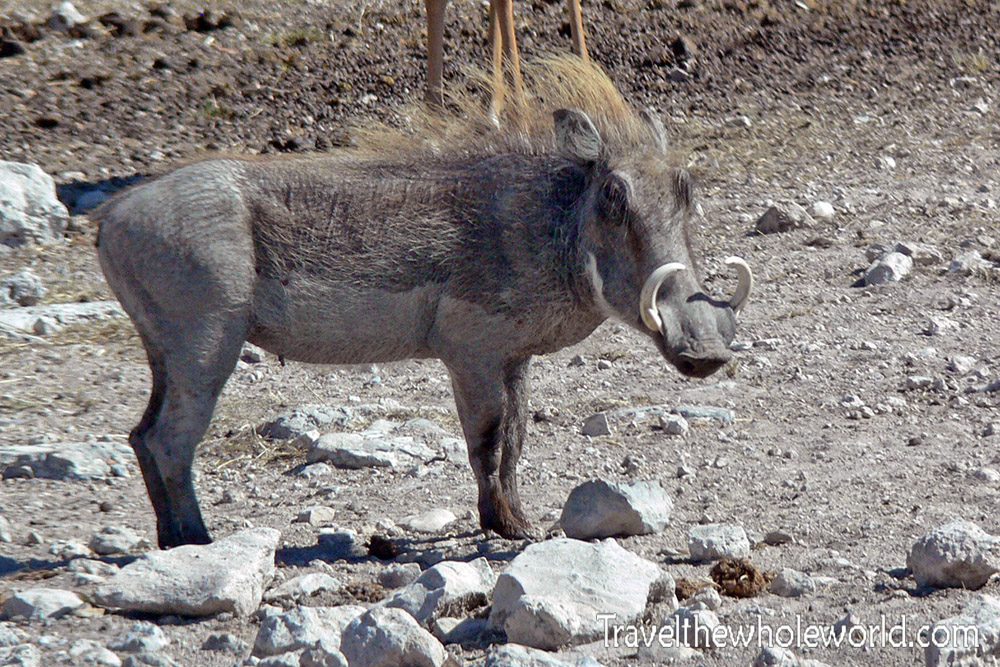 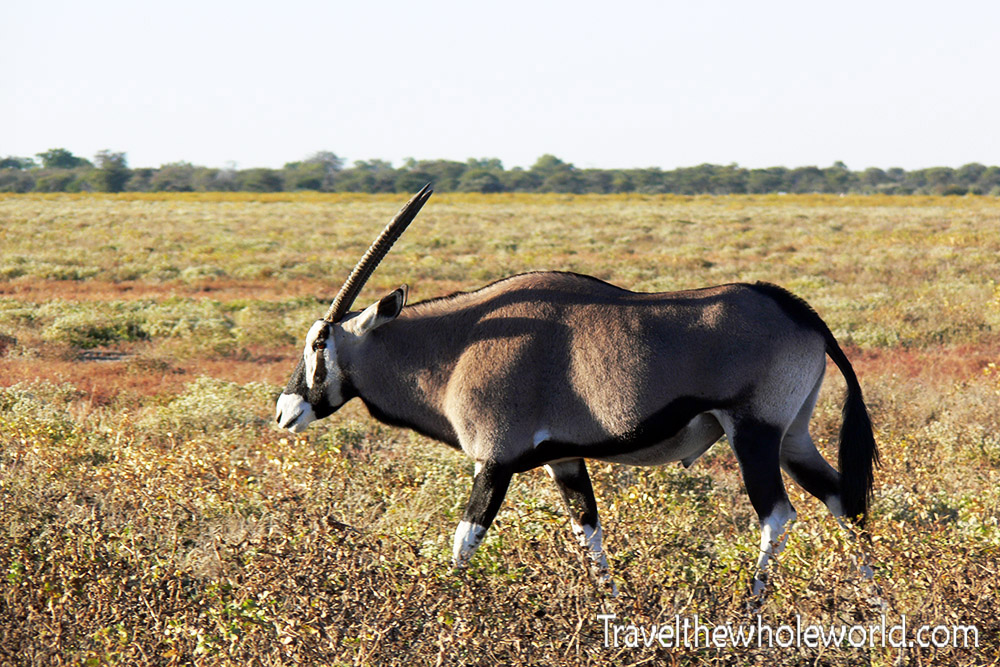 The two pictures above and below show some of the large mammals from the park. I saw several species of grazers while in Etosha. The gemsbok above is actually the national animal of Namibia. Below is a blue wildebeest, a much more common animal seen in most of the continent. 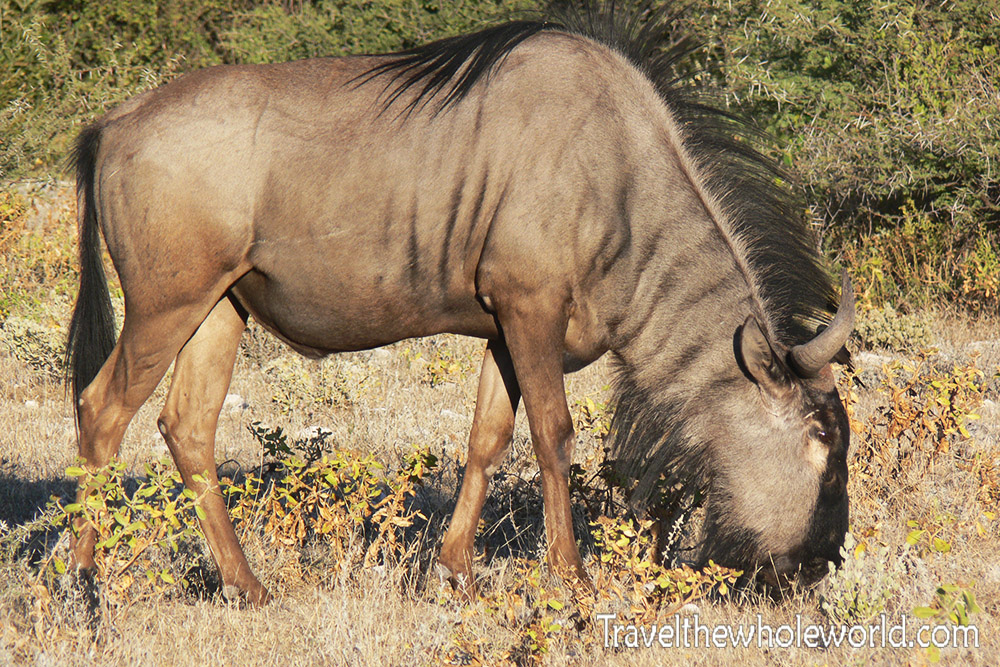 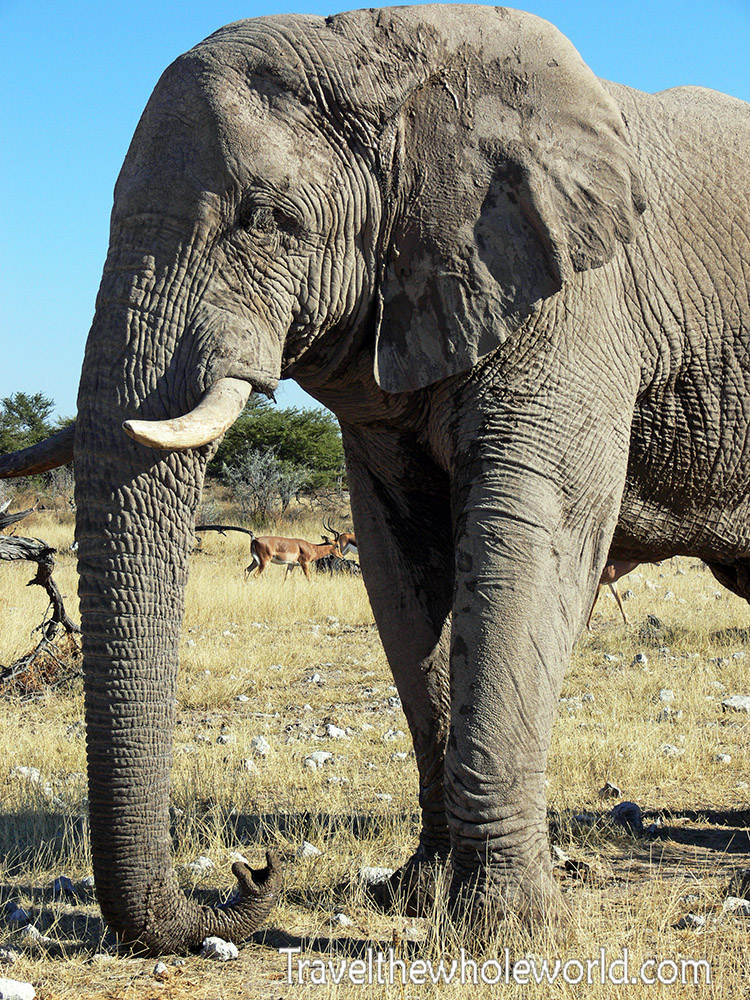 Wildlife in Etosha include elephants, lions, rhinos, zebras and many of Africa’s most famous animals. The elephant above shows just how huge earth’s largest land animal is. Until I took this photo I never realized that their trunks were so long that they dragged along the ground! 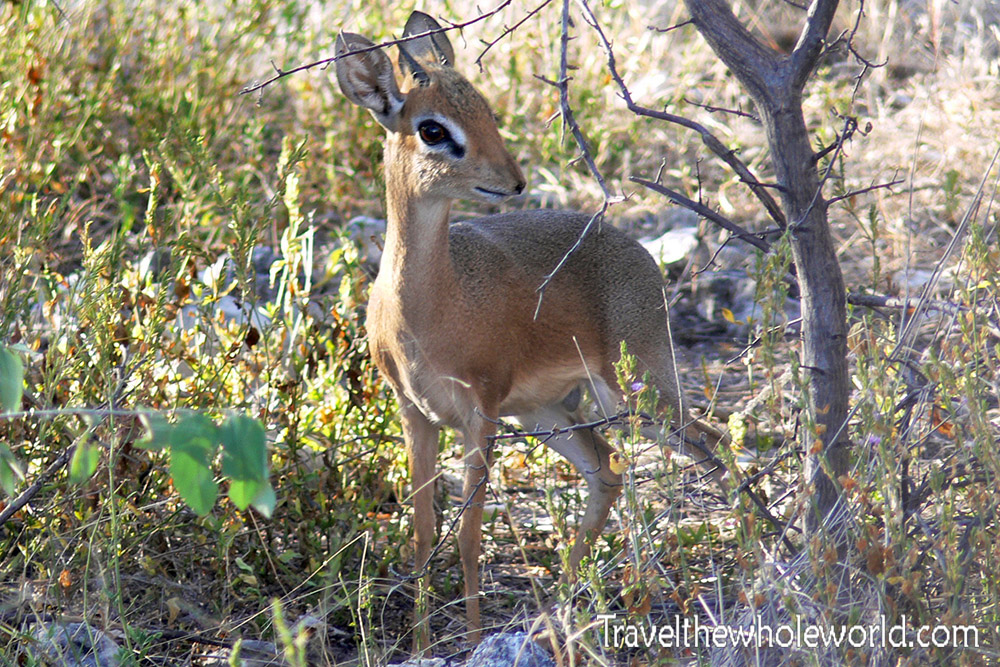 Maybe the most unique mammal that I saw while in Etosha national park was this dik-dik. These tiny animals are famous because of their “marriage” and extremely loyalty. Dik-diks will find another mate and stay with that mate for life. If that mate passes away they will not find a new partner The dik-diks look so small and timid it’s hard to believe they could survive in such a brutal environment. They are hunted by just about anything you can think of, from giant lizards, to hyenas and eagles. 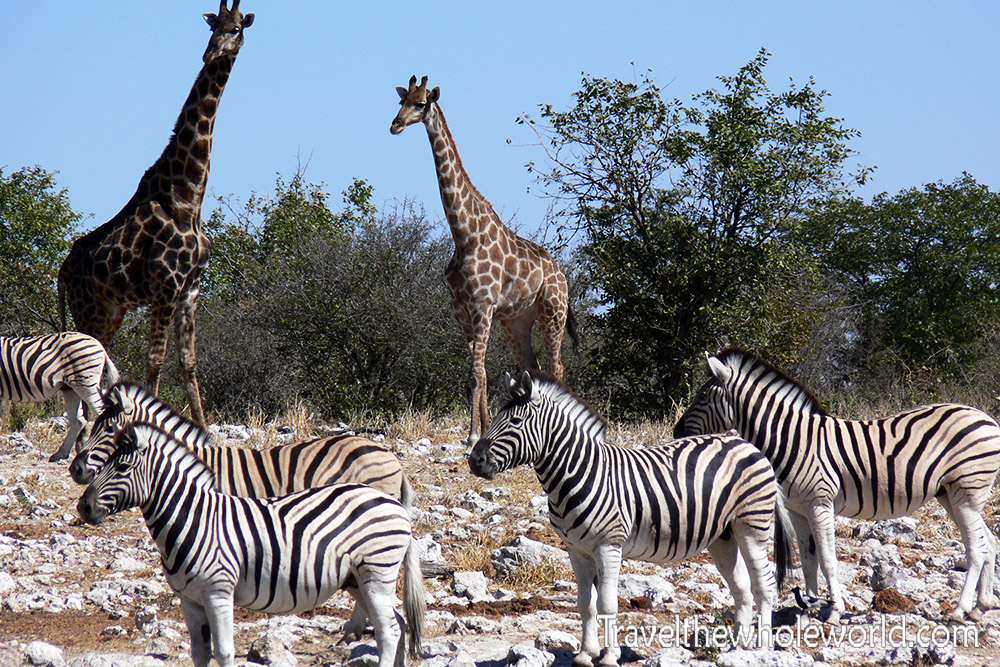 I actually did spot a lion in Etosha, but it was under a tree and such thick foliage there was no chance to photograph it. The only reason I noticed the lion was because the animals nearby kept staring in his direction and were obviously nervous. The giraffe and zebras stared at the lion for the longest time, while the lion seemed more interested in sleeping. I think if the animals were smart, they could have recruited a few hundred other zebras, wildebeeste, gemboks etc and all simultaneously attacked the lions. They’d take some losses but would definitely win and have created their own utopia without any predators. 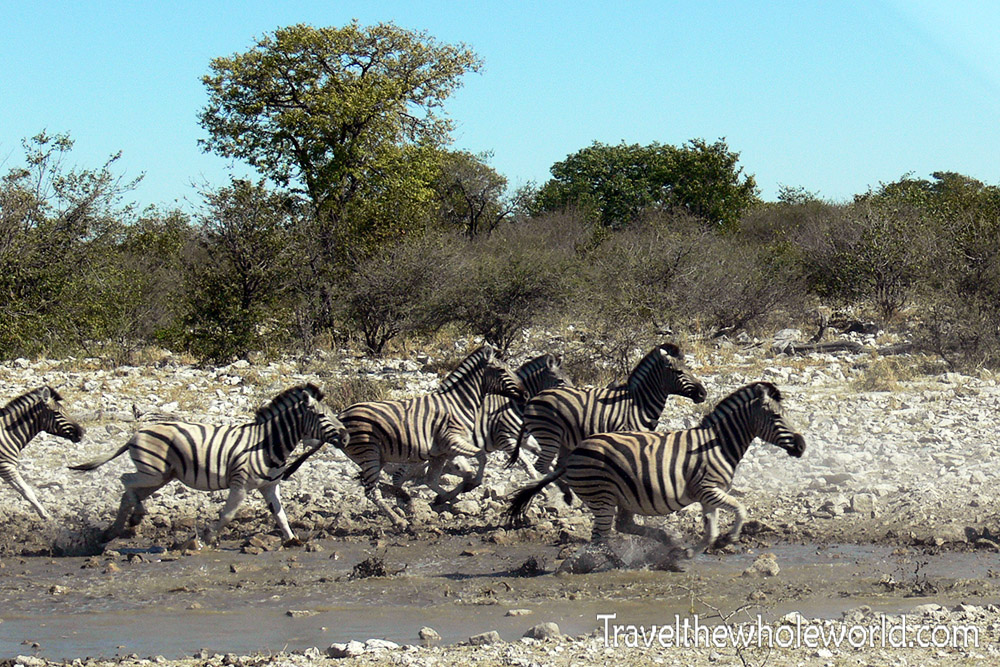 They’ll never band together and fight off their predators so the cycle will continue forever. One of the lions rolled over and spooked the zebras who all took off running. 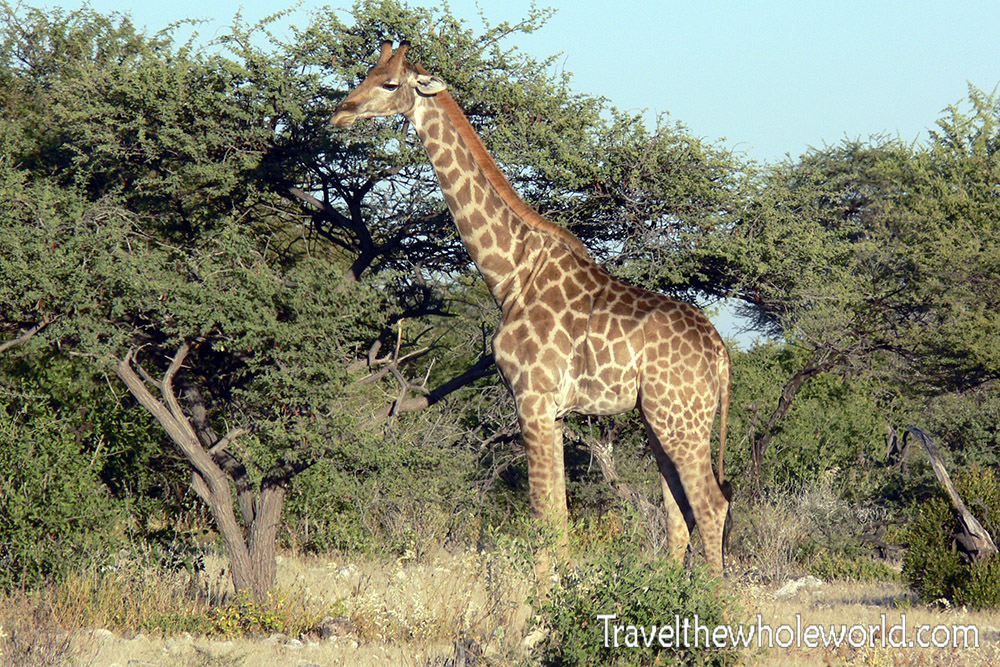 I saw lots of giraffes while in Etosha. The tallest animal in the world seems less of a preferred meal for predators because their height actually makes them awkward to attack. The only way to attack a giraffe is to successfully leap up on the animal and try to bring them down to the ground. Several lions working together can do this, but it’s much easier to just go after a zebra. Giraffe’s height is actually helps keep them safe for this reason, but when its take tim drink some water it puts them in an awkward and vulernable position. 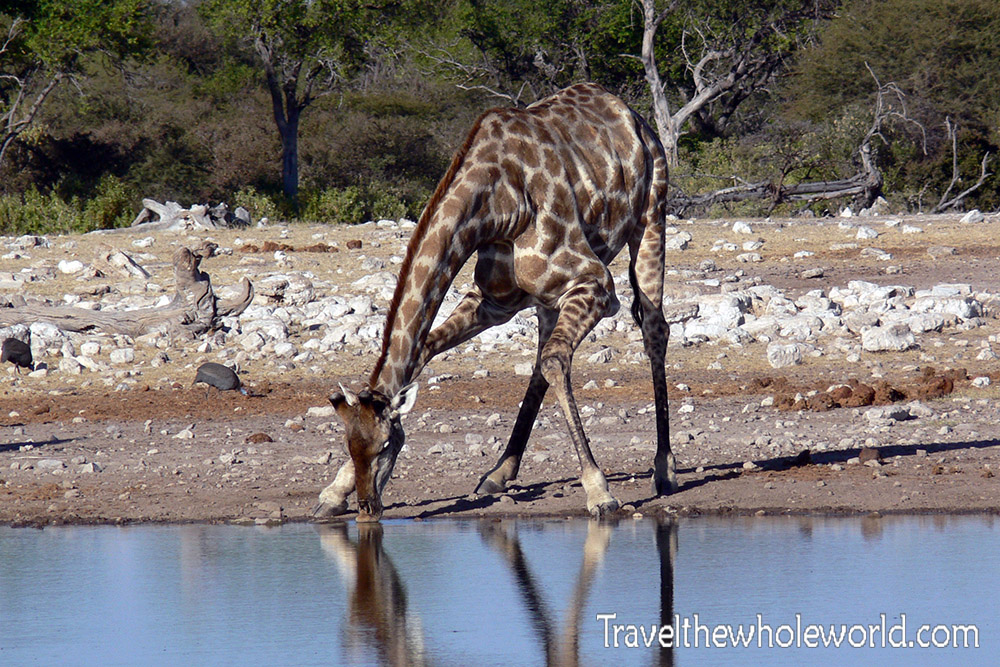 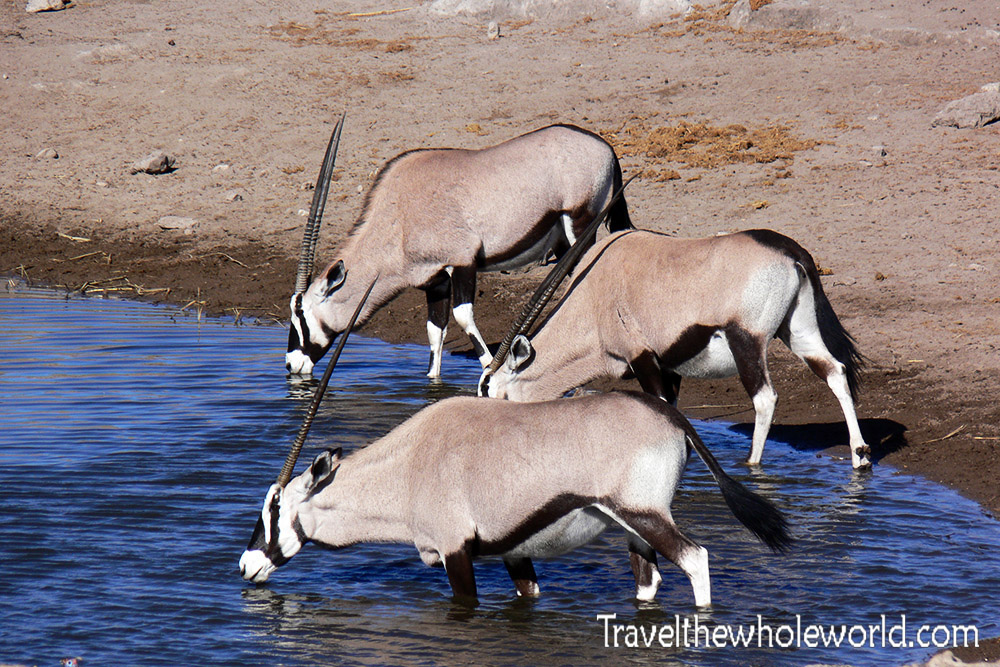 When you’re looking for wildlife in Africa, the best place to wait is by a drinking hole on a hot day. It’s a place where lions also like to hang out, and the ones I had spotted weren’t to far away from another water hole. At this one, I was able to see several gemboks together going for a drink. 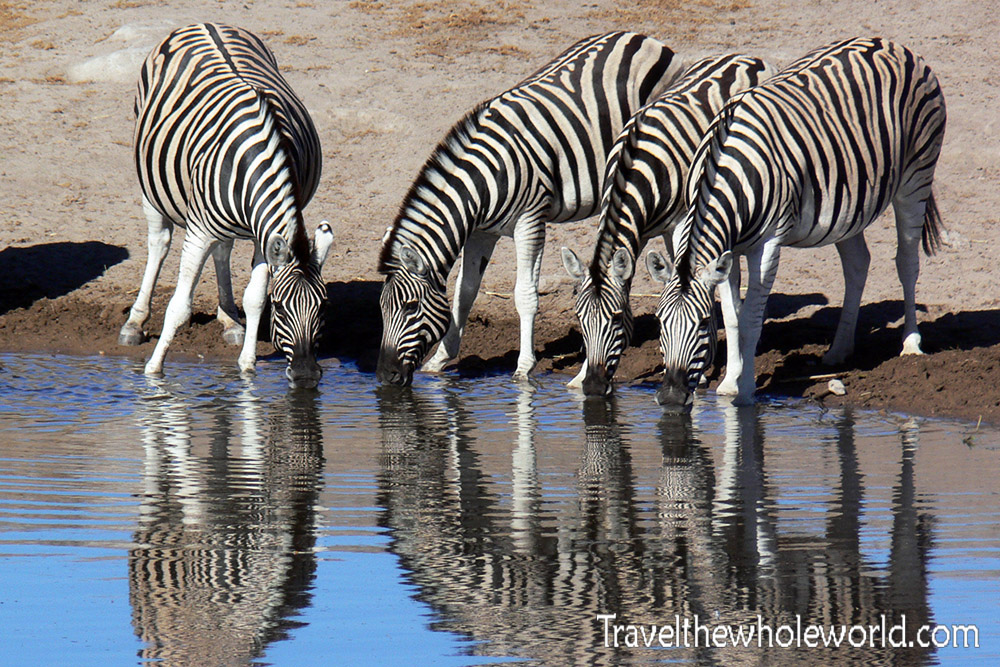 I’m not sure if this is normal or not, but I thought the zebra on the left looked a bit obese compared to what I’d expect. In the photo below, you can see a young kudu keeping watch while its mother hydrates. 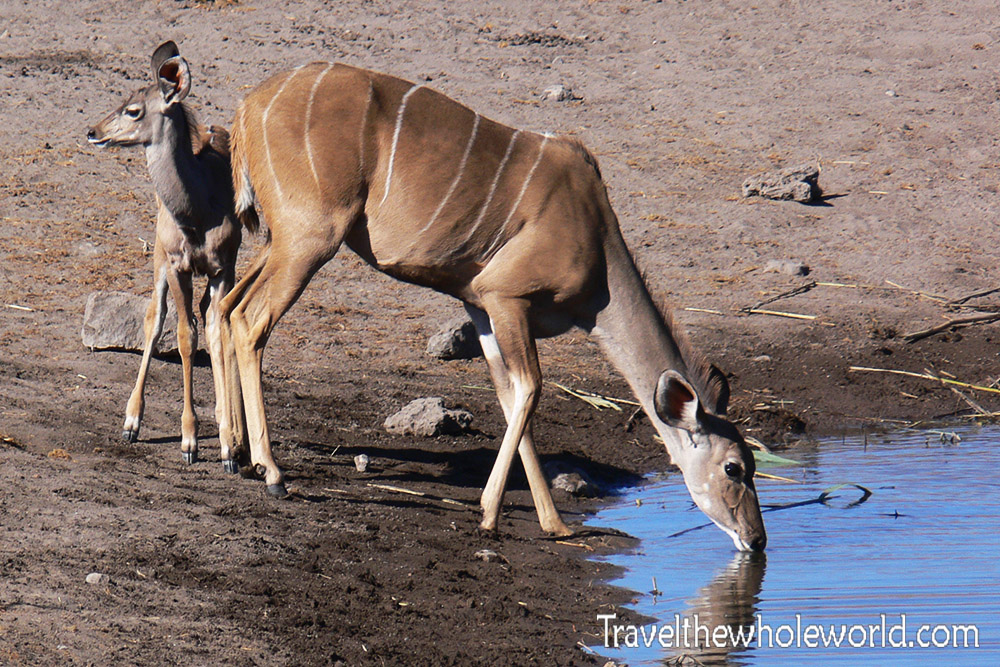 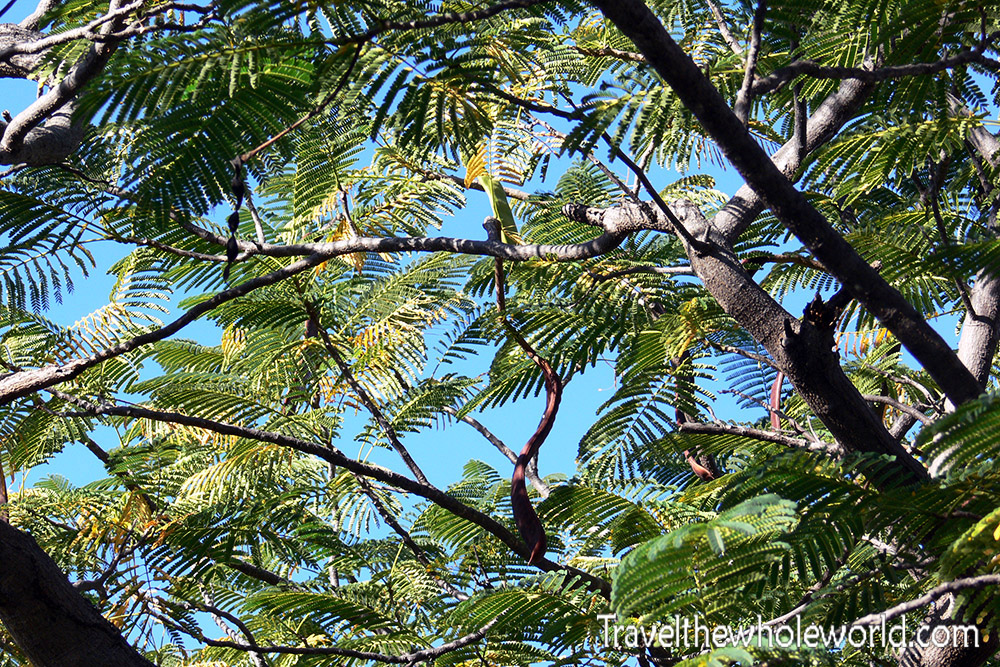 Since Etosha national park is mostly made up of dry lands and Savannah, you’d not expect it to be a bird watchers paradise. I probably took more photos of birds here than any other place I’ve ever traveled to. I visited Etosha by driving a personal car and just parking somewhere and let the wildlife come to me. It seemed that nearly every bird that landed close by was a interesting species. The photo above shows some rare greenery in Etosha. The dryness here actually worked to my favor since it made it much easier to spot wildlife. If all the trees were as green and thick as this one then I’d likely hardly spotted any birds. 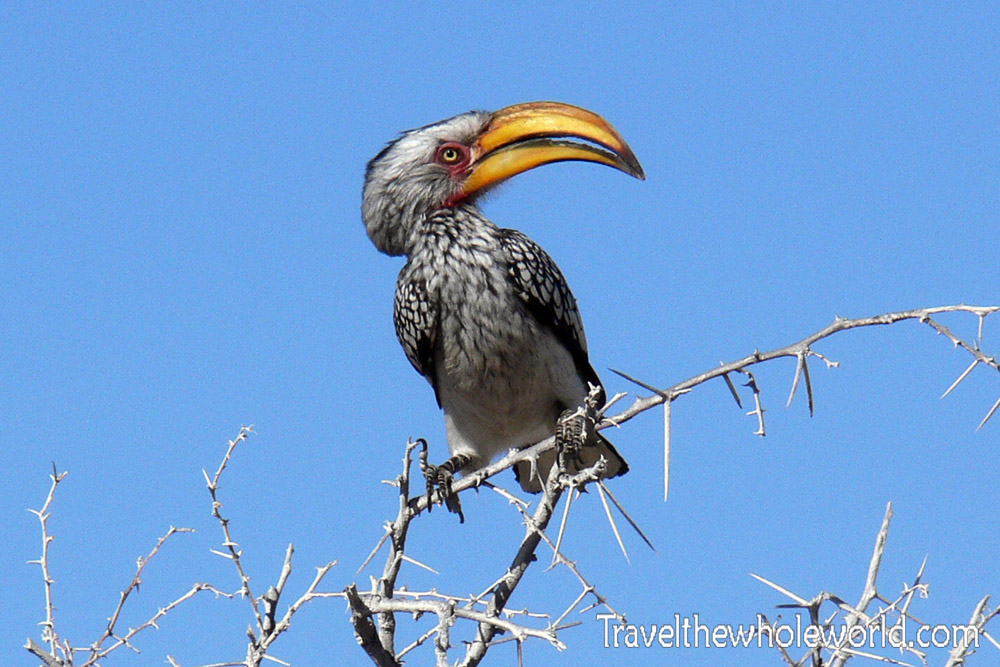 I thought this bird looked prehistoric to me. I found out that it’s a southern yellow-billed hornbill. For the most part these birds live only in the Savannah of southern Africa. They don’t live much further north that Etosha, and can’t be found anywhere in the lower parts of South Africa for example. 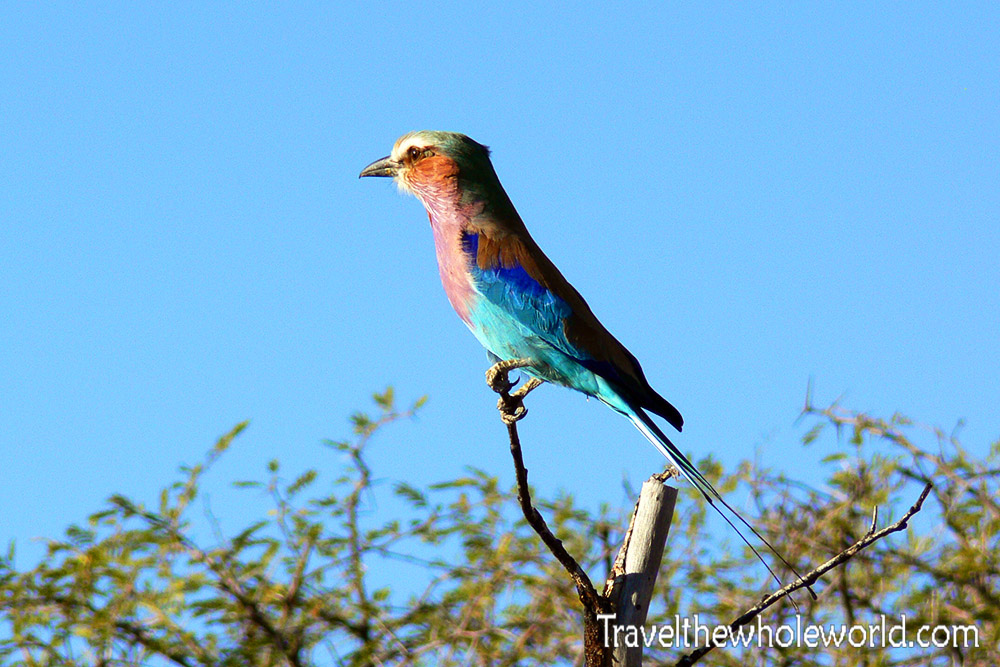 The colorful roller bird was definitely one of my favorites. It is neighboring Botswana’s national bird. The photo below shows a purple waxbill. 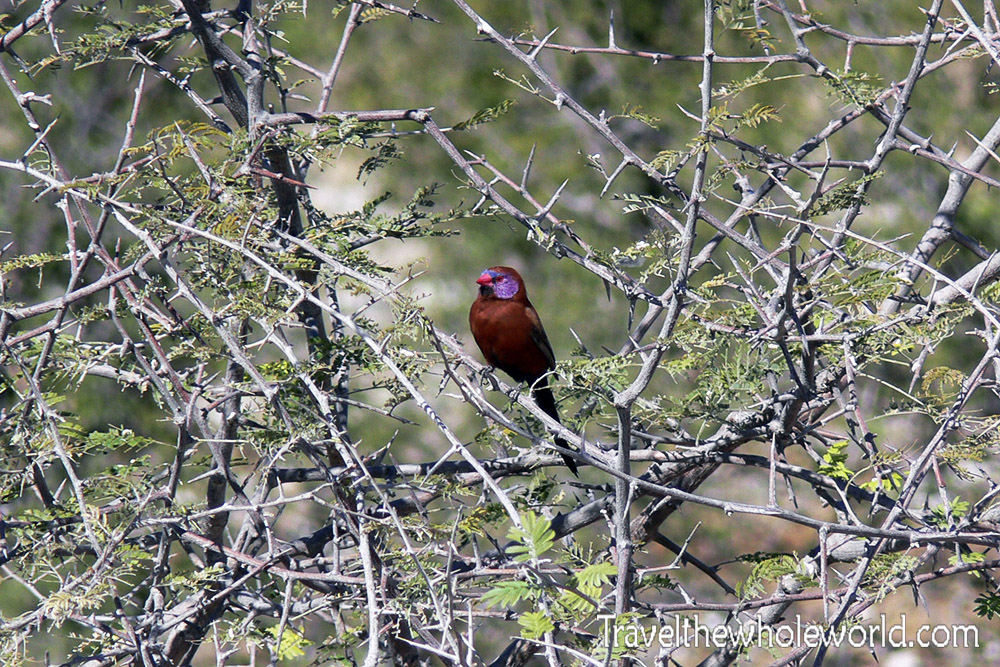 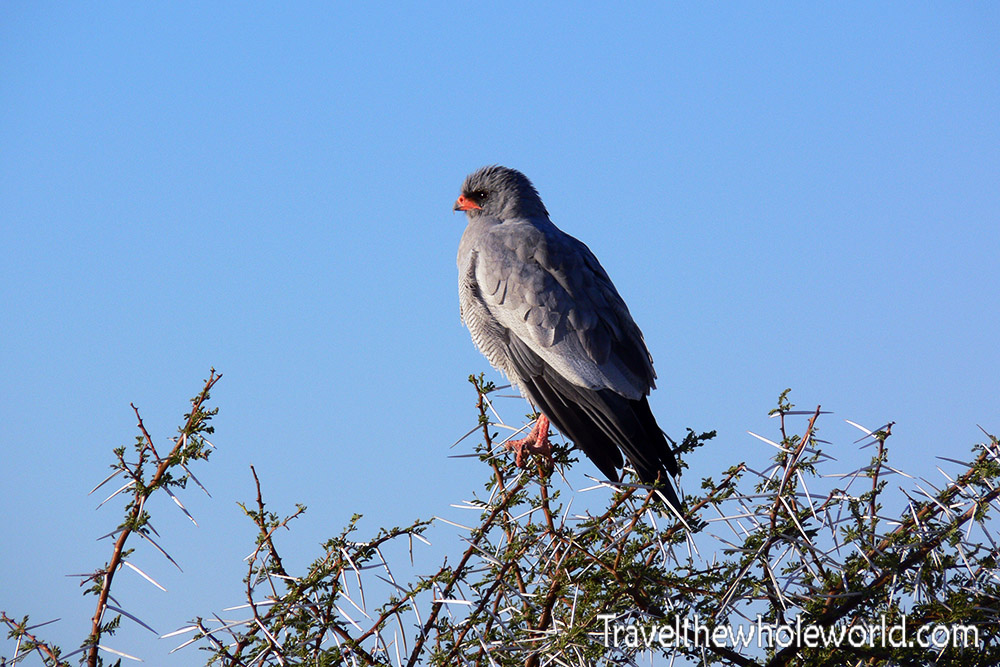 Last on my Etosha page is a bird of prey, the pale chanting goshawk. Its diet consists of everything from insects and lizards to other birds and small mammals.