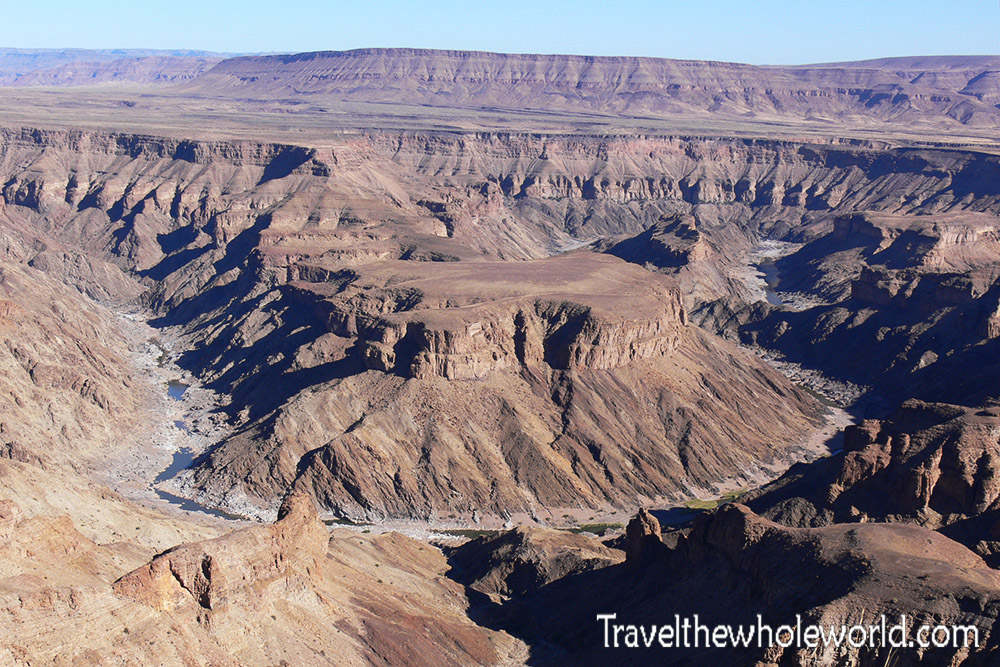 Namibia’s holds some of the most vast and beautiful deserts on earth. Before my trip to Namibia, my only experiences with deserts had been in places like Arizona and Nevada. Lifeless terrain and endless sand dunes have always intrigued me, and to date I believe the best place in the world to experience this is Namibia. One of my main goals in the country was to see Fish River Canyon. Fish River Canyon, are the largest canyons in Africa and the third largest canyons in the world. There are several popular trails that hikers can take; some of them are only a few hours while others take an entire week. 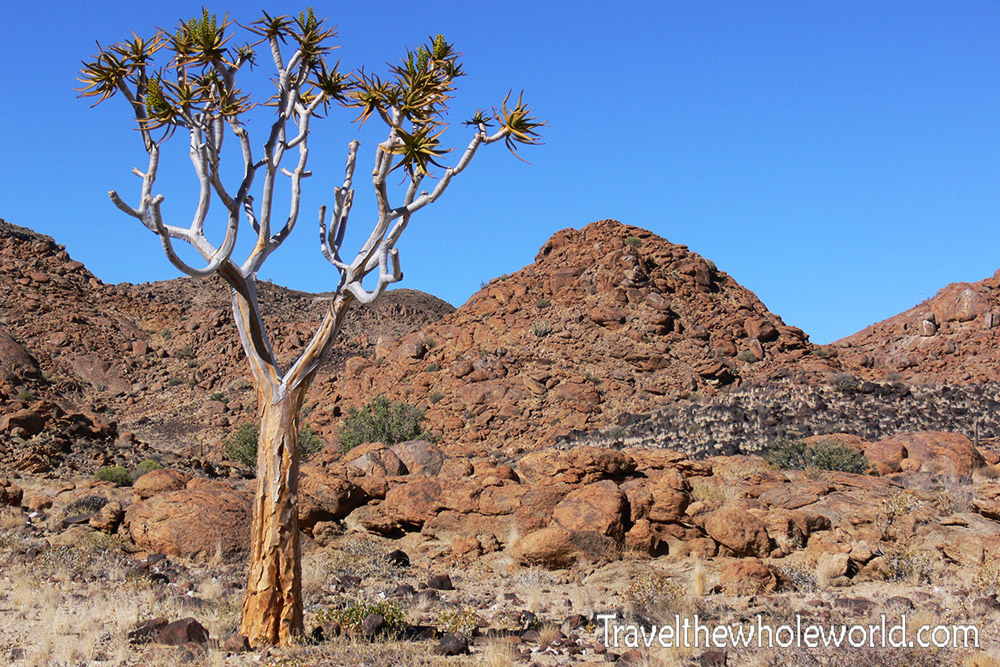 Hiring a guide to explore the canyon is mandatory because of the wildlife in the area.I didn’t do any overnight hikes in the canyons, but during my visit I came across three large kudus and several baboons. Somehow I only left with a handful of photos. The photo above shows some scenery from Fish River Canyon. I took the picture because it was one of the few trees I saw in this part of Namibia. I did come across a few smaller thorn trees that looked dead, but this one still had some leaves on it. It’s amazing how they can survive in such an extreme environment. The photo below shows another desert canyon I came across elsewhere in the country. 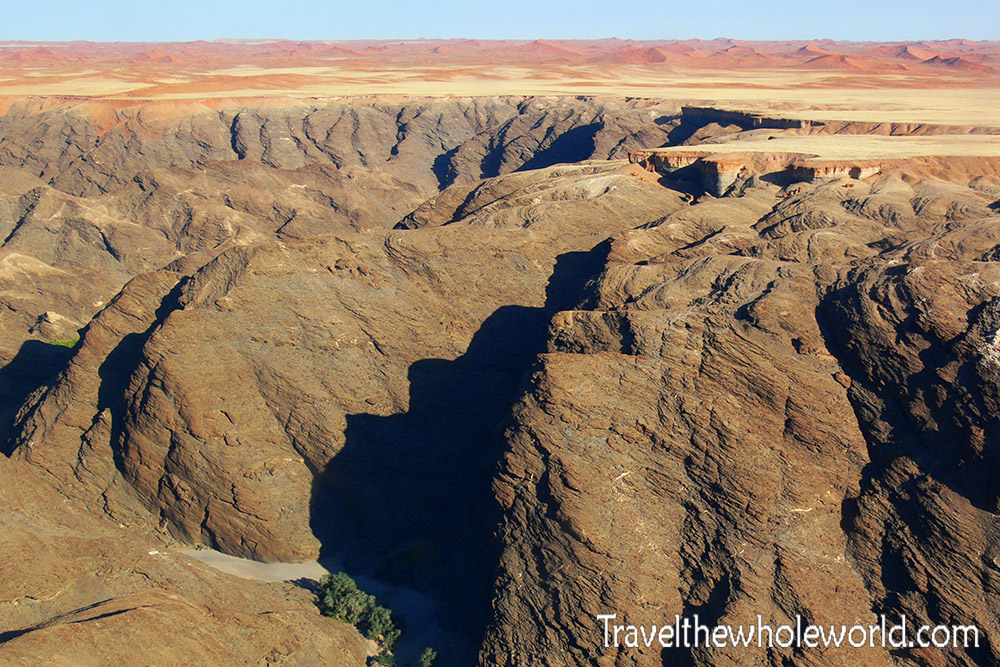 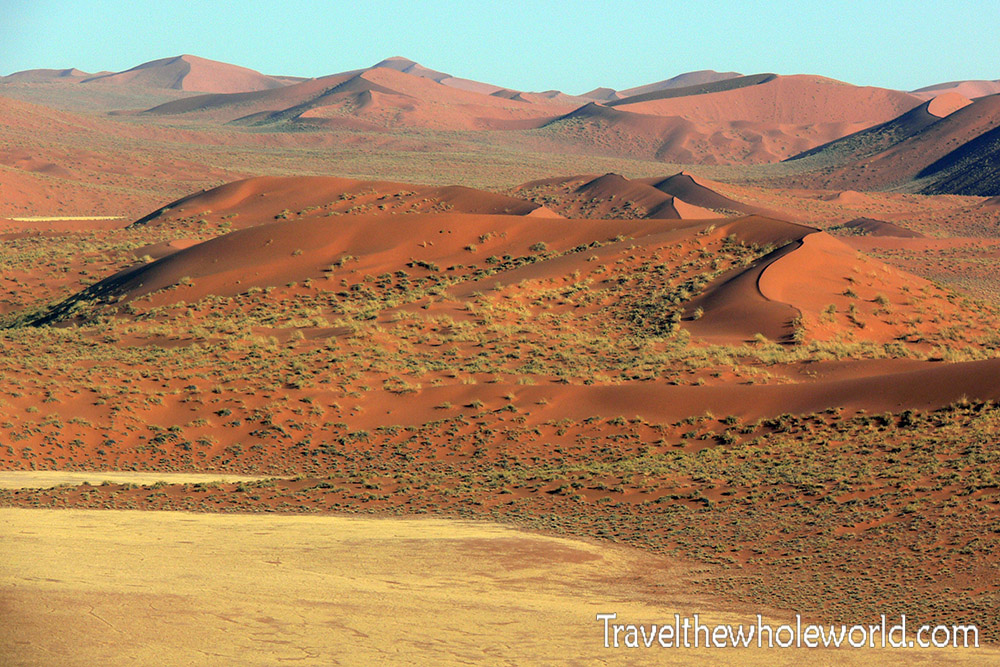 The deserts in Namibia are not all the same. This one had reddish sand and was decorated with green shrubs across its dunes. In the photo below, you can see where the desert meets the Savannah, likely with a tiny river or creek forming a barrier between the two. 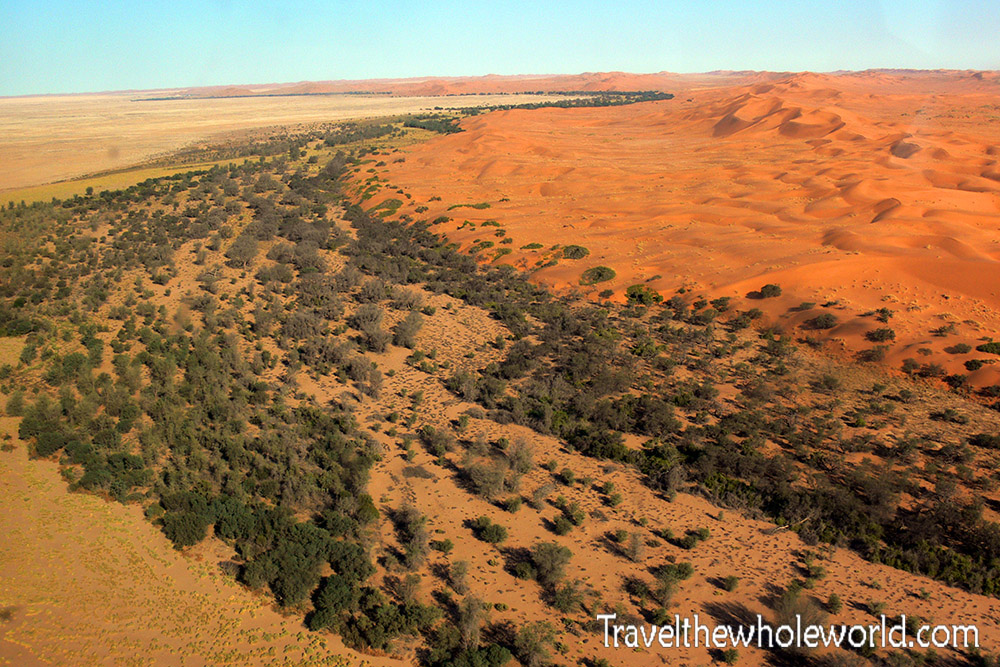 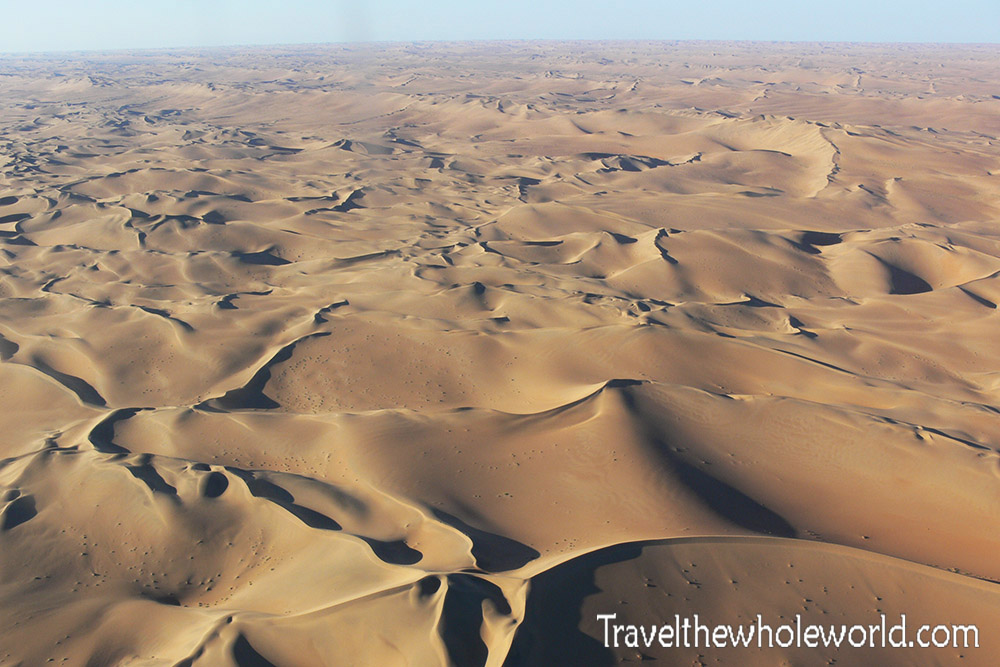 Namibia’s entire western coast is mostly made up of desert. Namibia is the only place that I’ve been to in my life wehre I’ve seen endless oceans of sand dunes in all directions. In this region of Namibia you can find the highest sand dunes in the world. A place called Sossuvlei has dunes that top off over 1,000 feet (330 meters)! Sossuvlei can be explored by some really fun activities such as four-wheeling and even things unique activities like sand boarding. 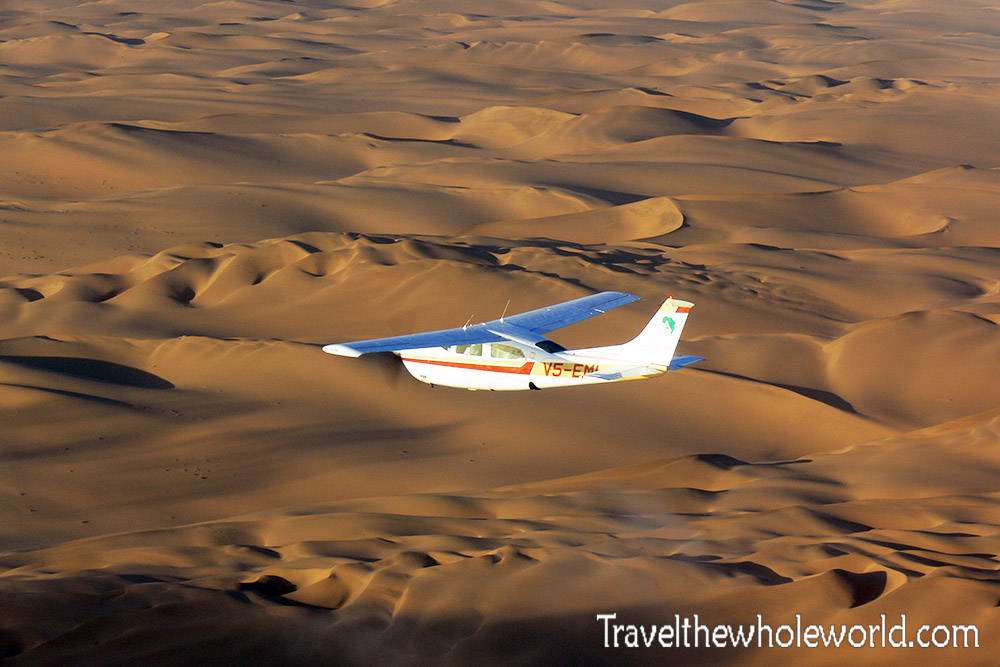 I did attempt to drive to Sossuvlei in my own car, but I was turned around by the police who said my car wouldn’t make it because the roads were too rough. It actually wasn’t a refusal to let me continue, but more of local advice which I took. I’d have to either rent a second car to go to Sossuvlei at this point or return to a major city and sign up for a guided tour. Instead, I decided to see the deserts from above! 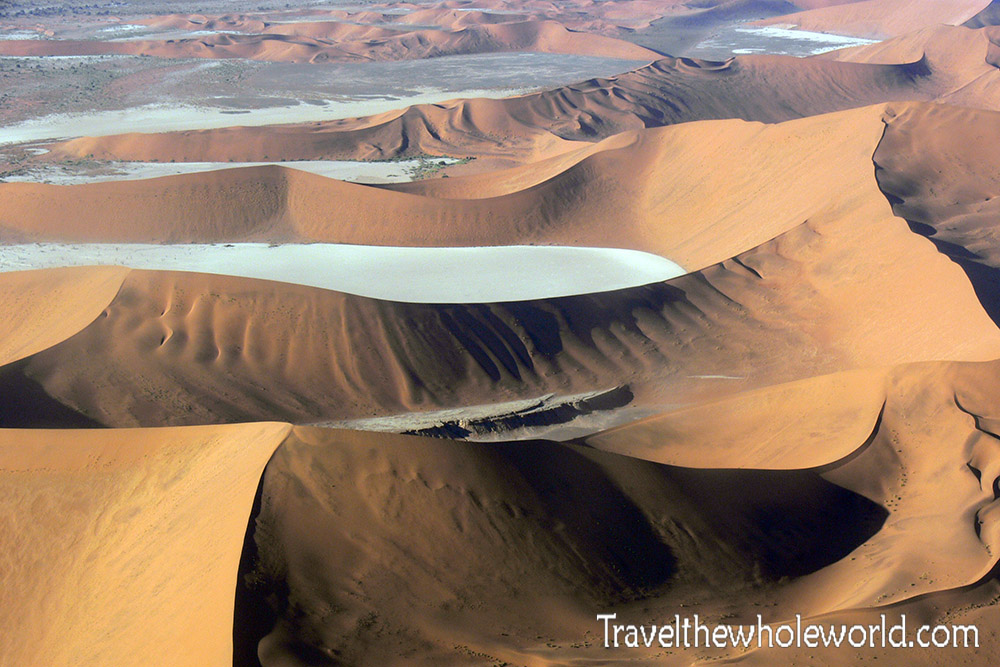 This was likely my favorite scenic flight ever. The views of the desert are so much better from a high vantage point.
I never had it pointed out, but somewhere in this region from the photo above is where Sossuvlei is located. The photo below shows a random patch that was somehow saved from the sand. I think the winds blow in such a way that it creates an empty bowl towards the bottom fo the dunes. 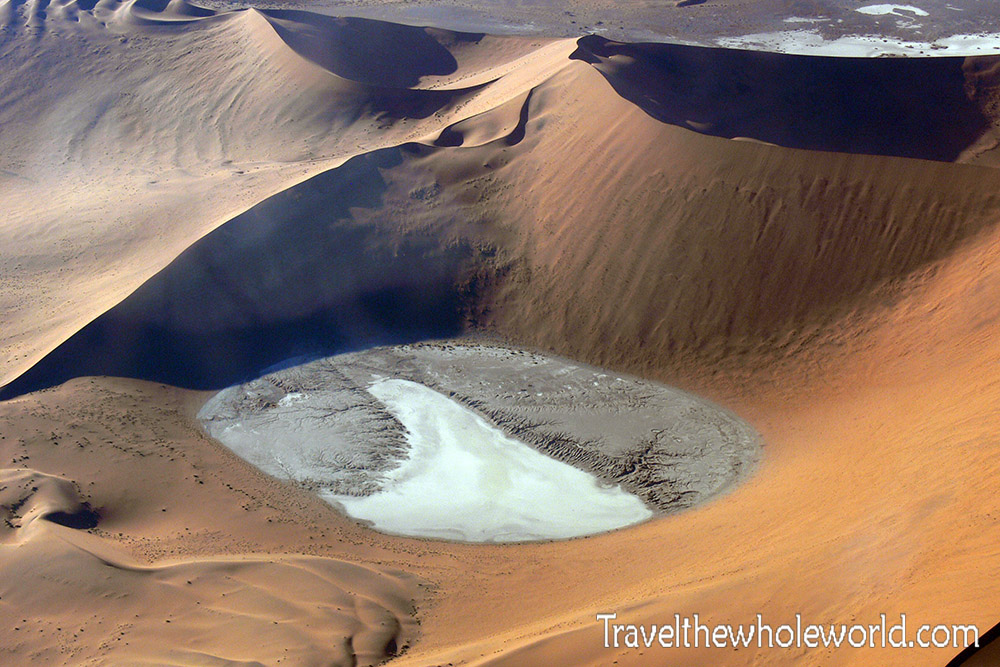 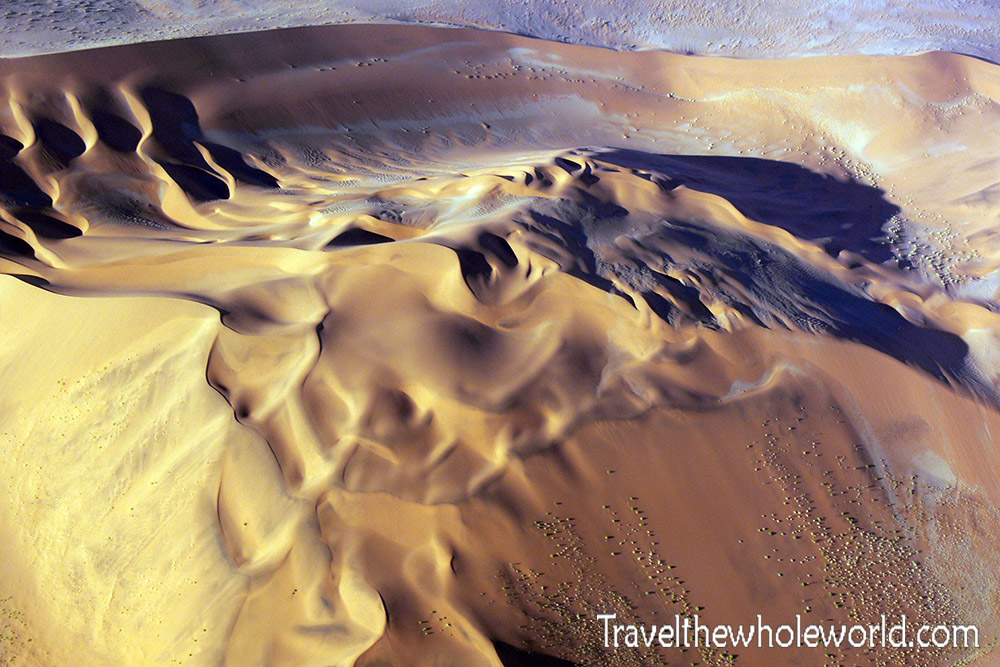 The red dunes were among my favorite, and second to that would be these strange looking beige dunes. The area looked more like it was covered in frosting than sand from above. 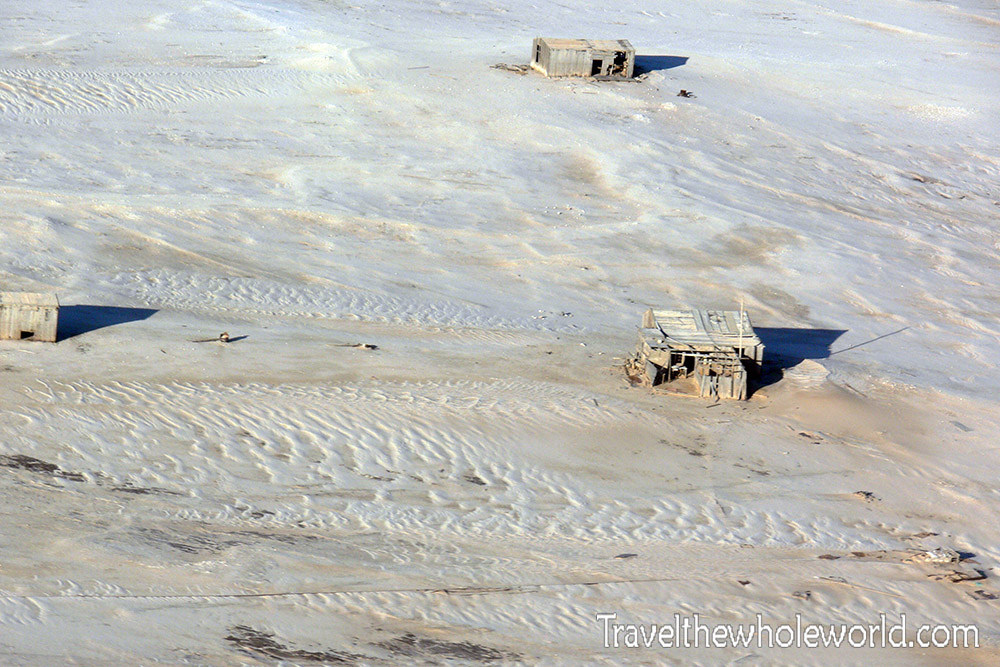 Despite Namibia’s deserts that make the country look like it’s nothing but sand, there are actually lots of minerals and gems in the country. At the time of my visit, the southwestern part of Namibia known as the Sperregebiet diamond region was off limits for travel. This area had actually been off limits for over a hundred years because of the vast resources of diamonds and other riches that can be mined here. Mining personnel were the only persons authorized to be in Sperregebiet; anyone else trespassing could get up to a year in prison or some even say shot! The paper road map I had of the area made it absolutely clear not to attempt to drive here. In a sudden reversal by the government, Sperregebiet went from being a place completely off limits to a national park. A place that will never change though is the Rossing uranium mine. It’s one of the largest uranium mines in the world and is still in use. I was actually able to do a flyover parts of the mining area and see some buildings that are no longer in use. 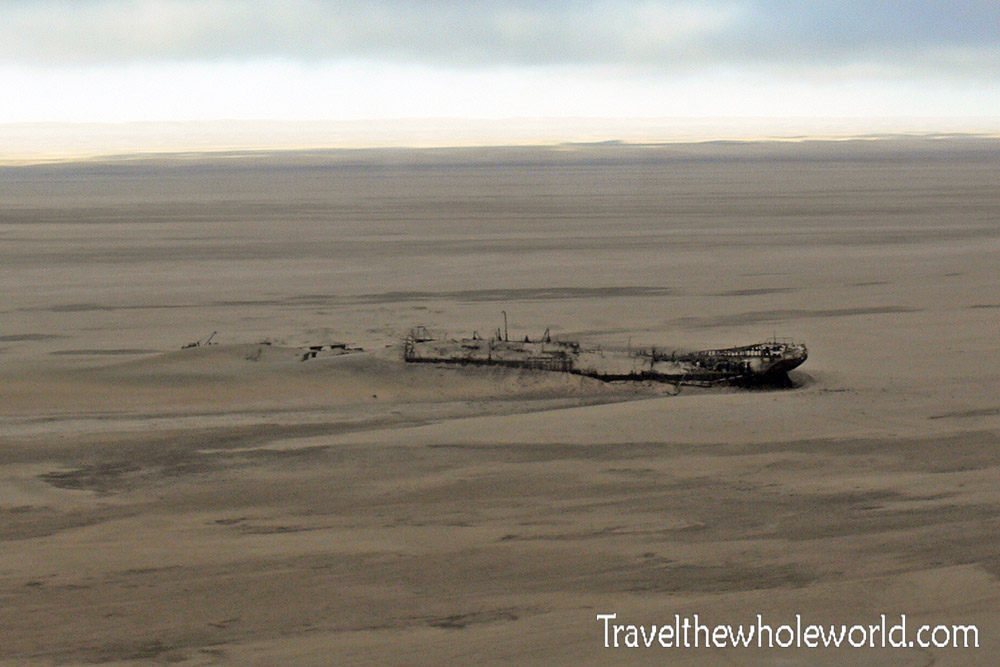 The coastal areas of Namibia are famous for its thick daily fog. This makes it an interesting experience, but a very dangerous place to visit for ships. This earned the region the name Skeleton Coast, for all the wrecked ships that can be found here. In some parts of Namibia, ship wrecks have been swallowed by the expanding desert. 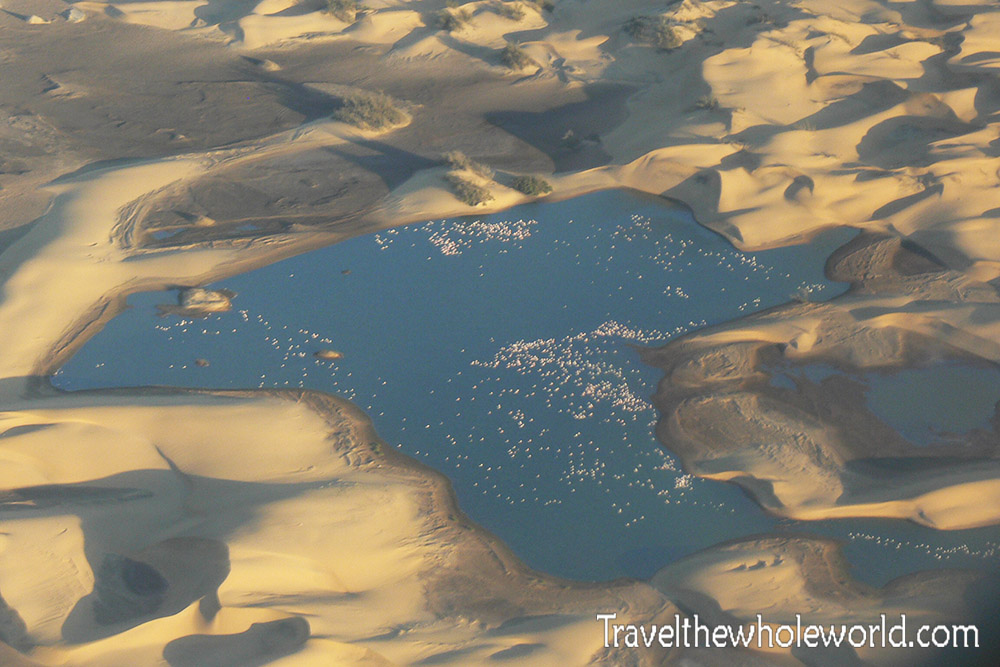 An unexpected sight from above was a coastal lake filled with wildlife. The pink dots you can see scattered above are actually hundreds of flamingos! The lake looked so remote that it would be difficult to access by land. Even a 4×4 vehicle would likely get stuck in the deep sand, and otherwise you’d have to plan a trek lasting several days to reach the place on foot. 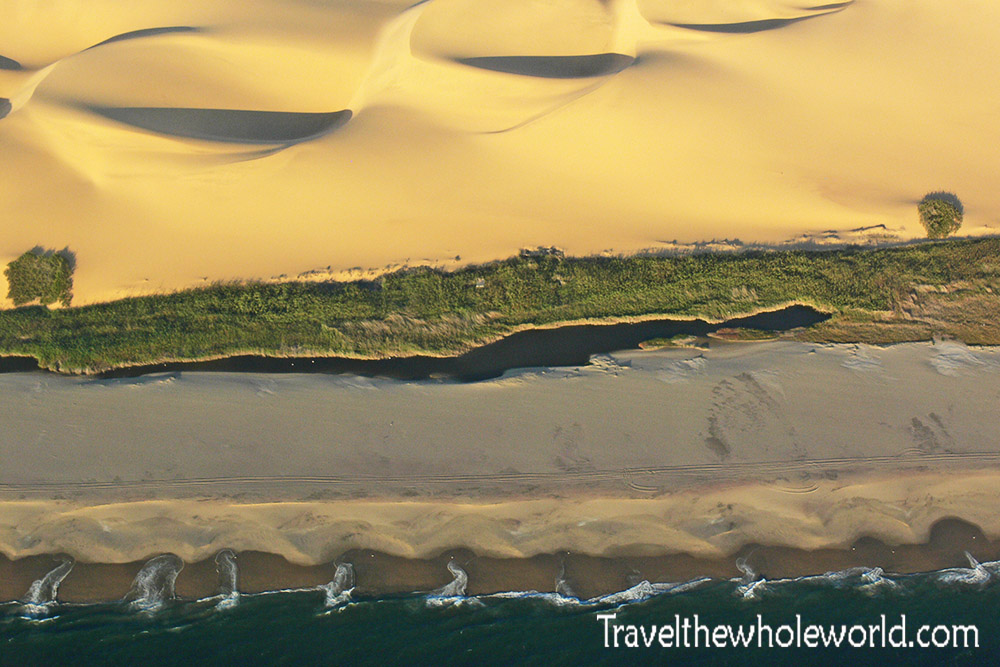 My favorite views from the scenic flight are where the desert meets the ocean. For the most part it was giant hills of sand that suddenly met the sea, while sometimes there were a few patches of green along the coast. I hadn’t seen any rain or fog on this entire trip for weeks, but just like I had read once I reached the end of the desert I could see thick fog hugging the coast. The fog appears daily, but usually clears up in the afternoon. 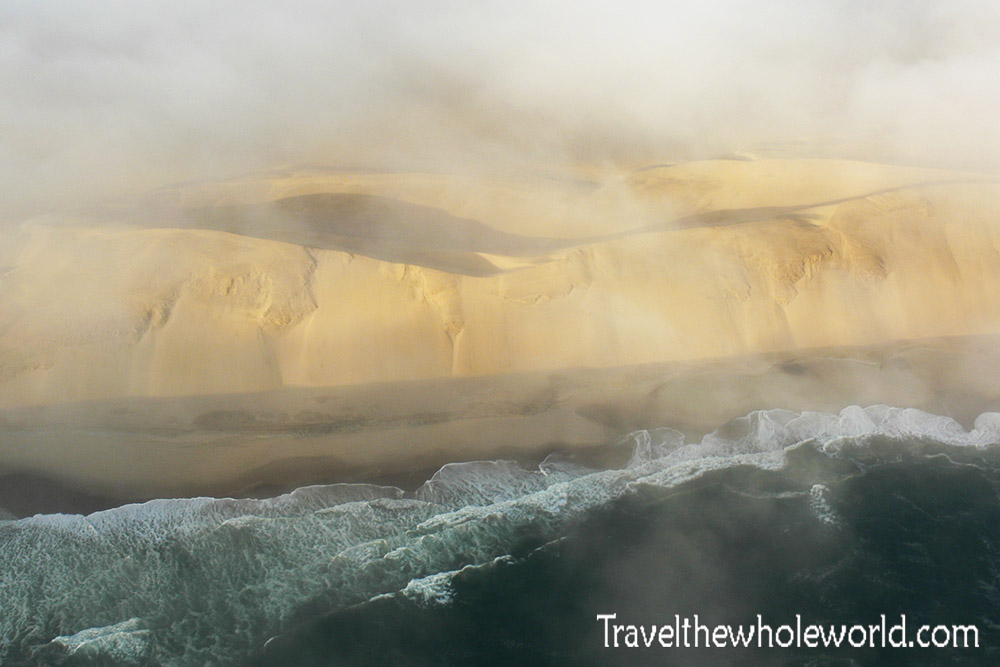