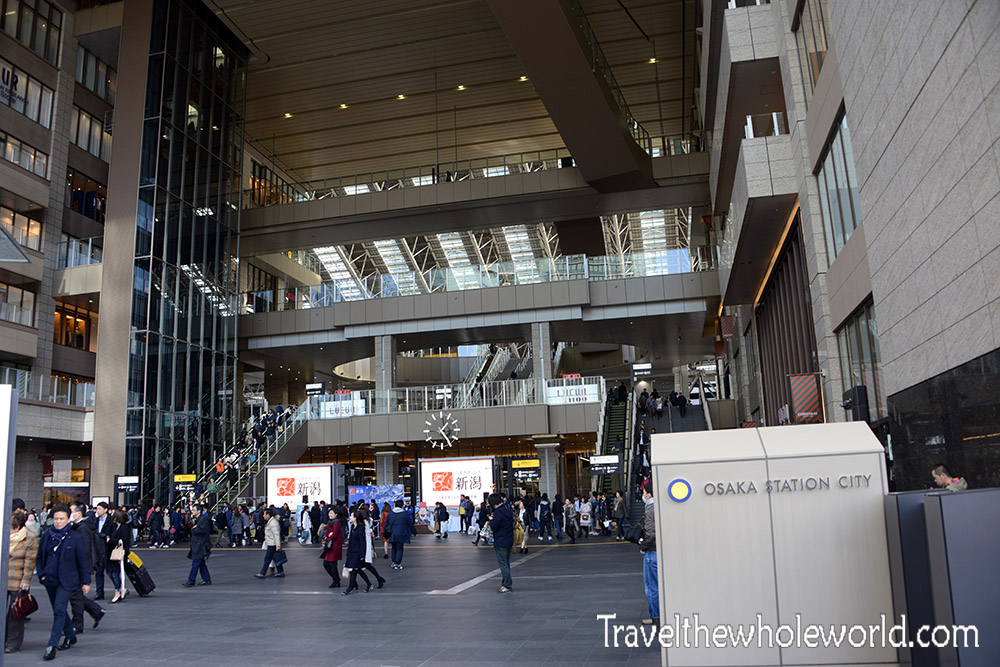 It took me over half a dozen visits to Japan until I finally made it to the country’s second largest city and ancient capital. Now after having visited both Tokyo and Osaka, I can say I feel they don’t share much in common. Tokyo definitely feels like one of the largest and densest cities in the world, but despite Osaka also being one of the largest cities in the world it didn’t give off that vibe. To me most of Tokyo feels overcrowded, while only some parts of Osaka felt crowded. These photos above and below were my first sights in Osaka, as I arrived at their massive train station and left through the stairs below. They’ve been a bit westernized, with lots of advertisements for Red Christmas, even though it wasn’t even December yet! 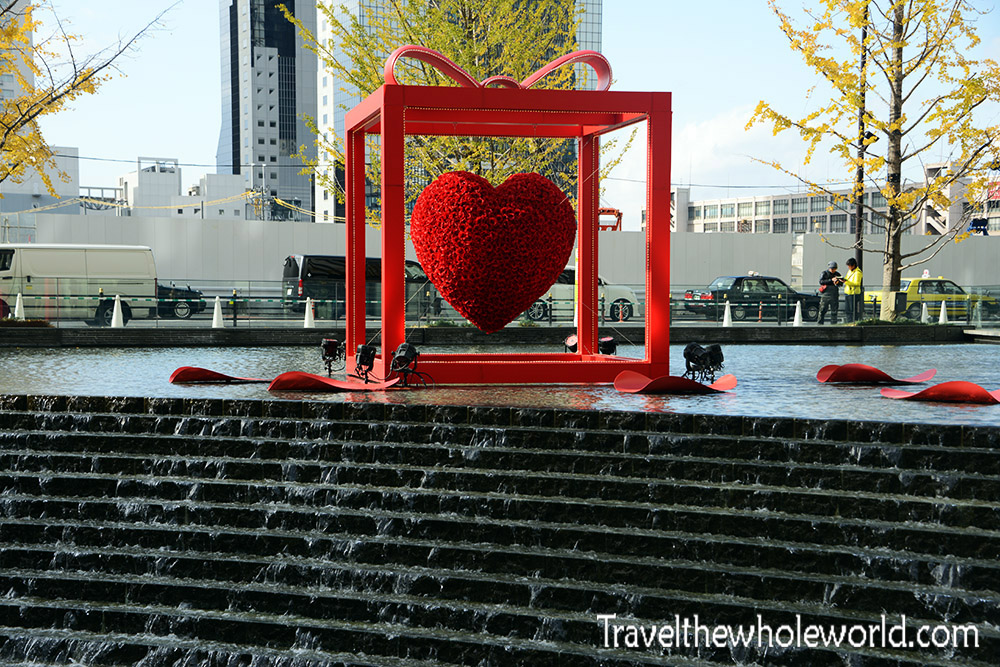 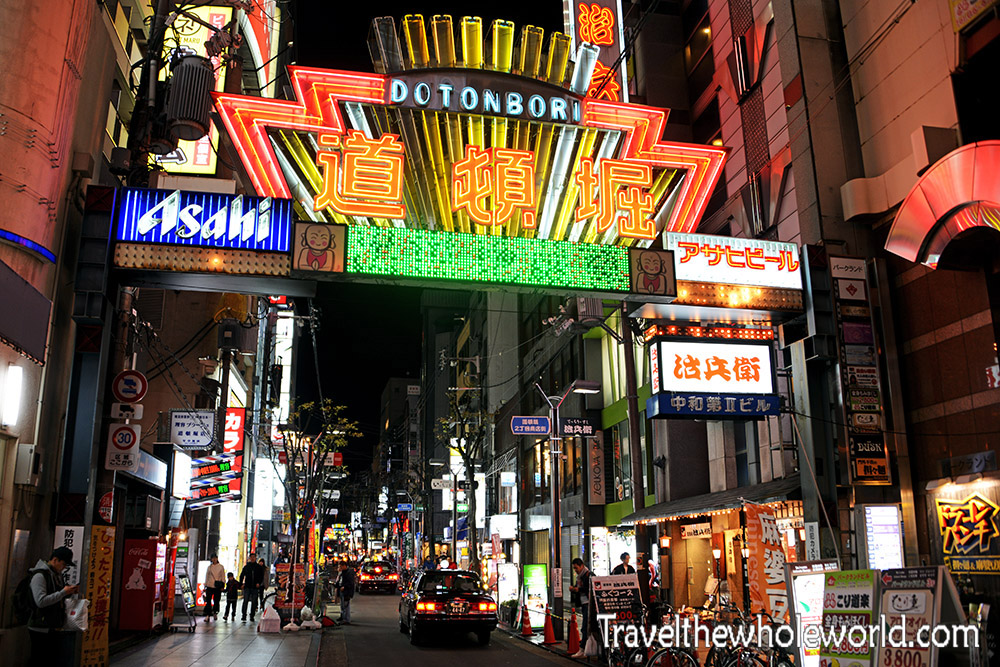 The most popular part of Osaka is Dotonbori, and the photo above shows the entrance to the district. I’m a bit embarrassed for having been to Japan more times than I can remember, and having never heard of Dotonbori until I showed up, but it was definitely a pleasant surprise! 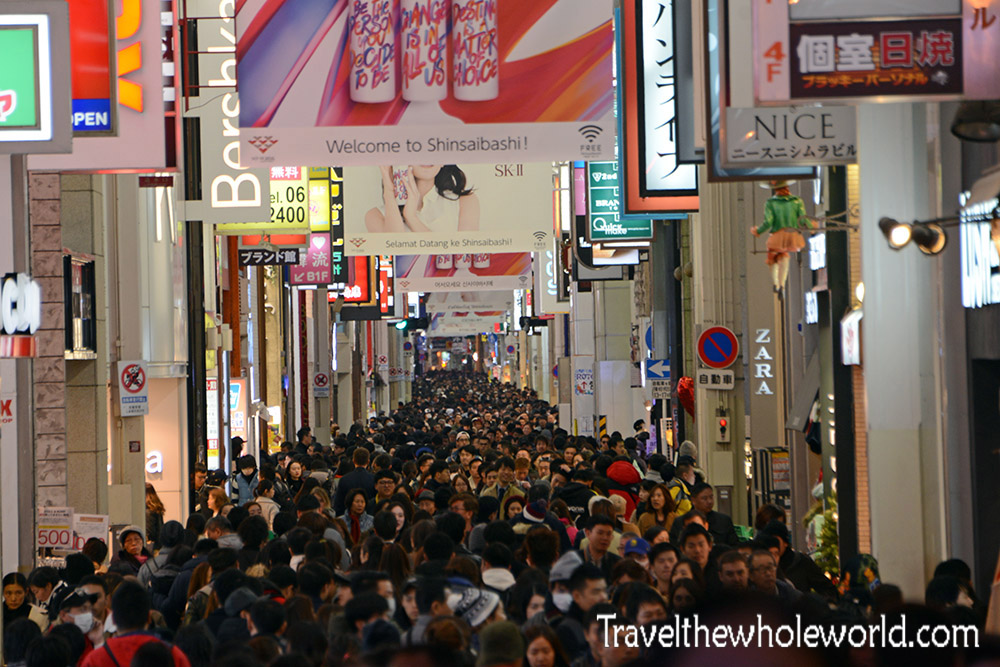 So this photo probably looks like a big contradiction to what I said about being crowded. Dotonbori is the most popular place to visit in Osaka, but the rest of the city is much quieter in comparison. The heart of Dotonbori is photographed above, and had some of the most crowded streets I’d ever seen in my life! This is pretty much the main entertainment district of the city, where you can find all the restaurants, shopping, night life, and unique attractions the city has to offer. 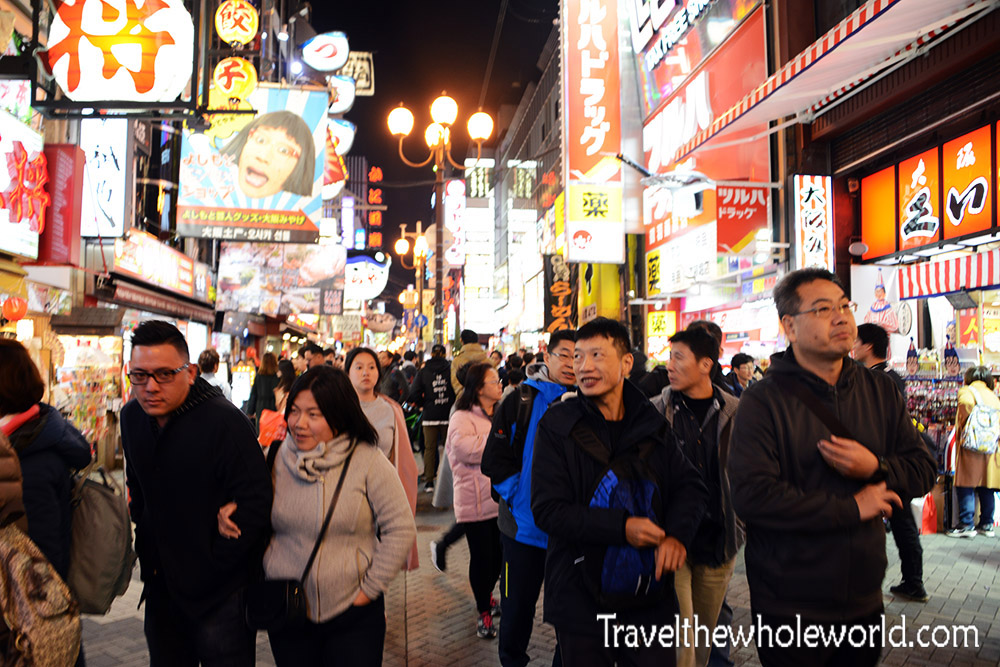 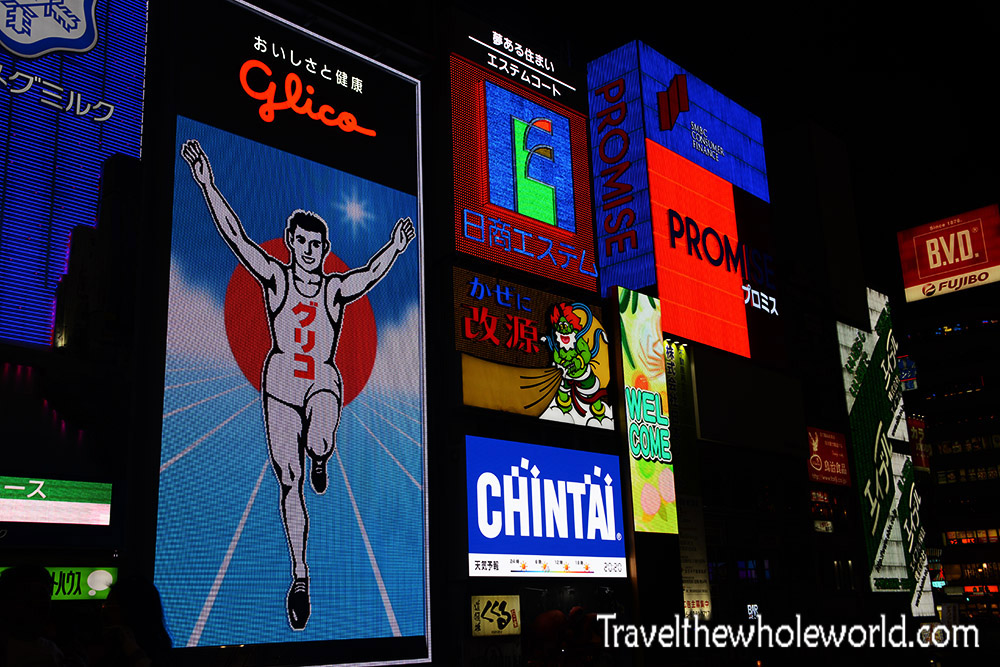 I didn’t realize how famous Dotonbori was until I visited Osaka. It turns out to be a pretty big deal, not just in Osaka but the entire country. Dotonbori is also famous for several of its advertisements, some of which have been famous for decades! The Glico Running Man photographed above has actually been around since 1935! Of course back then it was a poster, but throughout the past century the running man has been upgraded to newer technologies, and some slight changes made to reflect current events or cultural trends. Even the giant crab below is one of the famous icons in Osaka. There are at least a dozen of these throughout Dotonbori. 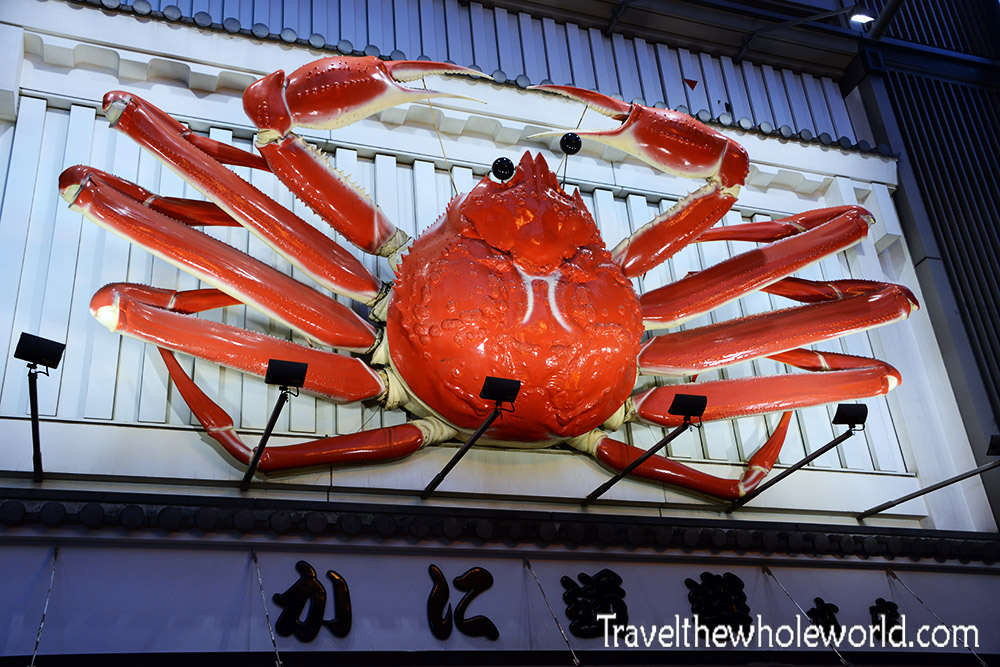 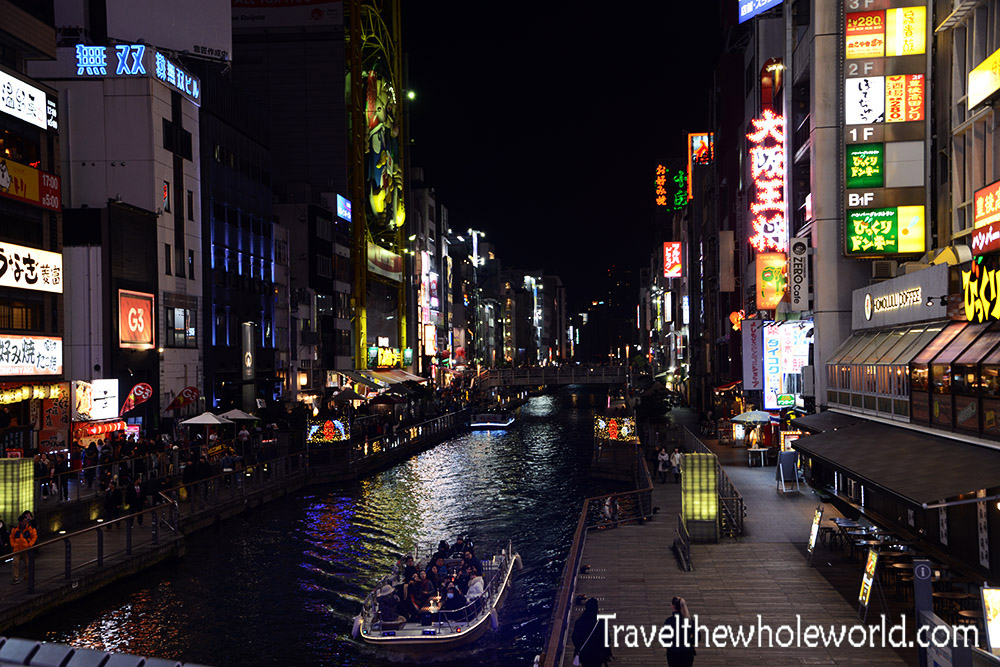 I’m normally not a fan of super crowded places, but it’s hard to not love Dotonbori. It’s one of those places where you have way too many places to choose from, and just walking around the city is a fun experience. At night is the best time to visit, because all the city lights come on and you can see how lively Dotonbori is. The photo above shows the artificial canal that Dotonbori was built around. The canal actually began in 1615 CE, by a man named Doton from which this entire neighborhood is named after. His intent was to help build a canal to encourage commerce, and I think it’s safe to say he was successful! 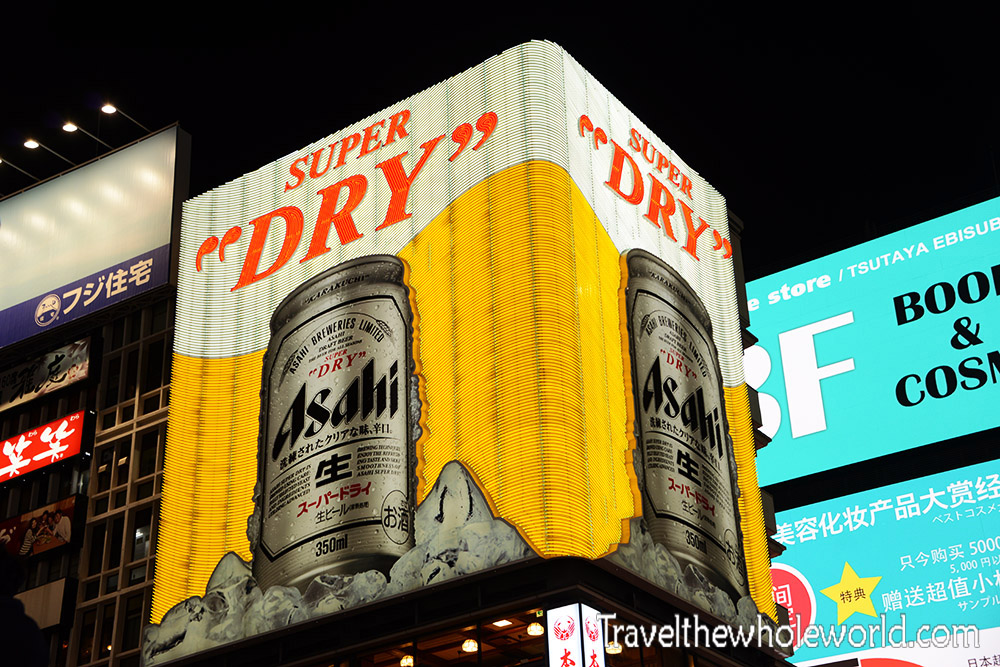 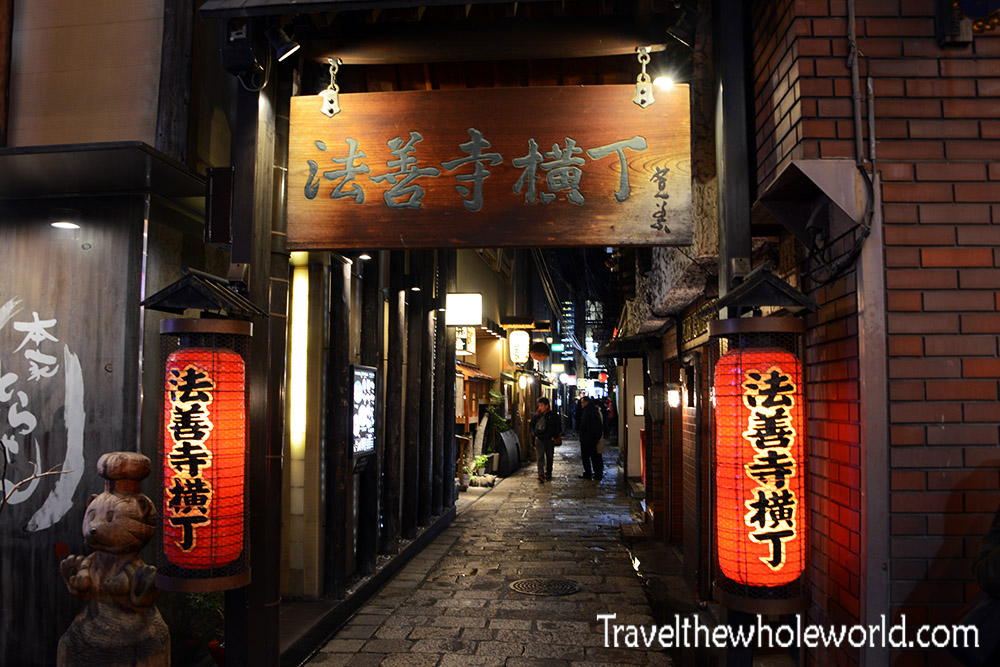 Some of the most famous restaurants in Japan are located in this part of Osaka. This alley above is lined with some traditional Japanese restaurants, but nowadays you can find a fair share of international cuisine as well. Although Dotonbori is completely modernized it still retains some old traditions as well, such as the temple below. 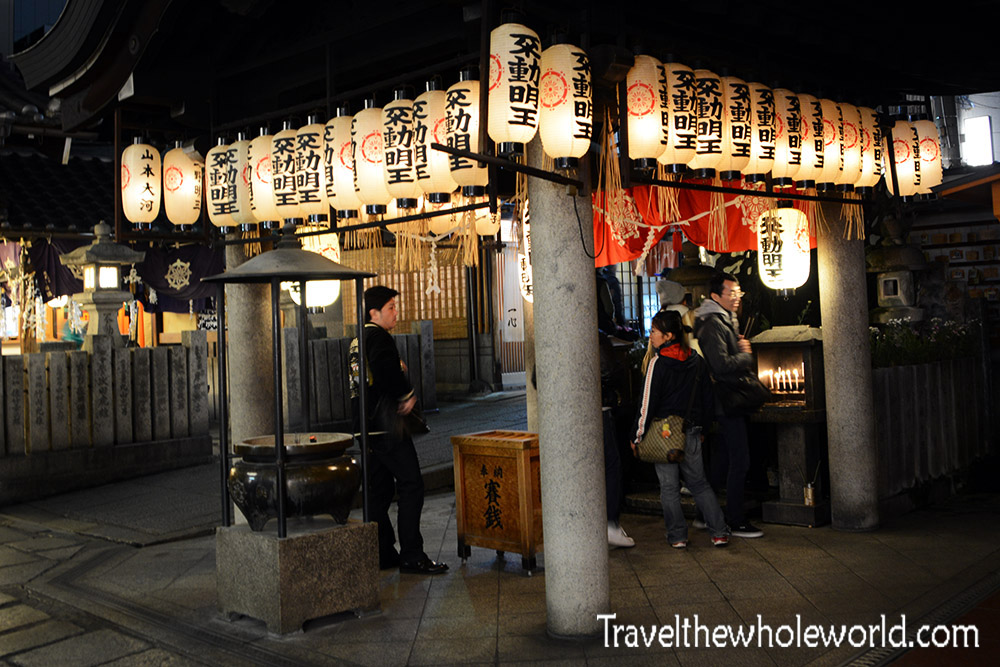 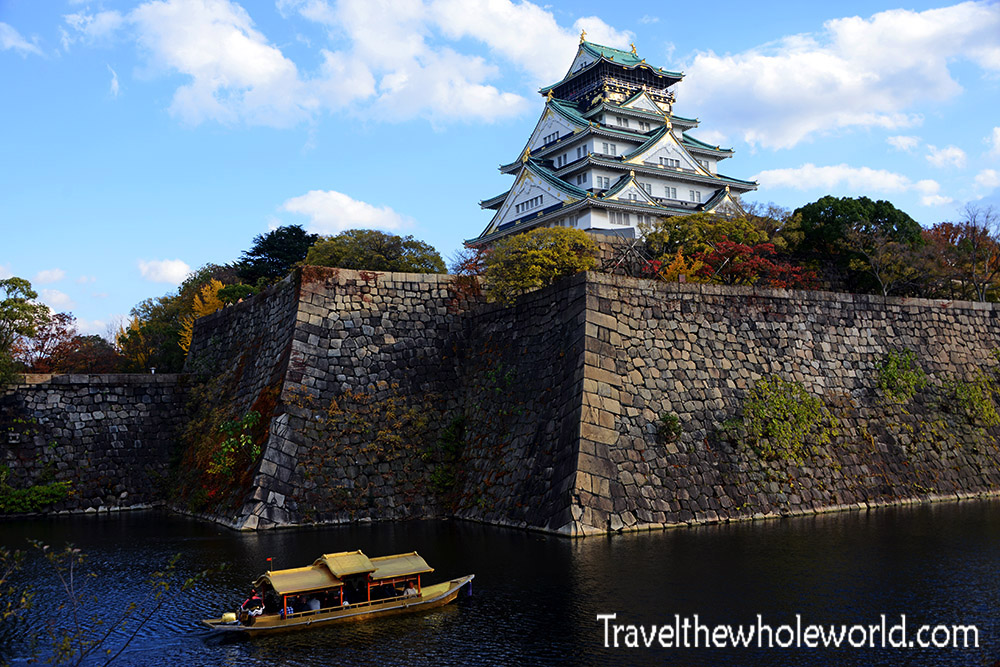 After Dotonbori, the next famous place in Japan’s ancient capital is Osaka castle. Osaka castle is a few hundred years old, and said to be one of the most beautiful castles in the country. That statement at least holds true to the two other major castles I came across in Japan. What makes Osaka castle so beautiful is not just the castle itself, but the beautiful moat and gardens that surround it as well. It’s a fairly large area with plenty of options to explore. Although nearby Kyoto is known for its Geishas, you likely will spot a few here in Osaka castle as well. 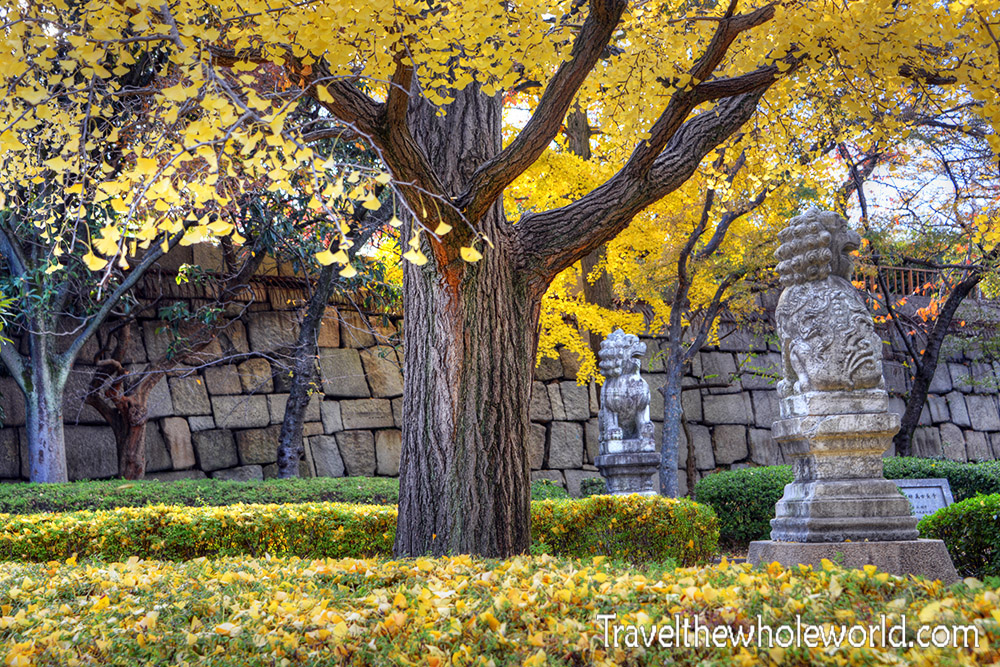 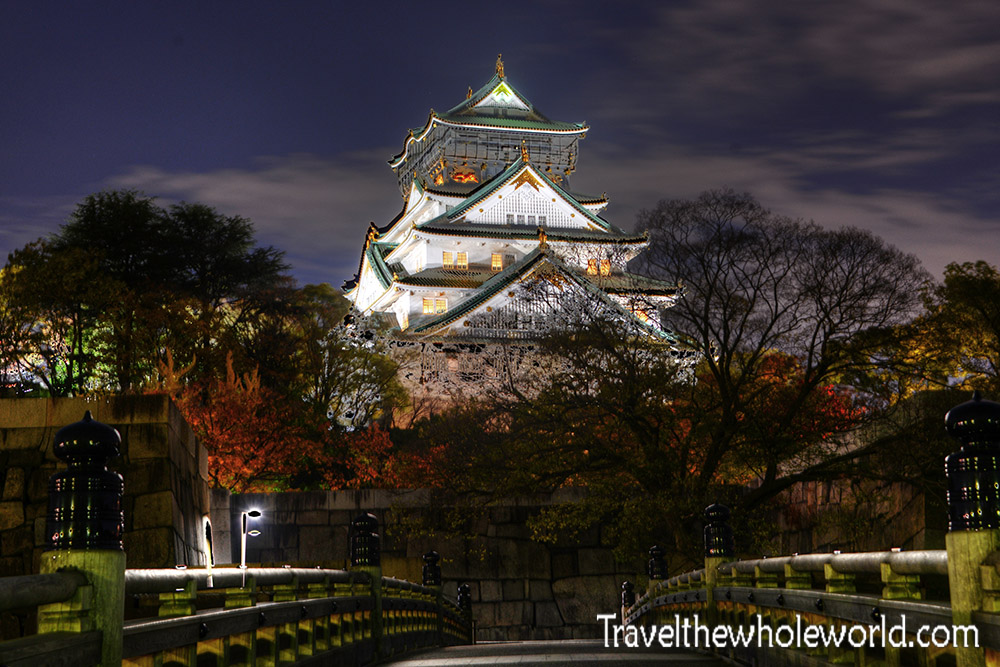 I visited Osaka castle multiple times, but favorite was always at night. The castle was lit up, and with the fall colors and a perfect night sky it was definitely surreal scene. This photo above is an HDR shot I took while approaching the castle on its main bridge. This photo below is another HDR shot I took from a vantage point on one of the castles balconies. You can see the castle is surrounded by trees and gardens, and it’s definitely a must visit while in Osaka! 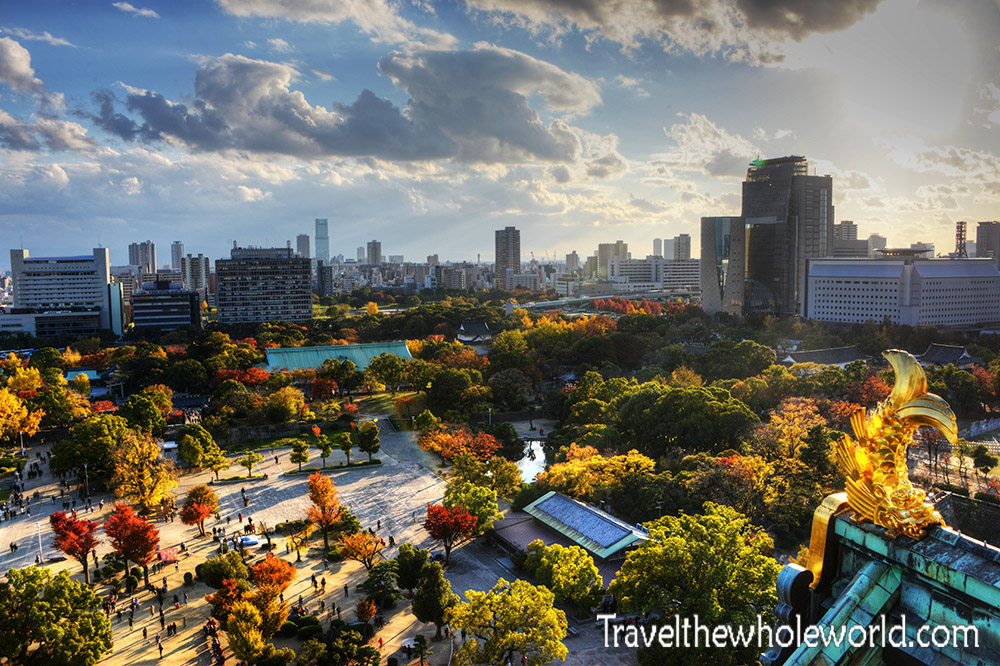 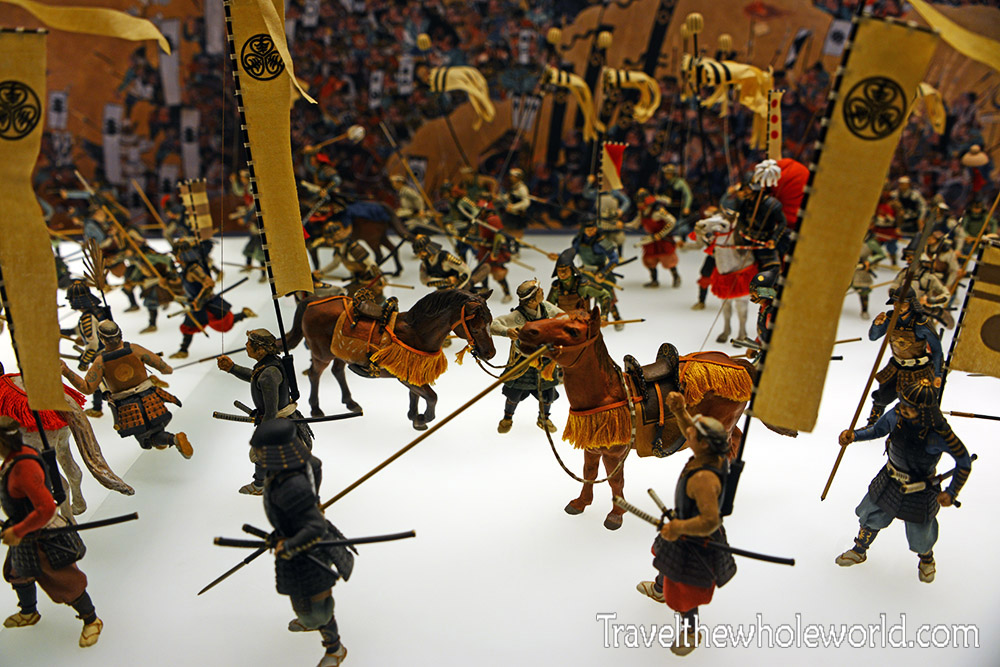 The interior of Osaka castle has been changed into a massive museum. There are dozens of stories here, but none are as famous as the seige of Osaka, which lasted from fall of 1614 to the summer of 1615. The ruler of Japan, known as the Shogun essentially controlled the entire country except for the Osaka region. The Toyotomi clan built the castle in 1583, and remained the last major resistance to the shogun. After the siege of Osaka, the castle finally fell and the shogun completed rule of Japan. Many of the surviving family members of the Toyotomi clan committed suicide after the castle fell, and the victory by the shogun resulted in the end of the clan.
The photo above shows a reenactment of fighting during the battle. 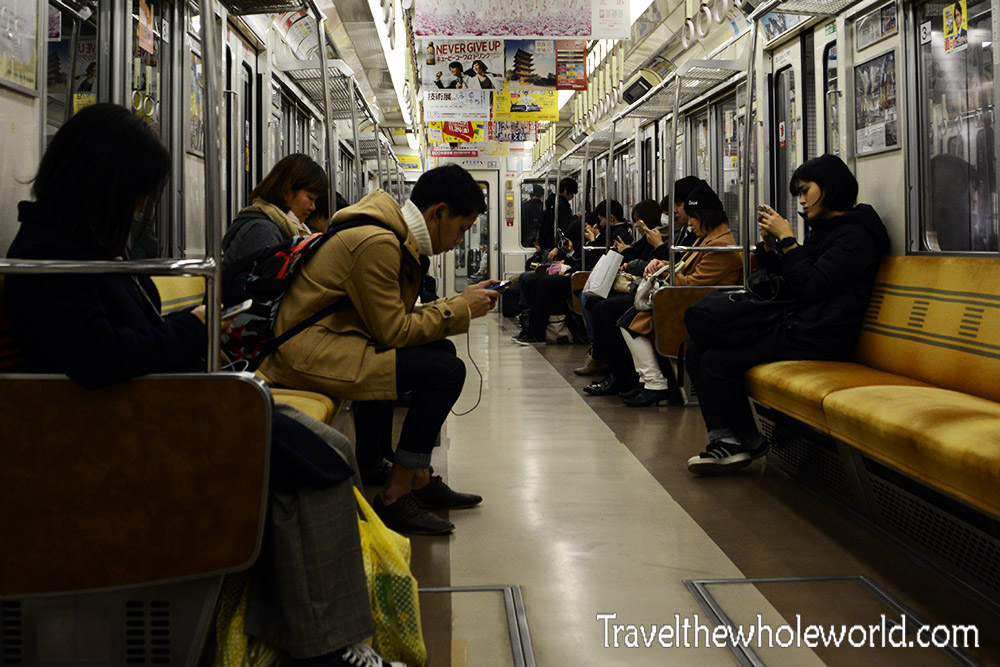 Dotonbori and Osaka castle are by far the main attractions in the city. Of course there are endless amounts of things to do here, but for the most part the rest of my trip here was just exploring Osaka and seeing what random places I came across. Here’s a photo of the subway, not so crowded for the second largest city in the Japan! The subway is convenient, but for the most part I walked most places in the city. Below is a photo of some Japanese schoolkids I passed by. 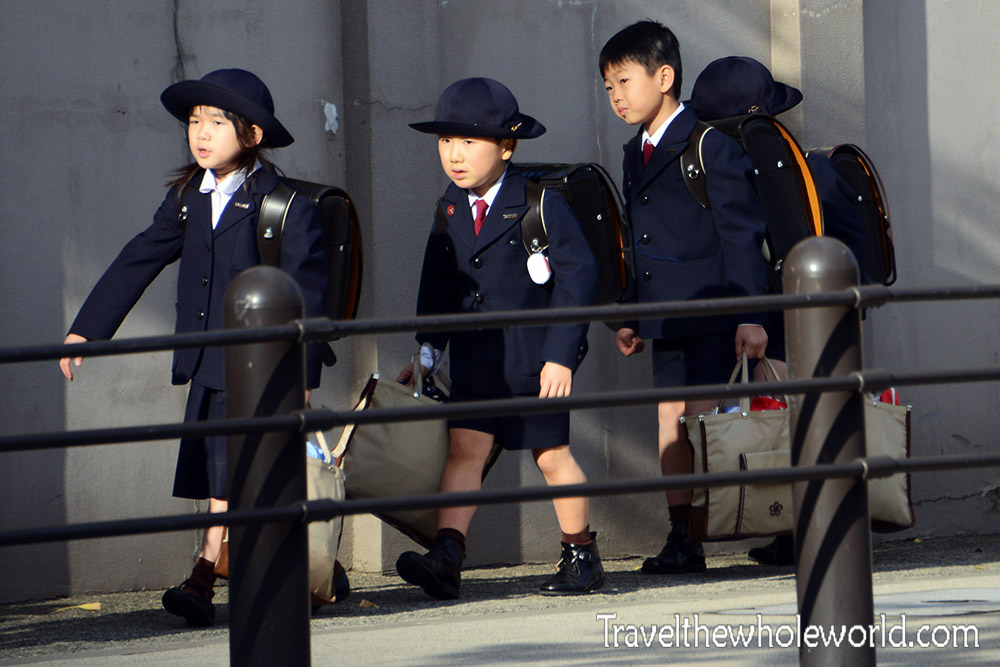 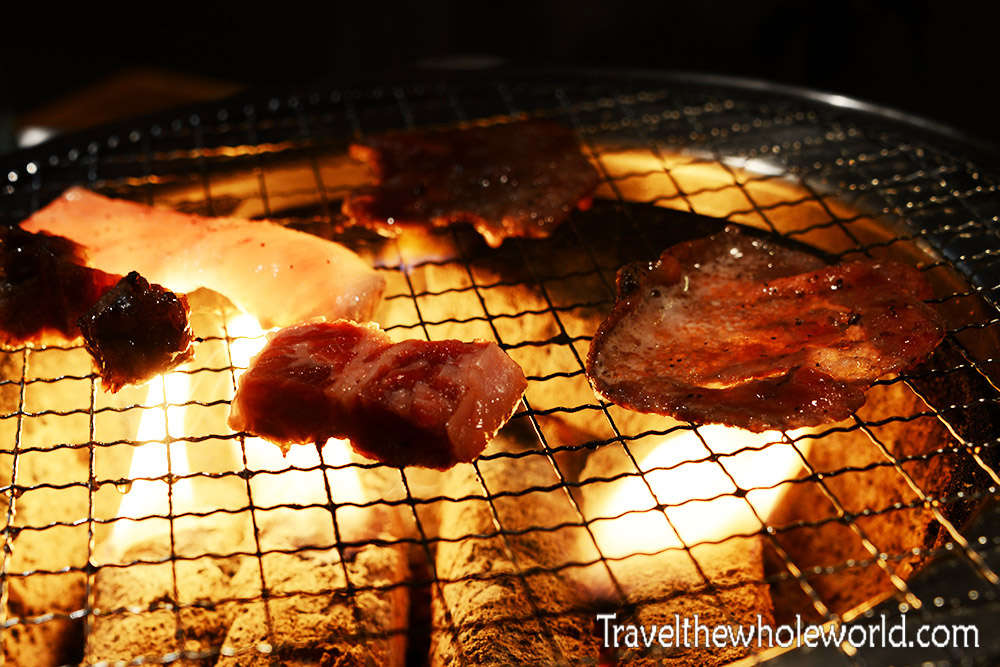 I don’t usually post photos of food on my site, but the food in Japan is so unique I felt obligated to share. The Hibachi fire grills are some of the most famous Japanese foods and by far my favorite. Food stands aren’t as famous internationally, but in Japan they are everywhere and almost always have a long line. I forgot the Japanese name for these, but they are type of rice based, and were another one of my favorites. 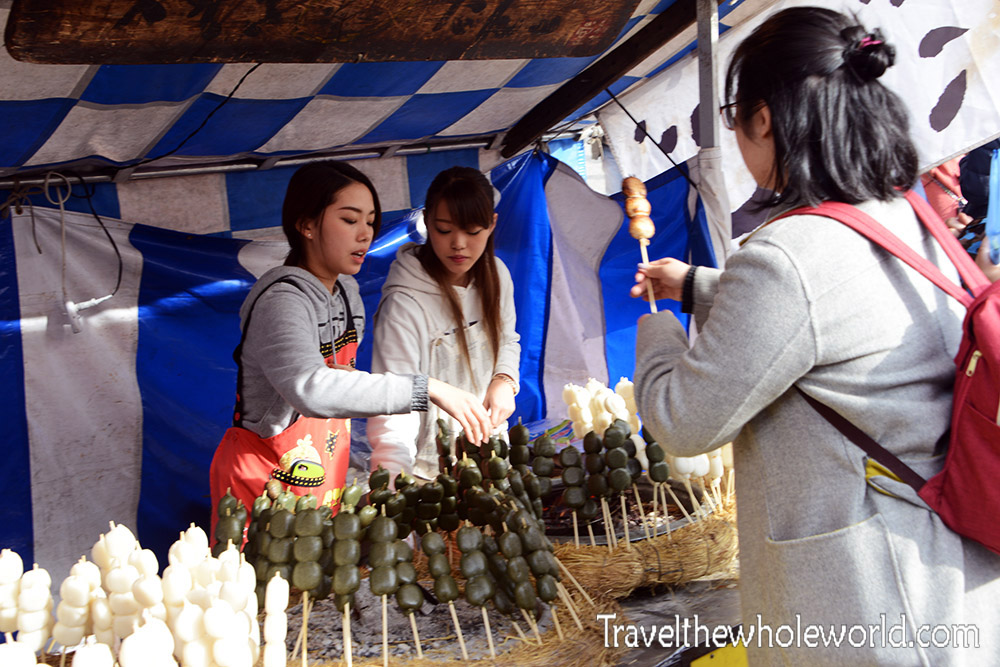 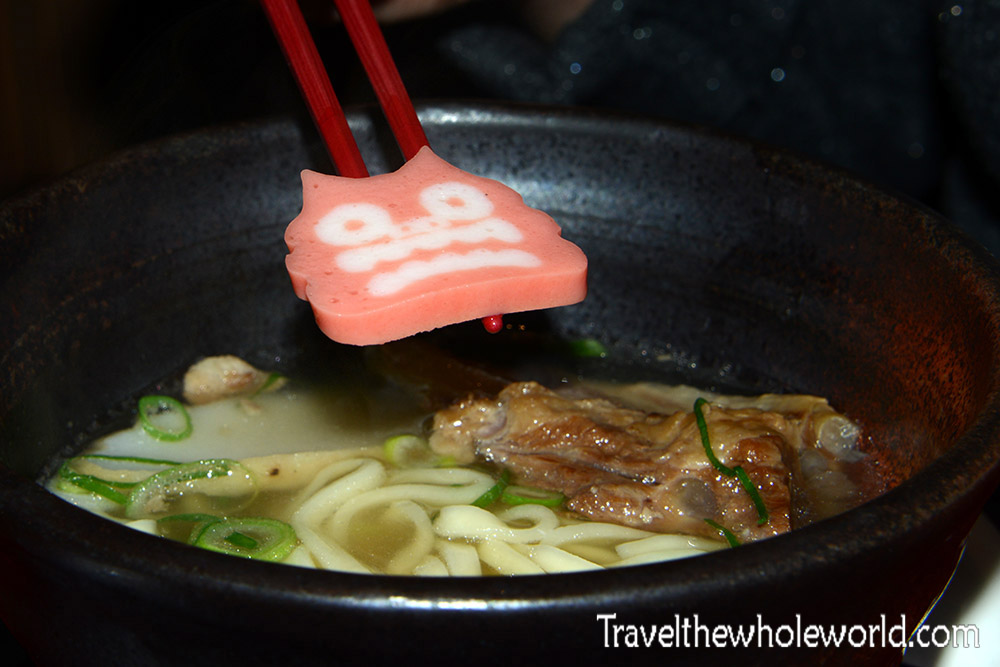 Japan takes their food very seriously, and it’s usually the standard to have an impressive presentation. This goes from sushi, to steaks, or even this lunch I had! 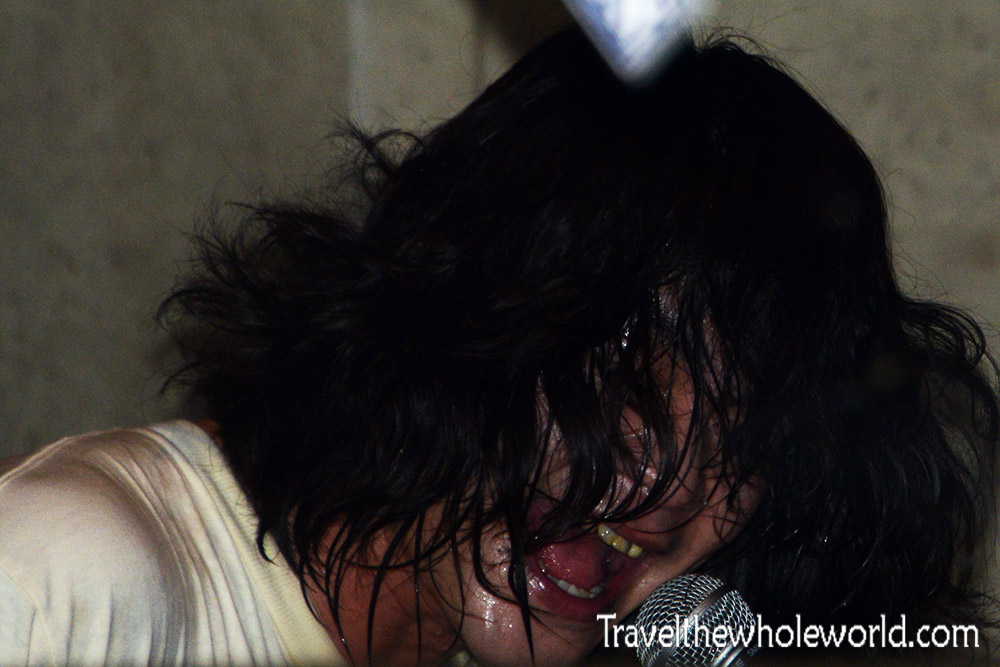 During one of my walks, I came across several karaoke bars. This guy was right by the front window and had no shame jamming out in front of people! I nearly had a heart attack when I worked for a Japanese company and had to do karaoke for a work event ten years ago. 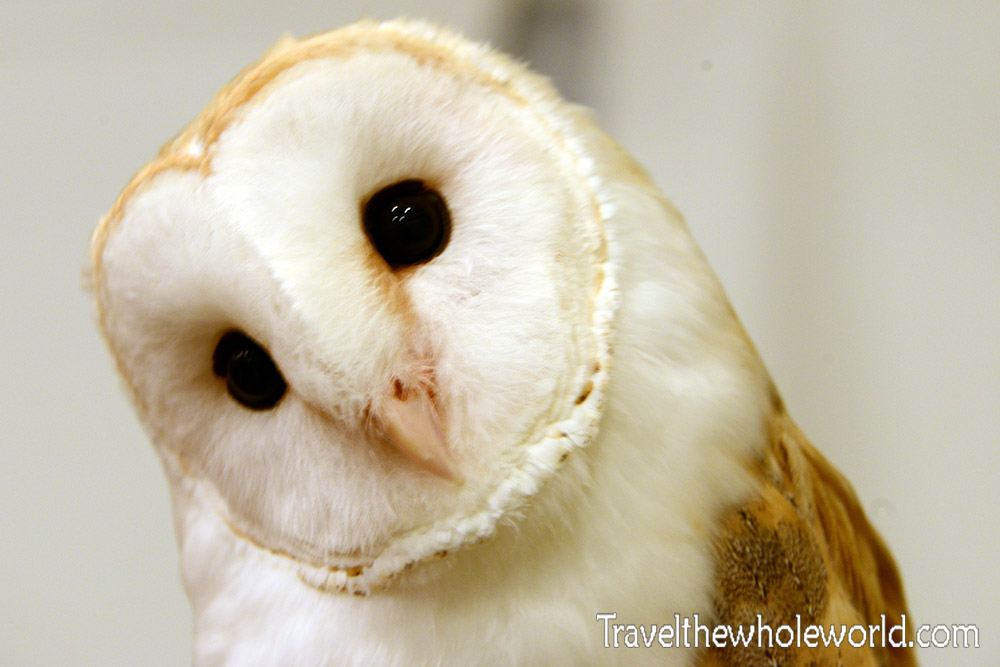 One last thing I did in Japan was visit an owl cafe. There are a few of these throughout the country, and a few years ago cat cafes seemed to be becoming popular back home in Washington DC. The owl cafe might make you belief that you’re in a real cafe or restaurant, enjoying some beers and full meals. In reality though, the cafes are rooms where the owls are kept, and you can get up close and personal with them, even have some stand on your head or shoulder. The cafe section is a tiny area that’s roped off where you can have a cup of tea or so away from the owls. I did have a fun experience meeting these guys, but these were my two favorites. The barn owl above, and this very pensive owl below. What was he thinking? 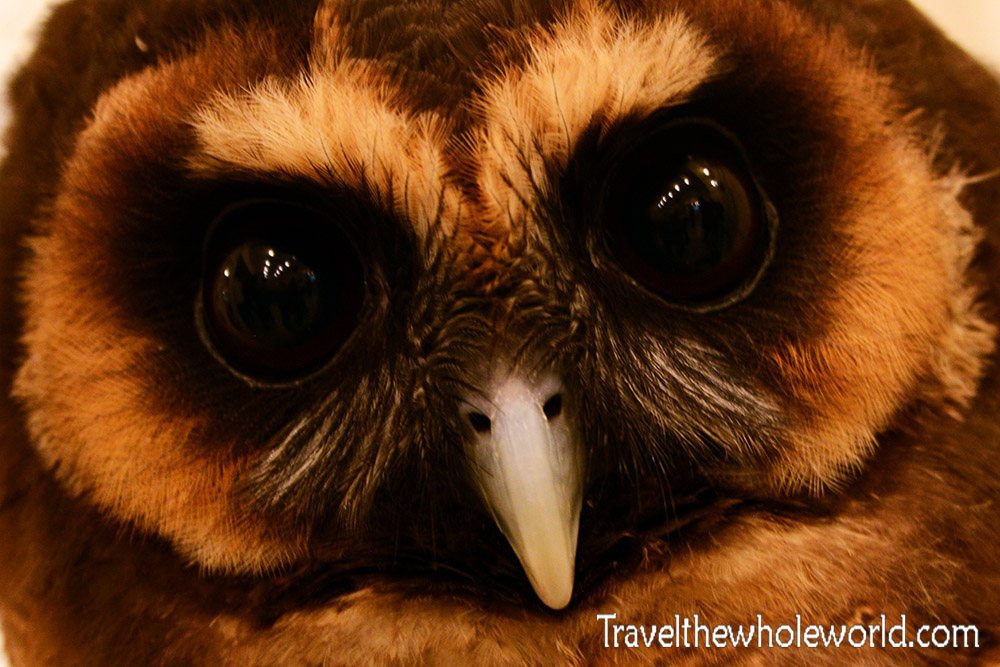