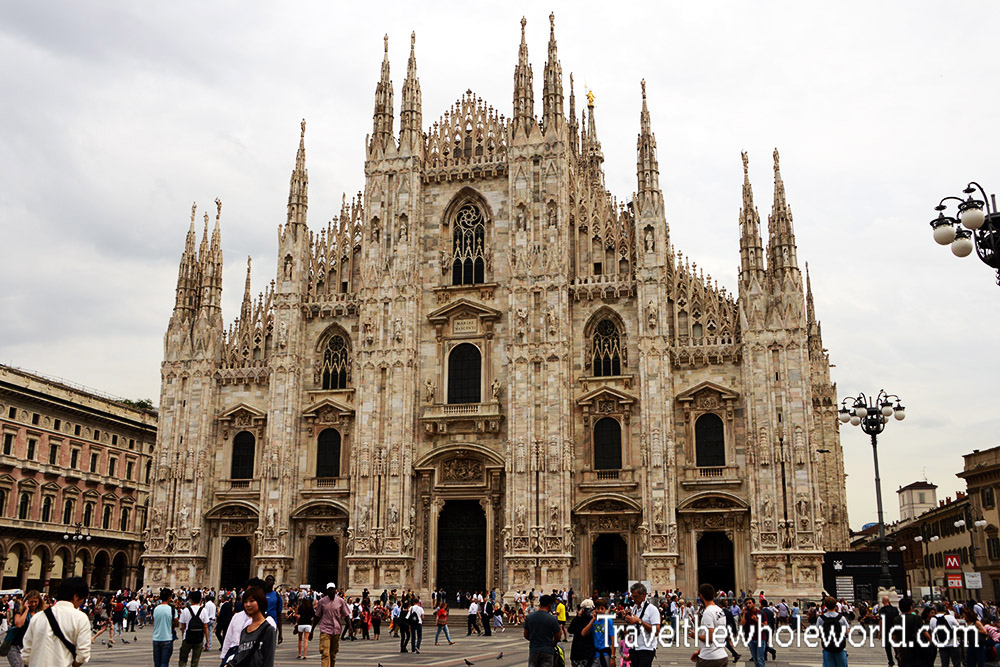 In the late summer I gave a shot at my fantasy of climbing the Matterhorn, a dramatic looking peak that sits on the border of Switzerland and Italy. Since flights to Switzerland were much more expensive than Italy, I decided to take a detour to Milan and from here take a train to Zermatt. Initially I didn’t have any plans to visit Milan, but since I was already here I ended up spending a fair amount of time exploring the city. My first photo is of one of the most famous landmarks in Milan, the Duomo Cathedral. 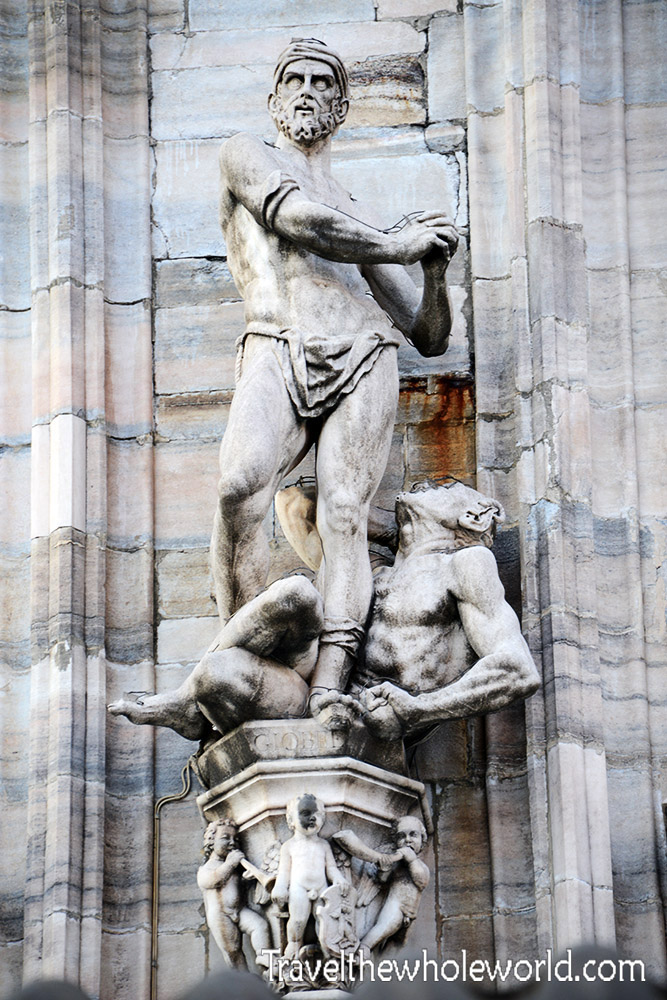 I didn’t go inside the Duomo Cathedral and now I realize what a mistake that was! There I was standing in front of the largest church in Italy and the fifth largest in the world, and I didn’t make it inside. I think I was taken back by its beauty on the outside and overlooked getting in line. It goes without saying this is one of the most amazing religious structures on earth. The history dates back to the ground breaking in 1385 to its official completion a short 600 years later in 1965. There’s an incredible amount of detail in the cathedral. Above shows some of the statues that appear on all sides of the Duomo. Since I didn’t summit the Matterhorn due to bad weather, there’s a good chance I’ll return to Milan and this time make sure I enter the cathedral. 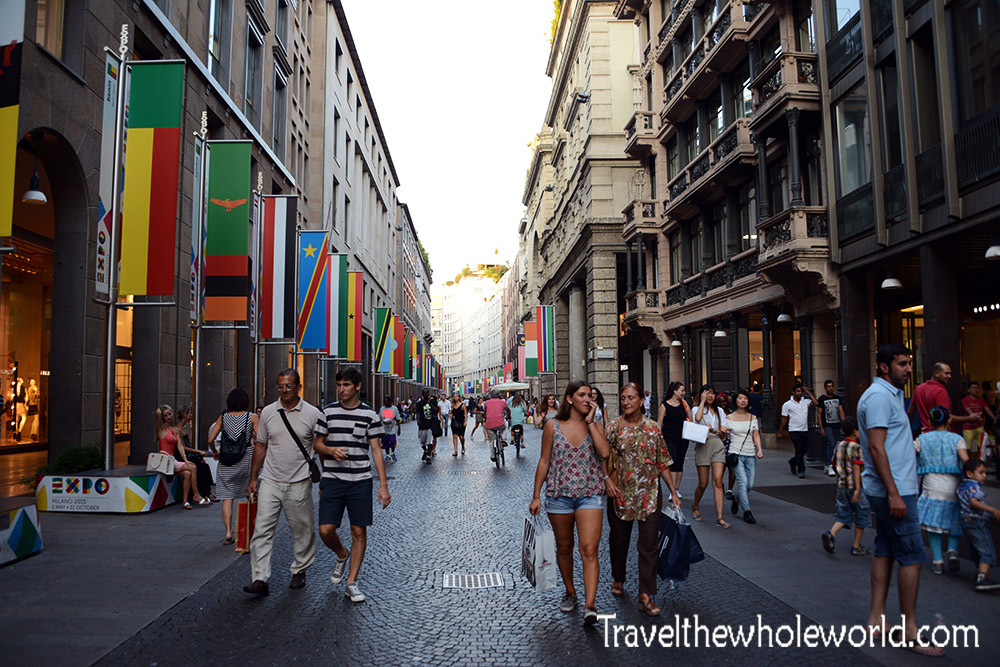 The Duomo Cathedral is located in the heart of Milan. This area of Milan is made up of several cobbled streets that are lined with restaurants and shops. There’s a ton of people here and it’s a very lively area. Many of the buildings are historic with a mix of modern buildings as well. In the photo above you can see some of the busy pedestrian streets in Milan, with one of the city’s large fountains below. 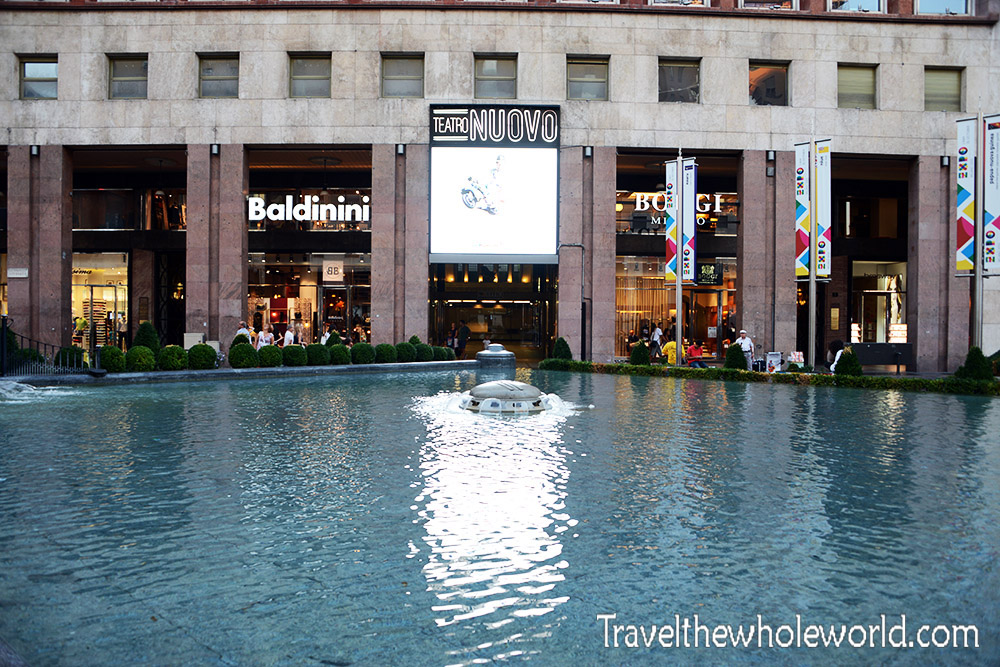 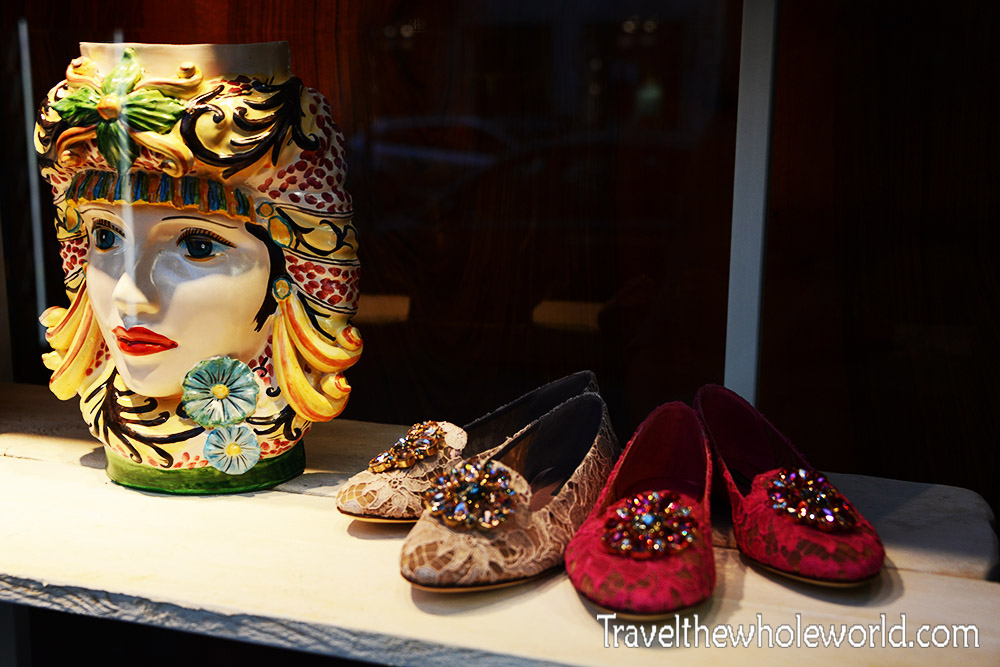 Most of the shops in downtown Milan seemed to be upscale clothing and home decor stores. I didn’t check out the prices but my assumption is they are pretty expensive. These two photos show some of the clothing shops and I saw while walking down one of Milan’s main streets. 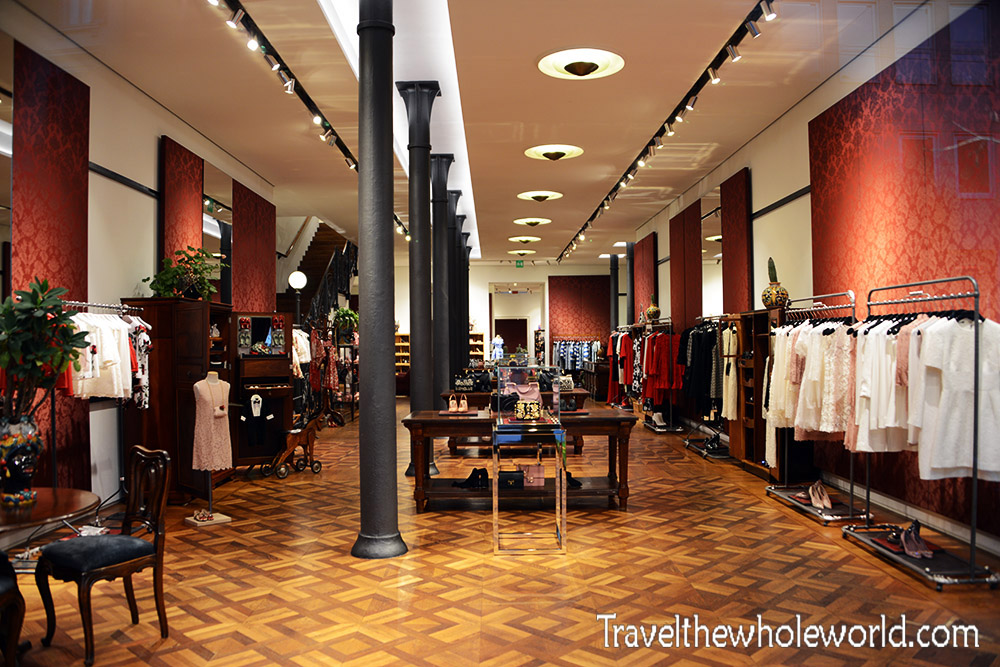 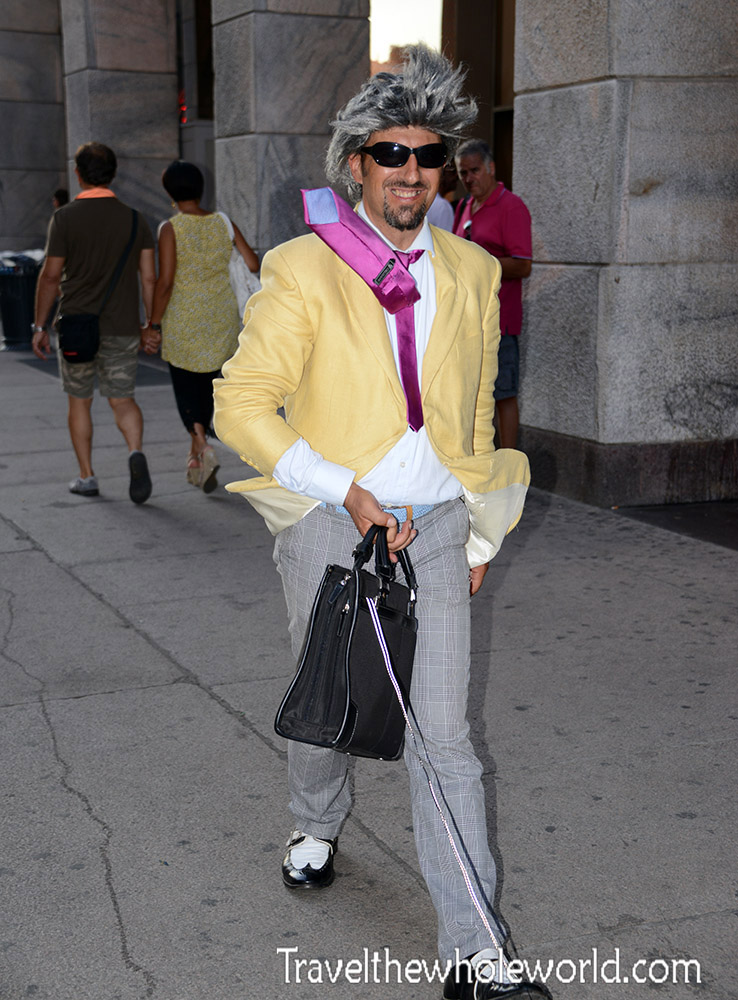 These last two photos from the downtown area shows some of the street entertainers. With lots of foot traffic you’ll come across several entertainers on nearly every block. This guy above seemed to have an angry resting face, until I dropped a small tip in his jar and then he was all smiles. Perhaps he was mad that the genie below was getting all the attention. 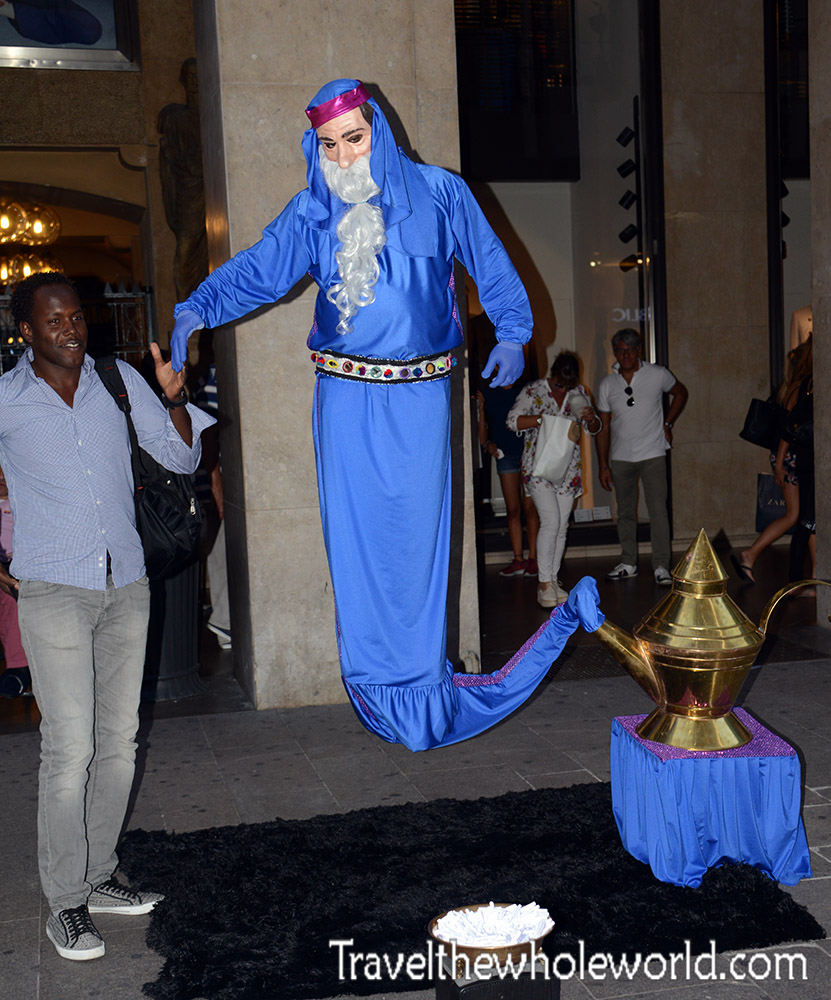 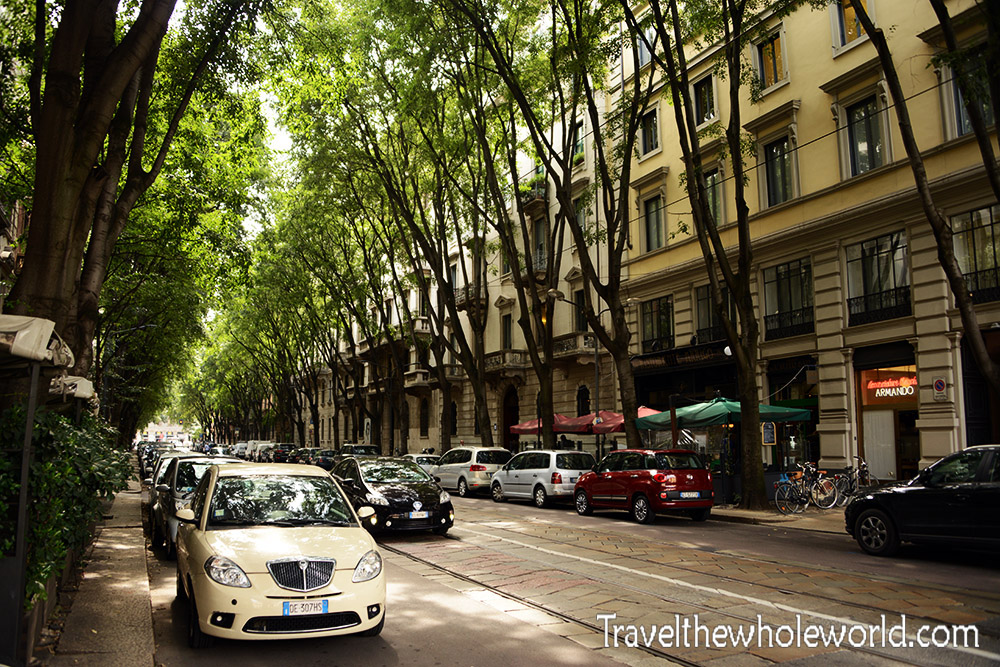 Milan is a beautiful city with several distinct neighborhoods. This one with the tree lined streets was my favorite. It reminded me of Mendoza, Argentina, and as a matter of fact, if I hadn’t taken this picture myself I would have easily believed it was from the same city. In the photo below, you can see the entrance to some luxury apartments in the same area of Milan. 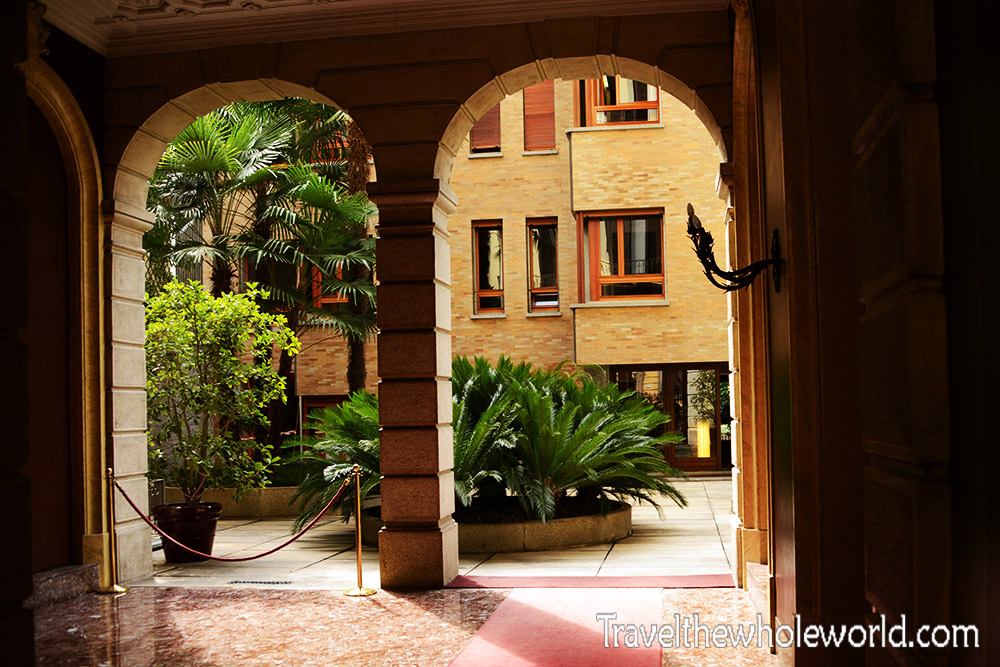 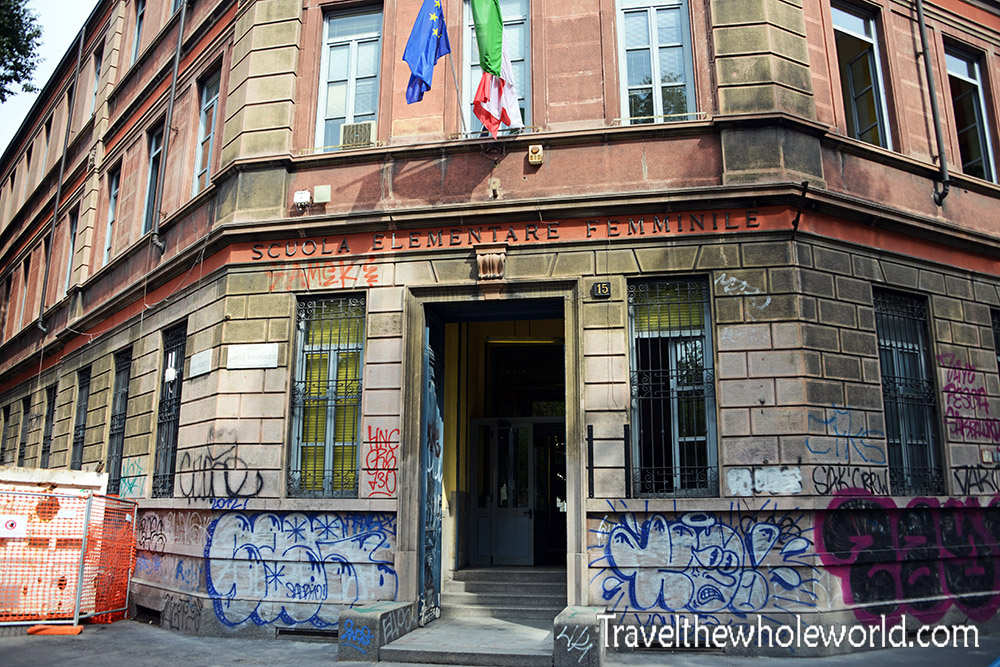 While the vast majority of Milan seemed to be at minimum nice, there was a slight ghetto that I entered. Even here things were relatively clean and I of course had no fears of anything bad happening. I was actually pretty surprised to see that people had decided to spray paint some of these residential buildings. 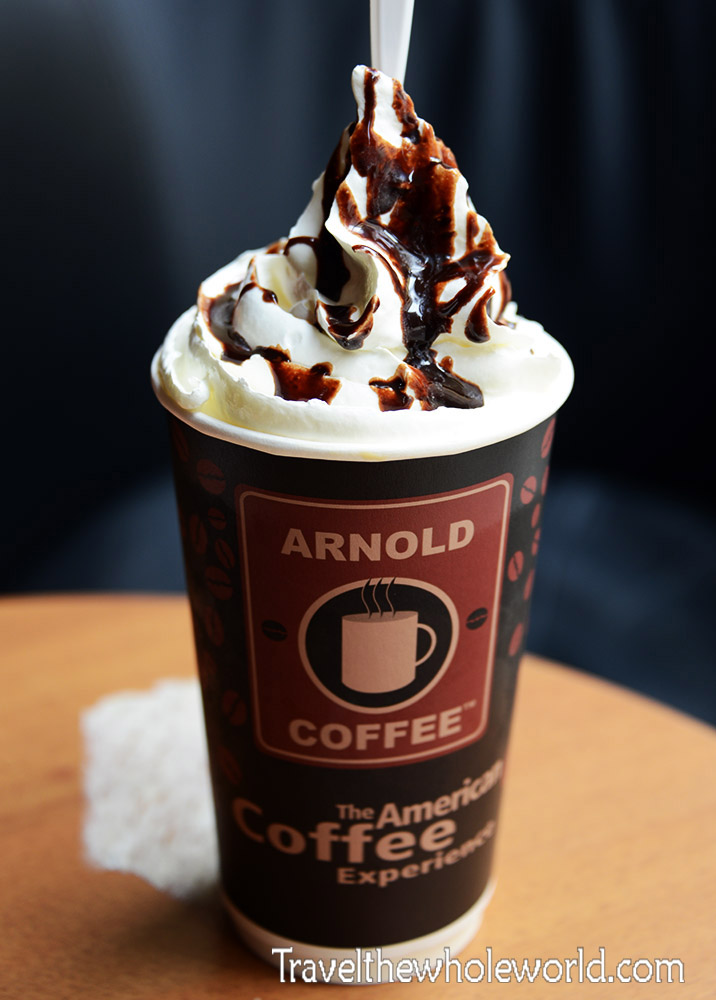 Somewhere during my long walks through the city I decided to take a break and have some coffee. I always feel like Italy is famous for their coffee, so I was surprised to find this American style coffee shop in Milan. I kind of figured they’d be so proud of their own coffee that American coffee would have been shunned. 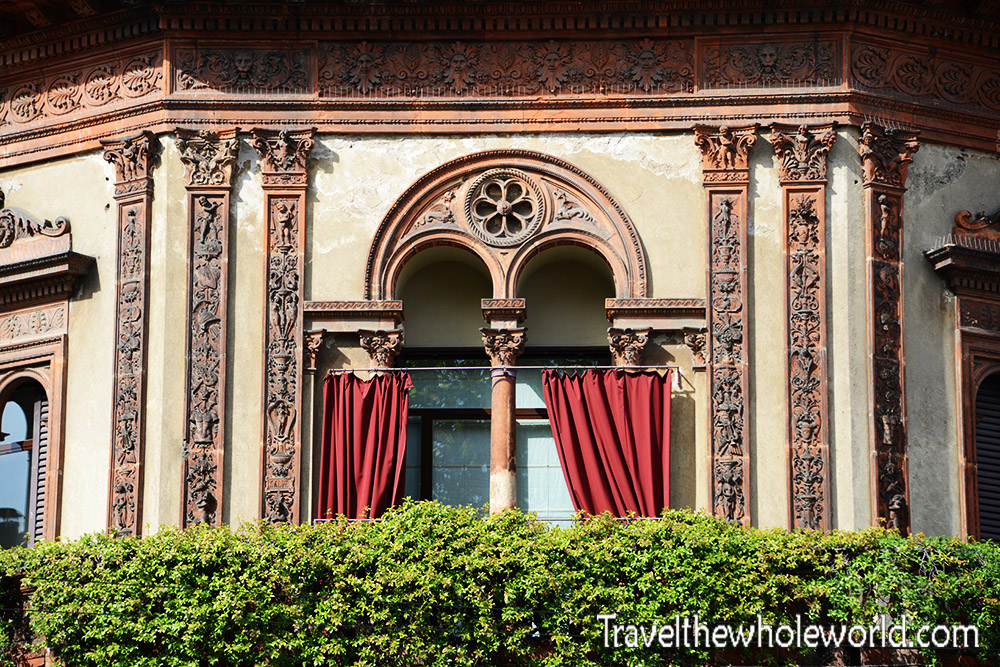 Other parts of the city were older with some interesting architecture. I never gathered what this building above was, but it looked like a ridiculously expensive residence. I saw several other similar styled designs in this same neighborhood. 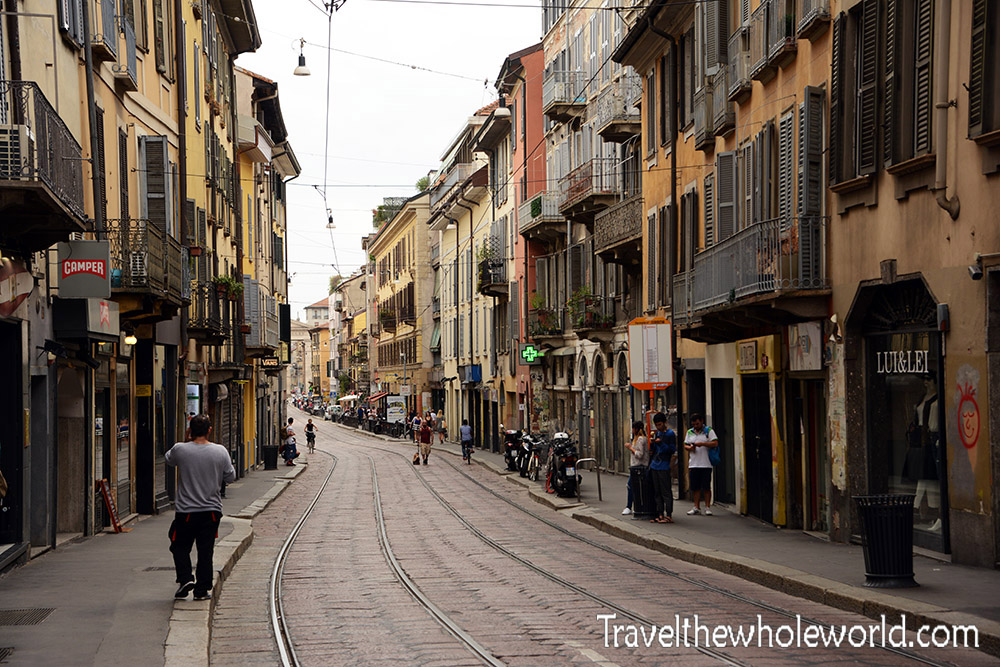 Another favorite area of the city was the Roman ruins. Back in the medieval times, a city wall once protected Milan. In modern times much of it is still standing strong. The photo above shows one of the older streets in the city, while in the shot below you can see a city tram entering through an arch of the old city wall. 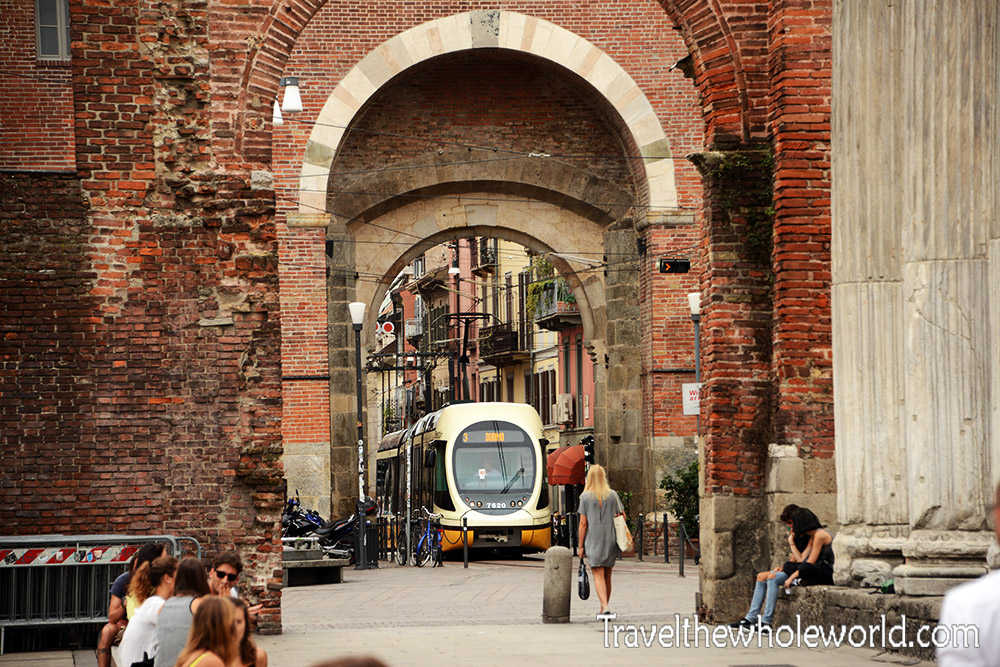 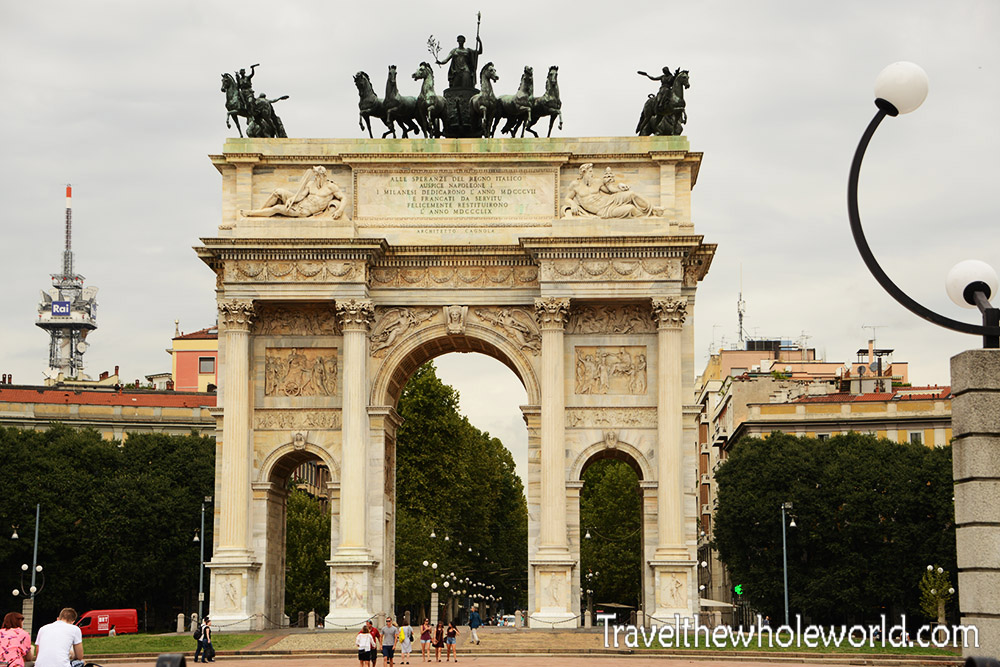 Although not part of the Roman walls, this 19th century gate takes the place of the original Jupiter Gate. The gate has quite a bit of history, with its construction starting in 1807. Due to wars, the construction was delayed for nearly 20 years and wasn’t completed until 1838. 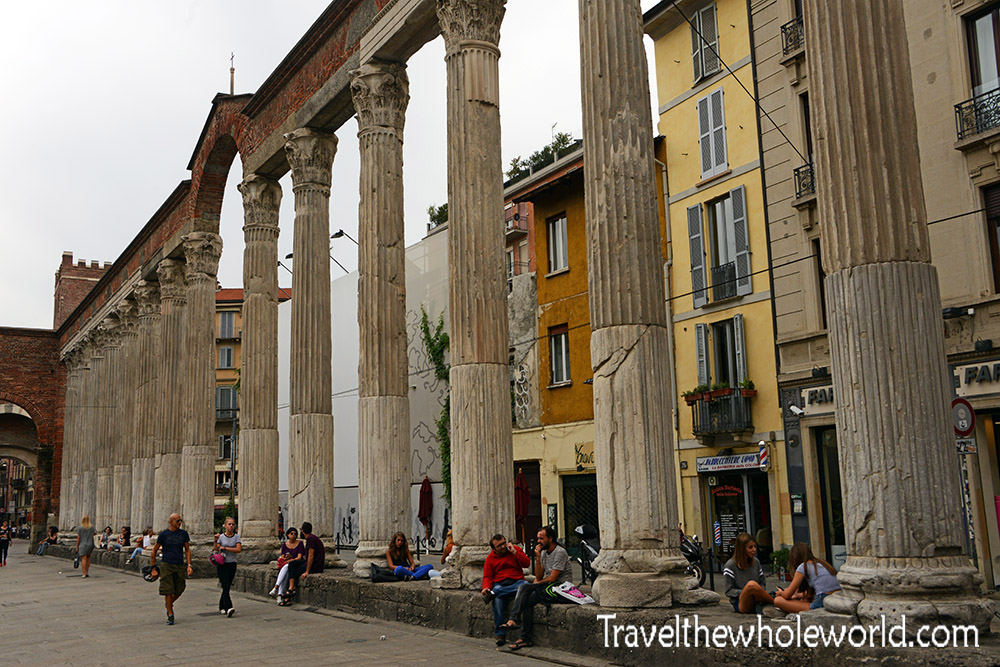 Another famous Roman site is the Colonne di San Lorenzo. These ancient columns were estimated to have been built around the second century and moved to their current location in the fourth century. Colonne di San Lorenzo is made of up 16 main columns, although there are some smaller ones still in existence. It seemed a popular thing to have a chat with friends or sit alone and listen to music between the columns. These girls below were doing exactly that. I don’t think there was an empty seat along the entire row. 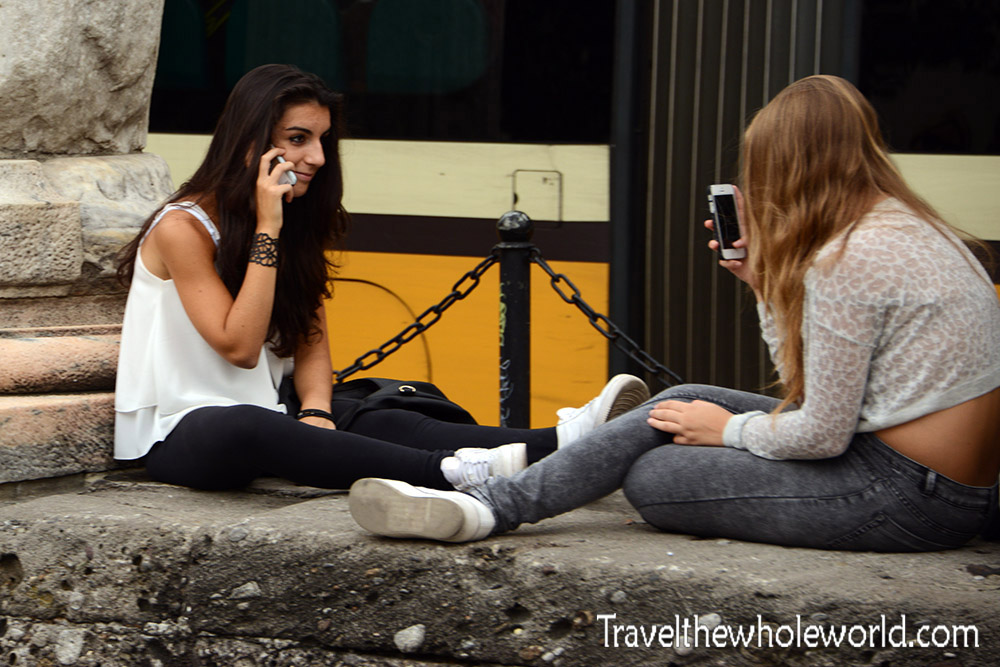 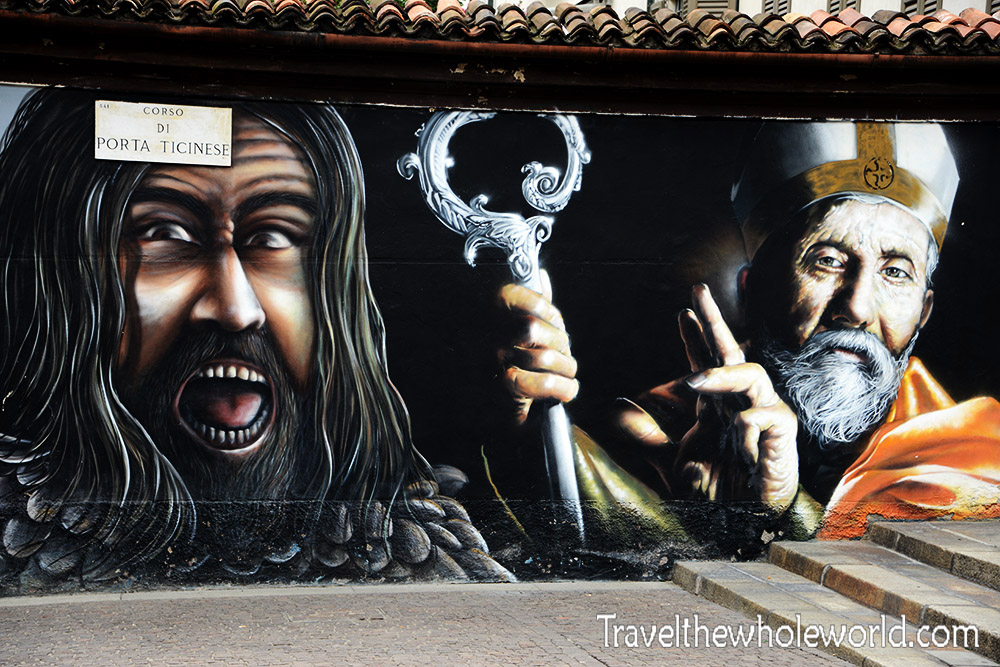 The columns face the Basilica of San Lorenzo, so as I passed the columns I saw this dramatic mural just a few hundred feet away. I did enter and photograph the basilica, but didn’t take any photos worth posting! 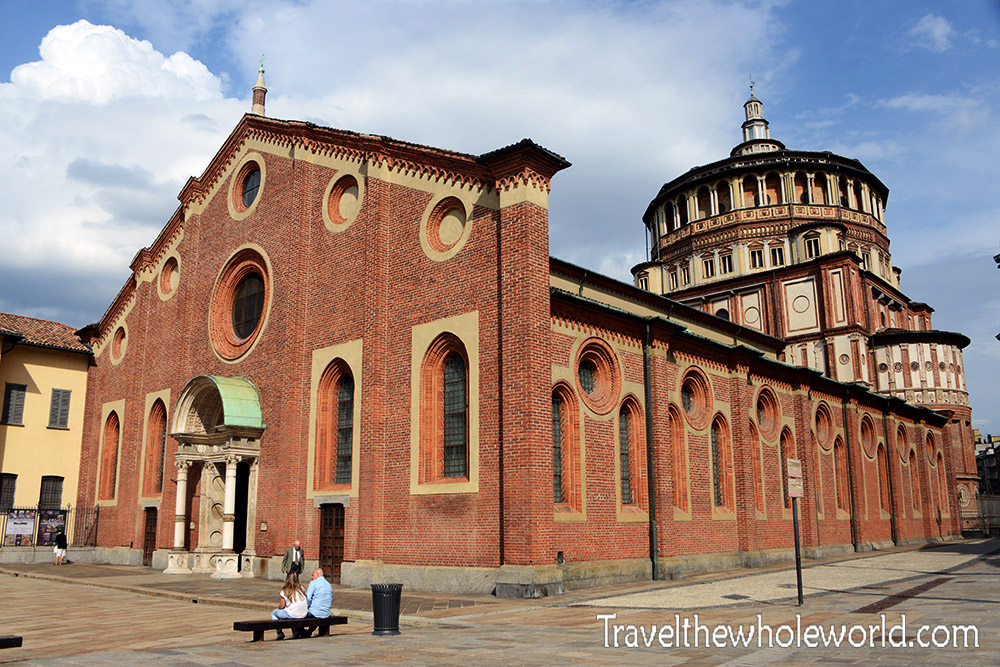 Perhaps one of the most important churches in the world regarding art, is the Santa Maria Delle Grazie. This church is famous for having the Last Supper painted within its walls by Leonardo Da Vinci. Sadly photos of the Last Supper aren’t allowed, so there is no way I can share that. If you want to see you’ll have to visit Milan for yourself. 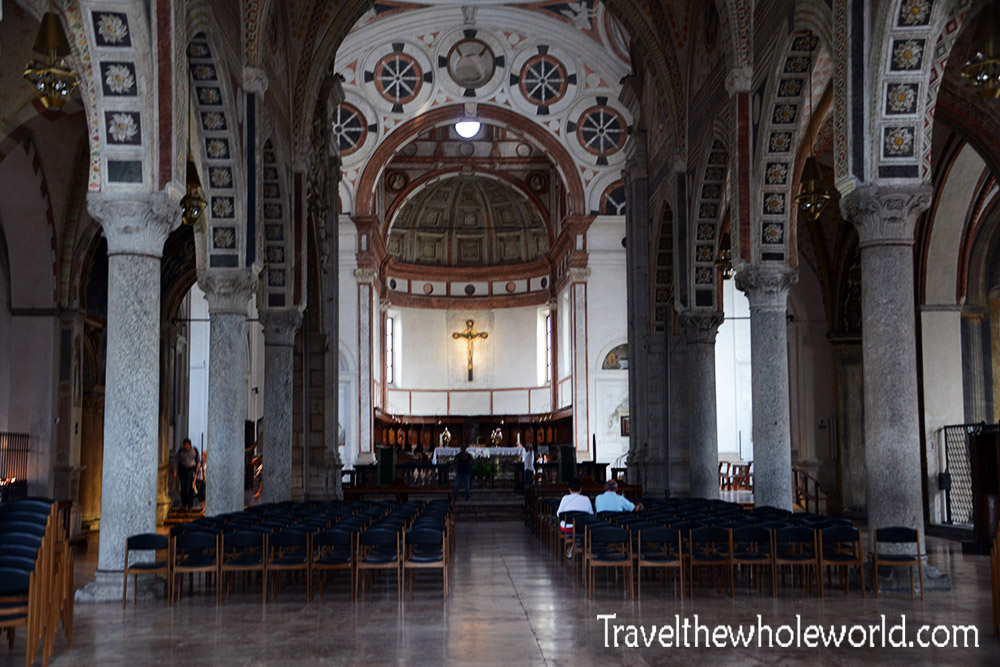 While you can’t take photos of the Last Suppers, photos elsewhere in the church are allowed. The photo above shows the church nave. Below is one of the smaller rooms that houses some artwork. It thought it looked fairly old, but I’m certain it wasn’t painted by Leonardo Da Vinci. 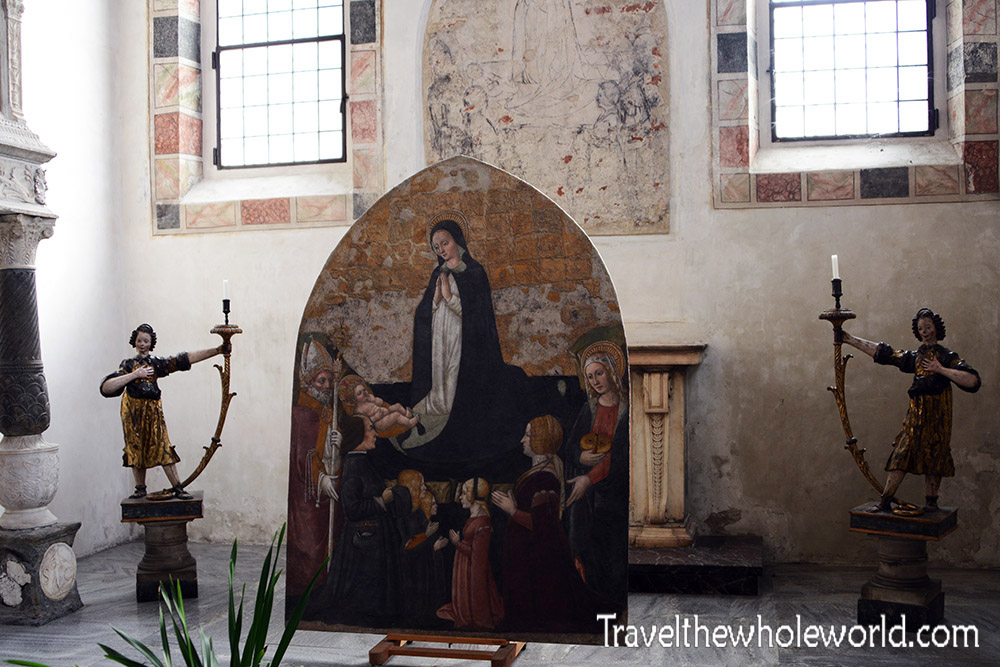 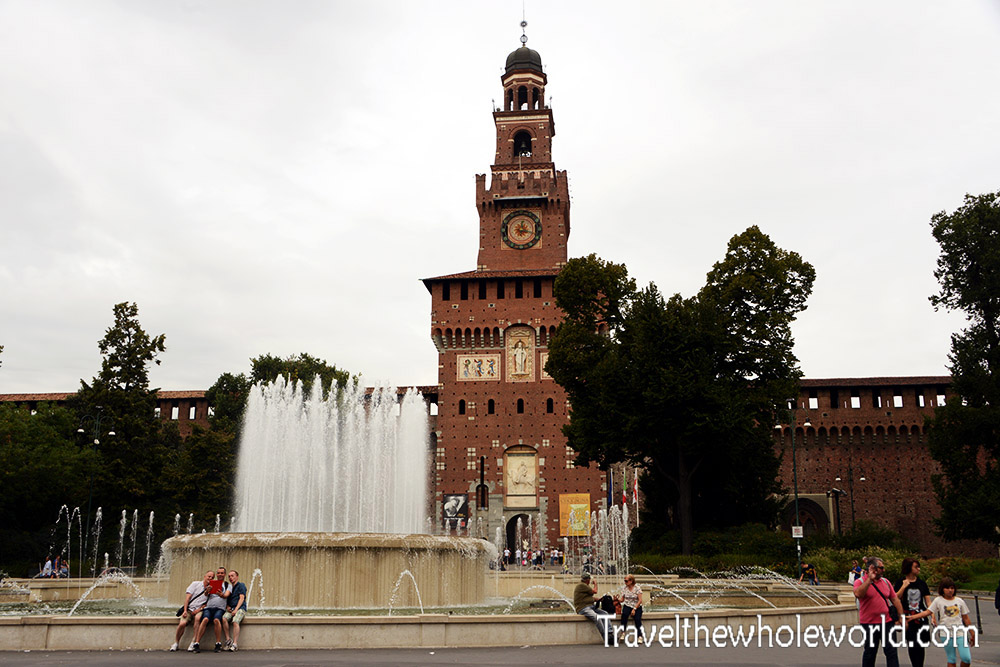 My last photos are from Milan’s Sforza castle. This 15th century castle was once one of the largest fortifications in Europe. It’s definitely one of the largest castles I’ve ever seen in my life Even the massive walls and entrance were incredible. I liked the entrance so much I had to post a rare second photo on my website of it below. 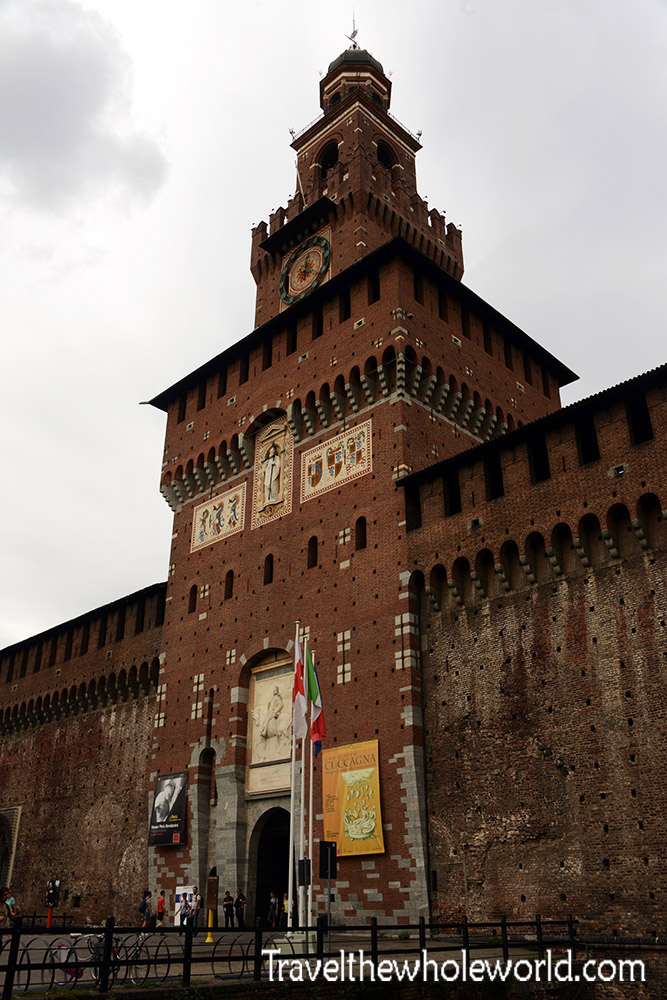 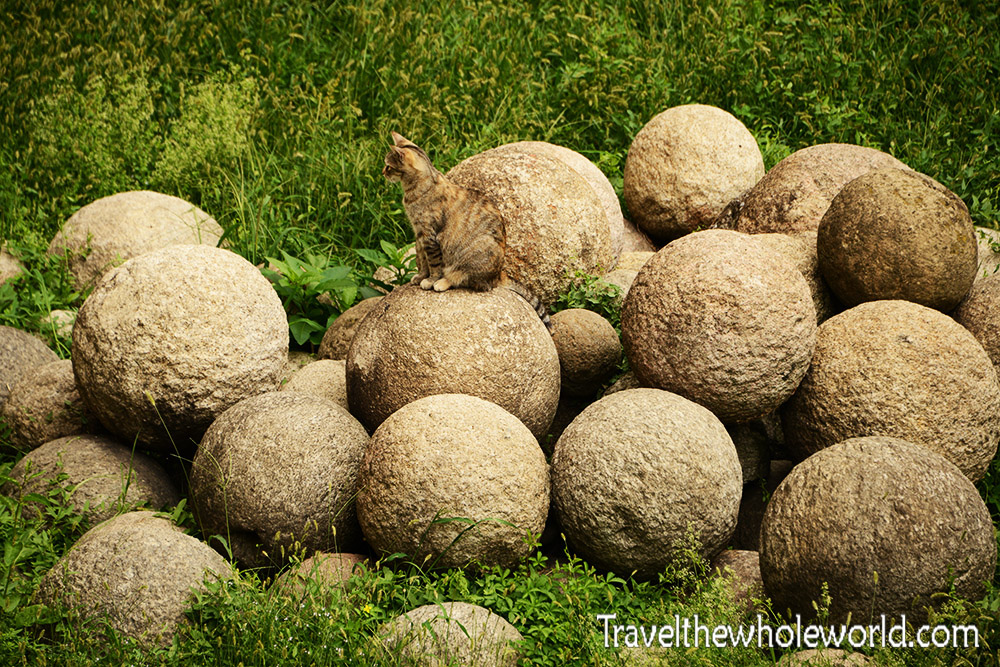 I’m not sure what these polished stones were, but there was a large pile of them on the outside of the castle. If you look you can see there is a cat that’s nearly matches the color of the stones. I took this photo with my zoom in full, and didn’t notice the cat until I had gotten home! 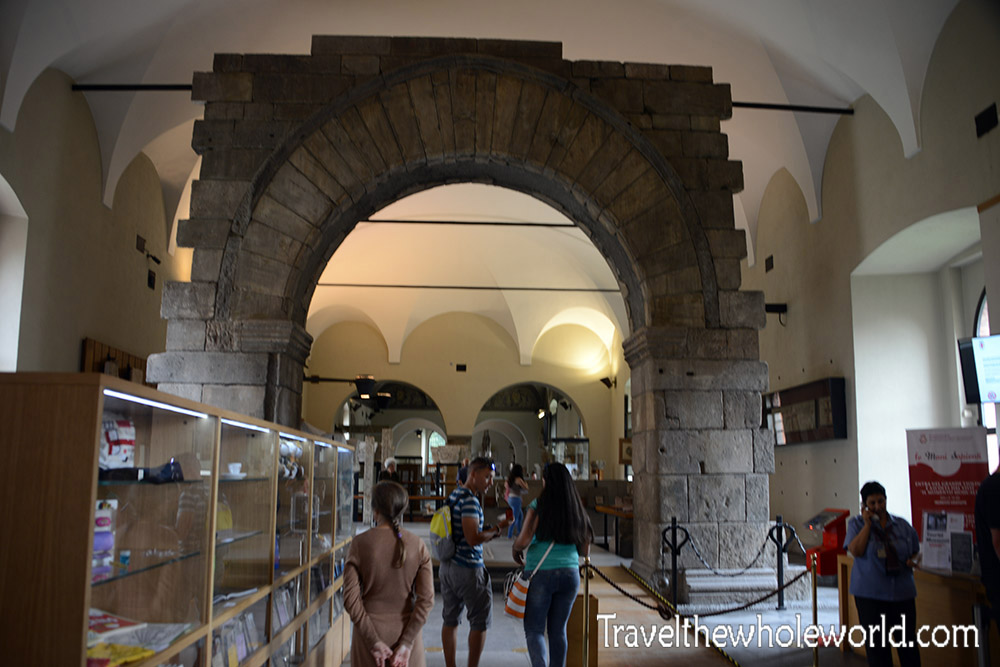 I should have taken more pictures to show the massive castle and all the things it contains. To put things in perspective, there are nine museums on the castle grounds! Some of them are international ones such as the Egyptian museum, while of course others are dedicated to the castle and other local history. Despite all the information here, I’ve not yet found out who this bust is below. It was one of the first things I found while entering the castle. 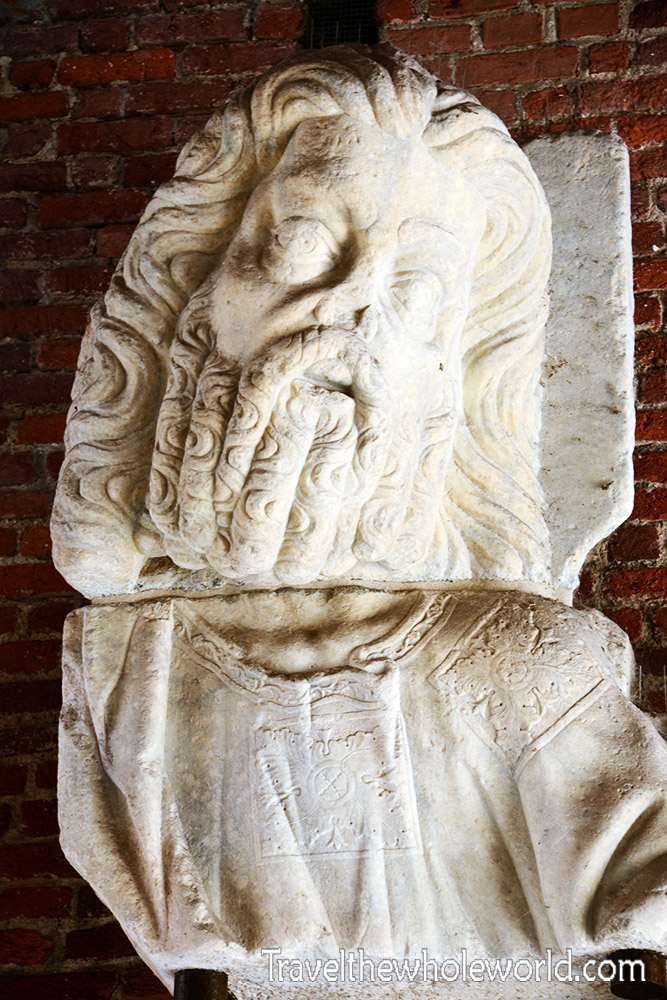 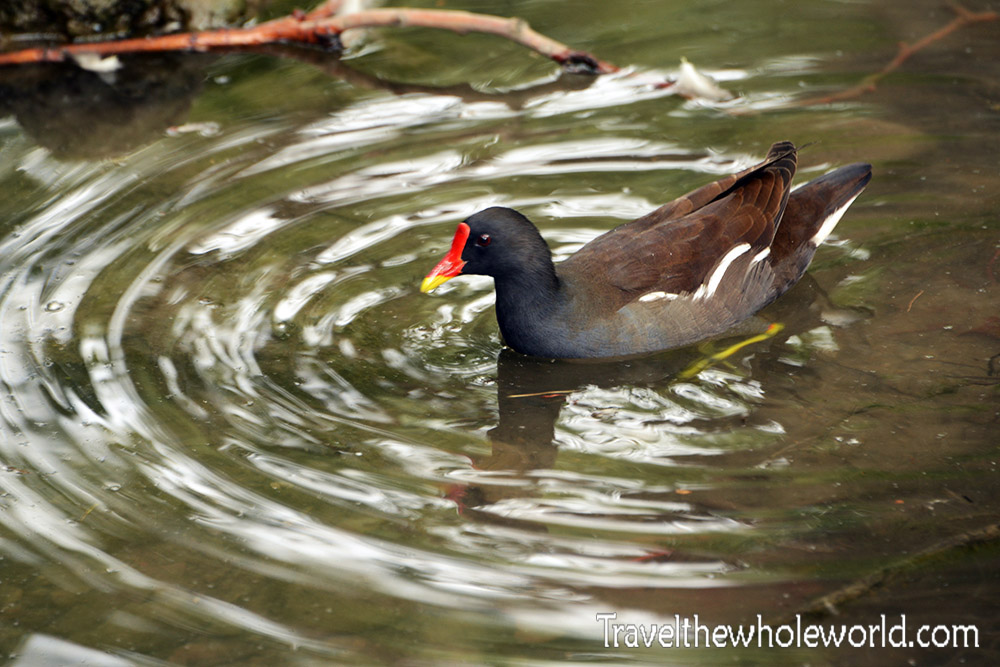 While this place is essentially a giant castle full of museums, there are also plenty of city parks within the fortress making it a nice place to relax or go for a while. I had spent so much time walking through the city that I enjoyed hanging out by this pond to relax a bit. Here I got my only two wildlife shots so far from Italy, this duck above and turtle below. 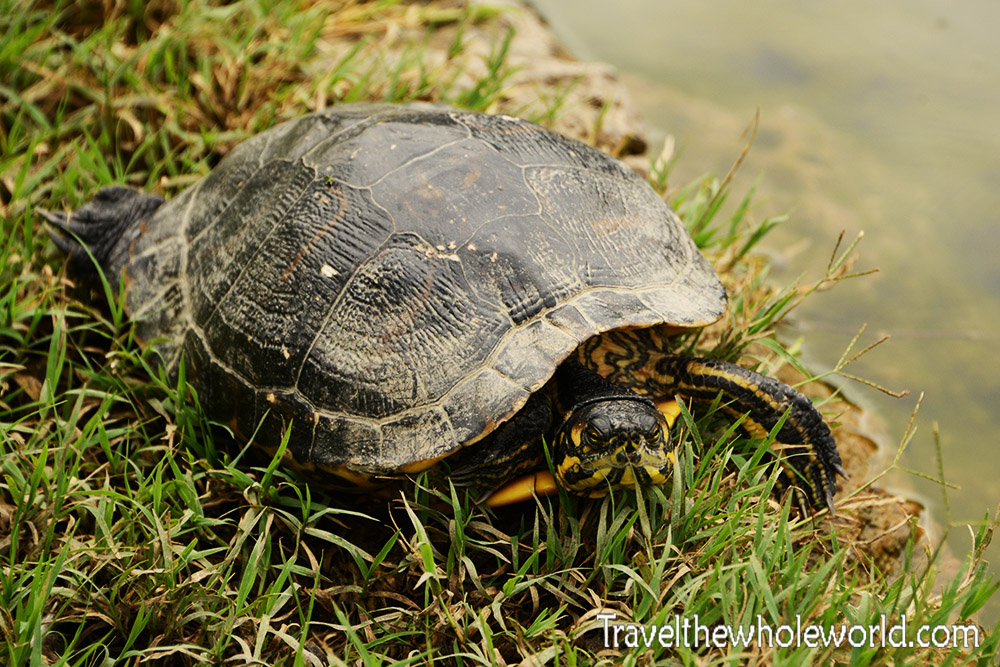