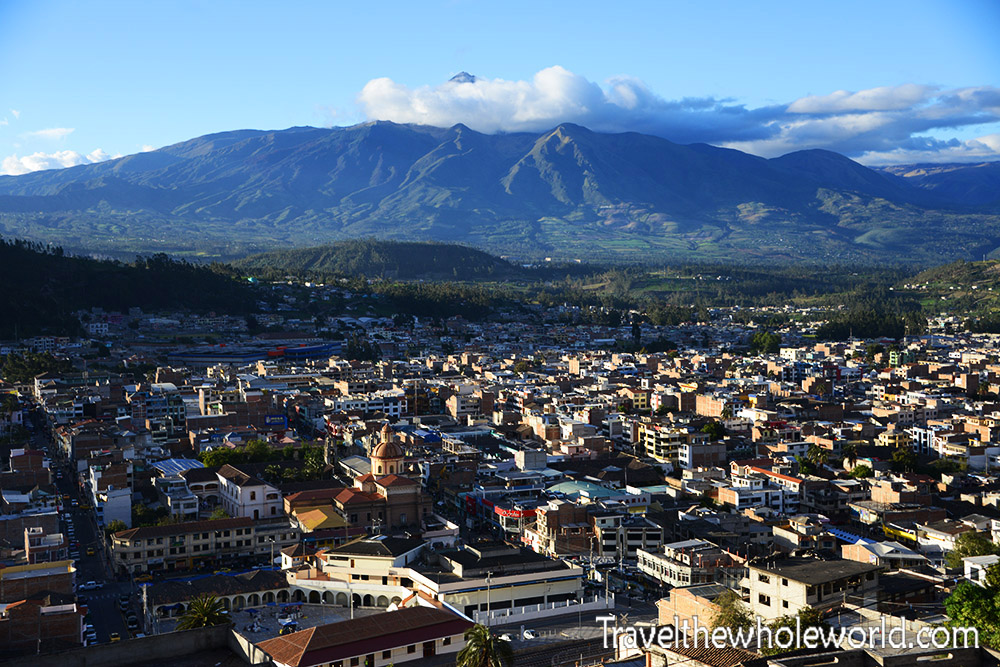 The small Andes town of Otavalo is perhaps the most picturesque town in Ecuador. Located at an altitude of over 8,000 feet (2,500 meters), the town is surrounded by beautiful mountains and lakes, and is known for its native American culture and markets. This would probably be where I’d choose to live if I had to stay in Ecuador; its easy access to so many outdoor options, great weather, and simple lifestyle are appealing. 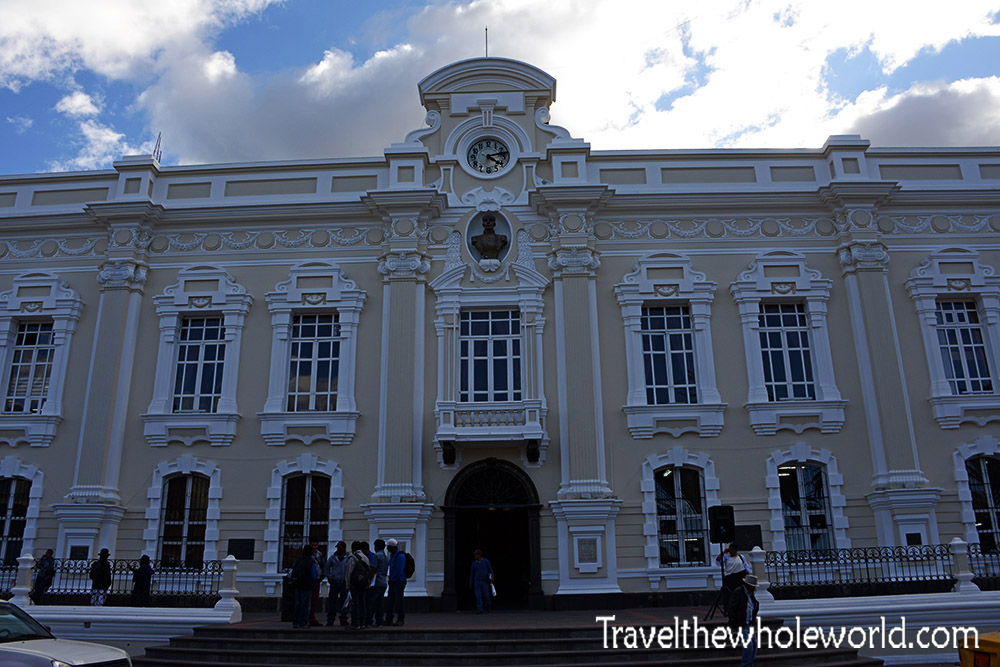 Otavlo’s city center has a small plaza that seemed to have a lot going on for a place of less than 40,000 people. The photo above shows Otavalo’s city hall, a large and elegant building for this small Andes town! Around the plaza were many shops, restaurants, and even live music one day I visited. It’s one of those places where it seems to be really lively, and then you step into a side street and suddenly you’re almost all alone. 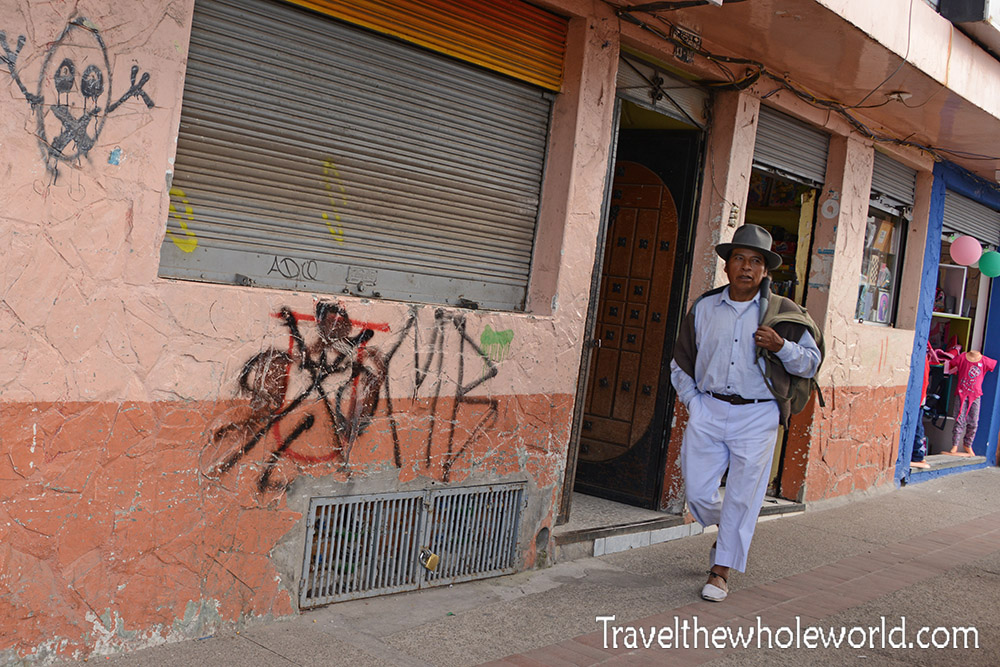 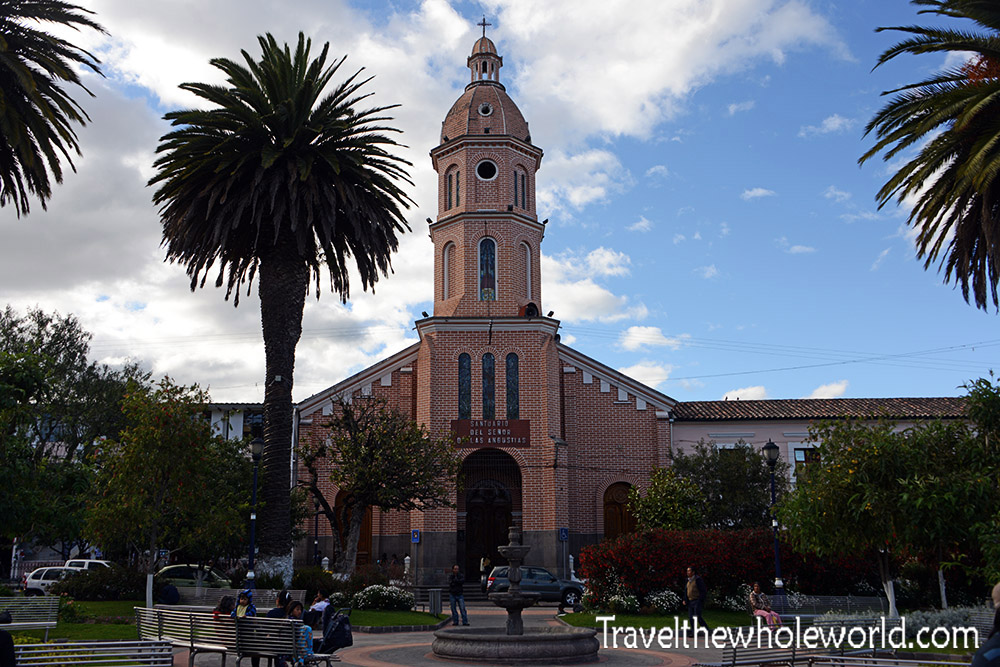 The majority of residents in Otavalo are native Americans, but of course they have largely adapted western cultures and religion. Photographed above is the church of San Luis. I visited Otavalo in December when there were a few Christmas decorations in the city, the largest being this nativity. 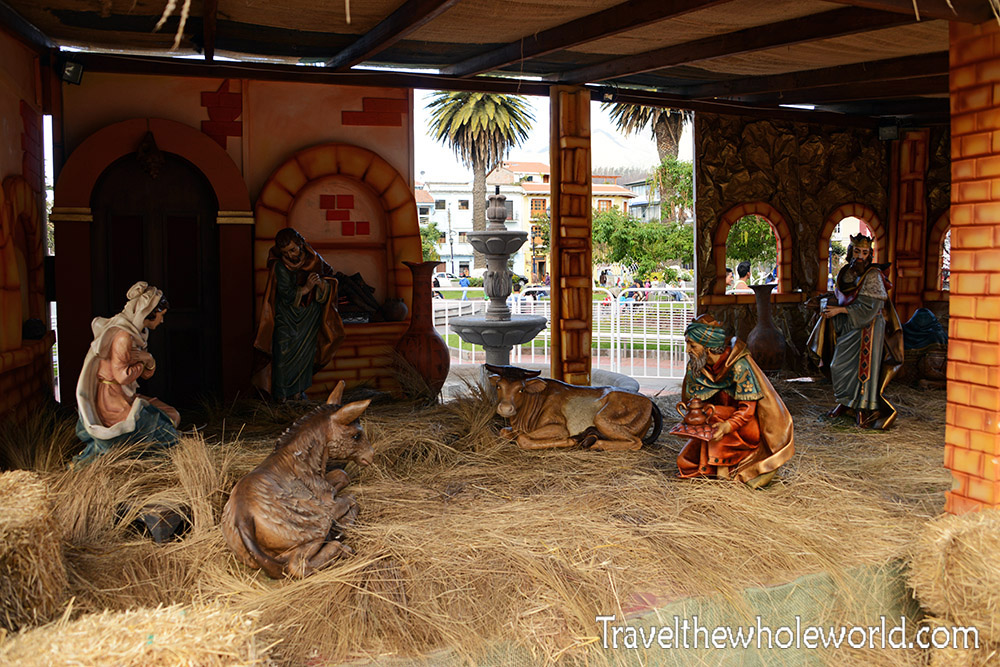 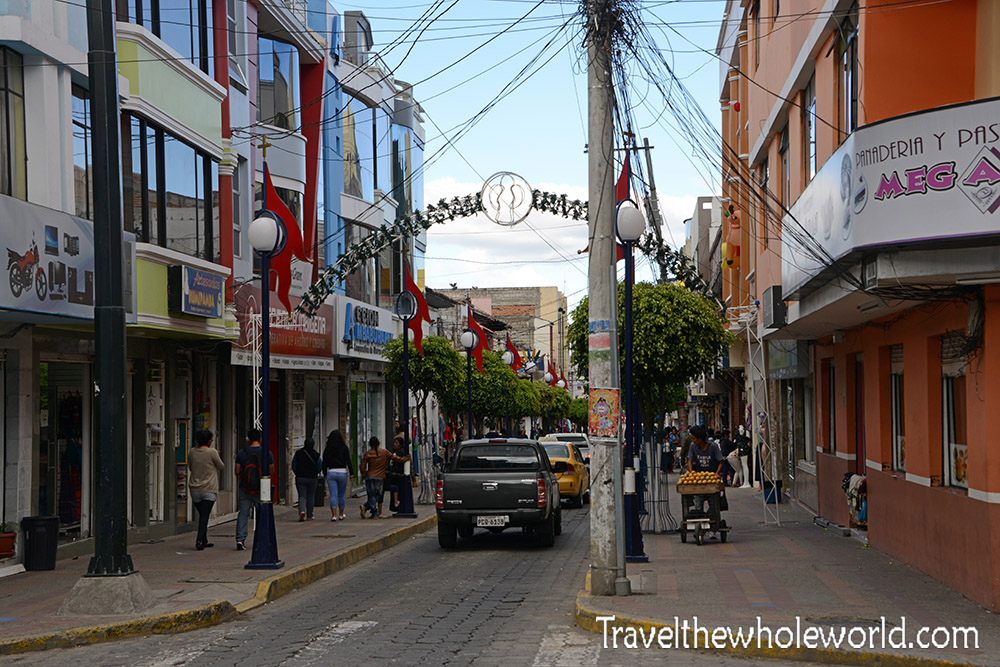 Although Otavalo is definitely a small town, it’s not so little that there isn’t much to do. There were plenty of small restaurants, cafes, and even coffee shops to choose from. The native markets are what really make the town interesting, but I’ll get to that later! The photo above is from center of Otavlo; below shows a lightly Christmas decorated fireplace in a cafe I visited. 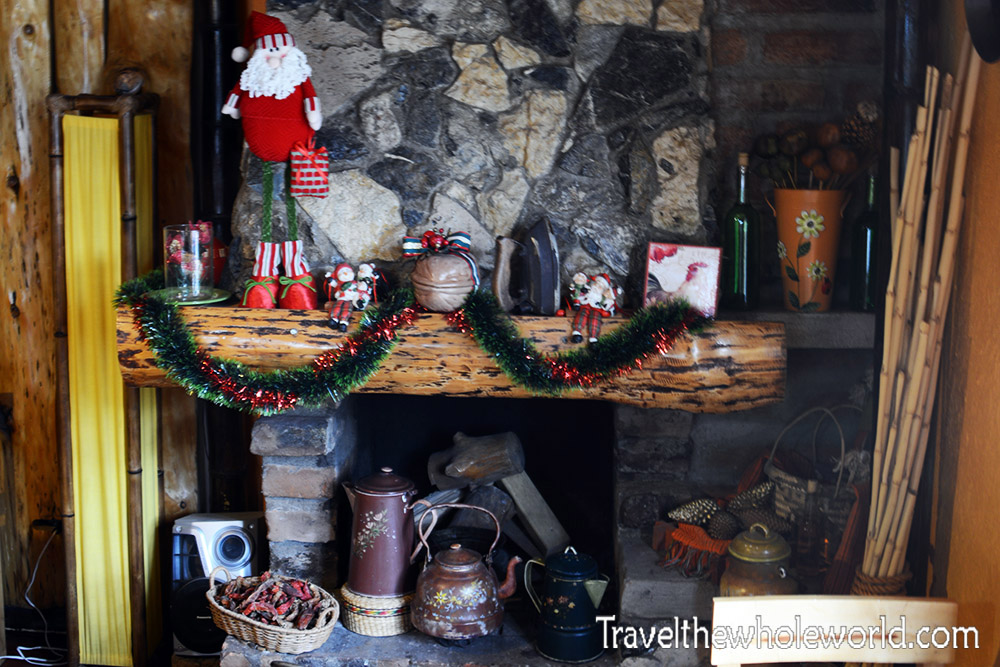 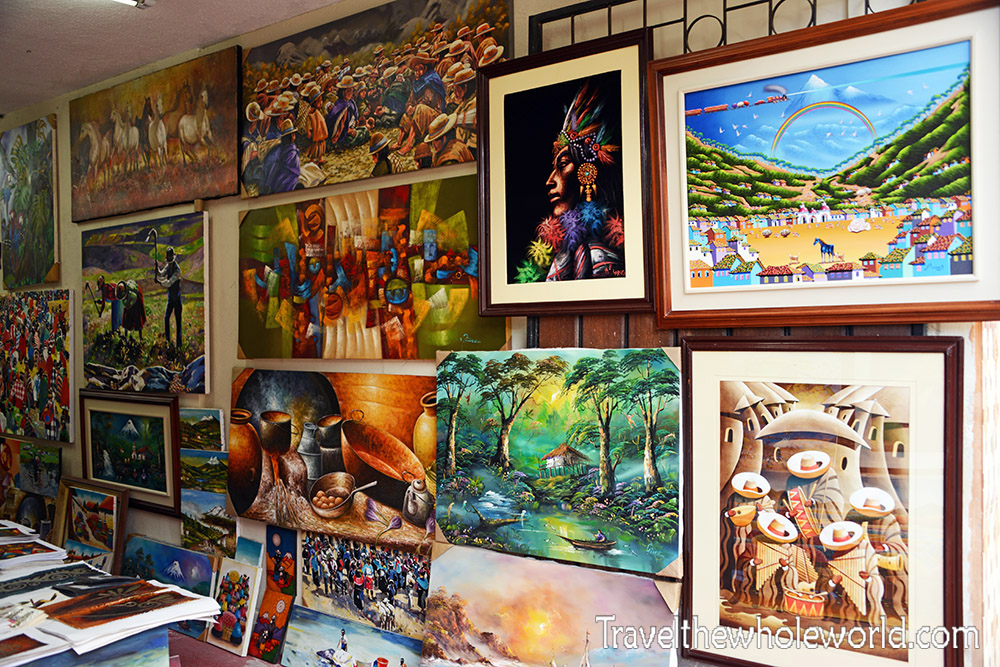 What makes Otavalo stand out is its surprisingly large art scene. There seem to be more art shops and markets here than you could ever visit. Mixed in with the cafes and restaurants were several art stores that sold paintings. In one of the outdoor markets I took this photo below of all their heavily used tools. The vast majority of things created here are all hand made. 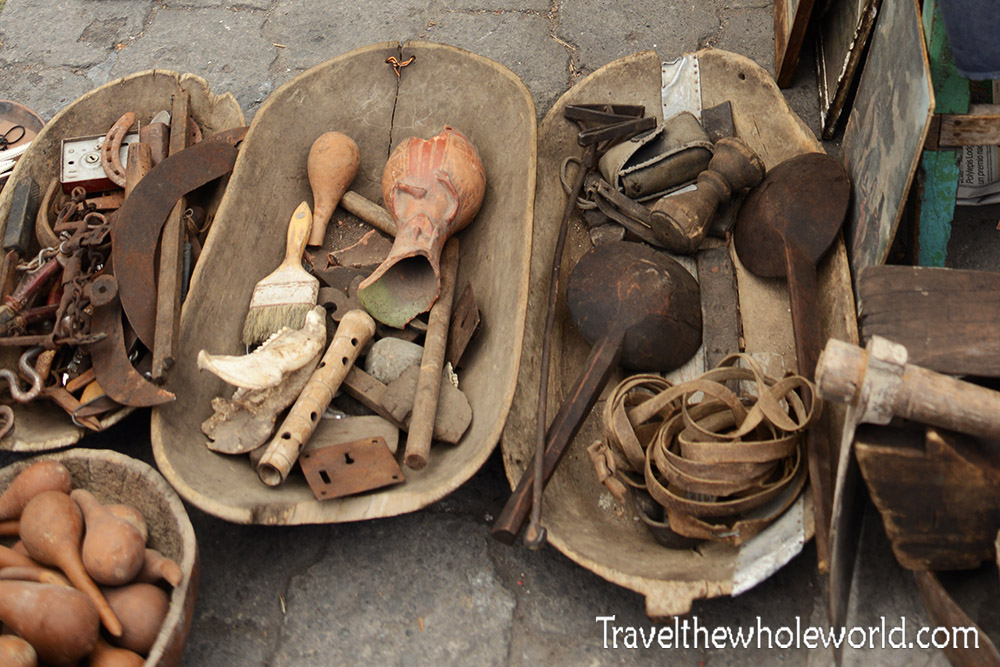 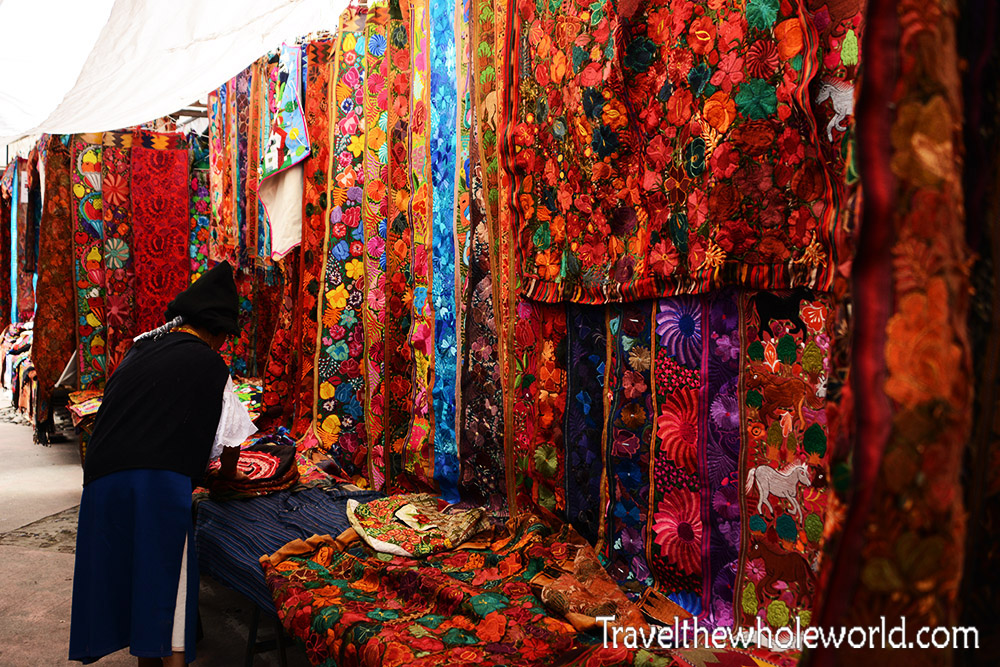 If you like souvenirs, then Otavalo is probably the best place to visit in the entire country. The town wasn’t touristy at all, so you’re getting more authentic items versus something that was likely to be mass produced in places like the capital. There’s quite a range of things to get here, from the paintings I showed earlier, to these textiles and beads. 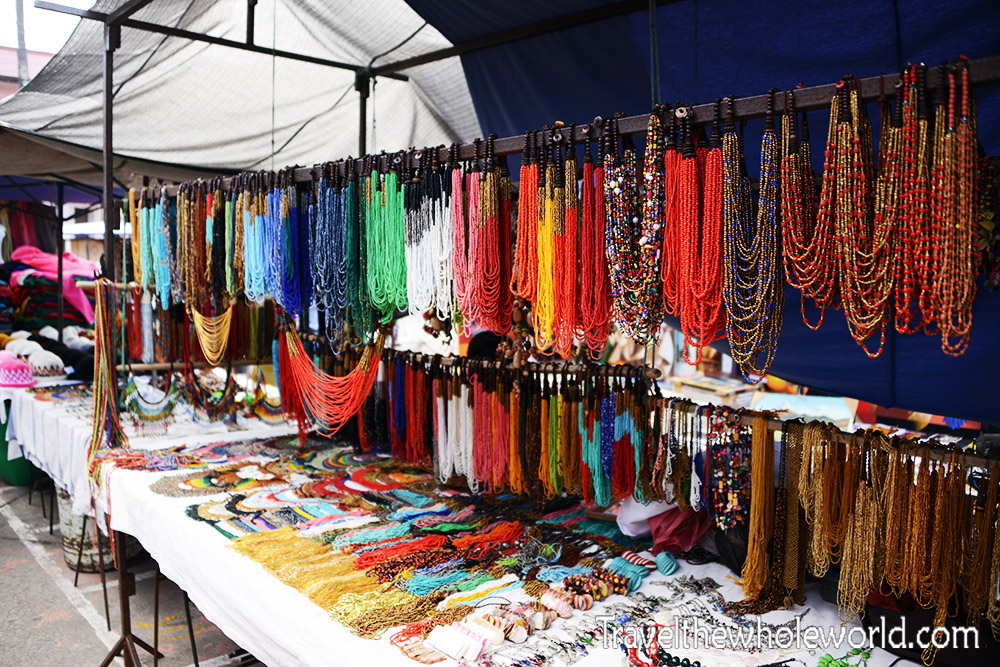 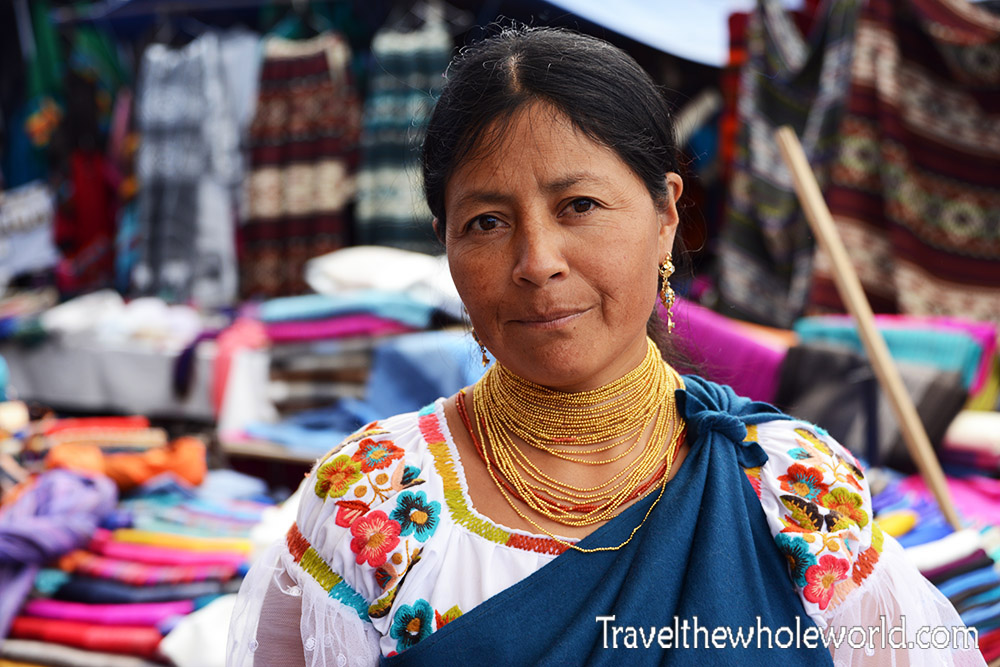 I rarely purchase souvenirs, but there were so many things in the market that I found something that appealed to me. I ended up getting a few things from this lady, who was also nice enough to let me take her photo. Most of the items here were garments and artwork, but a few touristy things are also available like these llama dolls below. 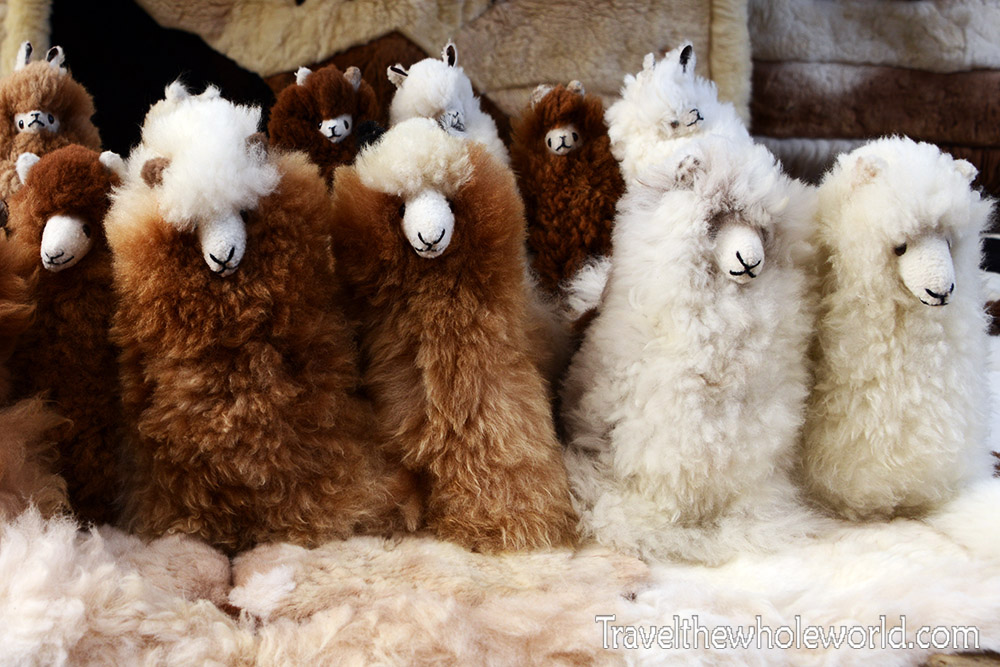 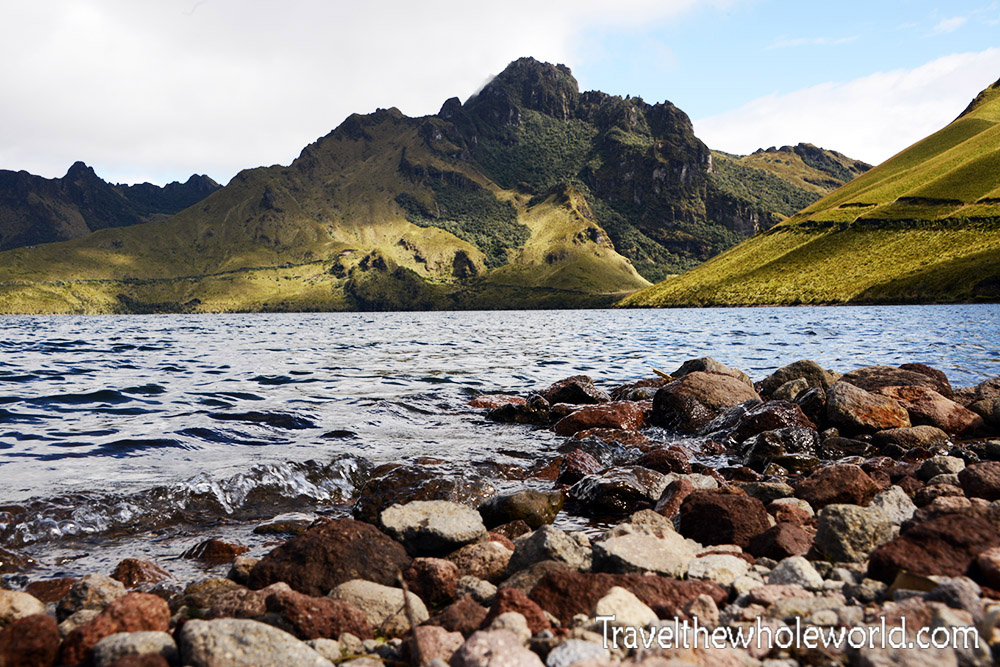 And finally what I really came to Otavalo for! I wanted a nice place to hang out, while also having good opportunities for some high altitude hikes. Otavalo is surrounded by several mountains over 4,000 meters, just a taxi ride away. This mountain is called Cerro Negro, with its beautiful lake Mojanda in the first photo. The photo below shows Cerro Negro as I climbed higher on an adjacent peak and got a more dramatic view of the 13,976 foot(4,260 meter) mountain. 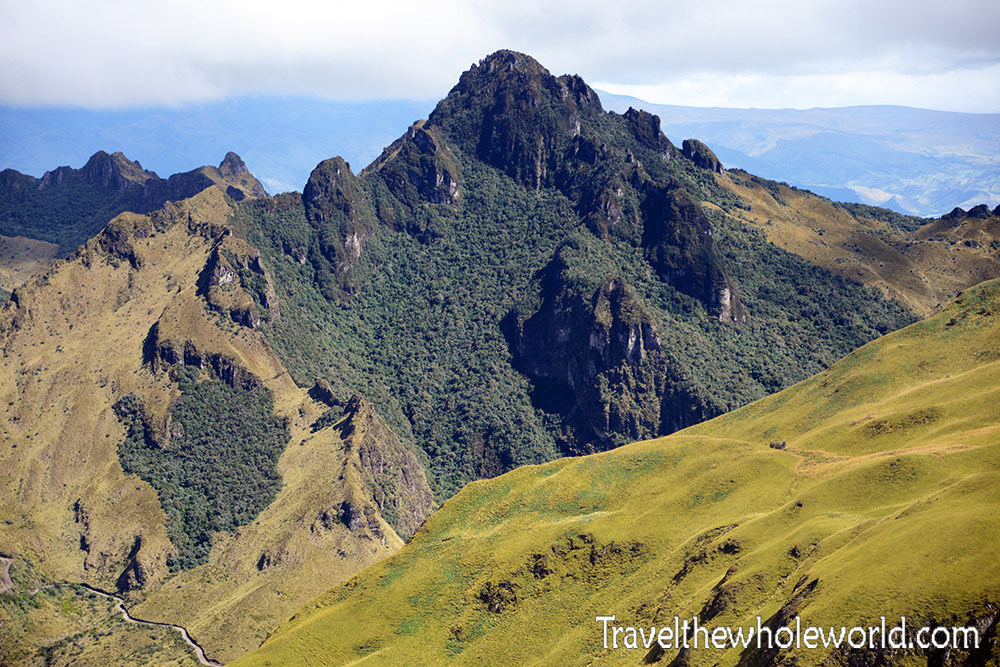 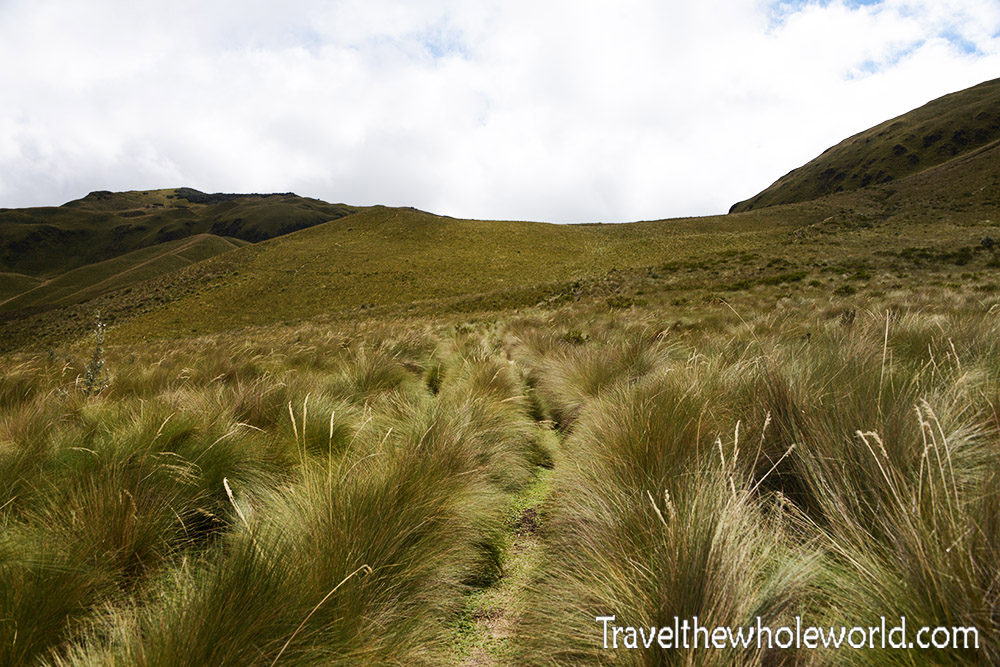 I had come to Otavalo to get some high altitude in order to help acclimatize for Illiniza Sur, a technical 17,000 foot (5,000 meter) peak in the Ecuadorian Andes. The purpose of Illiniza Sur was to help train for Mt. Everest, so Fuya Fuya was the first significant mountain I hiked as I got close to my expedition in the Himalayas. This is a perfect hike for everyone, and for the most part you’re hiking along grassy hills. In the photo above you can see there isn’t much of a trail when you first start off, just head towards the mountain! Below is a picture I took as I approached Fuya Fuya, and you can see the trail going between then two peaks. 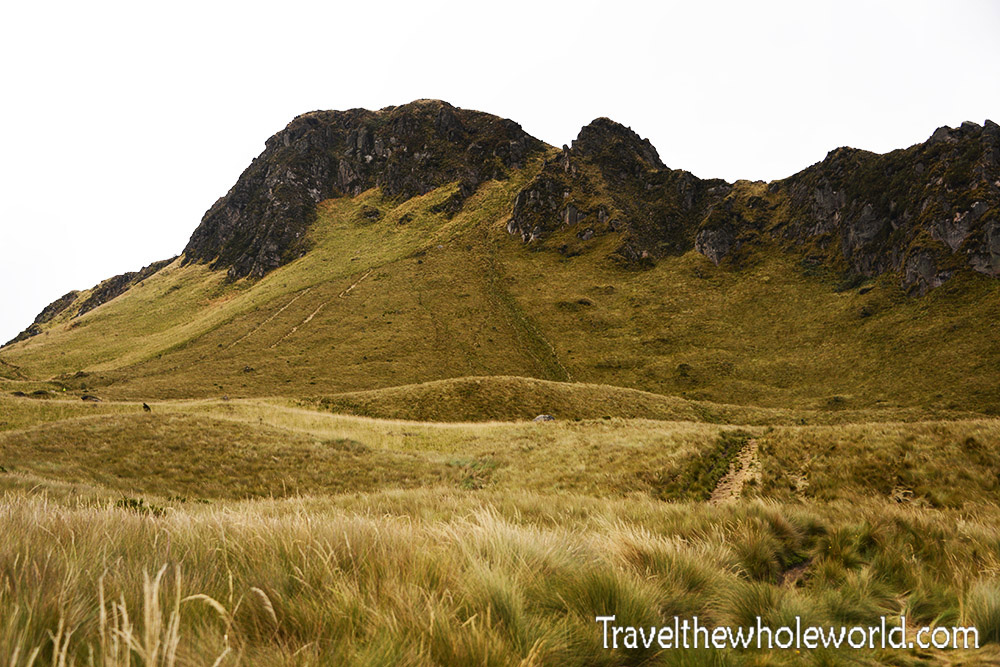 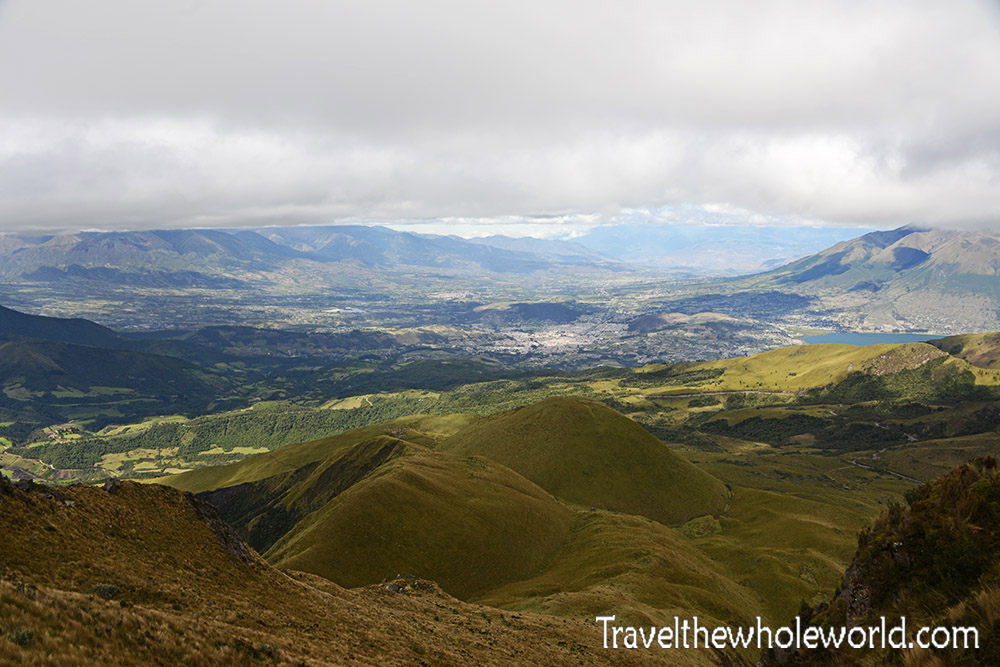 And like most climbs, the rewarding part is the spectacular views! Otavalo in the photograph above wasn’t too impressive because it was so far in the distance, but lake Mojanda was front and center, just under a low ceiling of clouds. If/when I return to Otavalo, Cerro Negro will be my next hike for sure. 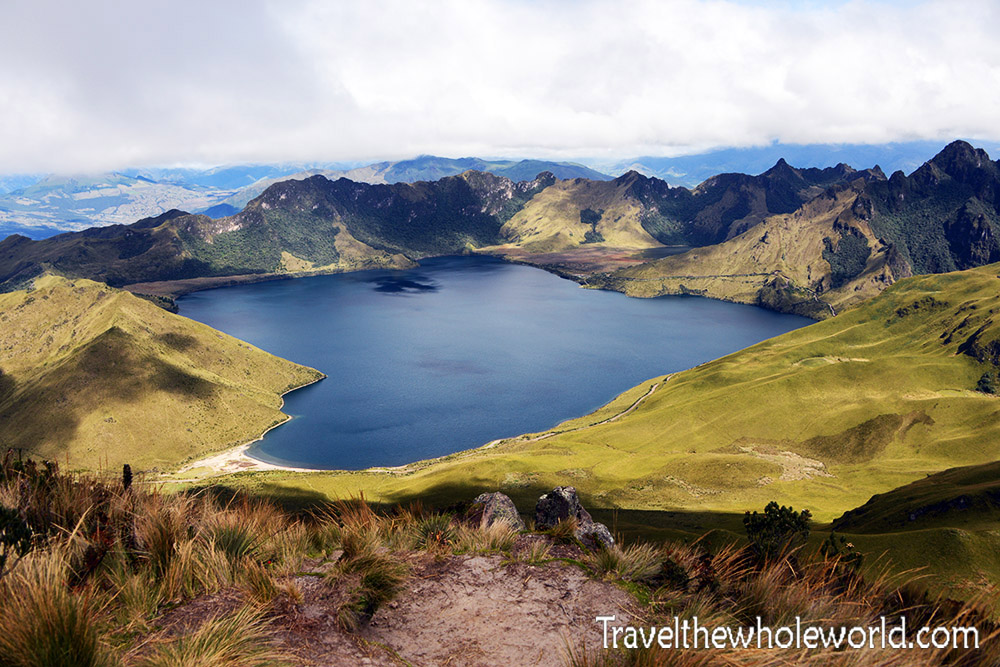