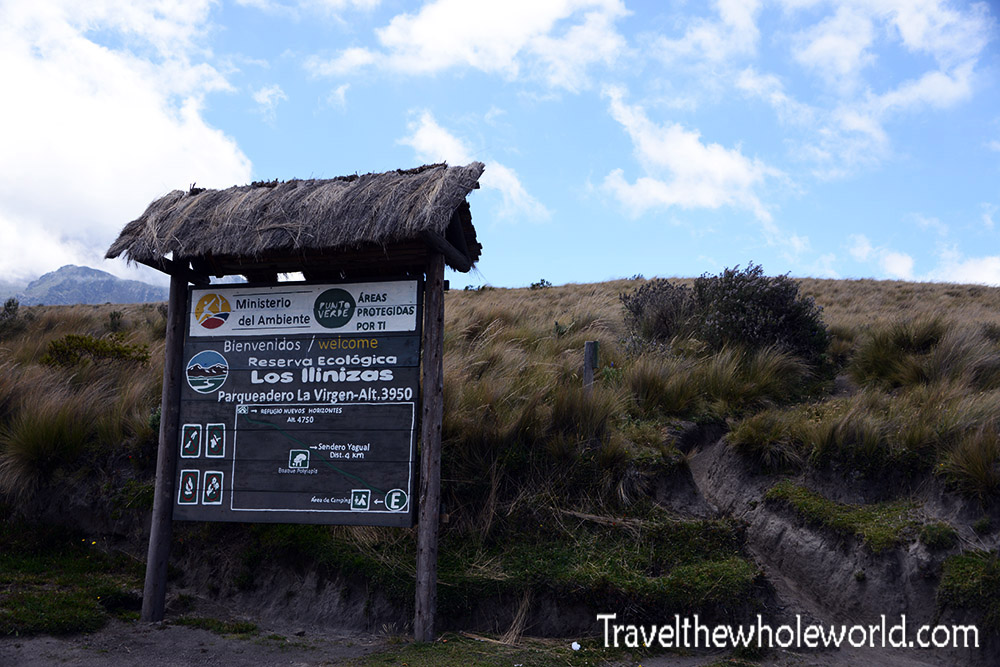 Illiniza refuge is a beautiful mountainous area of Ecuador that often seems over looked. You can do all types of activities here from simple hiking and camping to serious mountaineering. The reserve is located high up in the mountains, with the entrance at 13,000 feet (3,950 meters). 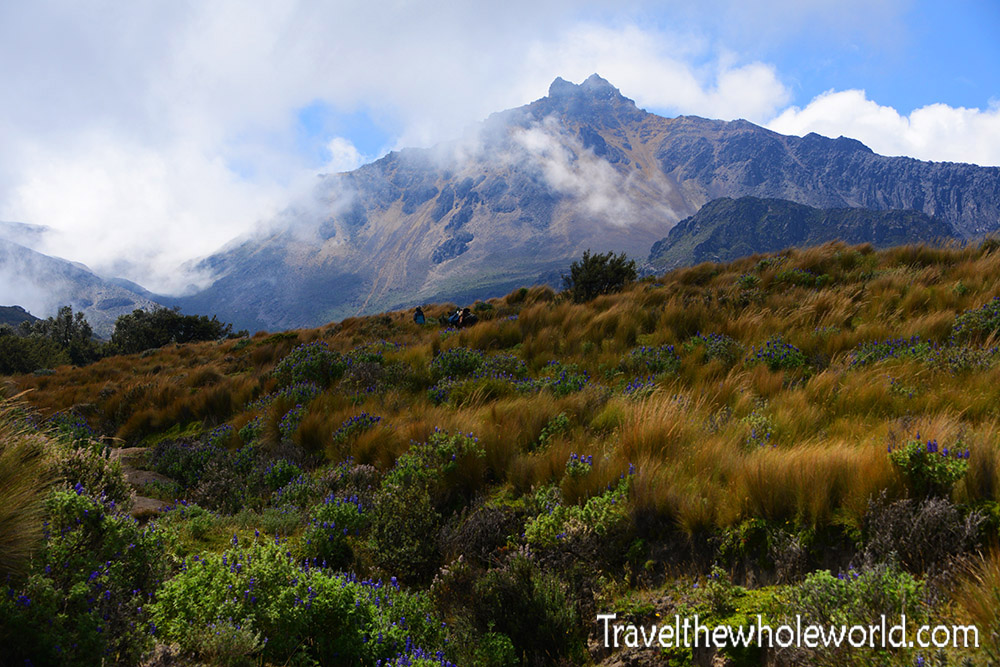 The refuge is named after the twin mountains Illiniza Sur and Illiniza Norte. As soon as you begin hiking, you’ll be rewarded with some amazing views of Illiniza Norte. Illiniza Norte is by far the most summited peak of the two. Reaching the top generally requires a two hour hike from a mountain hut to the summit, with some possible light scrambling. When I visited I had typical weather of the Illinizas. Illiniza Norte was visible while Illiniza Sur was hidden behind clouds. This is generally the case, and as a result Illiniza Sur receives a lot more precipitation. The snow and ice along with some exposure requires an ice ax, rope and other mountaineering gear. Illiniza Sur is actually considered one of Ecuador’s most technical mountains. 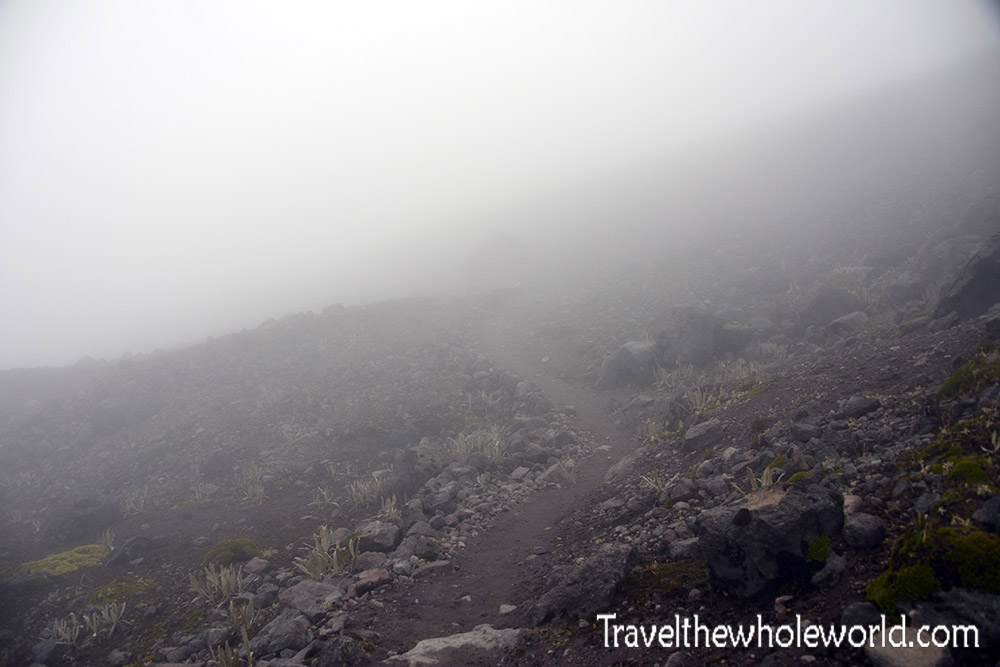 I started the morning off with some sunshine, but the two hour hike to the refuge quickly changed to fog and wind. The hike itself was pretty easy, and soon after we started I was able to see the saddle, photographed below. The saddle is in between the two mountains and is the location of the refuge where I was going to spend the night. You won’t be able to see the refuge until you’re minutes away from it, but it’s still nice to have an idea of your entire route. The final part of the hike went up some annoyingly steep terrain all the way to 15,500 feet (4700 meters). 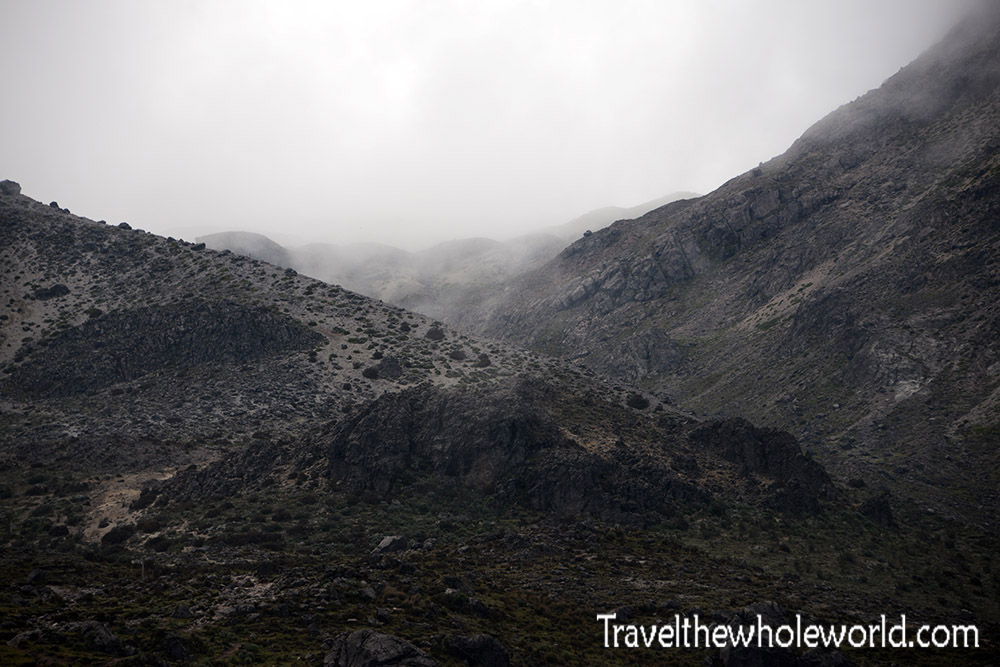 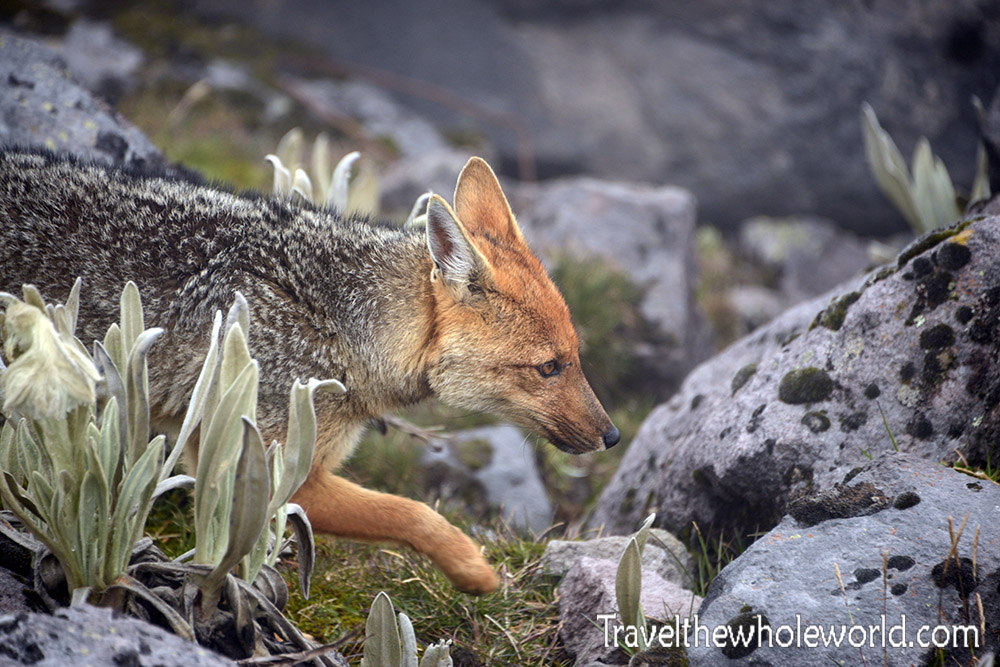 Right before I got to the refuge, I came across this Andean fox, otherwise known locally as a Culpeo. This guy was not shy at all, and I really think if I had some food he would have taken it from me directly from my hand! 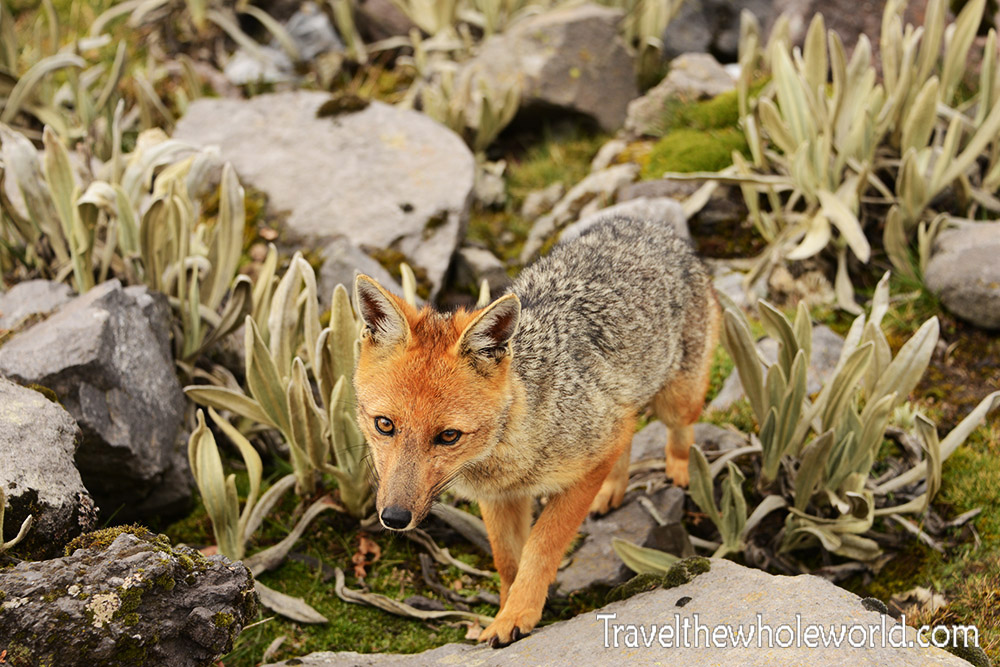 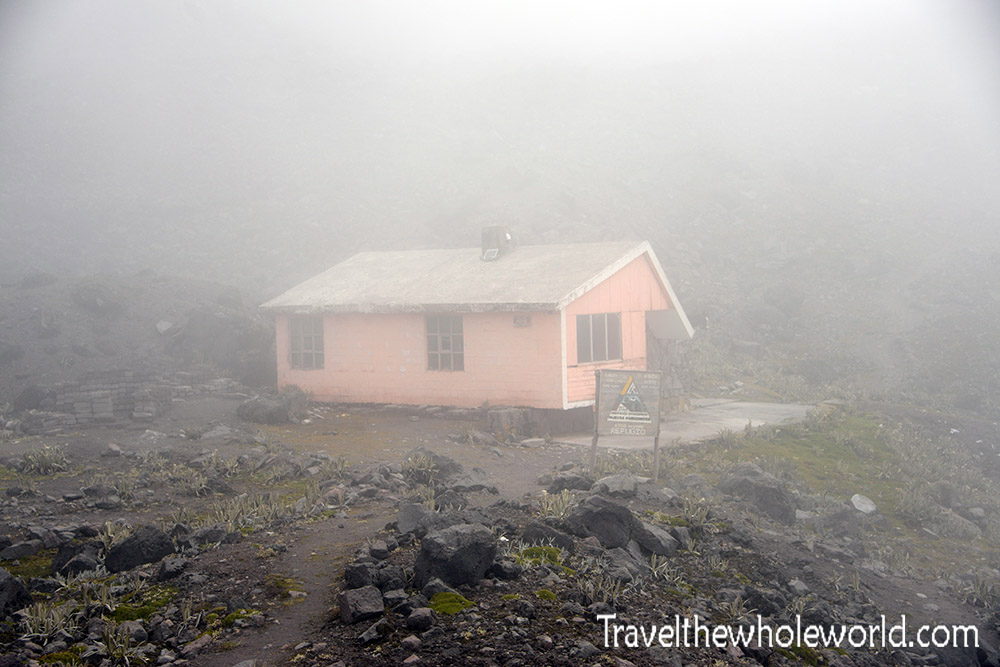 The Illiniza Refuge looked more like a random hermit’s hideout than a place for climbers and hikers. I wish I took some photos of the inside, but it’s got a bit more than it looks to have on the inside. There are several large bunk beds, a small kitchen, and a long table for meals. I was the only one attempting to climb Illiniza Sur when I stayed, but met several others who were going to try the north mountain. We had some great conversations and lots of laughter before we called it a night! 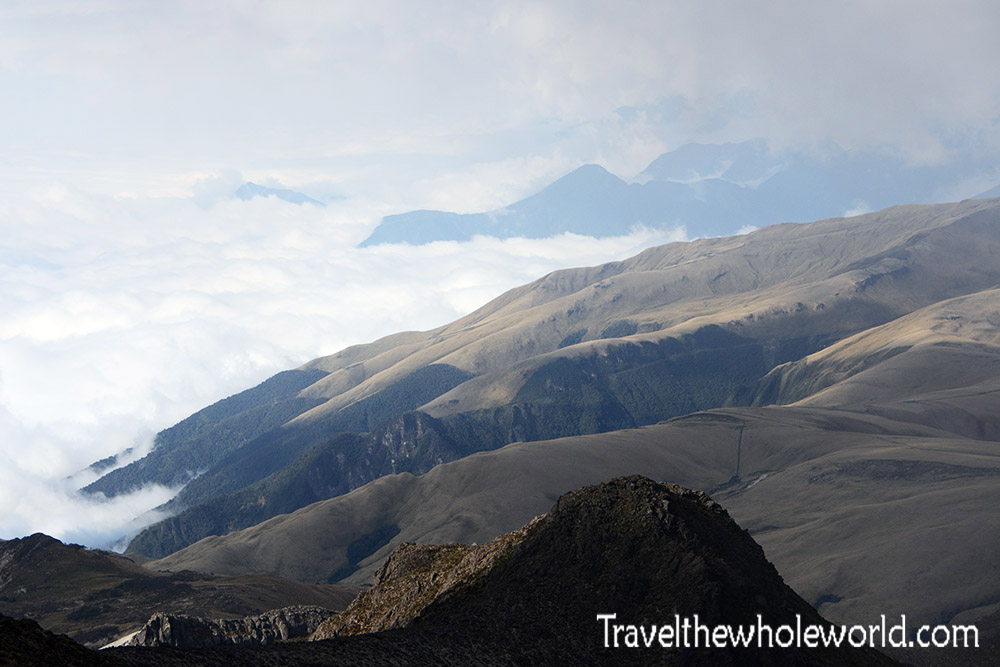 Even if you only do the two hour hike to the refuge you’ll get some great views. This is only of course if the weather clears up. Luckily for me, I could see the clouds slowly eroding away down the valleys exposing some of the most spectacular mountain scenery I’ve ever seen in South America. 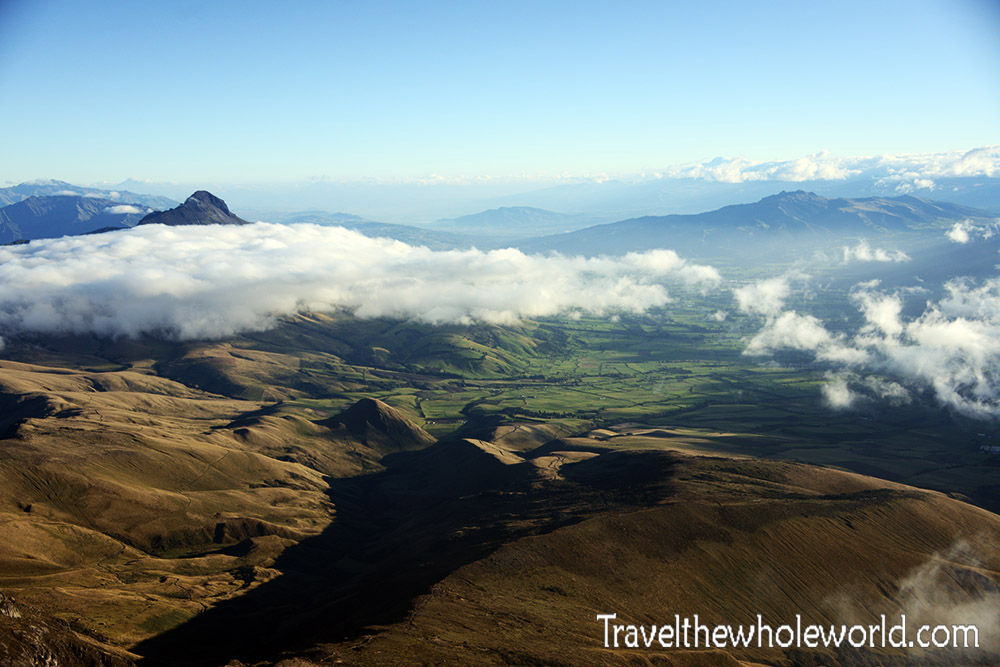 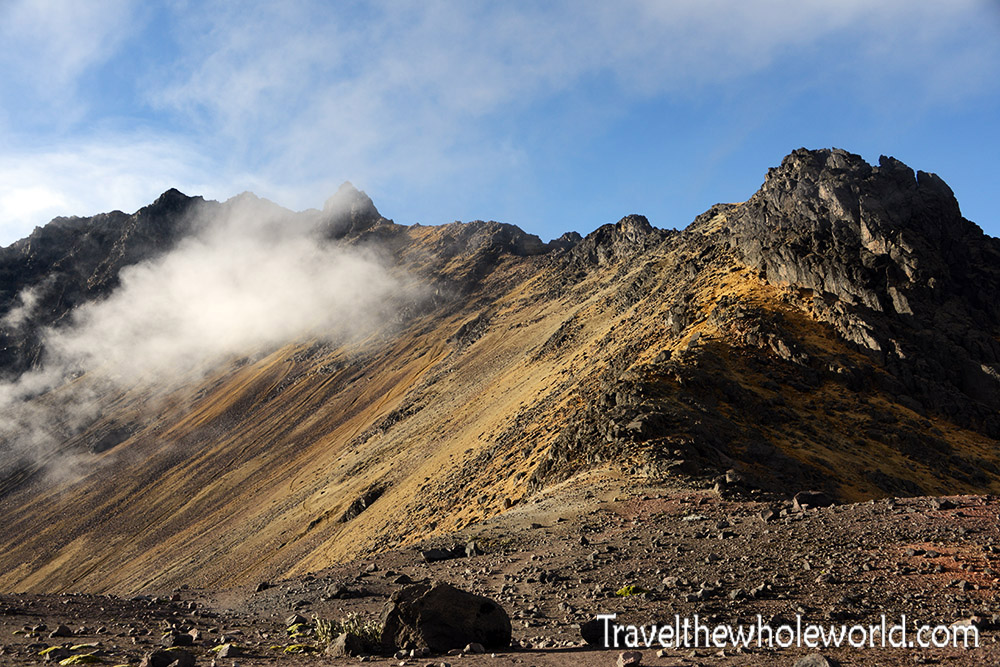 From here, you can also clearly see the route to the top of Illiniza Nortre, photographed above. Not so impressive is the view of Illiniza Sur. The refuge is right at the mountain’s base, so you’re looking up at Illiniza Sur from an awkward angle. I never saw this mountain come out from the clouds while at a distance, but photos I have seen previously showed it to be equally as beautiful as its northern counterpart, if not more so. That night in the refuge, my guide called me outside to let me know that the mountain hadn’t been climbed in weeks because of dangerous conditions. Apparently a lack of snow on the mountain made large rocks and boulders exposed and increased the risk of them falling on us. The steep snow ramps we were supposed to climb had also melted only to later freeze again as black ice. He suggested we take an alternate route which would take us to the east summit, and from there decide what to do next. 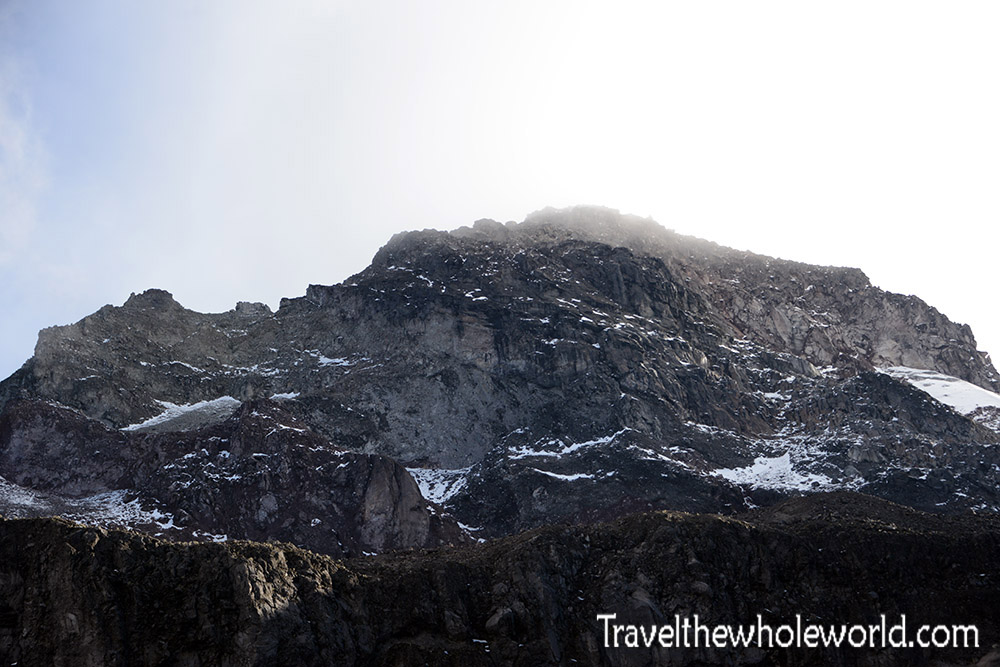 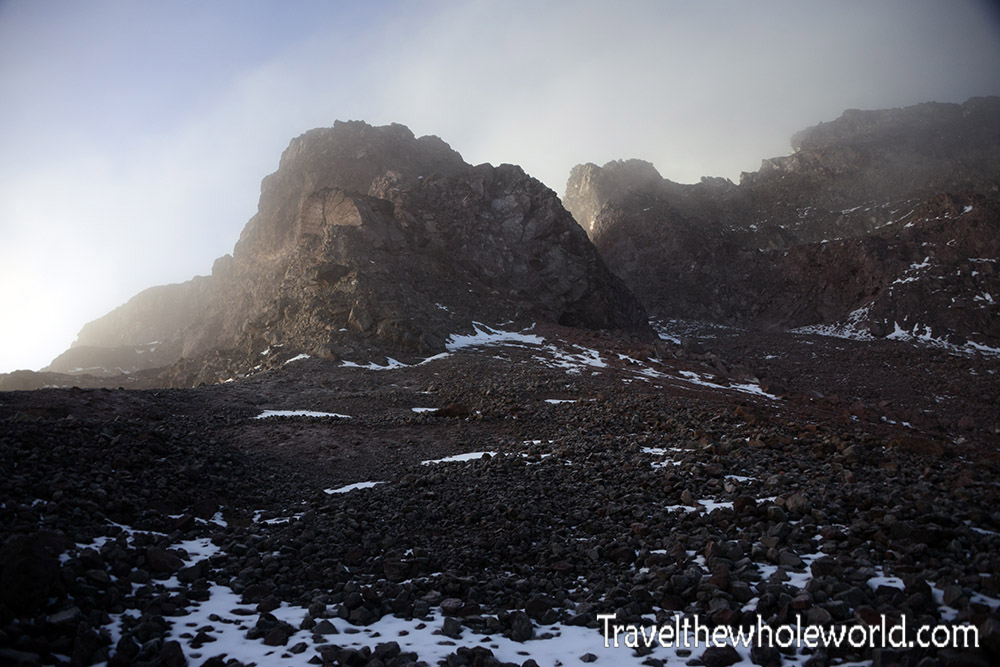 The next day we woke up at 4 am and were climbing by 5. It didn’t take long for some sun to light the way and I took my first photo of the day above. The mountain still didn’t appear very technical at this point. It seemed like a big block that we had to circle around and then hike across the top. 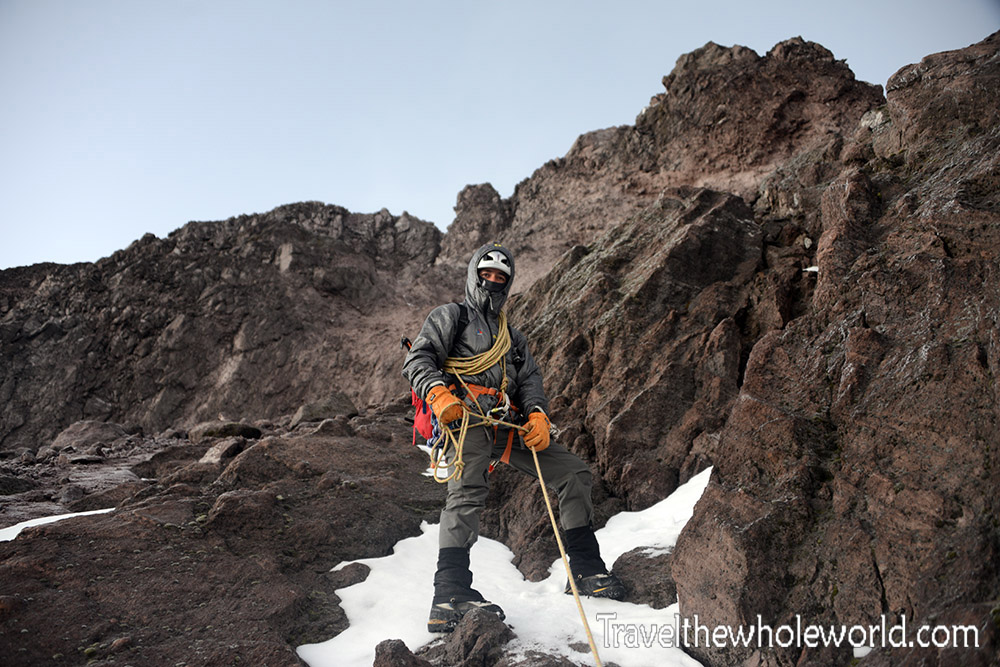 Once we circled the base, we did some light scrambling up to the top of the ridge. At this point we roped up and continued on. We were over 16,000 feet by now (nearly 5,000 meters), and despite me coming from sea level only a few days prior I was feeling relatively great! 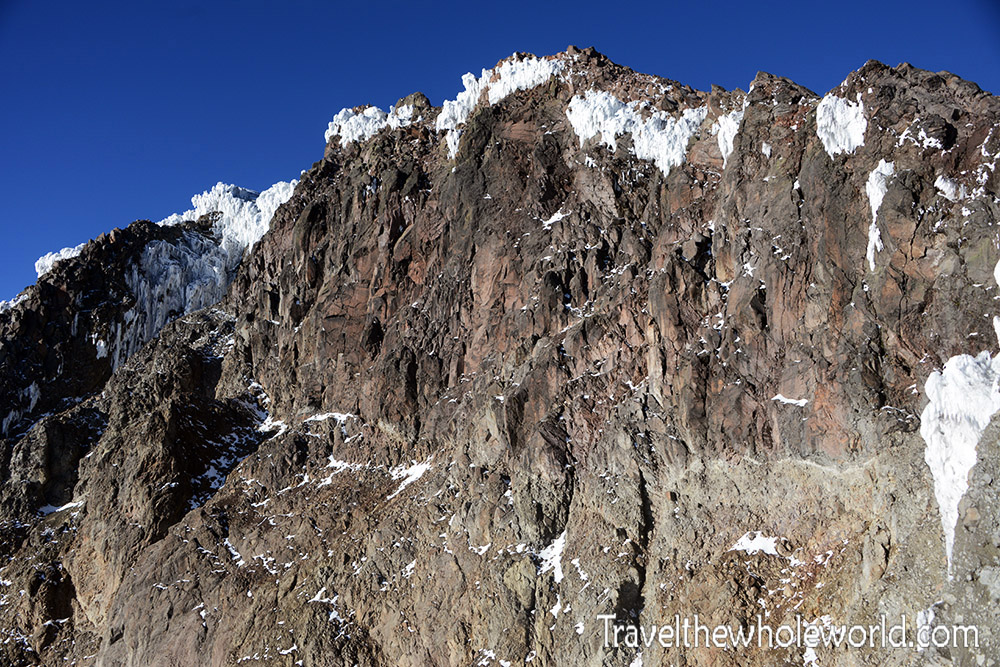 Once on top of the ridge, we could see the remaining part of the route to the east summit. Normally this mountain is completely covered in snow, but as you can see here, it was mostly exposed rock with some interesting ice formations like in the photo below. 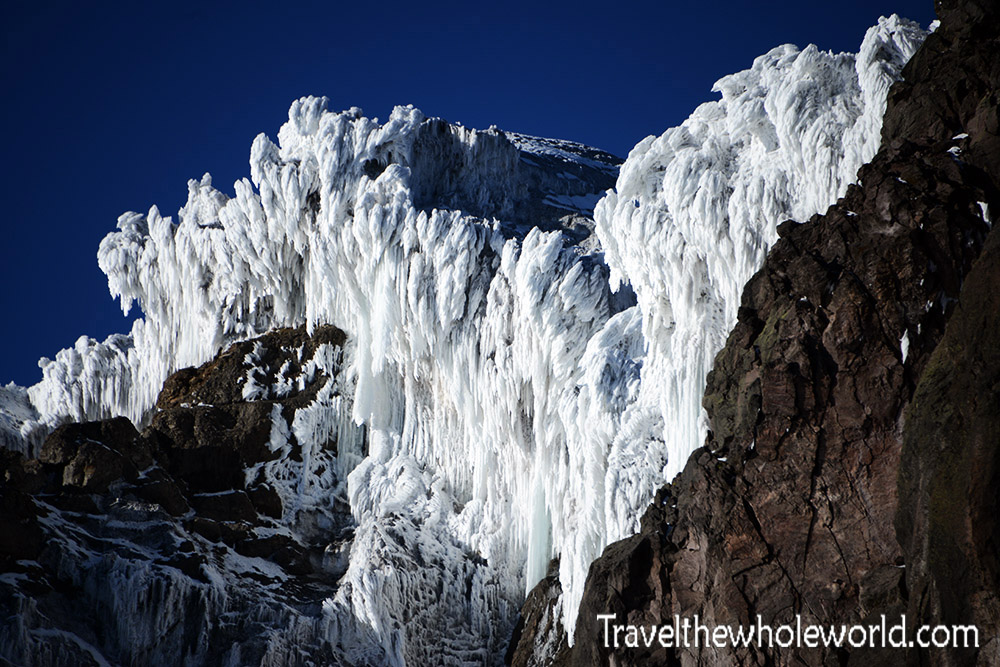 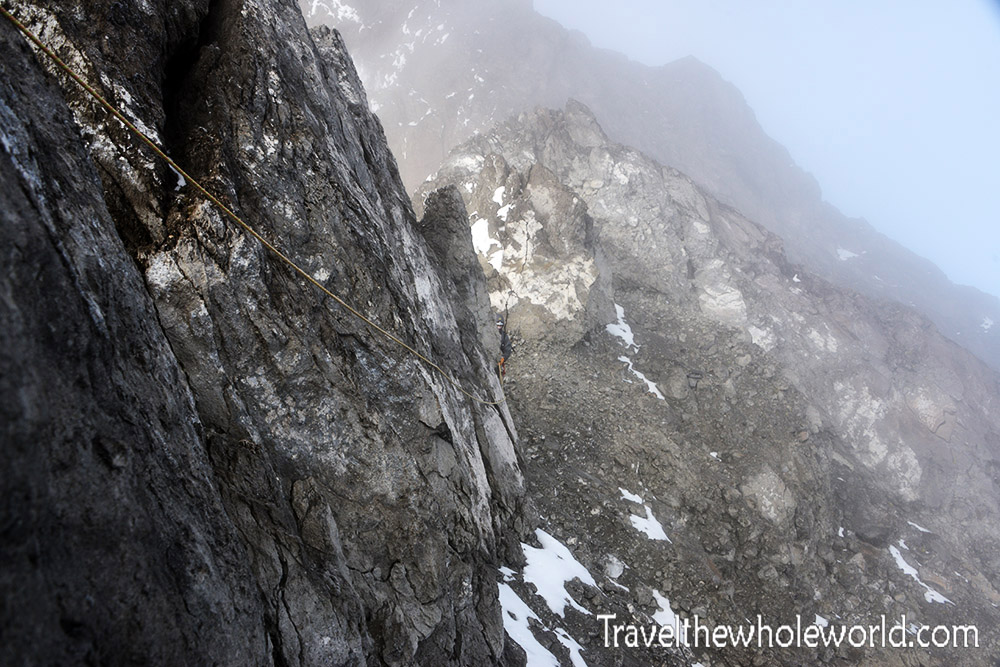 It was after we got up on the ridge that we began to get to the technical part of the climb. Our first obstacle was easy. We had to pass this ridge that had an exposed drop. The problem with this route in Illiniza Sur was all the loose rock. It might not look like it in the photo above, but many parts of the wall that I grabbed onto came off in my hands. Below is a photo I took while looking back on another ridge we had crossed. 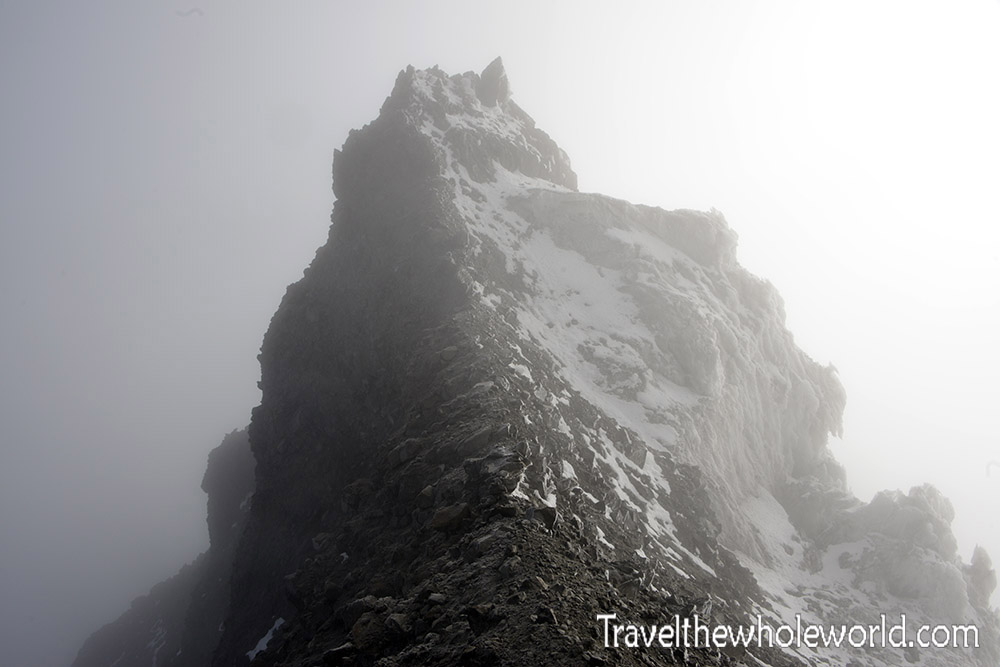 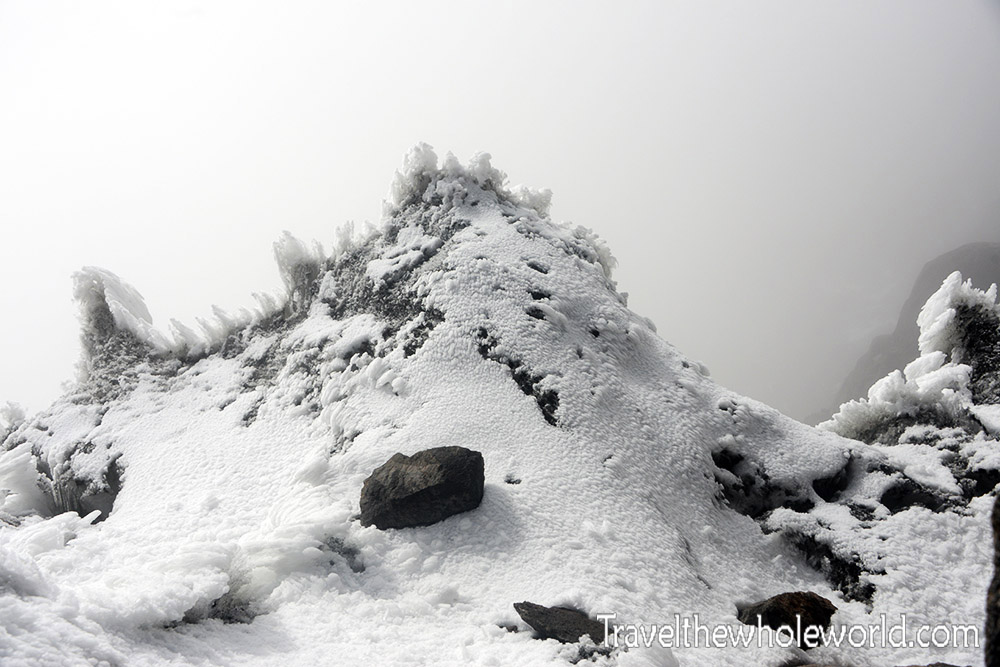 From this point we started to encounter some real snow and technical parts. None of the moves were really demanding, but some were definitely a bit exposed. When doing technical climbing it’s always difficult to take photos, but luckily I have some Go-Pro video posted further below! 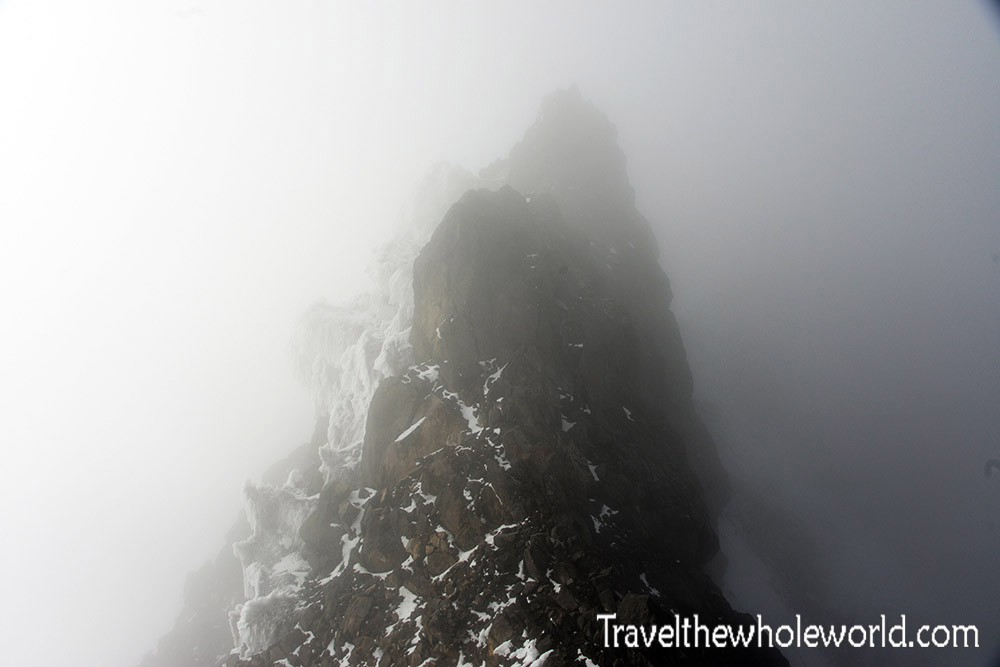 We finally reached the east summit at 8am, exactly as planned. The west and true summit of Illiniza Sur is photographed above. Under ideal conditions, this would only be a mere ten more minutes away. It didn’t look so impossible from here, but my guide suggested we not attempt it. Apparently there was lots of black ice that we’d have to climb vertically. This would require some serious ice climbing and would be impossible without anchors, ice screws and other gear that isn’t normally isn’t required here. Another alternative that he was against was descending down the normal route, but this would still expose us to some serious rock fall. Being that the two summits are nearly identical in height, I was very satisfied with the climb and saw no reason to take unnecessary risks. If I ever return to Ecuador, next on my list would be Altar, the most remote and difficult mountain in the country. 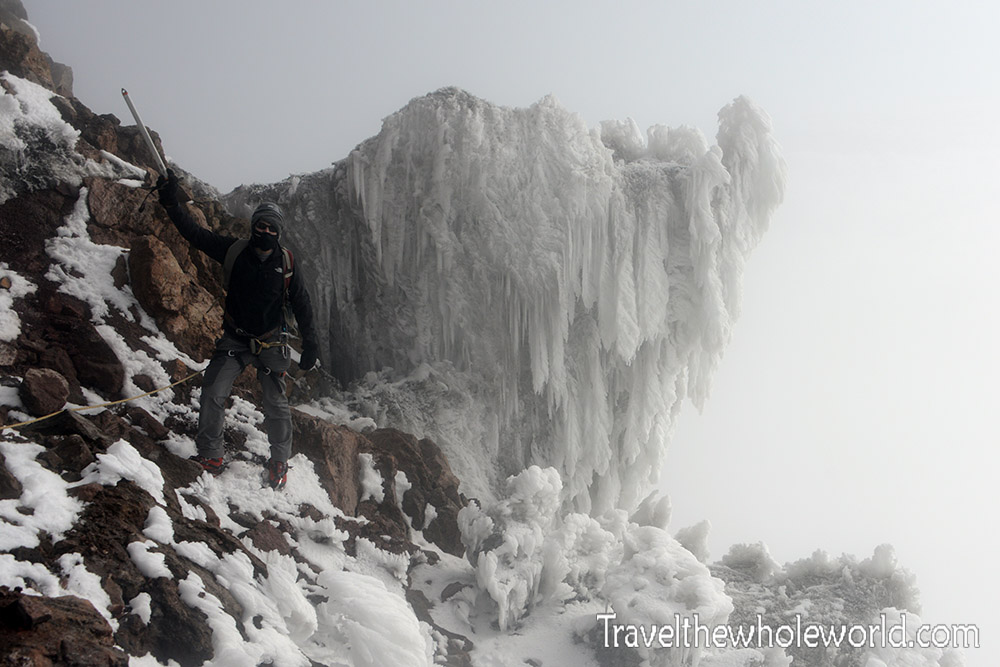