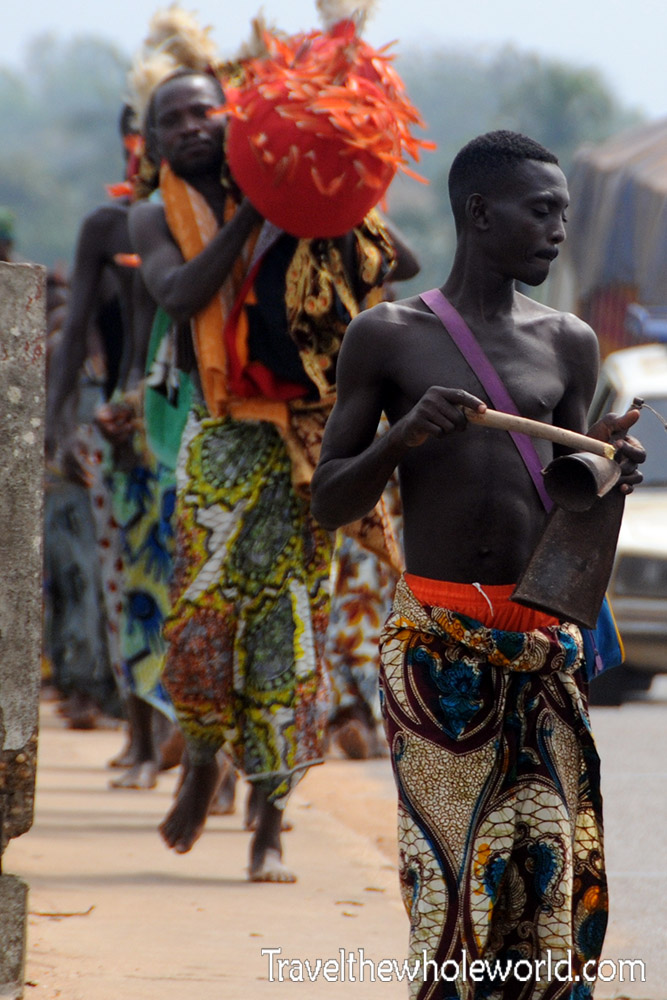 After Cotonou my next stop in Benin was to Ouidah, the birthplace of voodoo! Even driving through Ouidah I saw a large group of people doing a spiritual voodoo march down the main street. All of them wore traditional clothing and were chanting while their leader used some type of bell. 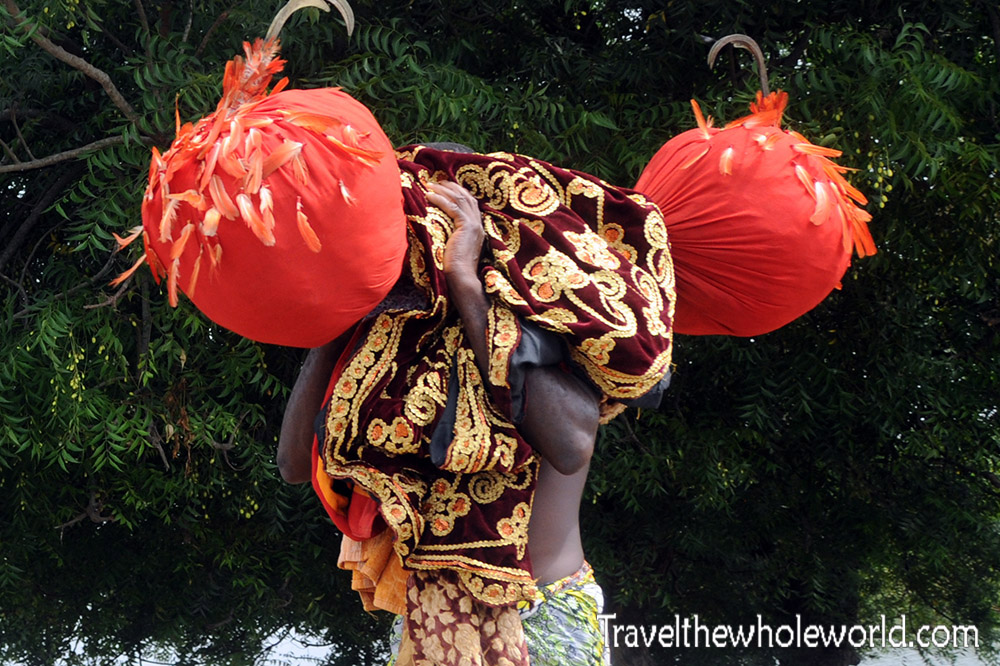 From an other experience I know that most people practicing voodoo are extremely camera shy. I had been walking through a different village when some people were doing a different type of ceremony and got up and literally ran away when they spotted me. These photos were kind of snuck in so I had to avoid the face shots, although the woman in the center was able to sense my presence anyway. 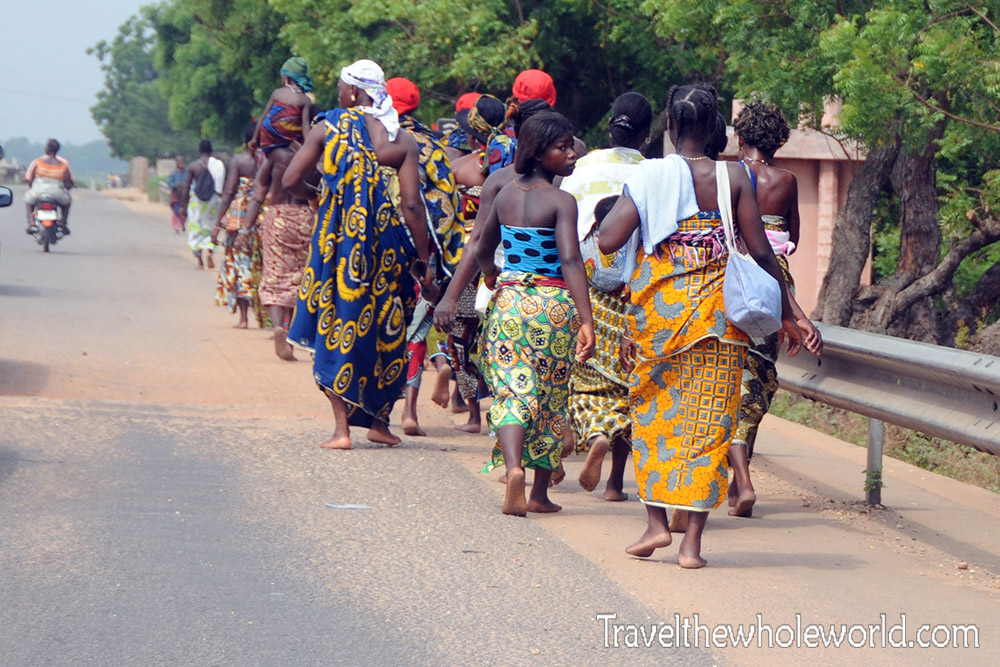 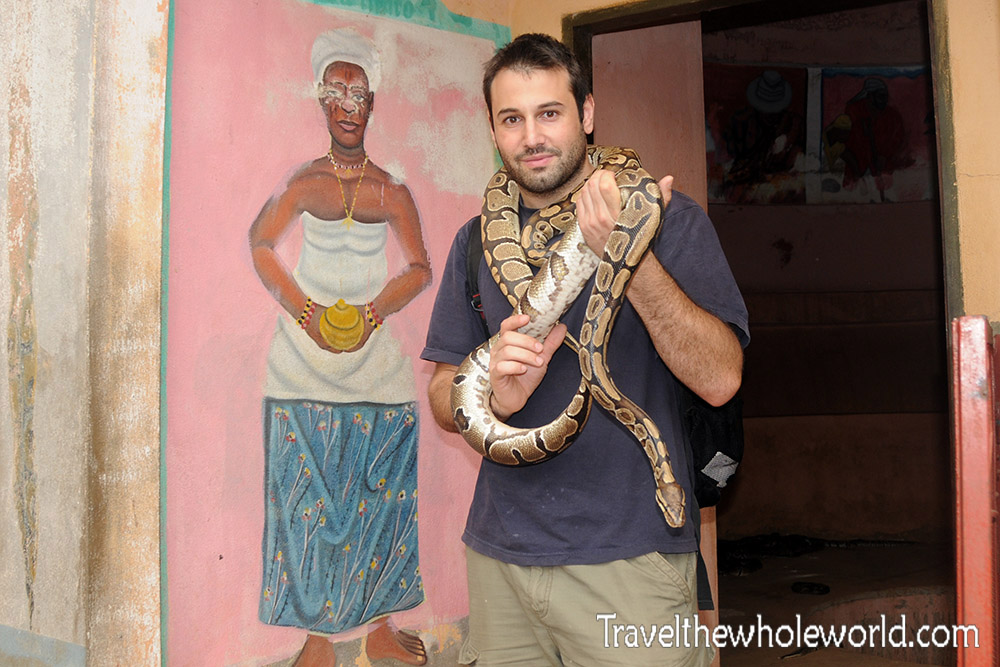 One of the first places I visited in Ouidah is the famous python temple. Not only was I a snake lover growing up, but I actually at one point had this exact species, the ball python. These are probably the most popular snake species kept as pets back home in the United States, so while they aren’t exactly exotic the temple is still an interesting visit. Snakes are highly respected in voodoo and are seen as a symbol of power. Many statues and references in voodoo culture often use snakes. 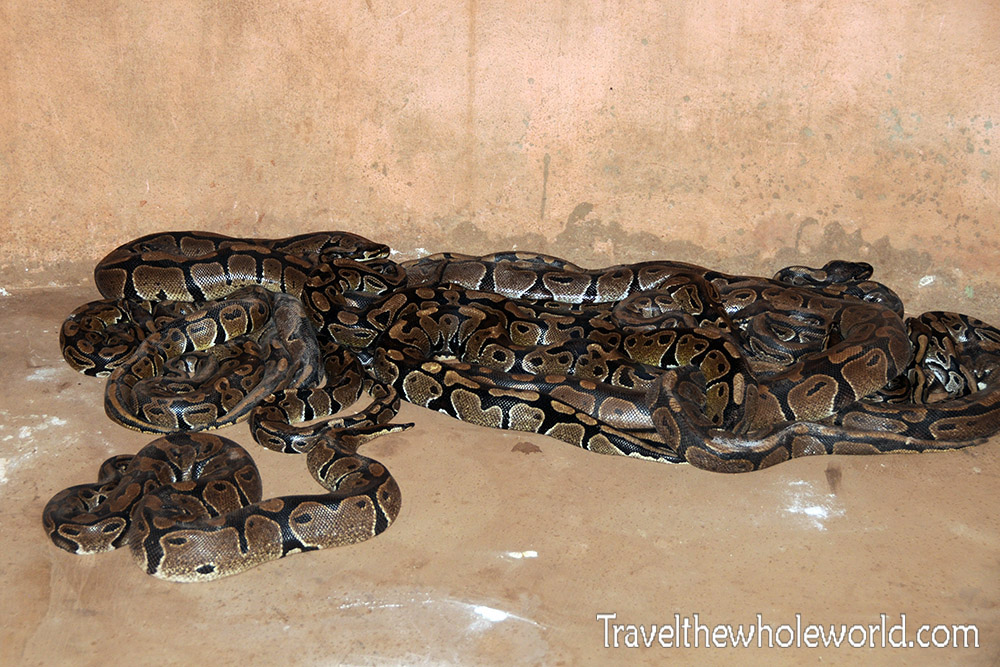 I thought that the snake temple in Ouidah was one of a kind, but other voodoo villages had their own snake temples as well. The ball pythons are of course non venomous and pretty tame. You can pick them up and put them around your neck without any risk of being attacked. Some of the other temples house different species of snakes; and one that I visited the snakes were so aggressive that I wasn’t allowed to go inside. 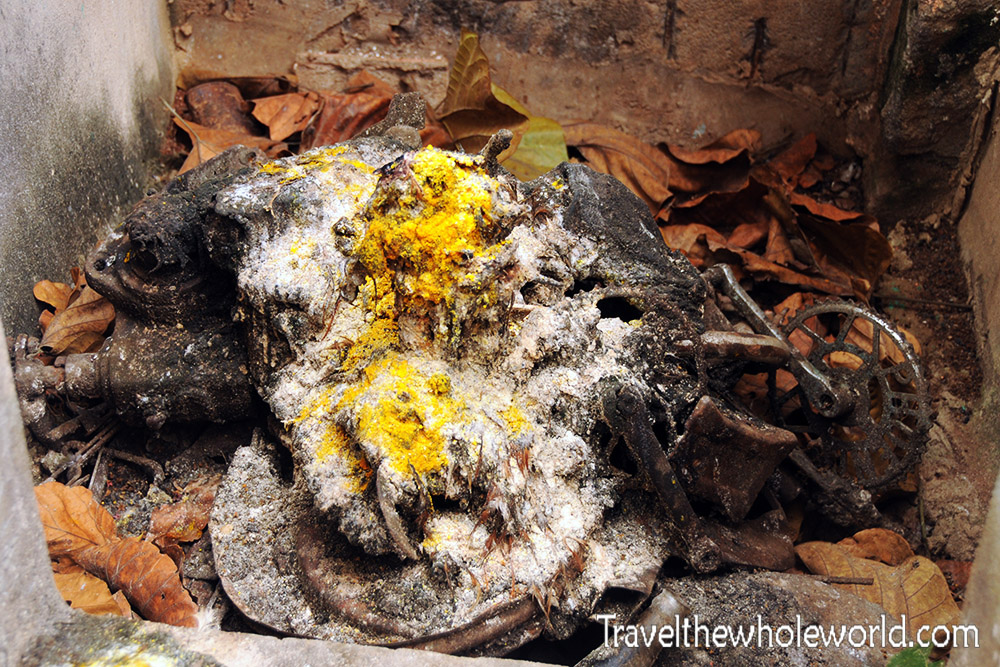 The voodoo temple also has things beyond the reptiles, such as precious metals and other effigies that are important to the voodoo religion. These two above and below are also from Ouidah. I forget the significance of the large ball below, but the photo above shows iron from the remains of some machine. It’s almost like every object is believed to have some kind of spirit and is respected. 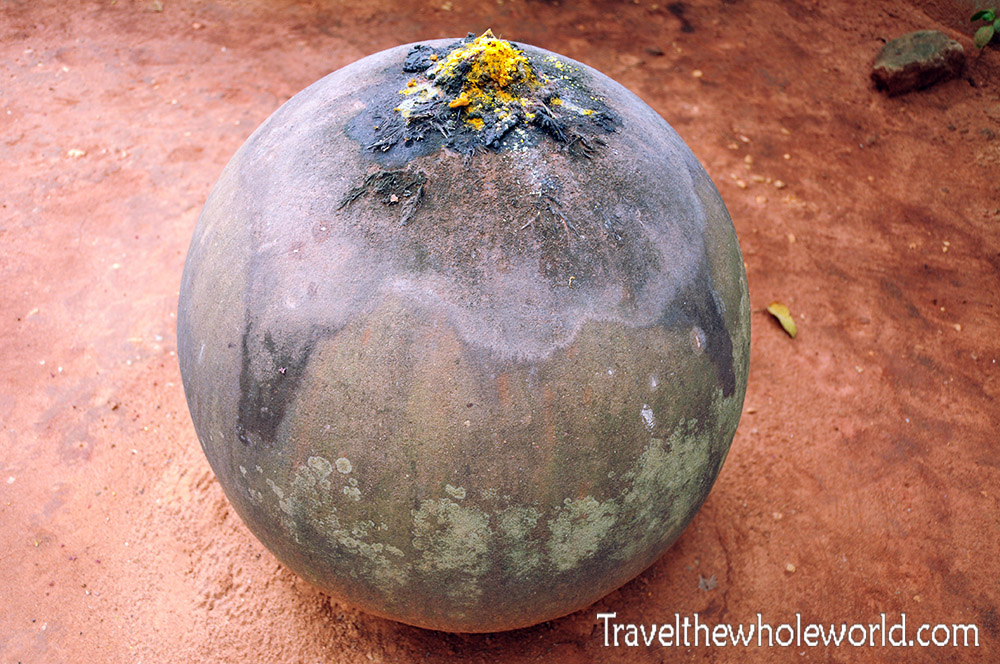 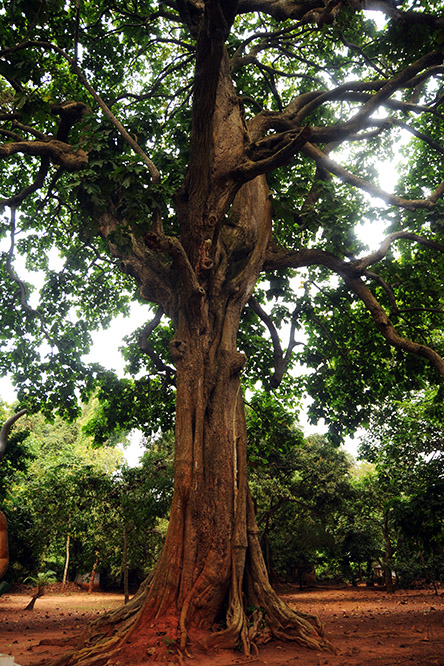 After spending some time along the Voodoo villages here it didn’t take me long to realize how much the religion respects nature. The large tree above is the most significant tree in another important place in Ouidah called the Sacred Forest. The Sacred Forest is the Mecca of the Voodoo religion. While there are several trees considered to be sacred in the area, this one above is the most important in Voodoo and is the center of the Sacred Forest. Nearby there is a rumor that some workers cut down a sacred tree and then slept by it, to find it standing tall again the next morning. Another local legend is that a priest living here is said to have lived a long life, and when it was his time he did not die but rather was absorbed into the tree. This is now known as the prayer tree, and many locals come here to make a wish. The voodoo priest on site made it clear to me that you could only wish for good things. Below is a local making a wish. 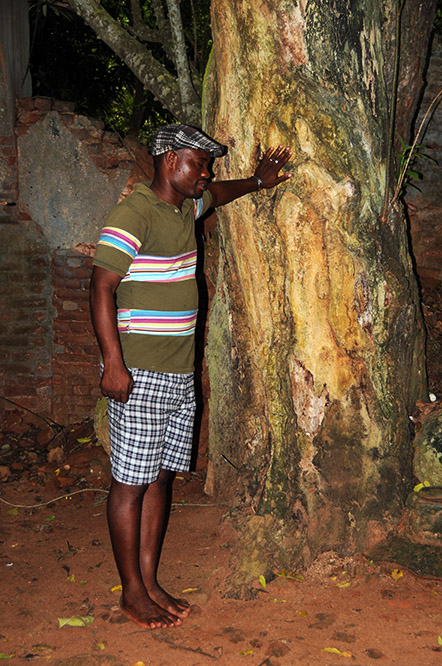 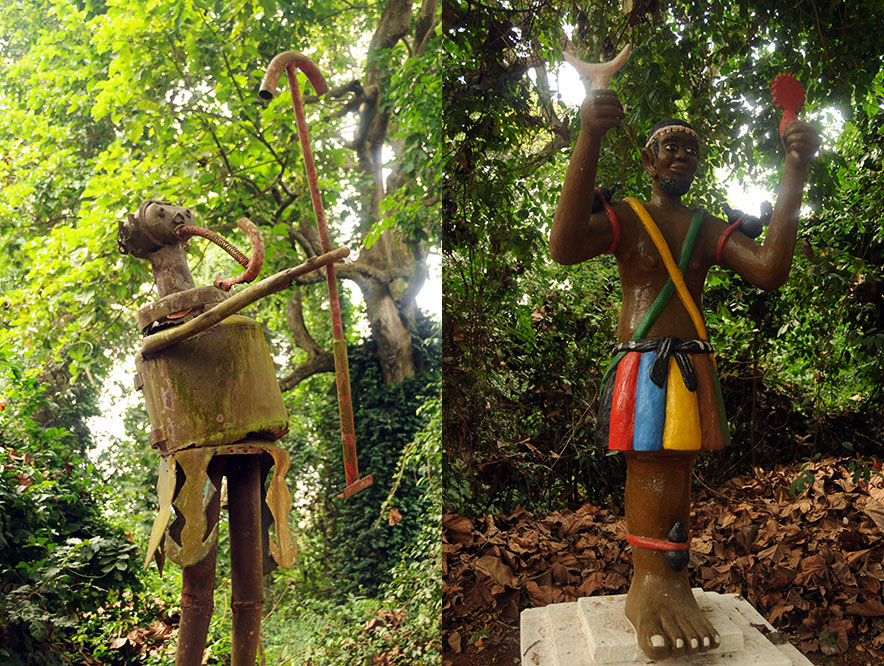 These top two photos were also taken from the sacred forest. There are probably about 20 figures here resembling gods others powerful spirits within the Voodoo religion. The first statue you see is the on the upper left is Voodoo god of thunder. The metal protruding from his mouth and the rod he is holding are both supposed to represent lighting. I’m not sure which ones are spirits and which ones are god’s at the Sacred Forest, but I know for sure this one on the upper right represents a powerful spirit. The single large foot is said to represent strength. There were other similar ones such as a spirit with two faces who could see everything. ANother one I found interesting was a three headed spirit that represented dead slaves returning from the new world. Their three heads was symbolic of their power and it’s said that it drove the African slave kings of Abomey from the region. 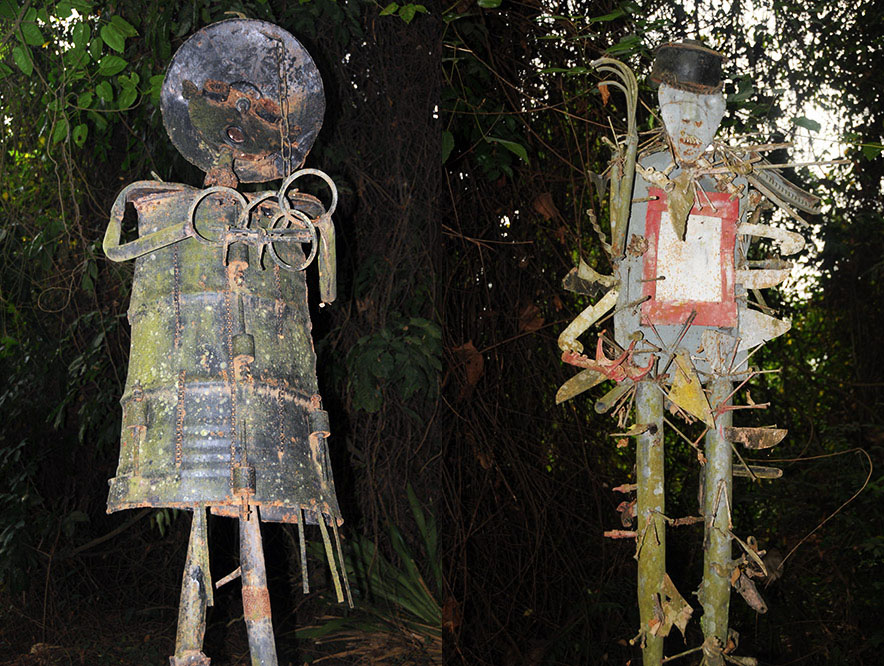 Lastly you might recognize both these above as Voodoo dolls, especially the one on the upper right with all the nails protruding from its chest. The one on the upper left is actually the god of iron, but on the upper right we do have a Voodoo doll. The priest of the Sacred Forest made sure that I understood that voodoo is a peaceful practice and Voodoo dolls has nothing to do with the religion. The concept of a Voodoo doll is actually black magic. There are several other tricks and spells from black magic aside from the Voodoo doll, but none of these techniques are actually related to Voodoo themselves. I was told that some colonial Europeans brought back a “black magic” doll as the locals called it, to Europe and explained that the practice was Voodoo, forever giving voodoo a false association of pain and death. 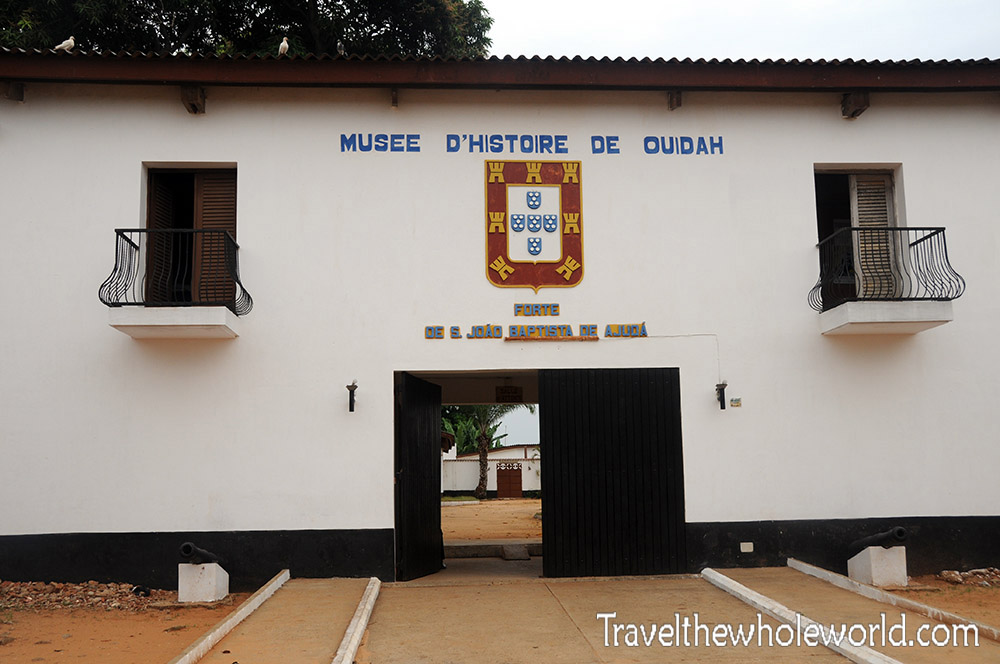 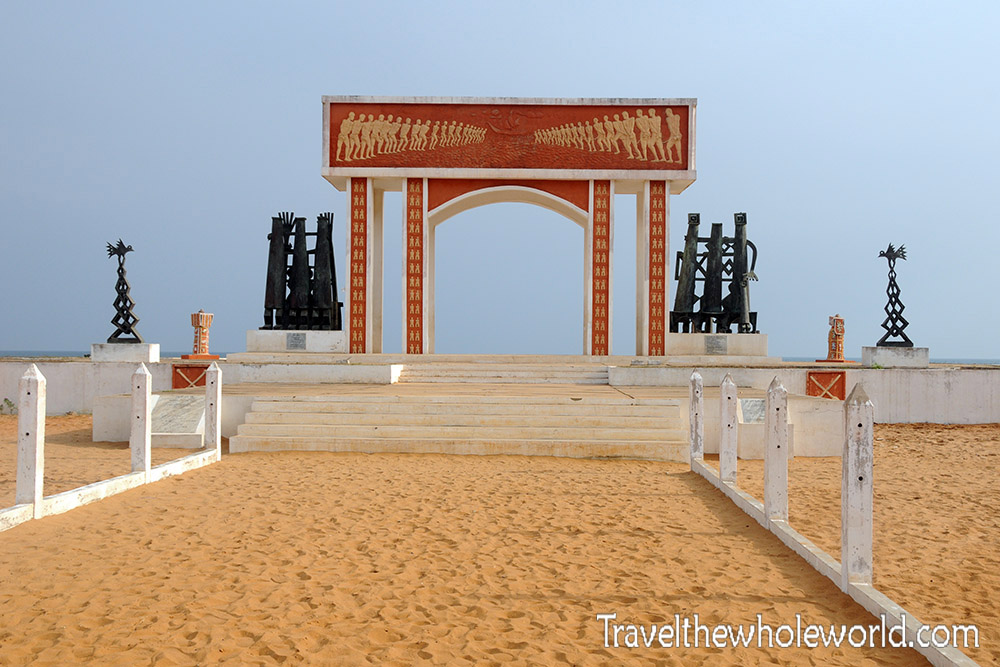 While Ouidah is famous for its voodoo, it seems it is equally famous for its history as a slave port and a strong hold of European colonialism. A former Portuguese fort in Ouidah has been converted to the city’s museum. The museum and former fort is photographed on the upper left. The museum wasn’t open when I visited so I could only photograph the outside, but I do know it has lots of artifacts and information on Ouidah’s history. This covers the two Beninese kingdoms of Xwéda and Dahomey which got power from the slave trade to the European colonization in the early 1900’s. On the right is a Ouidah’s famous Port of No Return gate, where slaves would pass through in order to border ships to the new world. Most of these slaves went to places like Brazil under Portugal’s flag. 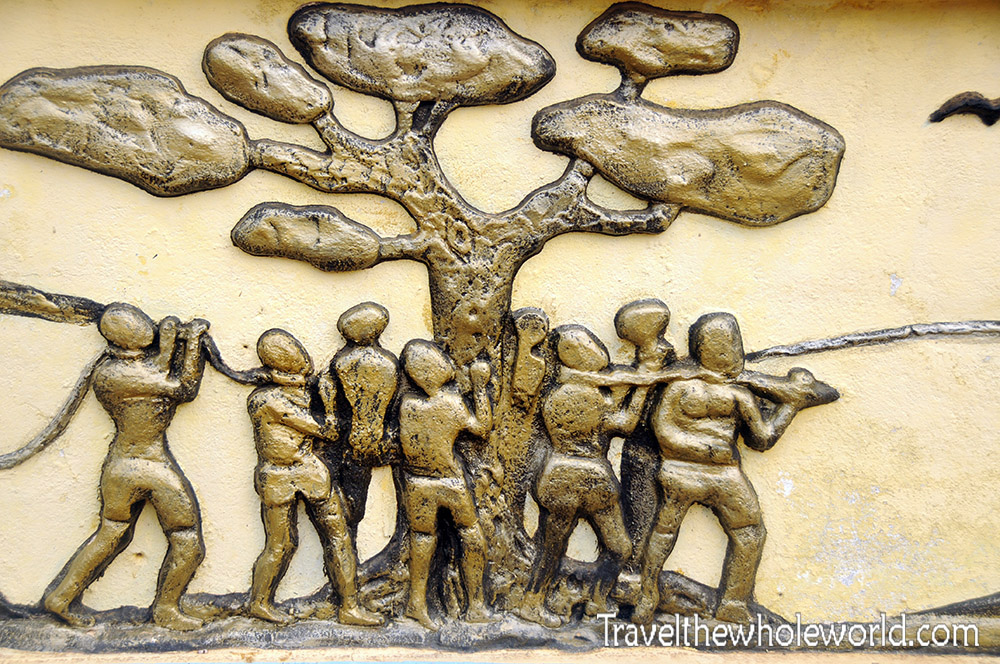 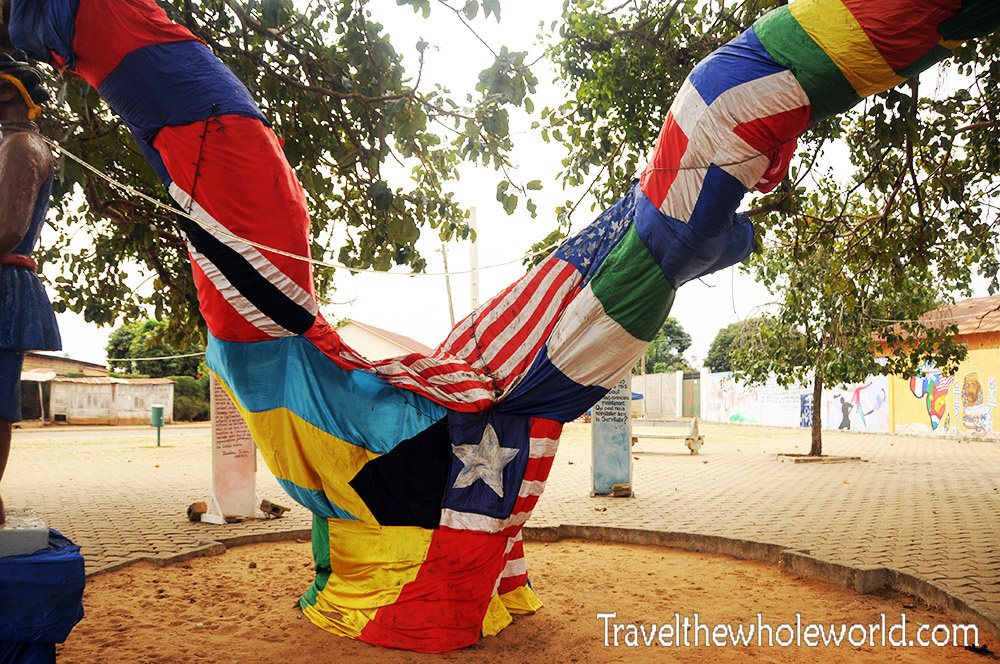 Nigeria had a belief that if slaves drank from a magic well before boarding the ships, the slaves would lose all their memory and arrive to the New World not knowing who they were. Benin had a similar belief, but instead of drinking from a well they had a special “Forgetting Tree” that had to be circled several times. The photo on the left shows an example of what it may have looked like to have slaves going around the forgetting tree. This photo on the right shows a tree in Ouidah that has been drapped with flags around the world that participated in the slave trade. 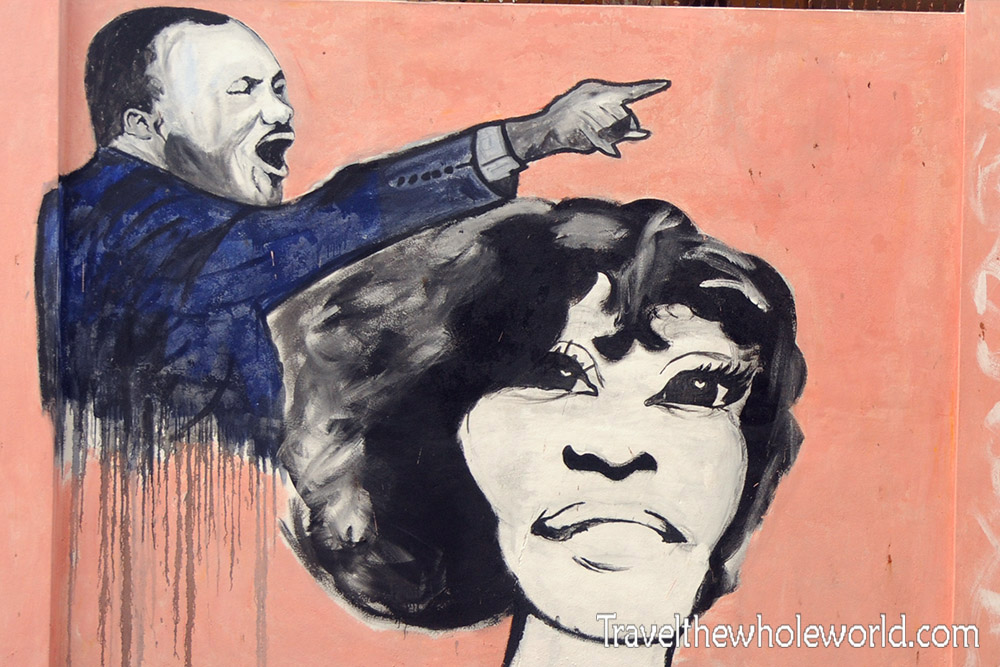 Nearby the tree that was draped with flags, I saw many paintings and displays of famous African Americans. I assume they did this to show their pride in African Americans, and as a reminder that their ancestral roots are in west Africa. The majority of the slaves from Benin went to Brazil, so it’s highly unlikely that Rosa Parks and Martin Luther King’s family came from Benin, but it is certainly possible! I asked a local man if he knew who either of the two were, and when he did not I gave him a quick story on each of them. 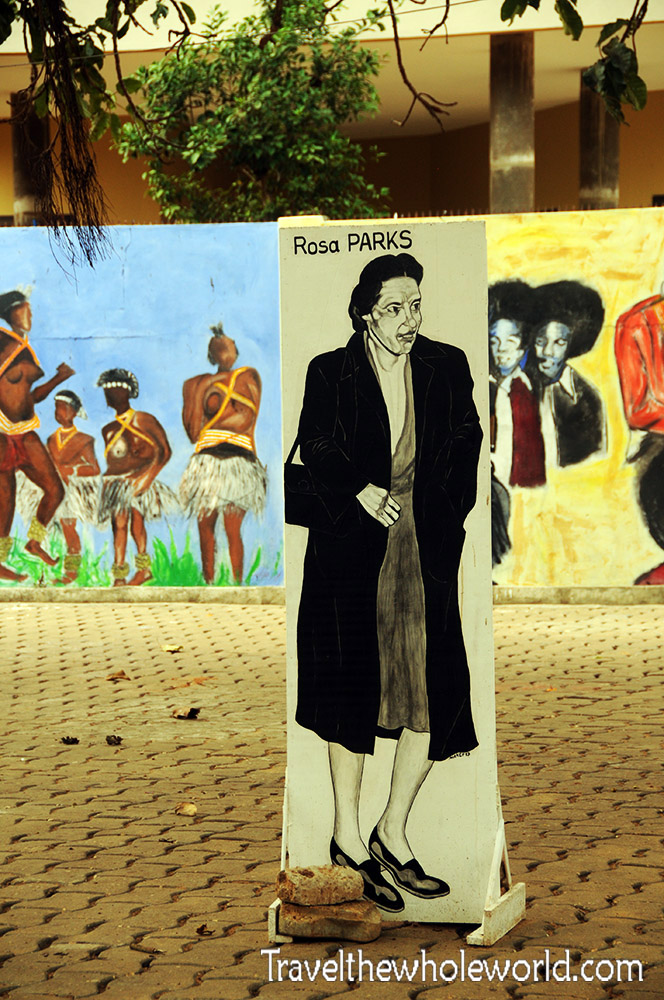