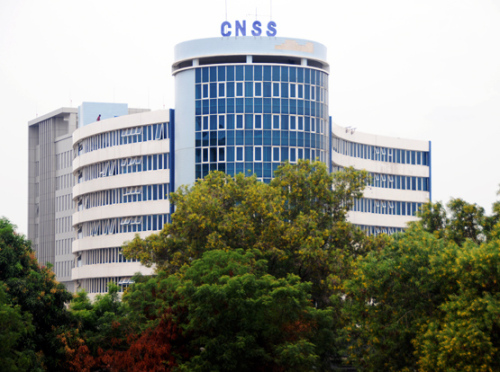 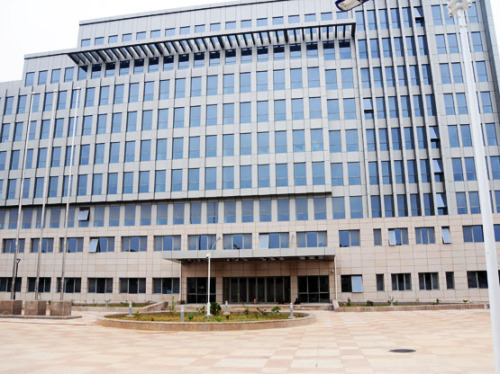 There are several modern buildings in Cotonou, but you won’t find any skyscrapers or high rises in the city. Cotonou is a clean city by African standards and the locals are very friendly. Most people here speak French so it was harder for me to get around knowing only English but using some international gestures and working with people you can always get any point across. 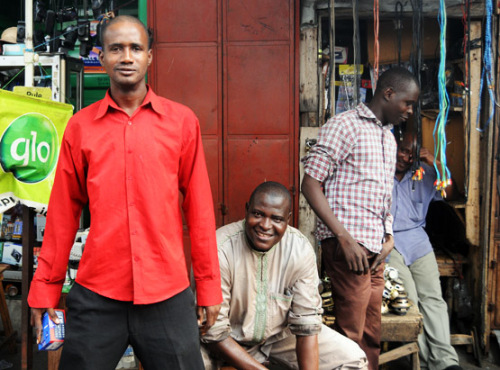 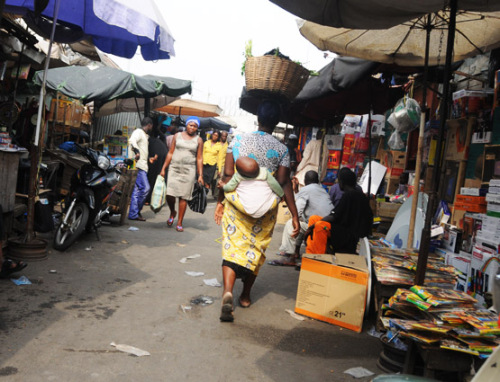 The big intersection I was at was right in front of the city market. Unlike Niger to the north, I didn’t find anything too crazy here like fried goat heads or other tasty items. The market is the biggest in the country and is pretty typical by African standards. The most interesting thing to do here was to explore and people watch. These guys on the left actually called out to me as I walked by and we had a conversation about travel, life, and other deep subjects. This woman on the right I noticed was balancing a large basket on her head while having a baby strapped to her back at the same time! 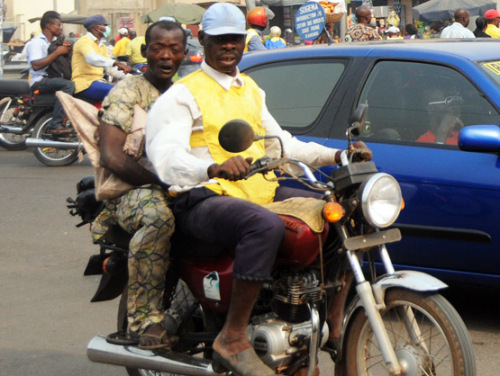 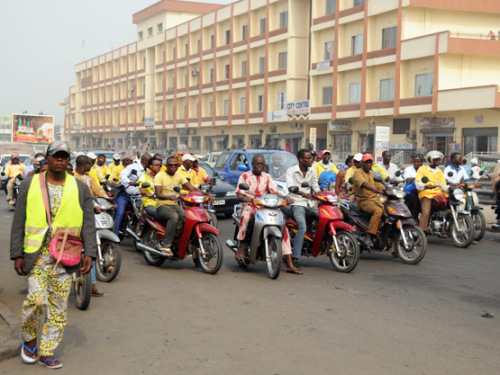 Cotonou has several high rises as I pointed out, but it’s not exactly a big city. There are several areas that are pretty dense with people and these photos above showed the busiest districts I came across. When I saw the big group of motorbikes and cars at a stoplight I couldn’t help but take a photo, even though by the expression of the guys on the lower suggests they didn’t appreciate it! If you notice the guy in the front is wearing a yellow vest, because these are actually motor taxis. I used them pretty often to get around the city and the prices are very reasonable. 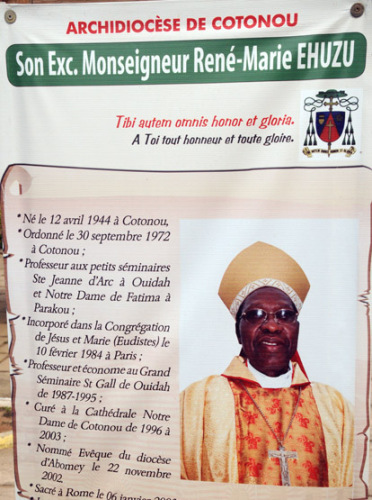 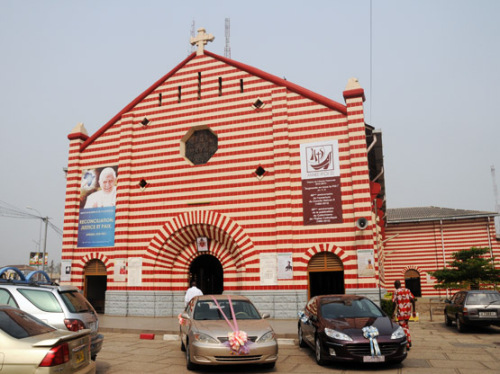 The most famous religious building in Cotonou is the Cotonou Cathedral also called the Notre Dame de Cotonou. You can tell the building looks unique from it’s red and white stripes. My picture of the cathedral iself is pretty bad, but there is a large bell tower that is not visible because of my angle. I happened to visit when a wedding was taking place. Above is one of the religious leaders of the cathedral and a photo of a statue of the Virgin Mary below. Because of the wedding ceremonies I wasn’t able to explore the inside of the cathedral. Outside were two Beninese guys who were the wedding photographers also using Nikon. I don’t speak French but the three of us attempted a short conversation about photography before I moved on. 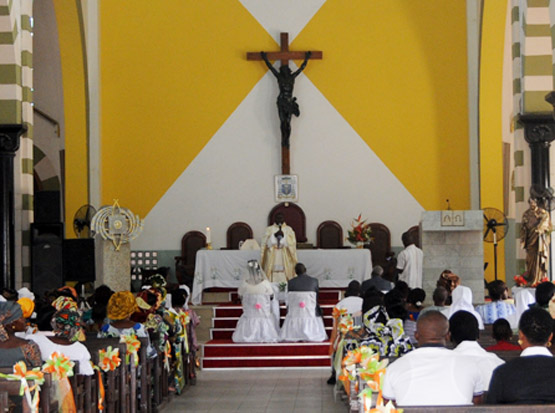 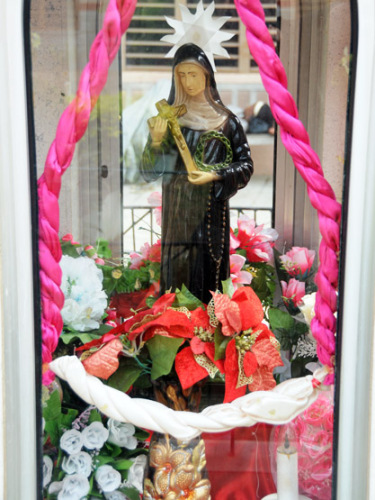 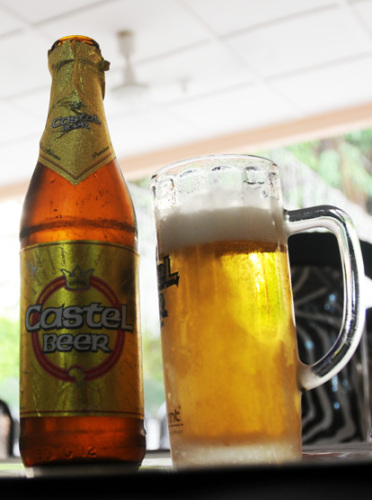 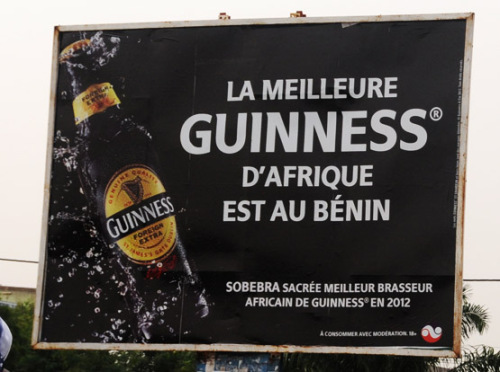 Something else you can’t miss in Cotonou is all the advertisements for beer. Most of the advertisements are for Castel and Libs beer which are locally brewed. Beninoise is also locally brewed and seems popular but I never saw advertisements for it. For some random reason the number one foreigner beer here seems to be Guiness. I personally love Guiness so I can say it’s definitely different here than what I get on top back in the US. I hear the Guiness served by the can in Africa is an older formula and it’s definitely much darker. 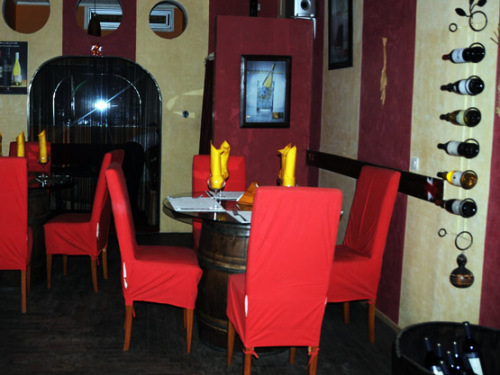 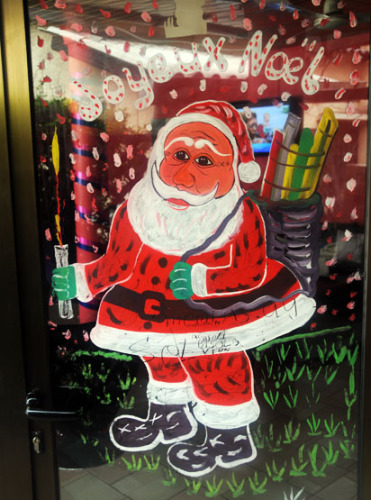 Haie Vive also has a diverse variety of international restaurants. Of course there is no Mexican food, but otherwise you can find lots of African, Middle Eastern, European, American foods and even a sushi bar. Many of the restaurants in Haie Vive are Lebanese owned even if their main dish is something like pizza. Below is some Lebanese food I had for lunch. I noticed that everytime I went to lunch even on the weekends, the restaurants were almost empty, come evening they were packed. On the lower right is an advertisement I saw for some Brazilian music. 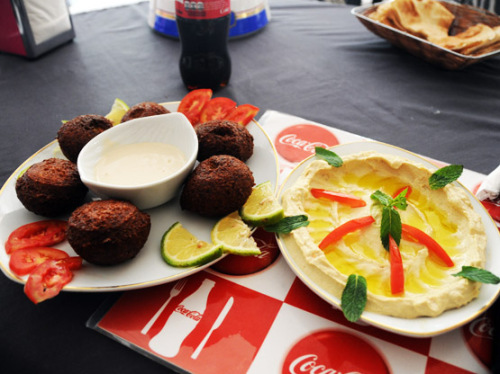 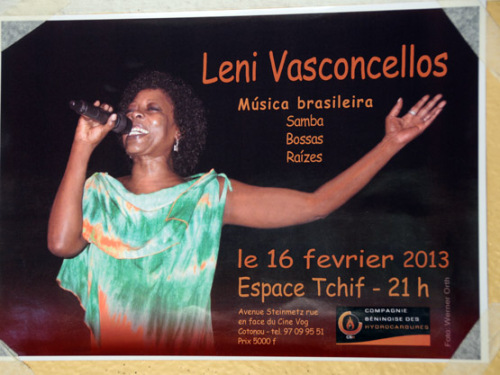 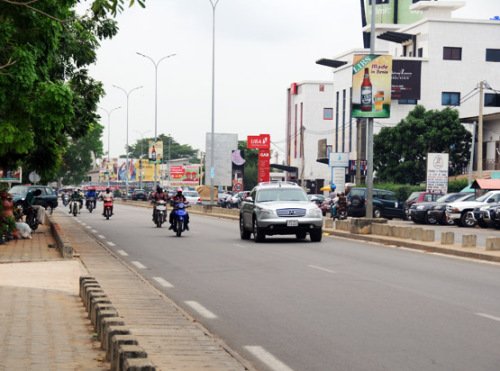 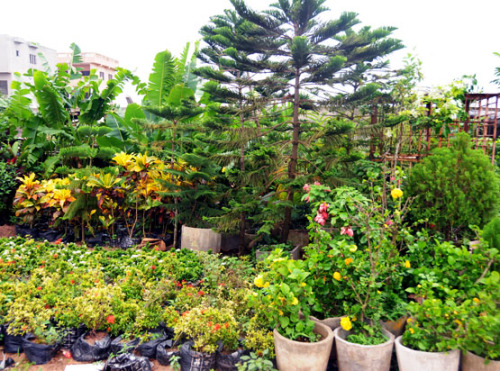 Above are some random shots from one of my walks. The streets are clean as I said and traffic isn’t too crazy. I had spent hours in traffic in neighboring Nigeria only a few weeks ago and it was certainly torture. Cotonou is much more laid back and traffic never was an issue for me. This walk I did didn’t do much for me, but I did come across a nursery. So it seems that if you have money you can mostly get what you want in Benin. 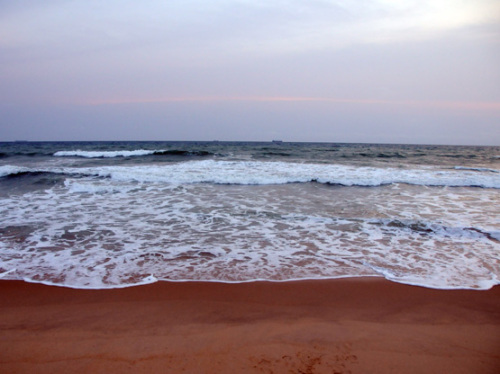 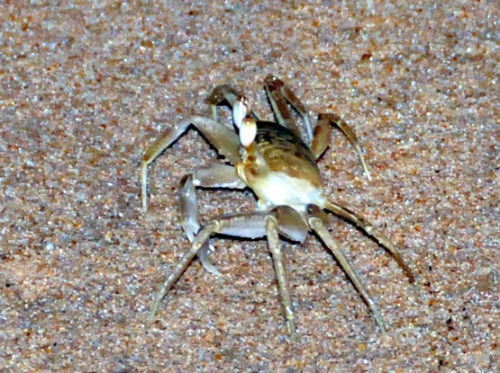 Cotonou has its own beach that is sporadically clean then parts that are dirty. There are some large mansions built here and lots of luxurious houses in gated communities. I didn’t swim at this beach but I did swim farther west in Grand Popo. Normally I try to avoid swimming directly in front of large cities cause the water isn’t so clean. The beach had few people on it despite being a nice day. There were definitely more big ole crabs like this guy on the upper right than people! It took only about 15 minutes or so to walk to the beach from Haie Vive. Once on a motorcycle ride my driver didn’t understand what I was saying and took me on the opposite side of the city to a really luxurious resort area. 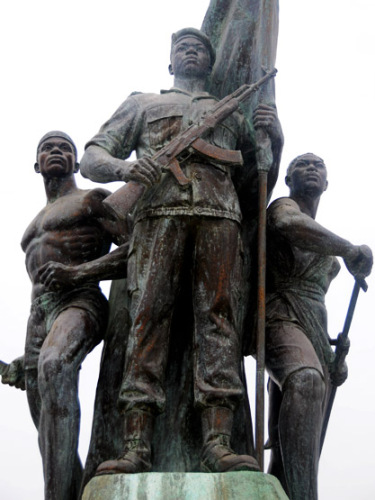 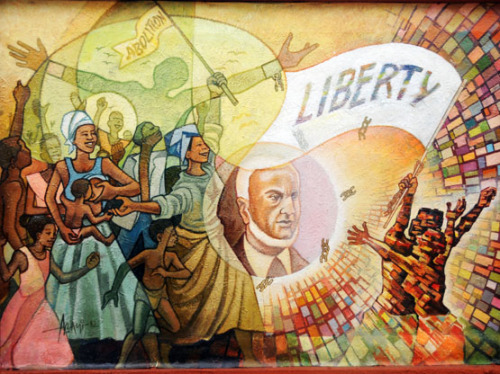 One day in Cotonou I did some very random exploring. I walked at least a mile along a main road until I came across a whole lot of nothing. Then I turned around and went a mile in the opposite direction. That’s when I came up to this memorial photographed on the left. A few guys were sleeping directly under the statue seen to the left and even more were sleeping under the trees that surrounded the park. Around the base of the memorial were lots of murals depicting Beninese culture and events such as their independence. 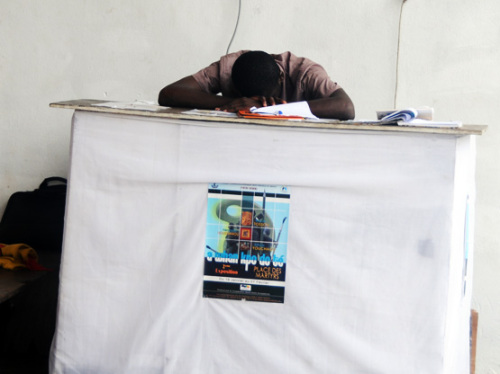 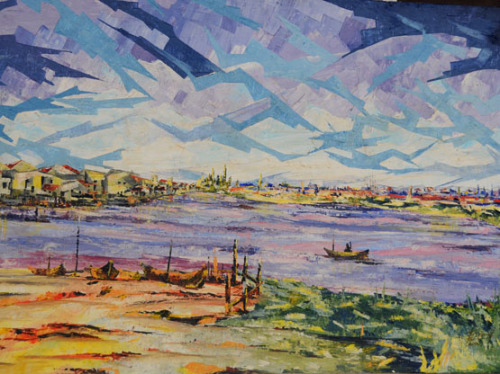 Directly under the memorial was some art work on display. I figured there was no photography allowed here but fortunately the guard was in a deep sleep. The photos above are from outside, but after walking around I found there was also an indoor art gallery as well. There were lots of people inside and they didn’t seem to mind my photography. The were a few dozen pieces of art on display including paintings, woodwork, and some creative dark creations like the skull on the lower right. 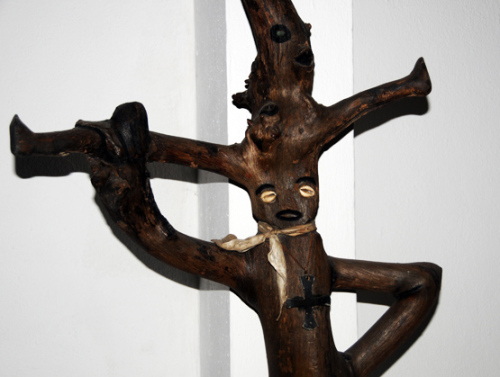 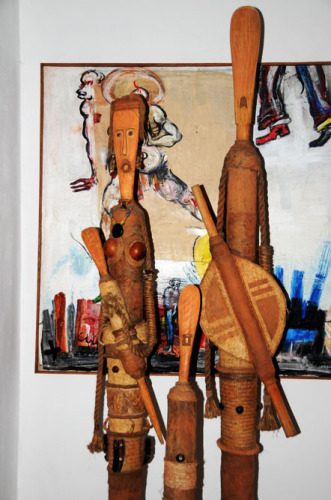 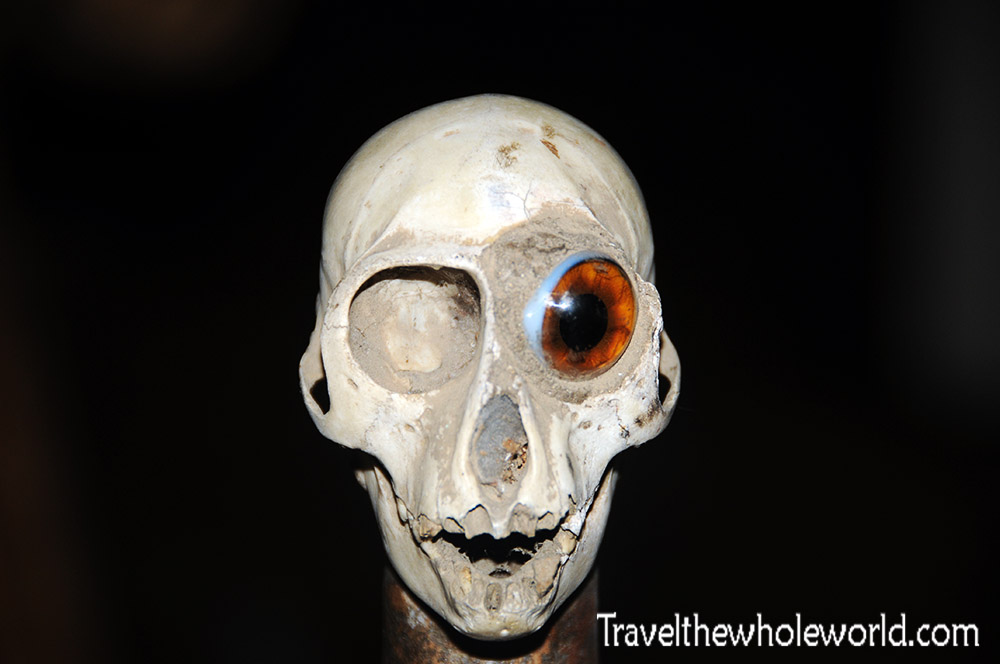