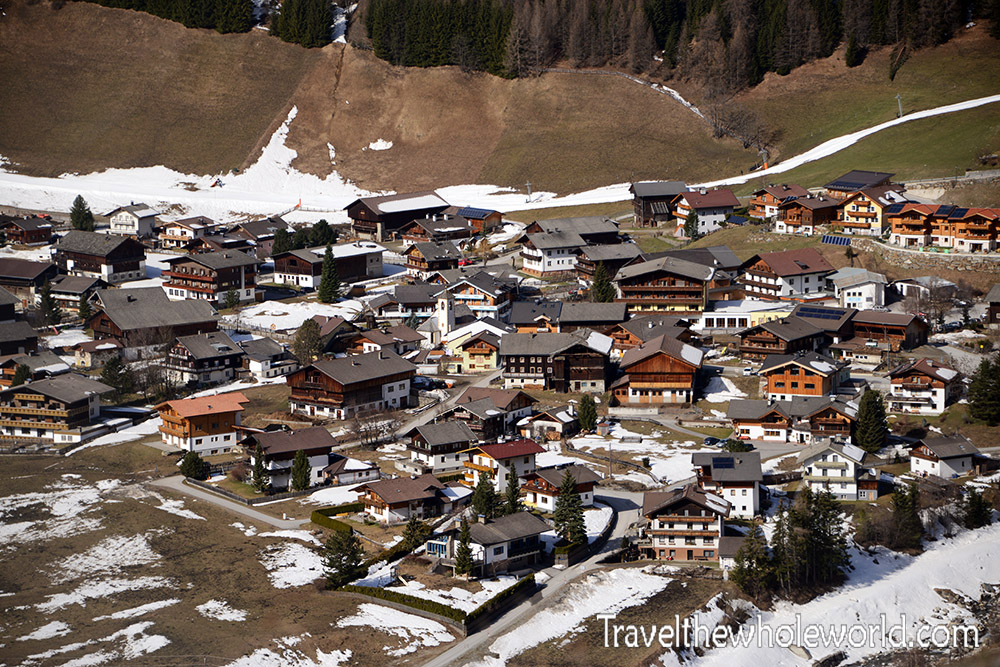 The beginning of my climb up the Grossglockner started after driving up a windy road to a parking lot in Lucknerhaus. On the way there I passed some small towns like this one above known as Grossdorf, with their small church below. These small towns where were mostly without snow as winter was withdrawing for the year, but after I reached the Lucknerhaus a short drive later I saw the snow was still deep. The Lucknerhaus wasn’t even worth photographing. It was more of a large lot where people base their mountain adventures, but there was a guesthouse with a restaurant. I didn’t realize how popular mountain huts were in the alps until this trip, but apparently it’s a tradition that’s gone for hundreds of years. While climbing in the mountains you’re normally not too far from some kind of refuge if you need it. You also get to sleep in a hut instead of fighting the elements in a tent! 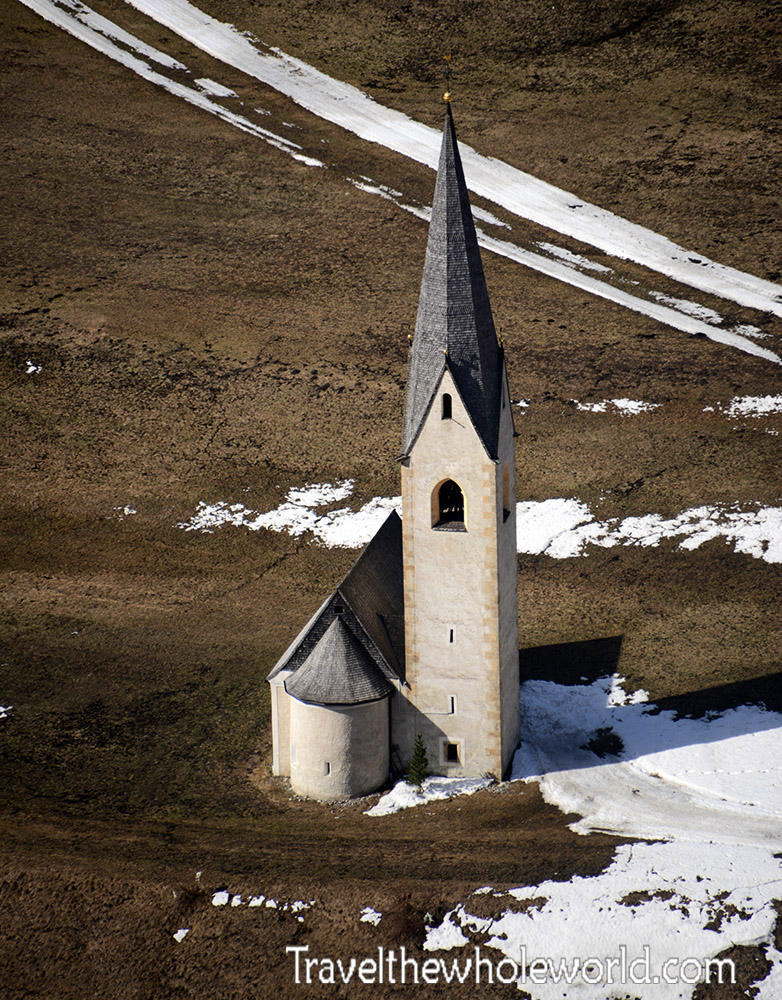 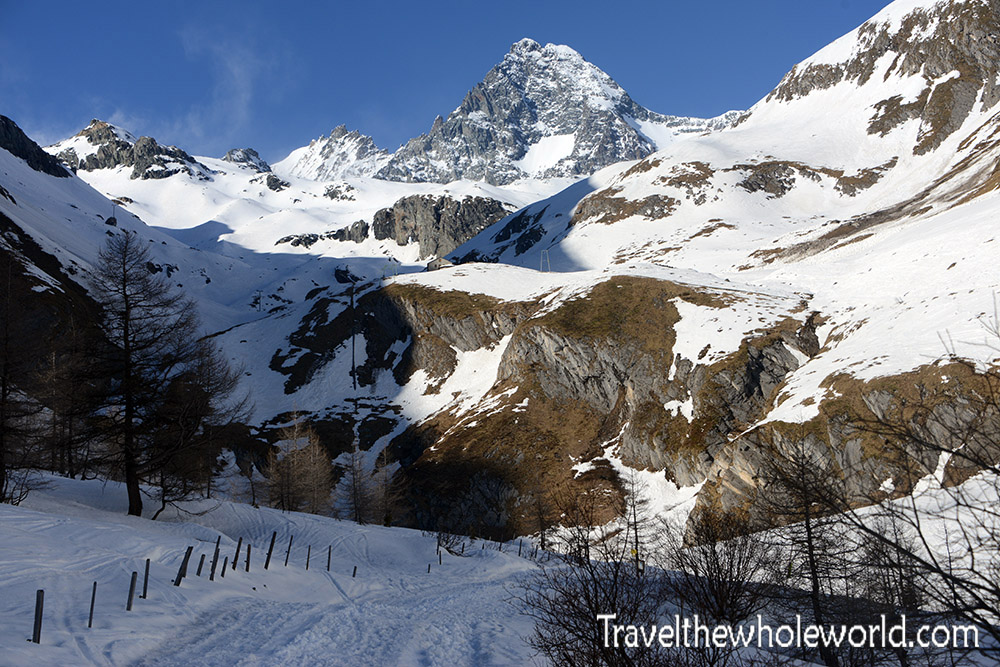 In the very beginning of the climb, I had a great view of the entire mountain. The summit of the Grossglockner almost looked more than two days from here. The normal plan by most climbers is to hike to one of the huts that sits close to 10,000 feet (3,000 meters) and spend the night there. Then the next day do the remaining 3,000 feet (1,000 meters) and summit. 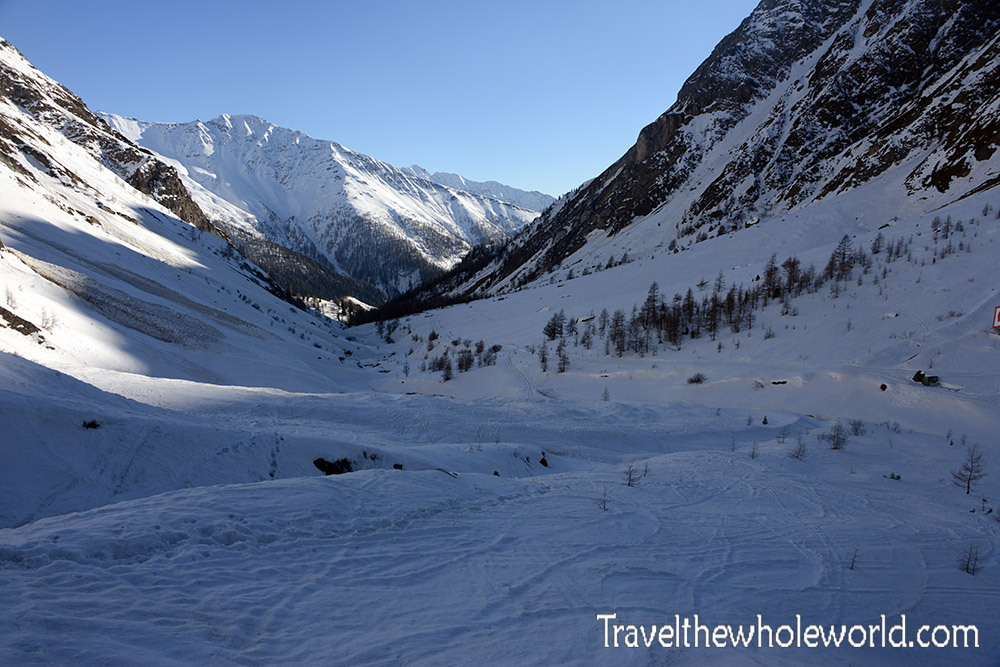 I started in this valley taking the first steps of what would be a total of 6,000 feet (almost 2,000 meters) of elevation gain. Fortunately since the peak isn’t high altitude, acclimatization isn’t a problem for such a quick rise in elevation. 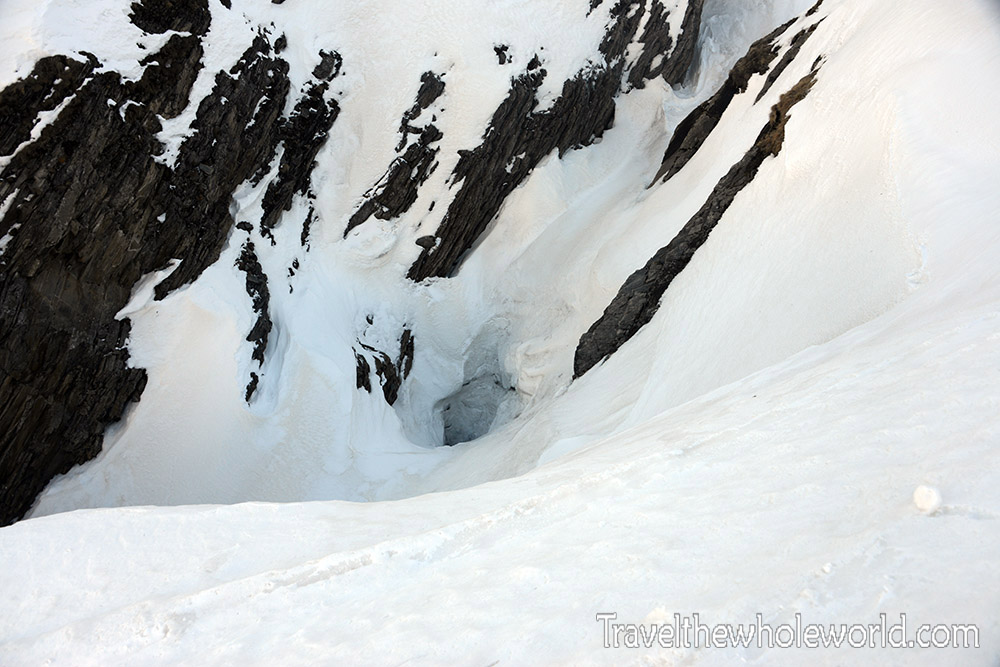 The terrain wasn’t yet very steep, but there were definitely some places you don’t want to slip into. This photo shows one of the steep sections that I passed by. At the bottom of the slope was a scary hole just big enough to swallow person! 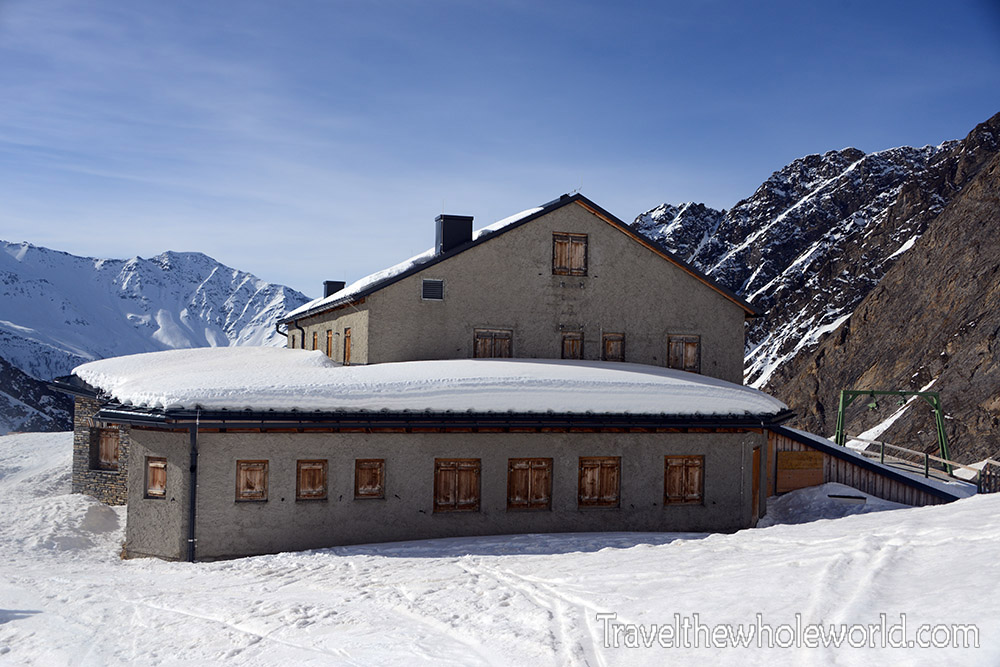 After an hour or two, we approached the first mountain hut photographed above. The hut is closed during the winter, but since spring was approaching it would be opening probably within a month. 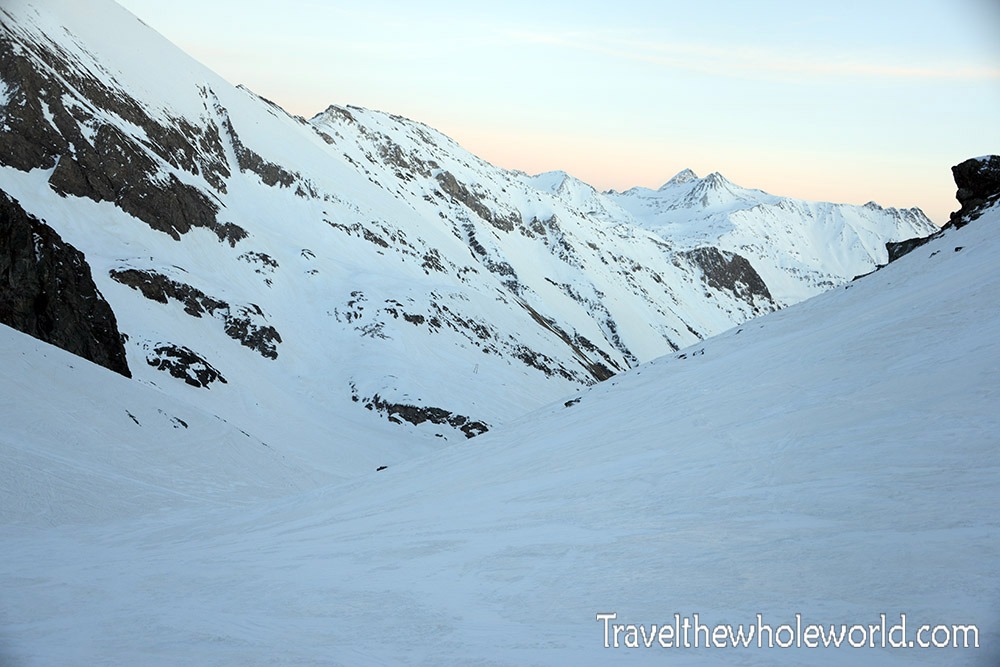 The valley seemed to consistently rise at a moderate level, but towards the very end we encountered some steep terrain. I was very far away from my top levels of fitness for much harder mountains like Denali or Aconcagua. Carrying my 40 lb (18 kg) pack along with not being used to the altitude of 10,000 feet (3,000 meters) was definitely a challenge. The challenge though was exactly what I wanted. This was my first return to the mountains in my preparation for Everest! 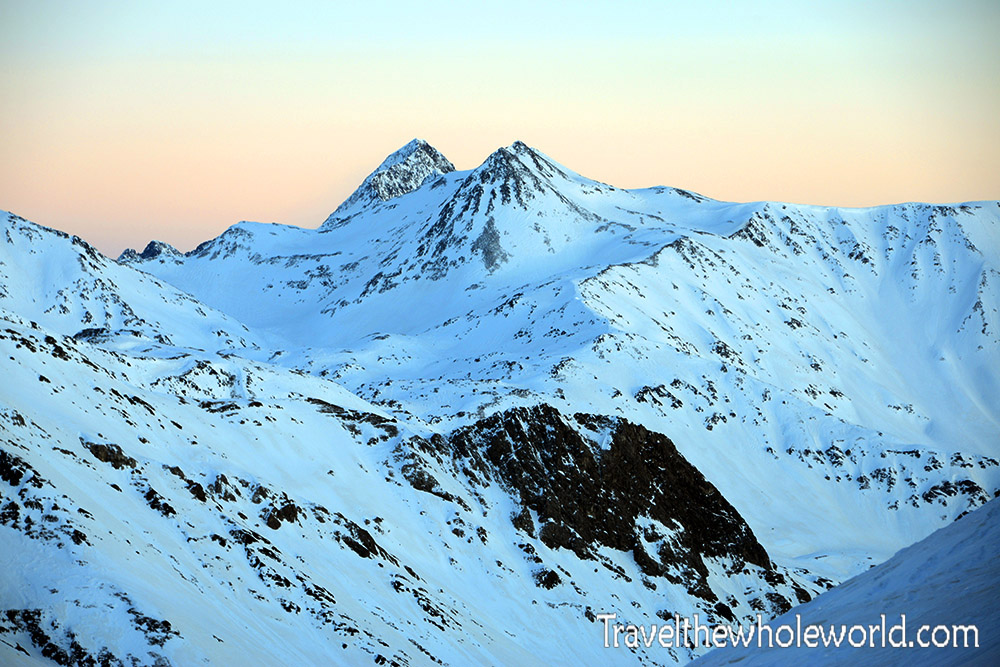 I slowly forced myself up to the ridge and found myself right in front of the Stuedlhuette. This photo shows another shot looking down the entire valley. It was right here where I saw perhaps one of the most beautiful views in the entire Austrian alps! 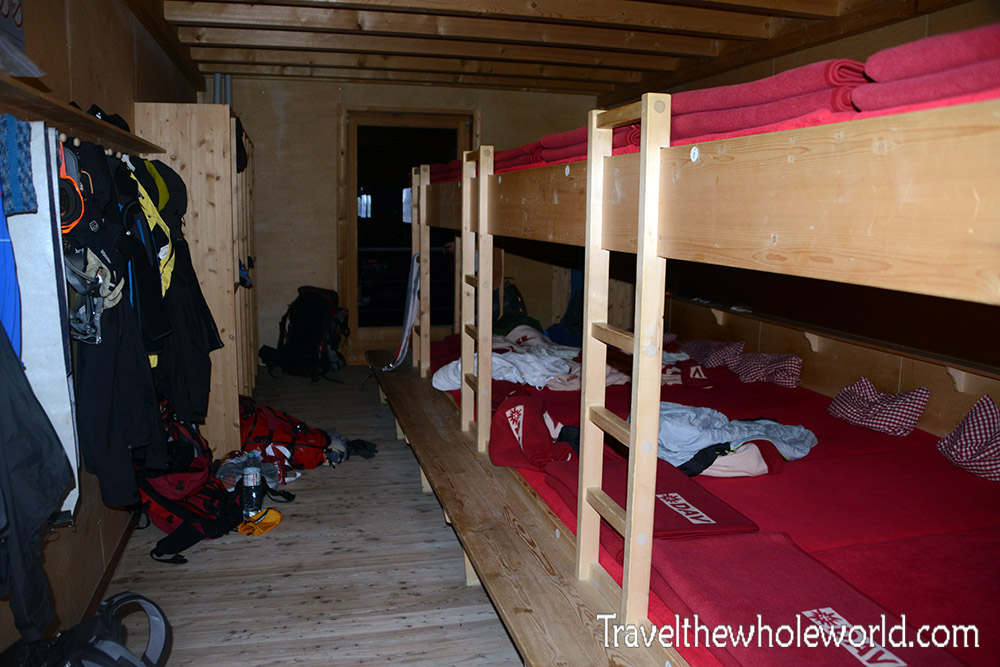 For some reason I didn’t take a photo of the Stuedlhuette itself, but it’s a giant blue hut with multiple floors on it. At first I kind of felt it was cheating to spend the night here rather than camping in a tent. I’ve spent weeks if not months in a tent while climbing if you add up all my trips together, so I was happy to have a normal bed. The Stuedlhuette actually has a nice restaurant and a good selection of beer. You’ll see a beer in front of almost everyone while you grab dinner. The price is pretty steep though, nearly $50 per person! Part of the reason why my pack was so heavy was because I carried food for several days. I couldn’t resist the food they were serving though, but after my $50 dinner I started to feed myself to avoid going broke. 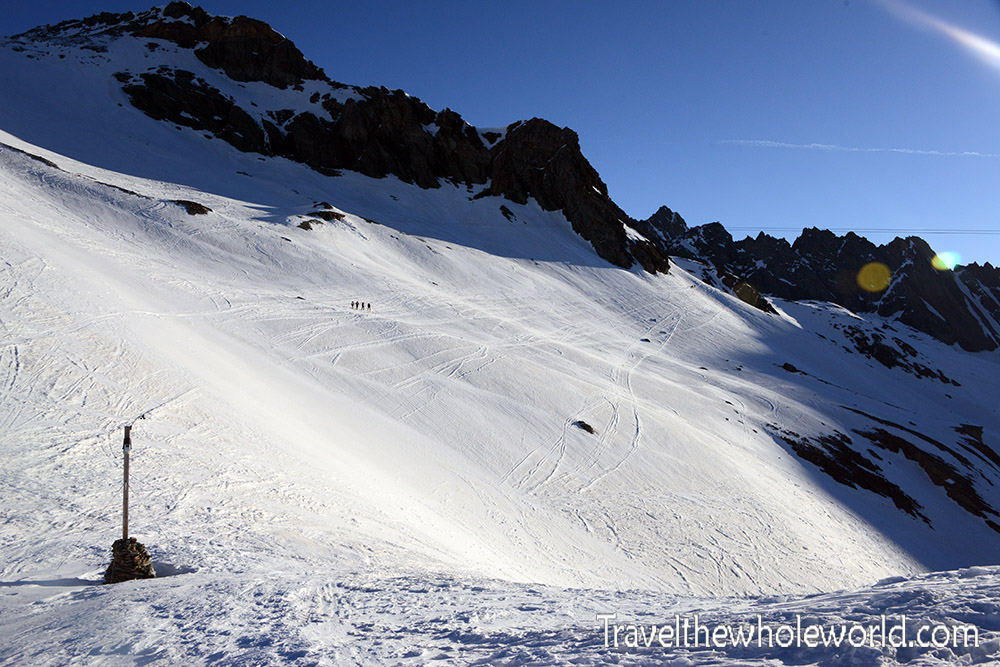 Early the next morning we began our attempt to summit the Grossglockner. The first day’s challenge is this moderate traverse. It’s not steep enough to need an ice axes so we just threw on crampons and hiked it. I should also mention that nearly every single person on the Grossglockner seemed to be carrying skis so they could fly down the mountain after summiting. I’ve only gone skiing a handful of times so I wasn’t prepared to ski down, but it’s something I’d like to get into. After going along the first slope on the left there was some moderate uphill climbing. The photo below shows another view looking back at what we just covered. 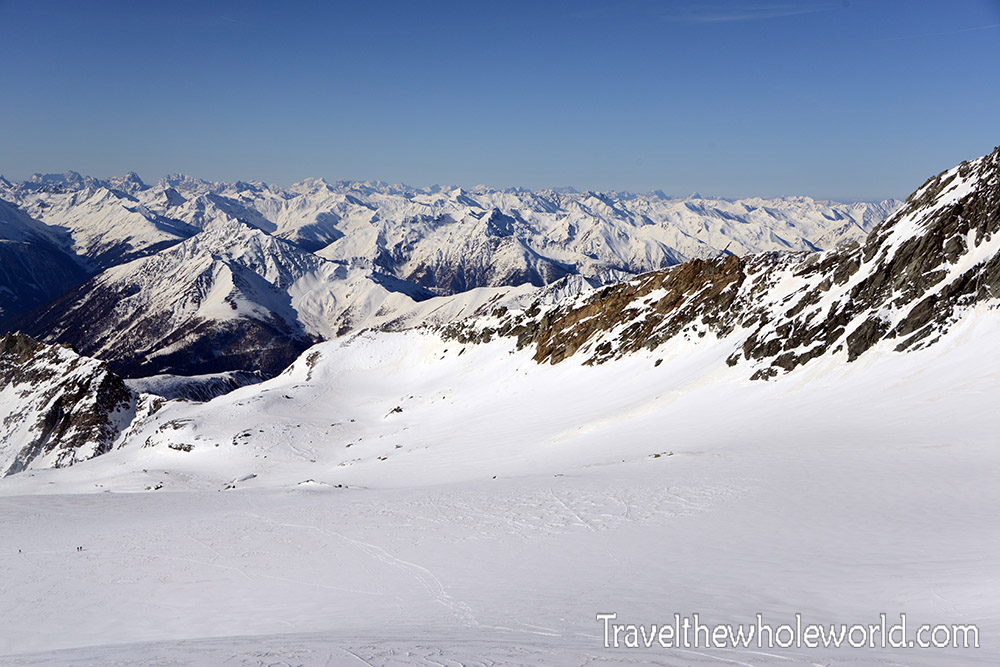 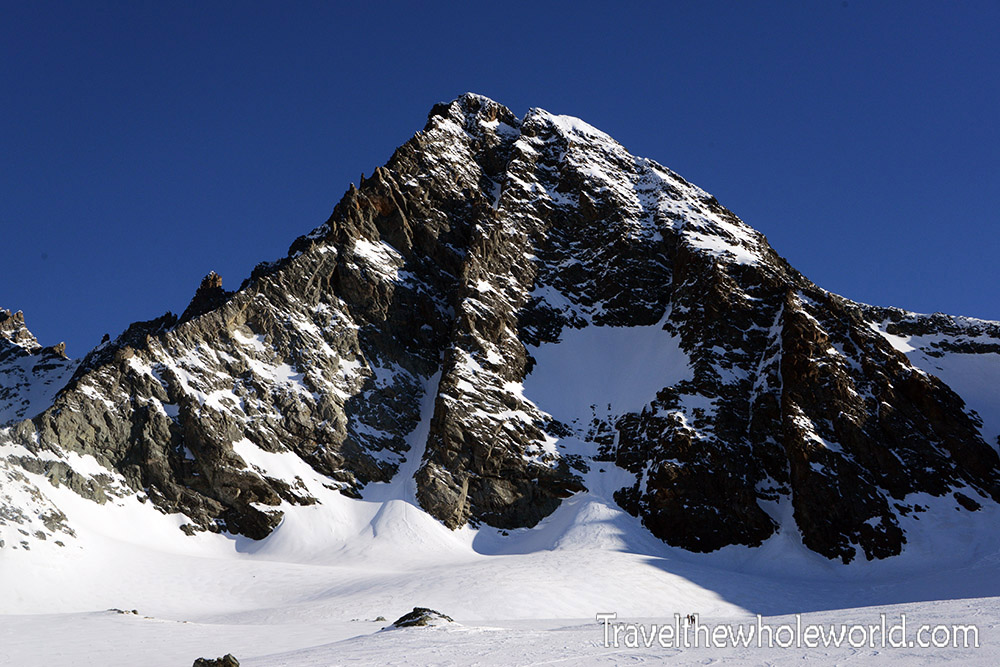 After this traverse and climb there was a great view of the Grossglockner’s summit. From here we actually hiked away from the peak in order to climb a moderately steep bowl that eventually led to a rocky ridge. The rocky ridge had a cable attached for added support, but wasn’t all that necessary. Going up I felt the ridge wasn’t too long, but when we descended on the way home it seemed to be twice as long as I had remembered. 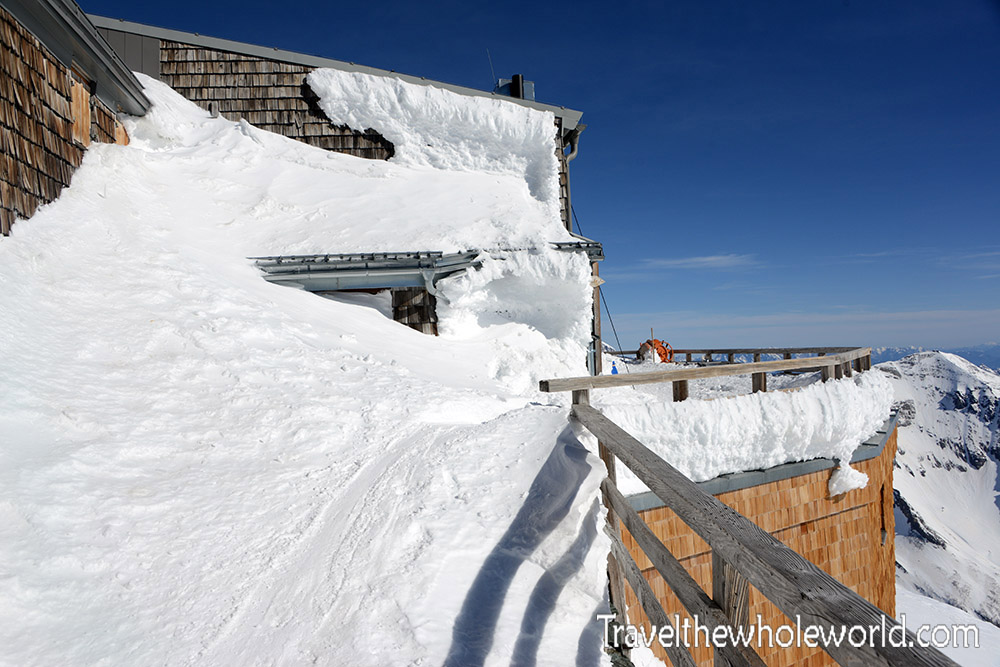 It’s possible we spent 30 minutes or more going up the ridge. After reaching the top I came across the Erzherzog Johann hut. This was covered in deep snow and didn’t look like it was going to be opening anytime soon! 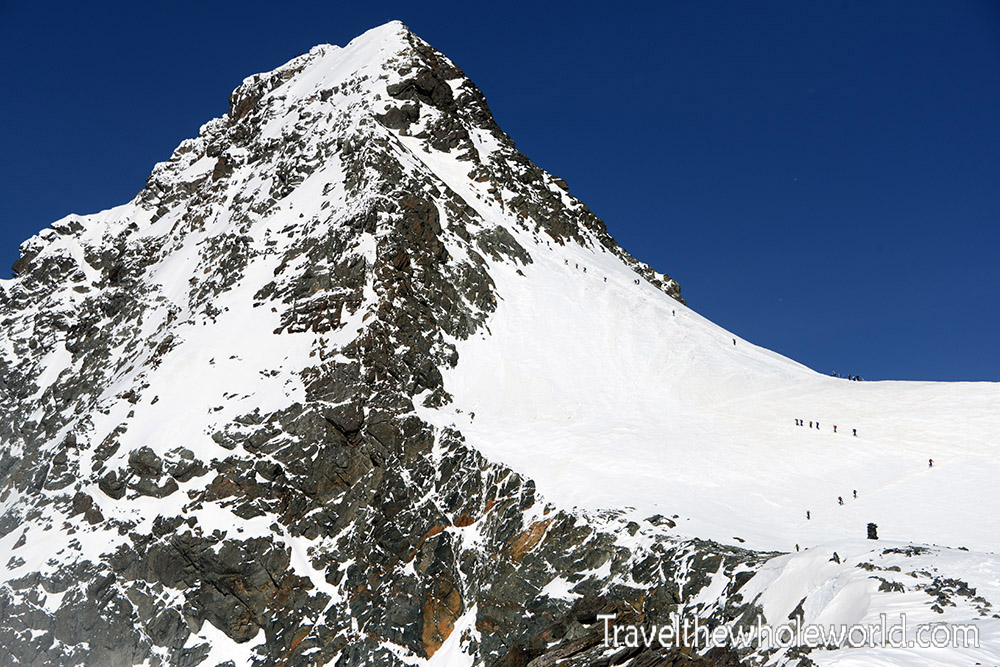 At this point we were nearing the final challenges of the Grossglockner. There was a nice flat walk to the base of the summit followed by the steepest terrain we had yet. At this point we abandoned our ski poles and switched to ice axes for the remainder of the climb. 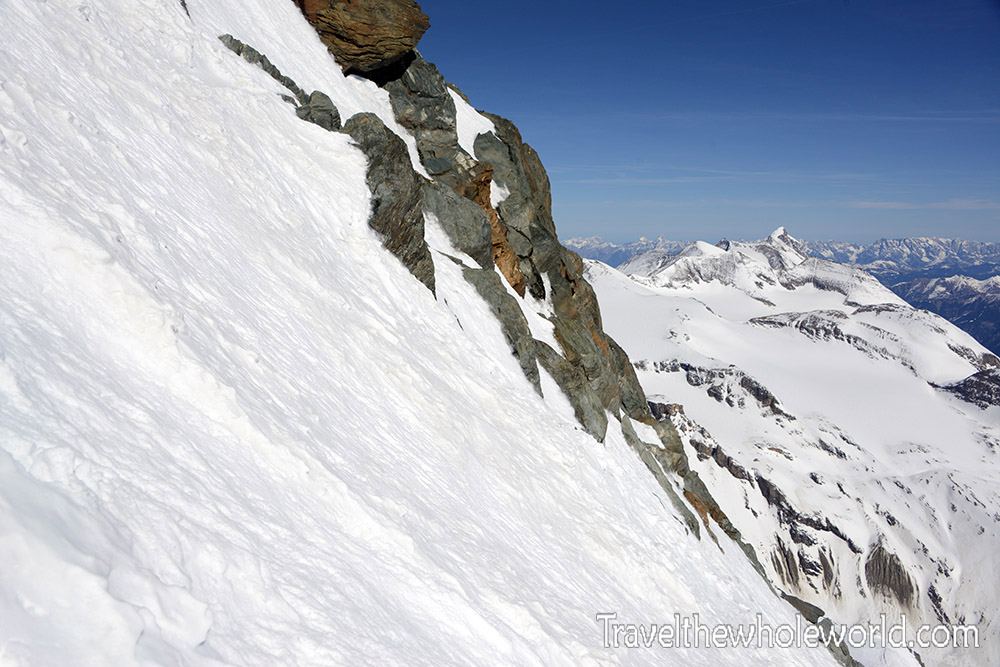 I took the photo above while ascending up to the summit ridge. This section had extremely deep snow, so I think even if you slipped you’d likely fall into the snow rather than slide down; not that I was prepared to try! 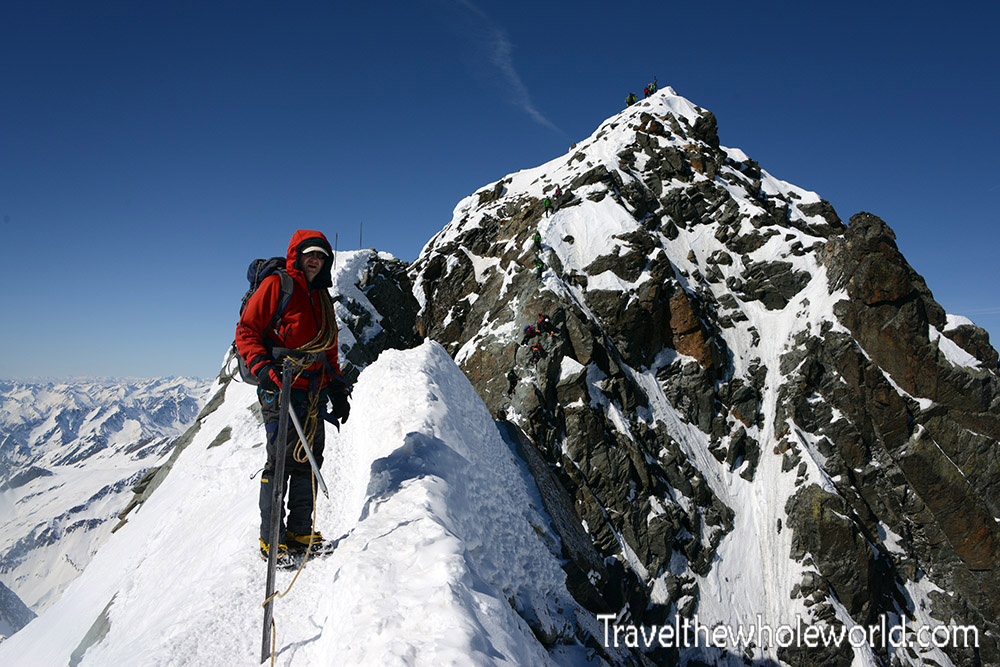 After making it to the ridge, we were now on some every exposed terrain. On either side was a significant rocky drop. There were even a few areas that were only a foot wide with nothing to attach yourself to. Any slip here would seriously mean death! For the most part, there were anchor points and poles in the mountain that you could clip into. 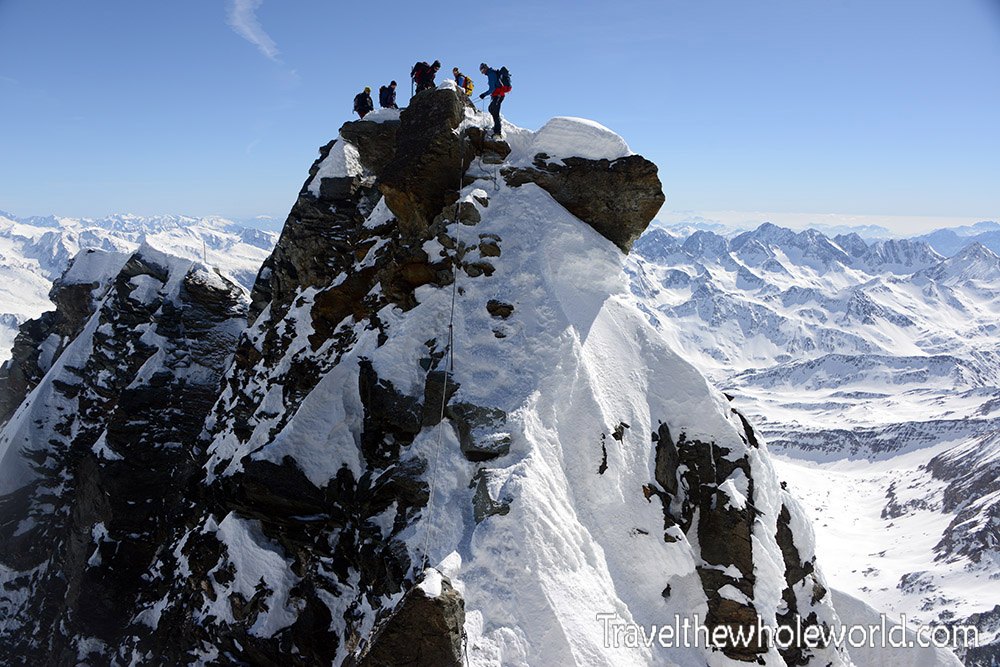 Once past the ridge, which only takes a few minutes, you reach the famous Glocknersharte. This is the final climb to the summit and is the most technical part of the mountain. The Glocknersharte is sort of a saddle, that requires you to descend briefly before climbing back up. 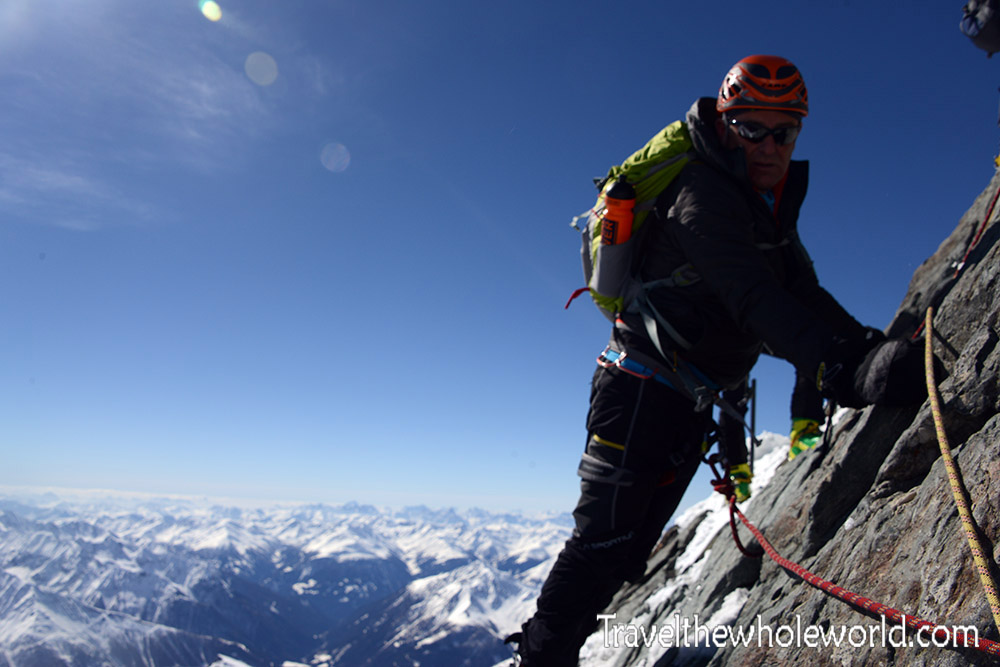 I had actually hoped to have the entire summit to ourselves during this time of year, but there was actually a few other teams on the mountain. At this section of the climb there is little room for passing so there was a bit of a traffic jam near the summit. In the photo above a climber descends while I try to pass. In the photo below you can see climbers just below the summit. 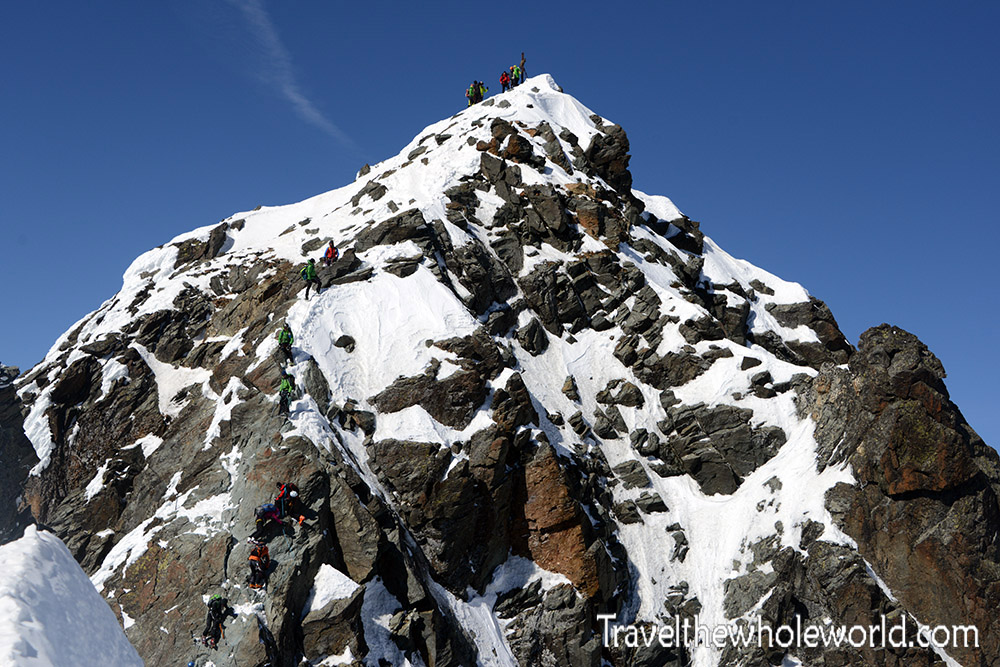 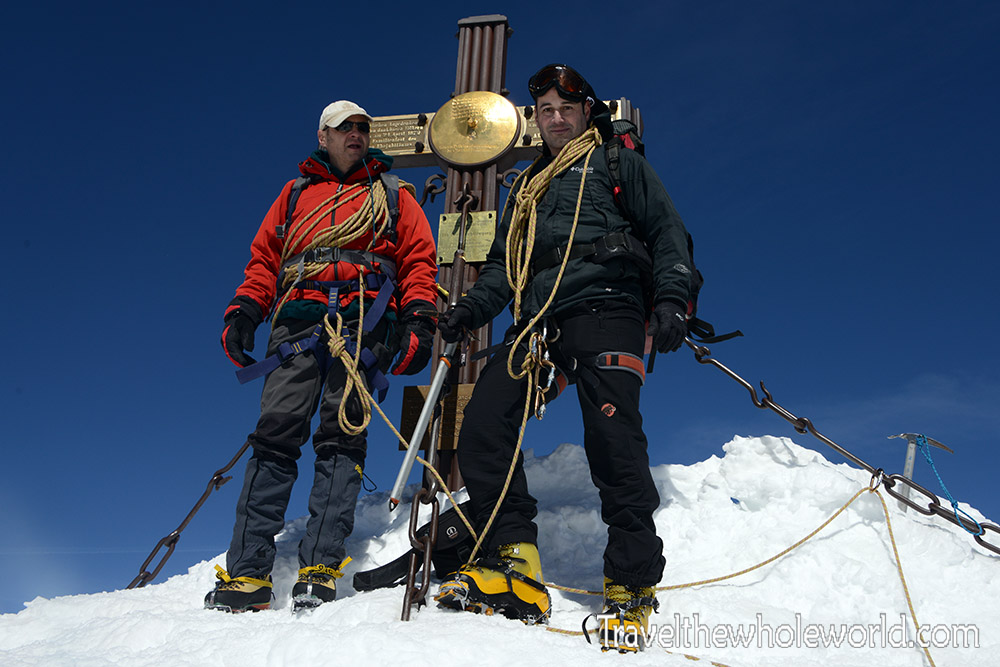 After the rock climb there was a short walk to the summit. Above is myself and my guide on the top of Austria! In German, a cross on a hill or mountaintop is known as a Gipfelkreuz, and the Grossglockner first had one way back in 1802, two years after it was first climbed. 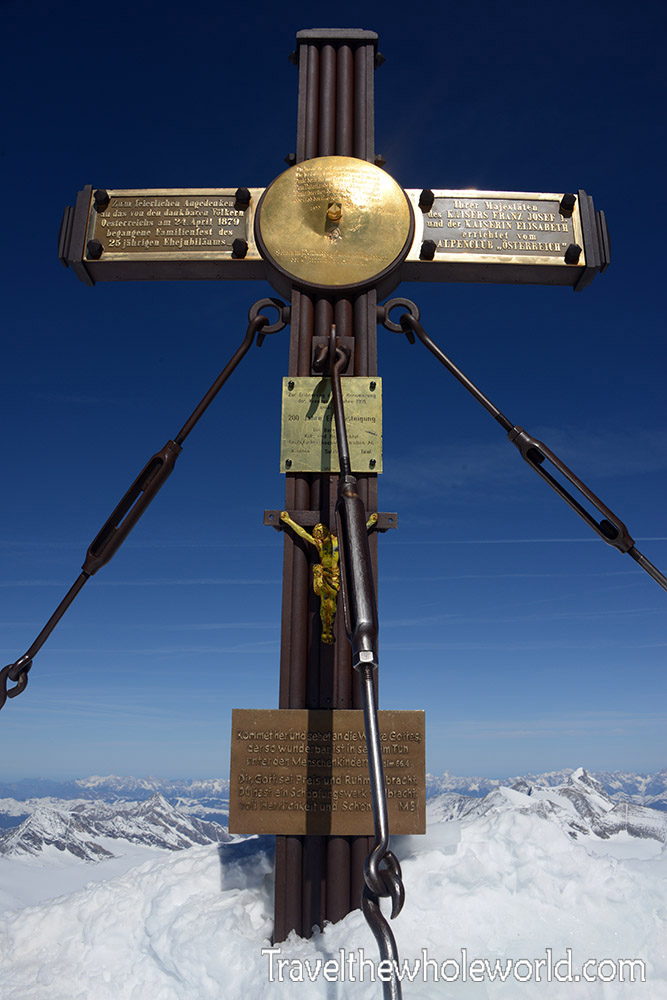 The original Gipfelkreuz, or cross, was wooden and didn’t last long. Nearly 80 years later in 1880, a 600 lb cross that you see photographed above was installed. It’s been standing at the top of Austria for well over a century now. 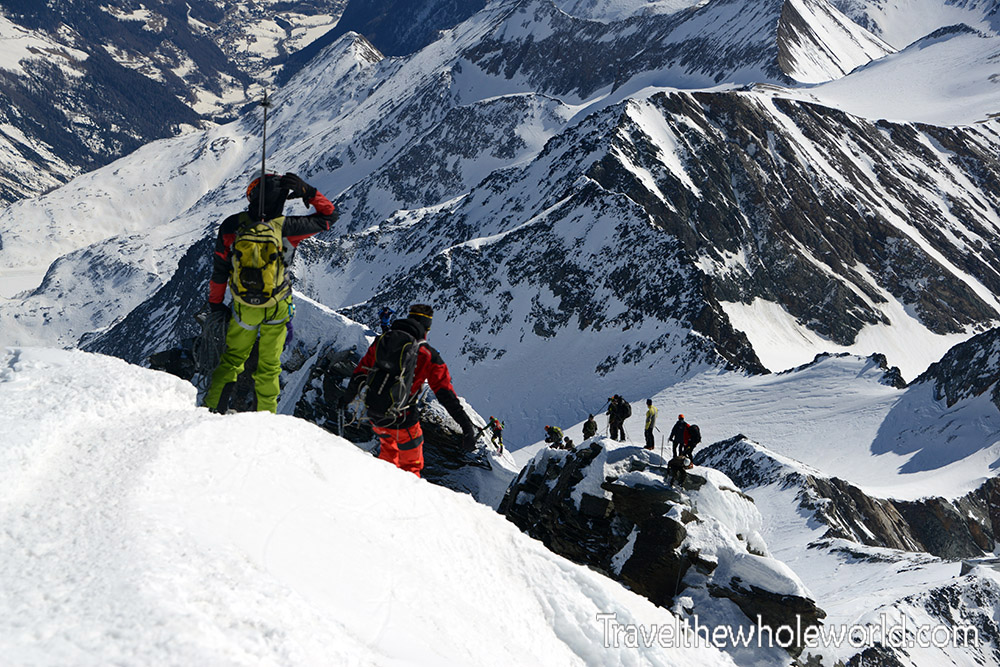 I had suffered greatly getting to the top of this mountain. As I mentioned I had done lots of climbs that were much much harder, but my fitness was so terrible I had to pay a price here. Now that my torture was over it was time to return to the Stuedlhuette hut. Most of the others limbed down from the summit ridge, and once back on solid snow simply skied to the hut. There was a bit of traffic heading down, but I took these last two photos showing the descent. This was definitely a short and sweet climb, but I had some of the most dramatic views and exposures I’ve ever been on at the time. After climbing the Grossglockner I had a new respect for the European Alps, and hope to return again for other peaks! This was also the first peak where I did video, so check out some of the highlights from this climb below. 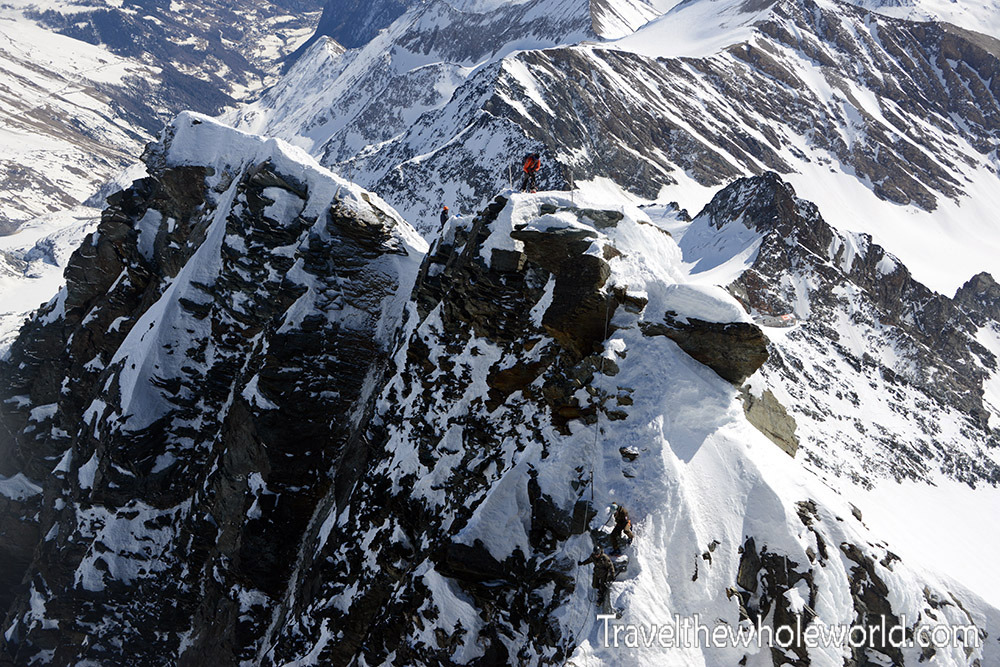