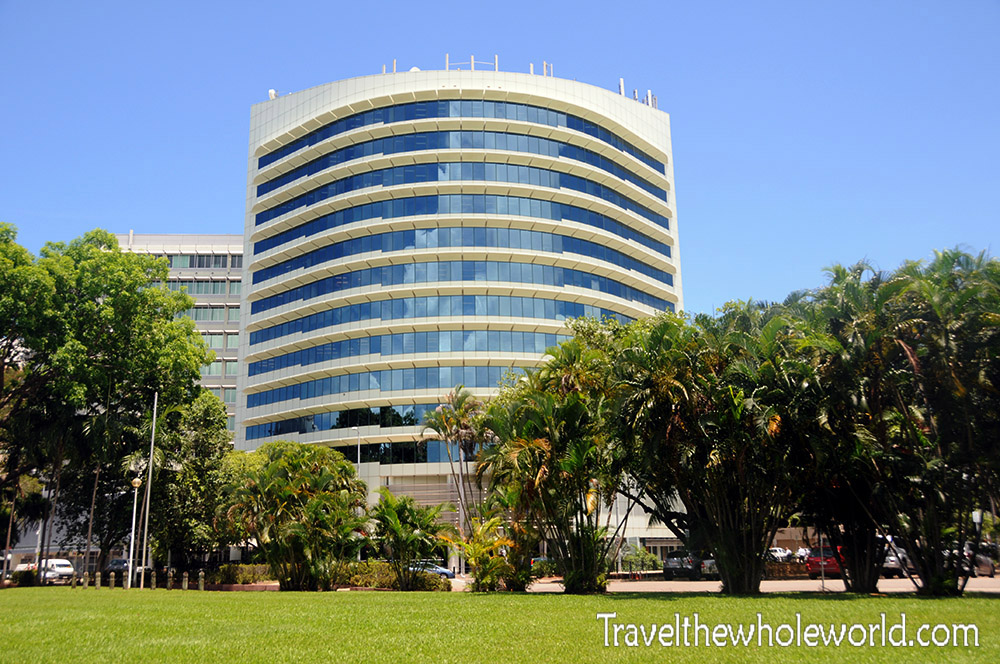 Darwin is the capital of Australia’s Northern Territory, known for being overly expensive, its massive crocodiles, and its close proximity to Southeast Asia. As a matter of fact, the only reason I visited Darwin was because I was already in East Timor, and it was such a short easy flight. Of all the territory capitals in Australia, Darwin is by far the smallest, and doesn’t seem to be a popular destination. Once I arrived I kind of got the vibe from locals that Darwin would have been their least recommended city! Darwin is a colorful place that’s well kept and usually has great weather all year around. There’s a few small issues that stop it from being a tourist destination, but luckily for me I wasn’t bothered by any of these. These first two shots above and below show some random places from the city center. 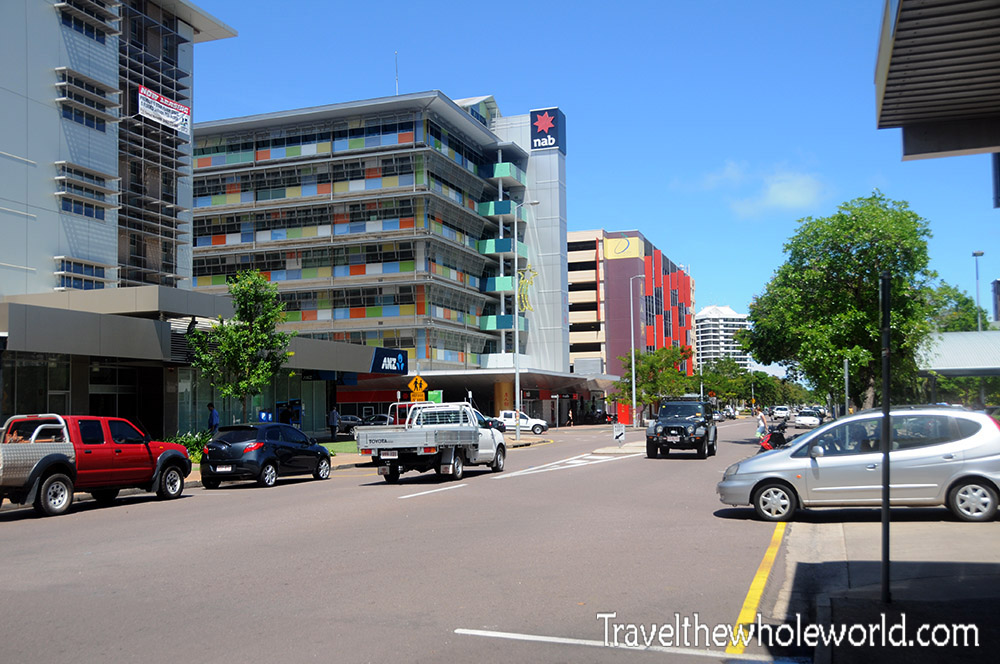 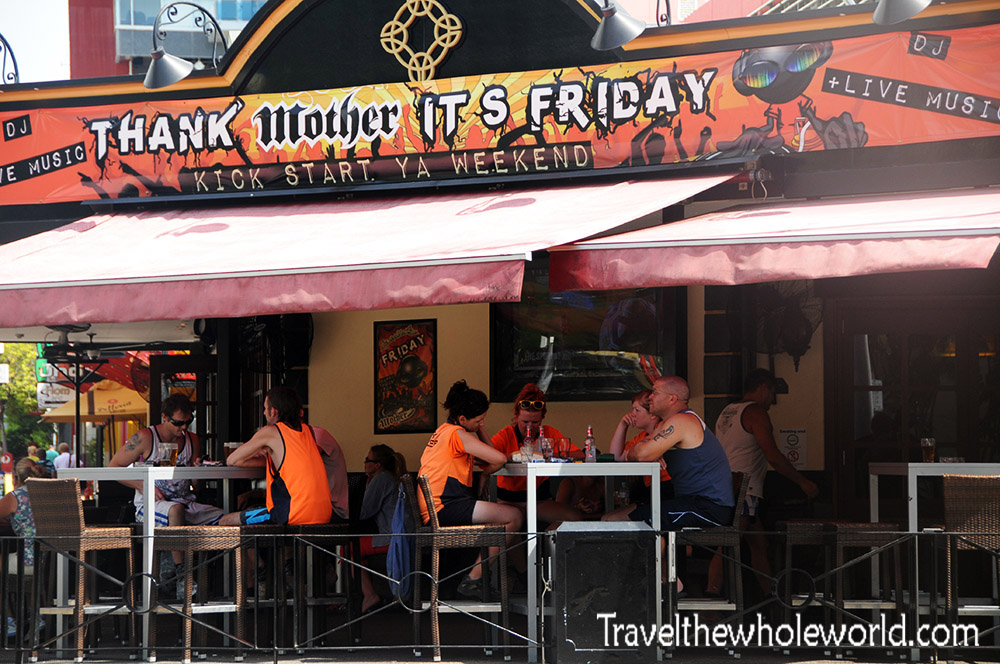 One drawback is that Darwin is such an expensive city. It’s a bit remote, and the only practical way to arrive is by flight. Any domestic road trip would require over 24 hours to reach a reasonable sized city, and that’d cost you more than a flight anyway. Because Darwin is a bit isolated, everything has to be imported and it’s the reason why its become so expensive. Restaurants and hotels are much more costly here than most popular destinations in the country. Darwin still is large enough though that you have lots of options. This restaurant I went to above wasn’t too painful to my wallet! If you’ve come here to go shopping and purchase fine art, then expect to pay thousands of dollars for something like this vase below. 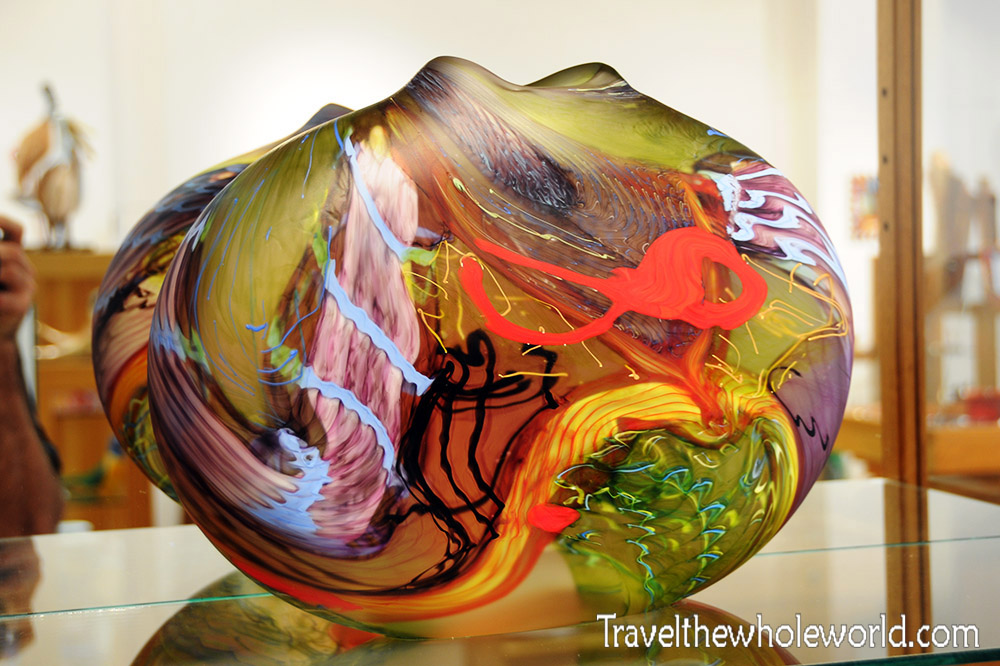 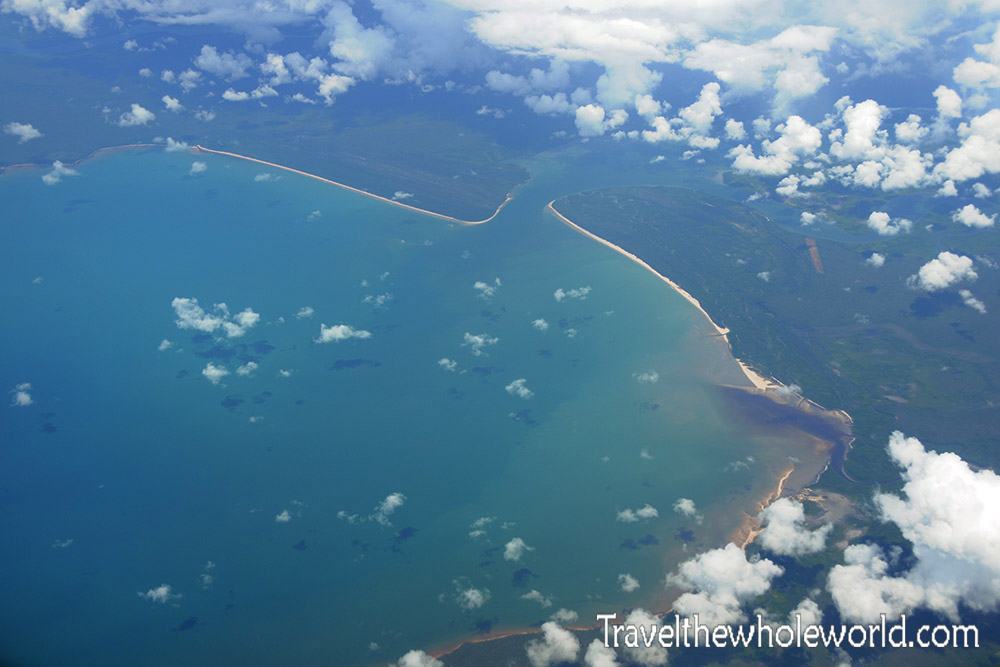 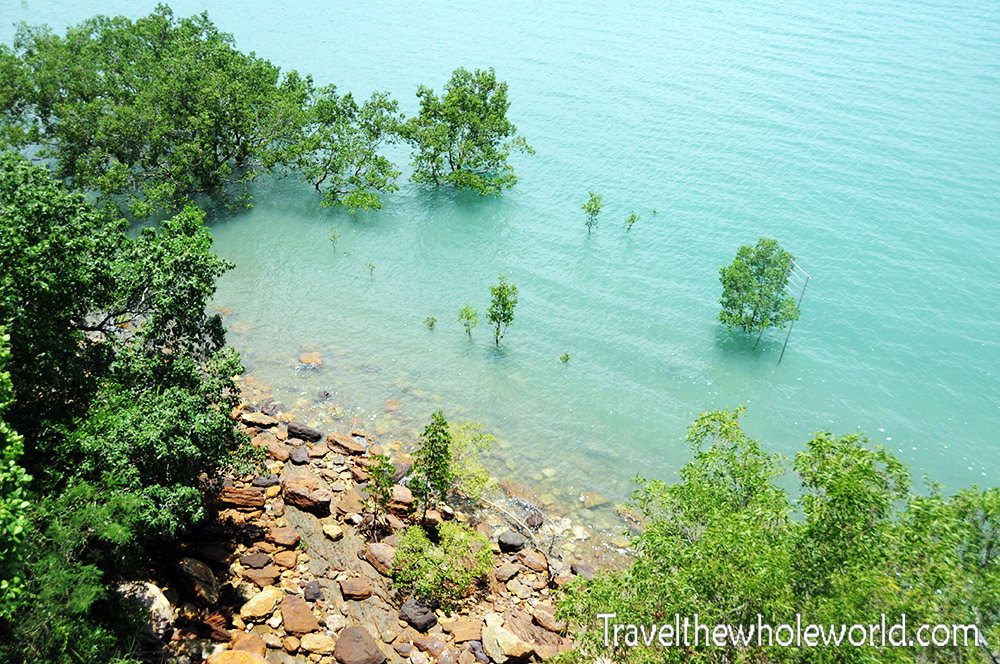 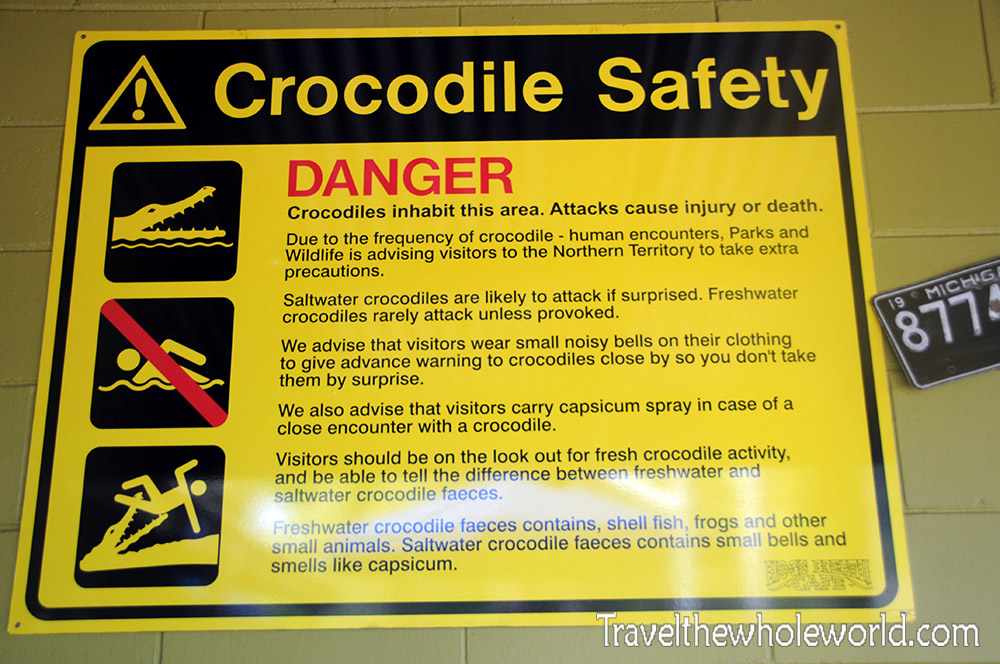 The crocodiles in Darwin are no joke. I’d say that seems to be what this region of Australia is most famous for. Even walking to a beach could be a deadly mistake. This article below was printed while I was in Australia and tells the story of how some Germans were nearly devoured by crocs. In a time where humans have largely over developed the world and destroyed habitats, these crocs could seriously be nature’s last stand. I found it amazing how there is still a place on earth where dangerous animals still keep humans away. There are seriously no safe beaches to visit for hundreds of miles. 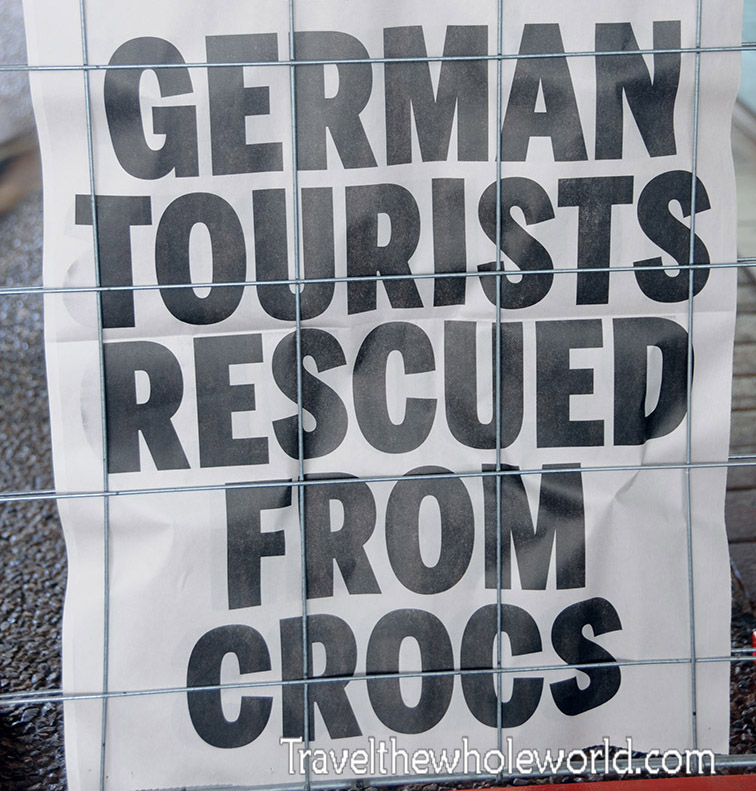 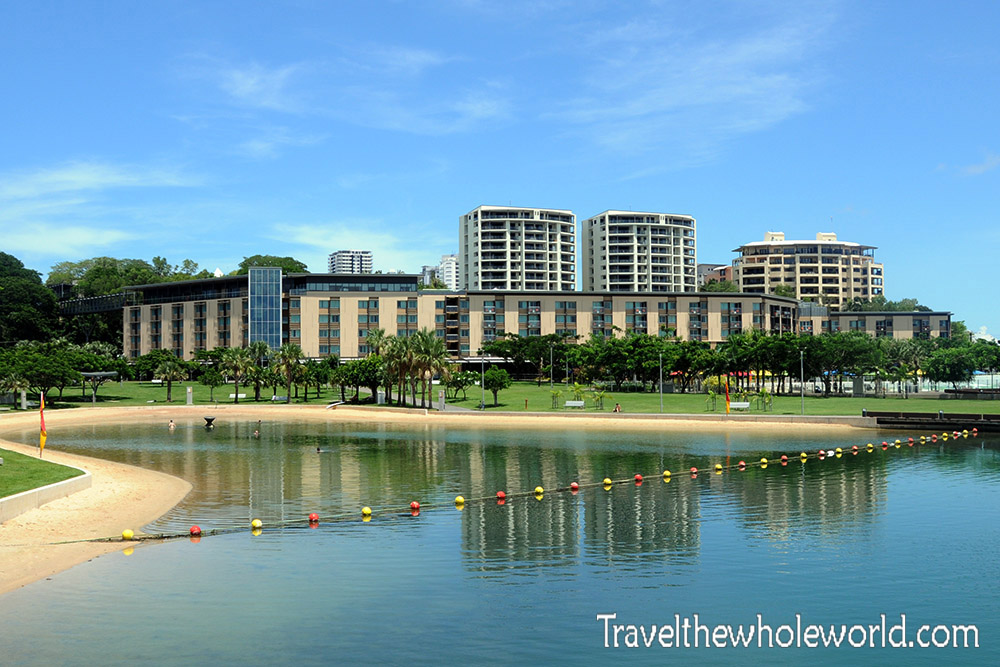 If you booked a flight to Darwin Australia for a beach vacation, then you made a terrible decision. There are a few places to swim, but the best you can do is find a hotel like this one above. A few accommodations place nets out to help block jellyfish and crocodiles. 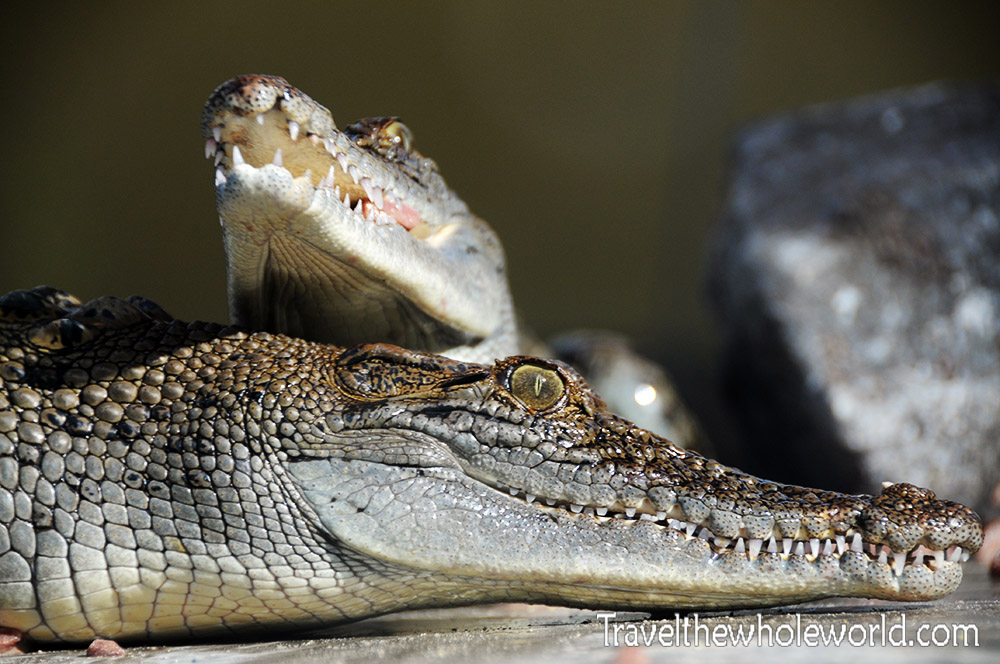 As crocodiles exist all over the coast of the Northern Territory, you won’t have any problem finding them. As a matter of fact, there are plenty of places right in Darwin where you can get some close ups of these massive reptiles. The photo above shows some juveniles that are being fed. 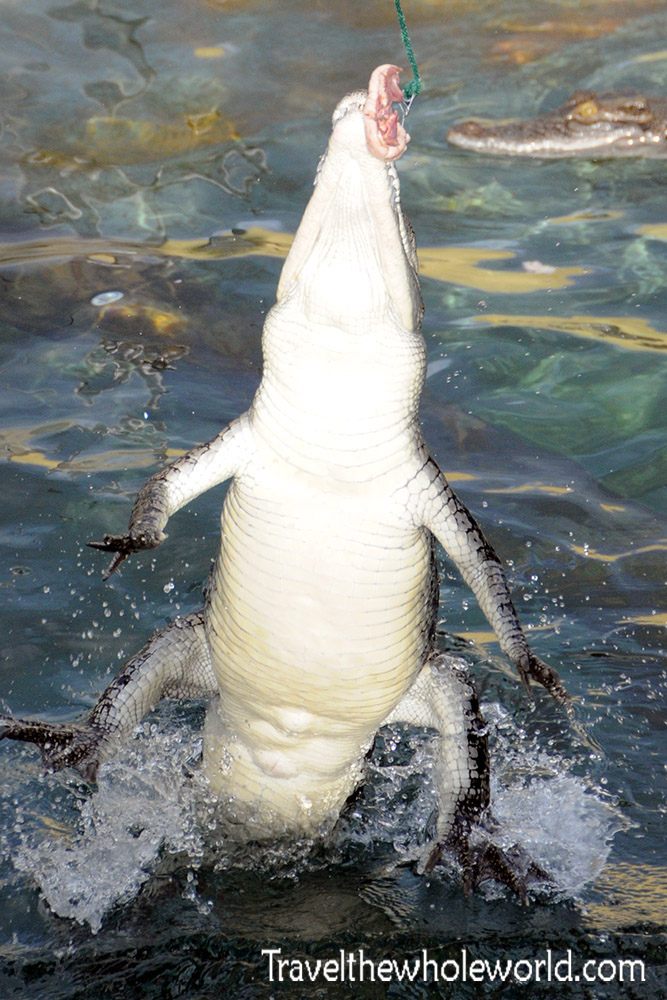 Some of the older crocodiles above and below show off their jumping skills when it’s lunch time. These guys can get some serious air time! I didn’t do any of the river tours, but there are actually wild crocodiles that will follow the boats and also jump incredibly high for a free snack. 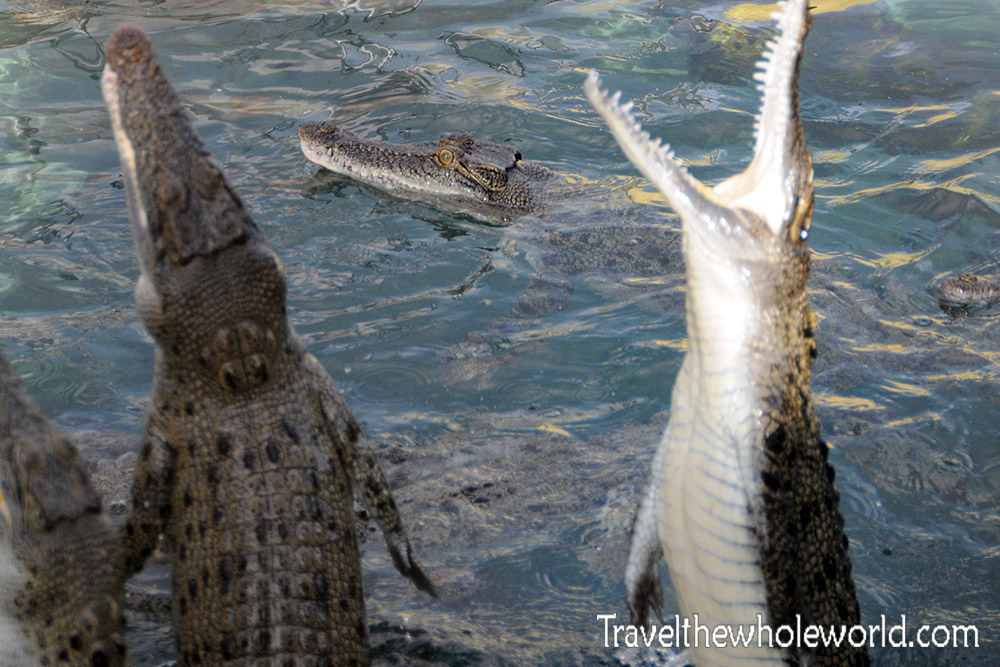 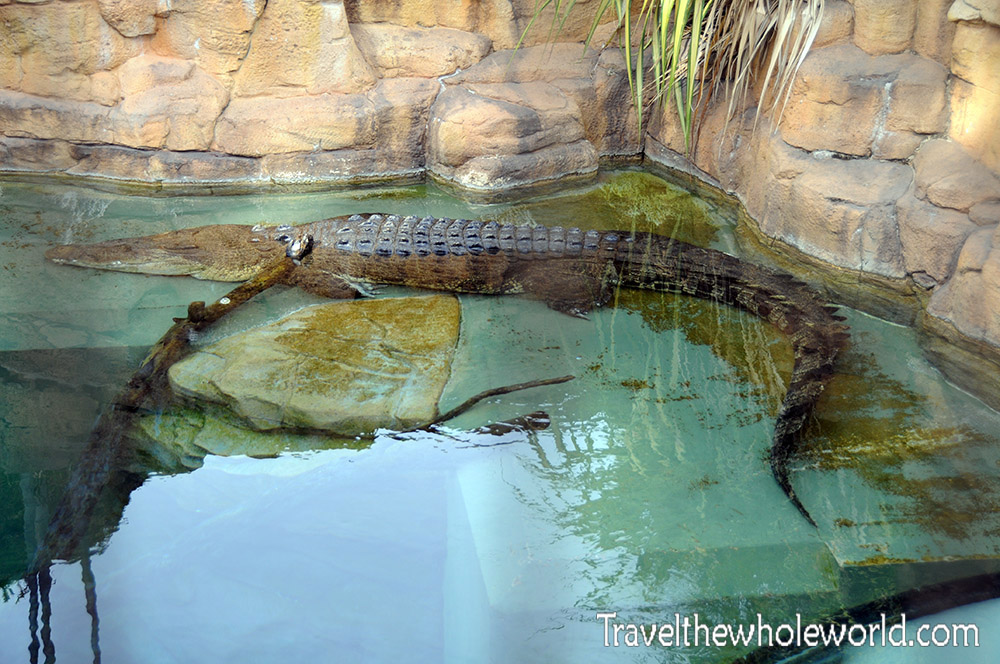 The most famous crocodile in Australia is photographed above. This guy is actually the same croc from the original Crocodile Dundee film. Some crocodiles can live up to 80 years. While his acting career may have come to an end, he still could have a long life ahead of him. All these photos I’ve shared are salt water crocodiles. These are the largest and most violent species in Australia. Their freshwater crocs still of course pose a danger, but usually have to be provoked in order to attack. 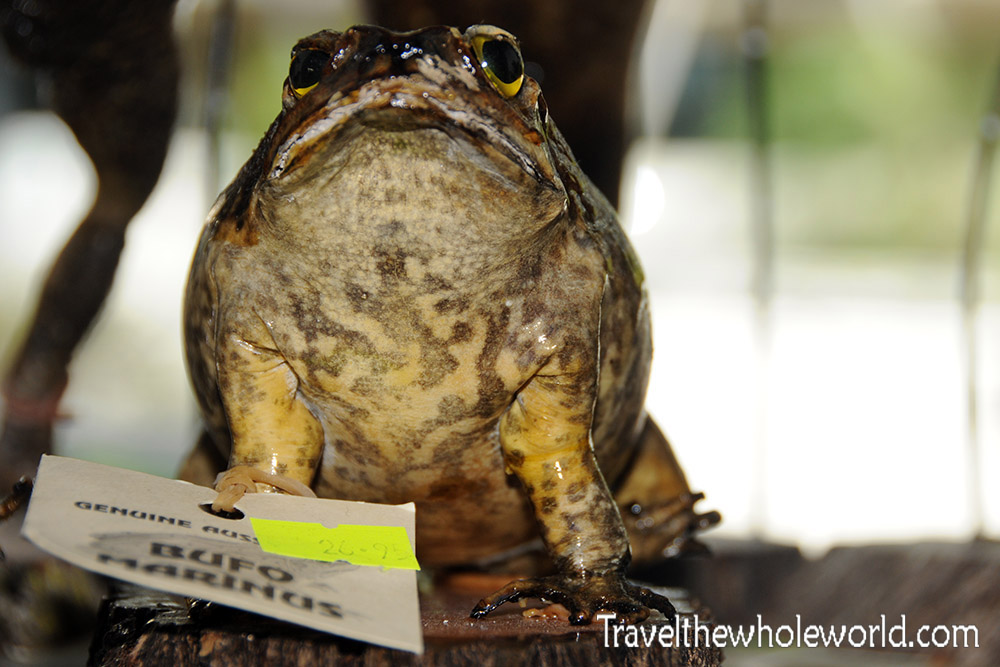 One unlikely enemy of freshwater crocodiles is this cane toad. The cane toad is a famous example of an invasive species wreaking havoc. The toad was brought over from the new world to help control pests that were destroying Australian crops. The cane toad is actually poisonous, and is the largest toad in the world. Over 60,000 of them were brought over to Australia and they immediately adapted to their new environment, spreading over a thousand miles west. Salt water crocodiles are immune to the toad’s poison, but it’s deadly to freshwater crocodiles and has drastically reduced their numbers as well as other native animals. 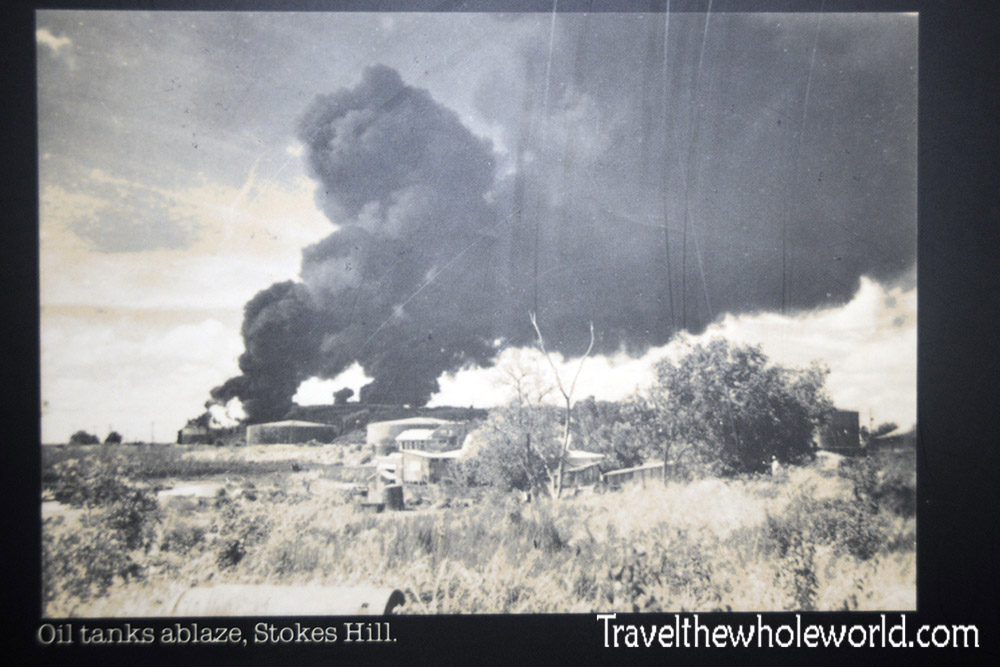 If you’re wondering what else there is to do in Darwin aside from playing with crocodiles, you may be surprised to know that Darwin has Australia’s best World War II history. Darwin wasn’t even a 150 years old when I visited, but it was one of the few Australian places to have been attacked in World War II. On the 19th of February 1942, Australia experienced their own Pearl Harbor, when nearly 250 Japanese aircraft bombed the city. It remains by far the largest attack ever on Australia, and resulted in hundreds of Australian deaths in addition to major losses of infrastructure and military aircraft. The Japanese Empire was conquering Southeast Asia, and Darwin’s close proximity meant the allies could easily counterattack. Japan’s attack on Darwin hoped to destroy their infrastructure and remove the allies ability to use Darwin as a major base in the war. In the photo above, oil bunkers burn after being bombed. 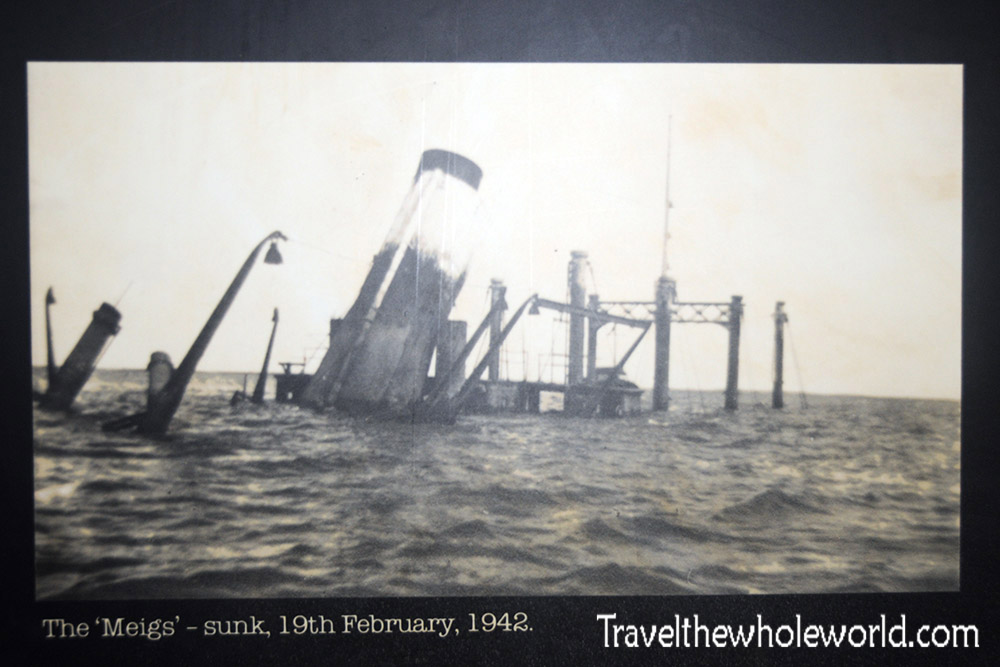 The photo above shows the USAT Meigs that was docked in the harbor. This massive ship was actually later repaired despite mostly sinking. Most of its cargo was lost and is still scattered across the bay and is a dive site. 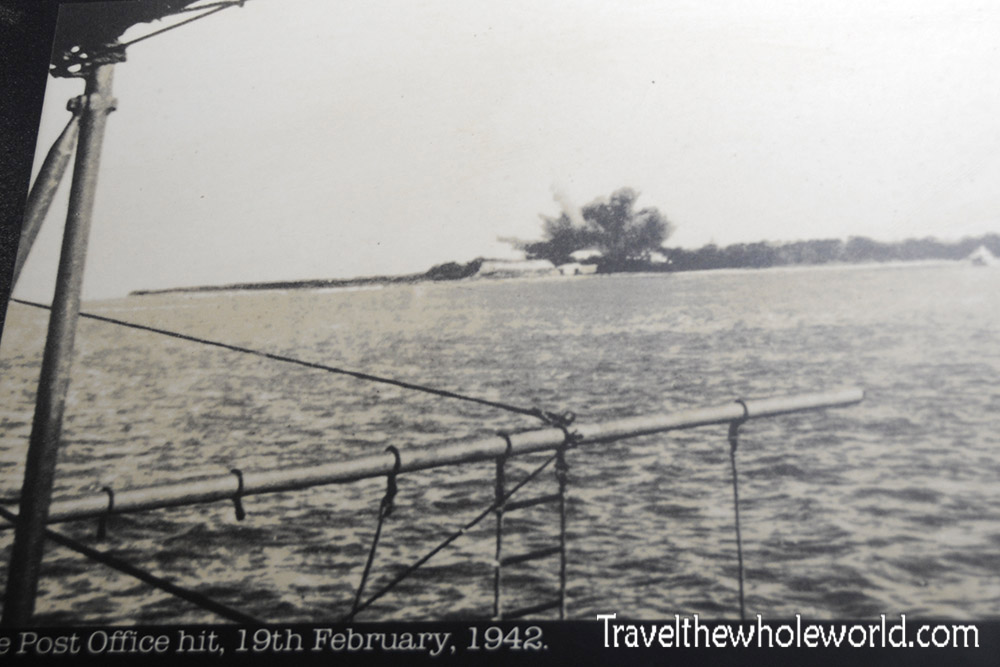 Darwin’s population at the time was only around 5,000 people, but as a direct result of the attacks, half of Darwin’s citizens permanently moved away. Civilian infrastructure was attacked as well; photo shows Darwin’s post office being bombed. 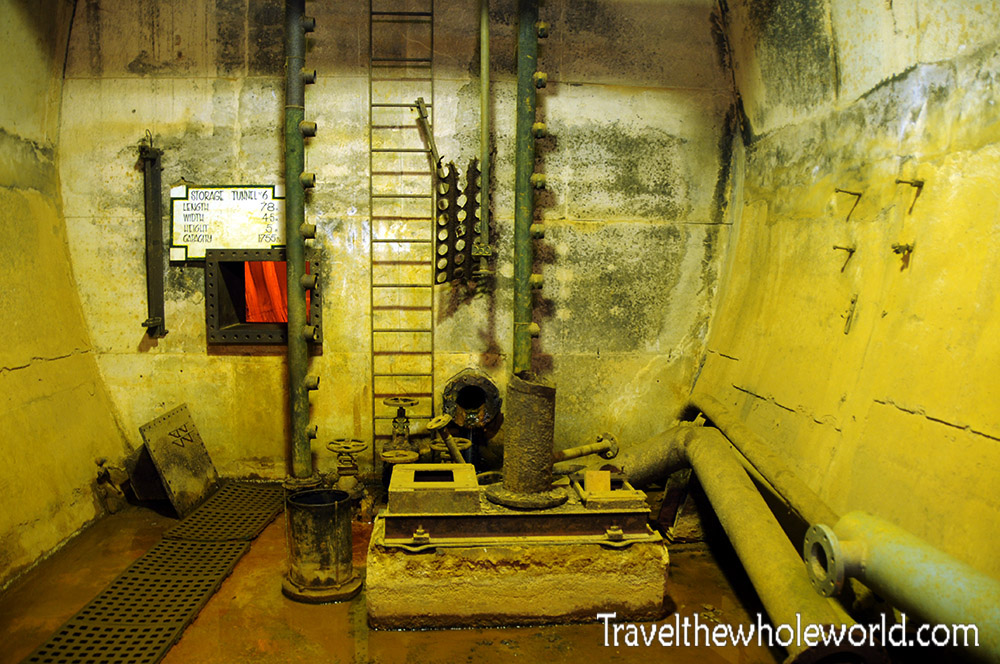 The Japanese attack on the 19th of February was just the first. Although it was by far the largest, there were around a hundred other bombing attacks on Darwin during the next year. The fuel bunkers were always a prime target, and since these were above ground they were difficult to defend. Australia decided to create fuel tunnels and bunkers underground to protect them from Japanese aircraft. By the time this tunnels were finished, the war was over. Two of these tunnels are open for exploration however! The photo above and below shows the remains of the oil tunnels built deep underground. Despite all this work, they were never used. 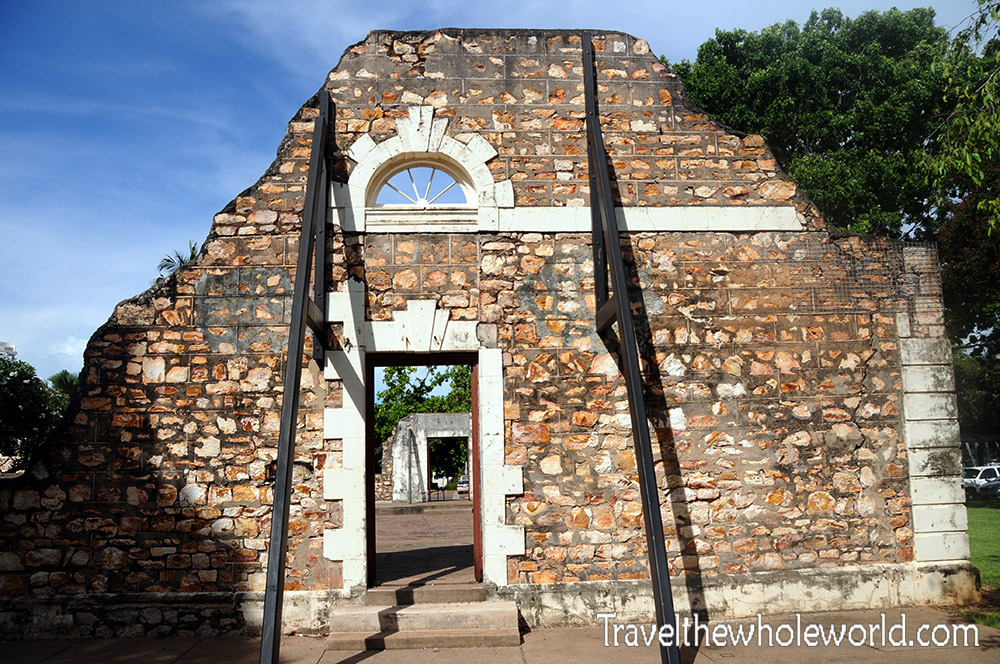 The Japanese World War II attack will always be the most infamous destruction brought to Darwin, but even if that never happened, Darwin hasn’t had much luck in its past. Darwin has been essentially destroyed four times in its short life, the other three were always by cyclones. On Christmas Eve of 1974, the latest cyclone destroyed up to 70% of all structures, including this late 19th century town hall. Cyclone Tracy’s winds reached less than 60 miles (100 kilometers) out in diameter, and held the world record for being the most compact cyclone for decades. Despite its small size, it caused nearly five billion dollars in damage, and remains the most destructive cyclone in Australia’s history. 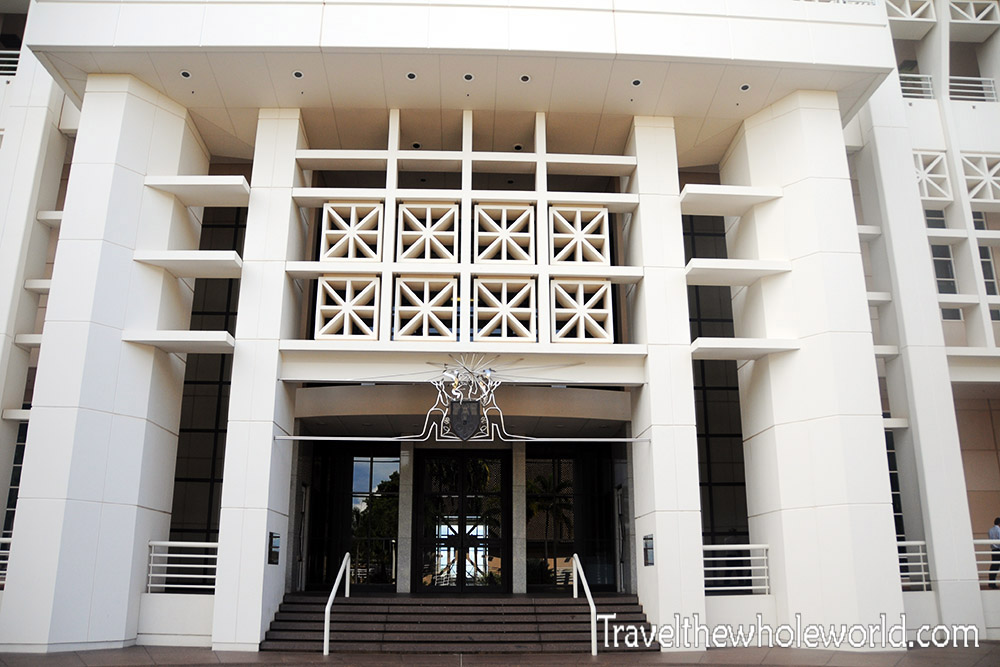 Ever since Cyclone Tracy, modern buildings have been built up to codes designed to withstand future storms. Darwin’s parliament building photographed above should be able to survive any future cyclones. 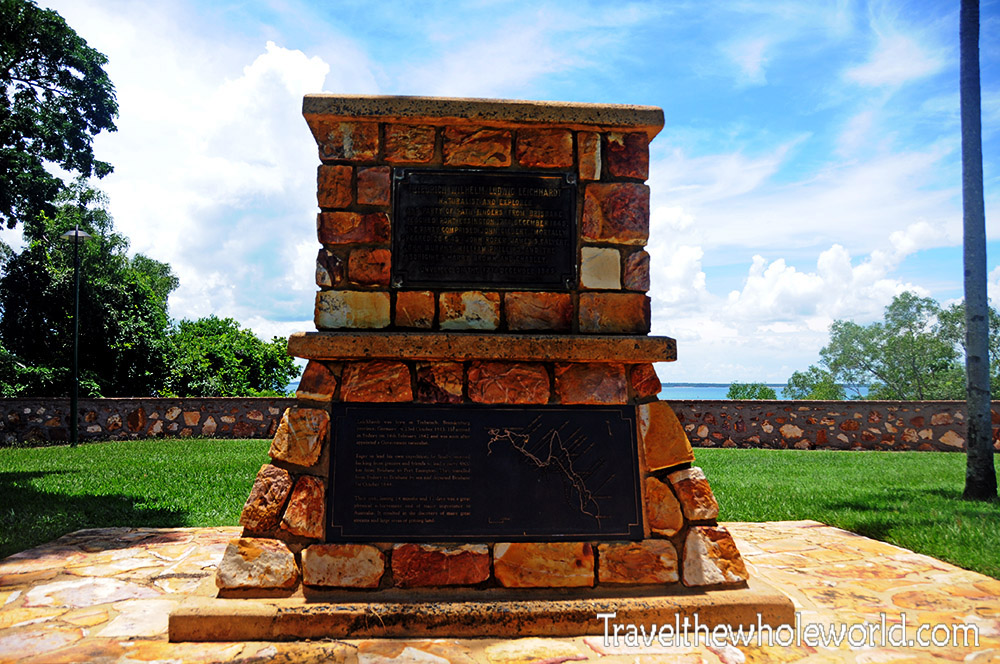 Like always, I just found exploring the city enjoyable. While I was here the weather was absolutely perfect, the city was really well maintained, and of course Darwin is absolutely safe. During one of my strolls through the city, I came across Bicentennial Park, with this memorial for Ludwig Leichhardt. Leichhardt was one of the most famous explorers of Australia, and spent years doing overland trips into the Australia’s unexplored interior. He was made famous in his 1844 expedition, by trekking from the east coast all the way through the Northern Territory, and was presumed dead until he returned to Sydney. On his last quest he went even further west, and was never heard from again. 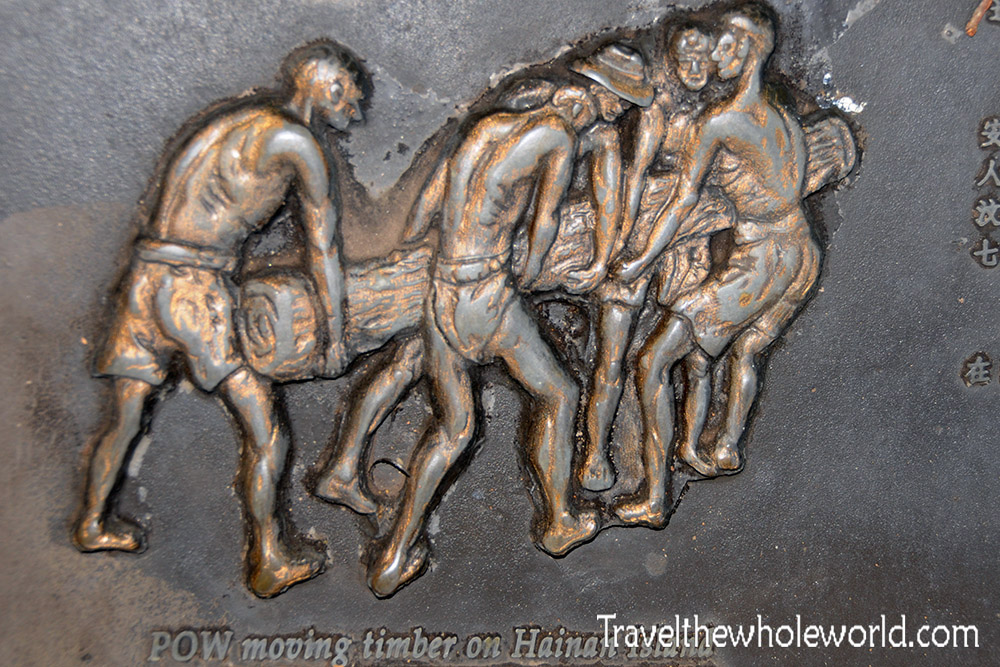 These two photos above and below were also from Bicentennial Park. These memorials were created to honor Australian prisoners of war who were taken by the Japanese. The memorial below mentions that up to 70% of the prisoners were killed from starving, poor treatment or directly from execution. 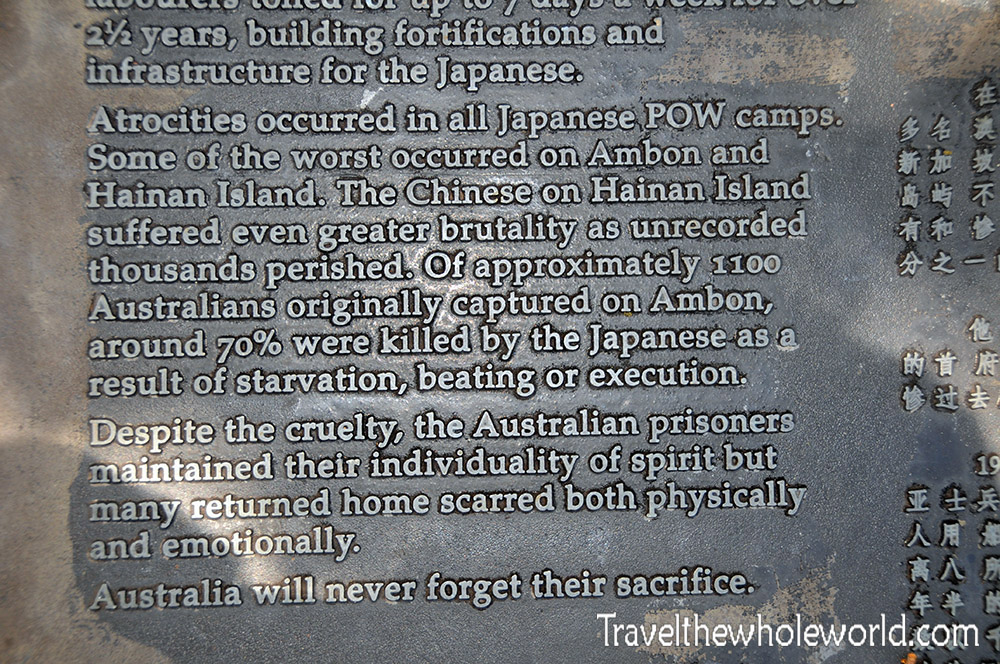 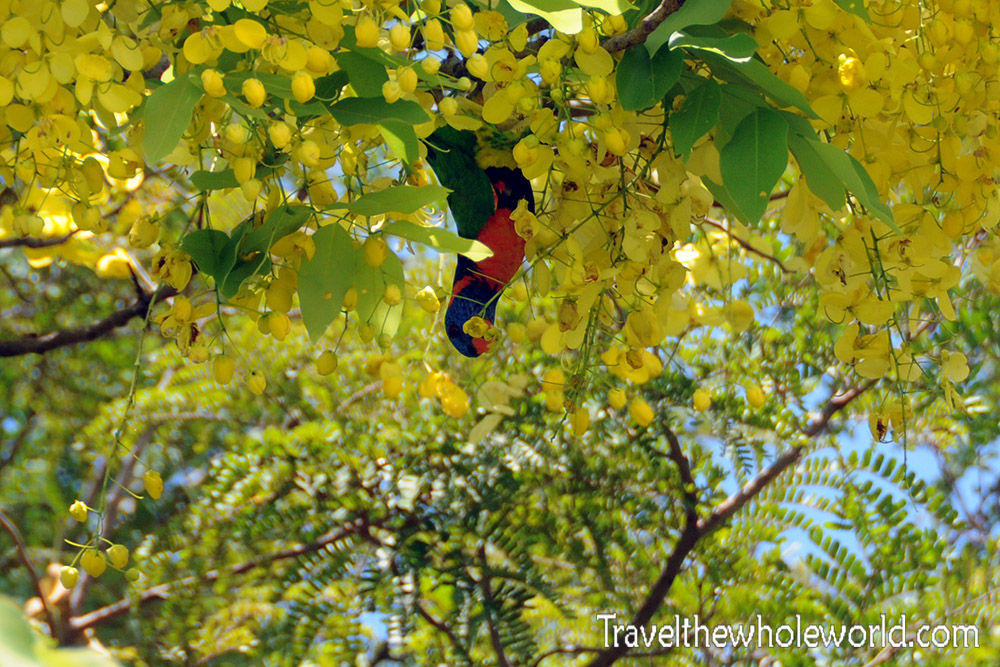 I wish I had some photographs of the Pioneer Park itself. Some of the memorials were definitely not lighthearted, but the park itself was by the water, with lots of green trees and the occasional park bench. I enjoyed having a rest here, and found it was an unexpected place for bird watching. I caught this rainbow lorikeet parrot in one of the trees and this masked lapwing below! 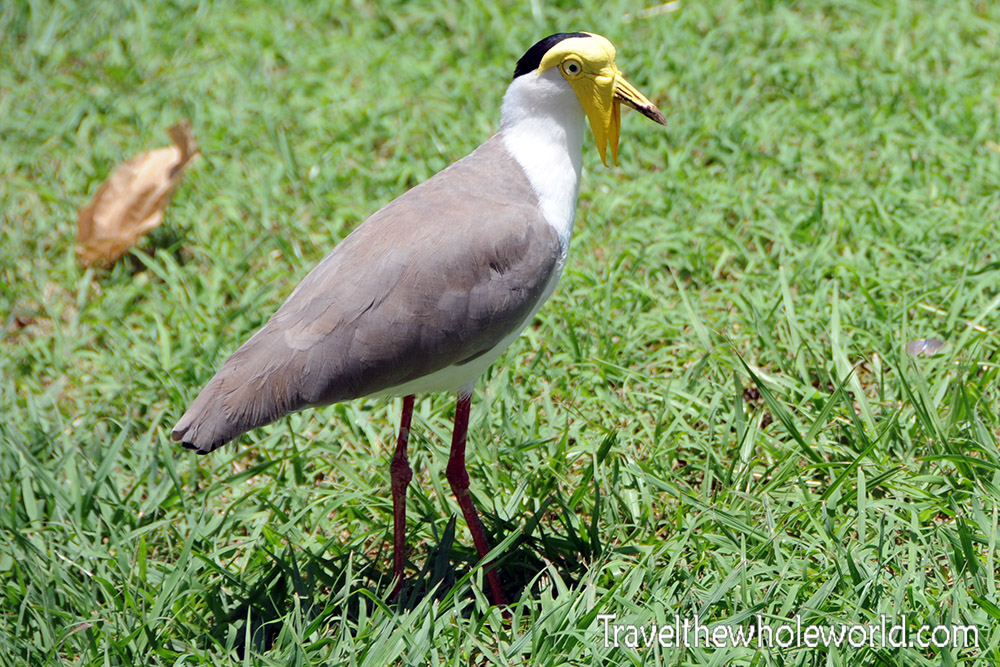 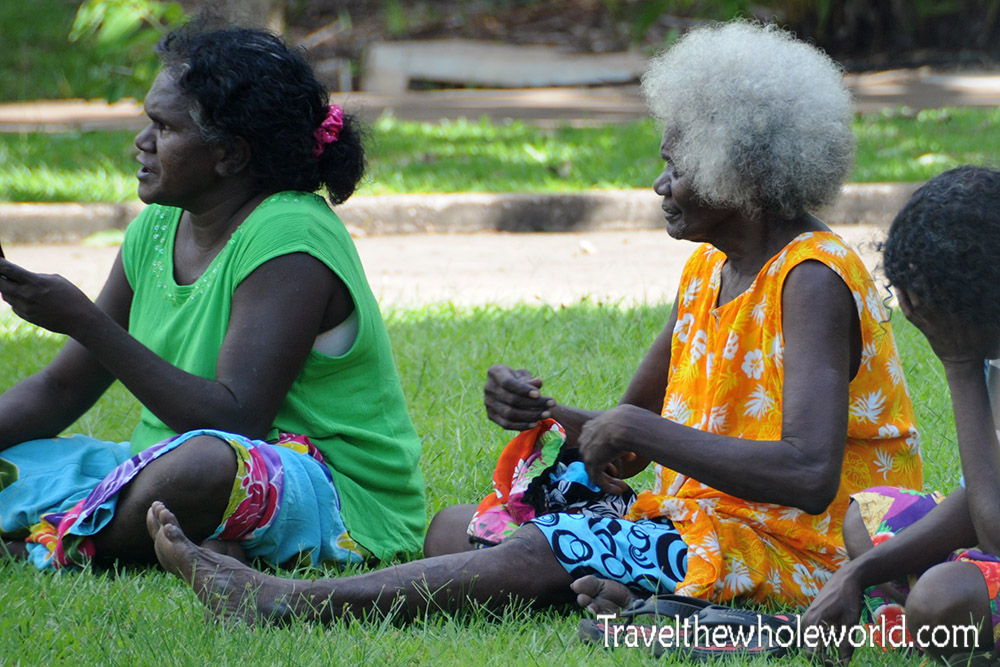 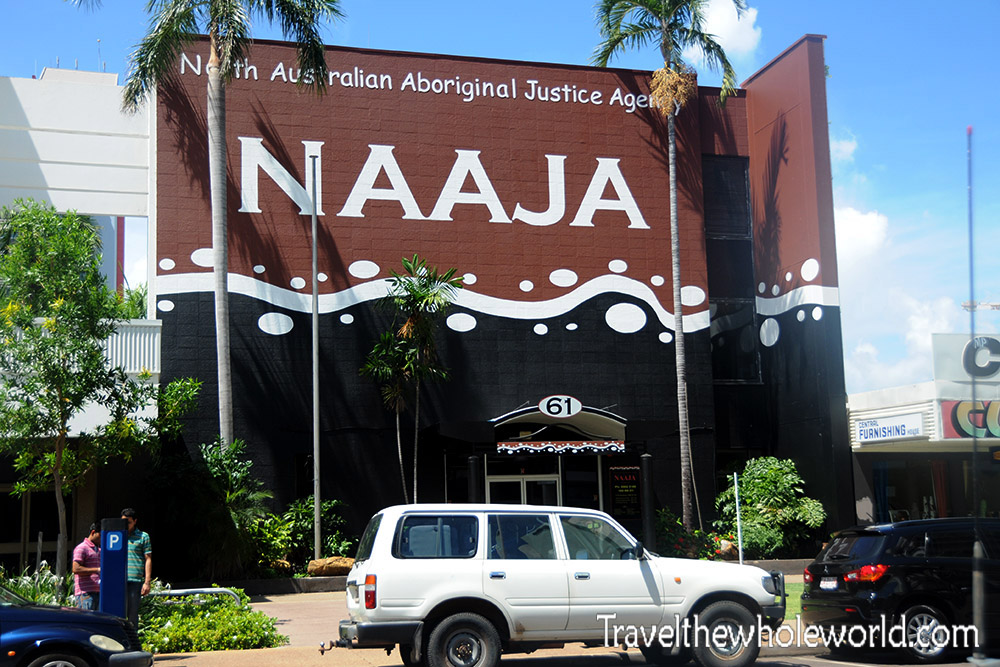 Like natives in the new world, I saw some aborgines who have fallen into alcoholism. For those that need it, the NAAJA, or North Australian Aboriginal Justice Agency photographed above “delivers high quality and culturally appropriate Aboriginal Legal Services to the Top End”. I’ve never been to aborigine territory yet, but I’d really love to visit and see their lifestyles in the Outback. 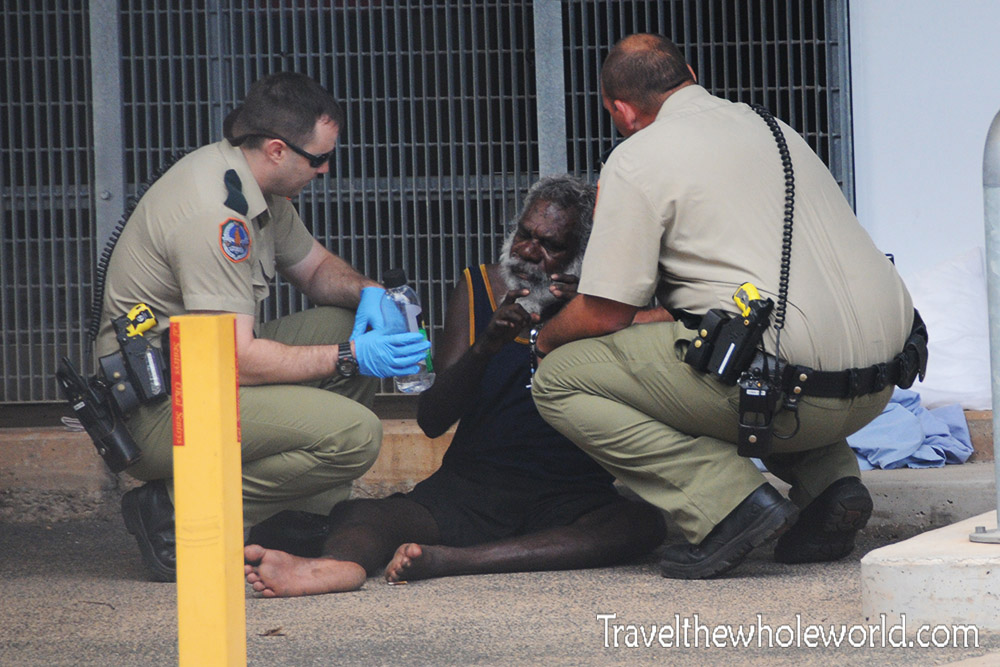 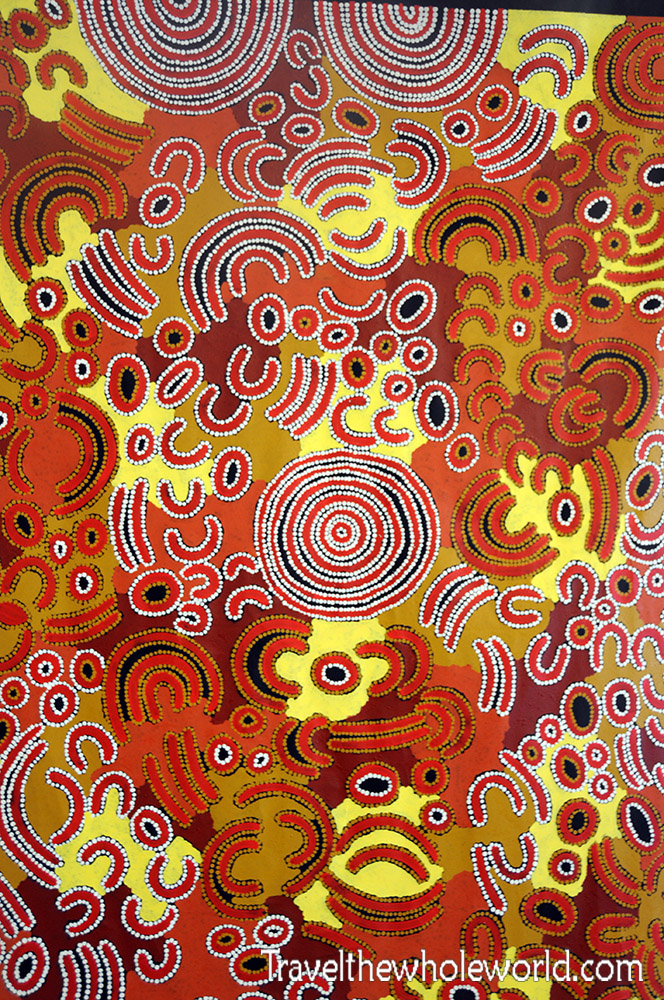 In a more positive note, in Darwin I came across Aborigine art for sale. In hindsight, I wish I had taken more photographs to share, or even better purchased some to keep. The painting above is done with typical native style. Australian Aborigines never had their own written language, so some of their artwork preserved their stories and history. This is such a strict tradition, that aborigines were not allowed to paint others families history without permission!