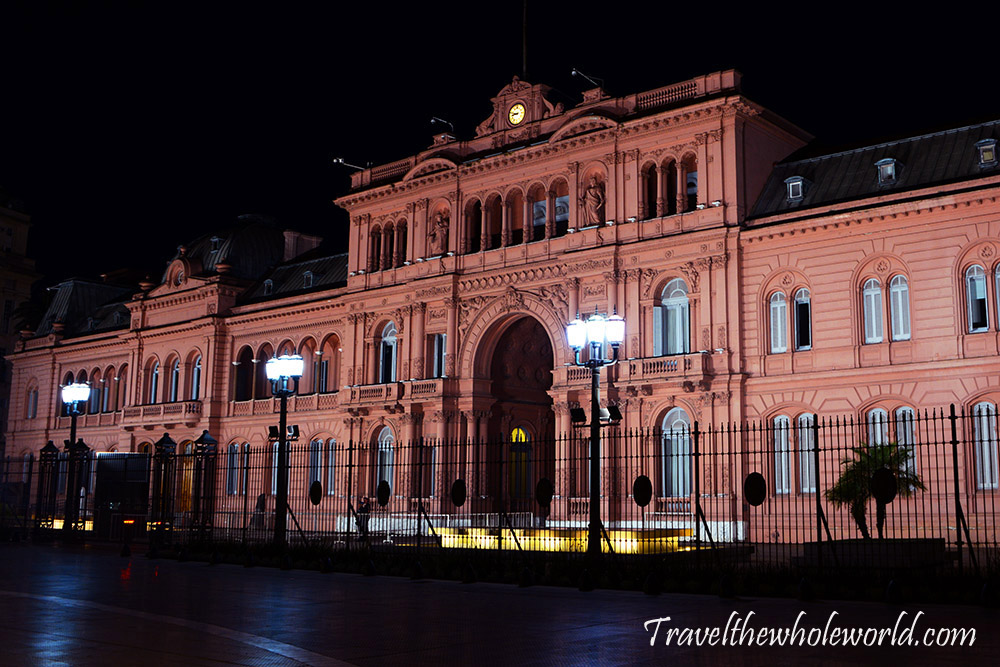 Buenos Aires! One of South America’s most loved cities, and one that I’ve been to twice nearly 15 years part. Though I’m sure things have drastically changed for the locals, for me it was as an amazing city as it’s always been. Both times I visited the Casa Rosada building, so it seemed right that I started my page here. The is the house of the Argentinean president, which has seen three leaders come and go since I first visited in 2005. On my first trip I learned and never forgot the symbolic meaning of the color pink. It was created by mixing the two main political parties red and white colors together. 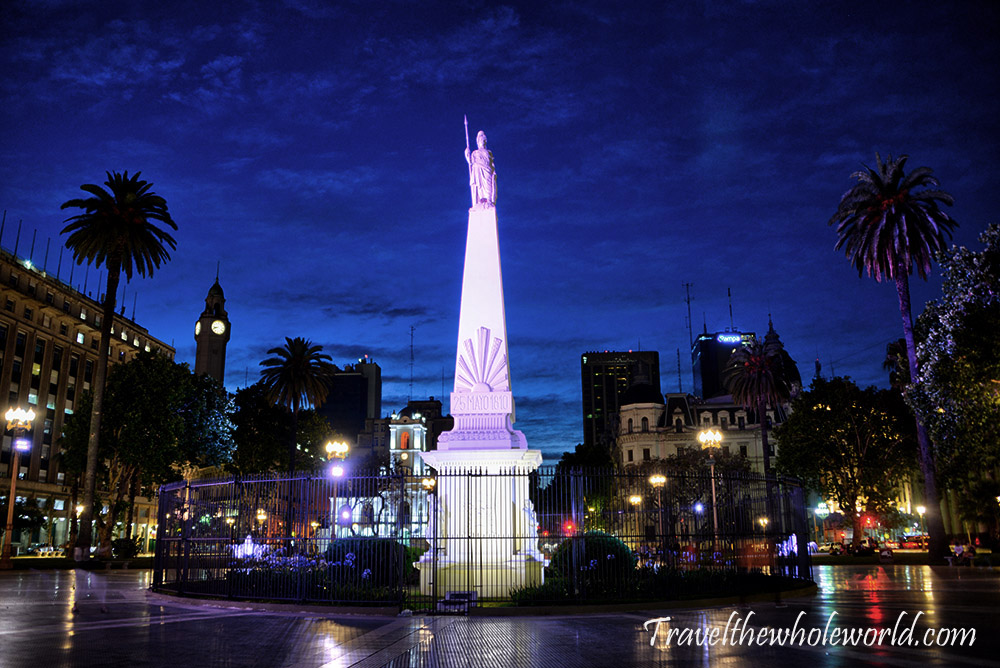 The heart of Buenos Aires is Mayo Plaza, named after the May Revolution that gained the country their independence. Created in 1884, the plaza continues to be an important location of festivals, protests, and the ceremonial grounds of national events in Argentina. I’ve visited the plaza multiple times, with a photo taken during the sunset photographed above. Many famous buildings surround Mayo Plaza such as Casa Rosada. The photo below shows a church a block away. 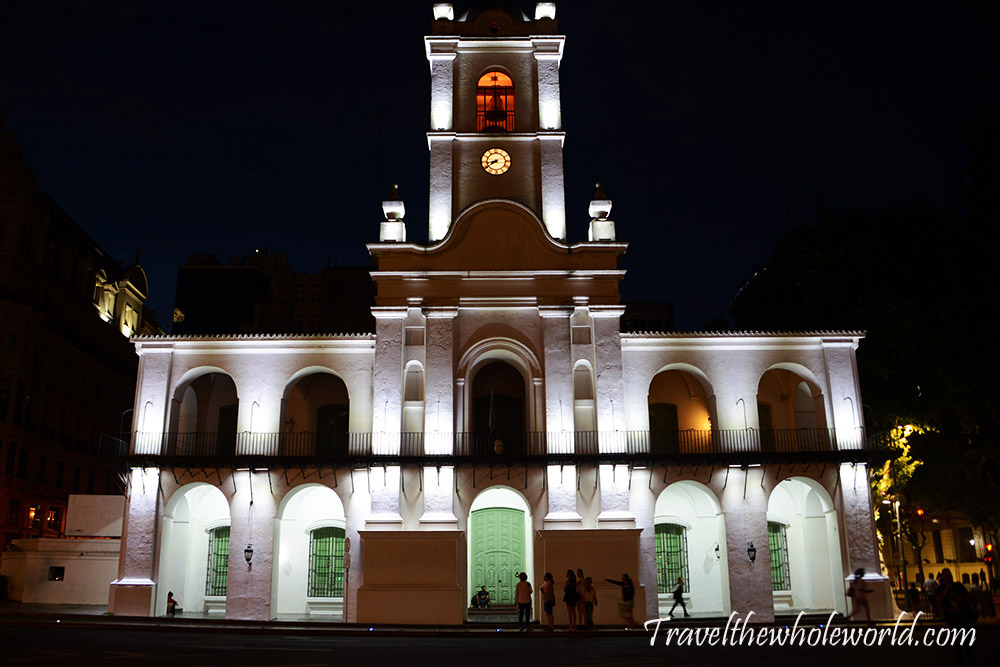 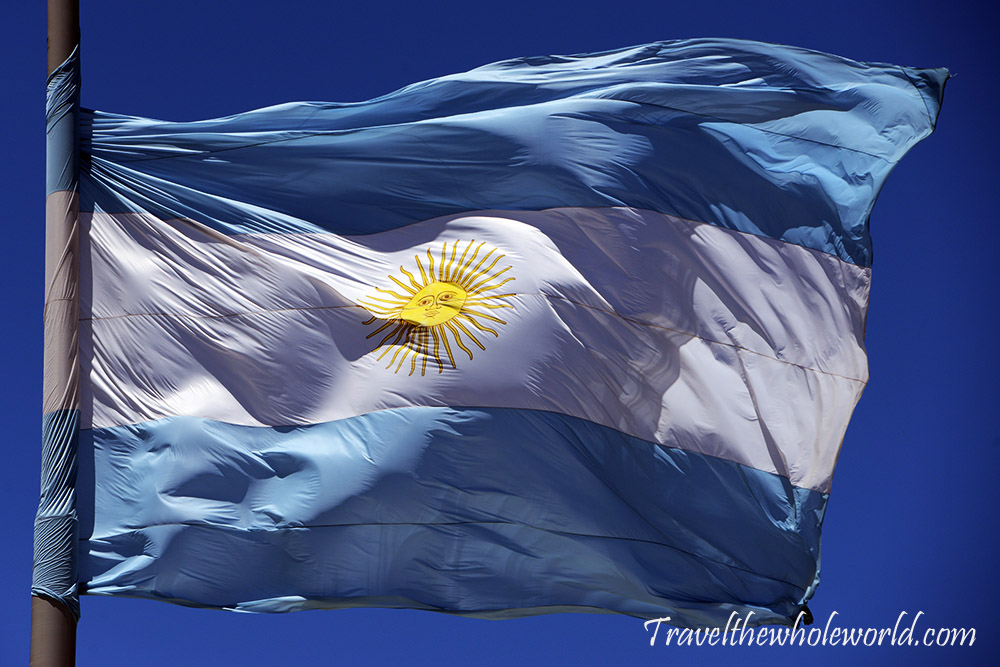 Mayo Plaza is a good reference point when wandering the city, so I visited several times during the day as well. Another reason why Buenos Aires is loved is because of their weather. I took this photo of their flag in Mayo plaza when the sky was bright blue and the temperatures were near perfect. The palm tree below was also in the plaza, and the way the white clouds crossed through the sky also resembled the flag. 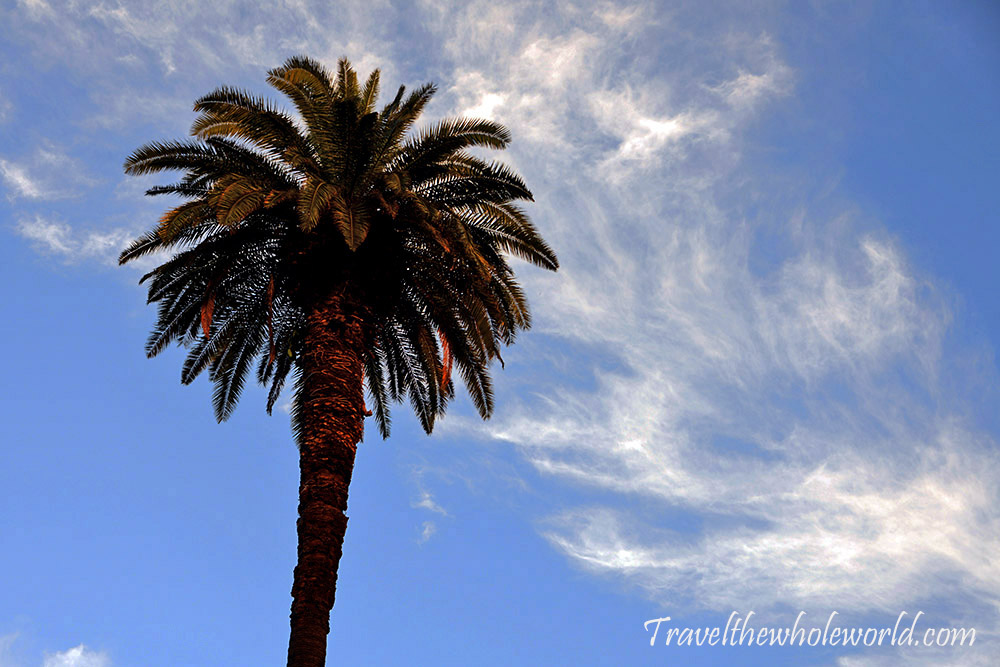 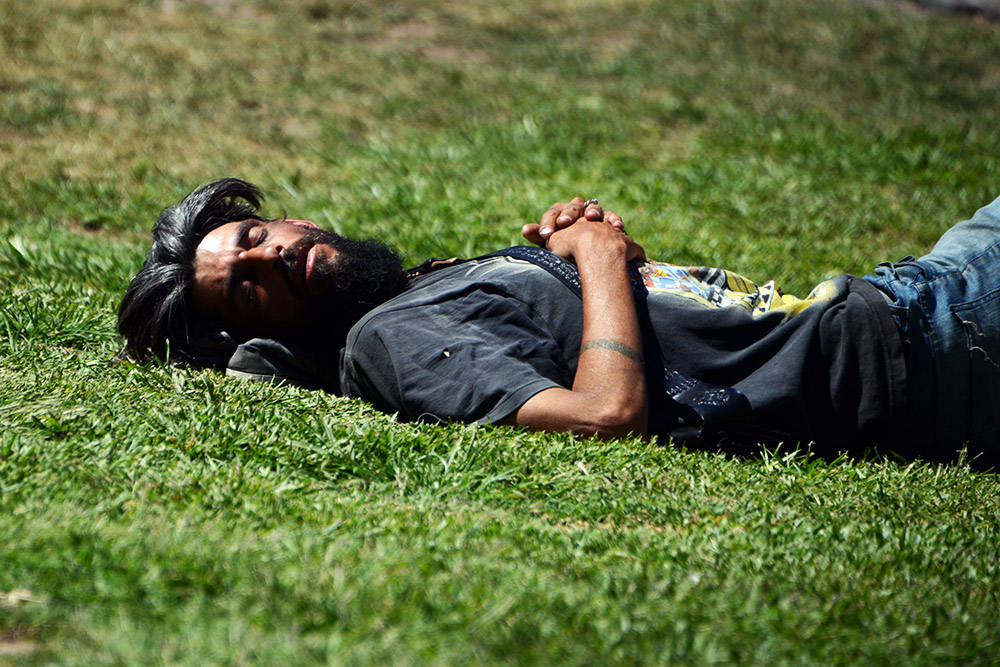 The perfect weather is fitting for a city named Good Air. You can expect to find spring like temperatures year around, and just take a nap outside like this bloke. The warmest averages are just below 80F (26C) in January, and the coldest month of June has average highs around 59F (15C). Of course those are averages, and there are plenty of exceptions of hot and cold spells. One of my taxi drivers even told me that once a decade ago the city got snow! 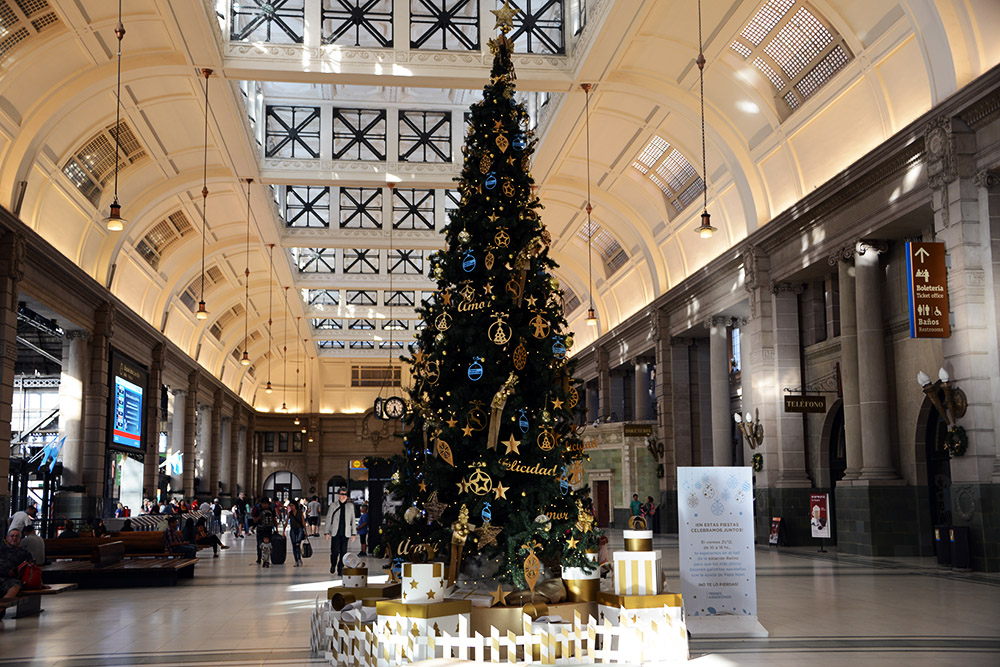 All three times I visited Argentina it was my winter and their summer. During my most recent trip I was just a week away from Christmas, so among the palm trees and warm weather were Christmas decorations throughout the city. In one of the malls I visited, which is also part of a train station, I found this large Christmas tree. The two girls below didn’t look nearly as excited to pose as other people did. 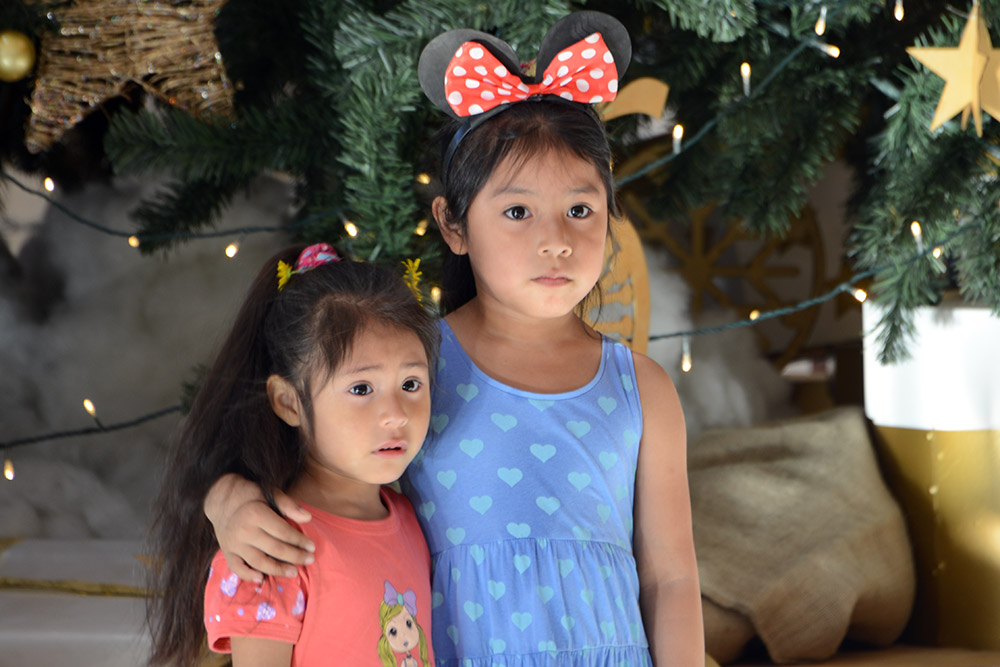 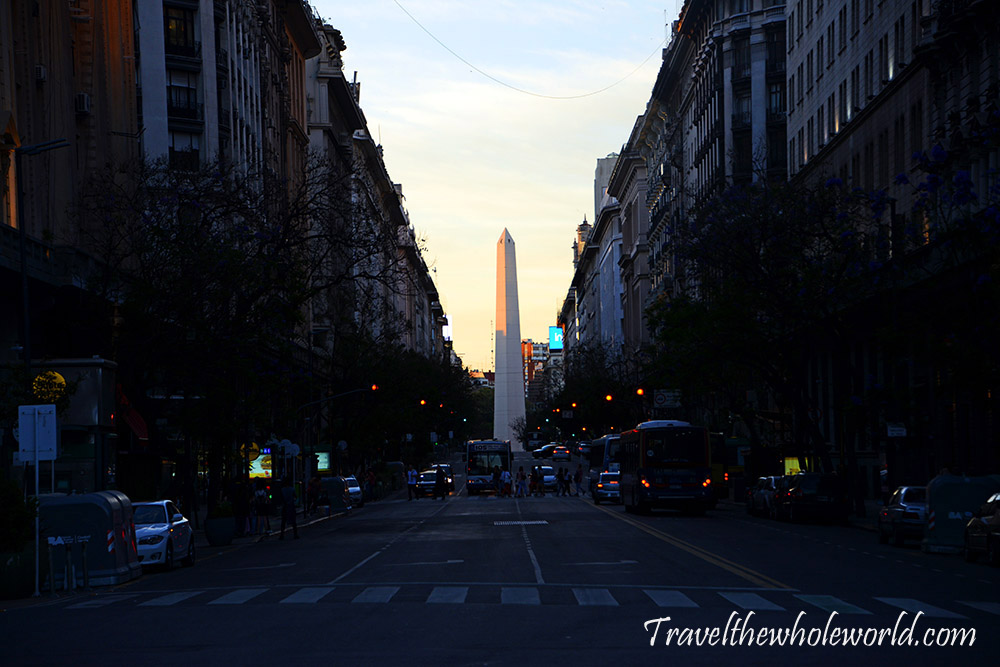 I think with 15 years apart you’d have to live in a country to recognize most changes. From my own personal perspective things felt the same in Argentina. I’m sure I forgot many details from my first visit, and I’m even more sure locals would argue about how much is different now. Of course one thing that hasn’t changed is the city’s obelisk. I always thought it was strange how it looks exactly the same as one in Washington DC, just on a smaller scale. 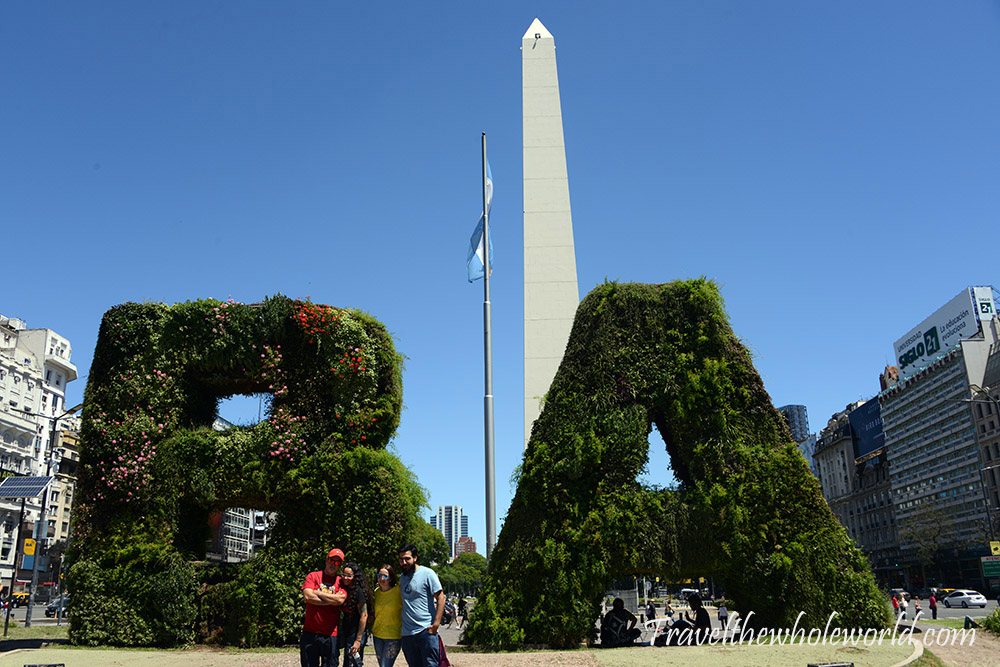 The Obelisco de Buenos Aires as it’s called locally, was built in 1936 to mark 400 years since the founding of the city. It’s hard to believe but the 500th anniversary isn’t too far away, so I wonder if they’ll try to one up this monument elsewhere in the city. The obelisk is definitely a popular place to visit, and if you try to take a photograph of it you’ll always have someone standing in front of you. That is of course unless you come at 6 in the morning. But instead of avoiding people I finally gave in and figured to capture the fun. 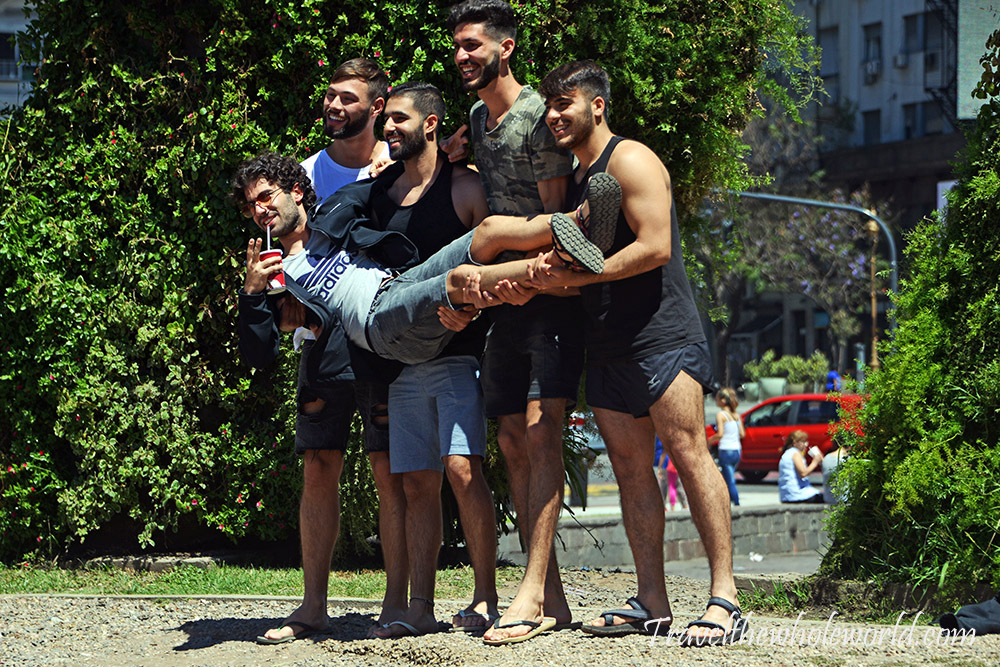 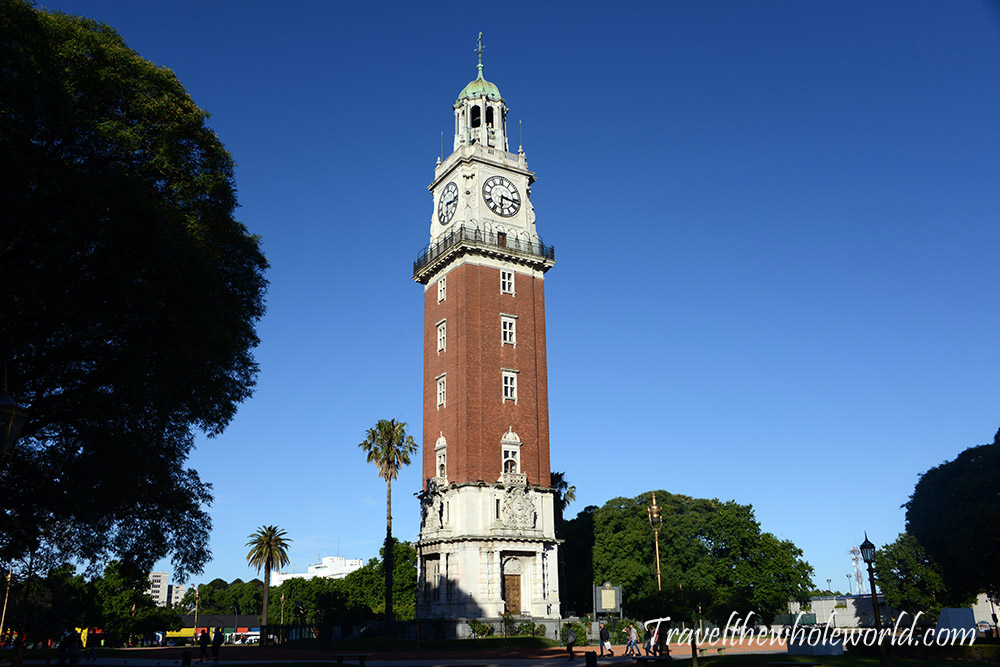 Buenos Aires is famous for its hybrid of South American and European culture. One great example is this Palladian style built tower created by British residents of the city. It commemorated the May Revolution, which effectively began the declaration of independence from Spain in the early 19th century. The tower has stood for over a hundred years, and is a beautiful example of European architecture that dominates this sub tropical city. 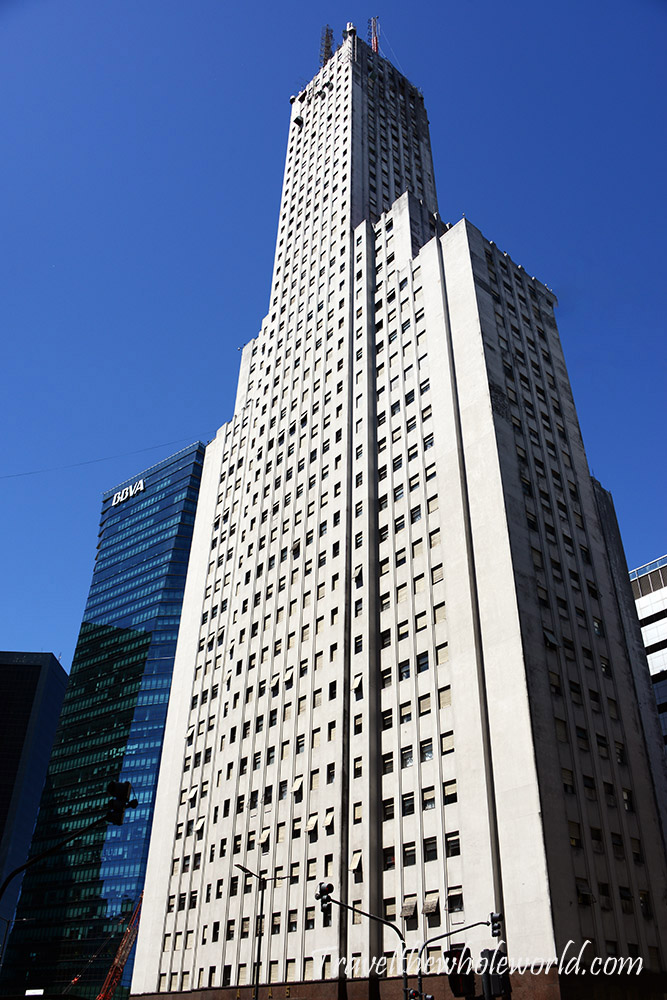 Of course the city has plenty of modern buildings such as these massive skyscrapers. I hate posting vertical pictures on my site, bute there was no other way to capture these giants! 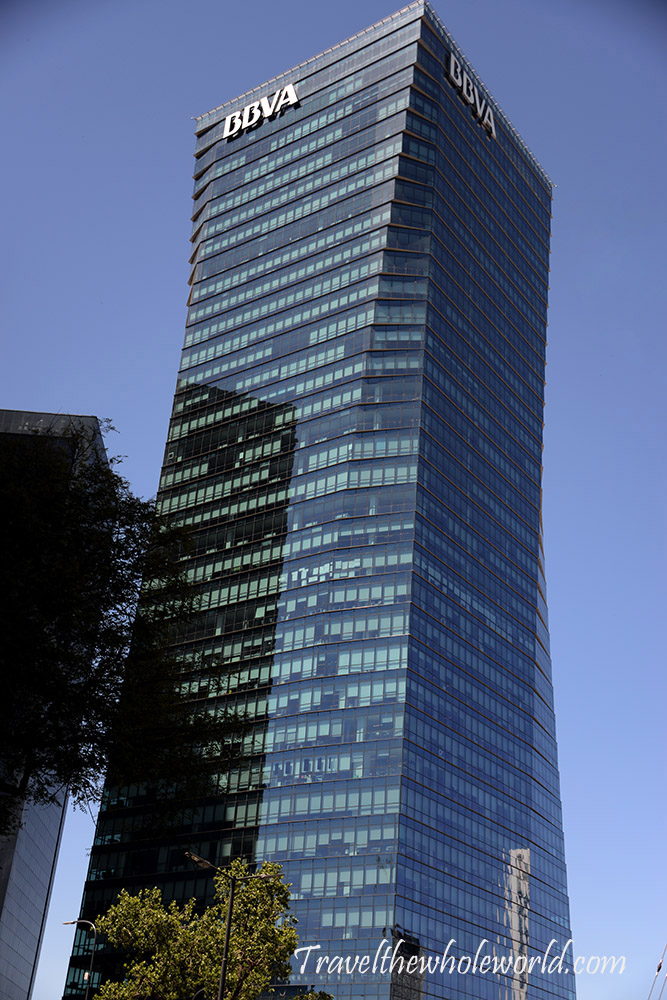 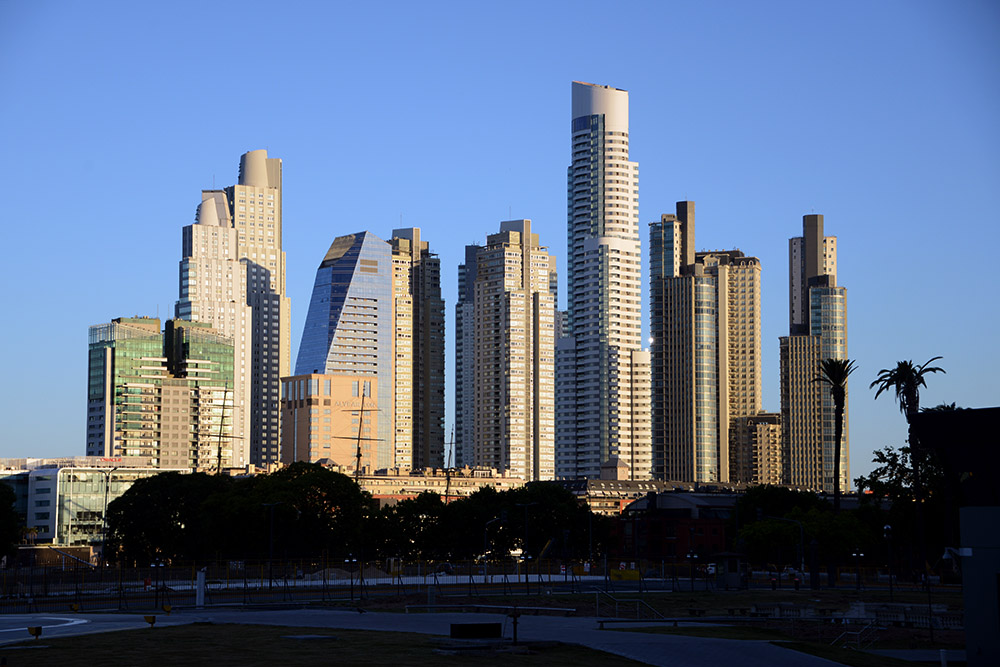 Even though I’ve been to Buenos Aires multiple times it’s a huge city that has many districts I haven’t yet explored. These large coastal buildings I saw from the city center are just another place within the city that I’ve yet to visit. I spent most of my time exploring the heart of the city wandering through random streets like this one below. 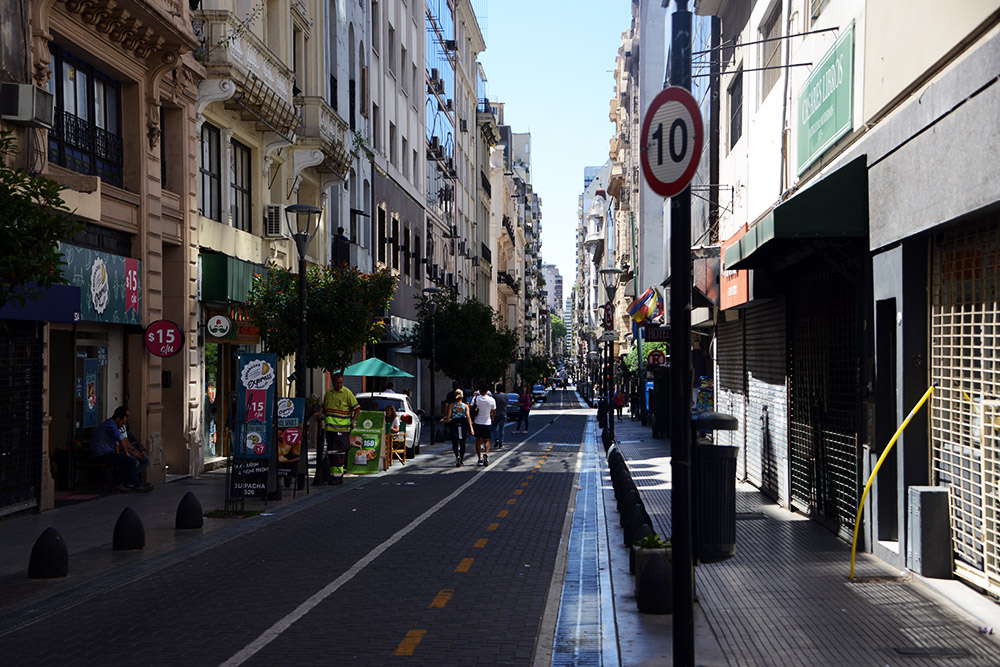 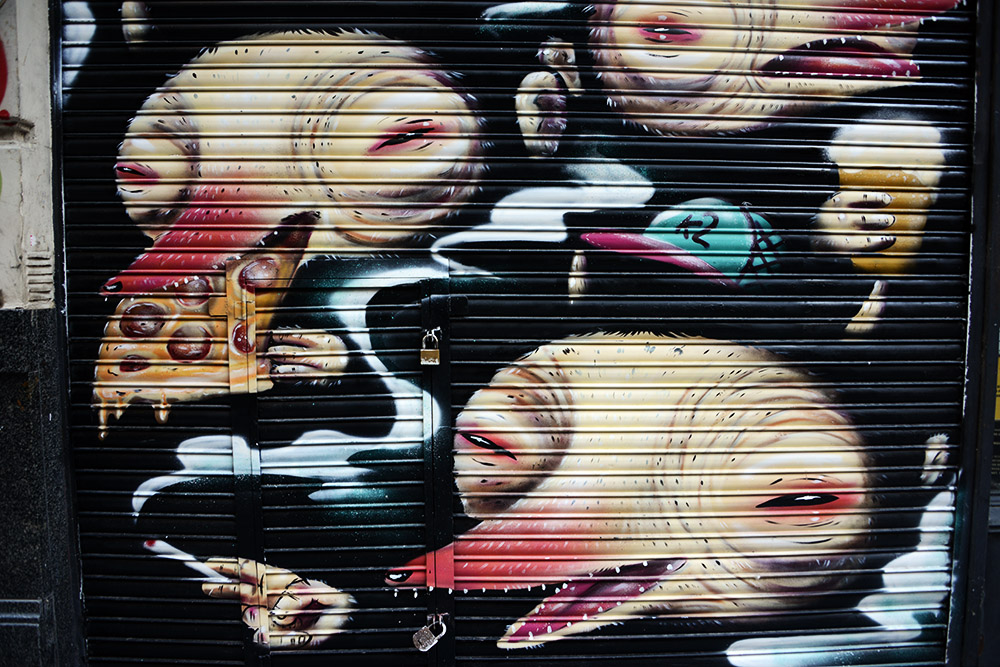 I’ve always viewed Buenos Aires as a nice city, even though everyone had always talked about it suffering a bad recession. All major cities generally have places you shouldn’t go to, but the vast majority of places you’d want to explore here are safe and well kept. During my first trip I was taking a taxi and to the airport and had to run in a building to grab something. I kept my carry on with me which had all my important things like camera and documents, but left my main backpack in the cab. When I came back the driver was shocked I had done that, saying any other taxi driver would have taken off with my belongings. Whoever would have done that would have been rewarded with a bag of dirty laundry, but I wonder if he would he still give the same warning fifteen years later. I’ve always felt safe in the city, even through the alleys. This one that I went through had some creative graffiti above and a rat; just a typical alley experience! 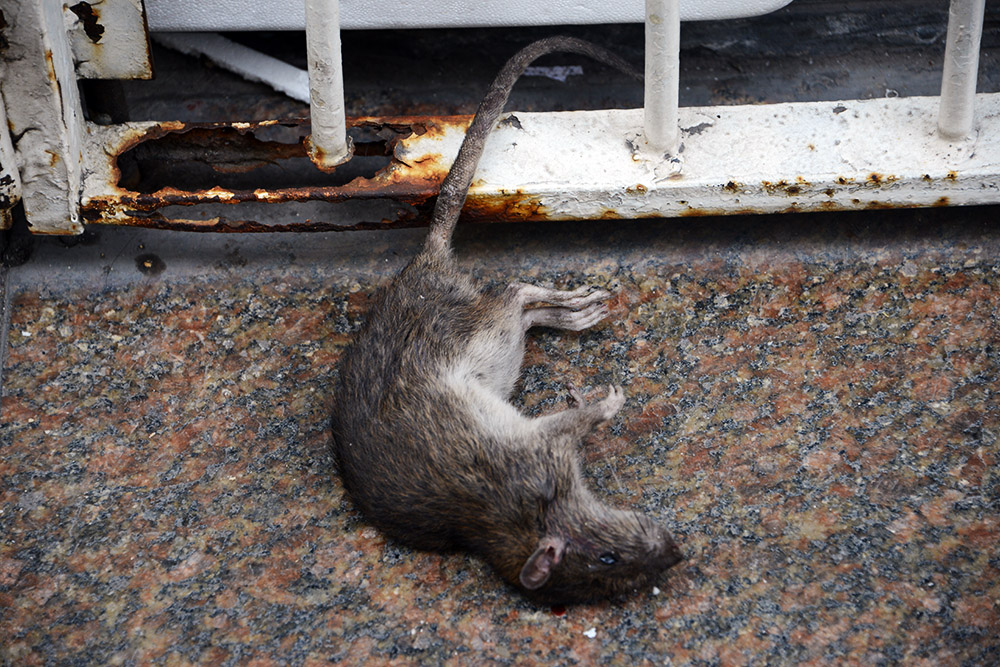 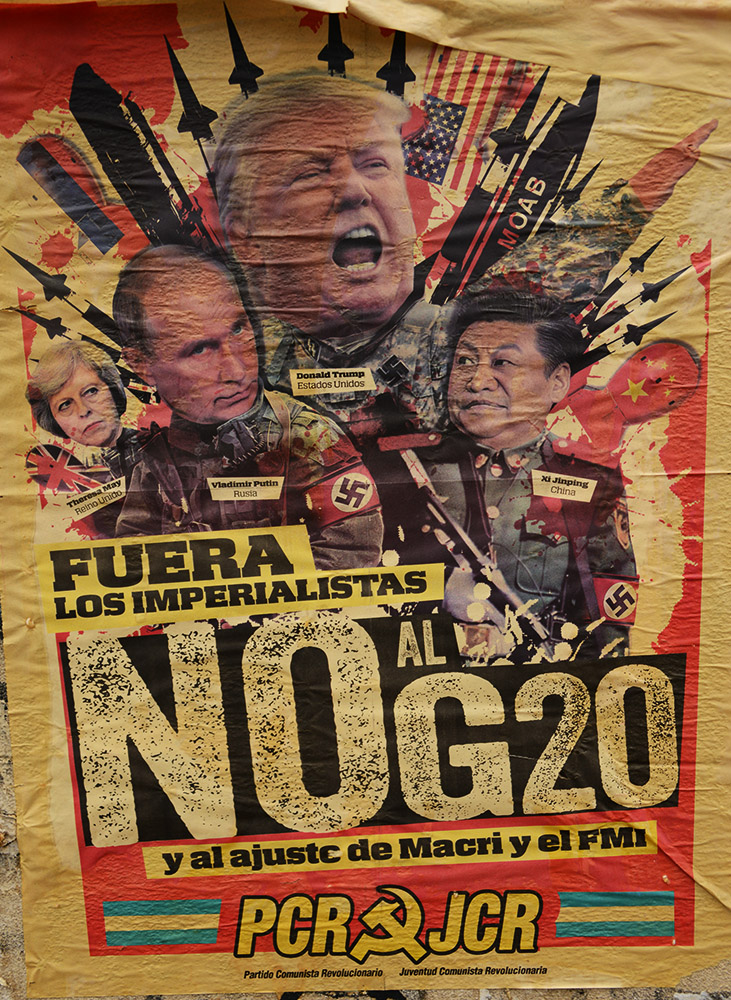 My most recent trip here took place during a world leader summit. This poster is clearly protesting Trump, Tavarish Putin, and Jinping. I’m not close to supporting either of these guys, but I still found it entertaining that someone depicted them all as Nazis. There was a lot of graffiti protesting the summit throughout the city, as well as other flyers and posters. 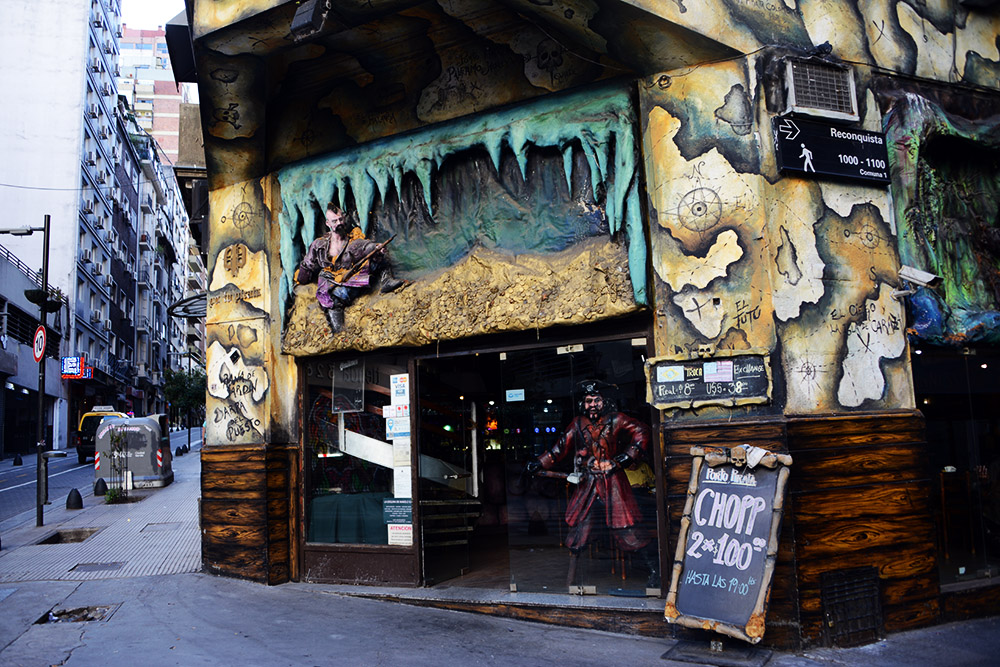 During my random walks I came across lots of different restaurants and businesses. Some of the restaurants were really classy, others were creative like this pirate restaurant, and there were plenty of dive bars in between. The photo below was the entrance to an apartment building that was on the elegant side. I’d love to know how much a room cost here a month! 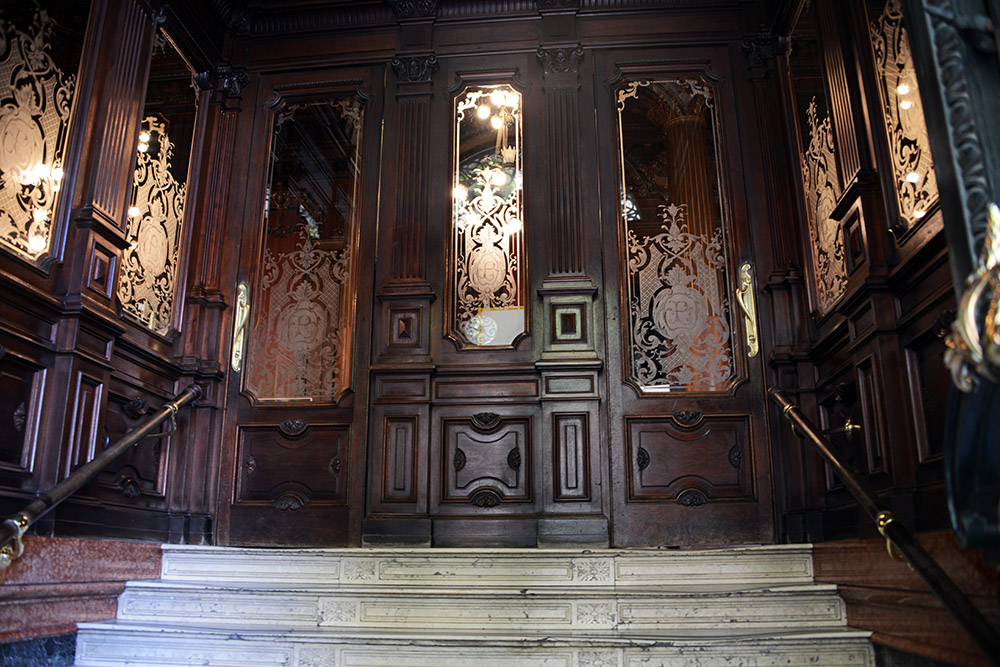 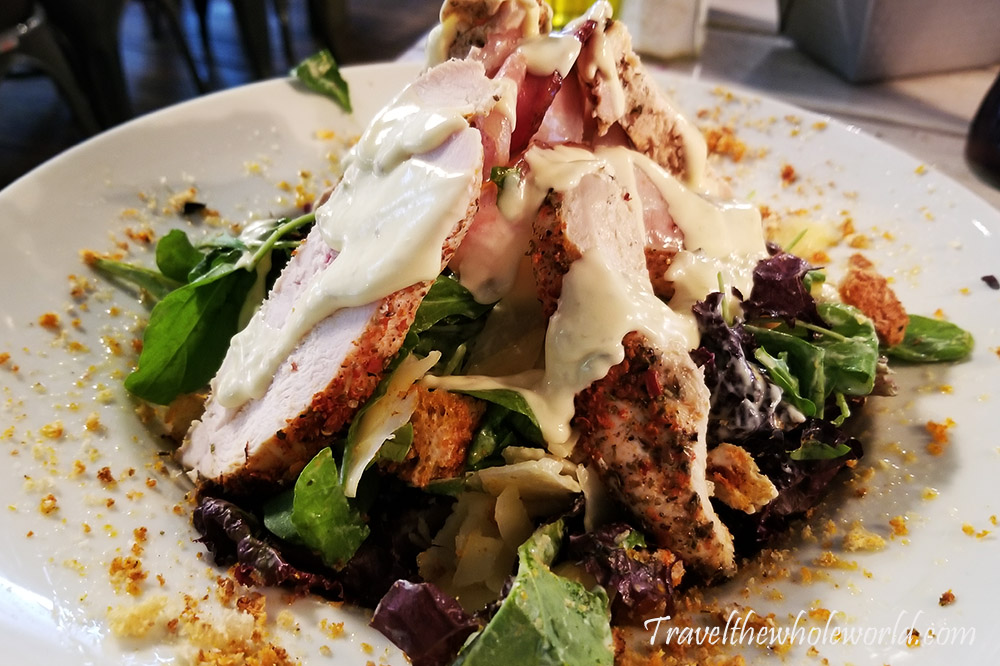 Argentina is famous for its cuisine, namely their steak and wine. I didn’t capture either while I was in Buenos Aires, but being that I rarely take food photos I’m happy I at least bothered to capture this giant salad. Although wine is the drink of choice in Argentina, I have a special relationship with beer in the country. It was actually here that I finally acquired the taste for beer, specifically with Andes Negra. I was a bit disappointed that the beer isn’t popular outside the mountain regions in the country, so I had to get Patagonia beer which turned out to be an excellent choice. Even though I’ve been to the city twice, I feel like I’ve only scratched the surface of Argentina’s capital. Next time around I’ll be sure to visit more of the city’s 48 districts. Maybe check out the colorful neighborhood of La Boca, visit the underground nightlife scene in San Telmo, and be sure to catch a Tango dance. 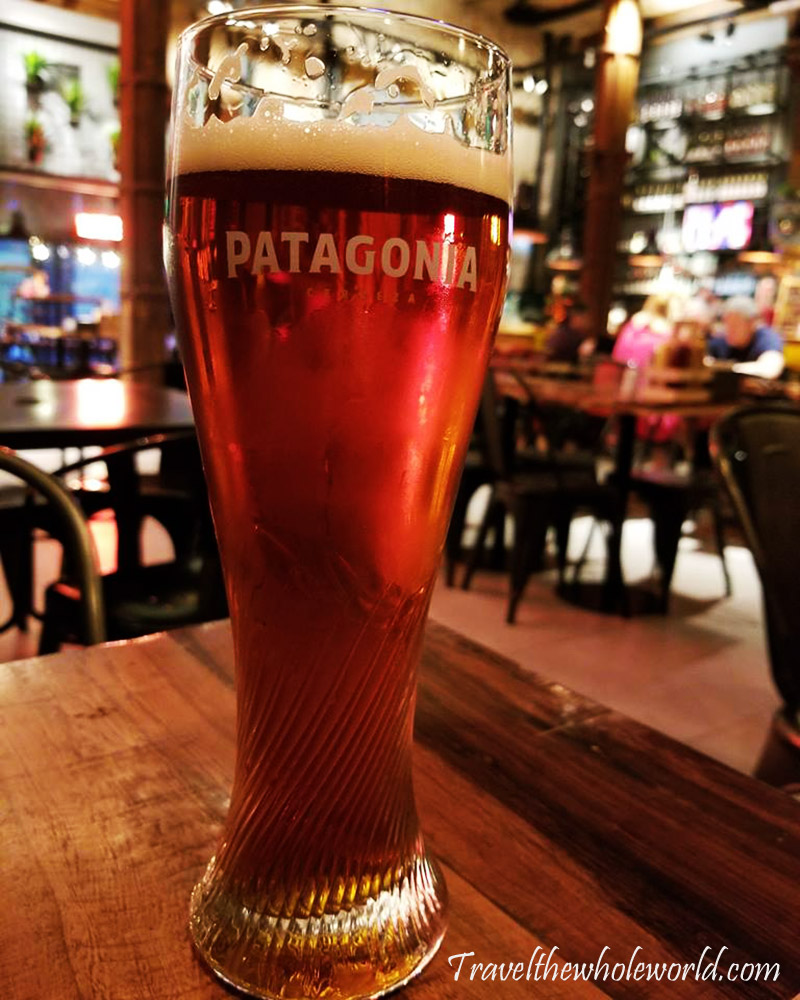