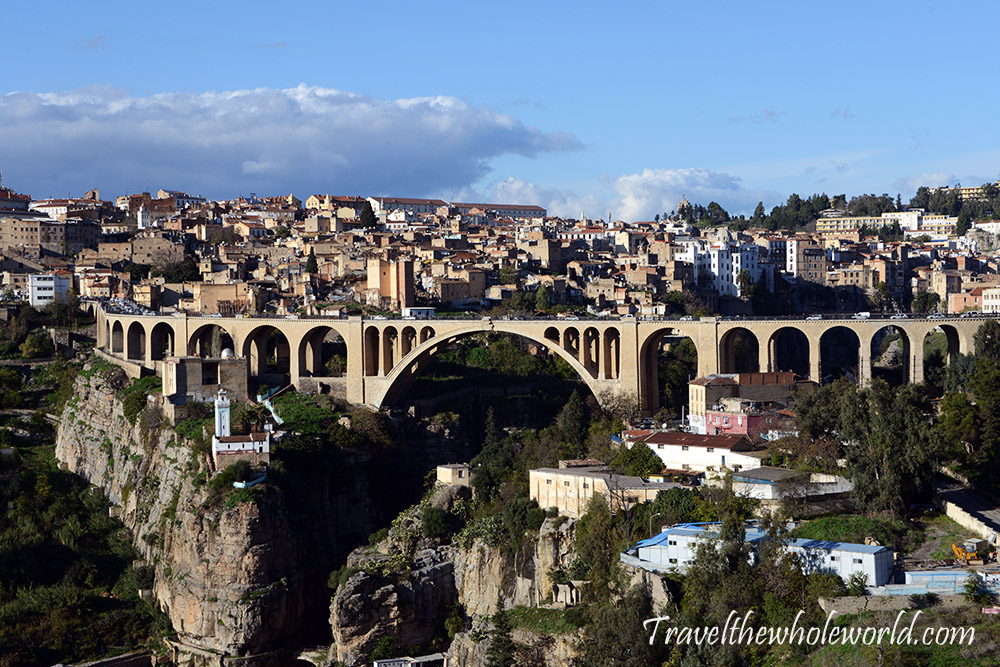 Constantine is probably the most amazing city in all of Algeria. Filled with ancient history, natural beauty and some of the most dramatic landscapes I’ve ever seen, Constantine is definitely a highlight of North Africa. I’ve been to a few cities around the world that call themselves, “City of Bridges”, but none of them deserve this title as much as Constantine. Built among dramatic ravines and cliffs, bridges are an essential part of both the city’s infrastructure and soul. Photographed above is by far the largest and longest bridge in the city; the Sidi Rached Viaduct. 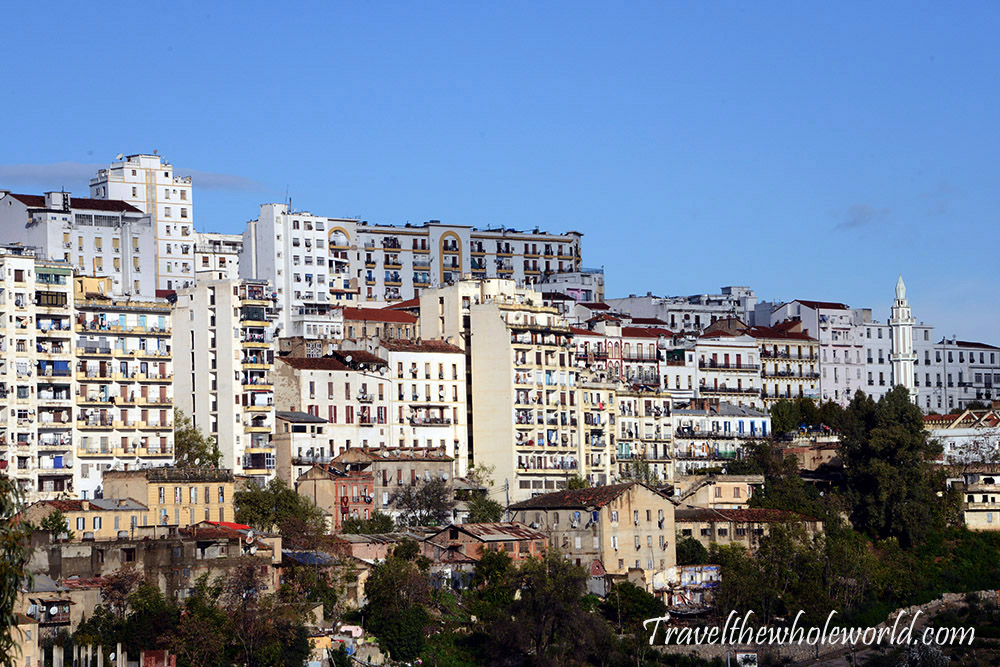 From the center of the city, Constantine might look like any other city in Algeria. There are a few moderate sized buildings and a busy downtown. The city center is pretty busy both with traffic and pedestrians. 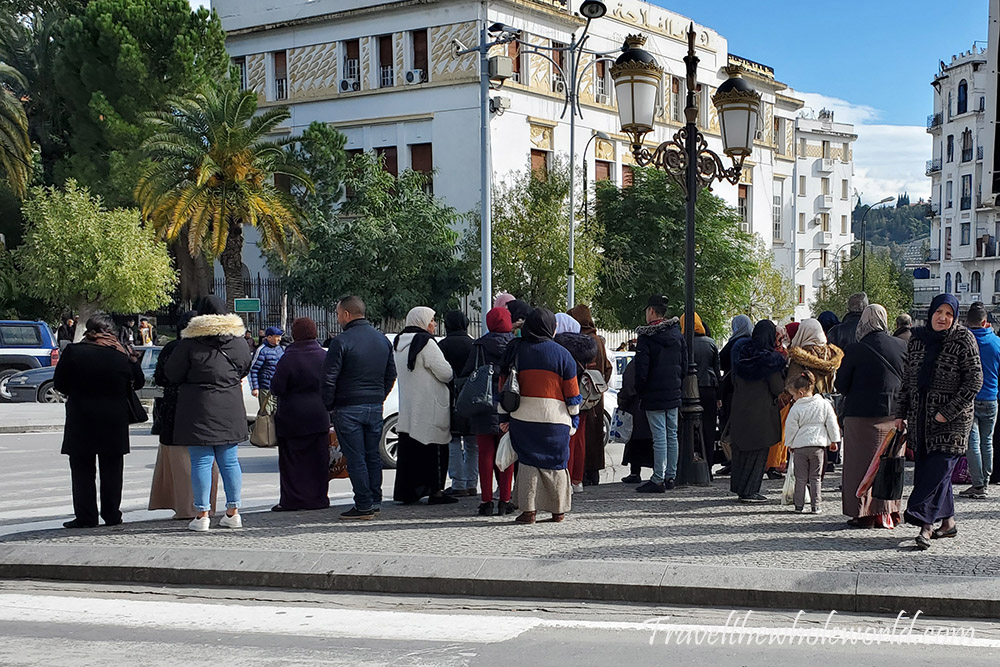 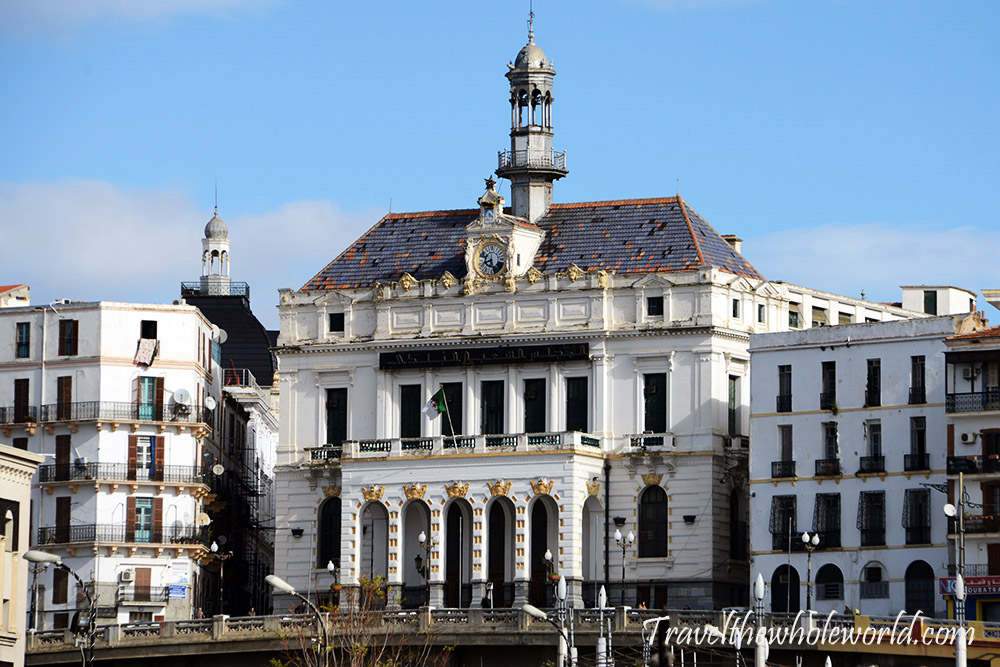 Unlike Algiers, Constantine didn’t seem to be dominated by French architecture. Above is the former courthouse, which a local friend pointed out is not nearly as beautiful as its modern counterpart. It wasn’t until later that I recognized how true this was, the new courthouse is much more boring in comparison! 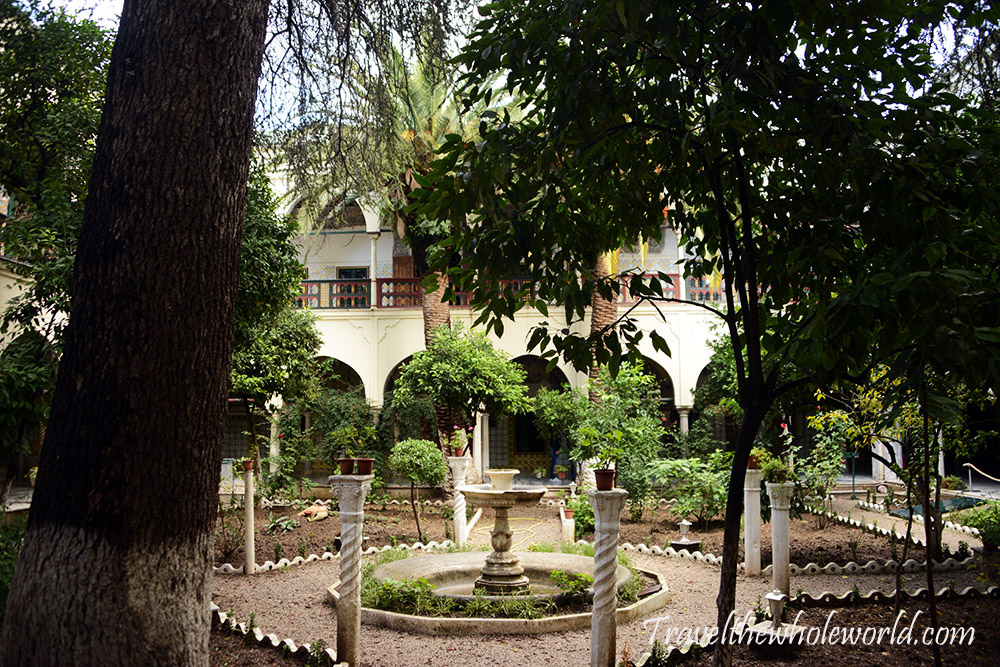 One of the biggest cultural sites in Constantine is the Ahmed Bey Palace. The Beys of Constantine ruled over the city for centuries, beginning from 1528 until the end of Ahmed Bey’s ruling in 1837. Ahmed Bey actually created this large complex, which has four large courtyards and more rooms than I can remember. The photograph above shows the Garden of Oranges, while below you can see the colorful decorations of the place. 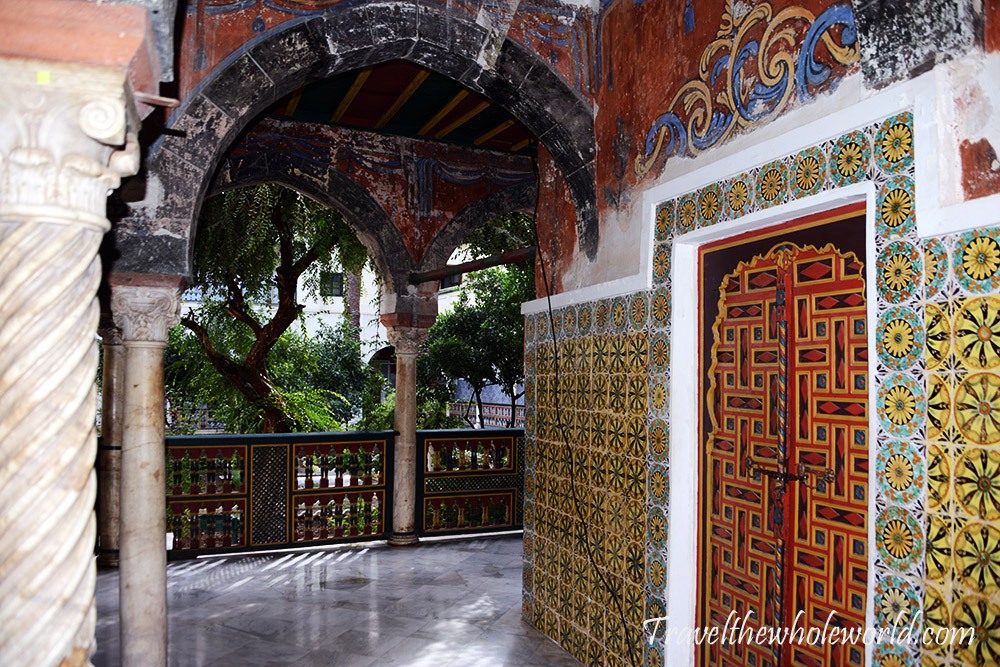 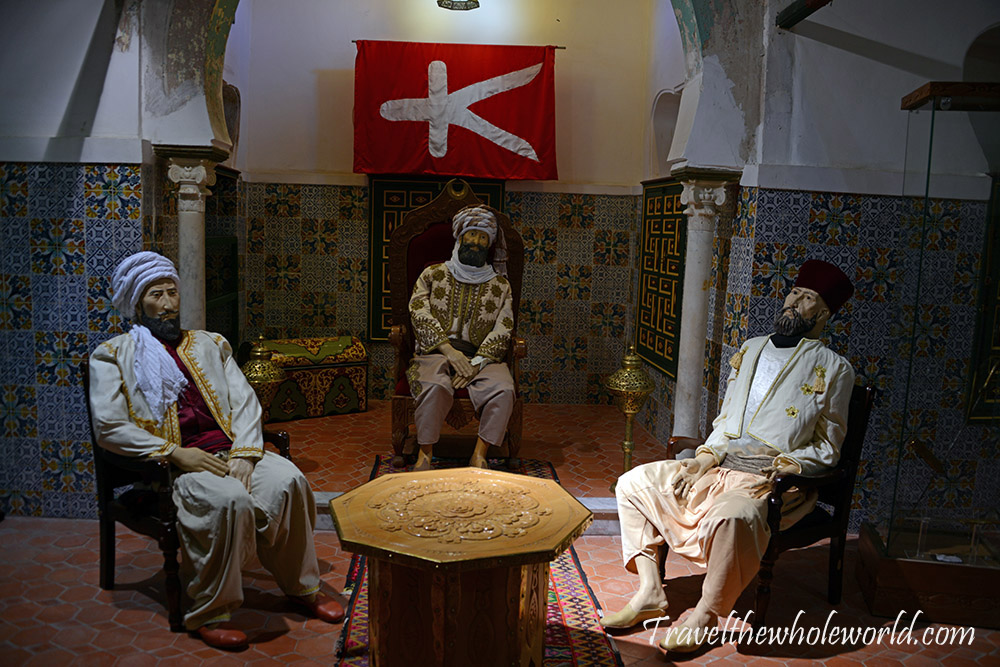 Bey palace has 266 marble columns, and every room, door, and piece of the palace was intricately decorated. You can imagine what an incredible place this was to those living here in the 19th century. One of the rooms had lifelike figures of Bey and his officers having a meeting in one of the rooms. Below is a small crypt from the nearby Abd al-Rahman al-Tha’alibi mosque. Here is you can find the tomb of Ahmed Bey who passed away in 1850. 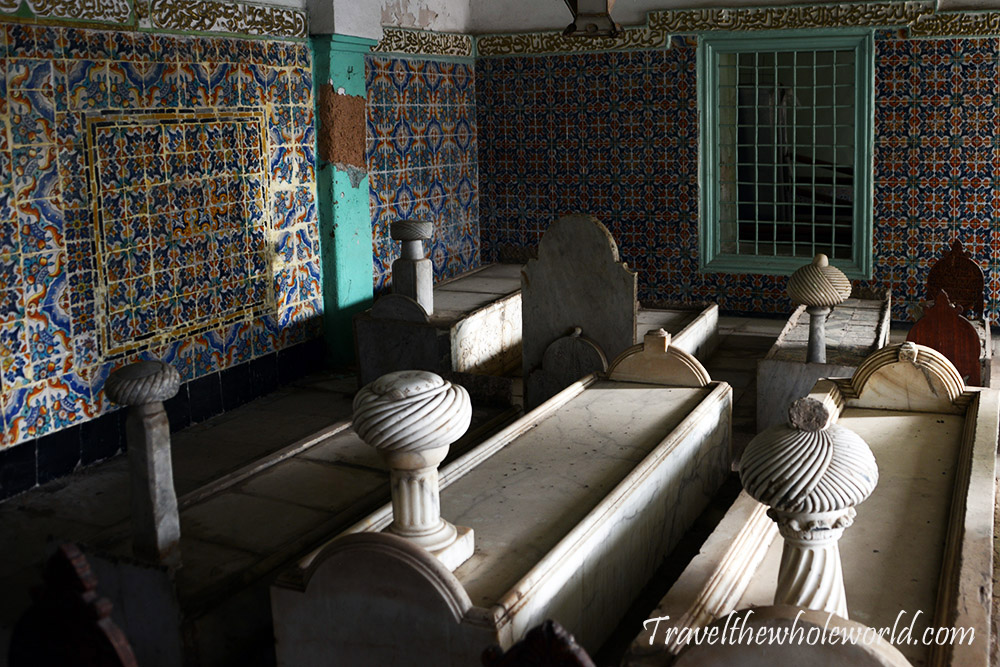 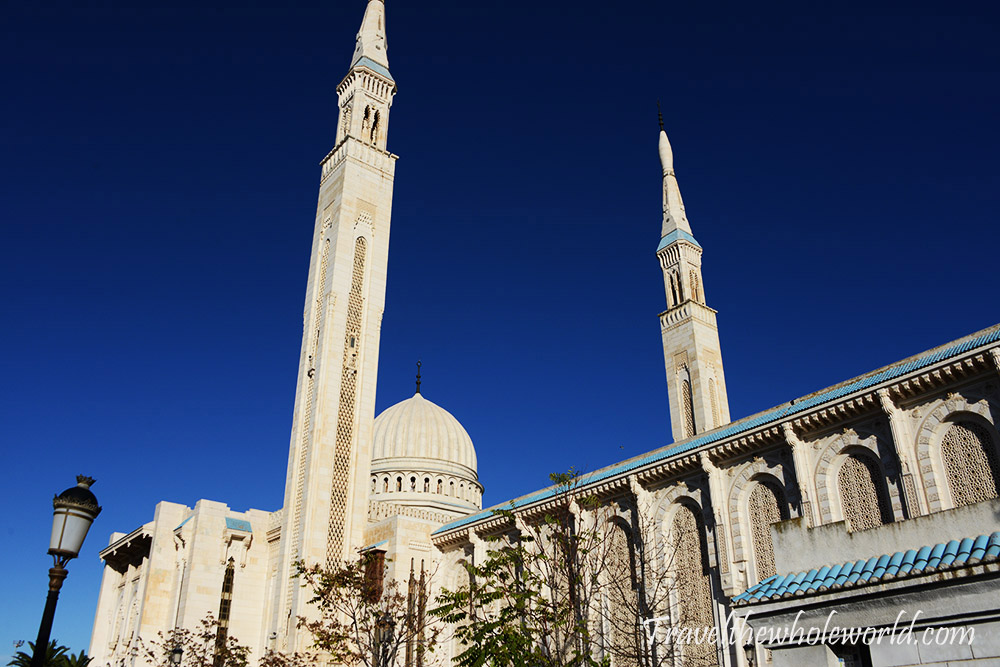 I only made it to the Abd al-Rahman al-Tha’alibi mosque with the help of a local. But you can’t possibly miss the Grand Mosque of Constantine. The Emir Abdelkader Mosque was built in 1994 and is visible from most parts of the city. This was probably the most beautiful mosque I have seen so far in all of Africa. The mosque is so big that I found it difficult to properly photograph. I absolutely loved its towering minarets. 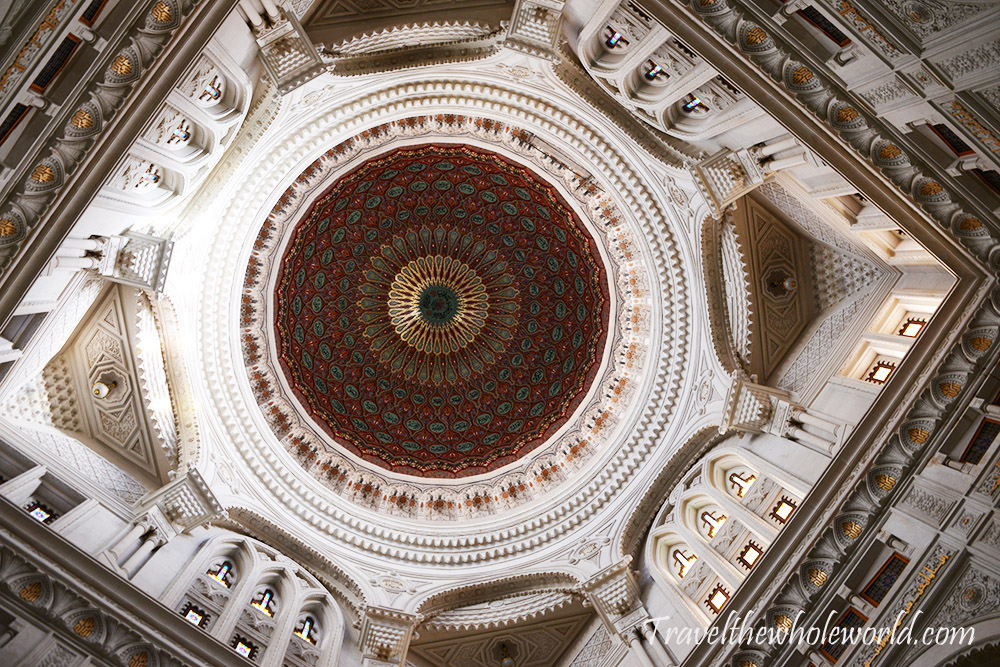 The mosque has a capacity for about 15,000 people, making it one of the largest mosques in the continent. Part of the reason why it is so large is it is almost the first modern Islamic University in Algeria. These two photos show the mosque’s dome above and the prayer area below. 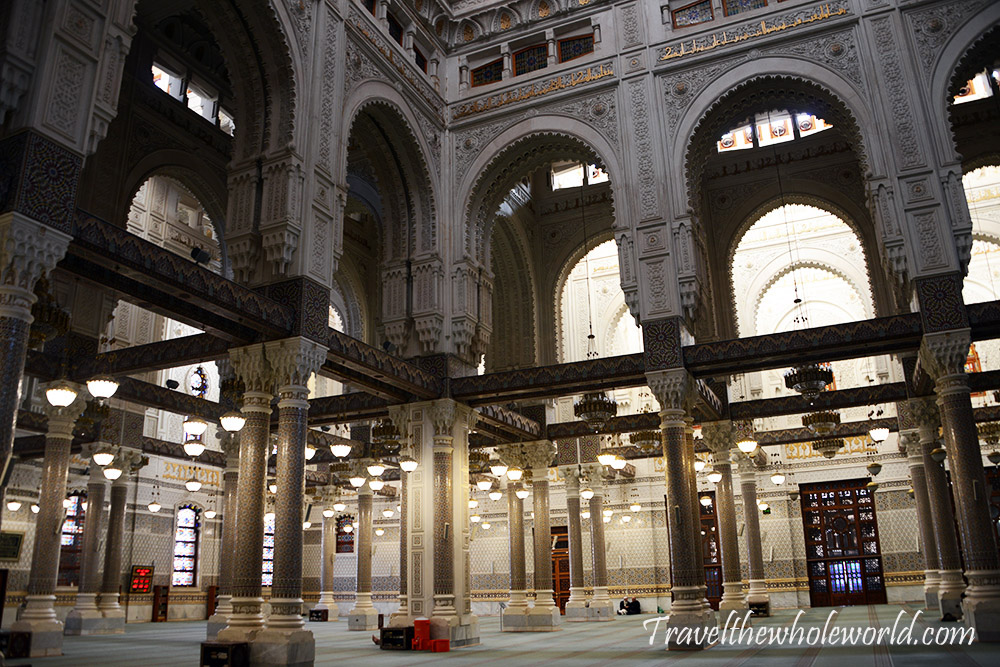 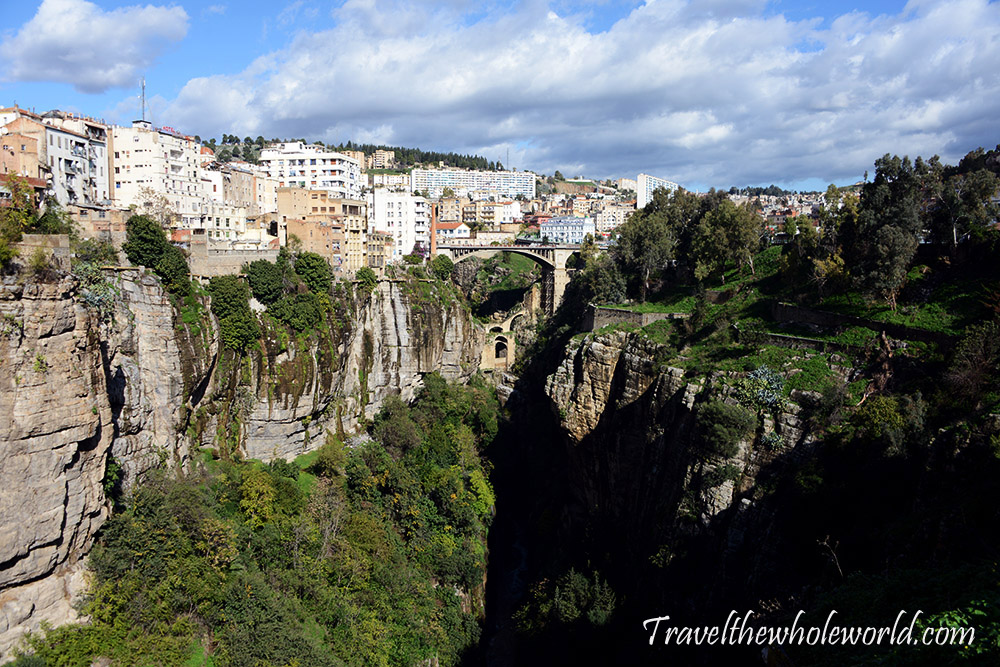 If you take a walk through Constantine, it won’t be long until you cross one its beautiful bridges. There are about half a dozen famous bridges here, and this canyon is right in the heart of the city. I had long ago seen photos of the houses built along these cliffs, and it’s more impressive in person. Aside from the landscape, the rock climber part of me wanted to explore these walls. I’m sure there are some incredible routes to be found here, and perhaps this is the only place in the world where your anchor point could be part of your own house. 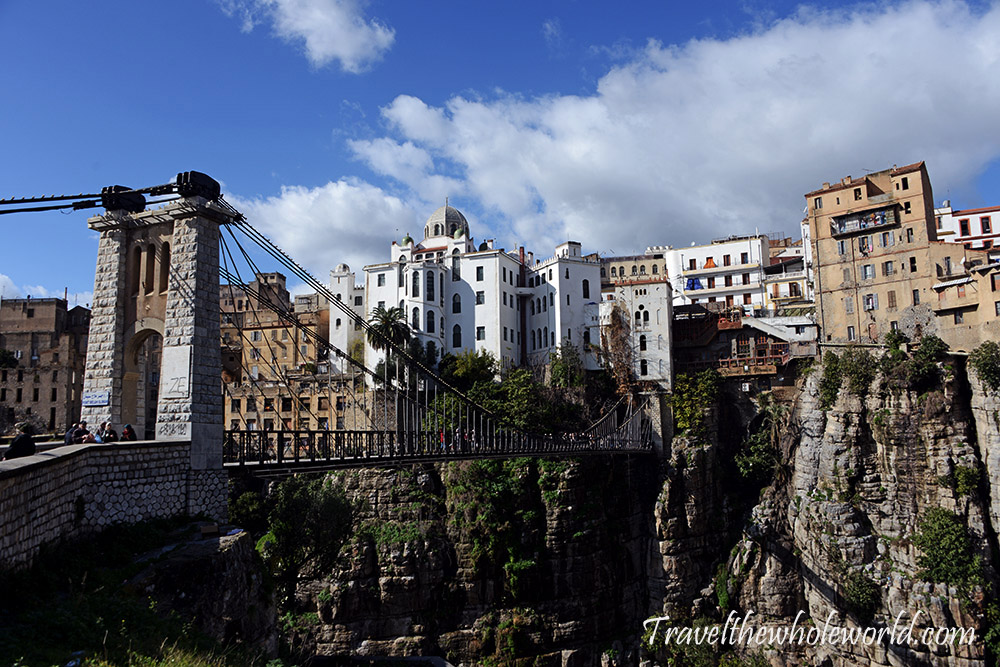 My favorite bridge in Constantine was Mellah Slimane. This bridge is in the center of the city, and was also the most heavily used pedestrian bridge. There were always a large amount of people crossing, and I found it amusing that at the other end of the bridge was an elevator that you can ride up for a fee. The majority of people used the elevator and avoided the stairs, and I did as well for the experience. 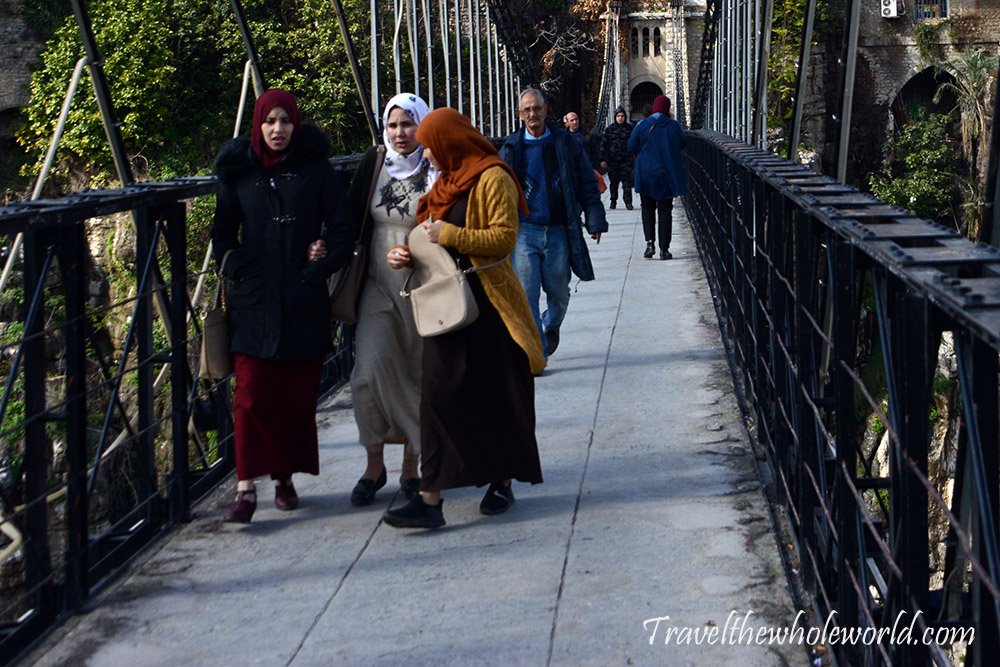 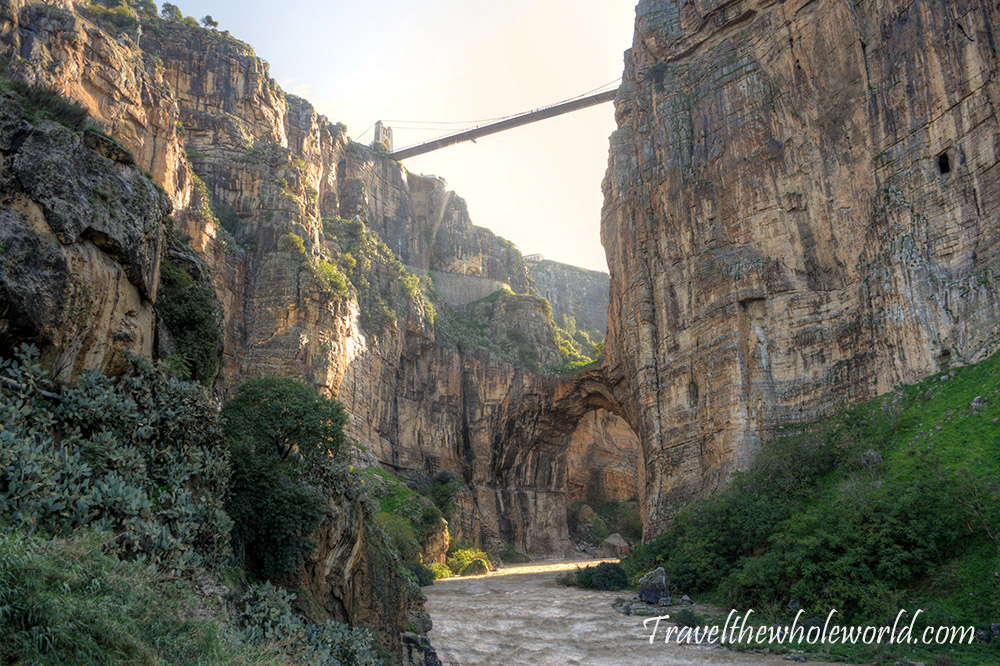 I said Sidi M’Cid was my favorite bridge, but honestly it’s hard to say. This amazing sight was actually my first visit in Constantine. Needless to say, Bridge Sidi-M’Cid spanning across this massive canyon walls with a natural bridge in the background and raging river were one of the most amazing sites I had ever seen. The main part of the city is further up the river and is below a sort of aerial shot from the top of the bridge. It’s hard to imagine long ago anyone ever thought it possible to create a city here. It’s even more incredible that they were successful. 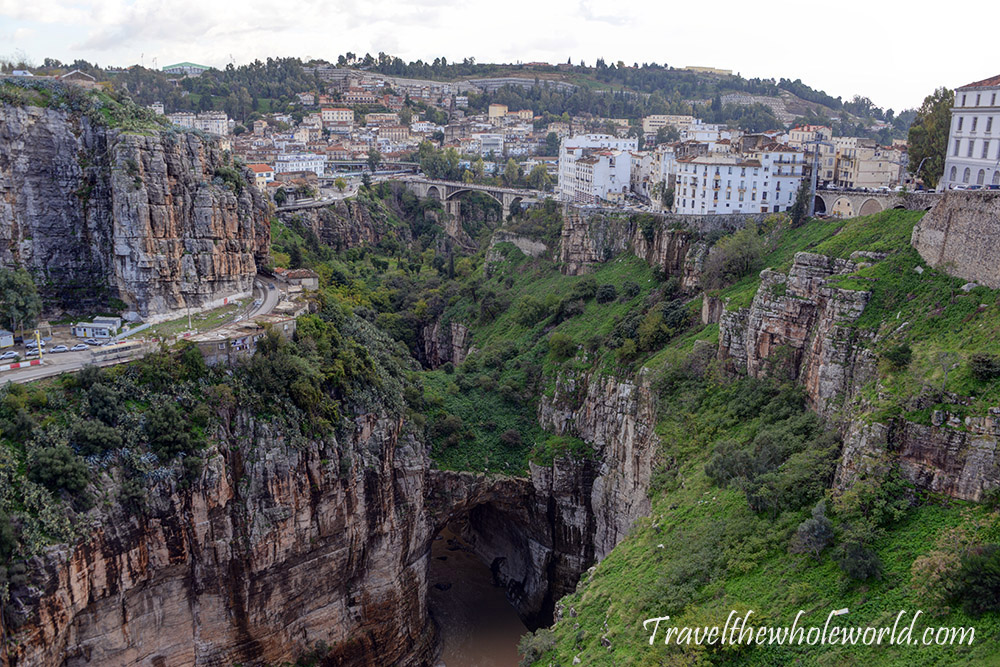 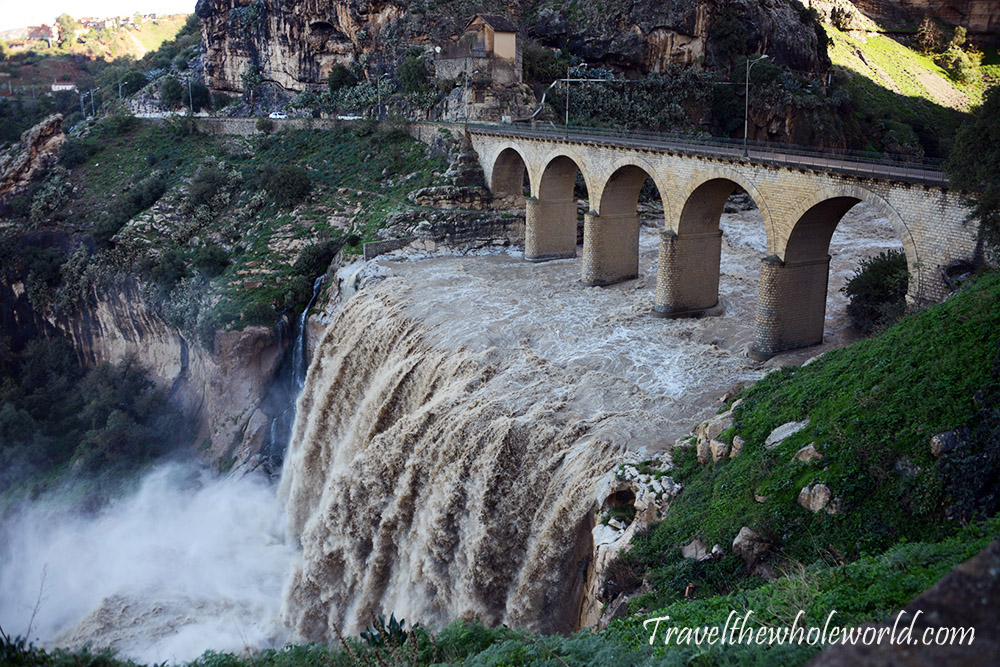 If that wasn’t enough, I actually took the photo from this other bridge which is at the base of the canyon. The river was quite powerful when I was there, and all the locals with me told me they had never seen the river so high before. Parts of the river had a small rainbow from all the mist, but not in a place that I could properly photograph. 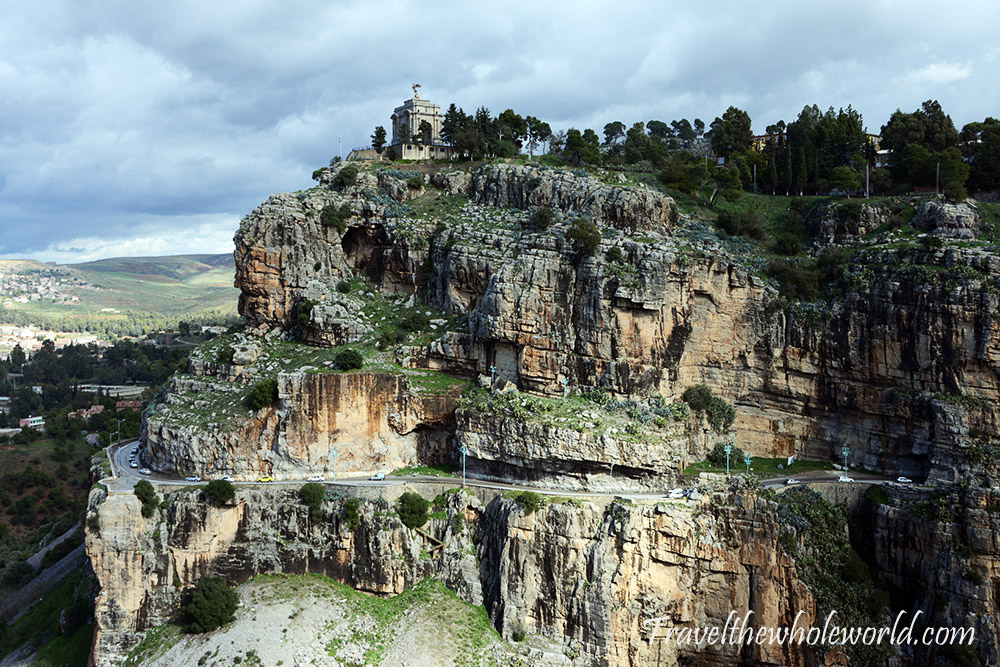 From Sidi M’Cid, you can’t miss this memorial on an adjacent peak. I actually crossed the bridge by foot and then did a short hike to what turned out to be a World War I memorial. The inside of the memorial has over 800 names of those that lost their lives in the war. The list seemed evenly divided between Algerians and French. 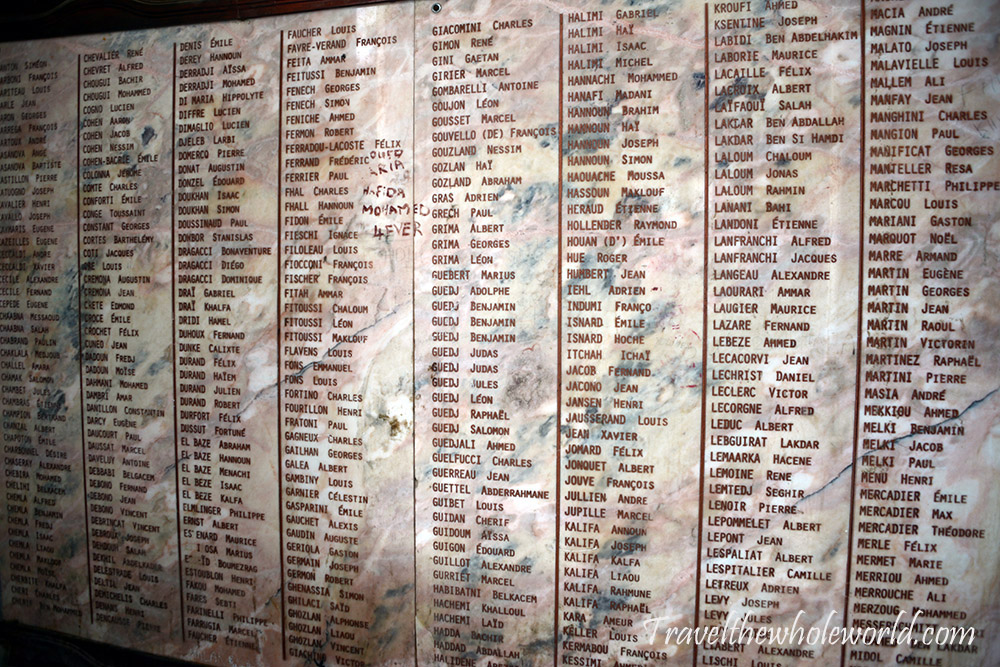 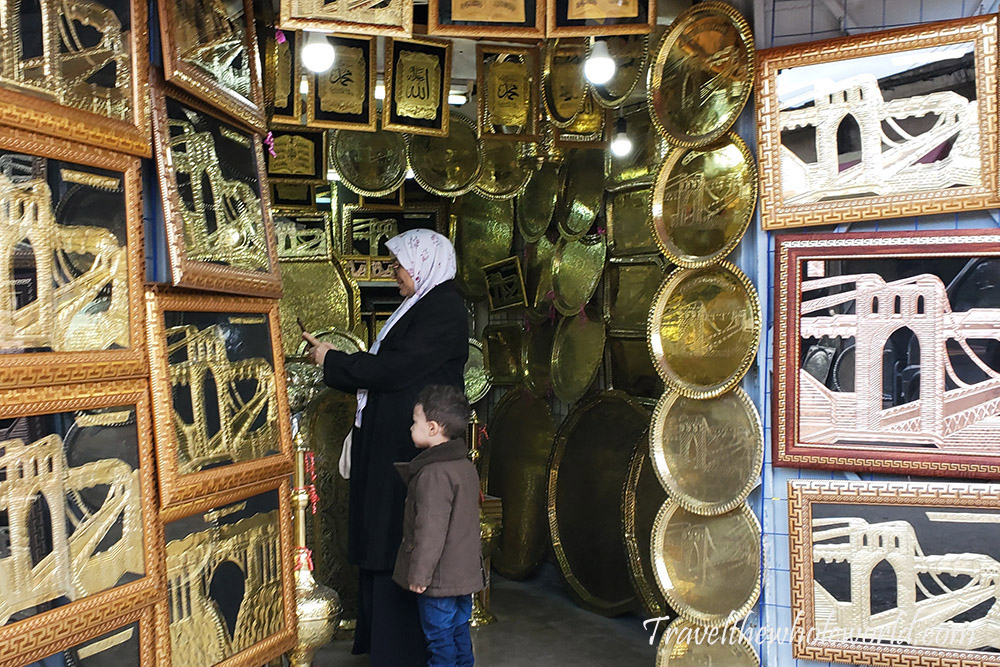 While being the City of Bridges will always be what Constantine is most famous for, perhaps next up would be its metal art work. In a certain neighborhood you can find lots of artisans hammering away as they create plates, decorations, and other metalwork in the city. Though the artwork is created in a specific neighborhood, you can find it for sale all over the city. Below is one example I saw for sale in my hotel. 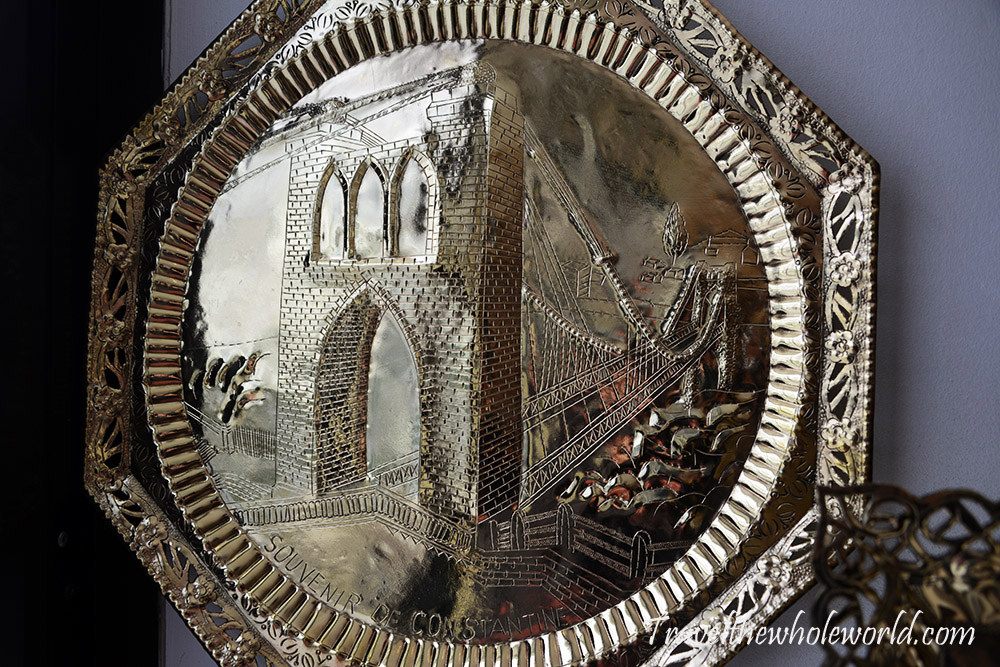 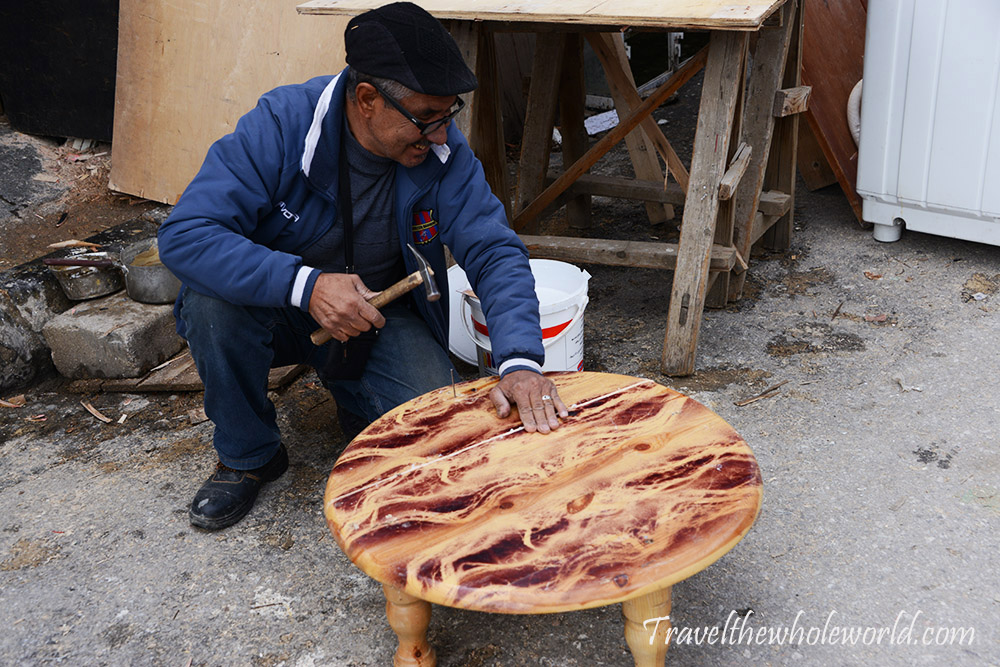 The metal is definitely the most dominate creation here, but several streets had electronics, plastics, and other wholesale items. This guy was nice enough to let me take his photo as he did some woodwork. 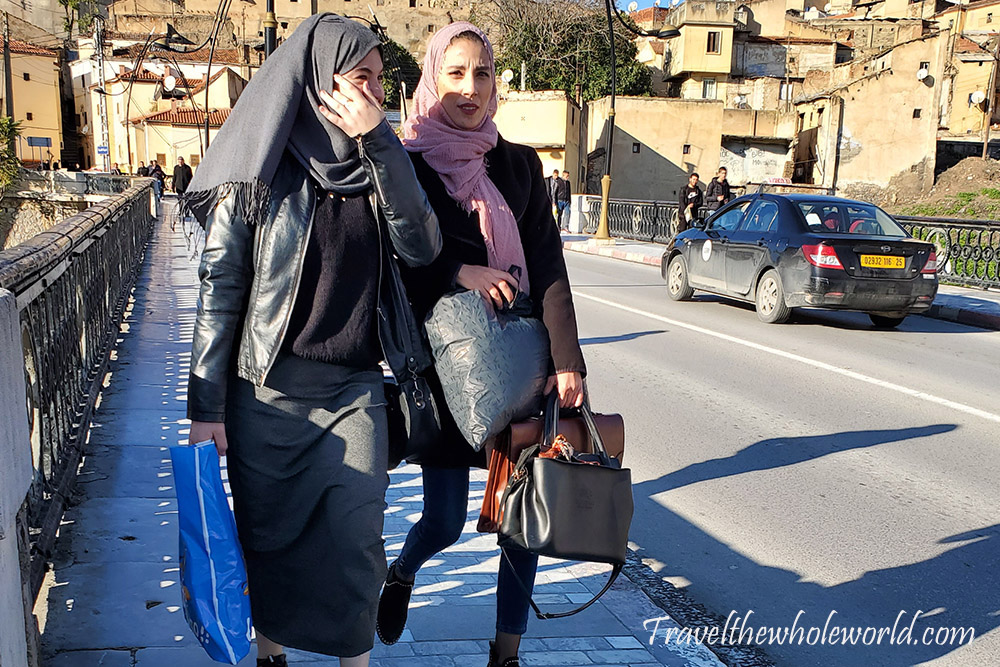 Constantine was my last place to visit in Algeria. After going to the Djanet, the Sahara and Algiers I was feeling lazy. I spent some time roaming the streets of Constantine. I couldn’t resist taking this photo of these two women who looked like they just went to a Black Friday shopping event. This photo below was from the main shopping street of Constantine. A fairly busy place with tons of pedestrians and all kinds of shops lining the streets. 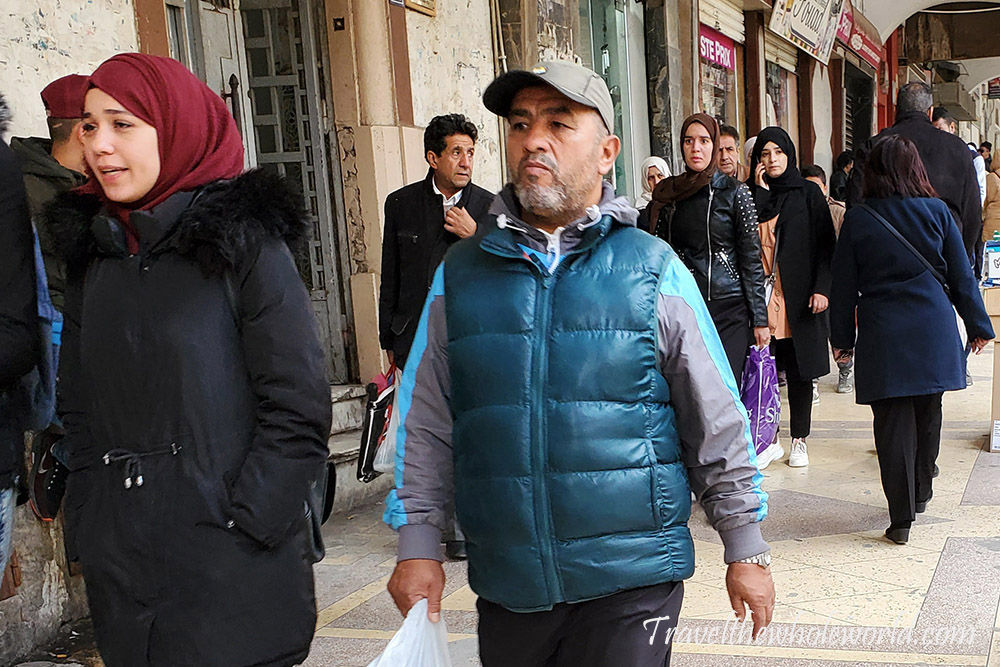 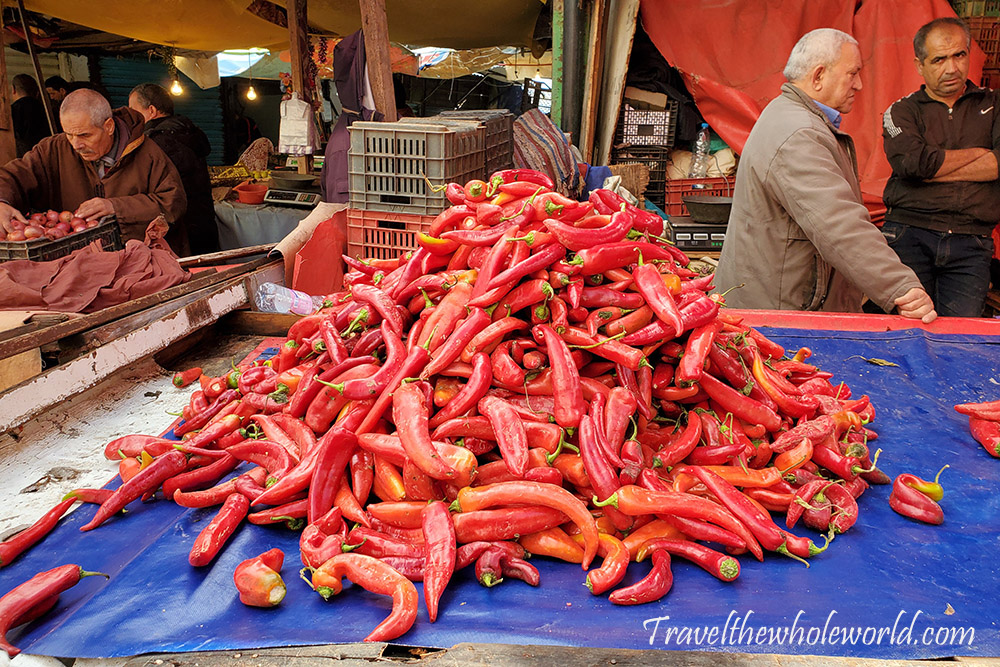 Elsewhere in the food market I found most of the typical fruits and vegetables, but what made this one unique was its massive piles of harissa. I figured harissa was a local pepper due to its popularity here. A few months later I questioned this after I saw harissa as a dipping sauce in Minneapolis, but a quick google search proved harissa is native to north Africa and a local favorite!. Harissa from what I could tell was mostly popular in North Africa, while all Arabs love their sweets. Below is a shot from one of the many bakeries that specialize in sweets. 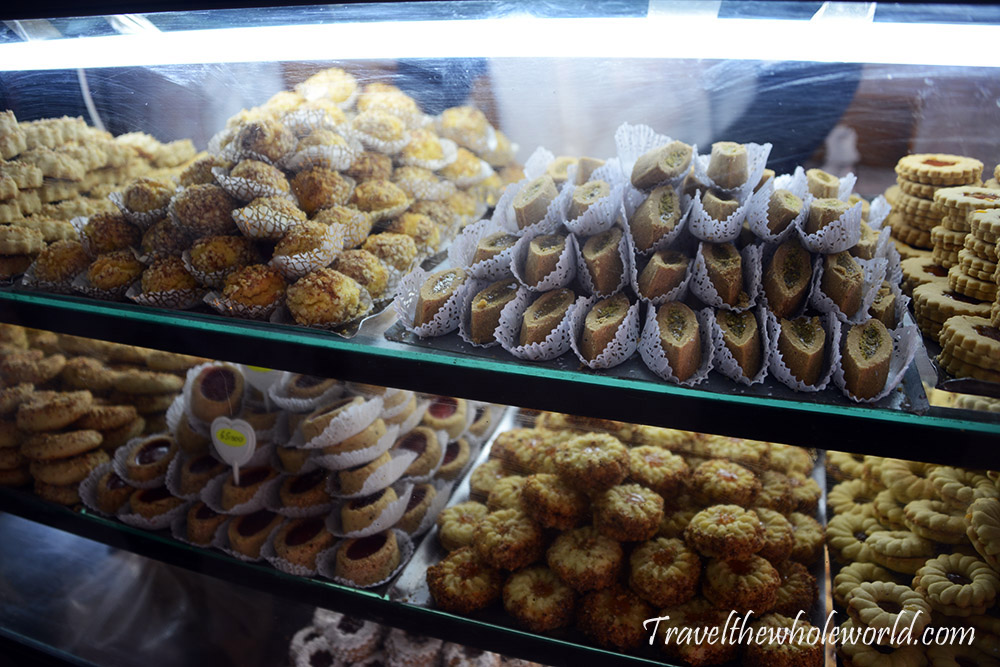 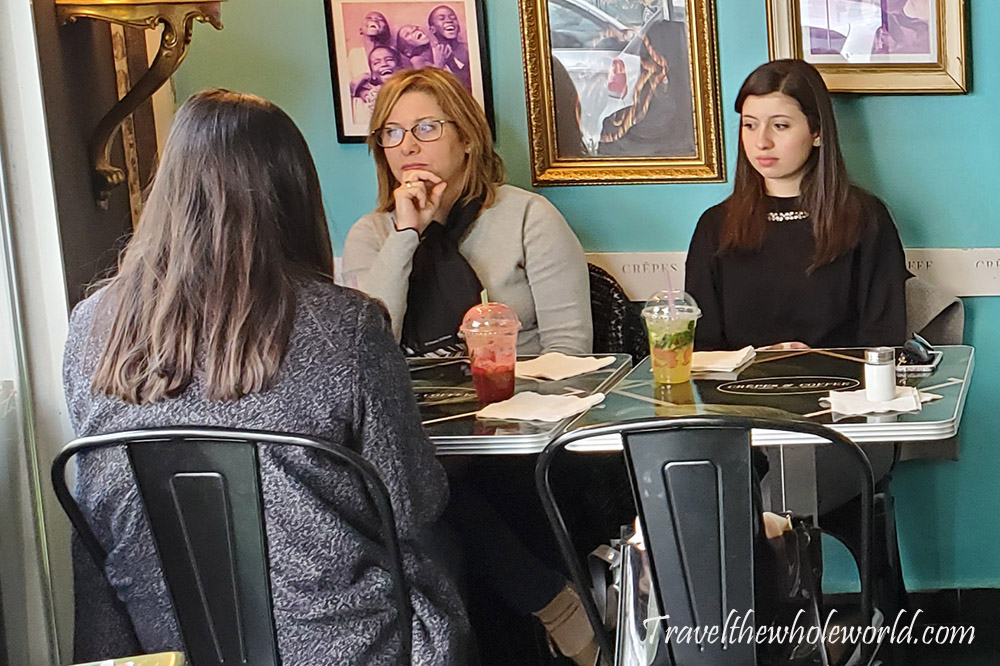 And finally on my last day, instead of more exploring I wanted to hang out and simply rest a bit. I searched online for a coffee shop from my hotel, and found one with great reviews. After a long walk and entering a quiet empty neighborhood I thought for sure the directions were wrong, but then I stumbled into this place. The place seemed popular with the younger crowd as well as couples, so I found a perfect place to get some lunch, coffee, and just to hang out and people watch.