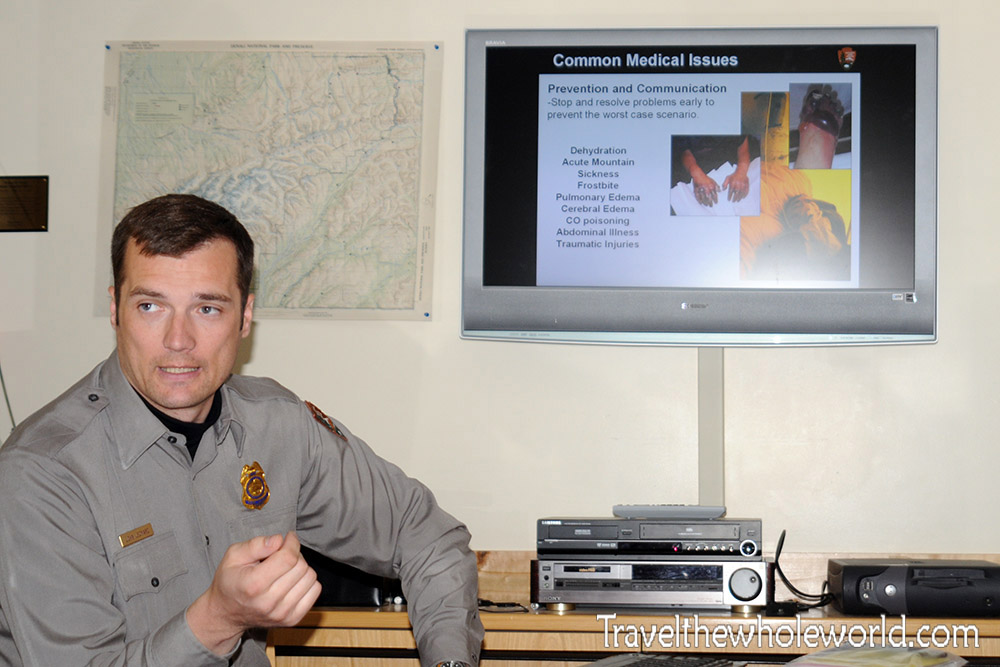 Like all major mountains, you’ll need a climbing permit and to check in with the local ranger station before your expedition on Denali begins! Denali’s ranger station is located in the small town of Talkeetna. The briefing took about 30 minutes and the main discussions focused on environmental rules and the risks of attempting Denali. We talked about such things like how deep the snow caches were required to be, the current weather and crevasse conditions, and even how to remove our own waste from the mountain. The expectation was that we were all competent climbers; there were no tips or discussions on how to increase our chances to the summit. The climbing season was just beginning when we arrived, but some early expeditions had already finished. So far 39 people had finished their climbs and out of those only 11, or 28% were successful. 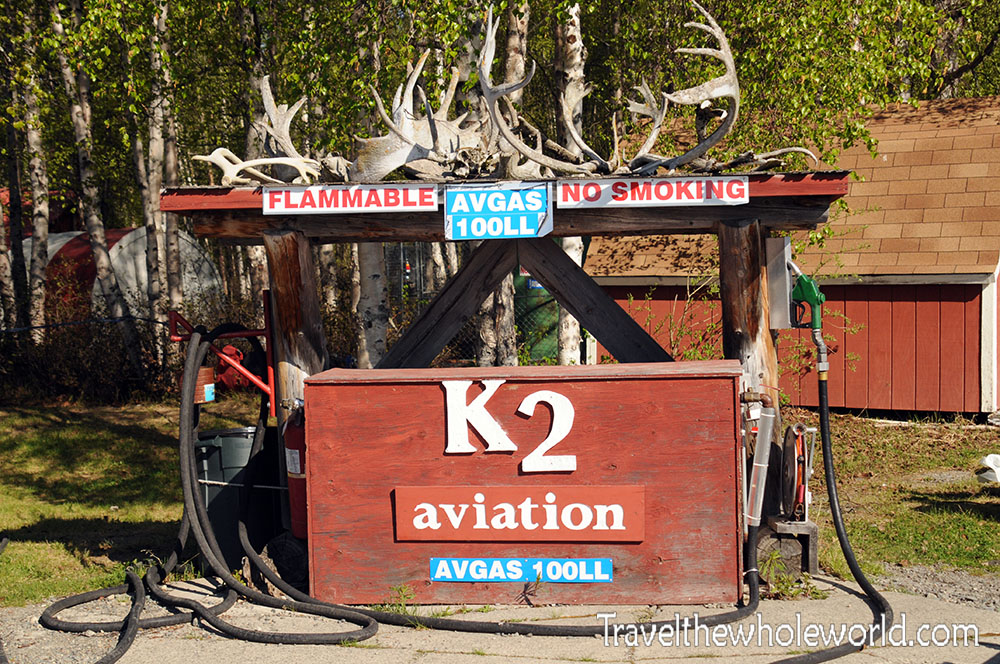 At this point my main fear was getting frostbite or worse from the subzero temperatures. I had heard plenty of horror stories of people losing fingers, limbs, and life from temperatures that sometimes reach nearly triple digits below zero when factoring in the wind-chill. After the brief we were off to K2 Aviation where we loaded up in small planes that would land us on the glacier. The wait to board the plane and take off wasn’t very long, but I found myself feeling extremely anxious. I had been intimidated by Denali for years. At this point I was ready to stop guessing and imaging the challenges of the mountain and to start facing them. 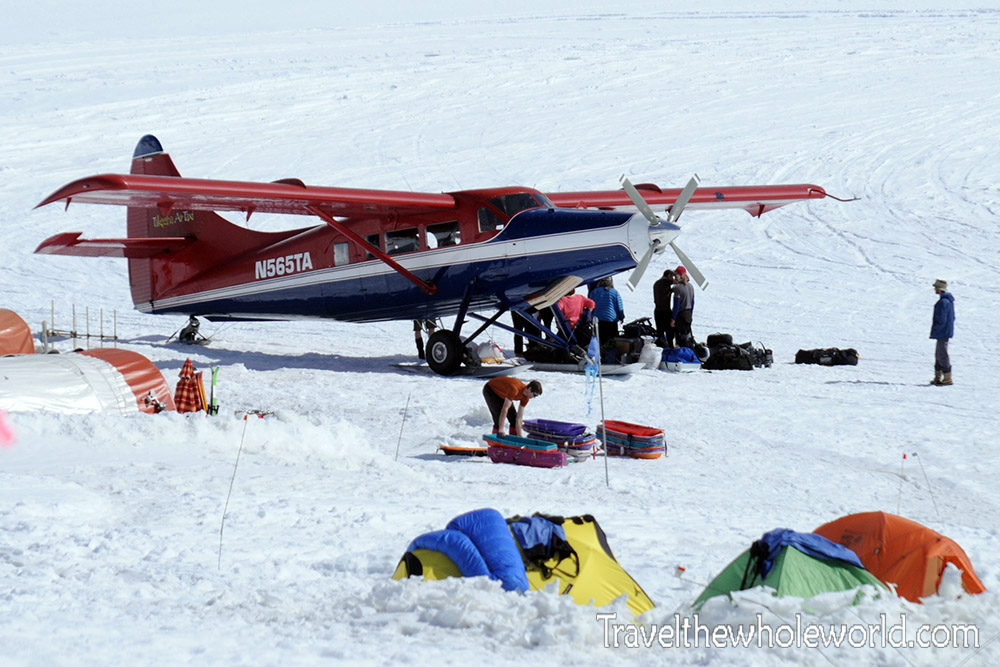 The flight from Talkeetna passed by some of the most beautiful mountain scenery I had ever seen. I’ve done my share of flying over mountains, but never have I seen just pure mountains of ice and rock. Once our aircraft reached a certain elevation there were no more plants or animals, only white majestic mountains as far as you could see. The flight lasted 40 minutes dropping us off the Kahiltna glacier. As I reflected back on the flight, I thought that even if didn’t pass the 10,000 foot mark on Denali, the scenery and views I had just witnessed already made my expedition a success. 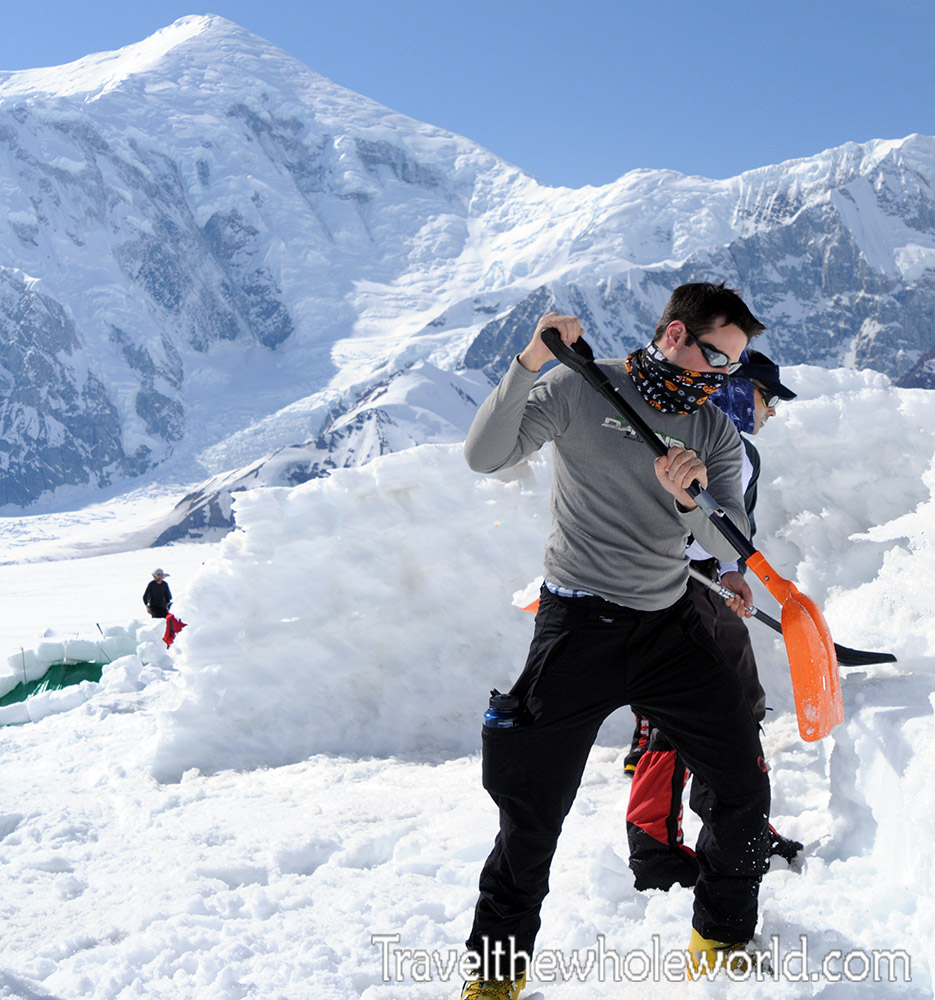 Immediately after we landed we began to unload the plane and start setting up base camp. I was reminded of a national geographic documentary I once saw where they showed how newly born honey bees begin working only 60 seconds after birth. This was the nature of Denali; only seconds after being dropped off we were already scrambling to get organized and set up camp. Fortunately our first day’s job was wasn’t high on the difficulty scale or that time consuming. We had the plane unloaded and our tents set up in reasonable time. Our plane then took off and disappeared into the sky leaving us behind to fight for our own survival. 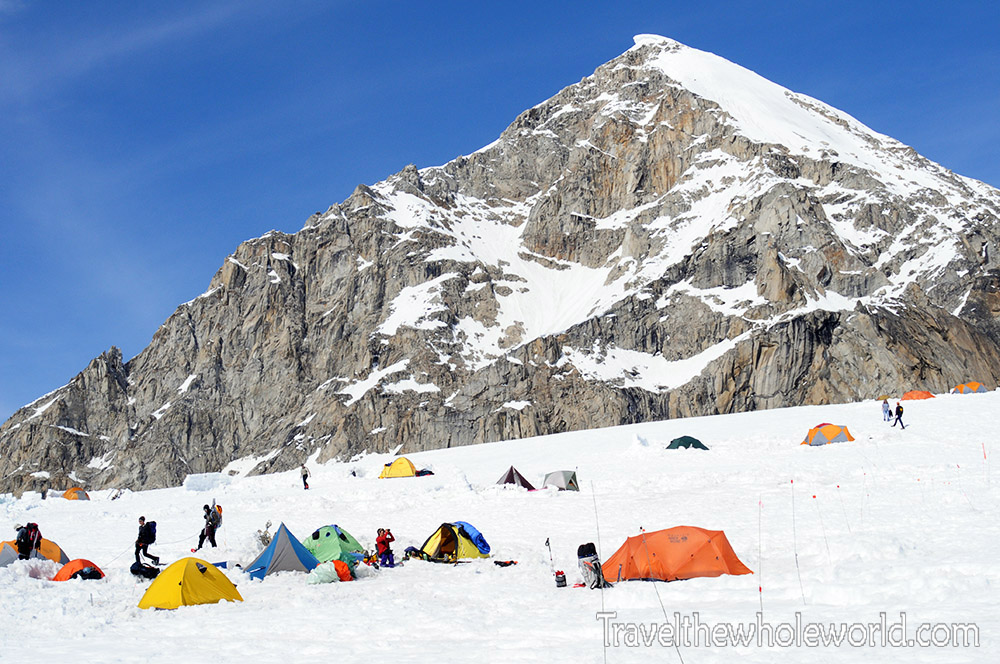 The higher the elevation the more critical it is that you fortify your camp from the elements. For Denali’s base camp, usually leveling out the snow for your tent is sufficient enough to get you through the night. This also works since most expeditions normally pack up and leave the next day. The photos above show me doing some light work on a protective ice wall and a later photo of our finished camp on the right.

While in base camp someone approached our tent asking us to participate in a survey that an organization was sponsoring. The survey was quite simple and mostly asked about our experience and expectations of our success. When asked what percent chance I believed I had of reaching the summit I circled 75% and answered yes when directly asked if I expected to summit. I realized the success rates of Denali can be less than 50% for well trained and prepared individuals. I felt somewhat optimistic and that I understood the mountain as well as it could be understood without actually being on it. I had spent over a year training in addition to an eight day prep course, and had been higher in altitude in the past. My main concern was an aborted climb due to the mountain’s stormy weather. It is said it’s not a matter of if you will run into a storm on Denali but when. 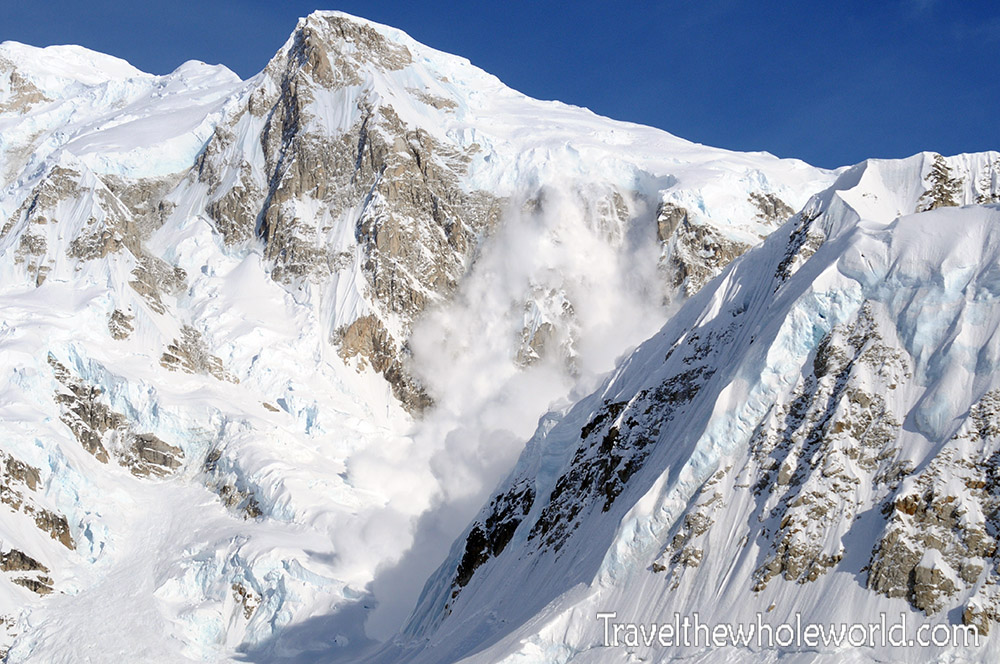 Most of my fears and concerns on Denali where focused on the dangers above 10,000 feet (3,000 meters). Only hours after being on Denali though, I got a humble reminder that anything can happen anywhere. A loud rumbling thunder like noise echoed into the valley and everyone stopped what they were doing and looked up. In the near distance we witnessed a large avalanche that was far away enough to not be a threat. The photo above shows the avalanche itself while below you can see a large cloud of snow sent vertically up an adjacent peak. 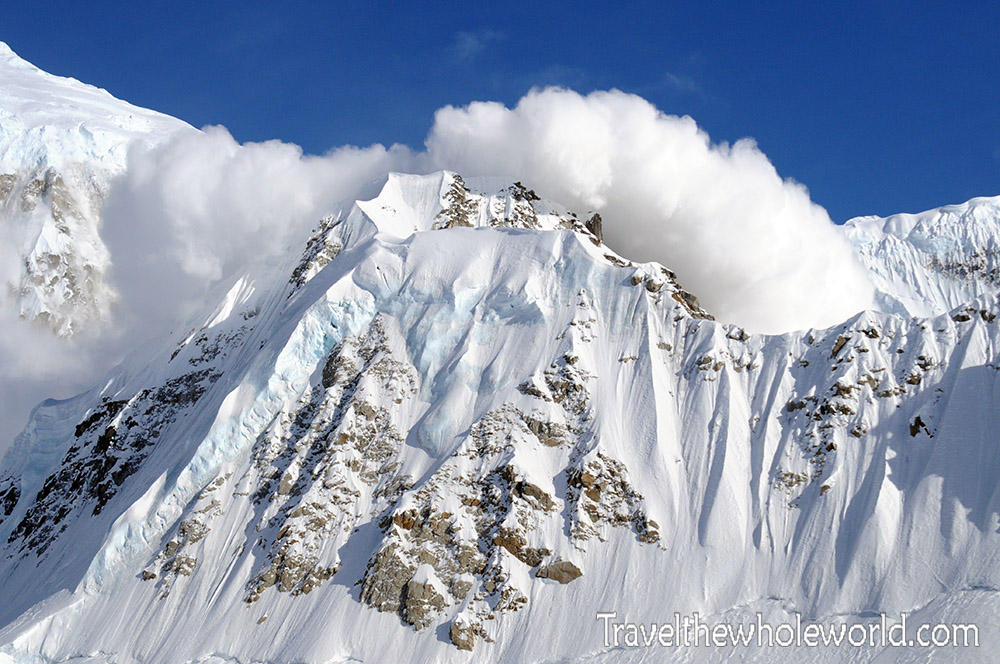 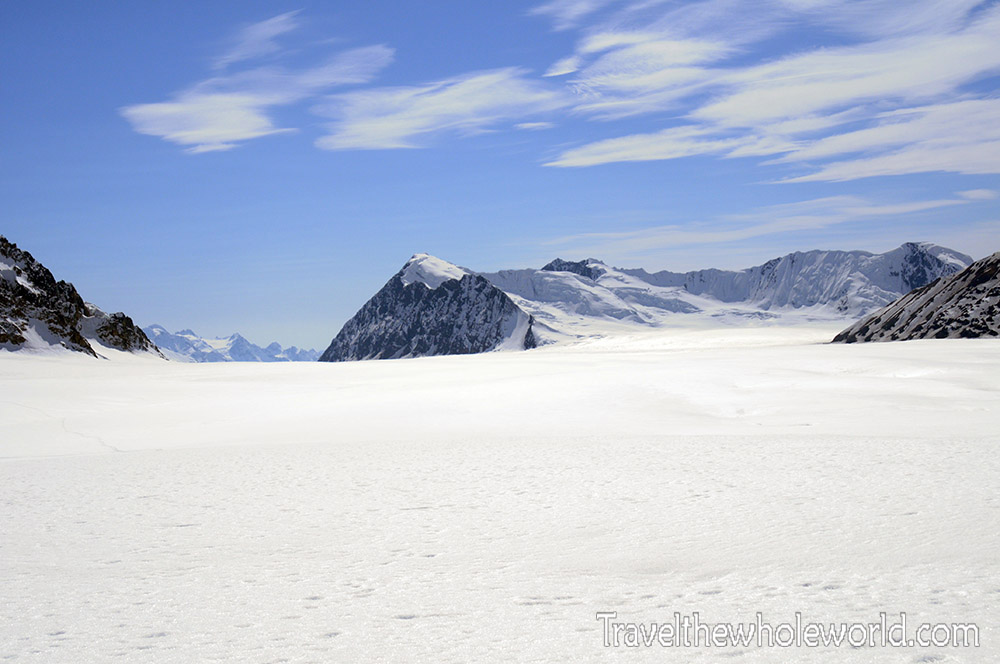 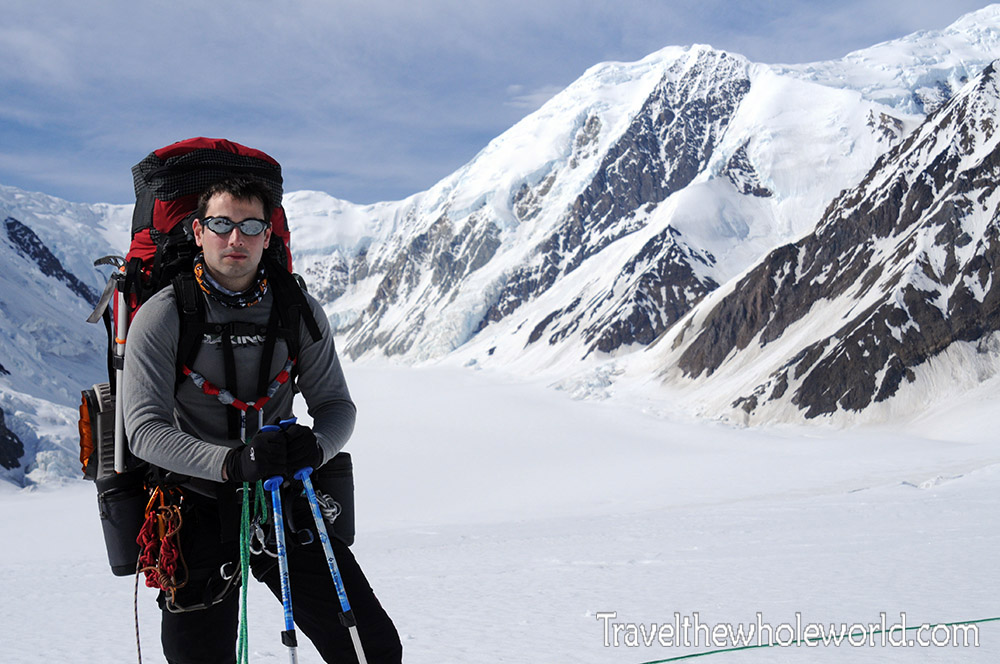 On Day 2 we packed up our tent and headed to Camp I with all our gear. Denali’s base camp is at 7,200 feet (2,200 meters). You lose 400 feet descending down heart break hill then gain another 1,000 as you head to Camp I at 7,800 (2,380 meters). The way to Camp I is long and mostly flat with gradual increases at the end. Your backpack and sled combined can weigh as much as 150lbs (70kg) and despite all my training I still found this extremely strenuous. During the month of June, the sun doesn’t really set but rather goes behind mountains for a few hours. With 24 hours of light, some groups switch to a night schedule to avoid the sun on the lower glaciers. Since we were in mid-May we left at 2pm. The sunlight reflecting off the surrounding mountains made it feel like we were in an oven. This were conditions I never expected to feel on Denali, but on my second day on I found myself hot, sweaty, and dehydrated. 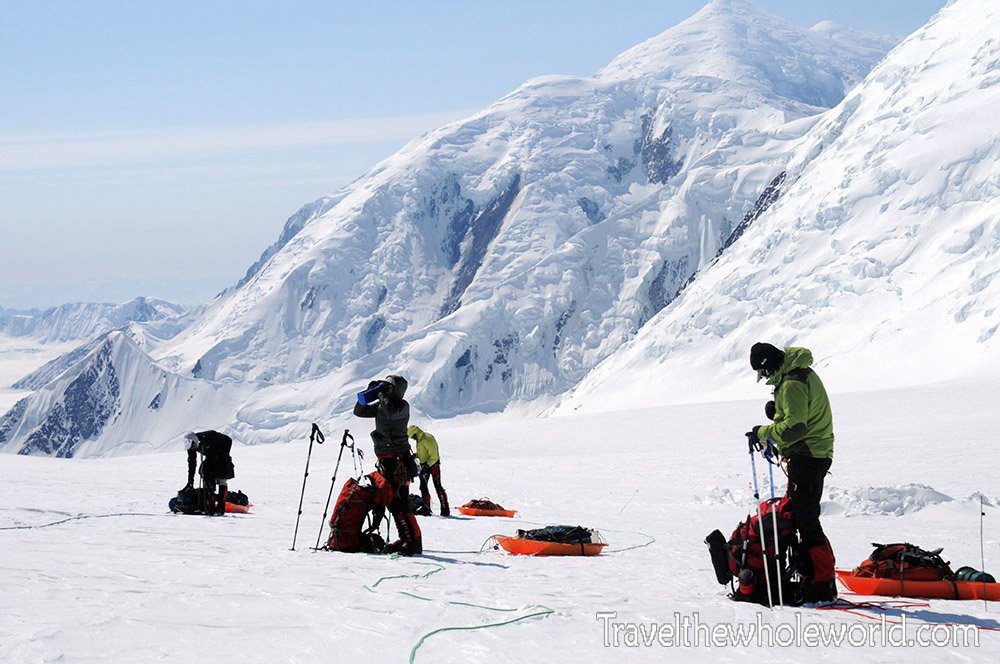 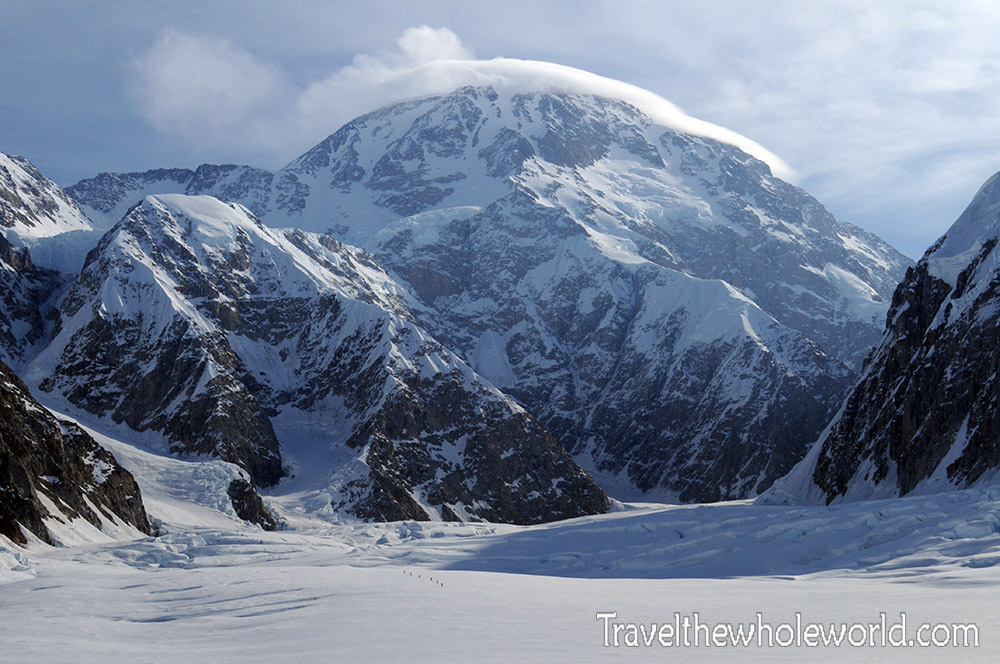 The crevasse danger here is extreme and roping up is critical. After descending heart break hill and traveling for another two hours we got a glimpse of the whole mountain and Denali’s summit. It took us about five hours total to reach Camp I with some groups taking as many as nine hours depending on the weather and snow conditions. Carrying all that gear in a single trip was one of the harder days on the mountain for sure, but would be better than carrying half the gear in two trips which some climbers do. The upper left is the group taking a break. On the right is our first real glimpse of Denali. The fast moving clouds hugging the summit indicate extreme wind conditions. The two photos below are both of me. On the lower left I’m pulling sleds and on the right taking a water break. Normally we stopped for about 10 minutes after each hour. 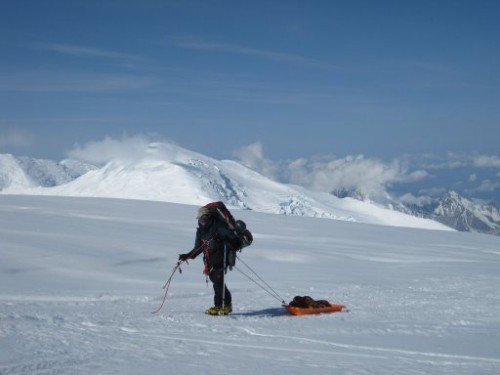 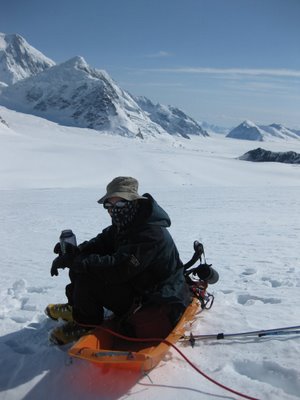 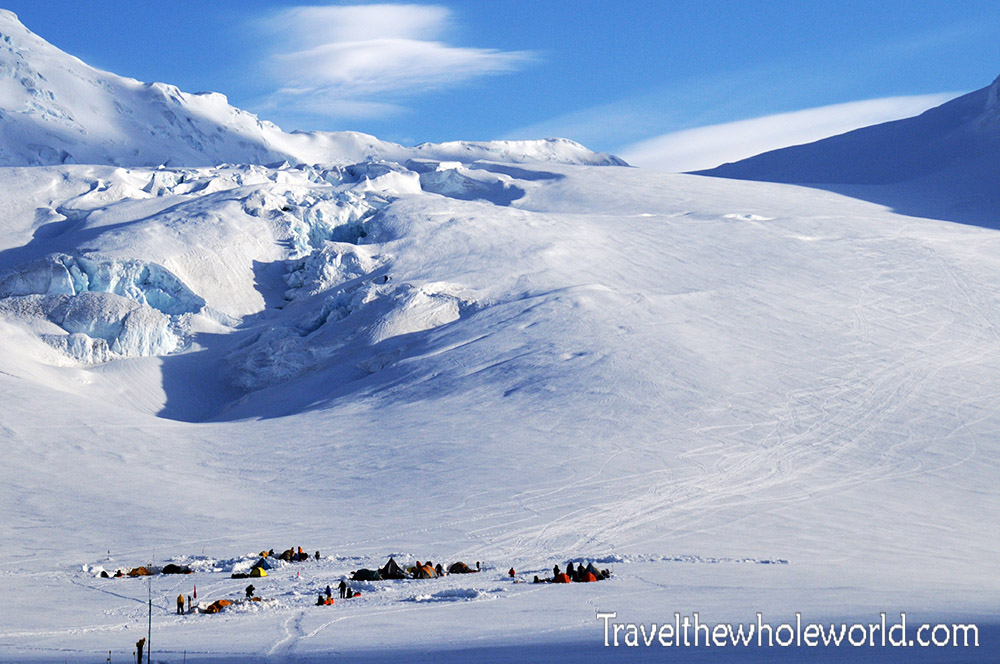 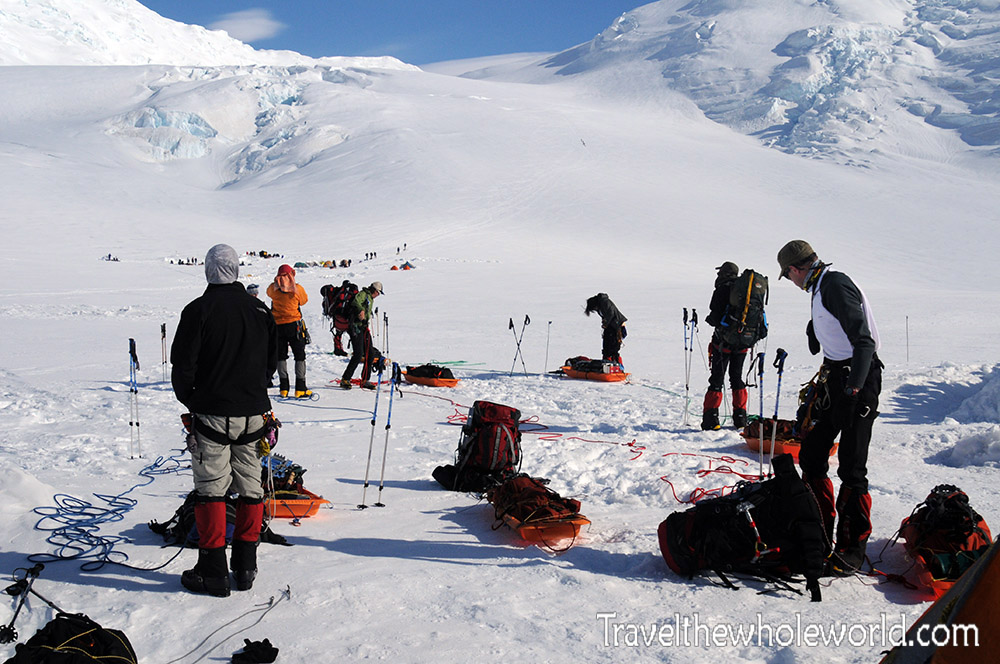 Camp I is located right below ski hill which would be our first significant incline on Denali. Despite Day 2 being very demanding there are few breaks on this mountain when the weather is good. In other words if you have good weather you’re going to have to take advantage of it regardless how hard the previous day was. On the third day we had to wake up and carry half our gear to 10,000 feet and cache it there. On the upper left is Camp I, on the right is the group getting ready to carry to 10,000 feet. The lower left is the cache which has to be buried at least one meter deep. With the gear dropped off we tied our empty sleds to our packs and casually walked back down to camp. 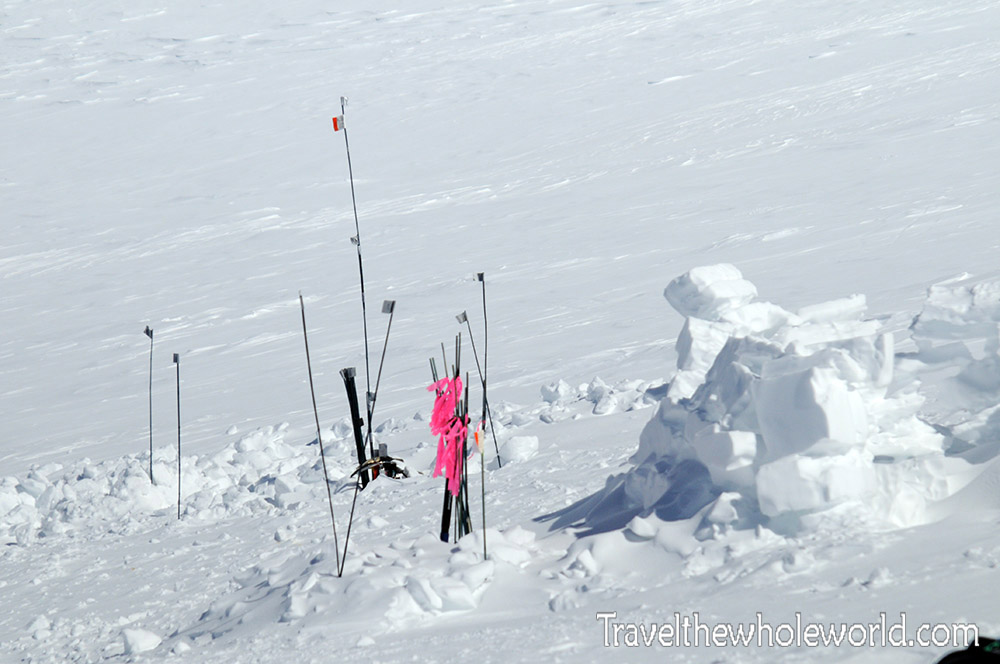 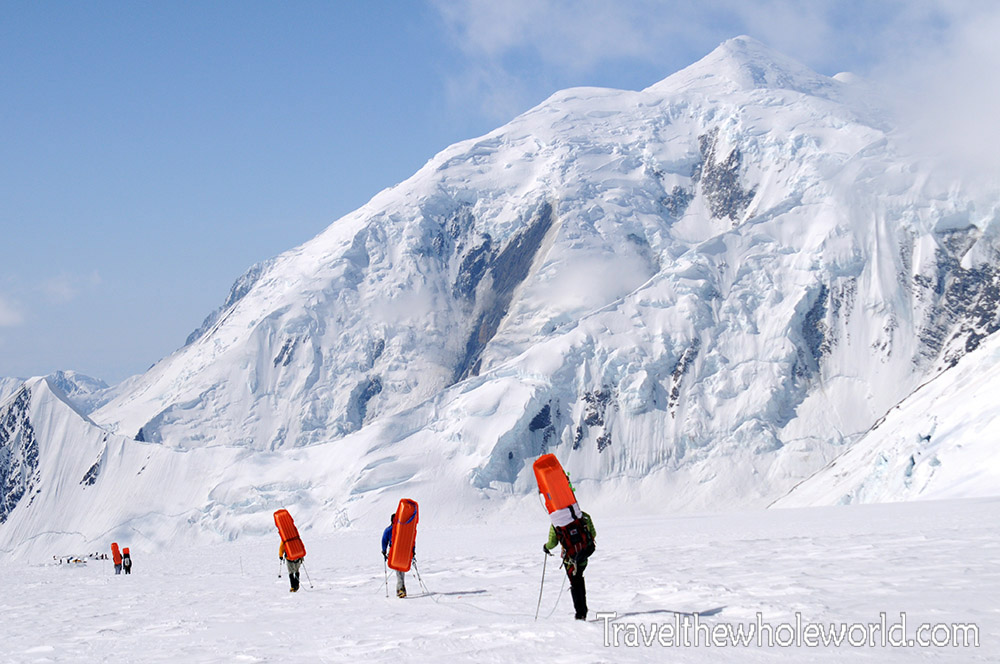 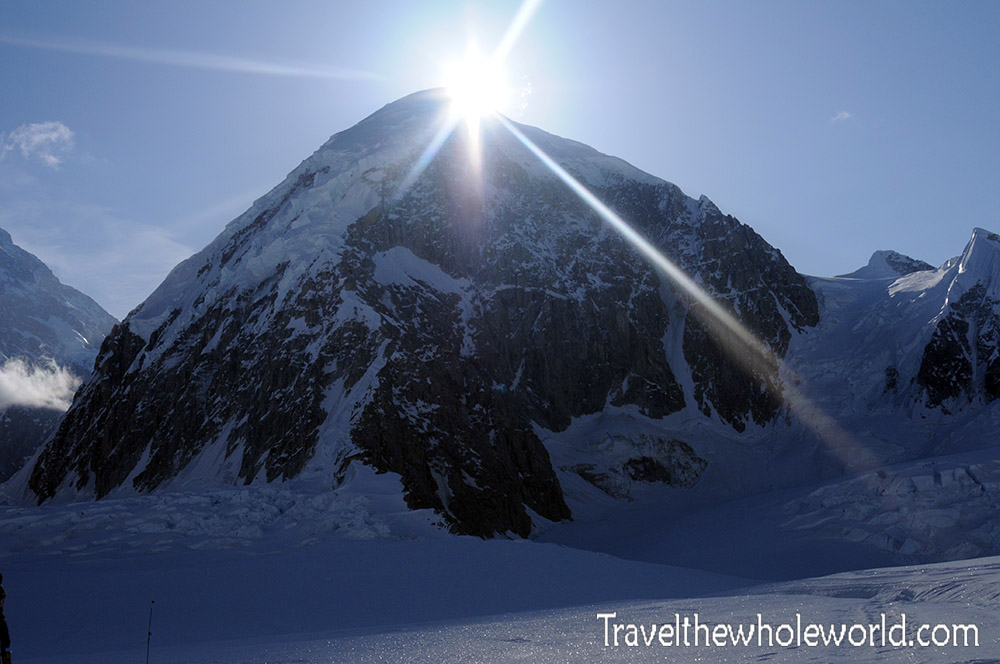 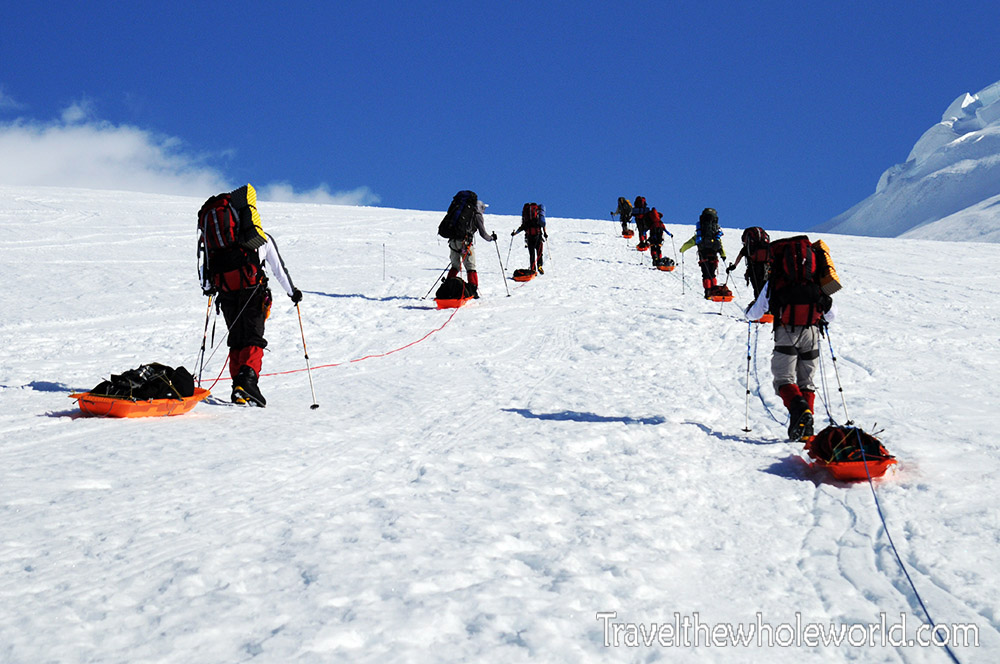 At this point things seemed to be moving fast on Denali. We were always busy and there wasn’t much time to sit around. Before I knew it Day 4 had arrived and it was time to pack up and move to Camp II. On the left is the sun coming out making a significant temperature change in the day. The right photo shows my team moving up ski hill as we head to Camp II. 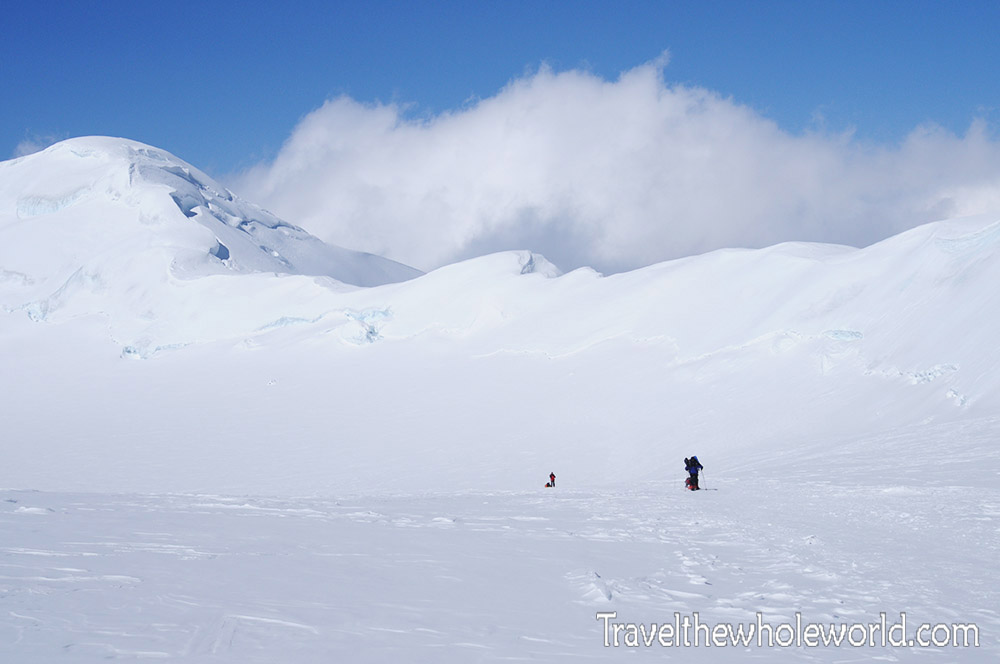 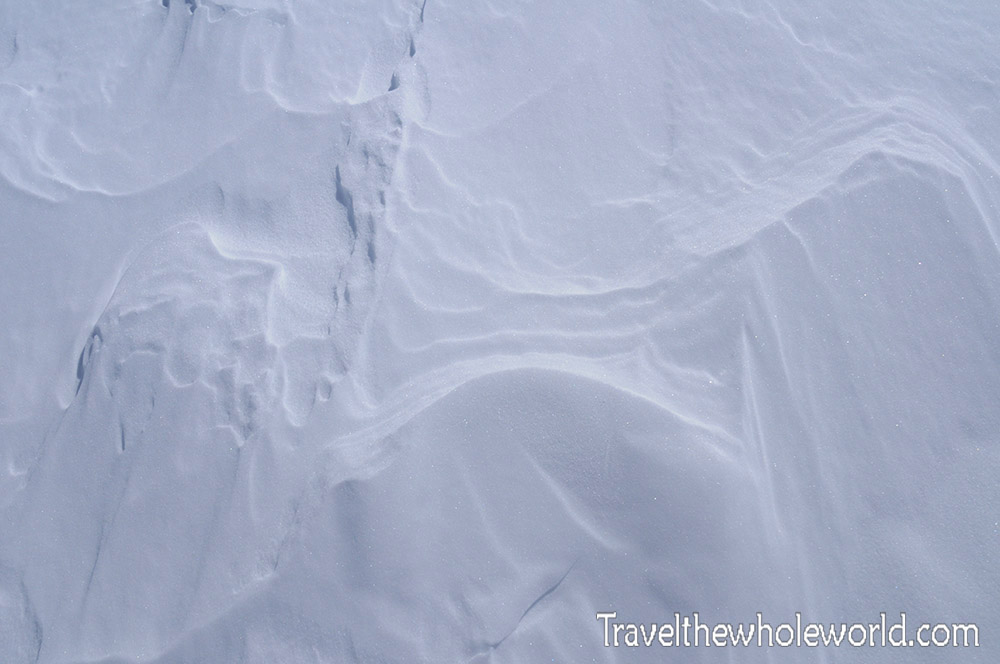 On the left is Kahiltna pass at 10,000 feet. The previous day we had put our cache just above this location. Since we were carrying half our load at the time, around 65lbs now, we ignored the cache and continued to Camp II. Doing a single load carry of over 100lbs at 10,000 feet would be extremely slow and difficult, and would take up most of the day. Plus, the higher you are the more difficult it is for your body to recover. 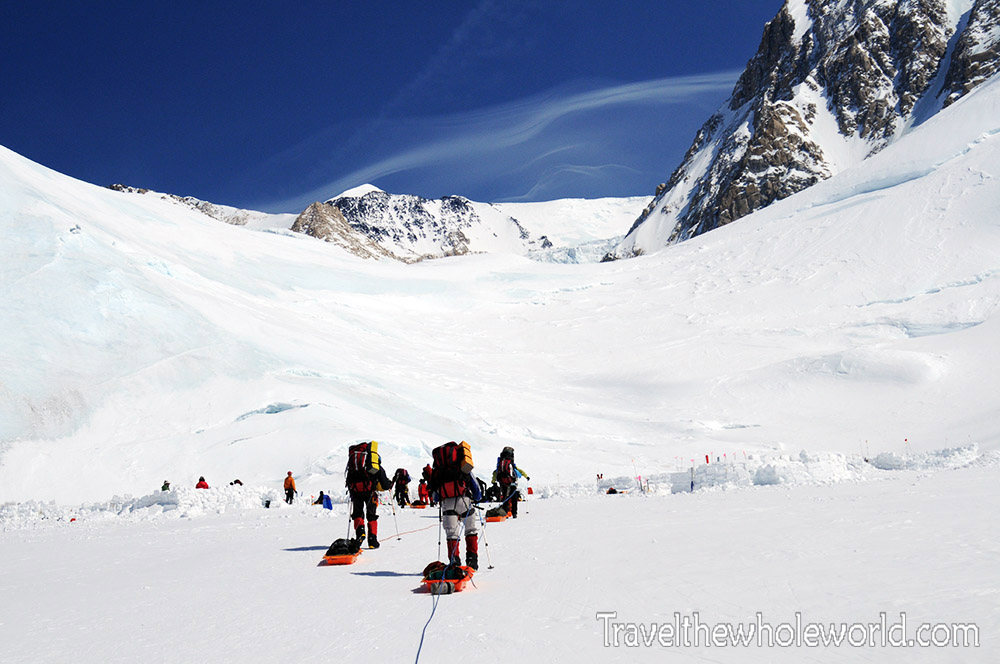 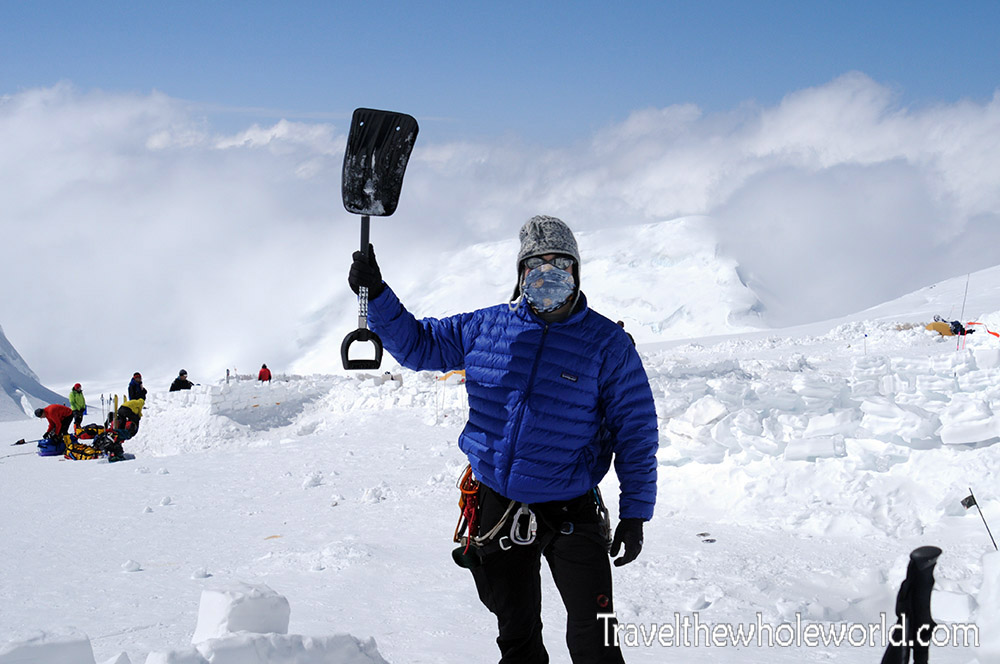 After a long day we reached Camp II at 11,200 feet and dropped our packs and sleds. With every mountain I’ve done before, at this point the day would be over. Not on Denali though, grab a shovel and snow saw and spend a couple hours fortifying your camp. 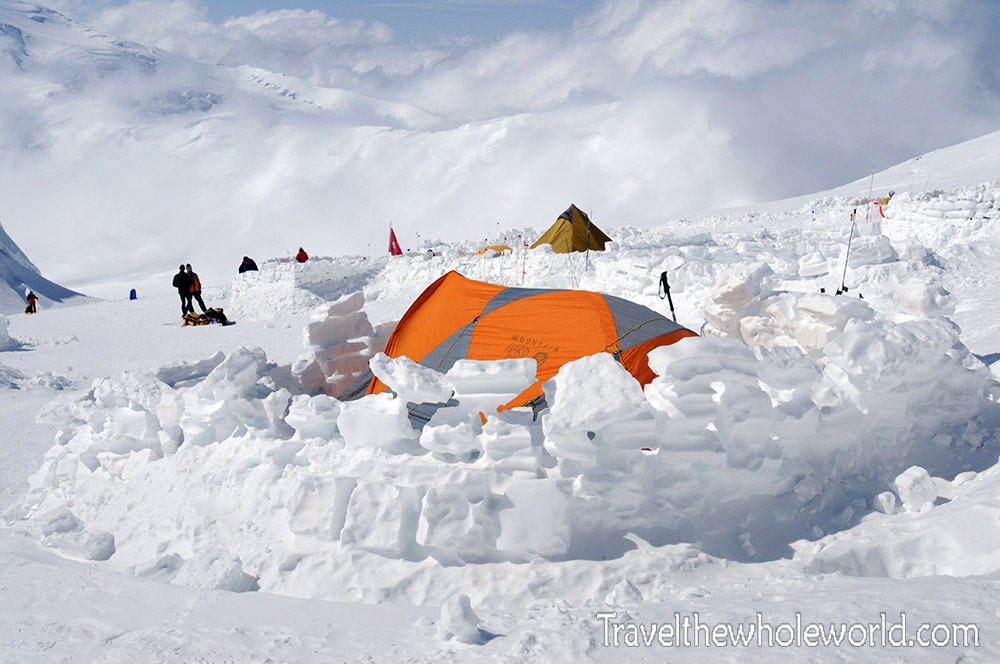 We had three nights at Camp II before we had to head off to Advanced Base Camp. It was nice to be able to have a full days in camp and not take everything down after a single night. On Day 5 we went down to 10,500 feet and picked up our cache and carried it back to Camp II. Day 6 we did a cache carry to 13,500 feet (4,100 meters) and dropped off 65 lbs of food and gear there. 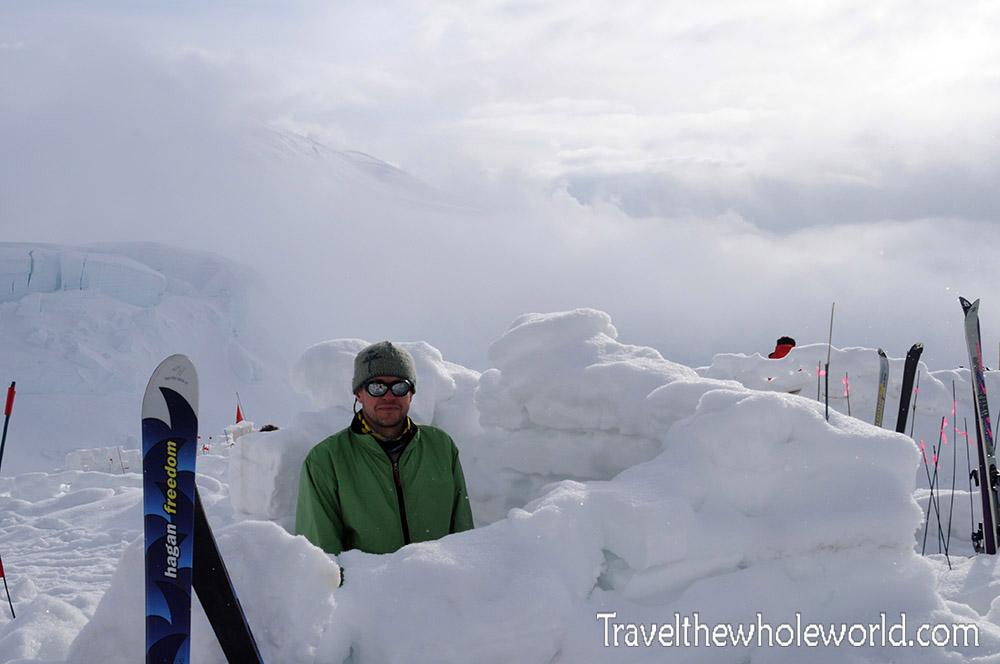 The cache carry days were of course a challenge, but nothing too demanding. The first day of leaving Base Camp with all our gear was much much harder than what we were doing now; carrying only half a load at a time. Plus the distance wasn’t nearly as long either so the days were shorter. Since we had three nights in Camp II, we took the time to build a small latrine photographed above. Below is the inside of my tent, with gear set up to dry.

Below on the left is our bathroom. On the right is the inside of my tent, with gear set up to dry. My friend in the photo above was actually my climbing partner on Denali. He was a great guy and a very cautious person. Later on Denali when he had potential altitude problems he took no chances and immediately descended. Sadly two years later he died on another trip while ice climbing. 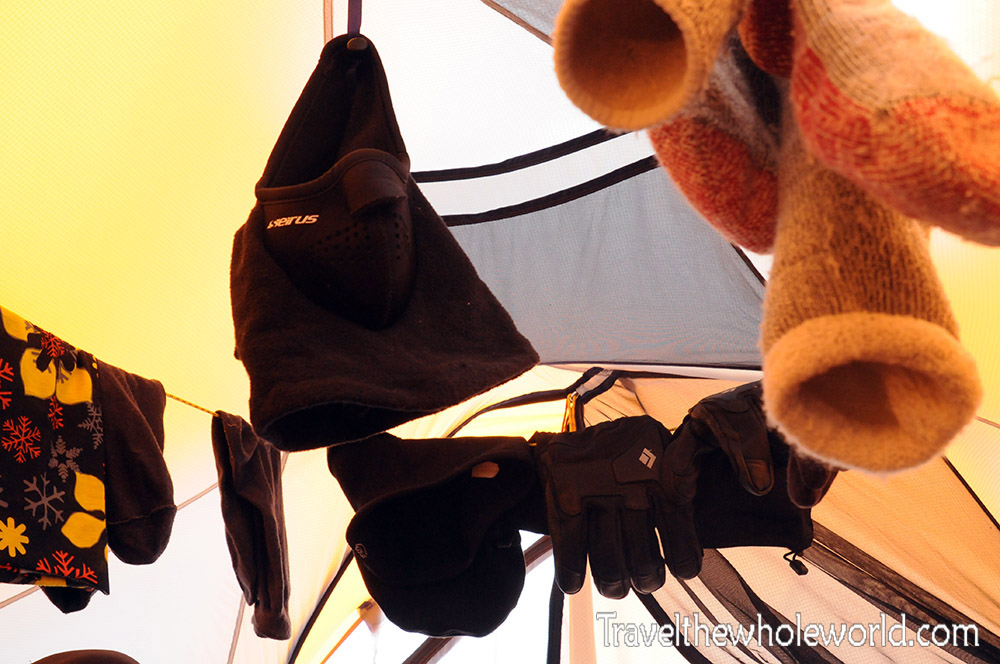 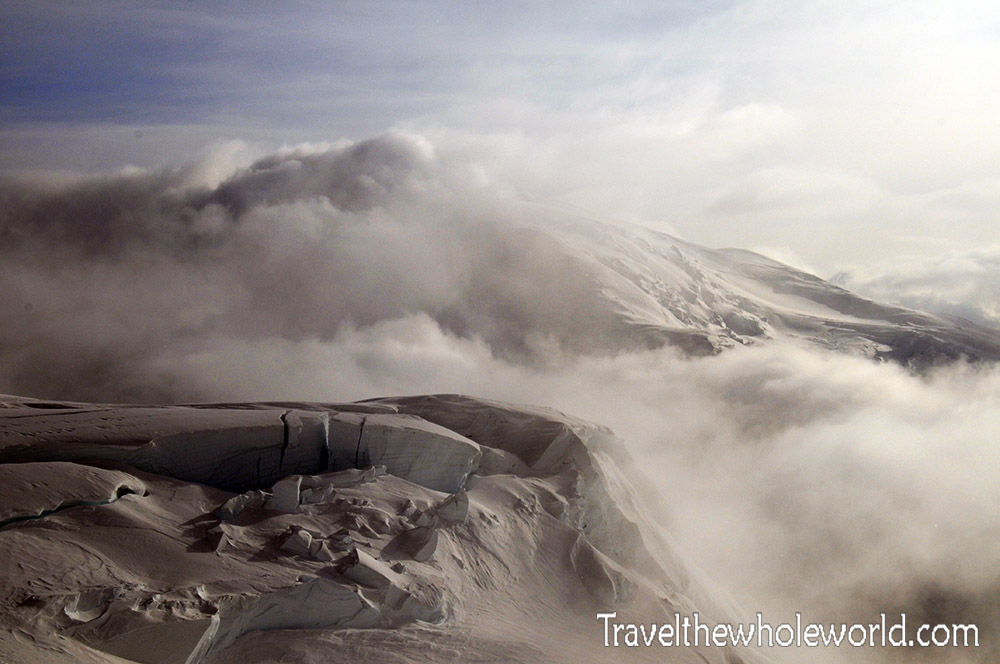 My friend and I talked about how beautiful the mountain was and how amazing some of the views were starting to get now that we were above 11,000 feet (3,350 meters). I remember while climbing below that massive glacier above I was worried it might collapse. I felt as if we were climbing up a giant icy slide with a building sized chunk of ice protruding over us ready to snap off. A few years after my climb I read about several Japanese climbers being killed by an avalanche at this same altitude. I’ll never know for sure, but I feel that giant piece of ice that once gave me the chills finally gave way and slid down the mountain killing several climbers. When on a mountain this big, many things are simply beyond your control.

The Climb Continues! From the Low Camps to Advanced Base Camp