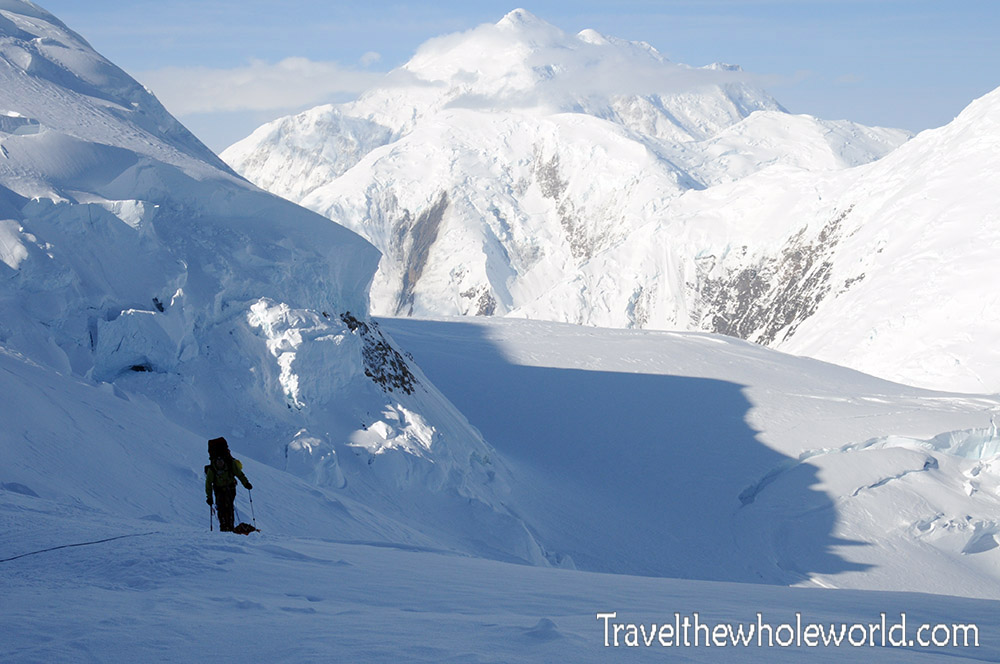 Day 7! After a week it was time to move to Camp III at 14,200 feet (4,330 meters). Camp III is also known as Advanced Base Camp or simply ABC. Denali’s Advanced Base Camp is where you’re likely to spend most of your time on the mountain. Our first challenge out of Camp II was Motorcycle Hill. This is a 600 foot (180 meter) hill and is the steepest part of the mountain while you are pulling sleds. The angle is steep enough to where you have to duck walk in order to properly climb it. Earlier on this trip on steep terrain I stepped with the front of my foot first which put all the weight I was carrying into my calves. I woke up extremely sore the next day and was worried I wouldn’t be able to continue the climb. Duck walking places the stress evenly on your leg muscles so it’s a much more efficient way to climb. 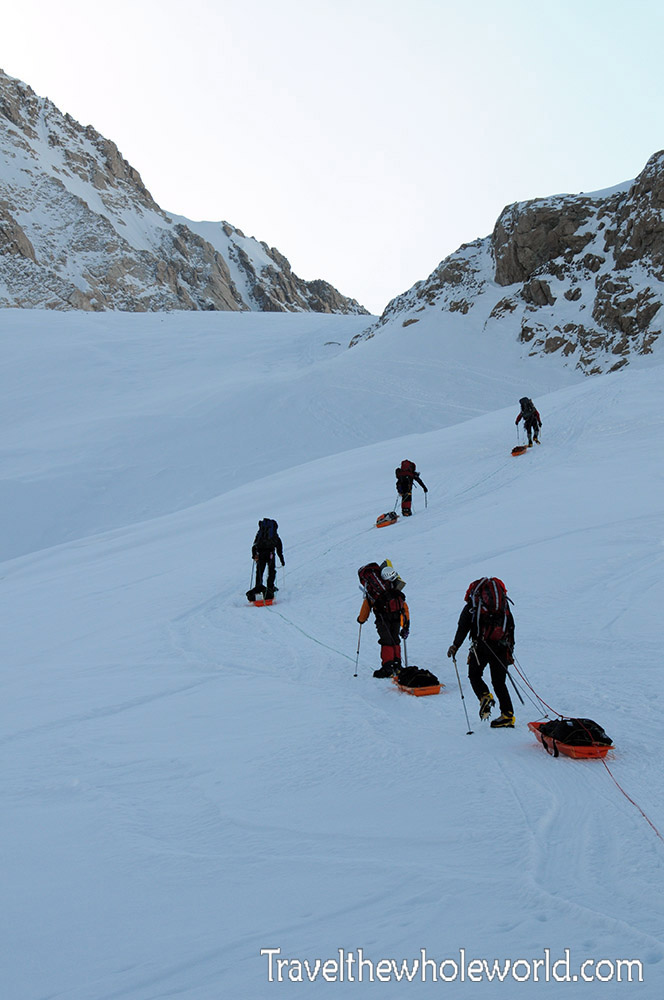 After climbing Motorcycle Hill you immediately approach Squirrel Hill. This hill is hardly a challenge in comparison and I even stopped in the middle of the climb to take a photo. After Squirrel Hill it gets even easier; the gentle Polo Field photographed below. The Polo Field feels like a good break after two hills in a row! 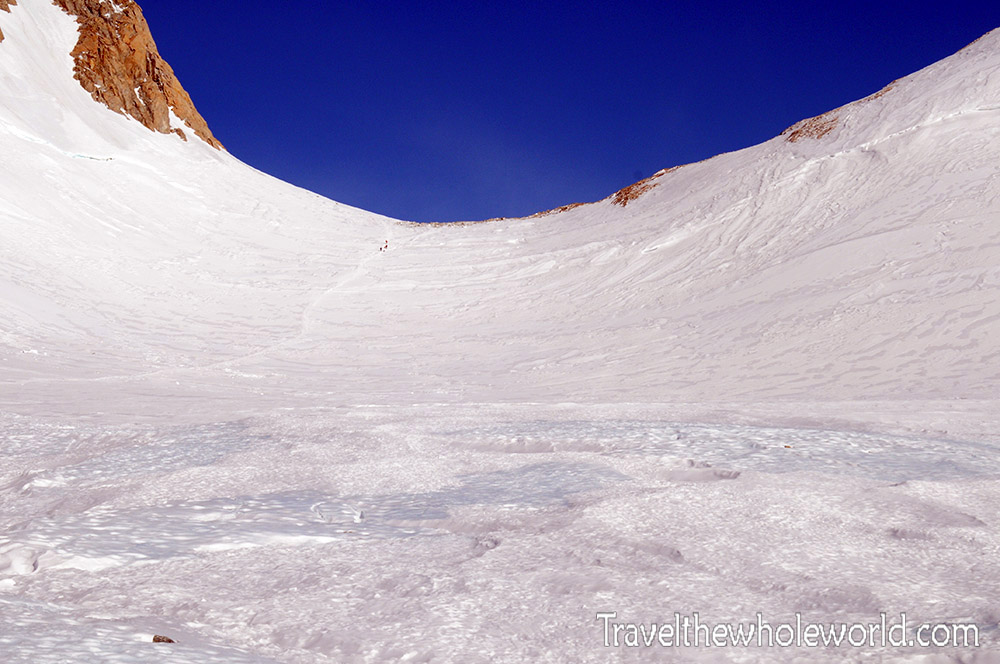 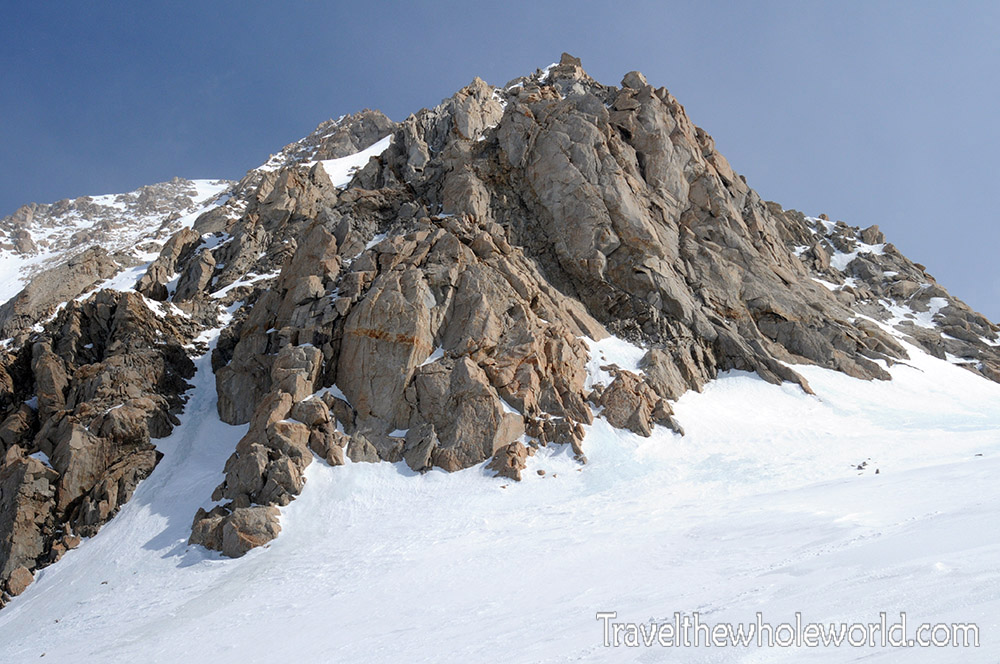 We took a short rest when we first got to the Polo Field. After our break we crossed the field and then entered one of the most dangerous parts of the mountain, Windy Corner! Extreme winds rush past these high rock formations and make it a dangerous place to spend time. Denali climbers have been killed by falling rocks and boulders and it’s best to pass by as fast as possible. Some climbers decide to wear helmets in this area, but of course any large boulder will make any helmet useless. 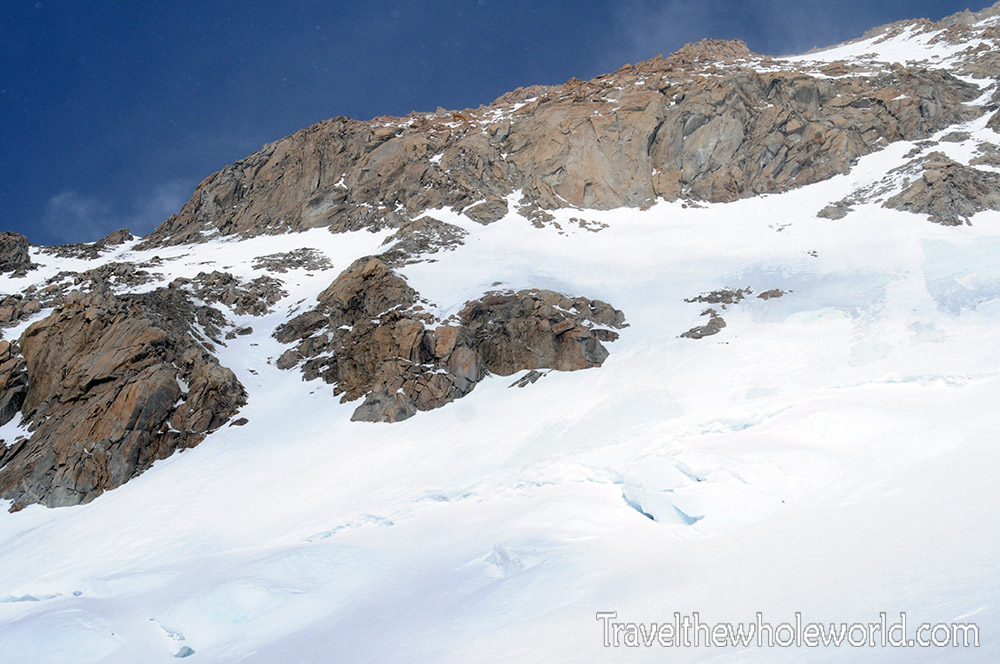 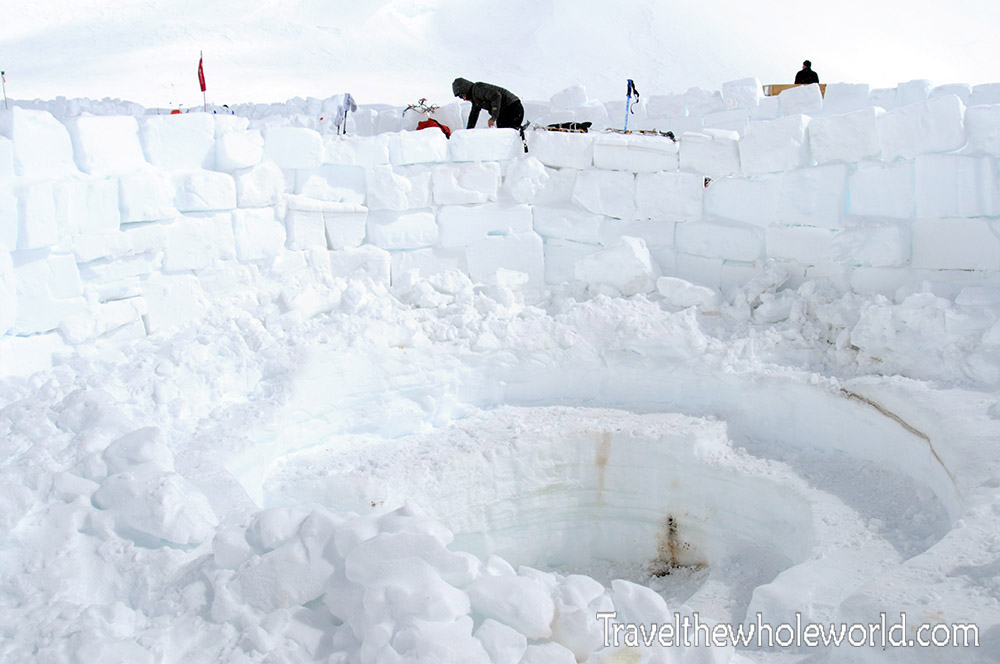 So far for the entire Denali trip I had felt completely strong. For some reason when I passed windy corner I suddenly felt the high altitude and was out of breathe each step I took. I was lucky there was only an hour and a half from windy corner to camp because I was really struggling. Windy Corner lived up to its name and the made the climbing much more difficult. I felt like I barely made it to the ABC but instead of being able to relax there was work to be done. Like other camps, we had to spend time setting up tents and building ice walls. While doing the construction of our ABC, everything I did felt exhausting. Even some light digging with my ice ax. I had spent three nights at 20,000 feet (6,000 meters) on Aconcagua and felt better than I did now at 14,000 feet on Denali! My climbing partner did most of the work and ignored my pleas to let me rest a bit and then do my share. He worked like a mad man while I felt like I was hardly contributing. Above is a photo of our soon to be cook tent, while the photo below shows ice walls built around our tents. 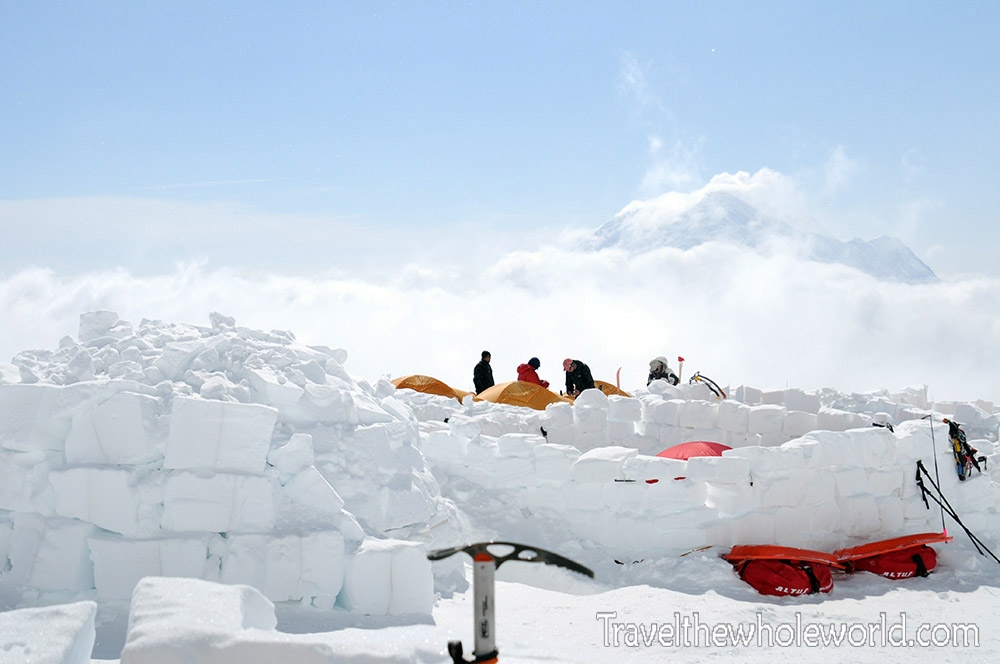 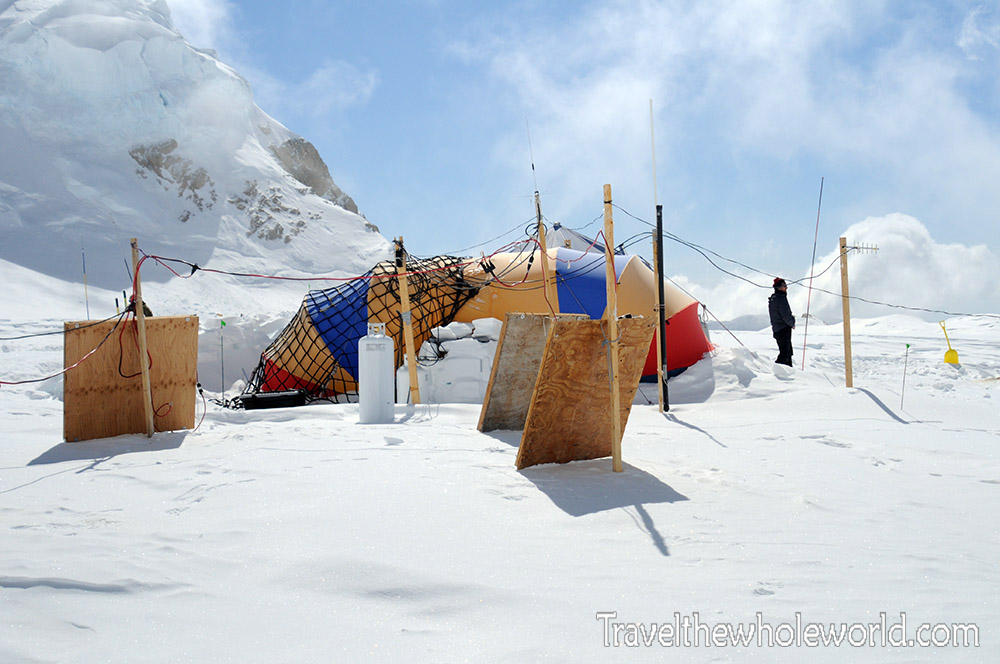 I’m not sure what had happened with me on Day 7 with the altitude, but on Day 8 when I woke up I felt great. It’s amazing how much you can acclimatize overnight! My climbing partner however felt the exact opposite. He had a major headache and felt completely out of energy. You never want to feel like this on any mountain, but this would be the better camp to be in if it has to happen. Since people anticipate spending a lot of time in the ABC, Camp III is a relatively nicer place with better infrastructure. More effort is put into the tents and ice walls since it’s possible to spend over ten days here. There is even a ranger station that broadcasts weather and can offer emergency help. The rangers will only assist in an absolute life or death situation however. If you have a cold or even a significant injury you should expect to be on your own. 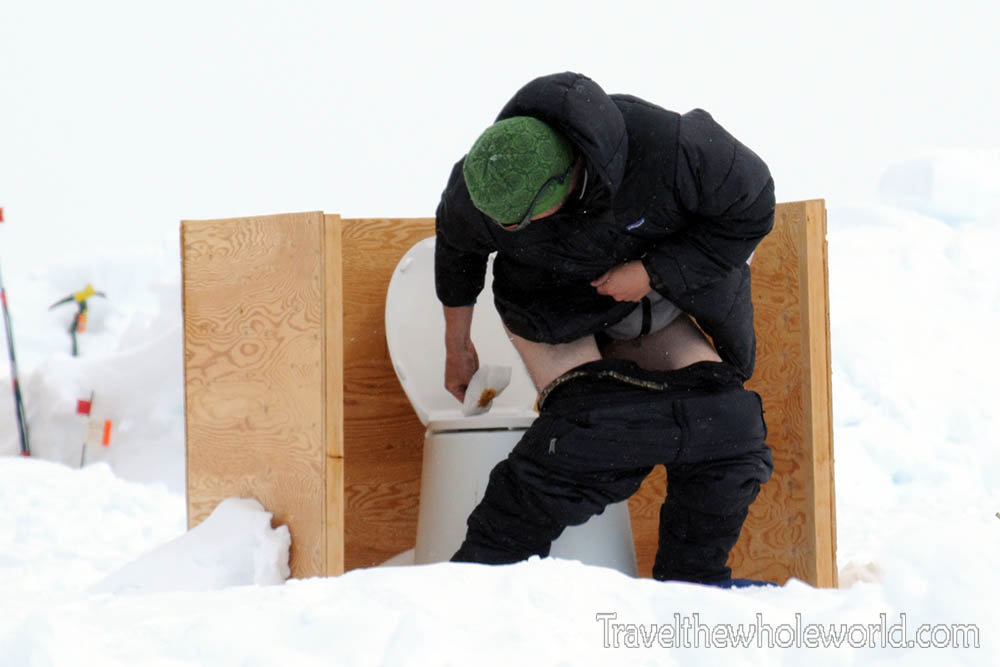 An unexpected luxury in Camp III is its several hole in the snow toilets and even a throne toilet. For some odd reason the throne toilet was built directly in the center of camp so it offers absolutely no privacy. I’m not exaggerating when I say that someone will be using the toilet and an entire rope team will enter camp and pass right by! 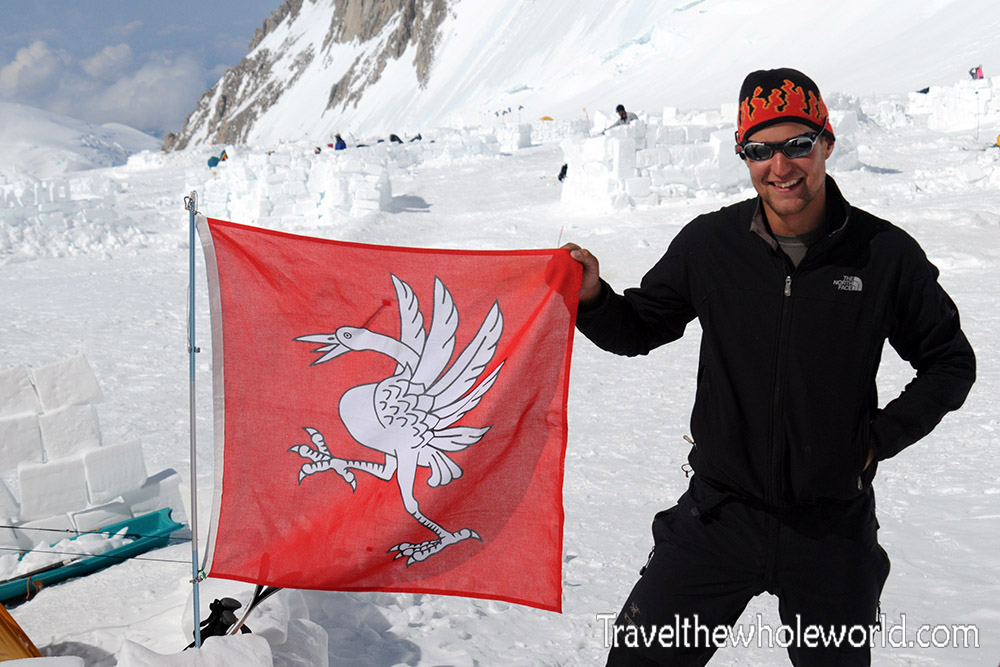 The second day in ABC was Day 8 for us, and we spent that retrieving our buried cache from windy corner. Day 9 was supposed to be a rest day, but our guide was feeling incredibly motivated and decided to do a cache carry further up the mountain. He took three of us and we climbed up to 16,200 feet (5,000 meters) to drop off seven days of food. We left three days of food at the beginning of the West Buttress which is shown on my high camp page, and another four days all the way at the the last camp. During our brief stop at Camp IV we were only 8 hours from the summit! Finally on Day 10 we took our first true rest day and did absolutely nothing. I decided to do some walking around the ABC and took some photos. Denali is a very international mountain with people coming from different organizations, countries and even militaries from around the world. Many proudly display their flags in their camps, and one guy even went as far as to build letters out of ice! I should also mention it was during this time that my climbing partner sadly decided to return home. His condition only got worse and after a day of rest he was unable to see how many fingers we were holding right in front him. 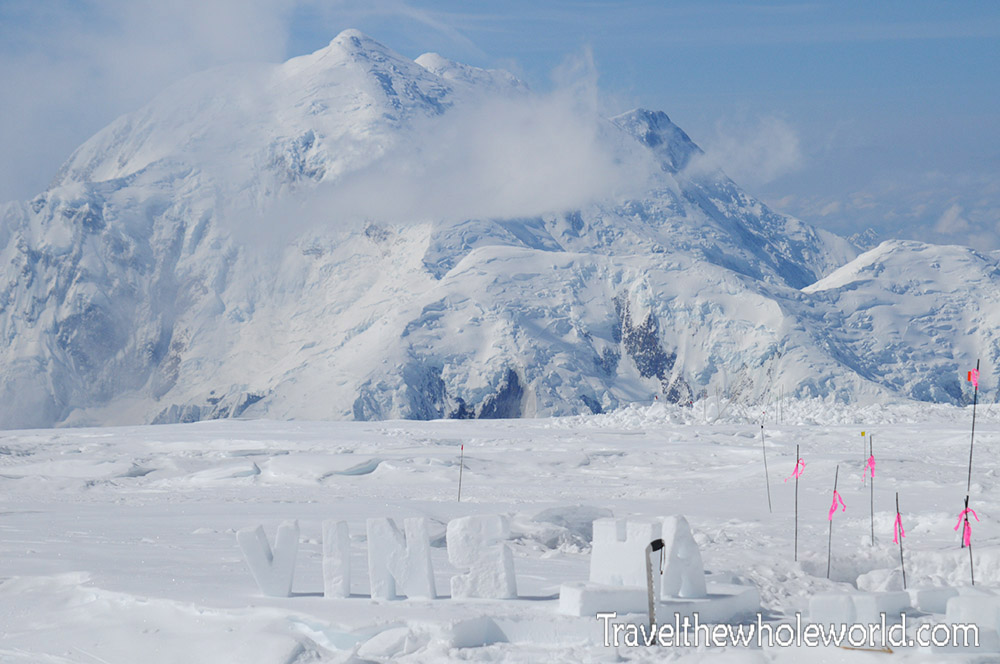 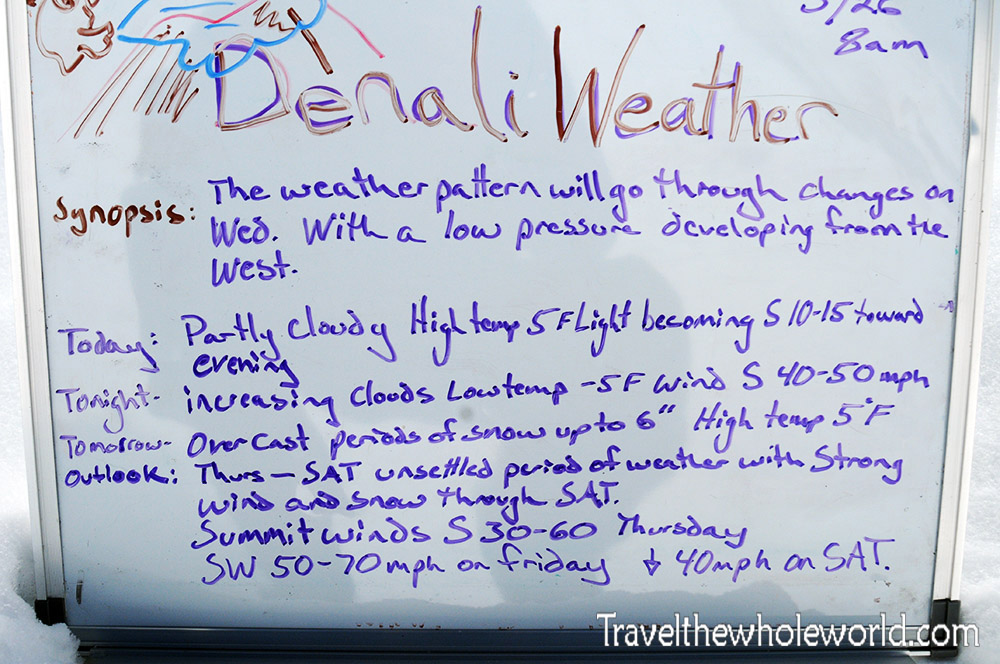 When I had stopped by Camp IV on Day 9 my confidence was soaring. I felt great at that altitude and knew I’d have no problems when we moved to Camp IV for good. We basically only had two hard days left; one move to high camp, and then to summit. The photo above is actually from Day 9 as well. The ranger station had posted the forecast showing warm temperatures but high summit winds. If it’s 5F (-15C) at 14,200 feet then it’s likely -25F (-30C) on the summit; a relatively warm day by Denali standards! The forecast of 50 to 70 mph (80 to 110 kph) winds wasn’t a good sign though. This will create summit wind chills of close to -60F (-50C) and death/frostbite is guaranteed.

I found the forecast disappointing, but wasn’t too concerned. We still had plenty of time left. We had roughly 21 days to climb the mountain, and we were only on day 10 now. Although the immediate forecast was bad I was confident that things would clear up soon enough. Some however think the sun dog above is a bad omen. 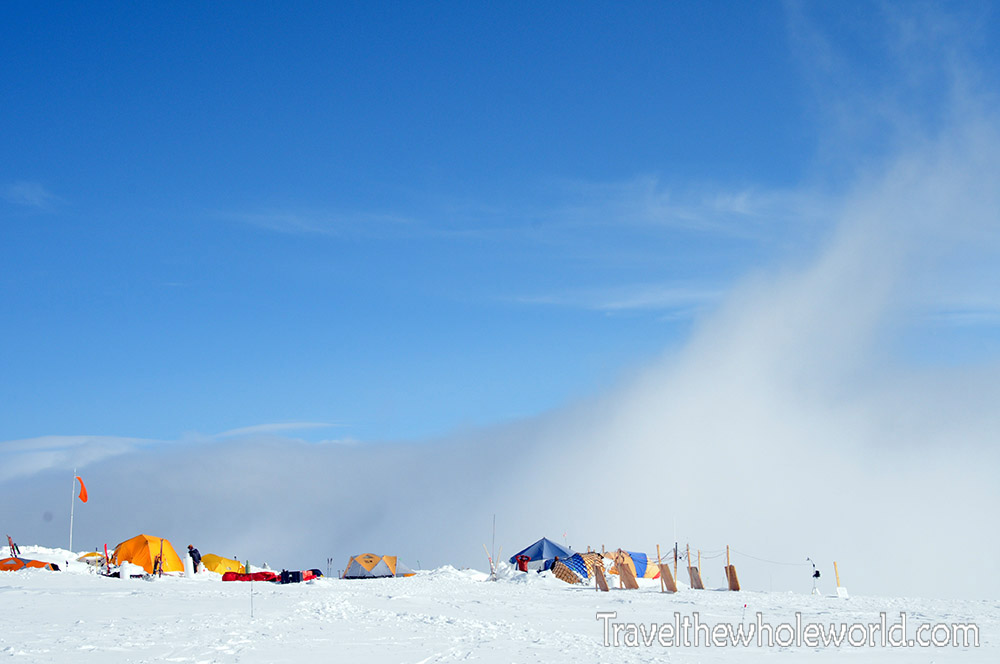 The bad weather did come in fast. At this point on Denali we hadn’t had any problems for weather so now we had to dig in and pay the price. Above you can see some high winds moving in past the ranger station. Below is ABC entering a white out. Bad weather on Day 10 wasn’t really a problem since that had been a planned rest day anyway. When day 11 and 12 came around we were forced to wait patiently in our tents for things to clear up. I discovered that 48 hours of doing absolutely nothing is torture. 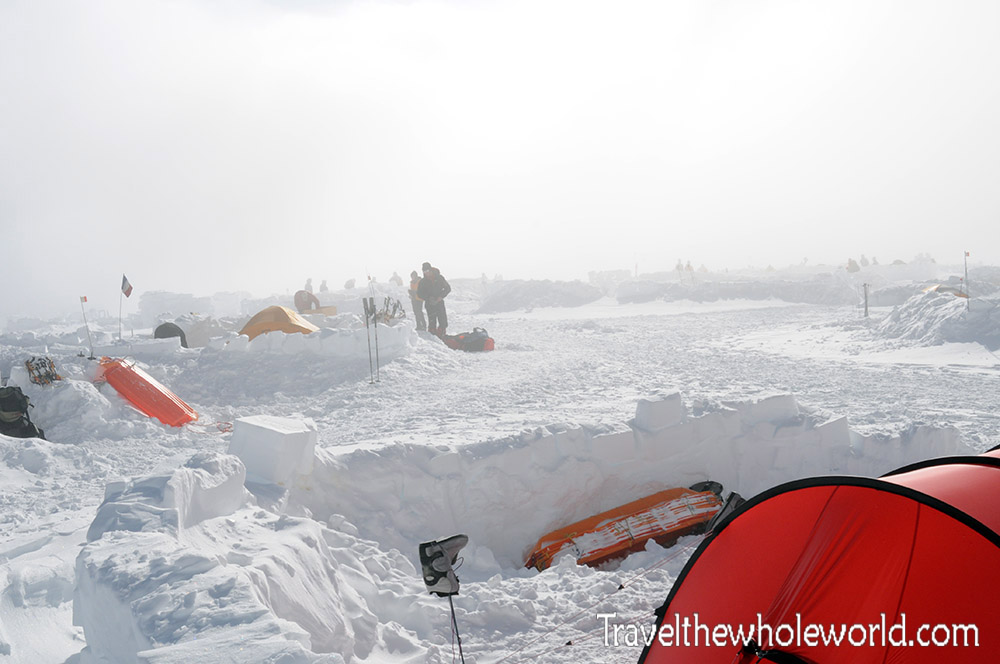 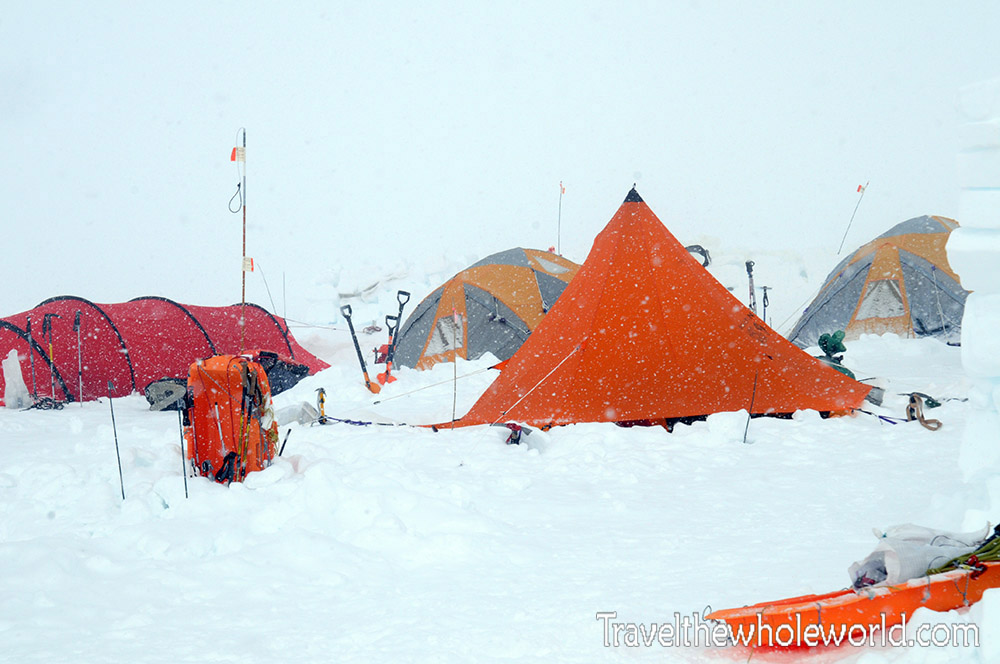 I figured bad weather could only last two or three consecutive days, but on day 13 we were still in the middle of a storm. To make matters worse, the forecast was continuing to deteriorate. For the next three days the weather was expected to bring in lower temperatures with even stronger winds. Sometimes in Camp III the weather wasn’t bad, but higher up on the mountain you could hear the strong winds passing by. We nicknamed this the express train and it seemed like it would be running for a while. 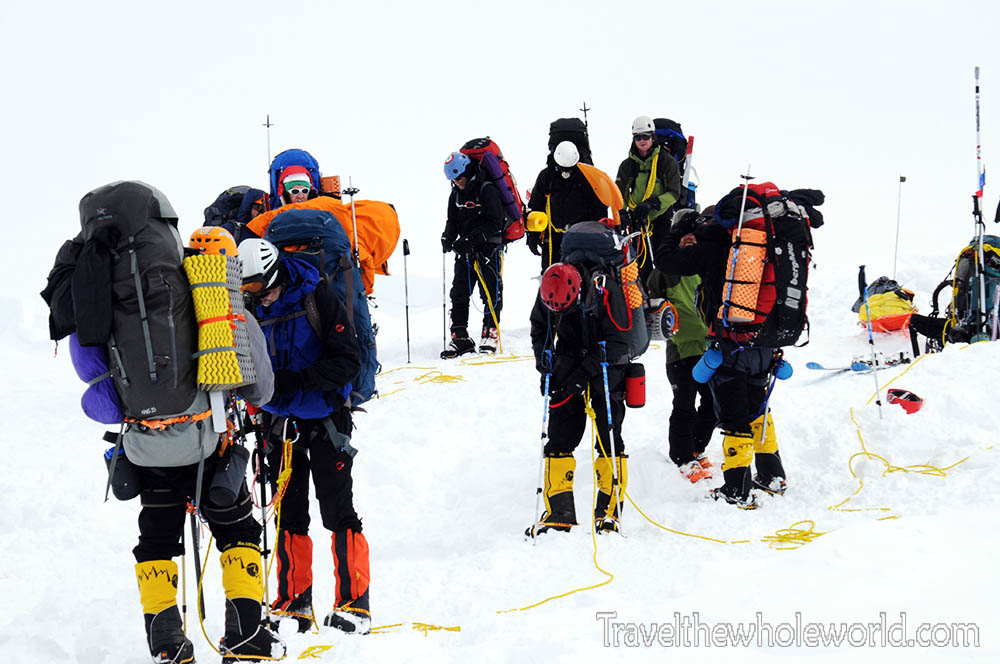 I was determined to wait out the storm as long as possible. If I had the food and vacation days I would have gladly stayed in the ABC for a full month. Not everyone shared the same thought process however. After nearly a week of bad weather some climbers decided to call it quits. The photo above shows a team ready to head back home. Although we still had a reasonable about of time left, it was around this point that I was definitely starting to worry. 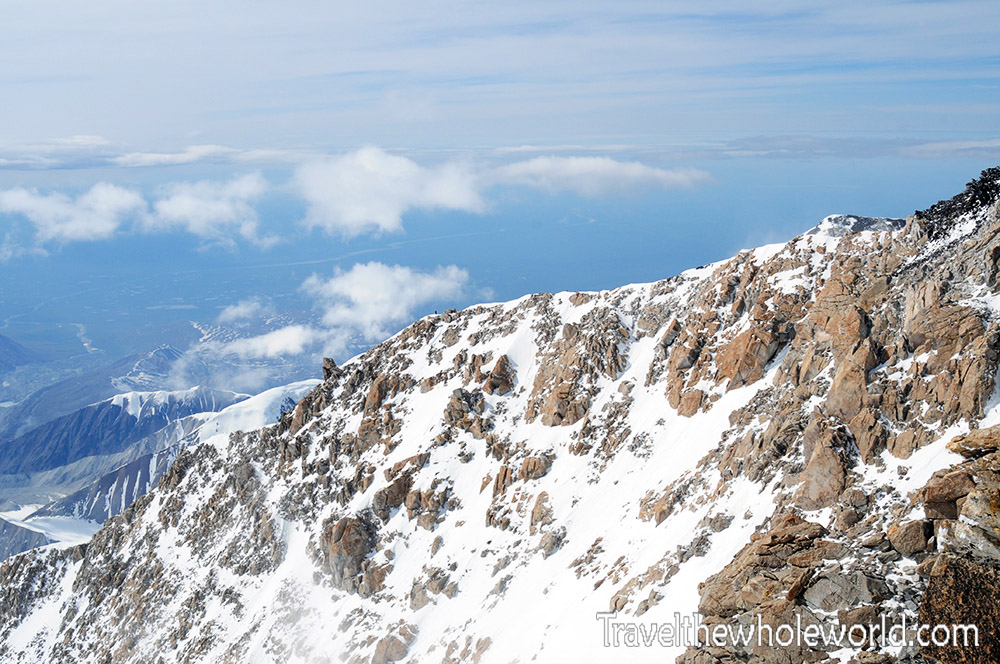 Days 14 through 16 brought strong winds higher up the mountain as forecasted. At our location the weather was still windy but nothing life threatening. I hadn’t left the immediate area of my tent in a full week by this point. In order to keep us sane and to avoid muscle deterioration we did a short hike to what is known as the end of the world. It felt good to get out and do something, and I missed the busy days from the beginning of the expedition. From the short hike we did I took this photograph above of the West Rib; an extremely challenging route to Denali’s summit. Below is a photo of myself at a famous point called Advanced Base Camp’s ‘End of the World’. 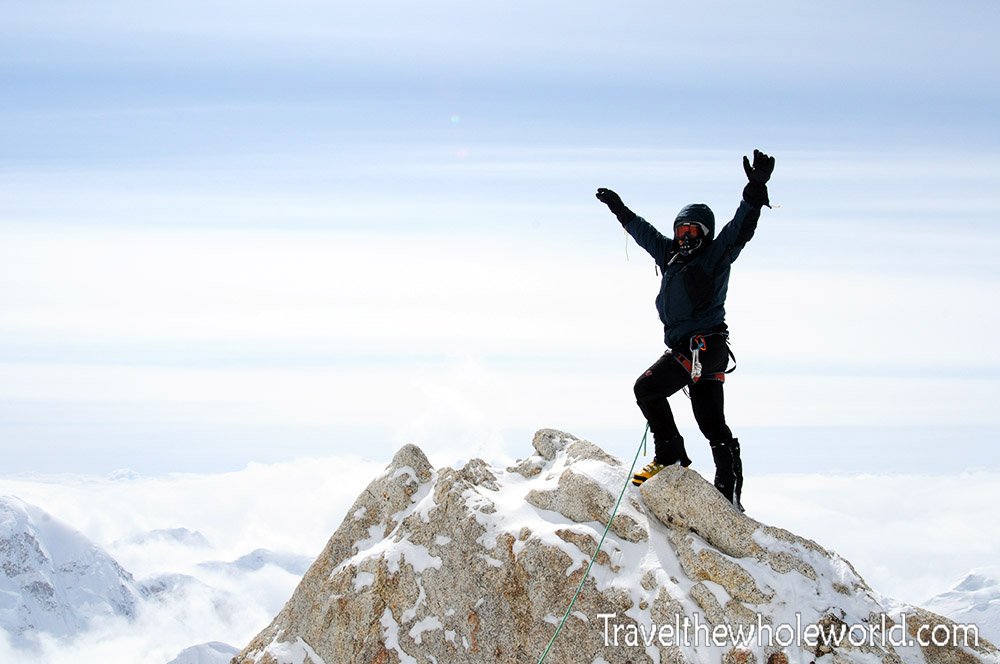 The Climb Continues! From Advanced Base Camp to High Camp