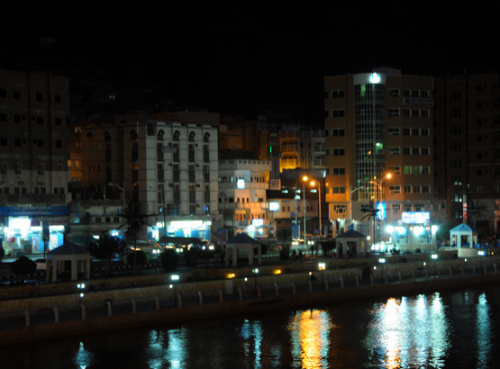 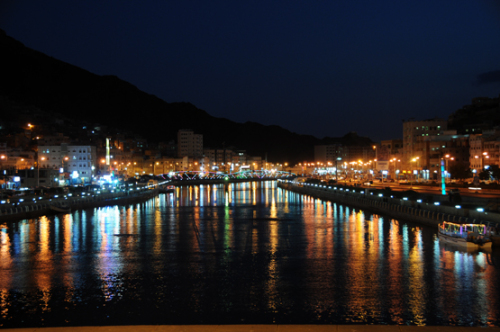 These two photos above are from the central part of Yemen, this is the costal city known as Mukalla. I’m not sure what was going on, but apparently some kind of threat had popped up in the city and I was told I couldn’t leave the hotel all of a sudden. Good thing I had taken these photos before hand. I had planned to leave my hotel and walk around this canal or waterfront, but that has to be on another visit. 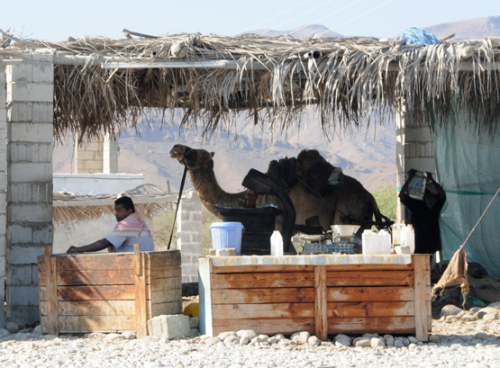 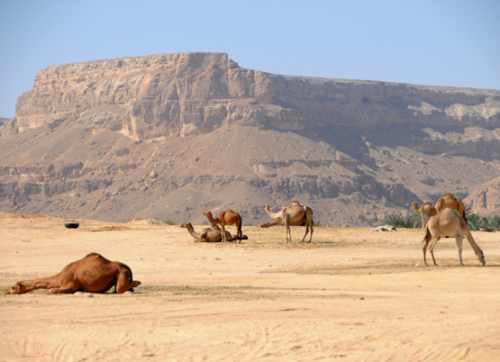 I left Mukalla the next morning to explore the surrounding region. The land here was initially boring other than the different style towns and all the camels I saw roaming around. The first photo above was from a small village where they had dozens of camels chained up. 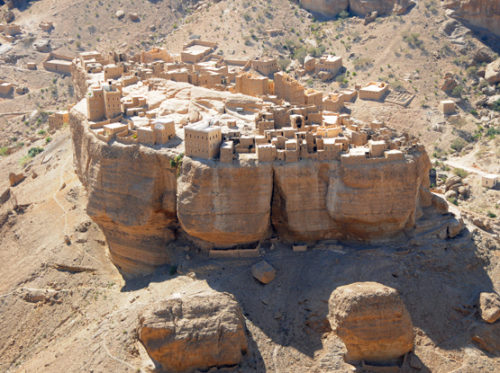 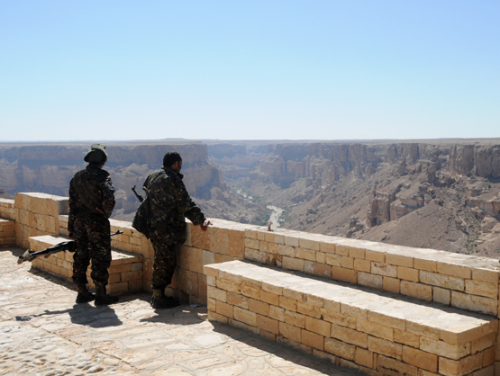 It didn’t take long for the scenery to get interesting though. I forgot to mention this part of Yemen has been known as a rough region, so I was required to have an armed escort. I figured I’d have a single guard but when I went to check out of the hotel and instead saw a tracer vehicle and seven guys with machine guns waiting for me. I don’t like the extra attention and hate the feeling of being a Westerner with an insane security detail as if I think I’m some celebrity. The guys seemed enthusiastic about the road trip though and none of them asked me for money so I was happy to bring them along. On the road heading north, we came across a large canyon that had an ancient city built on it. See the city from the left above and a close up below. On the upper right are my guards, who were even impressed with the views and used their cell phones to take pictures. On the lower right is another impressive city located farther away that we later drove to. It has some colorful painted buildings, probably the most impressive was the one I was in while I took that photo. You can see similar buildings on the left side of the photo that are painted with reds, blues and greens. My guess is that the general material is used to make any building which is the same color as the surrounding land, if you got the money for it then you can take the extra step of painting it white, and if you want to go all out add colors. 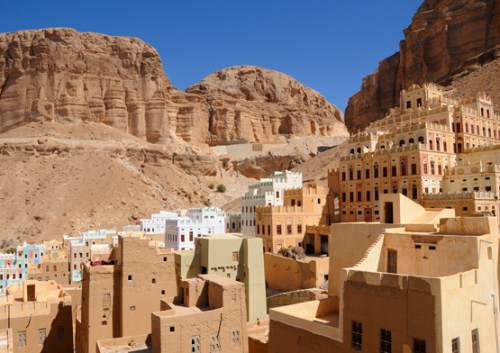 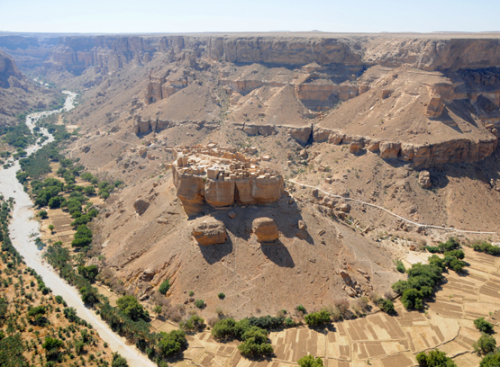 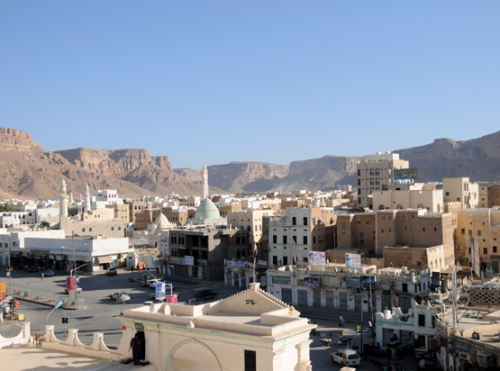 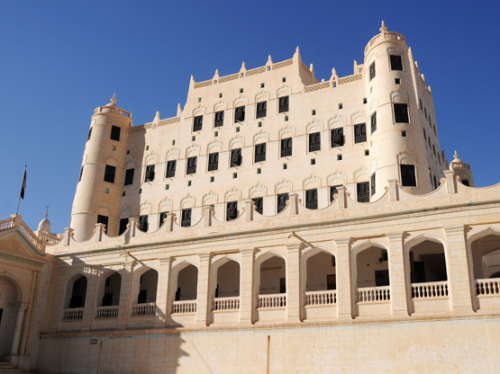 After the coastal city of Mukalla, the next important city in this region is Seiyun. Located almost dead center of the entire country, Seiyun’s main attraction is the Sultan Al Kathiri Palace palace seen in the upper right. Built in the 1920s, it’s the city’s biggest landmark and was built up from a small fort to over 90 rooms and a total height of 35 meters. There is a large museum inside, but it was closed for two days when I was here.

One of the most amazing places in Yemen to me was Shibam Al adhramaut, located just outside of Seiyun. These buildings above are often called the world’s first skyscrapers, or the Manhattan of the desert. First created over 1,700 years ago, and these structures stand anywhere from 5 to 11 stories high. Above is a panoramic view of Shibam with a close up on the lower left and the main entrance below. 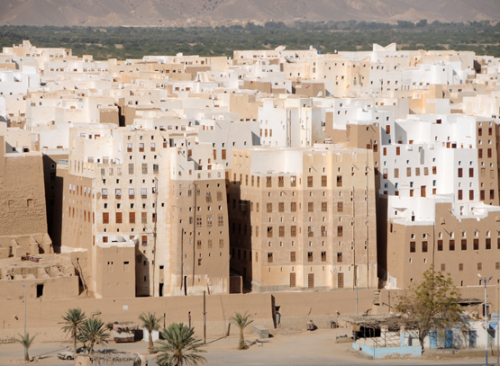 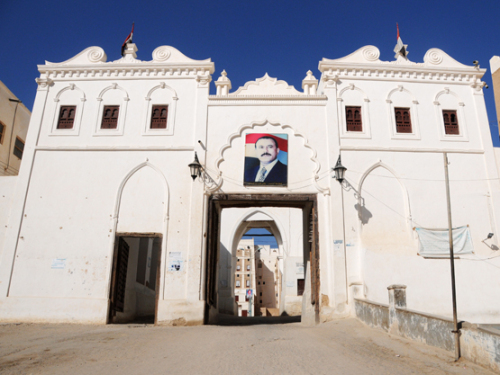 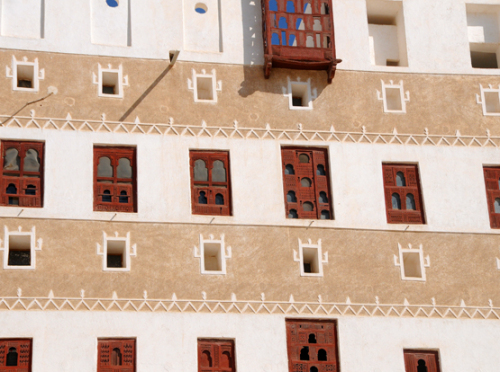 The inside of the city wasn’t really kept very clean like the rest of Yemen unfortunately. Shibam is a world heritage site run by UNESCO, but after Al Qaeda attacked the city just over year ago and killed several foreigners perhaps it doesn’t get as many visitors or attention as it used to. The upper left is a detailed photo of the exterior of one of the buildings, on the right is a small shack surrounded by ancient skyscrapers. 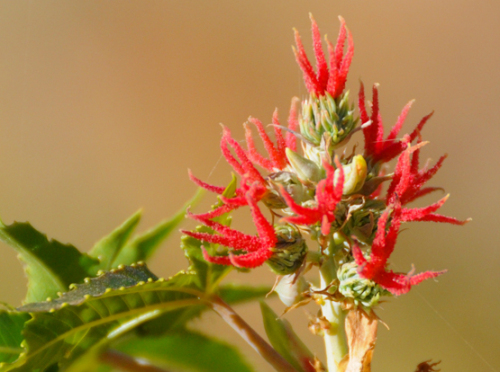 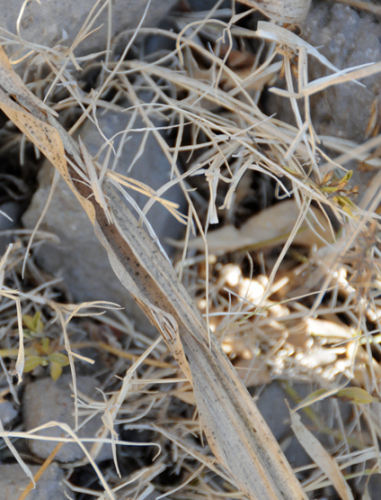 I’m not sure what that strange plant on the left is doing, but it was cool enough that I figured it deserved to be shared with the rest of the world on my Yemen page. On the right is a photo of some dried out grass above 7,000 feet. Can you spot the grasshopper in the upper right photo 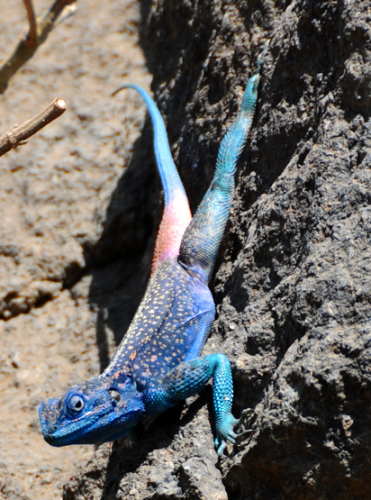 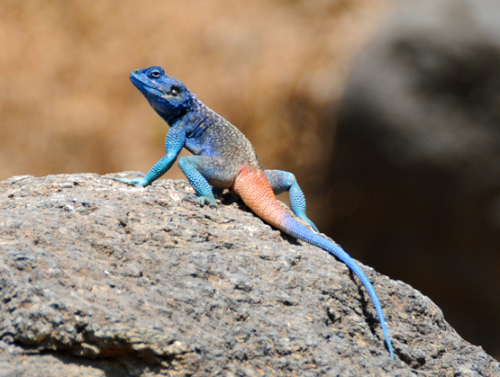 This amazing blue lizard was also found above 7,000 feet in the mountains outside of Sana’a. I’ve no idea what the species is but it’s definitely one of my favorite lizards in the world. He was about a foot long, so a pretty decent size and I saw four of them in less than 2 hours of hiking.