Believe it or not, but of all the destinations in the world Stonehenge has always been one that most intrigued me. Before I had ever left the country at the age of 14, one of my teachers gave me a photograph of Stonehenge that she had recently taken. I remember thinking it was the coolest thing ever, while my friends criticized me for having excitement over an experience that wasn’t mine. I guess physically having a photo taken from someone who had just visited Stonehenge made me feel one a bit closer to the place. From that age Stonehenge became one of the first destinations on my list. Some 70 countries and 20 years later, I finally made it! So you can imagine my surprise when I arrived to the UK only to find that nearly every British person I talked to didn’t seem to hold Stonehenge in high regards. Some even tried to discourage me from seeing the place at all!

Despite all the downplay I heard from locals I was not disappointed in any way when I finally arrived. Sure, the incredibly expensive entry price took a bit of the happiness away from the whole experience, but this was one of my earliest travel goals in life and making it a reality was important to me. When you compare the age of this site to other ancient ones such as the Great Pyramids, Machu Picchu, or places in Greece, Stonehenge puts them all to shame. These enormous stones were erected 5,000 years ago. 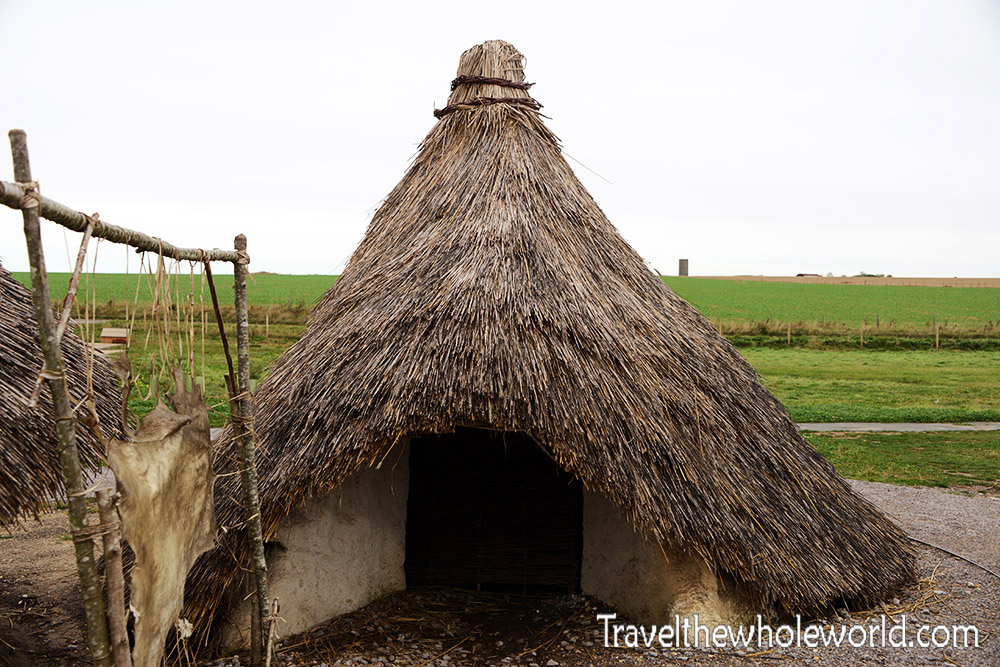 With the decades of waiting before I finally made it to Stonehenge, I can honestly say that the second I arrived I was truly taken back and blown away. The price to enter was 15 pounds, or $30 per person! And I had expected this place to be free… With that much money for a ticket you also get to visit some recreations of prehistoric huts their small museum on site. 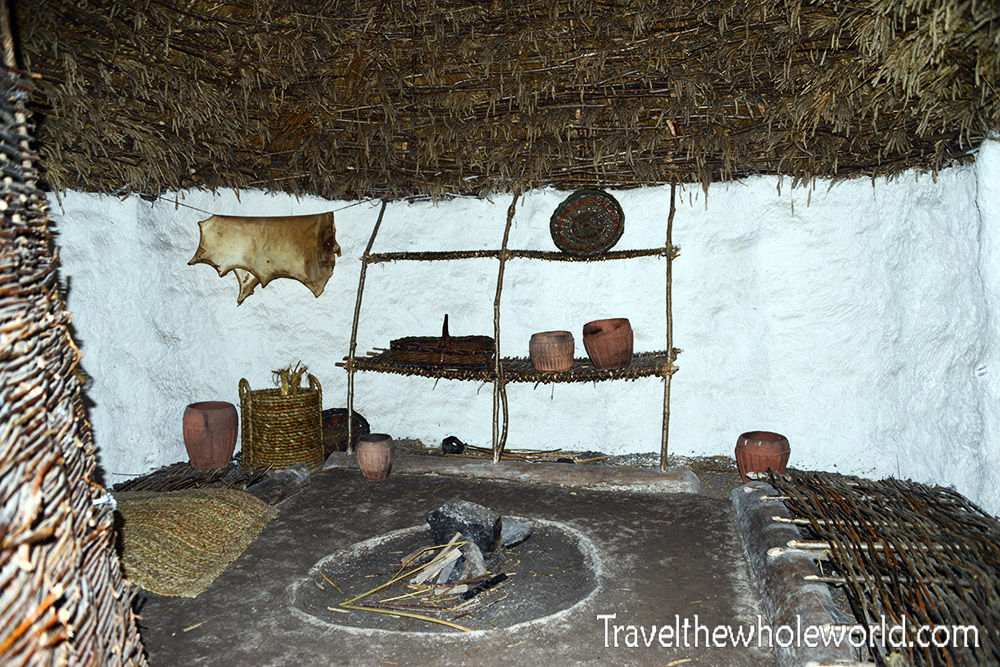 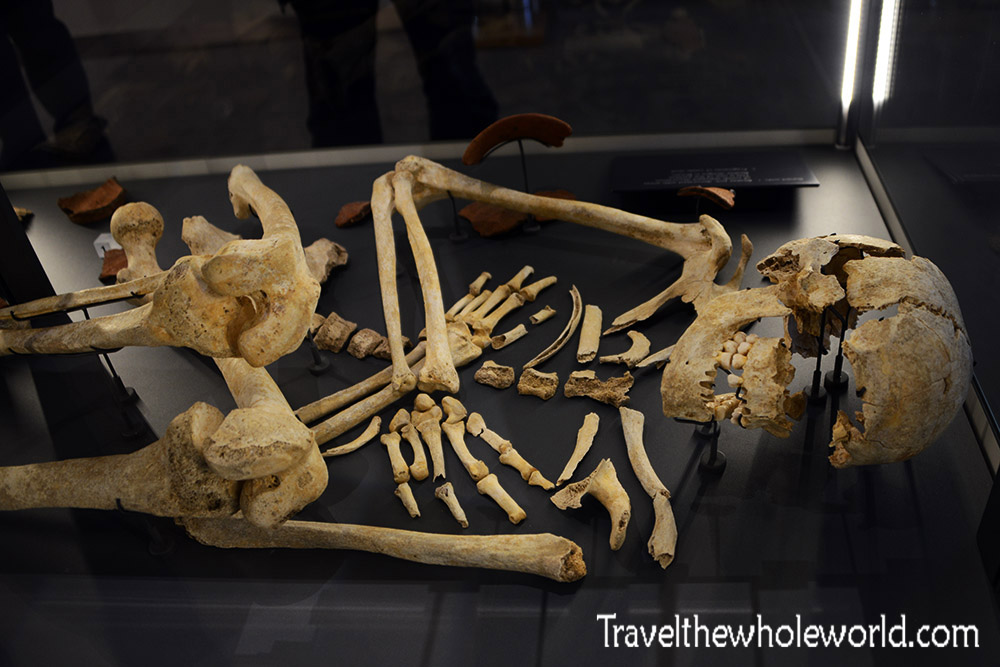 The museum has several artifacts on display such at these ancient skeletal remains of both people and animals. Archaeologists have found proof of people living here as long as 8,000 years ago, so it’s likely something about this area has always been sacred to people. Roughly 1,000 years prior to Stonehenge being built, archaeologists found proof of large amounts of earth being excavated and the creation of a large enclosure. It’s not known exactly what it was built for, but this is just another example that suggests this place has been sacred for thousands of years. 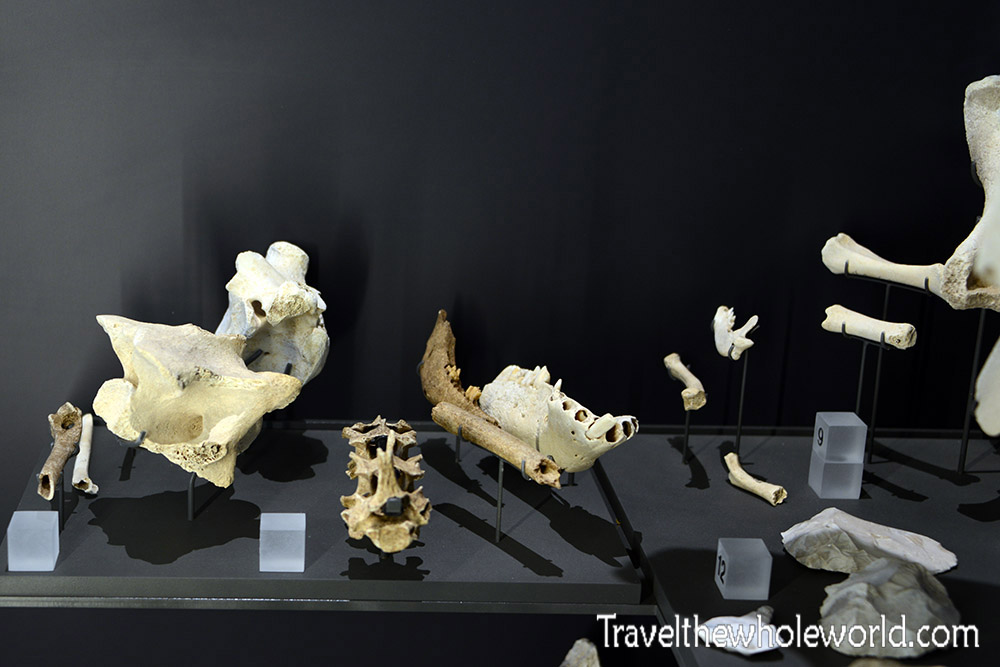 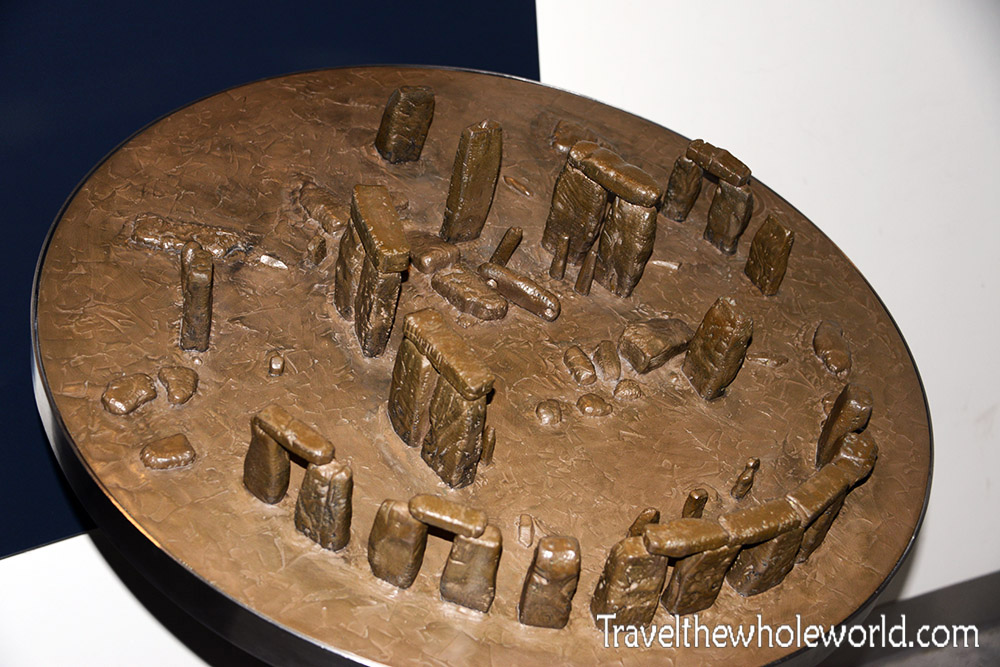 The photo above shows a layout of what the remains of Stonehenge look like today. The biggest mystery of course of Stonehenge is how such an impressive site was built by prehistoric people. In the photo below, a recreation of how archaeologists believe the giant stones were moved can be shown. A stone as large as this one would have required a hundred men to pull! 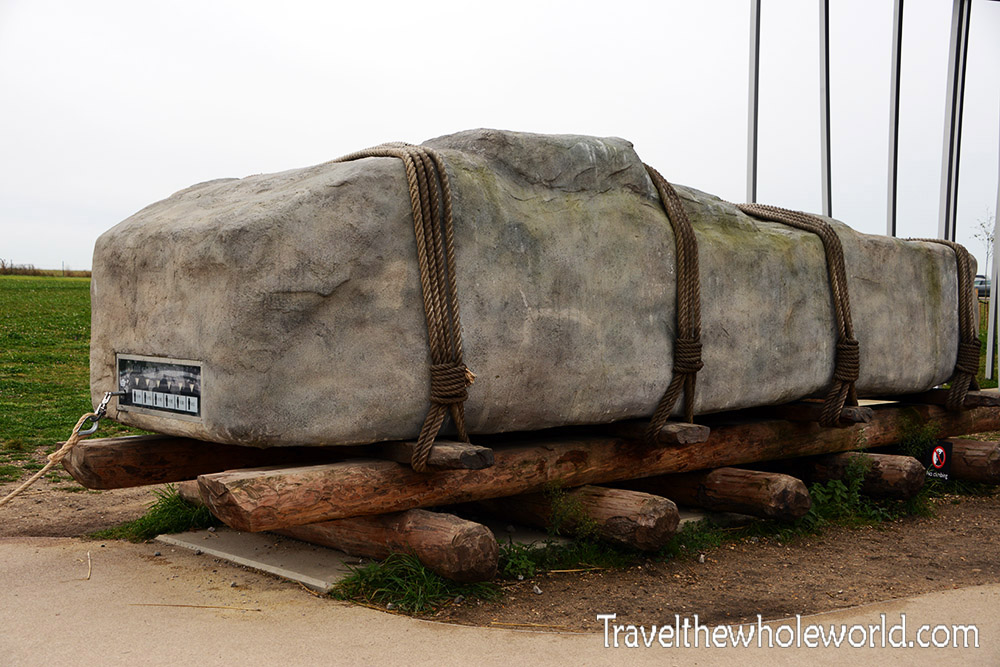 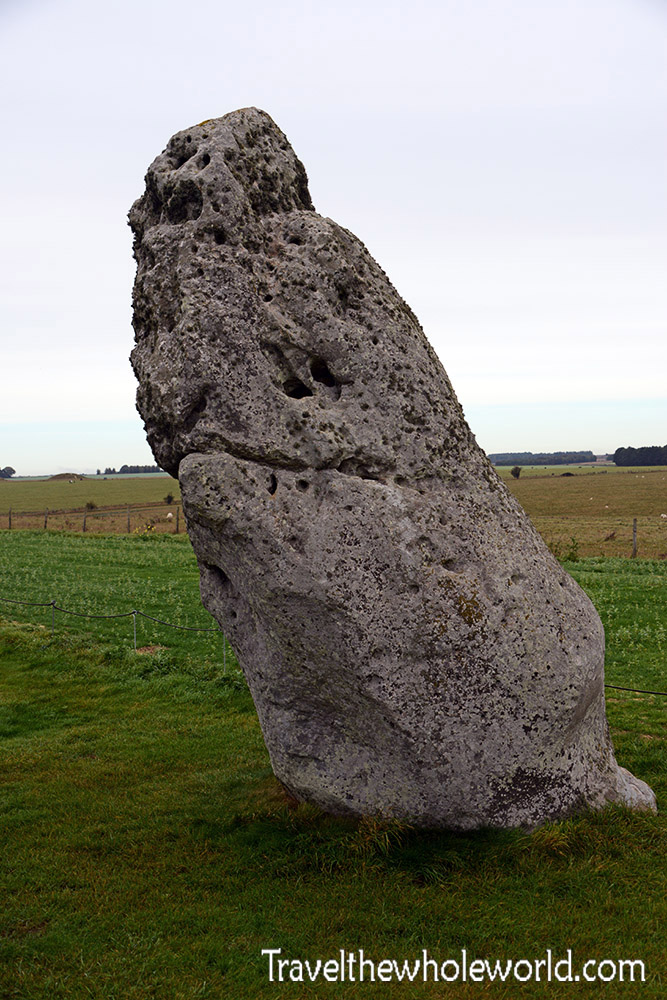 All the large stones I saw where part of the Stonehenge structure except for this above. This is known as the Heelstone. There are a lot of myths and legends associated with the stone, but it seems that archaeologists don’t know much about it or even how old it may be. The trail that goes around Stonehenge gets much closer to the Heelstone so you can actually see it in detail. The moss and lichen that covers the Heelstone also covers all the stones at the main site. 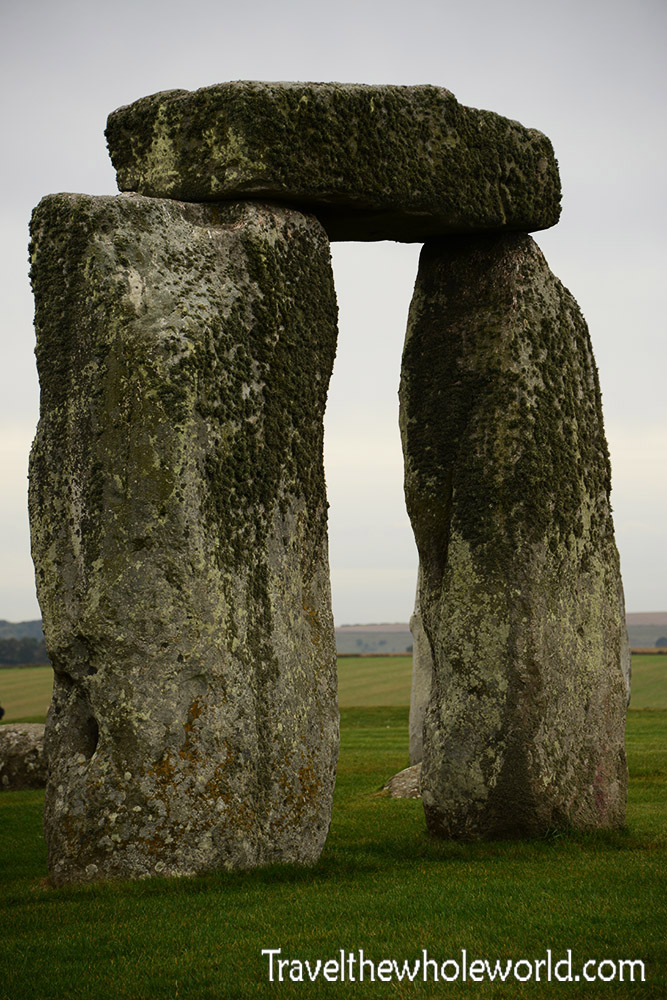 The last two photos of Stonehenge show some of the detail of the arrangements of the giant stones. The trail that you walk along never gets too close to the massive stones, but you can get close enough to see and appreciate the size of these monuments. These photos were taken using my cameras zoom, so they appear much closer than they really were. 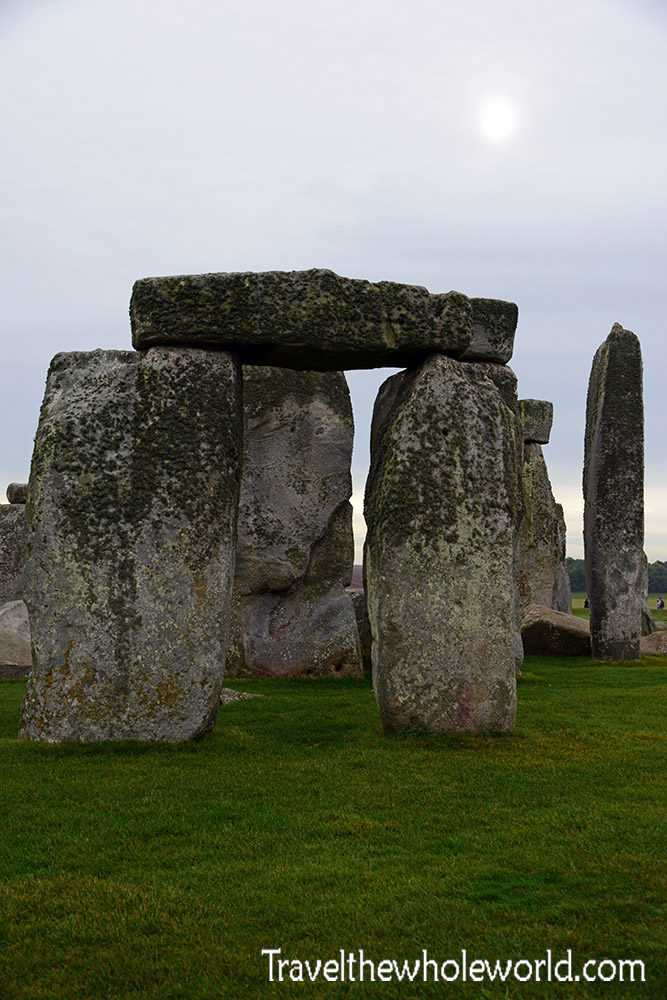 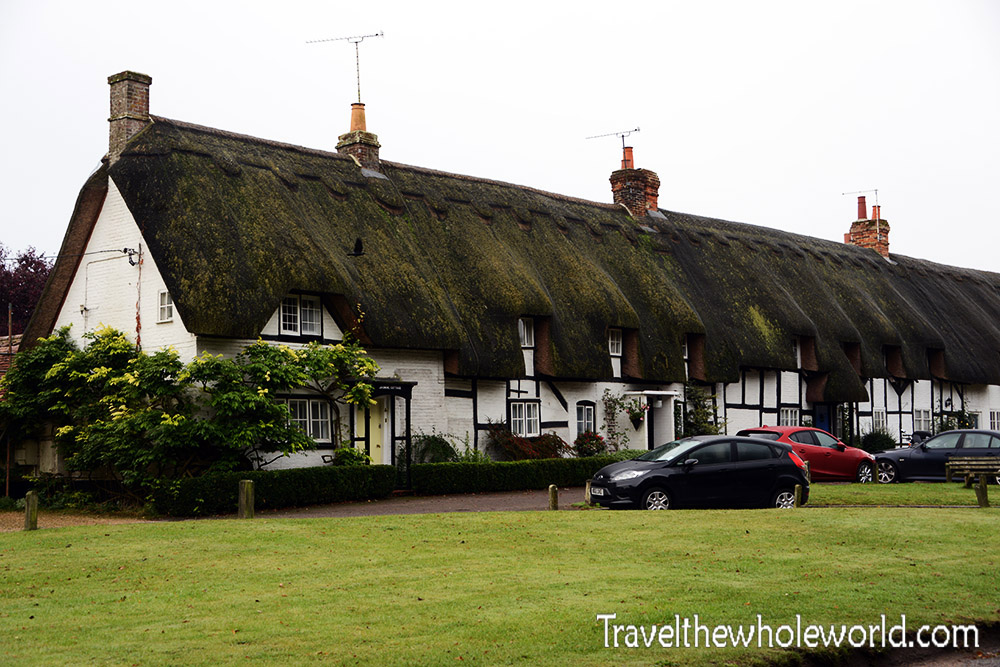 I couldn’t resist adding these last two photos of nearby Salisbury. This area is just outside of Stonehenge and where I had spent the night the evening before. I always thought Salisbury was a reasonably sized city but it was more of an English village. Much of it seemed to be built up out of these traditional style English homes. Other than spending the night in Salisbury, I didn’t do anything else here, although a local man at the hotel bar offered to get drunk with me the following night! 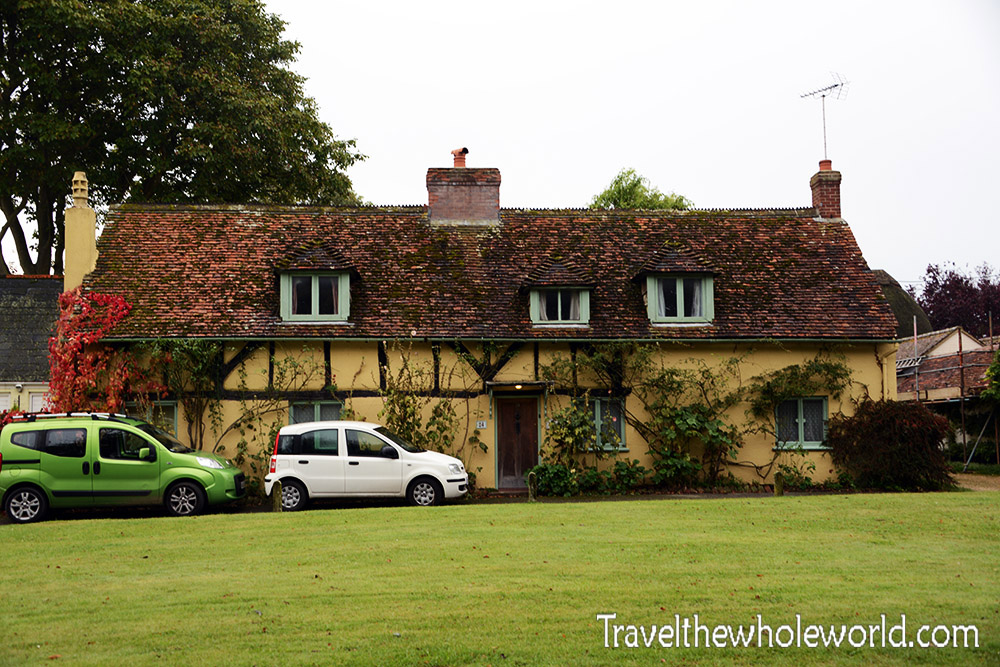