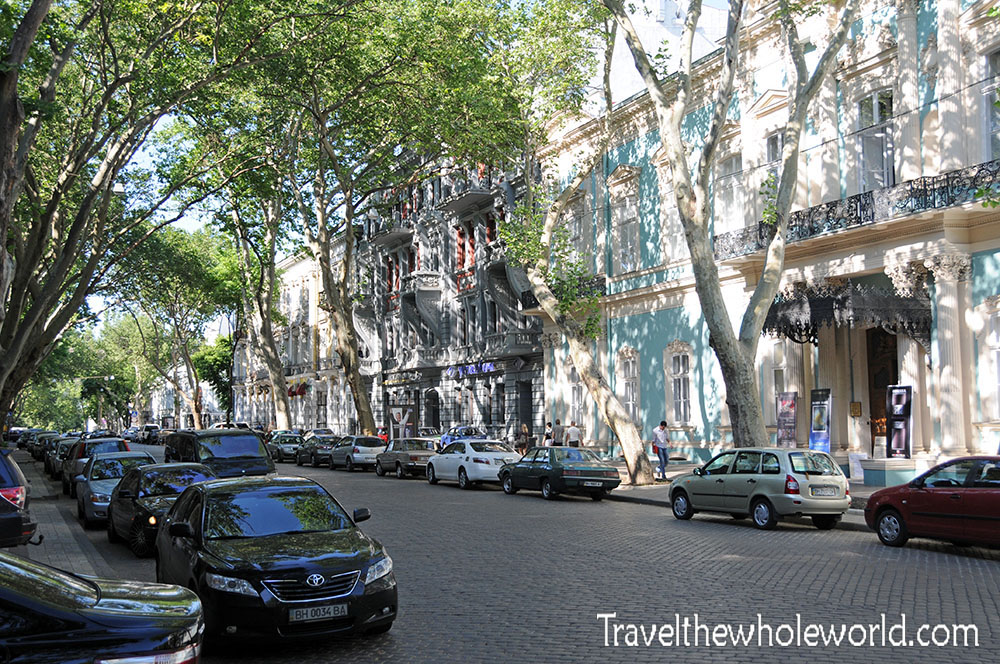 In southern Ukraine along the Black Sea is the city of Odessa. You might assume being in eastern Europe it’s some ancient settlement, but it’s actually a relatively new city of only 200 years. Odessa is famous in the country for its beautiful city, beaches and warm weather. Odessa is made up of several districts. This photograph above shows one of my favorites, with cobblestone streets. 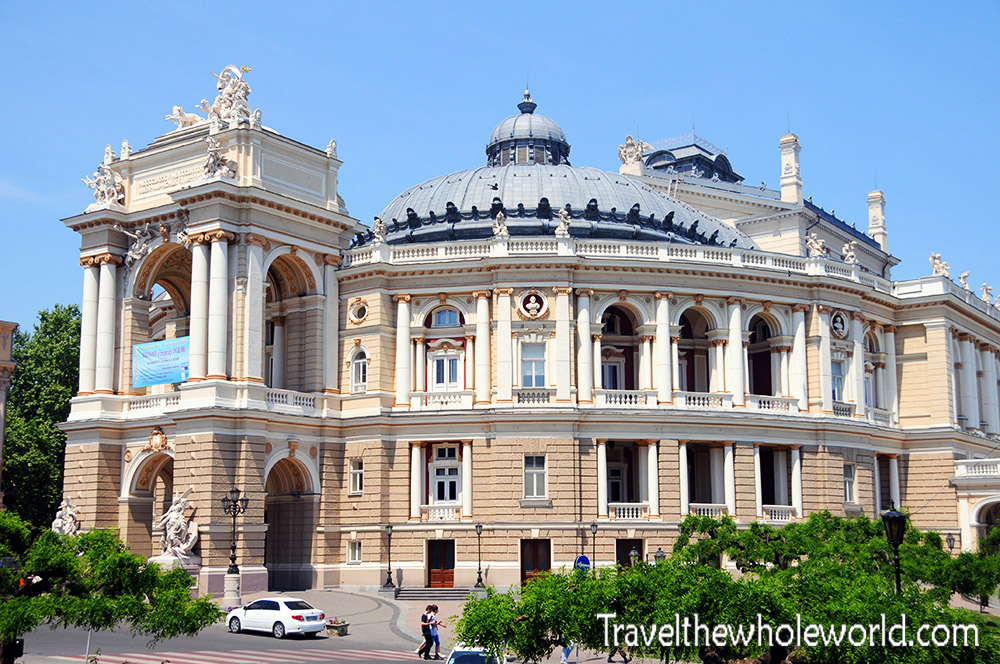 One of the most famous buildings in Odessa is the opera house which opened over 200 years ago. It’s basically as old as the city itself and has long been a source of pride for Odessa. After World War II ended, this was one of the first places that the Soviets returned to inspect and were happy to see it had received virtually no damage from the fighting. Above is the theater itself. The photograph below shows some ads with upcoming events. 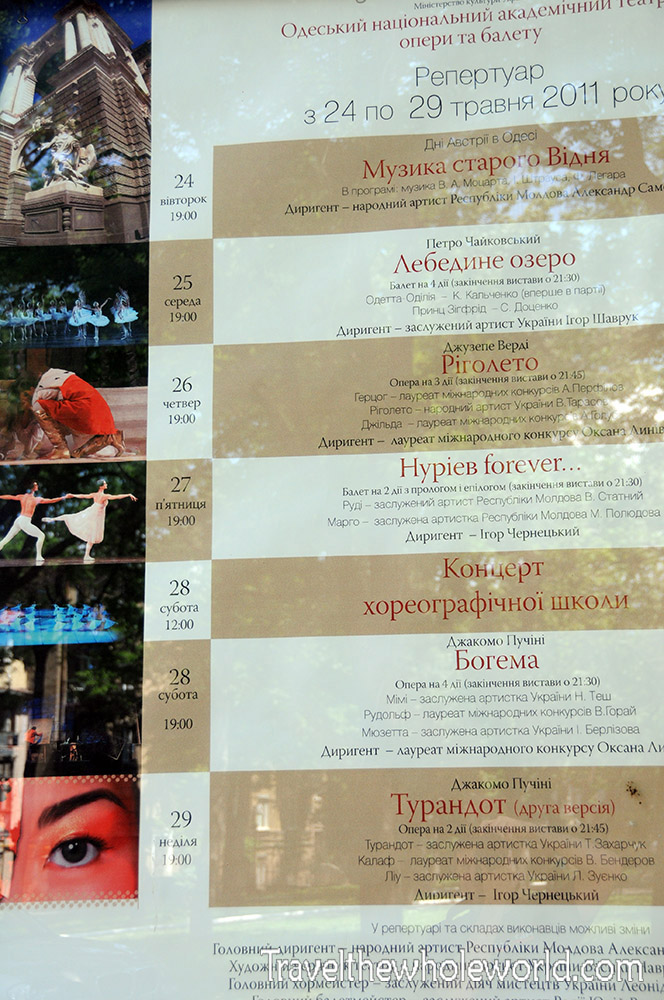 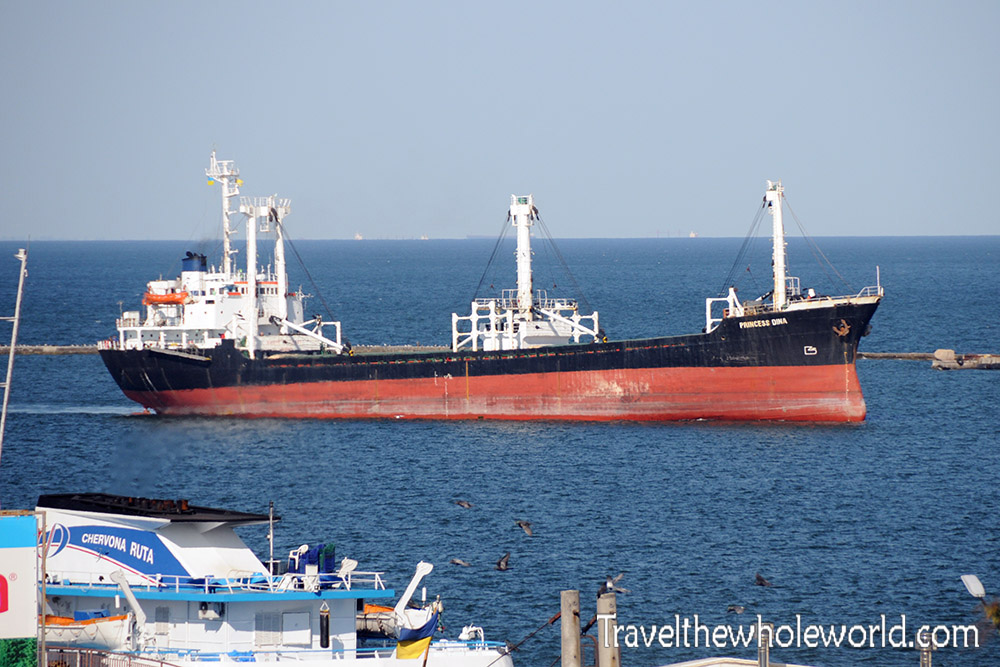 Since Odessa is a big city, it’s the largest port for the country and makes trade possible by ship to other Black Sea nations like Georgia, Bulgaria, Turkey etc. 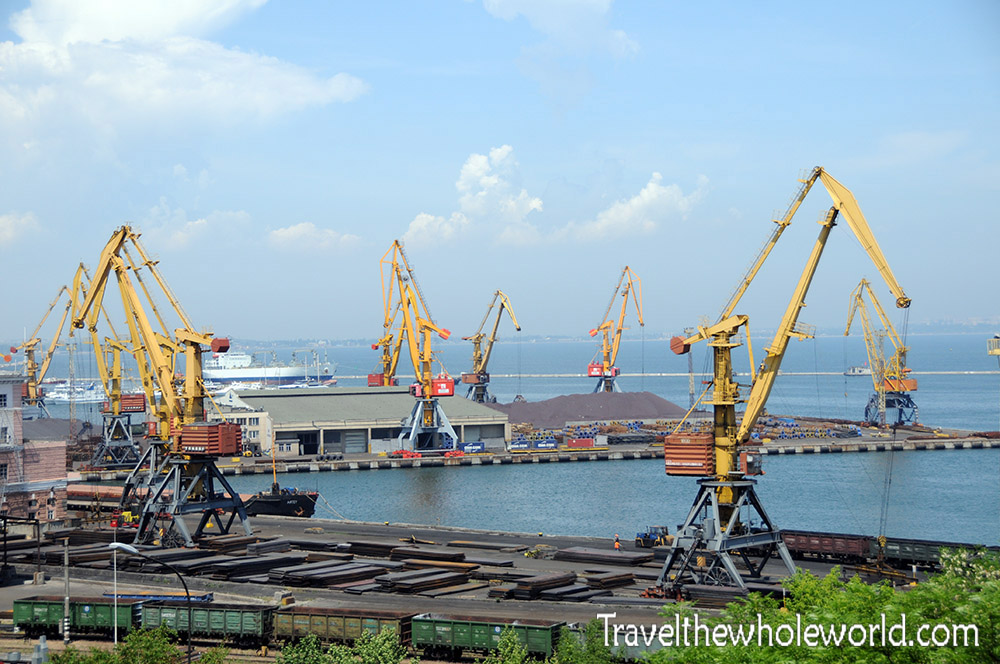 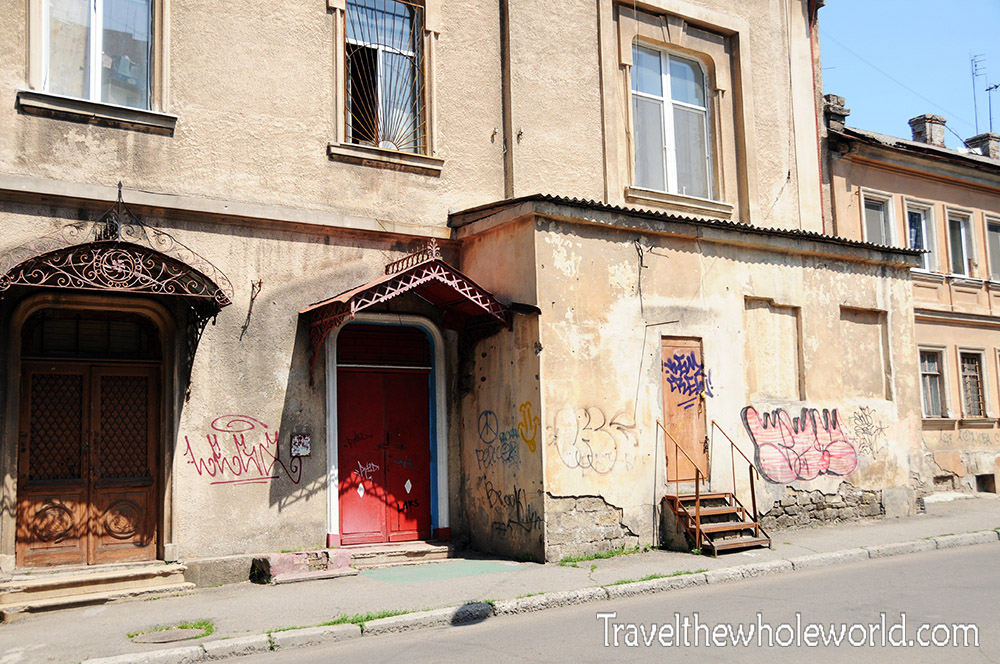 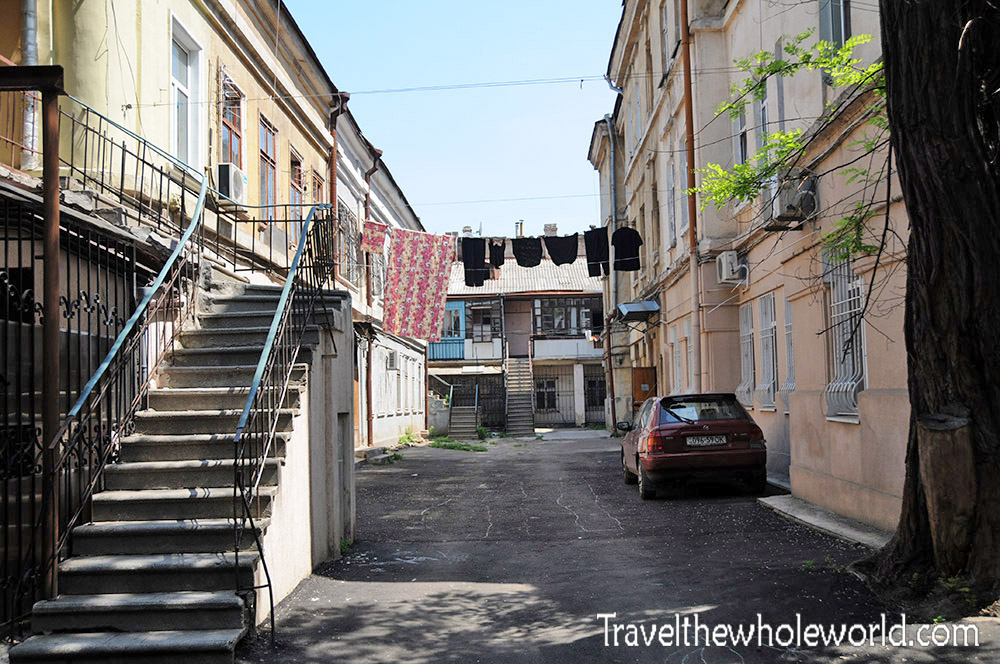 My hotel wasn’t in the nicest area of town but the people here were still nice. I met an evil group of guys in their early 20s in Kiev and a guy who I think wanted to fight me on a bus in Odessa, but otherwise everyone else I met was helpful and nice to me. Above are some of the more common living spaces for locals in Odessa. I actually had a room in an apartment which was nice since the building was shared by locals and not in a touristy area. This made it more difficult to travel though since hardly anyone speaks English here. 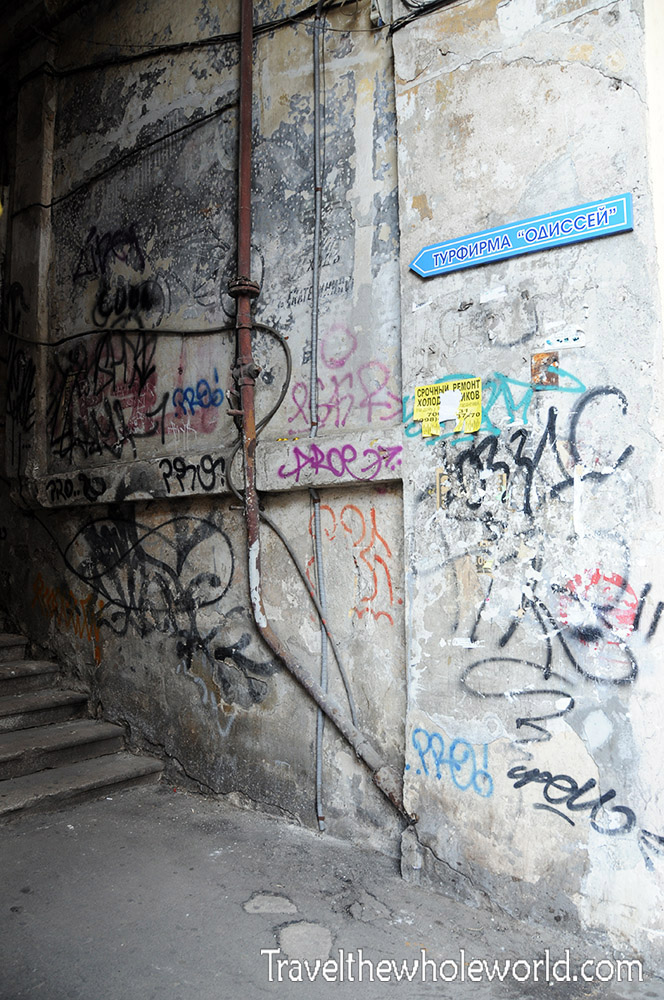 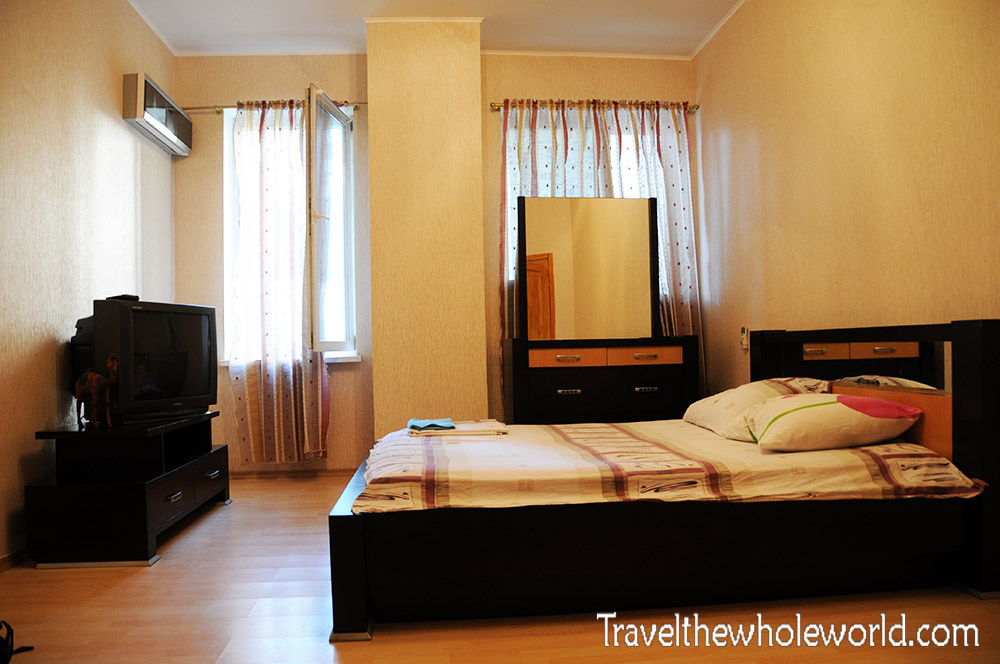 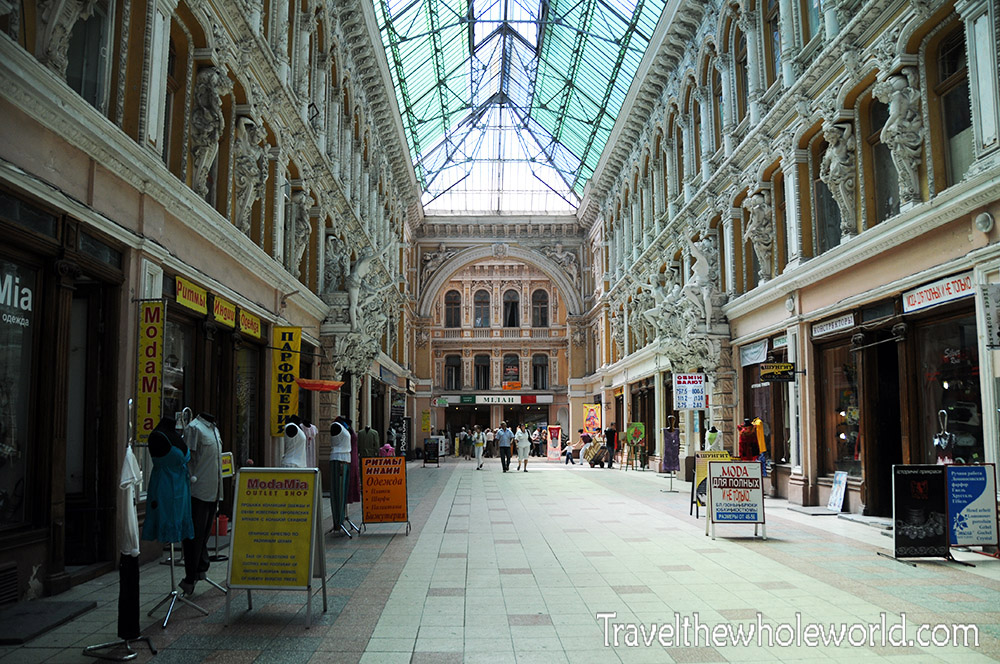 Odessa is made up of several districts, like this cobbled stone area that leads into the most popular street called Deribasovskaya street. On the right is an indoor mall in the city. 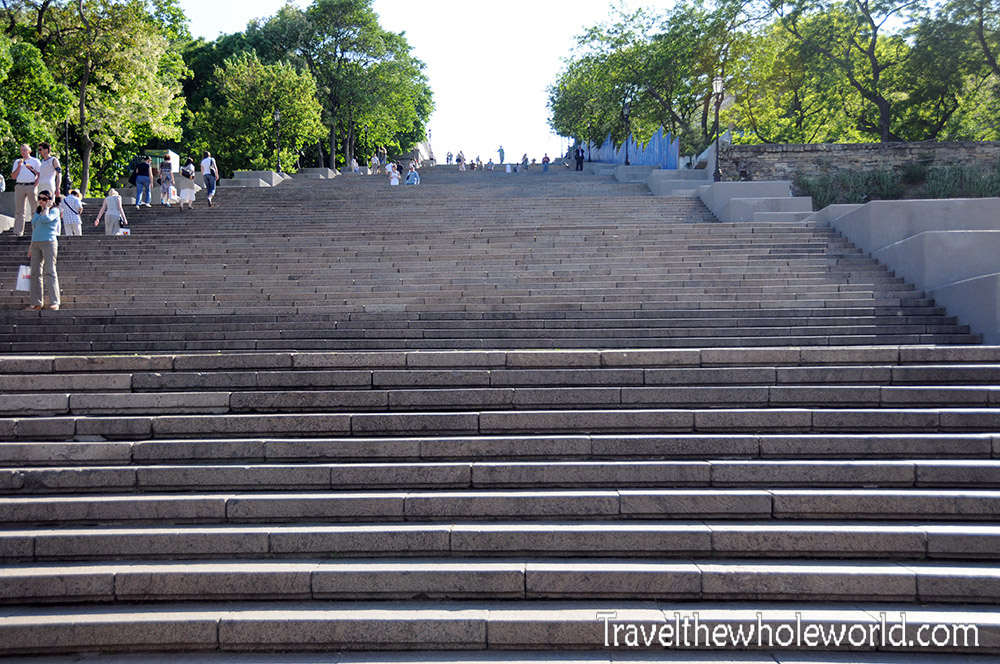 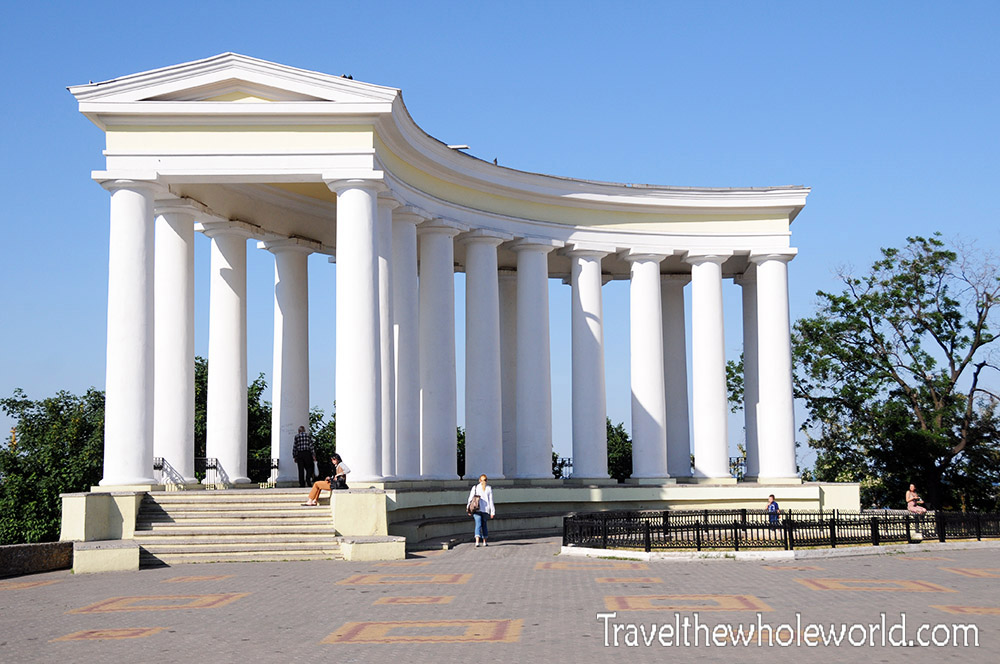 A symbol of Odessa is the Potemkin Stairs, seen as the entrance to the city for those coming from the sea. By the Potemkin Stairs are several of the city’s most famous landmarks. In 1925, a silent film was made on the tensions between the the Tsar’s Cossacks and Czars, with one of the most brutal scenes showing Tsar’s marching up the steps killing dozens of unarmed people. This event never actually happened, but as the film was such a success it’s always associated with the stairs today. To the right located close to the stairs is Mikhail Semyonovich Vorontsov’s Palace in Odessa, with a large statue of him below in a city park. He was a famous Russian prince known for his leadership in the Napoleon Wars and other battles that took place during the mid 19th century. The man on the lower right is a modern day military hero who told me he was once crew on a Soviet submarine. Since I once lived on an American naval ship when I was in the Marines, I guess technically we were cold war enemies at one time, with him once scoping out US military ships. I was able to gesture to him that I was once on an aircraft carrier and he shook my hand. 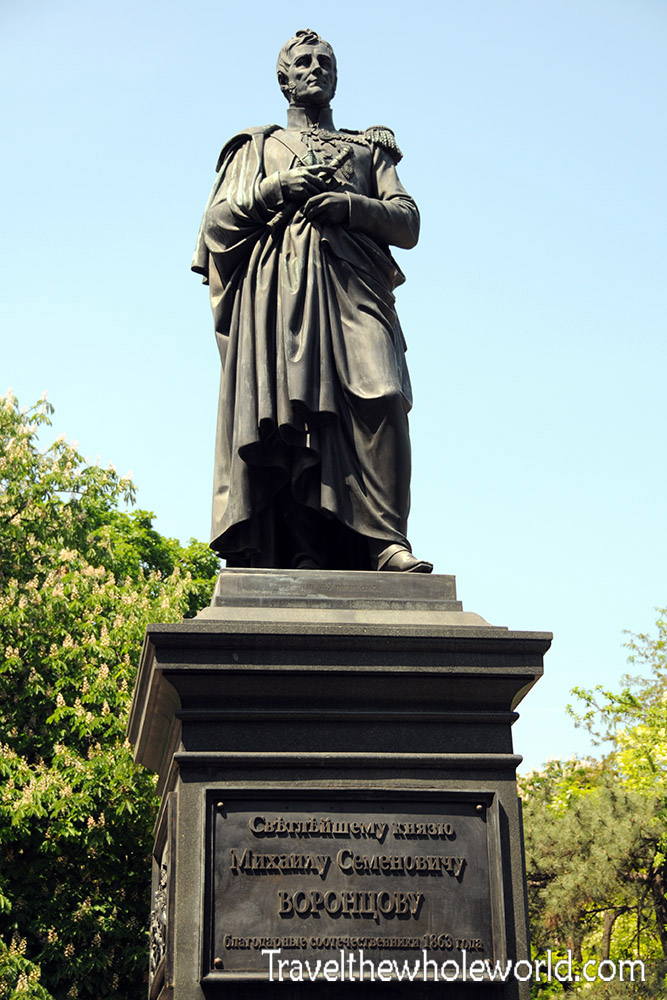 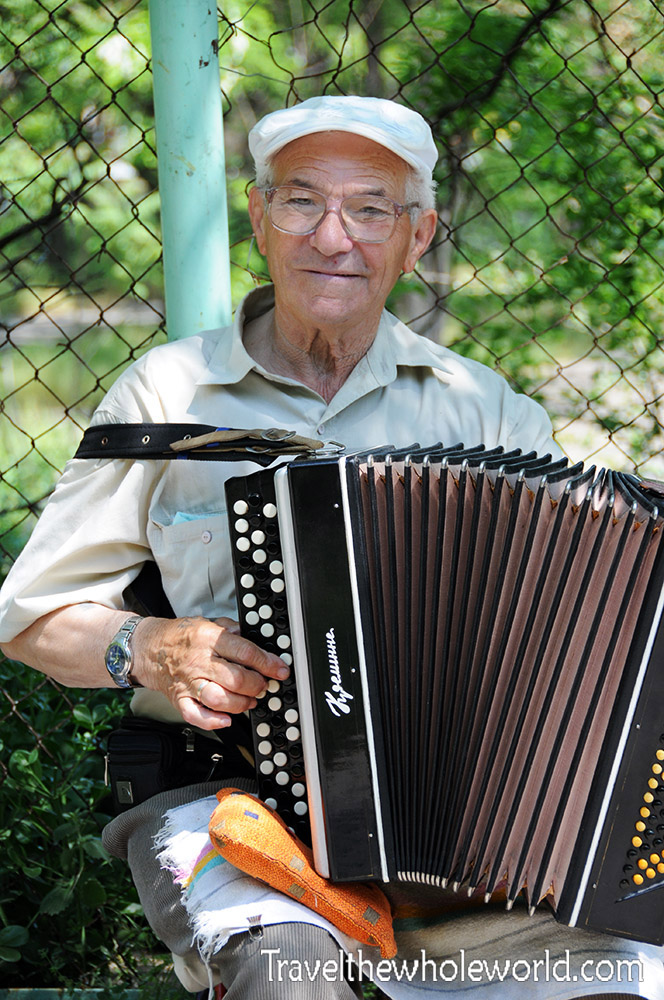 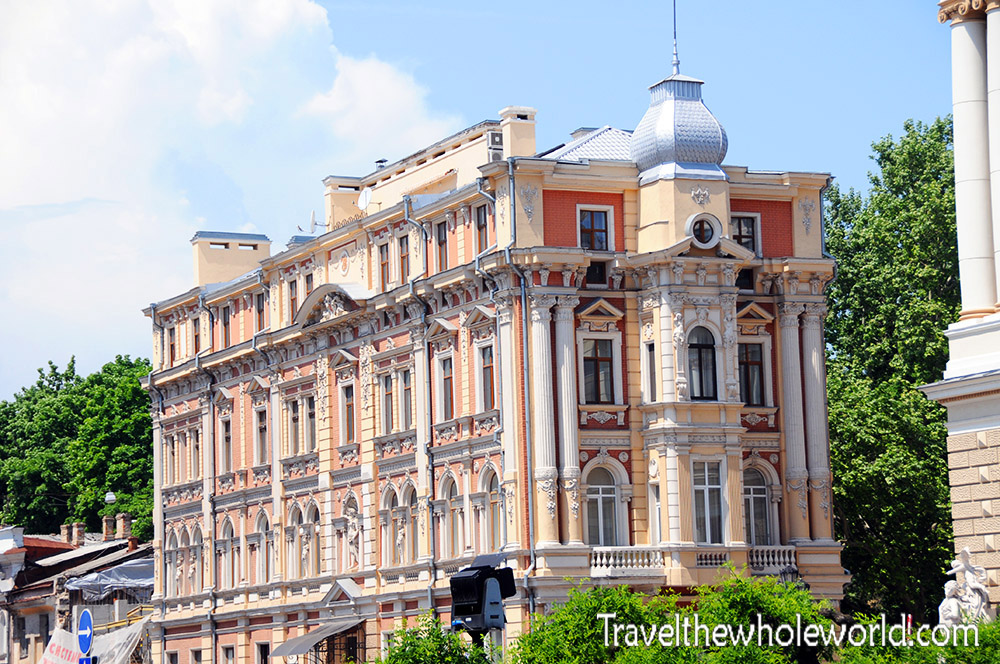 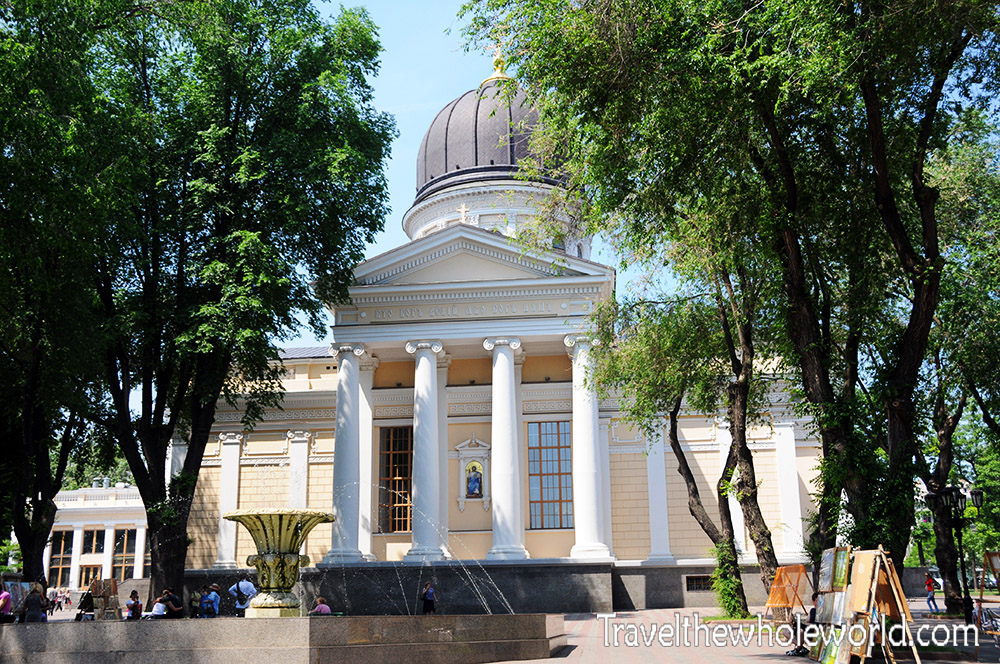 I’m not sure what the building on the left is, but it was right by the opera house and it got my attention. On the right is the Spaso Preobrazhensky Cathedral located on Deribasovskaya street. With no guide and not knowing any local languages it was hard to get information about this place. 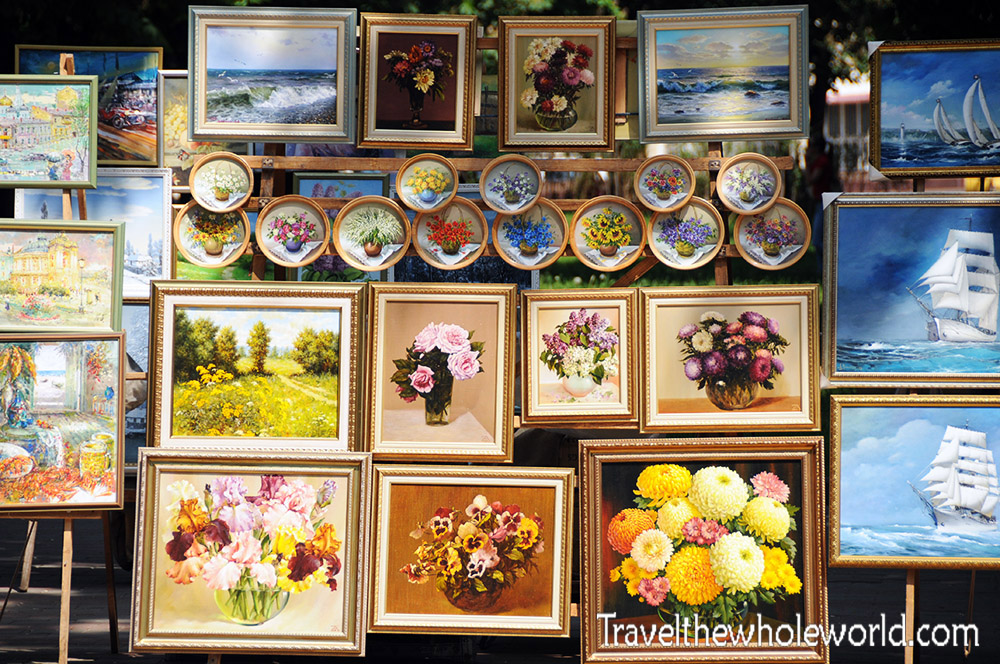 These paintings were all for sale in a small market in front of the church. Several artists have their work set up with some surprisingly good prices. I rarely purchase souvenirs, but with so many beautiful paintings I couldn’t resist. I actually regret not purchasing more! One of the paintings of a sailing ship now sits on my bedroom wall. 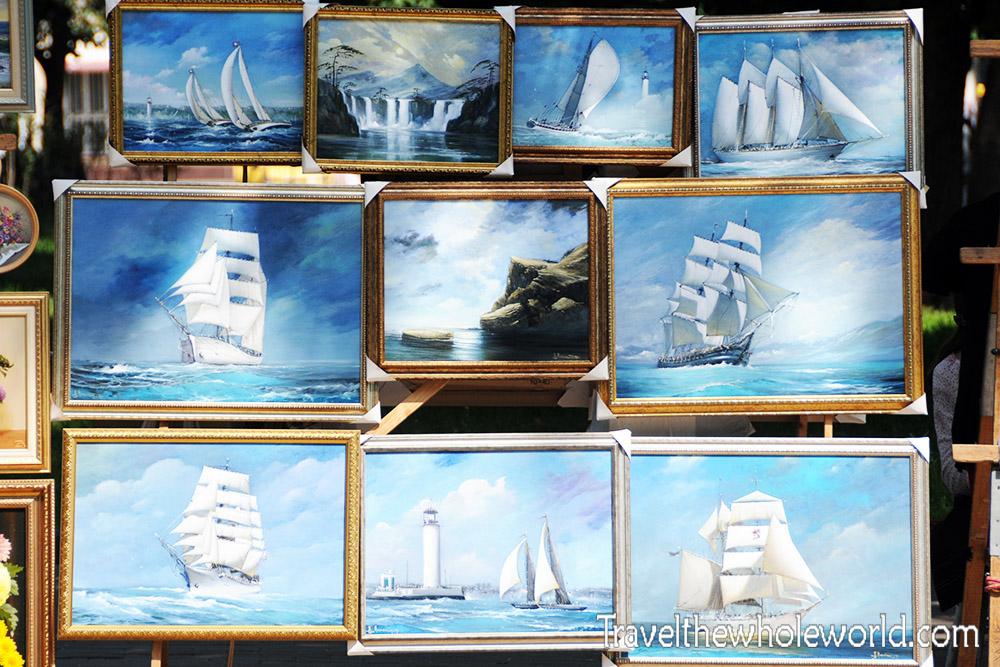 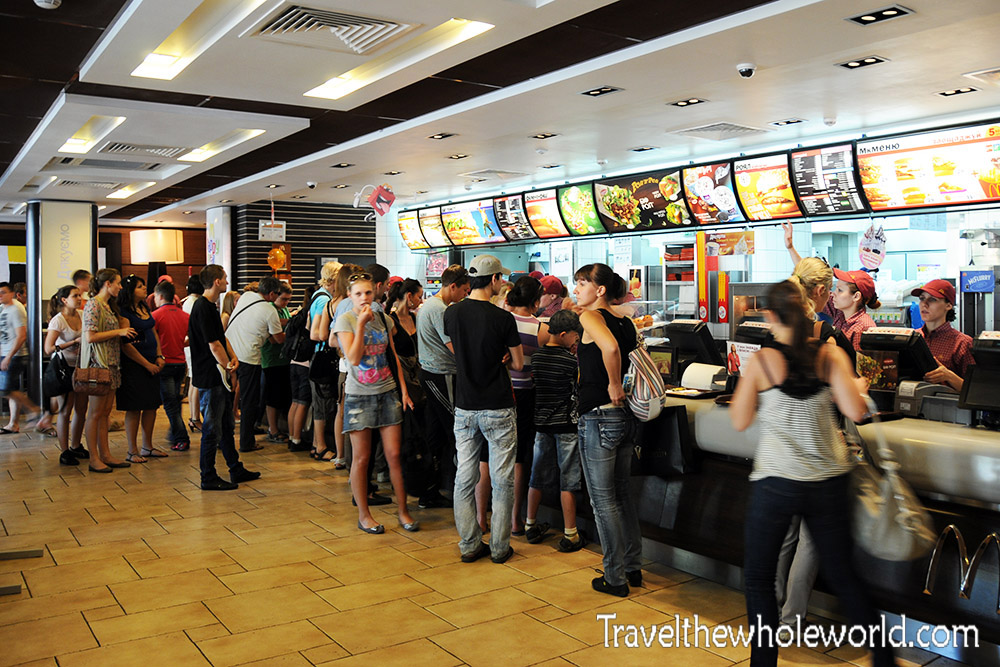 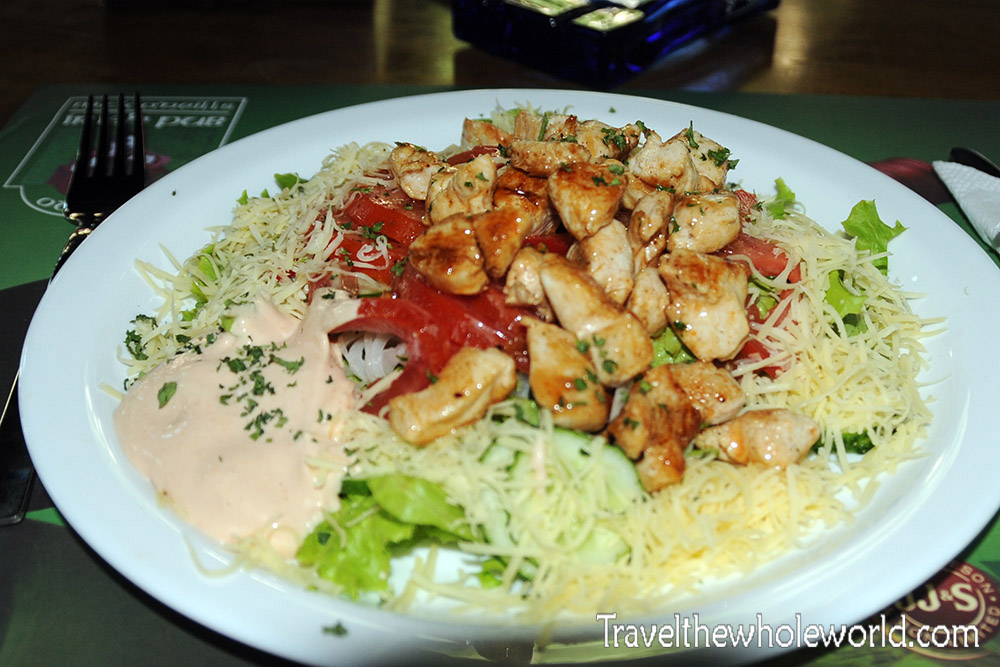 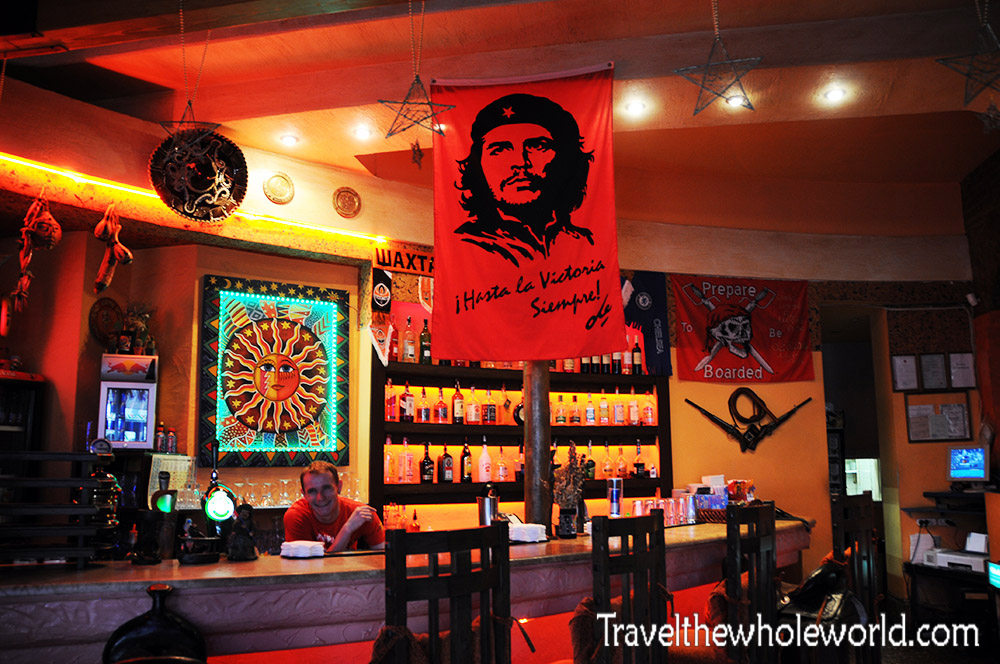 Like Kiev, there is no shortage of international restaurants here. I passed by a McDonald’s in Kiev that was super packed and later regretted not getting a photo, so I took one of a McDonald’s in Odessa. The photo on the right was my lunch at a very nice restaurant in downtown Odessa. I was going to go back since the prices were good, only $6 for that meal at an upscale place! The people here though ripped me off and charged me $4 for an 8 ounce bottle of water so its a shame that you have to be careful even at nice restaurants with corruption. Most of Ukraine is known for its nightlife, and of course Odessa being a seaside town is one of the best. I didn’t go out drinking in Odessa since I was traveling solo and more than a few drinks at night when you’re by yourself is never a good idea. Even though I didn’t visit the main nightlife strip where I hear there are lots of clubs, there are plenty of other nice bars that are throughout the city. I do love Guinness so when I came across an Irish pub I tried to order one but they were out! This Mexican restaurant had a nice bar in it and great food too. I was surprised to see my waiter was African at the Mexican restaurant and asked him his story. He was from West Africa and decided to travel to different countries in Europe for work, and when he had enough of the place he simply moved on to the next country. 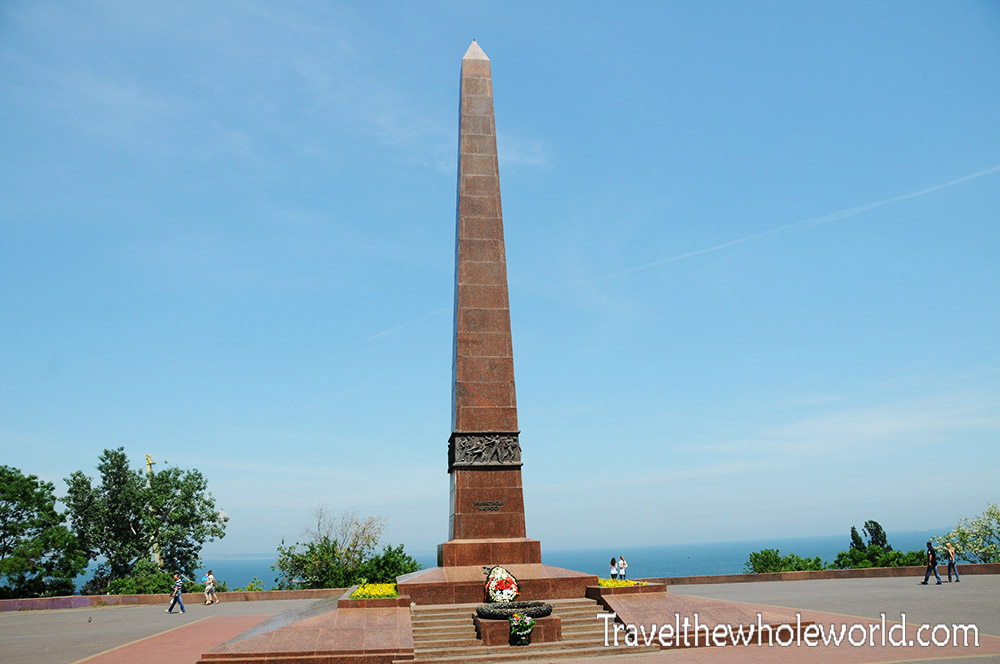 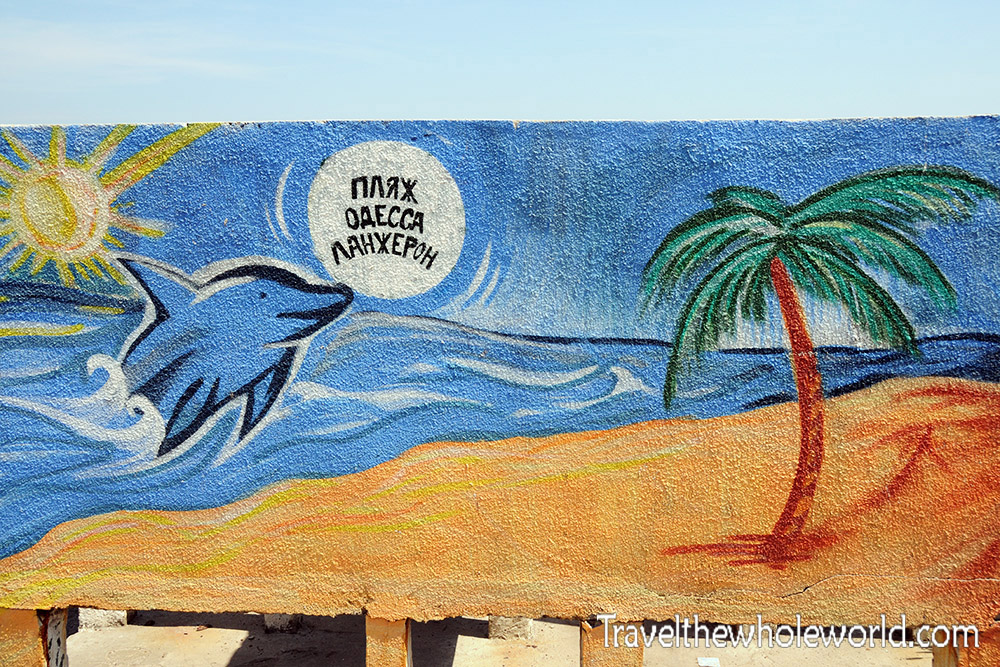 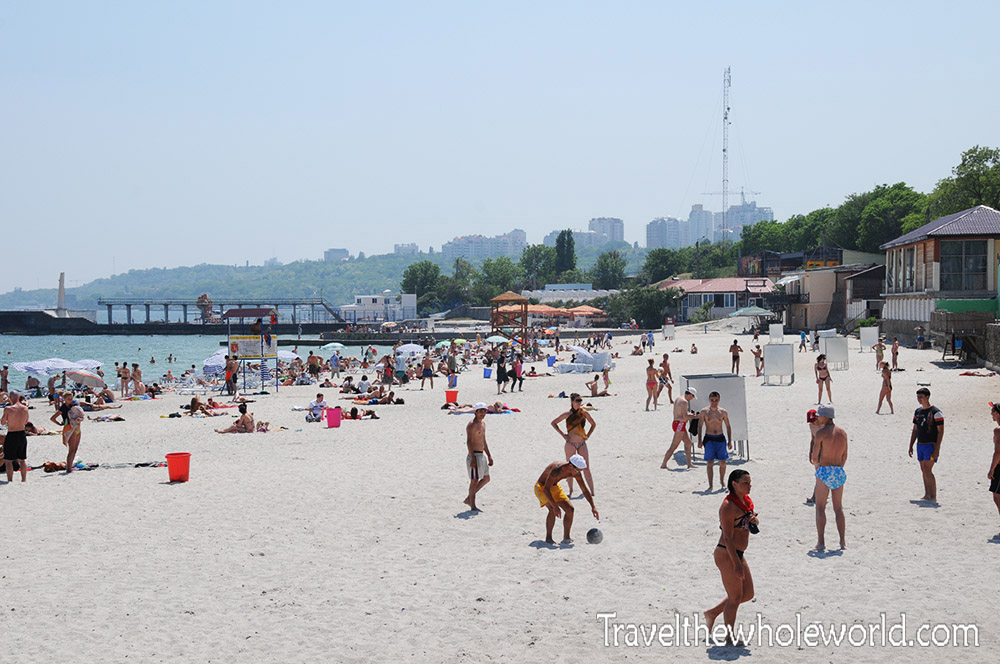 And of course one of the highlights of Odessa, the sea and their beaches. There are miles of beaches here in Odessa, some are packed like Otrada Beach in the surrounding photos, while there are some remote beaches and even a nudist beach out there as well. The water was still cold in May, but if you’re willing to get used to it it’s not that bad after you give it a few minutes. The weather was still warm though with temperatures in the mid 70s F or mid 20s C and most people out to work on their tans. 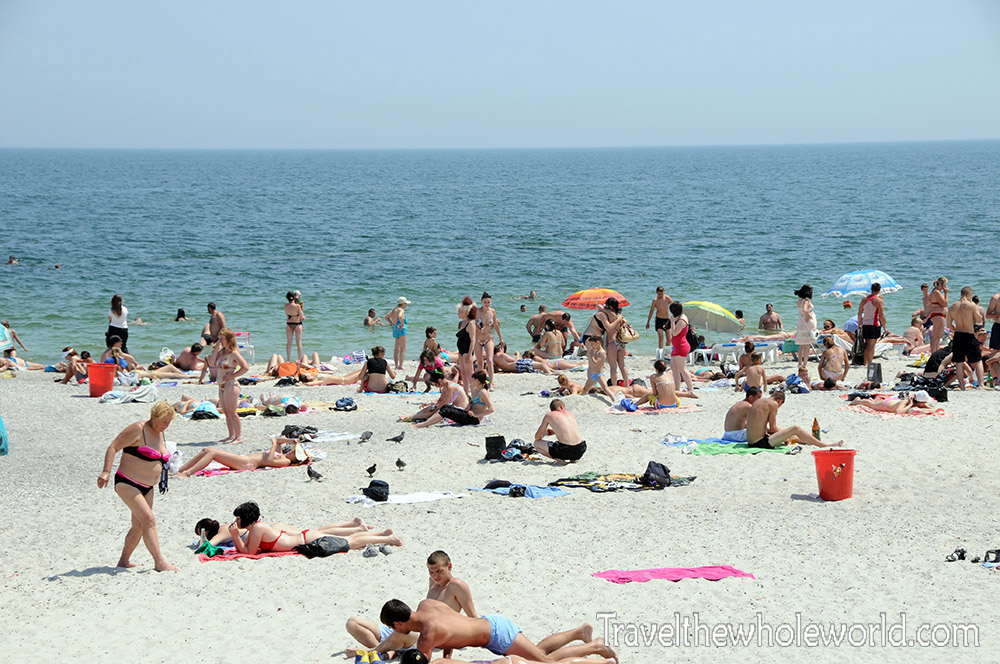 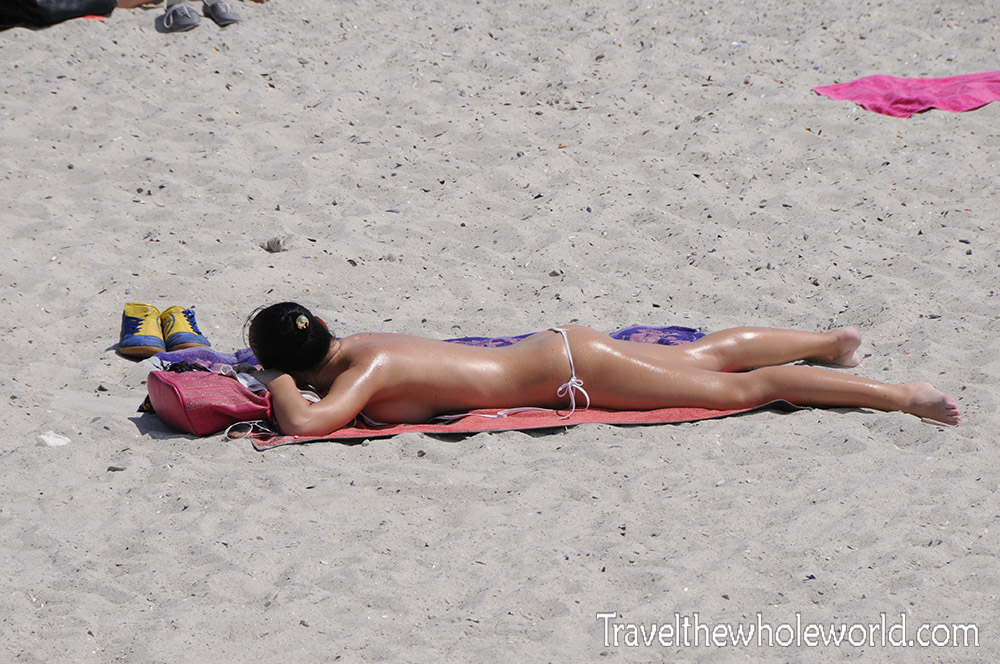 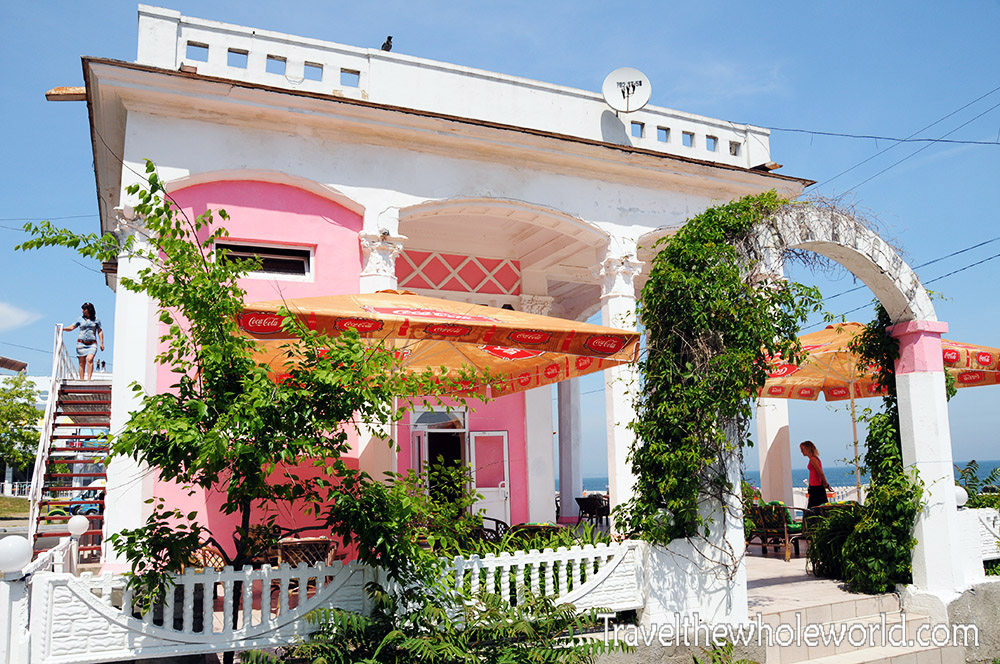 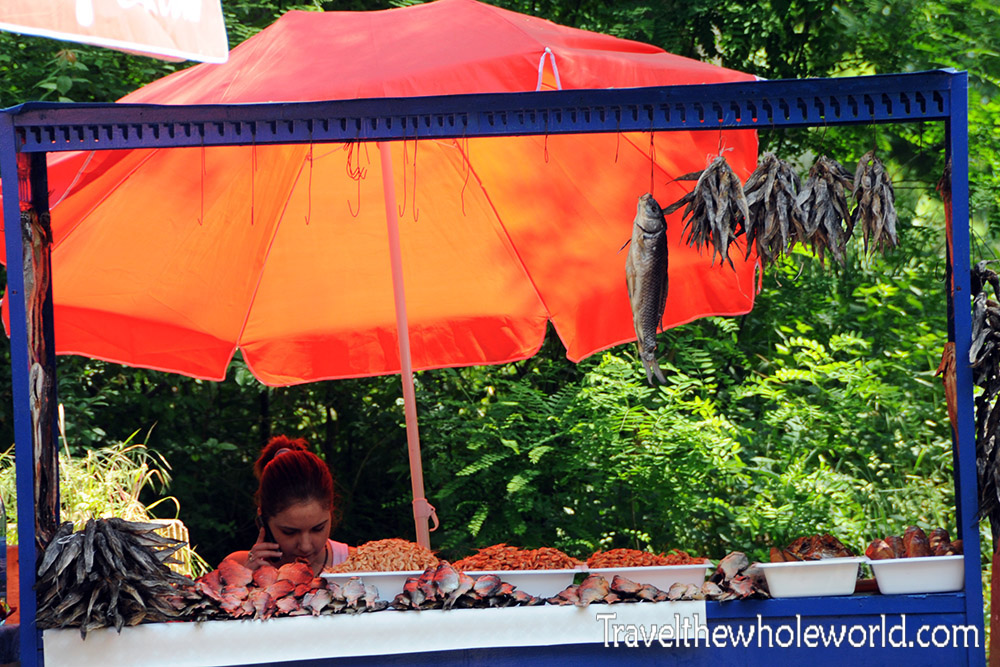 An example of a nice cafe along the beaches of Odessa and a street shop selling fish on the right. Odessa has several beaches along the black sea, with these photos being only one of them. I didn’t make it to the other ones, but everyone here seems to worship Arcadia beach.