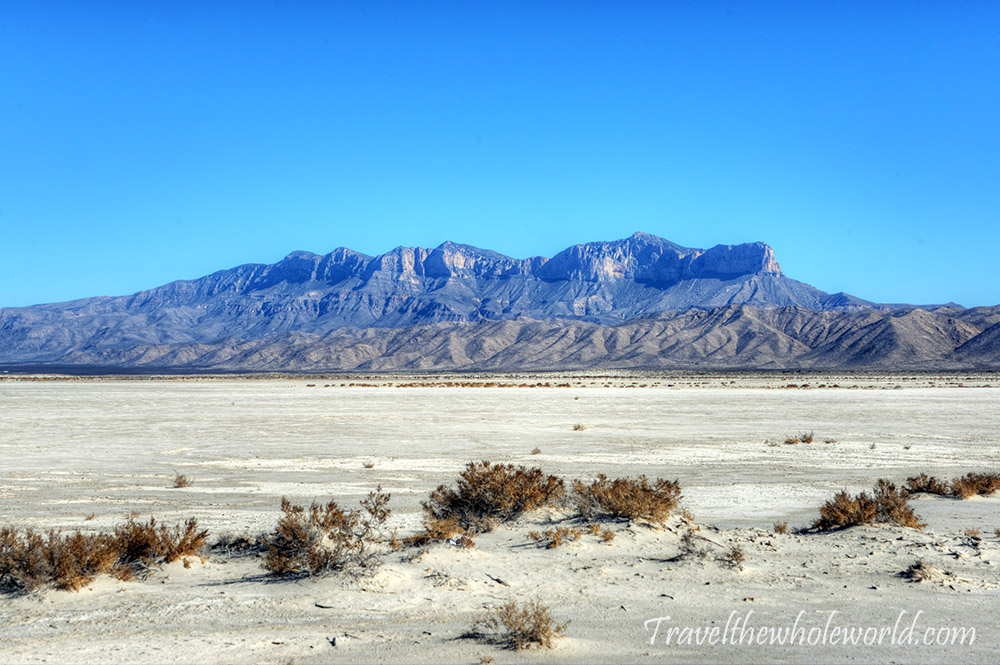 Guadaloupe peak is a hidden gem, that somehow many people in Texas don’t even seem to know about. In their defense, Texas is bigger than France, so its kind of hard to know everything in such a giant state. At 8,750 feet (2,667 meters), Guadaloupe peak has a reasonable amount of elevation and makes for an excellent day hike. Some of the views around the surrounding plains from the summit made this one of my favorite 50 state high points. This photo was taken as I approached Gaudaloupe peak from the west, and saw it for the first time. 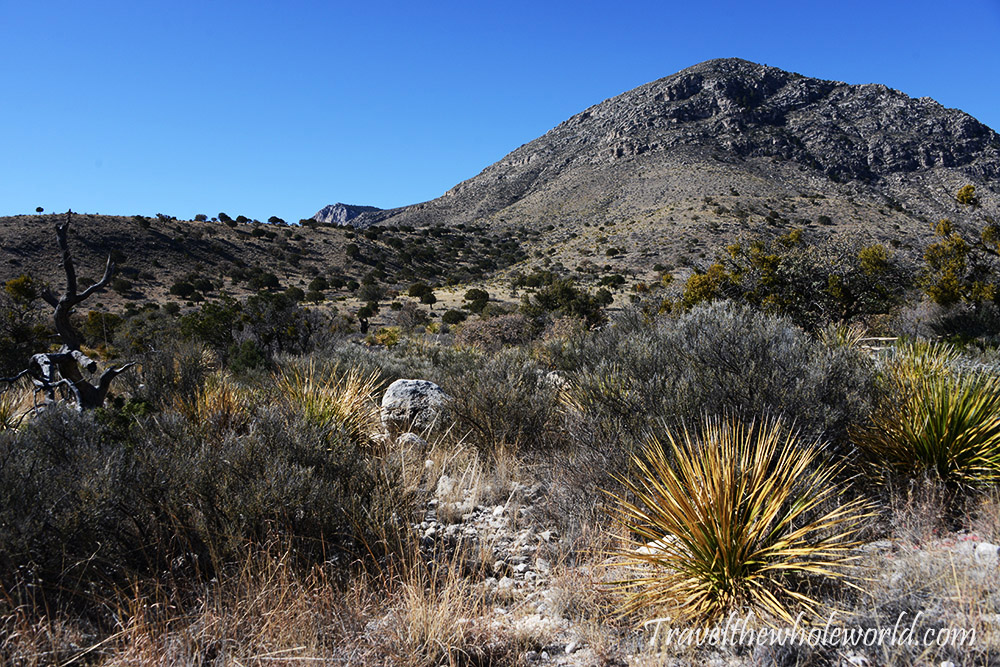 The hike begins around 5,700 feet (1,737 meters) at this point photographed above. This area is littered with multiples species of cactus like this one below. Either they don’t live higher up on the mountain, or I hadn’t paid any attention to them as I climbed up. 1,000 meters though is usually very significant to vegetation. 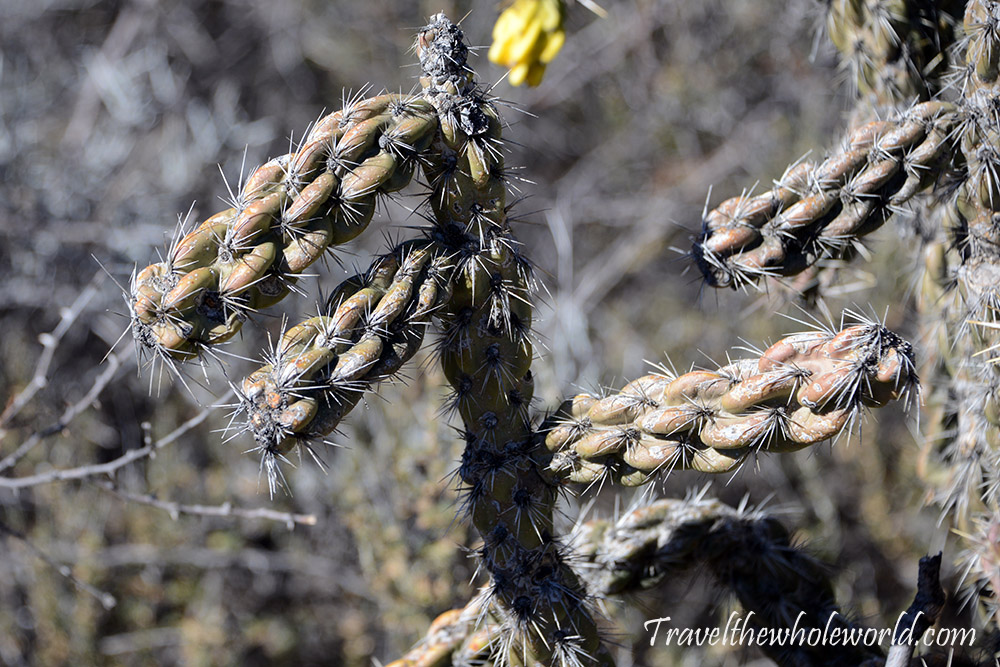 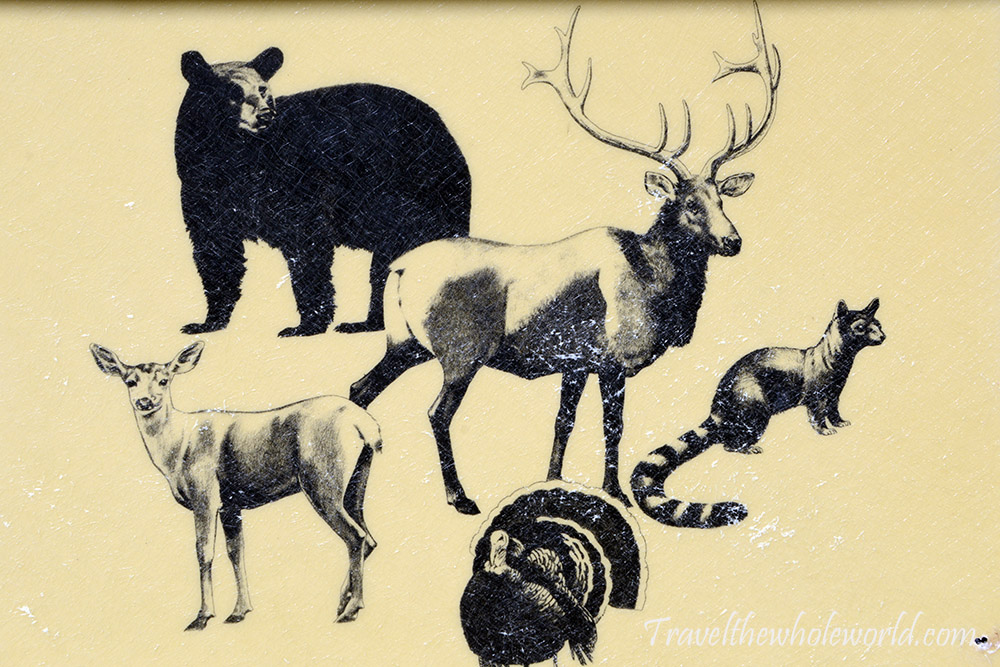 Right at the beginning of the hike was this wildlife sign for the surrounding mountains. As I drove here and saw nothing but empty flatlands, it was hard to imagine mountains much less a habitat for things like bears and elk. I think you’d be incredibly lucky to spot any real wildlife out here to be honest. Most of these game animals probably live deeper in the mountains, while Guadalupe Peak is relatively close to the visitor center and has commonly hiked trails. 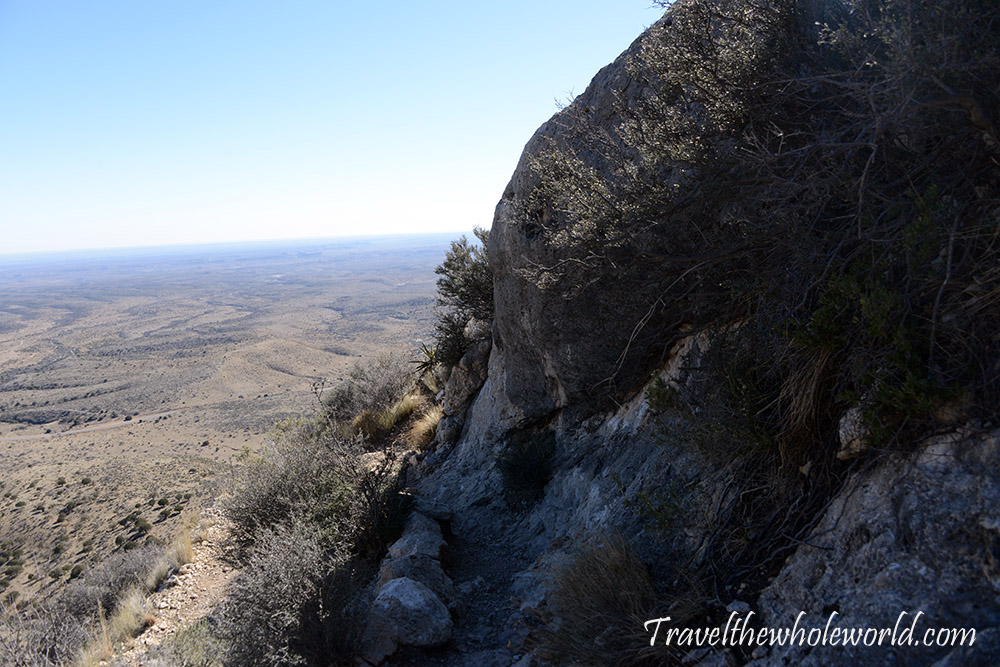 The hike early on wasn’t too exciting. You actually immediately begin climbing up some annoying switchbacks without any views. The switchbacks weren’t especially steep or anything, but without being able to measure your progress it didn’t feel like you were accomplishing much. When I was close to 7,000 feet (2,100 meters) things got a bit better. Instead of dry plants and terrain there were some large rocks thrown about, some even providing a nice break from the sun. Looking back from here, I could see some of the annoying switchbacks below. 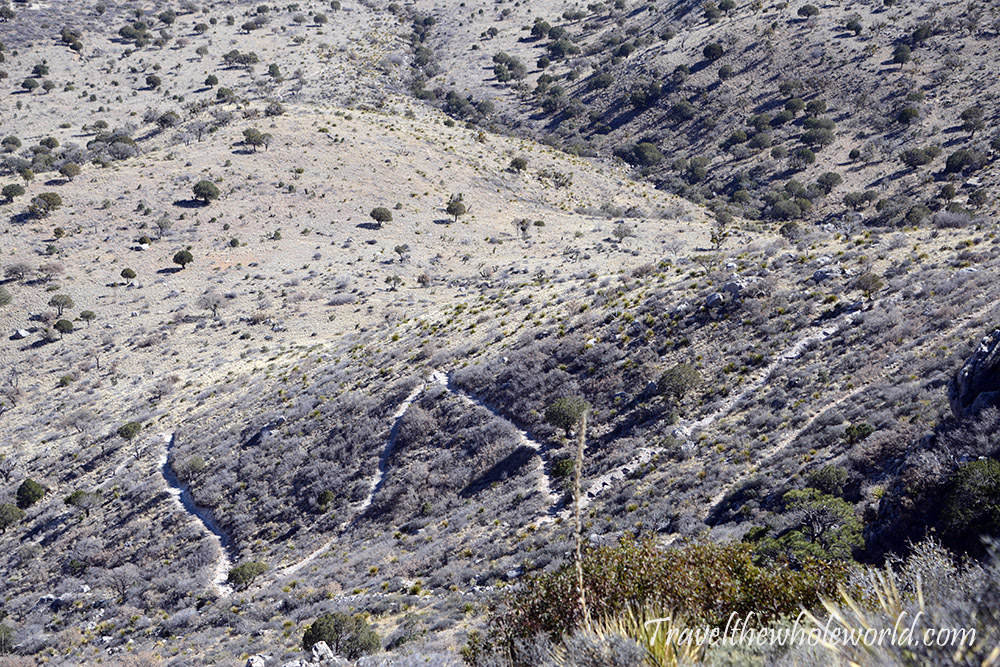 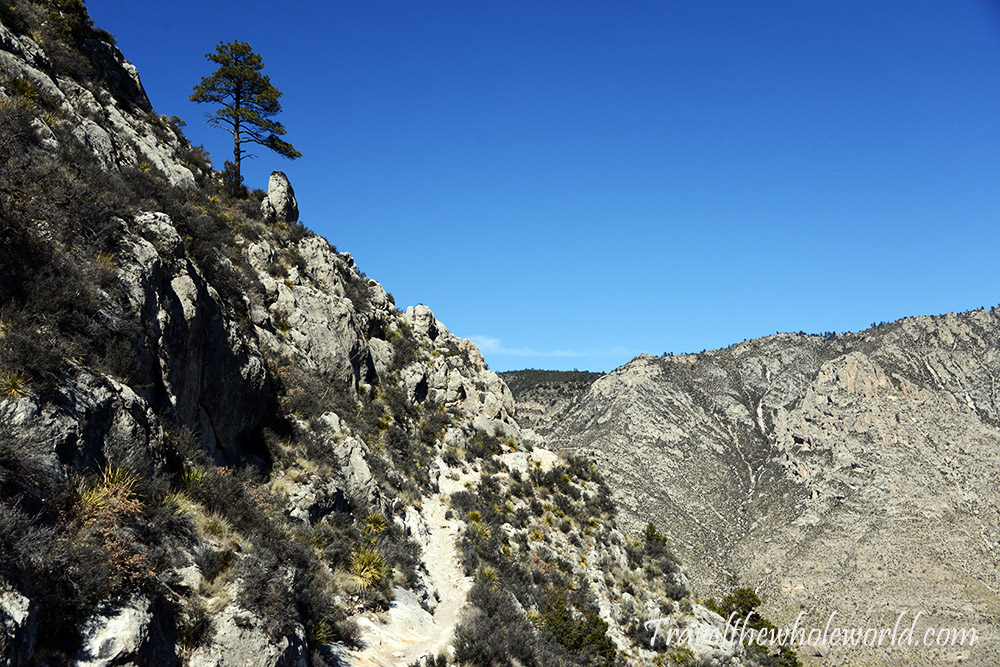 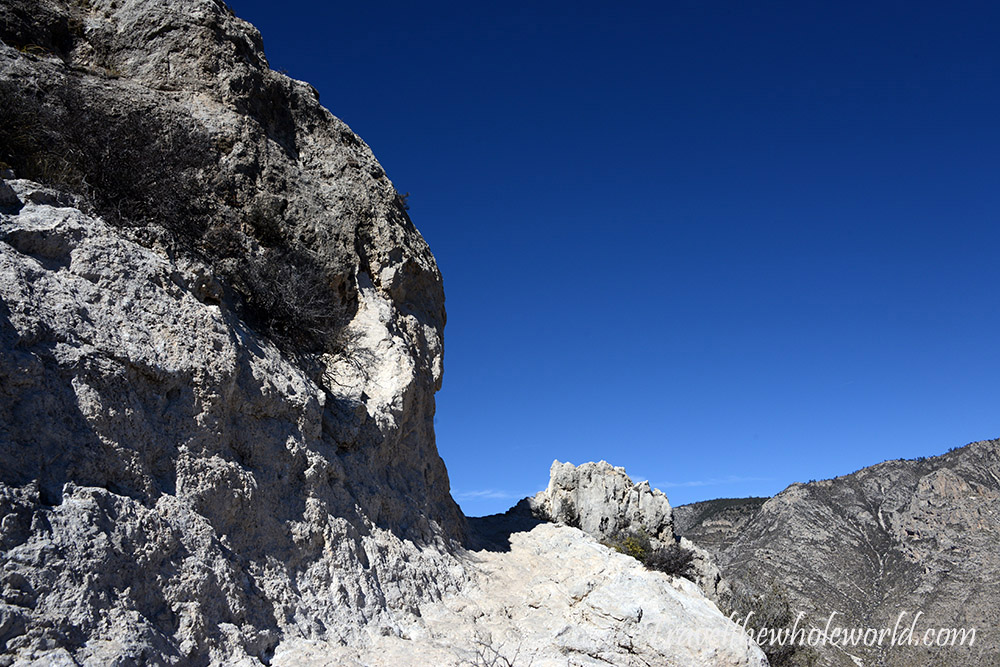 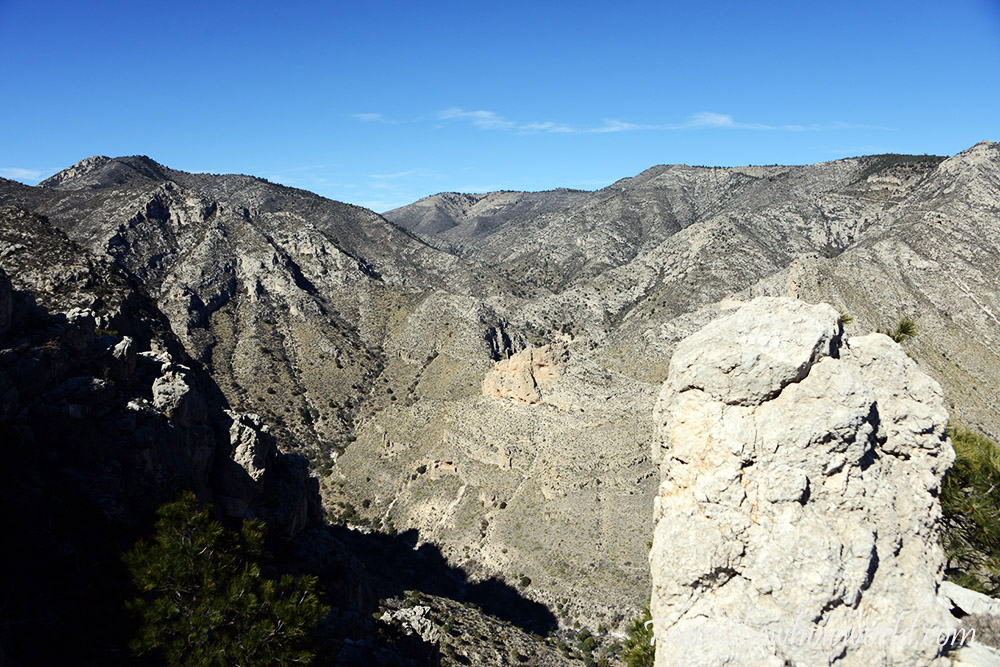 Honestly, this view from roughly halfway up was one of my favorites. I think I did a decent job with this photo, but a panarmoic would have been required to properly show the entire view. The trail suddenly made a hard left, and a small rock outcrop made itself impossible not to climb. From here I could see a giant bowl between all the surrounding peaks. 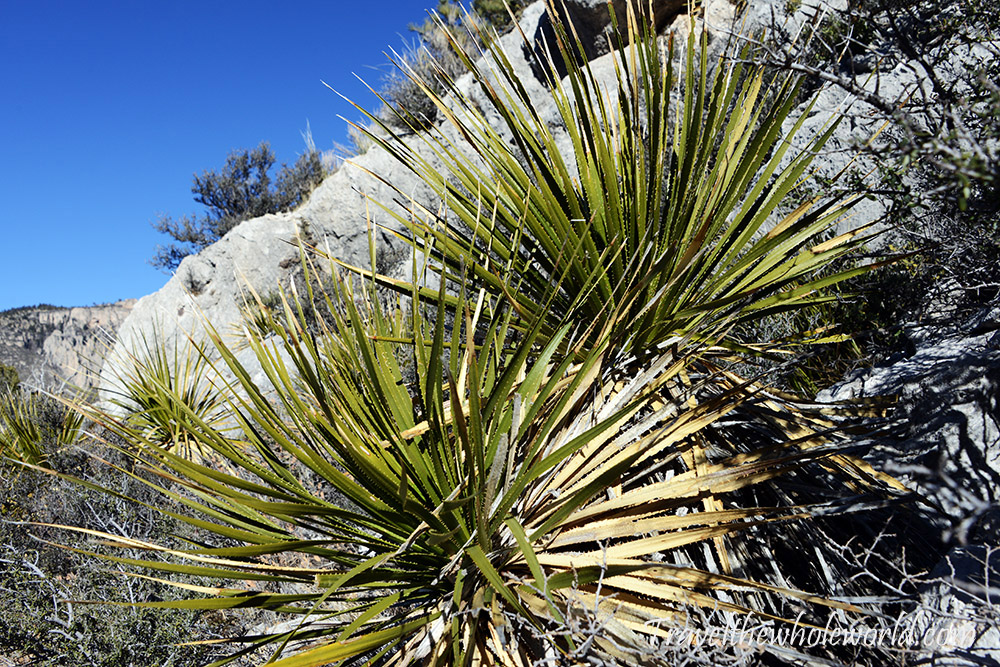 I wish I was paying more attention to the plants, but I’m pretty sure there weren’t any more cacti after an hour of hiking. These guys above seemed to be pretty popular. 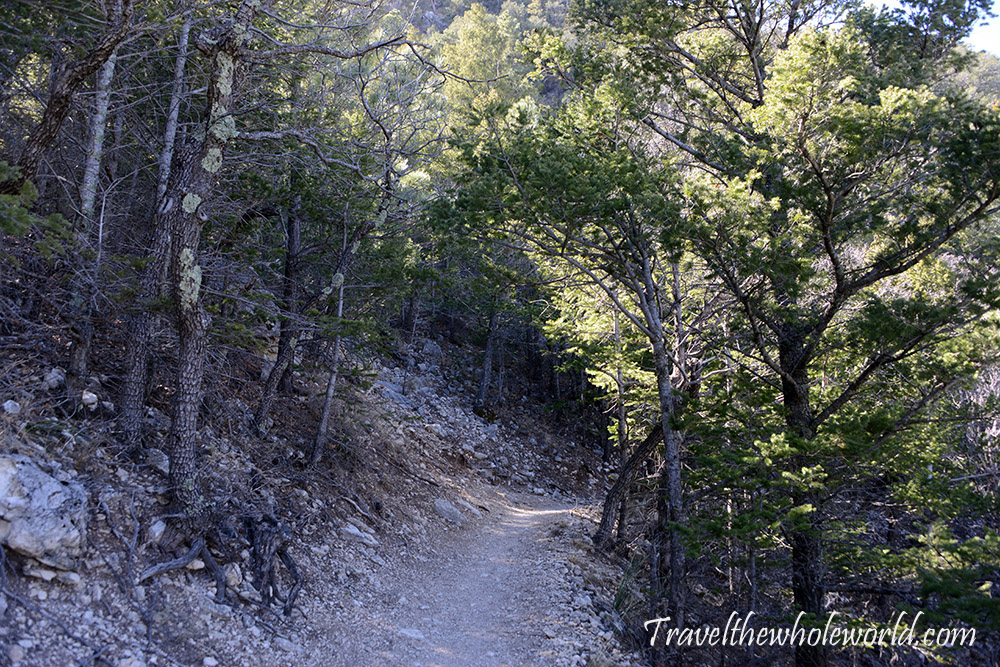 What I wasn’t expecting was this forest. Slightly after the halfway point I entered these woods of pine trees, some of them looked to be over 30 feet (10 meters) in height. They provided some shade, which gave protection to something else I wasn’t expecting, ice! I’ve seen plenty of photos of Guadaloupe Peak with snow on the summit, but things seemed so dry when I started off I didn’t expect to see any snow or ice myself. 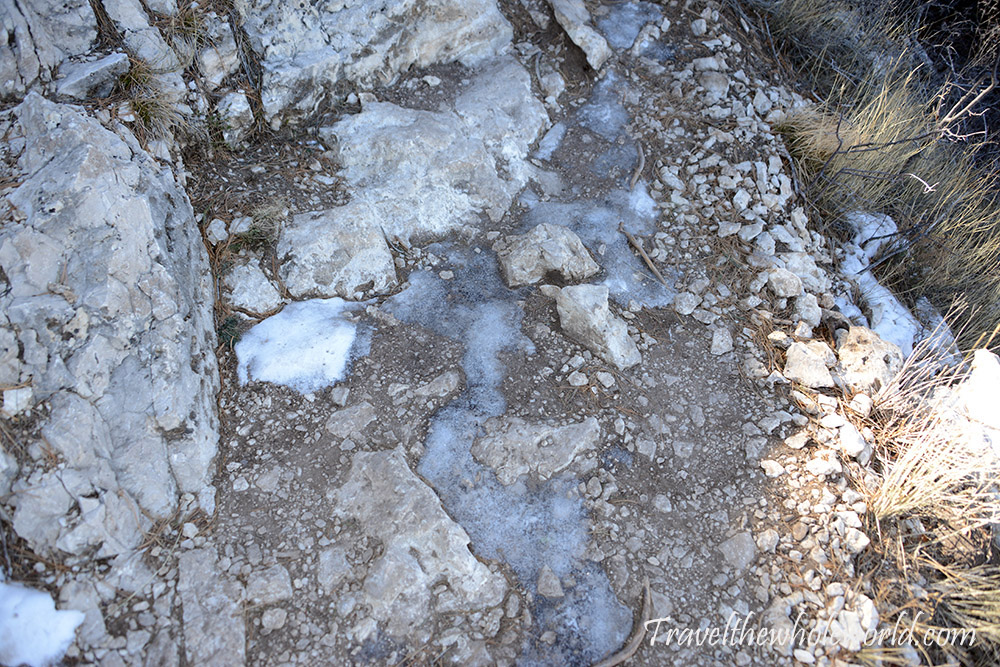 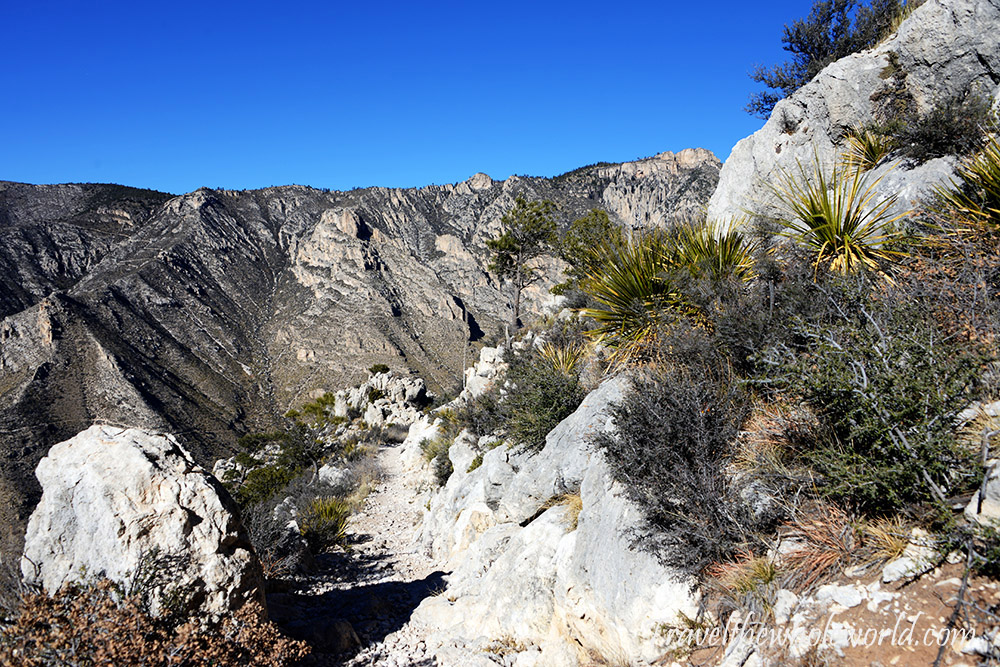 Before I got to 8,000 feet I came up a short section of the trail that had some steep drop offs. It’s impossible to fall since they built a bridge and there is plenty of room on the trail, but nevertheless I didn’t appreciate it until I looked back. 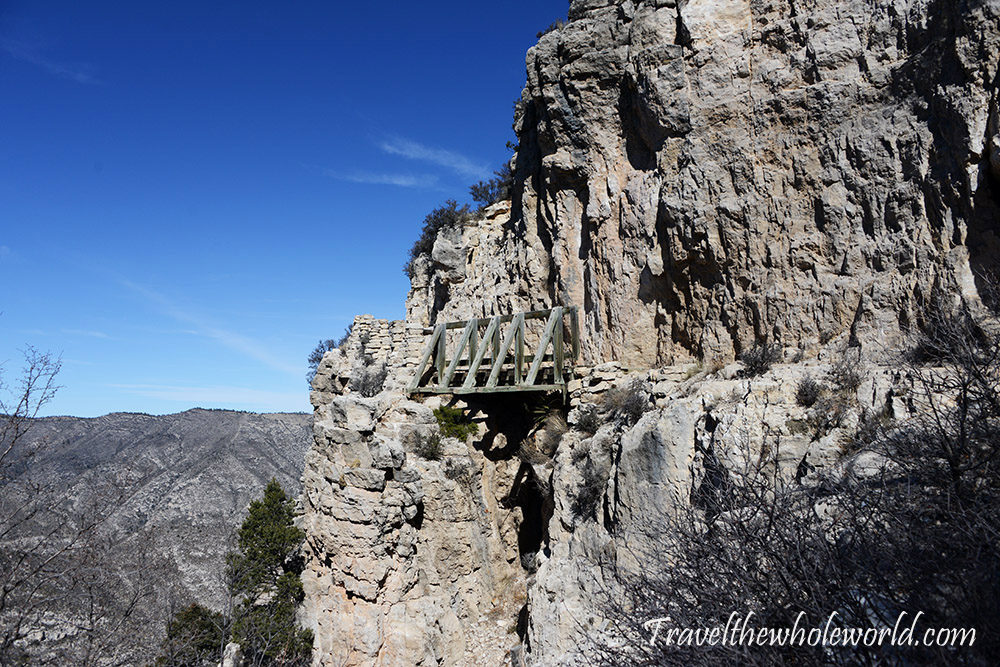 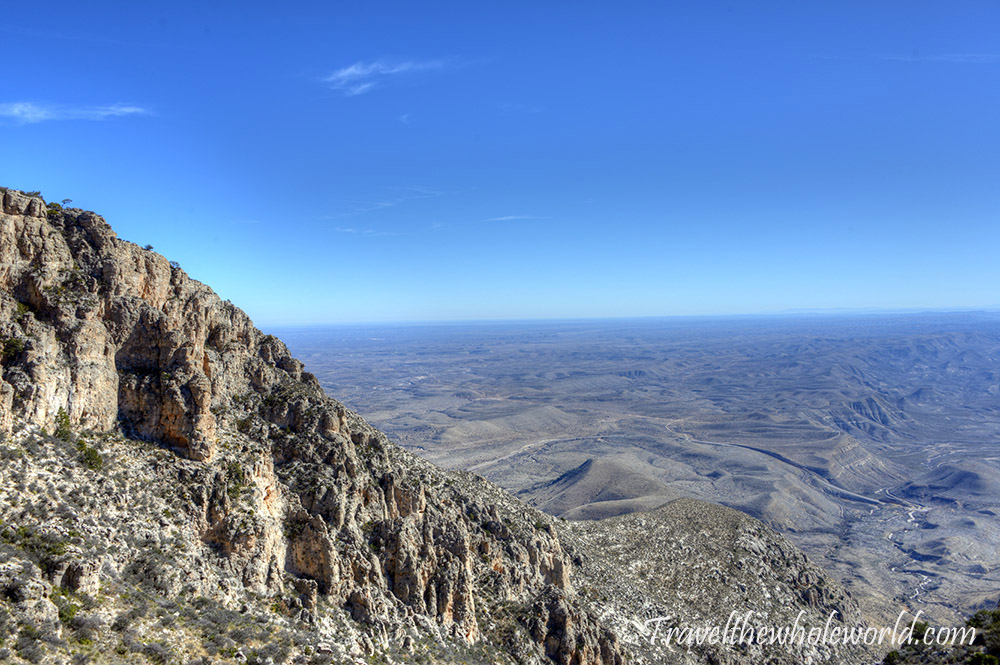 By now I was getting close to the summit, and I could see much further out than before. Around 8,000 feet (2,450 meters) I had yet another surprise. The photo below shows where the trail turned flat and looked more like some sea level plains rather than just short of a mountain top! 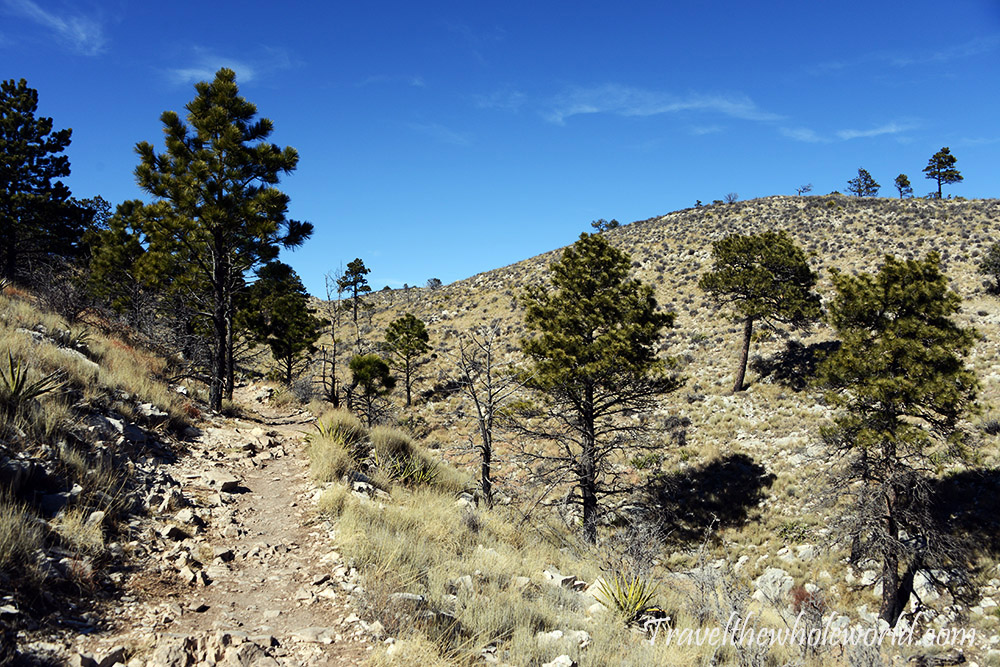 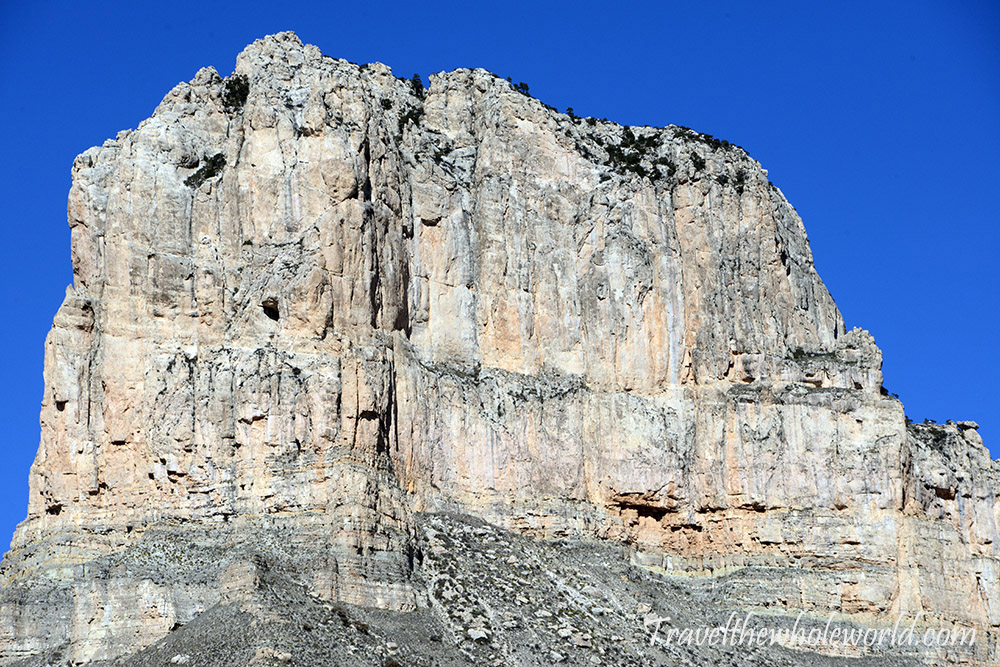 After a few more switchbacks the summit was in reach. The trail had been obvious the whole route, but just before the top there seemed to be a few options so I just made my own direct trail to the summit. The view was one of the best mountain views I’ve had in the United States. Another famous peak just by the summit is El Capitan. This photo above was taking from the road below, but I’m adding it here so you can see the same formation from above. It was hard to believe this was the same El Capitan below when looking down on it from the summit, it definitely looked nothing like I would have imagined! 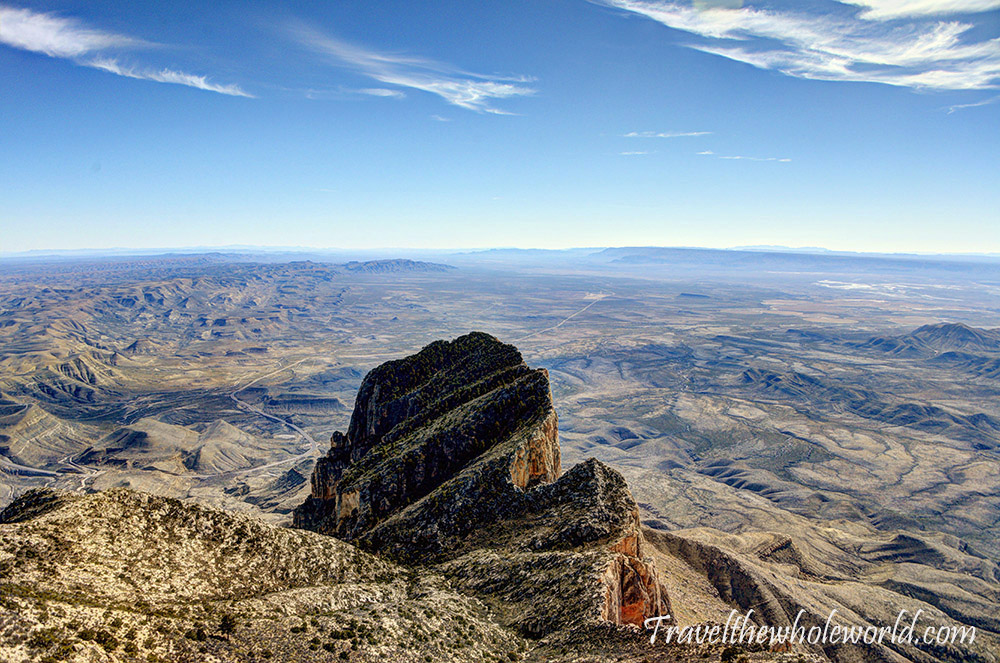 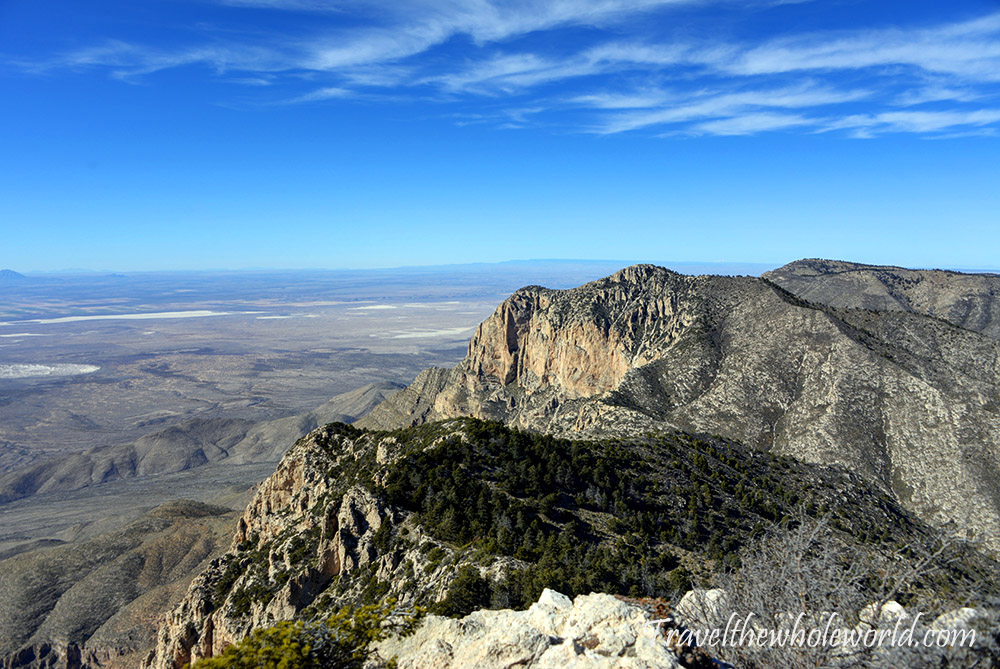 There was amazing scenery in all directions, and aside from the road required to get here there was almost nothing but nature as far as you could see. The lighter patches you see in the distance are actual salt flats, which can be seen in my first photo as well. 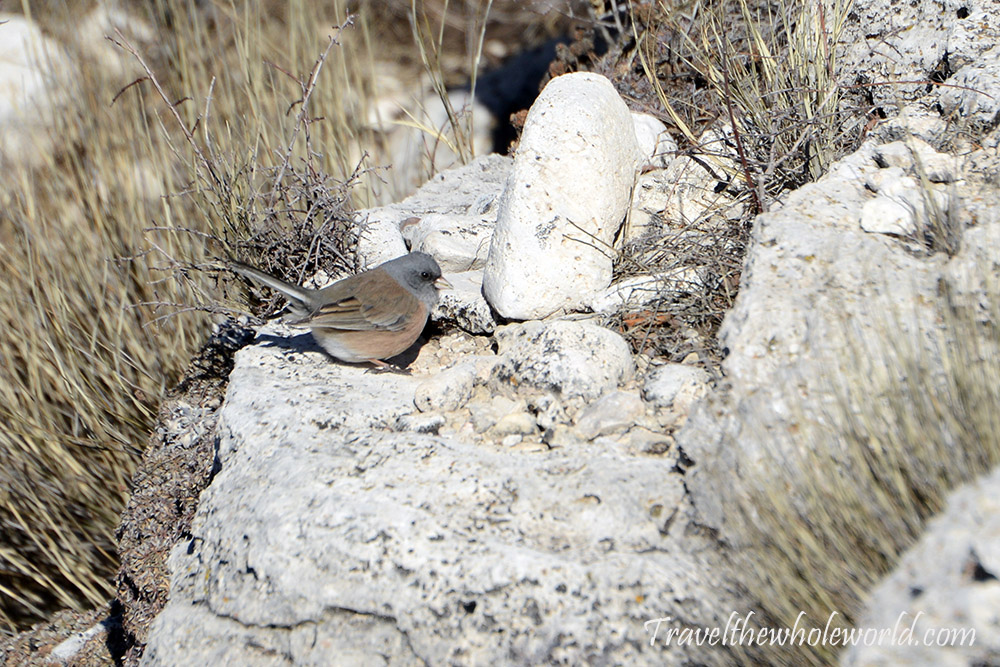 I had hiked alone almost the entire time, but just below the summit I met up with two other small groups. Aside from us and some birds who had cheated and flown to the top, we had the whole place to ourselves. Guadaloupe Peak was definitely a highlight of my 50 state high points. Regardless if you have a state high point goal, this should be a mandatory hike for anyone who likes hiking and nature! 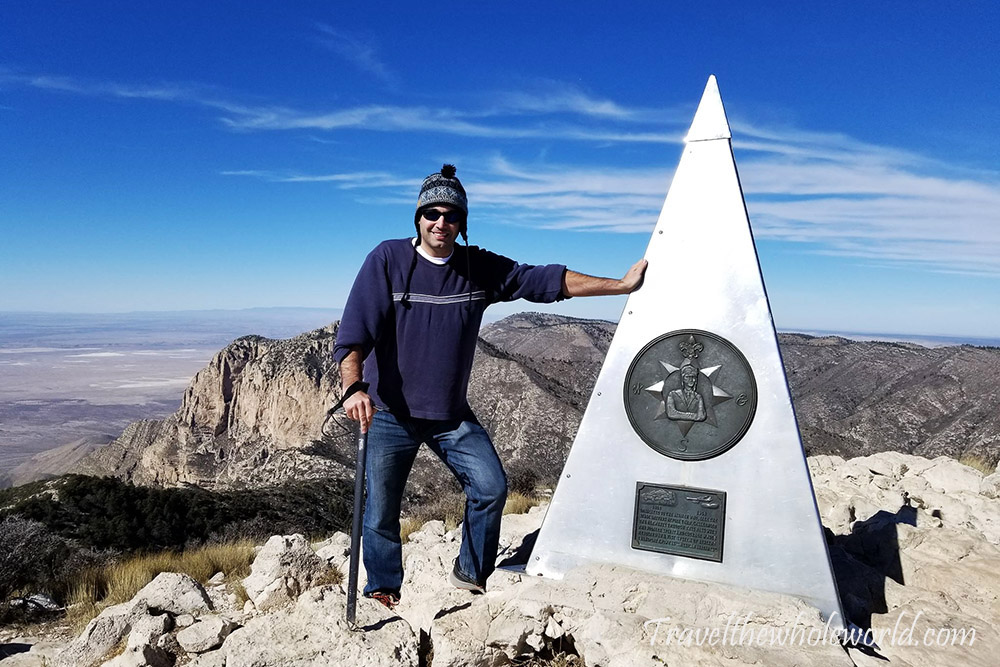