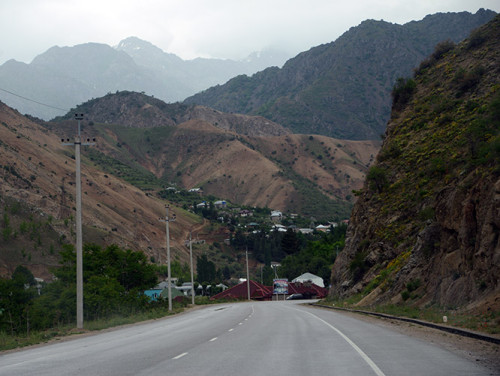 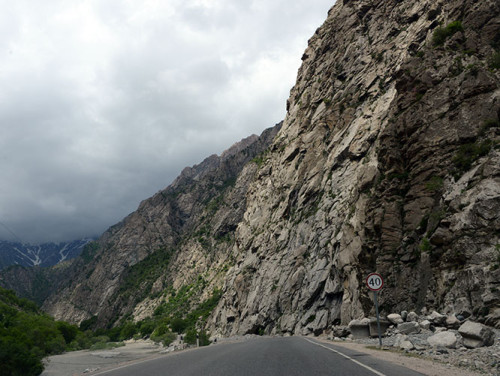 From Dushanbe, I did a road trip north that should have taken 5 hours. Several parts of the road were under construction, so I had a few delays along the way. Since Tajikistan is 95% covered by mountains, you’ll be in interesting territory as soon as you leave Dushanbe. 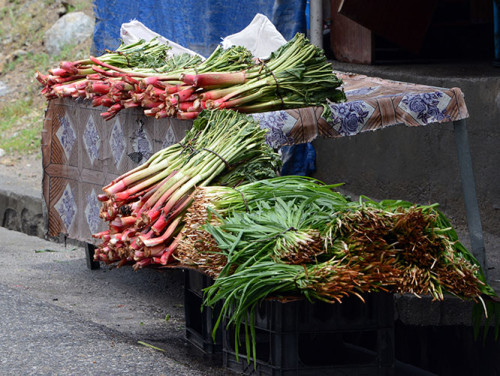 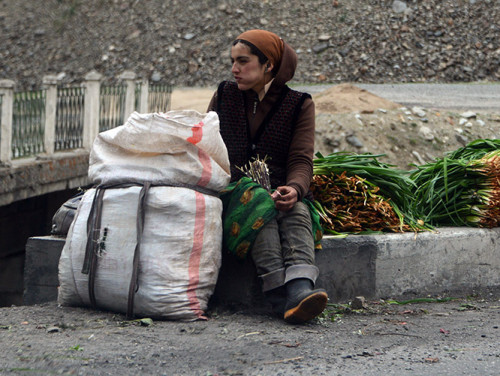 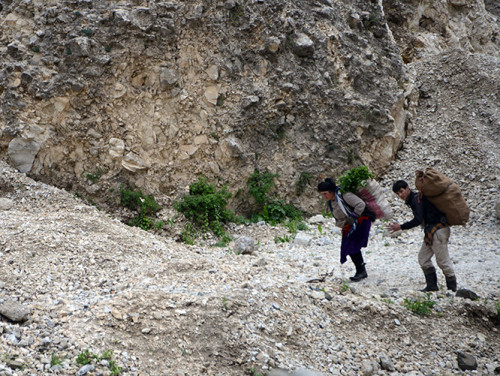 Along the highway I often noticed people selling these plants on the side of the road. It wasn’t until I later did some hiking that I was able to taste them when a local that I was with found some on the mountain. The lower stalk just after the red part is what’s edible. Surprisingly the plant had a ton of flavor in it. I thought it tasted like a semi-sweet piece of celery with some Parmesan cheese! 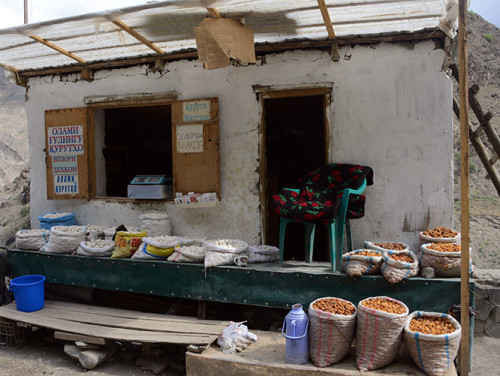 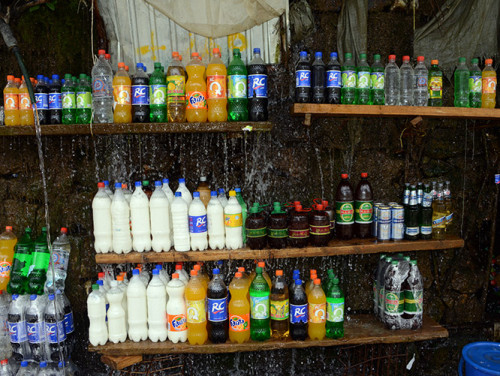 If the Parmesan celery plant isn’t your thing then there’s no need to worry. The road trip north passes along plenty of small towns with gas stations and food items for sale along the way. This shop here had some dried fruits and nuts for sale, and their own naturally cooled drink selection. The drinks were all placed under some ice cold water flowing down the mountain. 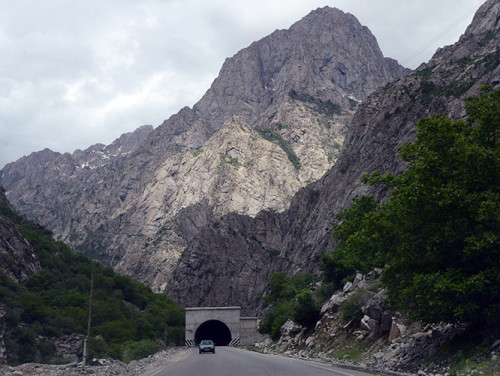 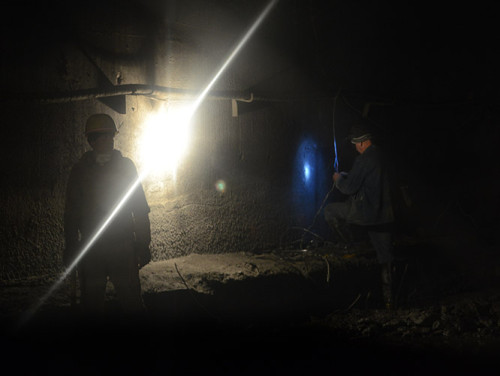 While you head north from Dushanbe, you’ll occasionally go through short tunnels under the mountains. Most of them are pretty short, but the infamous one is actually about 6 km in length! I was told it was built by Iran but never finished. Chinese companies refused to take on the project since they weren’t the ones who hadn’t started it, and the Iranians supposedly would say they will continue the work but never do. There were some workers in the tunnel, but it was so dark I couldn’t even tell if they were locals or from another country. Most of the tunnel looks like the two photos below, with pitch black darkness all around you and some roads in extremely bad conditions. Despite the good weather outside, most of the tunnel was raining which formed puddles over the giant potholes. Some of the potholes were extremely deep, and there is no way to tell how deep until you drive over them. Even though I did this drive in a jeep, one of the pot holes suddenly dropped a wheel down so low that the chassis of the vehicle made a nasty grinding noise against the pavement. 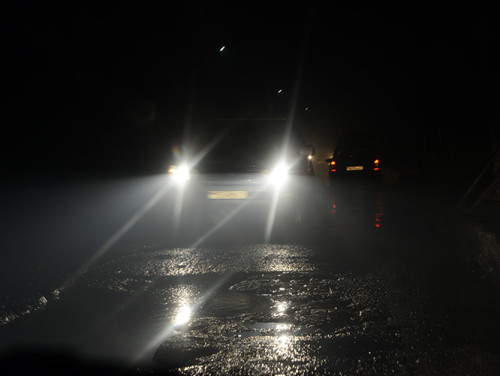 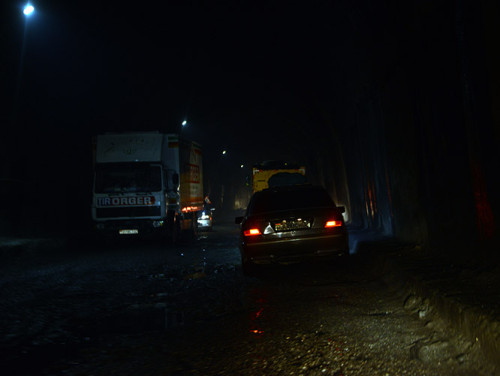 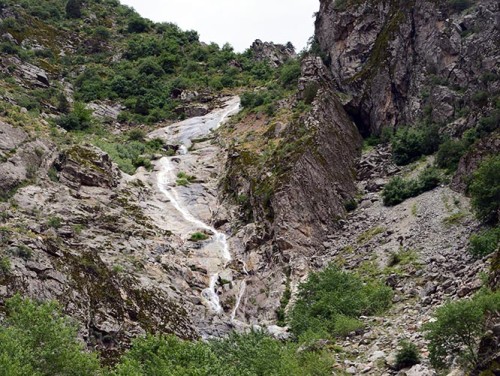 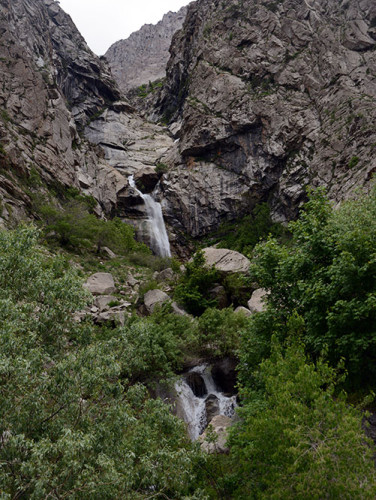 The entire trip passed by mountains and waterfalls. Even though the distance was short, the mountains seemed to have a variety of shapes and colors. Above are two waterfalls along the highway, below are some of the types of scenery you can expect. The first photo on the lower left was taken not too far from Dushanbe. You can see the mountain is green and covered with vegetation, while later on other mountains we came across were colorful, but dry and desert like. 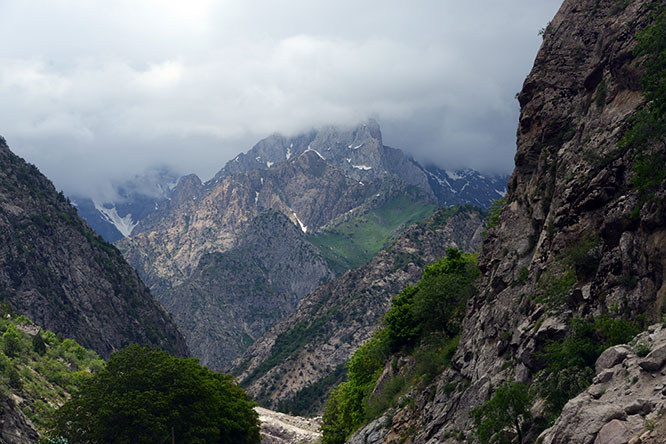 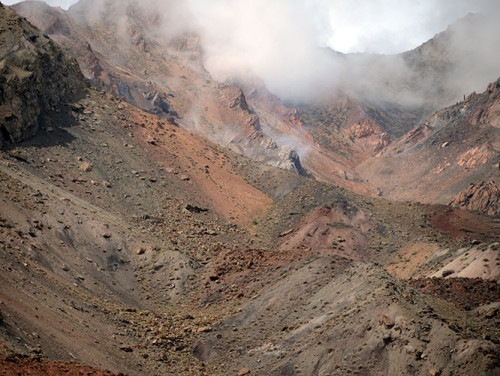 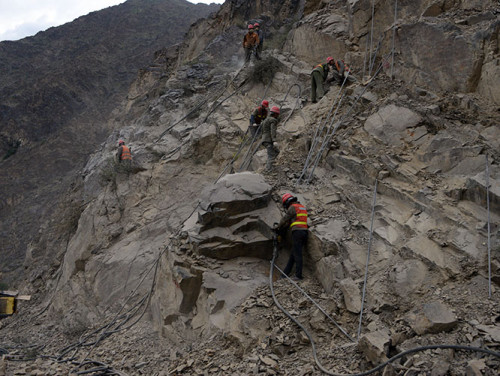 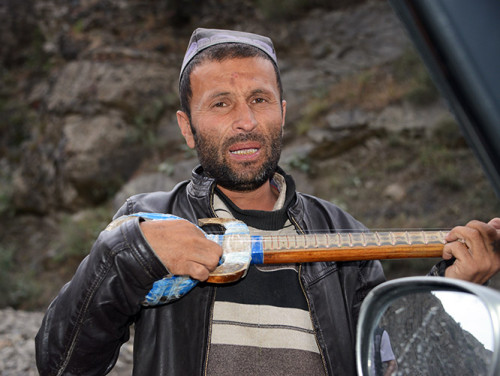 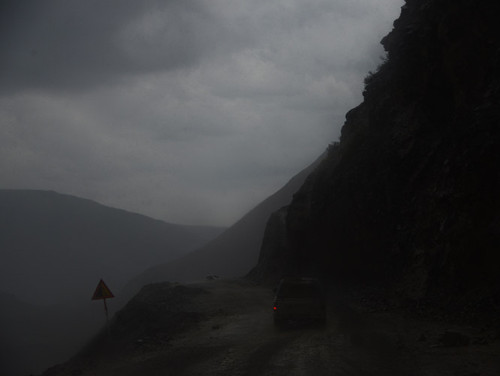 Enjoying the scenery was what made the road trip so fun. This all ended after we hit our first Chinese construction road block. The first one only lasted about 15 minutes or so and then we were on our way. The next road block took seriously almost three hours. It seemed to be a very inefficient process as far as letting people go. At one point an angry mob almost formed and someone who said his mother had passed away was allowed to drive past about halfway through the 3 hour wait. There weren’t so many cars waiting to begin with, so if one person could pass I don’t see why they didn’t stop work for 10 minutes to let traffic clear out and continue about their business. Some people thought the same thing and for a short period of time I thought an angry mob was going to form. Above is a photo of some Chinese workers laying cables on a hill. After the long road block, we came across this guy on the right who ran up to the car to sing a song and help makes us feel better. The last part of our drive was done during a rainstorm, and we didn’t arrive to Panjakent until darkness. 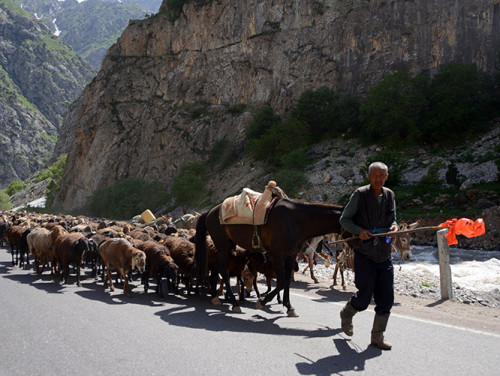 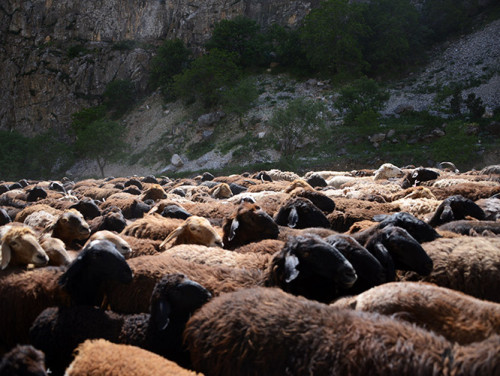 On the return back from Panjakent to Dushanbe, I passed this sheep herder in the road. I have no idea how many sheep he had, but it was definitely the most I’ve ever seen being led by someone. Somehow he kept them in a very tight group, and there were so many that when I was passing by the middle it looked like a sea of sheep.