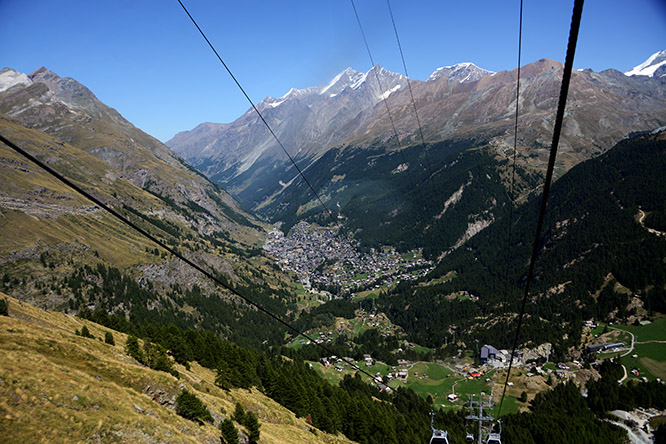 When I visited the south of Switzerland, my main destination was the city of Zermatt. Zermatt is a famous mountain resort located at 5,310 feet (1,620 meters). I had flown into Milan, Italy on this trip and after the airline lost my checked bag I spent the day waiting for it in the airport and missed my train. When it finally showed up at 11pm, I ended up renting a car and driving, not getting to the Zermatt area until it was 3am. It was then that I found out cars are not allowed in Zermatt, and I had to park in a neighboring town and take the train at 8am! My guess is they want to keep Zermatt’s charm and avoid traffic, which is understandable. The pay off however, was the town below called Tasch has been converted into a giant parking lot. There are a few vehicles in Zermatt by special permission I assume, but otherwise you’ll have to walk everywhere. There are a dozen other different mountain lodges and endless trails to explore in the summer. Some are only a few hours away while others are more then a day. Taking a ski lift is also a good option to get from place to place. This photo here shows Zermatt from above. 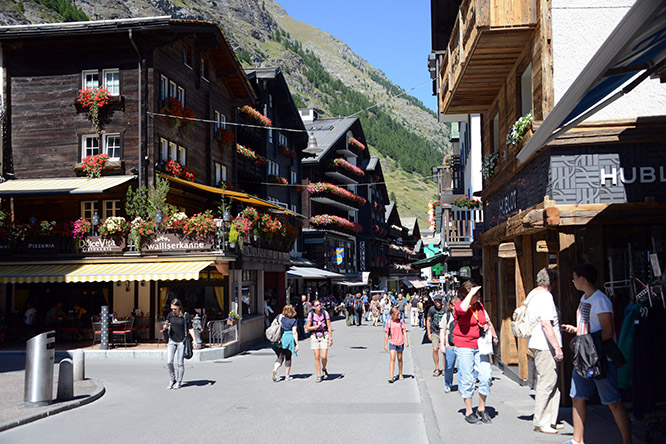 I had just been to Colorado’s Aspen two months prior to visiting Zermatt. To me Aspen seemed to be Colorado’s version of Zermatt. While Aspen has great mountains and is much higher at 8,460 feet (2,405 meters), it lacks the dramatic mountains that can be seen from Zermatt. Both cities are very expensive and have a nice downtown area with lots of fancy restaurants and accommodations. Above is the city center of Zermatt, below is a photo of a restaurant. 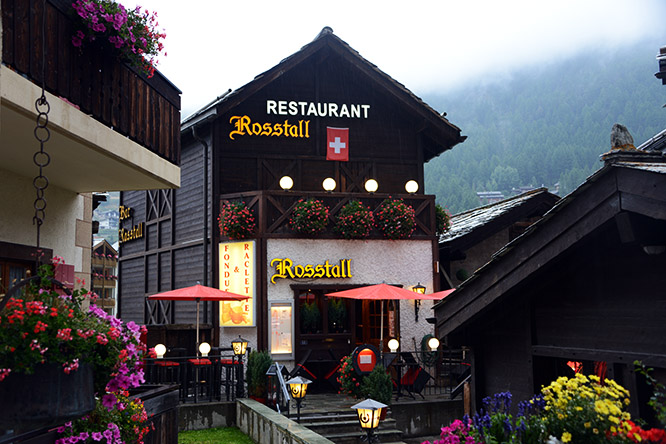 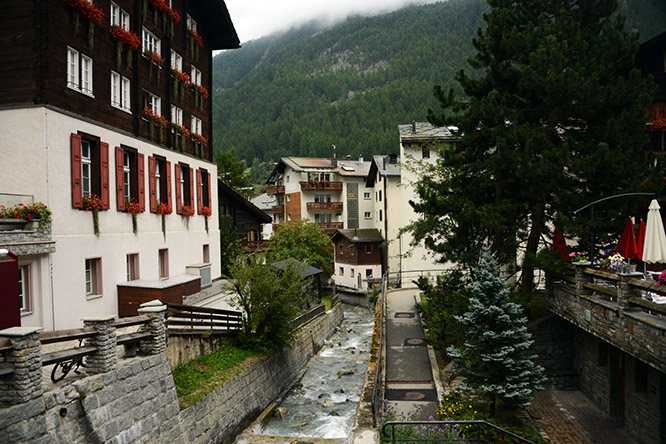 Glacier runoff from the mountains creates a fast moving river that runs through Zermatt. While riding the ski lifts I got to see the source which was a giant glacier that seemed to span for several miles. I imagine this thing freezes in the winter time. 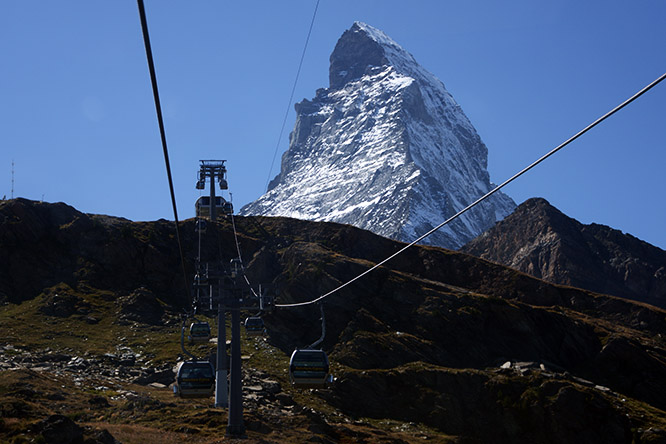 The reason I had come to Zermatt was to attempt the Matterhorn. This was the first mountain I had ever tried and didn’t make the summit, and the reason was for bad weather that had rolled in. Click here to see my other page on the Matterhorn that is dedicated to that adventure. The photo above shows one of the views as you approach the giant mountain on a ski lift. Ski lifts can get you about a two hour away hike from the base of the mountain. 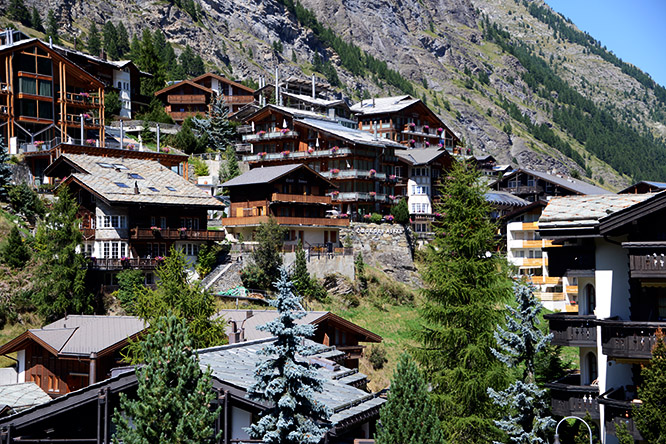 My first day in Zermatt was filled with clear skies and sunshine, but because bad weather was rolling in that would last a week, my friend and I had no choice but to attempt the mountain early. I ended up locking up all my non-essential gear which included my camera, and so I don’t have too much else to shower from the city. I did get some photos of the beautiful houses they have here however. These are seen all over the country, and it’s another reason why I think Switzerland is one of the most scenic places in the world. 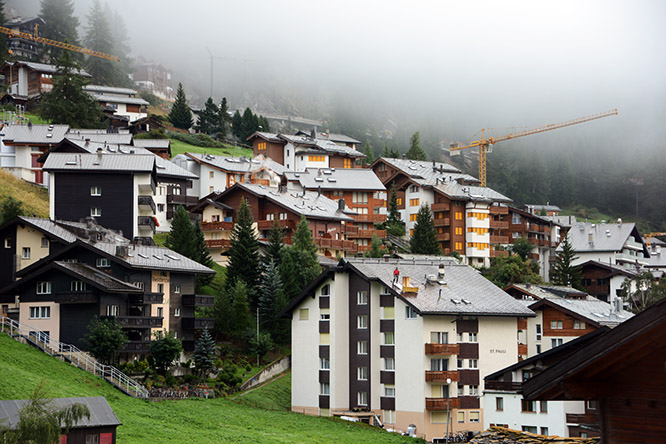 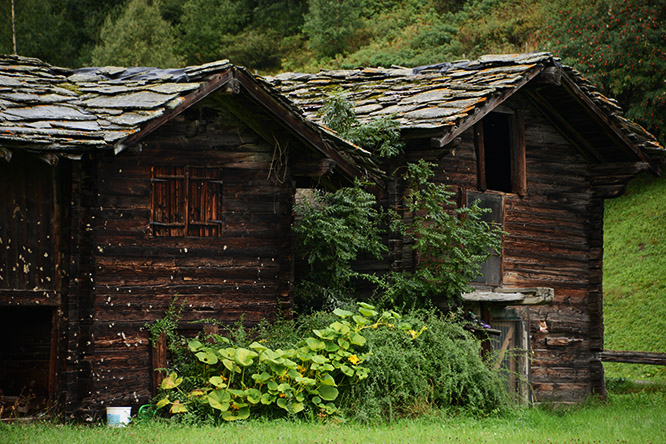 Throughout the area around Zermatt I saw lots of abandoned cabins like these guys above. Most of them were at higher altitudes, probably in places that became inconvenient to live once modern roads and other infrastructure was introduced in the area. I have no idea how old they are, but imagine they’ve been around for a few decades. This is probably the one place in the world where abandoned structures don’t ruin the scenery! 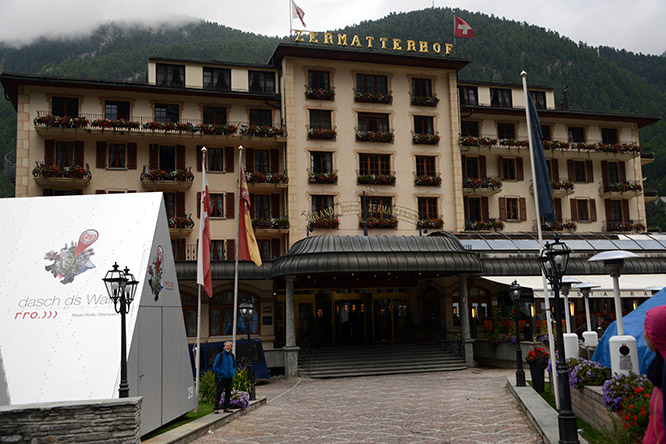 Zermatt is a pretty expensive place, so if unless you plan to camp or break into abandoned cabins you’re going to pay well over $100 a night for a room here. My friend and I split one that cost over $125 a night and that came with shared bathrooms! I’m sure some of these hotels like the one above must cost hundreds per night. 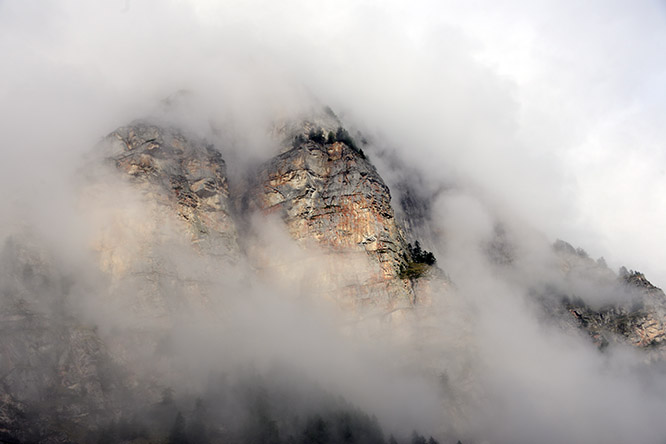 The Matterhorn gets all the attention as far as scenery goes, but even the low altitude mountains here are beautiful, especially when clouds are rolling in. 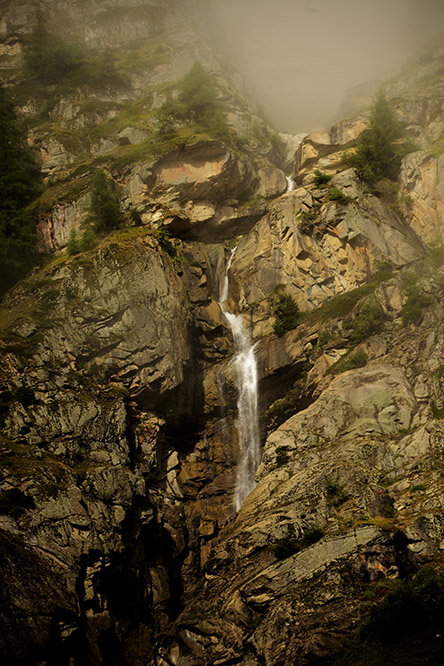 I’ve no idea what the name of these falls are, and since there are so many in Switzerland I wouldn’t be surprised if it doesn’t have one. I saw dozens of them in the area, and this one above was actually off the main road so you didn’t even have to hike to it! 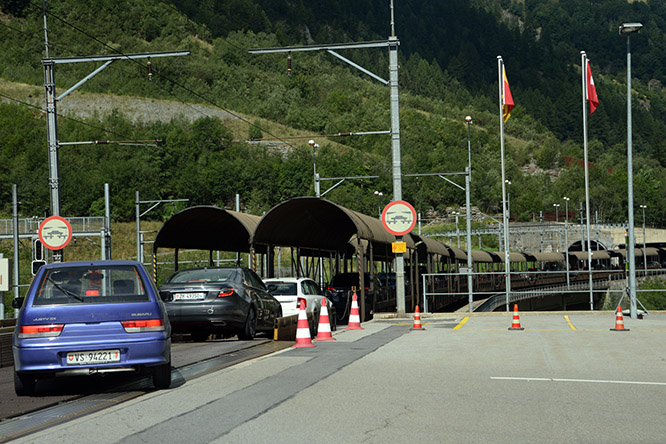 When I left Zermatt my drive through the alps was another mini adventure in itself. At one point I paid 27 Swiss Francs, or about $30, and got onto what I assumed was a toll road. After driving around a corner I realized my car was taking this train under the Aletsch Glacier, the largest in all of Europe. 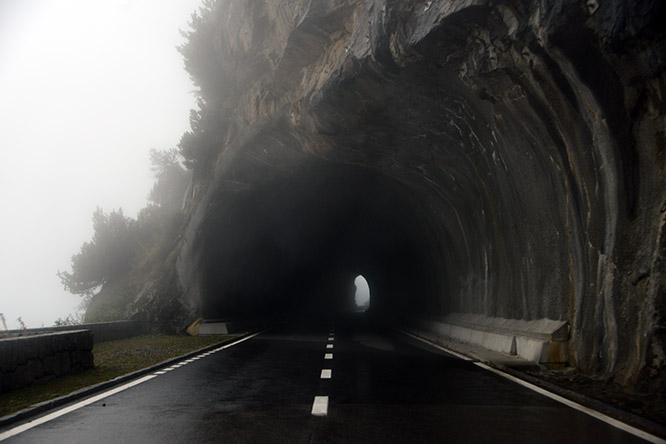 Later while driving in other directions, I drove as high as 8,000 feet (2,400 meters), passing exposed passes and going in and out of tunnels. The roads where sharp and windy and a bit annoying. The highest point took me through a mountain pass where this helicopter is parked, waiting to go on a rescue mission I assume. 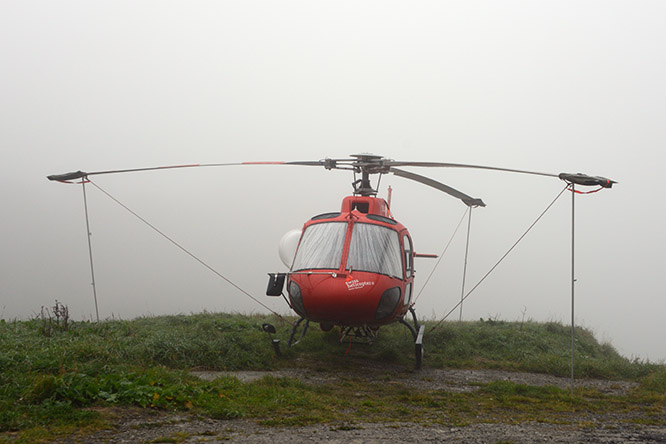 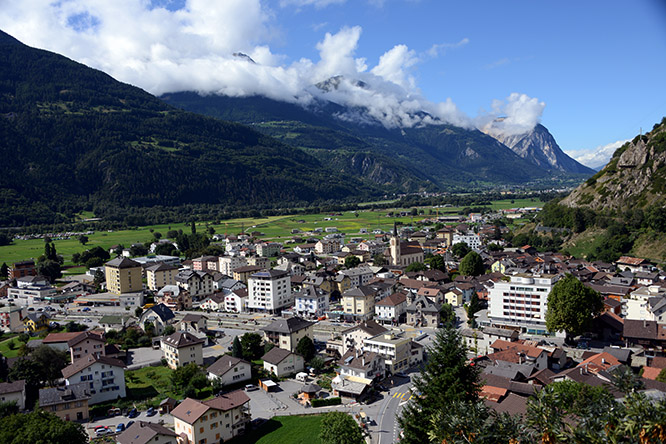 Lastly, less than an hour from Zermatt as I was driving up higher into the mountains, I came across this town. The random town of Gampel-Bratsch is one of the most scenic sights I had seen on this trip.