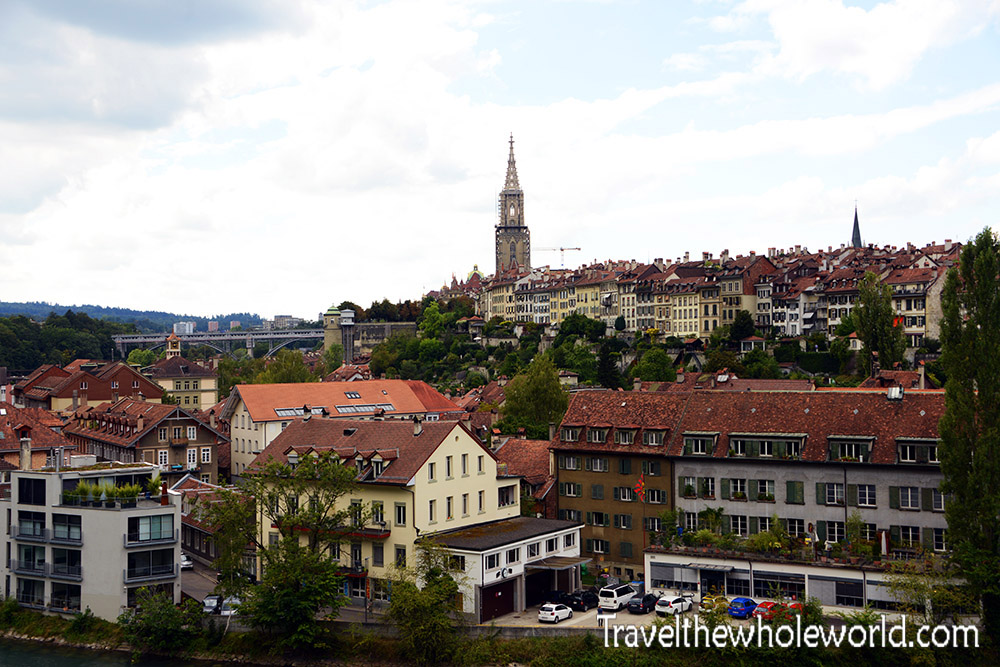 Bern is the capital of Switzerland, and along with Zurich they are the only two big cities I visited while in the country. Both Bern and Zurich are beautiful picturesque places with lots of history. I did find Zurich to have much more to see and do however. Bern is a medium sized city with a population of about 150,000, while Zurich has around 400,000 people. The photo above shows a shot I took of Bern. You can see that Bern has more of the small town charm feel than a big city. 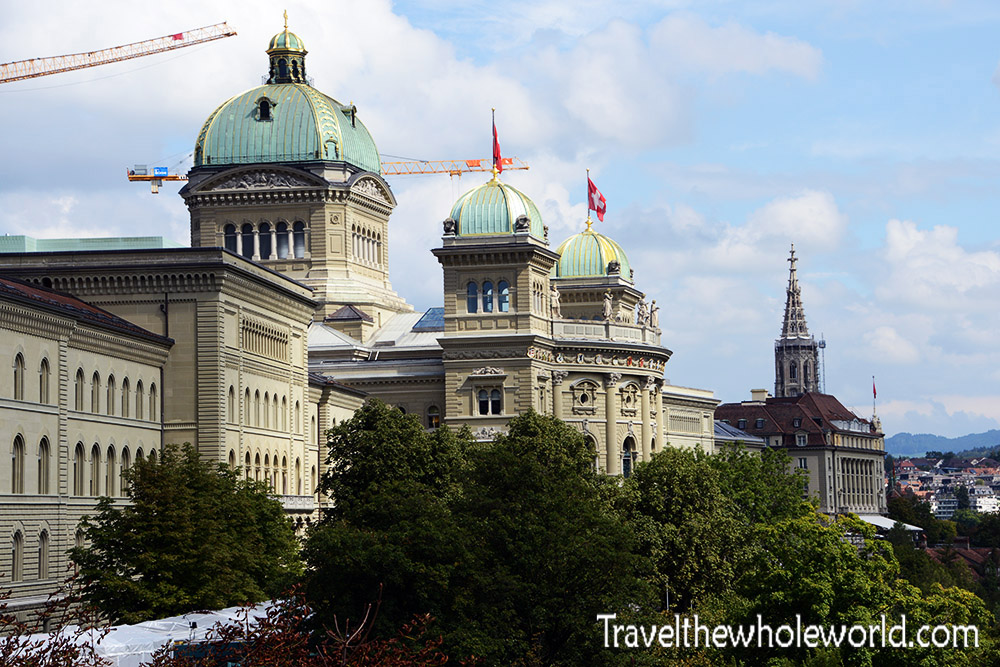 Since Bern is the capital city, some of its most famous sites are government buildings. Above is the Federal Palace of Switzerland. Here both the executive and legislative branches of the Swiss government operate. This photo above is actually of the south side of the building that faces the Aare river. Below is another photo from the Federal Palace. It’s truly an amazing structure and I wish I had taken more photos! 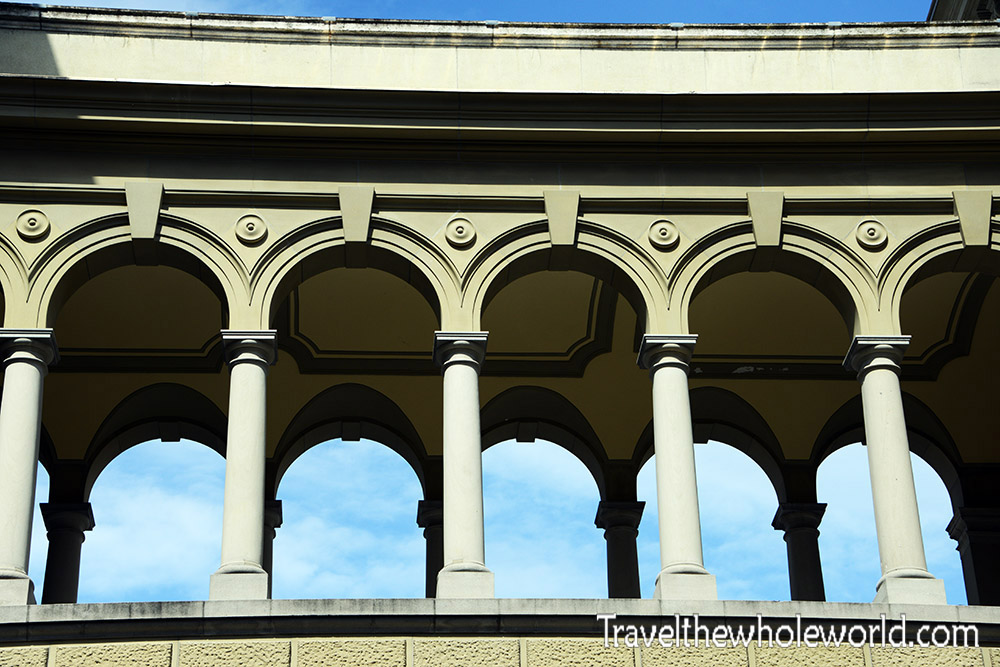 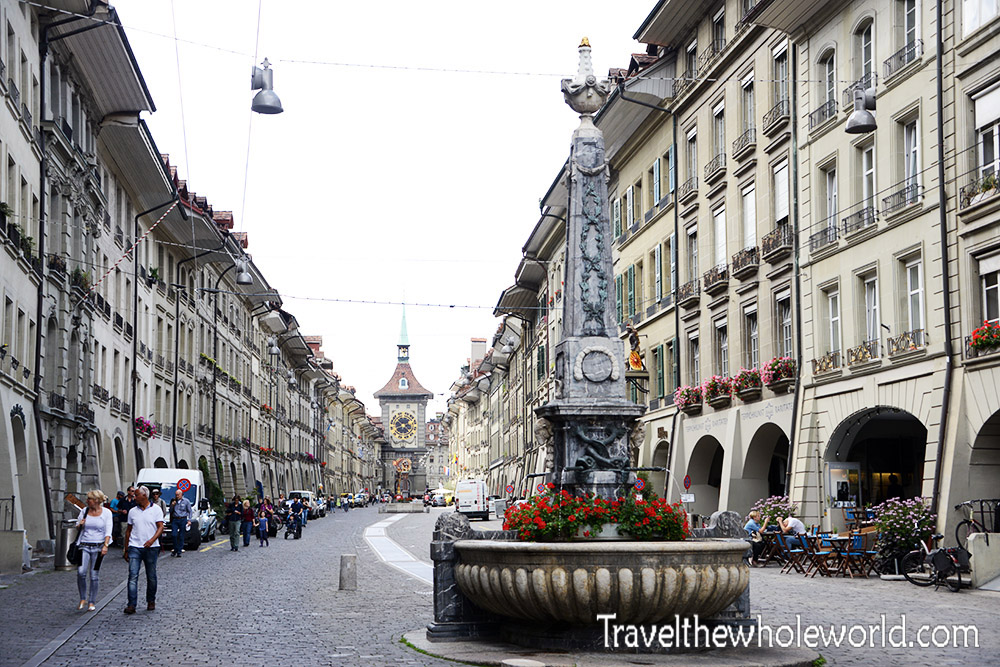 The most famous historic landmark in Bern is the Zytglogge clocktower. Incredibly, the Zytglogge was built originally 800 years ago and is a symbol of Bern. The Zytglogge burnt in the great fire of 1405 and while the clocktower was repaired, it wasn’t fully restored until 600 years later. 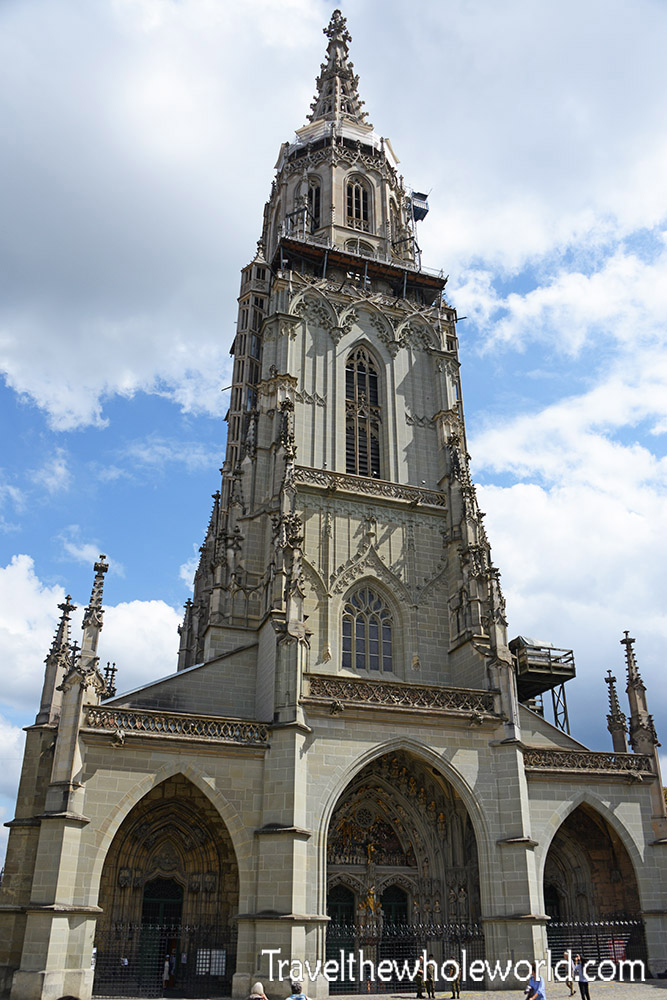 Another medieval building is the Minister cathedral which began construction in 1421. Like many cathedrals of this magnitude, it took hundreds of years to finish and was completed in 1893. The top of the spire reaches 330 feet or almost exactly 100 meters. It is the tallest cathedral in Switzerland. 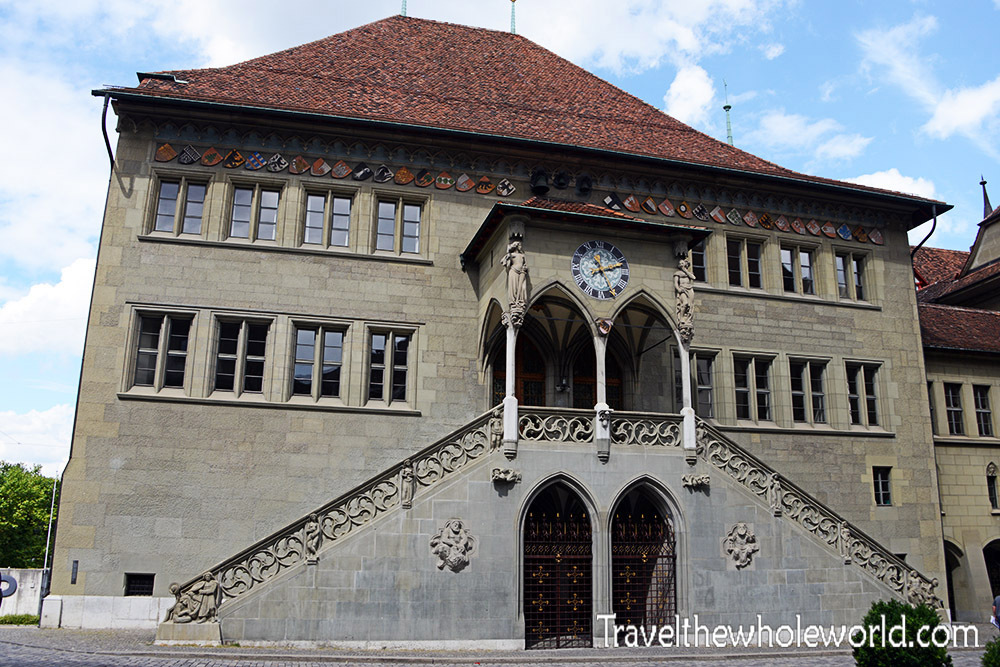 I’ll warn you now that this was a quick trip to Bern and I mostly randomly explored the city on foot. You’ll certainly be able to tell by my photos since they are mostly random street shots that I took. This one for example shows the old city hall or Rathaus as it is called in Swizterland. The city hall dates way back to the 15th century! 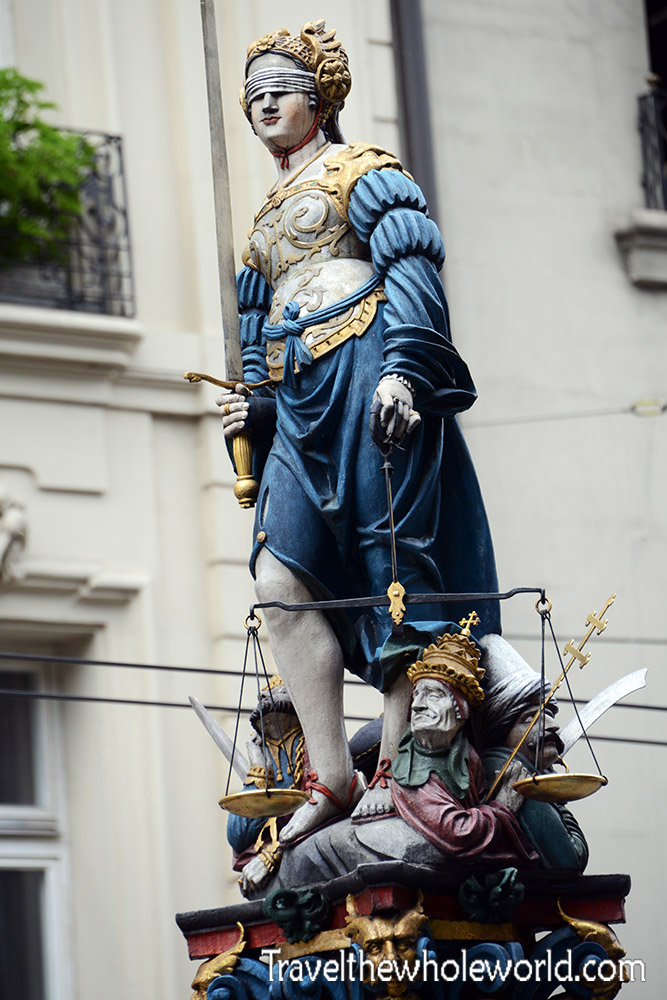 This nearby fountain and statue is called the Justice Fountain or Gerechtigkeitsbrunnen in German. This fountain was created in 1543,and after its creation several copies in the medieval times were built in Switzerland. Today there are just under a dozen, but it’s believed dozens of others could have been created but were lost over the centuries. The faces you see below the statue of justice were of the leaders of the time such as the pope and mayor. The purpose of them at the feet of justice was to show that ultimately justice prevails. With that said I would never ever have any trust in a medieval court system. 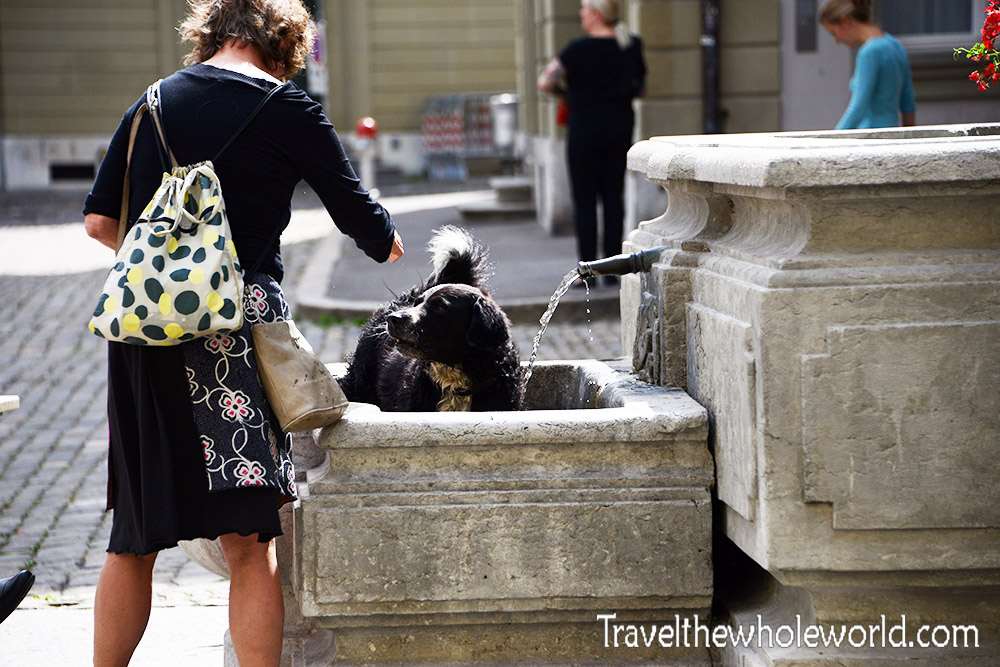 While I’d rather take my chances in a medieval court than an ISIS court, I still would find it hard to believe that anyone would get a fair trail. Maybe I’m wrong but I just imagine extremely harsh sentences for minor crimes and almost zero chance of any court finding the accused innocent. In another nearby fountain a lady even had picked up her dog and let him play in the water. I imagine doing this same act in the medieval times would have been punishable by death. 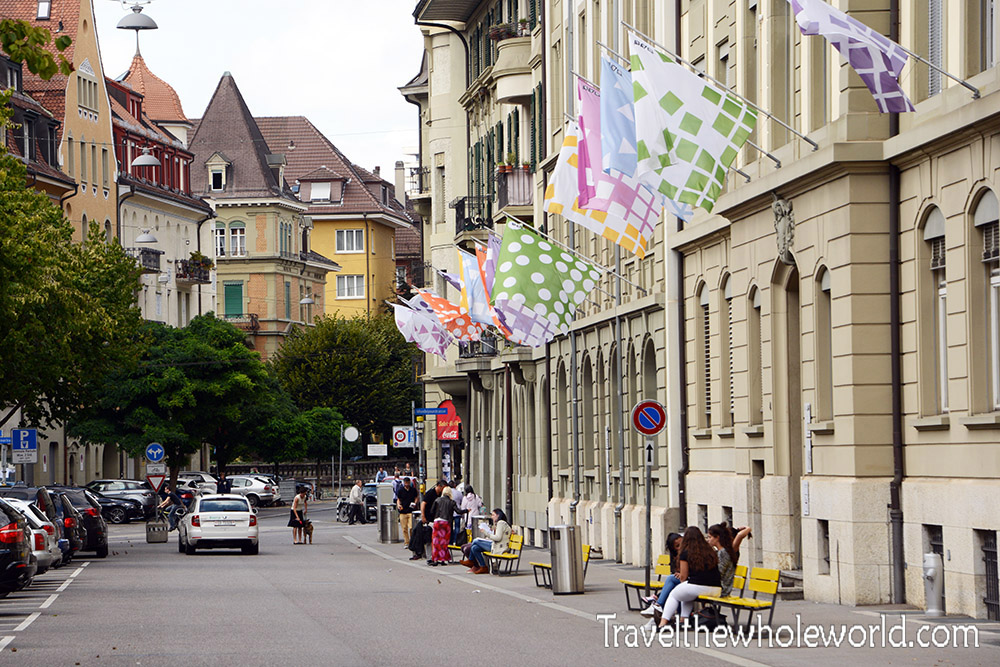 Much of the rest of my day trip to Bern was exploring random parts of the city. This photo is one of those streets I happened to arrive and find parking on. Despite how expensive things are in Switzerland parking wasn’t too horrible. 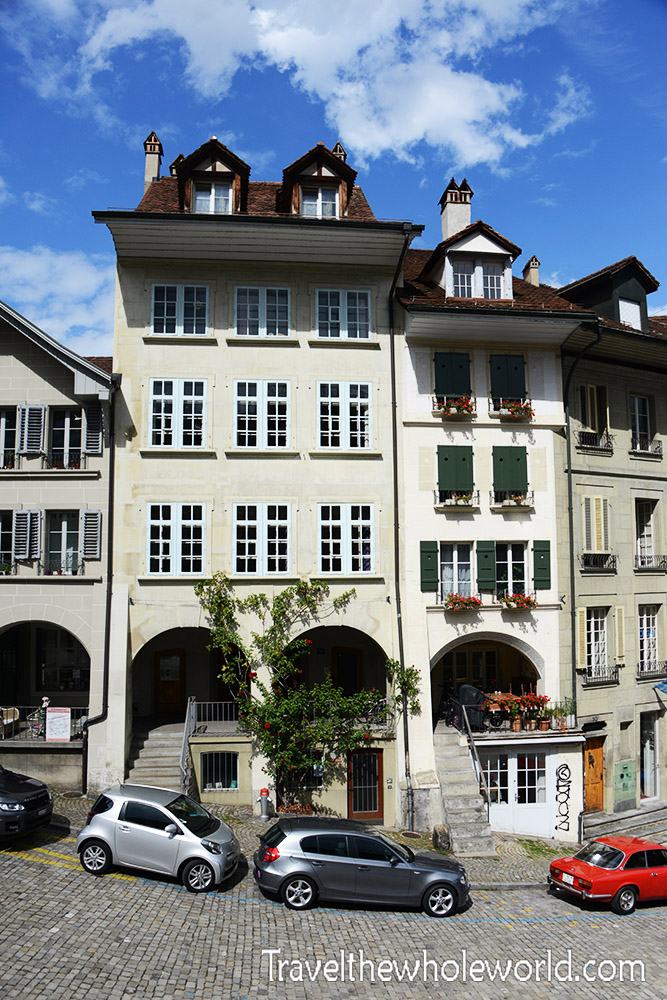 Something I really liked about Bern was the city’s steep streets. I never really thought of Bern this way before visiting, but it’s common sense in such a mountainous country! Maybe because to me Zurich had appeared much flatter and I expected Bern to be similar. Anyway, you can tell from photos like this one above and below the some of the streets are pretty steep but it didn’t stop anyone from building homes along them. 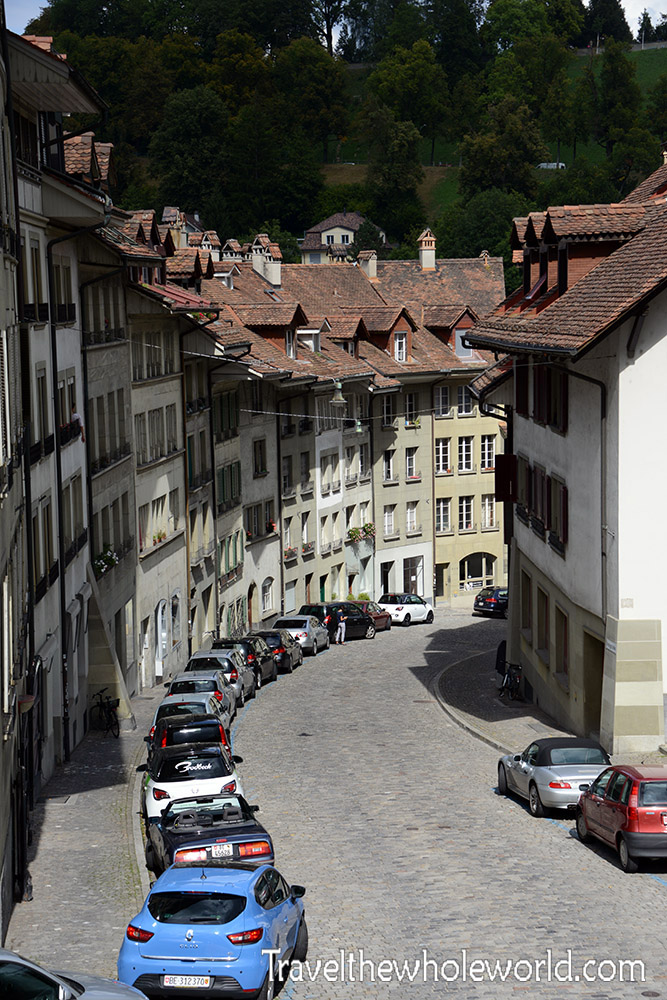 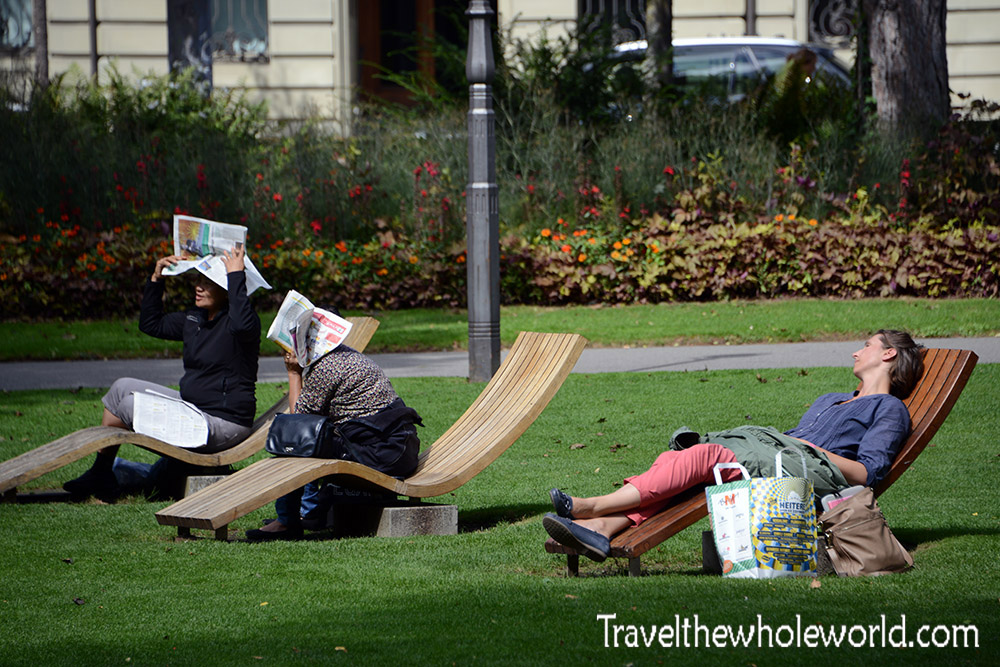 The photo above is a shot I took of a city park I came across. I visited Bern in late August when it was essentially the end of summer and nice weather was coming to an end. I had just went on a climbing trip in the alps to the south and was turned around because of the massive snow storms that had just started. In the city there weren’t any signs yet of fall such as leavings changing their colors. All the trees and plants were in full bloom and there were plenty of flowers in the city. 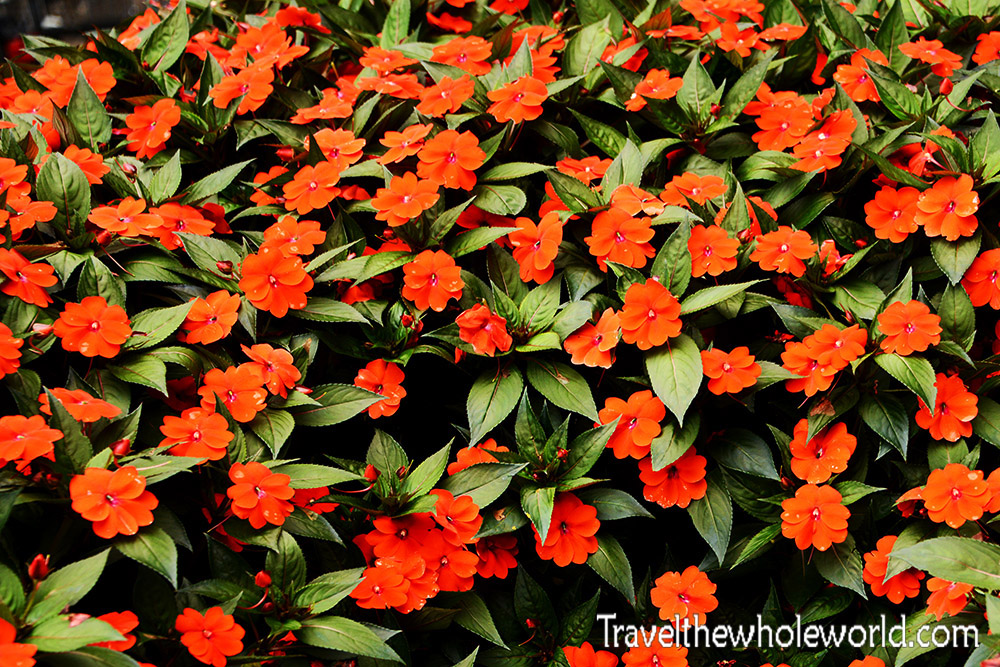 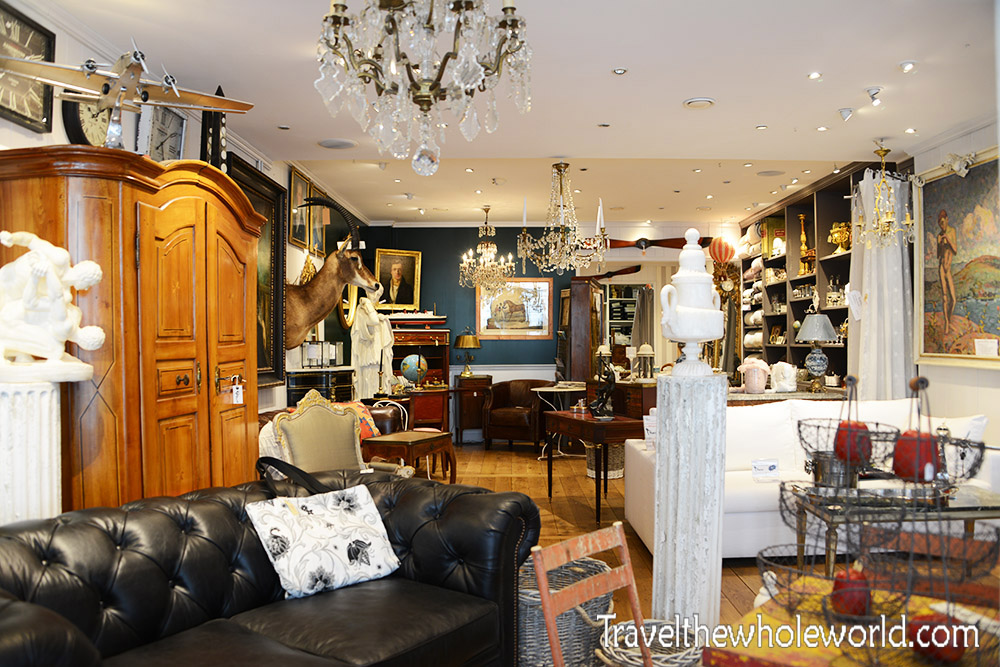 While I’m not much of a shopper, especially in a ridiculously expensive country like Switzerland, it’s sometimes entertaining to see what’s available in different countries. The old city actually has several high end shops, none of which I’d ever buy anything from! The store above sells furniture and decorative items for the rich. The photo below shows a small piece of artwork. I didn’t see the price but I’d expect it to cost thousands of dollars. 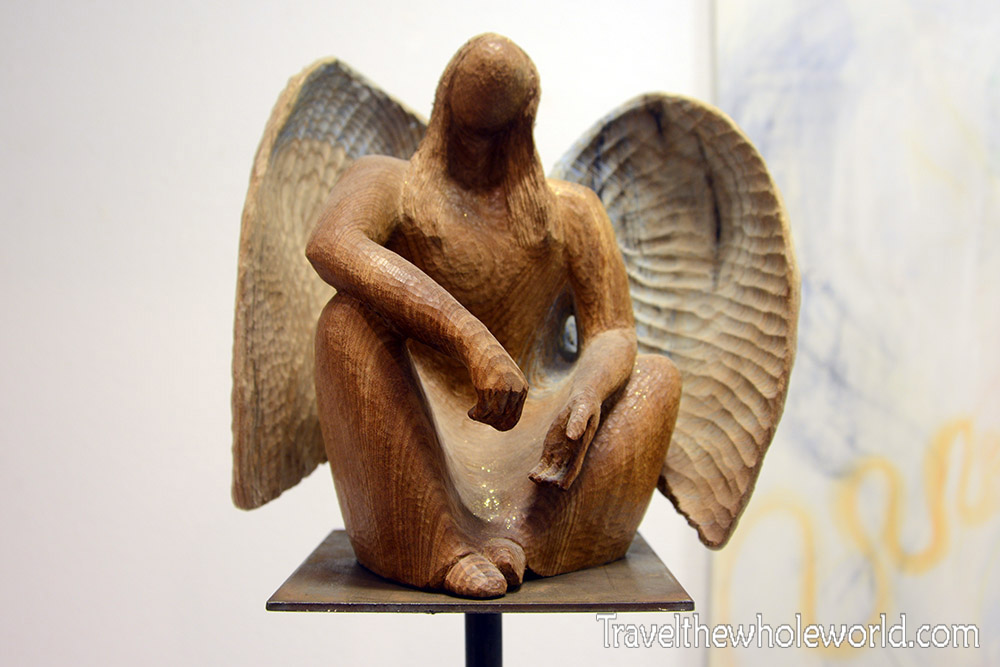 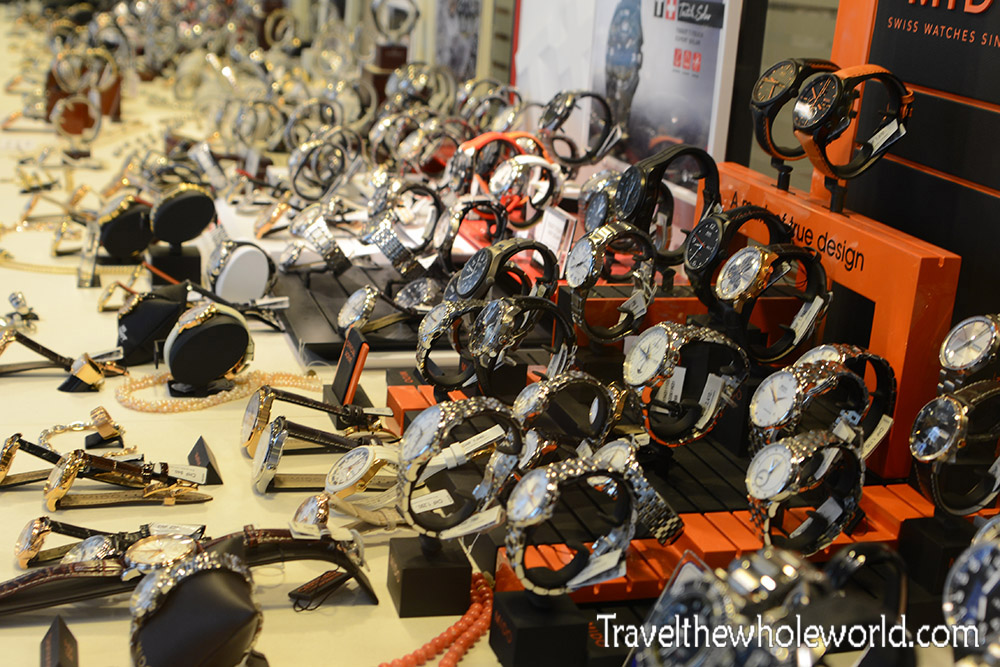 Switzerland has always been famous for its watches as long as I can remember. With so much modern technology that tells time, for me watches are a bit obsolete. The only watch I own is an altimeter for my mountain climbing. These clearly are more of a fashionable item these days. I’d also expect that some of these Swiss watches could cost thousands of dollars a piece. 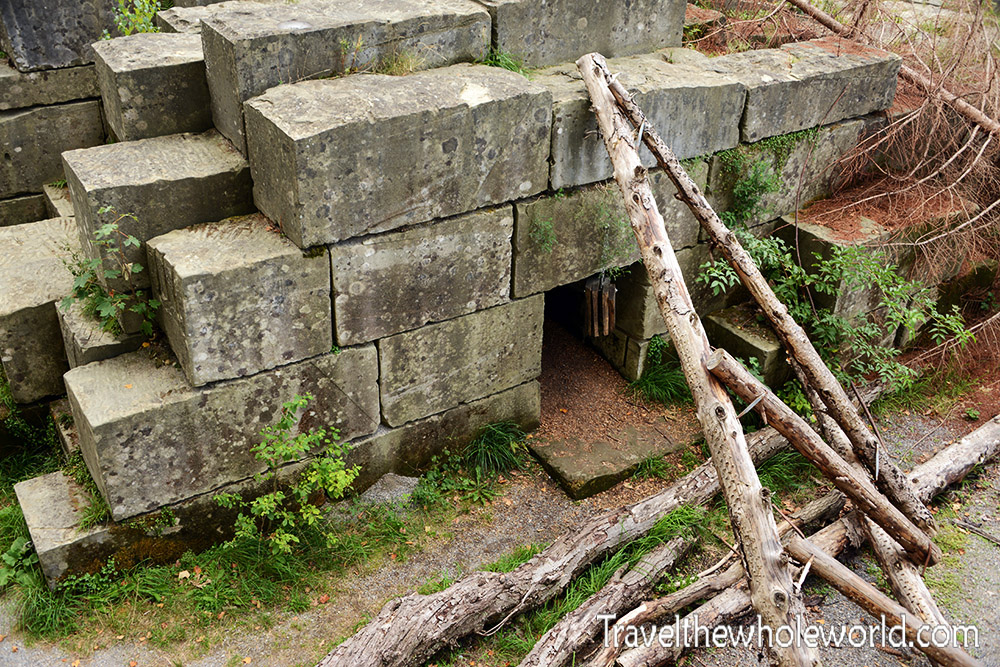 Above and below are photos of the only true tourist attraction that I visited in Bern. The Bärengraben, or Bear Pit in English, has been an enclosure for bears for hundreds of years. Bears have long been a symbol of Bern and also appear in their coat of arms. The bears sadly weren’t here when I visited, so I don’t feel I accomplished very much while in Bern on this trip! The bear pit has been connected to a larger outdoor park called BärenPark via a tunnel. The bears have more room here and can come and go as they please. 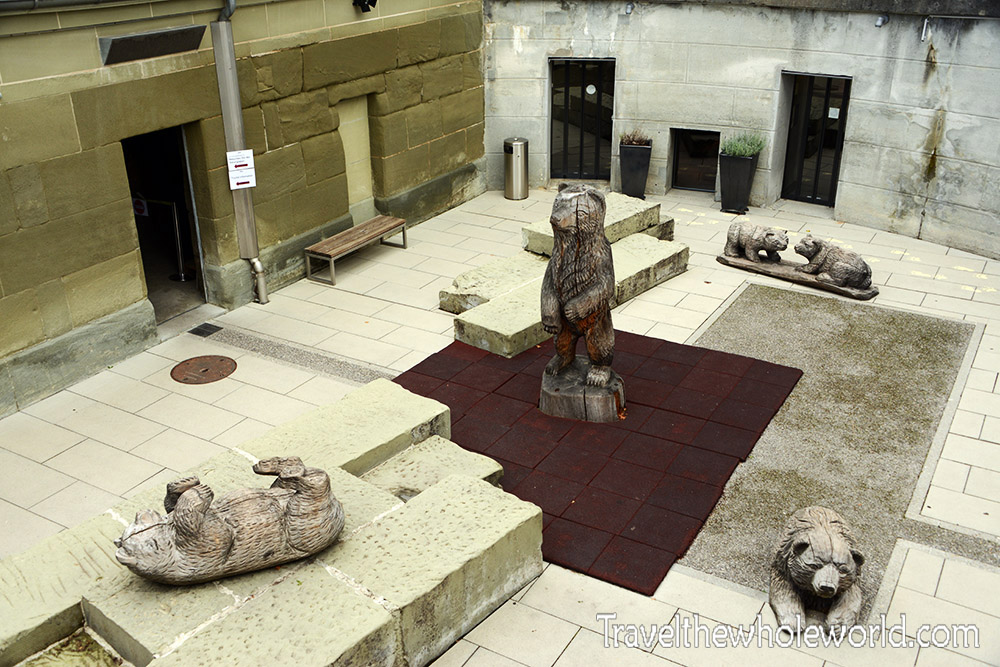