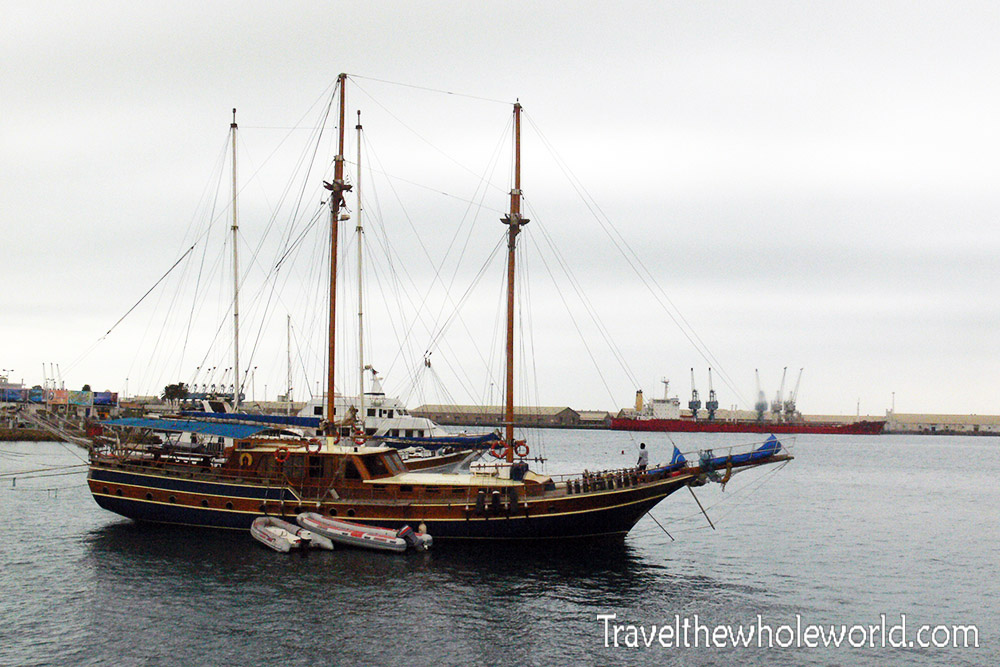 Sudan’s next largest city after the Khartoum is Port Sudan. I didn’t feel like Port Sudan was a big city, rather it was a seaside town in the northeast. Traveling to Port Sudan is much easier than Khartoum. As a matter of fact, this was the only place in the country where I saw any other tourists! Apparently there is a special visa that lets you enter this region from nearby Egypt, but you are not allowed further travel into Sudan. I visited Port Sudan over ten years ago, so by now things have probably changed. At the time photography was viewed with suspicion and it was an easy way to get into trouble. I remember a few weeks before my visit a Dutch traveler was arrested here and accused of being a spy. For some reason he was roaming around in the foothills outside the town which drew attention. I choose to stick to places like the harbor. 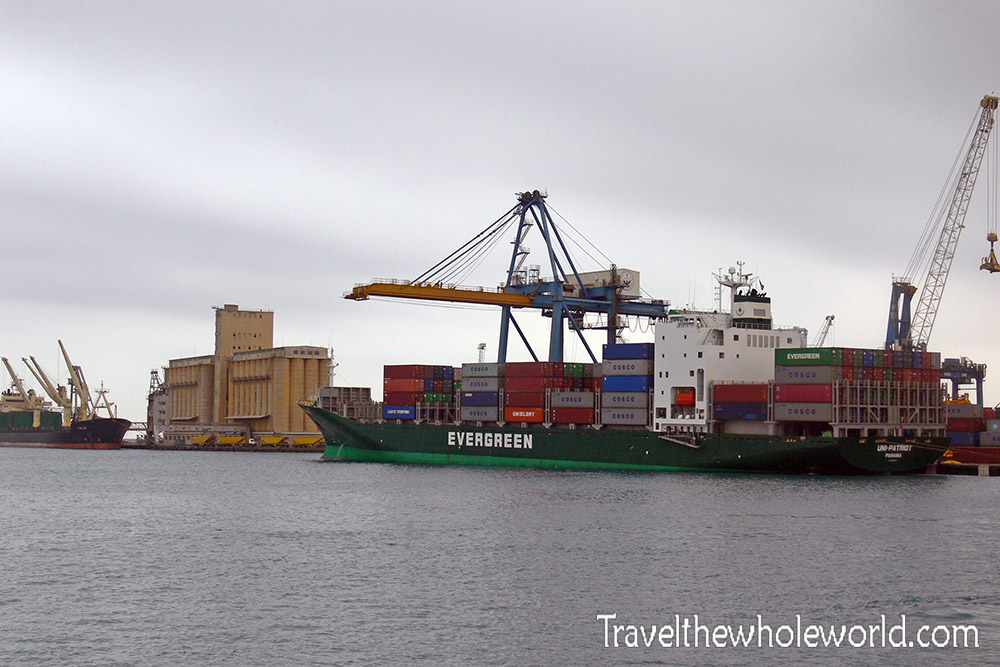 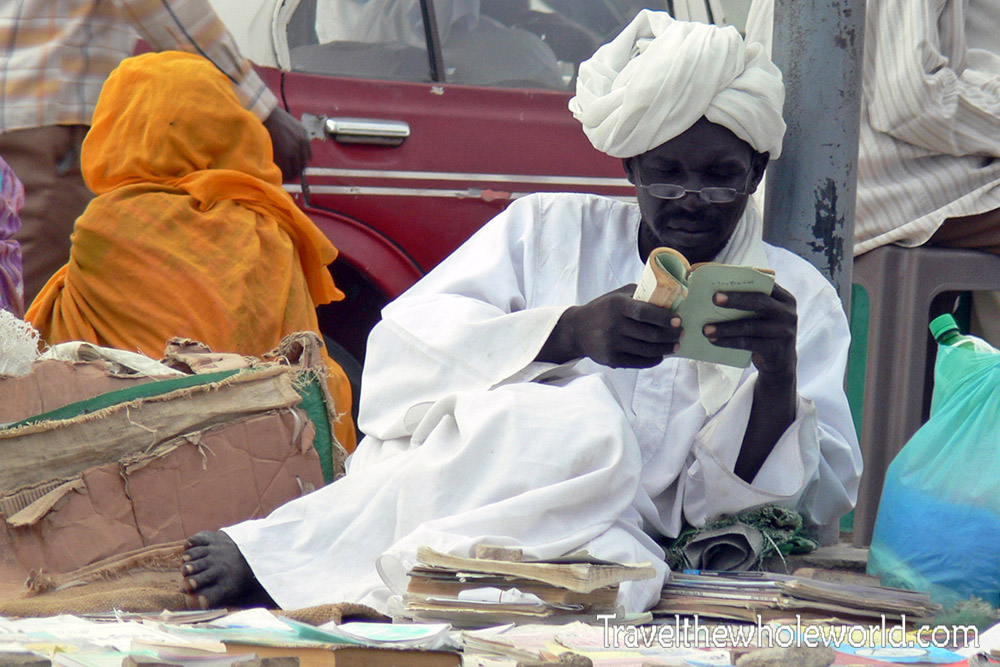 Even though I found Port Sudan to be a more attractive city than Khartoum, I did a horrible job photography wise. The fact that Sudan hated photography was only part of the problem, usually I tend to sneak some out anyway. Case in point, after I had left North Korea I took more photos there than any other country I had ever visited before! While in Port Sudan I was with a local who helped me get around the area. One day when I was alone I had taken the photos of the harbor. When I later told him his response was, “thank god you didn’t get caught!”. Despite the walks I did, restaurants I went to, and other experiences I have little to share for it on this page. I did capture this guy’s picture who could have easily made a big deal about it, but he was too much into his book to notice. 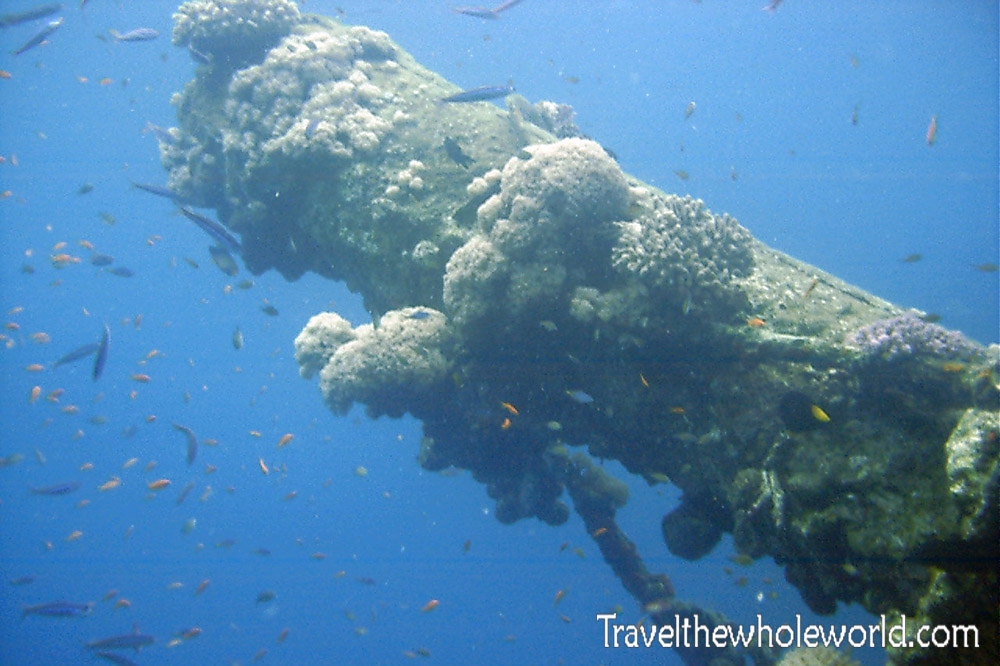 I was pretty surprised to find that scuba diving was available in Port Sudan. A golden rule of diving is to never dive alone. Who I thought would be my diving partner, put me in a speed boat and drove us out to sea for 45 minutes. We looked to be nowhere special, and he suddenly stopped and told me that he hoped I would enjoy my dive. He explained he would be fishing and suggested that I resurface once I began to run out of air. It had been a while since my last dive, and I had only gone a handful of times in my life anyway at this point in my life. As I tried to connect my oxygen tank to my BCD and do some other basics, I realized I didn’t even remember how to put on some of my gear! I wasn’t exactly enthusiastic about jumping in the water solo, but I had no choice. I had never done any wreck diving or anything of the sort, but as I descended in the water I quickly found a sunken ship. 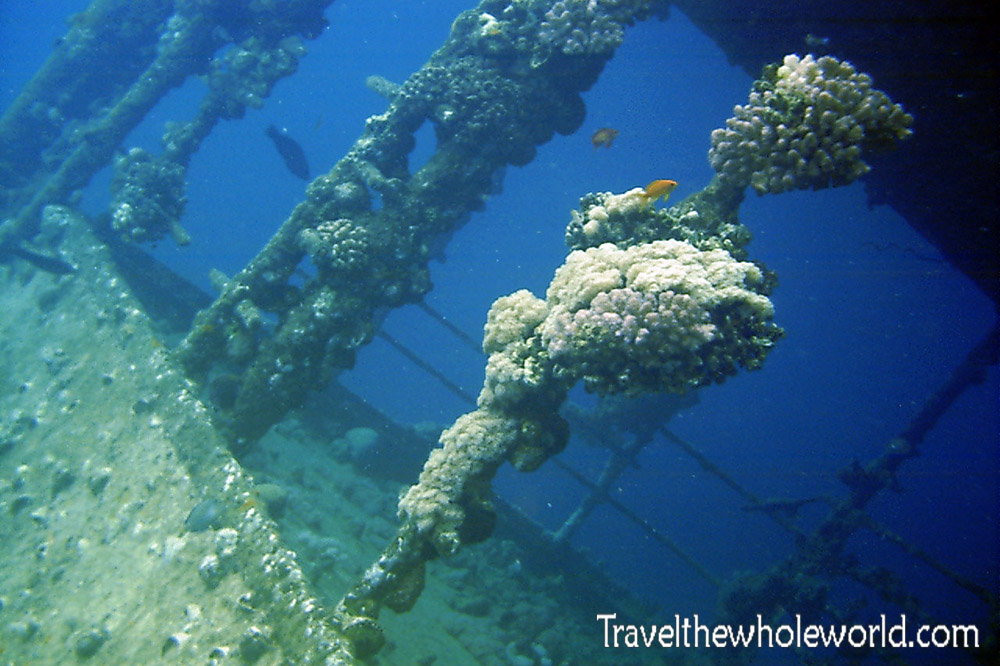 Since this was my first time doing a wreck dive, I found it to be a pretty eerie experience swimming around alone in the dark. We had overcast skies the day of my dive, and you lose light quickly as you descend making you feel deeper than you really are. In this photo you can clearly see the remains of the ships deck, which is surrounded by dozens of small colorful fish. 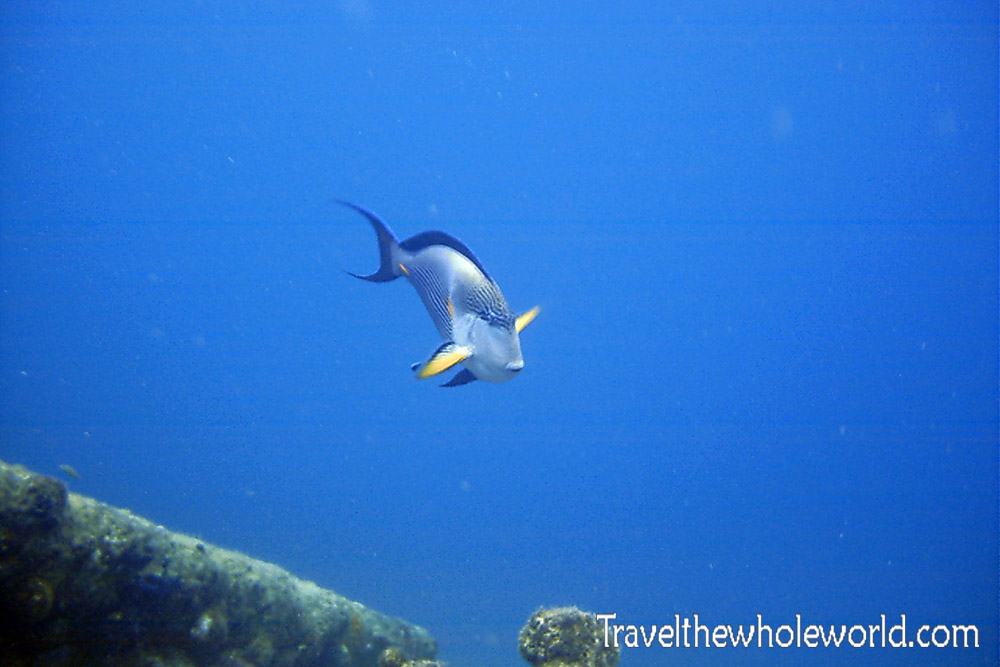 I was really surprised by all I saw here. The good thing about being alone was there was no police to attempt to take my camera, and I could take all the photos I wanted. Since my camera was one of the cheapest you could get for diving, , only a few photos that I took closer to the surface are worth posting. I believe this species above and below is the Sohal Tang, and I’ve seen them many times around the world in other tropical waters. 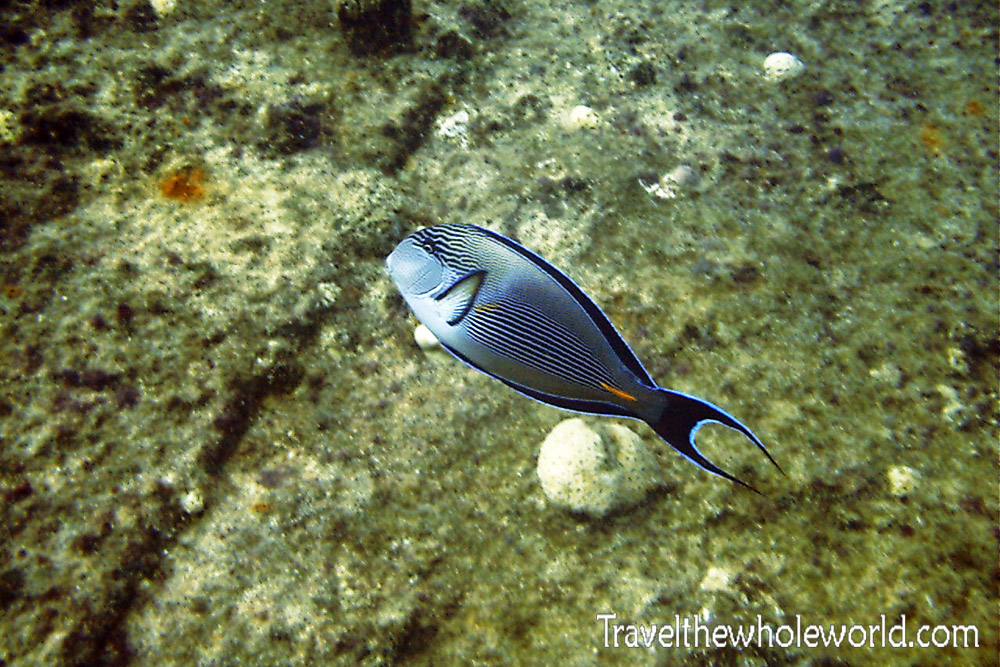 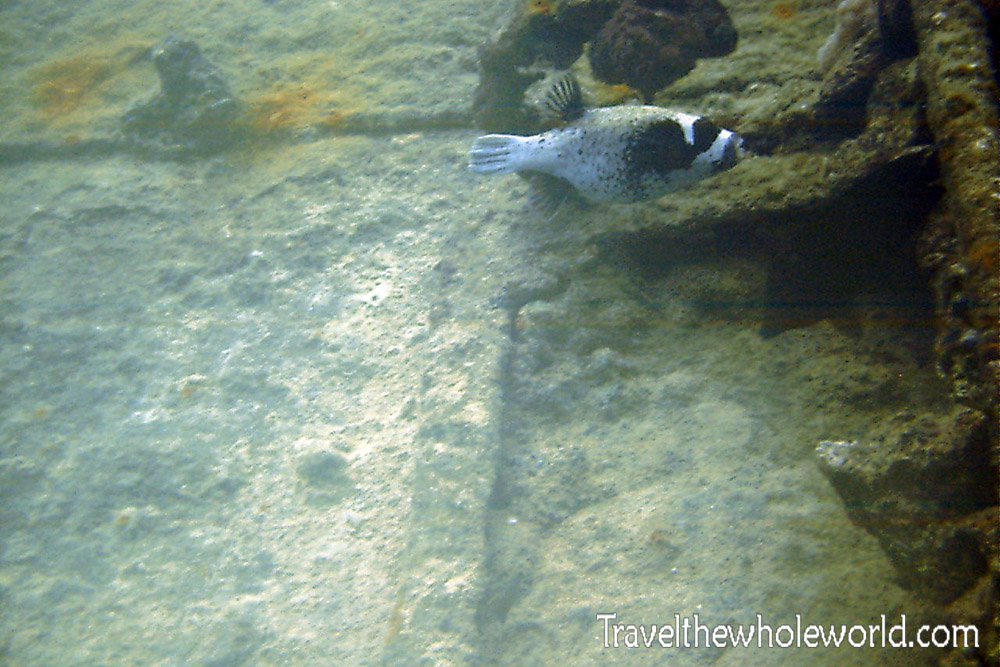 Even though I’m happy with these photos, they fail to show the highlights of my dive and all the other colorful species I came across deeper in the ocean. My last two photos are of the puffer fish above, and a parrot fish below. 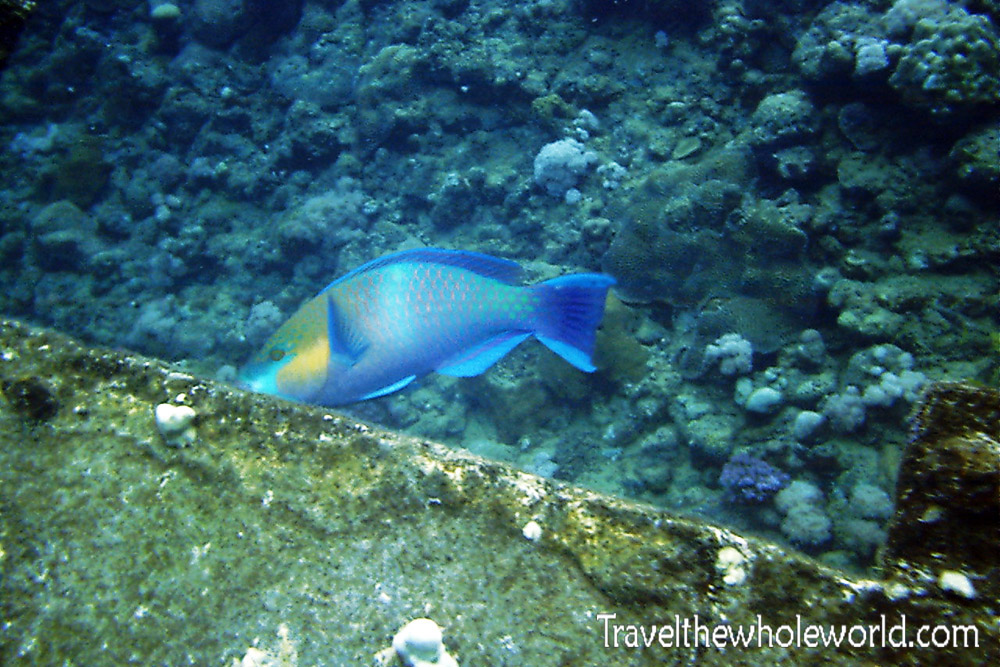