I’ve always found that one of the worst things about traveling to third world countries was passing by the poverty stricken villages. It’s a complicated situation to try to enjoy yourself while you are constantly passing by people much less fortunate. The only volunteer trip I’ve ever done was to Sri Lanka in 2005. I had been in between jobs right when one of the most deadly natural disasters in recorded history struck southeast and southern Asia. I figured this was my opportunity to help a nation in distress. I often do wonders at losing things, especially when I travel. When I arrived to Colombo I realized I had last all the contact information of the people I was supposed to meet and help…

My flight arrived at 3 am and one of those aggressive people working in the airport approached me and I explained my situation. He seemed to ignore every word I was saying and kept trying to offer me tours around Sri Lanka. I couldn’t believe it, I had literally traveled to the other side of the world to try to help and this guy was trying to sell me tourist packages! The guy at least got me to the capital of colombo where I got a hotel and crashed after a long journey overseas. The following morning I was able get in touch with a Sri Lankan church that was helping bring supplies to refugees, so although I never met with my original party I still was able to do what I had come here for.

Two things about this page. 90% of my time was dedicated to volunteering so I never had a travelers perspective on this island nation. The second thing is although I am now big on photography I hardly took any pictures when I visited, and those that I did were with a very old and simply camera. It’s hard to believe that this trip was nearly 15 years ago! I do hope to return and see the people I met again and the rest of the country under better circumstances. For travelers Sri Lanka has much to offer in terms of history, natural beauty and religion.

The official capital of Sri Lanka is called Sri Jayawardenepura Kotte, which is located on the western side of the island. Aside from being very difficult to pronounce, Sri Jayawardenepura Kotte is a small suburb of the larger city Colombo, which is usually referred to as the nation’s capital. As a matter of fact, it wasn’t even until after I left Sri Lanka that I first heard of Sri Jayawardenepura Kotte! These photos above are from one of the markets in Colombo. This was only about a week after the tsunami which occured far from the capital. It remained a busy place and life went on as normal here. This person walking on the left photo was a friend I made while I was in the city. The photo below were those who worked at the church and organized the entire relief effort. 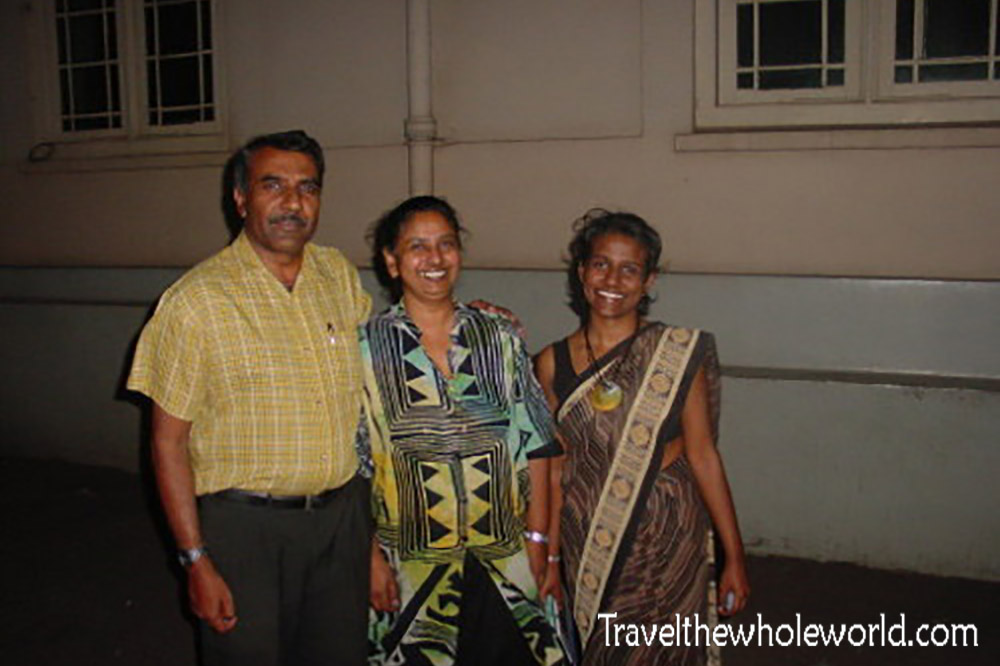 Most of my volunteering in Sri Lanka involved packing up food, clothing, and hygienic items in Colombo. This was done during most of the day, then when night came I’d ride solo with a truck driver to make the delivery in the east. There was a day where our supplies didn’t make it to the capital and we were left without anything to do. With the day off I decided to see some of the natural areas of the country. These few photos show the one excursion I did while in the country. Much of Sri Lanka is made up swamps and wetlands, and I was able to take a boat through one not too far from Colombo. Despite this just being a day trip, I came across a reaosnable amount of wildlife. Even when we were still heading out of the village I saw this giant monitor lizard!

I came across monkeys, reptiles, and several species of birds. This large heron above may have been an excellent photo had it been taken with a newer camera, but I think I did the best I could have at the time. I’m not sure how often people come through this area, but the locals I passed by all smiled and waived to me.

The same day I visited the mangrove forest I was able to stop by the ocean on the way back to my room. The beaches here are absolutely beautiful. I’ll make it a high priority on my next return to Sri Lanka to spend time here.

Other than the brief swamp visit and stop at the beach the rest of my time was spent volunteering. Some of the locals seemed scared about making the trip to the disaster areas as some trucks were being hijacked. On my drive east we were pulled over literally about 10 times by police and the military. Sometimes they just questioned us from the street, other times they asked for my passport, and a few times they even inspected our cargo. Regardless of what they did or asked the military and police were always to polite and to the point taking little time. The photos above show damage from the city of Batticula. A strong bridge has been destroyed and even it’s steel railings deformed under the raging waters. On the right hand photo there was once a large market full of vendors. Now there is nothing.

The ride to Batticula was terrible and took all night. With so many road blocks and lack of good roads we hardly got any speed. I honestly don’t think we ever hit more than 40 mph on any of the supply runs. One point during the night I had fallen asleep and when I woke up we were going in reverse because a large elephant was walking towards us on the road. The road was so bumpy I didn’t really get any decent amount of sleep. When I got to one refugee camp which was part of a church at 5 in the morning I asked to use the bathroom. Exhausted, I went into the bathroom only to have a man come in after me and try to sexually assault me.

He hadn’t tried to hide himself from watching me use the rest room. I wasn’t sure if this was normal in Sri Lanka or what. After that I tried to leave and he shut the door and began to make some vulgar offerings to me. I started yelling which caused him to take off running and that was the last I saw of him. I wasn’t sure what to do of this situation. I was filled with regret when I later read that several women were leaving the refugee camps because of frequent sexual assaults. If that man would be so brazen with a male foreigner I could only imagine what he might due to a local single woman.

Below are some final photos of the damage. The clothing you see in the trees was ripped off many of the victims as the water raised several meters off the ground. Other incredible feats I saw included a fallen radio tower. It must have once stood at 100 feet (30 meters), but was found crumpled up into a ball like a toy. You can apply for Sri Lanka visa online