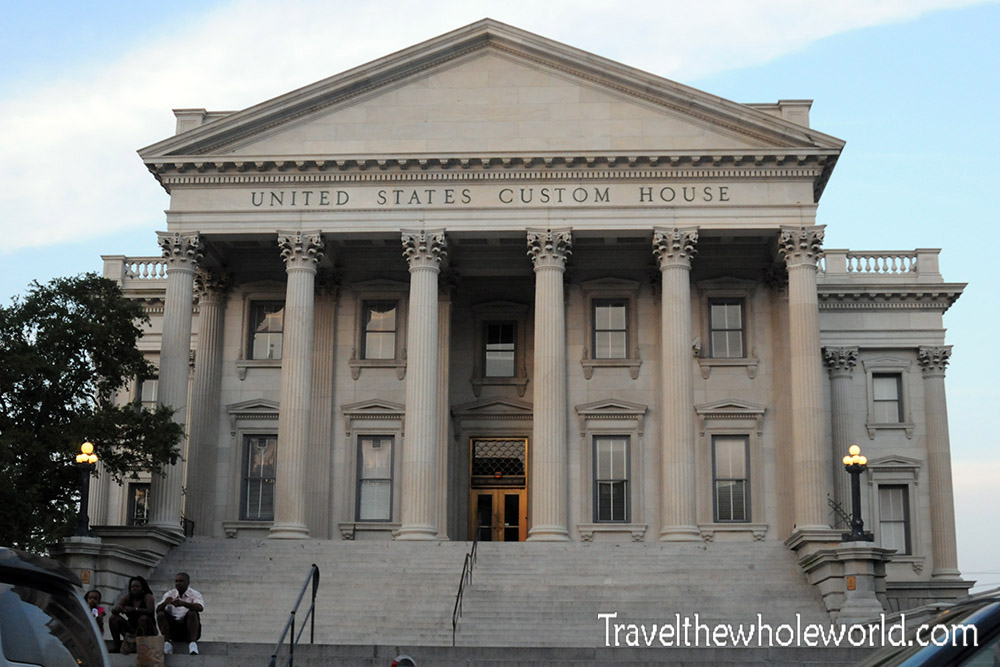 If you could only visit one place in South Carolina I’d suggest Charleston. The city is rich in history, and one of the most beautiful city’s on the east coast. Charleston was founded in 1680 by English proprietors under King Charles II. The city had a difficult start with constant attacks by Native Americans, attempted invasions by French and Spanish fleets, and even raids by Pirates. I’ve visited Charleston multiple times in my life, but it’s been over ten years since my last trip, long before I had a good camera. The photo above shows the cityy’s court house. 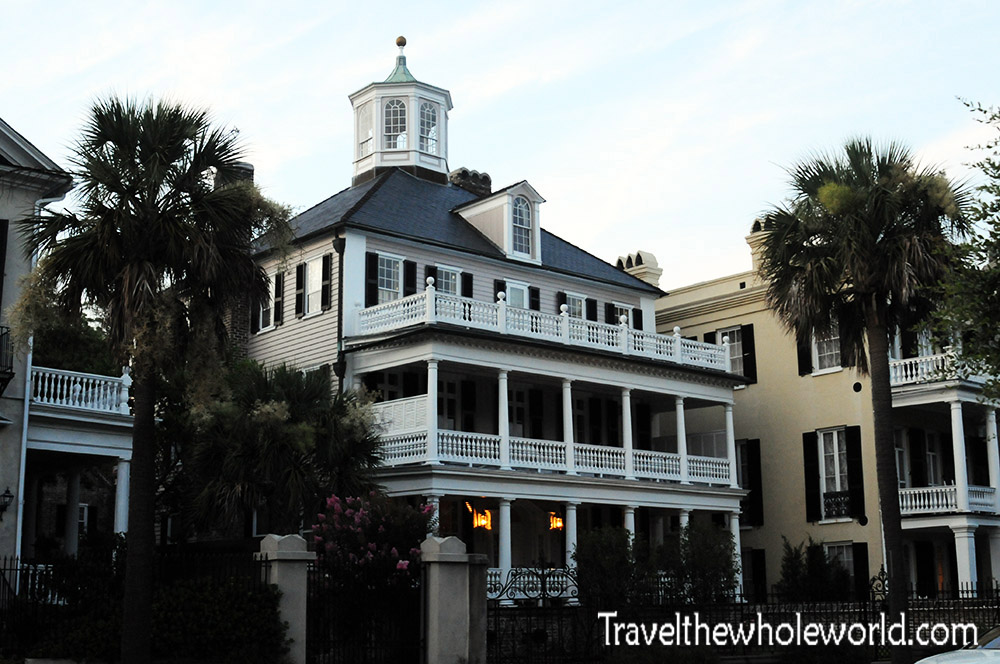 One of the older neighborhood I visited is known as the Battery, which is located at the southern most point of the city. The Battery is a scenic neighborhood with several parks and some enormous colonial mansions. It goes without saying that all of these homes easily cost millions of dollars. Above and below are two photos of typical homes you’ll see in the Battery. There is also a luxury hotel located in the neighborhood. A little bit of interesting history here, the Battery was actually a site where pirates were executed. It’s estimated that close to 30 pirates were executed here during the 1700’s. 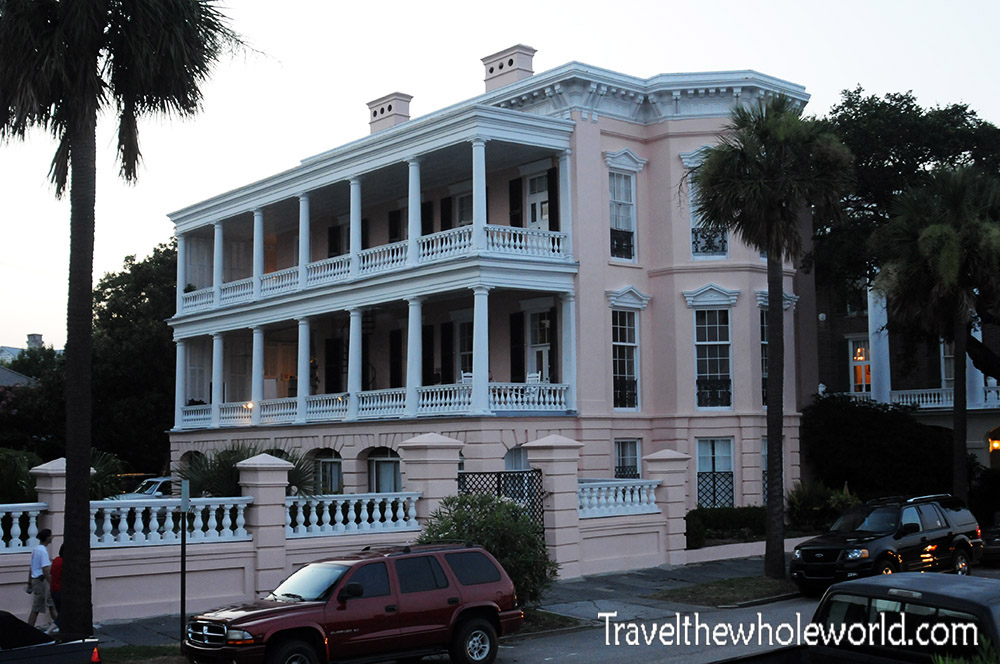 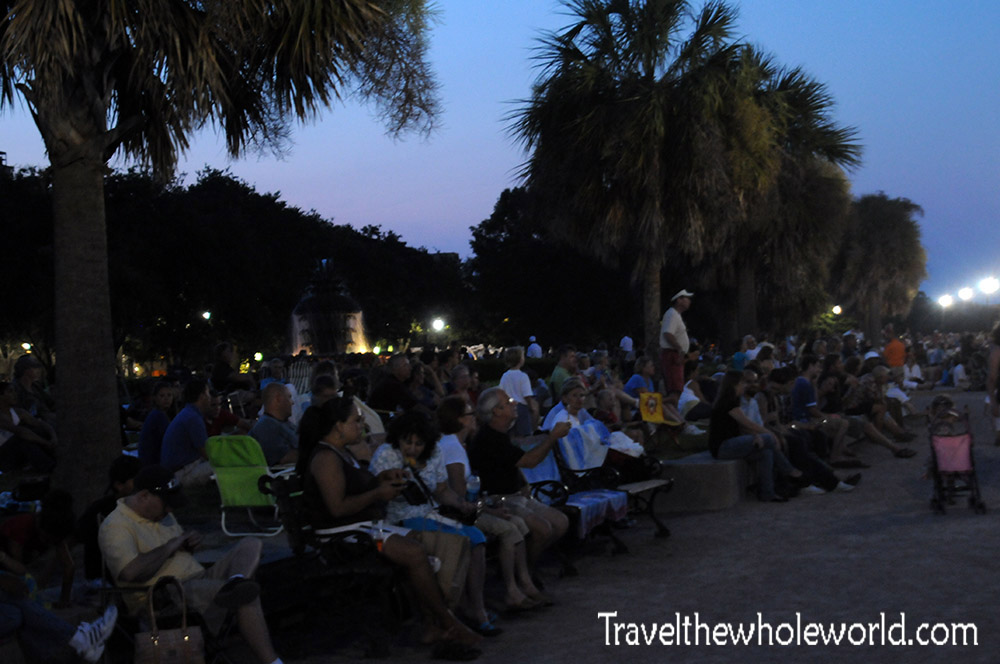 My last visit to Charleston was ten years ago when I returned for July 4th. I figured the best place to see them would be from the Battery, but honestly I think this wasn’t a good choice. Most of the fireworks seemed to be closer to the shore across the sound, so they appeared small from our vantage point. Those who probably had it the best were in their own private boats in the sound. 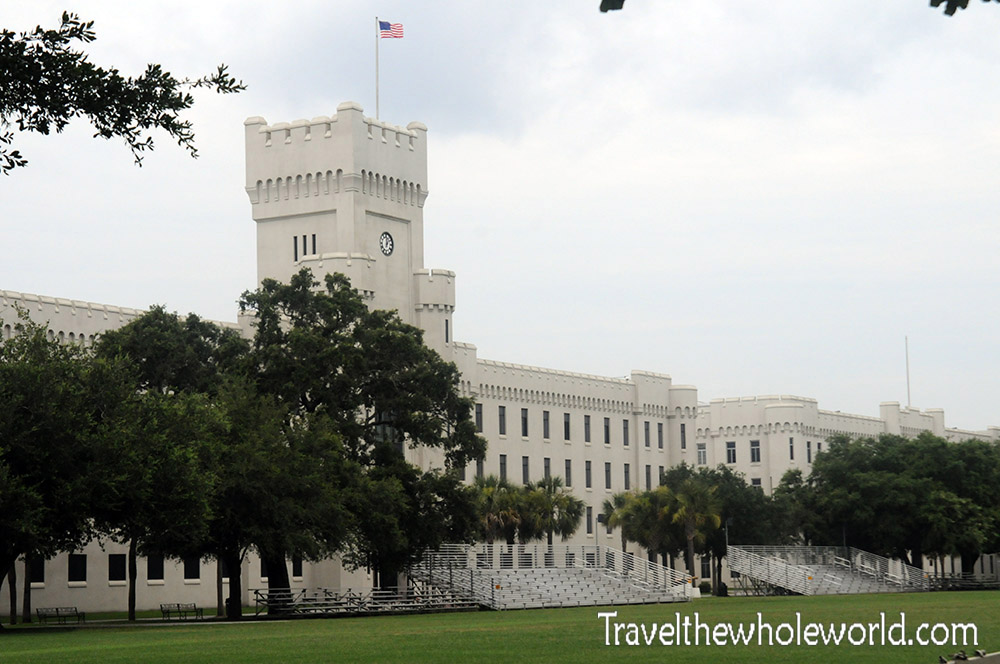 These two photos show the famous Citadel in downtown Charleston. Founded in 1842, the citadel is one of the most famous military colleges in the United States. As a matter of fact, cadets from this citadel were the ones who fired at a federal ship back in 1861, the first shots of America’s bloody civil war. Today there are about 2,000 cadets enrolled at a time at the citadel with an additional 1,000 civilians. 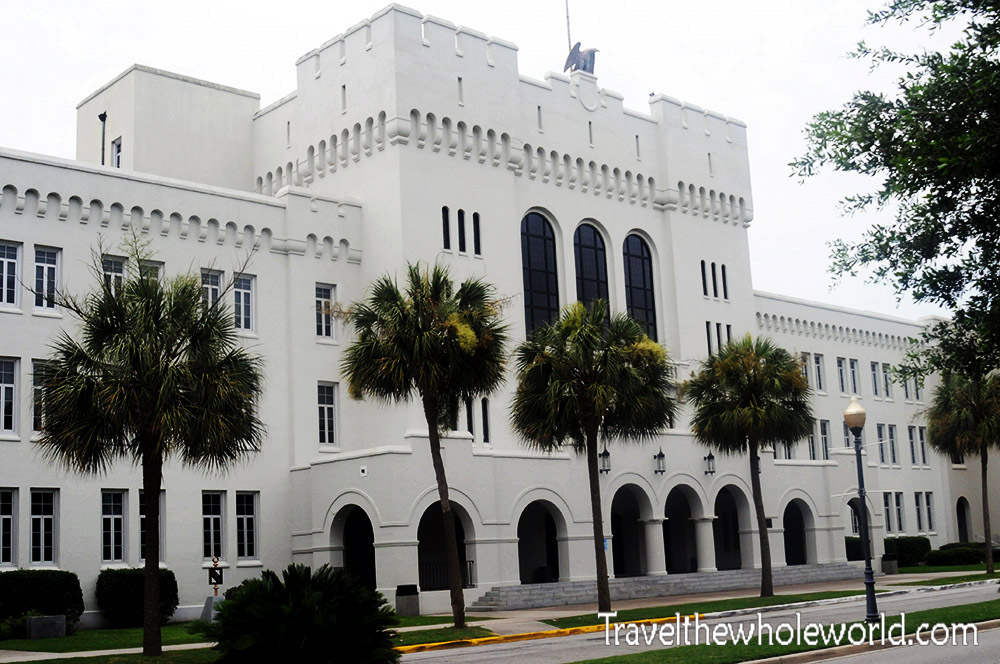 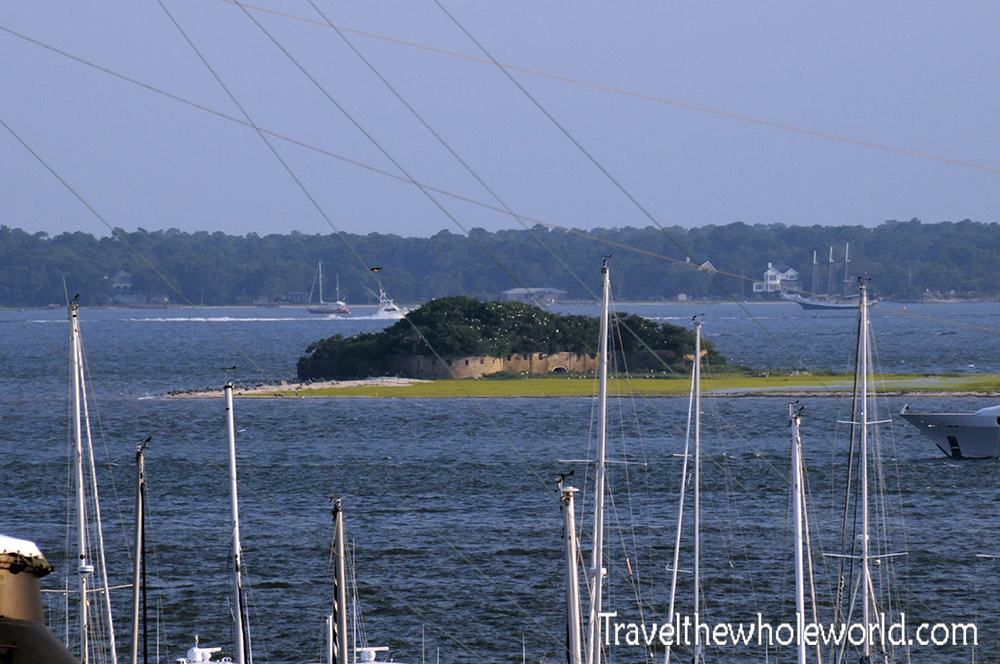 I once mistook this small island for Fort Sumter, but this island is the home of the Castle Pinckney. This is one of several defensive forts in the harbor of Charleston along with the larger Fort Sumter. Fort Sumter was founded just after the British War of 1812, but its significance wasn’t until the first shots where fired here during America’s civil war. South Carolina was the first state to declare independence from the United States and attempted to negotiate a peace treaty. The United States refused to recognize South Carolina as a new country and maintained its troops that were stationed in Fort Sumter. After additional talks failed and food was beginning to run low, a supply ship named Star of the West was sent to replenish the island. Under orders from a general, cadets from the Citadel were told to open fire on the supply ship which was forced to turn around and retreat. In response, Abraham Lincoln sent reinforcements and later the battle of Fort Sumter began. The war that followed brought so much death and destruction that was probably far beyond their imaginations. The civil war ended up killing more Americans in it than the Revolutionary War, both World Wars, Vietnam, and the Korean War combined. 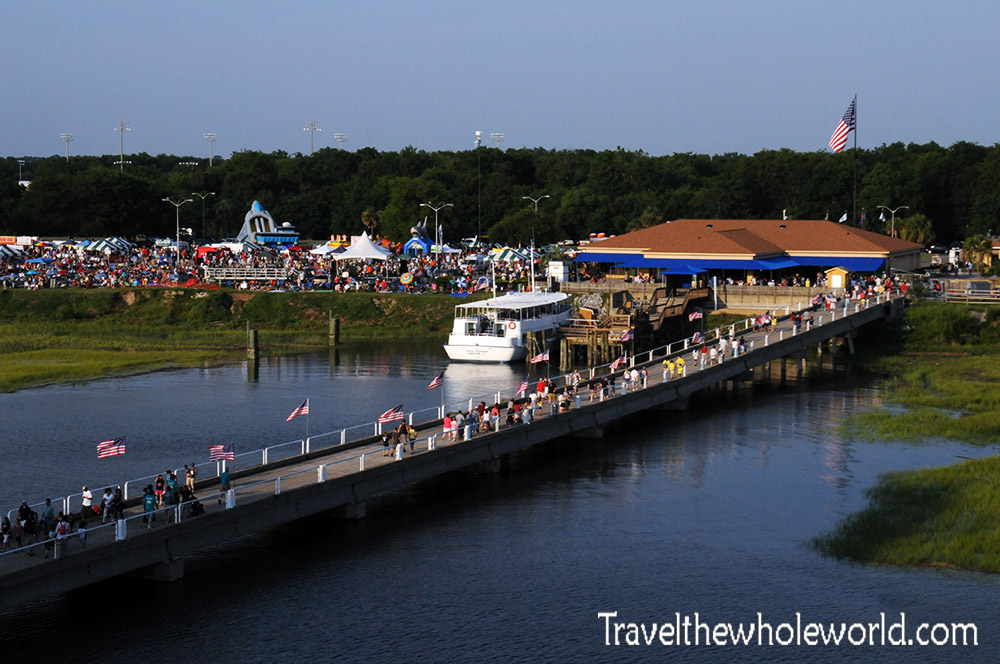 I hate to have so few pictures of a city that I’ve spent so much time in. The only time I took any photos was on my last trip, where aside from the fireworks and night life, the only other pictures I have are of Patriot Point. This Naval and Maritime museum of course focuses on its four large naval ships and 25 aircraft, but also is home to several events throughout the year. On July 4th, there was a small festival taking place that included live music, food, and some fun family oriented activities. The large ships on display included a US Navy Destroyer, aircraft carrier, submarine, and the US Coast Guard Cutter below. 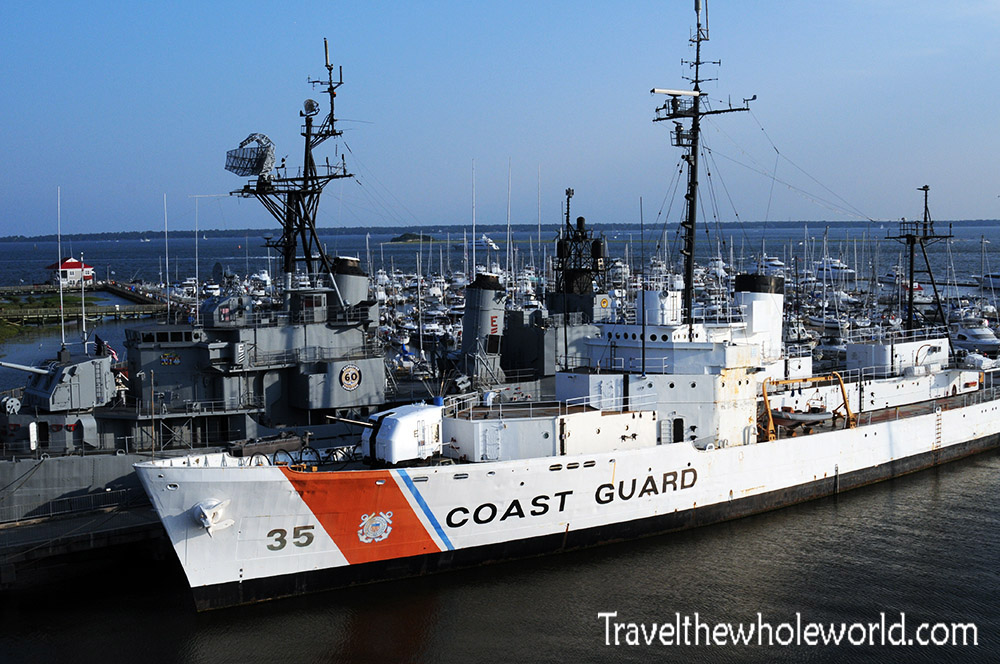 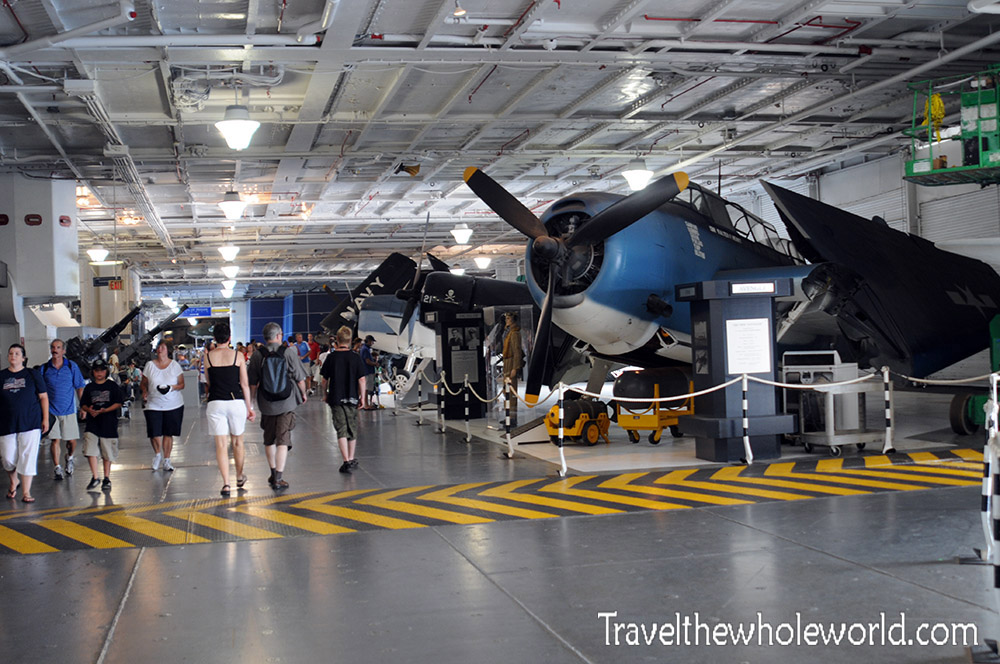 These two photos show the aircraft carrier, the USS Yorktown, which was used during world war II. The F/A 18 below was parked on the carrier’s flight deck. For five years I fixed all avionic systems on F/A 18s while in the Marines from 1999 to 2004. I also spent about nine months of my life living on the USS Truman, so it’s always interesting to visit one. Had I been into photography back then I’m sure I could have gotten some amazing action shots of our deployment overseas. Many parts of the USS Yorktown are open for exploration, and the hangar bay also has more aircraft on display. 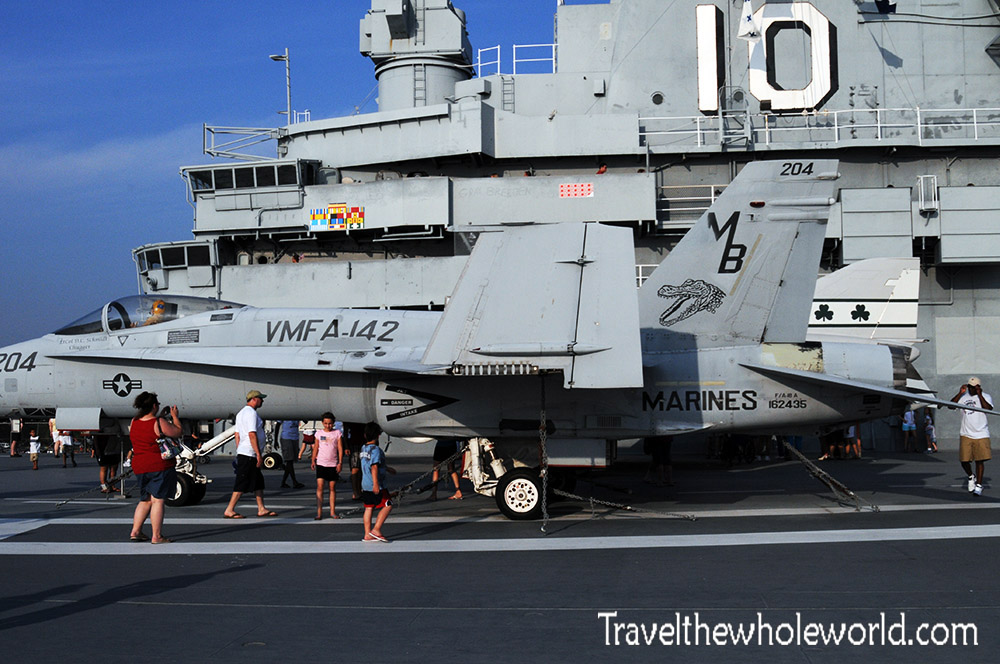 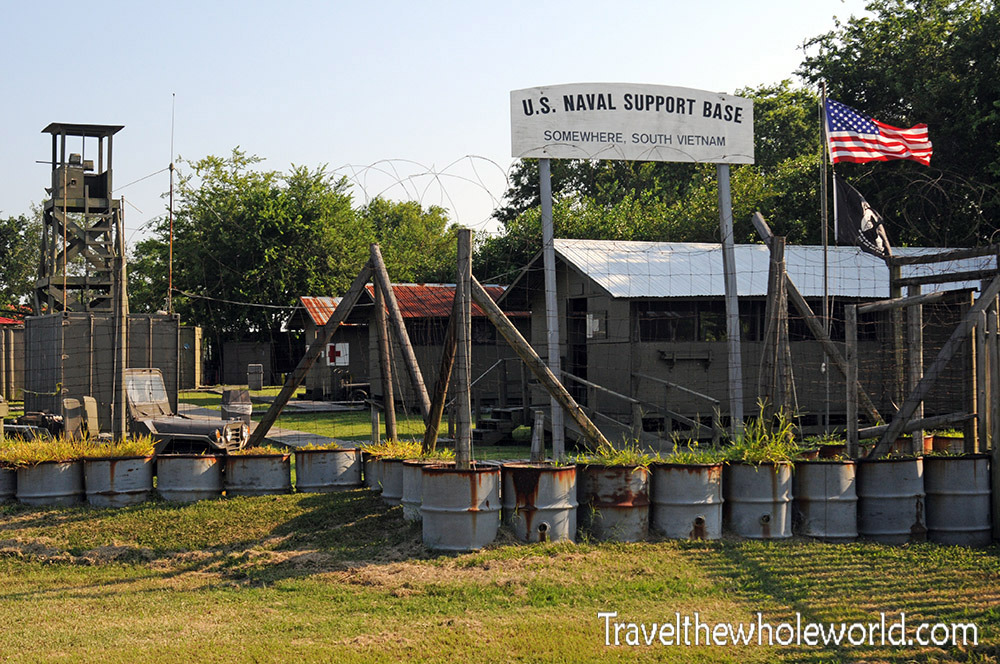 Lastly, I liked this small replica of a naval support base in Vietnam. 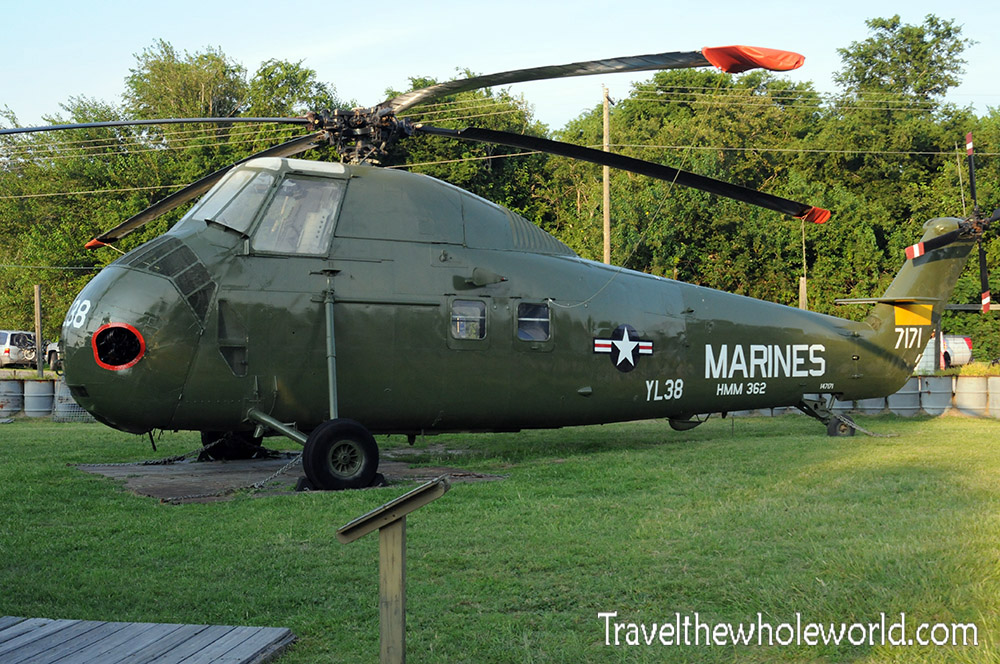