Notice: WP_Scripts::localize was called incorrectly. The $l10n parameter must be an array. To pass arbitrary data to scripts, use the wp_add_inline_script() function instead. Please see Debugging in WordPress for more information. (This message was added in version 5.7.0.) in /home/lastadventurer/travelthewholeworld.com/wp-includes/functions.php on line 5313

First off please excuse these ancient photos which do little justice to such an amazing country! Not only are these pictures 15 years old but they were greatly reduced in quality and I’ve lost the originals. South Africa is one of the world’s greatest destination, thanks to the country’s amazing landscapes and beautiful cities, so its a place I will definitely make multiple trips to. The tourist infrastructure is among the best in the continent so getting around is very easy. Most Africans I met from other countries compare South Africa to Europe, because of its higher standards and cleaner cities. There’s more to do here than you might think, with everything from shark diving to even skiing.

I once met a South African when I was in Russia who told me that South Africa isn’t Africa, and Cape Town isn’t South Africa. After arriving tot he city I understood what he meant. Cape Town is so different than the rest of the country, you feel like you’ve left the continent. Out of all the cities I’ve ever been to, I have to say that I think Cape Town is one of the most beautiful. Above is a view of the city seen in front of Table Mountain.

On the upper left is the South Africa’s city hall, which was barely a 100 years old when I first visited. Many of these views could easily pass for California or parts of southwestern Europe. There’s some beautiful real state built along the coast, and without any natural disasters and year around great weather this could be one of the most ideal places to live. The city is very clean with nice and modern infrastructure.

Natural beauty isn’t just limited to Cape Town. Just around the corner is Simon’s town which has one of the most beautiful coasts and homes I have ever seen.

What’s so great about visiting Cape Town is all the activities are walking distance from homes and hotels. The guy body boarding was from Simon’s town, while the the lady enjoying a nap was just a block away from a neighbhorhood in Cape Town. The only issue with swimming or surfing in South Africa is that the area is popular with great white sharks. I’d feel a lot more comfortable cage diving than doing what this guy above is doing. Below are two more shots from coastal areas around Cape Town.

Many parts of South Africa get lots of snow in the winter time, and enough of it to maintain ski resorts. The western part of South Africa is a more desert like rocky area, but as you continue farther south you’ll start to see some green mixed in. I rented a car to get around South Africa and one night in the northeastern part fo the country I woke up to this frost built up on the windshield!

While South Africa has plenty of amazing cities and towns, there are also plenty of places in extreme poverty. I didn’t visit any of South Africa’s unknown parts, but I did drive through a few of the poorer parts of the country. Most of this was unintentional, because back in these days there was no GPS and I was navigating by paper maps only. I doubt some of these places ever get visitors, but all the people I came across were nice. One regret I have is not taking a photo of are the several ‘hijacking hot spot’ signs. These signs are along the highway and warn people of areas that people are frequently carjacked. I’ve heard several stories of creative ways that people stealing cars in South Africa. Some range from standard violence using firearms, while others are almost willy with people throwing a bucket of glue on your windshield forcing you to pull over because you can’t see.

My road trip that accidentally took me to some random villages was aimed at Blyde River Canyon. This ended up being one of my favorite places in the country. I arrived a bit later than I wanted to, and missed out on a hiking trail which will be done next time I return. The upper left photo was taken from my favorite viewpoint, and the photo on the right is of a place called the Potholes. Rushing water through the canyons creating circular currents which over time carved out these interesting features.

Back in the southern part of the country, an easy place to visit from Cape Town is West Coast national park. This place is a bird watcher’s paradise, ad its known for the tens of thousands of birds that visit each year, some from as far as northern Russia! Even before I was officially in the park, I came across this huge rock out in the ocean covered with cormorants. There’s a lot of diversity here when it comes to birds, but the park is also famous for its flamingos.

Something nice about West Coast national park is there are no dangerous animals here. You can go hiking and walk around alone without having to worry about being attacked by a lion or wildebeest. These tphotos were also taken from West Coast National Park. I’d say this ostrich I saw sprinting through the brush is probably as big as any animals get here. The bird on the upper right was my favorite that I saw my entire time in Southern Africa, and is a sun bird, if only I had a proper camera at the time!

There’s also much more to birds in West Coast national park. I was extremely lucky to get a shot of this mongoose which are usually nocturnal and shy creatures. The tortoise on the other hand is so slow he was a less impressive shot. 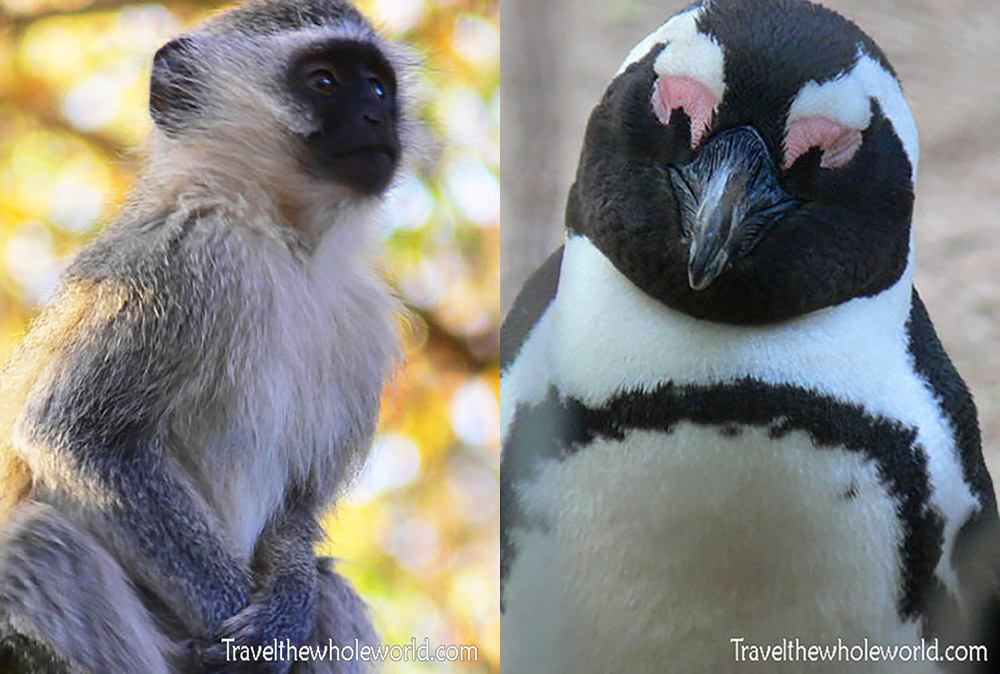 Two other animals I came across where the ververt monkey, which for nearly a decade thought was a velvet monkey, and penguins! Penguins aren’t really something you’d expect in Africa, but they maintain stable populations in the southerns of the continent. These guy below has his eyes closed, and for whatever reason his eyelids give them impression he is still watching you.

The most famous national park in South Africa is definitely Kruger. This is a place that is full with all your typical African wildlife, from lions to cheetahs and elephants to zebras. I’ll get these two birds out of the way first, a Ground Hornbill on the left and a Cape rock-thrush bird on the right. 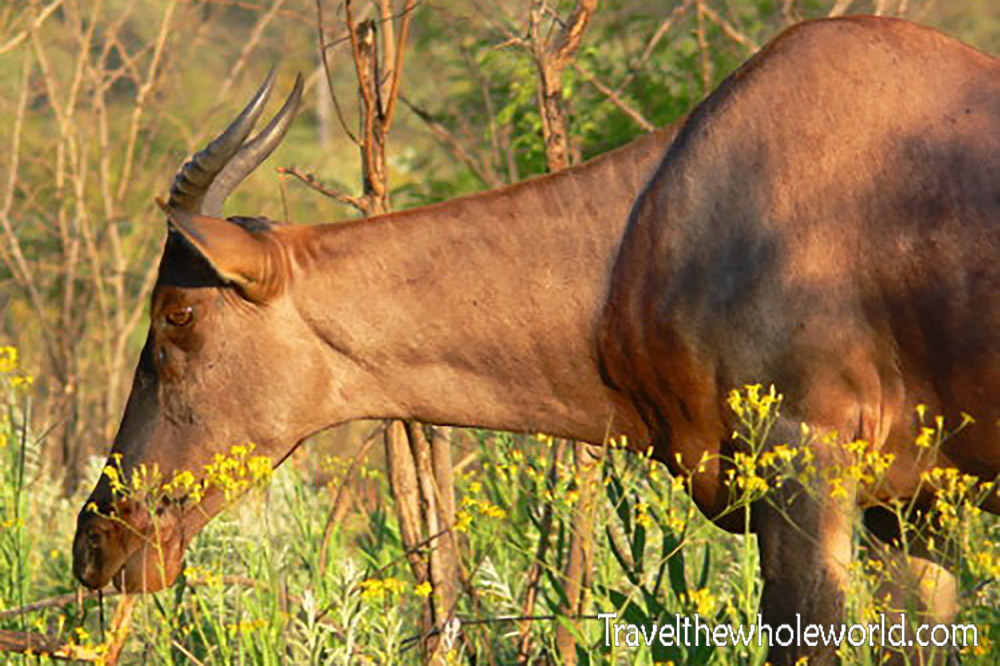 And look at that, one of my photos survived to where I can post a decent size of it! This large animal is a Tsessebe which I had never seen before coming to South Africa. The zebra and gazelle you can’t miss in any African safari. 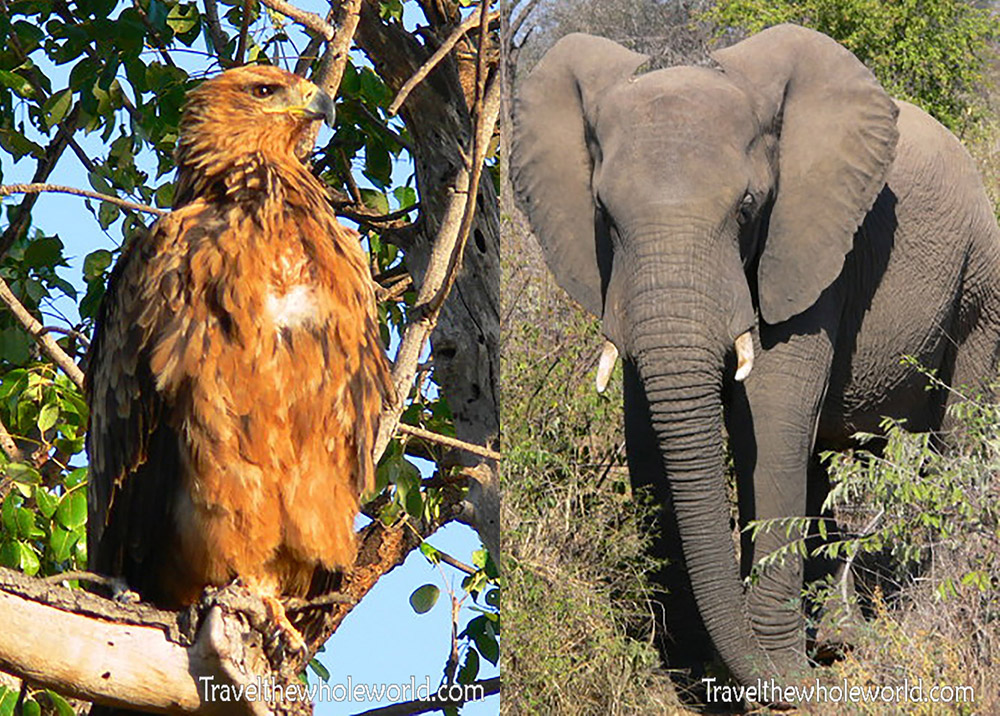 Unfortunately I didn’t come across any lions while in South Africa, but I saw plenty of hawks, eagles, and lots of elephants as well. What’s unique about Kruger national park is you can drive your own car on a self safari. It’s definitely nice to have control and go where you please, but of course once in a while a vehicle is attacked by an elephant or rhino. I think this elephant was one of those who hate being social media and was starting to get annoyed that I was taking his photo. Luckily I was in a rental car if he had decided to attack, but once I got the vibe he wanted me to leave I took off without any issues.

I should emphasize that these photos were taken with a three megapixel primitive camera with almost no zoom. The fact that some of these came out decent considering how old my camera is shows how close and personal you can get to some of the wildlife here. Giraffes are also very common in Kruger, and unlike the elephant didn’t seem to mind having their photo taken. I was even able to get close enough to show some of the yellow-billed oxpeckers eating ticks off the giraffes fur.

And lastly, here are two unimpressive shots of some dangerous wildlife I saw in Kruger. The crocodile speaks for itself, but hippos are often mistaken as not threatening, when they are actually very territorial and will violently attack anything perceived as a threat. I’ve long been overdue for a return to South Africa, and imagine I’ll stop by on my way to Madagascar one day, which has been high on my list for some time!