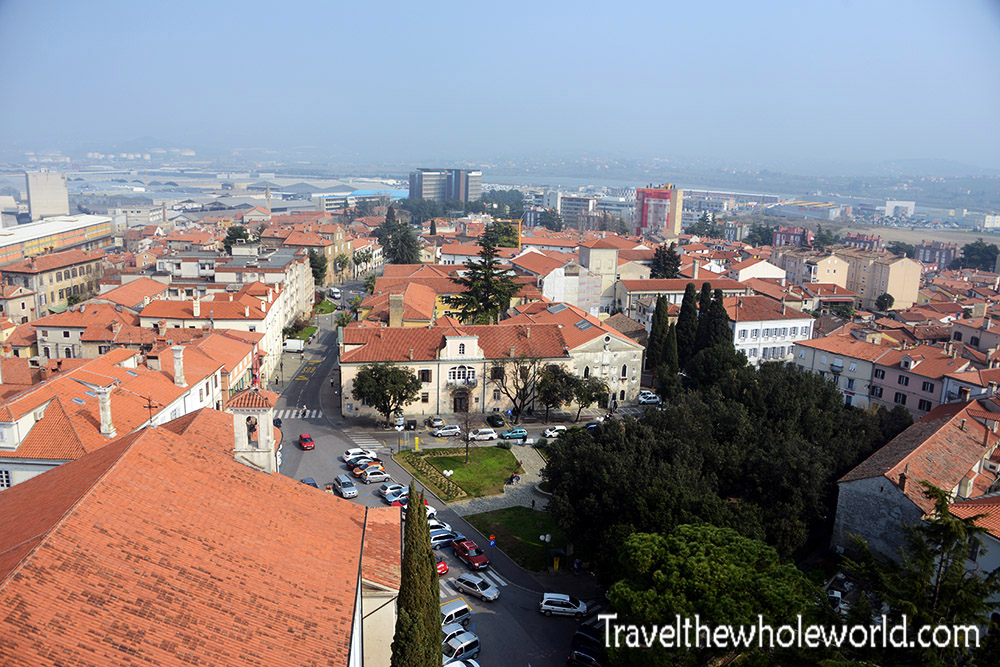 The only place I visited in Slovenia was the seaside town of Koper. I remembered Koper being bigger than it actually was when I returned a decade later. As Slovenia is a small country and this is their only seaport, it’s an interesting place to visit. The population of Koper is only about 25,000 people, but had you asked me before I returned I might have guessed at least 100,000! These two photos above and below show the Old City, which is the most interesting part to visit. 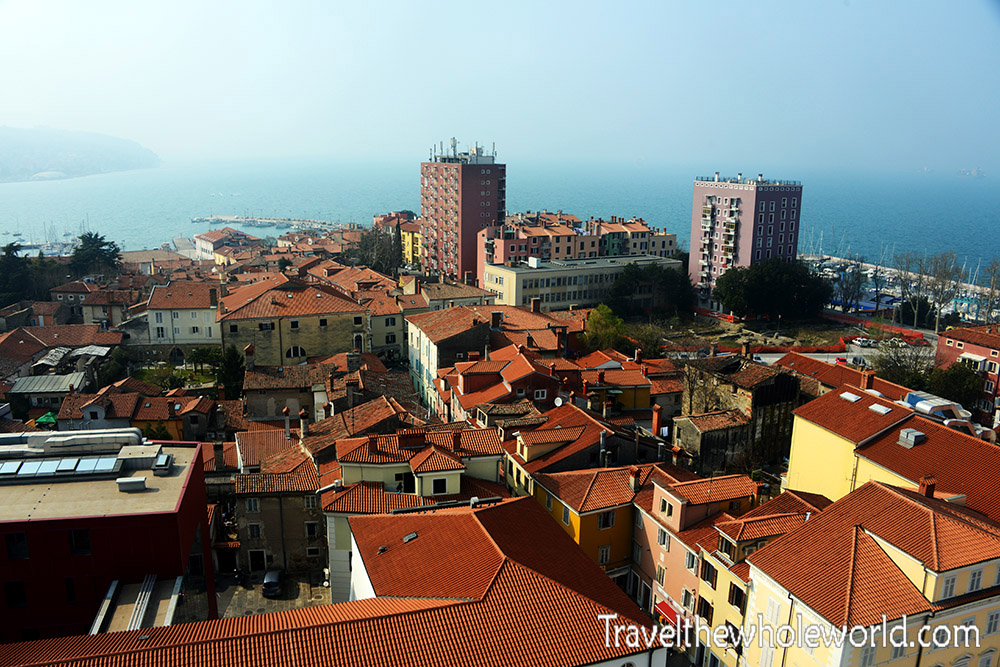 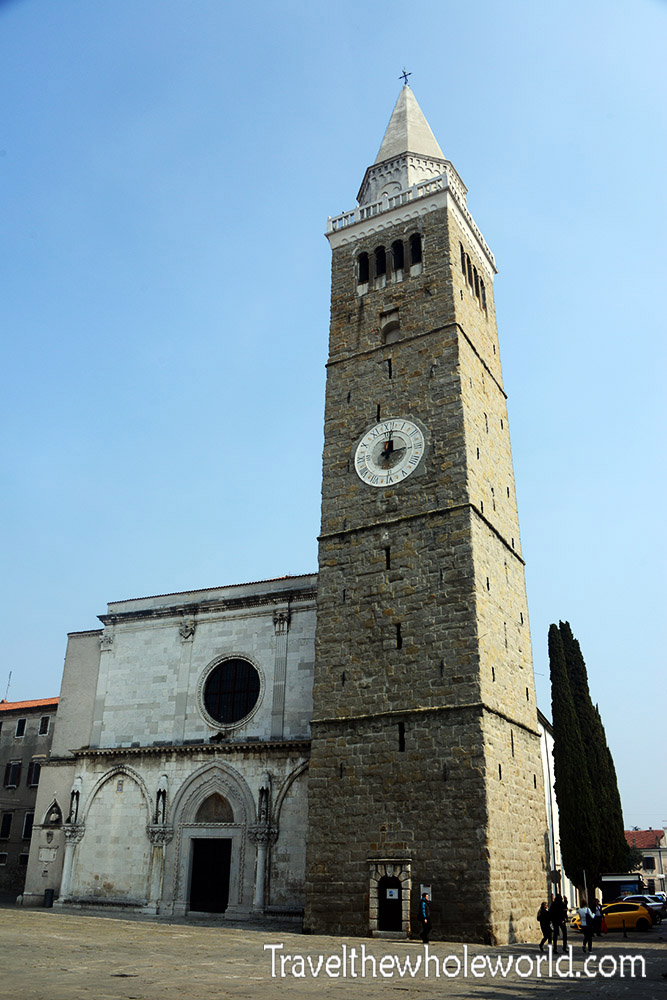 Located in the middle of Koper’s old city is Tito Square. The square is not very large or crowded, but has some of Koper’s most important landmarks. The most famous is the Praetorian Palace which dates back to the 15th century and is the city’s most famous structure. I can’t even begin to say how disappointed I am to have visited the palace twice, and both times forget to take any photographs of it! I did at least get the Cathedral of the Assumption photographed above. 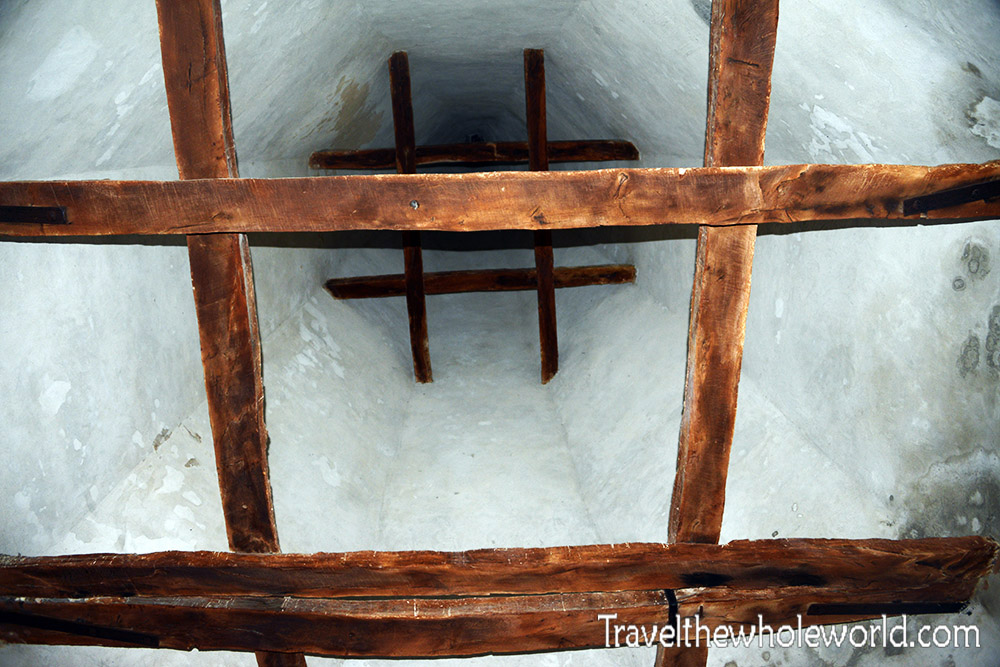 There aren’t any high buildings in Koper, so the cathedral’s tower is about as good as it gets. The bell tower can be climbed for a small fee and gives you a nice view of the city. As you climb the stairs you’ll get a history lesson from information boards posted alongside of you and even get to see a few artifacts. These two photos above and below are of the very top of the tower and its bells below. 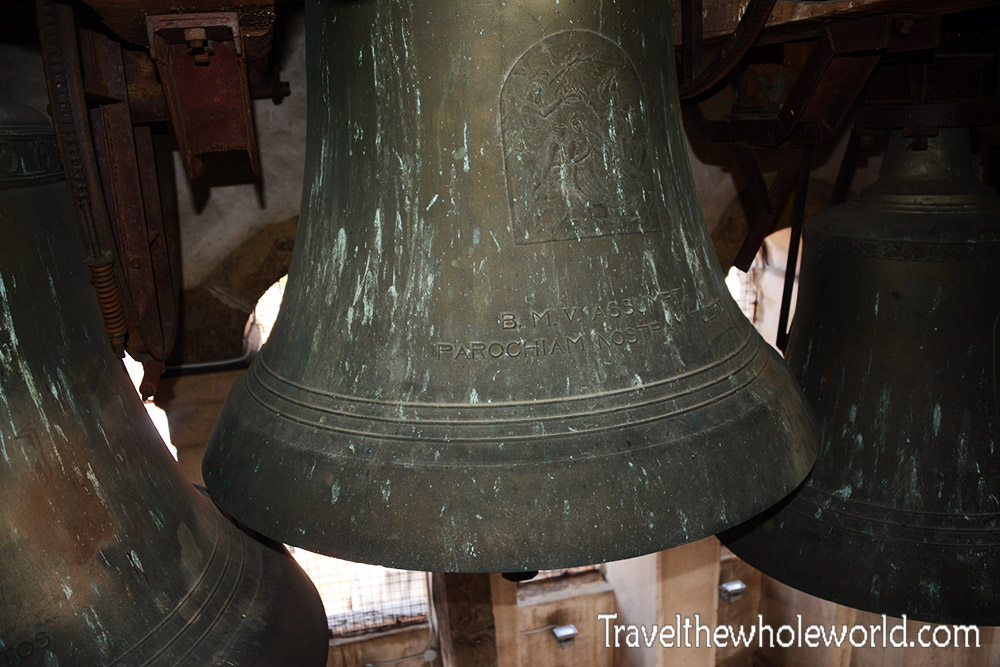 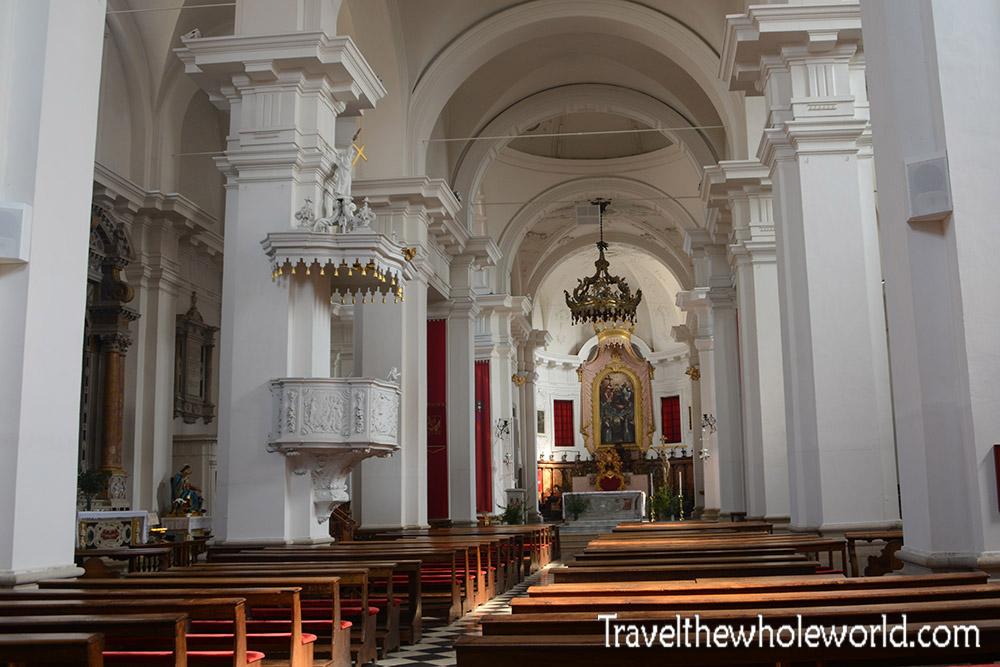 The problem with not having a guide is you often miss out on many things. I had full confidence to explore this city on foot since I had been here once before. After entering the cathedral, I also later found out that there’s a famous painting by an Italian artist known as Vittore Carpaccio. The painting is called the Holy Conversation and dates back to the 1500’s, and of course I totally missed it. These two photos are from the inside of the Cathedral of the Assumption, with an impressive but not as famous painting below. 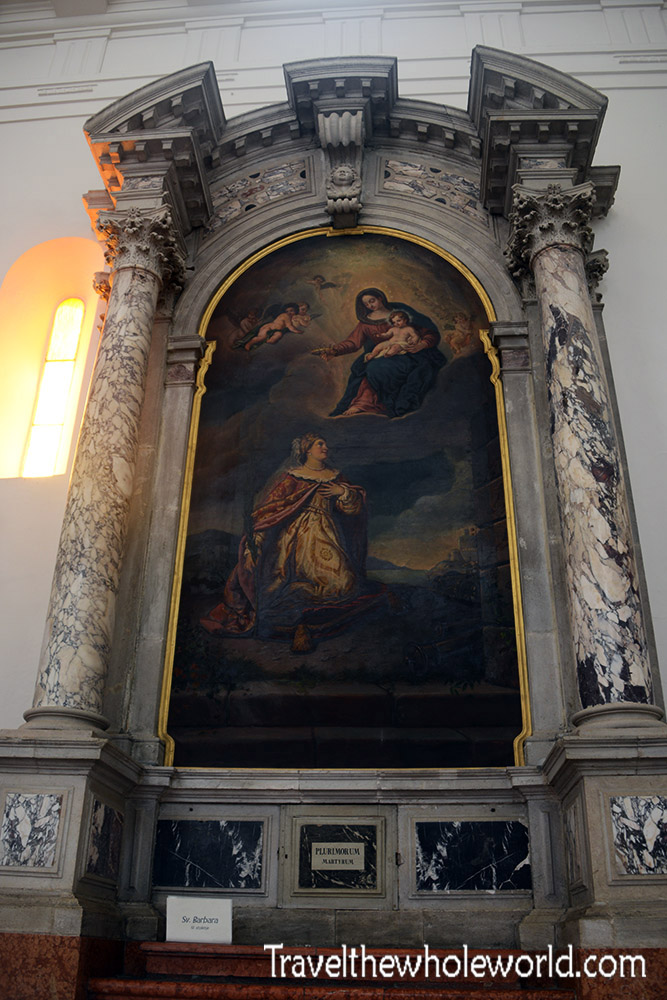 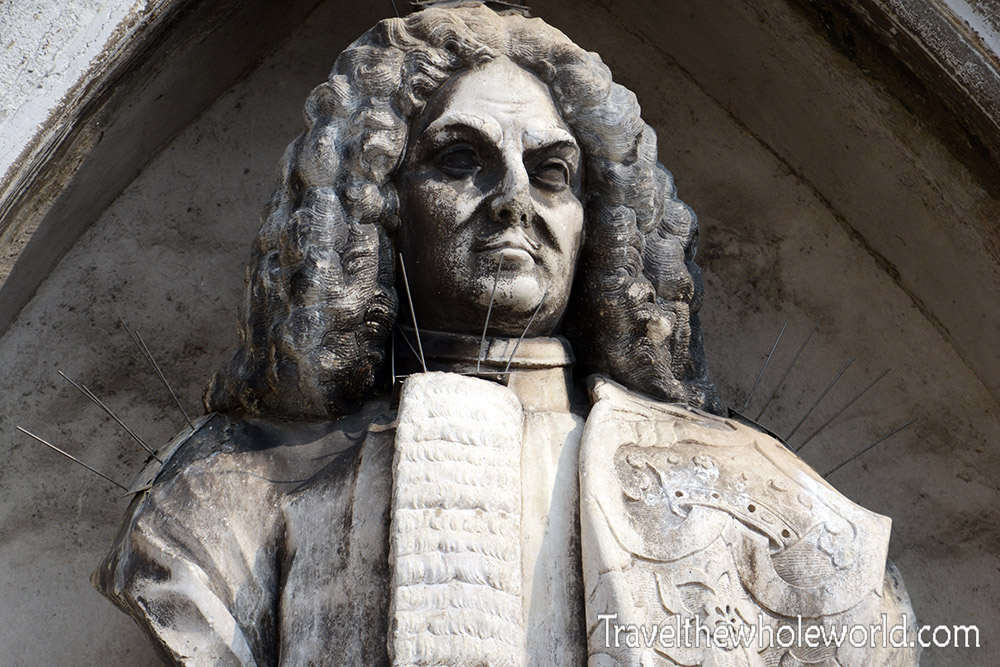 Well I hope this guy did something truly incredible, like save the entire planet from total destruction. I put more effort than I’d like to admit in trying to research who he was after going through my photos. I got lots of false leads by trying to google busts and statues of Koper and nothing of significance. The message below the bust was written in Latin, so I believe him to be an important figure from the Roman times. 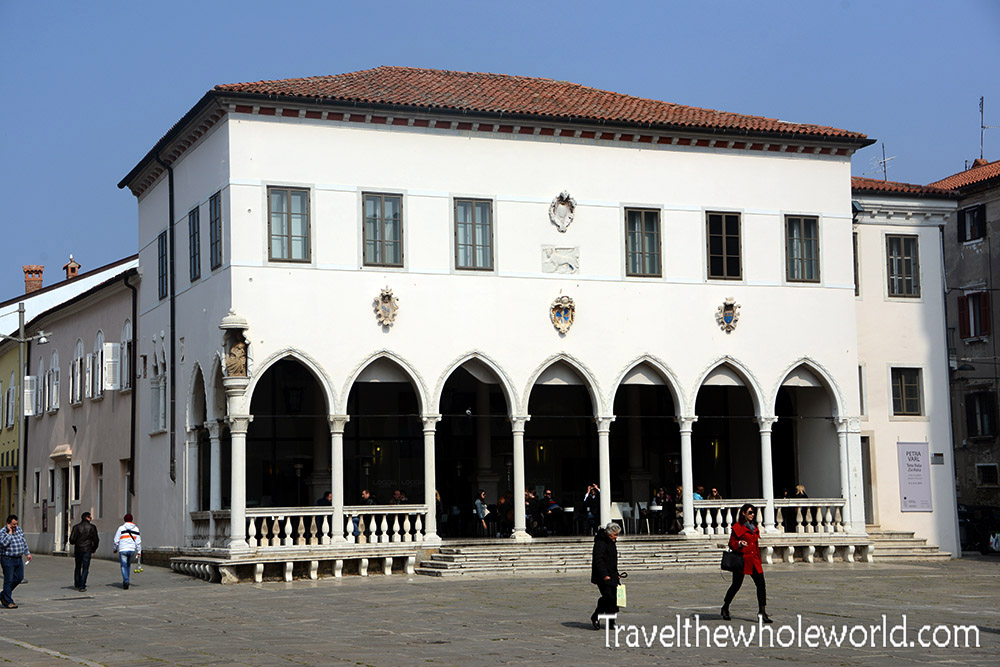 These two pictures show another building in Tito square that looks historic, but it’s actually a fancy cafe. I came here to relax and tried to get lunch, but they didn’t have much of a menu and seemed to be focused on drinks. Many locals seemed to like to lounge around Tito Square, so for me the cafe was a nice place to relax and people watch. 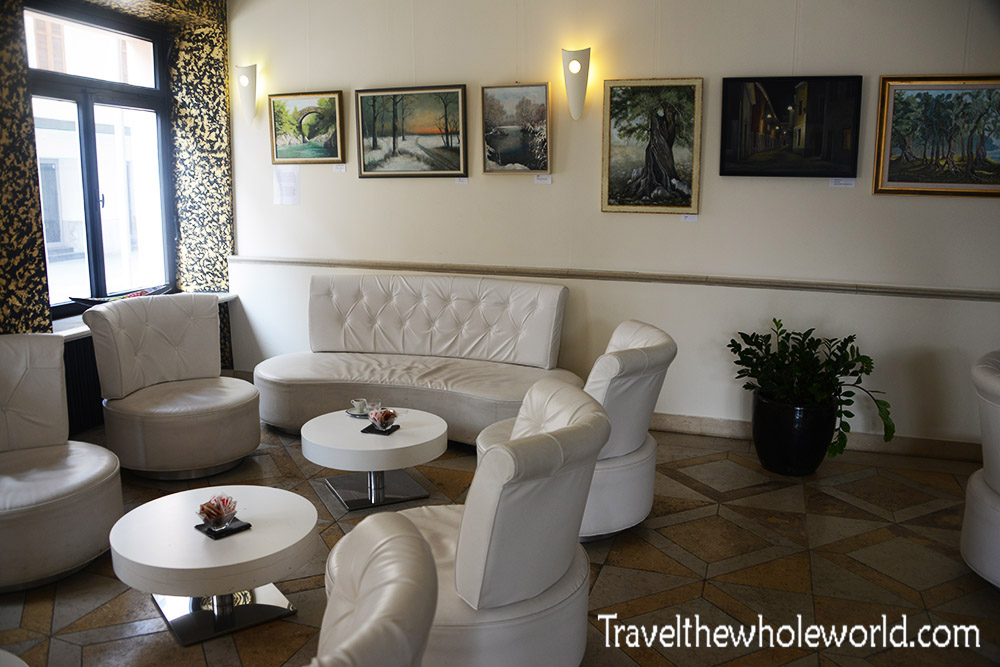 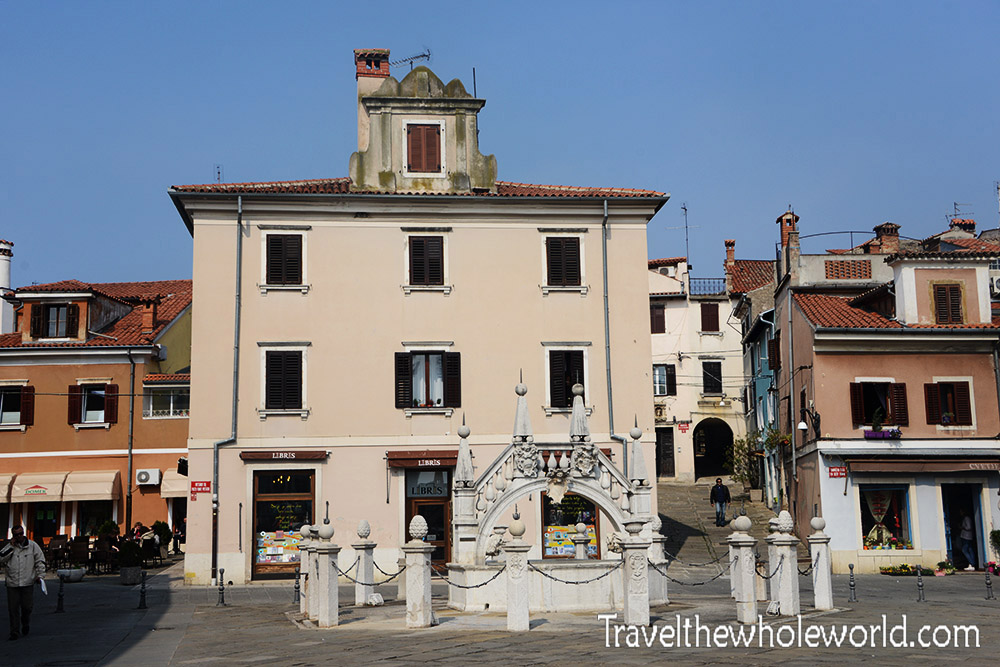 The small buildings and seaside town feel are what Koper an enjoyable place to visit. Above is another part of the old city, and a narrow alley below. 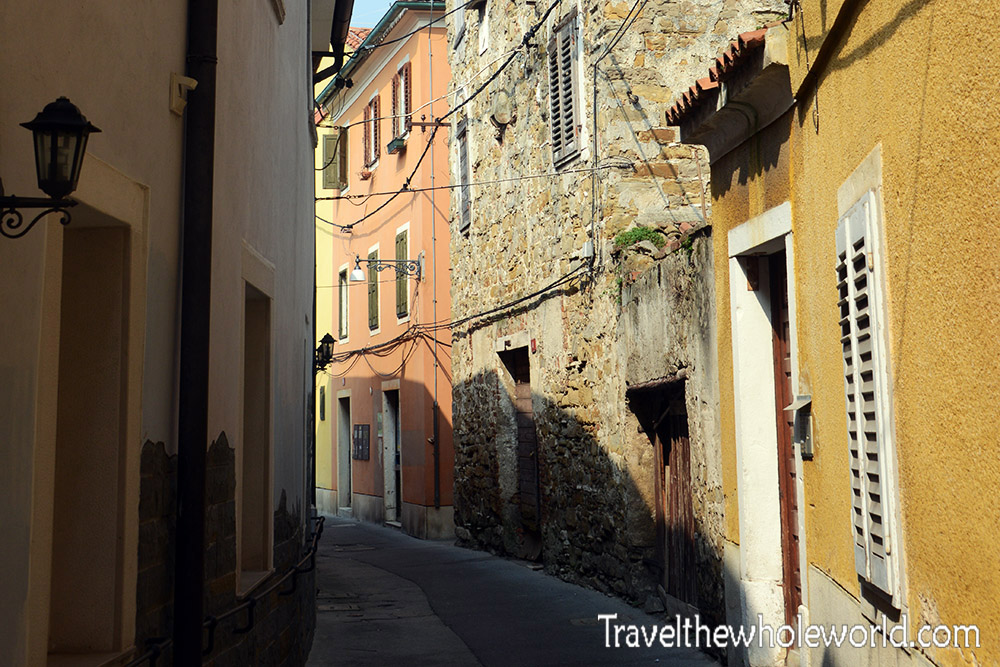 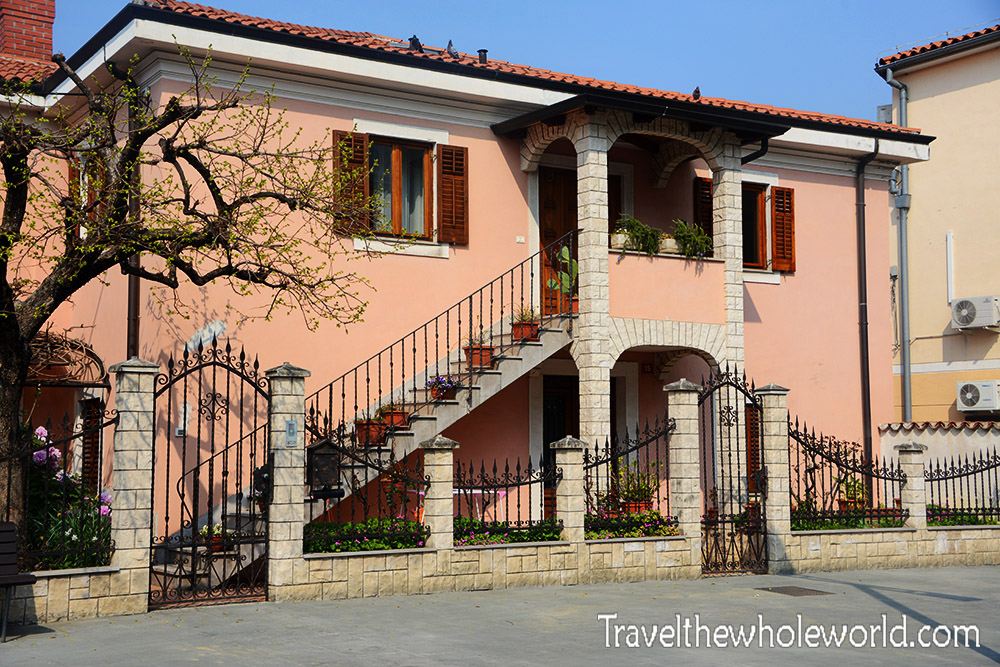 I’m not sure how much real estate costs in Koper, but I imagine it couldn’t be too expensive at the moment. This house was one of the most beautiful I saw in the city, and I’d be curious what something like this costs. Not all parts of the old city are in great condition though. This roof below is showing some signs that it’s in some desperate need of restoration! It also looks like the house got hit by a small meteorite, and might be the best fixer upper in Koper. 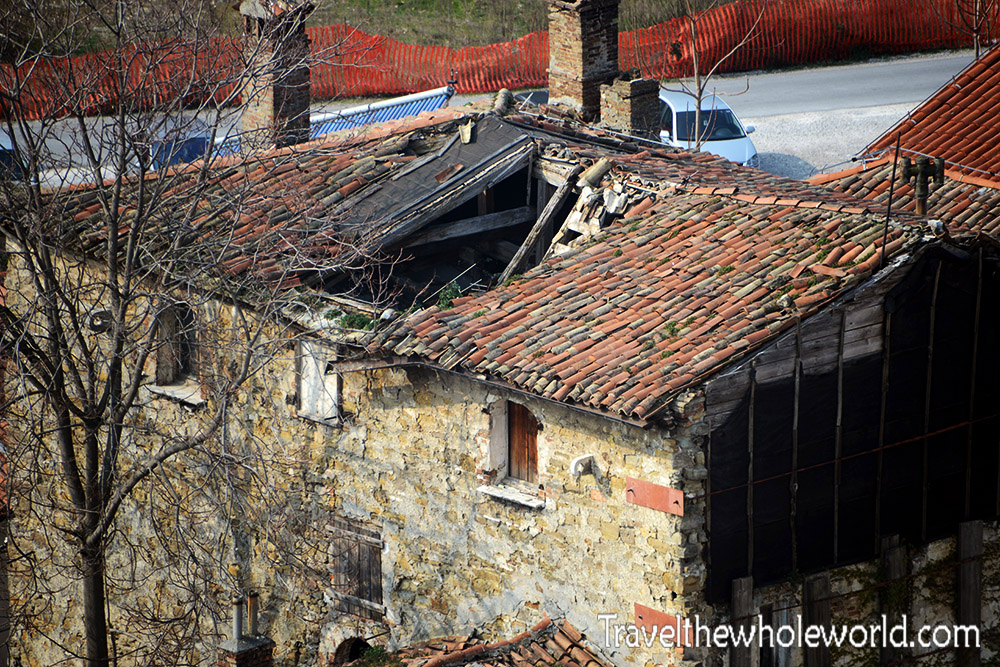 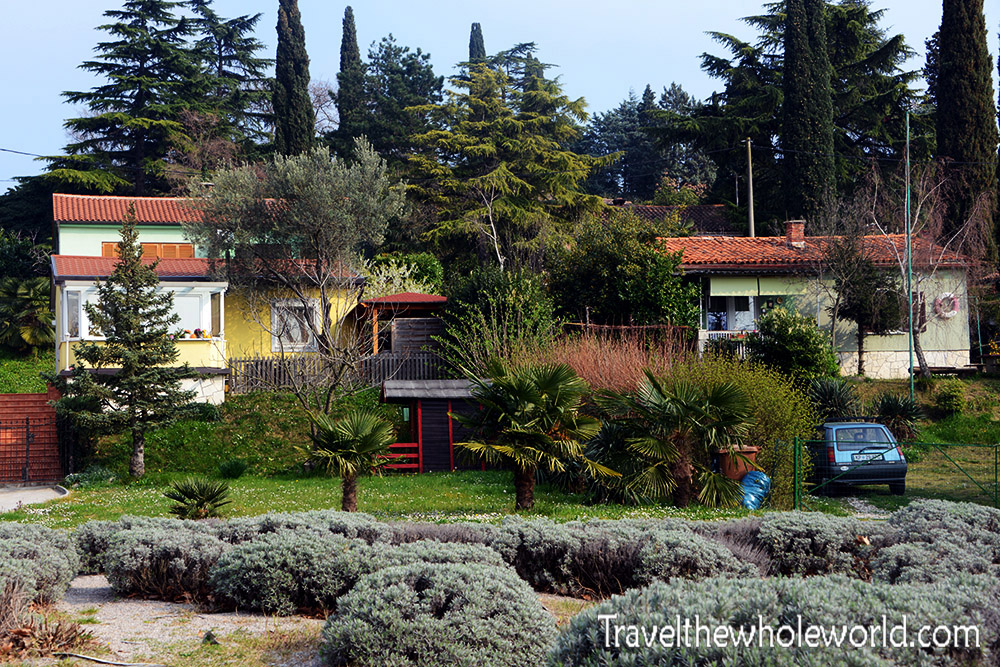 Other houses in the colorful single family houses in the area look like they could be from parts of northern California. Palm trees, those elongated evergreens, and some of the other plants in these yards are what remind me of my time near Fresno. 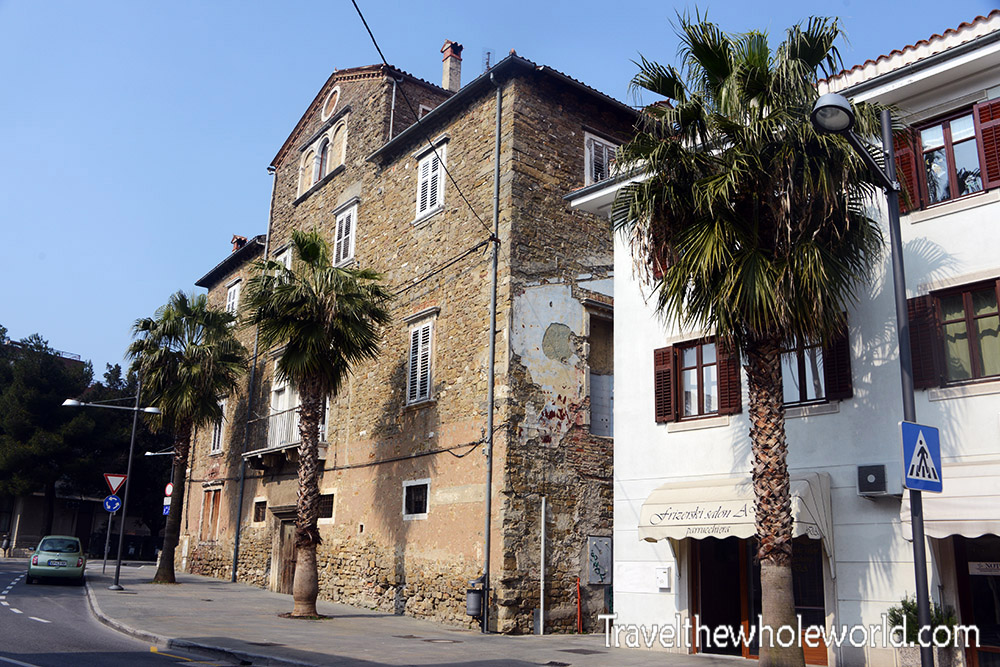 The palm trees were definitely something unexpected for me. When you’re walking around the Koper you definitely feel like you’re much further south than you really are. Koper is at the same latitude as the US state of Maine! I would have imagined Koper to be a cold and windy city at the northern ends of the Adriatic sea. Bohemian jazz players and palm trees would not have been my first guess. 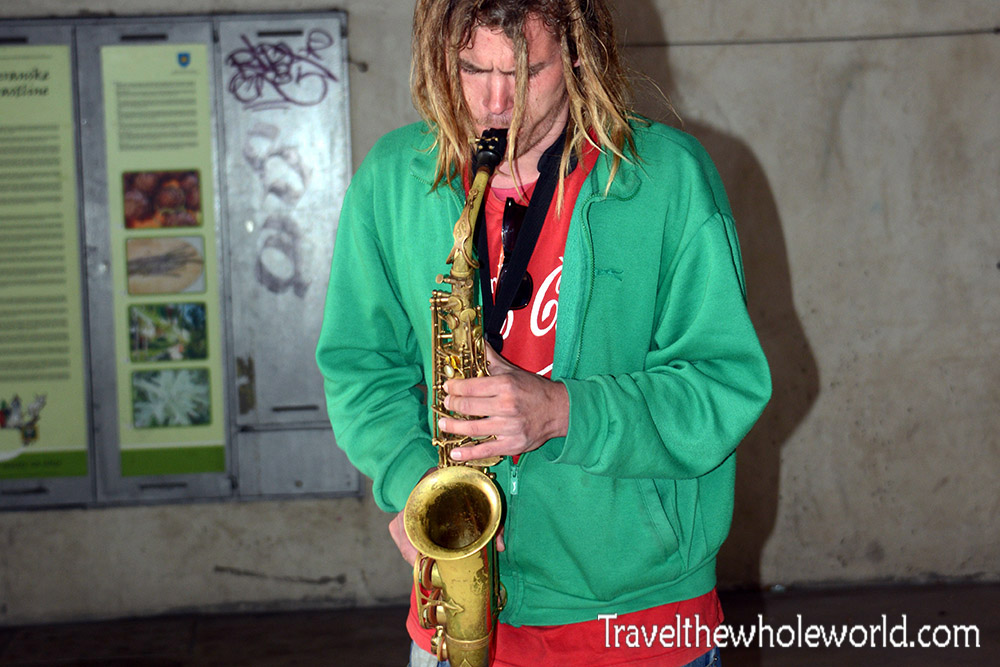 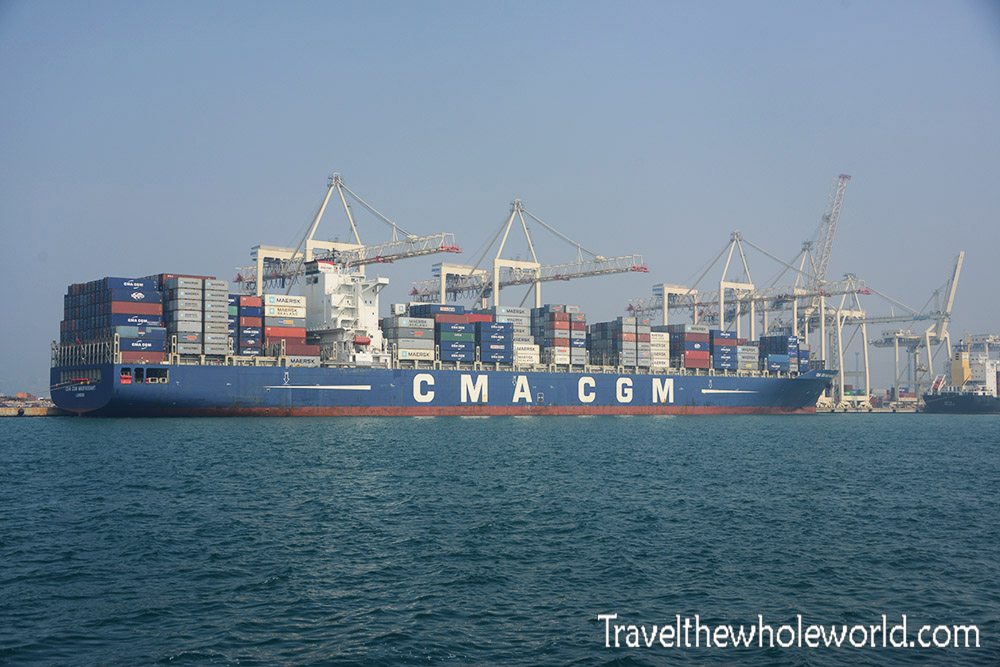 And lastly, two photos of Koper’s port. Even though the city is on the Adriatic sea, you won’t find much of a beach here. I’ve heard there is an area by the port where you can jump into the water f you’re willing to pay a few euros. I didn’t find the area myself, but I imagined a concrete slab along some ice cold water that would be more of a challenge rather than a fun experience. The first time I ever visited Koper was when I was in the Marines, and our aircraft carrier docked directly at their harbor. I really had a great time back then and was happy to revisit ten years later. 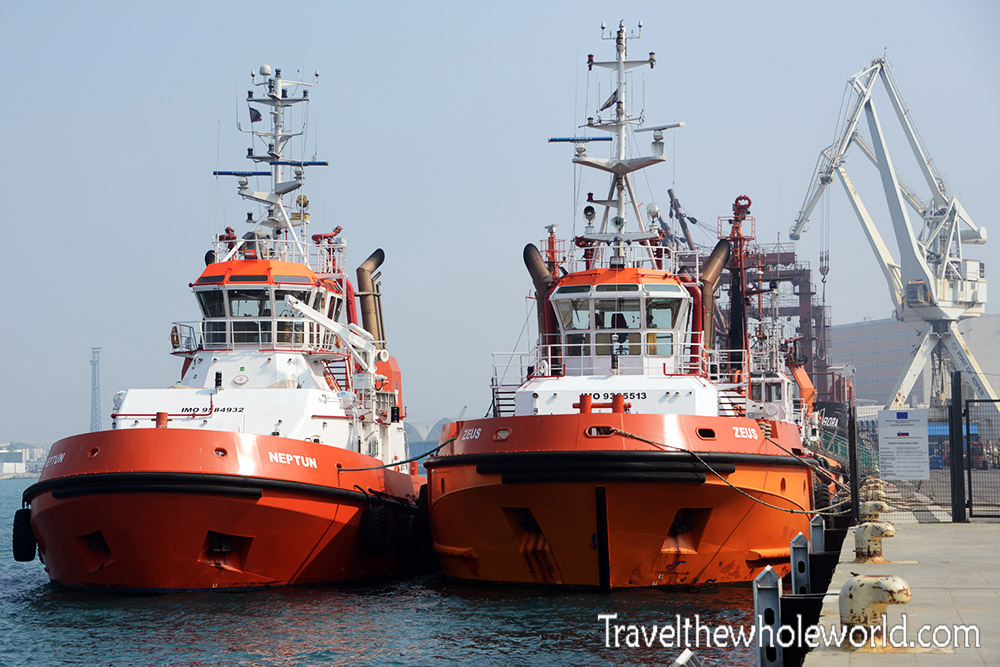