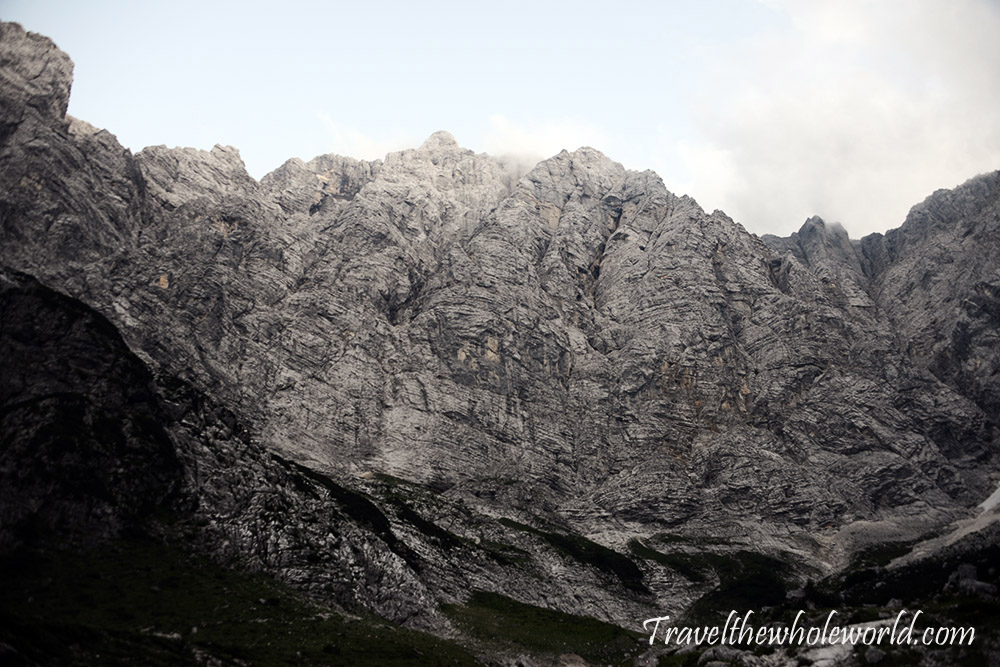 The highest peak of Slovenia and the Julian Alps is Triglav. The peak resides entirely in Slovenia, although it’s a short distance from the Austrian border. At 2,863 meters or 9,393 feet, the mountain isn’t very high, but makes up with this with its dramatic north face. The north face of Triglav rises over 1,600 meters or a full mile from the valley floor below. This photo was taken from closer to the base of the mountain, but it looks much more impressive from a distance with better perspective! 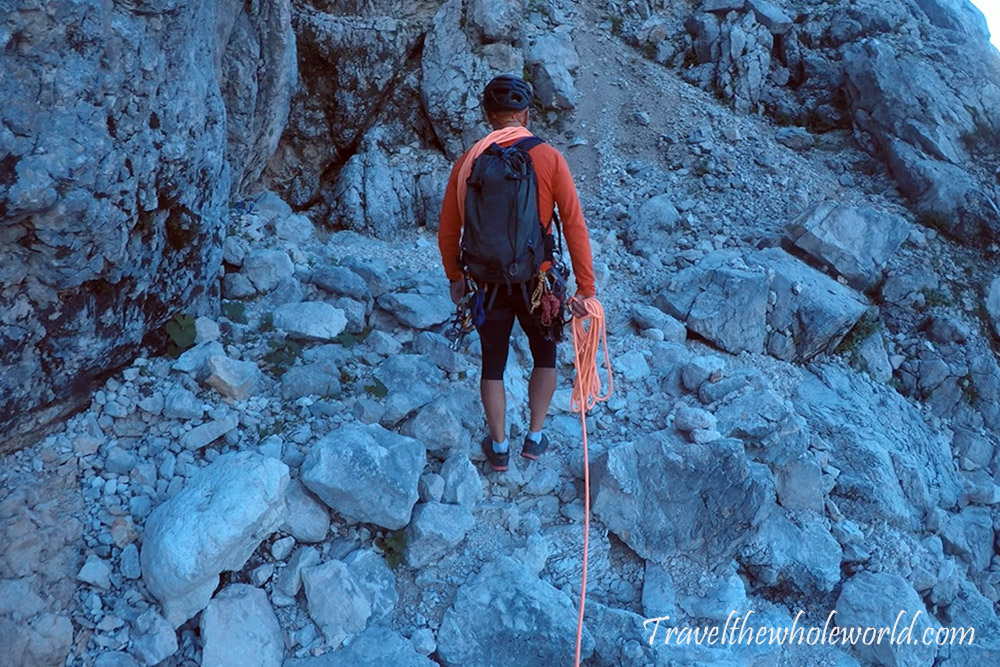 Of course, there are multiple routes that lead to the summit of Triglav. The standard route is a class 2+ trail, which means its mostly hiking but there are a few sections where you might need to use your hands. There’s actually a bit of exposure for the standard route, and for that purpose the trail is a via ferrata, which means there are fixed handrails and handholds where necessary. I had climbed several class five routes by the time I came to Triglav, so had long ago taken a climbing knots class, and gained all the necessary experience. What set this route out from others was that this would be my first true wall climb. Although my previous climbs were much harder in technical difficulty, they were incomparable to the full vertical length and commitment of the climb. We left the car at 5am and hiked in darkness to the base of the peak along the normal trail. Close to the base of the peak, we roped up and went up some class 3 terrain. 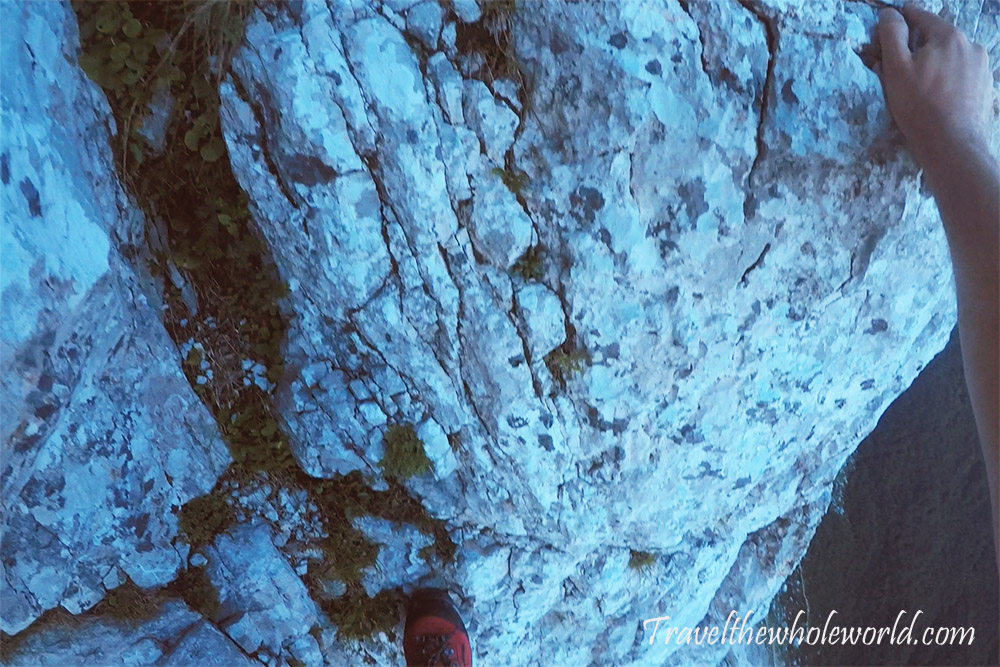 Triglav has two options for the German route. There is the short which is 2,600 feet (800 meters) of climbing. This has an option to exit, or you could continue up the Long German route which is another 1,600 feet (500 meters). It wasn’t until the day before that I learned the Long German route doesn’t even hit the summit. As it turns out, it stops short about 1,000 feet or 300 meters. My understanding is this is normally for time purposes, and some even plan to do the Long German route in two days. The normal time for the climb is a two hour approach from the car to the base, followed by another five to seven hours for the short German route. Since I had never done any climbs this length I wasn’t sure how I would do, and to be honest was worried I might have to abort so we figured we’d focus on the Short German route and see what happens. After a short time on the scramble we made it to the first pitch on the Short German route, and so we were off! 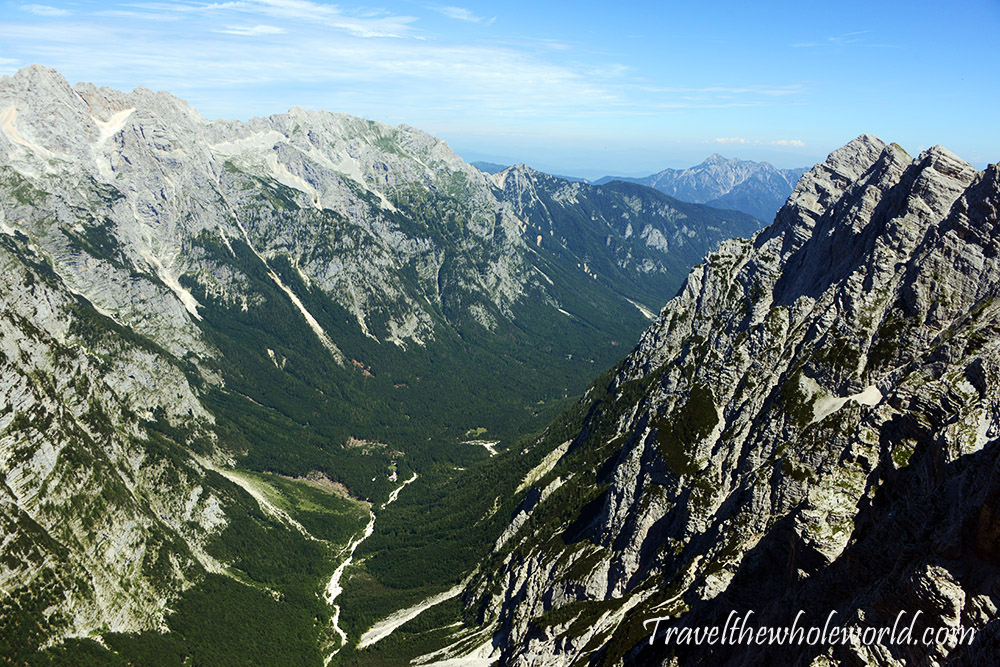 The pitches on the short German route are mostly low class fives, with a maximum of 5.5 YDS or a 4 on the French scale. I never felt challenged by the moves on the Short German route, but I did dislike all the loose scree and handholds. I was able to shake some of the large rocks that I was grabbing, so had I put my full weight on them they definitely would have come out. The great thing about the easy class five was that we were able to go up rapidly. These pictures above and below were taken from the Short German route after we gained some respectful elevation. 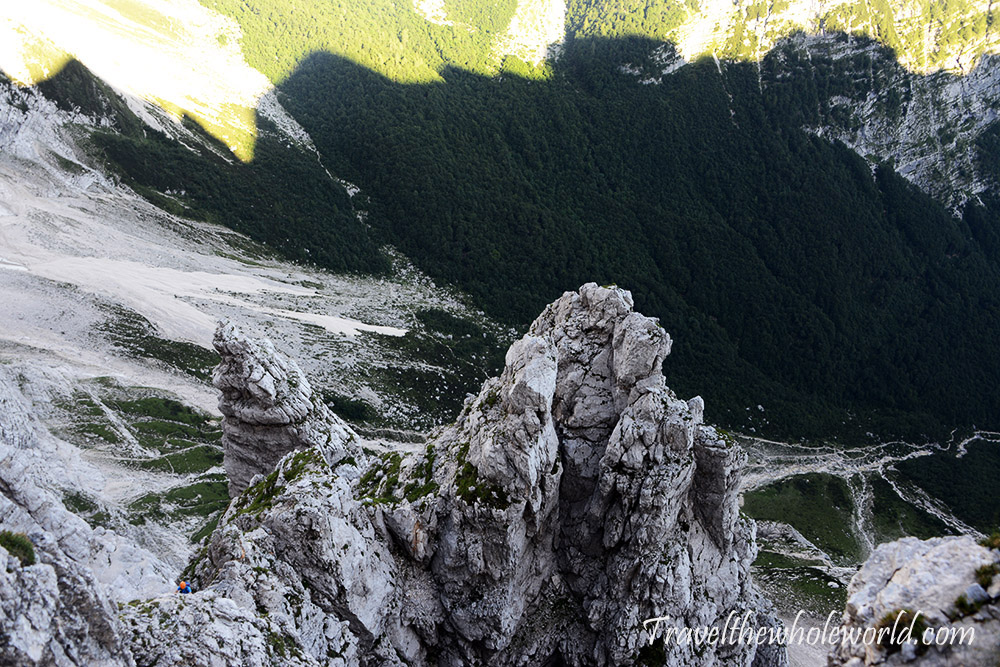 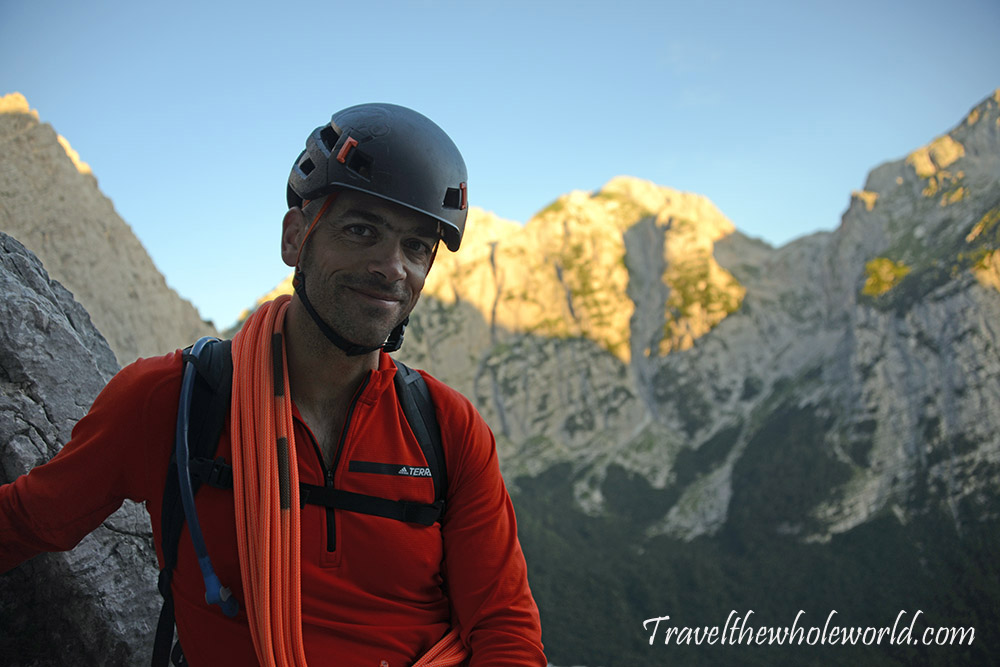 In all honesty we mostly simul climbed and I don’t think I belayed the guide a single time from the short route! I had asked if I could lead some of the pitches but for legal guiding reasons this was a no go, although I’m sure I could have without issue. In addition to simul climbing, we traversed a lot of terrain on short ropes without using any pro for speed. If you included the approach, it should have taken us seven to nine hours to top out at the Short German route, but instead we finished it in about five hours and I was still feeling strong. 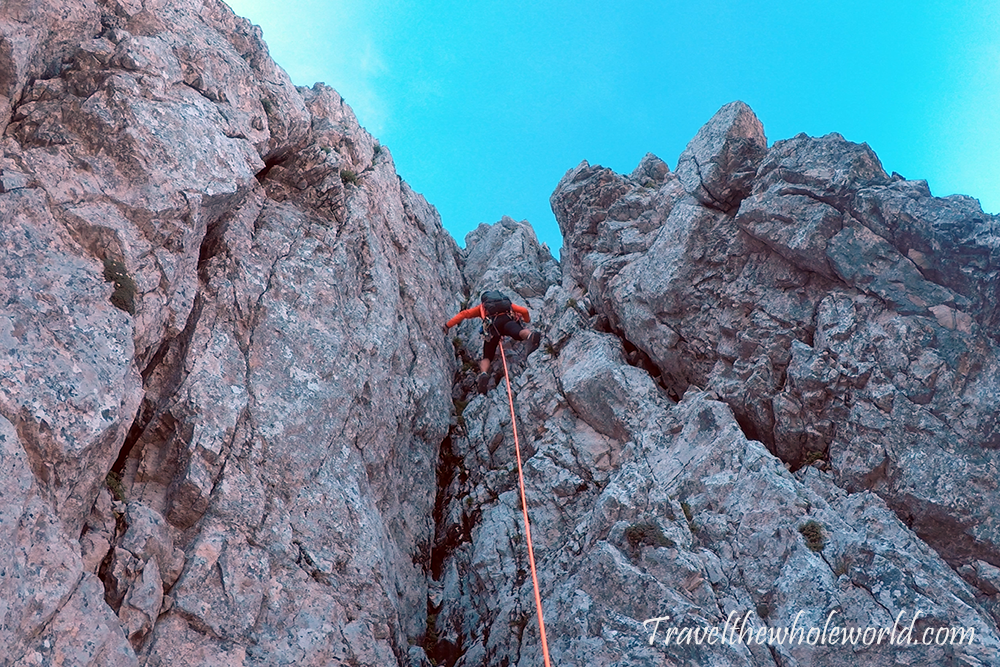 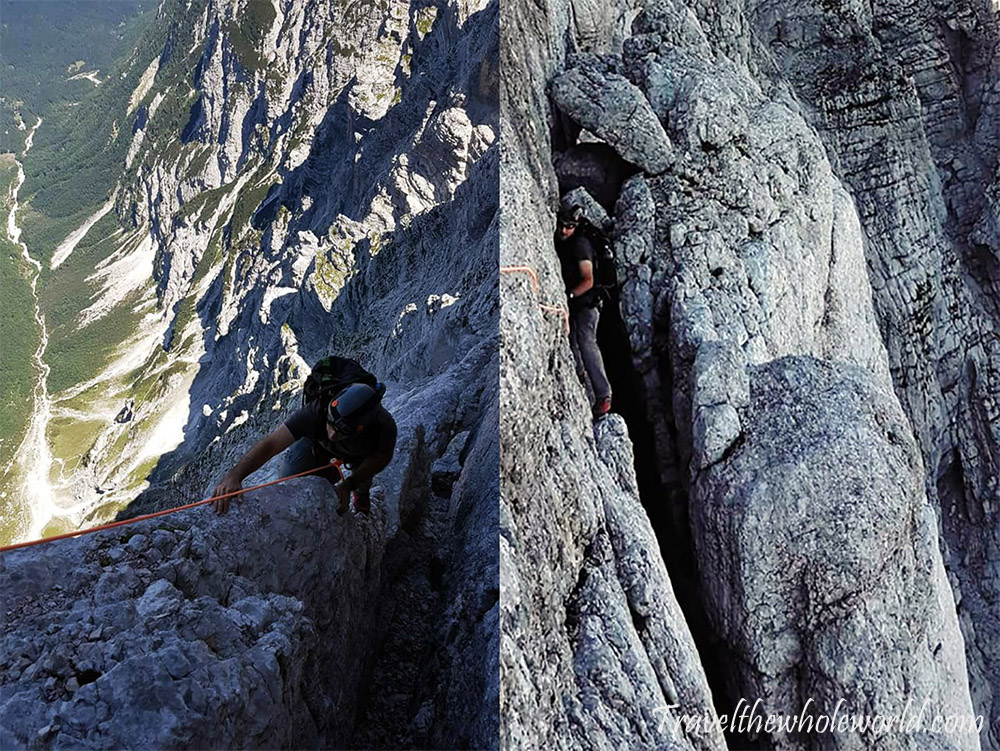 Since we were good on time we continued up the Long German route, which was a grade higher than the short. There was still lots of low class five pitches, but some of these went up to 5.6 YDS or 5a on the French scale. Once again nothing overwhelming, with only two parts I didn’t like. In this photo above on the left I’m going up some very easy low class five. On the right you have to traverse on the left on that narrow scree covered ledge. The handholds weren’t great, and I wasn’t used to climbing with actual big boots on, so I worried my foot would slip off the ledge from the small holds and all the loose rock. It looked harder than it was, and when I crossed over I didn’t feel at risk of slipping. If I had of course I was on a rope, but would have swung out into the sky which wasn’t on my list of things to do for the day. Not to mention that while we did occasionally place pro, the vast majority of the time we used ancient rusty pitons that were already on the wall! Probably they’d be fine, but probably also isn’t a good word to use when you could be at risk of a huge fall. 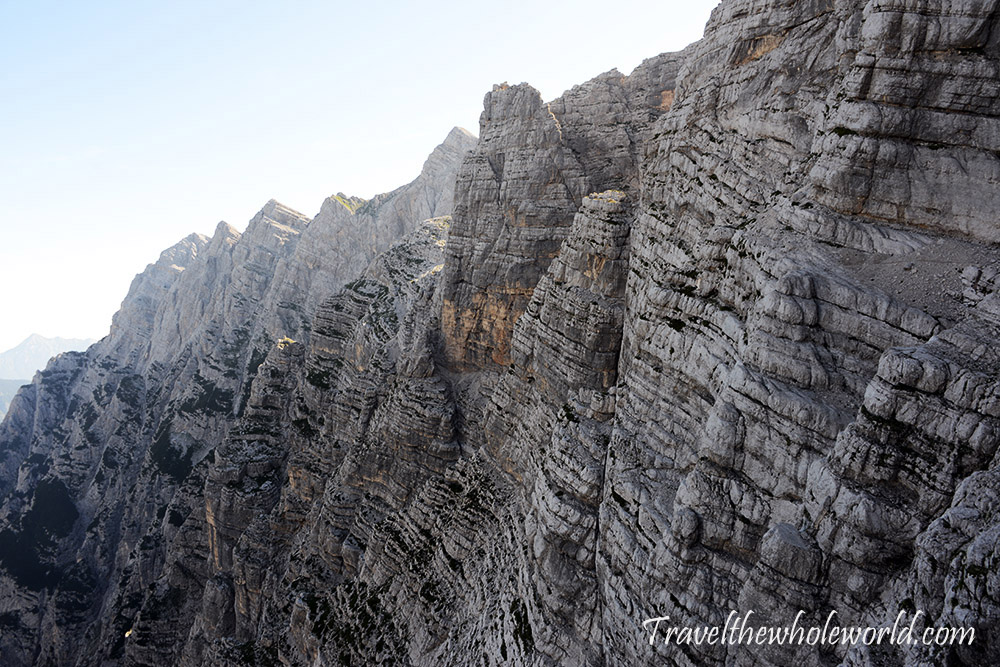 The Long German route definitely was slower because it was a grade higher than the short, but we still made good time. At some point along the way up I stopped to take this photo of the adjacent walls around us. It was a perfect day for climbing, and the views of the valley and walls around us were amazing. 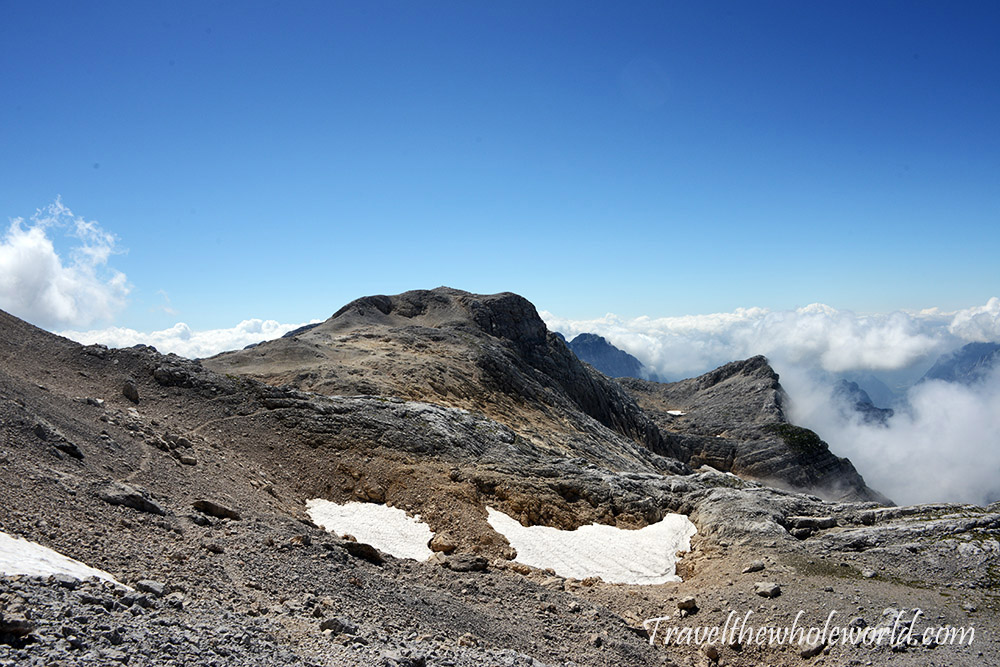 I didn’t understand exactly why the Long German route didn’t continue to the summit until we had topped it off. This route places you at a shoulder on the north face, where oddly enough after all that wall climbing you suddenly are surrounded by flat terrain. You can see some trails in the distance of the photo above. These trails just give you an easy way to walk off the mountain, but are not part of the normal route to the summit. The photo below shows the summit block which was the last remaining 1,000 feet. To be honest, by this point I was getting a bit tired. I wasn’t worn out but I was more than happy to take the walking trail to the top. Instead my guide pulled the rope out and started going up the summit block and I followed! 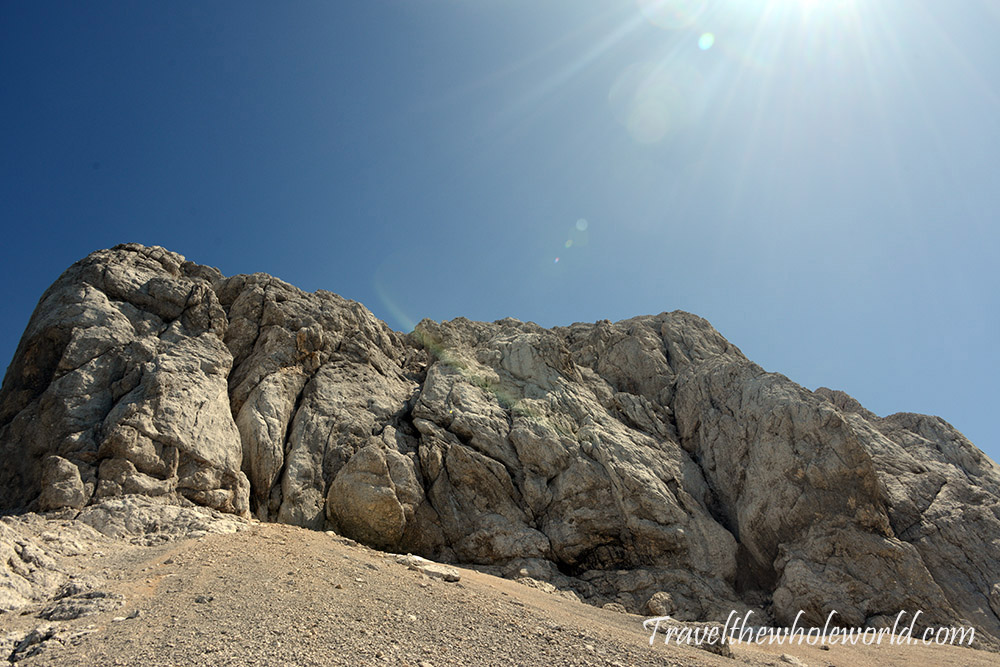 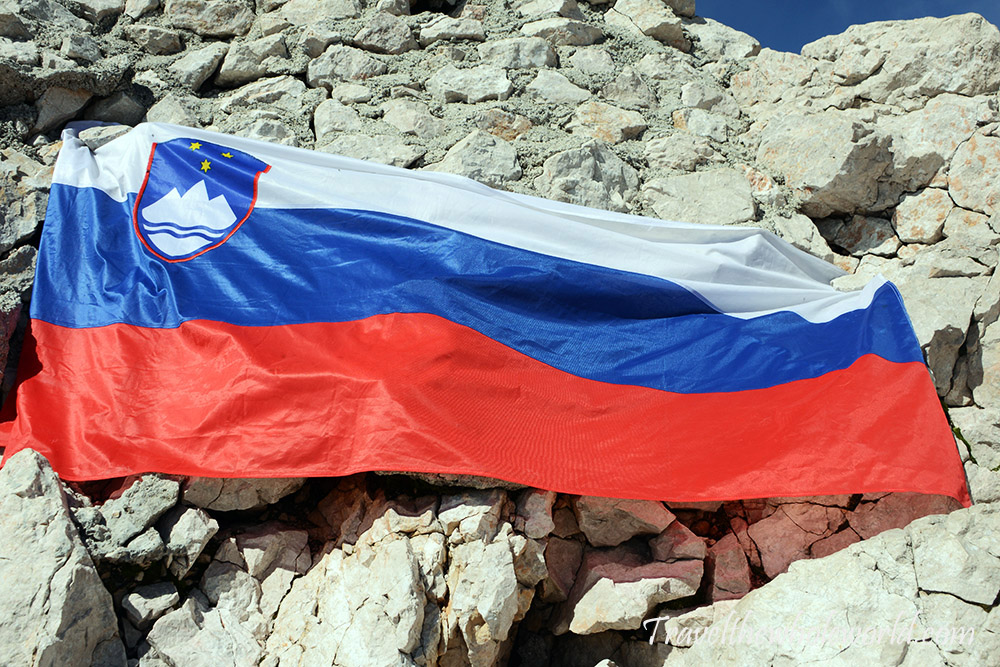 Annoyingly I had thought I turned my GoPro off to save battery. Instead I had turned it on to fill almost 30 minutes nonstop until the battery died. On the final summit block I didn’t take many photos with my phone, but to me the grade seemed as challenging as the Long German route. We even had a bit of route finding and descended a short bit to find an alternate way up. Once we hit the summit, I was grateful that I had climbed the whole way up rather than take the hiking trail after the shoulder. While we climbed the Short German route there were two other climbers below us, but after that we didn’t see anyone for the entire day. It seemed a bit bizarre to come up to the summit and see a large crowd after all that solitude. The photo above is the Slovenian flag, which is hung on the rock right underneath the large group of people posing below. I didn’t fight the crowd to get my photo here since there were so many people. There was even a guy who was selling a hybrid orange juice and beer drink, that tasted absolutely amazing 🙂 . 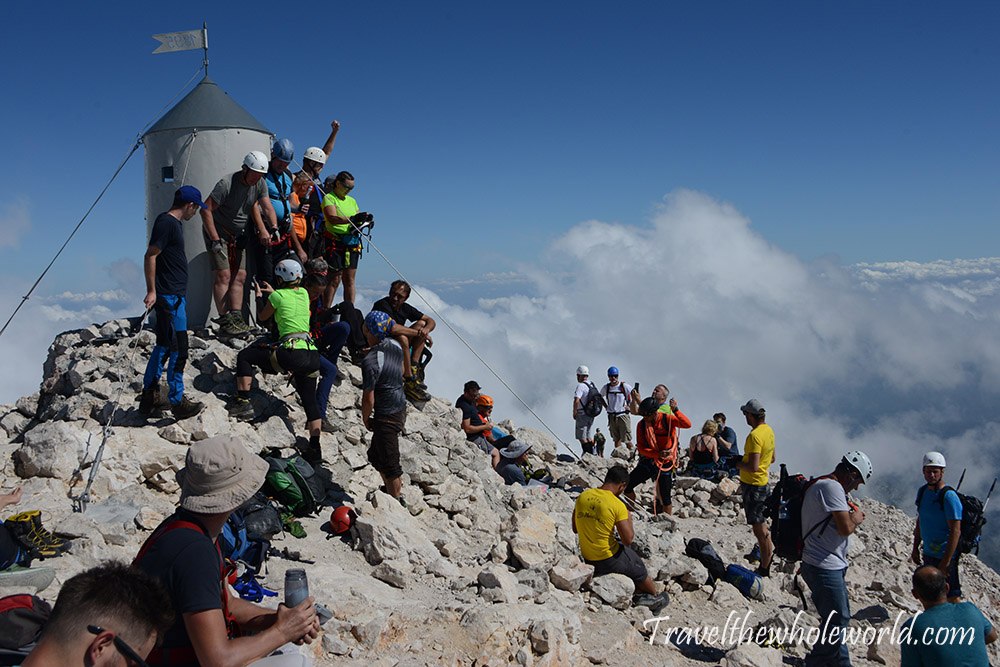 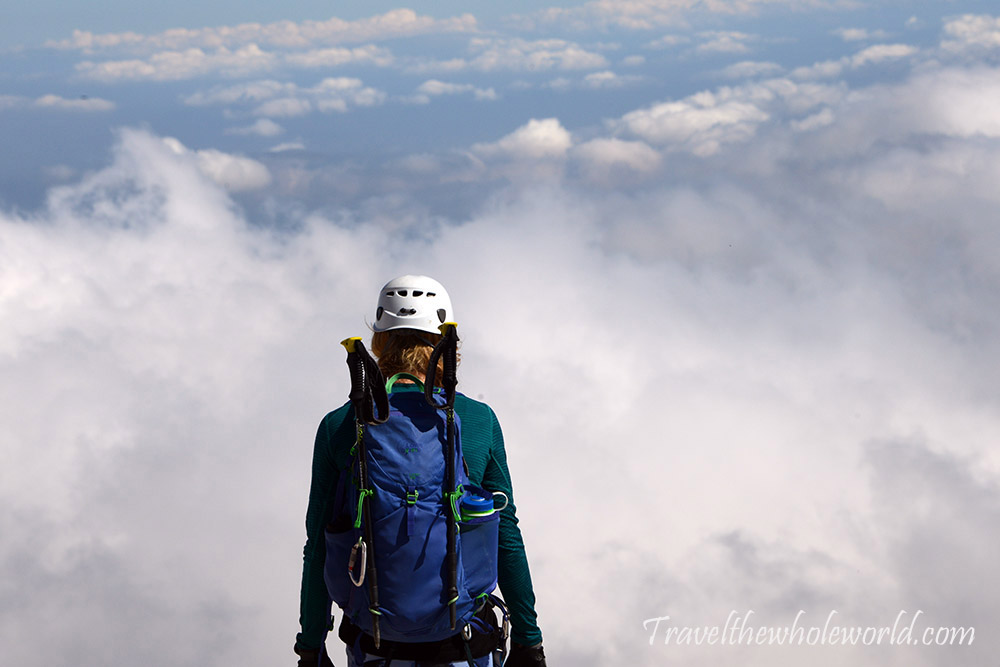 It would have been wonderful to rappel down the whole north face and let gravity do all the work. But with the pitons tucked away and no raps built into the wall, we had to descend by the normal route. The photo above shows a climber starting the descent from the summit. 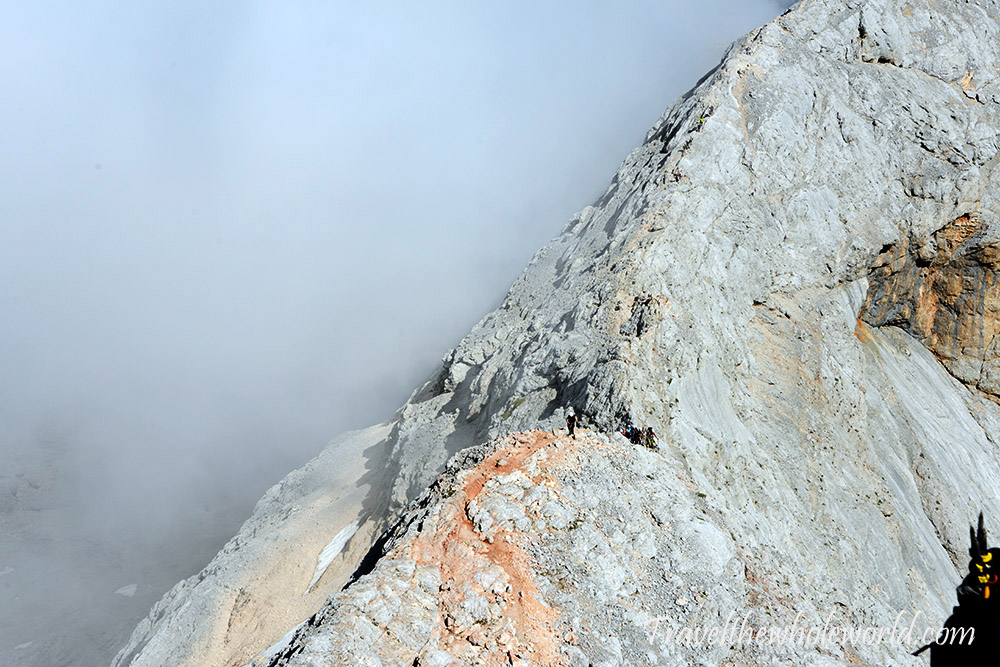 Here you can see the actual trail of the normal route. It’s of course not a vertical wall climb, but most definitely not a simple hike either! I found the descent to be annoying. We had 1,800 meters or nearly 6,000 feet to drop. The trail was steep enough and covered with scree that you couldn’t zone out and simply hike down. We had flown up the entire route, going from the car to the summit in less than 11 hours. On the descent I was feeling the pain and it took us over four hours to get to the car, for a grand total of 16 round trip. Even though on the return I had slowed down a bit, I absolutely loved this route and experience, and was happy we had done it in a day. My guide of course has climbed Triglav multiple times as well as much harder routes, but never went from the valley to the summit in a single day.