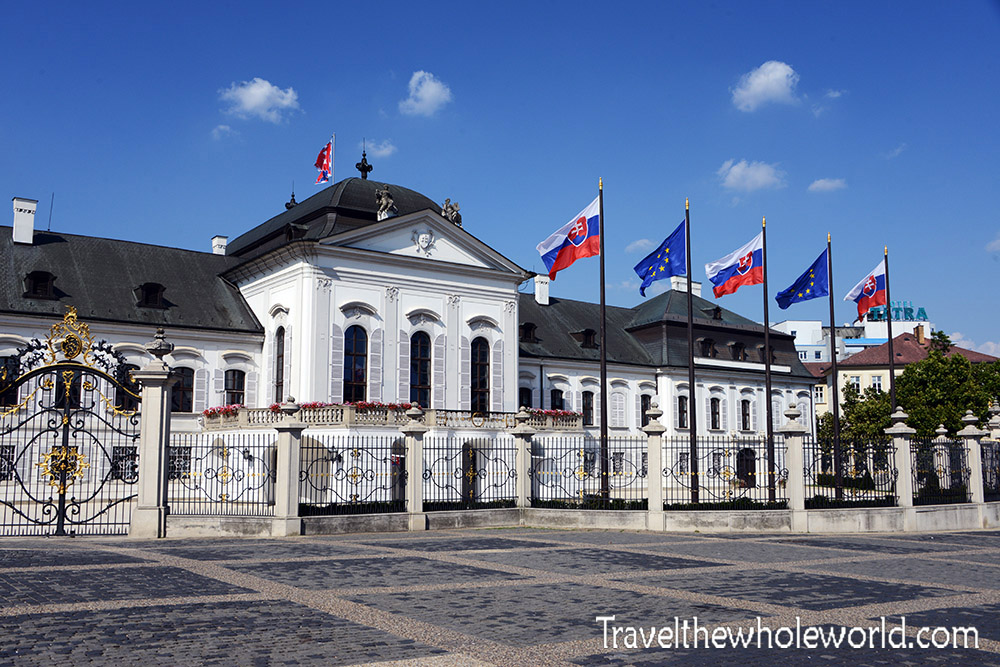 Bratislava was most definitely a pleasant surprise for me. I absolutely loved exploring the city’s random streets and alleys, while taking in so much history and architecture. While I was here one of my friends referenced the comedy movie “Euro Trip” to me, where some travelers showed up in the country to find it in deep poverty. I had remembered the scene but had no idea it took place in Bratislava. Luckily though Slovaks can laugh at this, since Bratislava has the third highest GDP per capita in all Europe! Despite this a visit to Slovakia isn’t painful to your wallet. The photo above shows the Presidential Palace, and it was literally a block or two from my reasonably priced hotel. 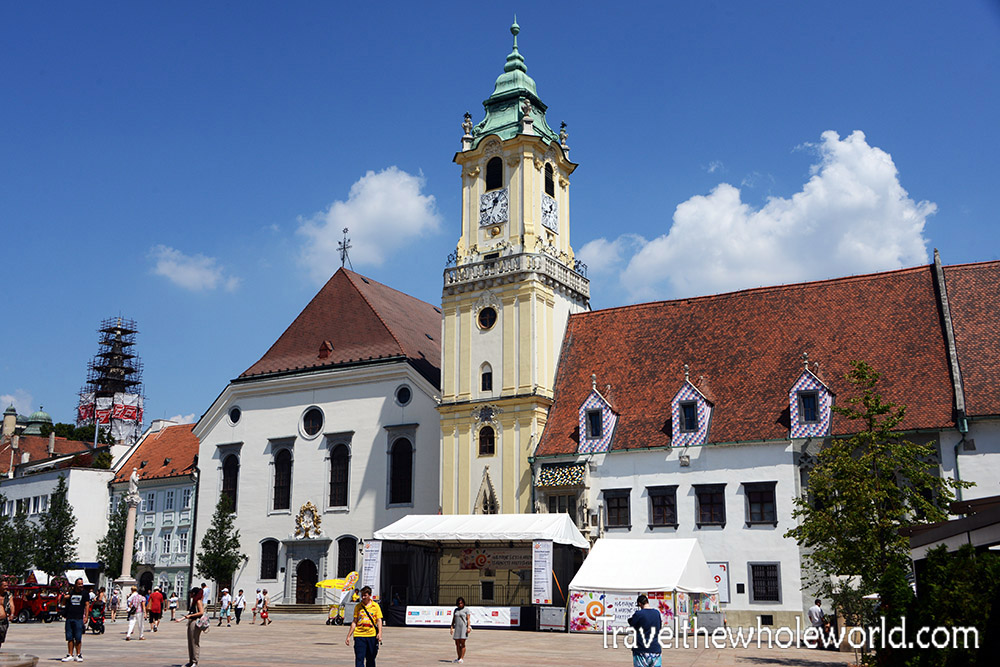 Bratislava’s old town is a massive sprawling historic district that dates back well over 1,000 years. I figured at first it’d cover a couple blocks, but found it was bigger than I had time to fully explore. The photo above shows the Old Town Hall in Bratislava, which began construction in the 14th century. I missed out on this, but the Old Town Hall is now the oldest museum in the city! Photographed below is the oldest theater in the country, the Slovak National Theater. 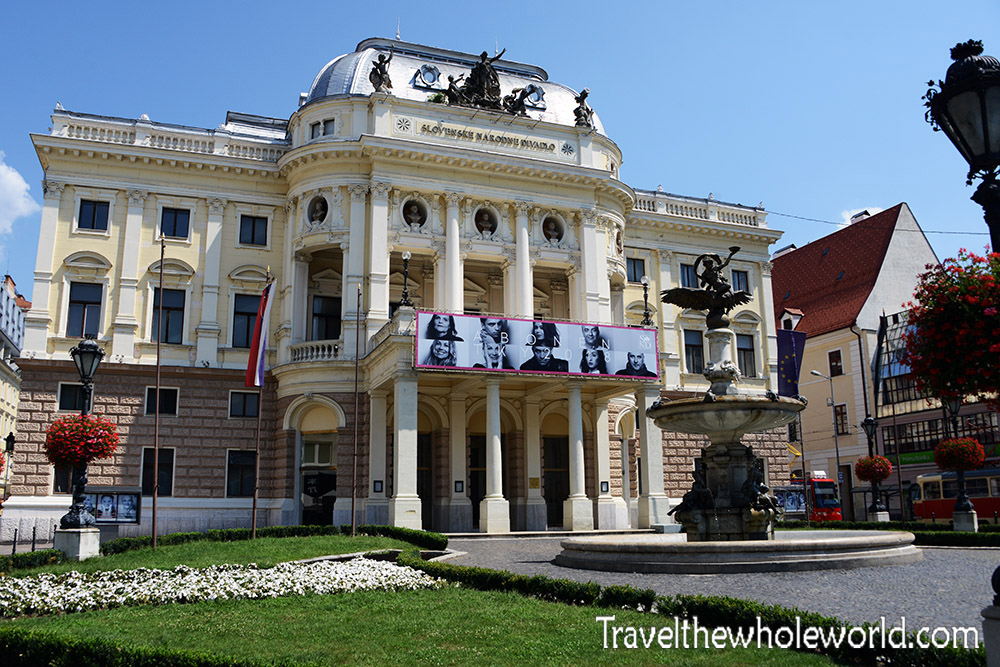 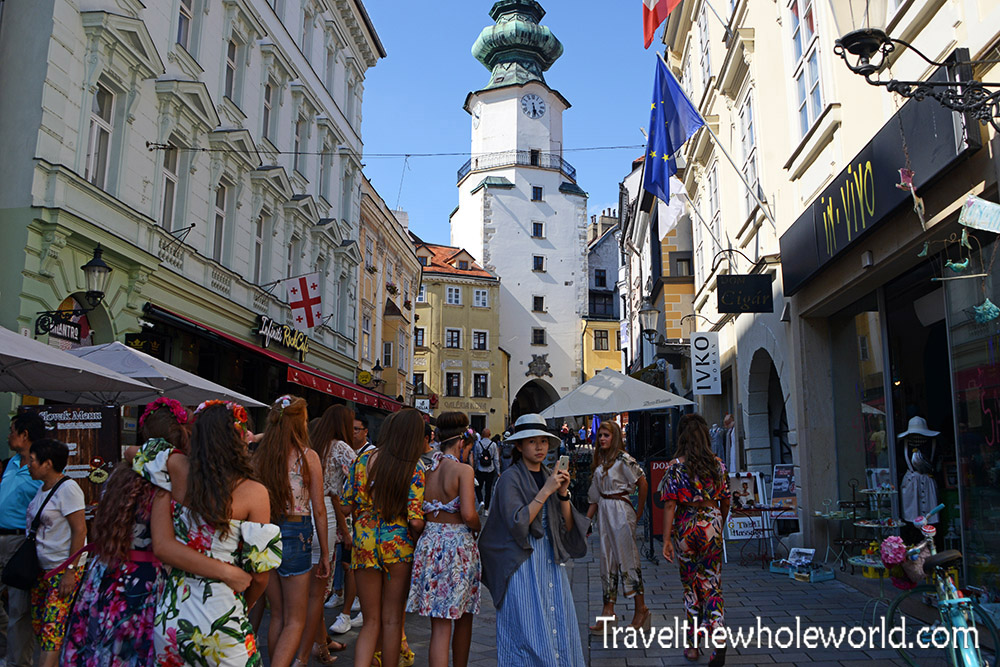 Perhaps the most famous landmark in Bratislava is Michael’s Gate. Bratislava was once fortified with a city wall and multiple gates back in the 14th century. Michael’s Gate is the only one that is still standing. Today the gate is surrounded by luxury restaurants and shops, and as you can see lots of people during the day. At first I was a bit annoyed that this group of intoxicated women walked into my photo, but I suppose it was part of the experience. 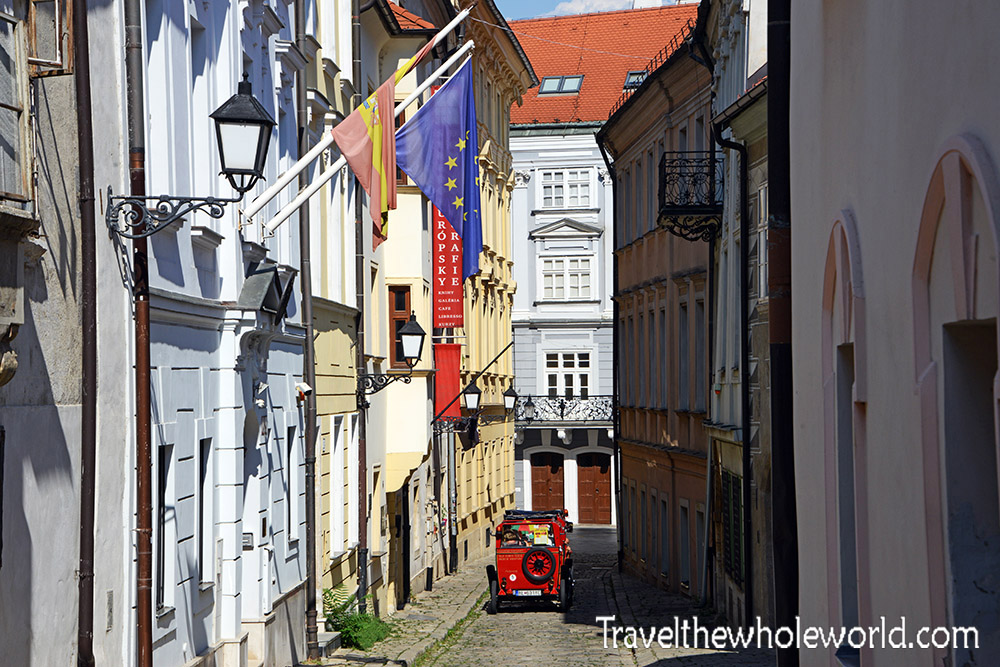 When I started exploring the city early in the morning, I found the streets were mostly empty and there didn’t seem to be much going on. At first I figured Bratislava didn’t get much tourism and was still a quiet destination in eastern Europe. Once the afternoon came around, I found the city was packed with both locals and tourists. I was surprised how many tours were going around the city as well. The photo above shows a car full of tourists going down a narrow alley, and below you can see they even had segway tours here, something I will never do :). 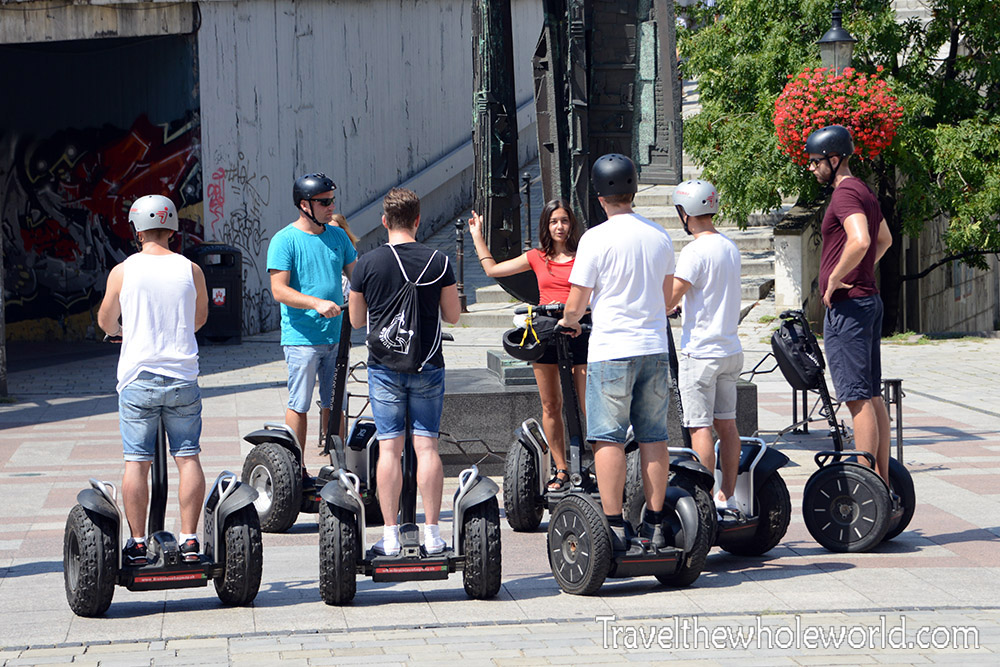 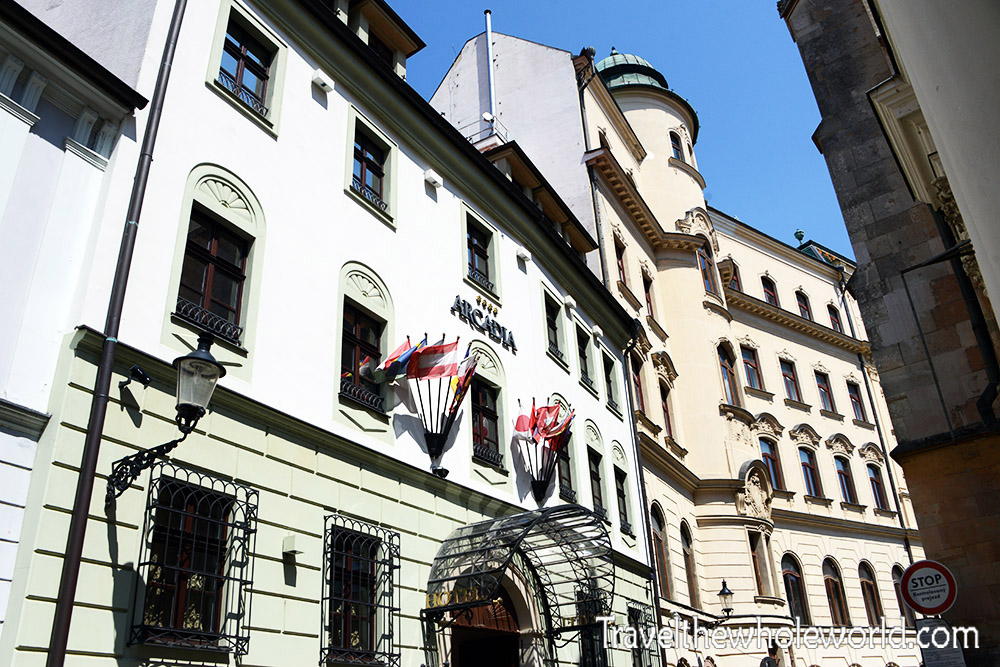 What I liked most about Bratislava was their smaller streets. This one above was near the city center and had a hotel much nicer than mine. I didn’t check the prices, but from what I saw nothing here was crazy expensive. On another random street on the outskirts of the city center I came across this building with a flag that I saw often. I tried to search for what it stands for, but I know nothing about it other than it’s not the national flag. 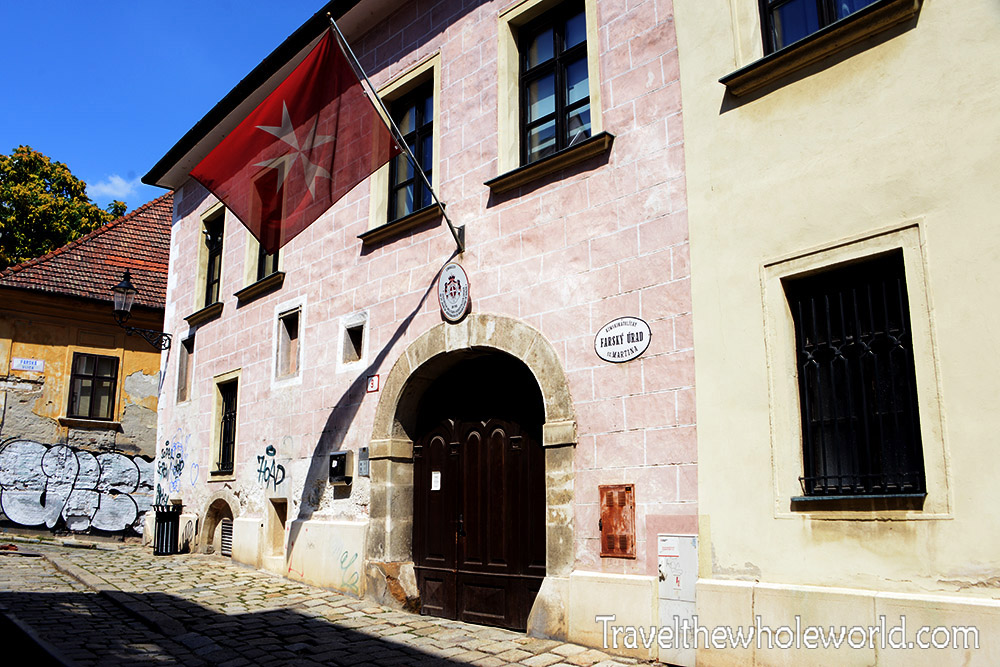 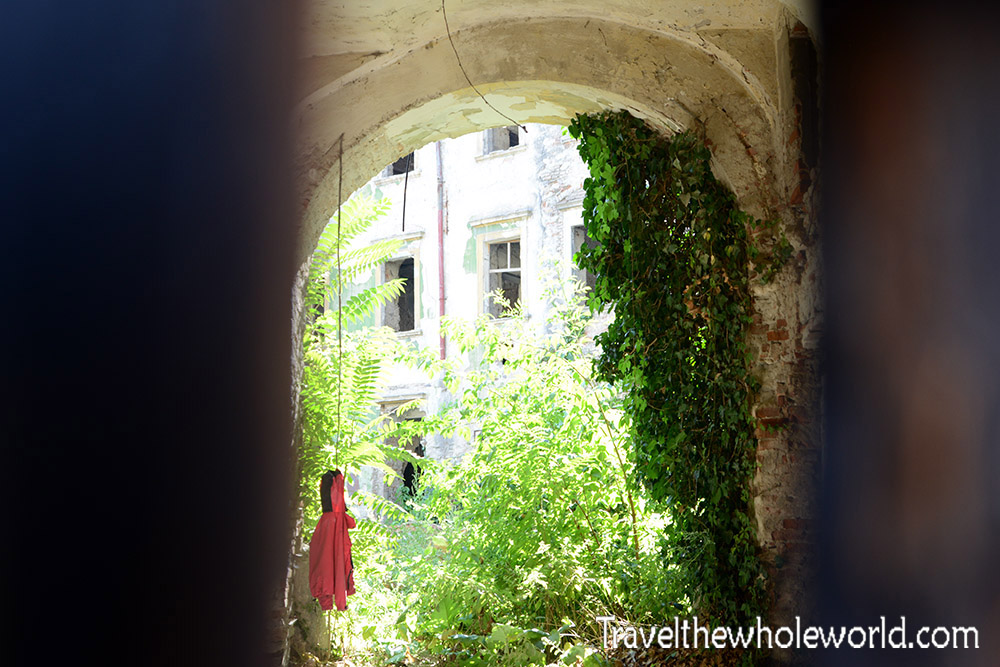 Most of Bratislava was in pretty good shape. I’m not sure if that movie Euro Trip was completely made up, or if things have drastically improved over the past twenty years. The few buildings I saw that were in really bad shape were under renovation like this one above. I did notice though that people liked to spray paint things here. It seemed the worst the building was the more open it was to be targeted. It looks like a someone even used a stencil and spray paint to write “Renovate me!” on the building below. 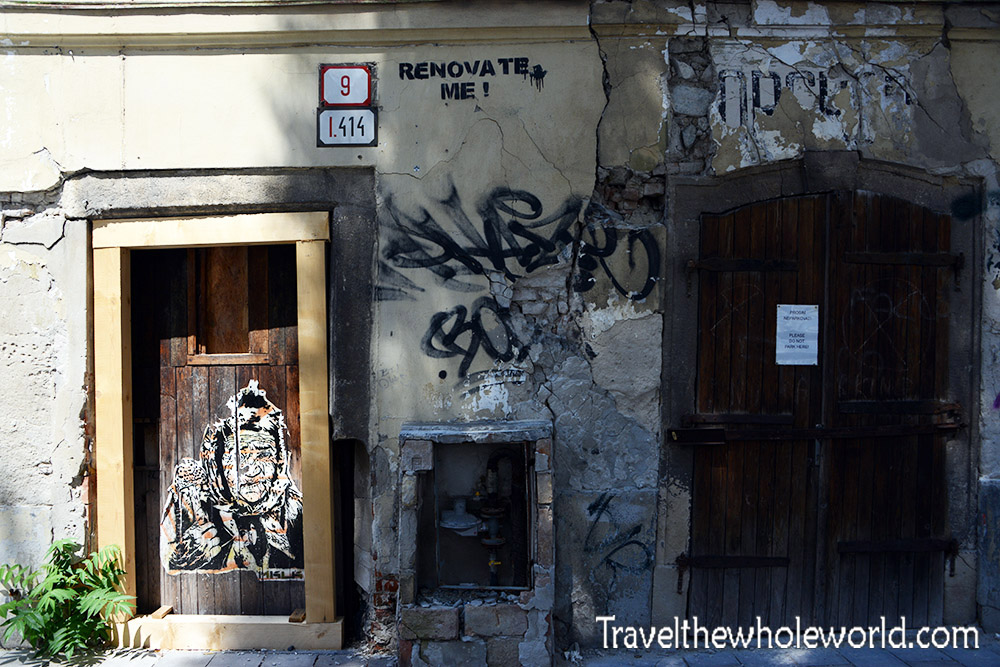 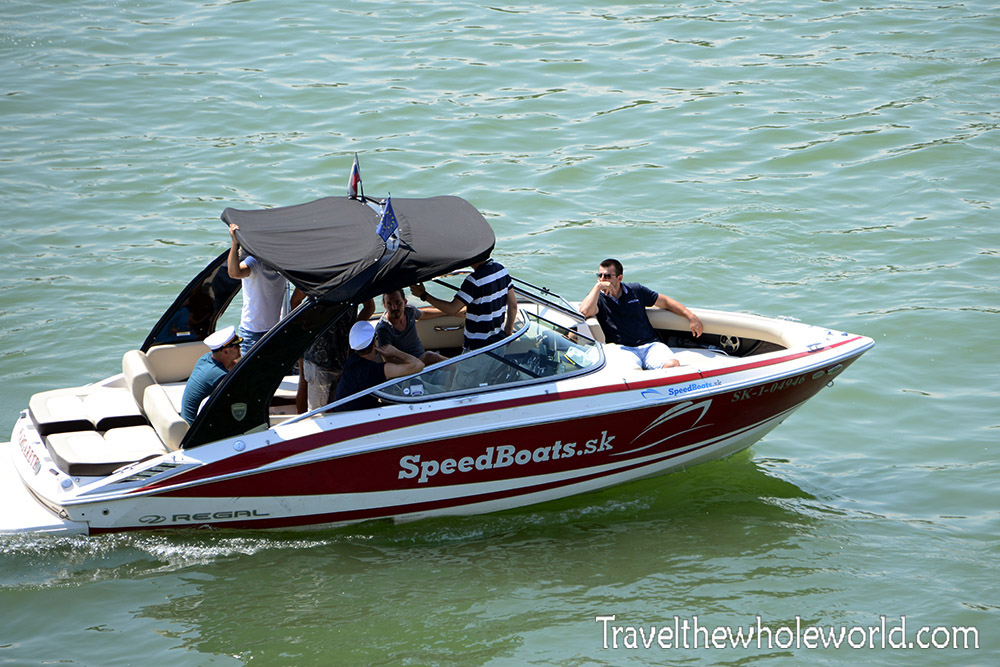 I walked everywhere I went while I was in Bratislava. From the city center, I decided to check out what seemed to be a famous memorial and ended up along the Danube river. The Danube river forms most of the border between Hungary and Slovakia, but in Bratislava, Slovakia owns both sides. You’ll find plenty of people enjoying the river in the summer time, I saw kayaks and speedboats, to large commercial ships in the Danube river. 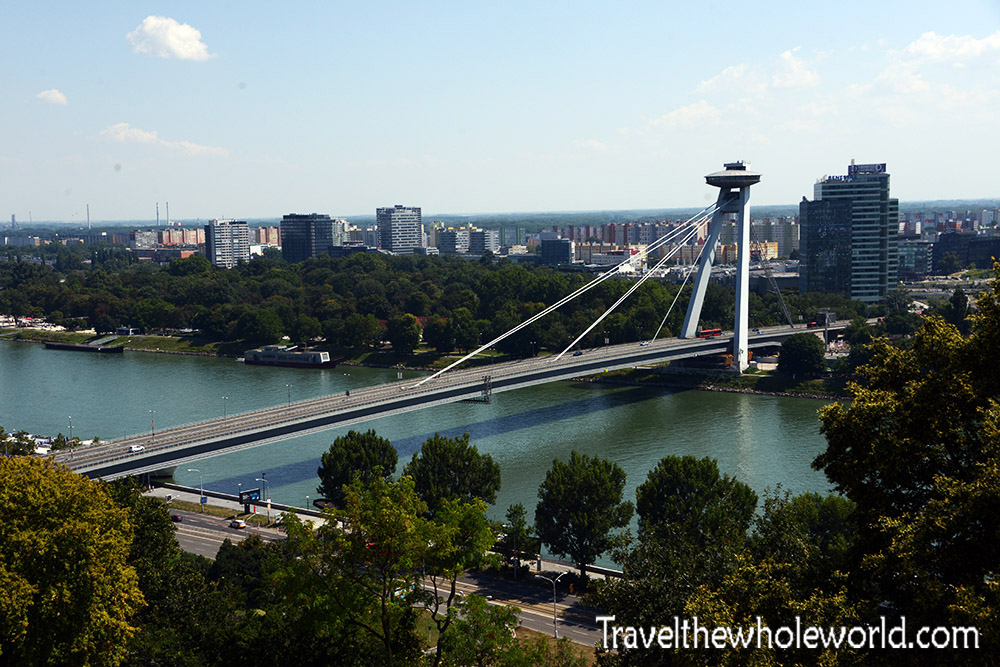 Bratislava has a famous bridge that crosses the Danube. It’s another icon of the city, and has a few nicknames ranging from the National Uprising Bridge to the UFO bridge. The UFO bridge of course gets its name from disc building at the top of the tower. I had no idea at the time, but that is actually a restaurant along with an observation deck. 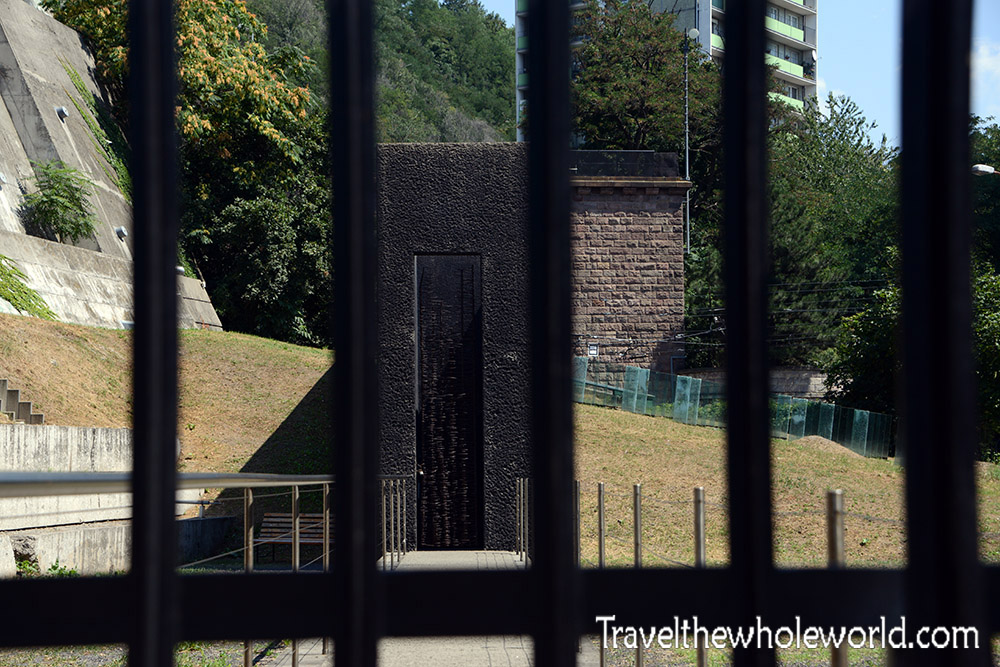 My destination that took me along the river was to the Chatam Sofer Memorial. I knew little about this place, but it had come up in my research and seemed worth visiting. When I finally arrived, I discovered that it was actually closed, but could be open if you called posted on a sign. There was nothing stopping me from climbing the fence and exploring the memorial, but of course I stayed where I was and took this picture from behind the fence. I found out this was the remains of a Jewish cemetery dating back to the 1600’s. In hindsight I regret not going inside the mausoleum seen in the first photo. I imagine it to be complicated and a lengthy process to get someone to meet me out here and let me inside. The crypt I saw inside that building though preserved some graves of important rabbis from hundreds of years ago. Interestingly to me, the style of the graves looked to be similar to some I had seen in Afghanistan. 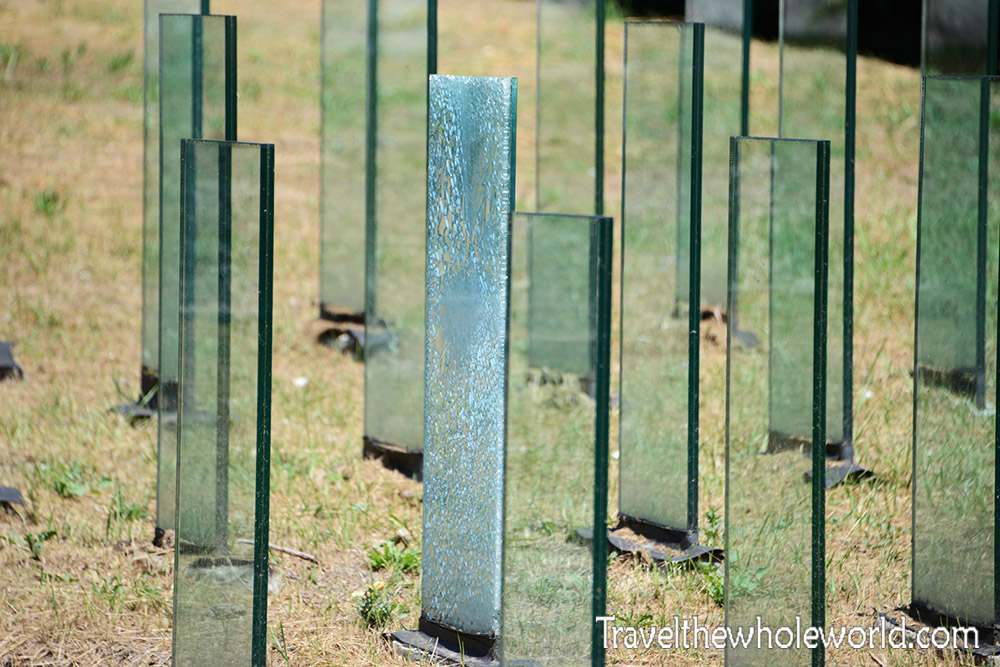 In the 1600’s, Jews had settled in this area, creating a small village along with a cemetery. The cemetery was largely destroyed by a road built in 1943, and is now a tunnel. Had I known that the tunnel and tram had cut through the original cemetery I would have provided a photograph. The memorial was built in 2002, so is relatively recent. Because I didn’t walk on the actual grounds, I had to take this second photo from a distance using my zoom lens. It looks to be modern graves or maybe even memorials of former graves that were destroyed in the 1940’s. 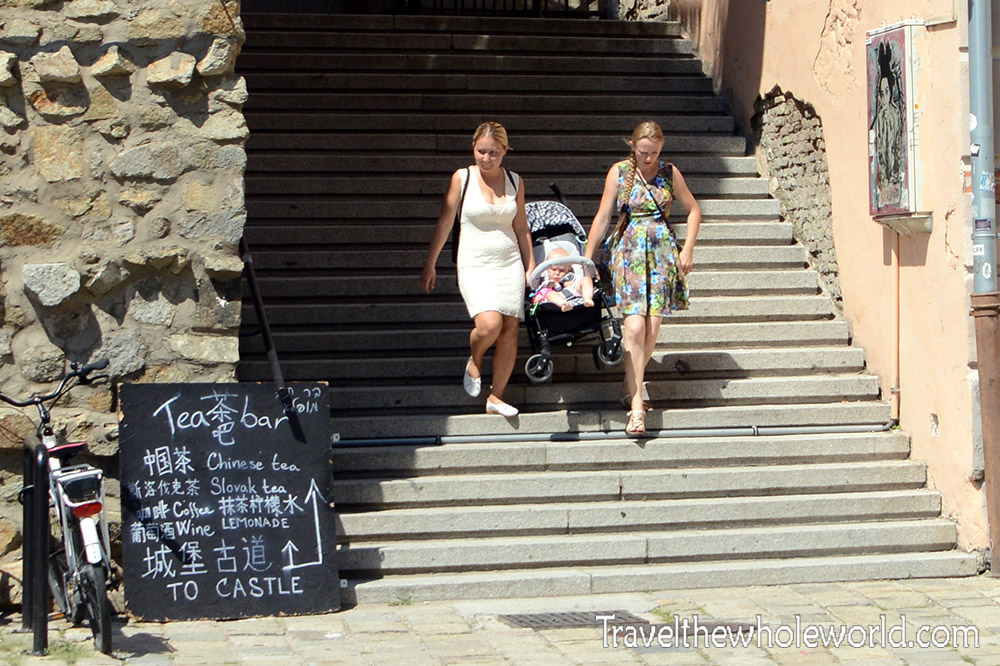 From the memorial I returned to the city center for lunch, and afterwards, I decided to hike out to Bratislava Castle. At many points, I felt like I had gone off trail, but there were many signs to point me along the way. There were even a few hills and stairs to climb along the way. Not a problem for me since I like climbing, but more complicated when you have to carry a baby! A few points gave me a look out over some of the rooftops of people’s homes in the city. 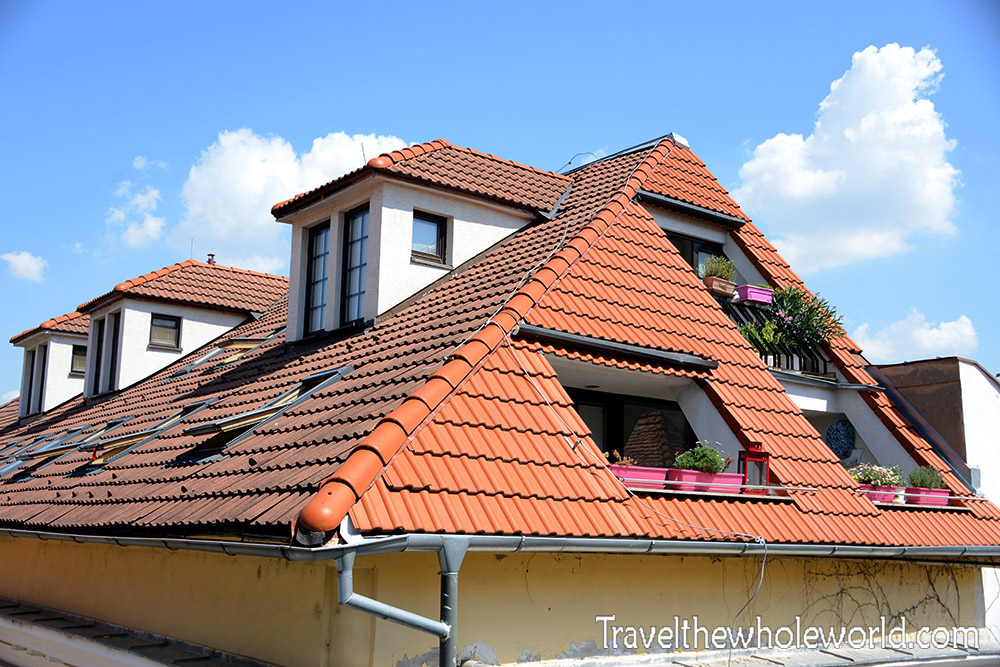 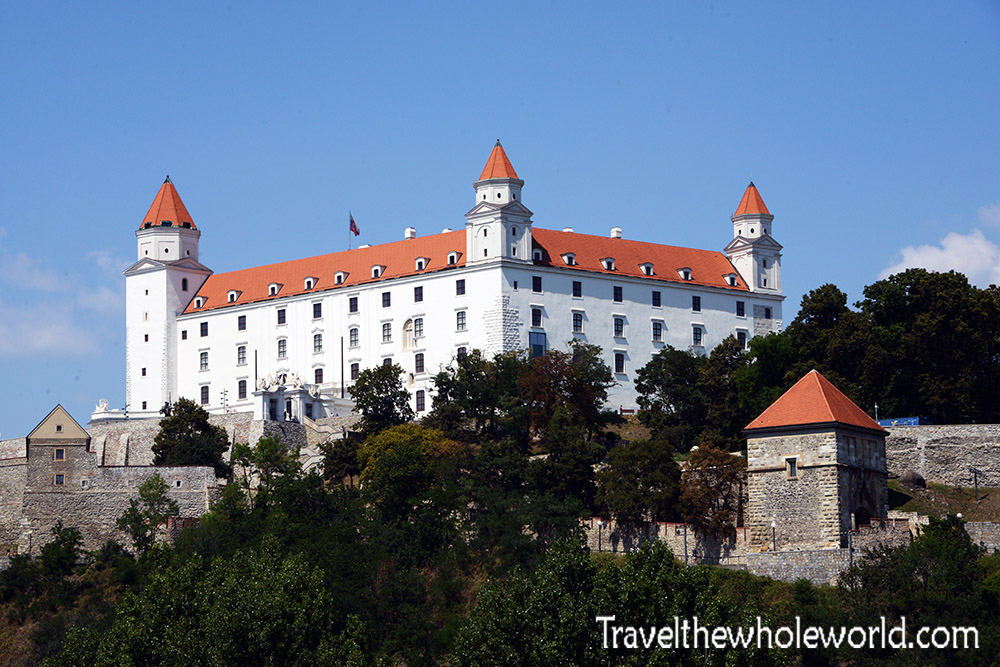 Bratislava Castle is in view in many parts of the city. This photo above was the best I could do to capture the whole castle. I figured there must be a better vantage point, but after I looked at professional shots online it I found they all looked similar to mine, minus of course drone shots. This ancient castle has been rebuilt and renovated a few times throughout its life. Some older photos before its last renovation show the castle where its exterior was much closer to brown, before being restored to white again. 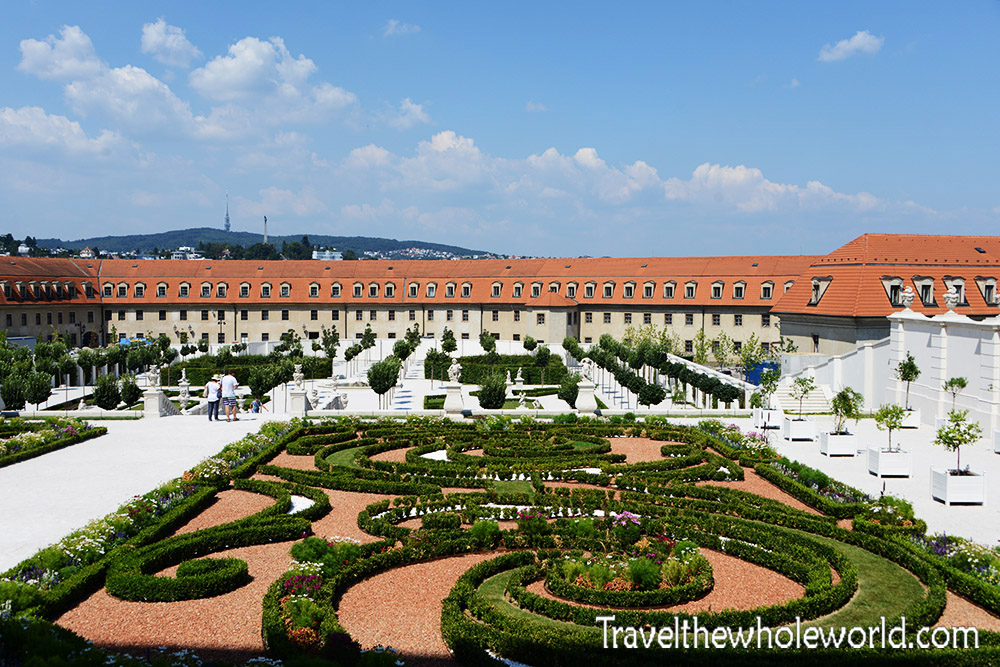 After approaching the castle, you will enter through its ancient walls. Within the castle grounds are multiple parks, gardens, and some smaller buildings scattered about. A few signs describing things weren’t in English so I couldn’t understand their importance or history. My favorite part outside was definitely their garden though. Later on when entering the castle, I found this model which shows the entire layout. 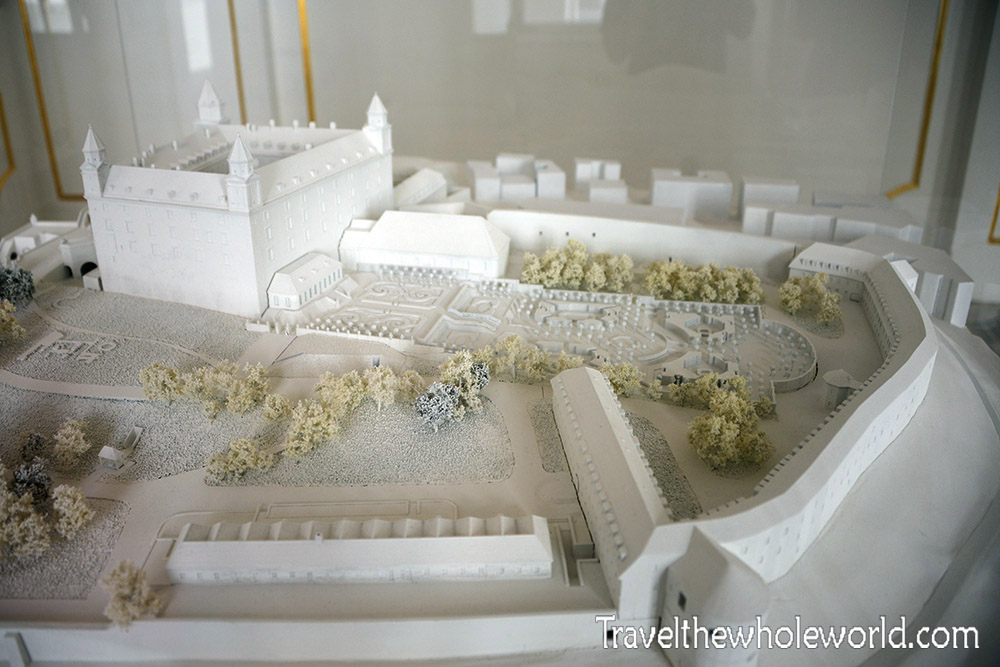 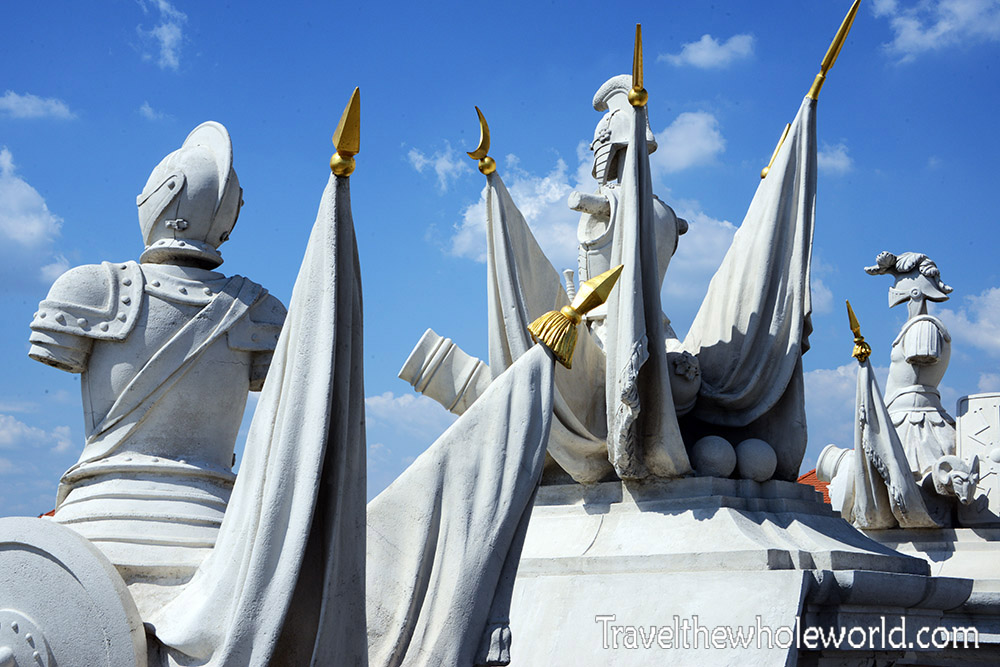 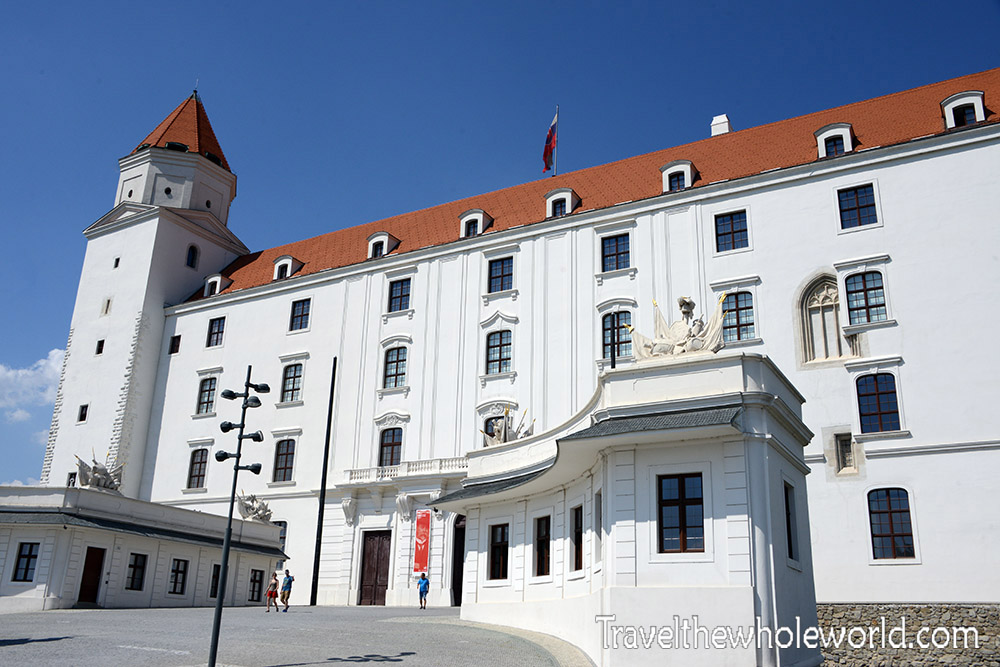 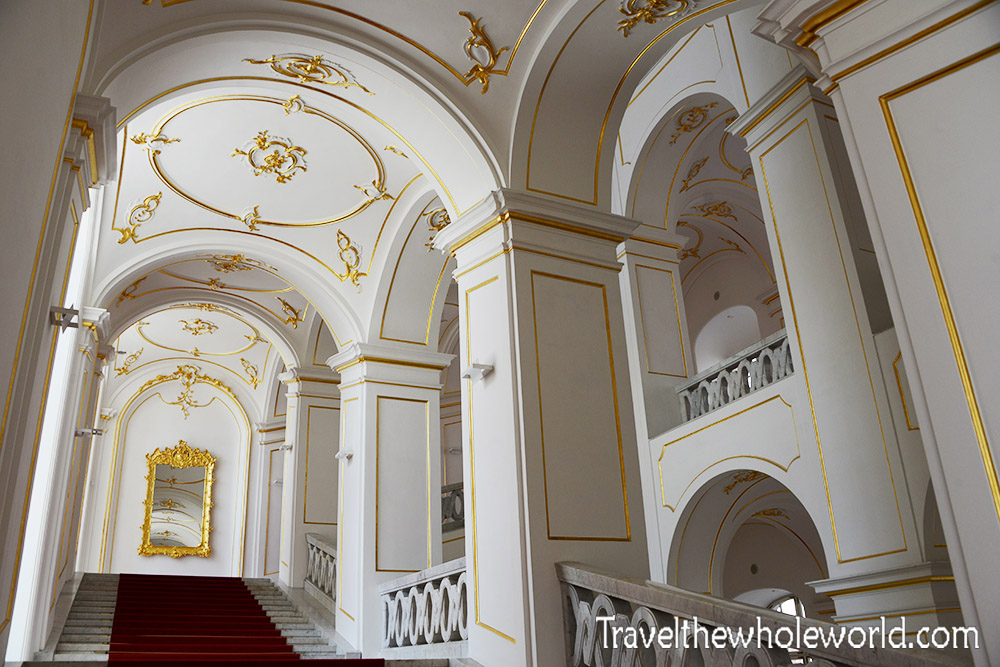 The interior of the castle wasn’t what I expected. The walls were mostly white or cream colored, with marble floors and large open rooms. Bratislava Castle is now an enormous museum, with multiples floors showing paintings artifacts, and other exhibits. I figured I could remember what the passage from this book below was, but after I got home I lost my memory. 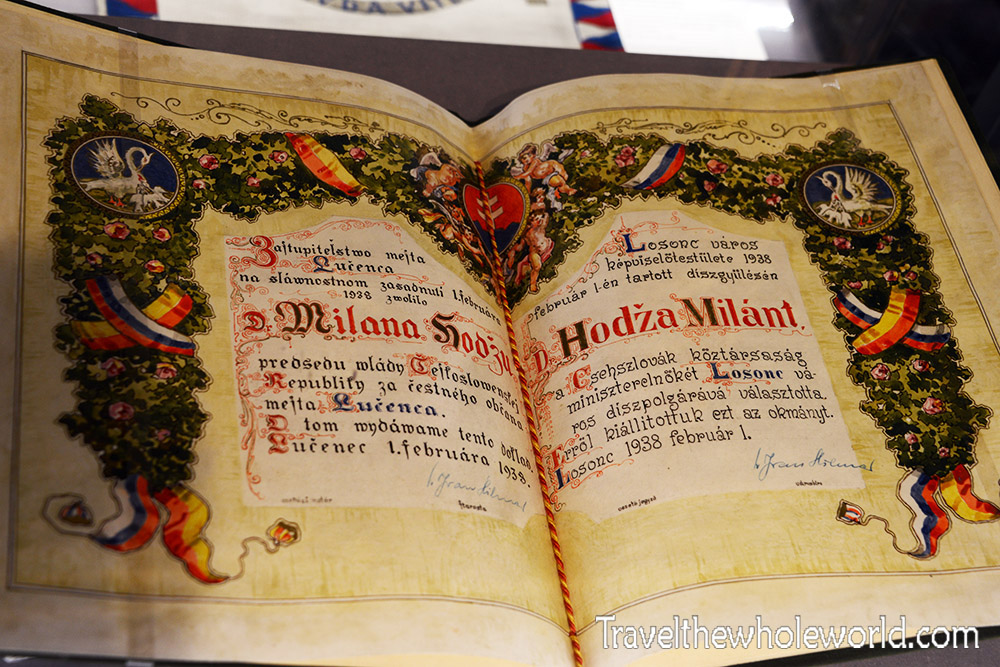 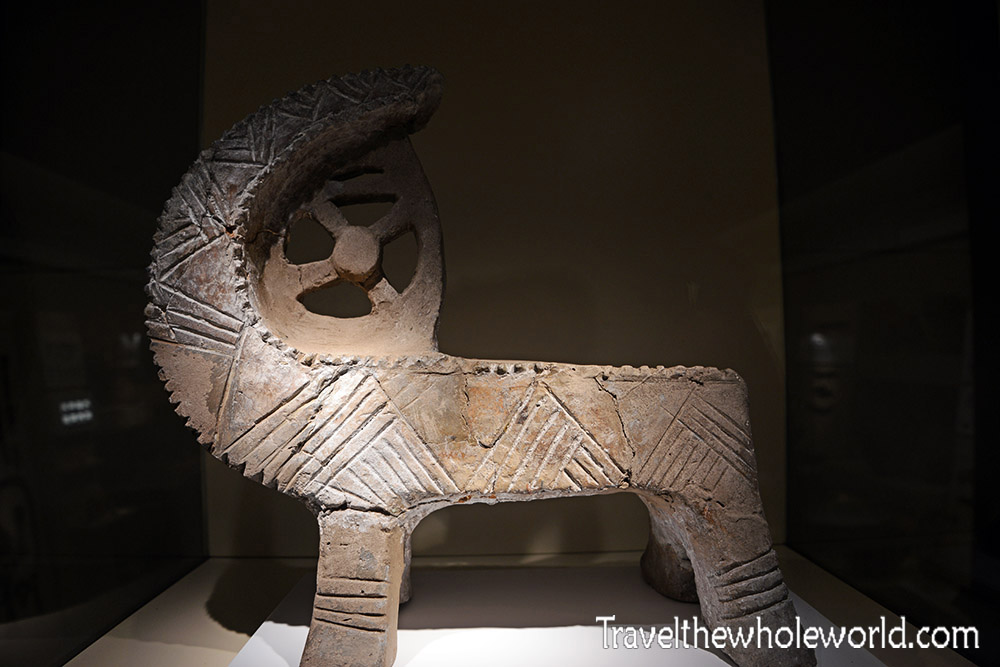 The museum’ present everything from this 7th century artifact to stuffed local wildlife. The most interesting parts for me are always the historic sections from their medieval times or from the communist influence. Other parts had large areas decided to less appealing things such as radio communication from the 1960’s, or pots and pans from the prehistoric ages. 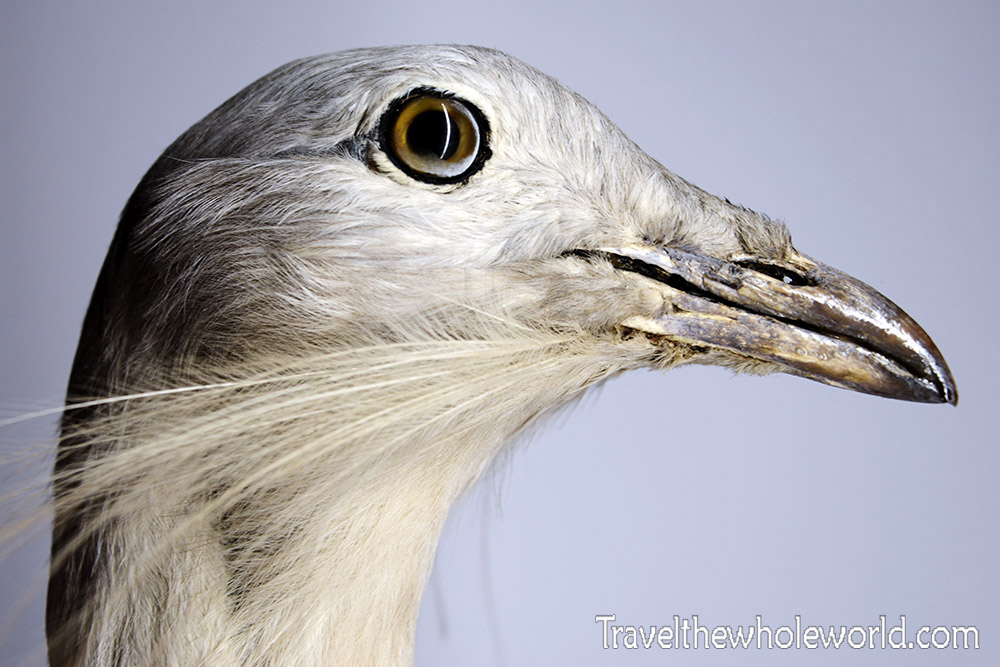 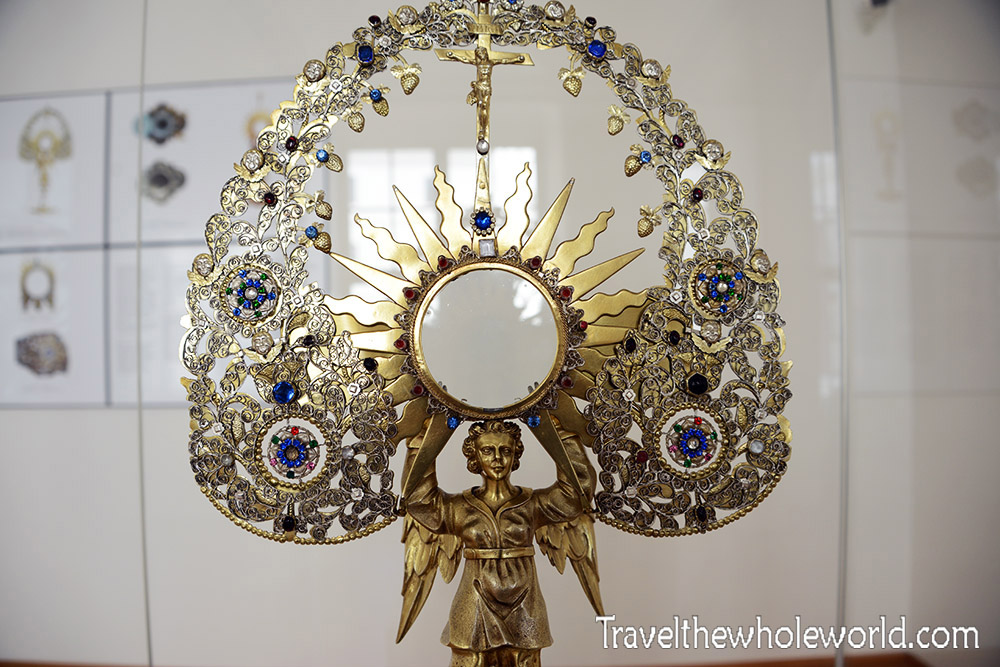 I could have easily added hundreds of photographs of the museum, but my favorite was this monstrance. I didn’t even know what a monstrance was until my visit here. Monstrances are used to display holy items, such as altar bread, relics, or even partial remains of former saints such as bones. According to the museum, this monstrance was created in 1638.I could find less information on this artifact below, but I believe it to be an Artophorion from the 1800’s. Not all signs were entirely in English! 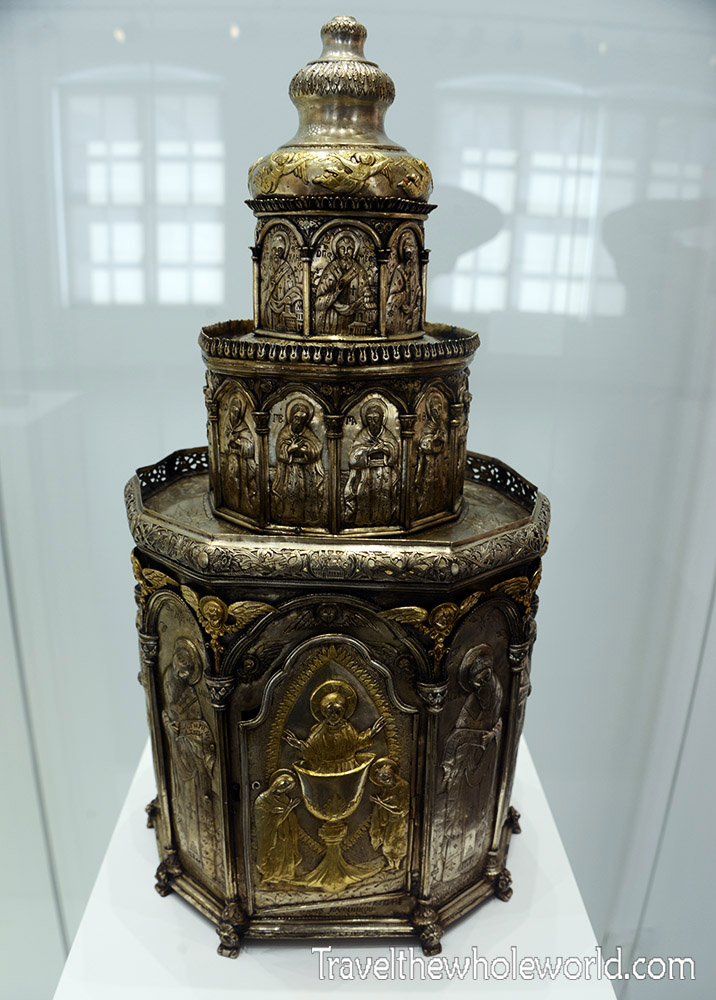