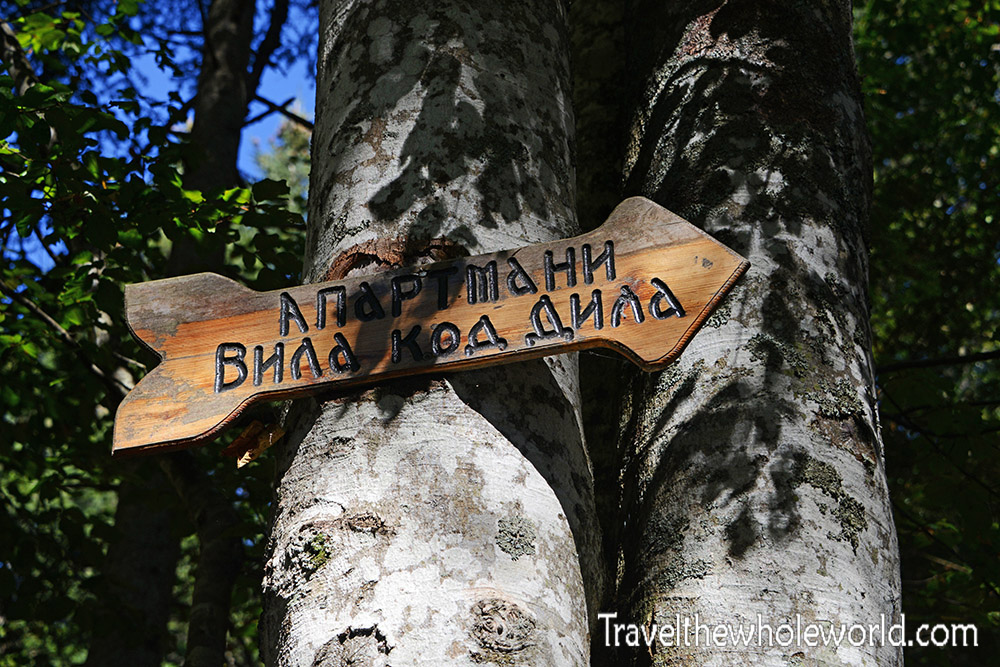 Tara national park didn’t seem to be a very popular place to visit, but I suppose the same could be said about most things far away from Belgrade! When I arrived I was happy to find a small visitor center that sold hiking maps. I already knew the places I wanted to visit, but I purchased a map regardless and headed out to the most famous viewpoint in Tara. Not being able to read Serbian certainly made it a challenge, and I almost followed this sign, to wherever it might lead. 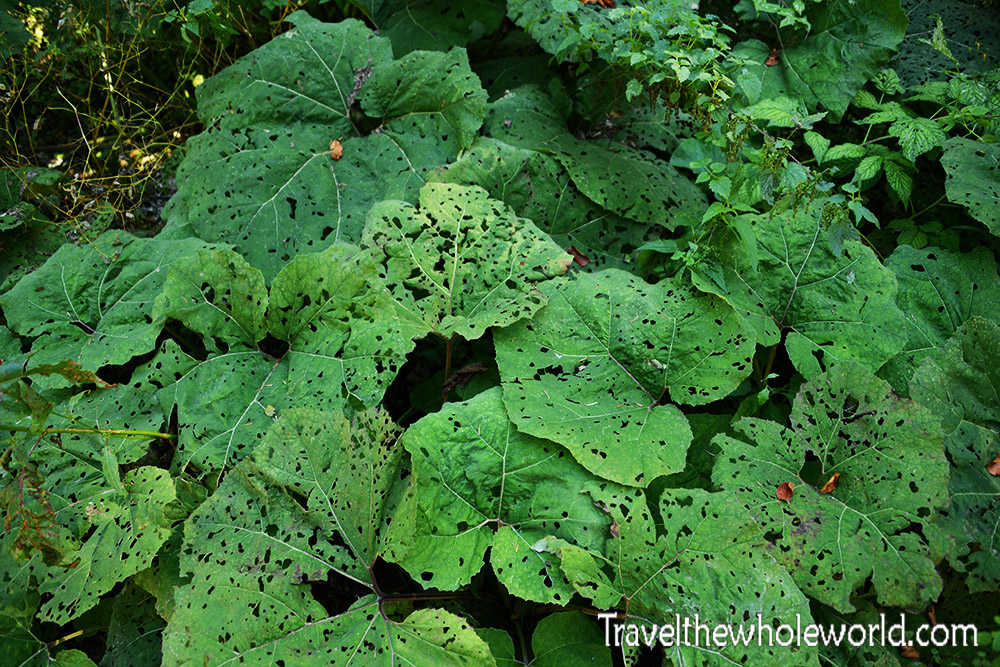 When I finally got to where I needed to go, I started on a short and flat trail. It’s hard to believe you’re in the mountains at all with scenery that looked like any forest in Europe. I took some photos of some interesting plants along the way, like these giant leaves and yellow flowers. 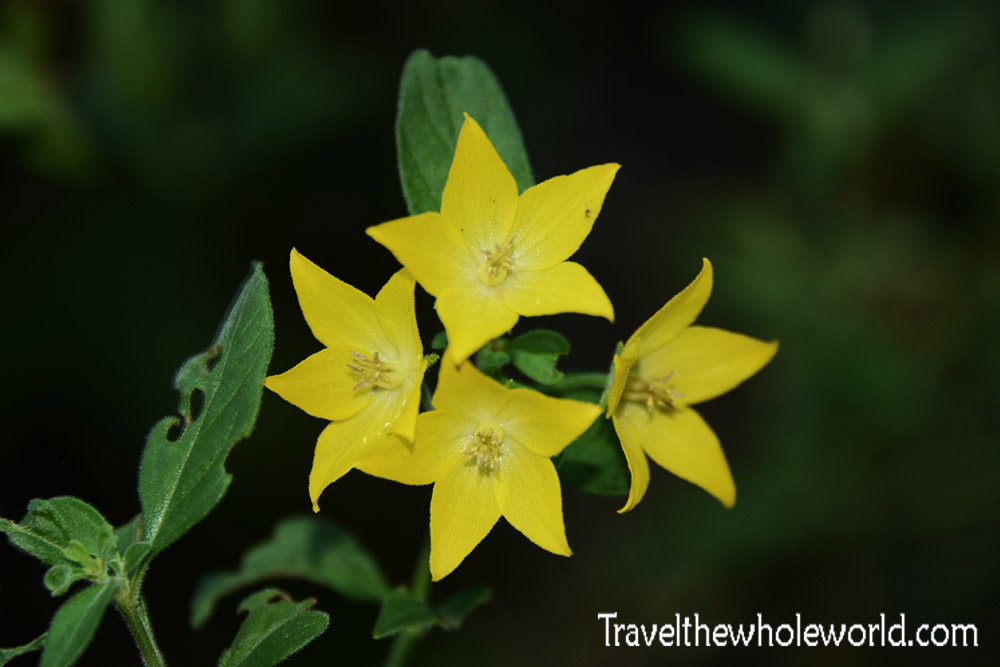 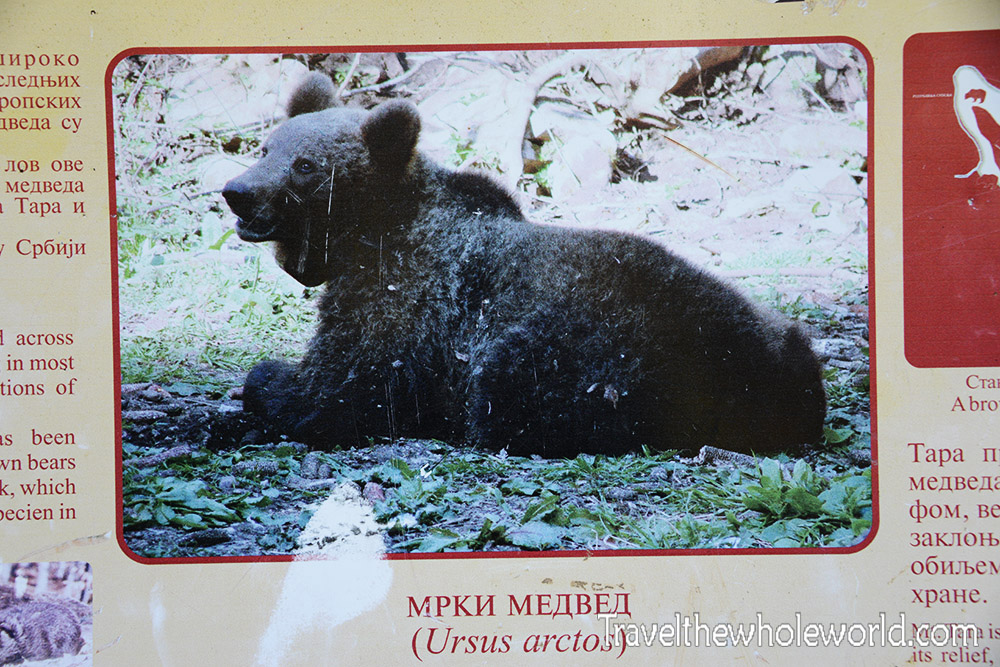 Maybe the most surprising thing to me for my entire visit to Serbia was all the signs warning of bears. To me encountering a dangerous bear while hiking is more an issue in the United States, Canada or Siberia. There were enough warning signs here that I went from having absolutely zero worries to a healthy level of concern. Initially I didn’t care if I had to hike alone or in the dark, but now that was no longer part of the plan. The photo above shows one of the parks signs of the European brown bear, a cousin of the Grizzly. As I hiked along the trail, I was disappointed to see that it abruptly ended and was closed due to the danger of a bear encounter. 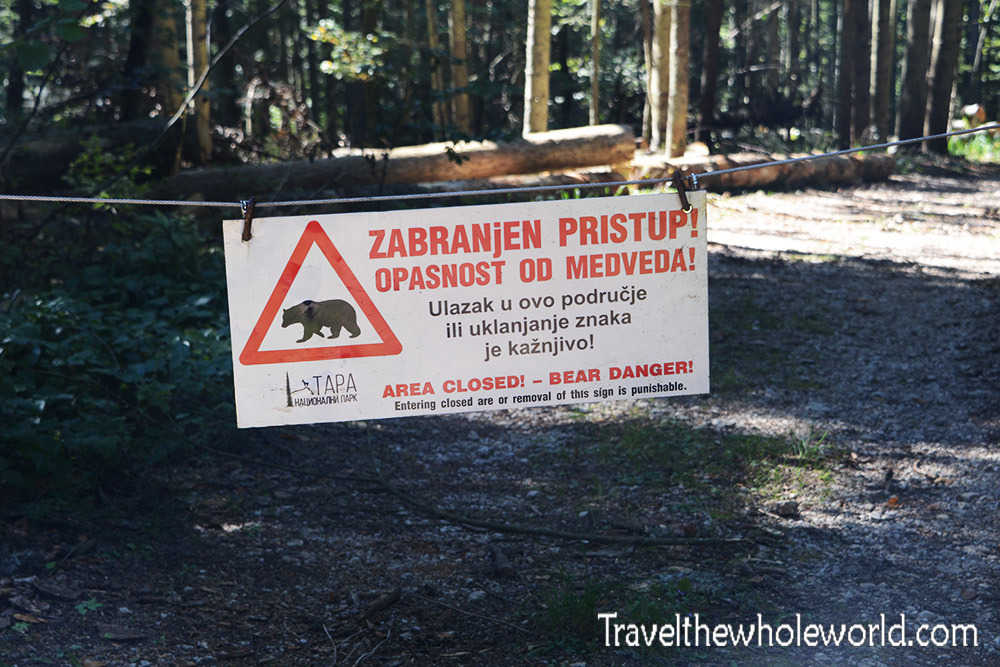 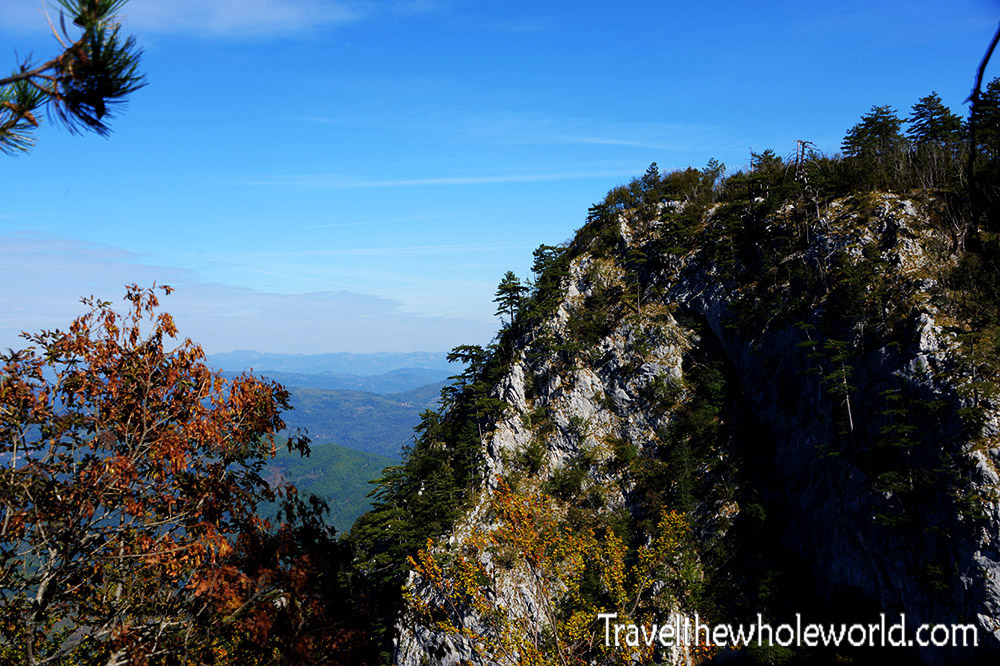 Since the trail I was hiking was closed I decided to go off route in a different direction. People had walked here previously, so I didn’t have to struggle through thick vegetation. After a short distance I came to a small drop off that I was able to scramble down. From here, I took this photo above, and only afterwards did I realize that this where I had been trying to get to. 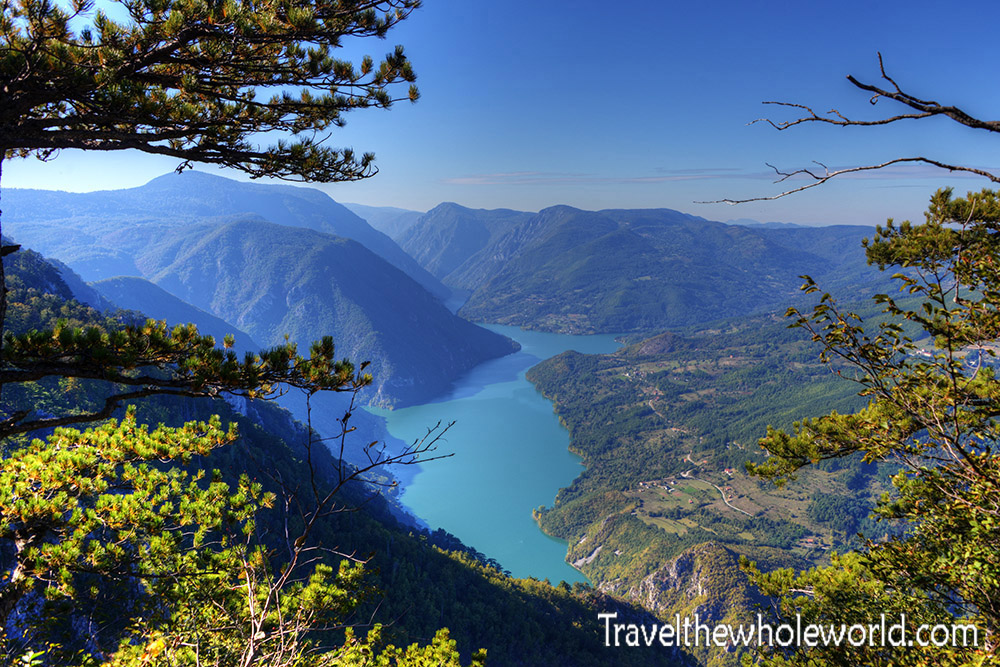 It turned out that the trail that was closed due to bears wasn’t the right direction anyway. This whole hike was very short and it was mostly a lack of effort that I didn’t end up on the ridge. There had been several signs earlier pointing a different direction but I had just maintained my directly instead of turning. When I got back onto the right trail, there were more signs that included warnings of bears and said to hike at your own risk, but for the trail was open. The photograph above shows Banjska Stana, one of the most famous viewpoints in Serbia. The left side of the river belongs to Serbia while the right side belongs to Bosnia & Herzegovina. 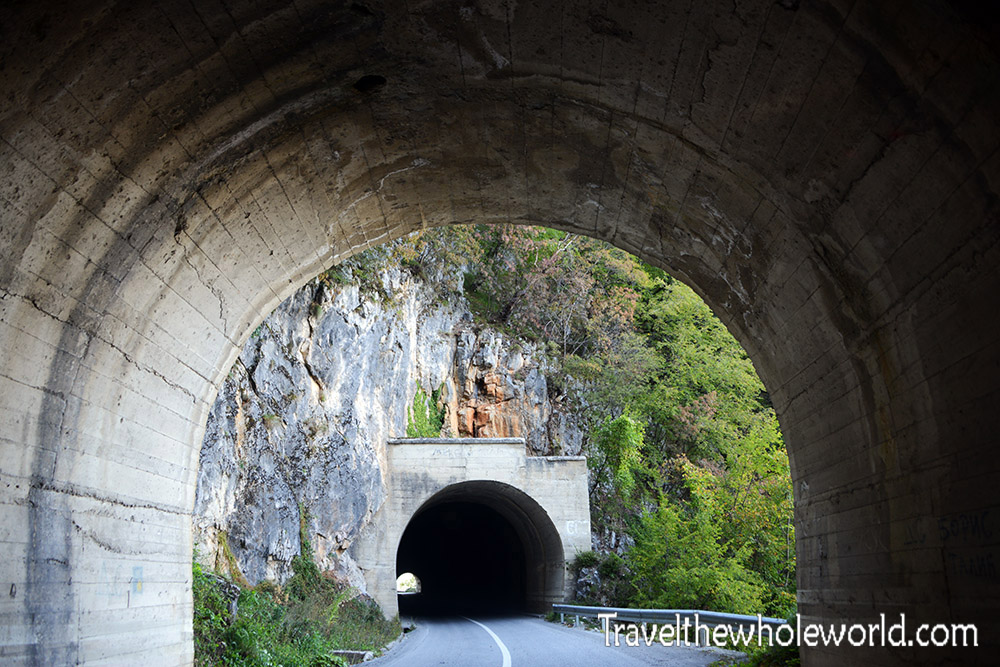 Tara national park is a bit different than most in terms of its borders. Although its boundaries does circle a large swath of land, there are many streets, and towns in between. At some point going from one part of Tara to another feels like you’re on any other highway in the country, but officially you’re still in the national park. These photos above and below were the most interesting road scenery I came across. I went through a serious of tunnels and occasionally was surrounded by steep rock walls as I descended below. 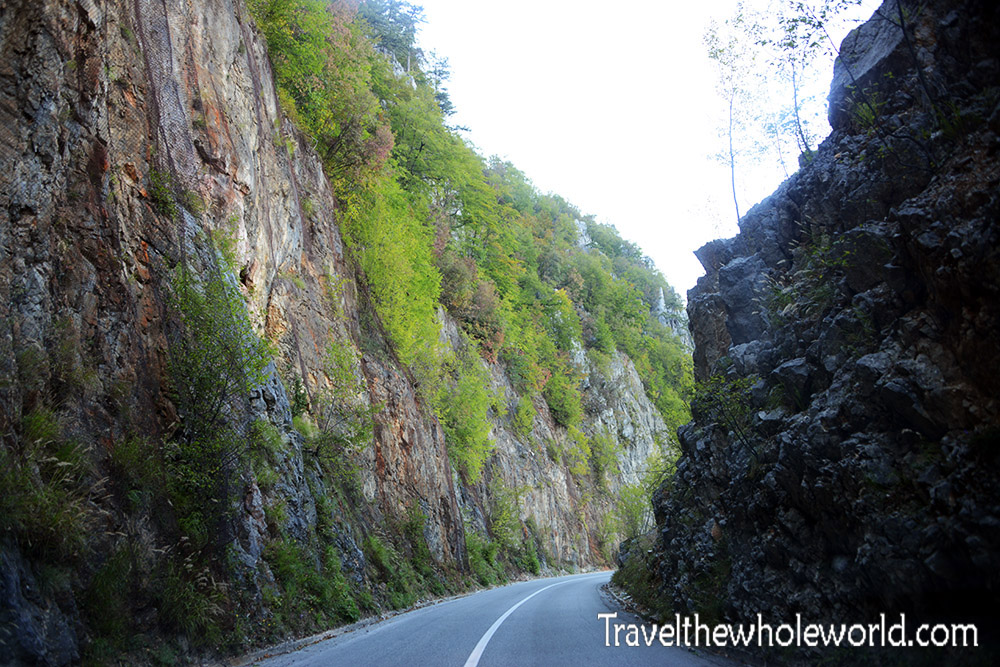 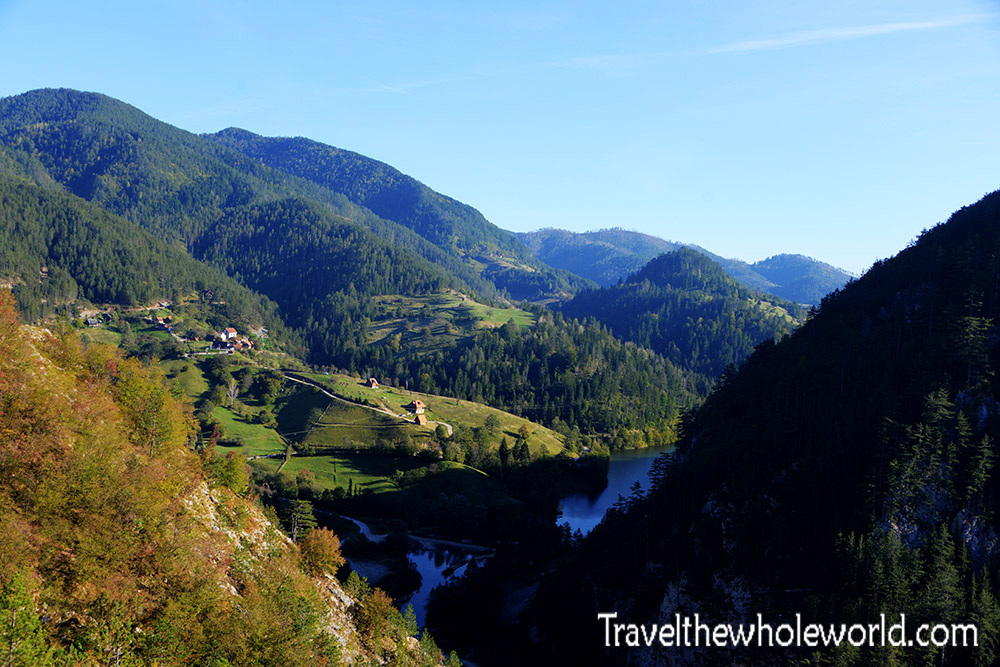 After Banjska Stana I tried to drive to a second famous viewpoint but don’t think I ever ended up finding it. I noticed that the water levels were low not just in Tara but all of Serbia when I visited. The other view point was over a lake so it might not have been the best time of year for it anyway. I did come across this gorge that was dotted with a few time country homes. 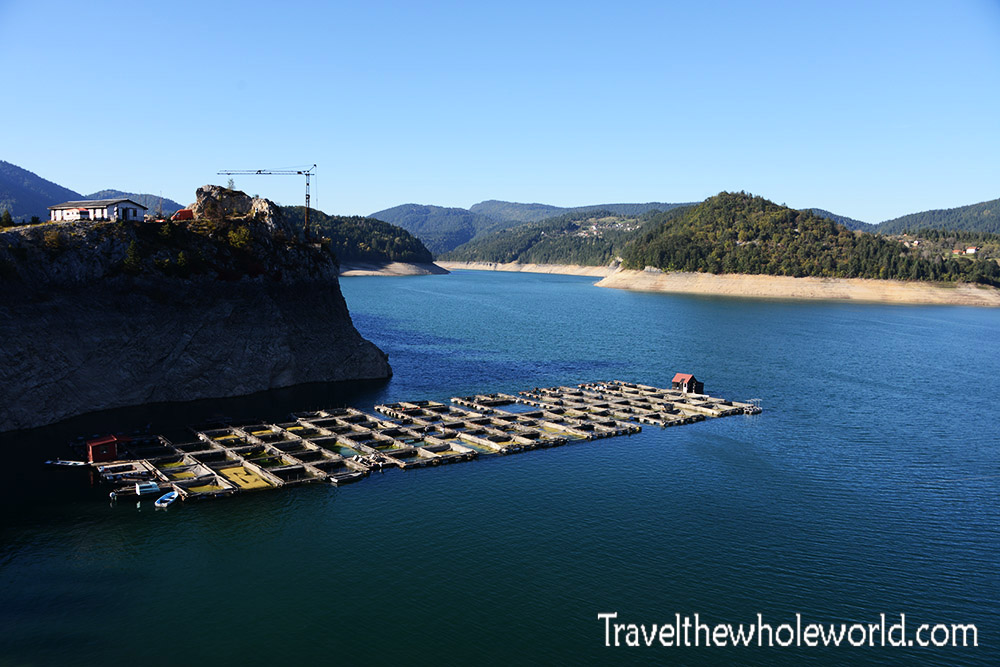 On the other side of the gorge was a not so attractive dam. Even the water levels at the dam were clearly much lower than usual. These floating docks got my attention. I’m not exactly sure what they’re used for, but I’d assume each tarp collects or even releases fish. The guy down below was the lone person on the docks, and didn’t seem to know what he was doing there either. 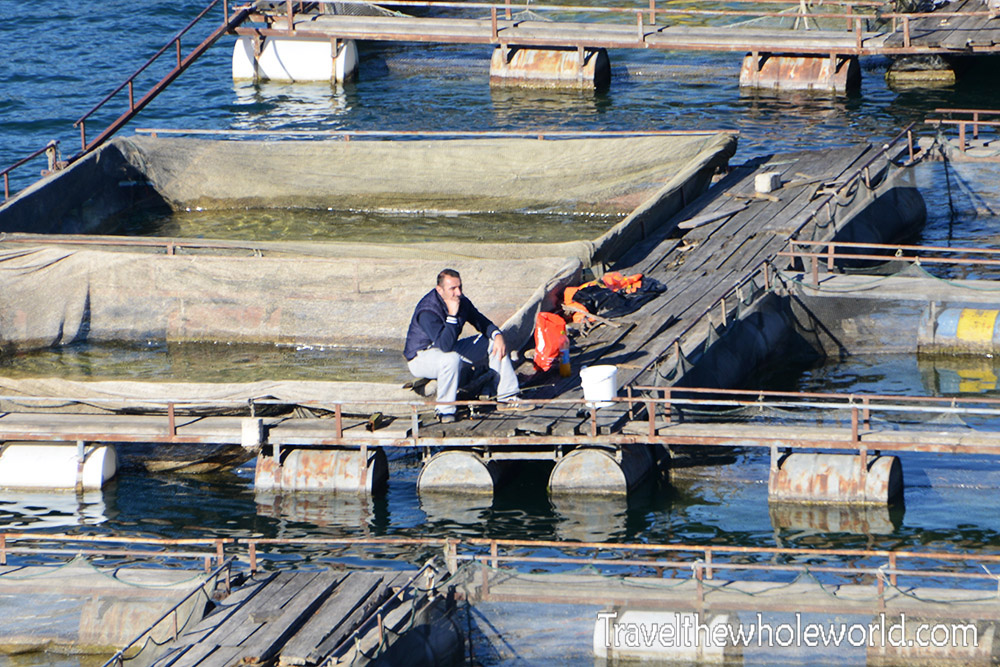 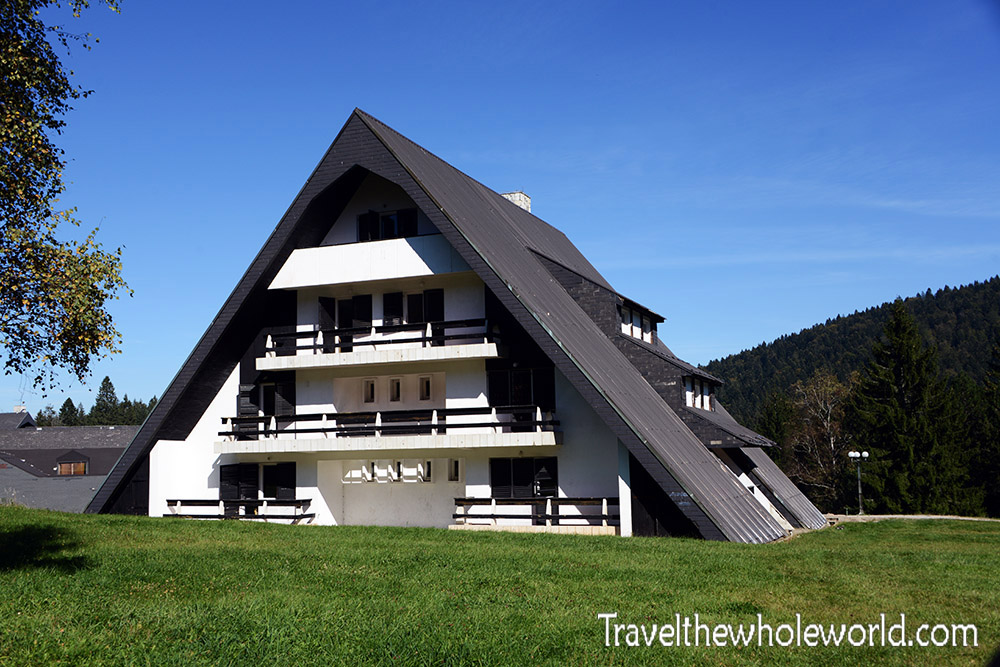 From my failed second destination, I drove to another part of Tara to do some real hiking. Along the way I passed by this building above. It’s way to big to be a house, so I assume it must be lodge with multiple rooms for rent. There were a few other unique roof designed lodges in the area, along with a few traditional looking cabins. During my second drive I came across some more mountain scenery, although there are much more dramatic peaks in Tara. 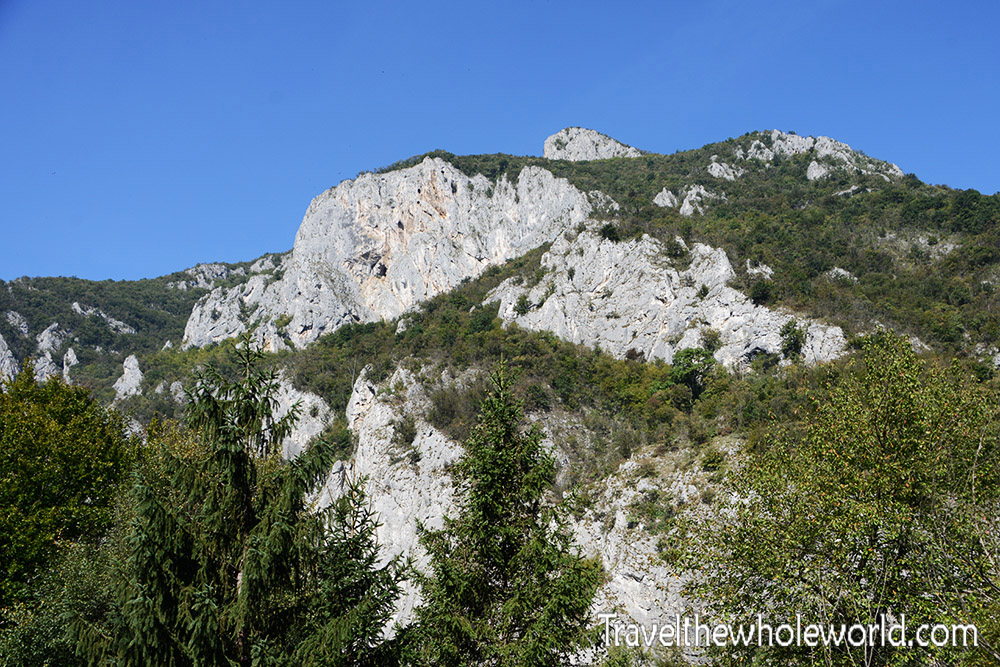 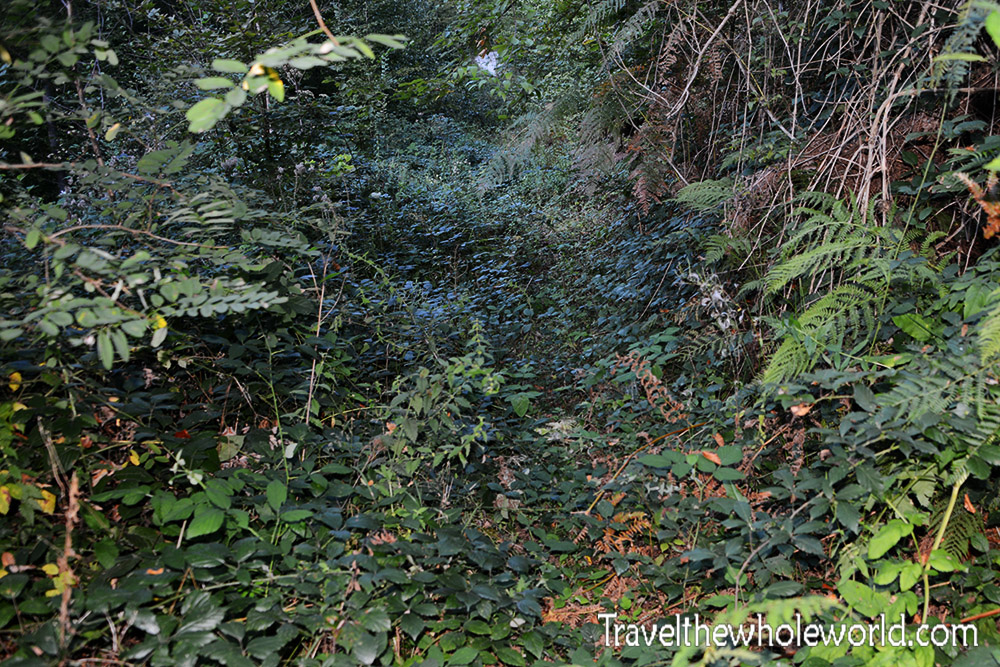 I’m a bit disappointed that I didn’t plan this hike better. I found some hiking trails on the map I purchased that looked legit, but when I got on them I found random turns and made the mistake of trying to go the less traveled path. This quickly disappeared into forest, and I ended up in the middle of the woods. 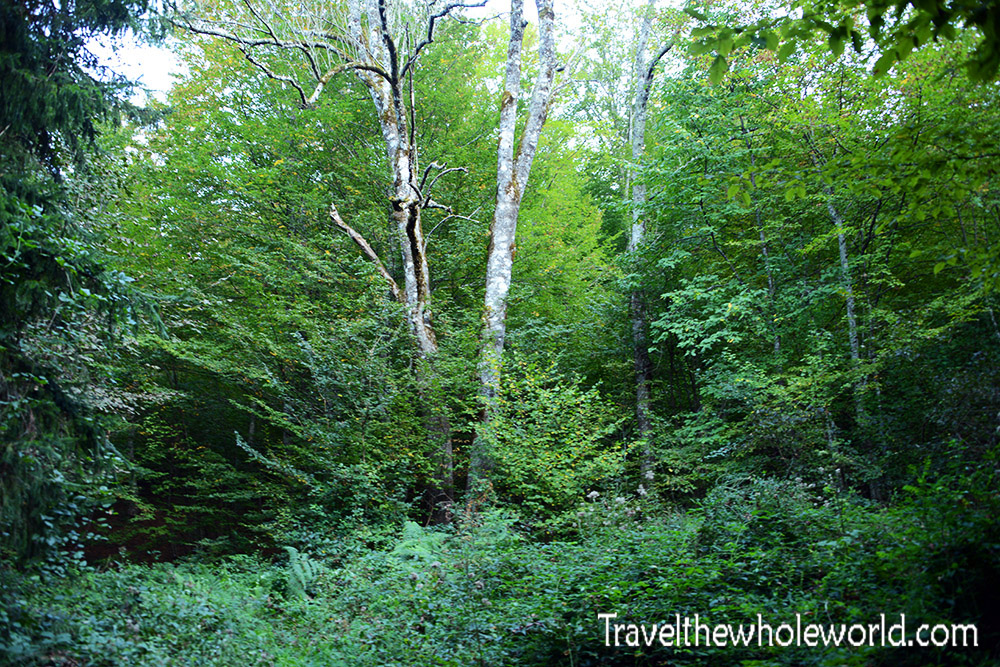 At one point the forest opened up into a small grove and I took this photo above. Somewhere in the near distance was a pack of wild dogs that were parking at my presence. I suppose dogs are better than bears, but despite all their noise they never approached me. The photo below shows a plant that I believe is the species pokeberries, very similar or the same as ones back home in Virginia. 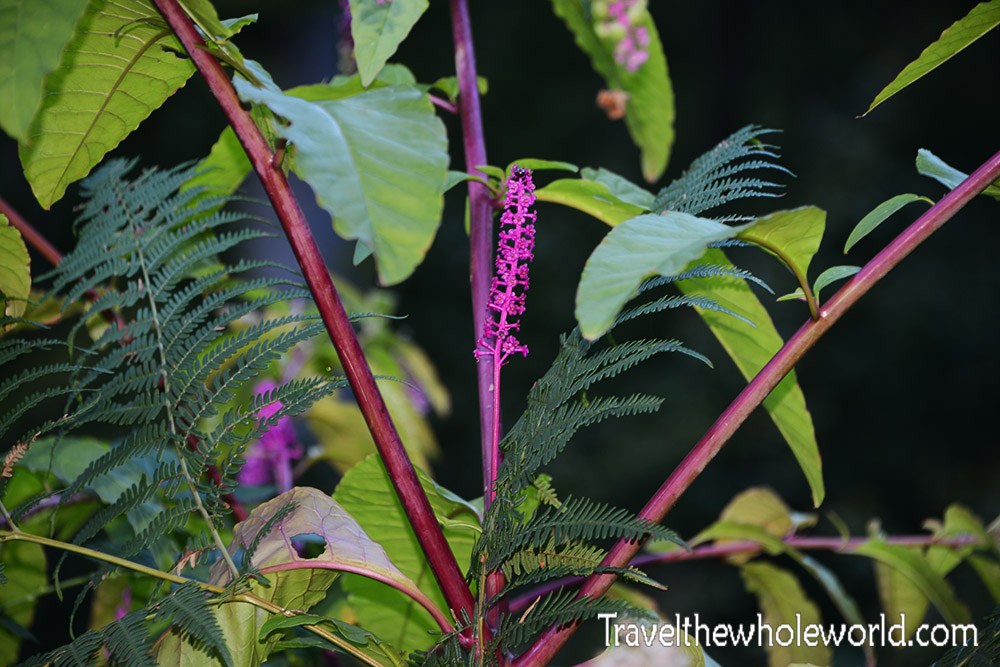 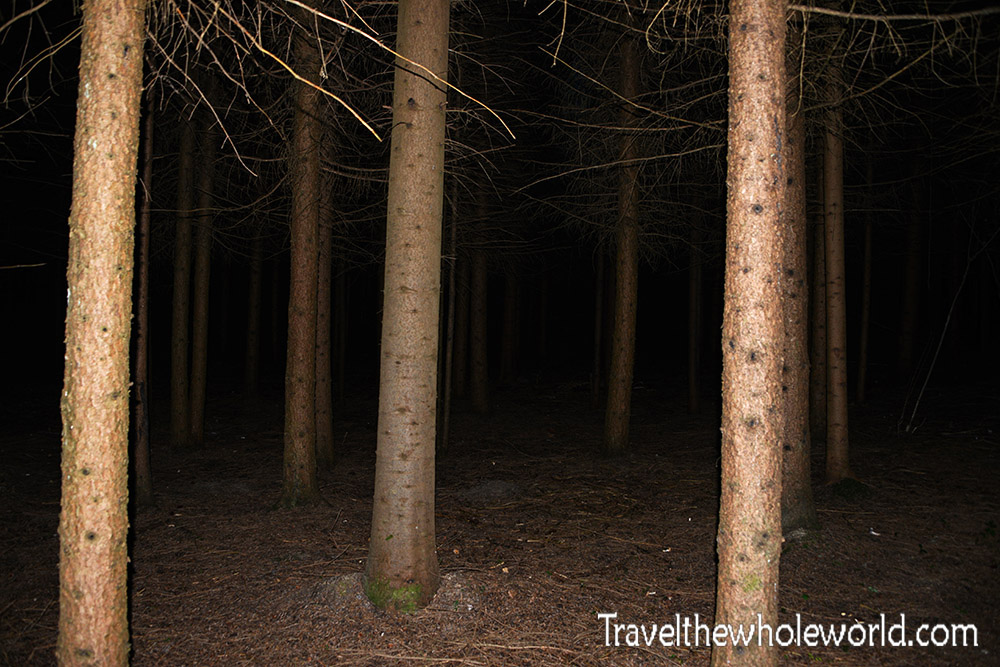 On my descent, I took a slightly different path since it was getting dark. Most of the terrain I hiked in was thick deciduous forests, but towards the exit I went through some dark pines. I’m not sure why these decided to grow here, but I found myself wondering if this is what parts of the Black Forest in Germany look like. 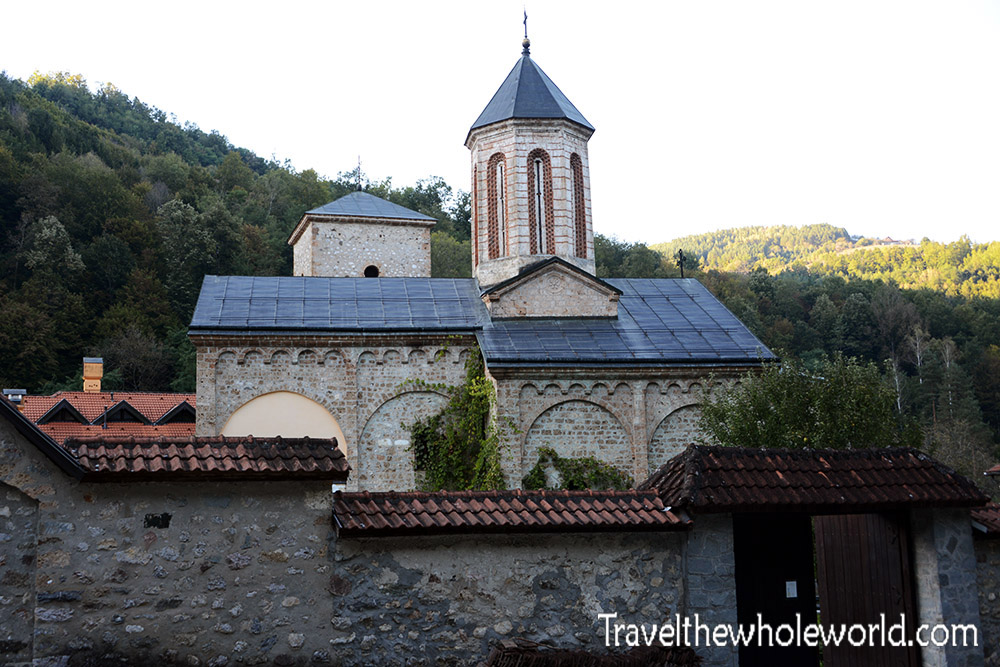 If you’ve read my Belgrade page, you’ll know that the two most famous churches in the city are relatively new. Actually the largest one in the country is still under construction as I write this! The mountains of Tara are home to the ancient Rača monastery, which was built almost 800 years ago. The photo above shows the main monastery as I approached it from its bordering walls. Below is one of the larger buildings that I believe to be the monk’s quarters. 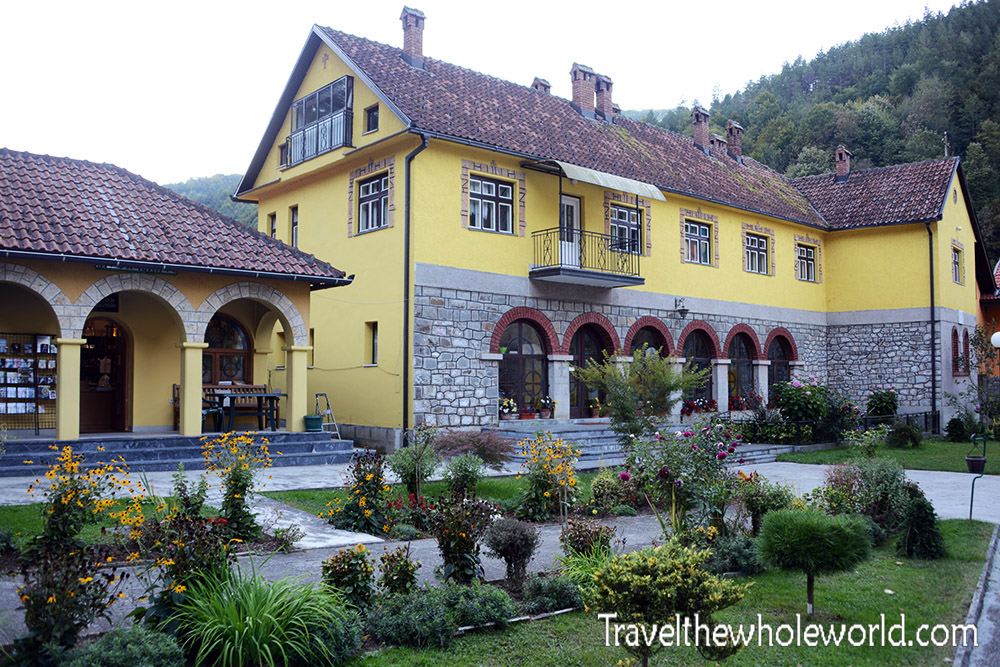 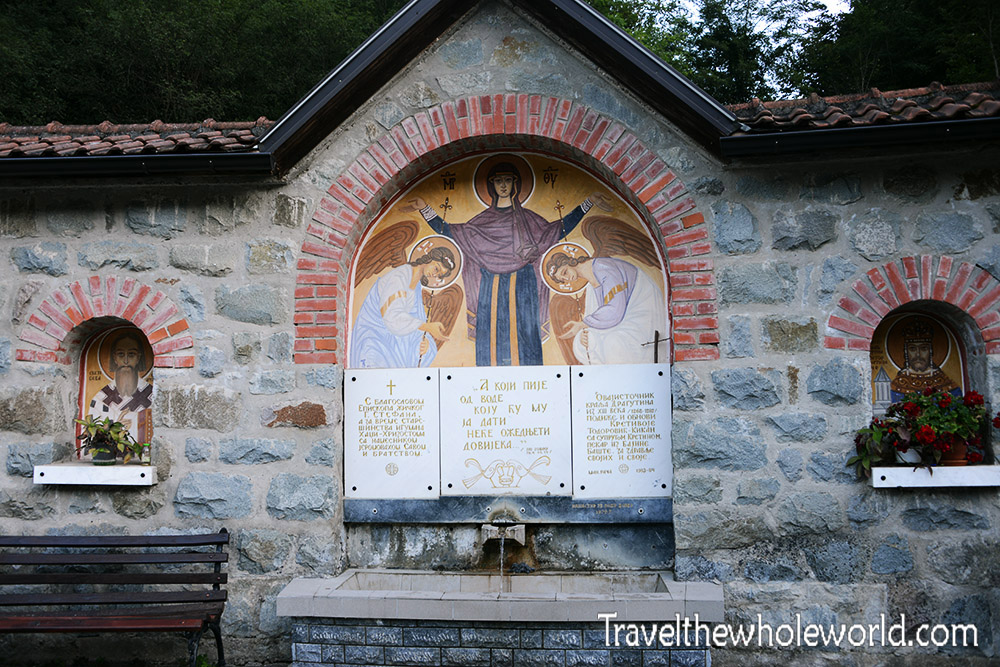 I didn’t have a guide so there is a lot of information I don’t know about the monastery. In hindsight I should have struck up a conversation with one of the priests I saw. I do know that aside from being ancient, this monastery has always been important in Serbia. Serbian nobles in the past were buried here, and historically it has played important cultural roles. During the late medieval times some 300 monks worked here by translating religious and scientific documents from Greek, and provided a school and other services to the country. The monastery is definitely worth a visit, and because of all the history here I do wish I had had someone to answer all my questions. 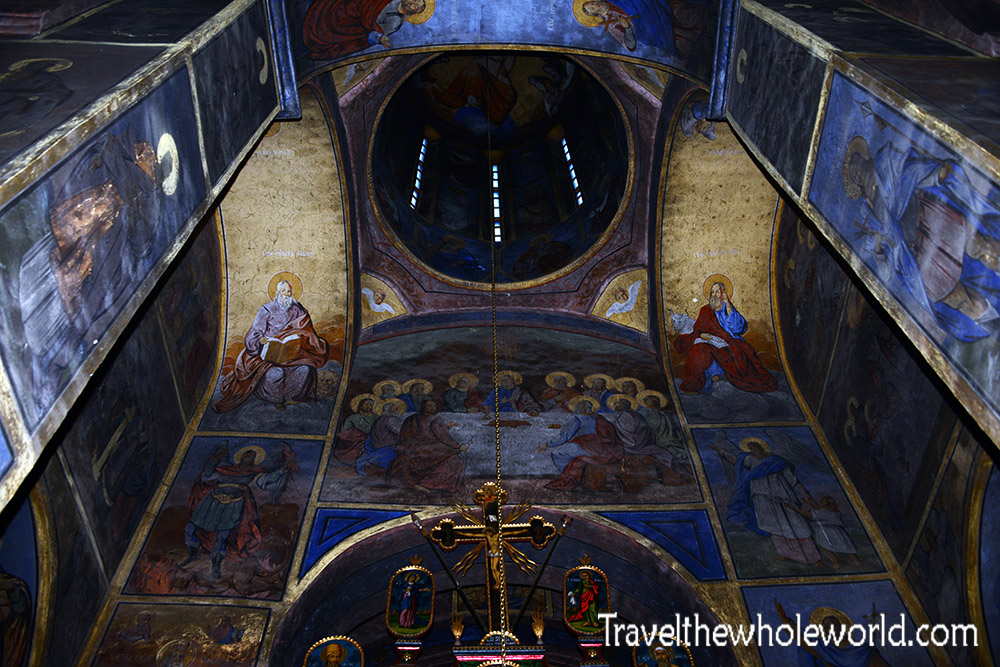 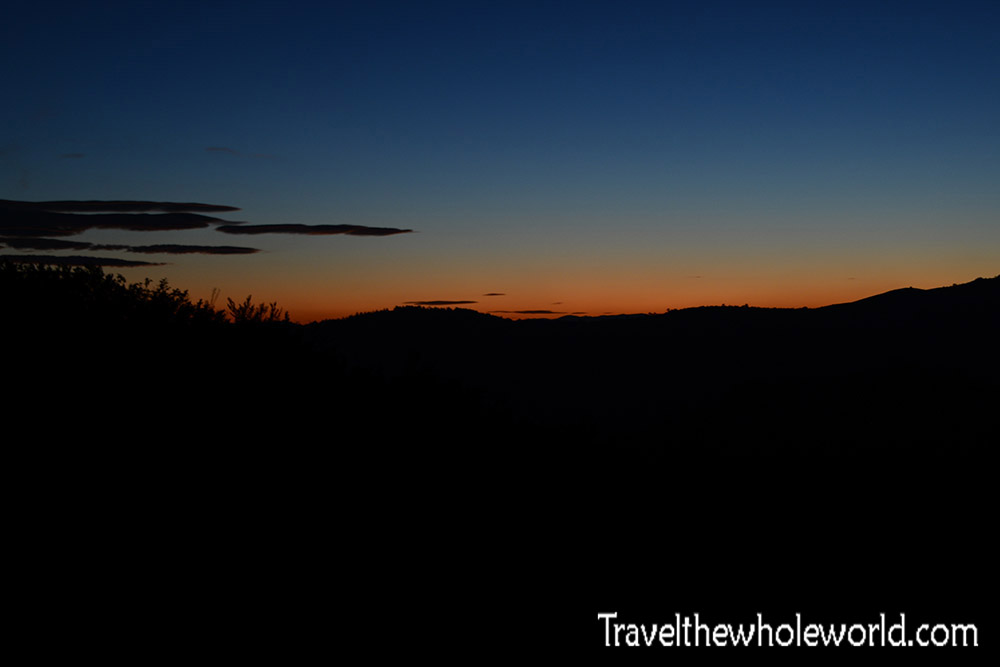 And finally, this should be a truly amazing photo. I’m not sure why but it seemed every night I was in Serbia there was an amazing sunset, this one especially. I could tell hours before it was going to be amazing, and hoped to position myself by some dramatic mountains, but this was the best I could do… Until next time!