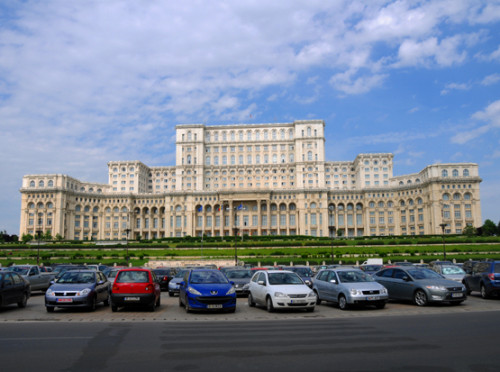 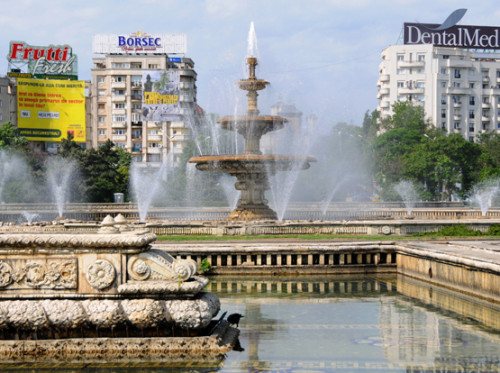 An icon of Romania’s capital Bucharest is their parliament building seen above. This was built during Romania’s communist era, and like most communist governments their buildings were oversized and decorated to show off their wealth as propaganda and a display of power. That’s how such a small country like Romania ended up with the second largest office building in the world behind Virginia’s pentagon. The road leading to the parliament building is lined by several water fountains like the one on the upper right and goes through one of the capital’s busiest intersections. 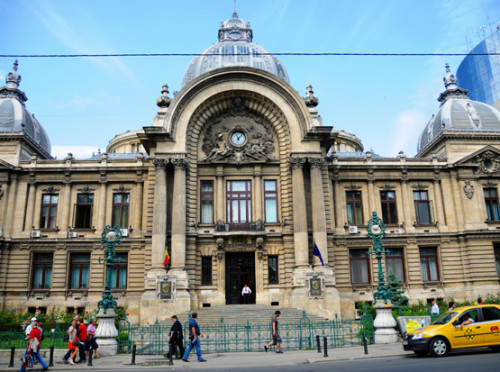 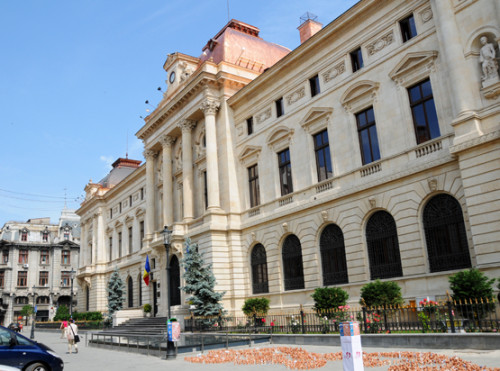 While roaming around Bucharest on foot, I came across what I thought might be important historic buildings only to later find out that the two buildings above are just banks, the one on the upper right is the Romanian National Bank. I generally dislike any kind of guided tour and explore places on my own, but the downfall with that is I end up finding out what most places are after I visit by checking online. These places I was able to figure out on the spot though, below on the left is the Bucharest Theater and the university on the lower right. 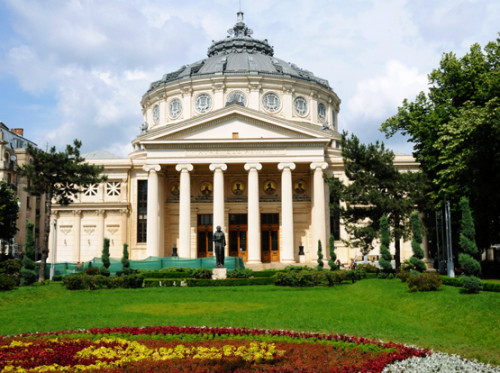 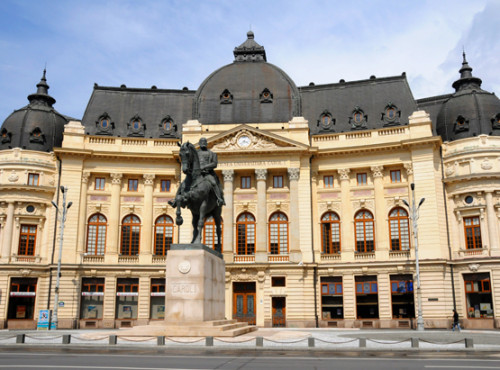 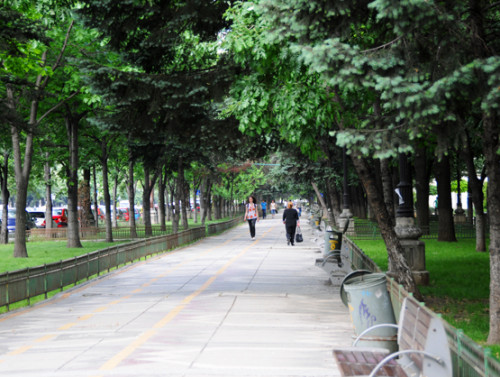 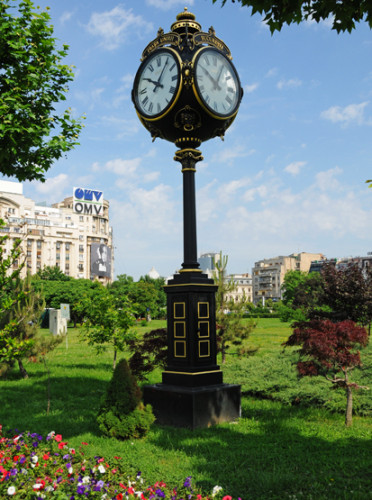 I hate to admit that tales of vampires and werewolves in Romania make me biased towards the weather and assume it’s always gloomy. Of course I knew perfectly well that wasn’t true, but it still felt strange to have such beautiful blue skies and warm weather while in the Bucharest. These gardens are located right outside the presidential palace and had plenty of people out walking to enjoy the day or setting up a picnic here. There’s a few artists and vendors selling food in the park, but none are pushy so you can enjoy a visit here without being harassed.. 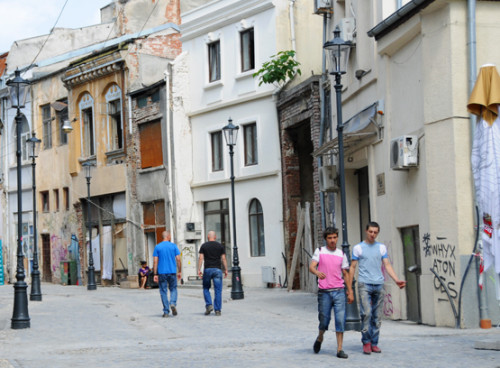 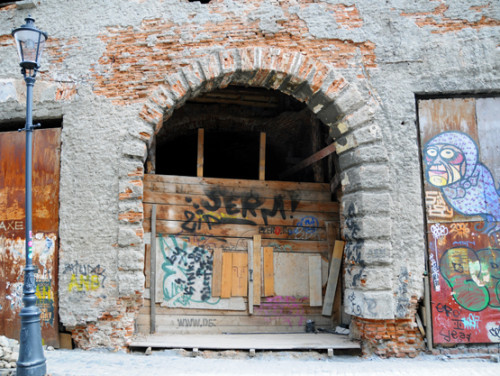 These shots above were my very first views of Old Town Bucharest and were actually the very first place I visited in the country. Needless to say, my first impressions weren’t favorable for Bucharest. I reasoned that if their famous Old Town was the best the city had to offer, then I could only imagine what the rest of Bucharest might look like and questioned if I’d make it out of the city alive. After moving on to the next block of Old Town I saw some construction like on the lower left and then realized that this area was under restoration before making it to the main area. 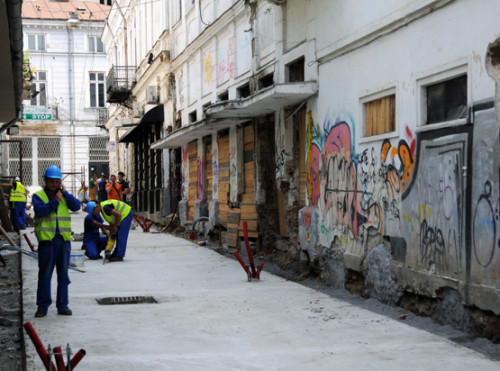 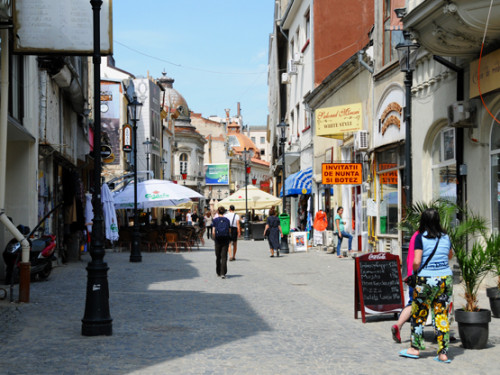 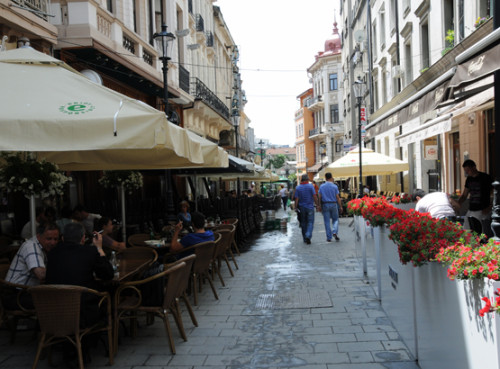 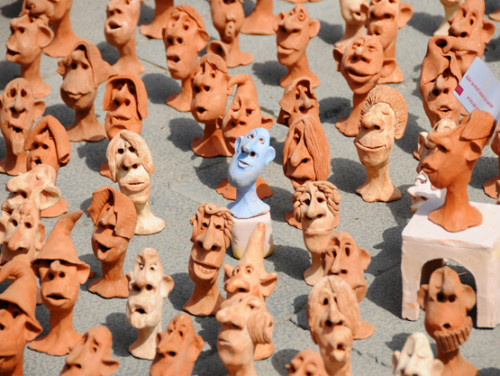 On the upper left is one of the nice areas in old town Bucharest. I came here for lunch almost every day while I was in the capital. Fair prices and lots of restaurants to choose from kept me coming back. Each time I visited Old Town I normally came across something new such as the ogre faces for sale on the upper right. The ancient church was quiet small and packed between some modern buildings so difficult to photograph. Below is the small but beautiful Stavropoleos Church. The church was beautifully painted and decorated and had lots of what I’d guess to be ancient tablets and crosses like the one on the lower right. 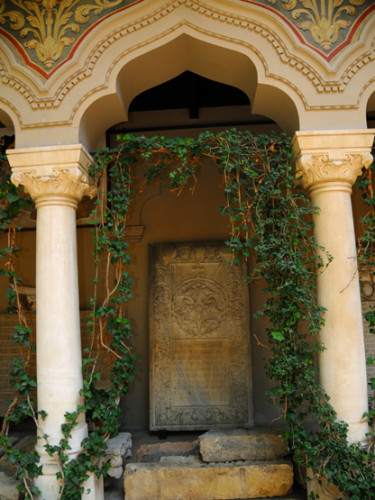 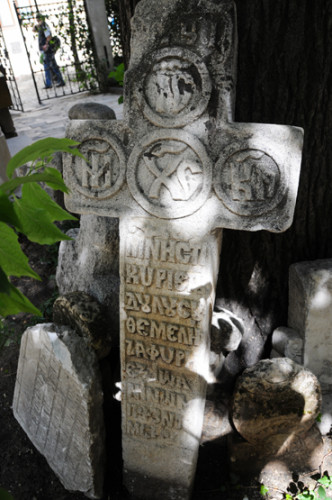 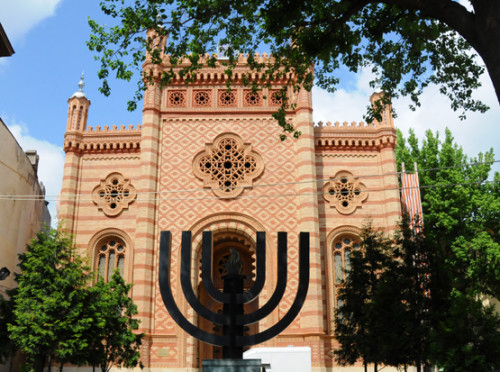 Another important religious building I came across was this Synagogue in Bucharest. Known as the The Choral Temple, it is by far Bucharest’s most important Jewish building and dates back to 1845. On the right is a holocaust memorial with writing both in English which I photographed and more writing in Hebrew. I had never been to a Synagogue before so I wasn’t sure what to expect. I attempted to enter the grounds but the gate was closed and to guys speaking Romania from the other side seemed annoyed by my presence so I moved on. 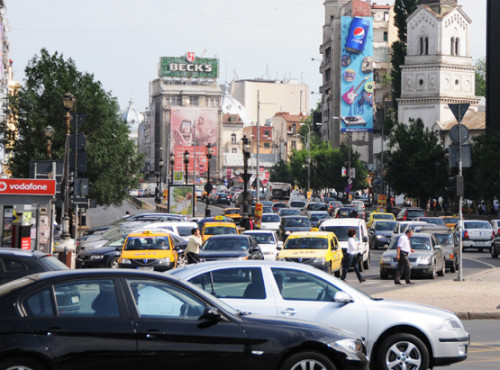 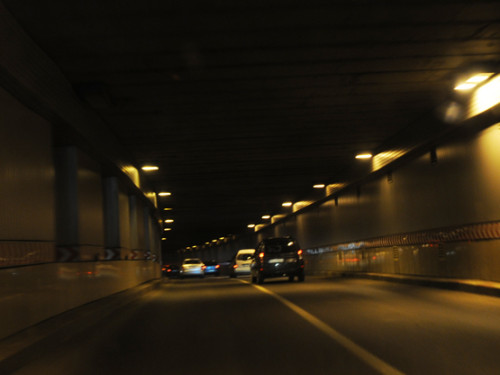 Bucharest has a population of over 2 million people, and of the countries I visited in east Europe they had by far the worst traffic problem. Above was a photo of some gridlock during rush hour, I saw an ambulance sit in the same spot for about 5 minutes since traffic was blocked in all directions. The upper right shows a tunnel that goes over a large intersection during a slower part of the day. Another experience I got was riding the Bucharest metro, this was by far the most packed metro I have ever been on. When the subway doors opened I saw a wall of people, and expected some to get off, but instead about 10 of us who were waiting for the train crammed in. It was so packed I could hardly move and wasn’t able to take my camera out. I later returned to the metro with the sole purpose of taking a photo of the anarchy, but instead there was plenty of room this time around. The car below had about 50% of the people or less than the first time I rode the metro. 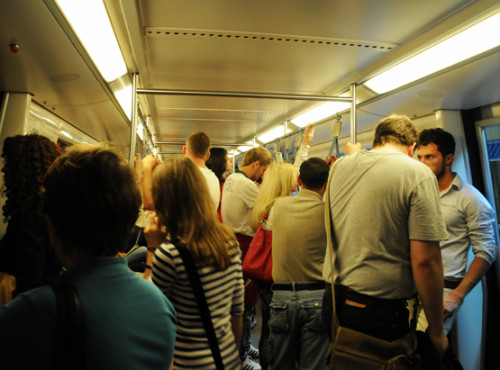 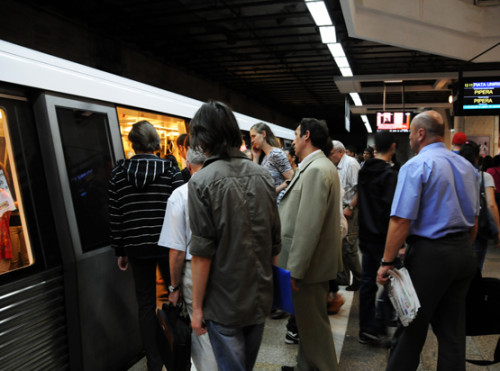 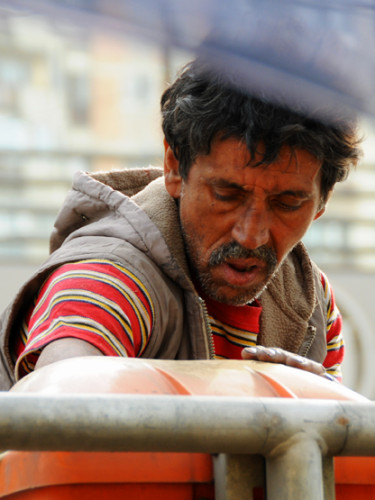 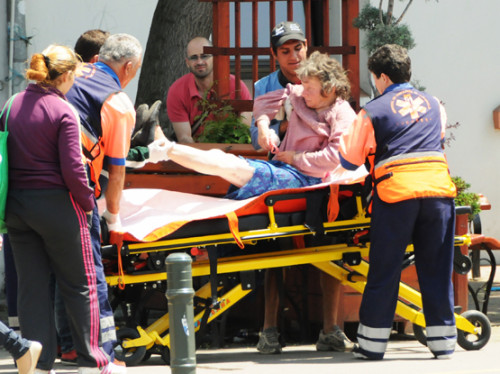 One thing I couldn’t hide about Romania was the large homeless population. Out of all the places I visited in Europe, Romania had by far the largest amount of homeless and crazies roaming the street. One time I was walking and some guy turned around so fast I thought he was going to attack me. I walked past him and was prepared for excruciating pain from behind but it never happened. A taxi I took actually encouraged me to take the photo on the upper left of a guy going through trash. An another day I was walking and saw a lady who was rolling around on the floor with her dress pulled up to her stomach and nothing on beneath. She was screaming wildly and some people walking by called the ambulance, who eventually came and picked her up and took her away. 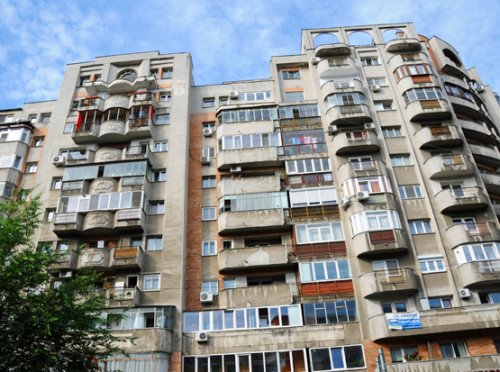 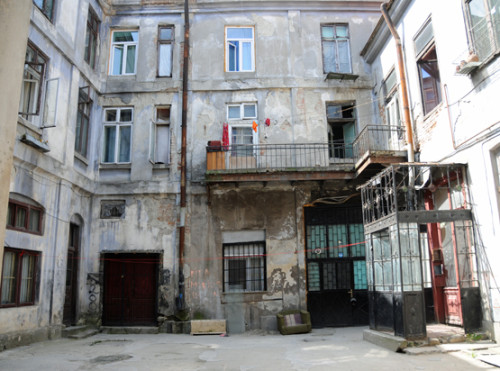 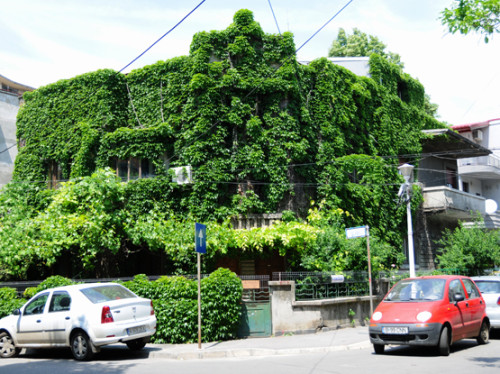 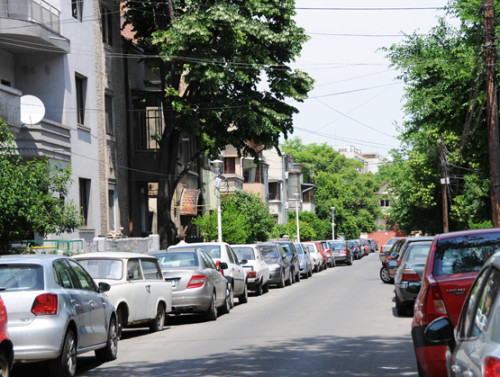 Here’s a small neighborhood where my hostel was while I stayed in Bucharest. I almost called it a small quiet neighborhood, but with everyone owning violent dogs that bark all night that wouldn’t be an honest statement. It might be quieter to stay in a hotel in downtown Bucharest. 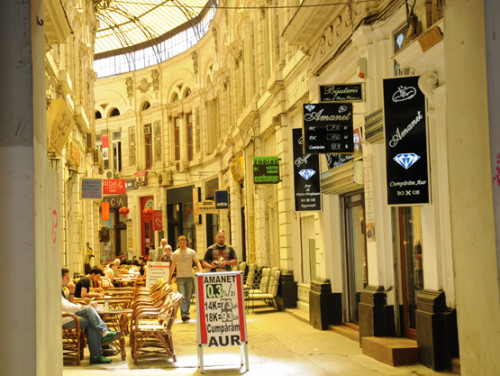 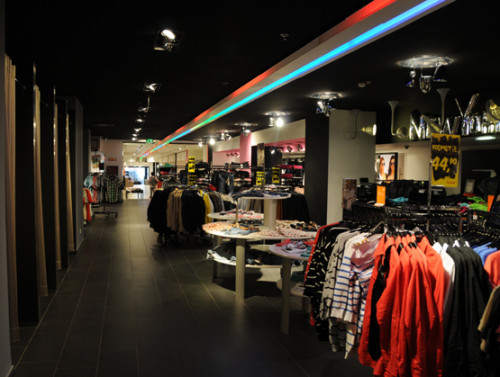 Some of the buildings in Romania aren’t too impressive, but the insides are usually bran new. Above is an indoor shopping mall on the left, and on the right a clothing store near the downtown areas of the capital.