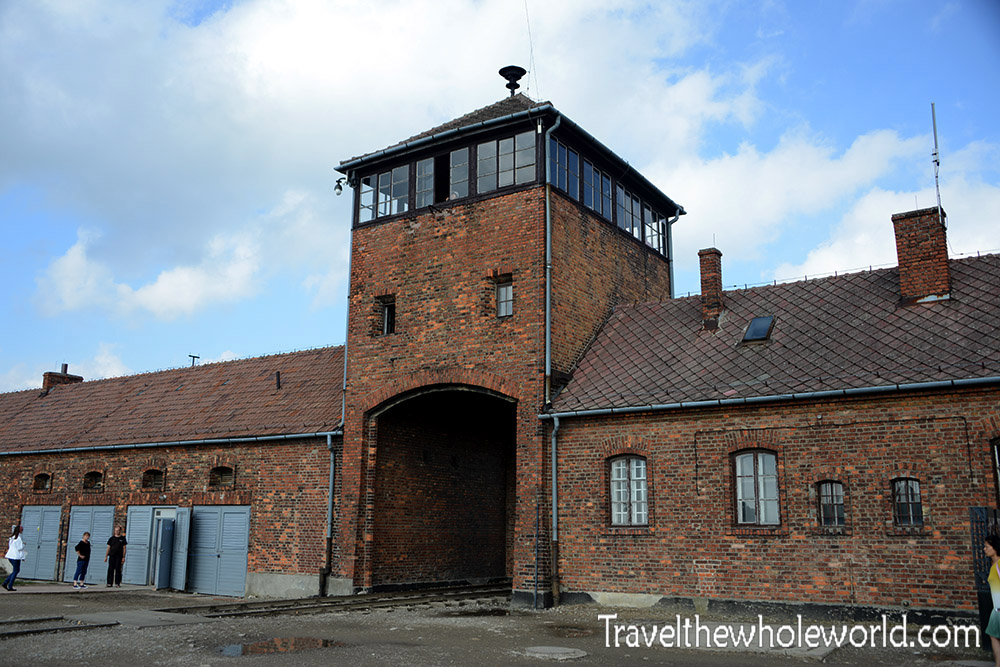 Auschwitz is definitely one of the most difficult places I’ve visited in all my travels. I had previously been to genocide museums in Rwanda or Iran, but Auschwitz was a bit different. I first learned about Auschwitz in detail at the age of 13 when we studied the Holocaust. Ever since it was a place I intended to visit in person. By the time I made it here it had been a long time since I had brushed up on the history of the event. I mistakenly thought that Auschwitz was a single camp, but it was actually a network of three main camps with another 40 plus smaller camps in total. The photo above and below show the famous entrance into Auschwitz Camp II, where victims arrived by train. 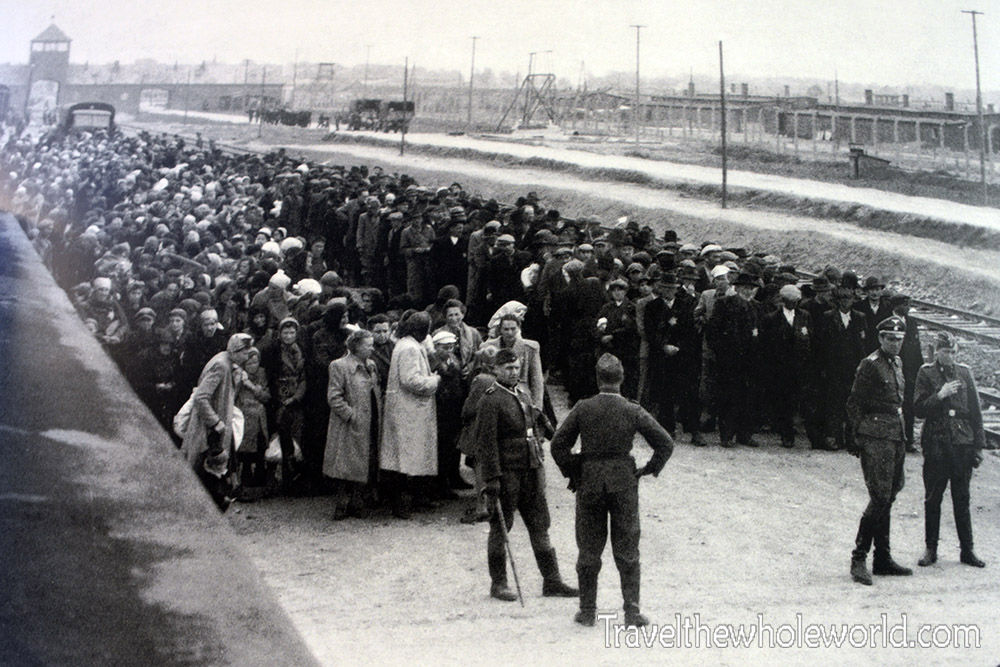 Auschwitz II–Birkenau is the first camp that I visited. It was built as a way to expand the original Auschwitz camp which was over capacity. My understanding is that Birkenau initially was to be a forced labor camp, but after Hitler decided to completely eradicate Jews the role primarily became an extermination camp. One of the most humanizing parts of visiting Auschwitz for me was seeing actual photos of the victims. It’s difficult to see the real faces of people who arrived here and knowing what fate awaited them. 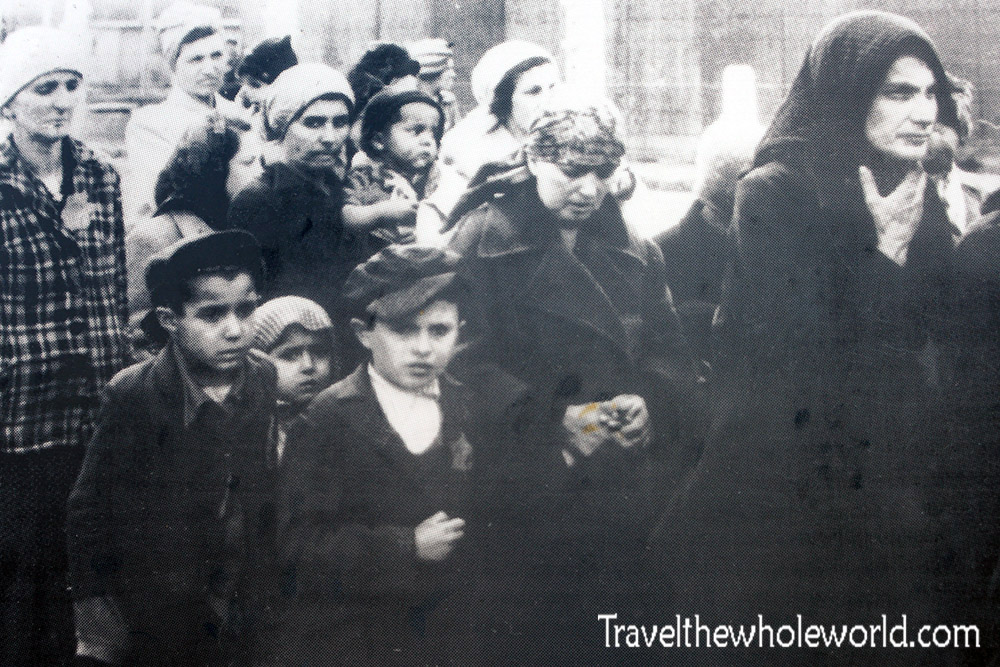 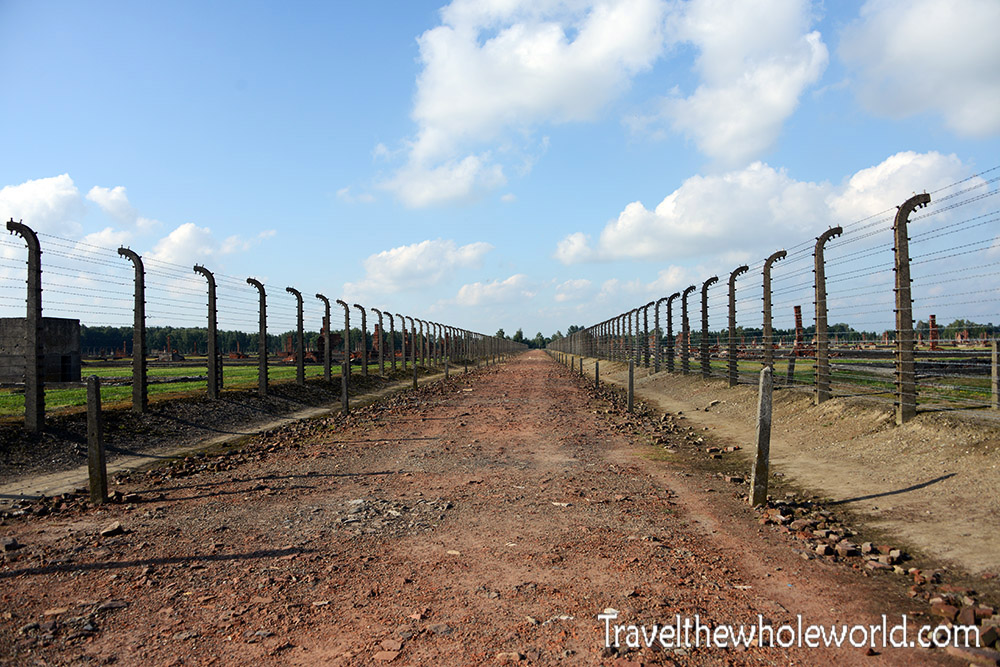 As the camps became more brutal, the Nazis became more direct with their goals. New arrivals were immediately inspected to see if they could work or not. Those who could not work were sent down this path, known as “Death Road”, and were usually killed within hours of their arrival. 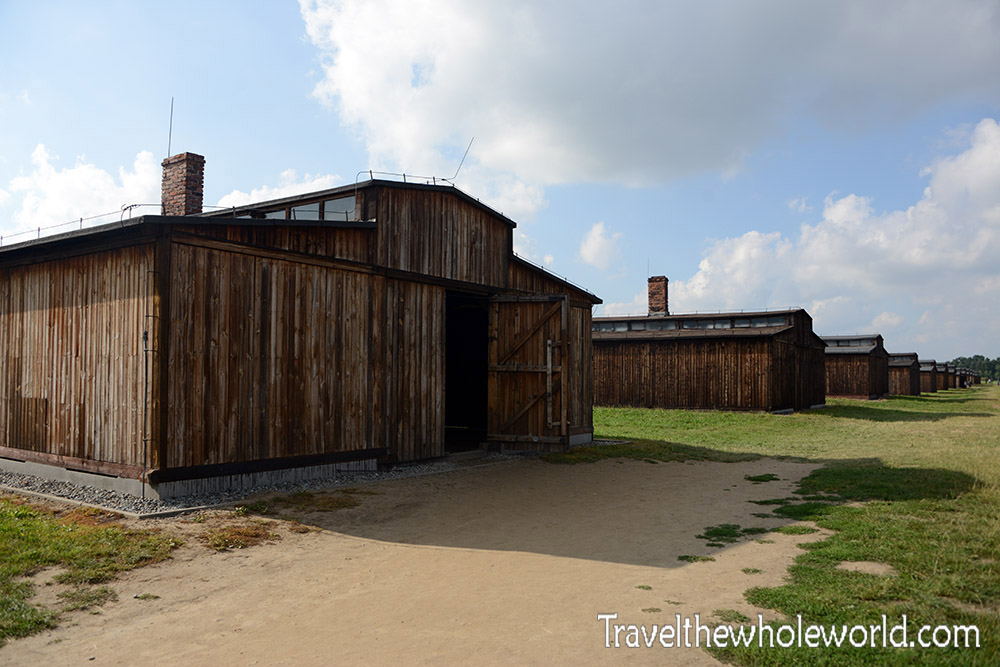 The rest who weren’t immediately killed stayed in these primitive barracks, sometimes as many as 700 in a single building. As you can imagine the conditions were absolutely terrible, and many people died from disease and starvation. 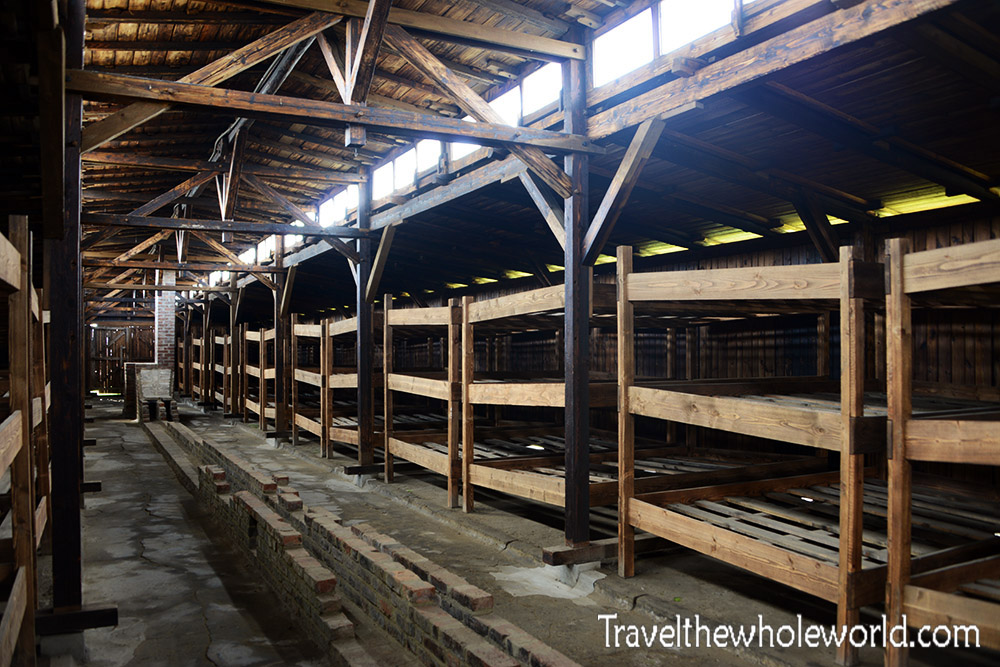 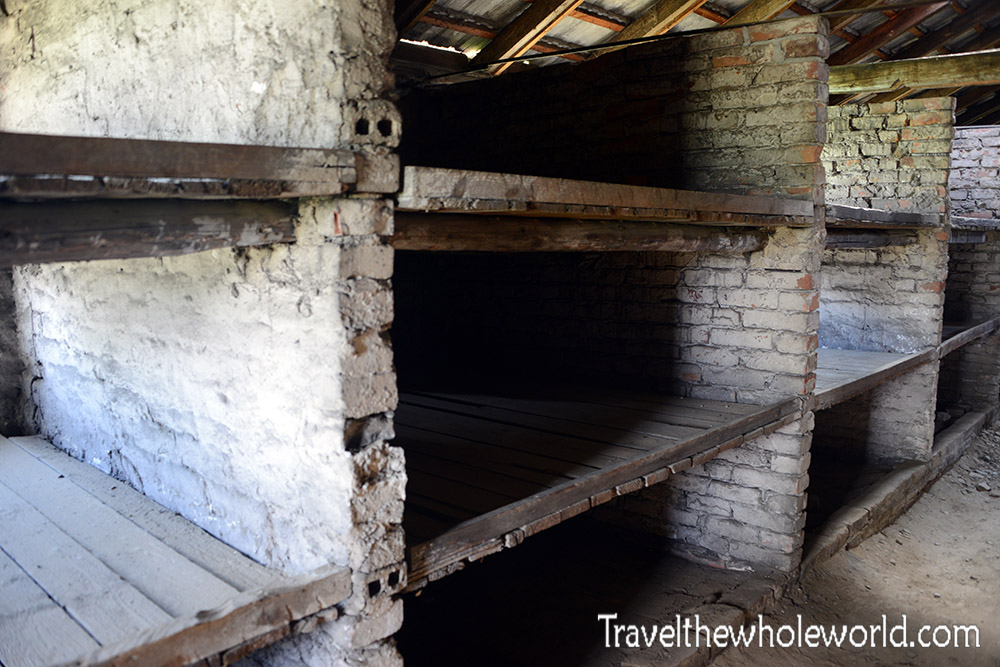 These barracks were set aside for female prisoners who could no longer work. The women sent here were essentially sentenced to death, which was usually carried out by a gas chamber within a day or two. Once in these barracks the women weren’t given any food or water, and some died in this building before being sent to the gas chambers. 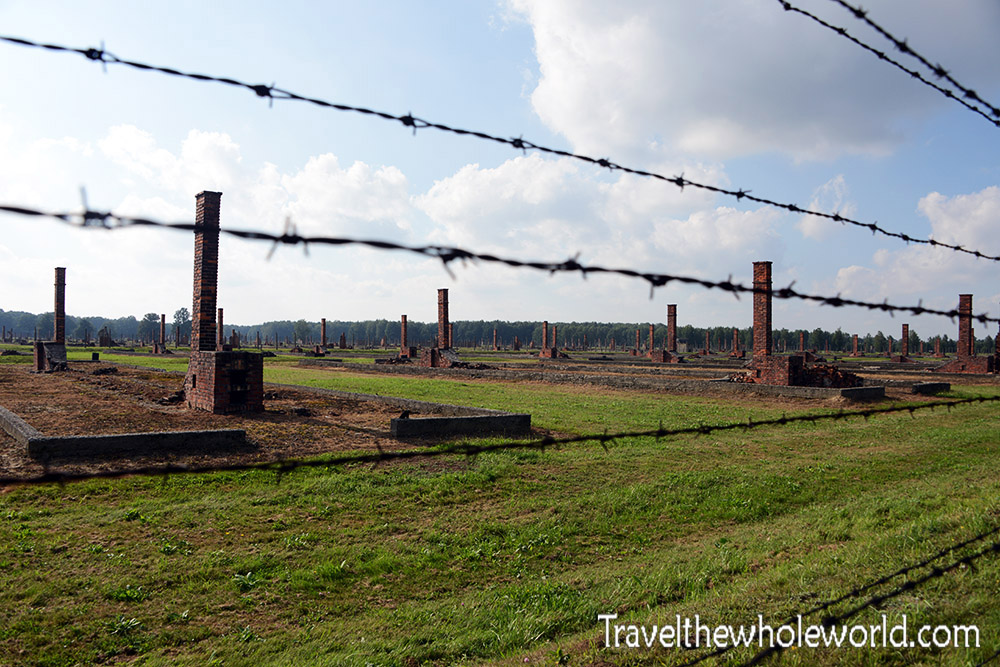 My final photo from Auschwitz II shows the chimney stacks of barracks that have survived over the past half century. Eventually this place will completely crumble to the ground, but as of now it was recent enough that the chimney stacks still stand. 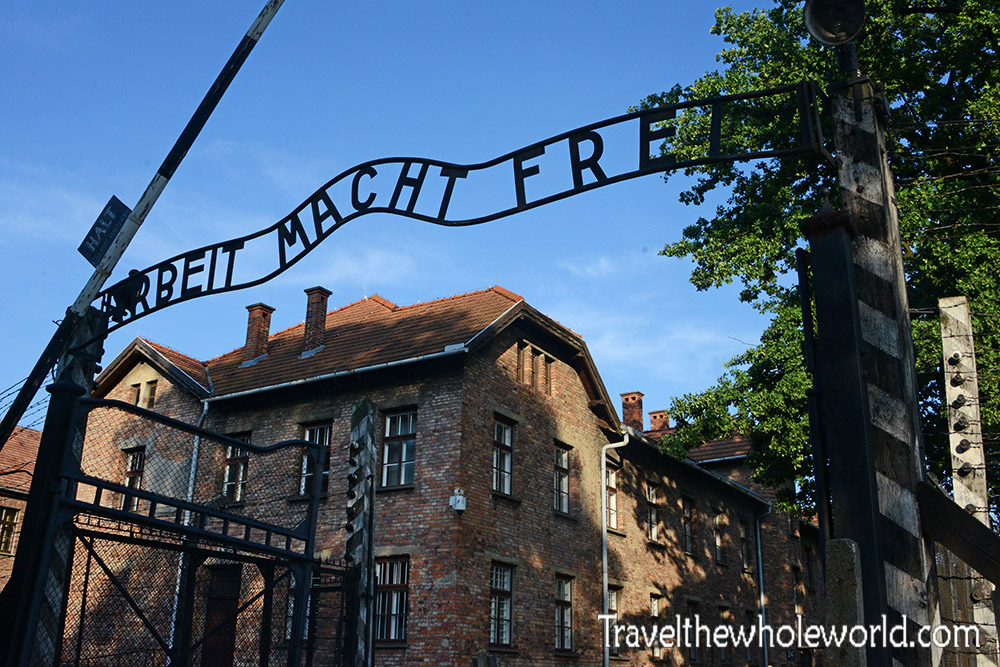 After visiting Auschwitz II, I went to the main camp which is located only a few miles away. I had seen this sign above in documentaries and other photos, but I had forgotten about its existence until I saw it in person. The sign translates to “Work Sets You Free”, which was of course a lie. When researching the sign I was surprised to see that a few Polish people had recently stole it, which required them cutting it into pieces to remove. It was recovered, and it looks like it they did a good job restoring it. 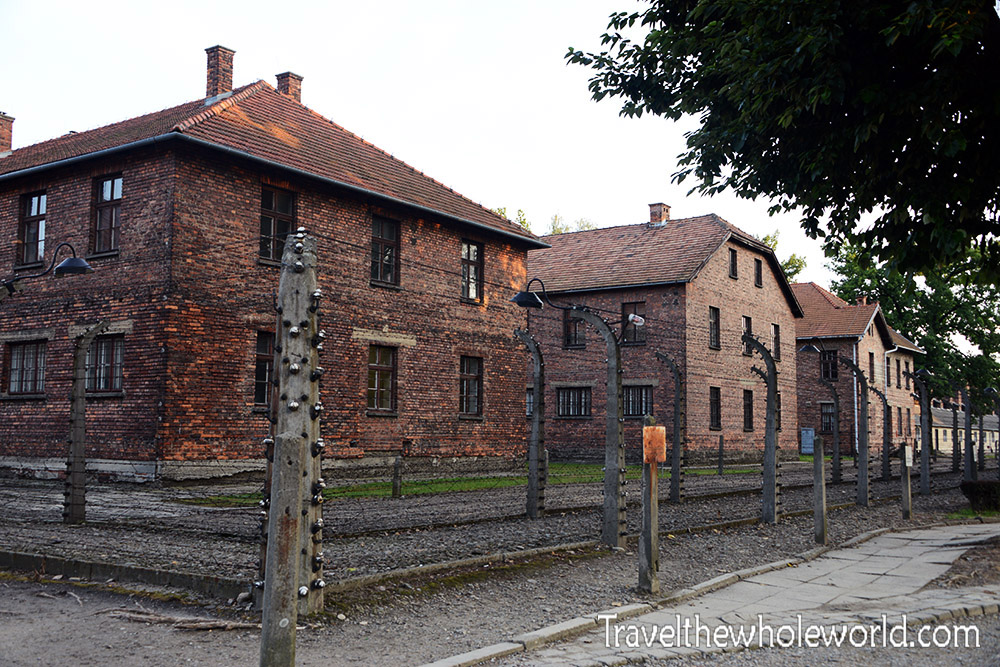 From the outside, the barracks in Auschwitz almost look like they could be regular apartments. This kind of makes it worse somehow to know of all the torture and lives that were lost here. Auschwitz I looked to be a better constructed camp than Auschwitz II, maybe because originally this was intended to be a labor and POW camp. As a matter of fact, the first occupants of Auschwitz I were mostly Soviet troops. 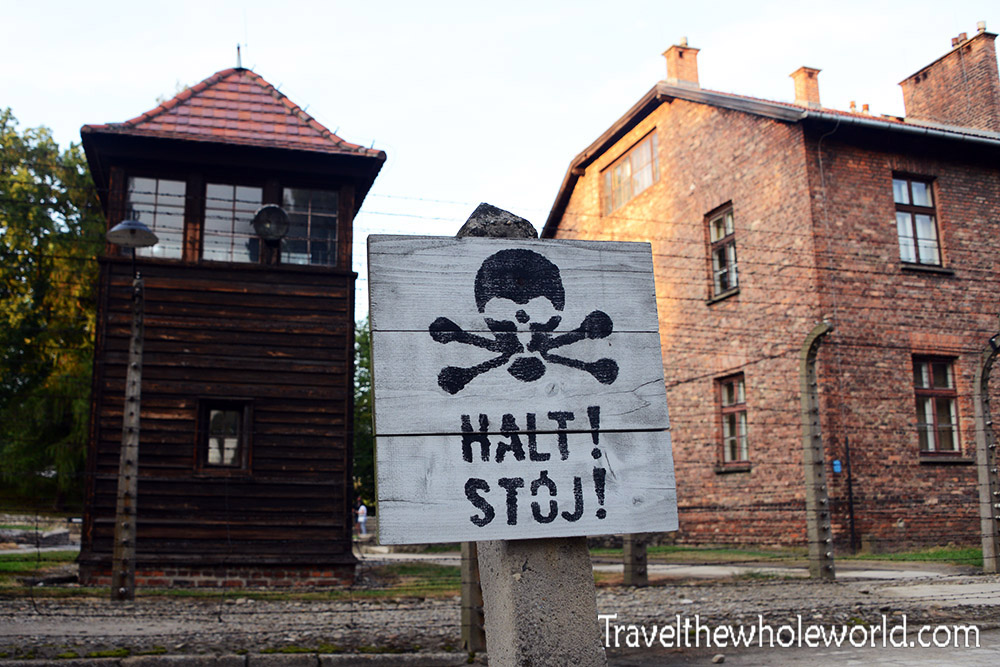 I assumed that the Soviet prisoners who were first brought here were treated better, but this turned out not to be the case. The first occupants of Auschwitz where 10,000 men from the Soviet Red Army. Within five months, 90% had died from forced labor, execution, gassing, and torture. It was reported for example if some refused to work they were covered in wet water and sent outside until they froze to death. 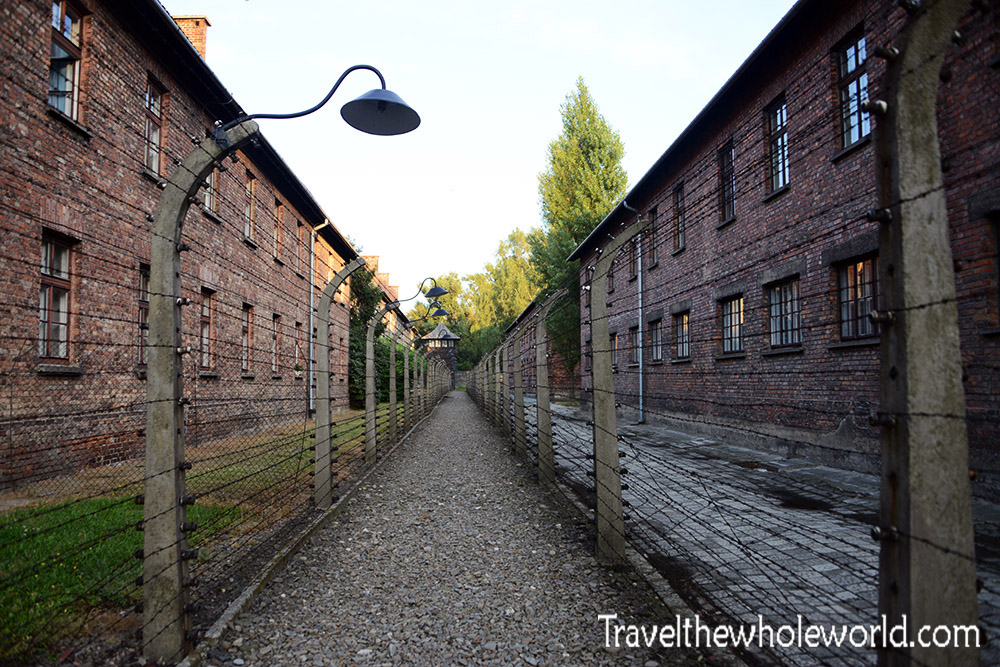 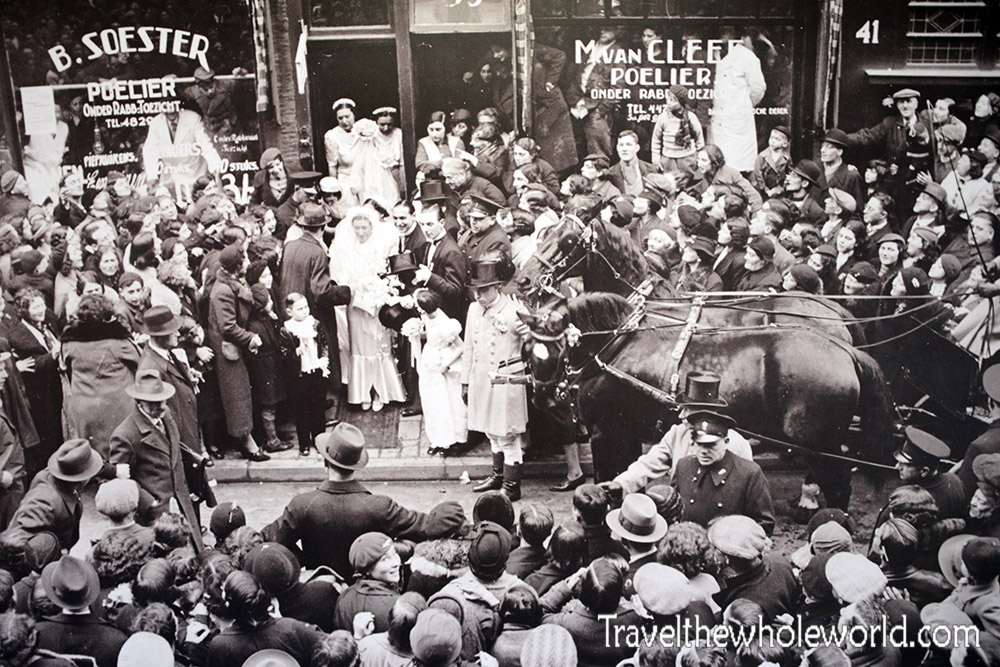 Most of the barracks here have been converted to museums where each building has a different sfocus. The first one I went to happened to show the history of Jews in Europe prior to World War II. This one above shows a wedding or some celebration in the 1930’s in the Netherlands. Clearly much happier times when everyone lived together peacefully. 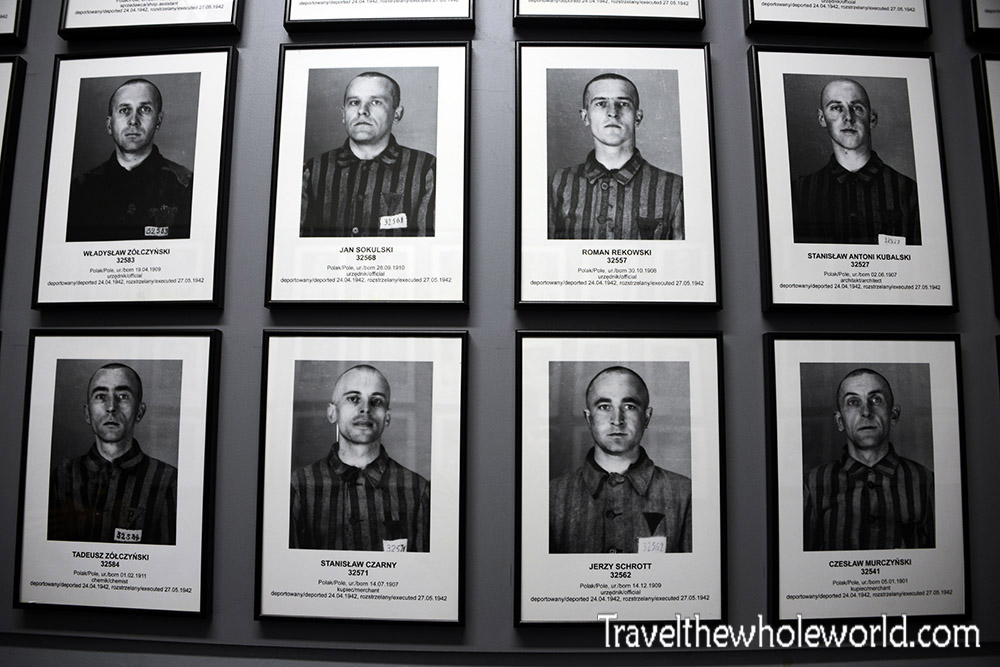 Several of the barracks had photos lined up of victims, grouped by men and women. Also were mounds of personal belongings on display, such as these shoes below. 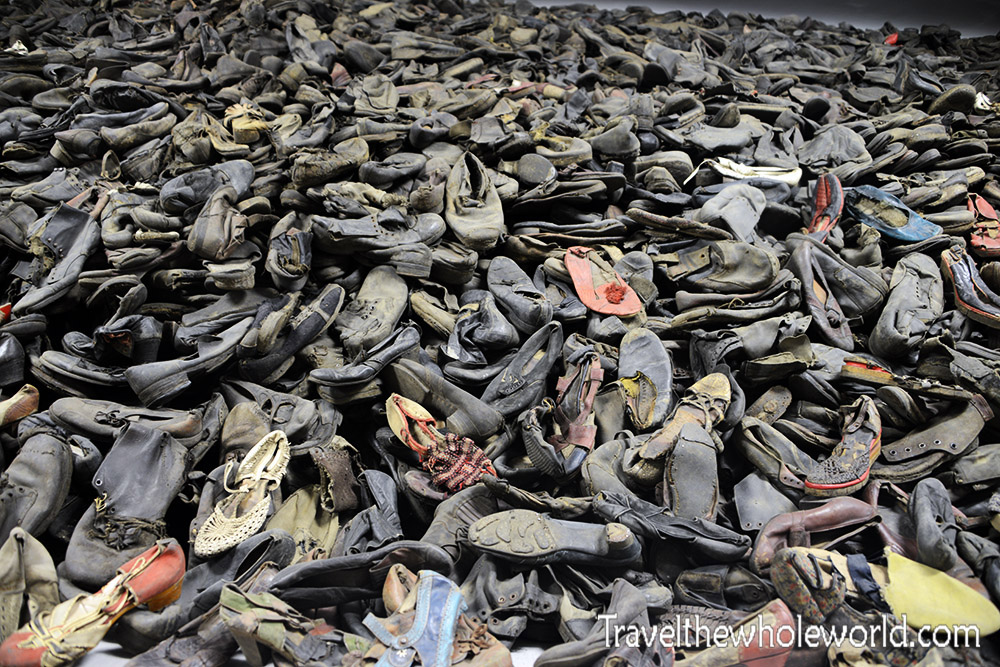 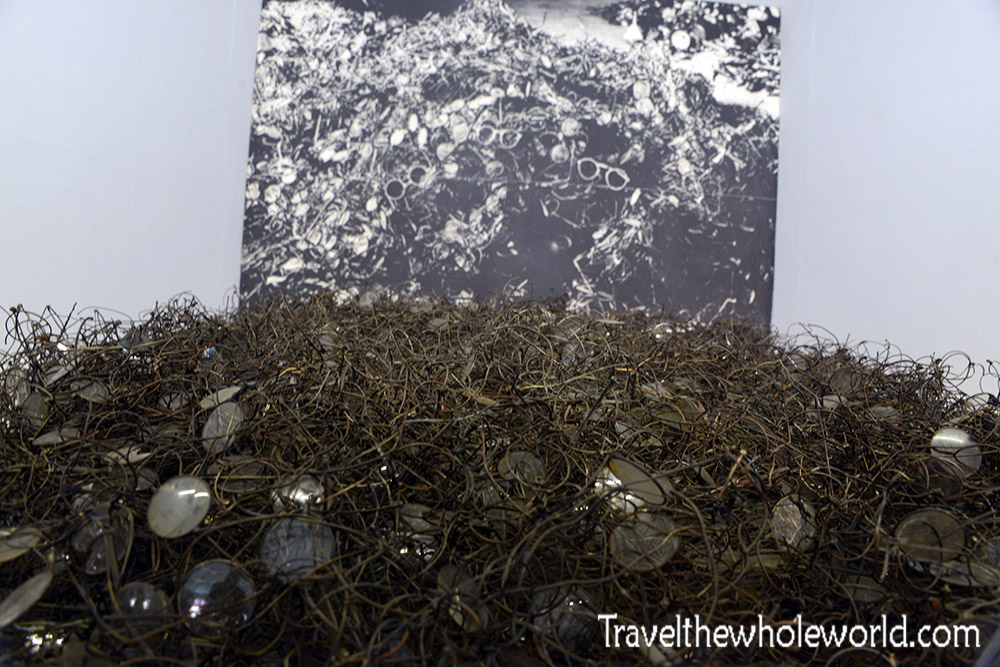 When Auschwitz was liberated by the Soviets, they found 15,000 lbs (6,800 kilograms) of human hair. This was one of the few things we weren’t allowed to photograph, and also was one of the most disturbing. These other two mounds of personal items were in the same barracks, and include glasses above and prosthetics below. 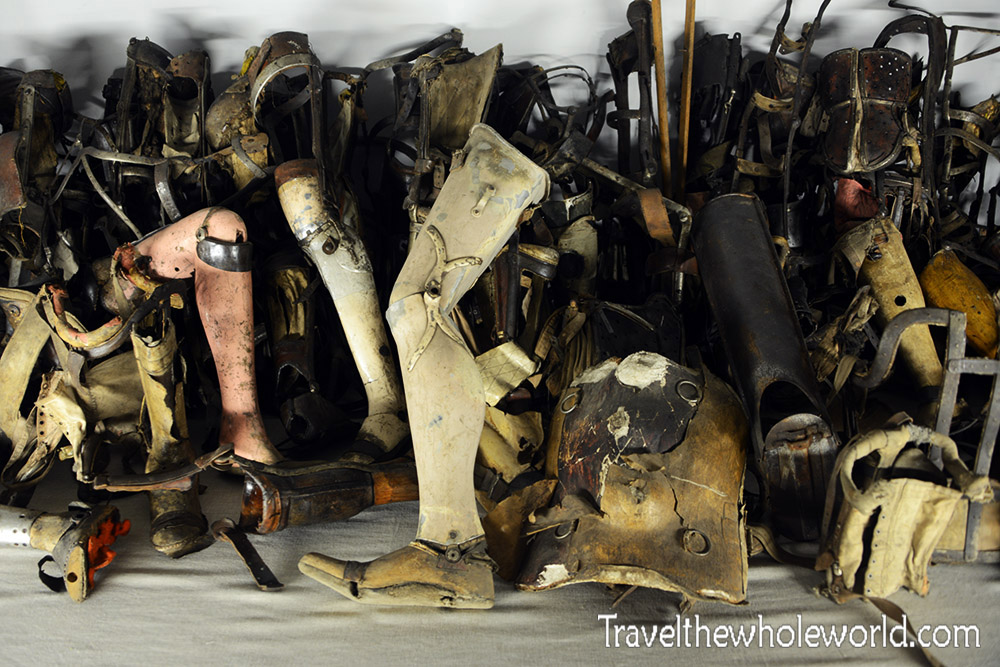 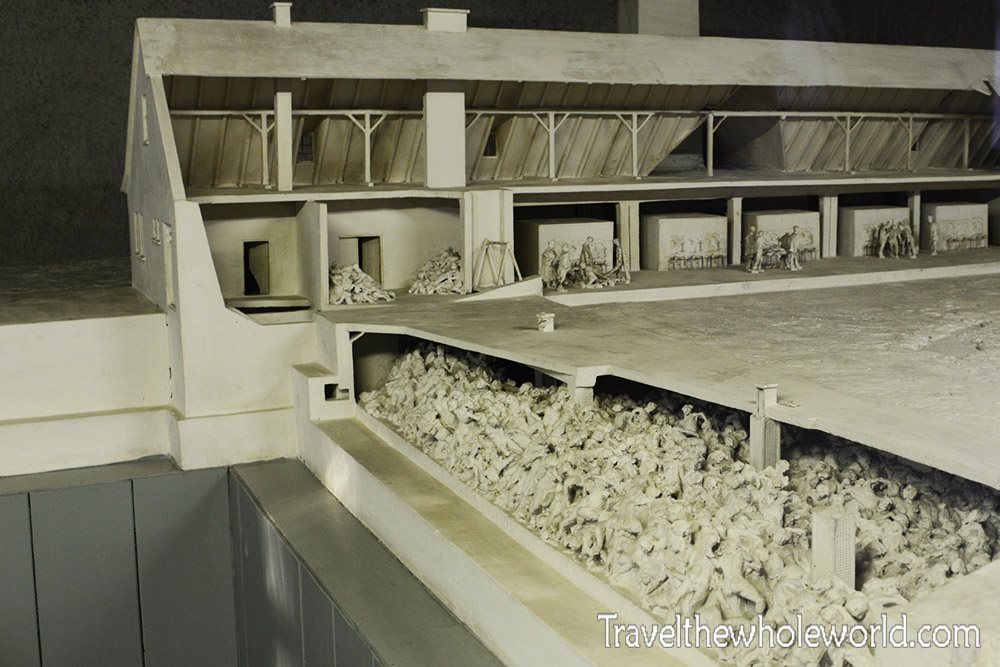 Lots of sections were also dedicated to gas chambers, as this is how the majority of the people were killed. Many of the barracks had underground rooms that were modified to gas people in large numbers. The reconstruction above shows an example of how this was done. The photo below shows a pile of used canisters. 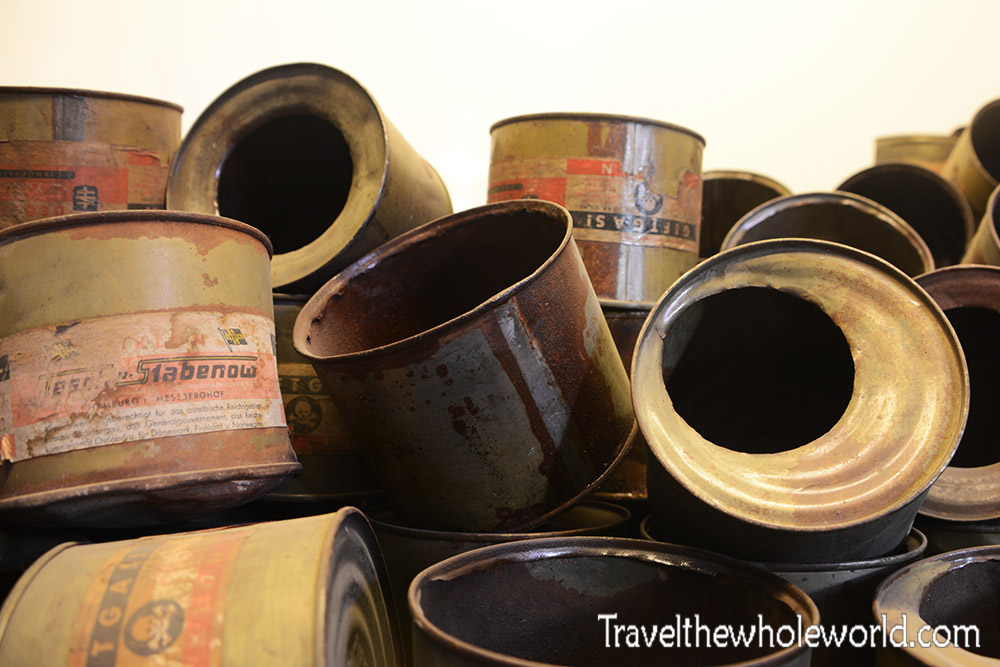 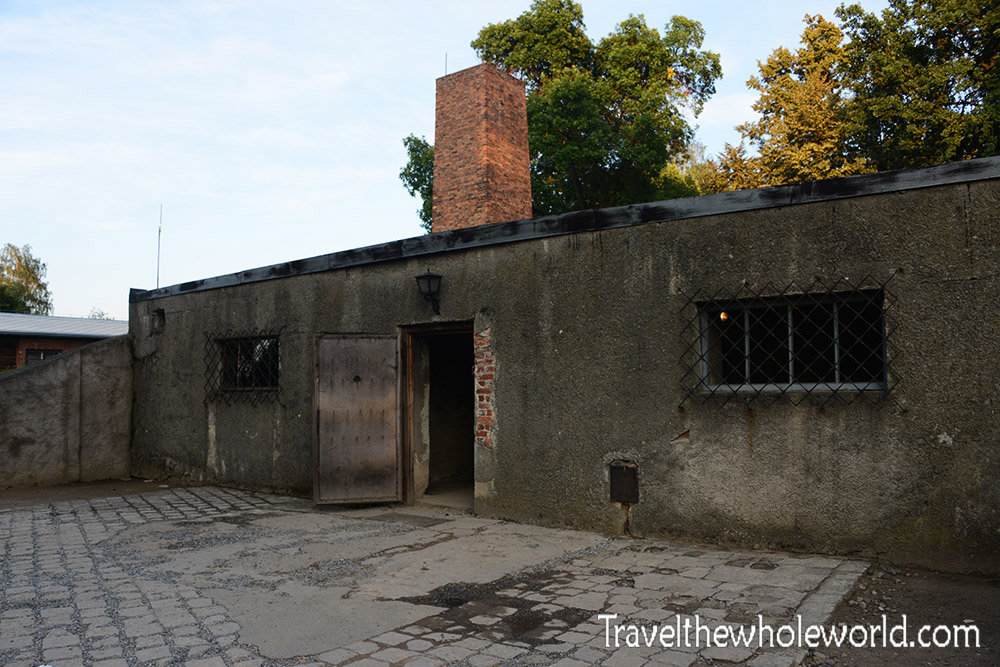 This building was originally a munitions storage site, but was converted by the Nazis to a gas chamber and crematorium. It has become one of the most famous images of a gas chamber, largely because of the numbers of victims that passed through here. 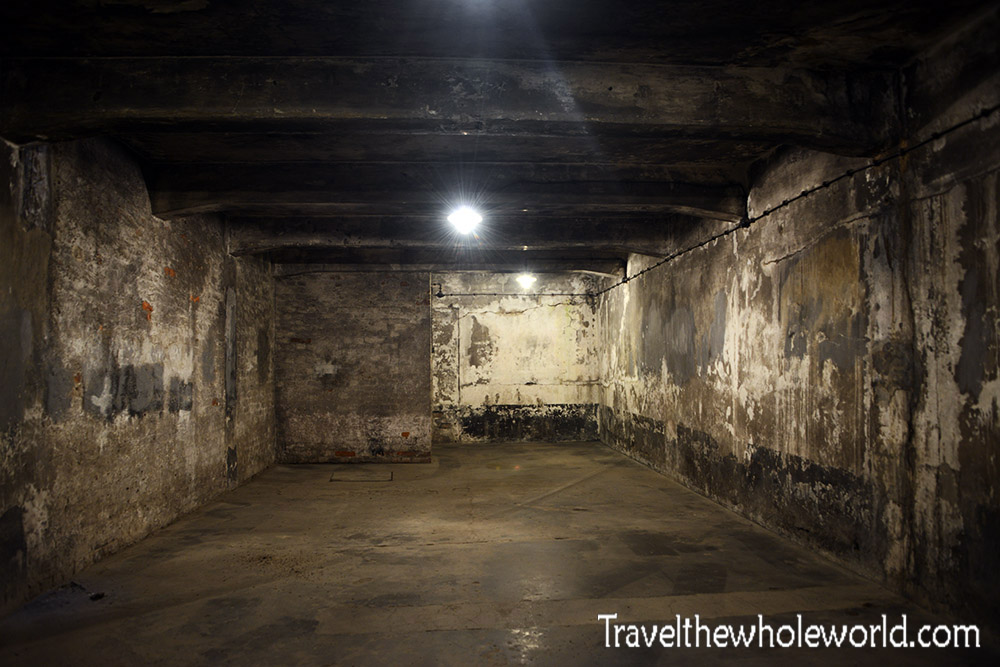 The victims included Jews, Soviet troops, and anyone who could no longer work regardless of their nationality or race. Eventually at its peak, this crematorium process an incredible 6,000 people a day. That almost sounds impossible, but when you consider over a million people were murdered in the concentration camps then it makes sense. The photo above shows the inside of the gas chamber, and the photo below has one of the incinerators to dispose of the bodies. 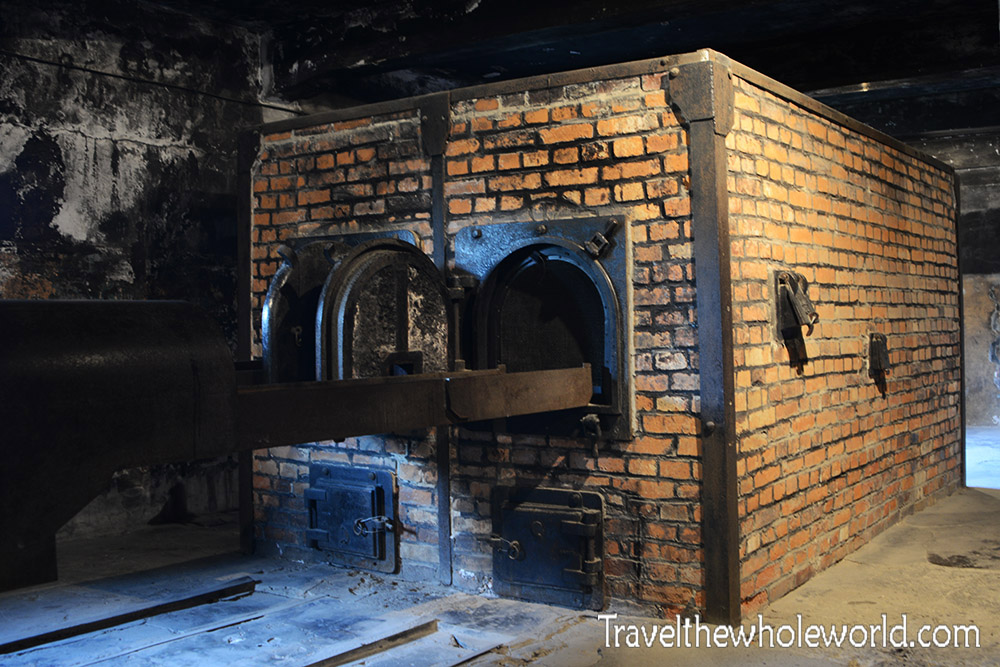 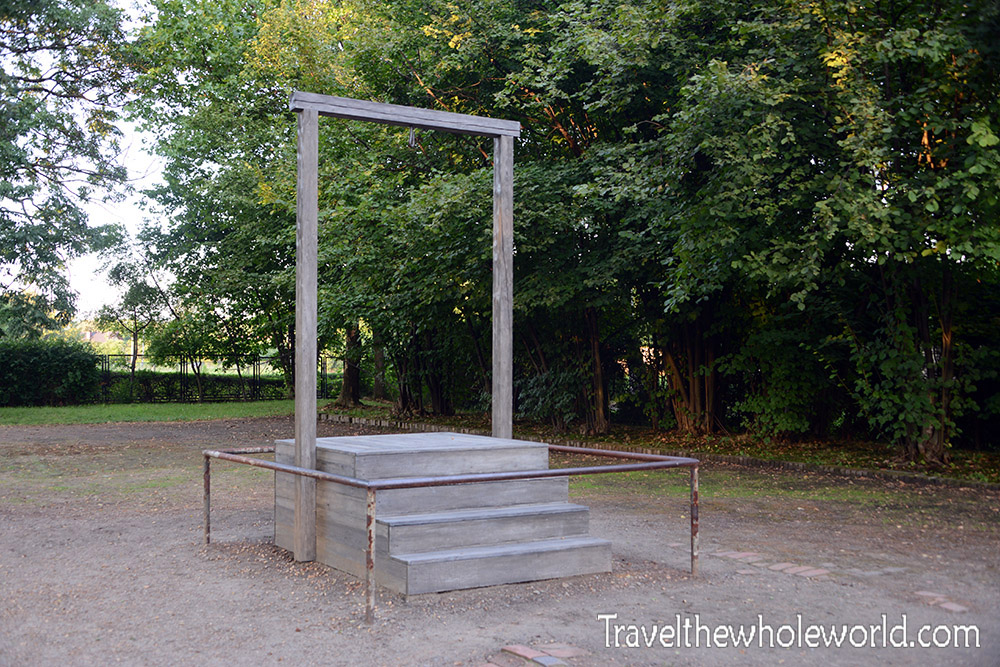 There’s no positive way to end a photoblog about Auschwitz, but the least we can say is that thousands of people were rescued when the camp was finally liberated by Soviet troops. The Nazis who didn’t die in battle attempted to go into hiding or even flee to other countries, some of them successfully. The majority of them were caught, including the head commander of Auschwitz. After the war, he was sent to trial and sentenced to death, and was hung here on April 16th 1947.