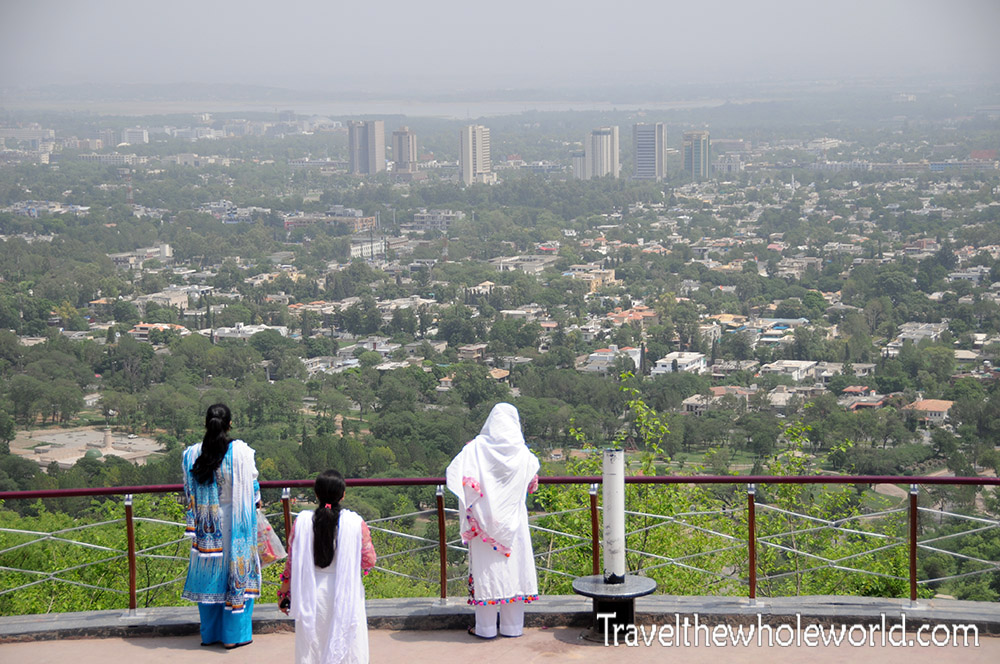 Islamabad! The capital of Pakistan is located at an elevation of 2,000 feet (580 meters) at the foot hills of the Himalayas. What a relief this place was compared to the anarchy of Karachi. I honestly felt like I was in a different country. These surrounding photos were taken from a park known as Daman-e-koh which gives great views of the city. The park itself is very clean and is a world away from places like Karachi and Lahore. It’s also by far the safest and most stable region of Pakistan. It was here that I saw my first fellow Westerners in the country. 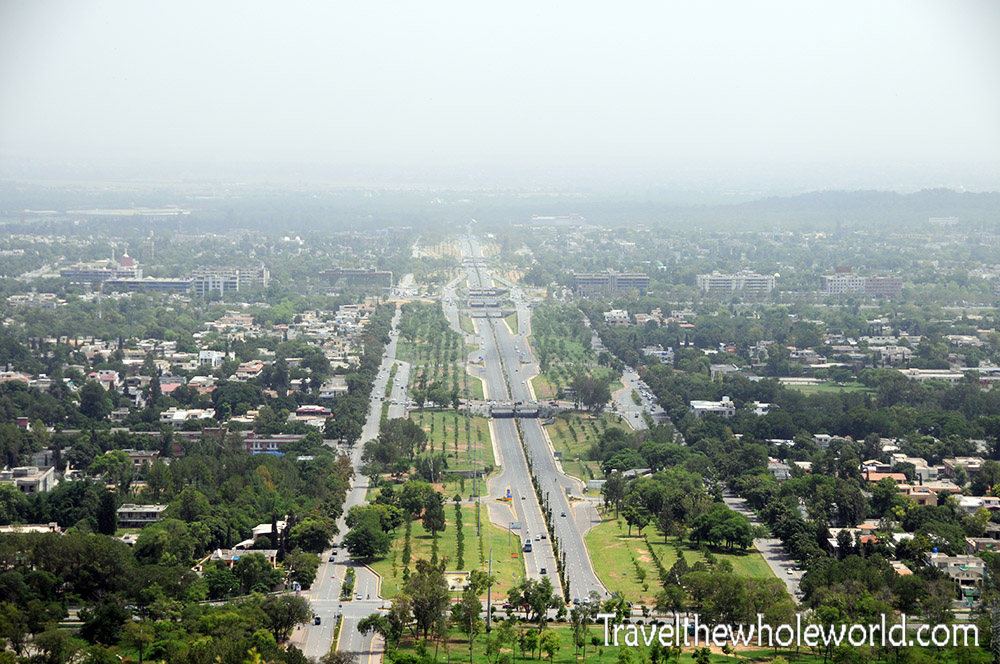 This planned city started growing in the 1960’s, and the designers of Islamabad were nice enough to make overly wide roads and strategically place commercial and residential areas. Despite having a million people Islamabad feels more like a suburb than a metropolitan city. In the photo above you can see that their central highway looks more like a giant landing strip rather than a road! They overcompensated for traffic, and as a result getting around in the city is fast and efficient. 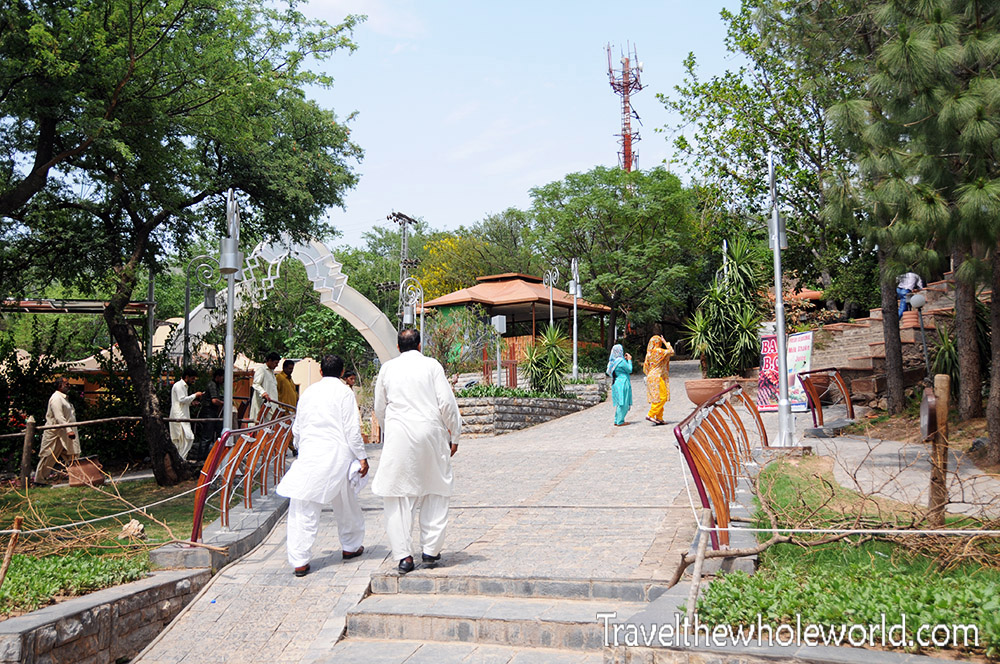 My first two pictures of Islamabad above were taken from Damanekoh Park. This city park has the best views of Islamabad, and plenty of picnic tables, short hiking trails, and even ice cream! I had visited Pakistan after coming from India, and as dirty as some of the places in India can be this place was remarkably clean! 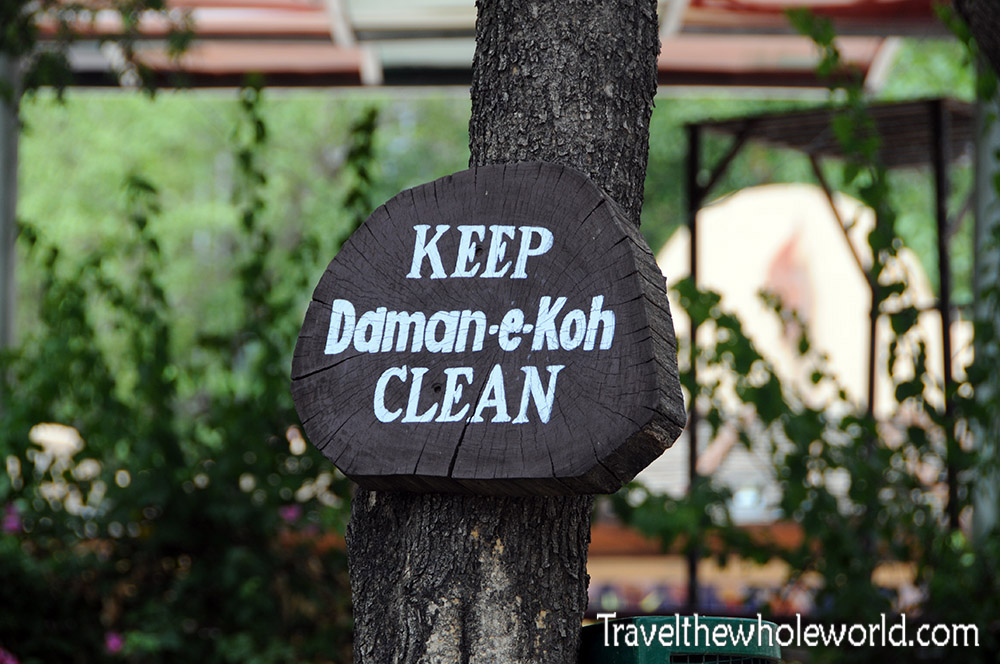 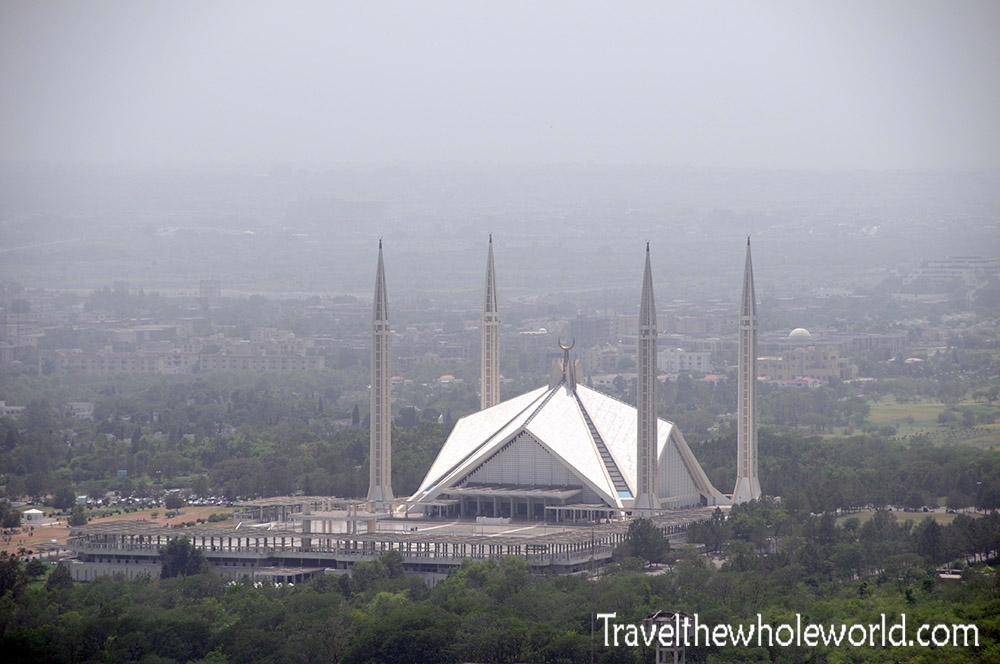 I didn’t make it to the Faisal Mosque, but from here being that you can see the entire city I got a great view of the enormous structure. The Faisal Mosque is the largest mosque in Pakistan, and believe it or not it actually was once the largest in the world from 1986 to 1993. The vast majority of Pakistan’s population practices Islam, but there are a significant number of Christians and other minority religions living here as well. Being a foreigner and all, every time I came across a Christian they would be excited to see me and always invite me to their church. 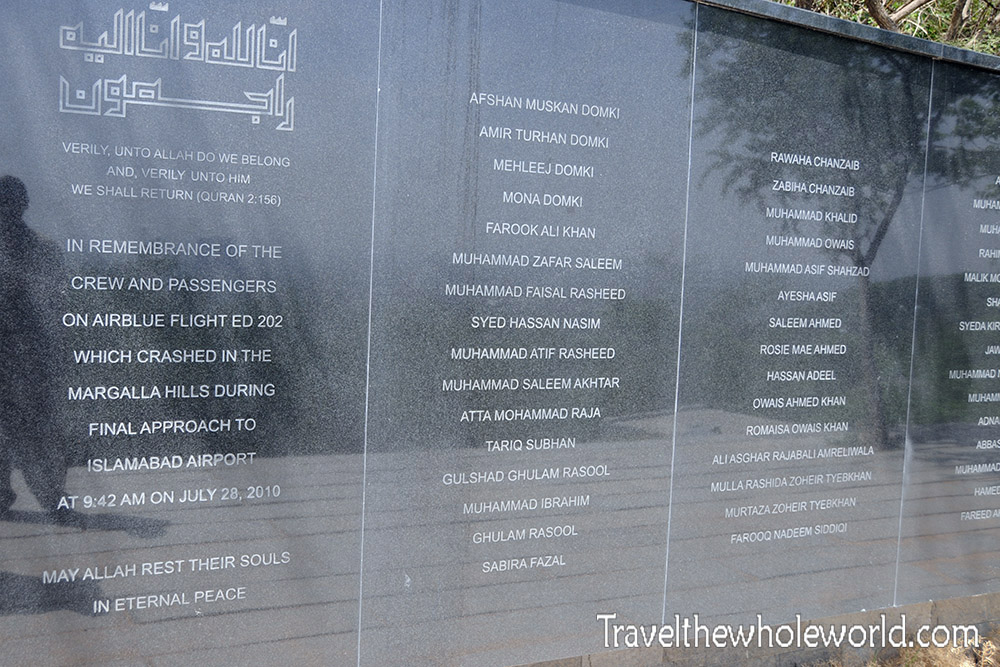 Right after I saw the mosque I returned to the city and on the way I came across this memorial for flight ED 202. The memorial was placed at the location of the crash that killed all 146 passengers. It had happened relatively recently when I had visited, only a year or two before. There were lots of people visiting the memorial when I came by. None of them seemed to be relatives but were rather just visiting out of respect. Several of them made some attempts to convert me to Islam. 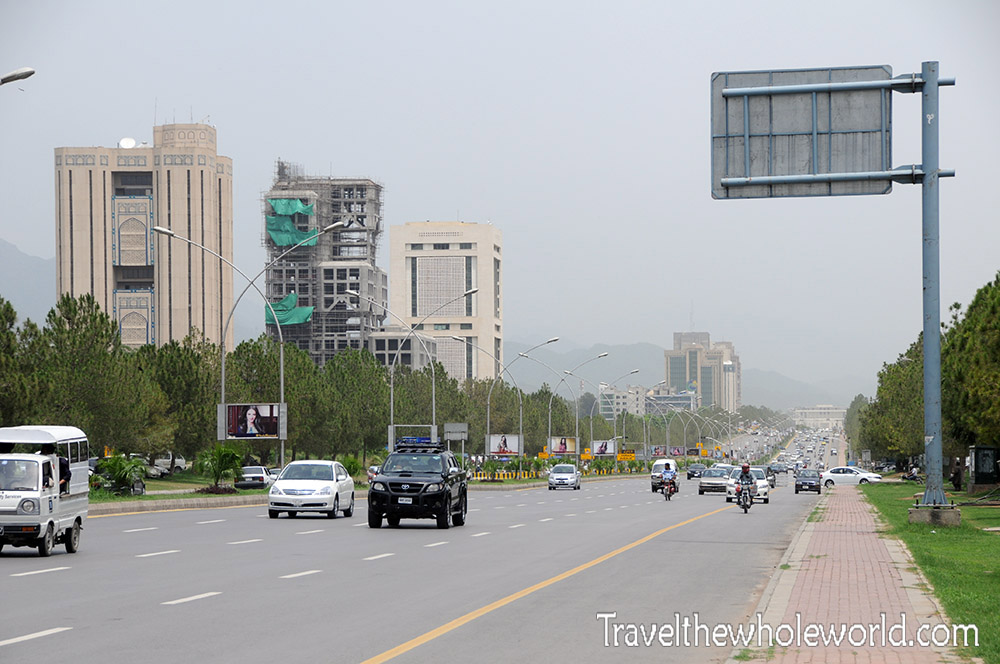 So I loved Damanekoh park for being so clean and organized, but the rest of Islamabad is also well taken care of. Immediately outside of the city is another place called Rawalpindi and some other suburbs that look more like the typical Pakistan you’d expect. Downtown Islamabad is home to many large buildings, hotels and restaurants. There are lots of international places to dine at, so if you’re craving some western food like I was you won’t have an issue satisfying yourself. I actually went into a Subway restaurant that I saw simply to buy a cookie! And I’m all about trying local cuisine, but I visited during Ramadan and all restaurants were closed during day light hours though. Except for of course, Domino’s Pizza! I shamefully traveled to Pakistan during Ramadan and ate a real pepperoni pizza. Below is a shot of some of the newer buildings that were recently constructed in Islamabad. 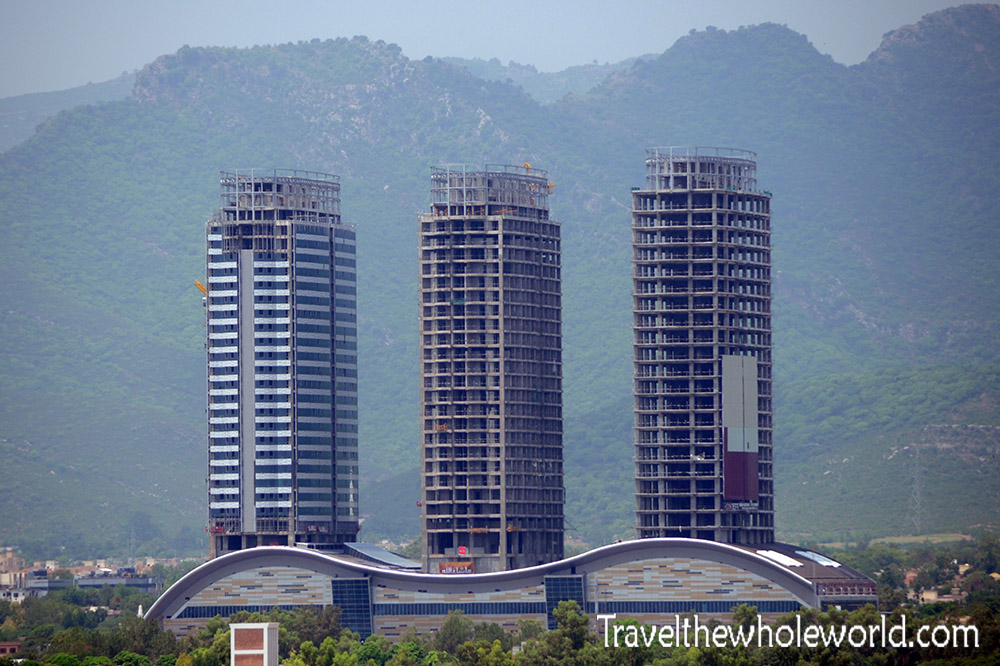 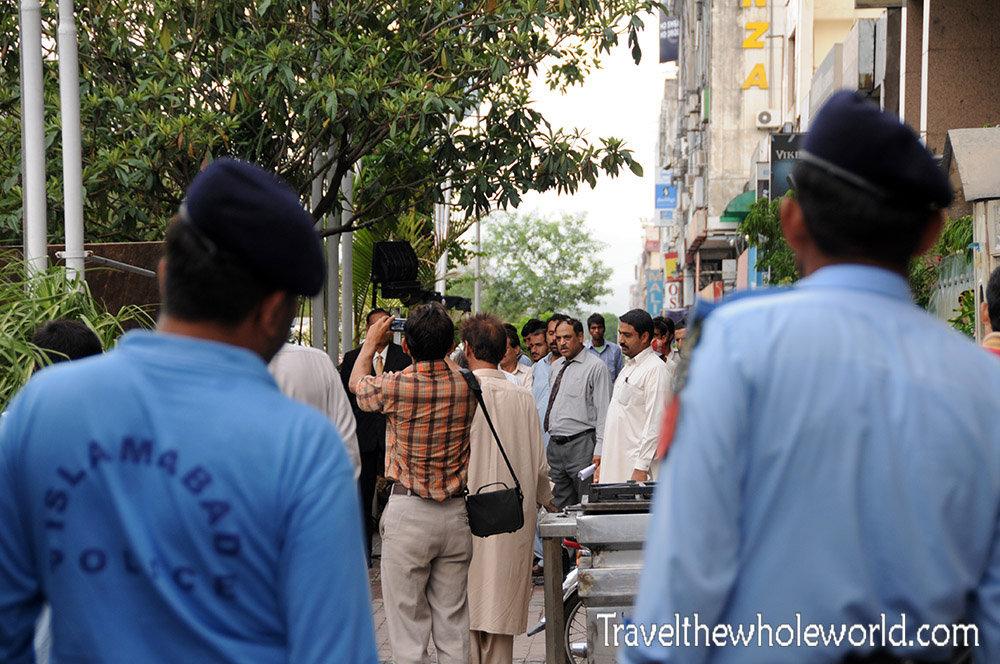 Islamabad was safe enough that not only did I walk around during the day alone but also at night. I’m not sure what the crime rates are in Islamabad, but I’d imagine them to be incredibly low, even when compared to Europe. The only drama I ever saw was some crowd gathered in the street. There was a news reporter doing a story but I never quite understood what was going on. Some police in the area were watching but seemed unconcerned. 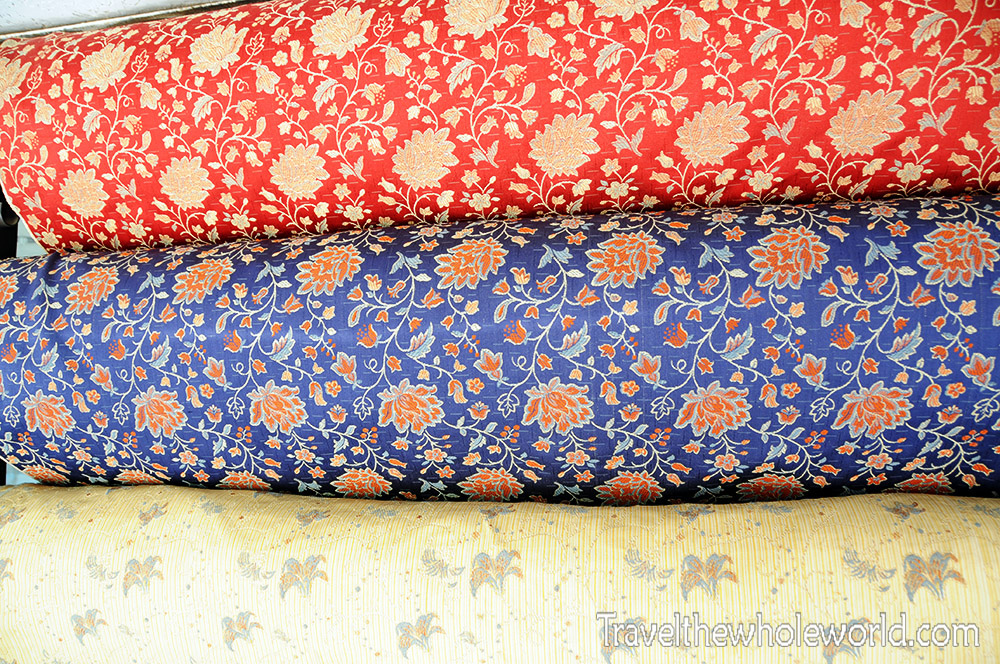 You can pretty much buy almost anything in Islamabad, from the silk above to various electronics and even top quality mountaineering and rock climbing gear. I had forgotten some things at home on this trip like chargers, sunglasses, sunscreen etc, but I was able to quickly find everything I needed in just a few blocks in the city center. 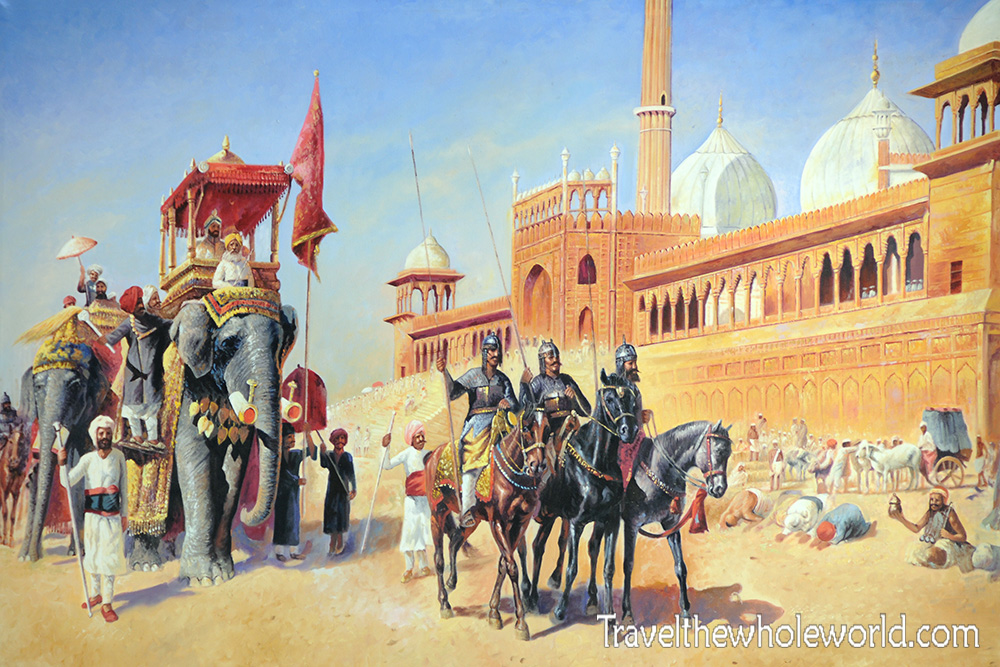 Although I didn’t get any souvenirs from here, this market is a great place to start. They had lots of artwork available such as this painting of what Pakistan looked like during the colonial times. I did purchase a souvenir from another city in Pakistan that was a large Islamic knife framed in glass. I actually forgot about it and flew back home with it in my carry all the way to the United States and no one found it! 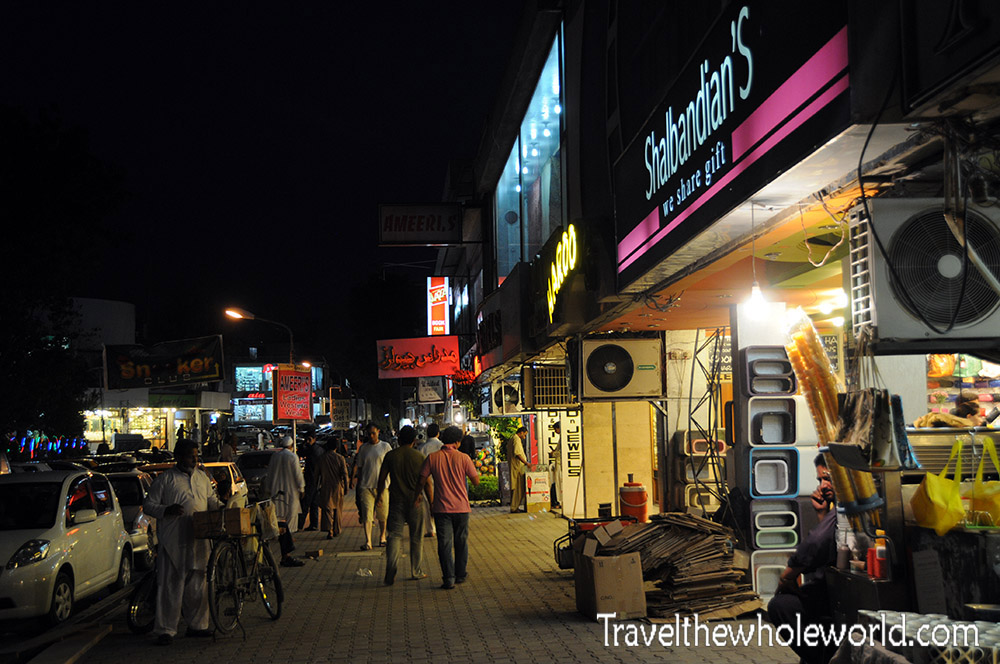 This photo shows the Jinnah market at night. This is more of a shopping district rather than the typical market you’d expect from a third world country. In the Jinnah market I went to an Afghan restaurant along with a local and indulged on kebabs, salads, and Afghan nan shown below. 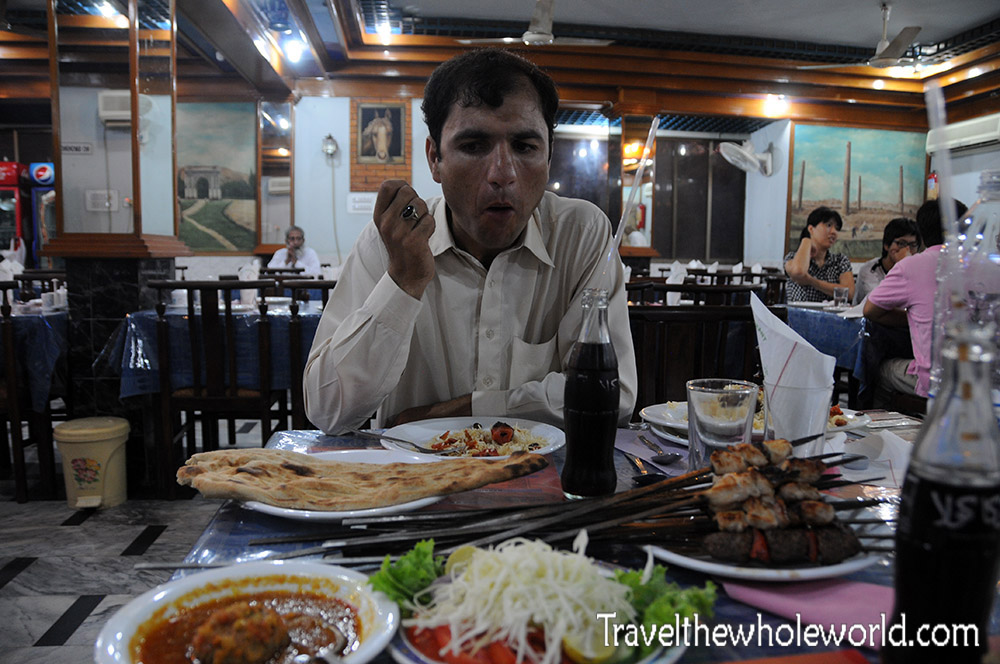 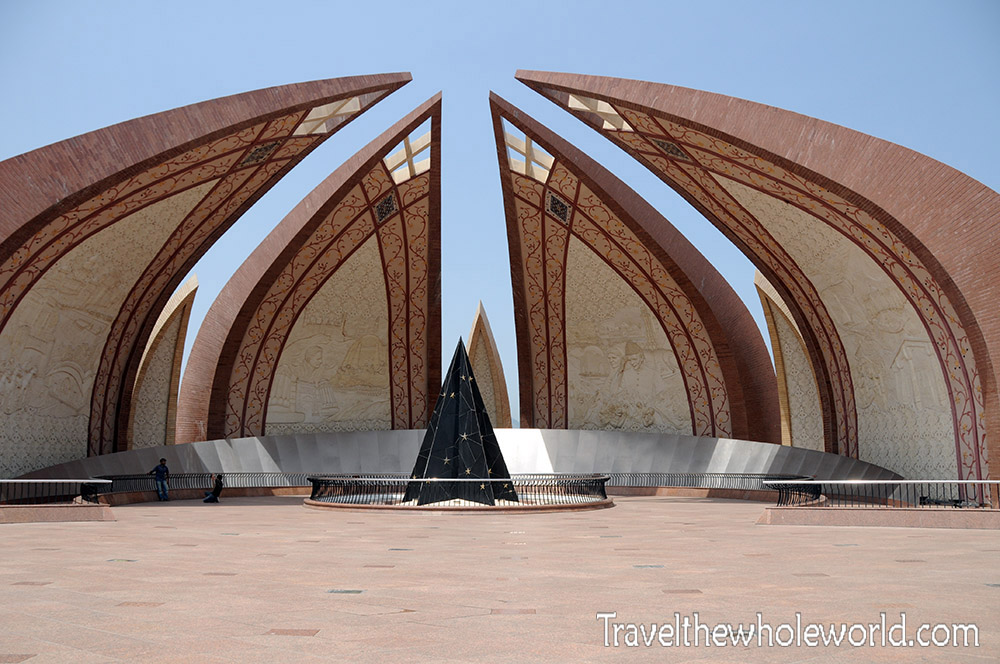 Possibly the most famous icon in Islamabad is the national monument of Pakistan photographed above. The monument represents a blossoming flower, with each petal representing one of the four major regions of Pakistan. The photo below shows some details of the monument that depicts Muhammad Ali Jinnah, the often considered to be the founder of Pakistan after the country achieved independence in 1947! When I was walking around here I heard a girl with an American accent and it turned out she was born and raised about 20 minutes from me in Virginia! She seemed a little reserved and after talking to her for a few minutes it started to feel like I was in Clarendon Ballroom so I had to move on to the national monument museum. 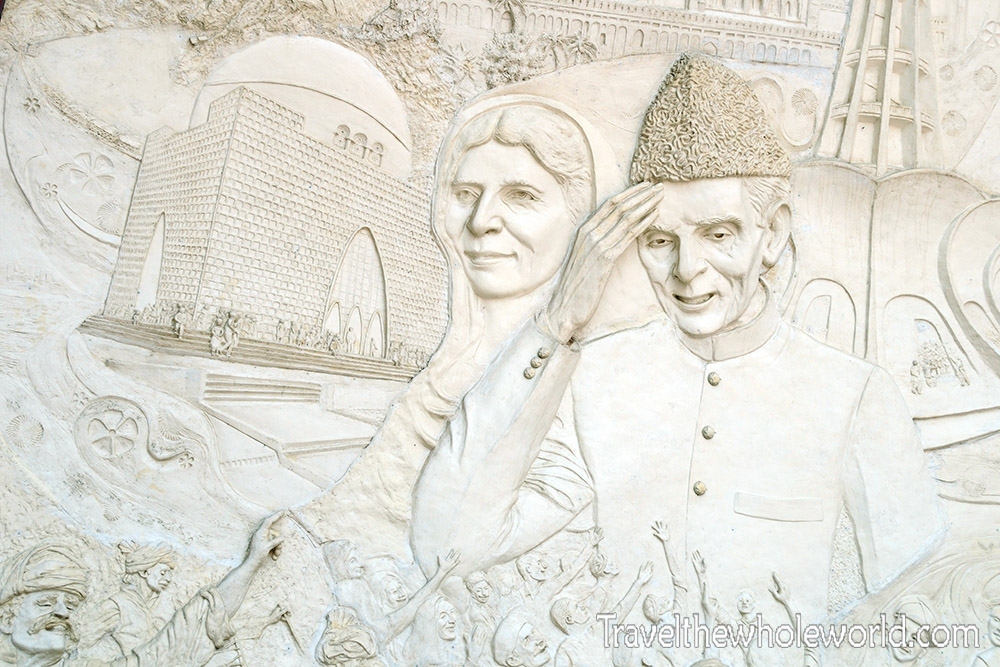 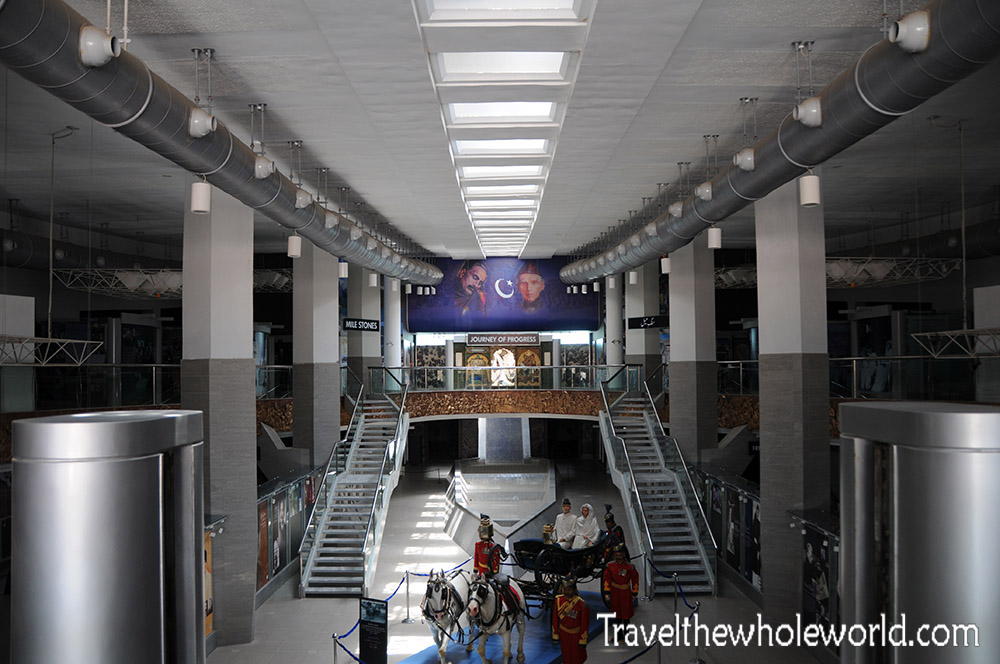 Sadly the museum was closed actually. From the front door I could see how massive and modern it was. Luckily though there were still some people inside who at least allowed me to take a photograph of the entrance. I’ve heard great reviews of the museum and don’t doubt it’s one of the best in the entire country, or even surrounding region. Next time! 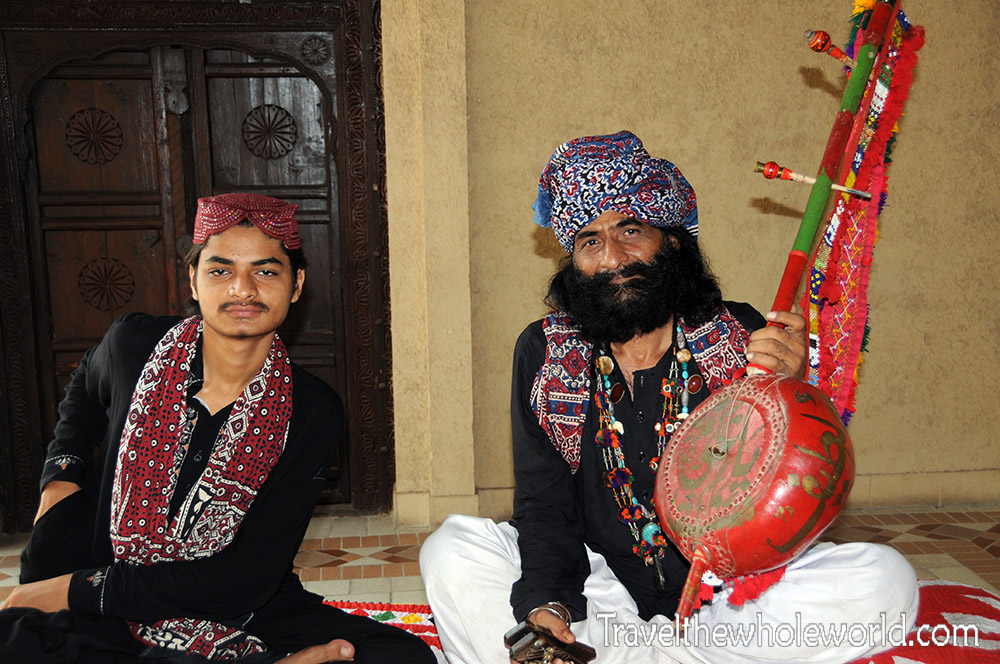 Outside another area in Islamabad I came across these two guys who were absolutely awesome! The two of them both played songs that are popular in the southern regions of the country. Both of them played musical instruments while the older man did the vocals. I really wanted to talk to them afterwards because they seemed very friendly, but the language barrier proved to be too difficult. 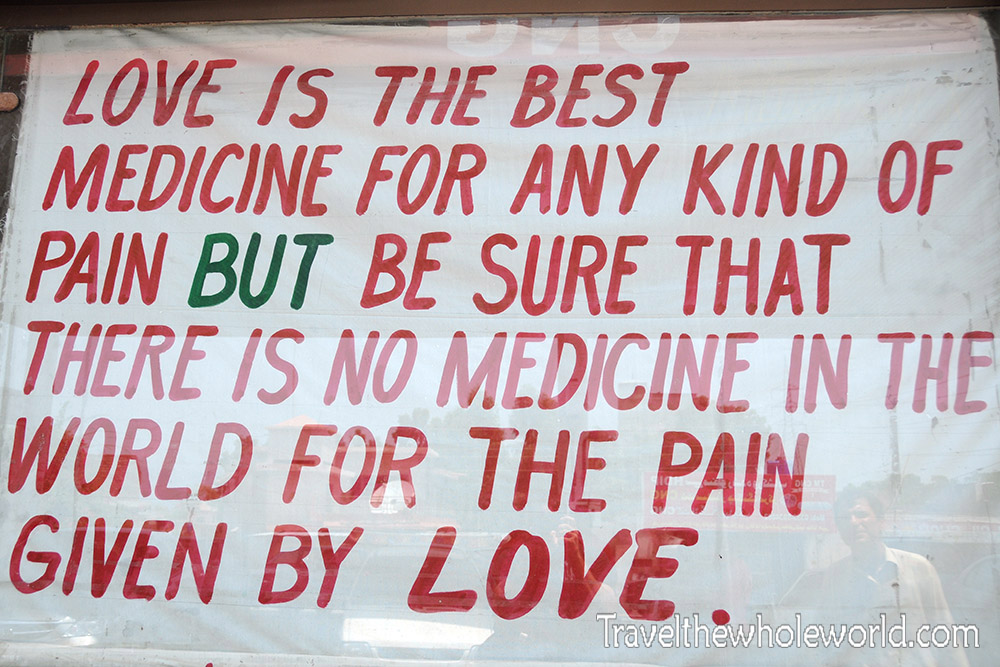 And my final photo from Islamabad is completely random and was posted in a gas station of all places. I found it to be interesting though because it’s definitely not the message that most people who know little about the country would expect to find posted publicly in Pakistan.