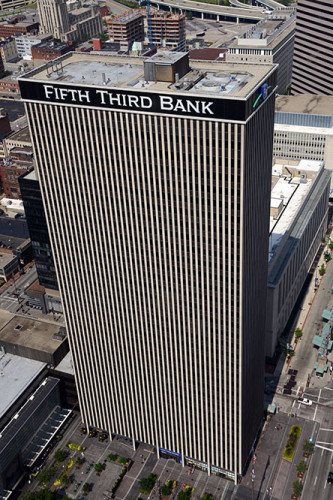 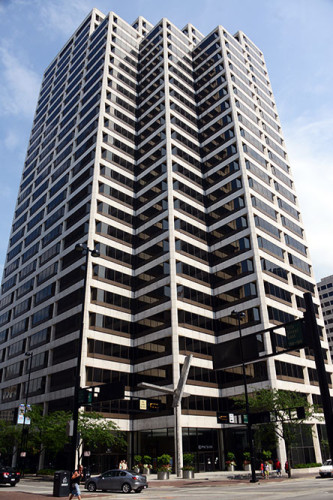 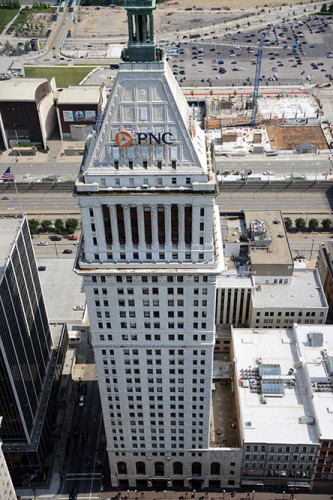 Cincinnati is Ohio’s third largest city, located on the state’s southern border along Kentucky. The downtown city has about 300,000 people while the metro area passes two million. Downtown Cincinnati has it’s share of high rise buildings such as these guys above. Better yet, the Carew Tower which is the city’s second largest building has an observation deck. With the exception of the upper left photo, the surrounding pictures were all taken from the Carew Tower. It’s a great place to see the immediate high rise buildings as well as some of the distance neighborhoods. You can also easily look across the Ohio River and into Kentucky. 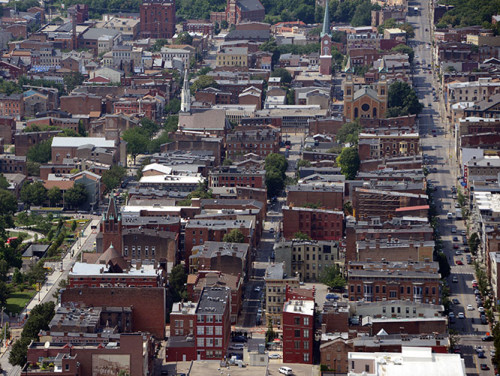 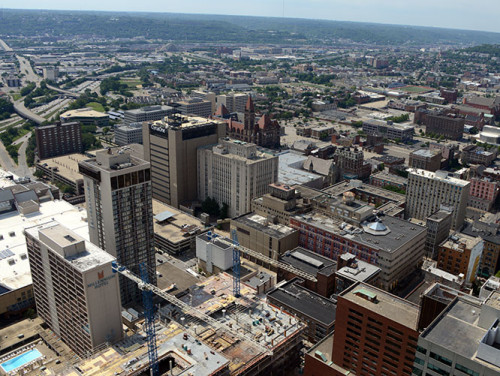 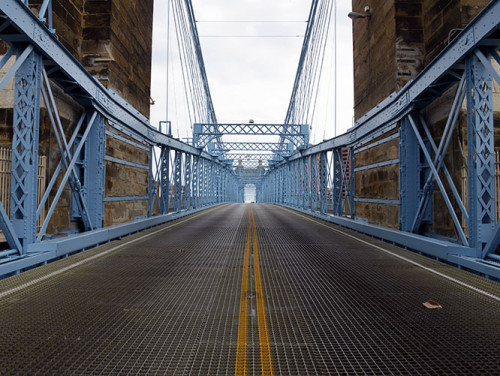 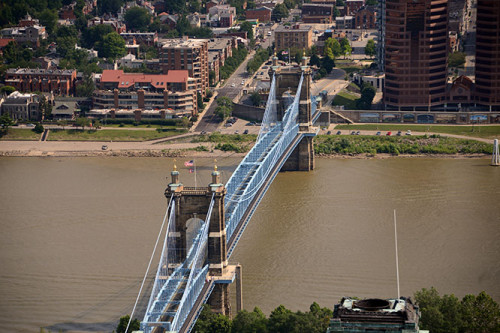 When I visited Cincinnati, I actually just parked in Kentucky right across the Ohio river and walked across this suspension bridge. This famous bridge was finished in 1867 and is called the John A. Roebling Suspension Bridge. At the time of it’s completion, it was the largest suspension bridge in the world and spans over 1,000 feet (330 meters). The two photos below I took as I was crossing the Ohio river on foot. On the left is a large cargo ship still transporting coal. There were plenty of recreational boats such as the guys on the lower right enjoying the nice summer weather! 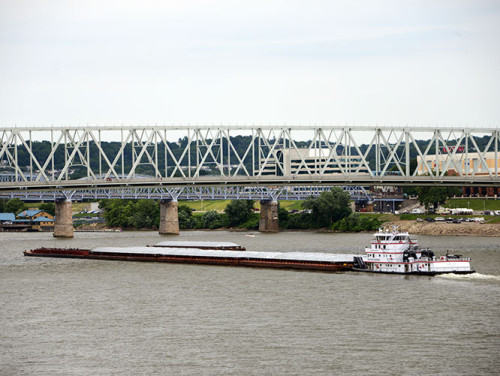 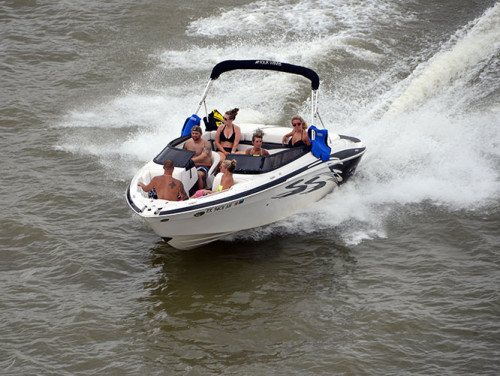 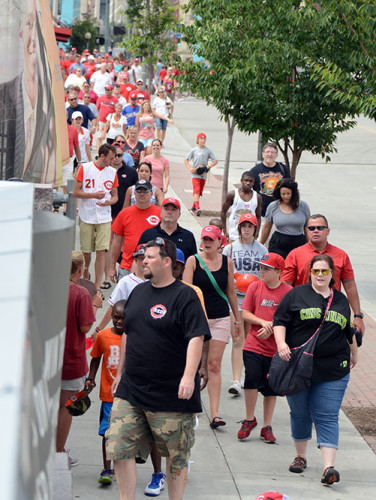 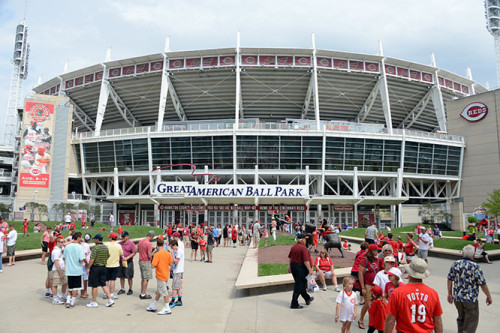 As soon as I crossed into the city, I came across this baseball stadium. Not just in Cincinnati, but all of the major cities in Ohio seemed to be very passionate about baseball. When I visited during the summer, it seemed that there was always a baseball game going on. I got to the stadium just as a game was ending in Cincinnati. On the left is a stream of fans leaving the Great American Ball Park, home of the Reds. The Reds have actually been around for a while, they were established in 1881 and have played continuously ever since in Cincinnati! 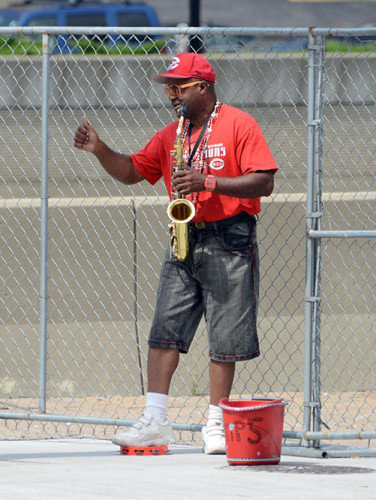 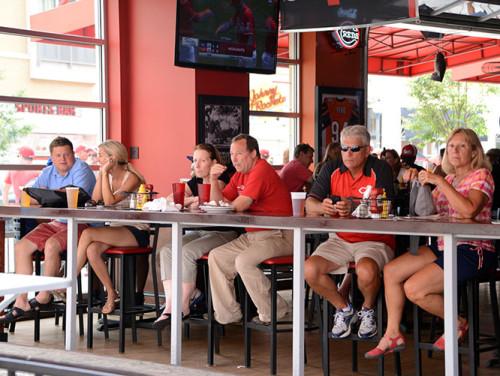 Immediately outside the stadium are lots of restaurants and bars. Cincinnati didn’t seem to have as good as a restaurant and nightlife area as Columbus and Cleveland did, but there were still plenty of places to choose from. Above is a man playing some baseball tunes on his saxophone and people having drinks at a restaurant after the Reds game had just finished. 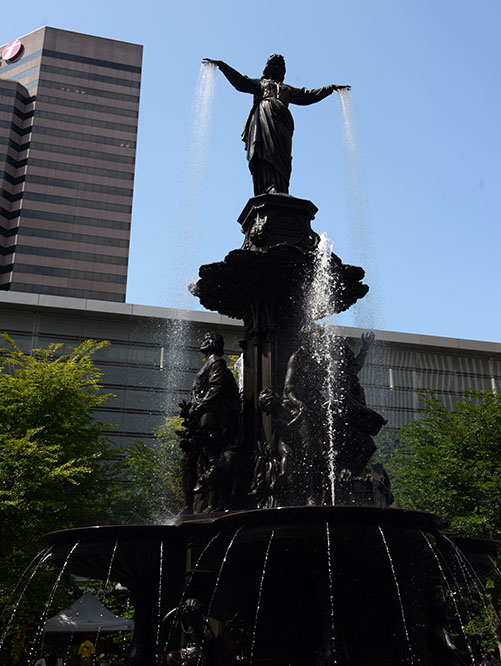 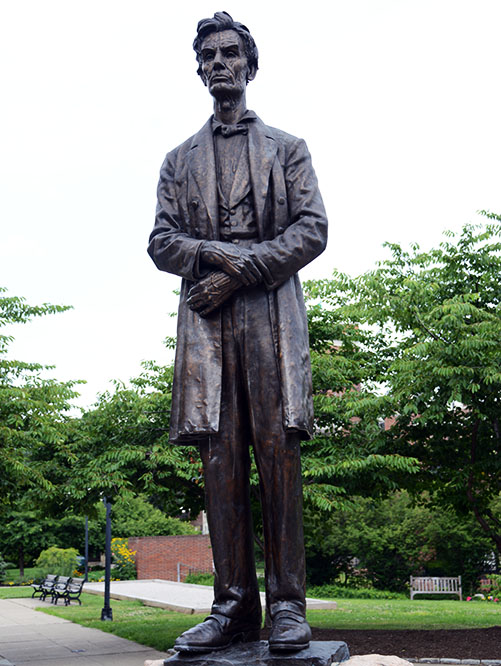 Probably the best place to find places to go out to for dinner and night life is around Fountain Square. This is really the heart of Cincinnati, and Fountain Square is often home to live music, events and festivals throughout the year. When I visited there was a small band playing live music and some people sitting outside enjoying lunch. On the left is a photo of the fountain in the center of the square. This right hand photo was a random statue I saw of Lincoln in the city. The statue is different from most other statue’s I’ve seen of Lincoln since he looks much younger in the photo and very humble. 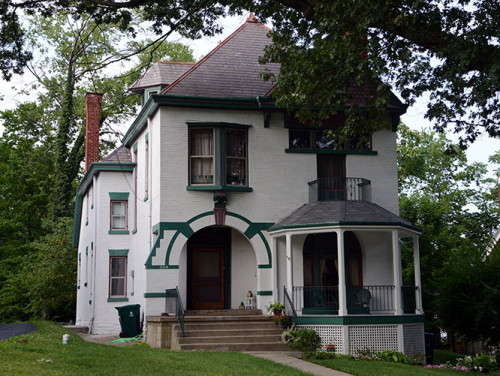 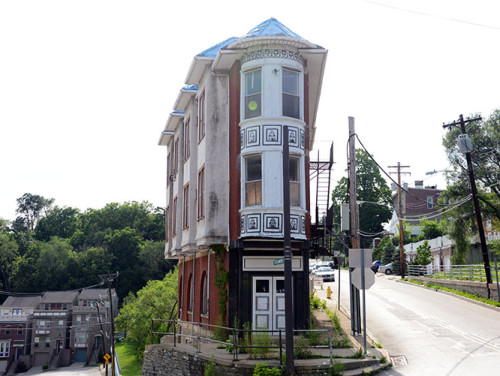 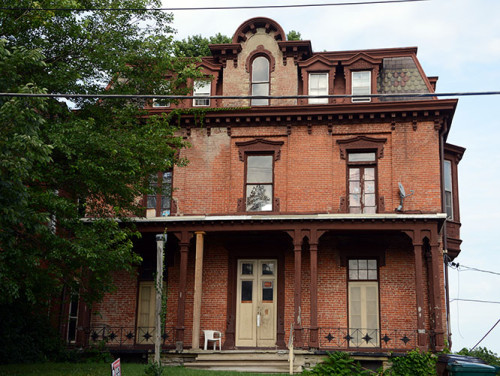 Something I really liked about Cincinnati where the random houses across the different neighborhoods. The houses on the outer left and outer right above look very different from each other. My architecture is pretty much non-exist so I’m unable to point out the types of designs. I did see a sign in this one neighborhood that actually labeled the styles of some of the homes built there. One of my favorites of course was this slender home built right between two intersections. I’m not sure if anyone actually lives in there, but I’d love to see what the inside of the house looks like! The photos below were from a more run down neighborhood that I passed through. I actually passed by some big party that was taking place on a side street in this neighborhood. Some people had their cars parked in the middle of the road and when they saw me they apologized several times and ran over to move it. I seriously got the vibe that I could have asked to join their party and they would have welcomed me, maybe I should have! 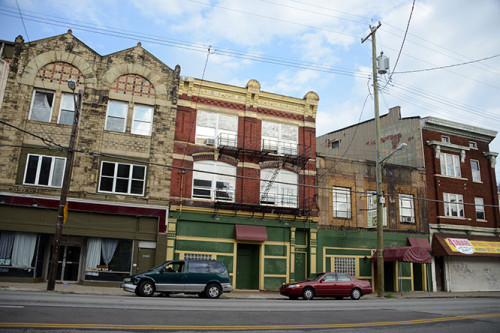 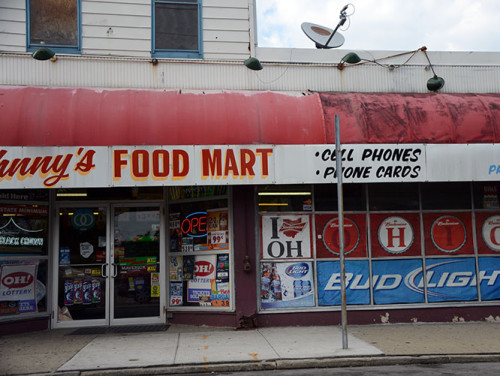 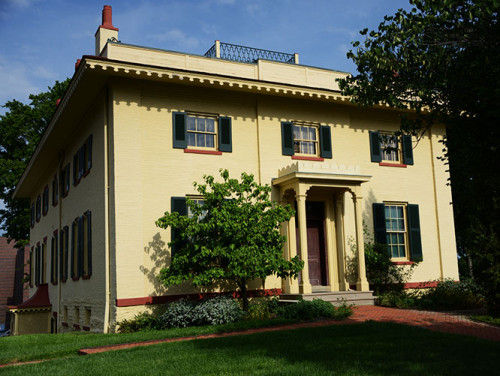 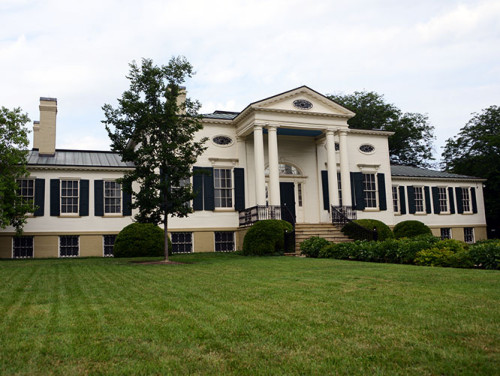 Two of the nice houses I posted earlier where from the Mount Auburn neighborhood in Cincinnati. In the earlier 1800’s, this neighborhood was where the rich lived. It was close and convenient to the city center, but far enough away to avoid the congestion and dirtiness of downtown. Also in this neighborhood is this home on the left, where president William Taft was born and spent most of his youth and early adulthood. I wasn’t sure of the other styles of architecture, but I know for sure that this home is Greek Revival. Both these places above where closed by the time I reached them, but on the right is the Taft Museum of Art. Some close relatives of Taft lived here, and it’s also the site of where the former president accepted his presidential nomination. Today the mansion serves as an art museum, home to a wide range of paintings, sculptures, and other art work. 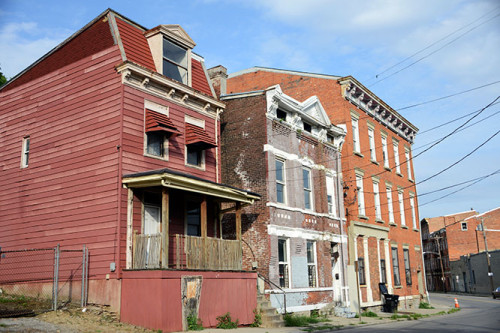 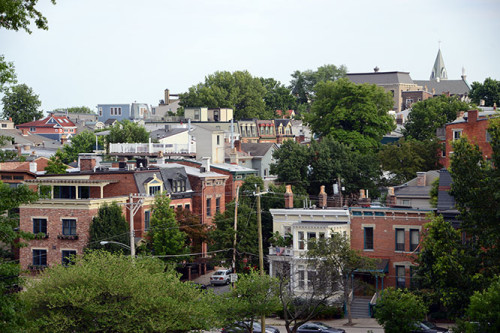 On the left is a shot from a random neighborhood in Cincinnati, but on the right is the famous neighborhood is Mt Adams. Mt Adams is a nice neighborhood but it’s mostly famous for having the city’s best park. Eden park is home to several famous landmarks, museums and overs great views of the city. While I drove to the park I came across this deer on the left. On the lower right is the Spring House Gazebo which sits right in front of Mirror Lake. 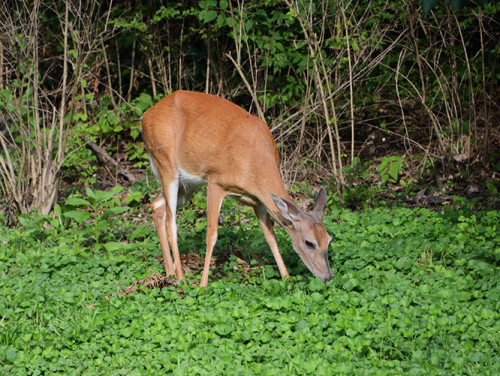 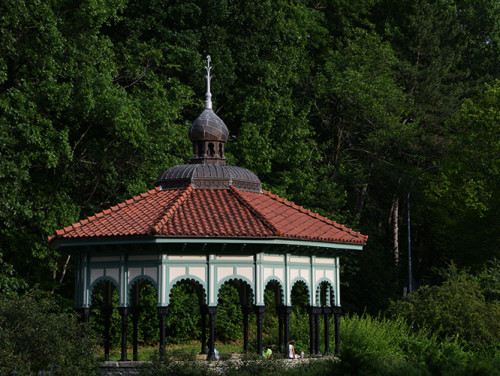 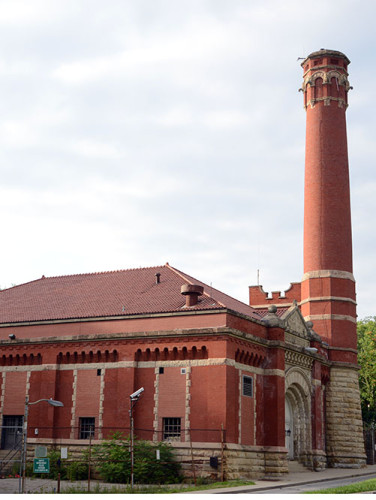 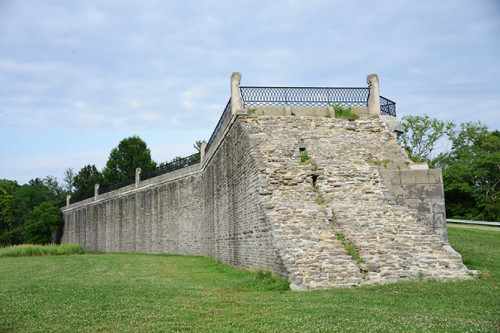 There’s really a lot going on in Eden Park. I actually wish I took more photographs here to share all that the park has to offer. The last two photos I have of Eden Park are these historic buildings above. The Station No. 7 was built in the late 1800’s as a way to pump drinking water for Cincinnati. Several buildings like this still remain preserved. A large part of Eden Park was once a giant reservoir until more modern means came along to bring water to the city. The remains you see above was actually part of the wall of the old reservoir and was built in the early 1800’s. I didn’t realize it at the time, but the wall is actually popular for rock climbers! Next time I visit I’ll go to the Cincinnati Art Museum, and the Krohn Conservatory which are both in Eden Park as well.