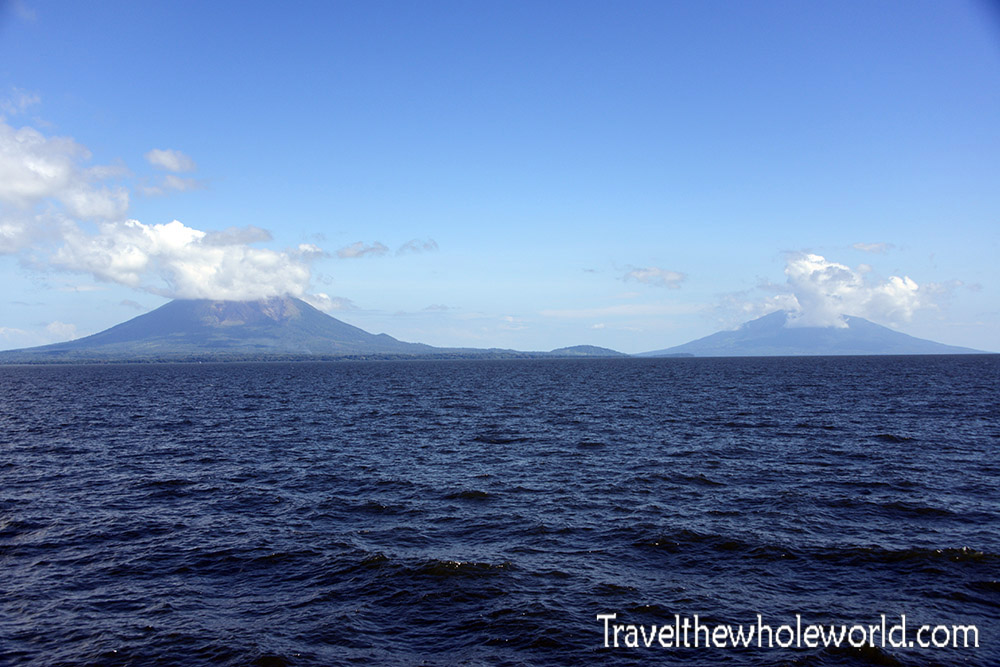 It’s difficult to believe, but the tiny country of Nicaragua is home to one of the largest freshwater lakes in the world! Lake Nicaragua is the 9th largest freshwater lake to be exact, and also falls in the top 20 of the world’s largest lakes of any kind. Even though it’s freshwater, the lake is home to lots of exotic animals, even has bull sharks! Within the lake is the famous Ometepe Island, a highlight of Nicaragau. Ometepe dominated by two large volcanoes. It’s possible to fly directly into Ometepe, but the majority of people visit it by taking a one hour ferry from the mainland . The photos above show a view from the ferry, where you can see their two large volcanoes. Below is a photograph of our fearless captain. 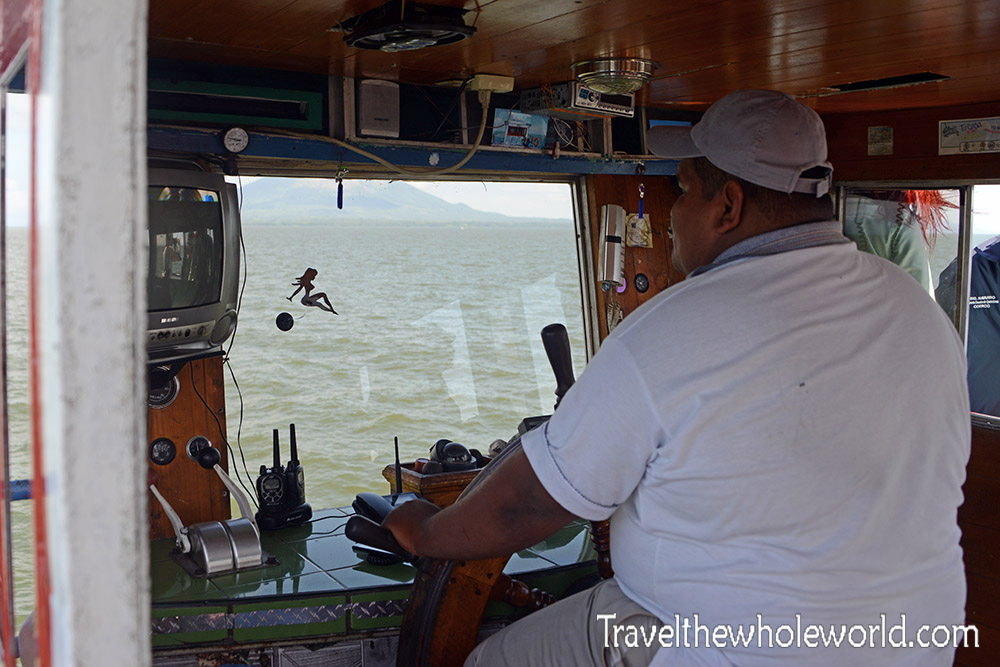 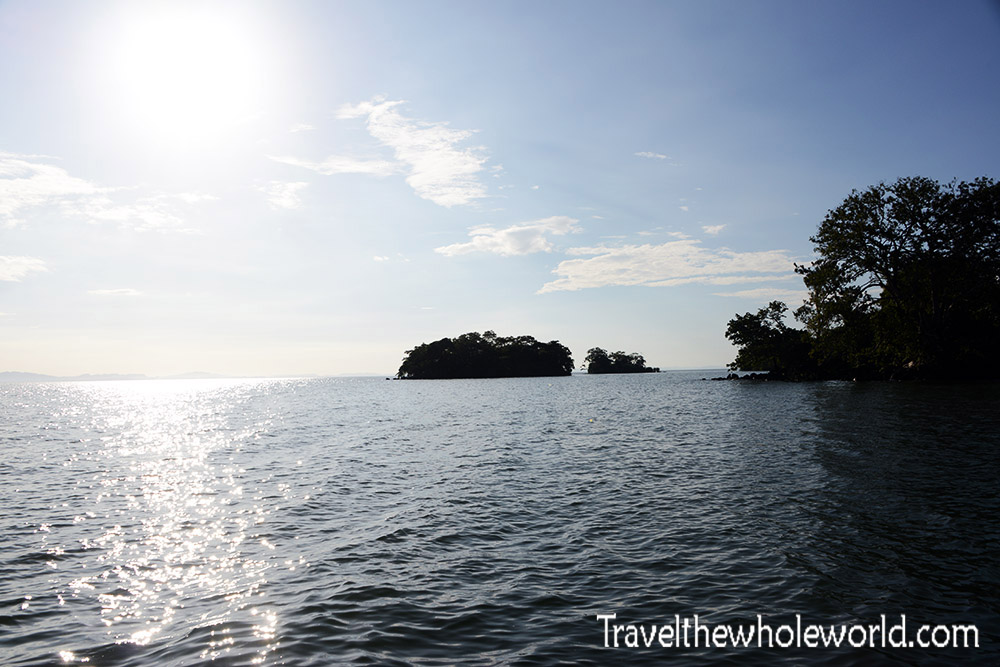 Ometepe is just over 100 square miles (250 square kilometers) with its longest width being only 20 miles (31 kilometers). At normal highway speeds in Europe or USA, you could get from one end of the island to the other in just over 15 minutes. With Ometepe’s difficult terrain and nasty roads, it can take up to two hours to get from two different places! Off the shores of Ometepe are several smaller islands like these photographed above. The islands above are called Monkey Islands. In the photograph below, I caught a comorant hunting just off the shore. 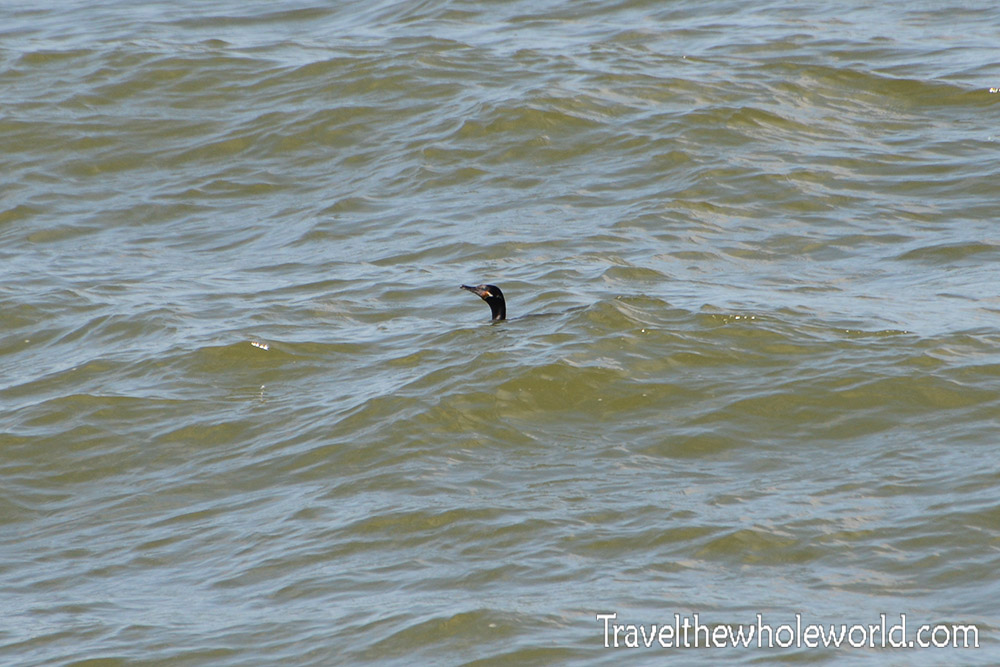 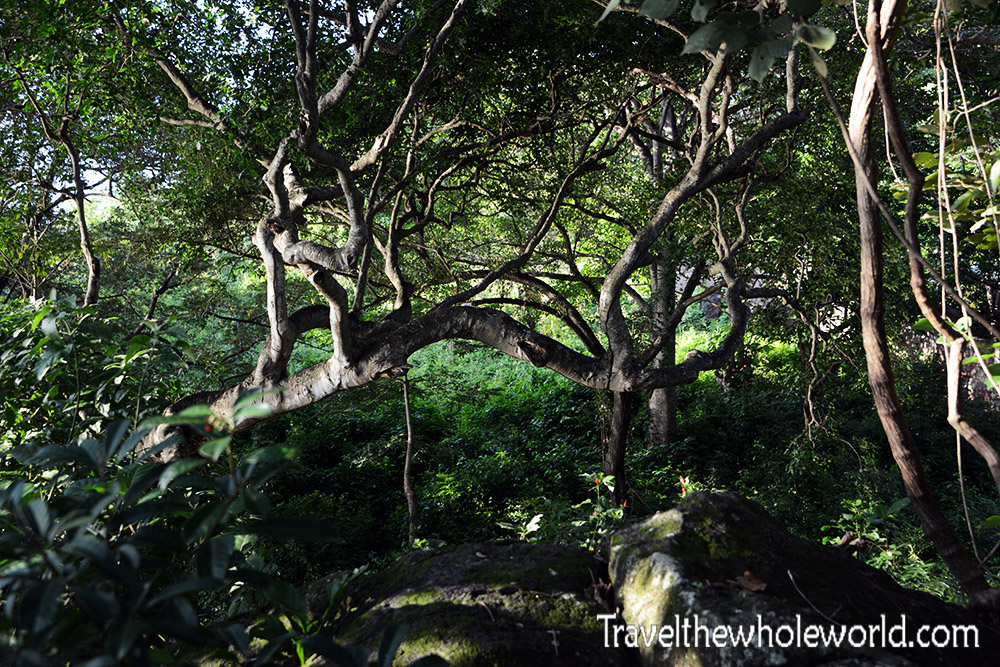 If you’re expecting nothing but beaches around the island then you’re a bit off. Most of the shore is lined with dense jungle. This photograph above pretty much was taken right from the waterline! 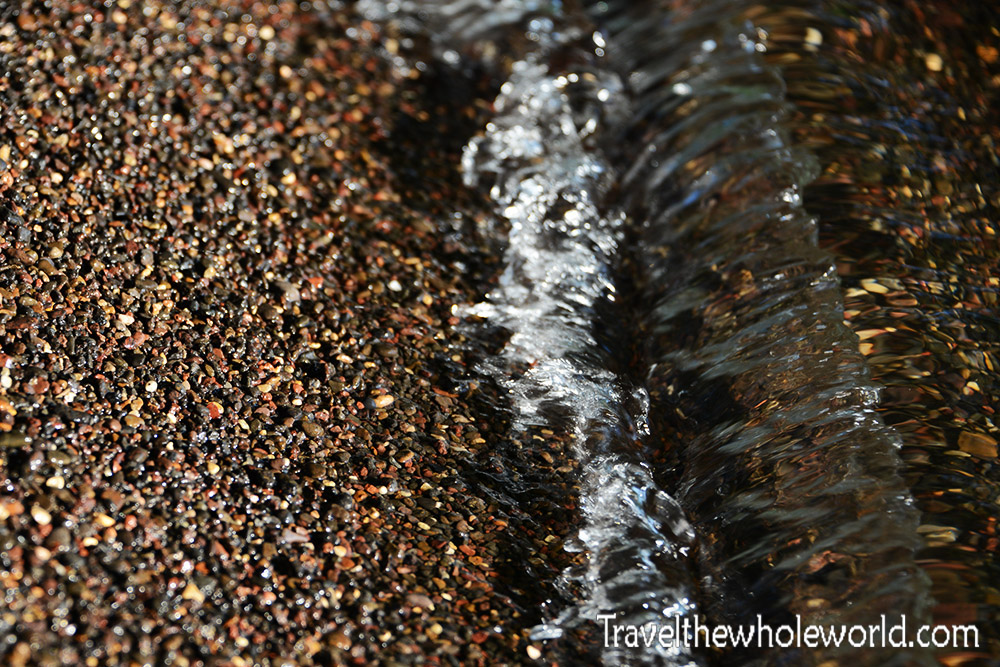 There are still a few beaches to choose from where you can get a good swim however. With my trip to Corn Island in the Caribbean only a few days after Ometepe, I decided to skip swimming and do other things. The water here wasn’t that appealing to me anyway since it was mostly murky. The shores are still beautiful though. If you can make it through the brush you’ll find some of the coast covered with beautiful tiny pebbles. 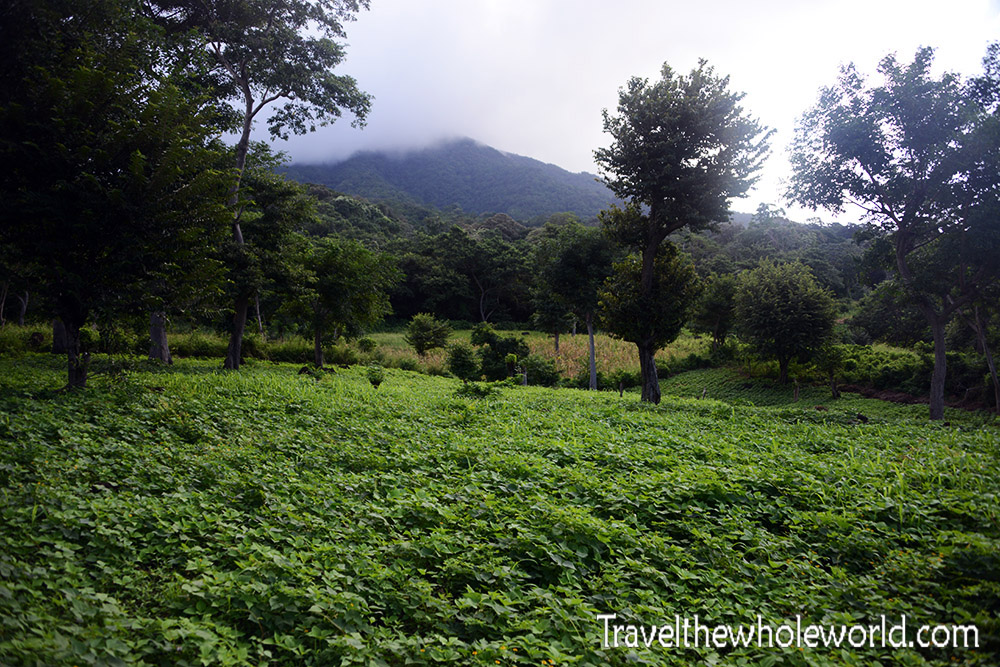 While Ometepe might sound tiny, there is actually a reasonably sized town located on the western part of the island by the name of Moyogalpa. This is the island’s main port, but another newer port exists a few kilometers to the southeast. Both of these are where you’ll find the majority of all the hotels and infrastructure for rentals and activities. I ended up staying on the other half of the island by the Maderas volcano. This section of the island didn’t even have a good road, and you have to walk to most places or organize a transportation in advance to get around. There are a handful of places to stay here, but it’s a pretty rural part of the island. 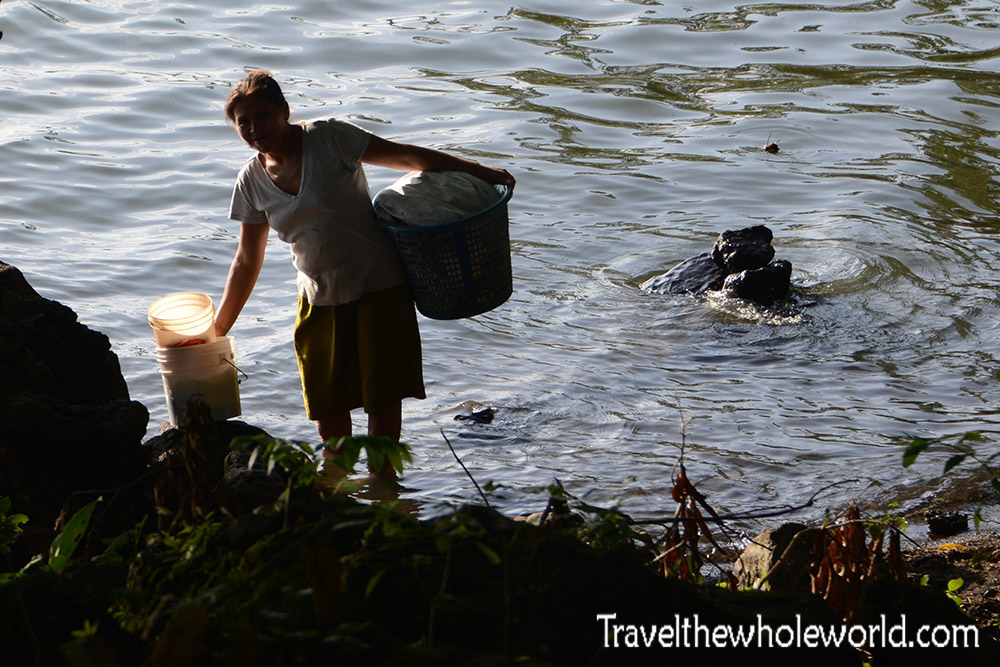 While walking along the shore I took these two photos above and below. With a giant source of freshwater, the lake can be used by locals for just about everything, from cooking and drinking, to laundry and even bathing. 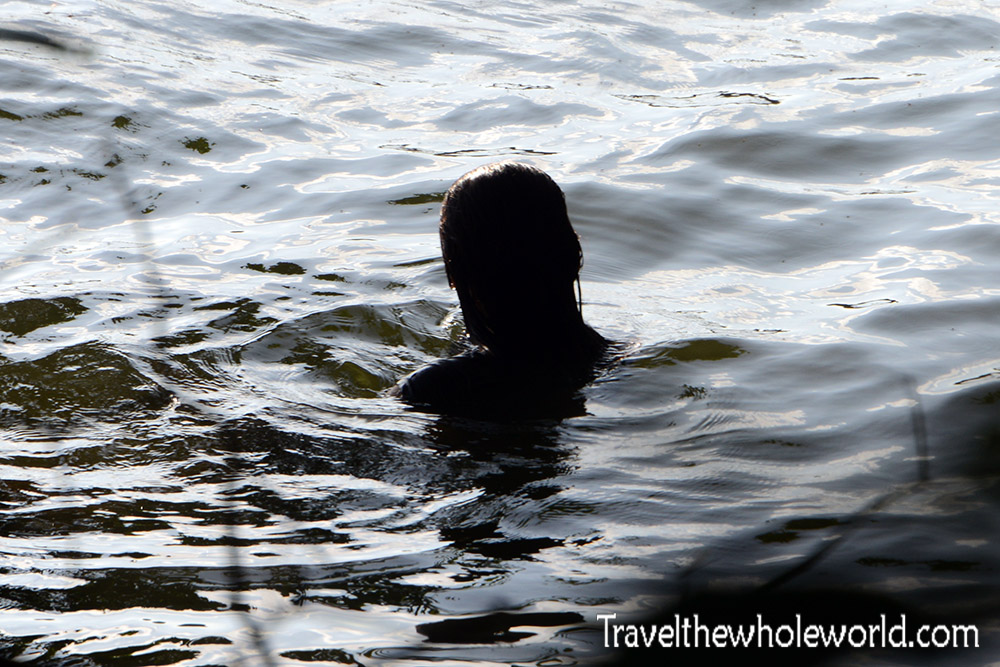 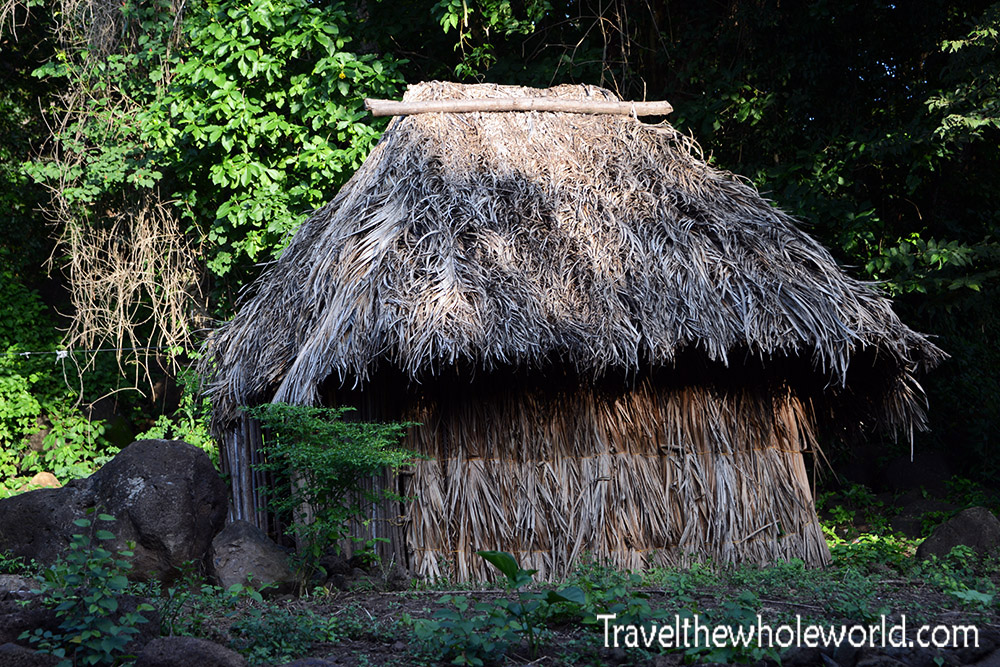 I was a bit surprised to see that some villagers that live here do so in primitive ways. Despite all the tourism to the island some still almost live off the land. The hut above shows someone’s humble home on Ometepe. 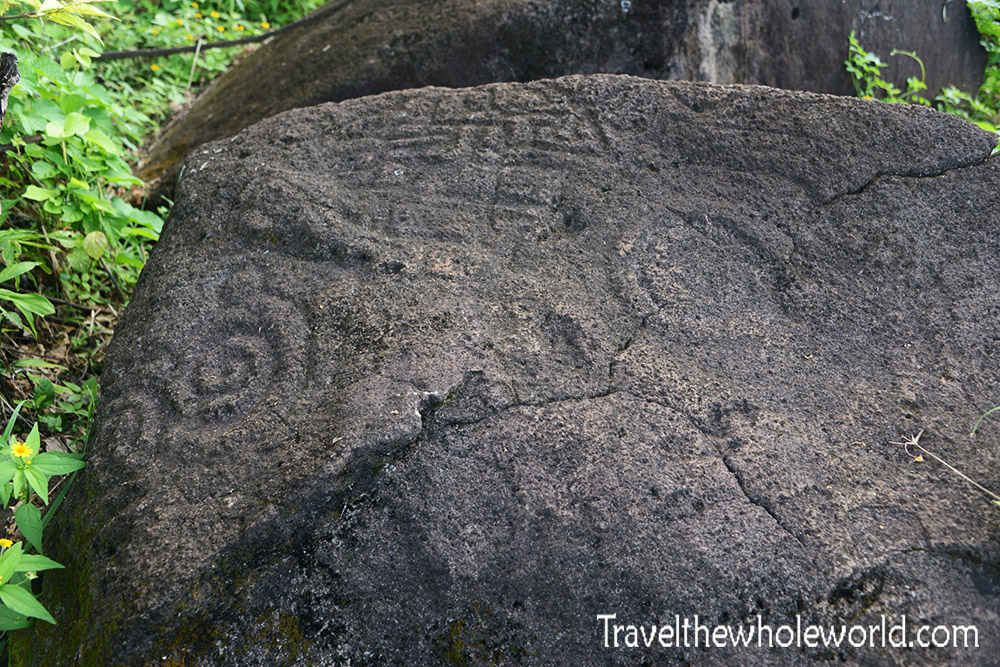 This is a photograph of one of many petroglyphs I came across. It’s estimated this island was first inhabited over 3,500 years ago, and the first natives left behind countless artifacts. 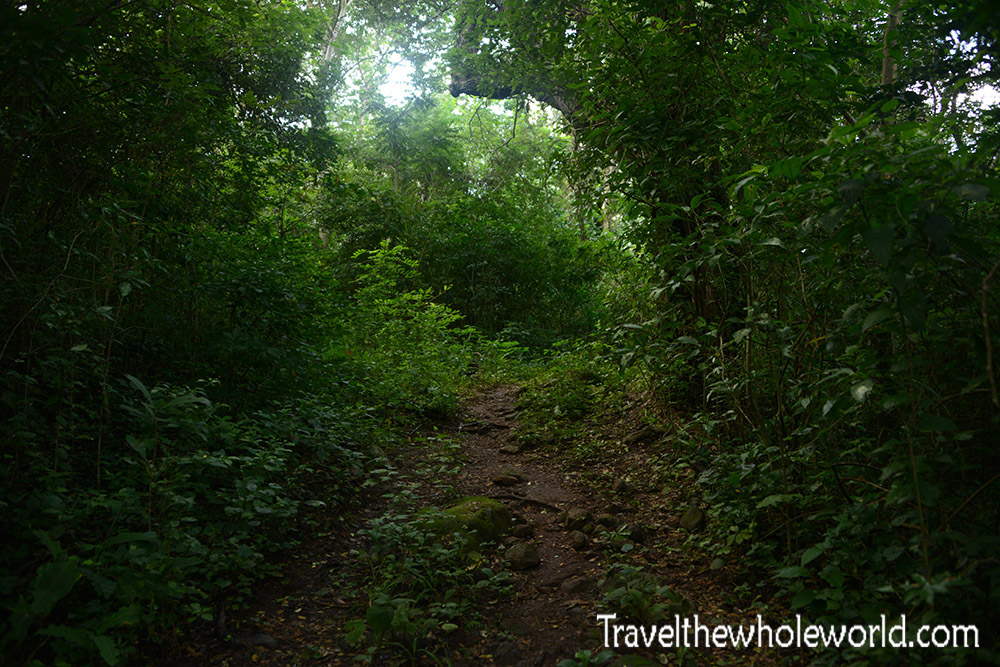 I took the photograph of the petroglyph during my hike up the top of the Maderas volcano. For me this proved to be the highlight of my visit to the island. I originally was intending to do the higher volcano called Concepcion, but I was told Maderas was more scenic and the fact that it was just a few minutes from where I was staying made it an easy pick. The trail beings passing through farmland before turning into thick rainforest. 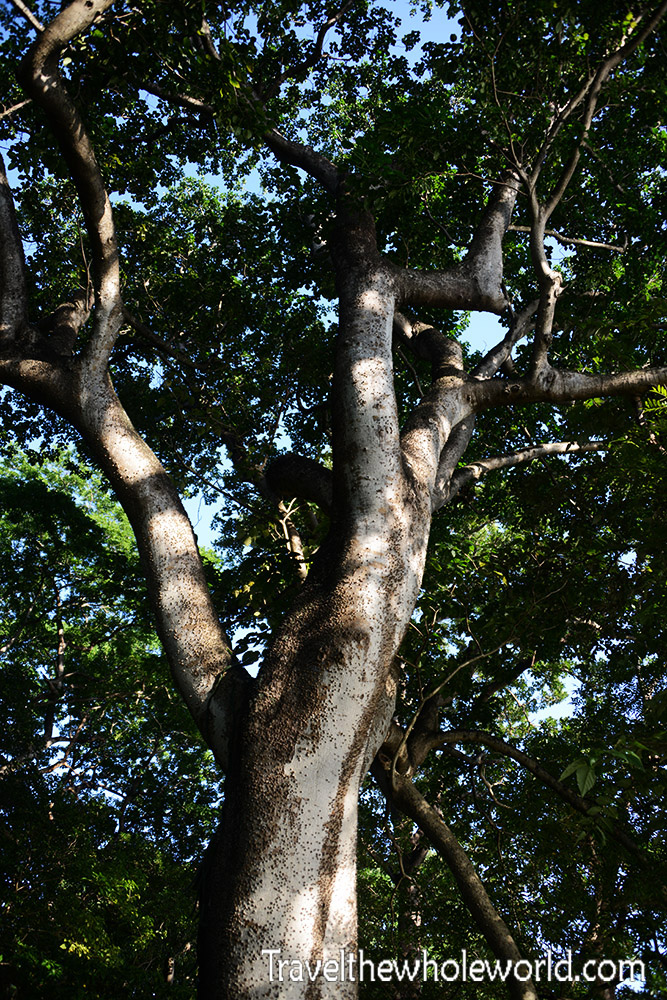 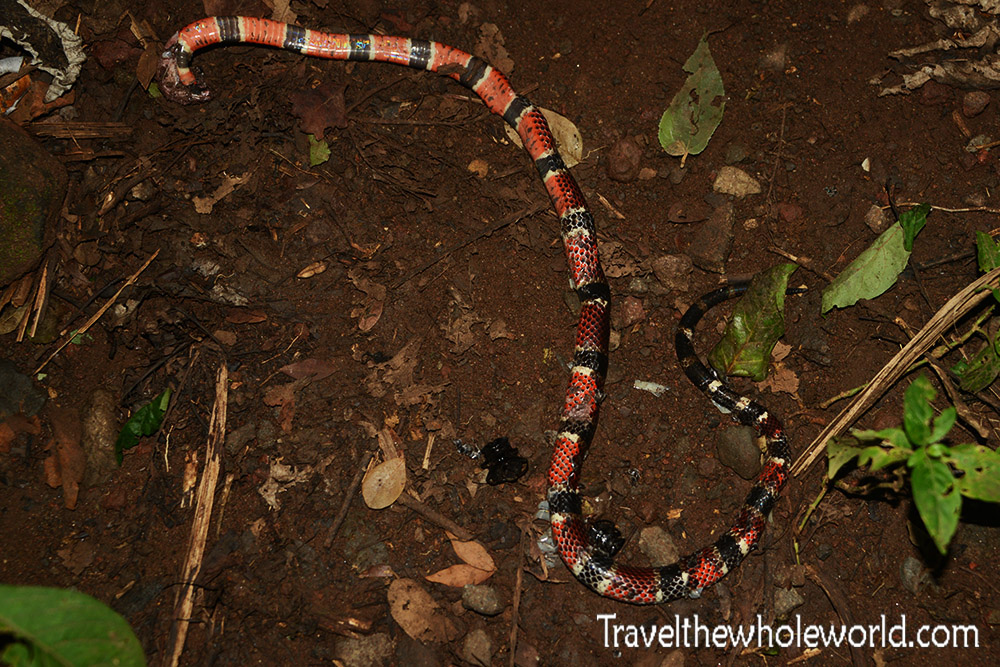 Most of the wildlife you’ll come across lives among the trees, such as monkeys and birds. There is plenty of wildlife on the ground of course, but the dense plants make them difficult to see. This highly poisonous coral snake was found dead on the trail and was probably trampled by a horse. Coral snakes are one of the most poisonous snakes you can find in the western hemisphere, but they are actually quite shy and will almost always run away before you can even see them. 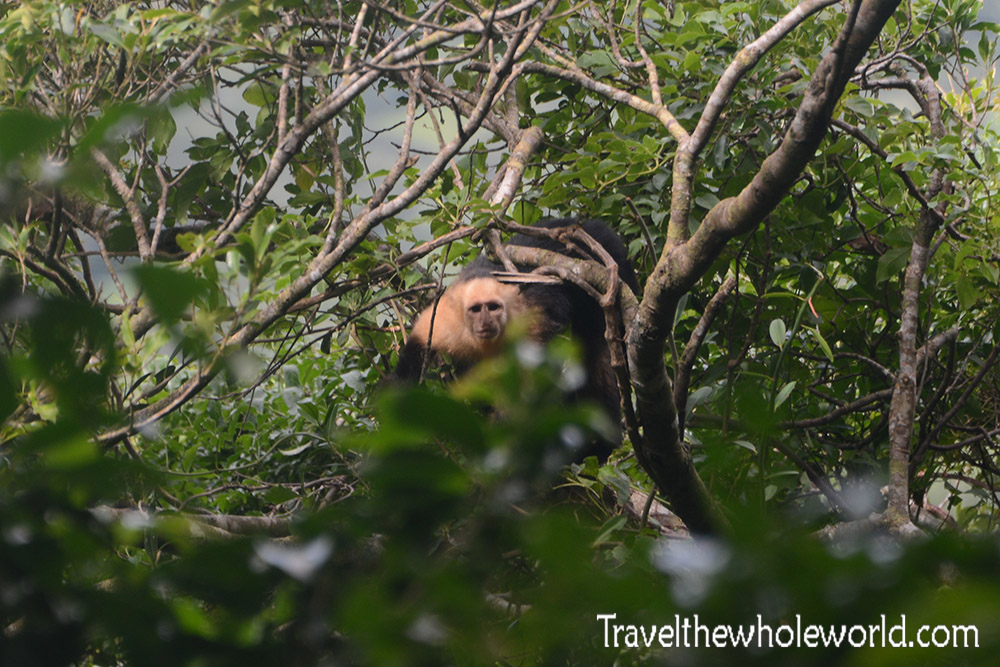 Up in the trees I saw several species of birds and monkeys. The treetops are also pretty dense, so these two photos are the only decent ones I got of any wildlife. I got lucky photographing this Capuchin monkey. I could see him in the trees but he was behind so much foliage there was no point to take any pictures. Just when I thought it’d be impossible to get a clear view of him, he actually walked out onto an exposed branch. 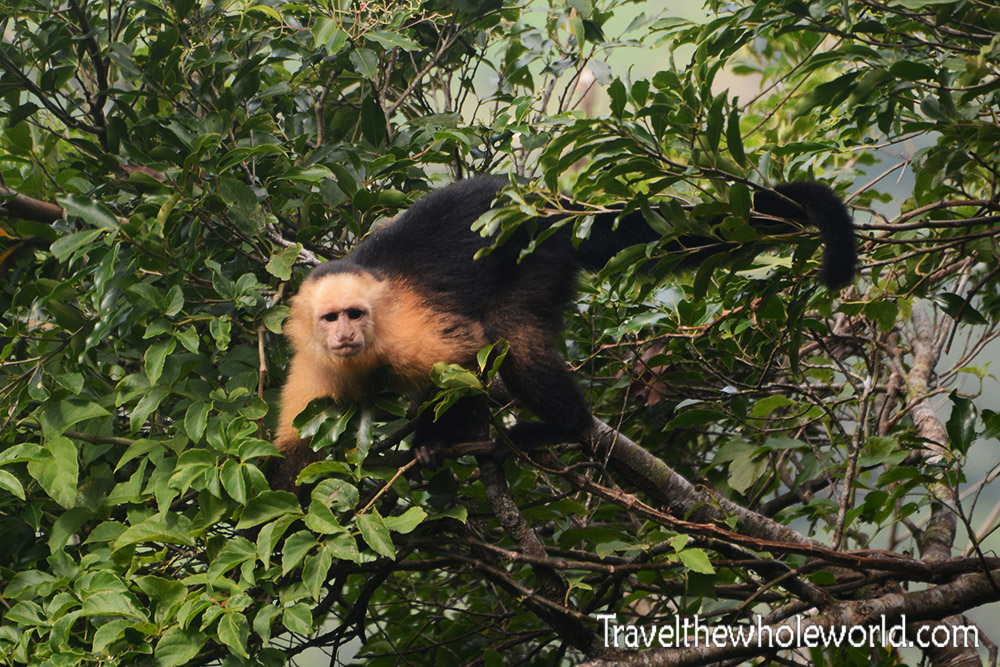 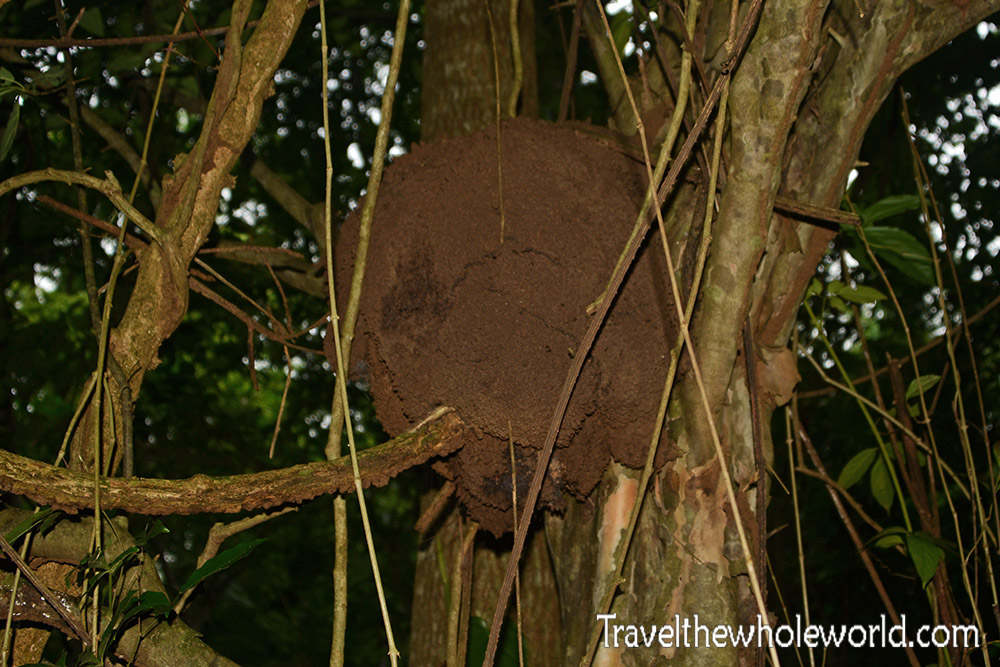 Photographing monkeys and birds; difficult! Dead snakes and termite mounds; not so much. I saw a few of these towards the end of the jungle trail. The termites seemed to like the border regions right before the cloud forest began. 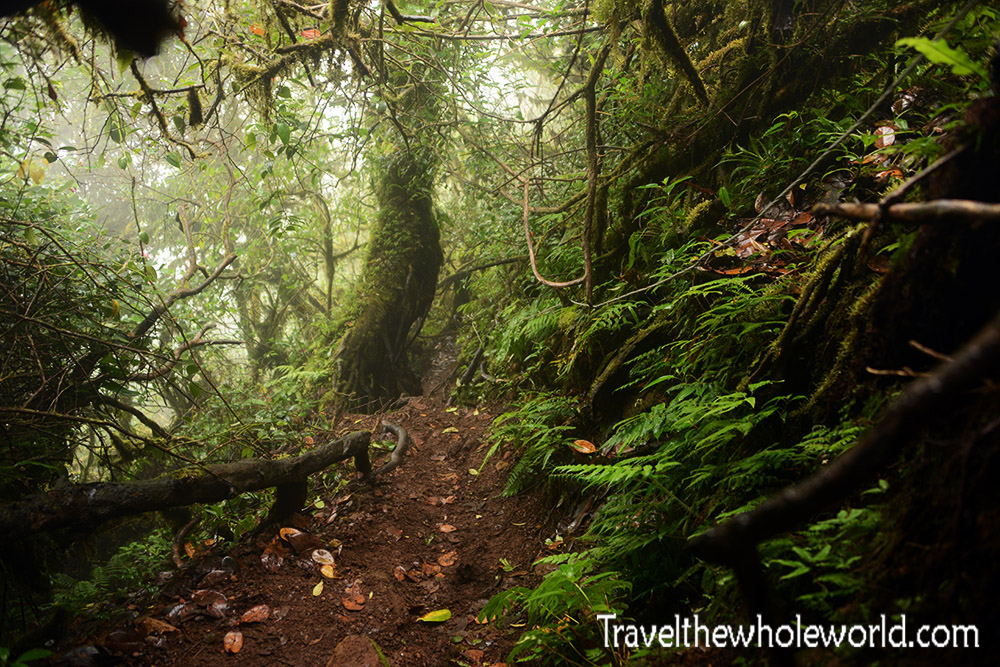 When you do actually enter the cloud forest, there is an immediate and distinct change in the vegetation. There’s a bit more light since the canopy is thinner. The trees are shorter, and you’ll start to see some moss. 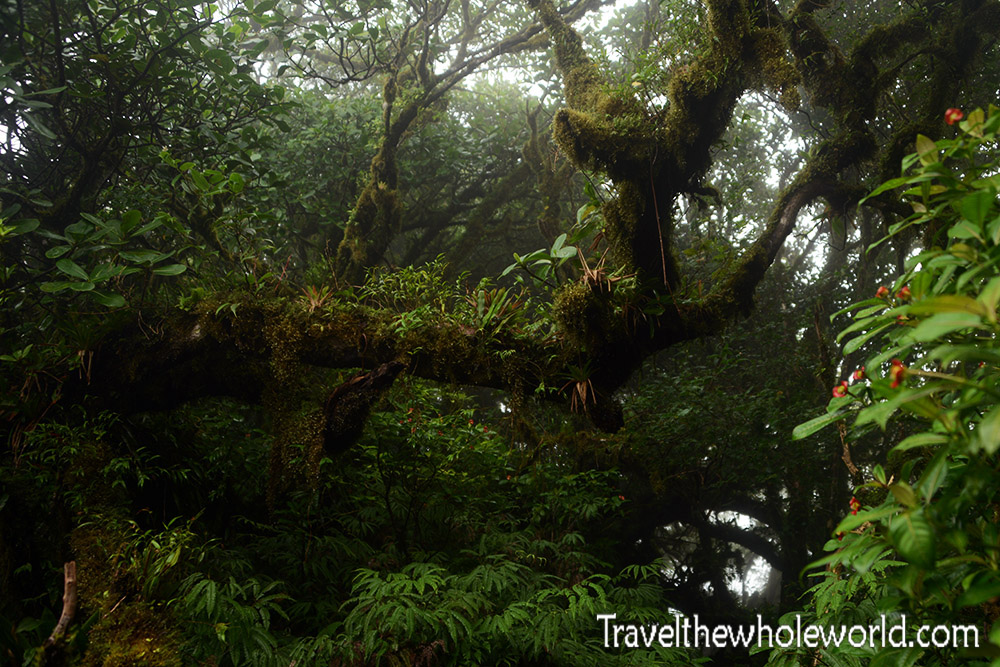 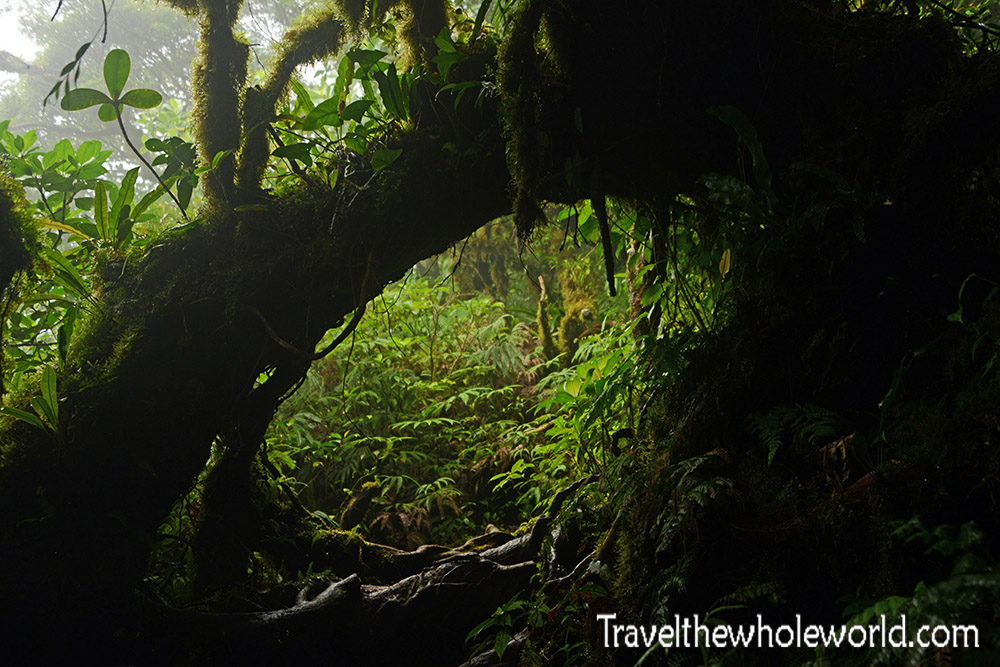 The cloud forest itself even has two distinct areas. At first it seemed to be more about ferns with occasional moss. As you climb higher the forest gets even wetter and then moss seems to cover everything. I was really surprised how steep the trail was in the cloud forest. Trails seriously don’t get much steeper than this, and it doesn’t let up until you’re close to the summit! 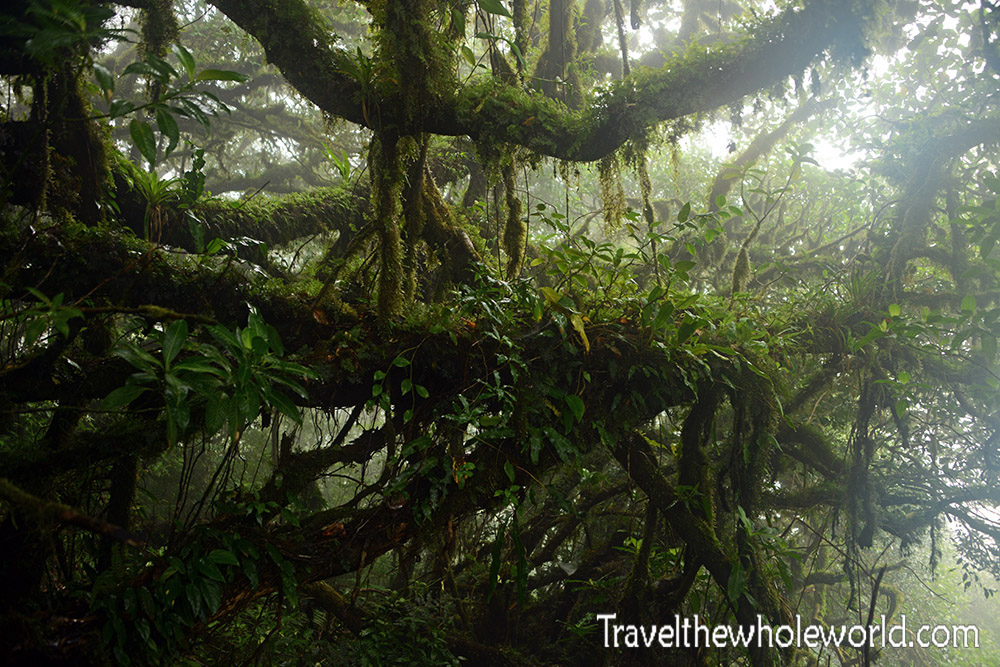 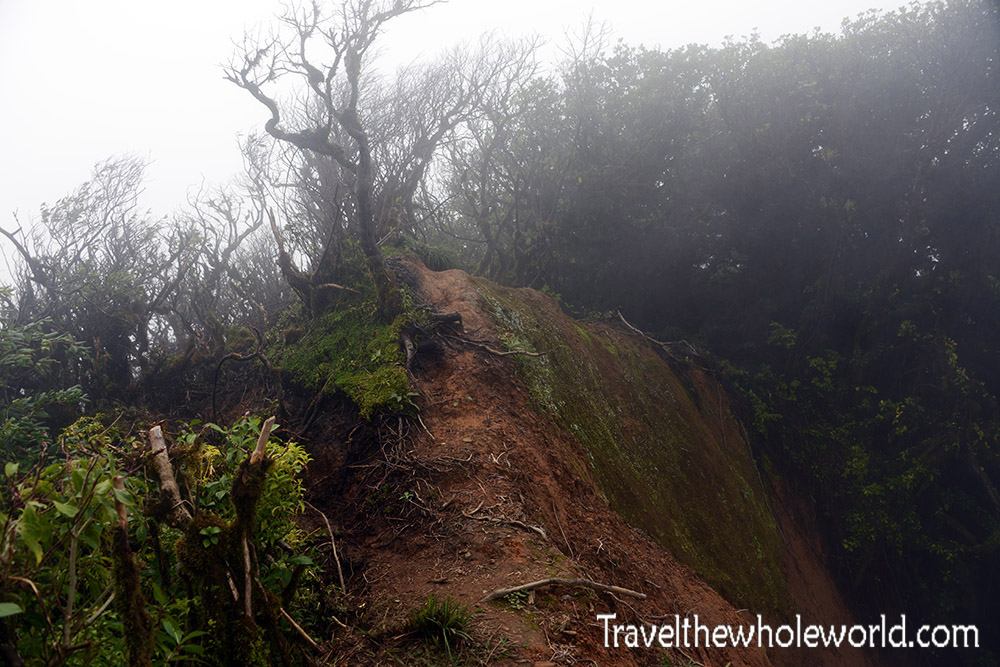 Sadly these photos above and below are all I got to see of the summit of the Maderas volcano. The photo below shows a very steep mudslide that disappeared into the clouds right at the summit, but other than that reaching the top was a bit anti-climatic! Because the foliage was so thick it didn’t even feel like I reached the top, but more of a random point before I turned around. This is because the top of the volcano is more of a ridge that extends for a few hundred meters out of view. 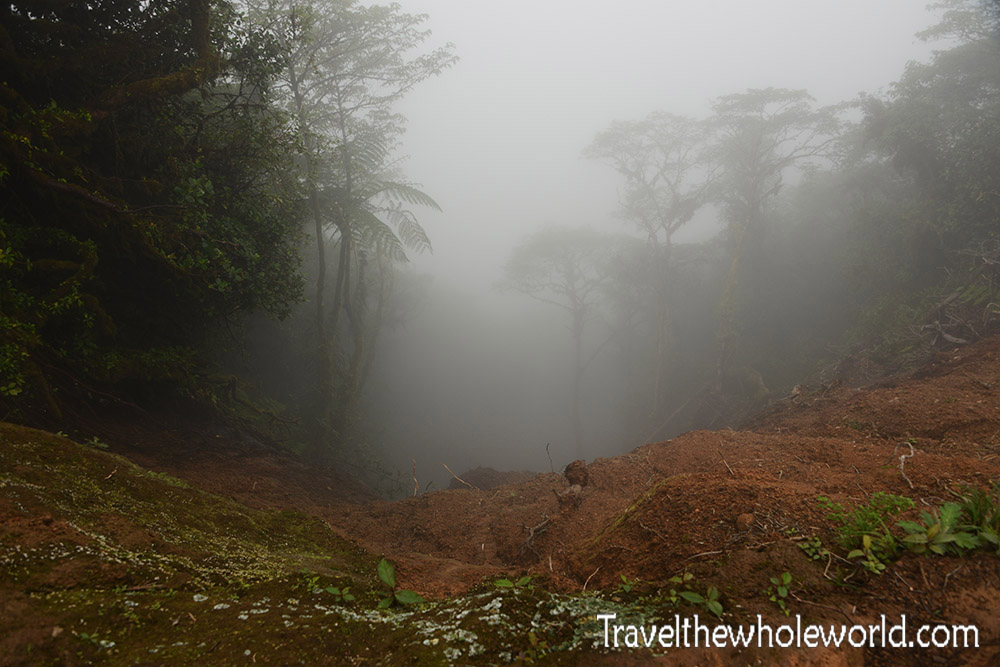 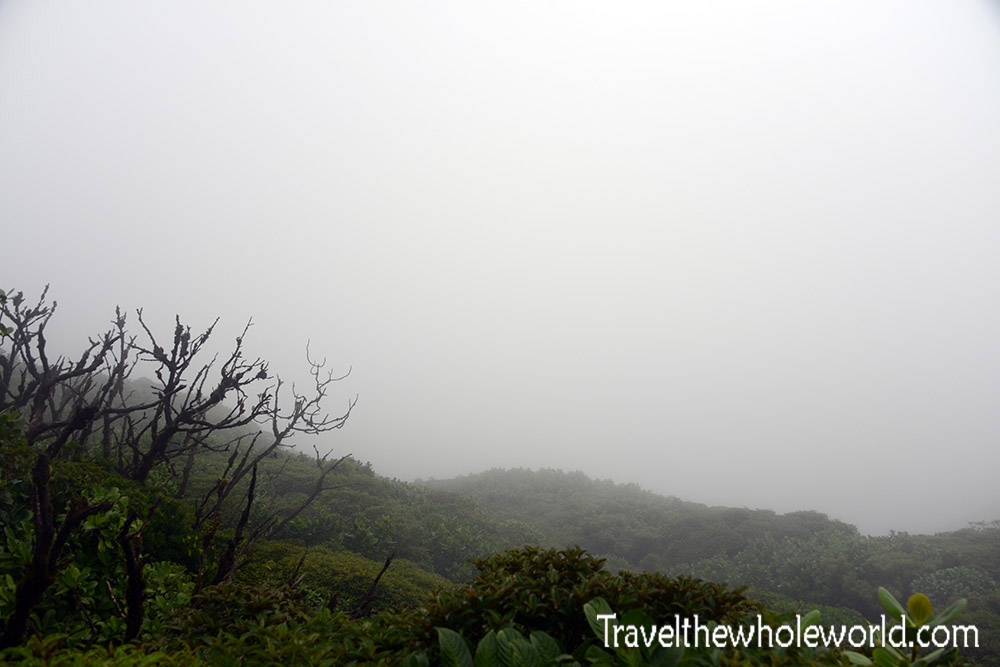 The lagoon on top of the volcano is hidden by the thick clouds. There is a trail that continues down to it, but it was taken away by another recent mudslide, so I didn’t even get to see the lagoon. The hike down from this summit is a big challenge because the terrain is so slippery and annoying. I had taken a longer trail up to the volcano and it took me less than three hours to summit, but about two hours to get back down. 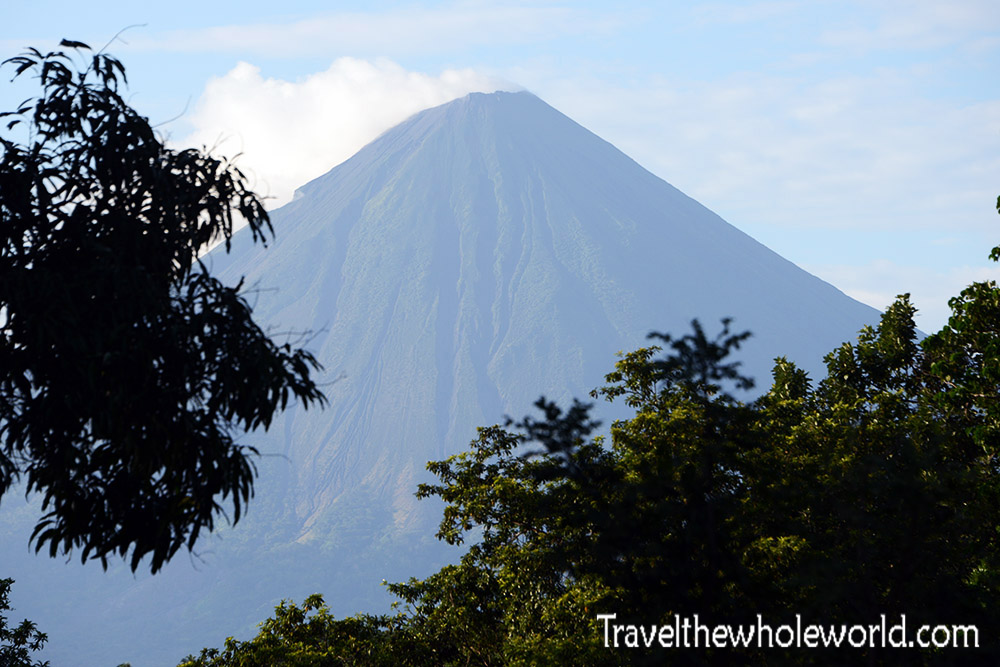 Once off the volcano I was able to enjoy my rewards at my hotel. I took a swim in their pool, got some more photos of Concepcion photographed above, and even saw one of the most beautiful sunsets of my life. This last photograph was taken right from my bungalow! 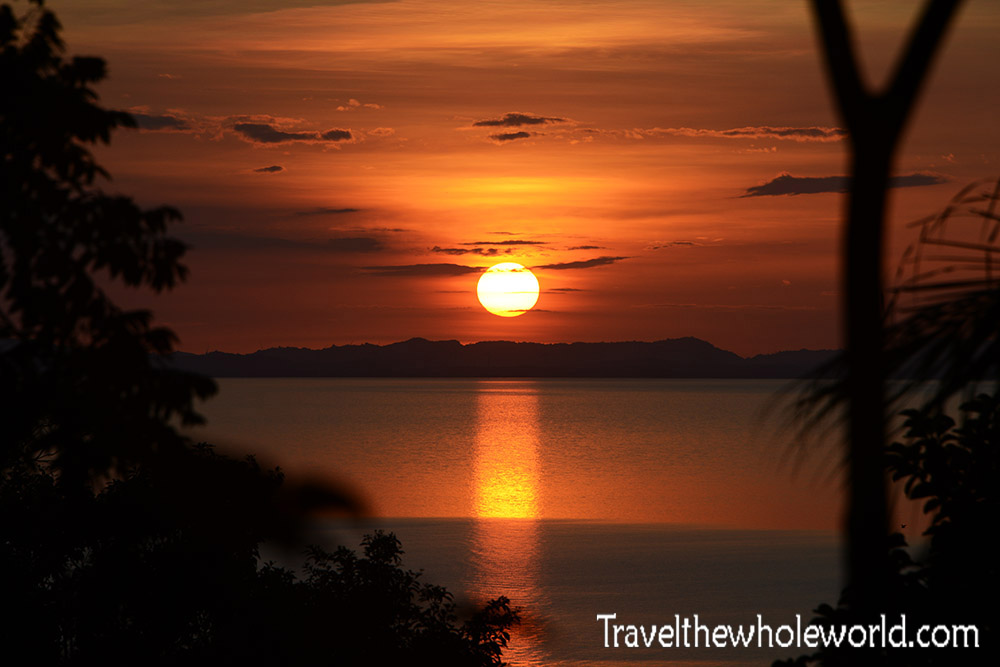