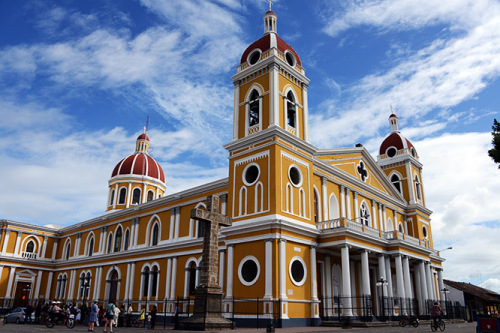 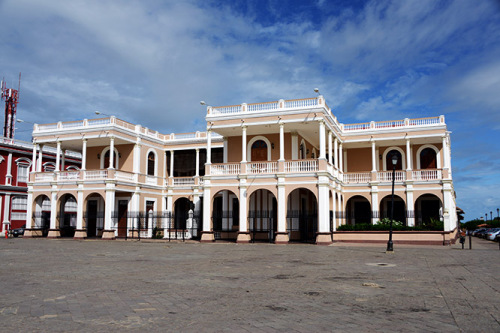 Granada is one of Nicaragua’s most important cities, maybe even the most important in some ways! The city was actually founded in 1529 by the Spanish, and is the oldest city in the Americas. Older cities exist in the Caribbean in places like the Dominican Republic or Puerto Rico, but Granada is the oldest on the mainland. The photos above show the heart of the city, Plaze de la Independencia which has the city’s main cathedral and colonial buildings. 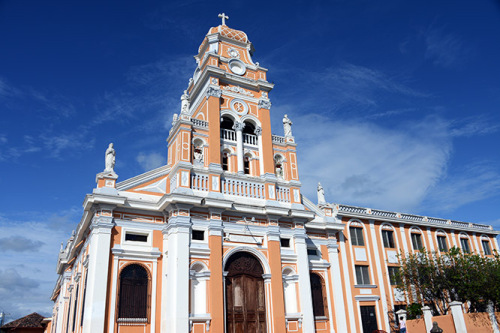 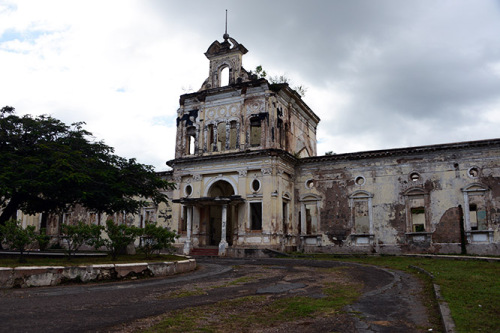 Granada is filled with half a dozen important cathedrals. The cathedral in Independence Plaza is by far the nicest, with this one here coming in at number two in my opinion. Some of the other cathedrals looked pretty beat up to be honest, and some I thought might even be abandoned! This photo on the upper right shows the remains of an abandoned Catholic hospital. I’m not sure the story behind it, other than foreigners like to say that it’s haunted while locals say it’s just like any other building! 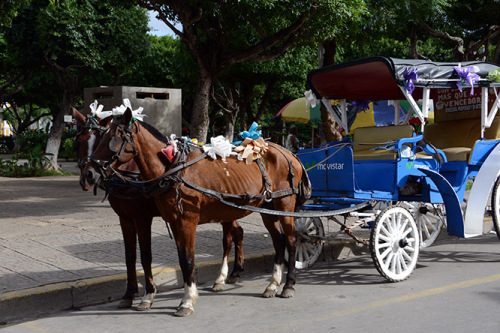 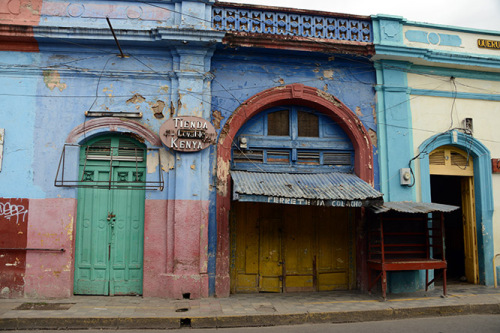 The central parts of Granada are pretty nice. This area is by far the cleanest and touristy part of the city. You’ll find the best restaurants and hotels, with plenty of taxis and horses and carriages. A block or two away from here things get pretty shabby. I took this photo on the way to the market photographed below which was only a few blocks away. In other parts of Granada, the buildings looked pretty similar. Despite their appearance though, Granada is a very friendly and safe city! You still need to use common since when visiting th market, but the chances of something happening to you are pretty low. These photos below were taken on a Saturday, but for some reason when I came back on Sunday it had so many people it was difficult to walk! 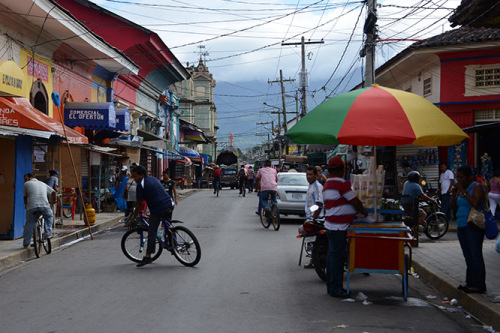 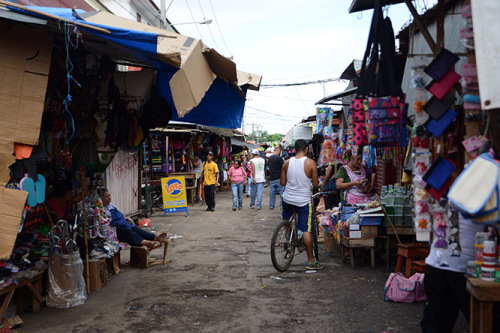 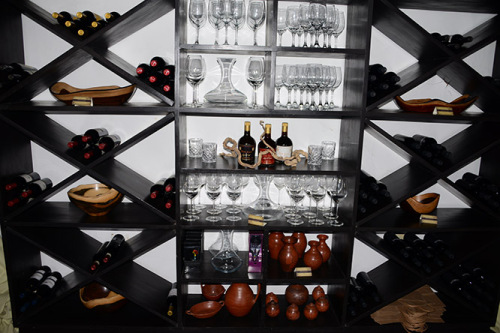 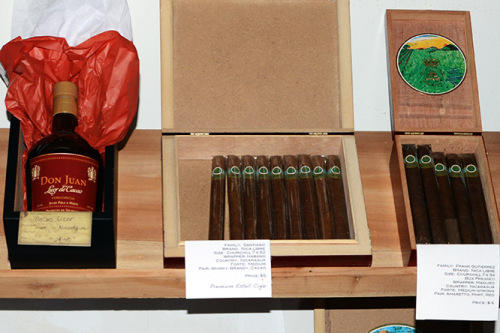 I walked around most parts of the center of the city and stumbled upon this cigar store. Until I stepped inside I didn’t realize that Nicaragua was famous for cigars, many of them on par with Cuban cigars! I don’t smoke myself, but figured I’d buy a few for others back home. I picked a few random ones and when they lady wrong me up it came to a total of $77 USD! I had thought it was 77 Nicaraguan Cordobas which would be about three American dollars. I apologized several times and had to put most of them back. $18 for a single cigar in a country where things are incredibly cheap seemed a bit high. On the flip side, 50 cents per cigar also seemed a little too good to be true! 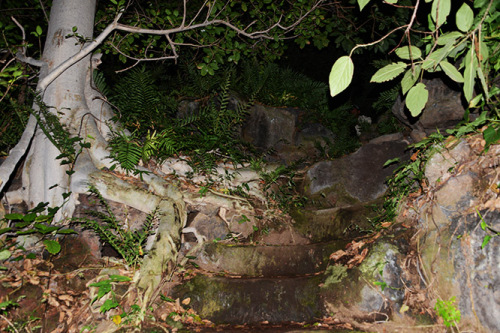 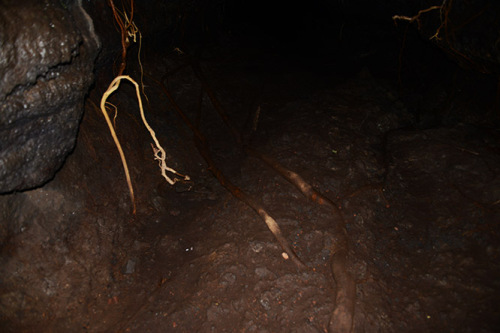 One of the most popular places to visit in Nicaragua is the Masaya volcano. The volcano is one of the most active in the world, and provides all kinds of outdoor and sightseeing activities. Although you can stay in the town of Masaya itself, the volcano is close enough that most people visit it from Granada. I choose to do a night hike, with the hopes of seeing lava in the crater lake. To be honest, there really wasn’t much hiking involved to my disappointment, but rather short treks here and there to different parts of the park. These photos above show the hike through the jungle to the entrance of one of the lava tubes. I had been inside lava tubes beore in Washington state, but unlike those these had some extremely long roots following the floor of the tube. You can see their starting point right outside the mouth of the lava tube, and follow them inside for literally hundreds of feet! 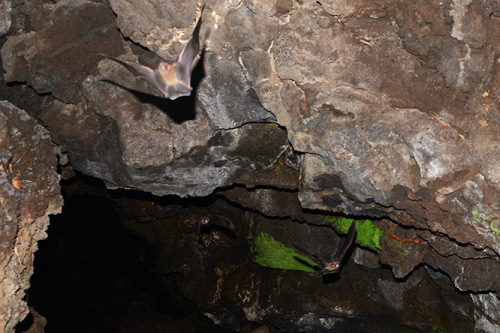 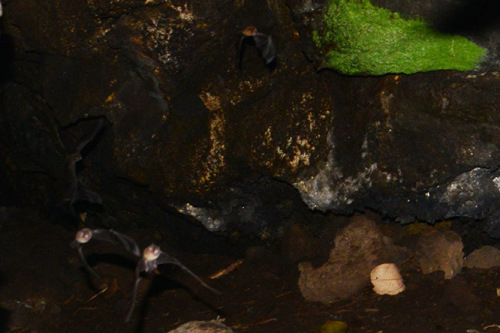 And if you’re worried about bats by the way, then you should be; around 45,000 live in the lava tubes. These photos above were taken from another lava tube that was only a few meters away from the one I entered, but in both of them you can see bats going in and out. Bats are rarely home when it’s dark, so if you enter the cave when it’s night you’ll only see a handful coming and going. 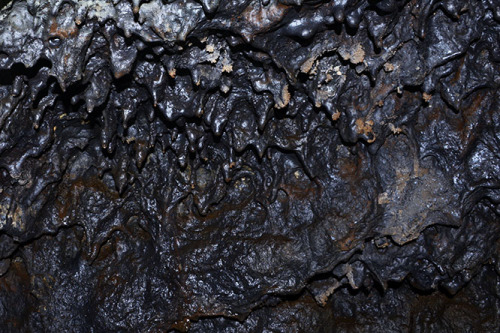 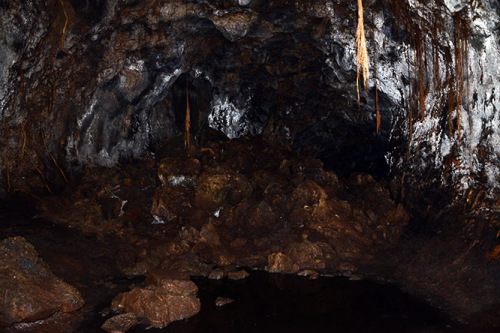 After a short hike we came to this section of the lava tube that was nearly sealed shut with large lava rocks. This area was deep enough that there is no natural light reaching this area, so if you turned off your flashlights you’ll be in true darkness, to which your eyes will never adjust. The inside of the volcano tube had some interesting stalactites. Instead of the huge cream to brown looking ones I’m used to seeing in caves, these were smooth and black. The photo on the upper right shows our stopping point in the lava tube. You could easily climb over this and continue on the hike for another full kilometer! 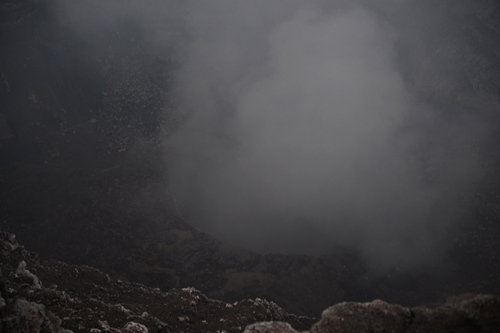 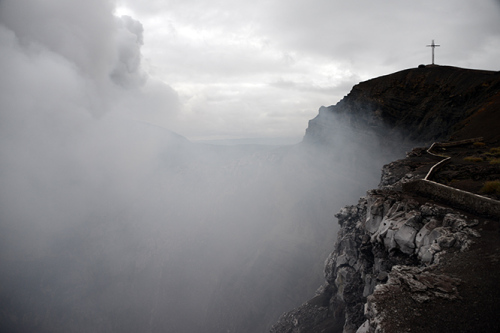 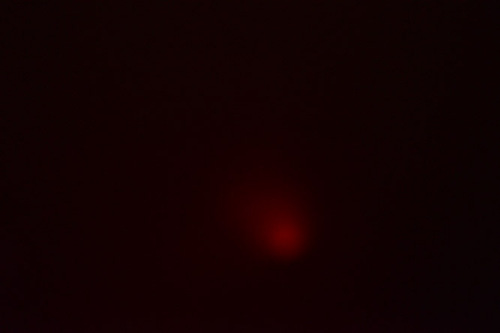 On the way to the summit of Vulcan Masaya is a smaller volcano called Nindirí. This opening spews a massive amount of toxic sulfur dioxide clouds from the summit. From a distance they are actually hard to distinguish from normal clouds in the sky, but as you get closer you can see and smell the difference! The first Spaniards who visited the volcano in the 1500’s believed that the inside of the volcano was filled with molten gold. You can imagine their disappointment when they found out there was no gold inside, but only a doorway to hell, according to an accompanying priest. For this reason, it has been called “La Boca del Infierno” or “The Mouth of Hell” in English for hundreds of years. The natives in the area had believed the volcano to be a god, to whom they had to make sacrifices in order to keep happy. Many people were cast down into the pit in order to put a smile on their god’s face and prevent any massive eruptions. When the Spanish arrived they stopped this process and put a large cross by the summit known as Bobadilla Cross. After visiting Boca del Infierno, I headed up to the true summit of the Masaya volcano. I was a bit disappointed by the views because the toxic clouds had consumed the view point and the lava below was difficult to see. We actually had to wear gas masks as we approached the summit and looked inside. This photo on the right was the best I was able to get, but you can clearly see the lava glowing inside.