Hiking the Khumbu Valley is one of the best high altitude hikes in the world. I did it on my way to Everest Base Camp where I later spent nearly two months climbing the mountain. The reason the Everest Base Camp Trek is such a beautiful hike is because of all the cultural encounters of the Sherpa people, the Buddhist monks, and not to mention the amazing mountains of the Himalayas and changing environments as you get higher. I began my hike in early April and left in late May. Even in April it was pretty warm starting off on the hike, and I was able to get away with wearing shorts and using a camel back almost all the way to Base Camp! 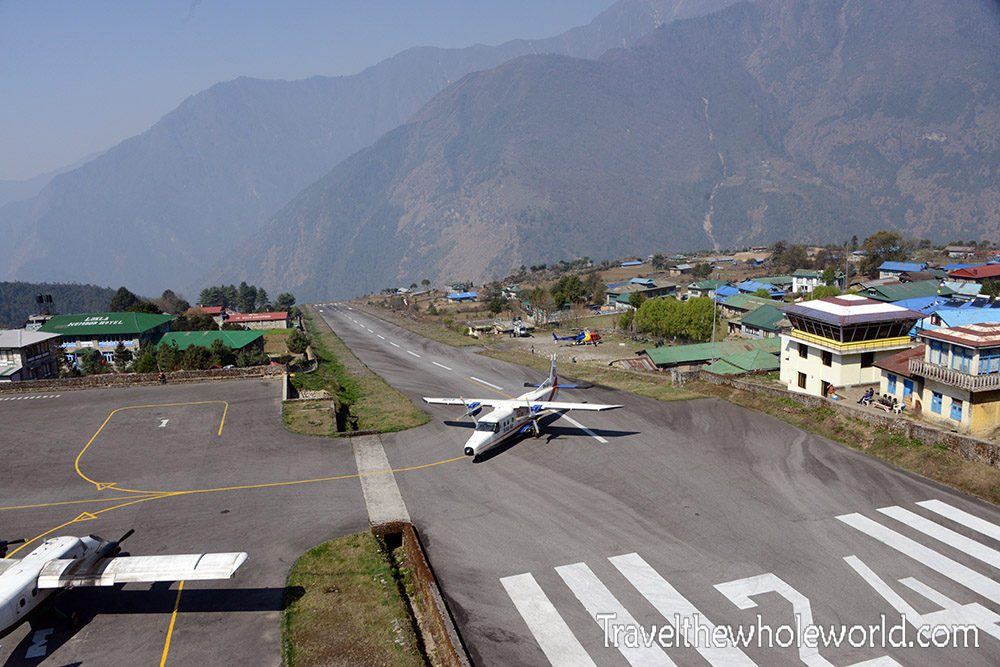 The vast majority of people visiting the Khumbu region will arrive by flying into Lukla airport. It’s often considered one of the most dangerous airports in the world because of it’s extremely short airstrip. What’s even worse is at the end of the airstrip is a steep mountain, so there is no way to abort a landing here! You simply can’t miss. 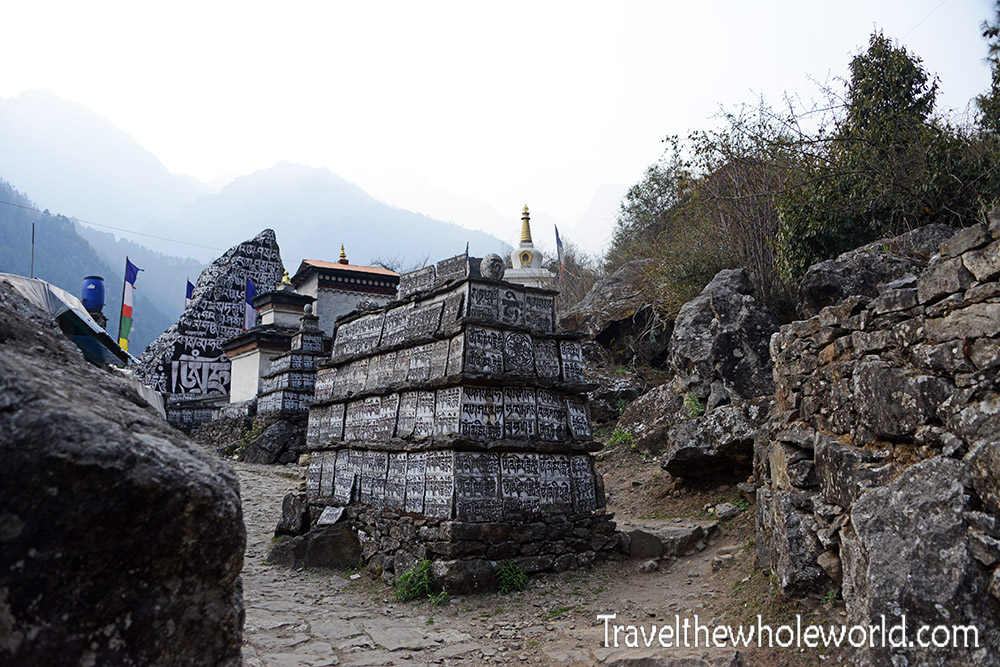 My team was focused on reaching Everest Base Camp, so we didn’t spend any time in Lukla but immediately took off to higher ground. Lukla is a pretty big town though, and has lots of places for accommodation and just about everything you could want regarding food and supplies. Just outside of Lukla, I passed these giant stones in the trail that were painted with Buddhist writings. The girl photographed below is one of the locals that lives in the nearby villages. Eventually on the hike to base camp you’ll get high enough that no one actually lives in the area, but rather open temporary lodges and stores to support trekkers. 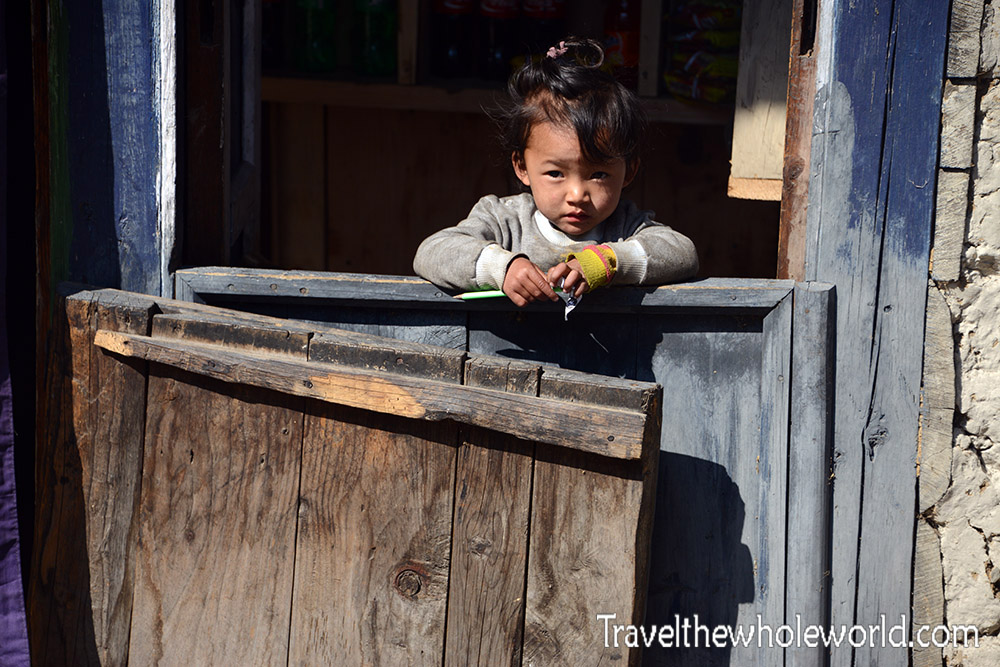 I was aware that on the hike to base camp there is lots of river crossings here, and knew I’d have to cross several long footbridges. I had mistakenly thought there was just a single bridge, but you actually zigzag across the river multiple times and use several bridges! 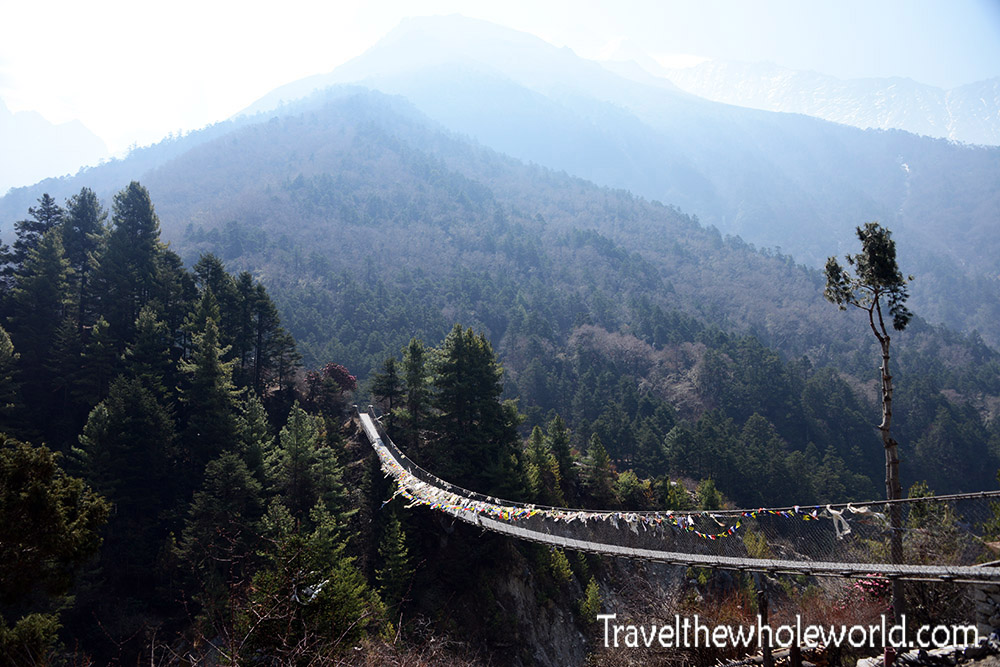 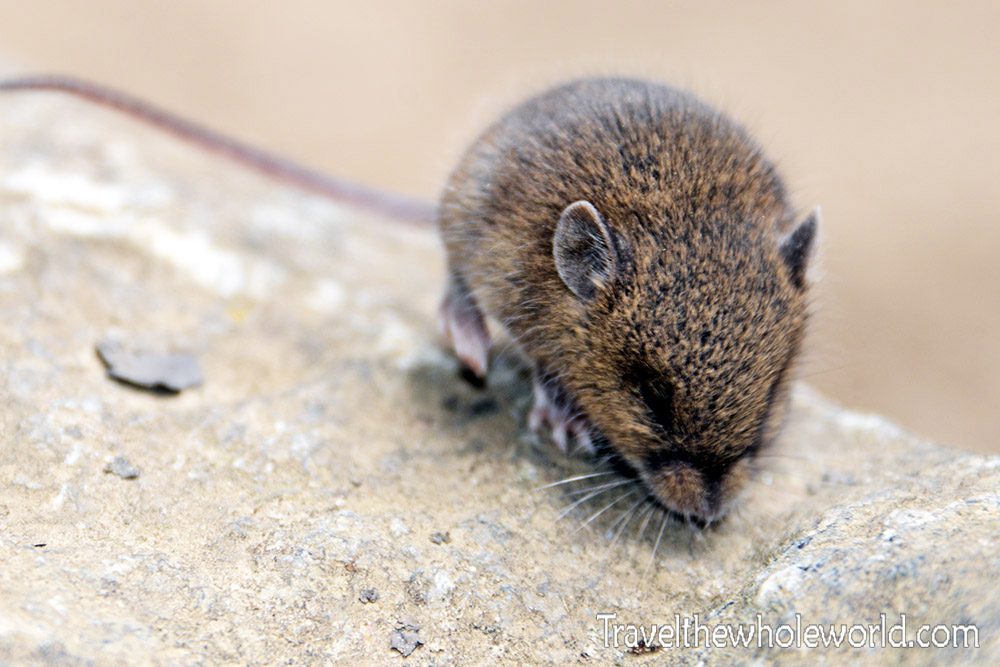 I didn’t see too much wildlife in the Khumbu Valley, mostly because of all the foot traffic along the trail. I did come across this little mouse though. It could be the endangered Himalayan field mouse that is endemic to Nepal, but I couldn’t tell for sure. This guy was small and didn’t seem to mind me taking some glamour shots of him. 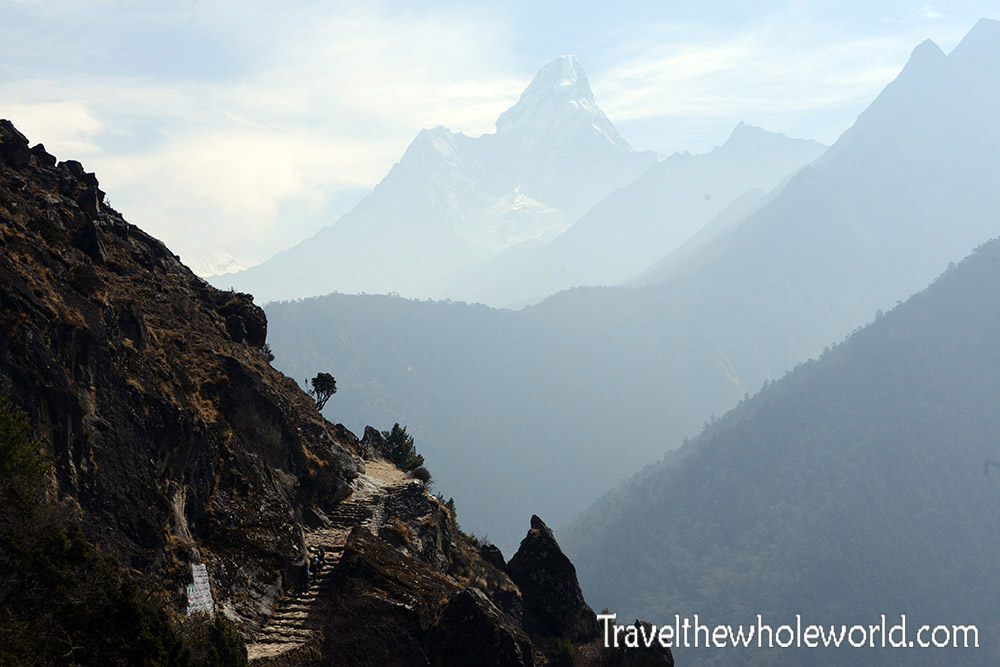 As you get deeper into the mountains, you start to view some really spectacular scenery. Probably the most famous peak on the way to base camp is Ama Dablam, also nicknamed the Matterhorn of the Himalayas. I think they got that backwards, and the Matterhorn should be called the Ama Dablam of the Alps! Above and below are shots of Ama Dablam taken on different days. 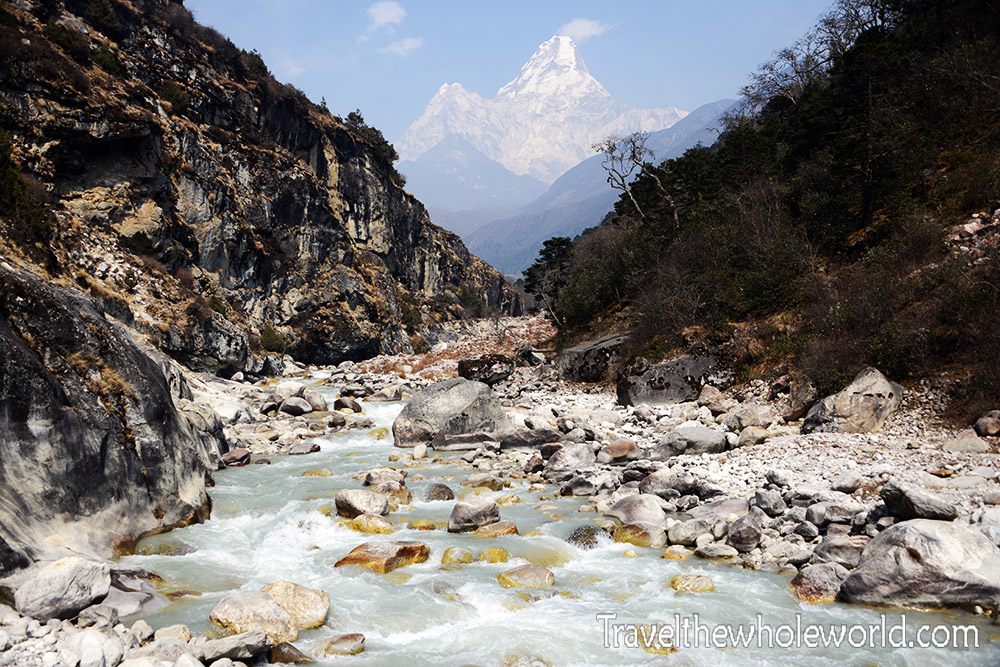 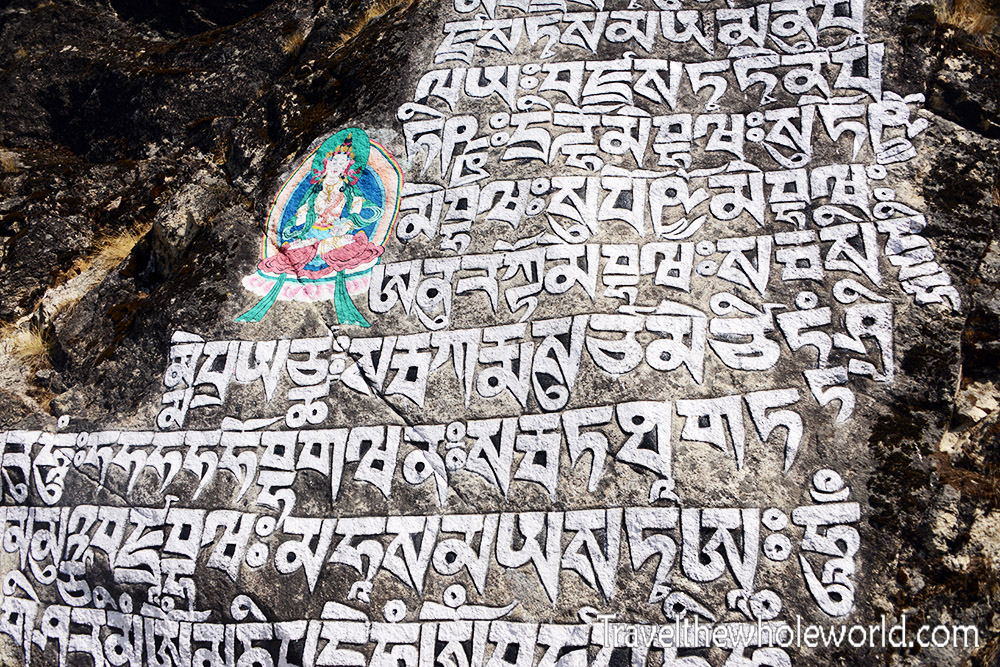 Along the roads and trails in the Khumbu Valley you’ll continue to come across lots of Buddhist writings like my second photograph on this page. The higher you go the less frequent you see them. These two surrounding photographs were taken close to the town of Namche Bazaar. Mani stones as these are called, hold inscriptions of Buddhist writings. 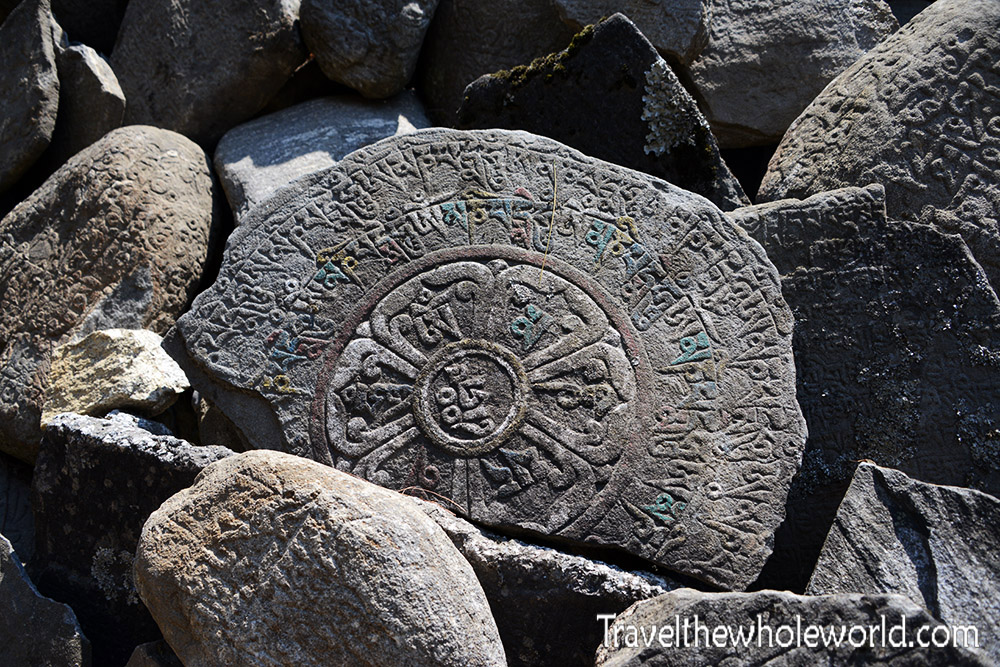 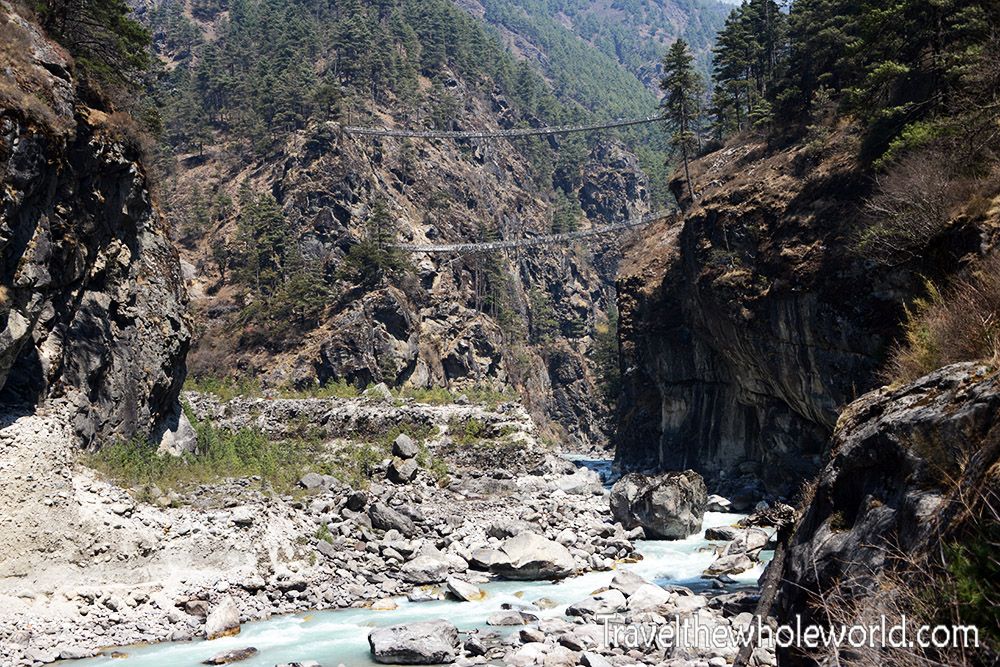 The double bridges photographed above were my favorite and came up right before we entered Namche Bazaar. We ended up using the top bridge of the two. I’m not sure if the lower one is no longer in use or just leads a different direction. After crossing the double bridge I checked my altimeter and we had just crossed 10,000 feet (3,050 meters)! 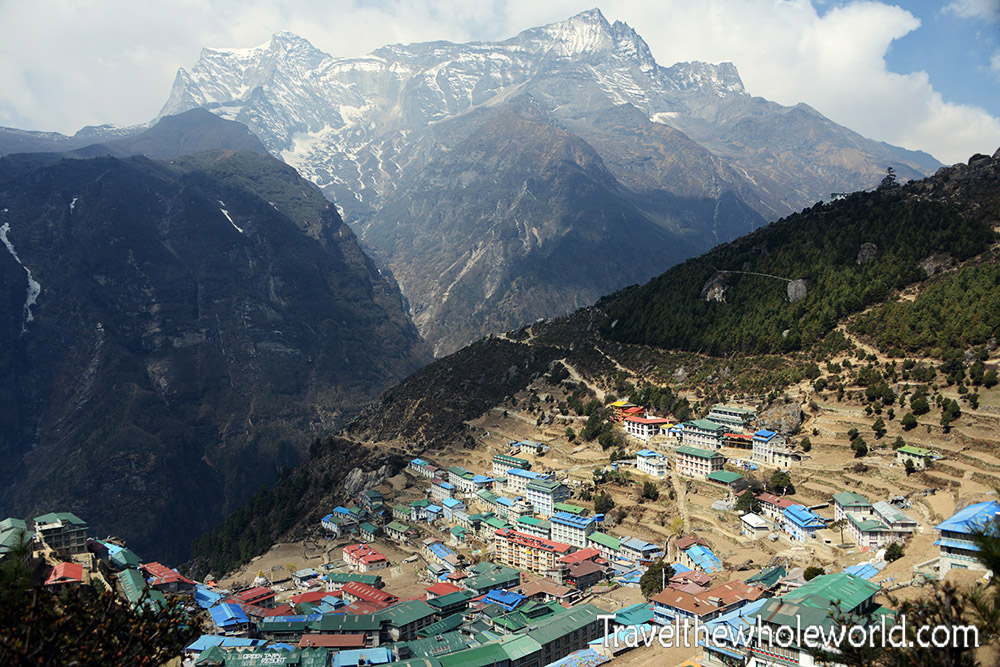 It’s hard to imagine any real civilization after hiking through some of the remote areas we went through to get to Namche Bazaar. The majority of the people on my expedition had already been here before, and they described it as the last place you can get a good meal or purchase any gear you needed. Above is a photo of Namche Bazaar which was taken near the top of the town. 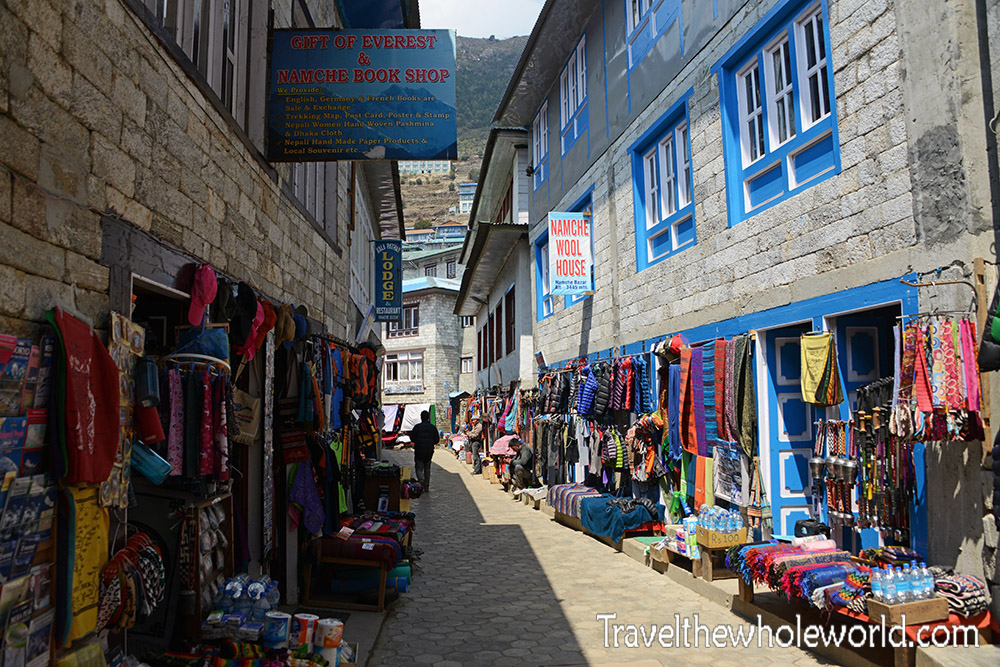 The photo above shows one of the streets in Namche Bazaar. The town is located at 11,000 feet (3,350 meters) so its pretty high for a place where people permanently live. Some locals told me that the streets were usually packed by this time of year but the earthquake had scared away most tourists this year. And it’s definitely true! You can get absolutely anything you want from Namche Bazaar! This includes everything from 8,000 meter climbing boots to solar charges. 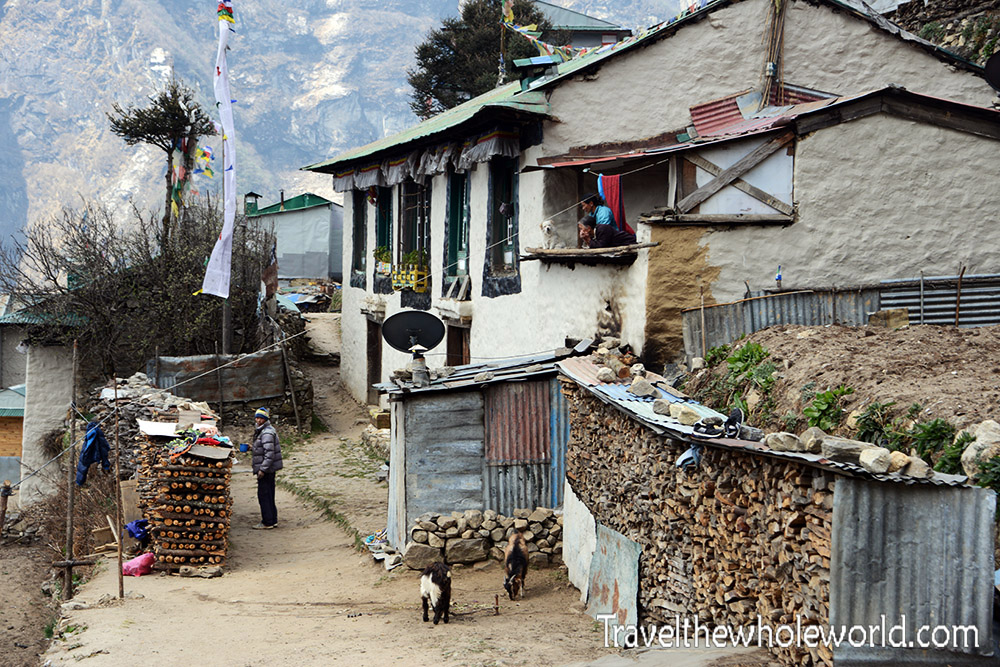 From above Namche looks pretty small, but when you’re in the heart of it you feel like you’re in a small city. The altitude isn’t crazy high here, there’s even some towns in the United States that come close the same altitude as Namche! I was more surprised about Namche’s existence because of its remoteness. There is no way to drive here so you’re either coming in on a flight or you have a very long hike. Above are some of the houses for the people that call Namche their home. 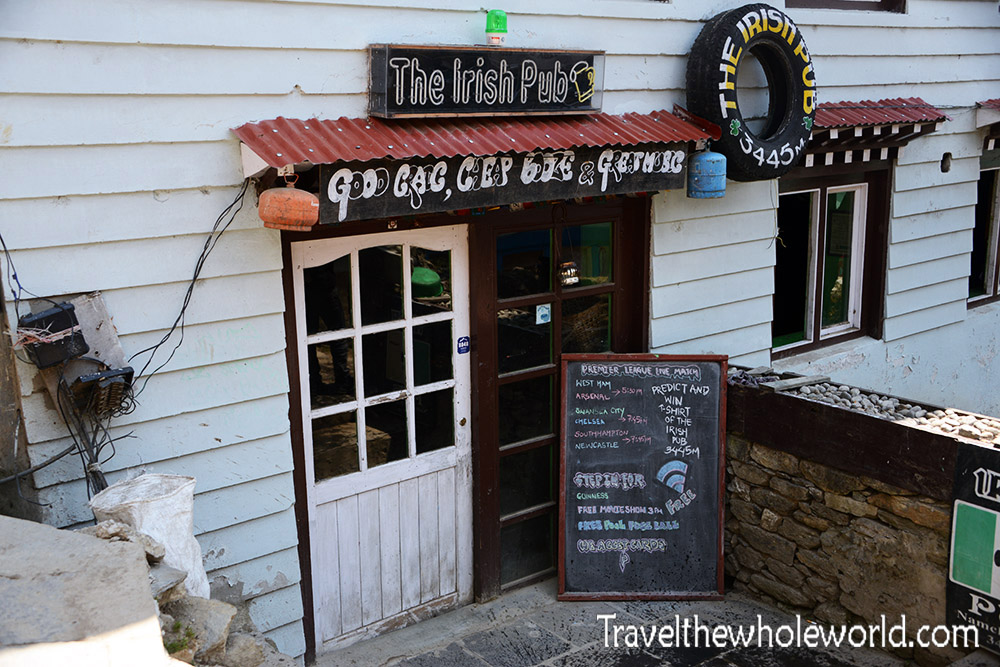 They even have this Irish Pub I saw above! On my way back from Mt. Everest I stopped by here for a Guinness which they were out of! You have to remember that everything for sale here was either hand carried from Lukla or put on a yak. There are no motorized vehicles that can make deliveries here, so don’t be surprised if things are sold out. 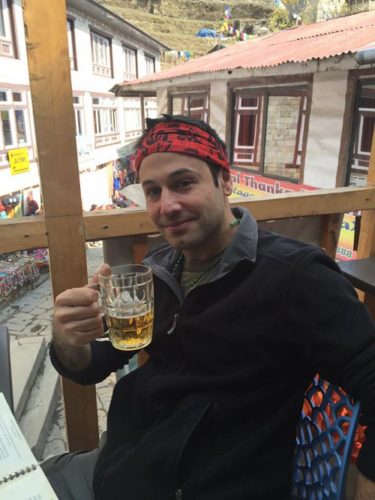 Luckily a place across the street had Guinness and great food. The photo above is me in Namche Bazaar for the first time where I had a local beer. The photo below is the inside of the bar, where they have all kinds of liquor and four types of beer. Namche was the last place going up that had free wifi and places to charge your phone. After Namche you have to rely on internet cards that charge by the data transfer, and using an outlet will cost a few dollars a minute! Leaving Namche is kind of like leaving the big city on the Khumbu Valley hike. 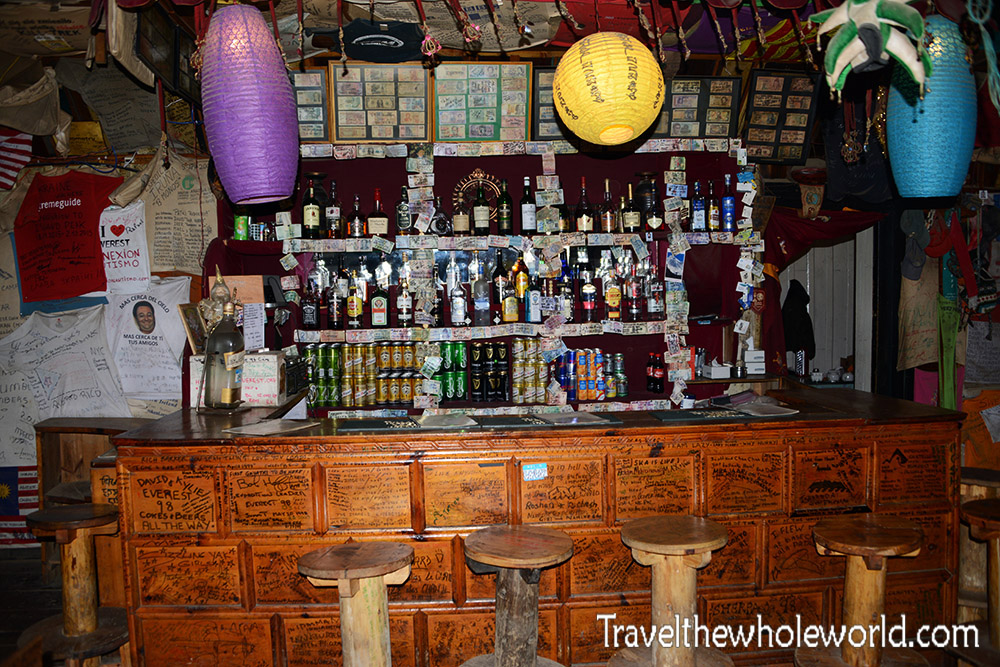 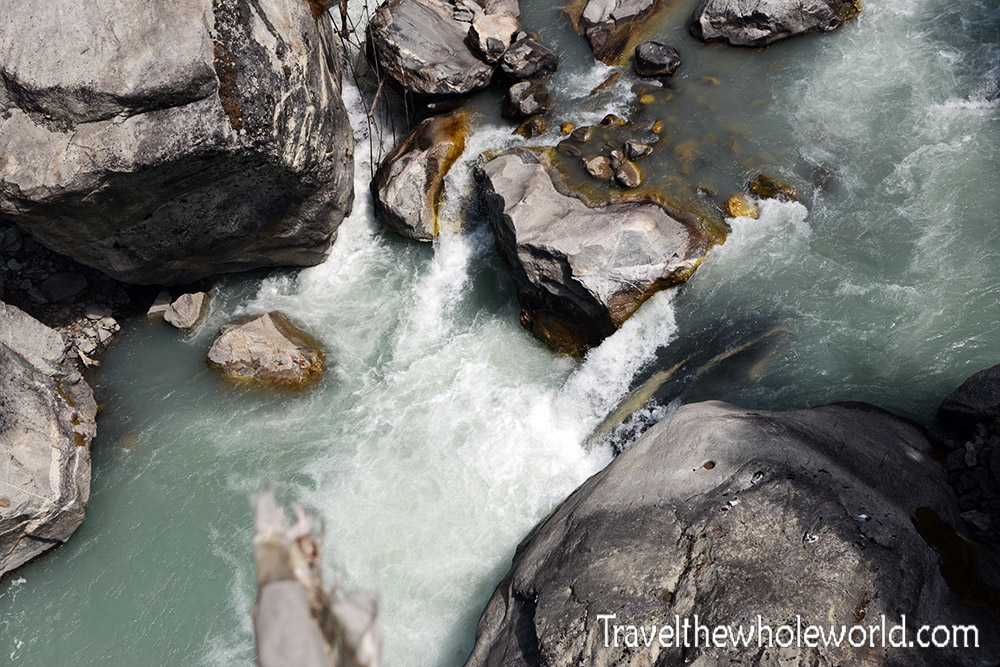 We spent two nights in Namche to help acclimatize to the altitude. When it was time to leave, we took off for the town of Dingboche which is located at 14,500 feet (4,400 meters). Along the way we had a few more bridges to cross and some beautiful rapids. The higher we got the more beautiful the water seemed to get. 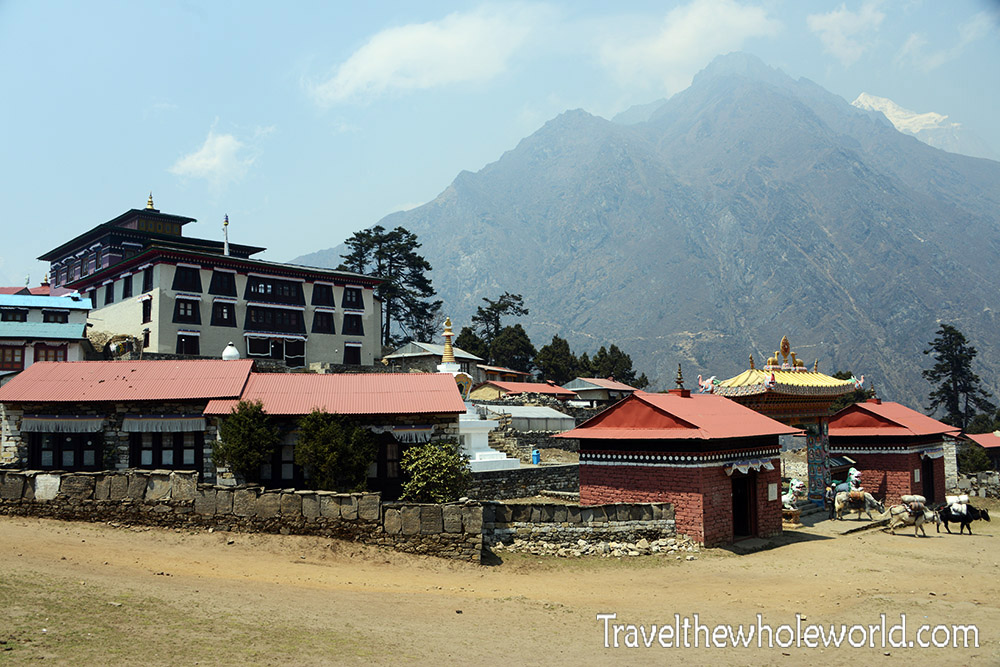 While trekking to Dingboche from Namche, we made a rest stop at the town of Tengboche. It’s a reasonable place to spend the night if you have time, but either way you should definitely stop along the way. Tengboche has a few decent restaurants and places to stay, but it’s most famous for the Tengboche monastery photographed above. The entire complex you see is all part of the Buddhist monastery that has existed here for over 100 years. The dragon below is at the main gates as you enter. 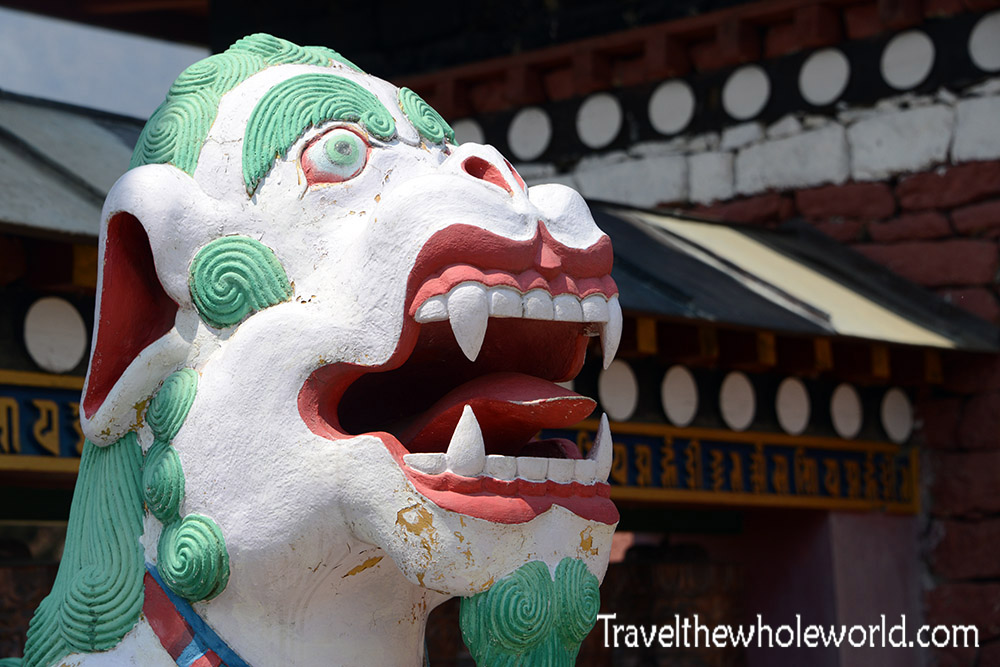 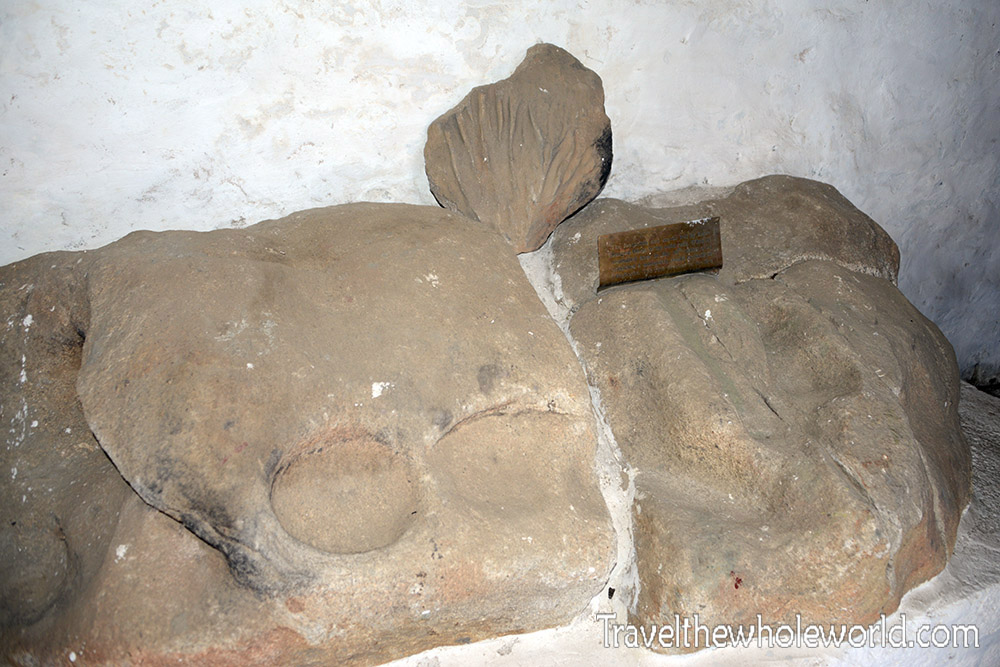 One of the first Buddhist monks in the Khumbu Valley known as Lama Sangwa Dorje came here hundreds of years ago. It was said that he meditated here on this rock leaving these footprints behind. This was what led to the monastery being established at this location in 1916. The inside of the monastery is beautiful and can be visited, but no photography is allowed. I was wearing shorts on my trek to base camp and although shorts aren’t allowed either the monks were nice enough to let me in anyway! 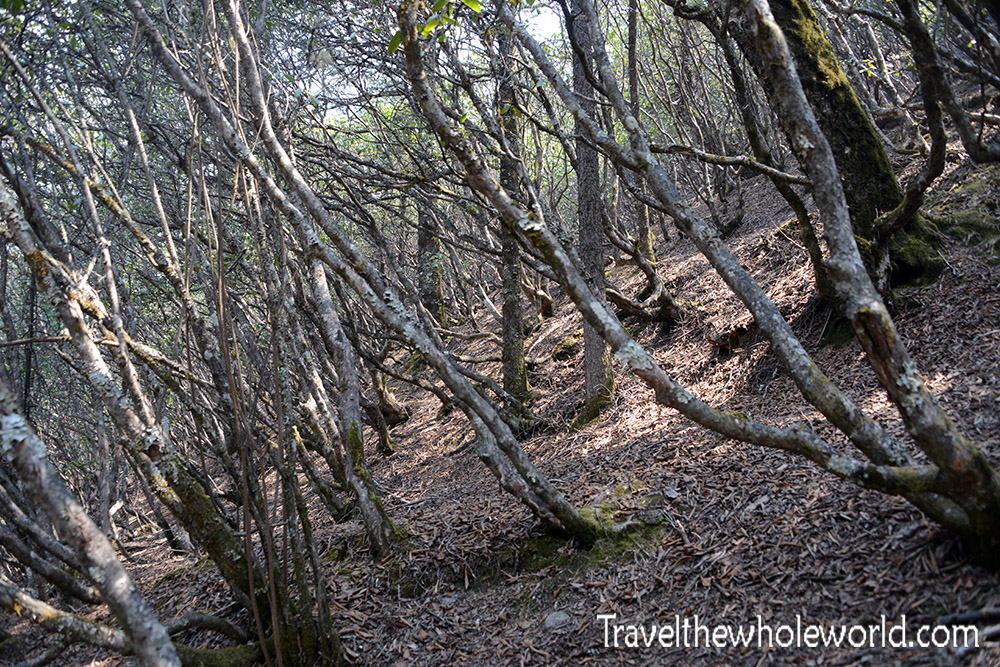 Tengboche is located at an altitude of 12,700 feet, (3,870 meters). The beginning of the Khumbu Valley hike had begun in near tropical jungle and changed to evergreens by the time I reached Namche. At this altitude, the trees were beginning to get smaller and look more like large shrubs. When I came back down in late May the entire Valley was much greener. 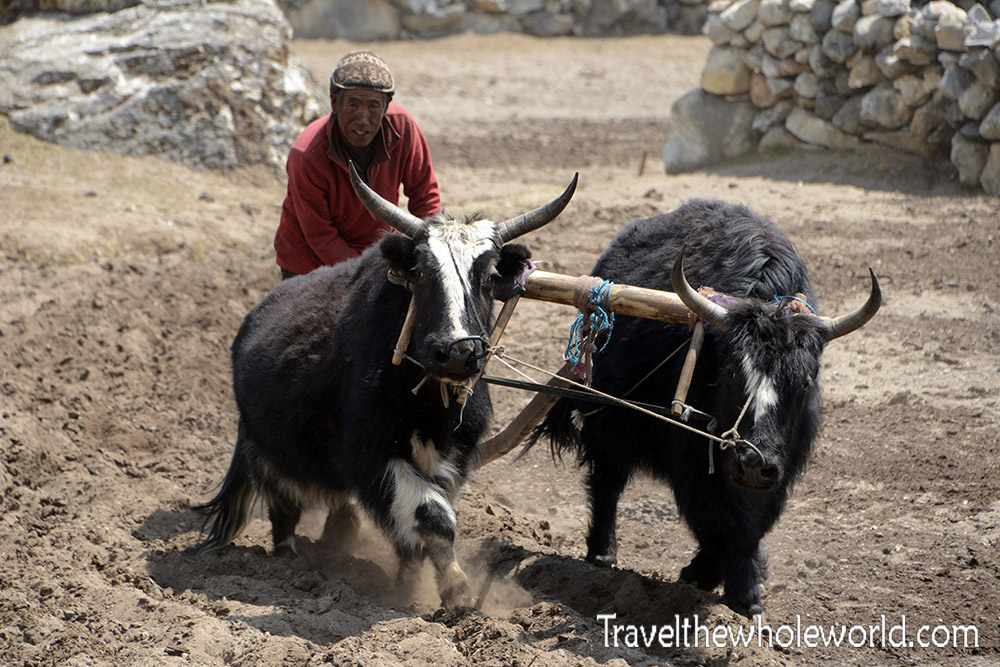 Dingboche is probably one of the last true villages in the Khumbu Valley as you head up higher. People live and work here like this farmer above, but beyond Dingboche nearly all the infrastructure is to support trekkers to Everest Base Camp. My understanding is that they will work only in the season running hotels and small restaurants and then go back down the valley or even all the way to Katmandu in the winter time. I should mention too that the rooms by now have really thin walls with no heat, and cost around $5 to $10 a night! 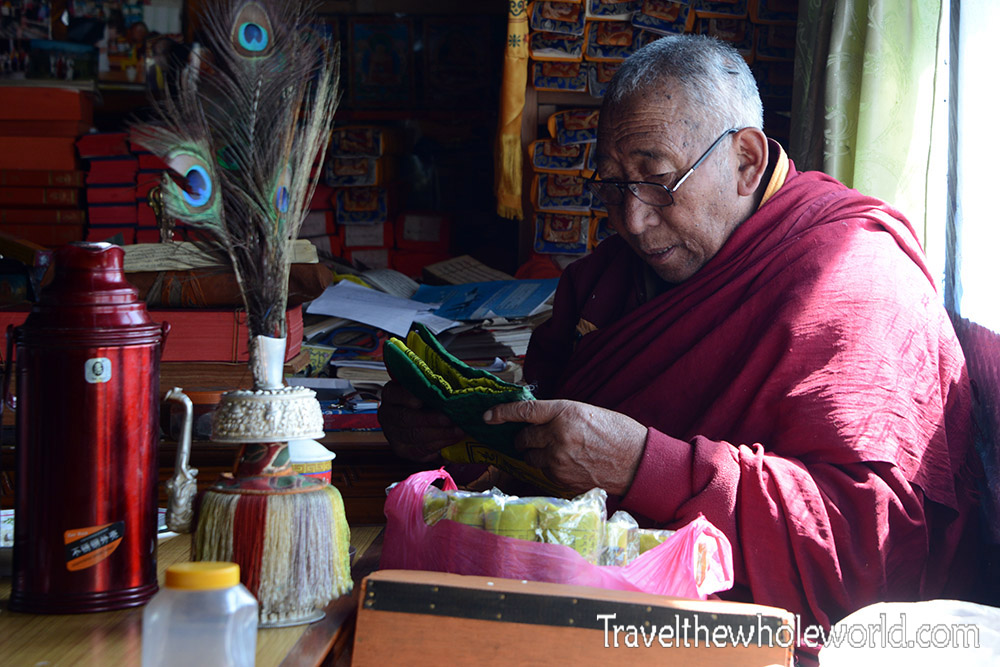 Although we visited the monastery in Tengboche, it was here in Dingboche that we had a blessing by a local monk. The ceremony involved us putting a small donation wrapped up in a small Buddhist Katak and handing it to the monk. Buddhist monks survive by donations of money, food, and other necessities. After this is done, the monk placed a small necklace on me, did a prayer, and then we briefly made contact with our foreheads. 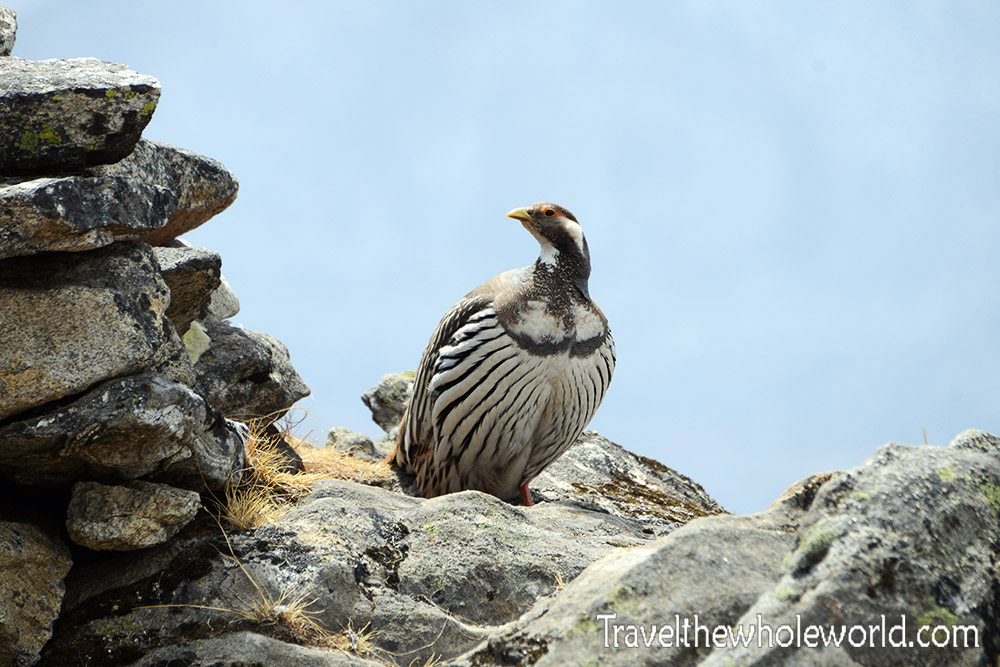 We spent two nights in Dingboche, the first day we visited the monk, and the second we did a local hike above 16,000 feet (4,900 meters). The hike was for Acclimatization purposes, and along the way I came across this quail. I was actually glad to see it, because I had seen one the day before but didn’t have my camera on me. I wasn’t able to find the species, but if you do any hikes in the foothills around Dingboche you’ll almost be sure to find one. The hike took us to the top of a small local peak photographed below. By now the views of the Himalays were absolutely amazing! 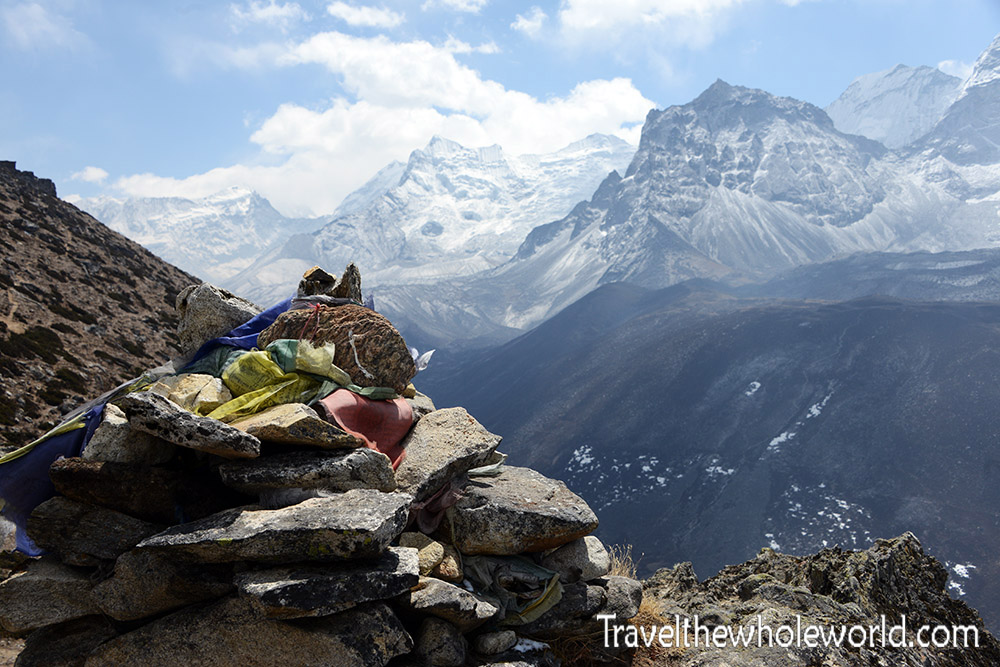 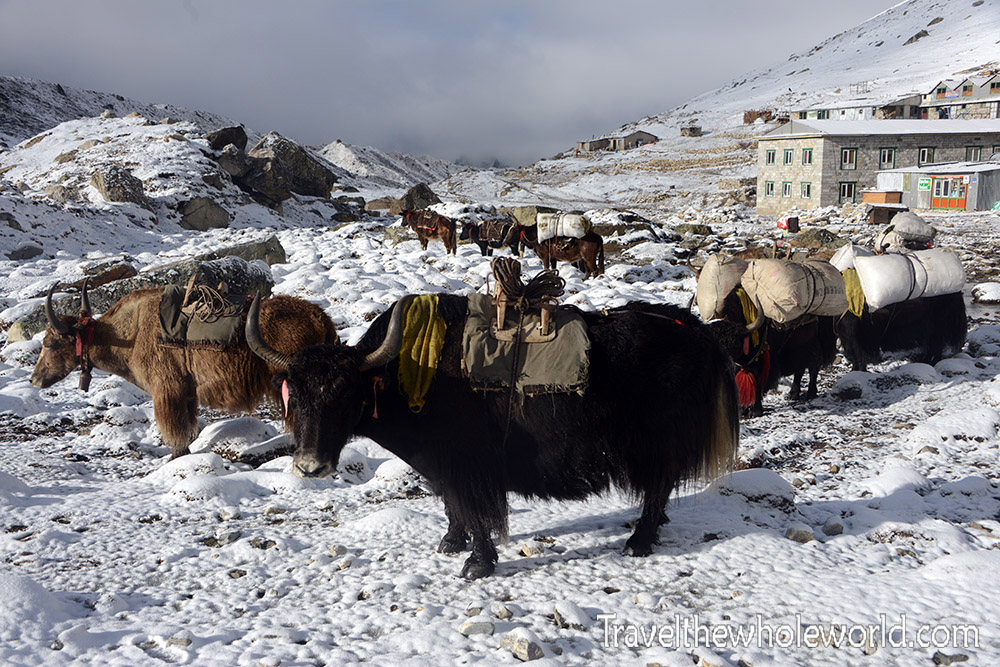 From Dingboche we hiked to Laboche, our final stop before Everest Base Camp! We actually got some snow flurries in Dingboche but in Laboche the snow actually snow. The sun is pretty intense, so views like this one above usually only exist in the morning before the snow all melts. Maybe it was after Namche that the pack animals changed from mules and yakows to true Himamalayan yaks. Yaks cannot survive in warm weather, and they begin to suffer at temperatures above 60F (15C). For that reason different animals are used below Namche, but above you’ll start to see these hairy cows carrying gear. 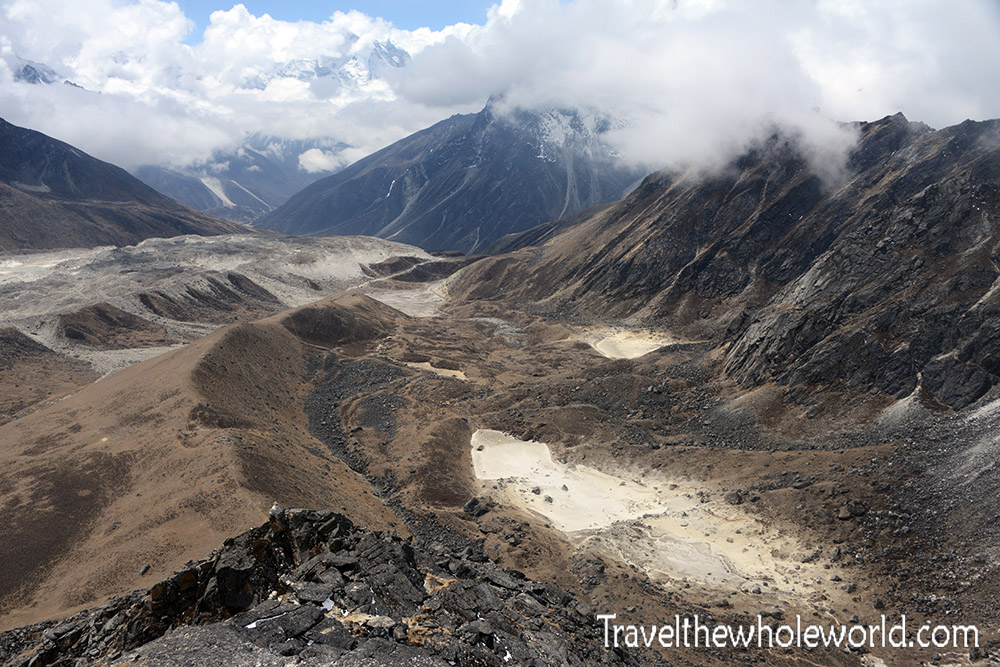 Because we went up and down many times on Mt. Everest to acclimatize, I actually spent a long time in Laboche waiting for good weather. Some of us had slept at 23,000 feet (7,000 meters) and afterwards went down the valley to recover and wait for a summit window. I spent over a week in Laboche doing nothing but hanging out in the dining room with my friend and doing the occasional hike to maintain fitness. I did a beautiful scramble just outside Laboche. 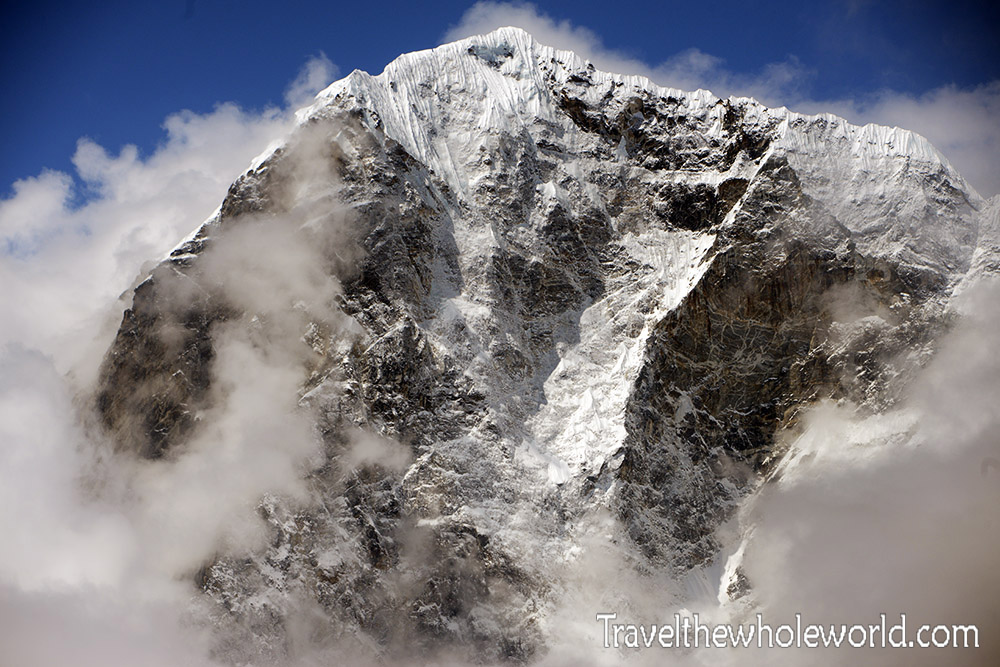 From this altitude above 16,000 feet or close to 5,000 meters, you can see some of the most amazing mountain scenery I’ve ever seen. There are so many peaks above 20,000 feet (6,000 meters) that Nepal doesn’t even require you to have a permit to climb them! You’ll even have trouble finding the names of some of the massive peaks around you, because there are so many that even the locals don’t know all the names. The one above I’m pretty certain is called Cholaste Peak, but wasn’t yet able to identify the one below. From Laboche, Everest Base Camp is just a four or five hour hike away! 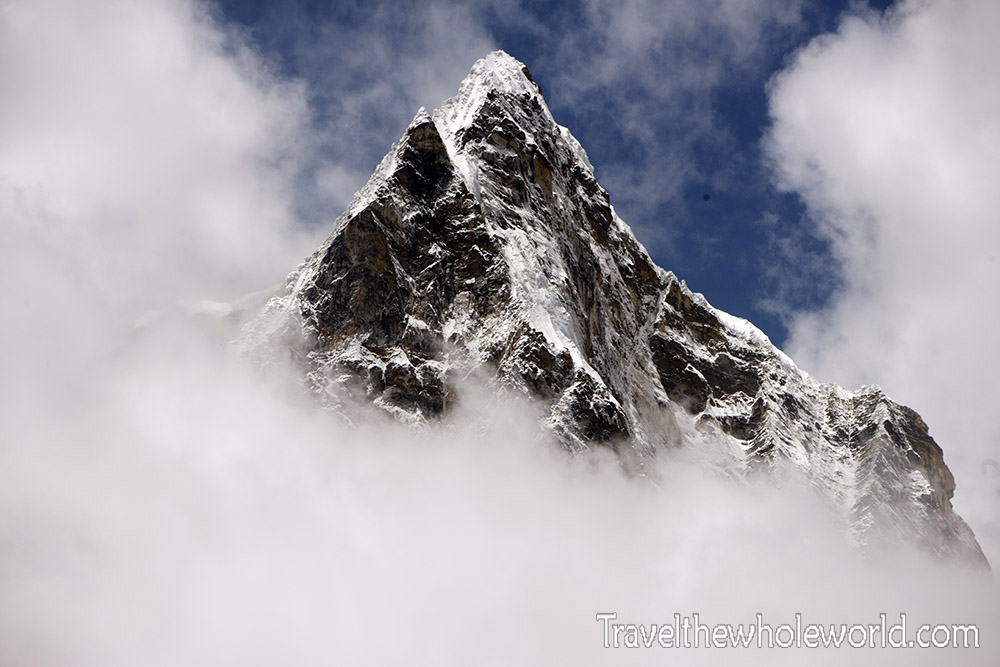 The Adventure Continues!
Click here to see Everest Base Camp!

Hike to Base Camp

Top of the World