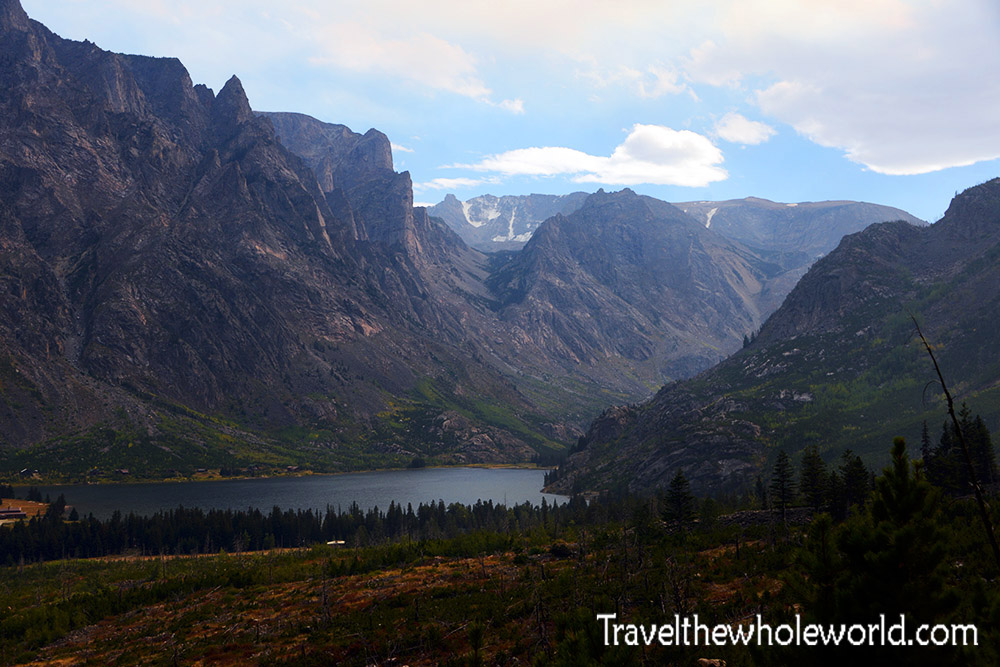 The Absaroka and Beartooth mountain ranges are how this wilderness gets its name. Somewhere in the midst of these vast area is Granite Peak, Montana’s highest mountain. Our attempt at Granite Peak began on a simple hiking trail that immediately rewarded us with amazing views. The photo above was taken early in the morning when we had just began our hike. 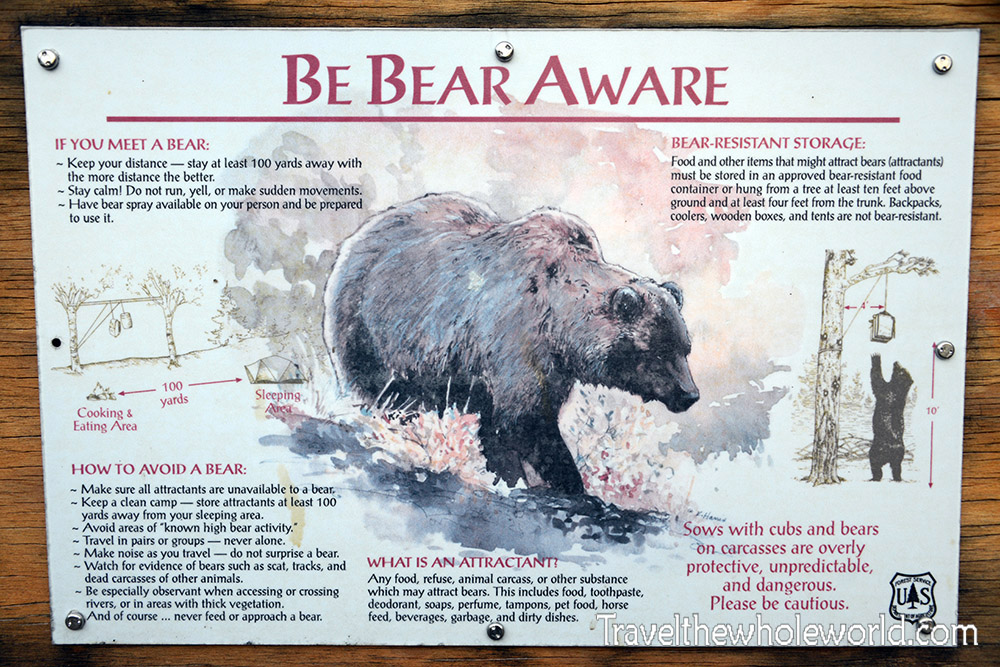 Right at the trailhead was a big warning side for the wildlife, particularly grizzly bears. We didn’t bring any bear spray with us, which was a huge mistake but luckily we didn’t have any encounters along the way. A few minutes after the trailhead start was an official sign below welcoming us into the wild. 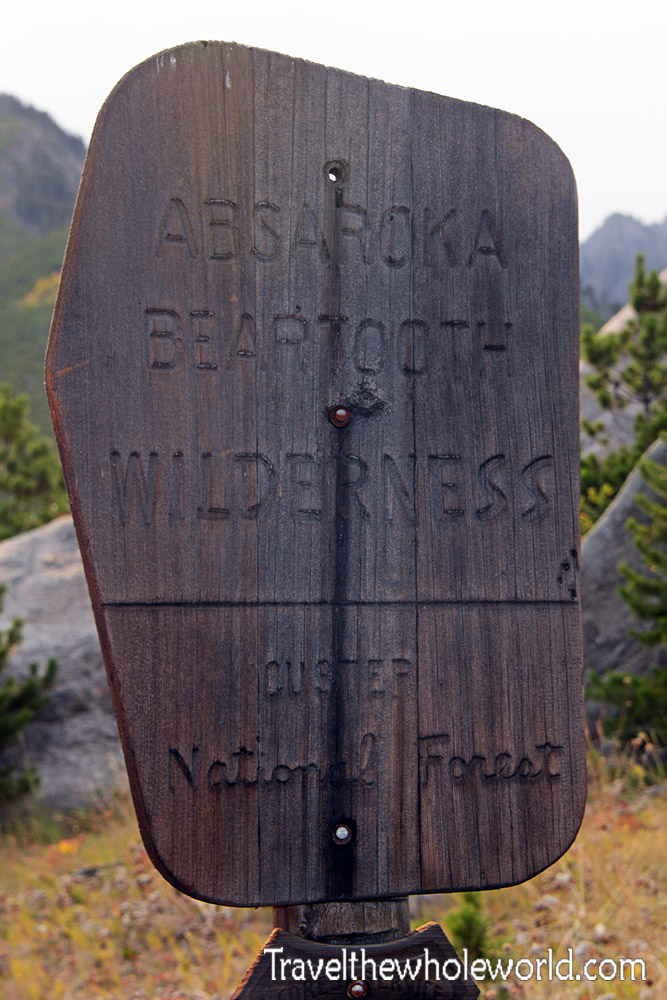 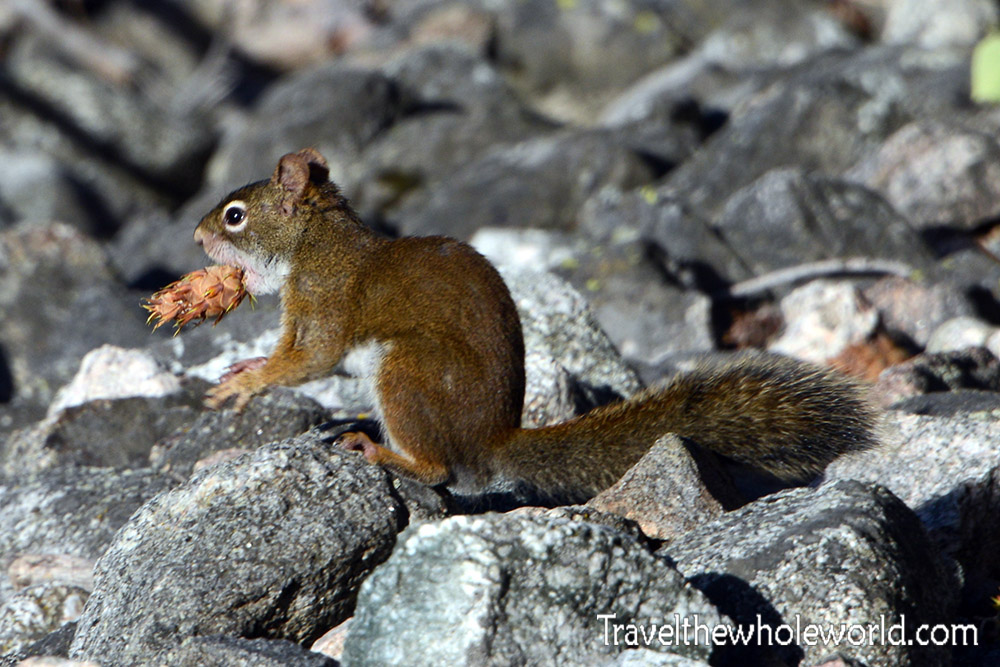 We didn’t see much wildlife actually. I was hoping to see mountain goats higher up but these small squirrels were seriously the only thing we came across other than birds! Most of the squirrels were very loud and seemed annoyed we were passing through their territory. This guy was playing around with a fresh pine cone. 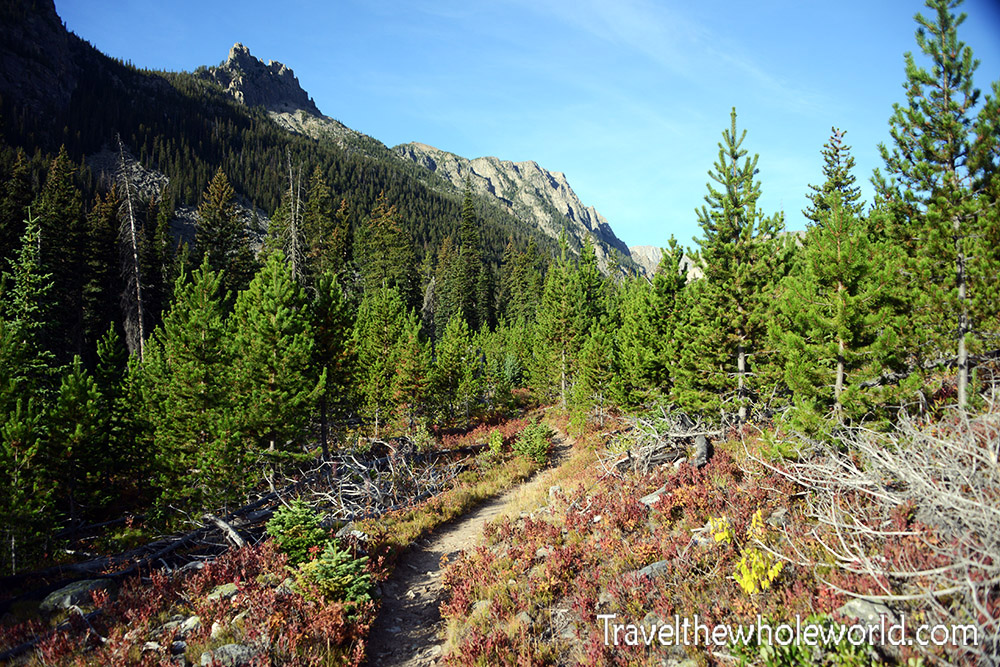 The trail almost immediately began as switchbacks, but nothing too steep. The trail begins at 6,200 feet (1,890 meters) and quickly rises to 7,200 feet (2,200 meters). After that the trail follows a valley without much incline. 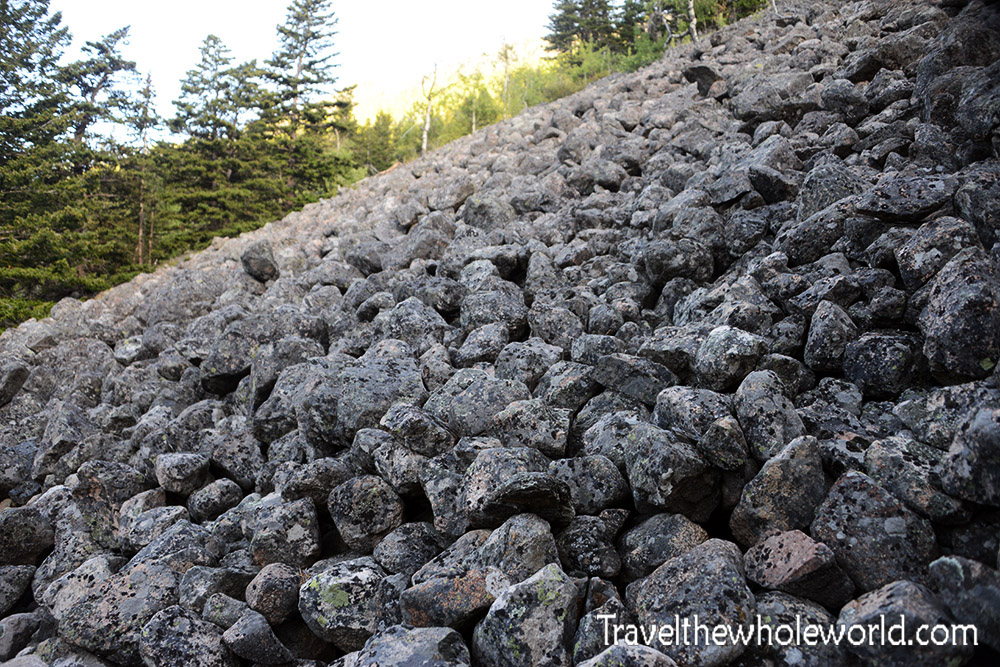 The trail went in and out of tall shrubs to forested areas, and passed by this large rock slide. I’m not sure the geological reason for this, but I know something like this even exists in my home state of Virginia! It’s called the Devil’s Marbleyard, and I have yet to visit it. 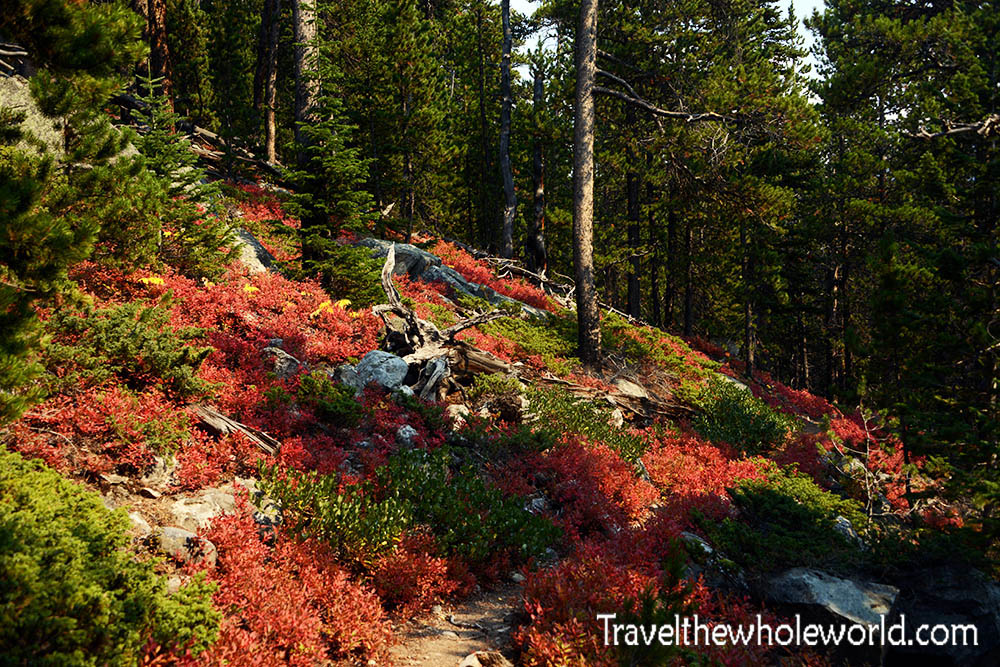 Even though it was only mid September, some of the foliage was already starting to change color. We were well aware that our trip to these mountains was going to be very short before we even started hiking. The day we began our trip we had temperatures around 60F (15C). The temperatures at our camp were to be freezing, which is easy to deal with. The problem though was a major snow storm was coming in dropping temperatures even lower and dumping about 15 inches (38 cm) of snow! It seems some of these plants should have started losing their leaves even earlier. 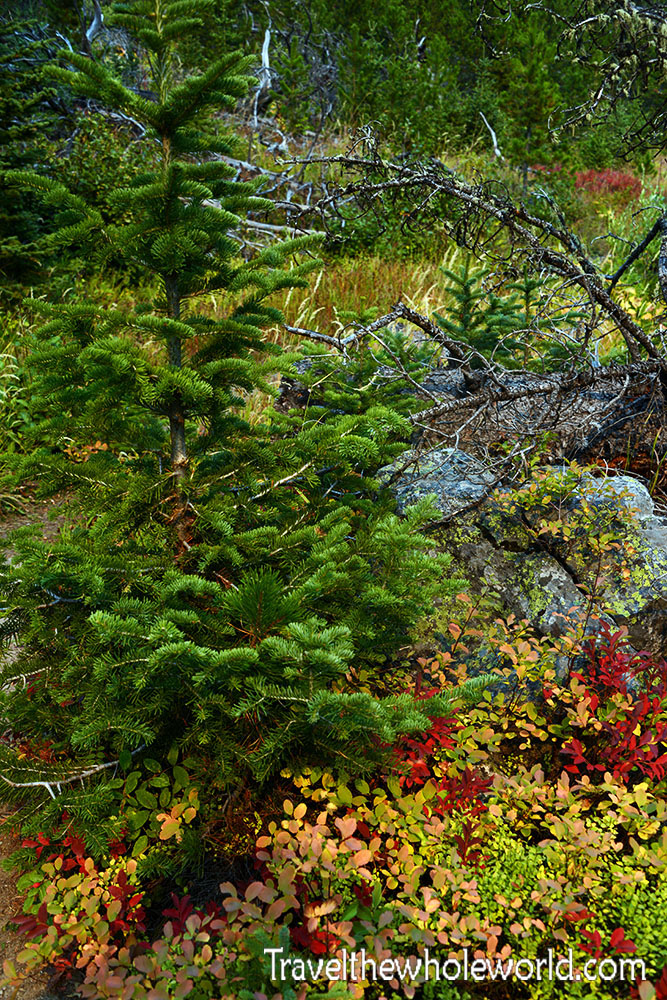 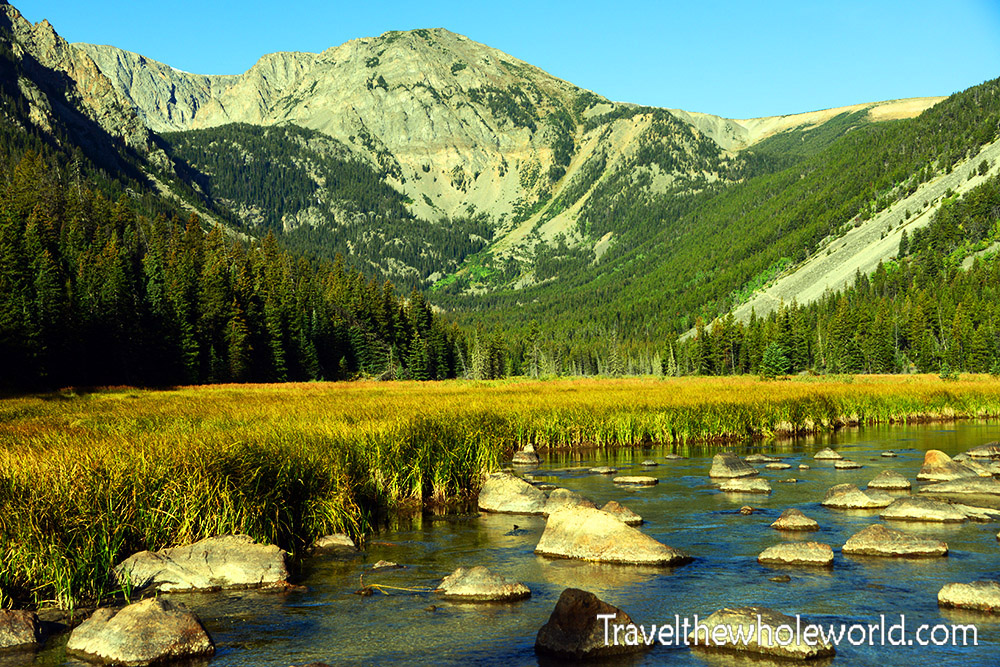 After hiking through the valley for about an hour or so, we came across a marshy area of the Armstrong creek. In the background was a large mountain and another beautiful scene in the Absaroka Beartooth wilderness! We had hoped to see some wildlife here like a moose or bear along the water but it seemed eerily quite instead. 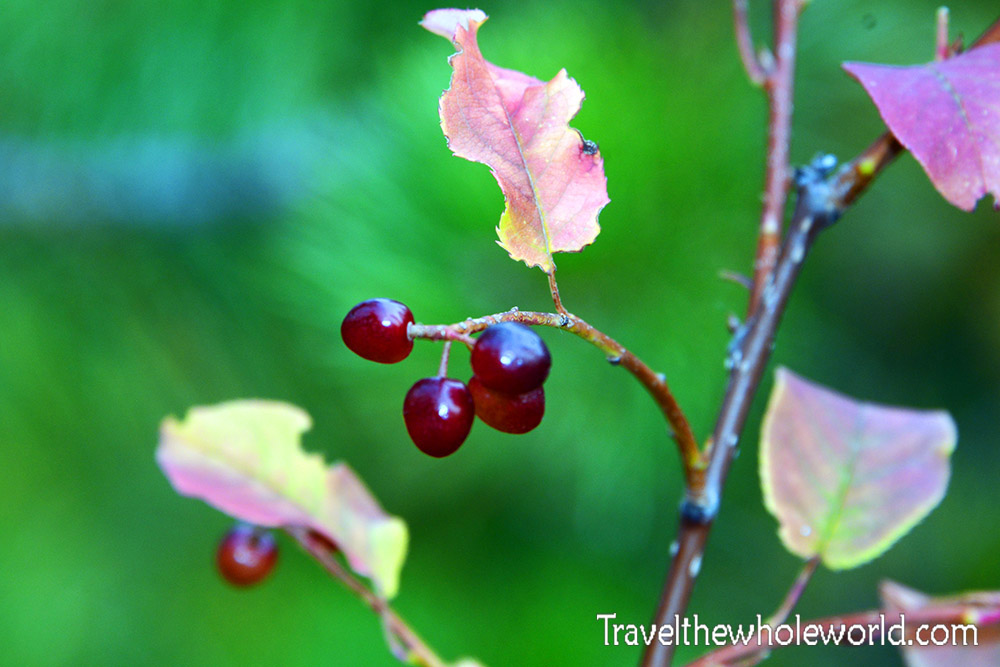 While we didn’t see any bears, there was still plenty of bear food around like these berries and other plants that they eat. For that reason I highly doubt they were hibernating yet. I wasn’t too worried about a bear encounter because we were in a group of three, and we also weren’t planning to camp at an altitude where bears live. After hiking to 8,500 feet (2,600 meters) one of my friends sadly had to turn around because he wasn’t feeling well. None of us had got much sleep the night before, so that combined with the altitude and difficult hiking forced him to turn around before he got sicker. 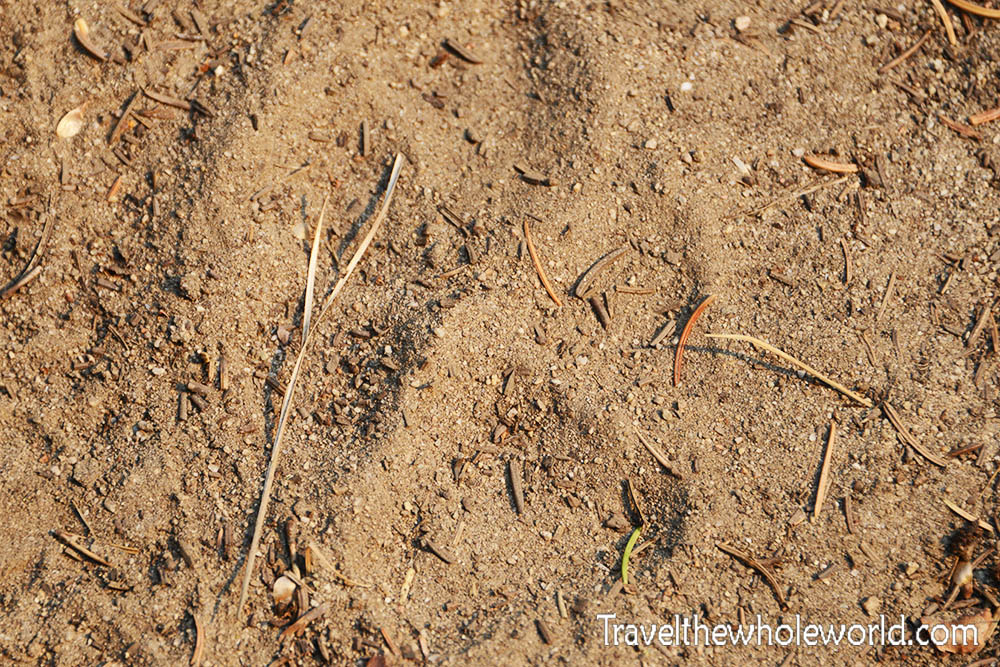 Fortunately my friend was not attacked by a bear on his solo decent down. It was only a few hours from the car and still in the middle of the day so it seemed reasonable for him to turn around now rather than later on. My other friend and I did see the large paw print in the trail. Later on we went to Yellowstone and found a book that showed the paw prints of local wildlife. It most definitely seems to be a mountain lion based on the size and the details of the print. Below is a photo of my other friend who was with me as we hiked through the valley. 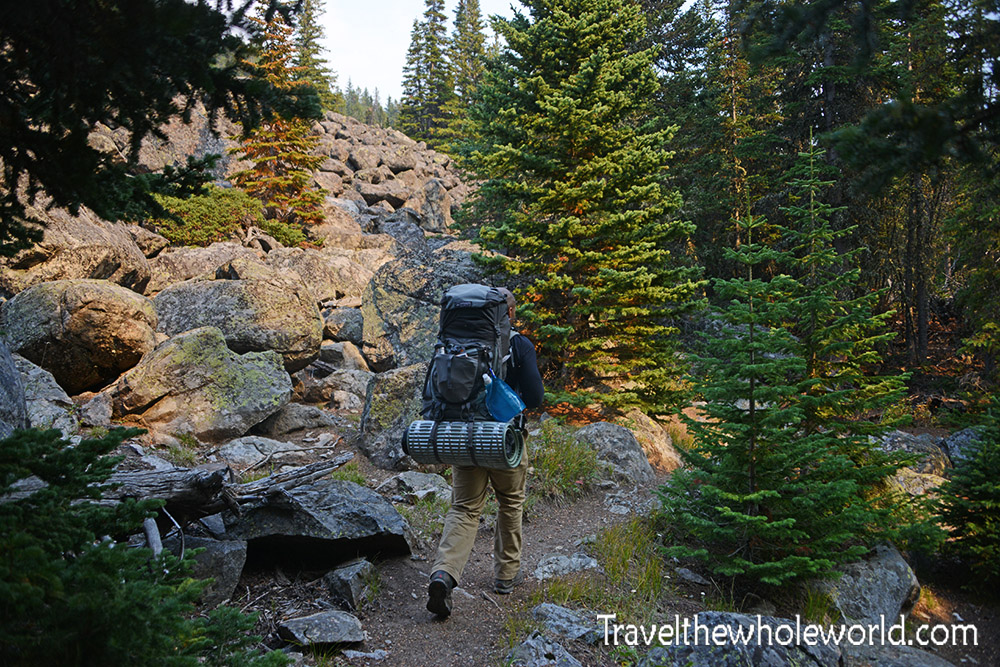 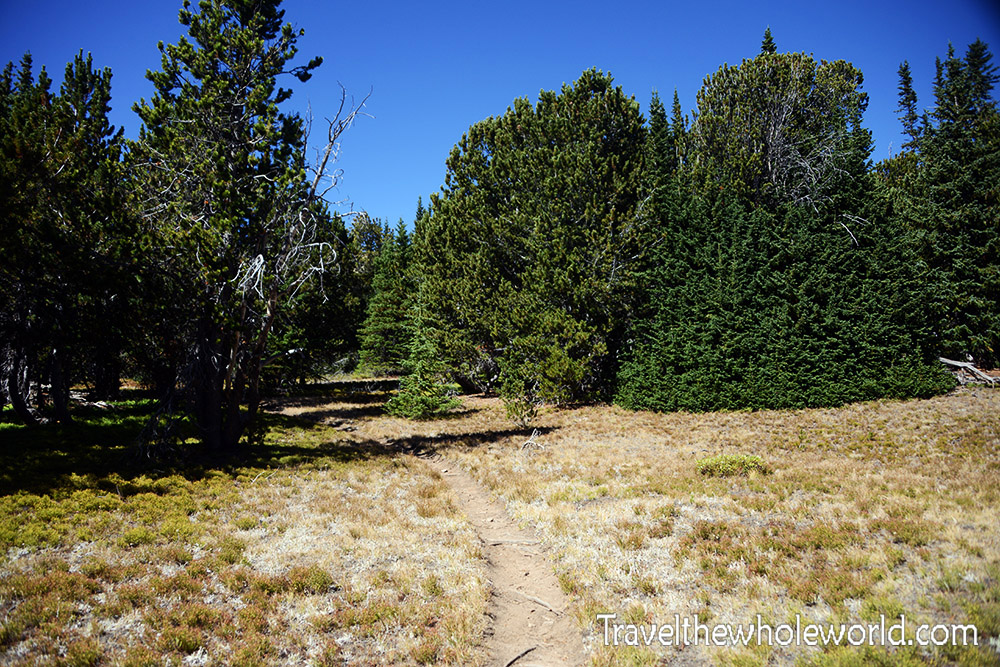 Before my friend had turned around, we suggested he attempt to finish the so called “Switchbacks from Hell”. These switchbacks lead up from the valley to the top of Froze to Death Plateau, covering nearly 4,000 feet (1,200 meters) in just a few miles. We had crossed a few switchbacks already, but these were spread out. I had assumed the switchbacks began at the bottom of the valley in a non stop series until we reached the plateau. My friend had turned around when we were about halfway up in terms of elevation, and about an hour later the remaining two of us came to a nice flat area seen above. There was a fallen tree below, and a few items from someone’s camp site. 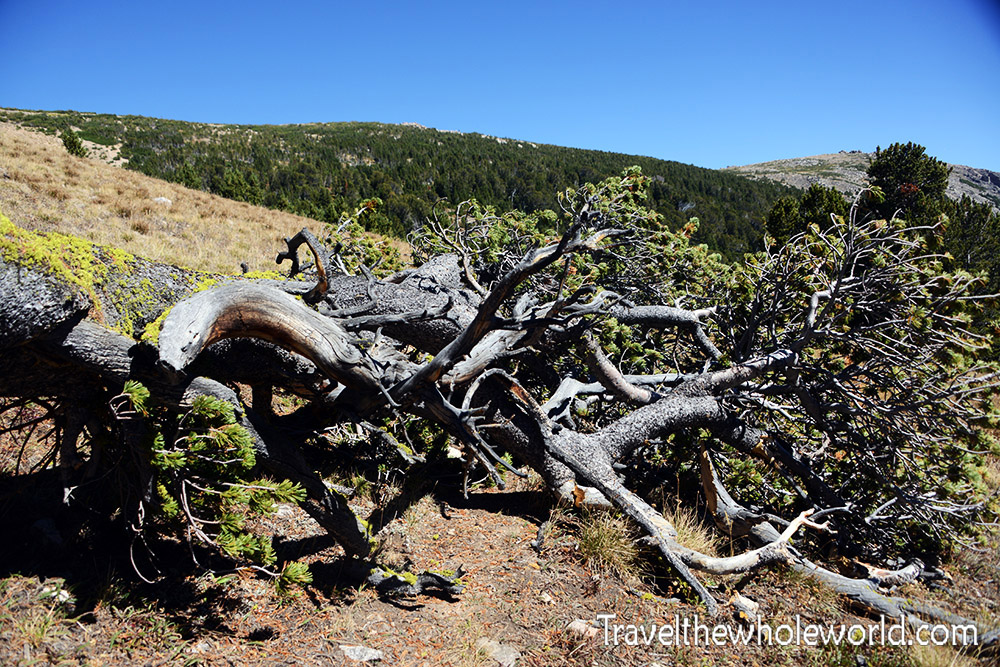 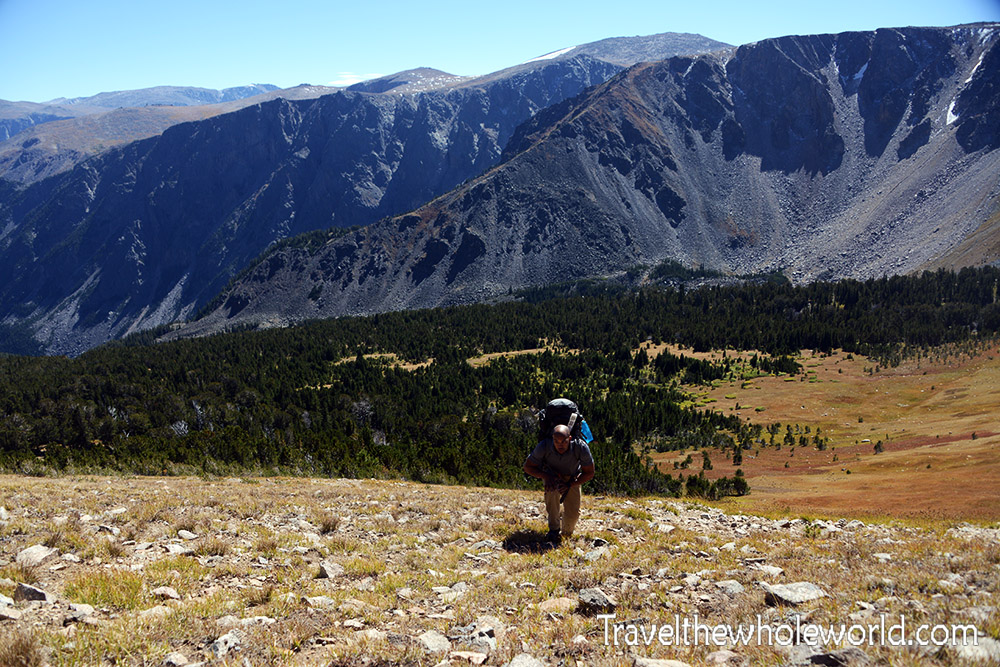 From that point there were a few switchbacks that led to the plateau, and it was then that we realized we had been doing the switchbacks the entire time. I’ve seen so many horror stories online that I was expecting some brutal and relentless terrain, only to find out I didn’t even realize I was on the switchbacks until it was all over! Below is a photo of the beginning of Froze to Death Plateau. 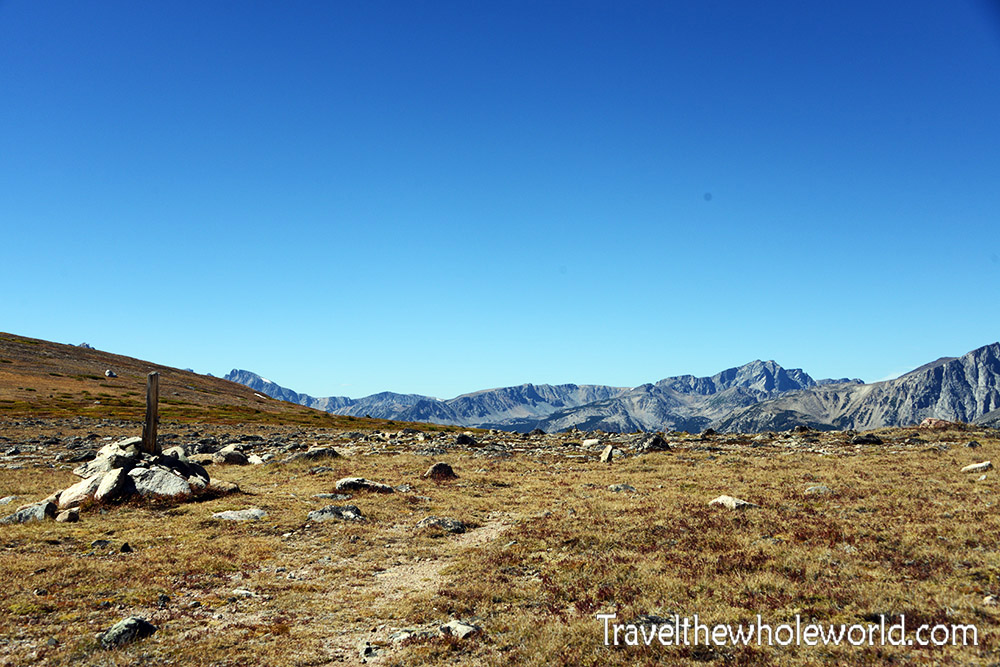 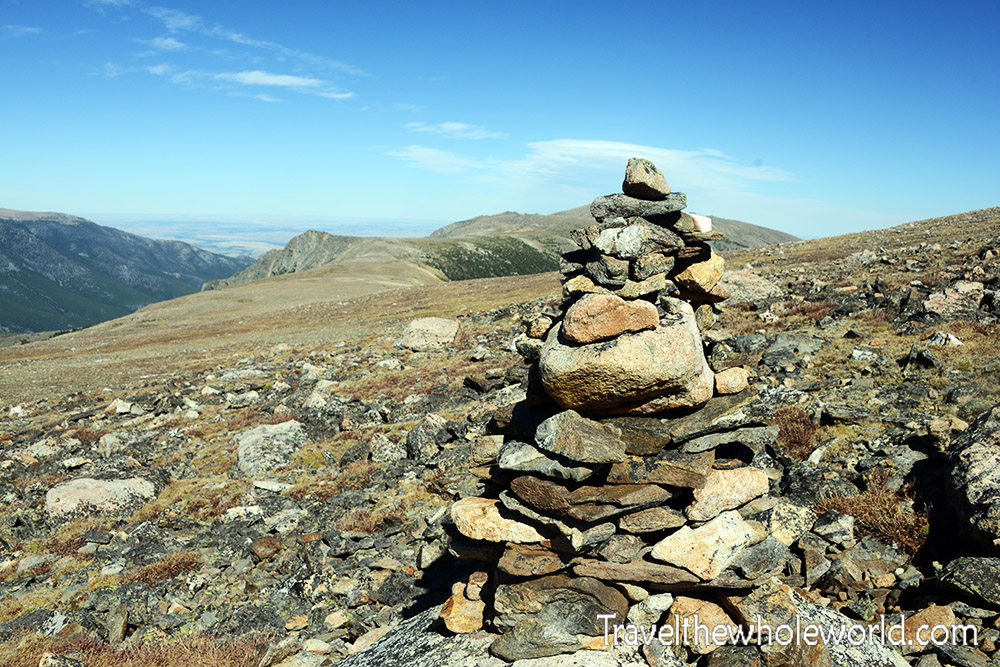 This photo above shows a large cairn which marks the initial trail to the plateau. From the trailhead to the plateau, the trail was extremely obvious and impossible to get lost. Once on Froze to Death Plateau, you’re mostly on your own except for these occasional placed cairns. This photo is looking backwards from where we had just came. The Phantom Creek trail we had taken rises up on the right side of the photo in the background, right before the dark green area. 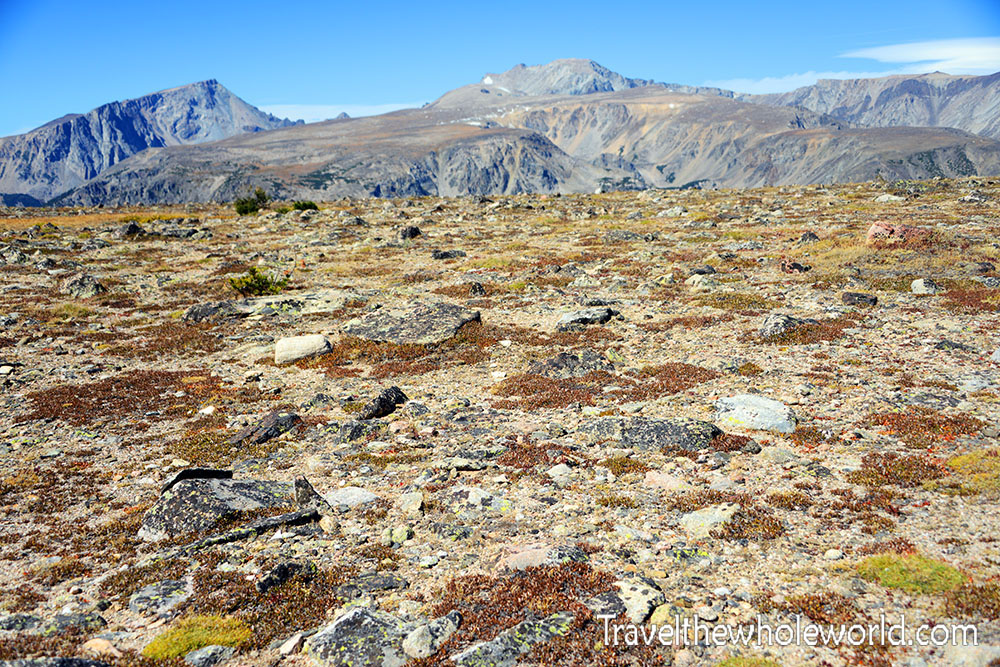 Initially the plateau was gentle and grassy, and looked like any normal environment close to sea level. After a short time it changed to a more barren but colorful environment. 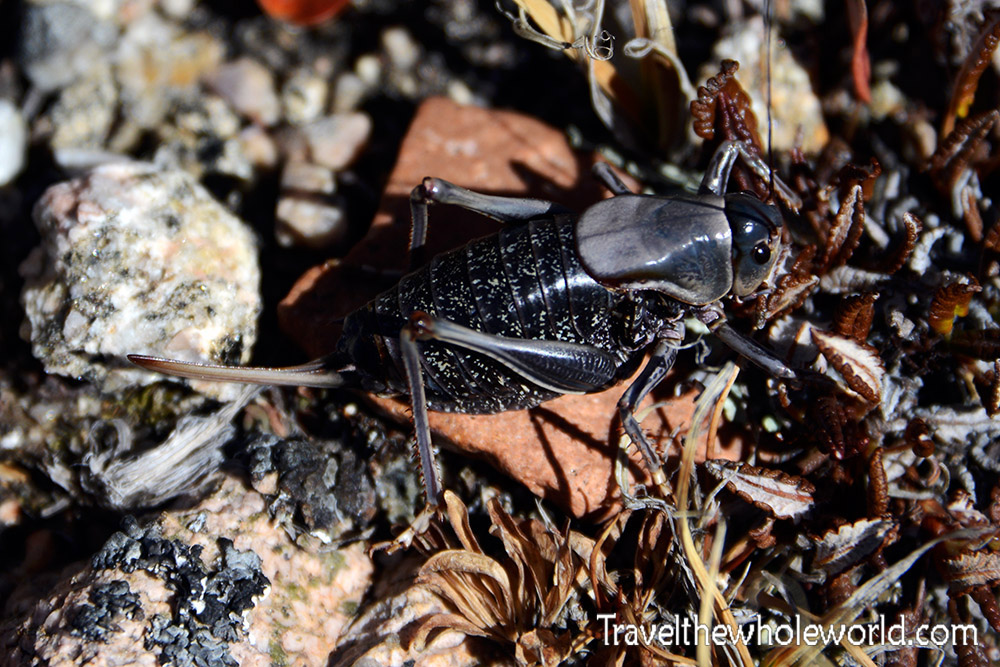 High winds and extremely low temperatures that hit the plateau make it a harsh environment for wildlife. Mountain goats are often seen up here, but I can’t imagine a bear, mountain lion or any other large animal would explore this place. Incredibly this huge disgusting cricket makes its home on the plateau! 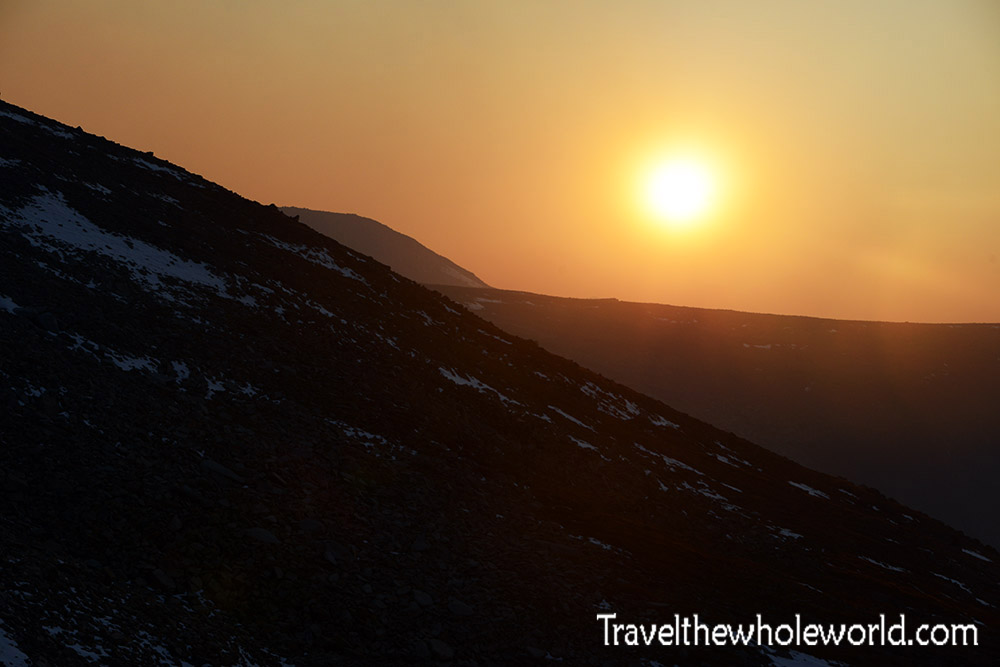 As we continued along Froze to Death Plateau, the environment got windier and there was patches of snow left around. My friend and I decided to make camp at 11,000 feet (3,350 meters). We had lots of time left in the day, so it was kind of nice to take a nap and enjoy the evening. At sunset I took this photo above. 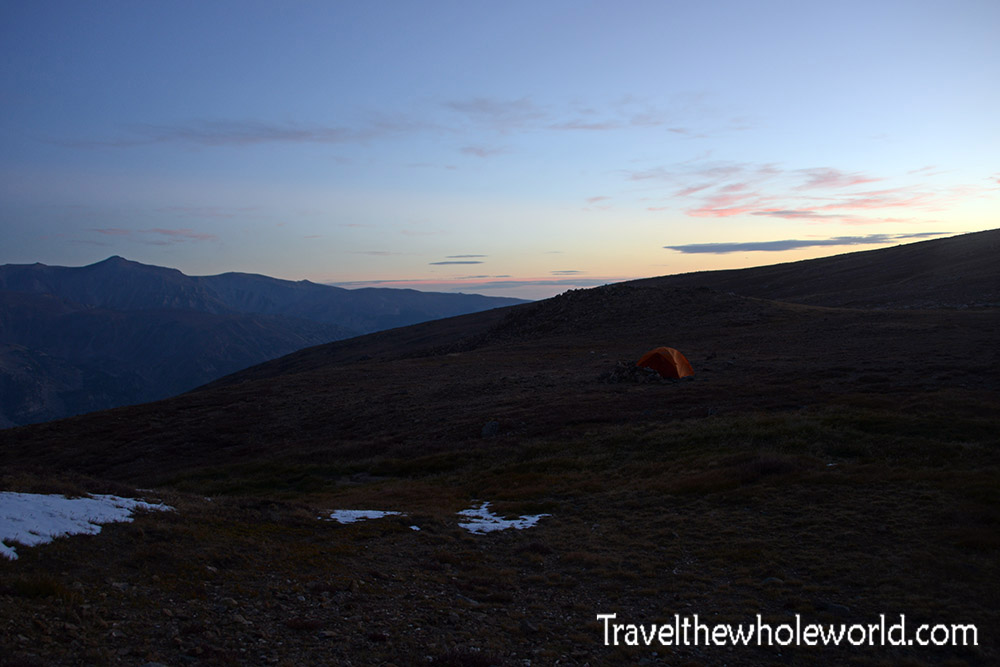 Our tent suffered from strong winds during the day and night. Luckily there are plenty of rock walls built up around Froze to Death Plateau to help protect camps. Our tent took advantage of one of these but we still got hammered by the winds. The photo above shows the view from our tent peering over the rock wall. Below is a photo of our tent from a short distance. 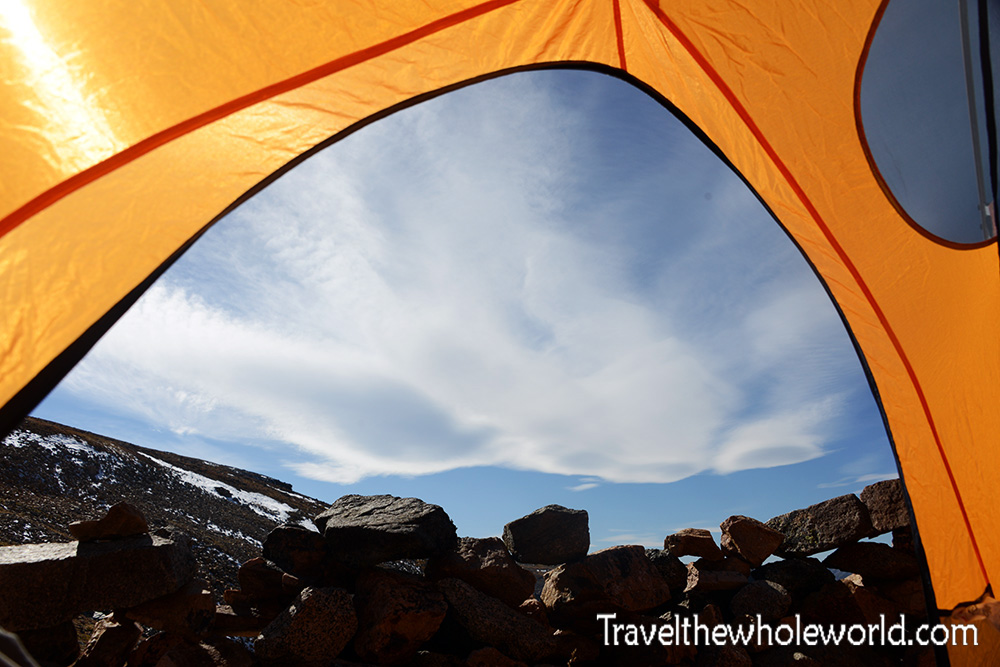 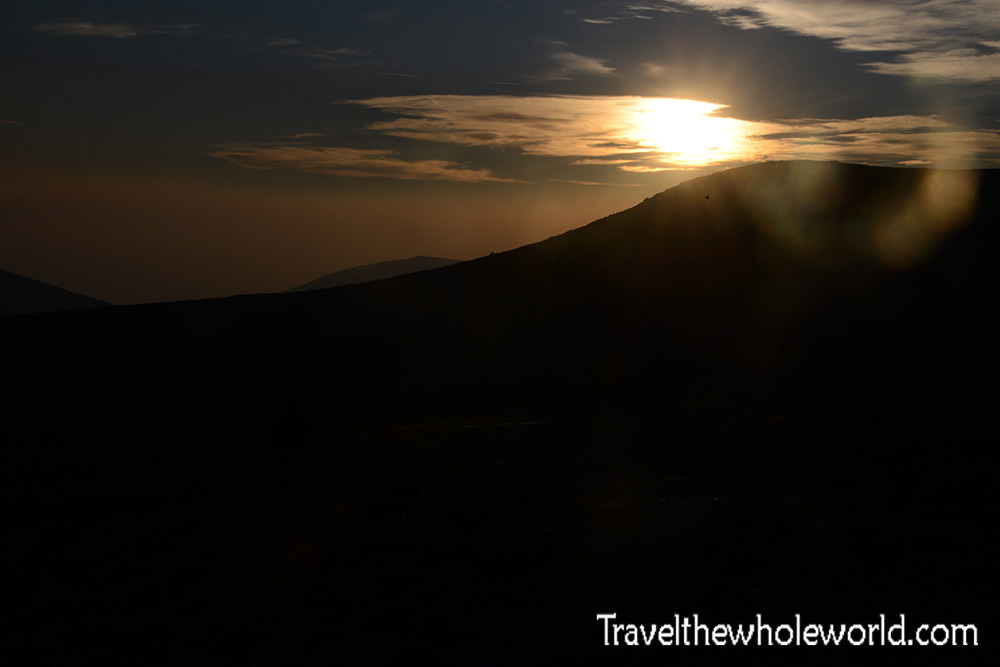 At midnight, my friend and I were woken up by voices and head lamps passing our tent. When we descended later in the day the camp we had scene just below the plateau was empty, so that camp had definitely belonged to the two guys passing at night. I’ve no idea what they were doing that their hike brought them down the plateau at that hour, but we never saw them and got to ask. We got a few more hours of sleep and woke up at 6am to push towards the summit. 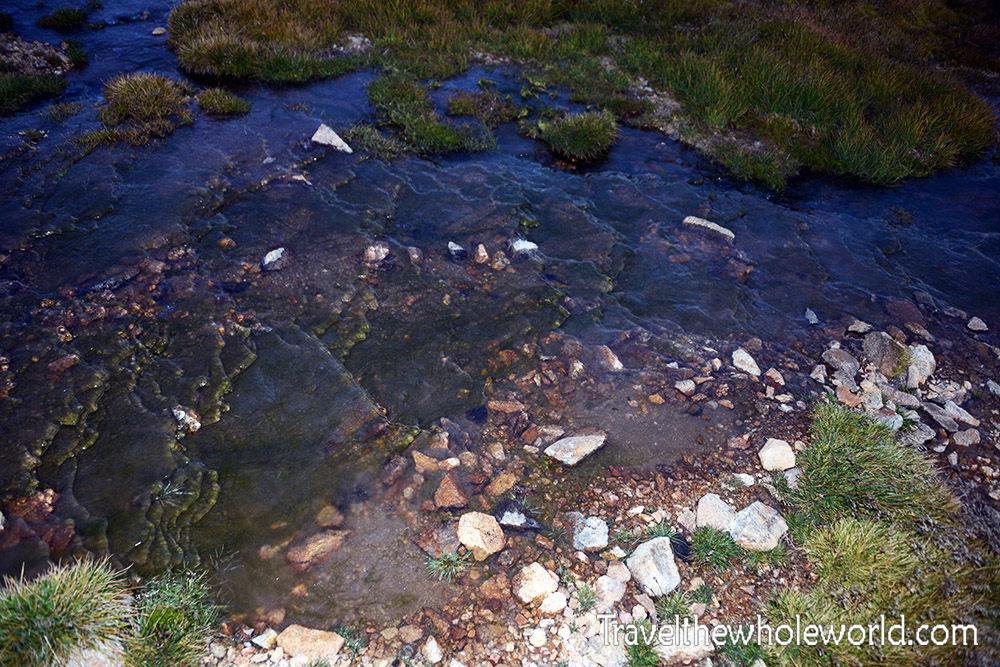 Ice on the ground confirmed that we had had freezing temperatures at night. We had both slept warm since they were barely below freezing, and after hiking with our packs we felt warm. The wind was pretty bad, and had been strong all night. I’d estimate we had 25 mph (40 kph) winds when we began our hike to the ends of the plateau. 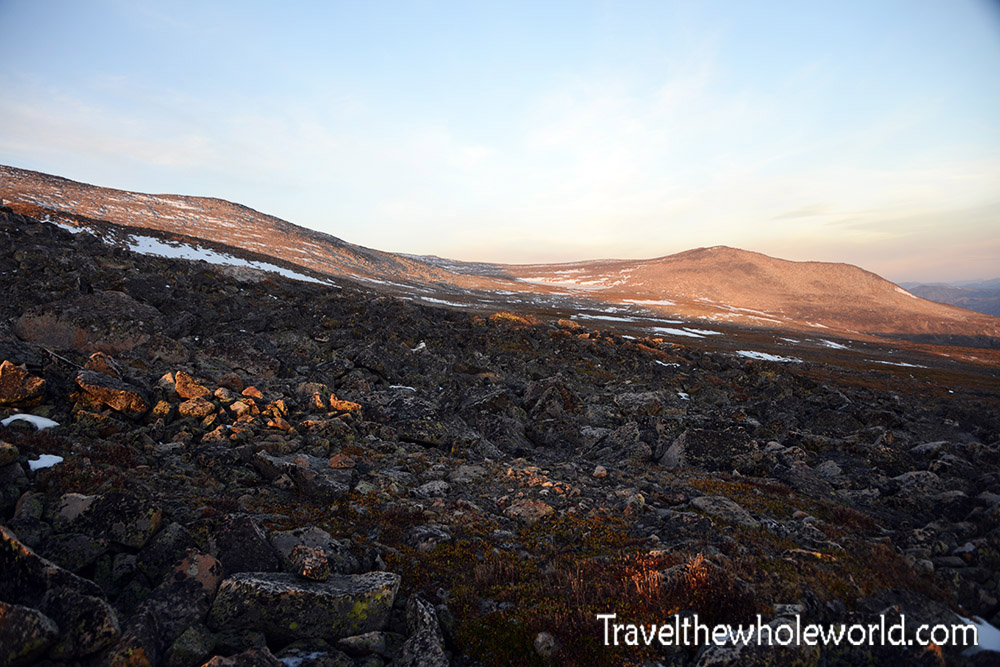 After two hours of hiking, my friend decided to turn around as well and return to camp. He was in incredible shape but had something pulled in his leg the day before and the pain was making each step difficult. I was worried he had pulled a major muscle and would have trouble going down. We made a dangerous decision to split up, with him returning to camp while I’d continue on solo in the freezing temperatures and brutal winds. I wasn’t confident with our decision, and I even told him, “This is how people die in the mountains”. 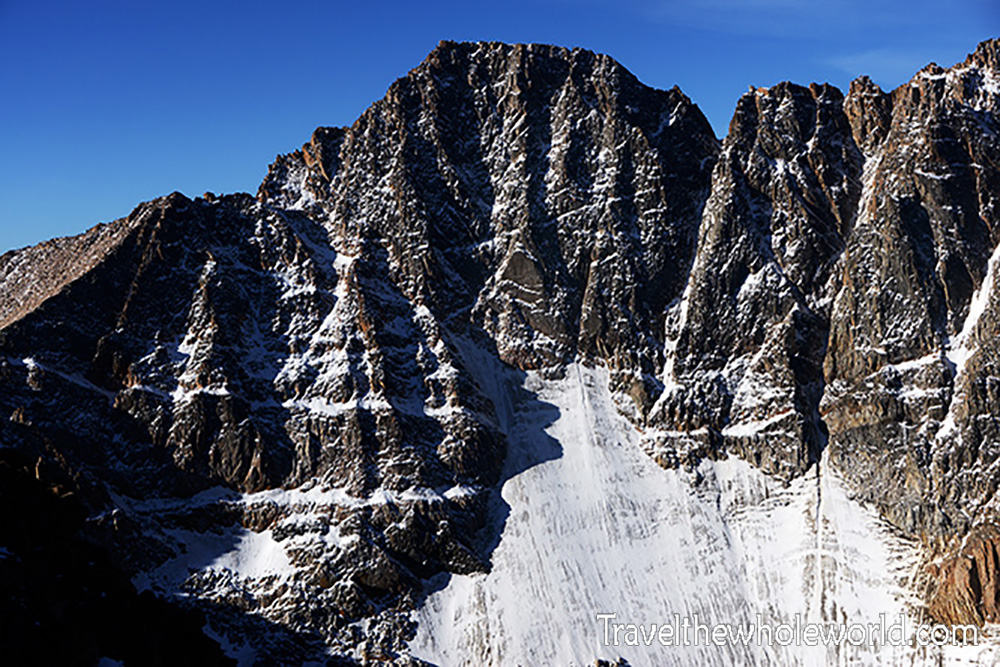 Since Granite Peak is a technical climb, I knew there was no way I’d attempt to summit it alone. I had 200 feet (60 meters) of rope, climbing nuts, pickets, slings, and just about everything I’d need to do it. It was a bit tempting, so I figured that I’d at least look at the mountain and make an assessment on how difficult it might be. After reaching the end of Froze to Death Plateau, I finally got a view of Granite Peak. The mountain is only 12,800 feet (3,904 meters), but appears as a giant deadly mountain in the Beartooth wilderness. Despite it’s relatively low height, it’s actually considered the most difficult state highest point in the continental United States! As I approached a cliff to get a better view, I encountered 50 mph (80 kph) winds that seriously knocked me down a few times. Even if the three of us had been up here and felt like a million dollars, there was absolutely no way to attempt the climb in these conditions! We all returned back out of the wilderness safely, and each of us vowed to return to Granite Peak!