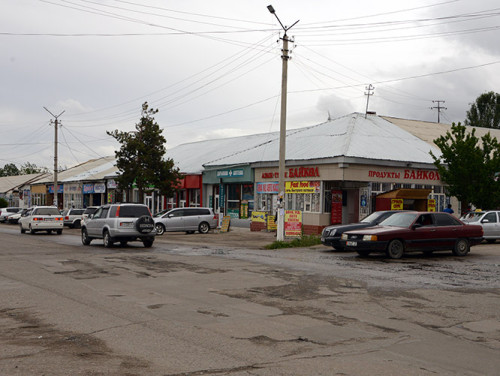 These were my first impressions of Karakol while driving into the small city. It’s not too much to look at, but if you look around there are a few interesting places and it has some interesting history. The city was founded by the Soviet Union, and was primarily comprised of Russians. 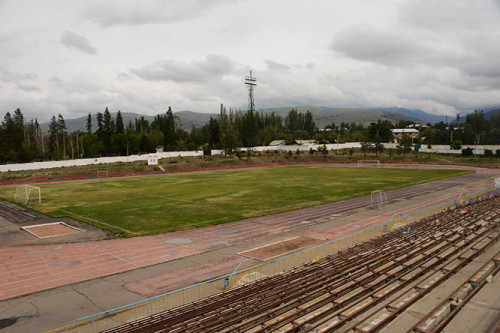 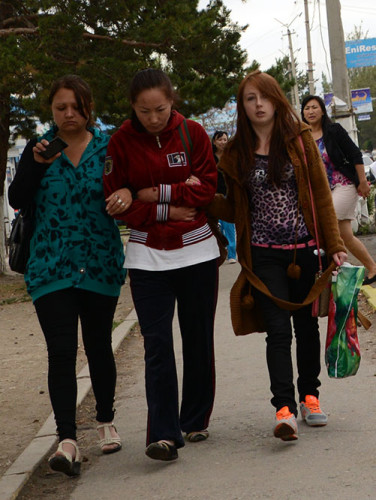 Today there are lots of Russians still remaining, but mostly the ethnic Kyrgyz population is by far the majority. I asked why this changed and his explanation was that after the Soviet Union collapsed, many young Russians ended up going back to their country for school and ended up staying. On the left is a photo of the city’s stadium and some locals on the right. Below are two photos that show the Soviet style block apartments as well as the more traditional Russian houses that are all over the city. 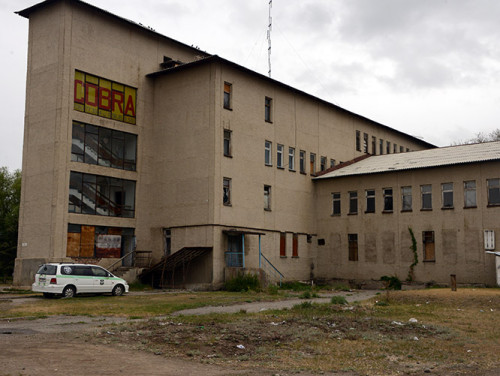 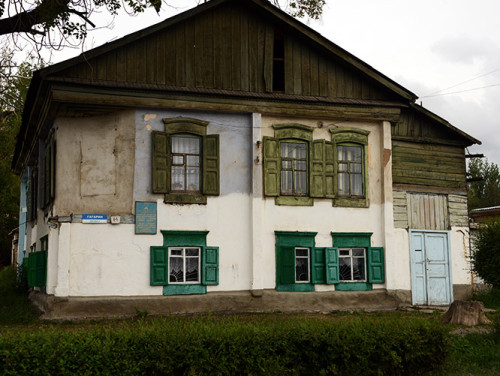 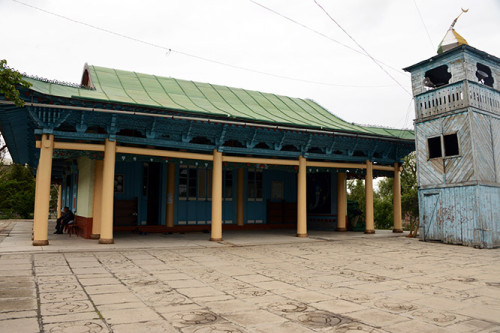 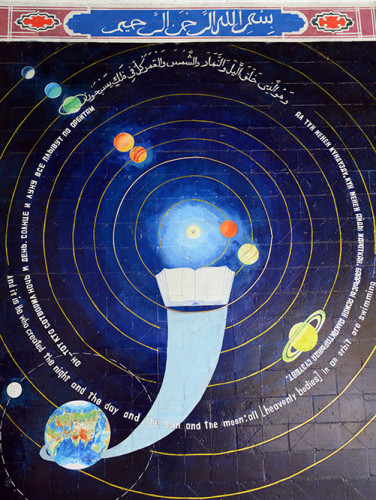 Something I learned while in Kyrgyzstan was more about the Dungan people. This is a loose term that is applied to those of Chinese decent or who live in former Soviet countries and are Muslim. In total, there are only about 100,000 Dungan people, with 60,000 of them in Kyrgyzstan alone. Karakol is known for its Dungan Mosque, also called the Chinese Mosque that was built in 1910. The mosque is unique because of its mix of other cultures and even religions. It has an obvious Chinese design and was built without nails. Instead of an Islamic minaret it has a Buddhist pagoda. I looked inside and was going to take a photo but a local man kindly smiled and waved no. There were lots of signs along the wall which included Islamic prayers and even this drawing of the universe. Most were in Russian or Kyrgyz so I couldn’t understand though. 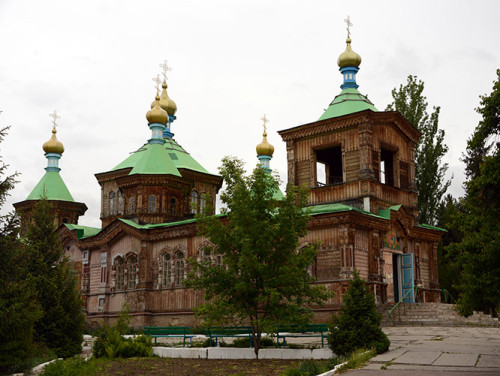 The other important religious building is this Russian Orthodox Trinity Cathedral. The cathedral was built in 1895 and like its Muslim counterpart, it was completely built out of wood without the use of nails. The building was even used as a military officer’s club during the Soviet Union, but was restored to the Russian Orthodox church in the 1990s. When I visited I couldn’t go inside because there was a large service going on. 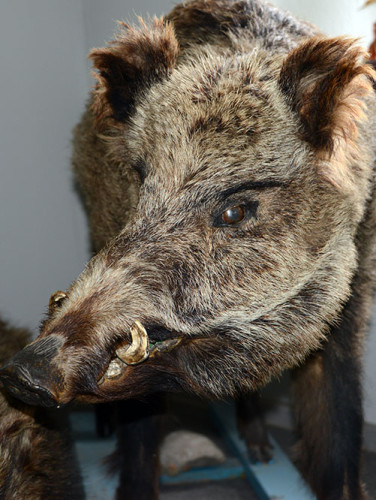 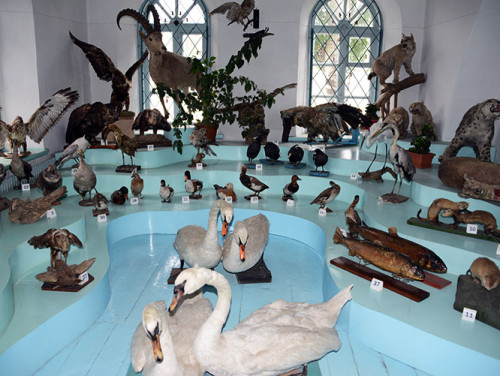 The most important thing I missed out on in Karakol was the grave of the famous Russian explorer Nikolay Przhevalsky. He was known for exploring Central Asia during the late 1800s. As a matter of fact, the original name of the city of Karakol was named Przhevalsky in his honor! He became sick during an expedition and before he died asked to be buried by the lake. There is also a small museum for him that is also dedicated to other Russian explorers. While I missed his grave and museum, I did make it to the regional museum which was much bigger than I expected. They had lots of local animals on display from leopards and boars to everyday birds you’ll see while hiking. 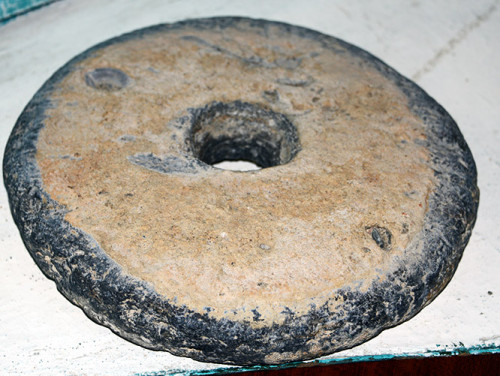 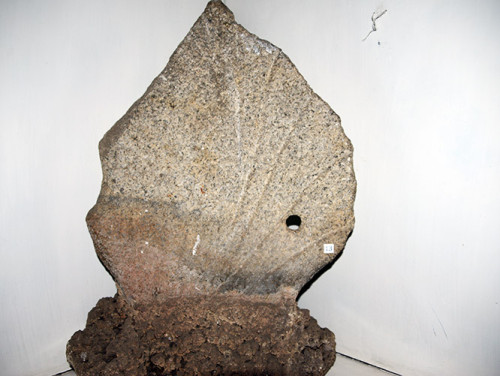 Something I’ve always been fascinated by are the former cities now underwater in Lake Issyk Kul. The water levels of the lake have gone up and down over the centuries, and supposedly there is a city or two that is completely submerged. The lake has an incredible maximum depth of 2,192 feet (668 meters)! Occasionally ancient artifacts are found along the shores and some are on display in this museum. Above are two items recovered from the lost cities of Lake Issyk Kul. 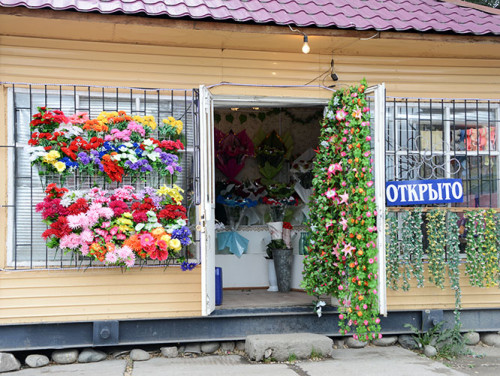 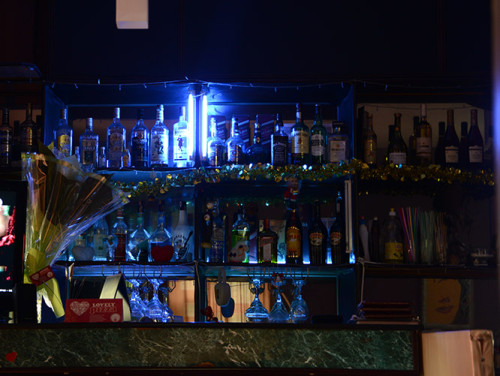 I don’t think Karakol is any place most travelers would spend a good bit of time. It’s a great place to base yourself for trips to the nearby Tian Shan mountains, but otherwise a few days in the city is more than enough. Above is a flower shop and a small bar that was part of a popular pizza restaurant here. I’m not aware of any night life available in Karakol but there are definitely plenty of places to buy alcohol! 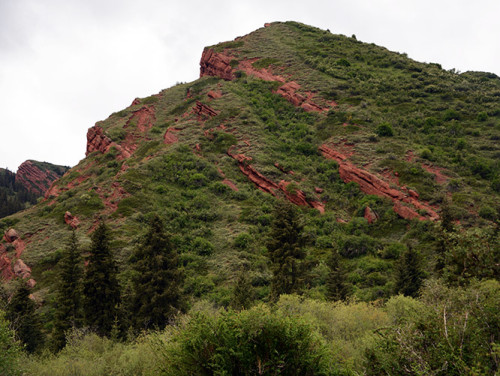 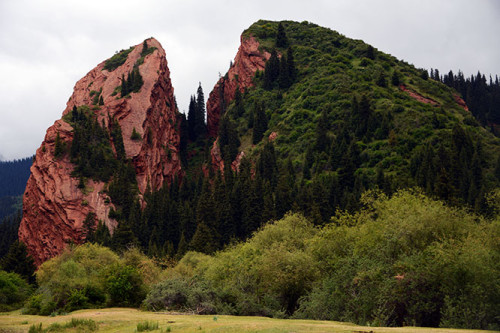 An interesting place nearly all travelers in Karakol visit is the famous Broken Heart mountain photographed on the right. You can tell the terrain is different as you approach the mountains. The dark green vegetation gives way to brightly colored red rocks. 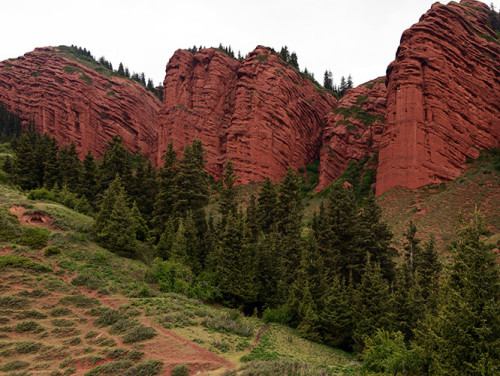 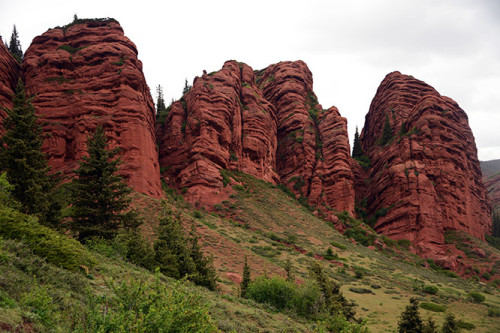 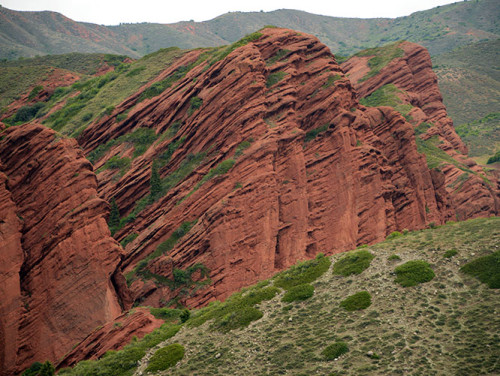 Immediately after the Broken Heart are the famous collection of the Jeti-Oguz Rocks. They say there are Seven rock towers which I have above in two separate photos. I made the mistake of not photographing the entire thing because I was trying to avoid some local buildings at the foundation of the mountains. There isn’t much hiking to do directly on the Jeti-Oguz Rocks, but I’ve heard that people often rock climb these things. I would have loved to do that myself as I just started to spend a lot of time rock climbing indoors, and getting outside is what you practice for. 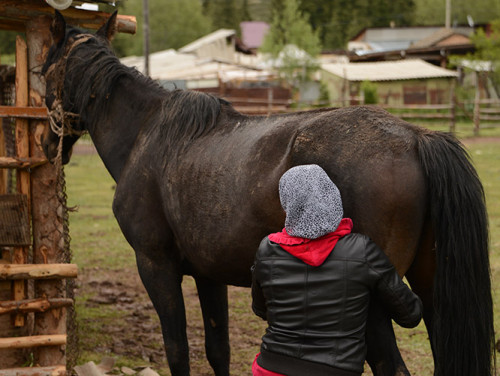 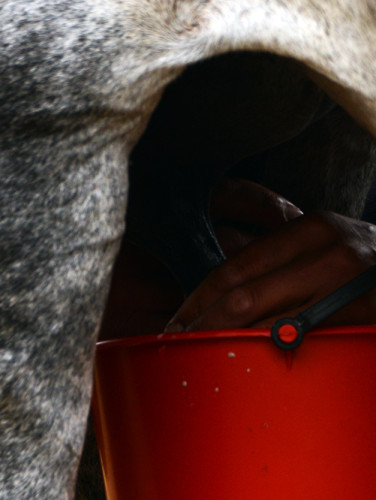 These last random photos happened on my way back from the Jeti-Oguz Rocks. I came across several people milking their horses. I had already tried fermented mare’s milk on this trip. I can say I wasn’t a fan of the drink, and after watching the milking process it appealed to me even less. The drinks are very expensive by Kyrgyz standards and cost several dollars for a single cup.